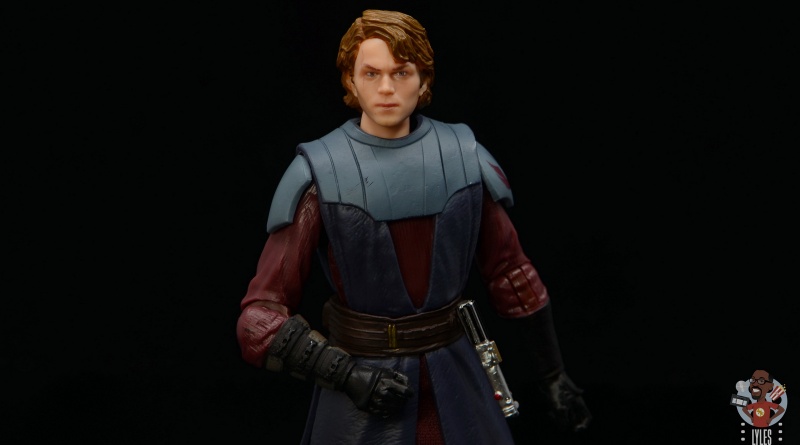 I don’t need much of a reason to revisit The Clone Wars.  I was more than happy doing “research” for the Star Wars The Black Series Clone Wars Anakin Skywalker figure, which quickly became an extended binge session.

But as my raised in the 80s mindset reinforces — see something cool, want a figure for it. Thankfully tracking down the figure this time wasn’t too hard even for a Target exclusive. Anakin is the main hero of the prequel saga, but it’s the Clone Wars where he really gets fully developed into the tragic character that falls midway through Revenge of the Sith.

I was thrilled Hasbro decided to knock out the first half of the Clone Wars look for Anakin as it’s become one of my favorite variant looks for him. Let’s see if this figure is the chosen one as well.

Packaging: It’s hard not to appreciate the unique nature of this packaging. It’s shaped like an original Clone trooper helmet that showcases the figure nice and is a standout piece for MOC collectors. 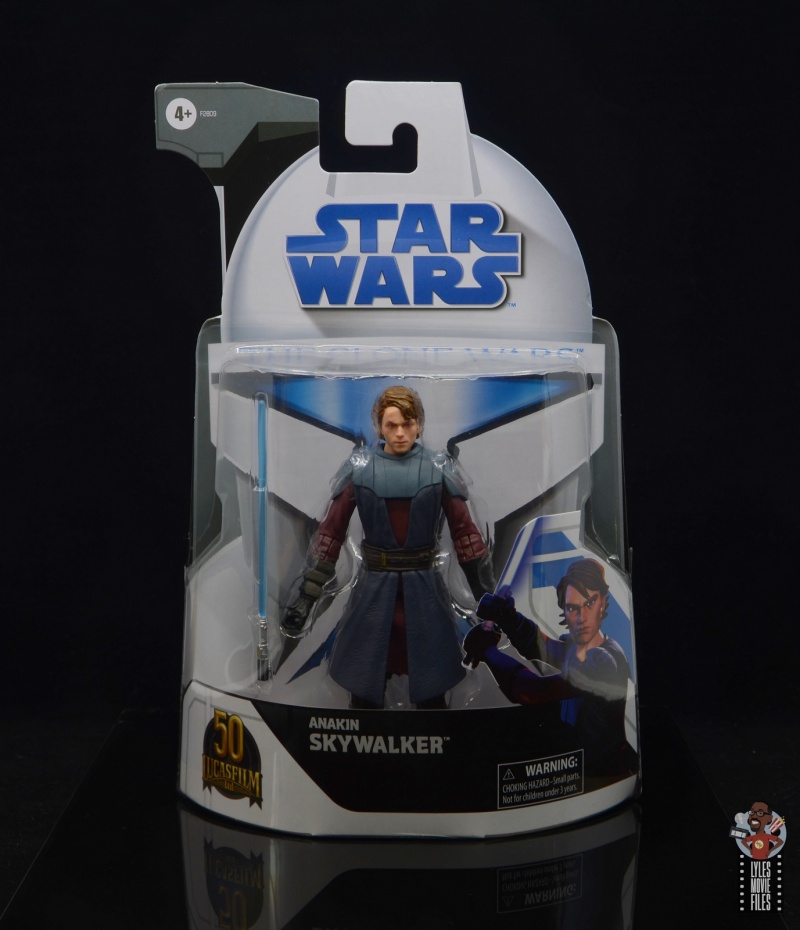 We get some cool reference art from the show although it’s odd Hasbro didn’t go with some sort of mock up like they’ve done with previous animated characters done in the realistic Black Series style.

The back is surprisingly sparse with no bio or even saying what other figures are available in this 50th anniversary Lucasfilm Ltd wave.

Likeness:  Hayden Christensen is the new Mark Hamill. It seemed like until very recently Hasbro could not get his likeness down. Like son like father I suppose? 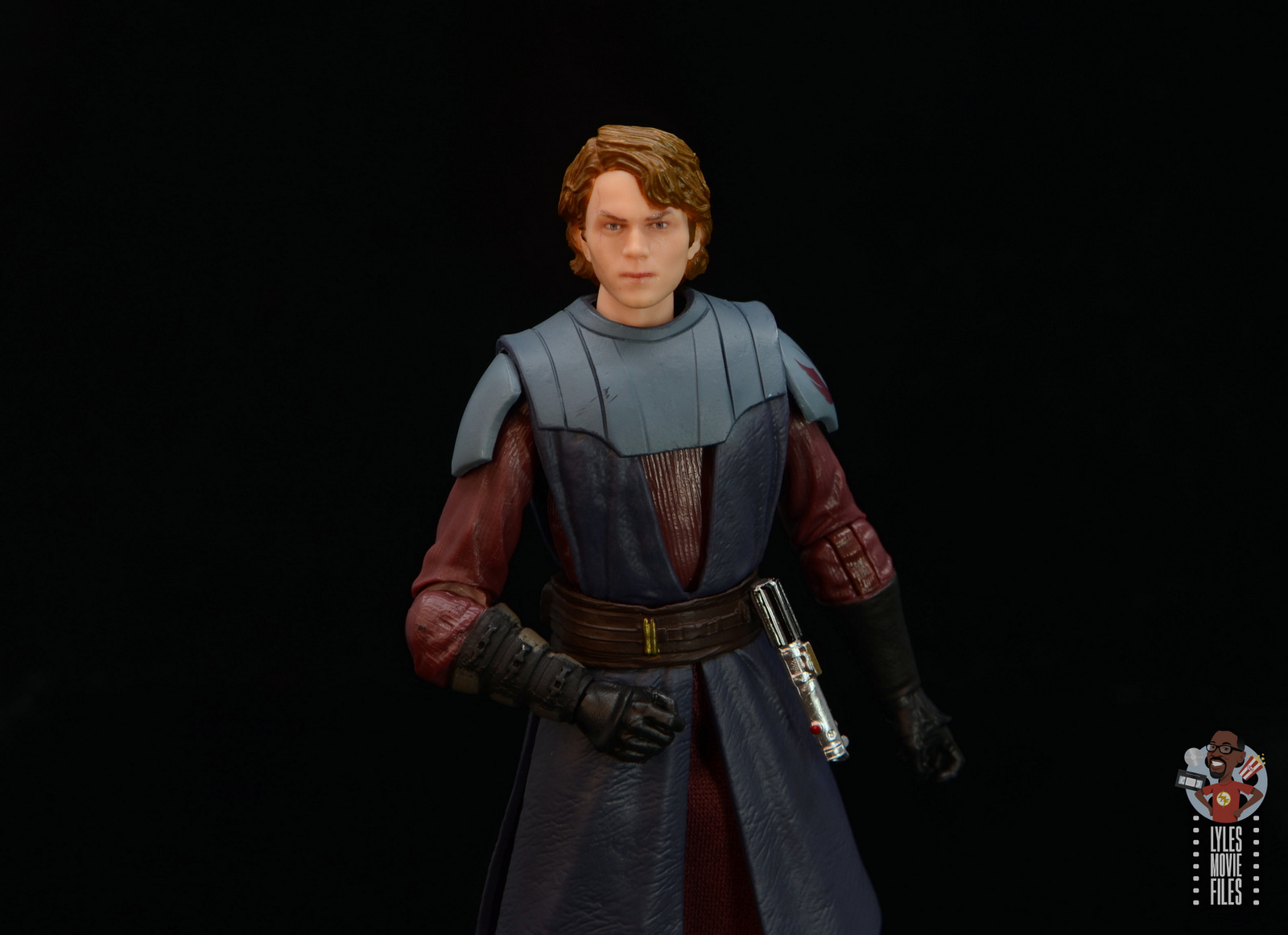 I don’t see much of Hayden in this head sculpt at all although it sorta looks like Anakin if that makes sense? Hasbro has done a better head sculpt with the photo realism take on the Series 3 Anakin sculpt. That probably would have been a better option here. 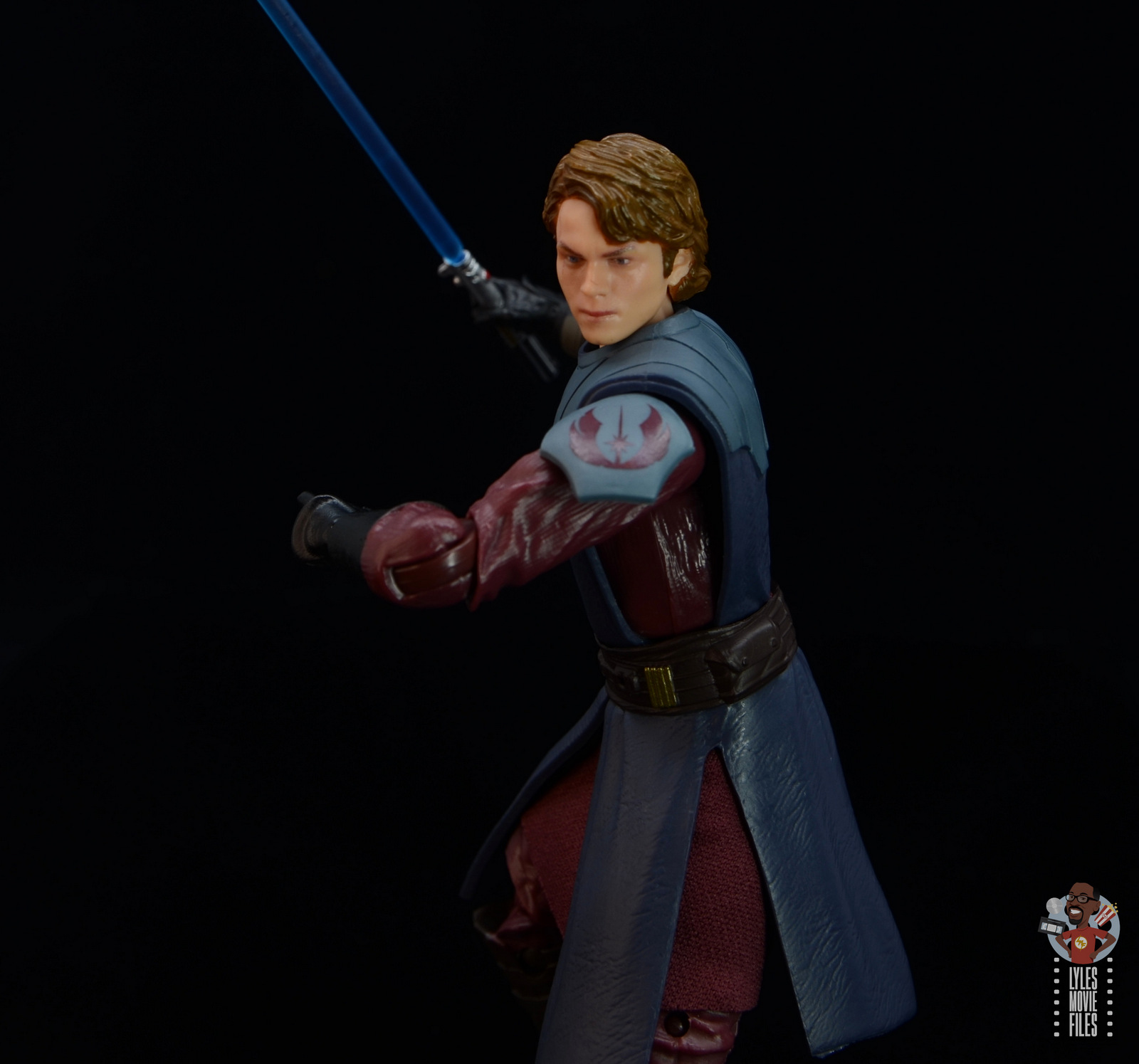 Again the main draw for me here was seeing Anakin in his Clone Wars armor. This design is great as it takes some visual cues from Anakin’s future Darth Vader attire with the shoulder pads and lined chest pad overlaying a tunic. 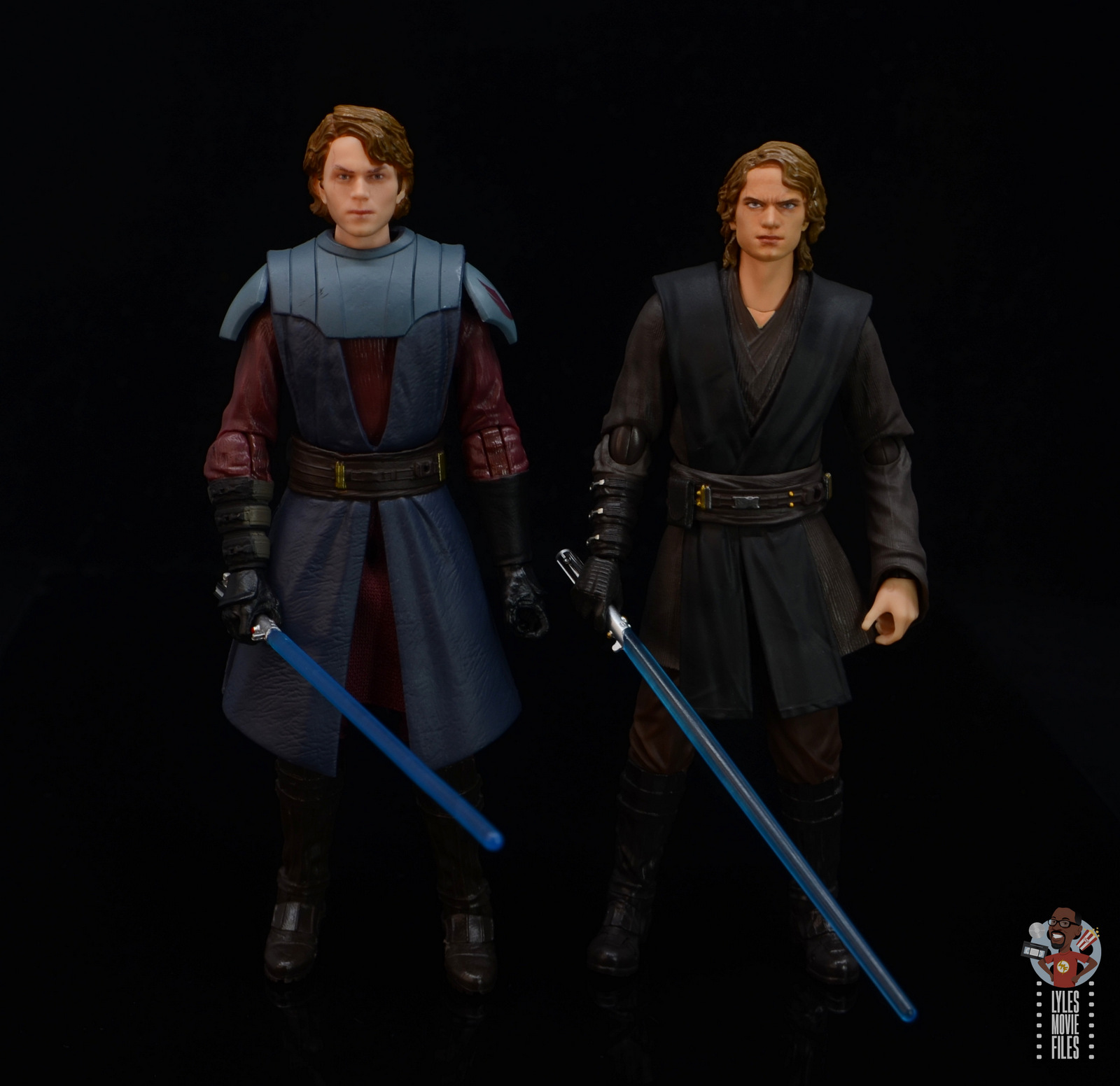 The chest pad has some solid texturing to show a little wear and tear. 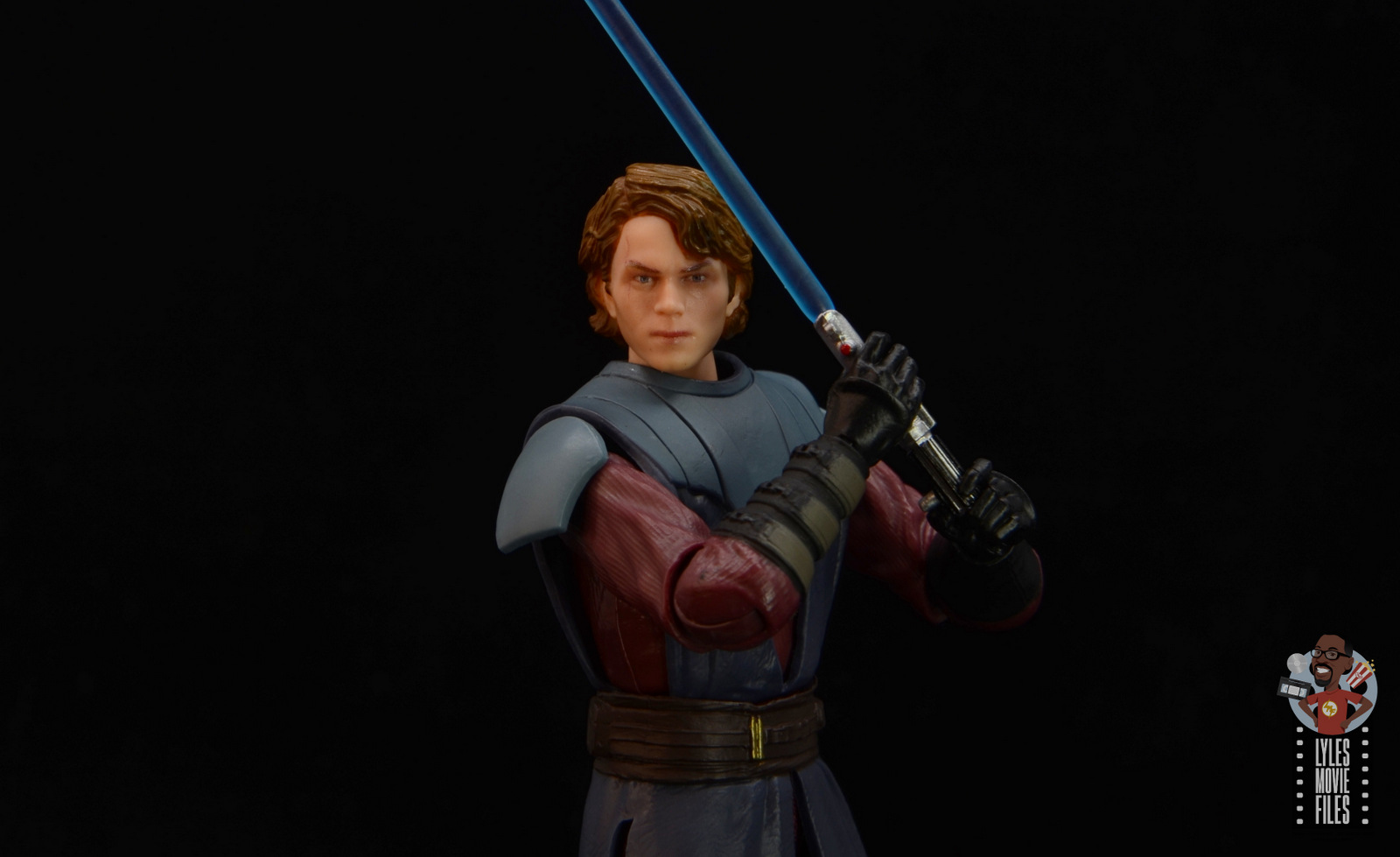 Anakin’s gloved robotic hand has segments compared to the smooth left hand. Unlike the Obi-Wan figure, there are some soft good elements with Anakin’s inner robes. That’s likely included to not hinder his articulation.

Paint:  Anakin’s hair turned out well with a subtle gold wash to break up the brown. There’s just a bit of overspray on his hair into his face although the precise work on his scar makes up for it.

The paintjob also helps to distinguish Anakin’s war attire from the standard Jedi as he’s wearing darker reds and blues compared to the white and tans Jedi normally wore into battle.

This is more subtle visual cues that Anakin had a far different take on war than the other Jedi and wasn’t afraid to get dirty, which wasn’t always aided by a bright outfit. 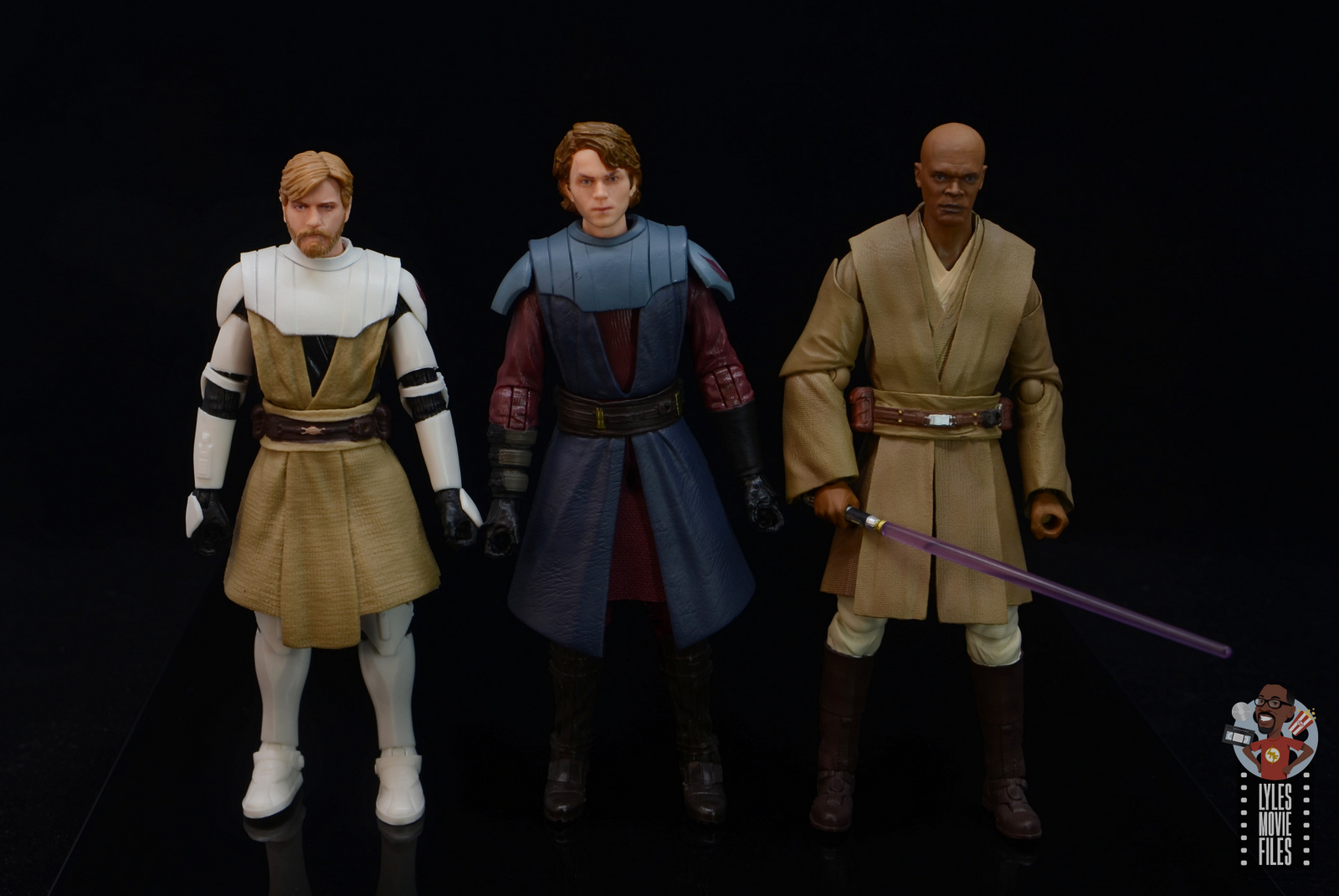 Scale:  Anakin is typically portrayed noticeably taller than Obi-Wan and just a bit shorter than Mace Windu. Hasbro has been very good about scale and Anakin is indeed taller than the CW Obi-Wan. 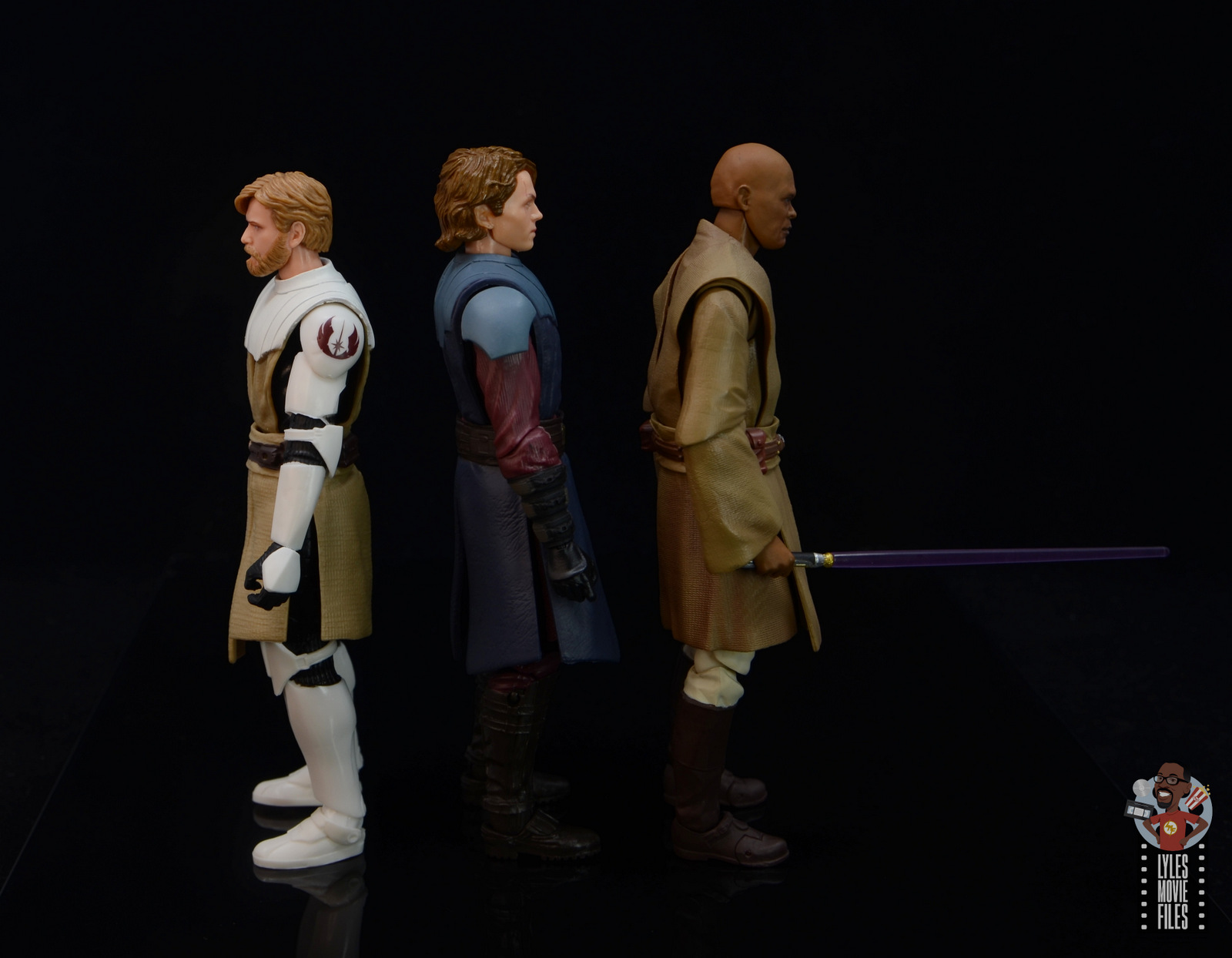 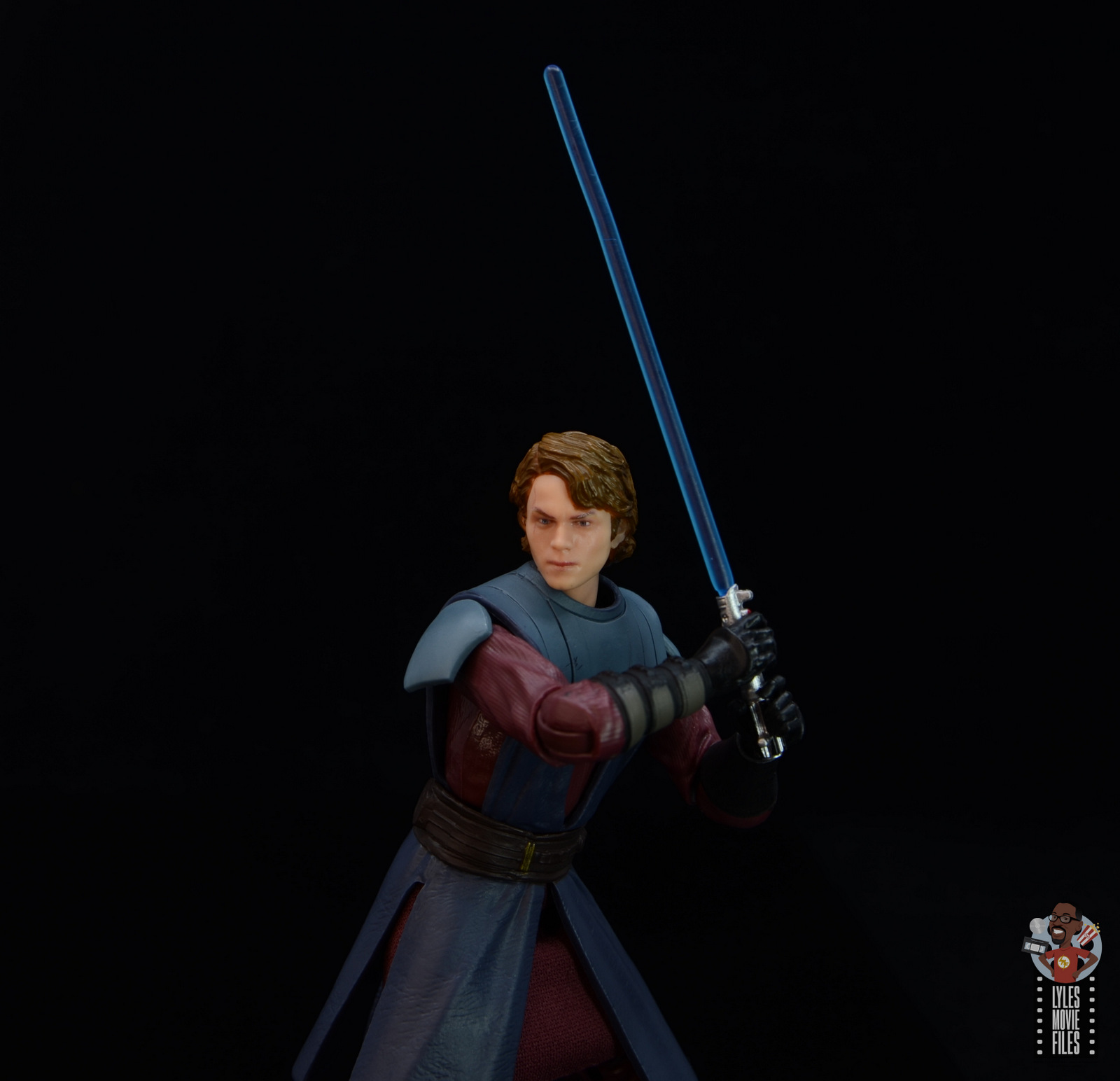 While he lacks double jointed elbows, his range of motion is almost good enough that it’s not noticeable. His knees are double-jointed though my figure has a slightly weak right ankle so I’ll need a little super glue to strengthen it up. 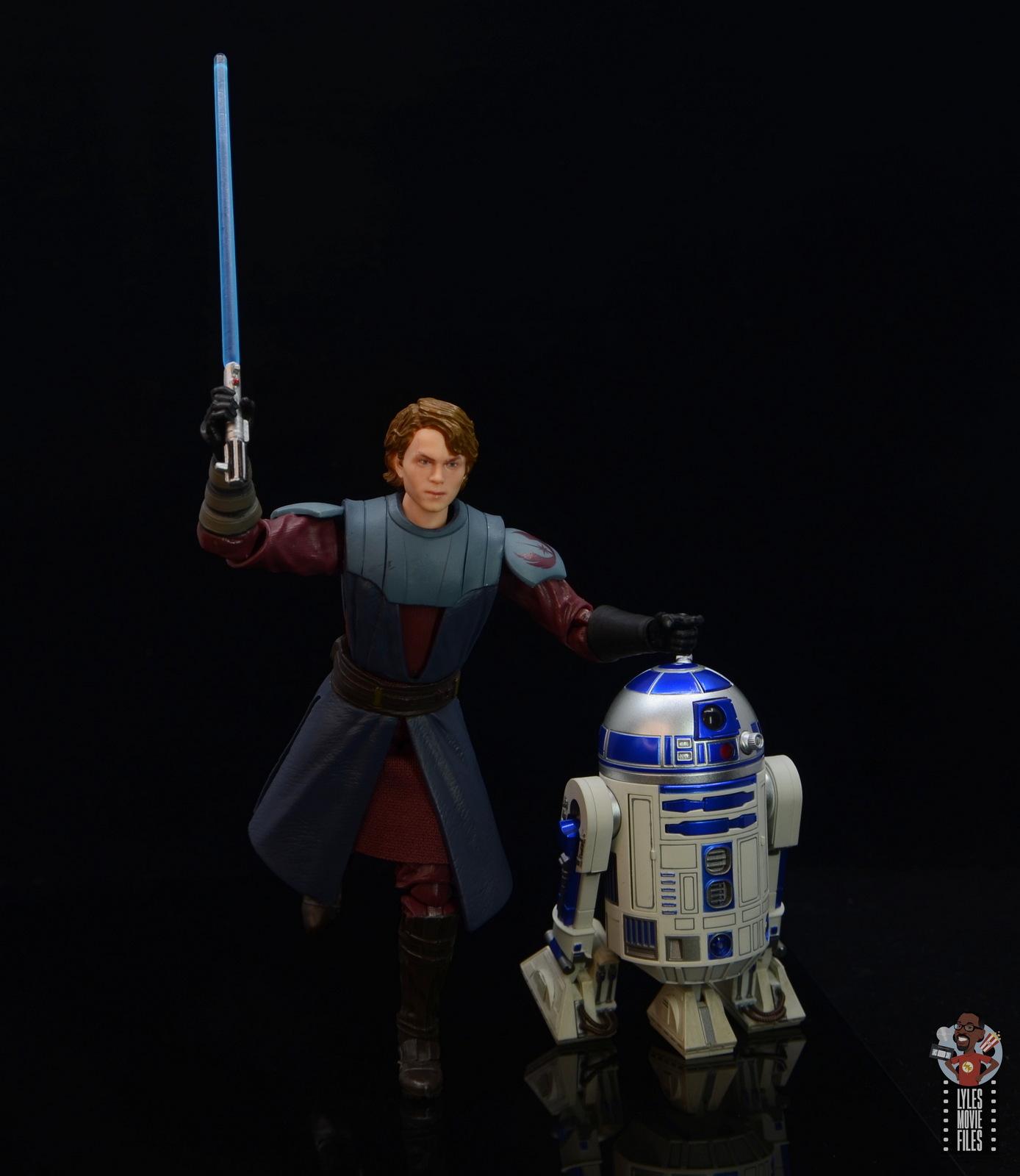 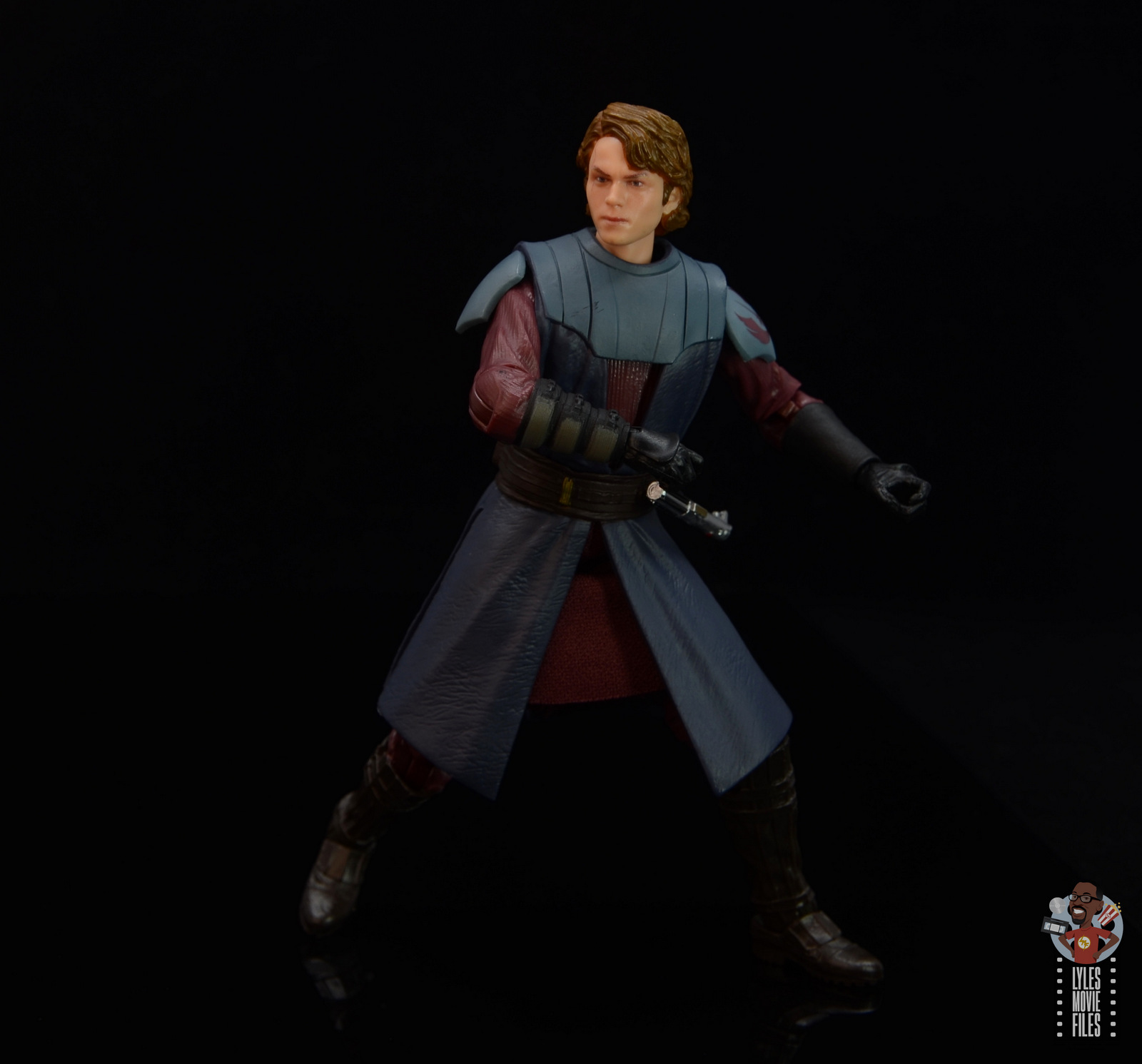 Accessories:  Anakin only comes with his lightsaber. 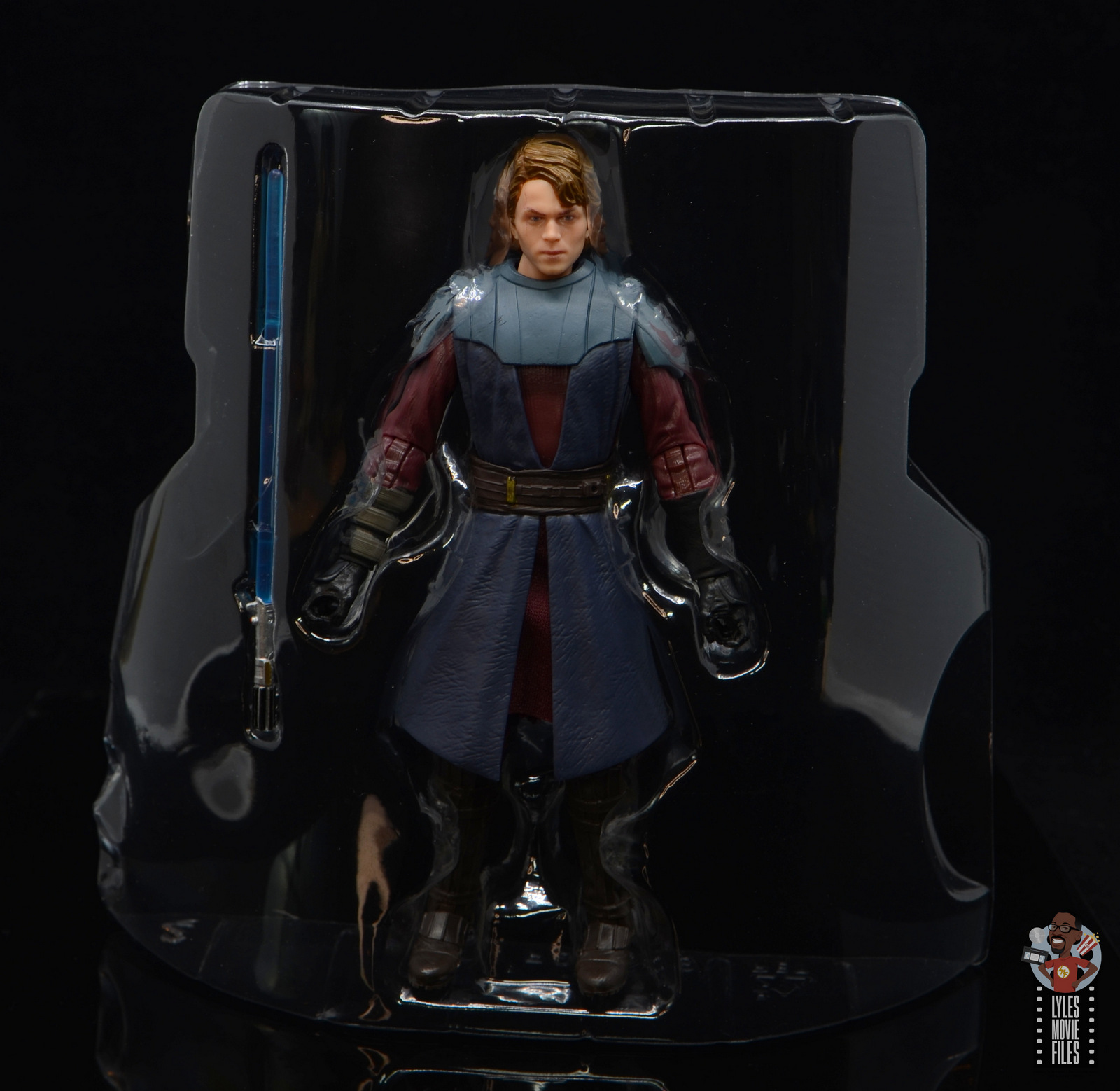 Hasbro should do something to add a bit more value here with some war accessory parts like Separatists battle droid pieces.

Worth it?  This is a standard $20 figure that’s now got a $26 price tag. Not a good bargain Jim. Hasbro’s Marvel Legends team is throwing in more accessories along with the Build-A-Figure parts. Hasbro really needs to find a way to sweeten the deal for Black Series collectors. 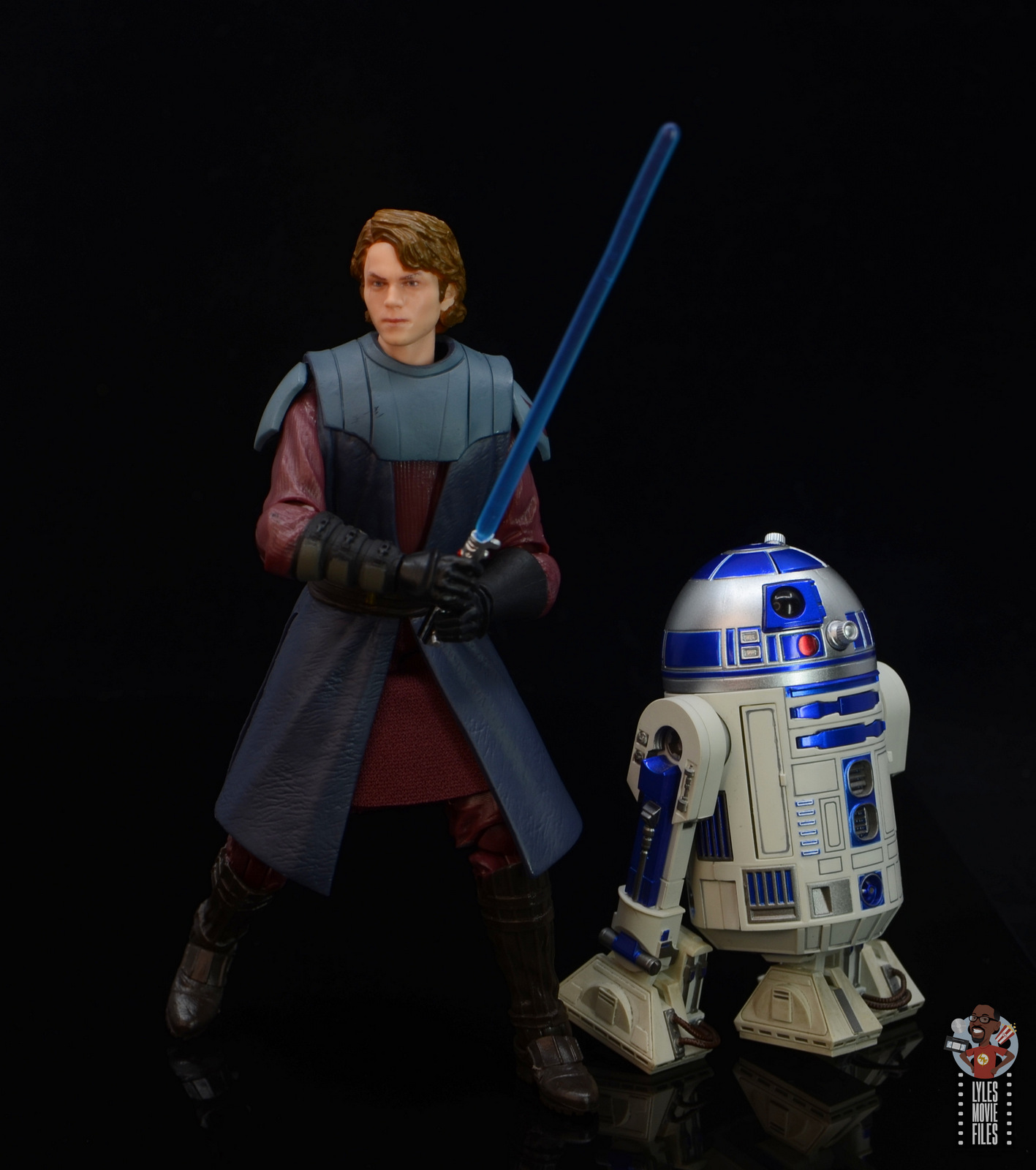 If only the likeness were a little sharper. I still really like this figure and appreciate having a Clone Wars style Anakin and the only thing holding it back is a better head sculpt. Once Hasbro gets around to knocking that out, Anakin is due for an upgrade. 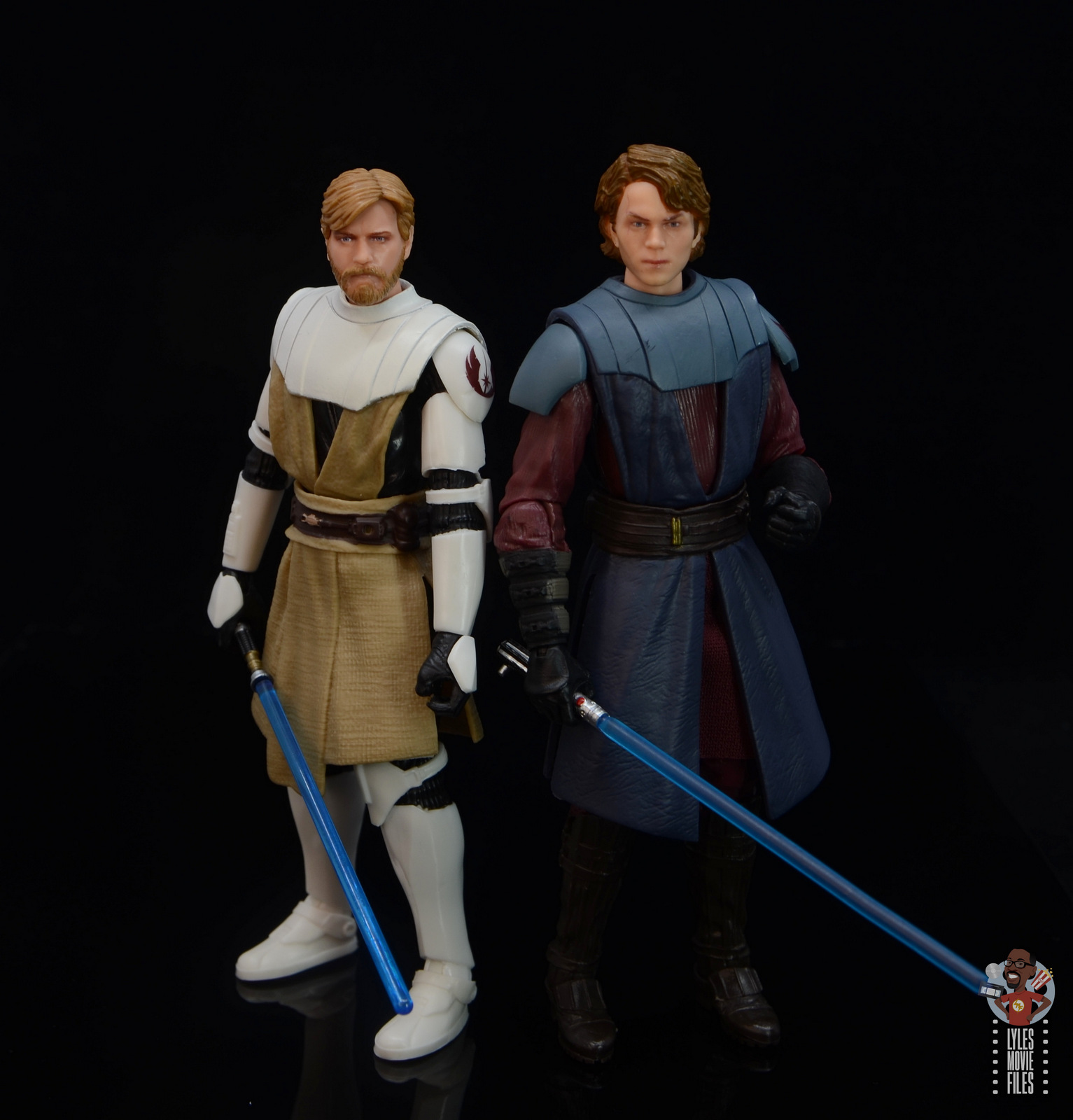 Where to get it?  This series is exclusive to Target, but it seems like each figure is getting a solid case pack. As usual, they’re not going to hang out on the pegs so you should get Anakin as soon as you see him.