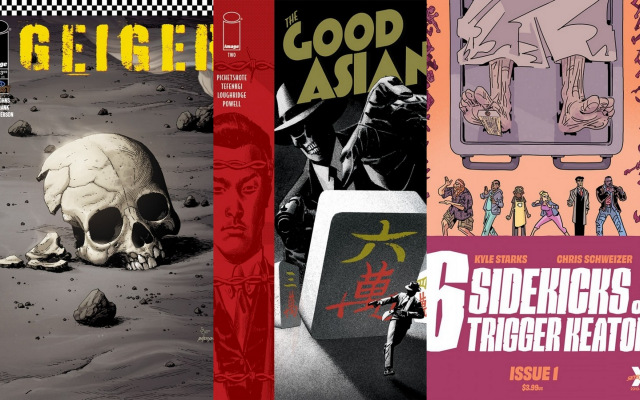 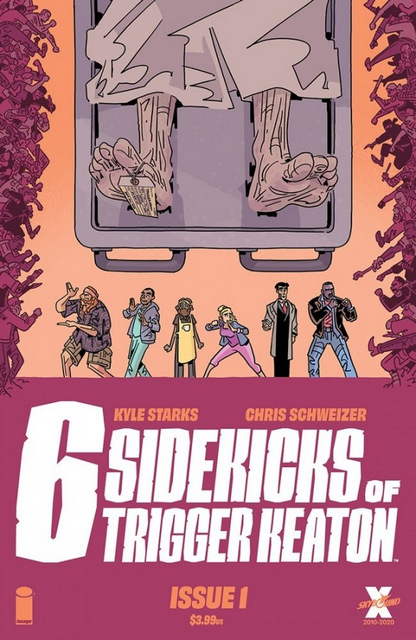 Roaring out the blocks like a comic book equivalent of Knives Out, 6 Sidekicks of Trigger Keaton debuts with the impact of a side kick to the face.

It’s uproariously hilarious and reads like everyone coming to pay their respect to the worst person ever with a spit on his grave.

Trigger Keaton was a megawatt action star who remained a big draw despite being impossible to work with and a prick to everyone else. Maybe Trigger’s biggest legacy was obliterating the careers of his co-stars/sidekicks.

Writer Kyle Starks quickly makes the case why anyone who spent any time with him would want Trigger dead. It’s not exactly shocking when Trigger is found in his trailer presumably after hanging himself. Trigger’s latest sidekick/partner, Miles Ngyuen, isn’t convinced Trigger committed suicide. With the aid of his background research for a police procedural, Miles starts gathering clues that will lead to the real killer.

Along the way, Miles encounters the other sidekicks, most of whom have struggled to get their lives on track after Trigger derailed their acting hopes.

Starks’ dialogue is snappy with a genuine real world feel to it. Every character doesn’t sound like they’re vying for the role of funny guy on a show and Starks gives even minor characters enough of a voice to feel authentic.

Chris Schweizer’s art is very stylized and would fit right in with the structure of a newspaper comic strip theme. Schweizer clearly favors a more cartoonish flair, which allows characters to hit certain emotional outbursts that work best in a not as lifelike setting. Liz Trice Schweizer provides coloring assistance to boost the book’s tongue in cheek comedy.

It’s always a treat finding a new series that can be so much fun right away. There’s enough comic books with creators that take everything way too seriously. Give 6 Sidekicks a shot. This could easily be one of 2021’s sleeper hits.