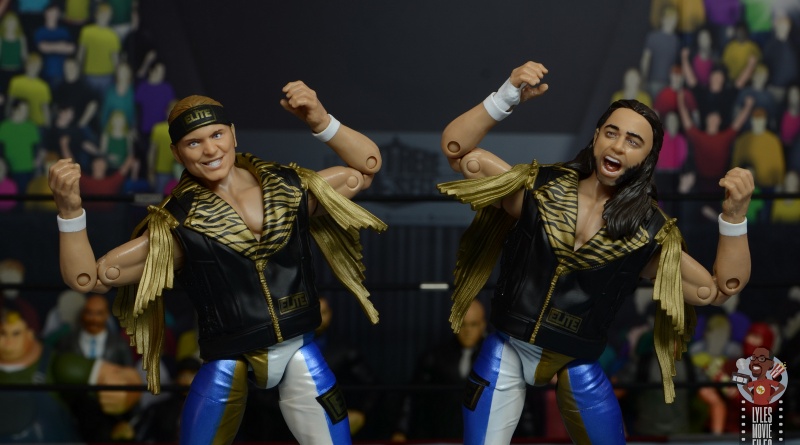 The Young Bucks are a figure license to print money thanks to their diverse attires. Matt and Nick Jackson go months before repeating outfits so Wicked Cool Toys’ Unrivaled line has plenty of options for the Bucks.

Thanks to the shoddy distribution of the first wave, WCT opted to get the initial figures back in rotation quickly so the Bucks get worked into Wave 3. 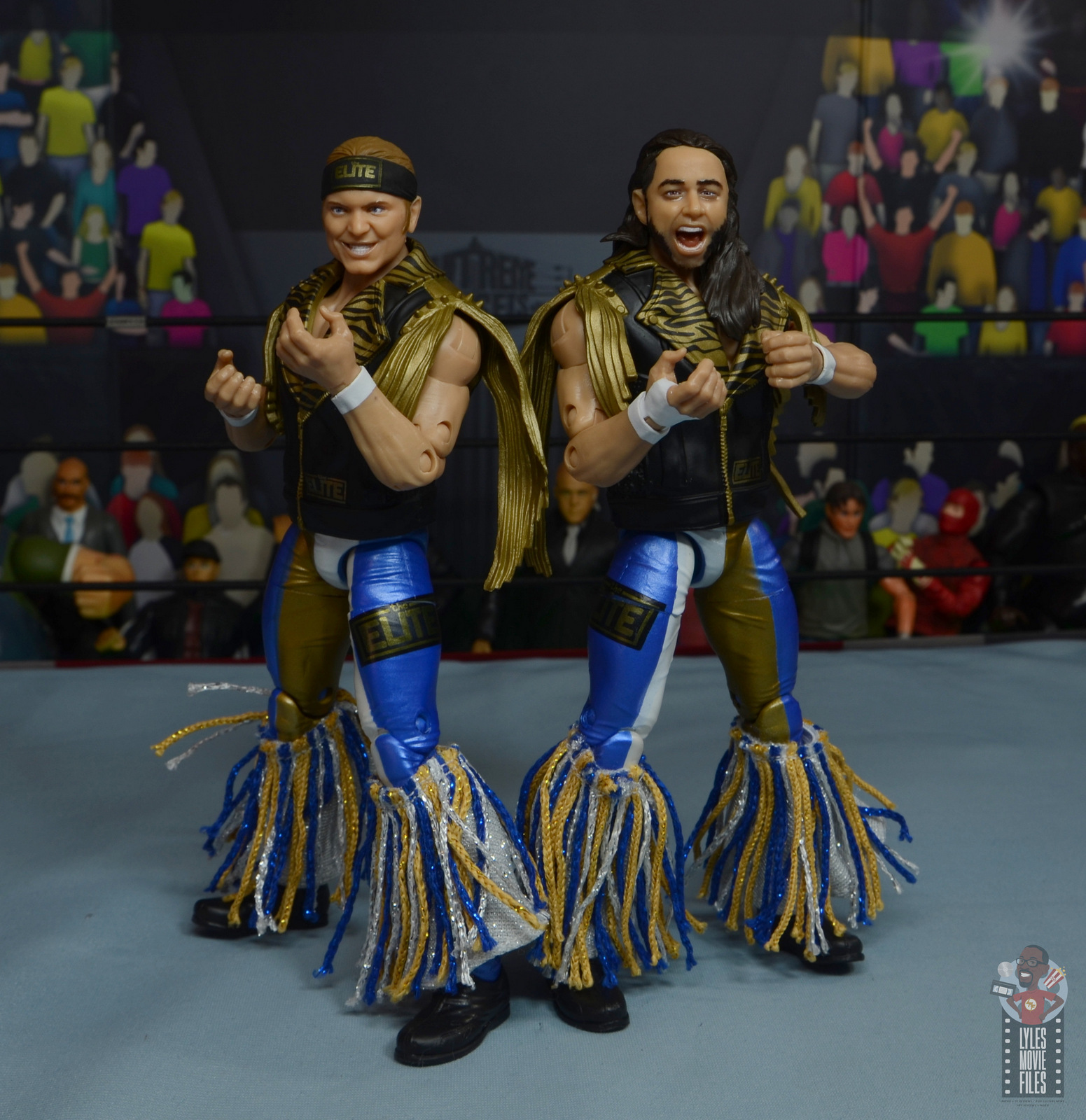 Let’s see if this version of the Bucks is worth the…bucks. OK, I intentionally try to make these puns bad, but I’m wondering if that one is just a little too lazy?

Packaging:  There’s something undeniably Jakks’ Deluxe Classics about this packaging with less effort. The gold foil and black base looks nice, but the lack of personalization specifically a bio makes these look really dated.

I do appreciate the reference photo on the back, which shows exactly how close WCT comes to nailing the likeness. And it’s cool that the Bucks are posed in their signature ring entrance pose.

Likeness:  With the first series, WCT absolutely nailed Matt’s head sculpt. It’s seriously one of my favorite and best likenesses I’ve seen in years as it perfectly captured his attitude and cockiness.  This time…? Not so much.

I get what WCT was going for with the enthusiastic yell, but it’s so moment specific that it only works in certain scenarios. The likeness is pretty close, but the hair is so far back that it gives Matt a six head. 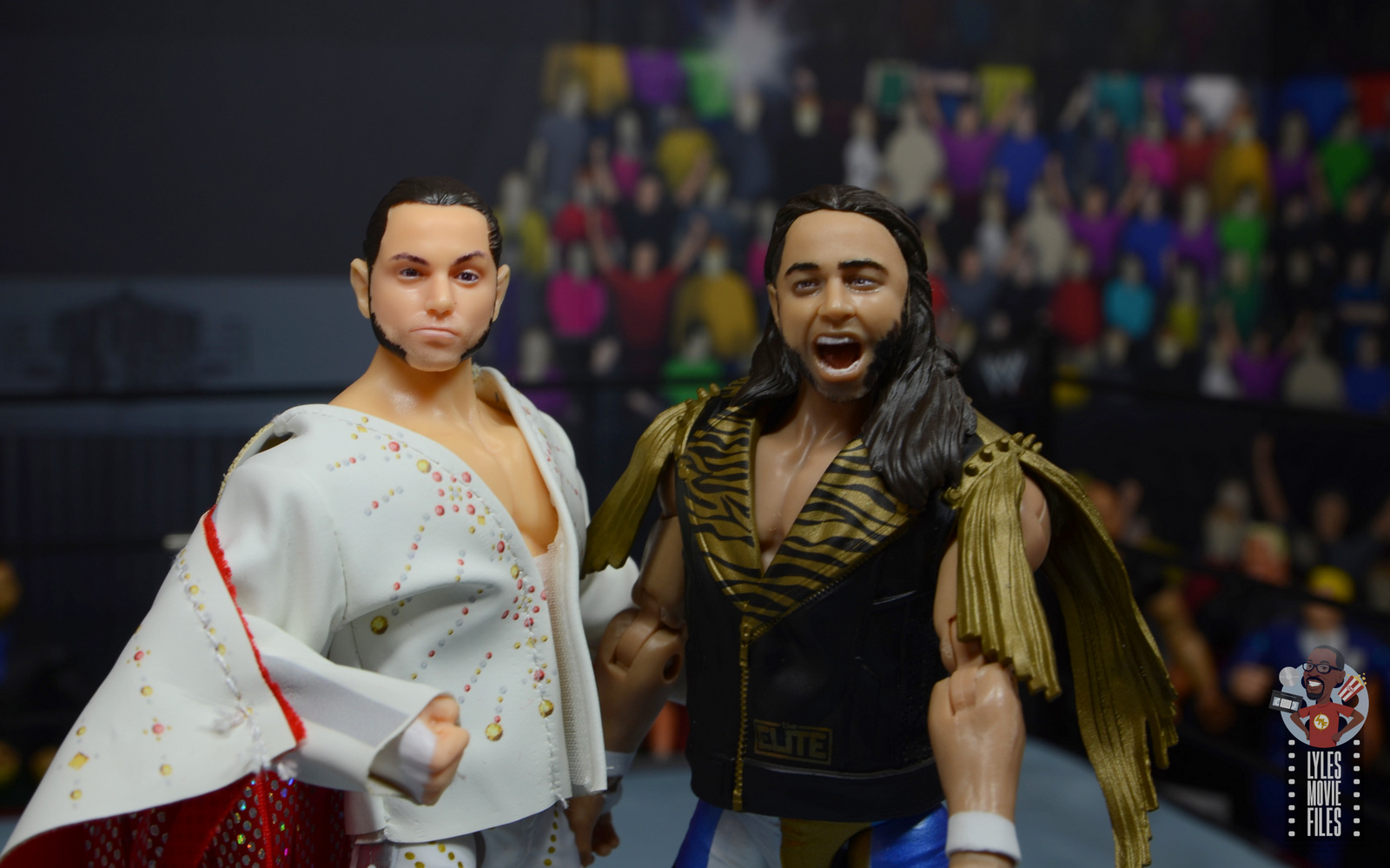 Ironically, last time Nick had the questionable head sculpt, but this one is pretty great. Like the first Matt head sculpt, this conveys his cockiness. It amazes me that AEW had the Bucks as faces instead of heels, but that’s another story. 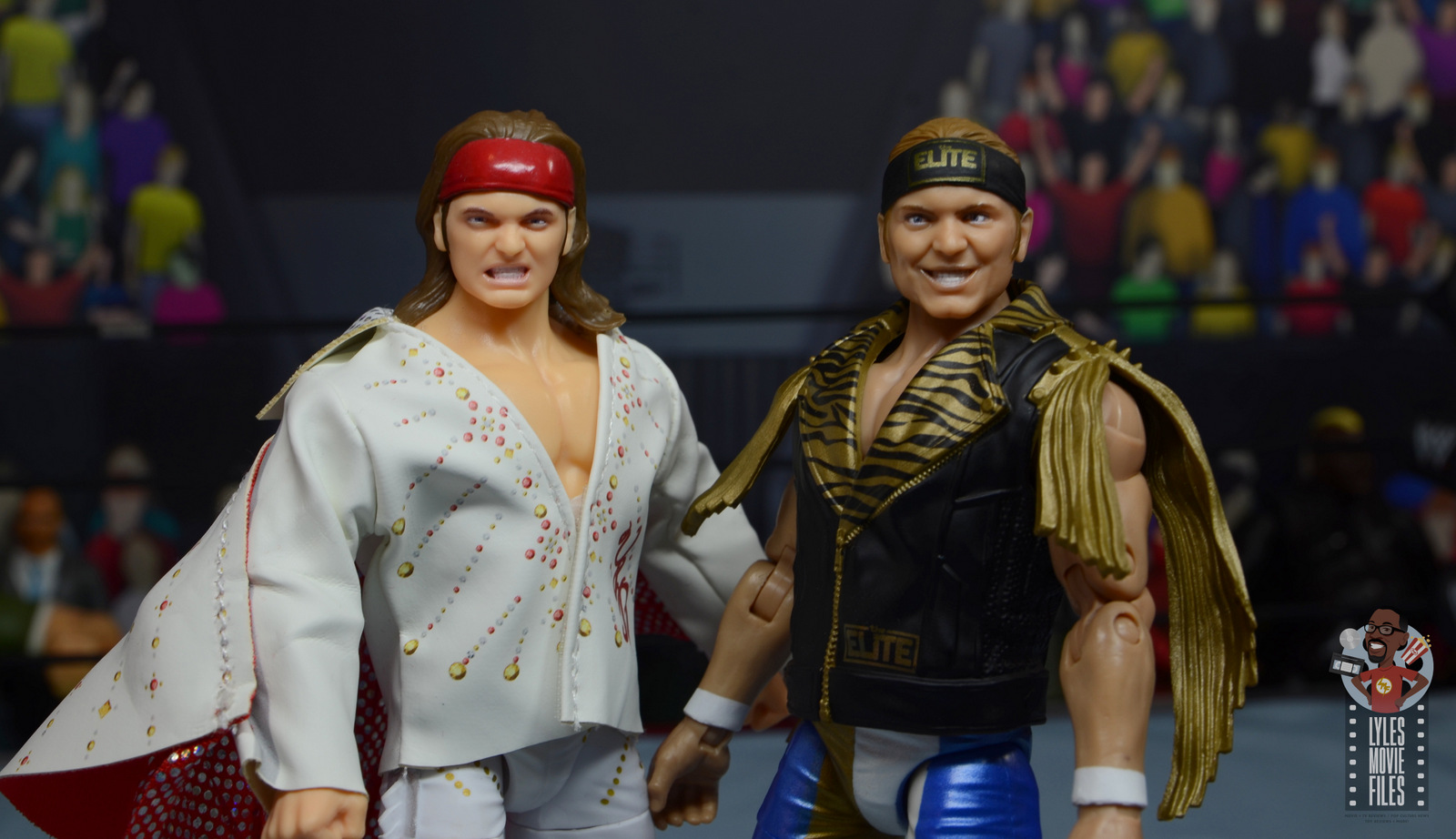 WCT made the right call in sculpting Nick’s head sculpt as it completes the look. We’re just three waves in to the Unrivaled line and already, WCT is putting together some exceptional likenesses.

There’s not a lot of difference on the bodies, which are reused from the first series with one major exception. This attire had fringes at the boot tops and they’re done in cloth compared to the plastic that Mattel typically uses.

I’m not sure if I like how it’s implemented though as there’s a big amount of fabric wrap used to keep the fringes in place. It makes the fringe area look too bulky and it’s hard to keep the area covered with the fringes. 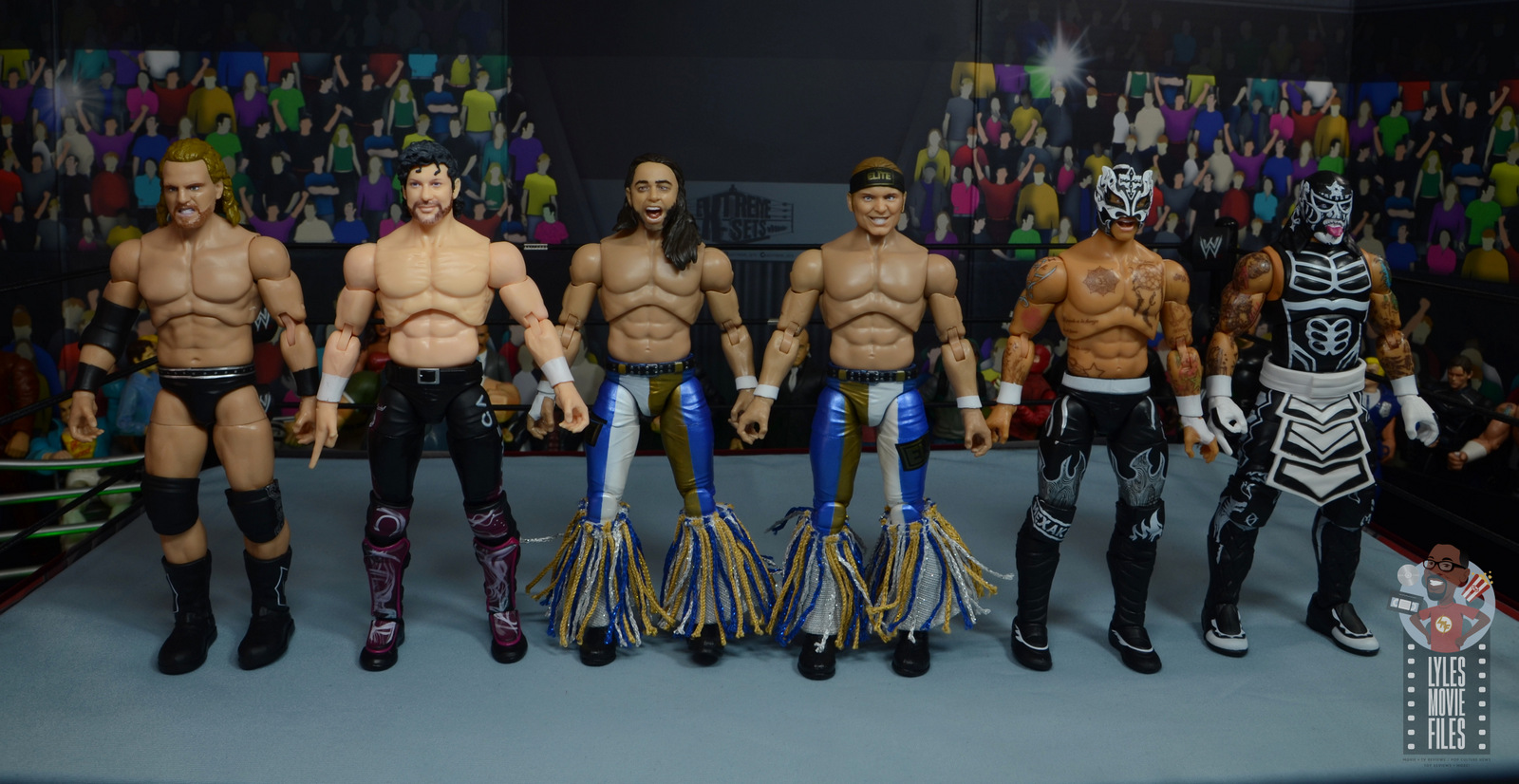 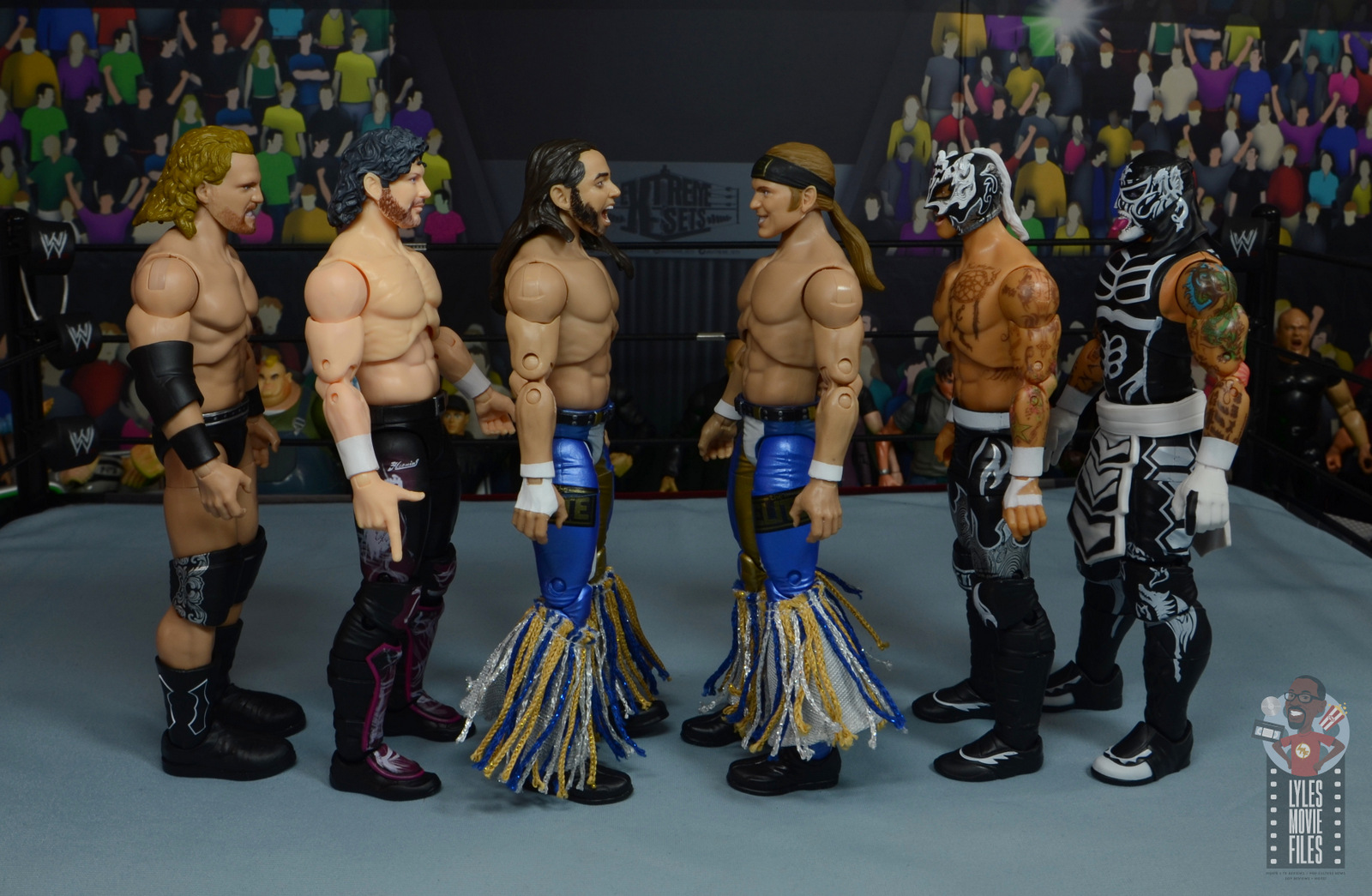 Paint:  Beyond the crappy distribution, Wicked Cool Toys rushed to get the Young Bucks out to fix the ghostly pale skin tone of the first series. For the Bucks it wasn’t terrible so much it was exacerbated by their white tights attire. 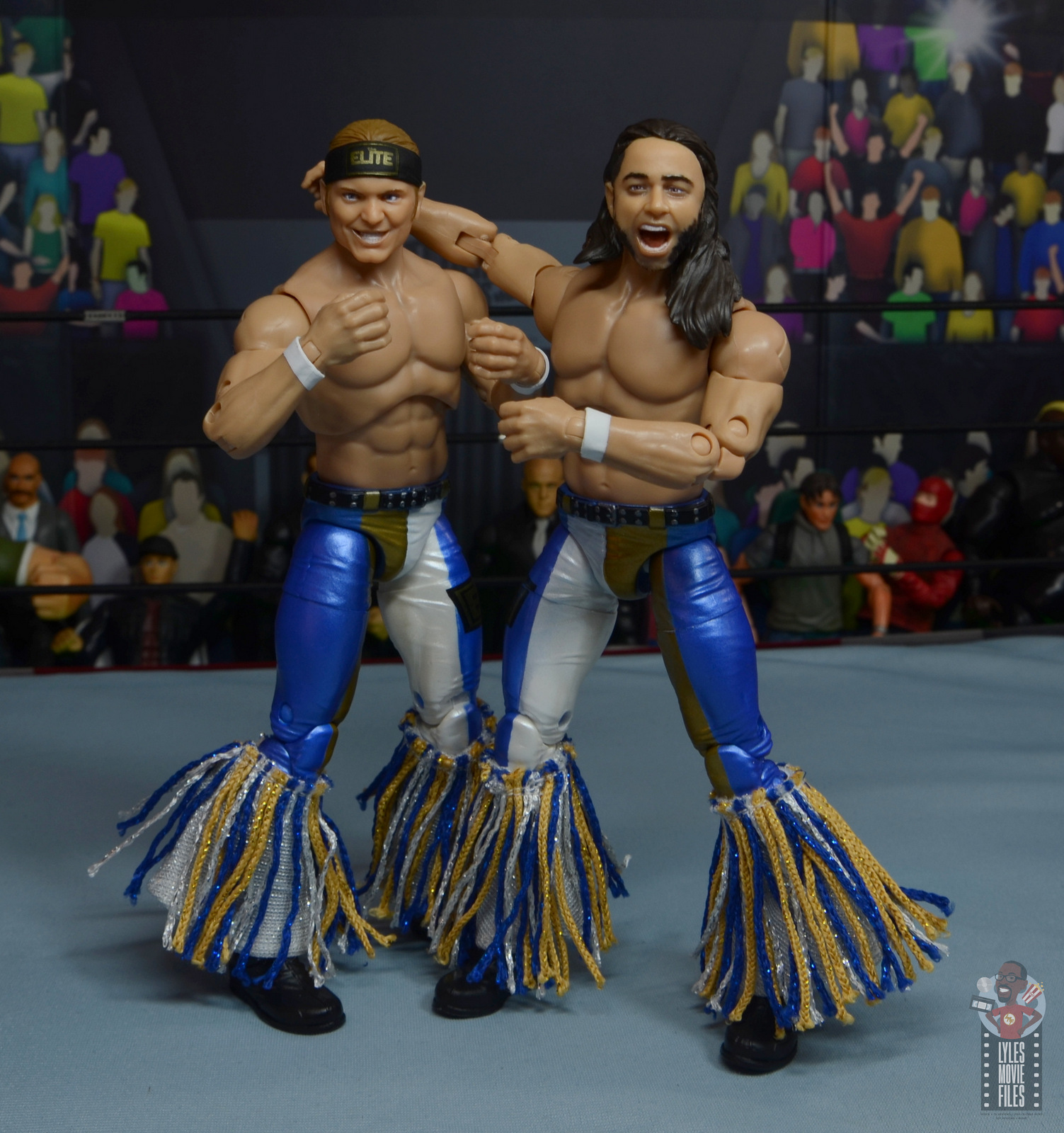 Their skin tone is normal now and I’ve been impressed that I haven’t seen any WCT figures that have awful paint applications so far. I like the blue, gold and white attire and WCT nailed it with a touch of a metallic paint. 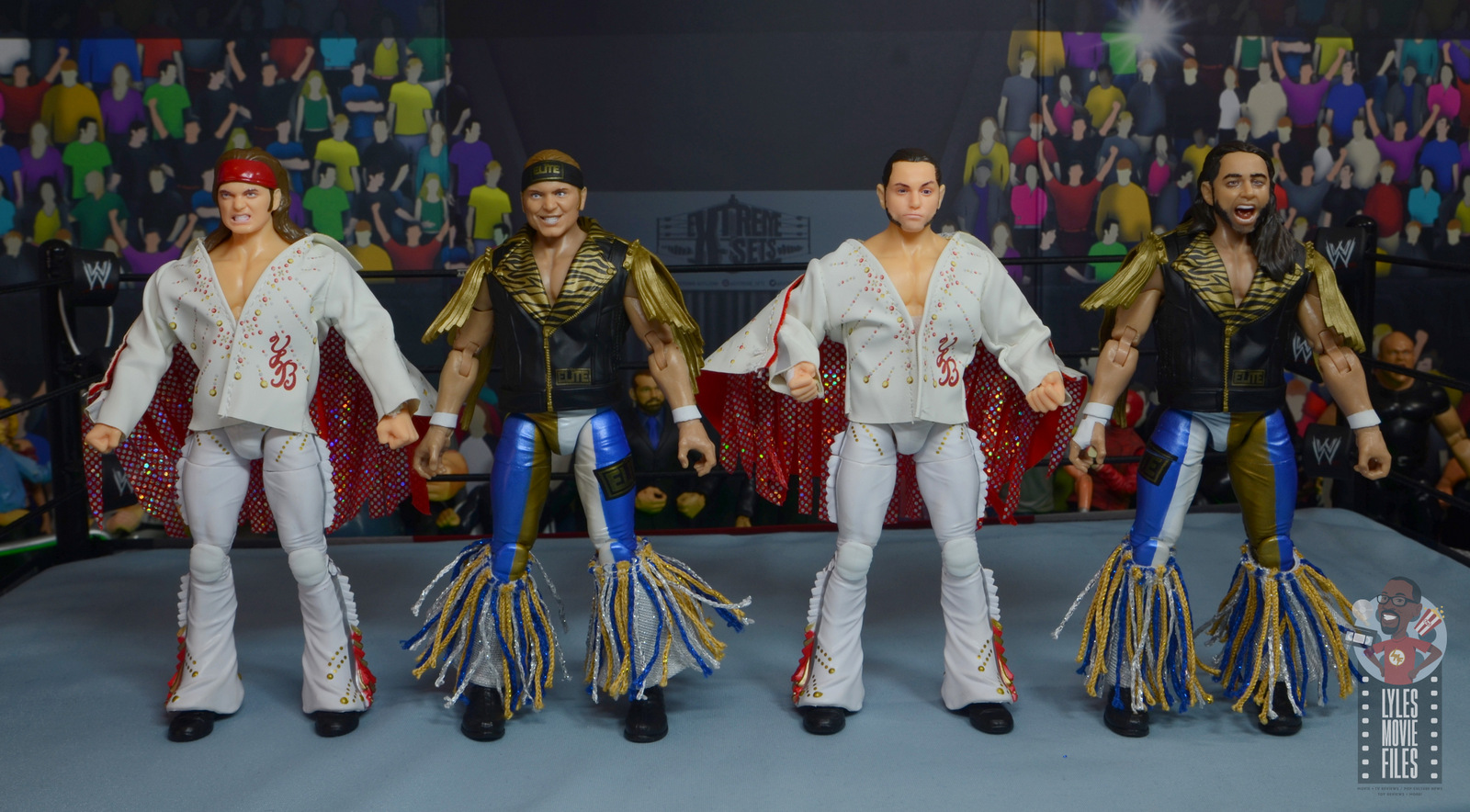 Articulation:  The Unrivaled figures boast the best articulation of any wrestling figure line. 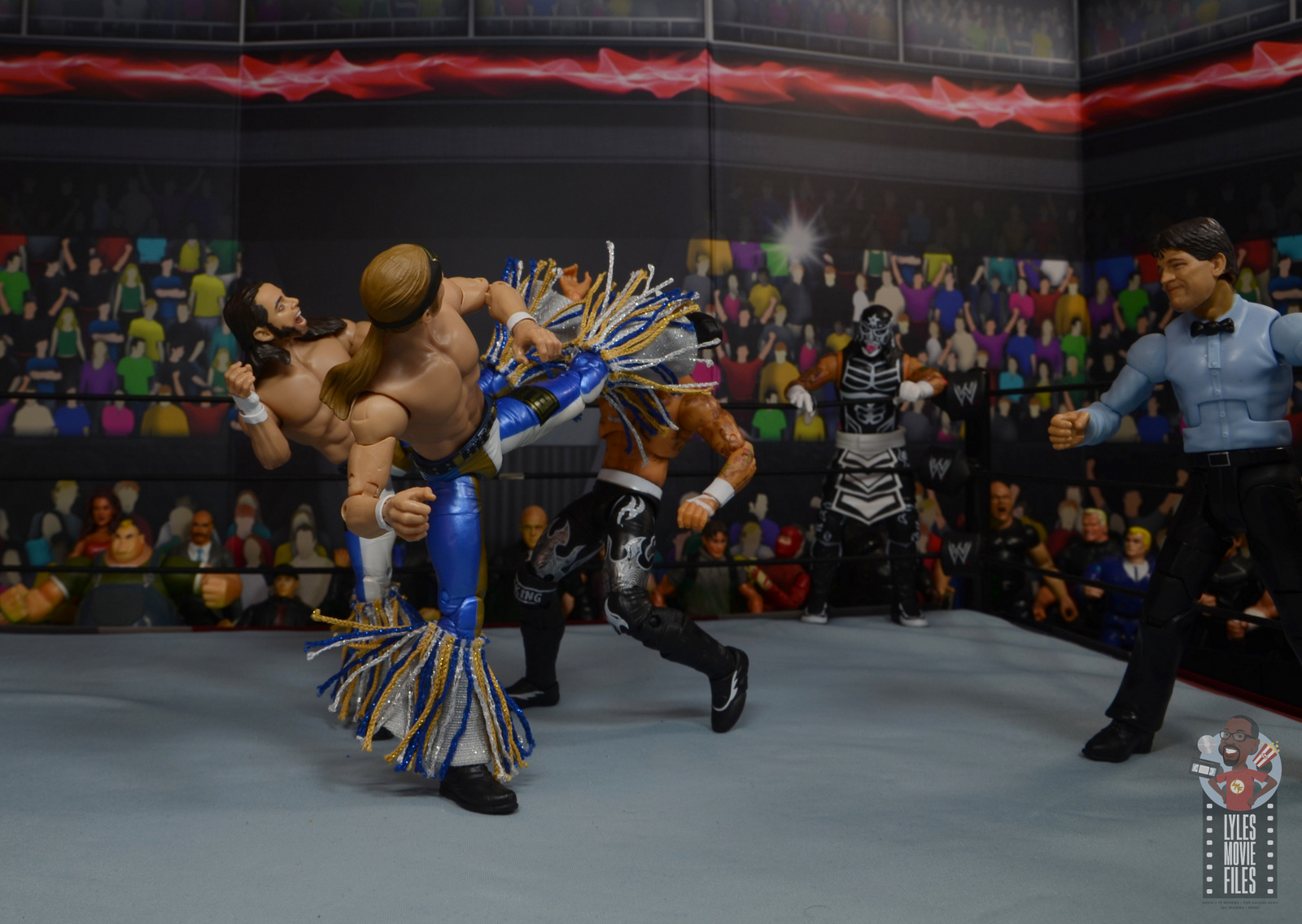 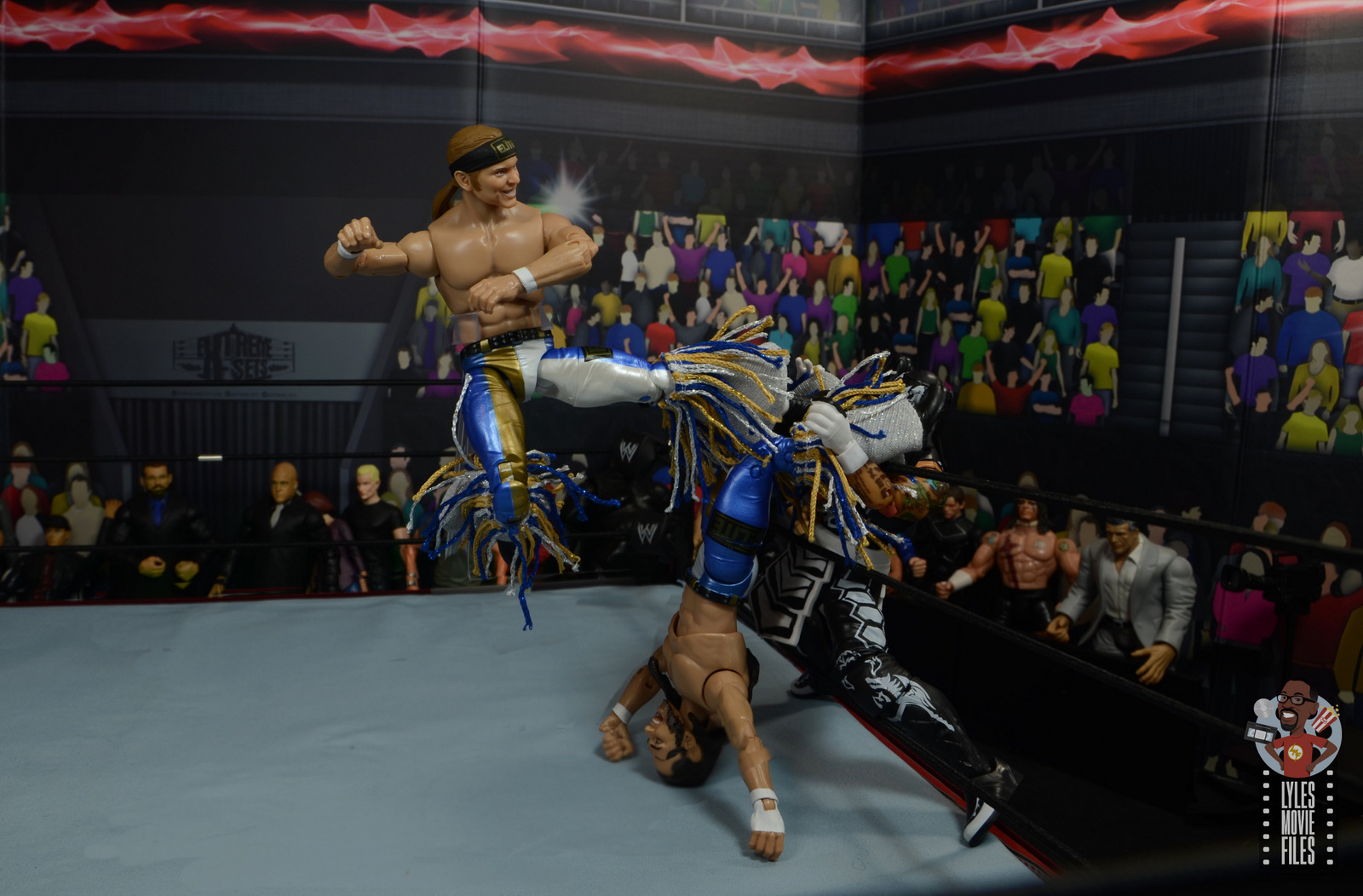 It’s surprisingly not close and I continue to be amazed at how easy it is to pull off moves with this articulation scheme. 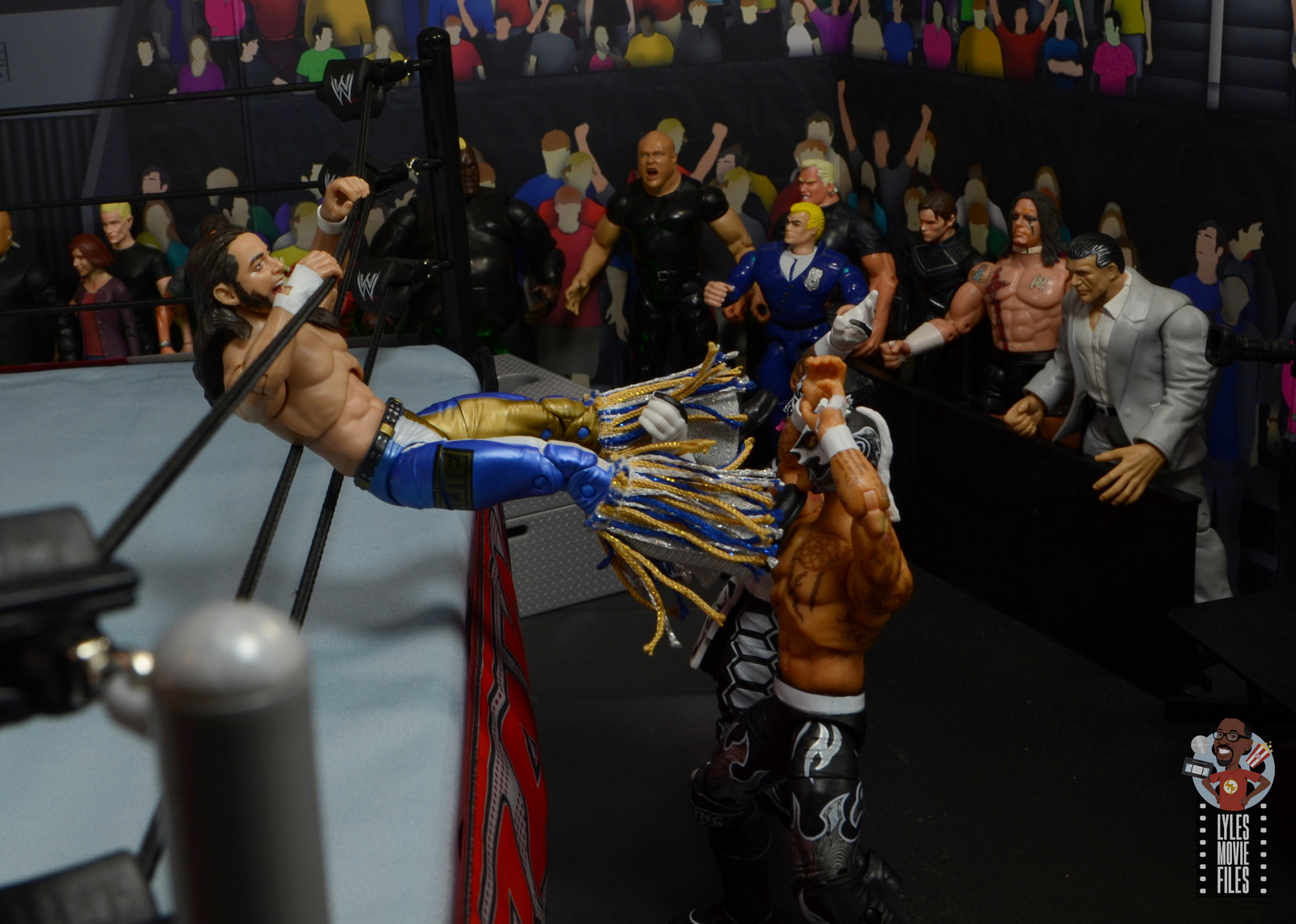 There’s still a few limitations in pulling off some of the Young Bucks’ crazier moves, but IndyTakers and Meltzer Drivers along with a million super kicks aren’t any problem.

The Young Bucks have: 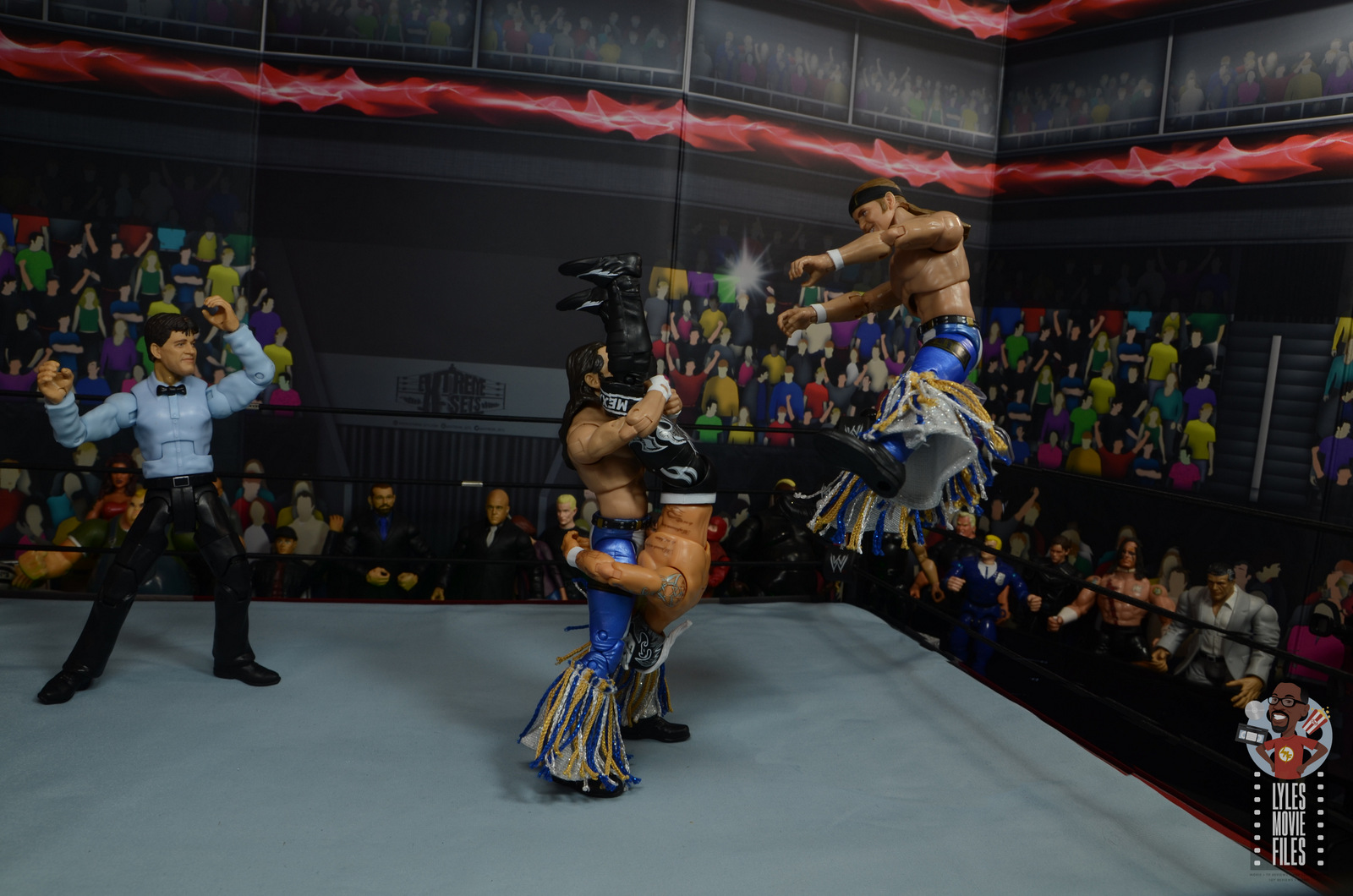 Accessories:  Wave 3 marks the last Unrivaled series where the accessory offerings are a little underwhelming. 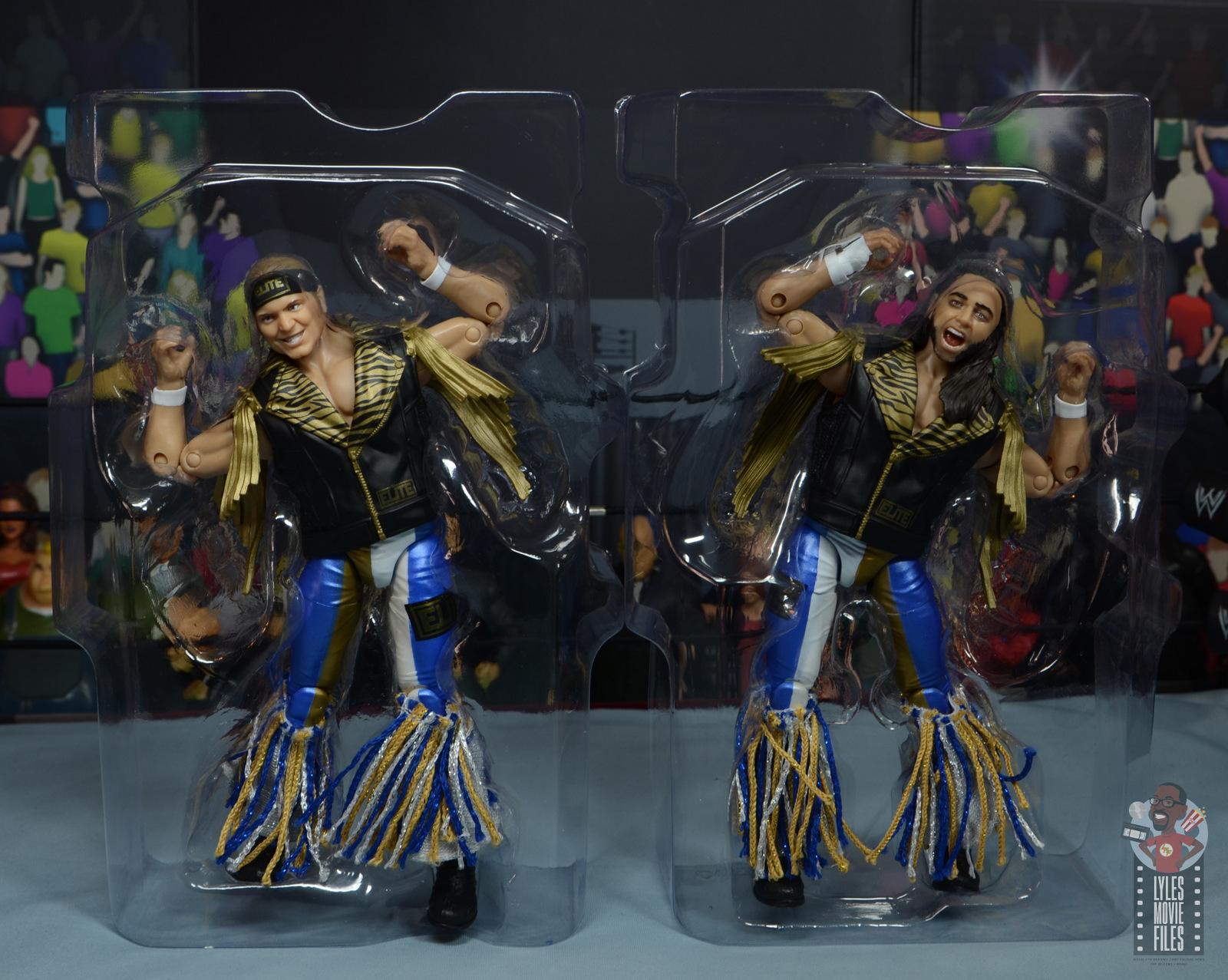 The Bucks have plastic vests with the fringes hanging in a way that looks fairly natural. The detail work on the vests is solid and the paintwork is very impressive. 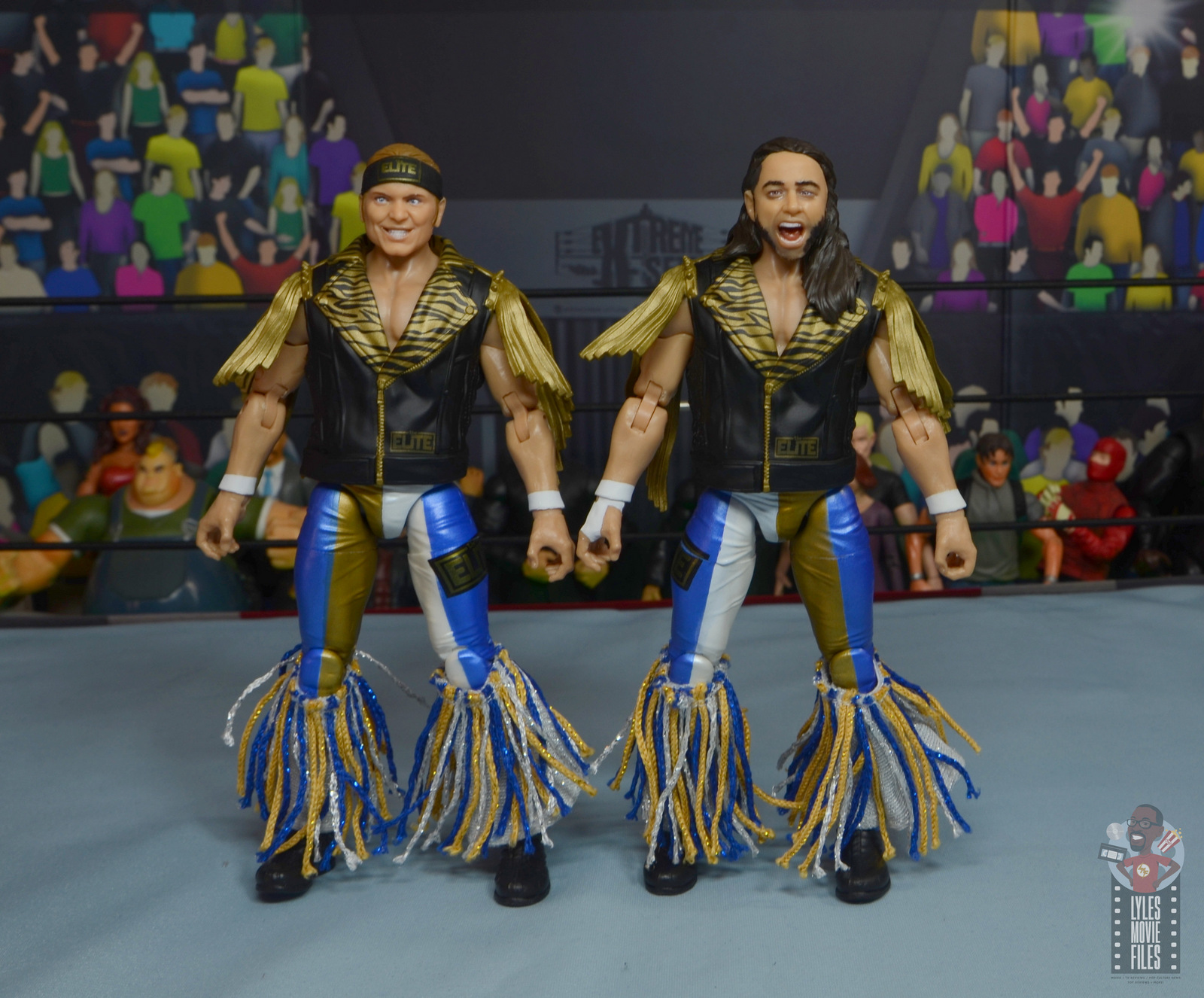 For future YB figures, in addition to alternate head sculpts, it might be fun for AEW to include some bags of YB cash from their entrance.

Worth it?  I got both Young Bucks for $20 apiece. The value isn’t as amazing as some other figures, but Wicked Cool Toys has steadily made improvements to the line and starting with Wave 4 we’re getting a lot more to justify that price point.

WCT went the extra effort and immediately added fresh head sculpts. Once we get a set where both Nick and Matt’s sculpts are strong and the fringe portion is mastered, we’ll get a definitive set. 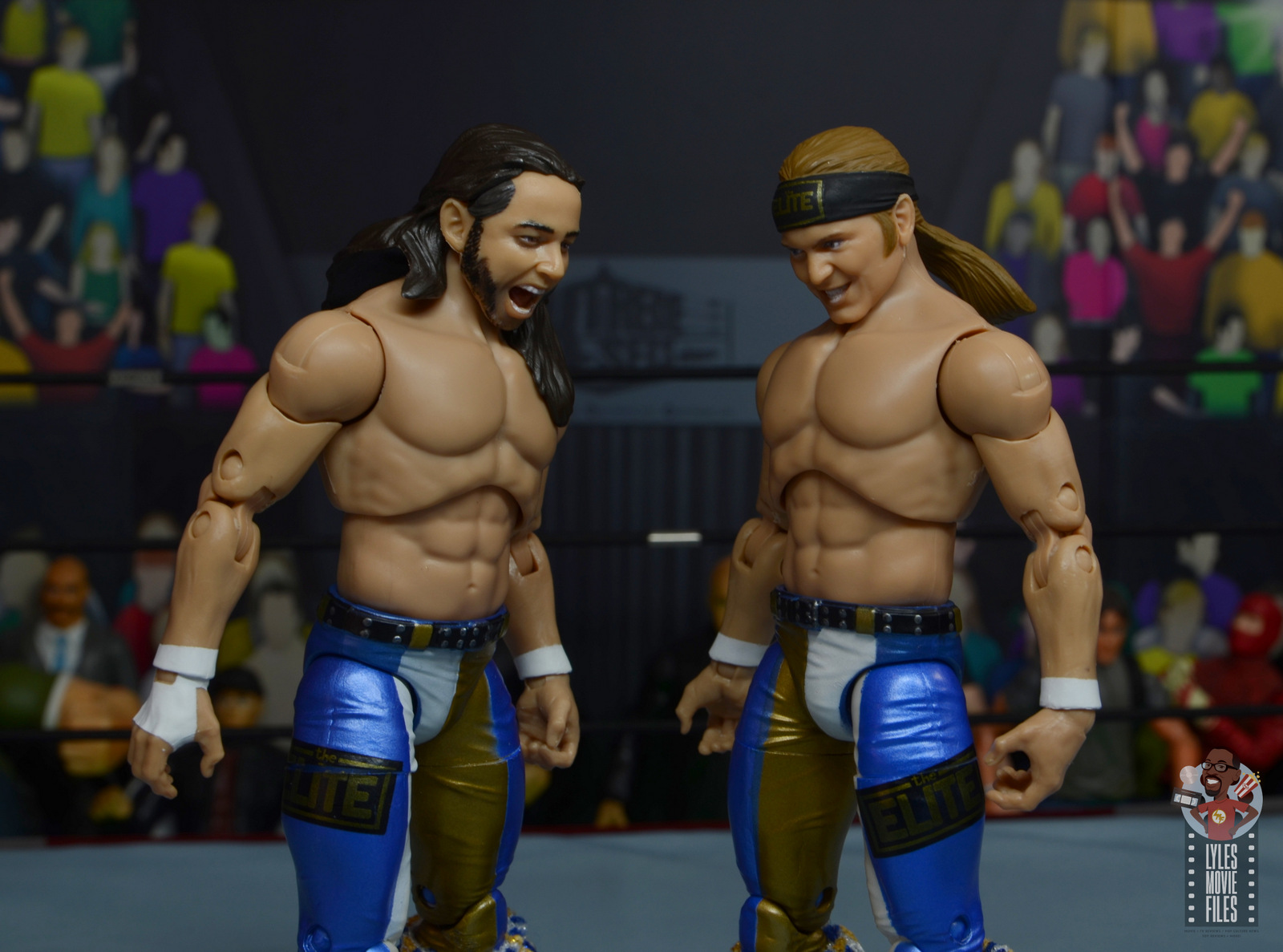 Where to get it?  Starting with Wave 3, AEW Unrivaled is showing up at Target, which has done a great job of restocking the wave already. Wave 4 is already shipping so you should probably try and get them when you find them.  Worse case? You can get Matt and Nick now on Amazon.