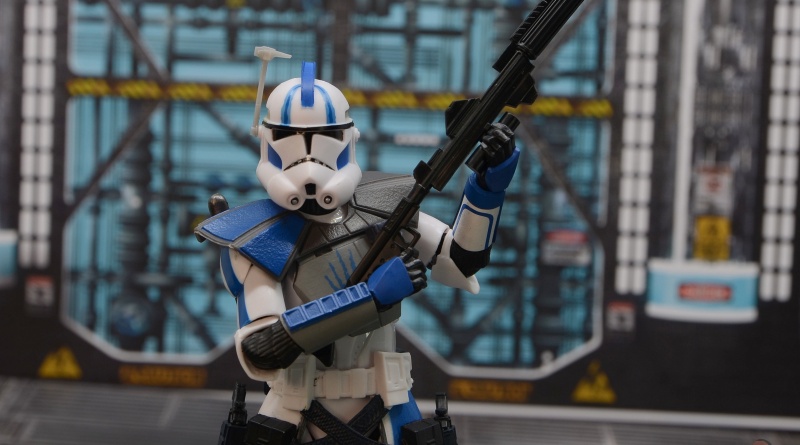 My Clone Wars clone army is lacking to put it kindly. I’m very excited that Hasbro is re-releasing the 501st troopers and Captain Rex. They’ll make for terrific additions next to today’s figure, the ARC Trooper Echo figure.

Echo was one of the more distinct clone troopers under Anakin Skywalker’s command until he had disastrous encounter with Clankers that had his squad believing him dead. That’s another story. Echo was released as part of the Target exclusive Lucasfilm 50th anniversary line. There’s a lot riding on Echo as my first named clone trooper so let’s see if he’s as impressive as I hope.

Packaging: I really appreciate the unique nature of this packaging with setup of the original Clone trooper helmet. It shows off the figure and accessories nicely. And for whatever reason I think it looks even cooler with a clone trooper figure.

Unlike the Anakin and Obi-Wan Kenobi figures, the portrait art doesn’t immediately giveaway this is from the cartoon or a realistic style mock up.

The back is lame as there’s no bio or any unique element from one figure in this wave from the other. 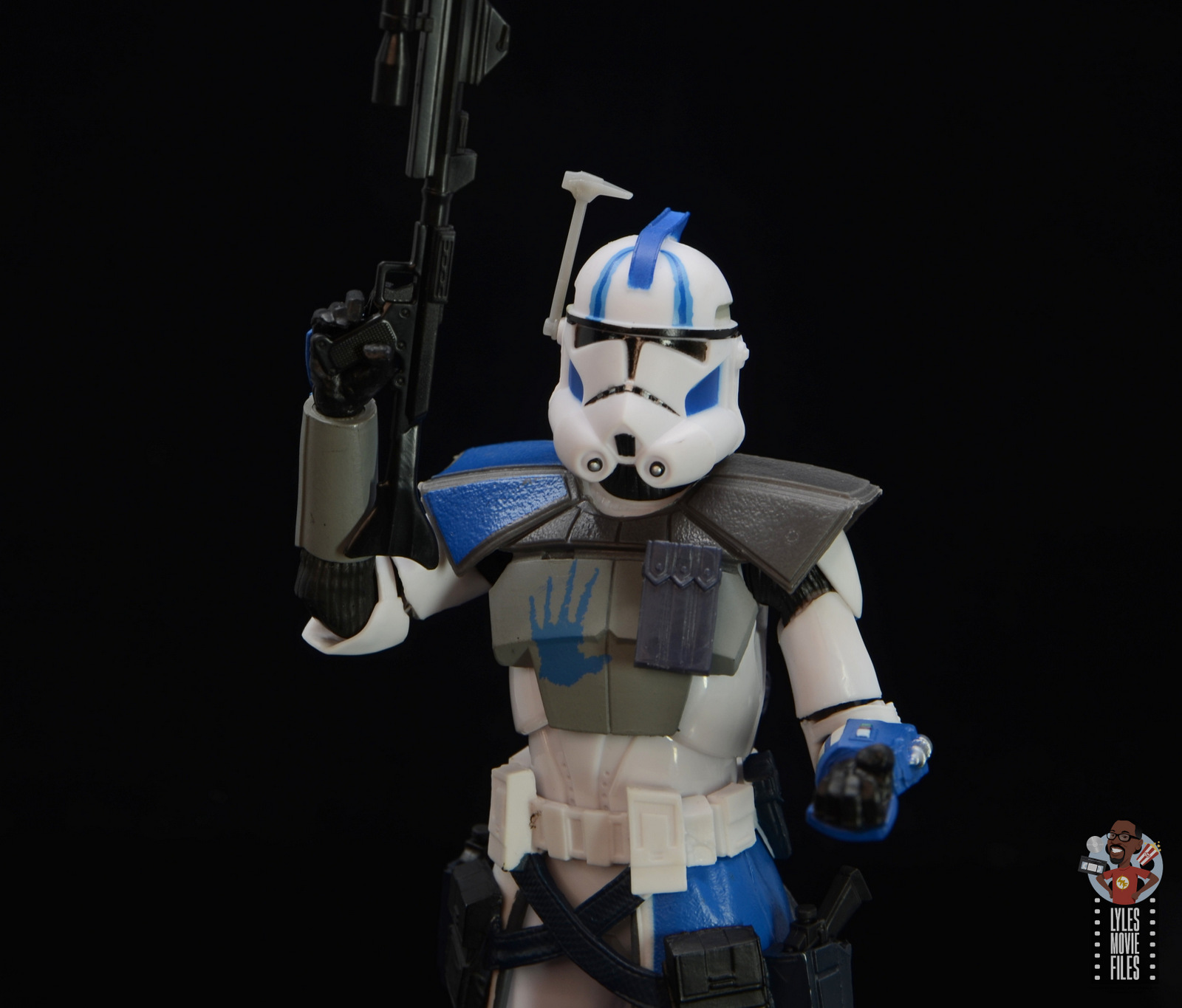 Likeness:  Echo features a great likeness to actor Temuera Morrison. I love how the show was able to make the clones look unique despite having Morrison’s Jango Fett likeness. 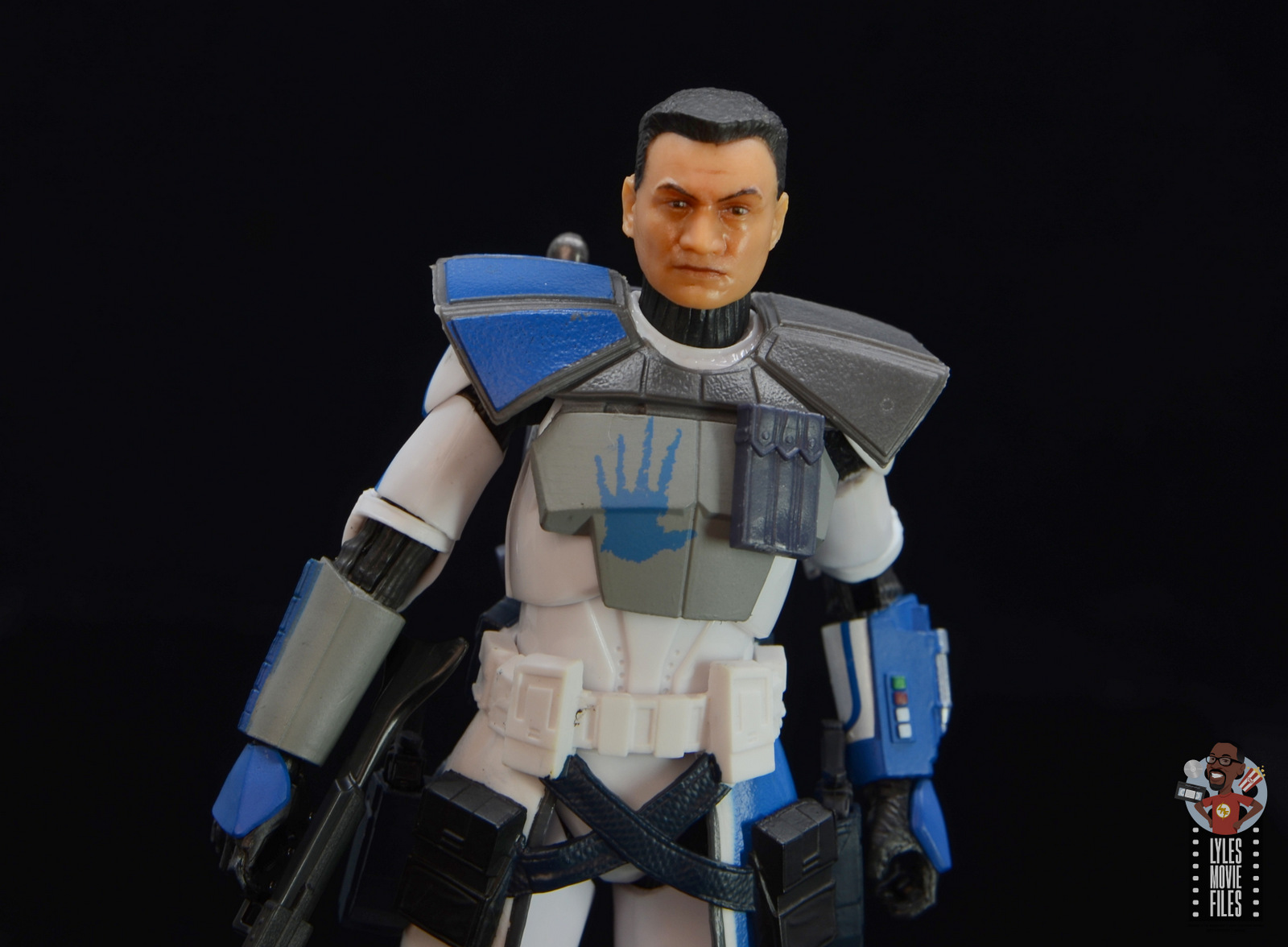 As an ARC Trooper, Echo is more geared up than the standard clone trooper. 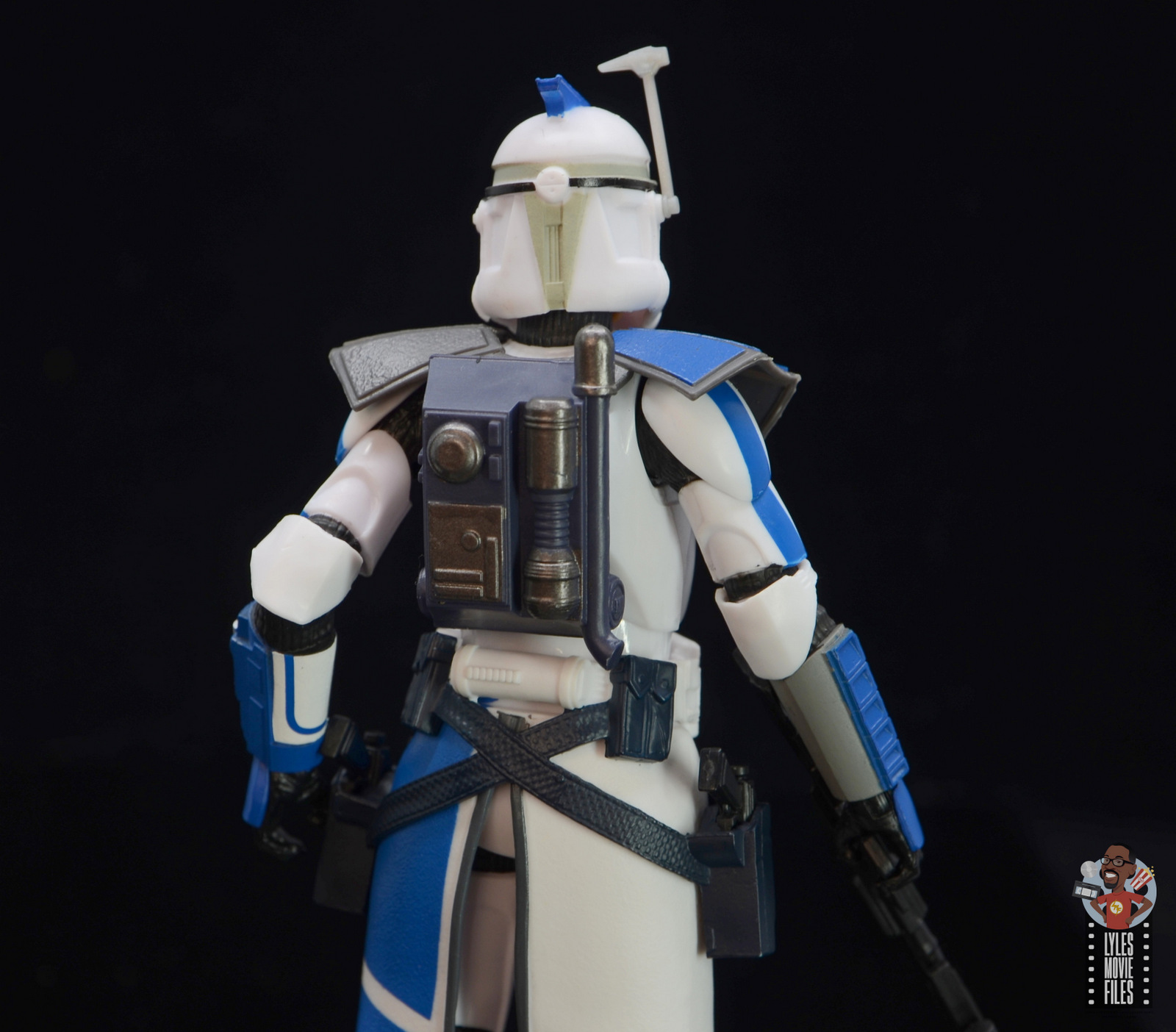 He’s got shoulder pads, additional chest armor with pouches, a skirt with additional pouches and unique gauntlet and shin armor.

The ARC Trooper armor looks really cool and it’s one of my favorite of the clone/Stormtrooper variations. Echo’s well armored and geared up for action. He seems to share a decent amount of base elements with the Clone Commander Bly with the arms to the forearm and hips to the knees. 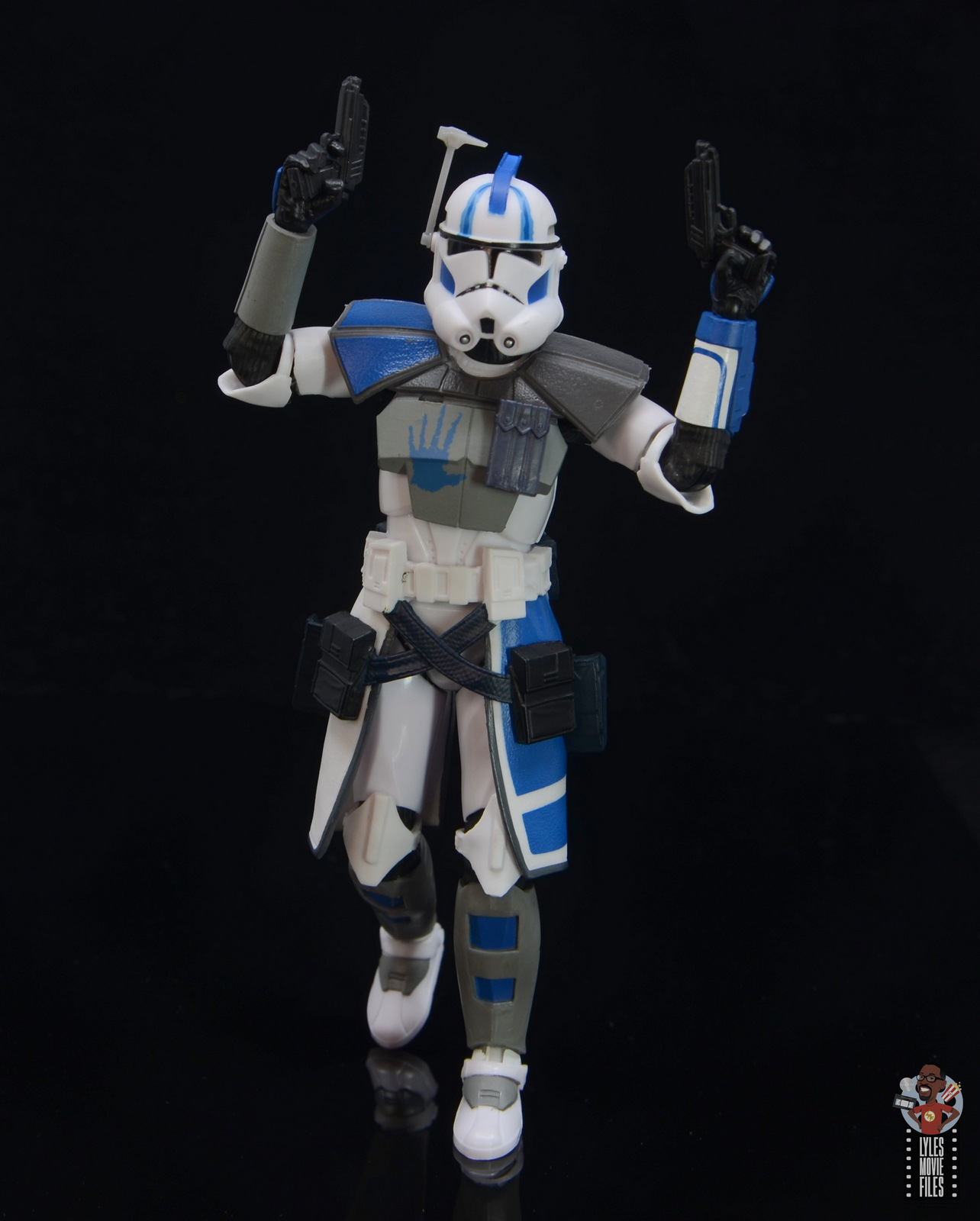 Echo has a different collar piece/shoulder pad section, the additional chest armor, gauntlets and shin armor. It’s those additional aspects that take Echo’s armor to the next level and make for a cooler ARC Troper setup.

I also appreciate the texturing with the leather-like sections of the shoulder pads, belt and skirt sections. It gives the figures a more realistic look.

Paint:  The paintwork is largely solid — the hip belt has some random black paint on one side and isn’t fully covered on the other side.

The line work of the skirt and the smaller sections of the gauntlet and shin sections is smooth. Echo’s handprint came out very nicely and the work on the head sculpt is superb. 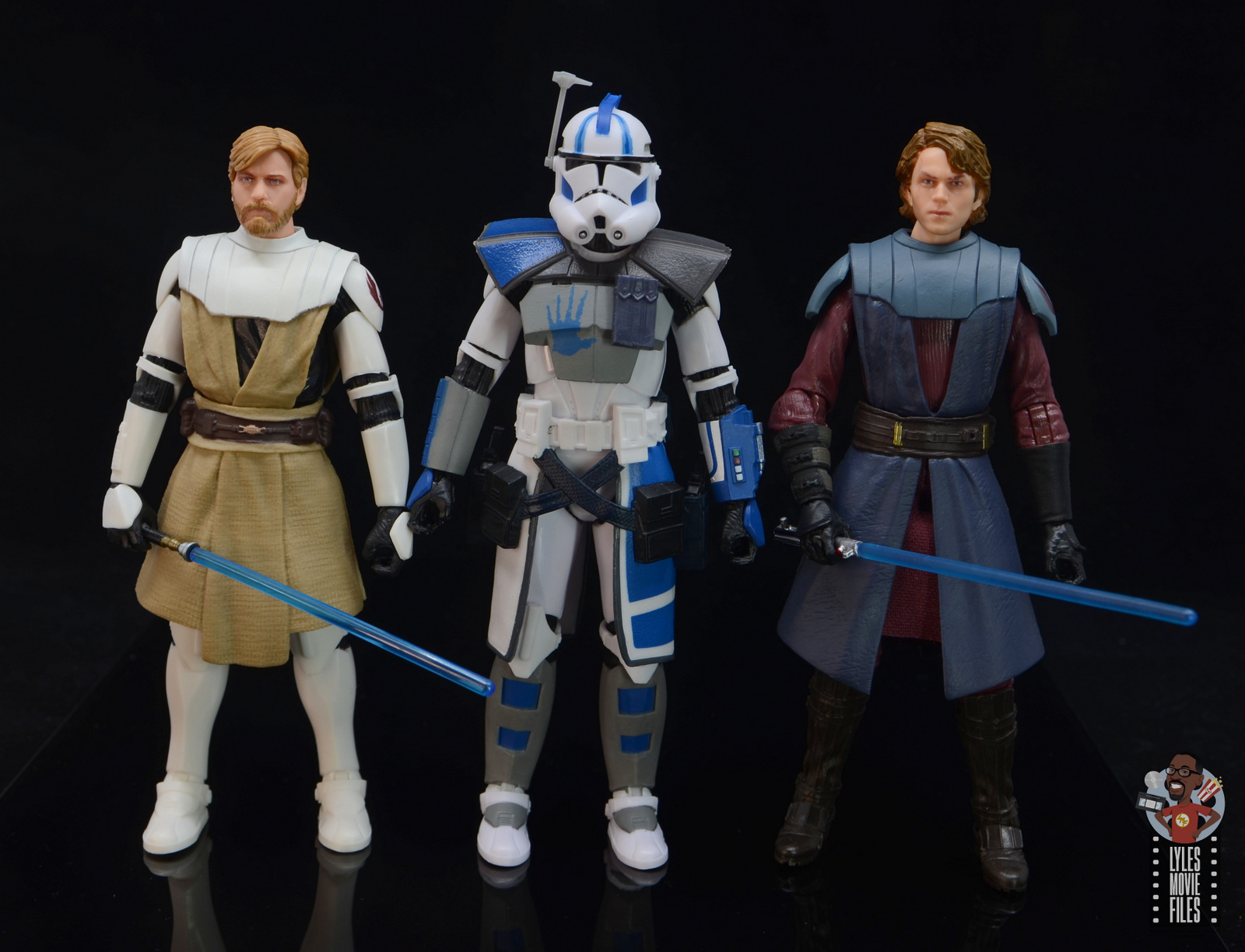 Scale:  Echo has a lot of gear, but he should still be shorter than Anakin. The helmet gives him a little extra height, but without it he is shorter than the general.

Articulation: Echo has solid articulation and can strike some good poses thanks to the semi-floating torso. His shoulders have terrific up and down range thanks to the flexible material used for the shoulder pads. 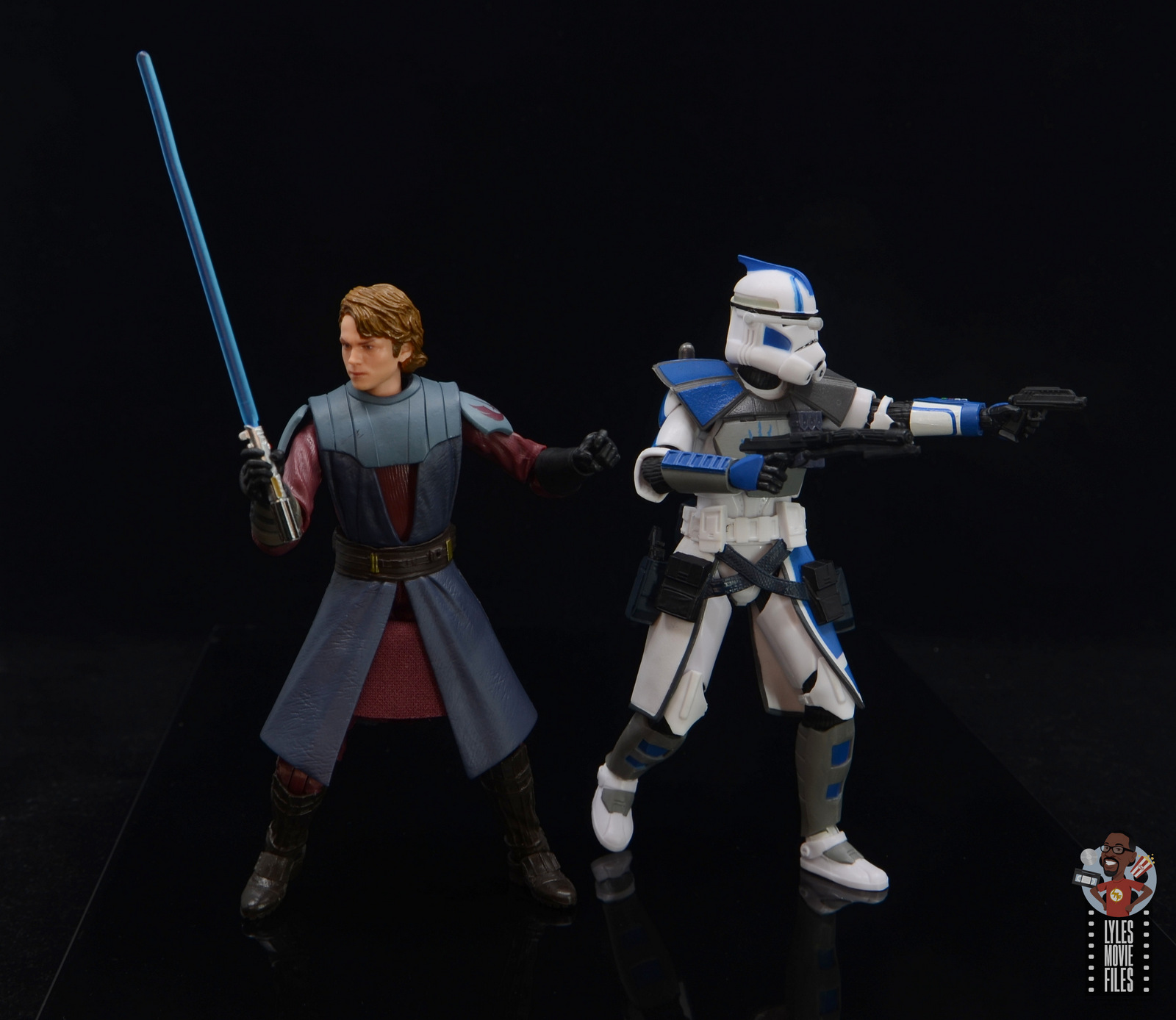 As you’d probably expect the skirt does restrict some of the movement with his legs so you’re not going to get a lot of dynamic kicking or crouching poses. 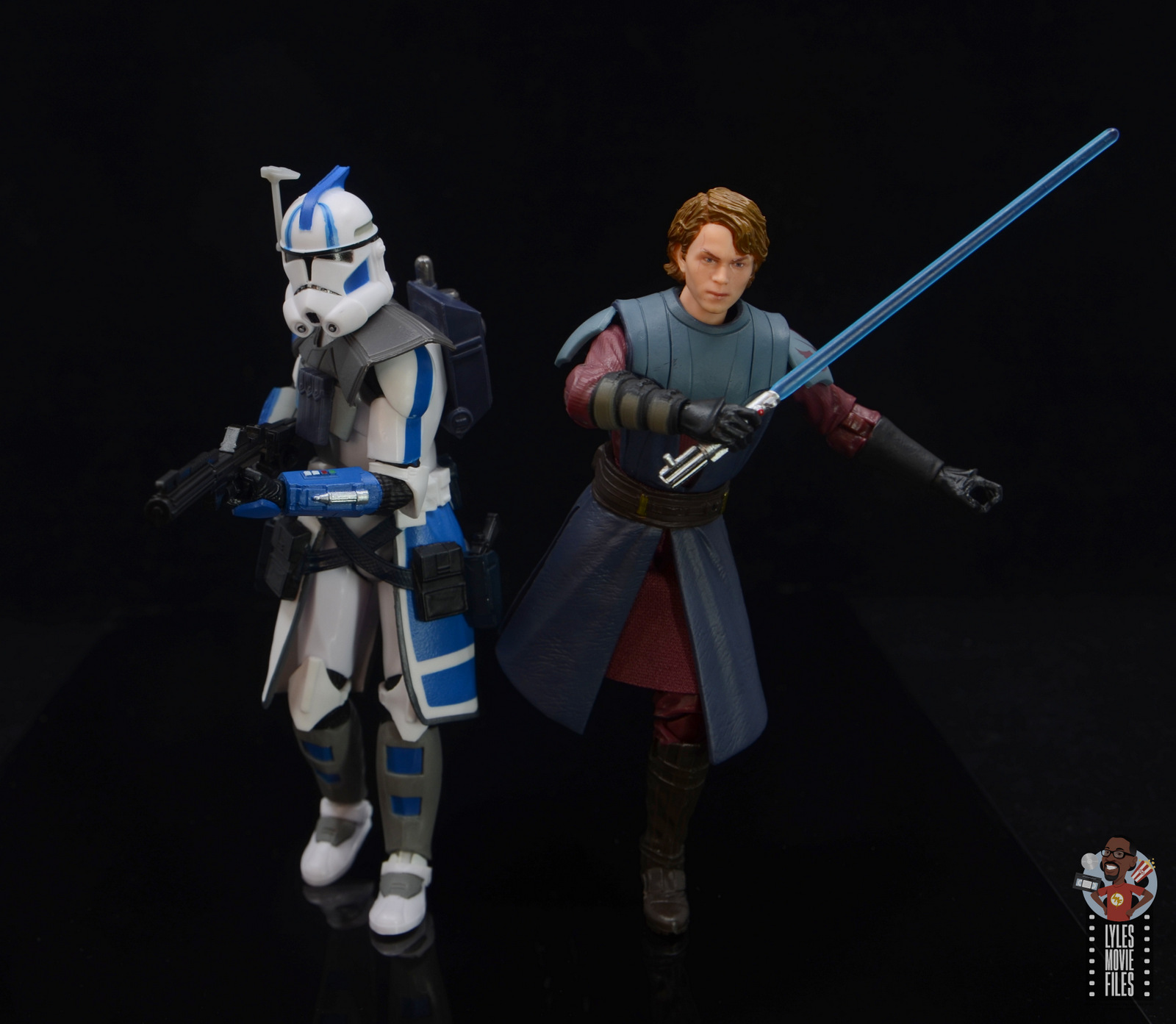 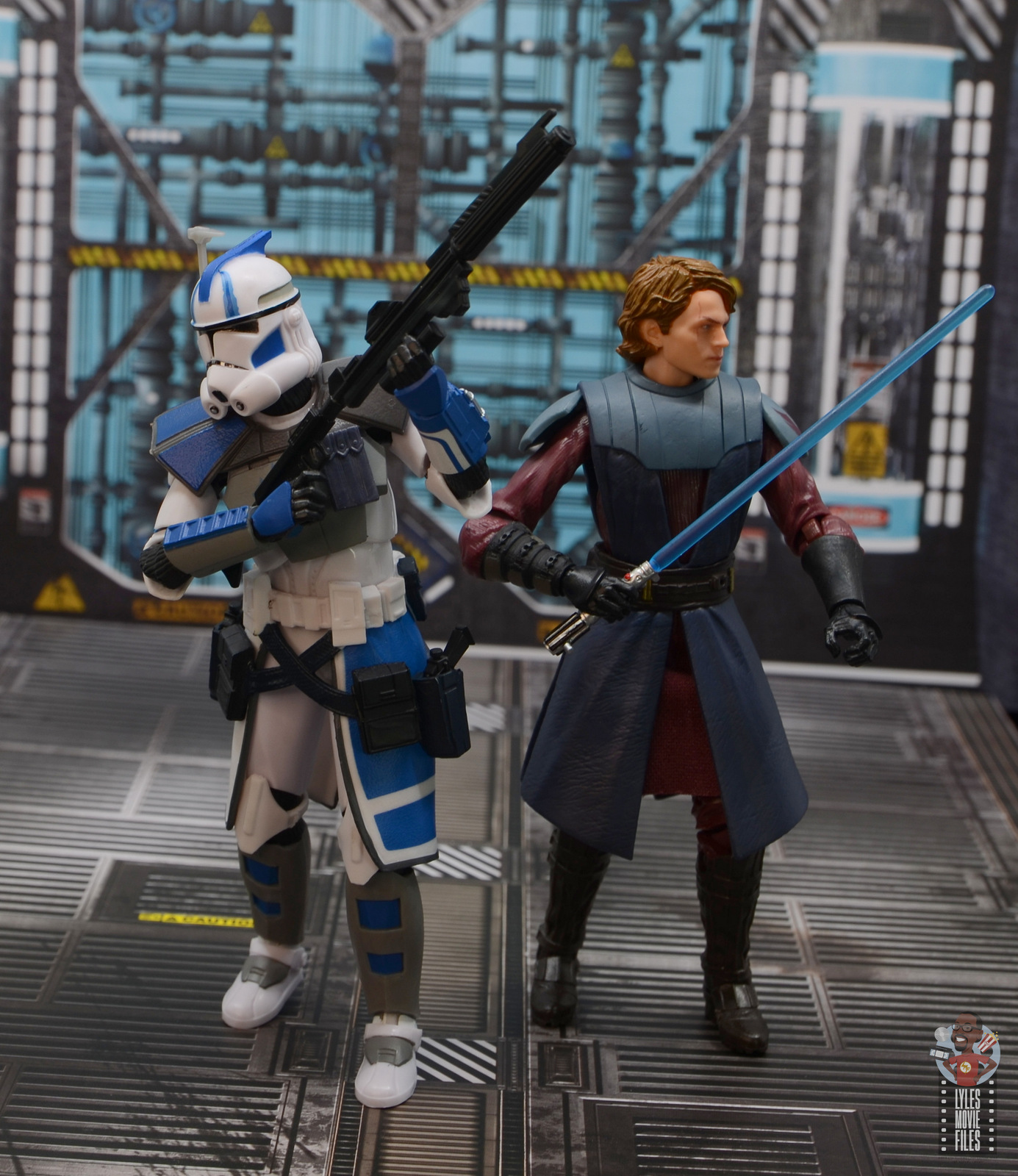 Accessories:  Unlike the other figures in this wave, Echo is loaded up with accessories. 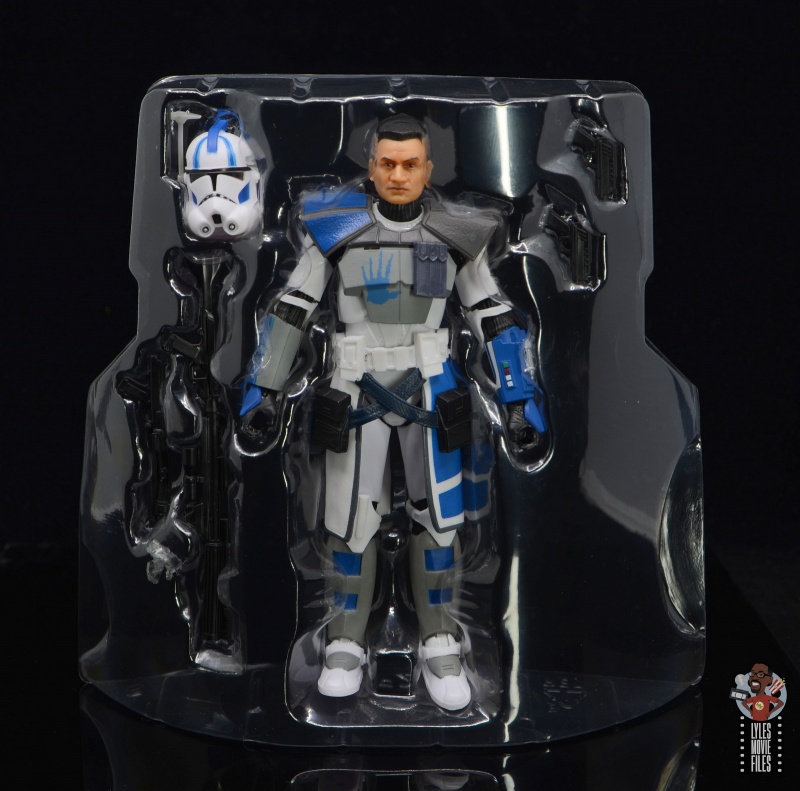 He’s got two smaller blasters that fit into his holsters on either side. 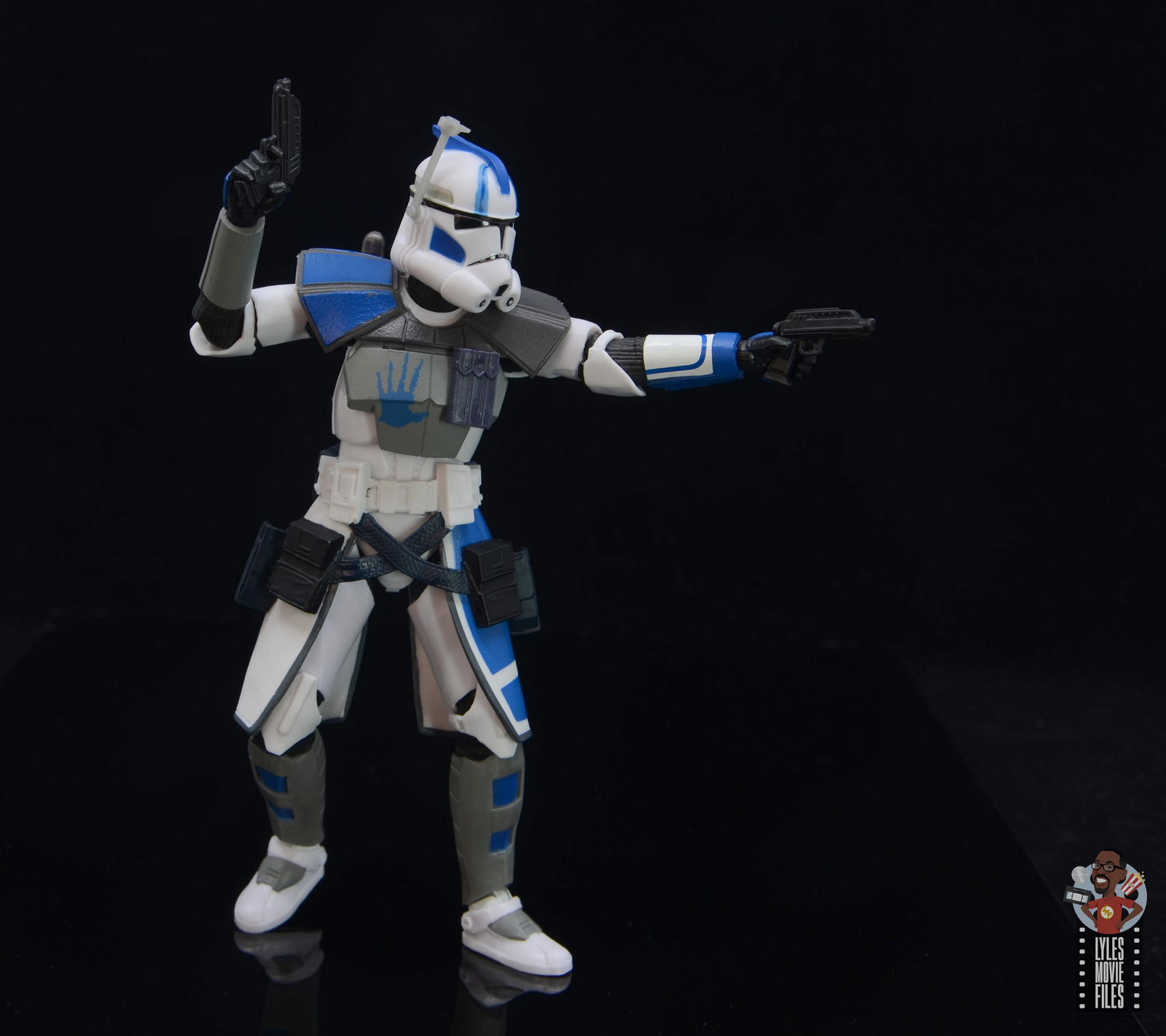 He also has the longer standard DC-15A blaster. He’s also got a medium blaster so he is covered in terms of taking on Battle Droids. 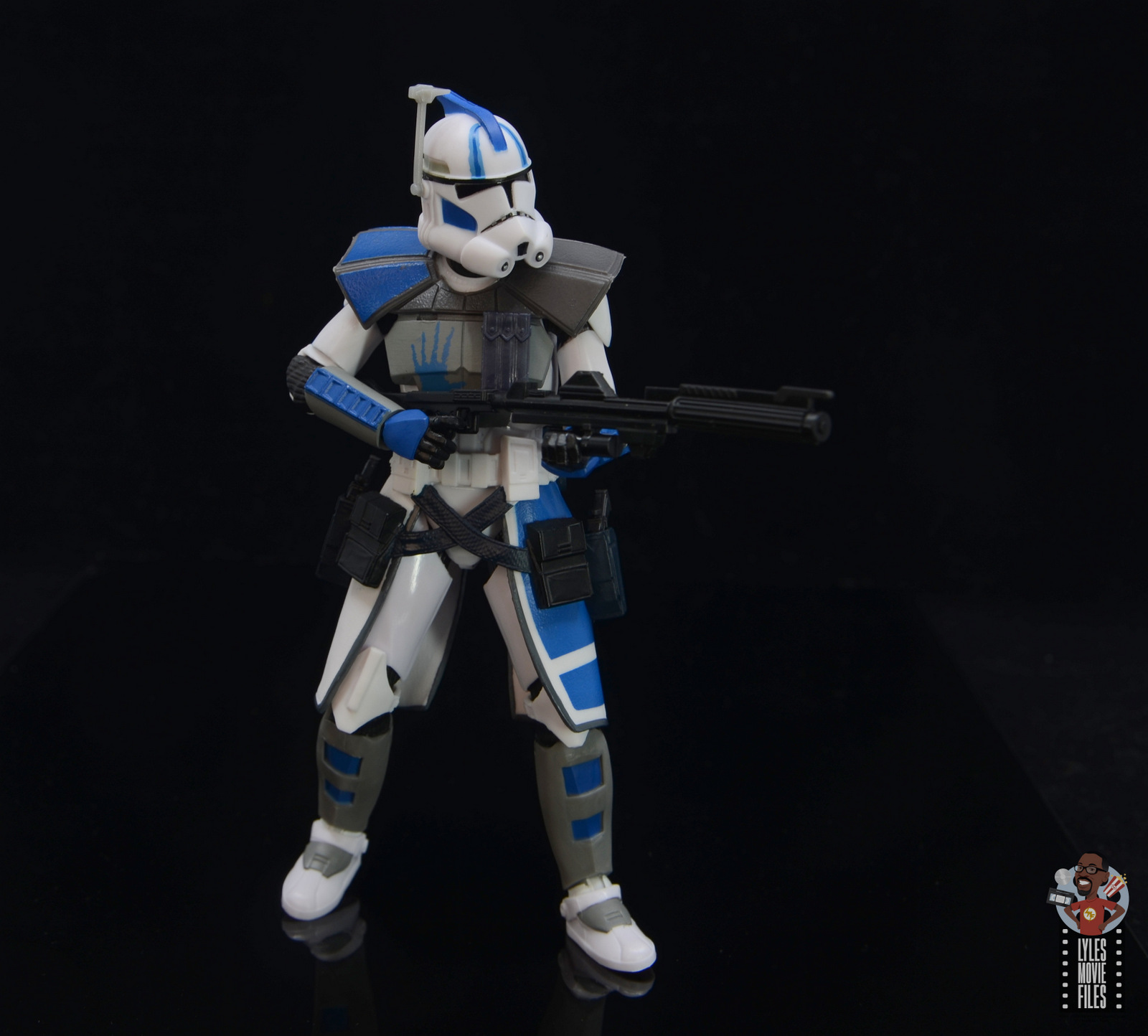 Finally, he’s got his helmet. The ARC Trooper design has a little bit more flavor and unique colors than the standard helmet. The paint is mostly fine on mine although some of the more precise line work doesn’t quite match up properly. 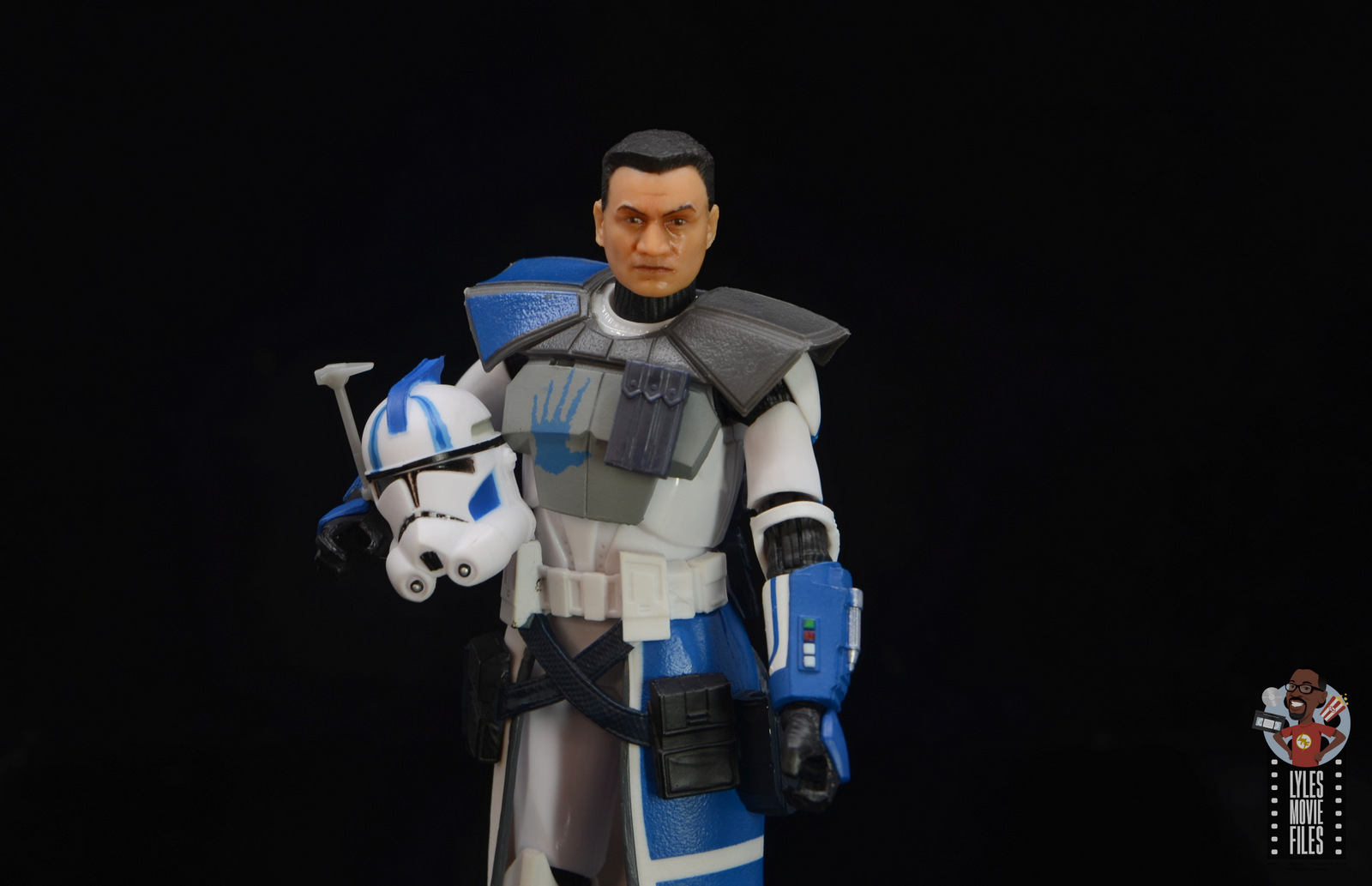 Worth it?  This is a standard $20 figure that’s now got a $26 price tag. Not a good bargain Jim. Hasbro’s Marvel Legends team is throwing in more accessories along with the Build-A-Figure parts. Hasbro really needs to find a way to sweeten the deal for Black Series collectors.

Better range out of leg articulation would have been ideal, but otherwise this is a really great addition to the Clone Wars lineup.

Where to get it?  This series is exclusive to Target, but Hasbro seems to be doing a better job of getting these figures onto pegs. I’ve seen enough restocks on shelves and Target’s website to convince me that if collectors wanted him, eventually they can track him down without resorting to paying jacked up online prices. 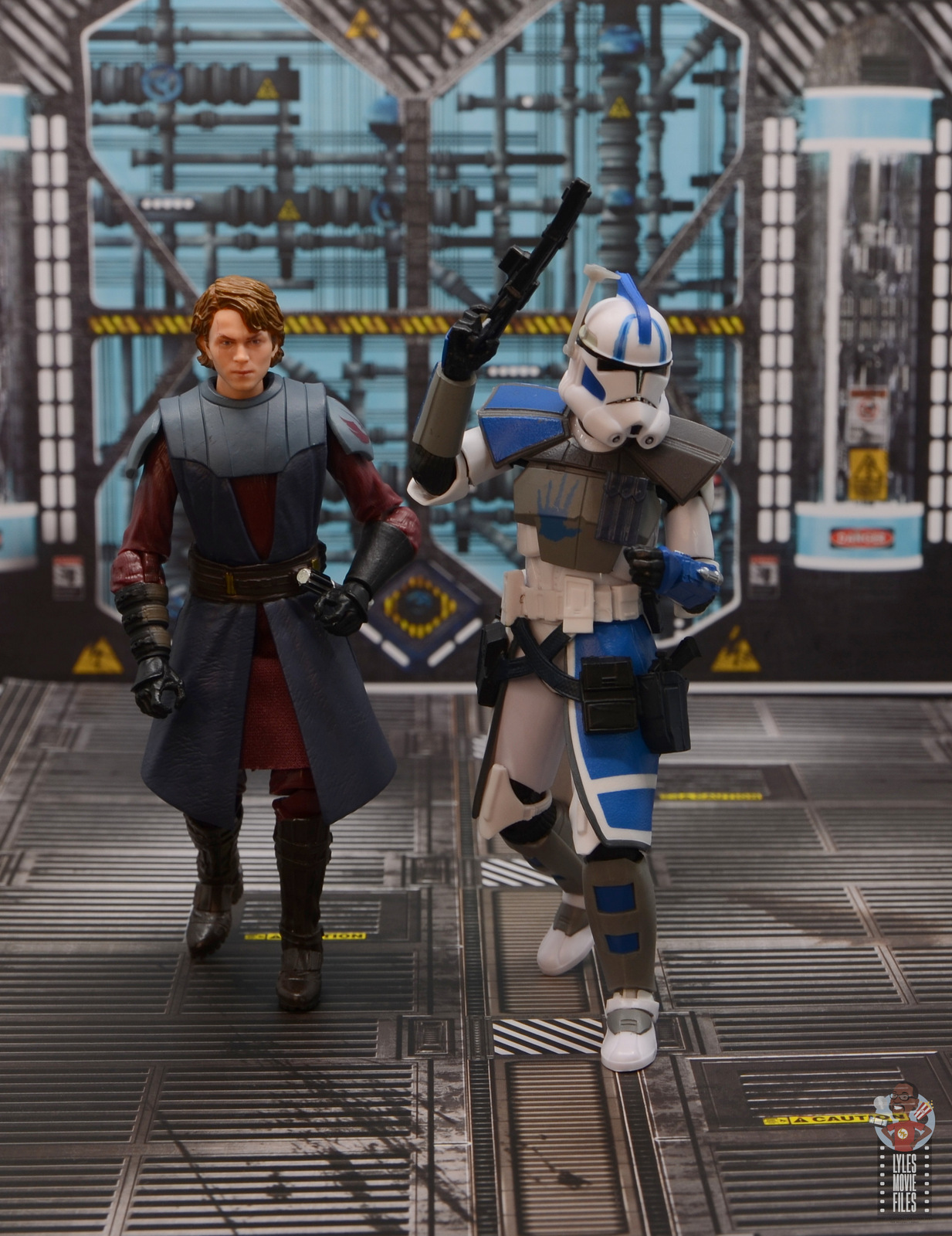 If you strike out, you can always go through Amazon.