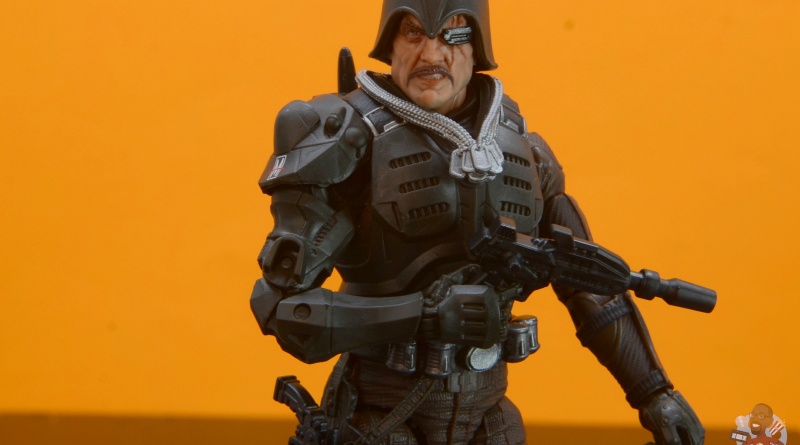 Major Bludd has always been one of my favorite Cobra associates. In the comics, Larry Hama wrote him as a ruthless mercenary hired gun while in the cartoon, he was one of the few reliable Cobra lieutenants that always completed his mission for Cobra Commander.

When he was announced Bludd was going to be part of the Assault on Cobra Island Target exclusive line there was much gnashing of teeth and Hasbro panel takeovers. And yeah, I wasn’t relishing the thought of finding one of my more anticipated Cobras through random Target trips. 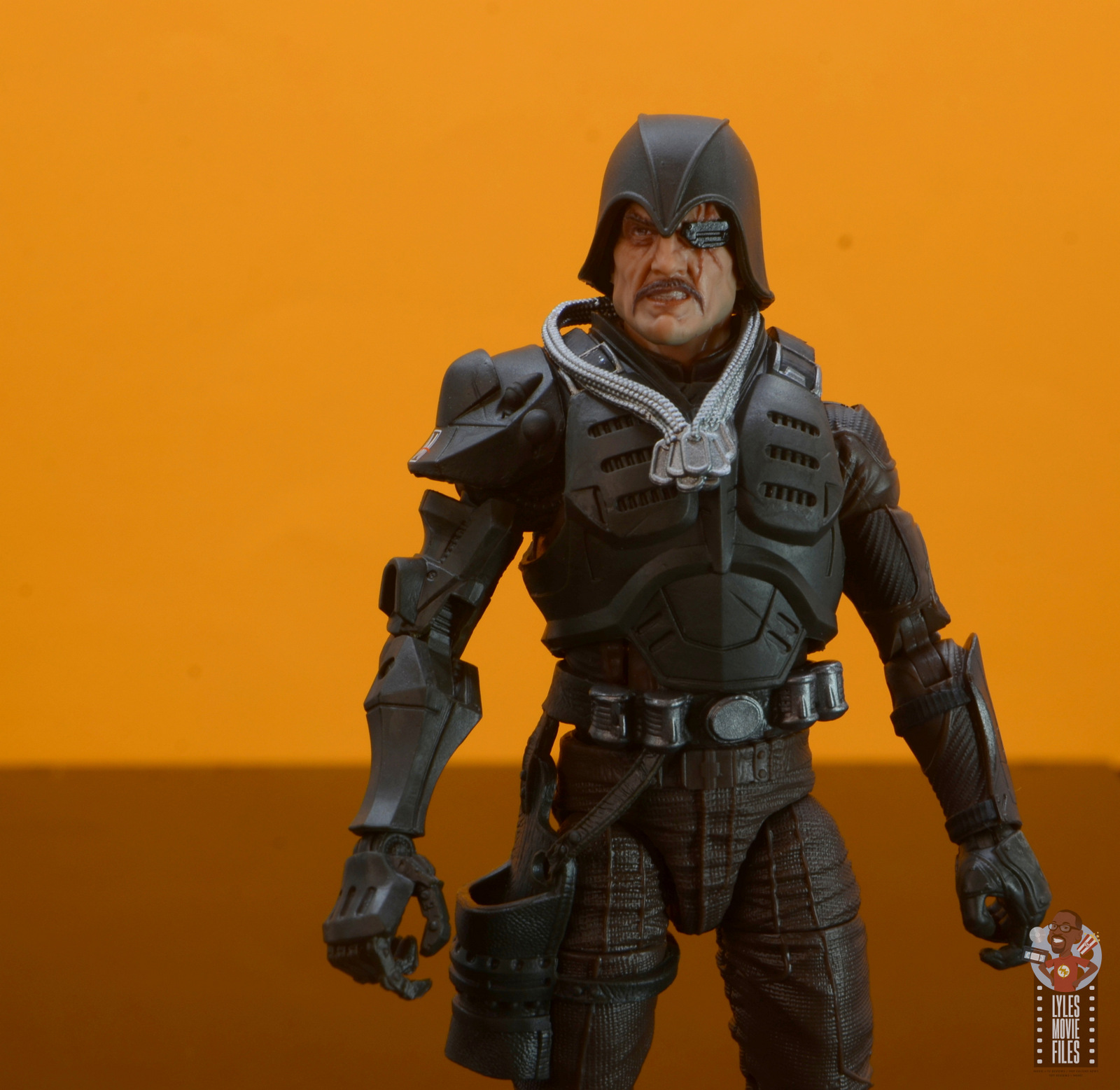 Fortunately, word spread pretty well in my area that Bludd was arriving in his own case, which meant collectors had six chances to get him providing some folks weren’t just trying to score a quick eBay payday. It took four stops, but I was able to track him down. Let’s see if he was worth the price I paid…in gas.

Package: This is the same Special Mission Cobra Island packaging, which is basically the same as the standard packing minus the cool character poster on the back. I’ve got enough Classified Series figures to start ranking the artwork now and Major Bludd guns his way right near the top.

I’m hoping at some point Hasbro releases a poster art book of these because they have all been really cool. Maybe as a book that includes the bios?

Hey! Speaking of, here’s the bio courtesy of the G.I. Joe website:

The rush Major Bludd gets from the chaos he causes in battle is second only to the excitement he gets from collecting his pay. One of the best prepared Cobra mercenaries, he is proficient with every form of infantry weapon and uses advanced tactics and psychological warfare to win at all cost. He has no belief system beyond landing the largest payday, an no deed is too despicable if it boosts his bankroll.

Major Bludd’s skill set backs that bio up with a 4 in mercenary, a 3 in tactics and sabotage and a 2 for launcher.

Likeness: Major Bludd is another banger with an incredible sculpt. Hasbro has found the ideal sweet spot now of modernizing the classic Real American Hero looks for these figures and the results are arguably the best looking six-inch figures on stands. 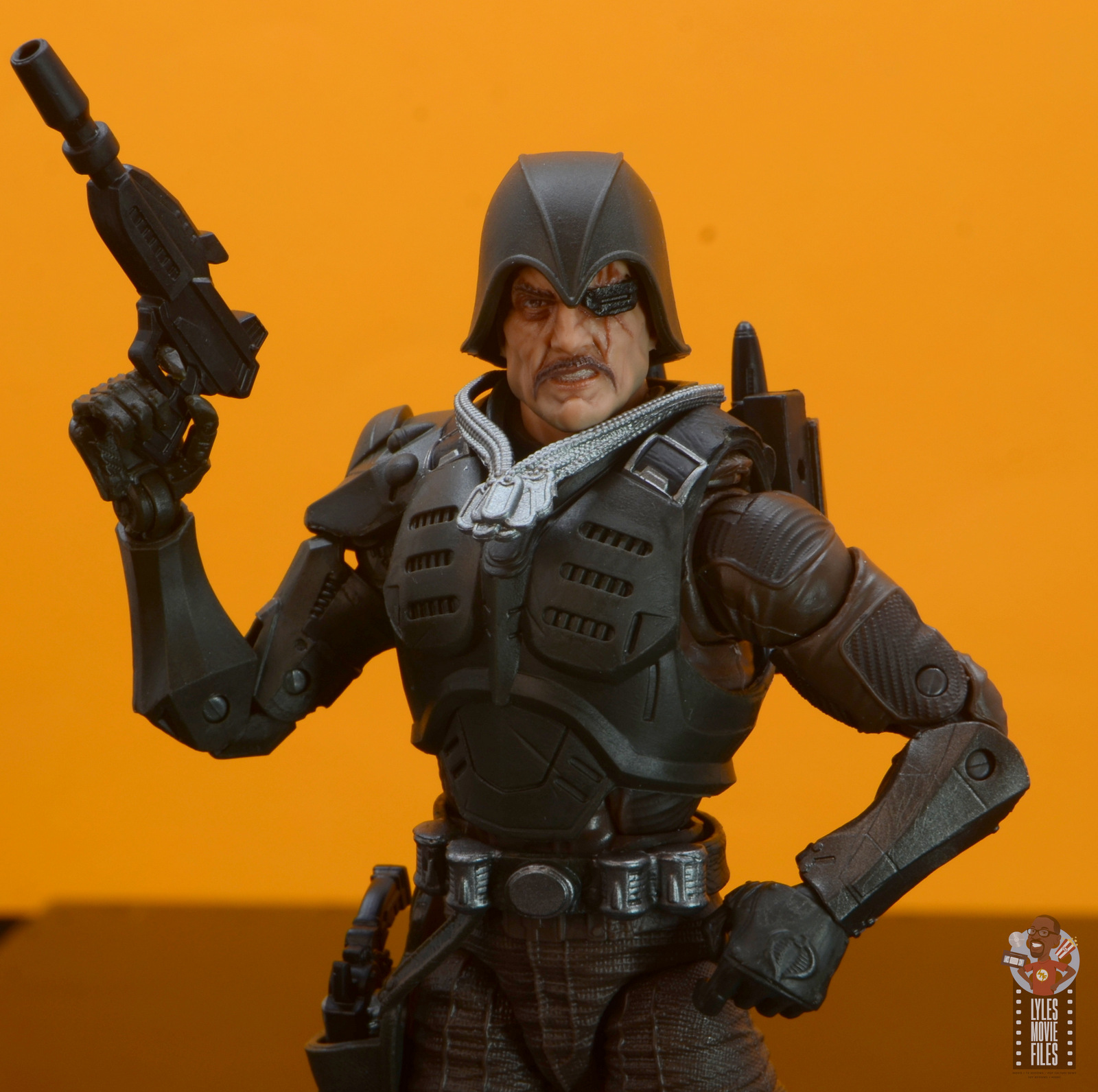 Granted this might be my nostalgia bias talking as I always thought the RAH designs were great for their time, but these updates are spotlighting the unique elements that made those outfits so cool and adding a modern flourish to make them even more appealing. 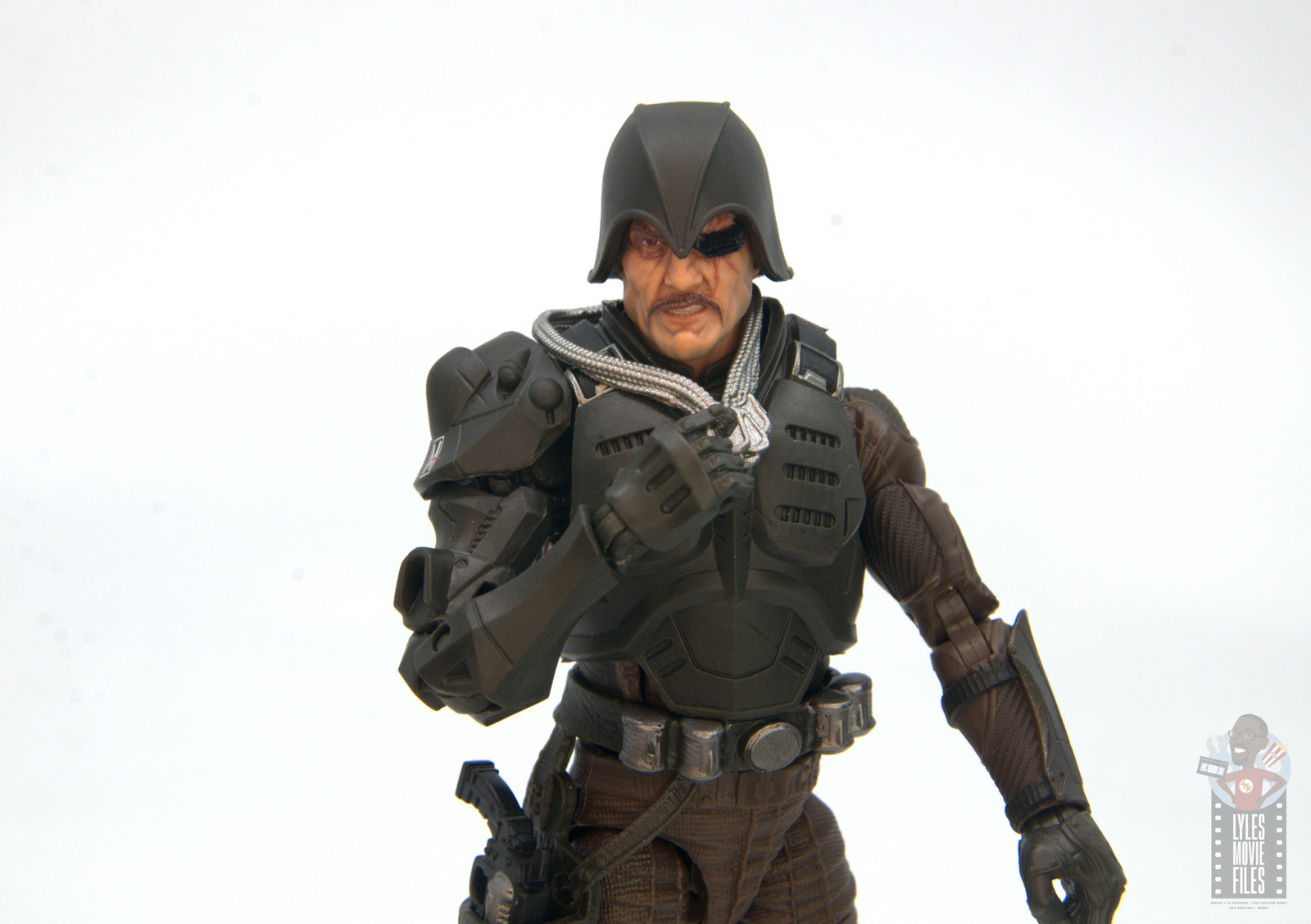 Bludd always had this skeevy look to him and the amazing head sculpt takes that even further to make him look like the last person you’d want chasing after you for a payday. I like the sneering expression as it suggests he’s dismissing the idea he can’t take down a target or he’s being offered less than he wants for a job. 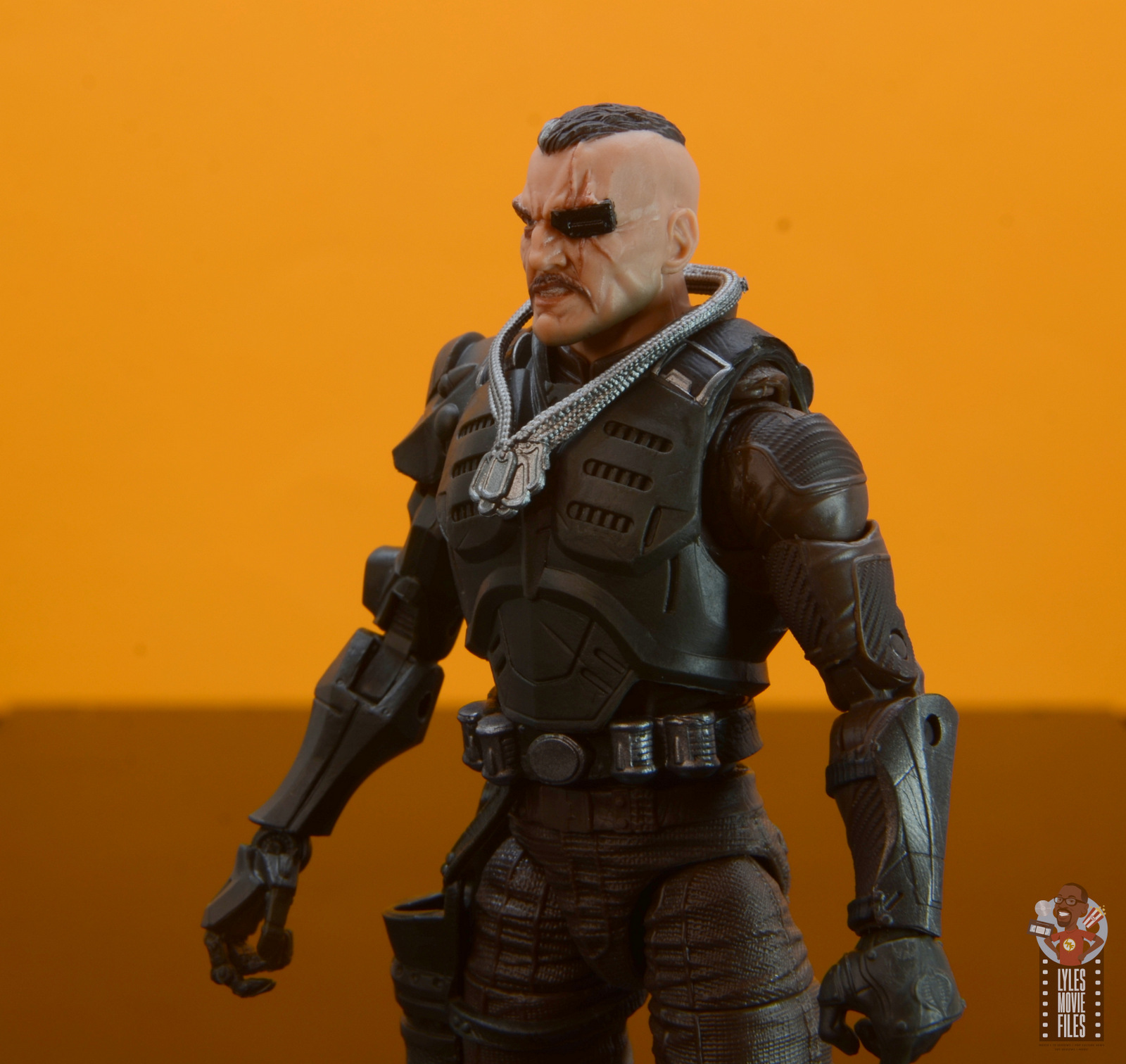 He definitely seems like the modern mohawk guy and the character details on his face with the wrinkles to convey his age and scars to show his battle experience is off the charts. And his eyepatch looks like it’s crammed with all kinds of top of the line tech. Is this the best head sculpt in the line so far? I’m struggling to think of a better one right now.

Major Bludd’s essential design elements are intact from the grooves in the chest armor, the heavily armored right arm, holster on the right leg and high boots with armor plating. 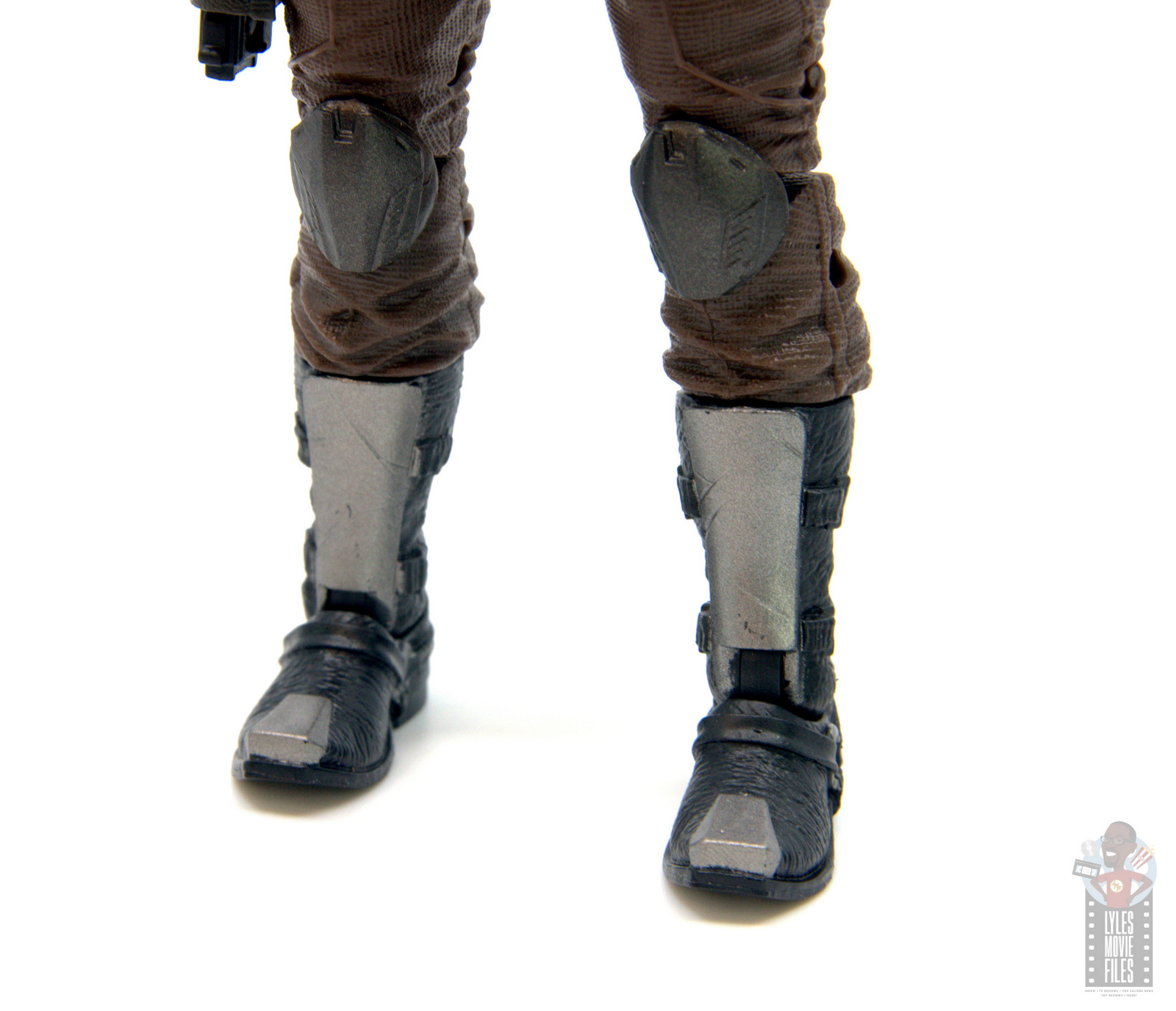 I love the work on the “metal arm” as it keeps that illusion that Bludd might be using a prosthetic of some kind that helps give him an edge in combat. And of course the dog tags presumably of some of his most storied targets. 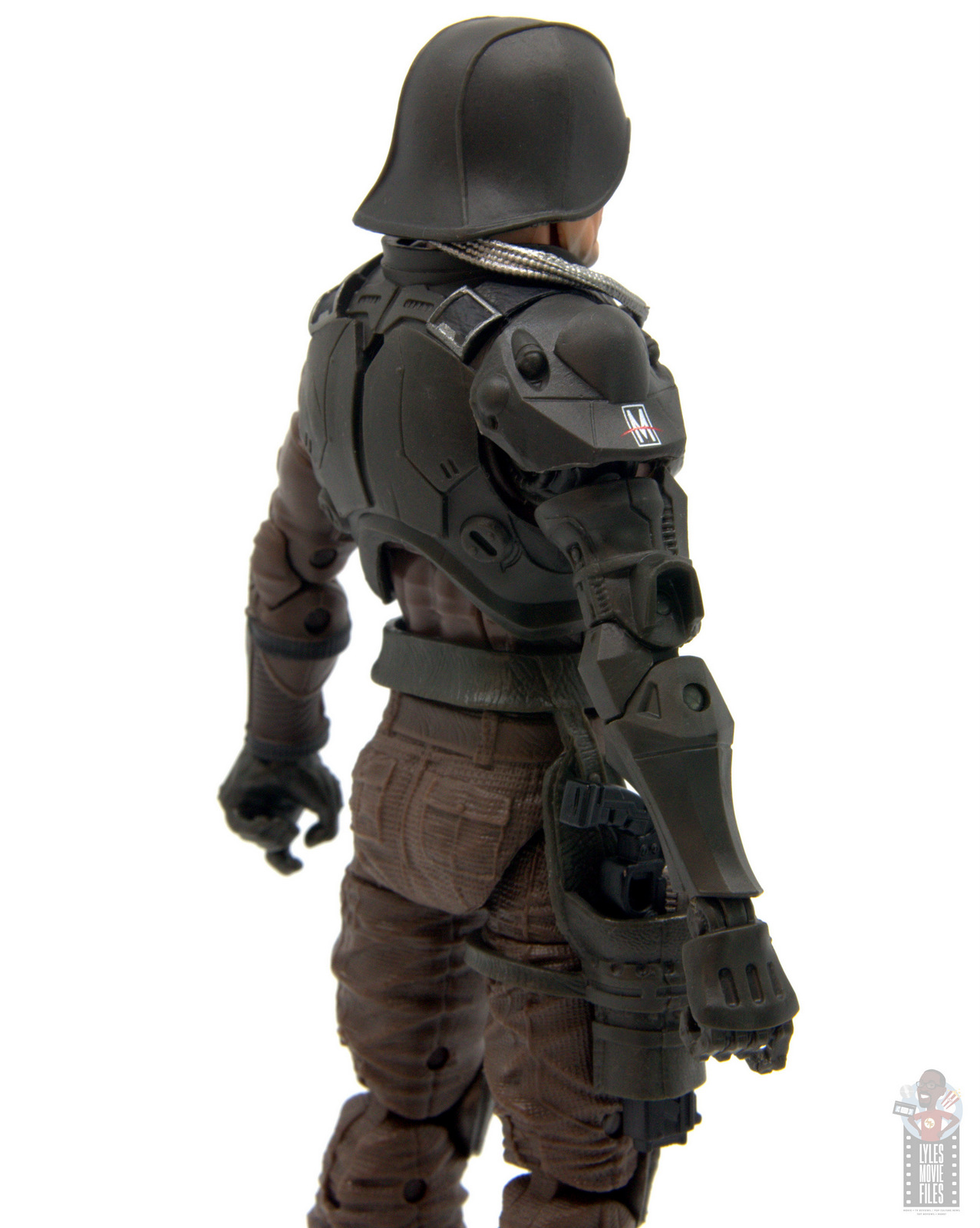 The pants are a reuse of the Cobra Trooper/Duke mold. I’ve been impressed by the amount of mileage Hasbro has gotten out of this pant mold without it feeling like a rip off. It’s just sensible reuse allowing for more intricate and unique sculpt work on other areas. 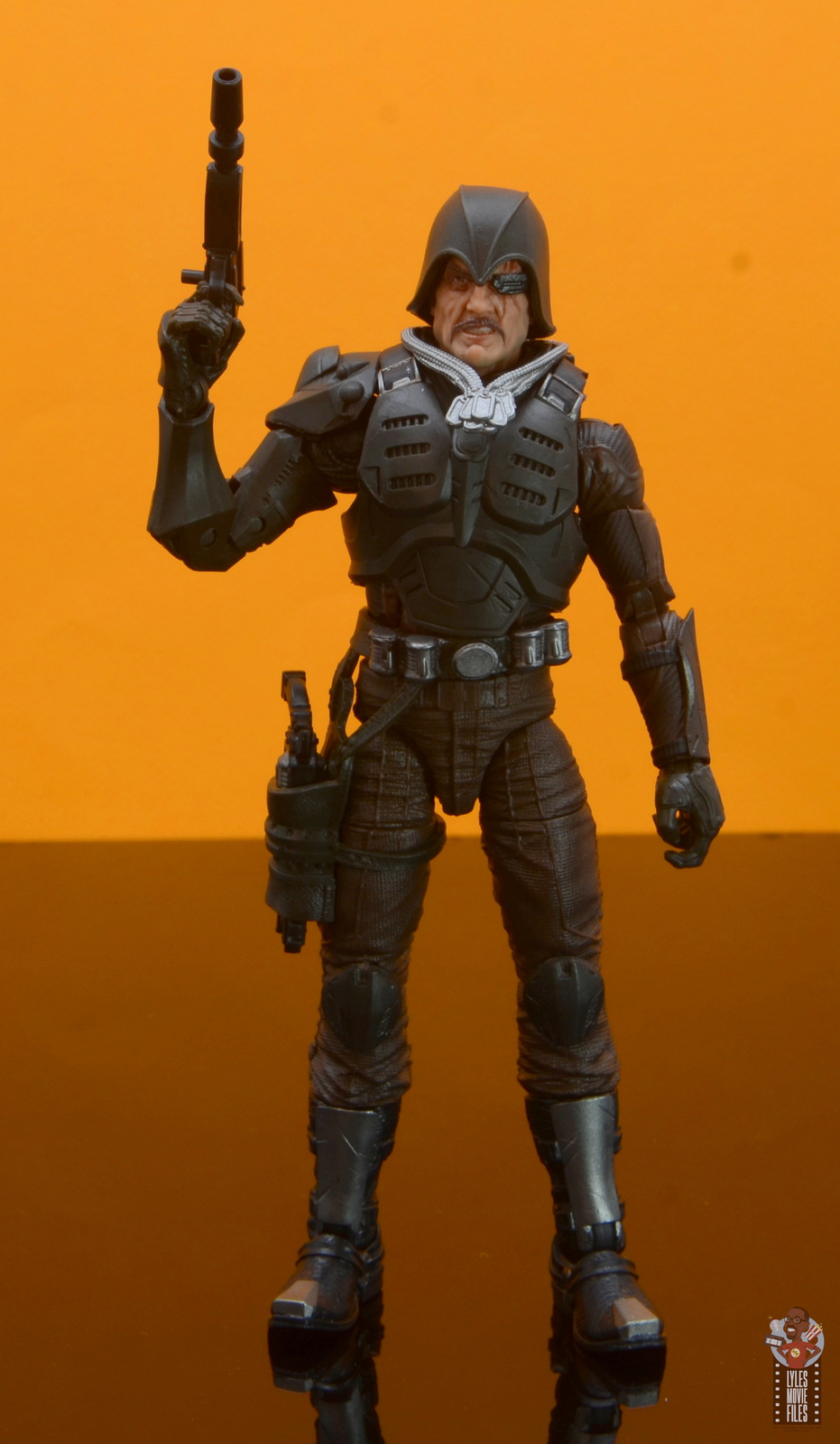 Paint: Major Bludd isn’t a flashy dresser as he basically rocks a dark brown outfit. He leaves that for Pimp Daddy Destro. That doesn’t mean Hasbro mailed it in with his paint job. 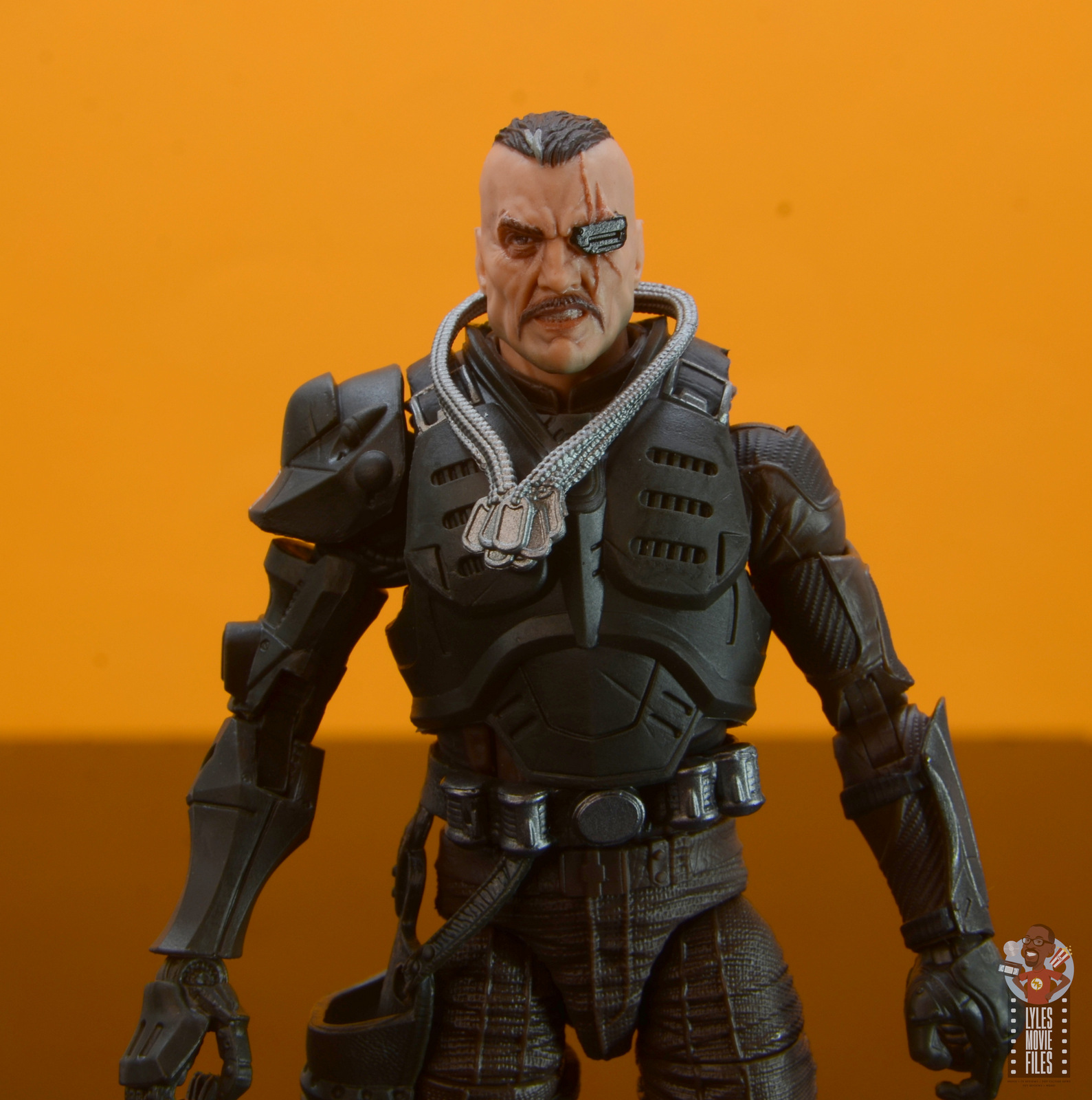 The detail work on the scars is amazing as the red really highlights the serrated sculpting work. 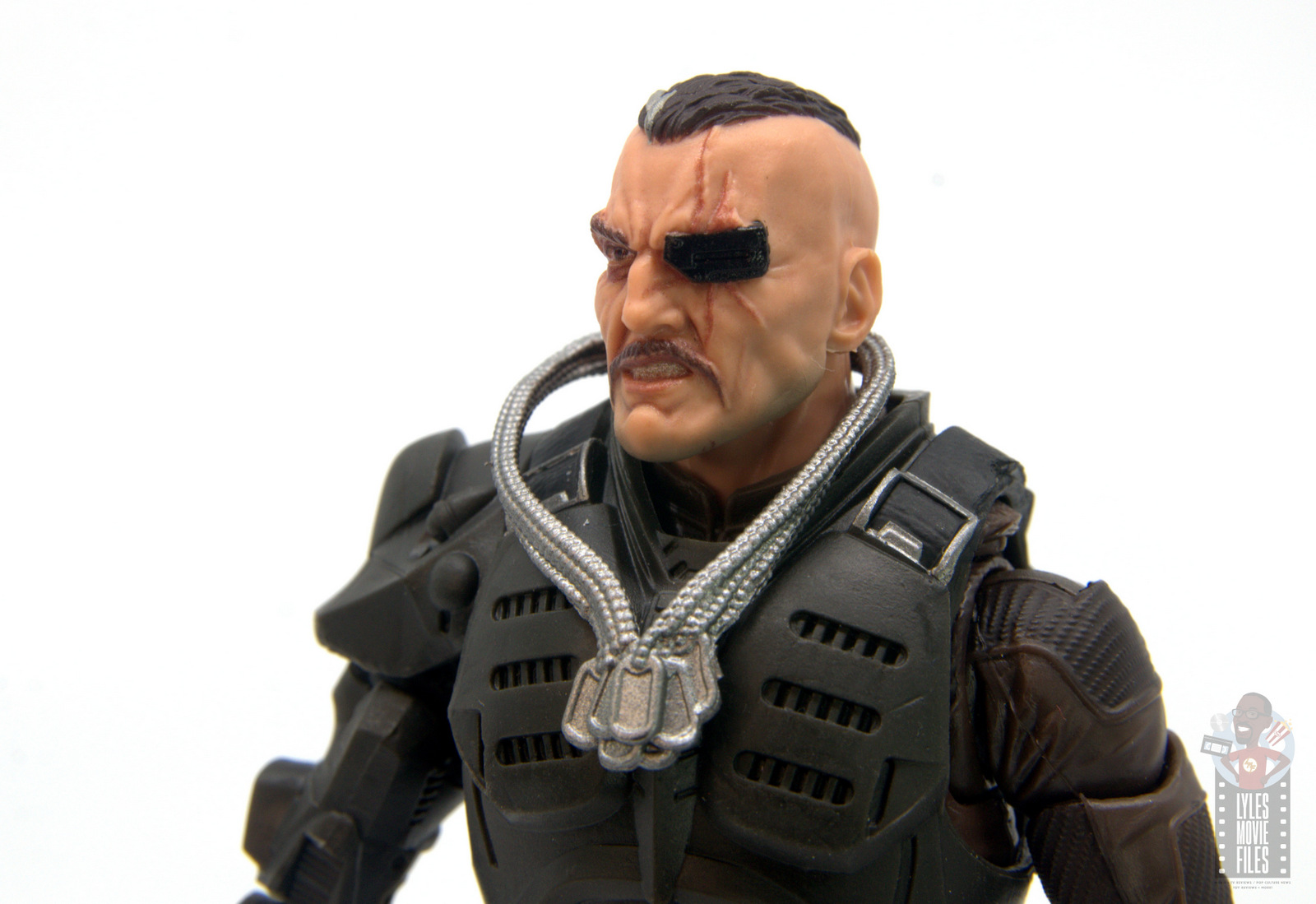 There is some excellent shading for his stubble and I love the touch of white showing up in his hair. 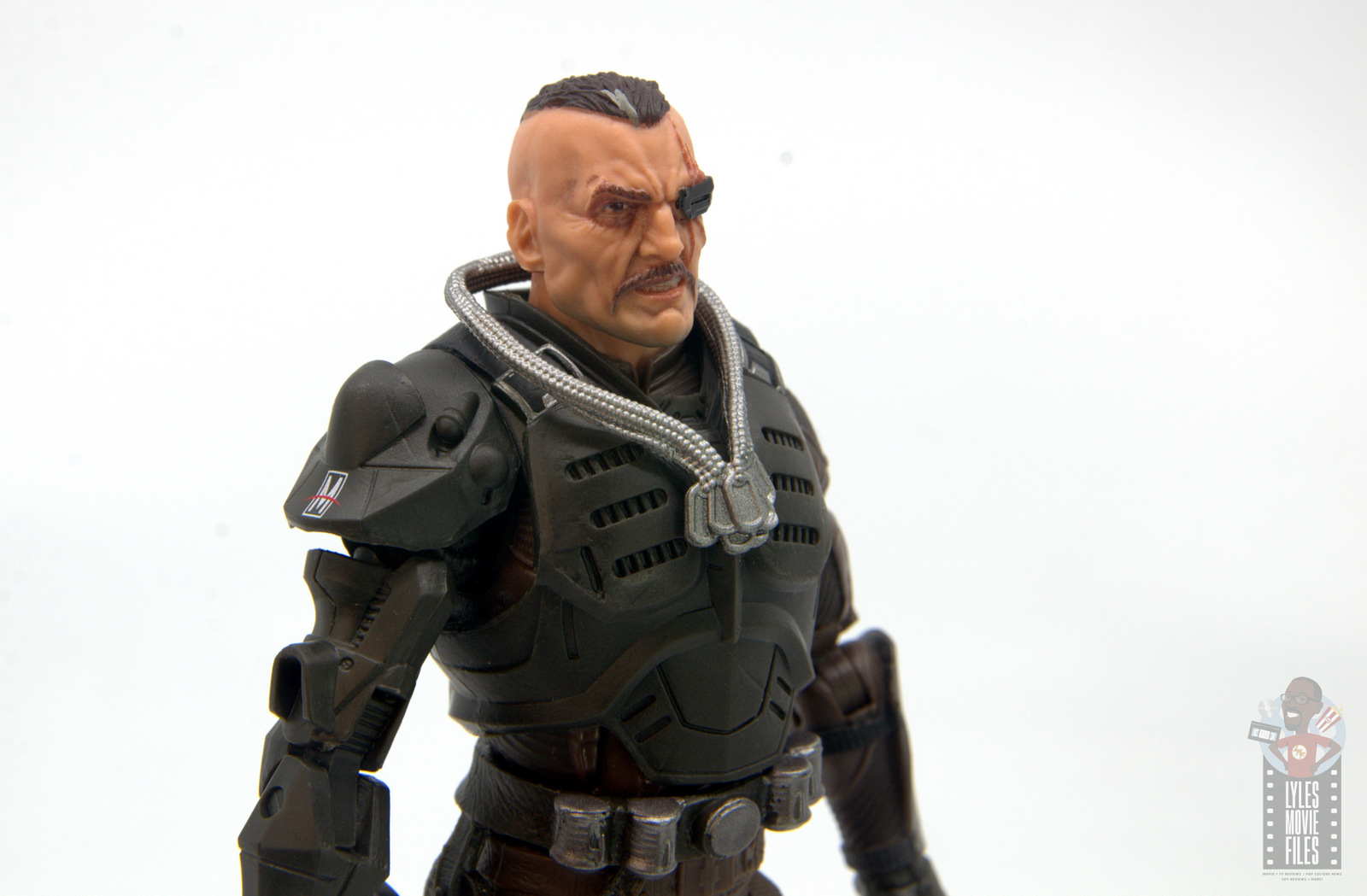 His black armor bits are mostly done in a flat black with some very sharp gunmetal silver applications for the body armor straps, belts and boots. The dog tags have a cleaner silver without making them look too cheap. 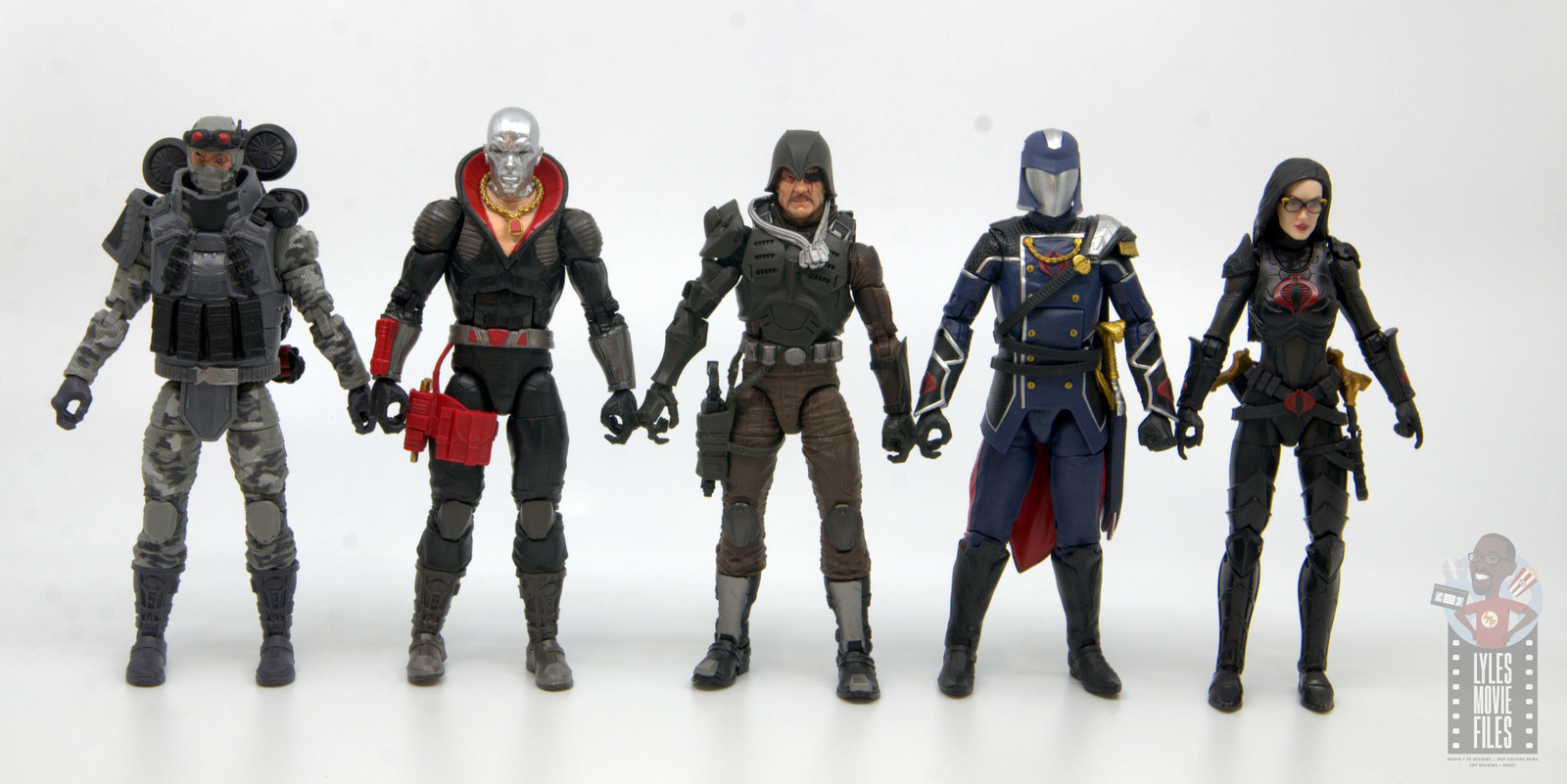 Scale: Major Bludd come in just a little shorter than Duke without the helmet, which is perfect. 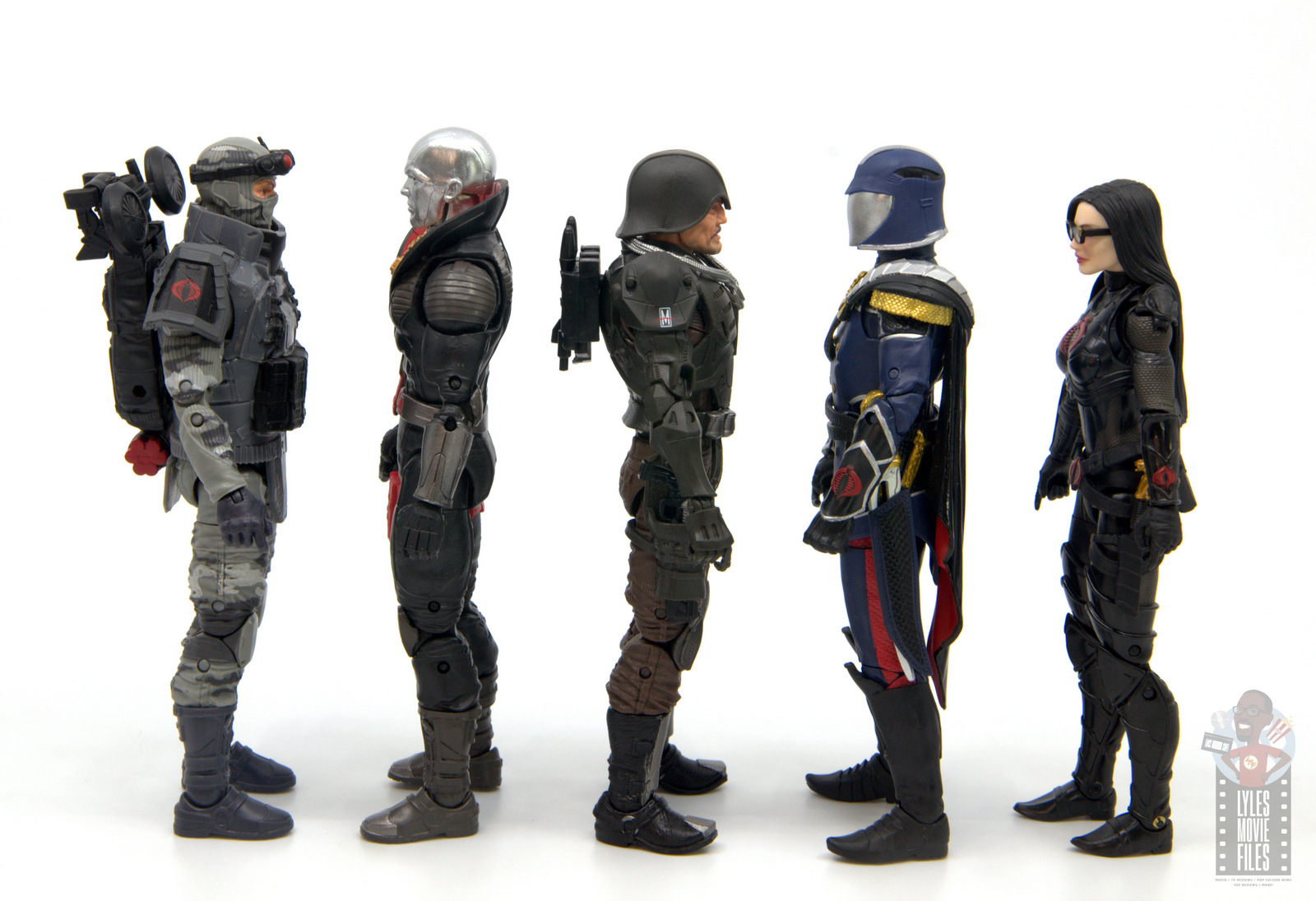 Articulation: You can get a ton of fun poses out of Major Bludd. His metal arm has pretty smooth articulation and it seems like Hasbro is working out the kinks with overly stiff joints. 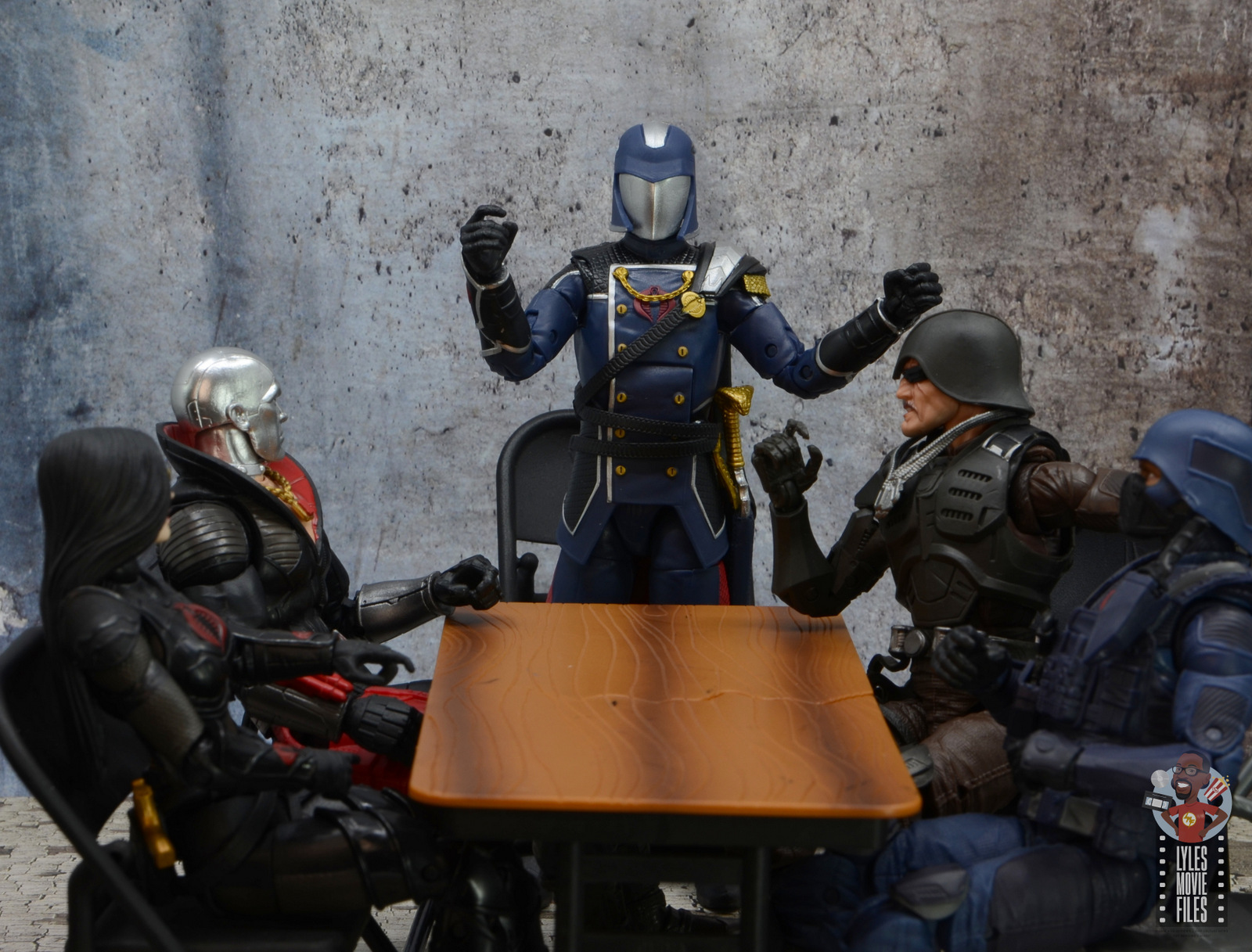 Even better, Bludd’s armor is positioned above the ab crunch so you don’t miss out on that articulation like you do with figures like Flint and Beach Head. 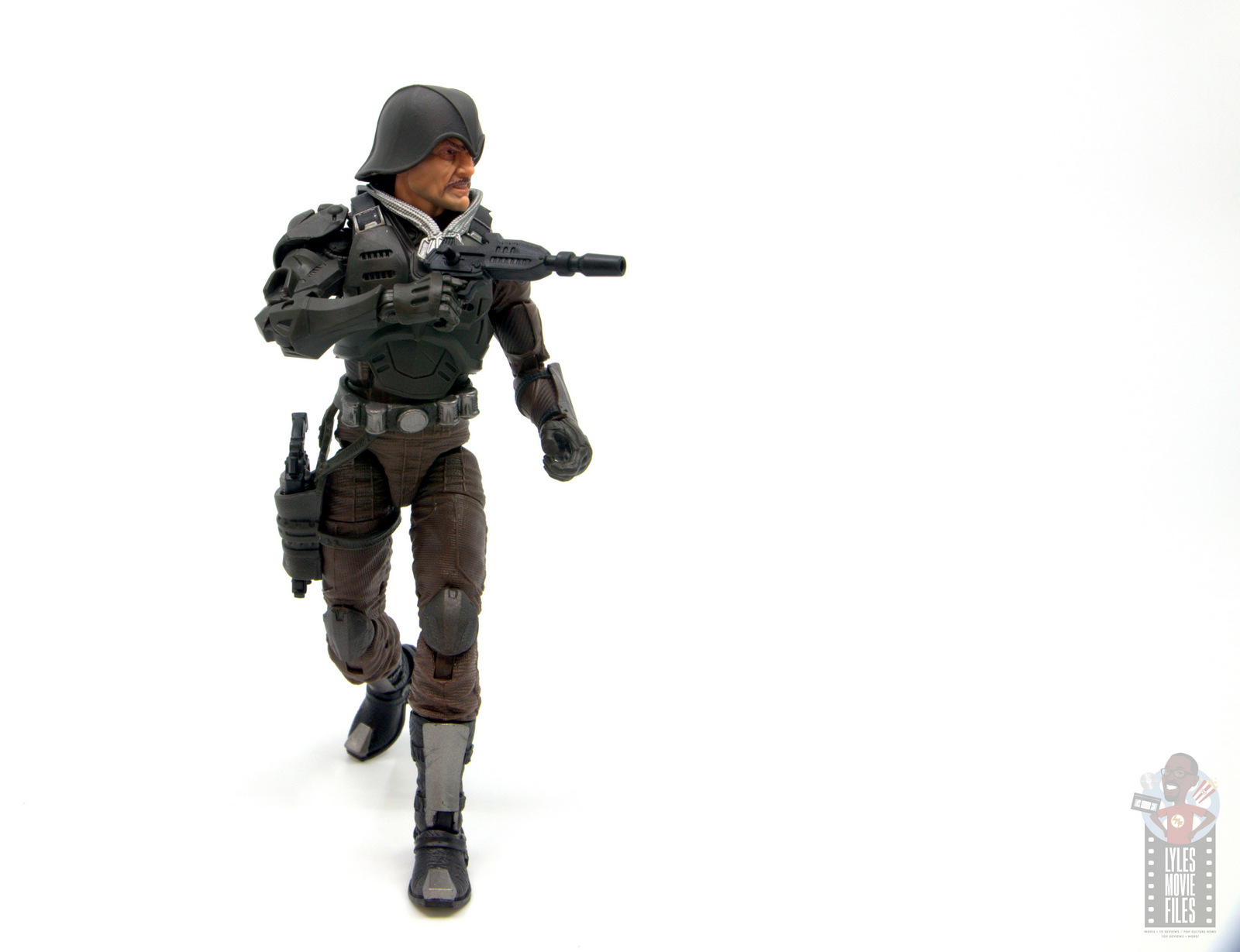 The only trick with him is keeping his backpack firmly in place while posing and not knocking the helmet off while fiddling with him. 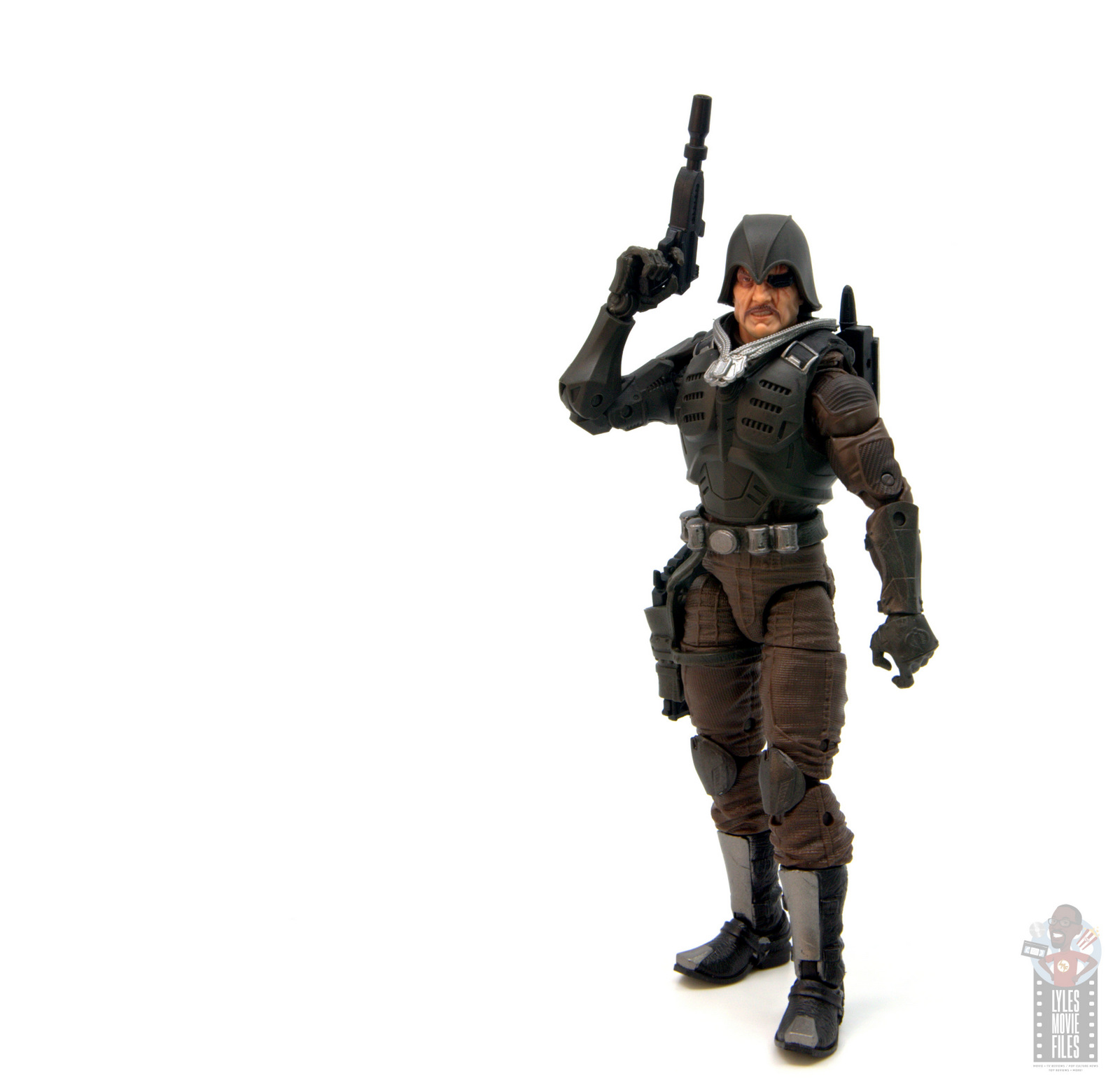 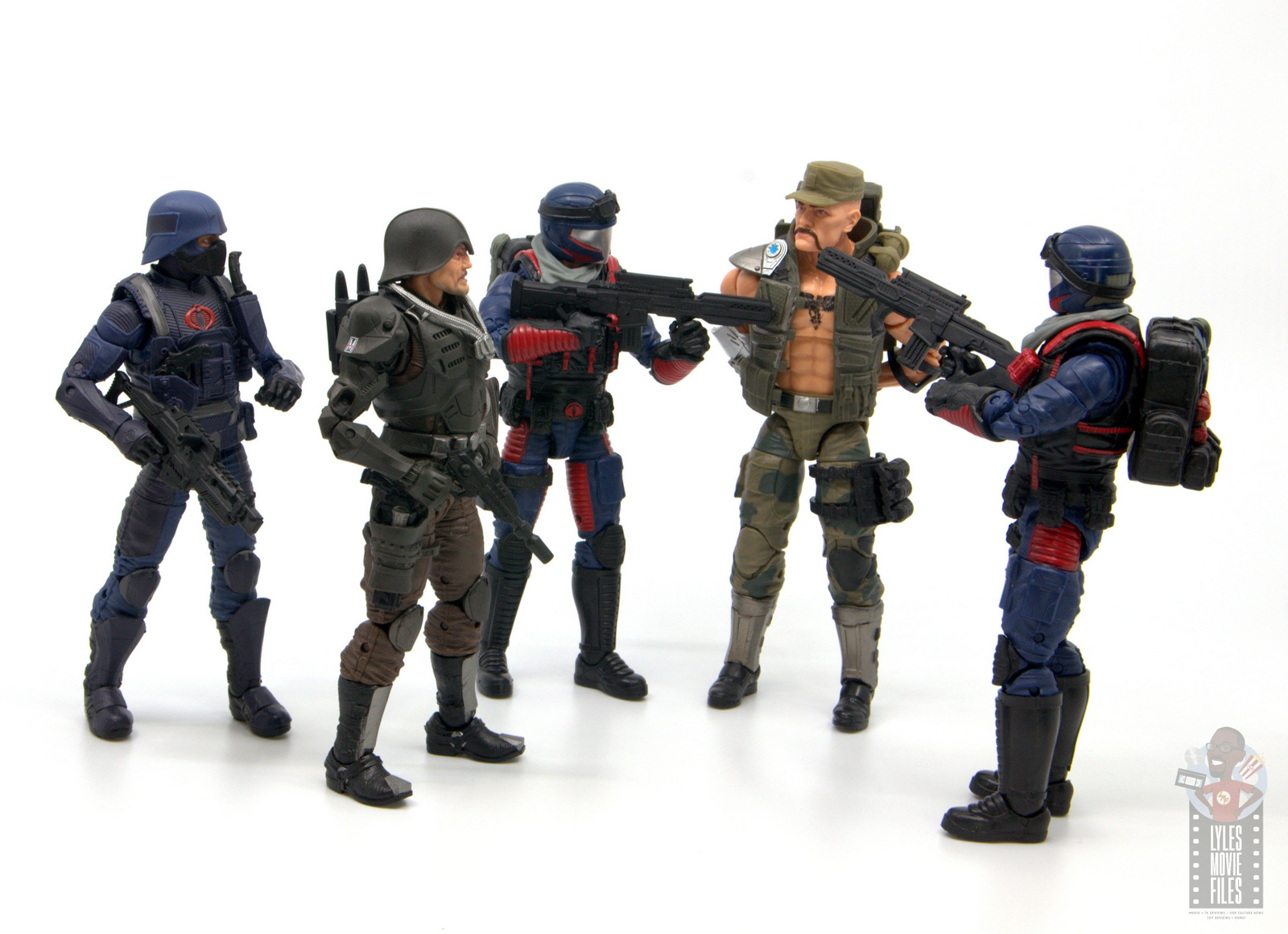 Accessories: Major Bludd is loaded up with gear too. 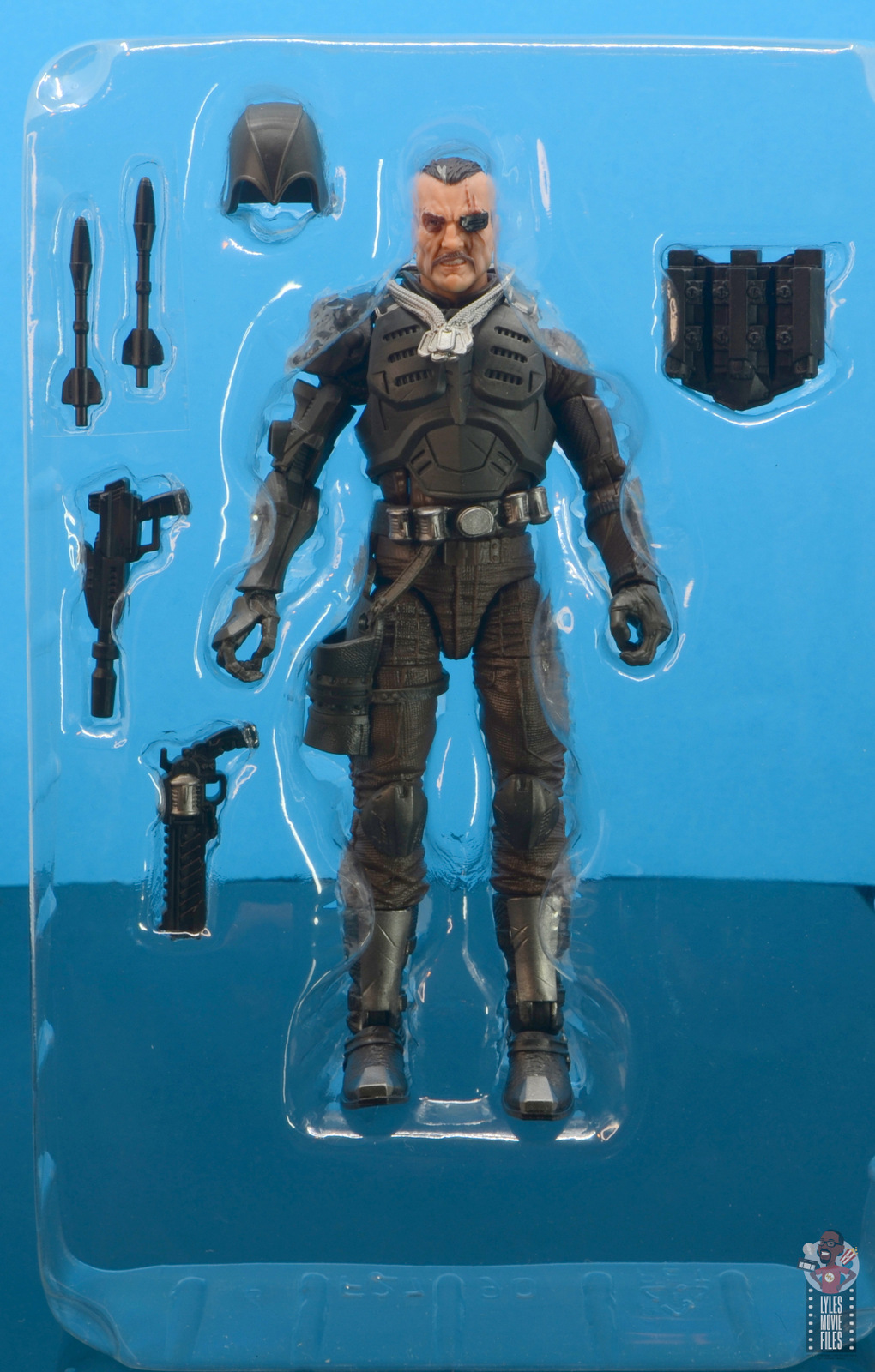 He’s got a blaster that looks to be a very close approximation of his original RAH gun. There’s also a larger revolver — likely for the kill shot. 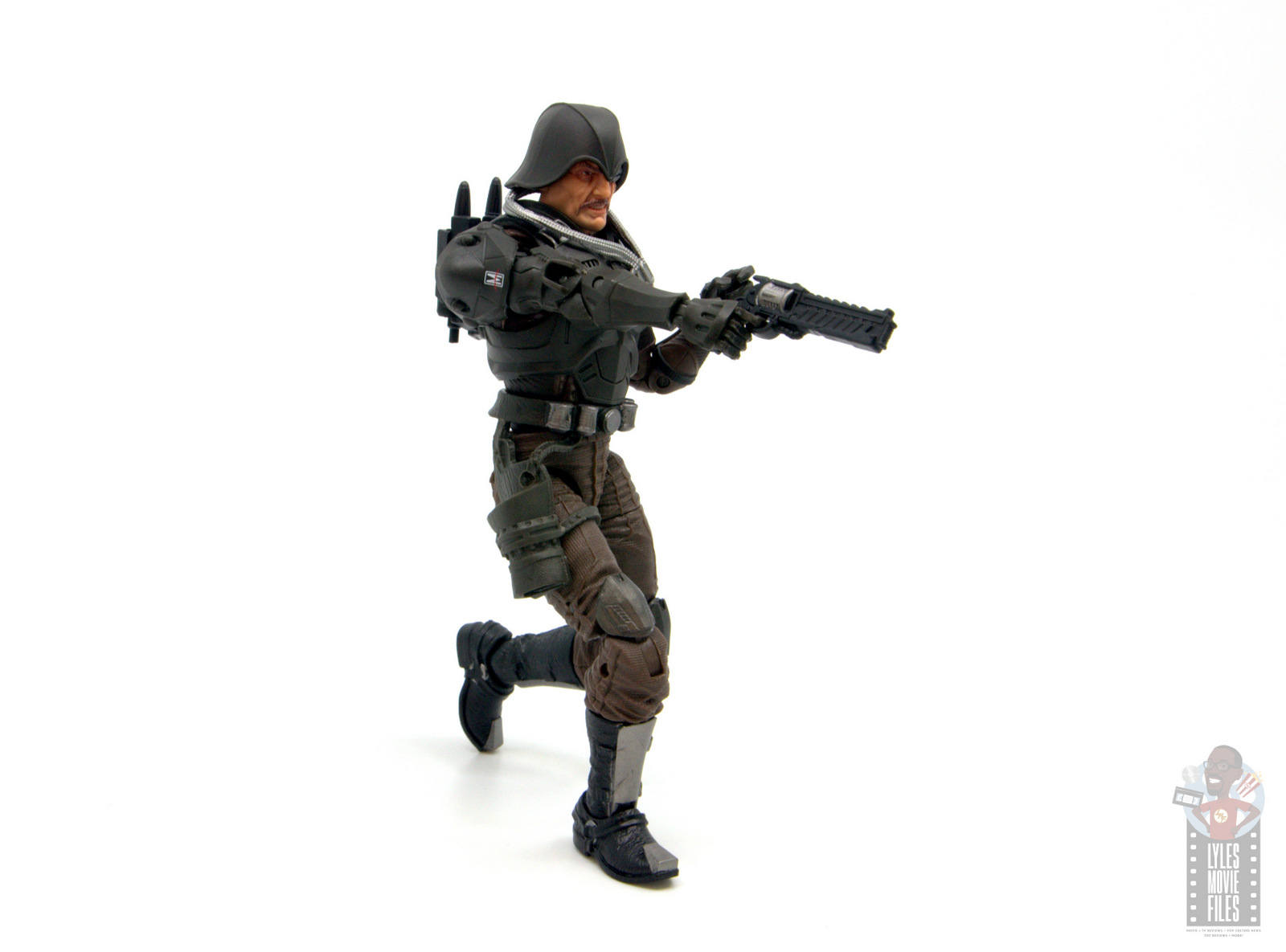 His crowned helmet is removable and I love that the design retained the three point visual. Major Bludd also has his vintage backpack complete with two removable rockets. 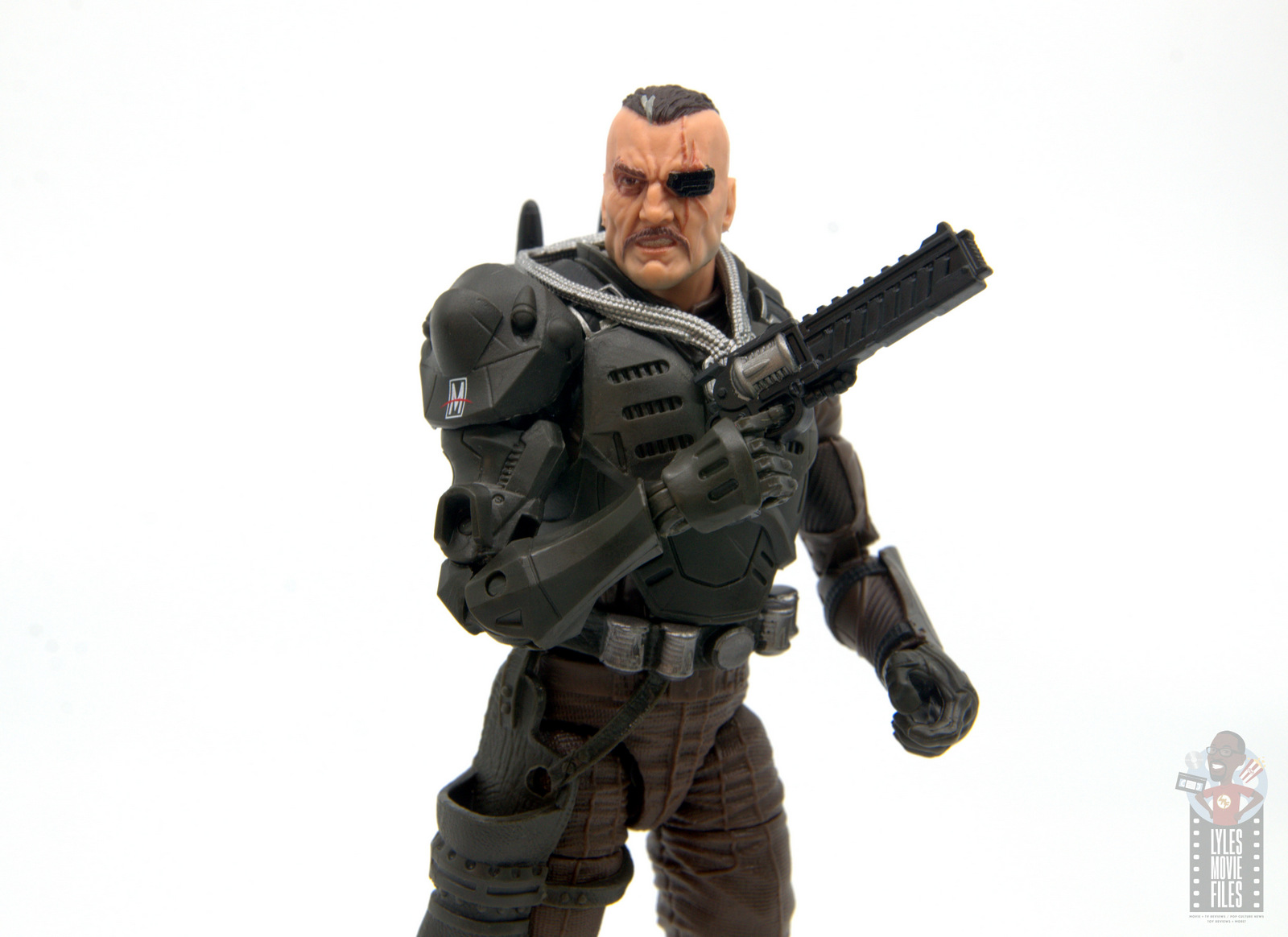 There is a lot of faithful elements with these accessories and it is definitely appreciated.

One rocket can plug into the classic blaster. 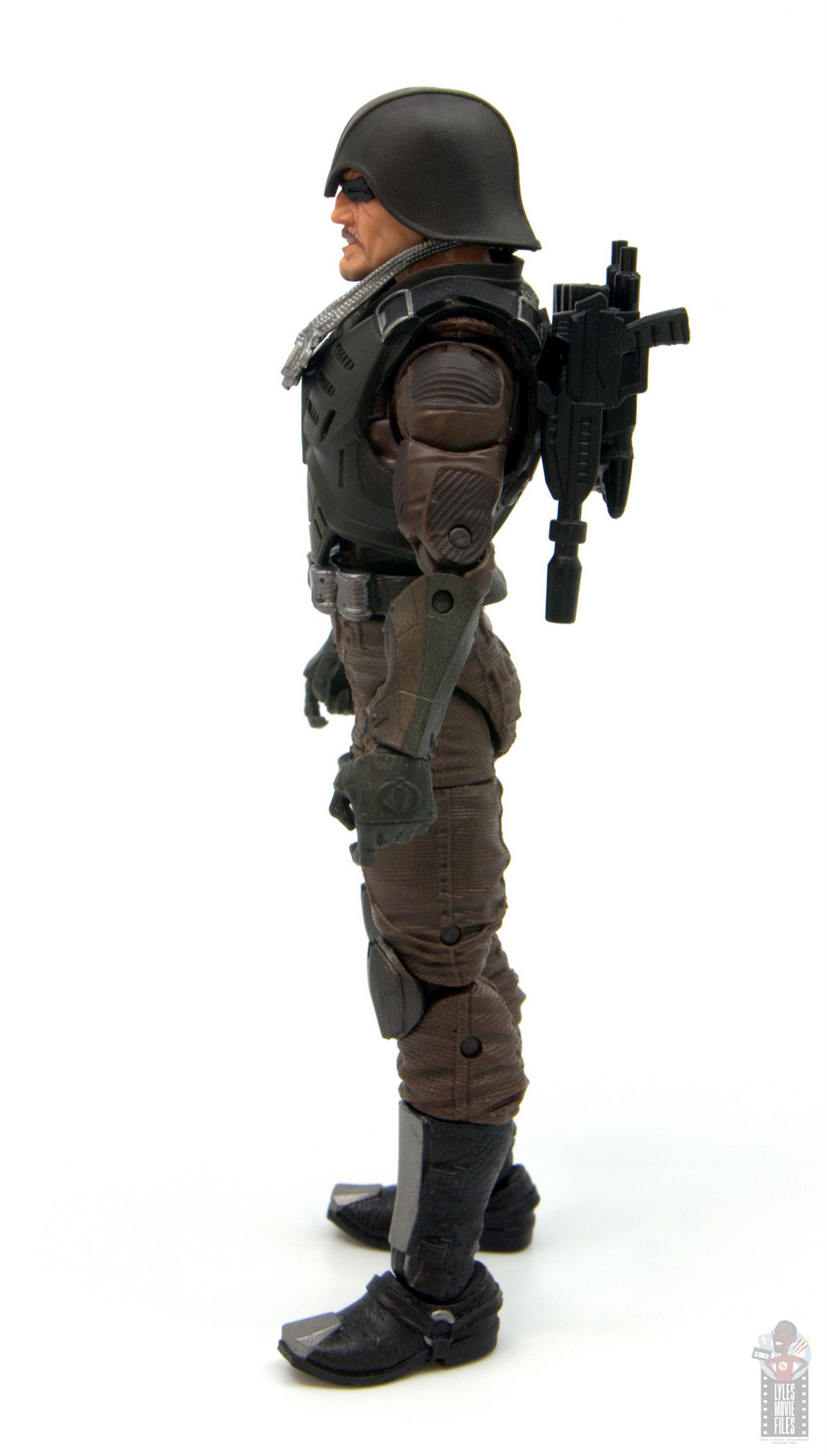 They both can fit into the backpack although they dislike actually staying in place after the slightest bit of movement. 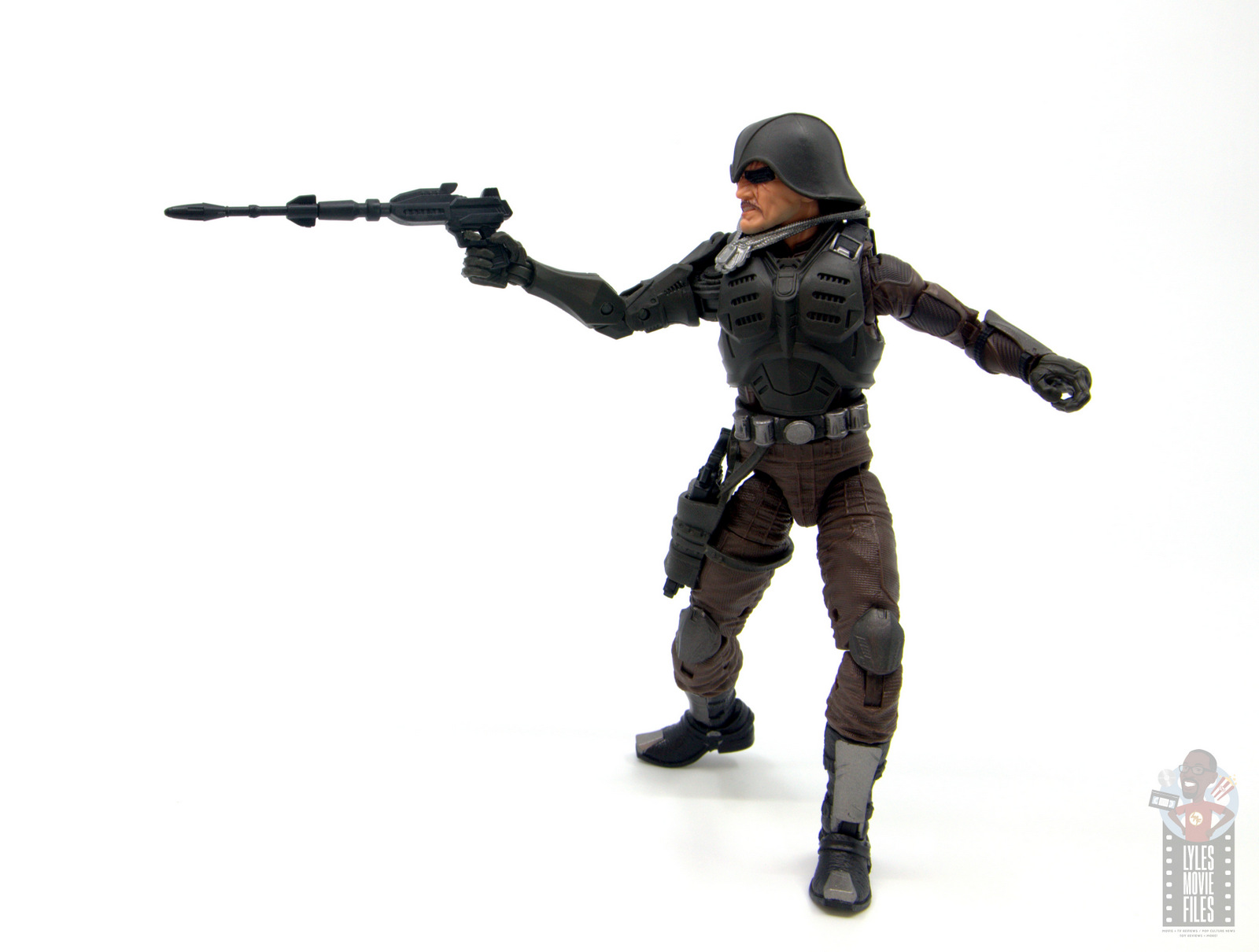 Worth It? There’s not a lot of lines out there that are a better value than the Classified Series. It’d be hard to say Bludd doesn’t feel worth every penny of the $20.

It really feels like Major Bludd benefited from Hasbro working out some of the earlier kinks with the line to deliver possibly the CS figure to beat for 2021. 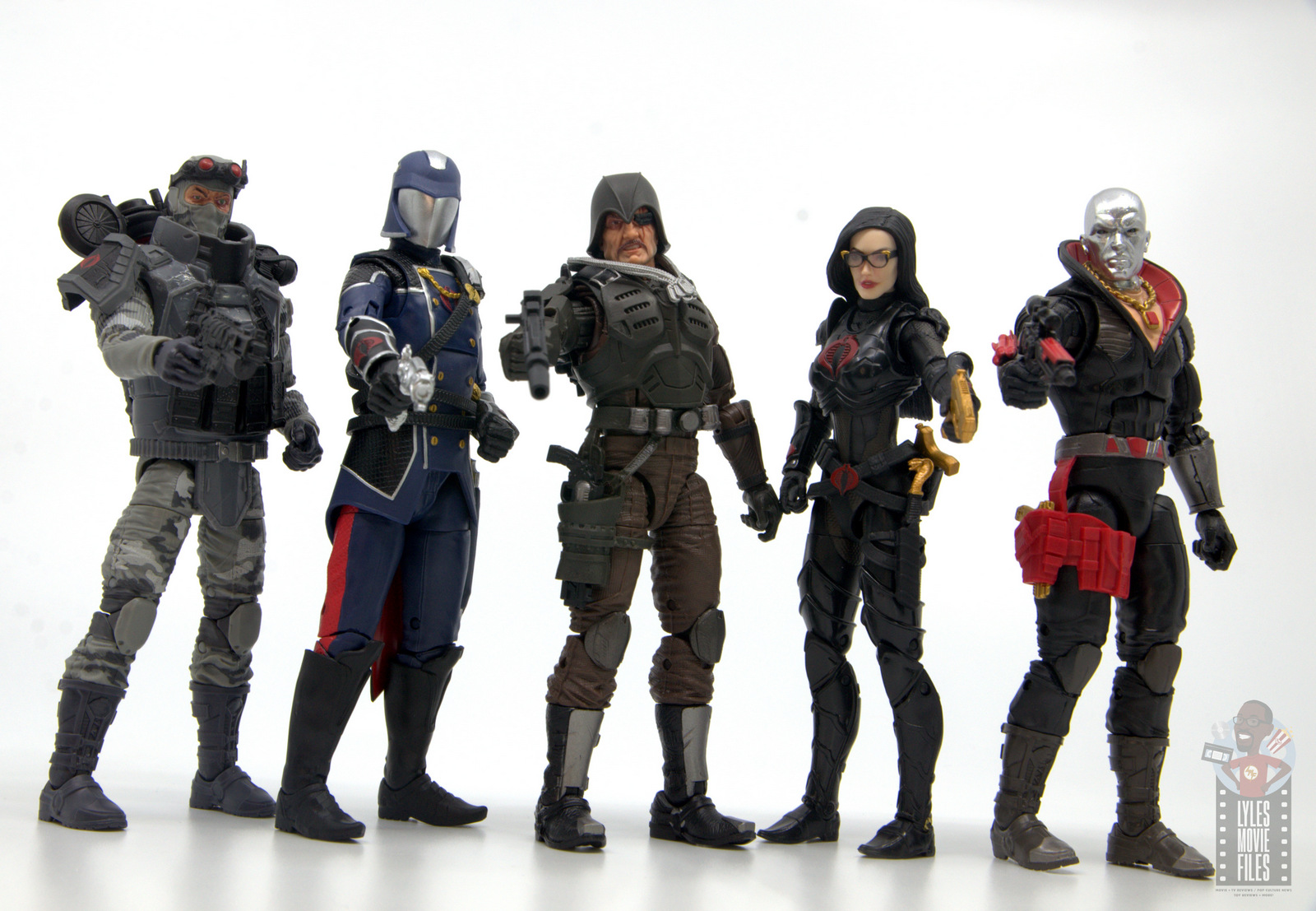 Where to Get It? Cobra Island figures are exclusive to Target, but Target has done a far better job of stocking him on shelves and he has been pretty regularly on Target.com if you’re not having any luck in stores.