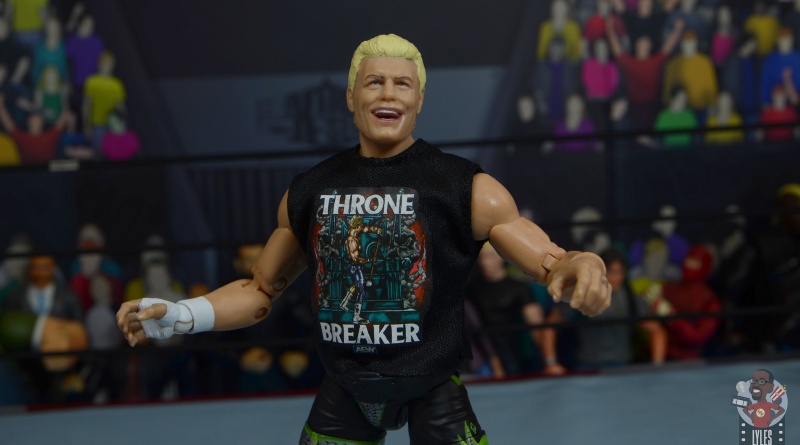 When Wicked Cool Toys/Jazwares debuted its AEW Unrivaled line they quickly became impossible to find on shelves. That was due to the popularity of the brand as the figures were good, but each one had some flaws. Cody was maybe the biggest offender with a pale skin tone and lackluster accessories.

Fast forward to Wave 4 and WCT/Jazwares looks to make good with another take on The American Nightmare. Let’s see if this version is more of a dream figure.

Packaging:  Same deal as always here with the Jakks-esque presentation box shape and black with gold accent colors. It definitely stands out on the pegs now that I’m seeing them semi-regular on the shelves.

The side portrait isn’t very useful in making out the character thanks to the small portrait and the right side would benefit more from having the character name instead of AEW.

I do like the image of Cody in his actual ring attire reflected with the figure, but really wish WCT/Jazwares would include some form of a bio for these guys. 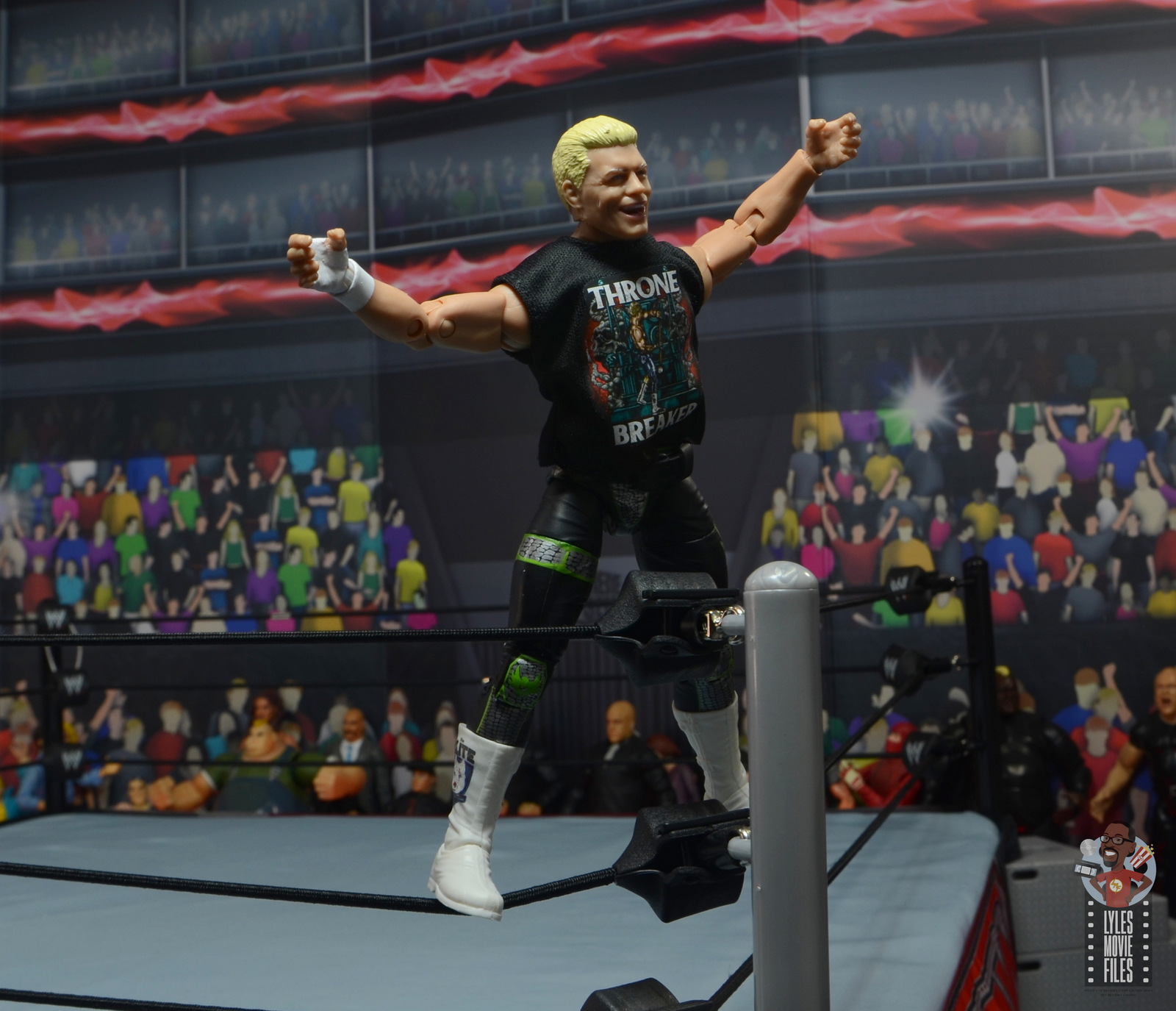 Likeness:  I didn’t think the cold sneering expression was the best choice for Cody with the first figure. For this one, we get more of a default look with Cody smiling wide like he’s saved wrestling all over again. This is more fitting for a standard Cody and the sculpt is fantastic. 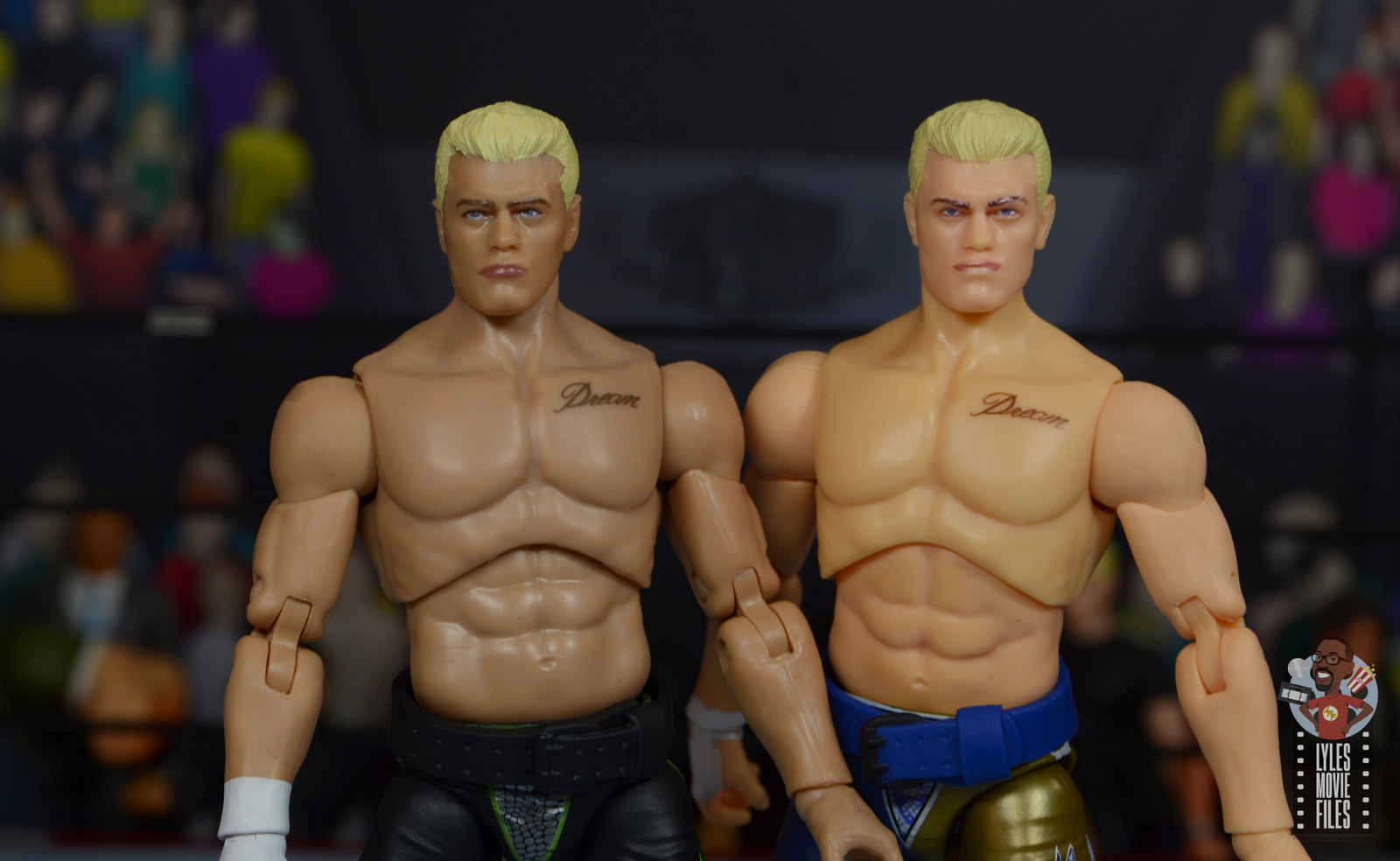 Head sculpts were something I thought was going to be tricky for this line especially early on, but the likenesses have been there. Expression choices? That’s a different matter, but at least the figures resemble the wrestler save for Riho. 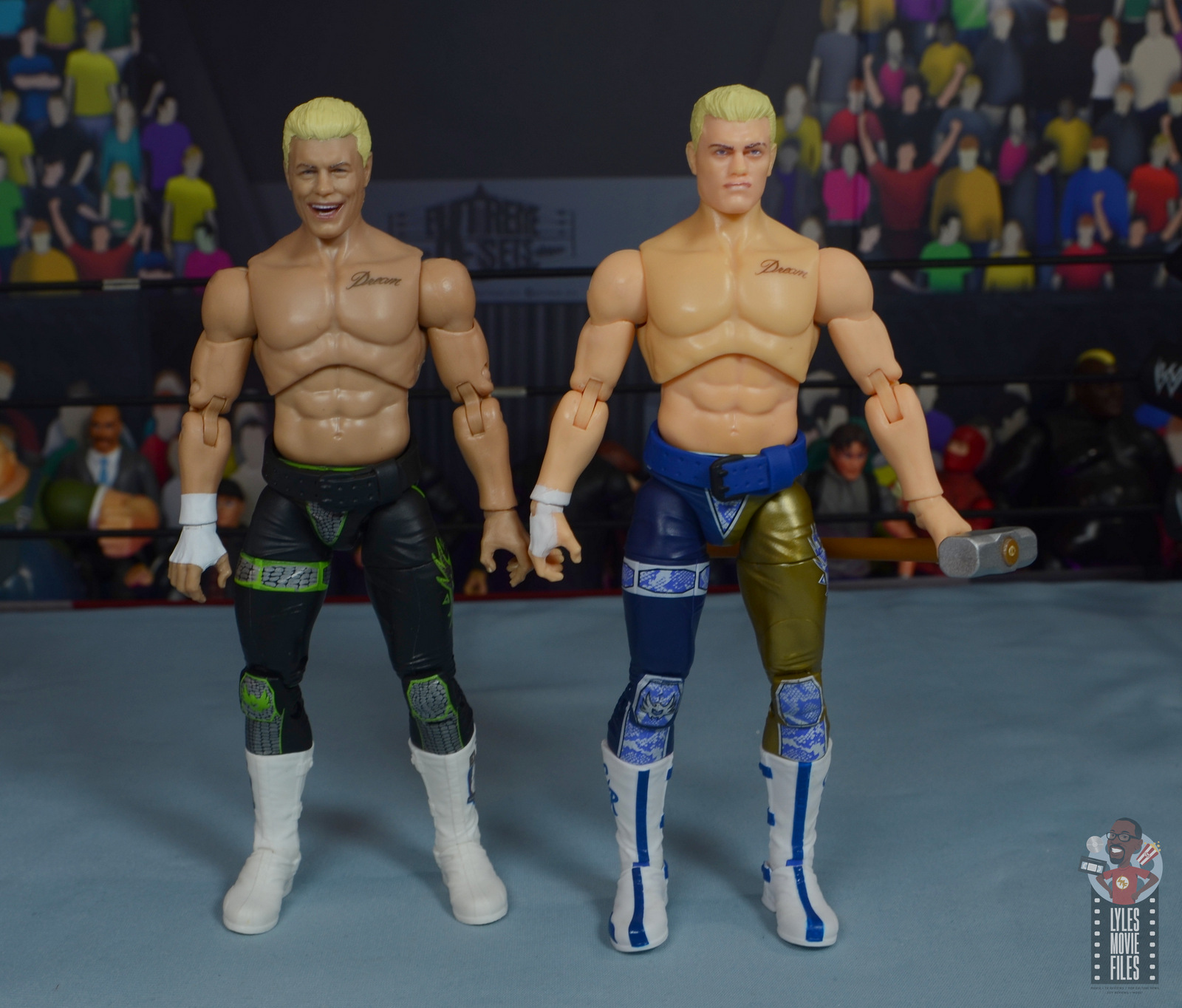 WCT’s basic Unrivaled body matches up well with Cody. With Cody putting in more time in the gym, the abs aren’t so much aspirational as accurate these days. The arms have the right amount of definition and the torso looks just right — not too thin or too thick. 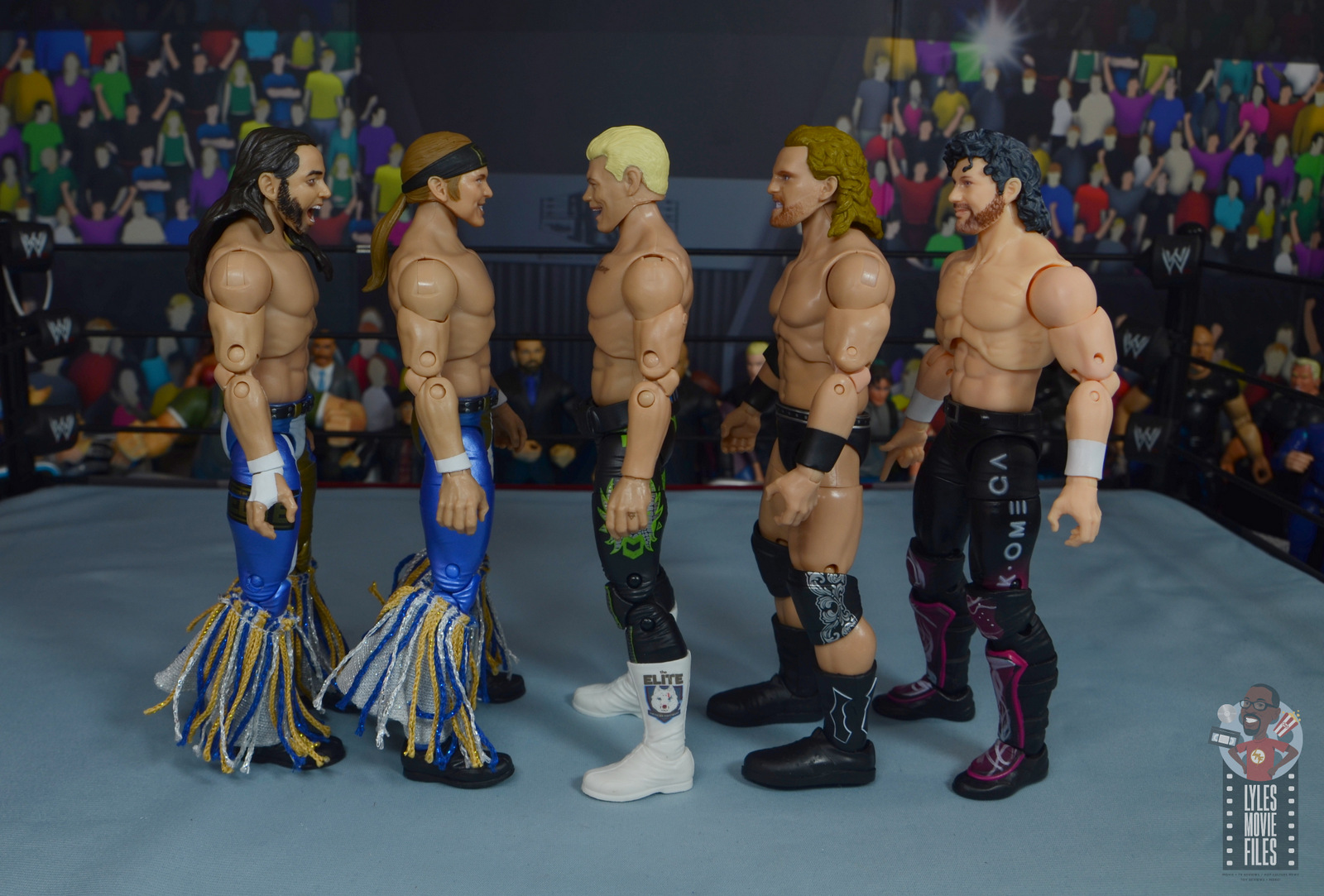 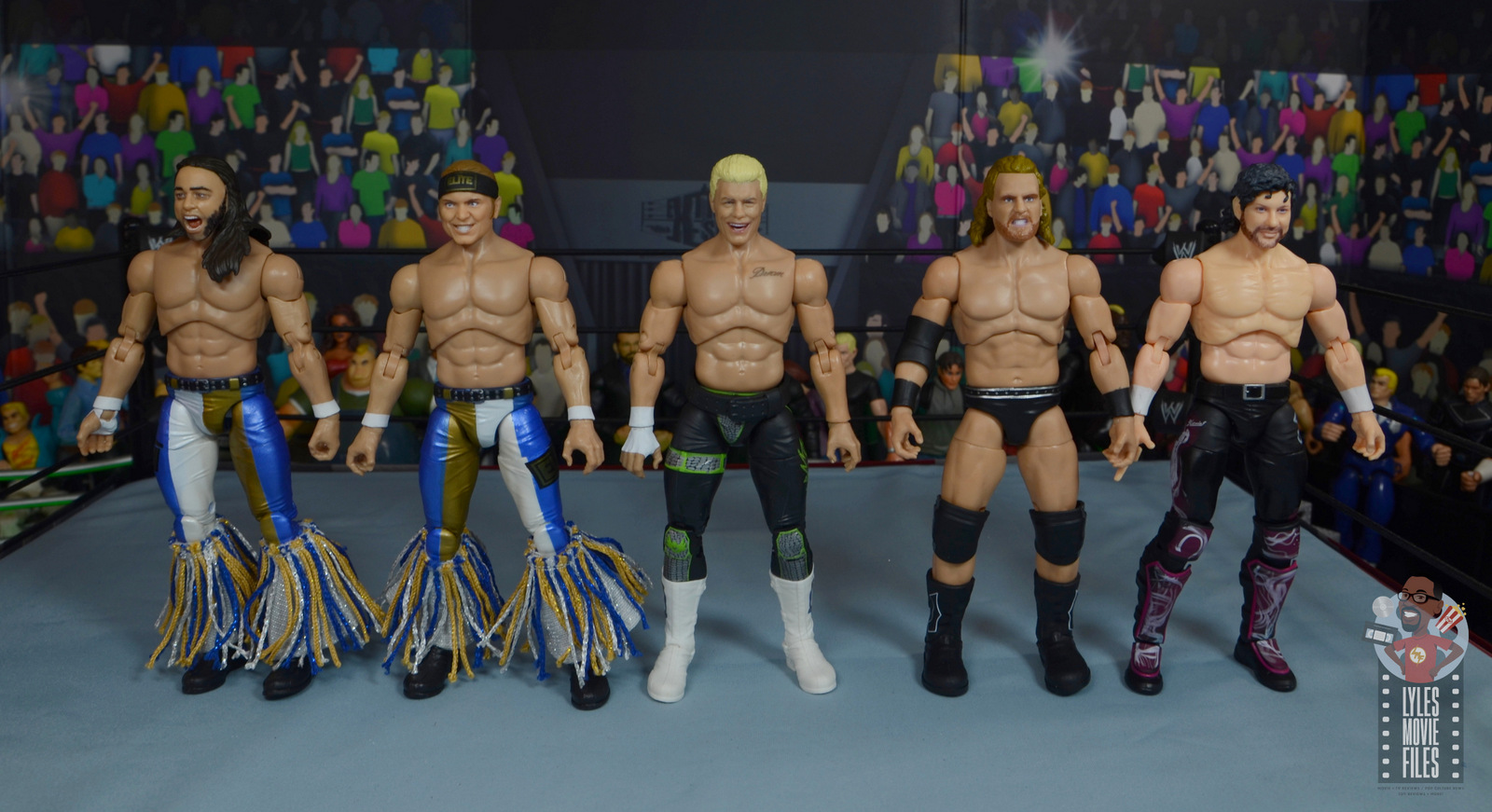 Paint:  WCT already made good on correcting the first batch of nightmare pale shade skin tone Cody figures, but I wanted to get this one since it’s likely the last we’ll see of Cody without that garish neck tattoo.

We do get one of Cody’s oddly placed tattoos with the Dream over his left pec as well as his left finger tattoo.

The tight design is solid with basic black and green/silver accents. I like the color combination of the first figure better, but I appreciate WCT/Jazwares making a real effort to make the repaint figures so distinct. This also bodes well for collectors that have a favorite attire since it seems the bigger stars will be in constant rotation in the line. 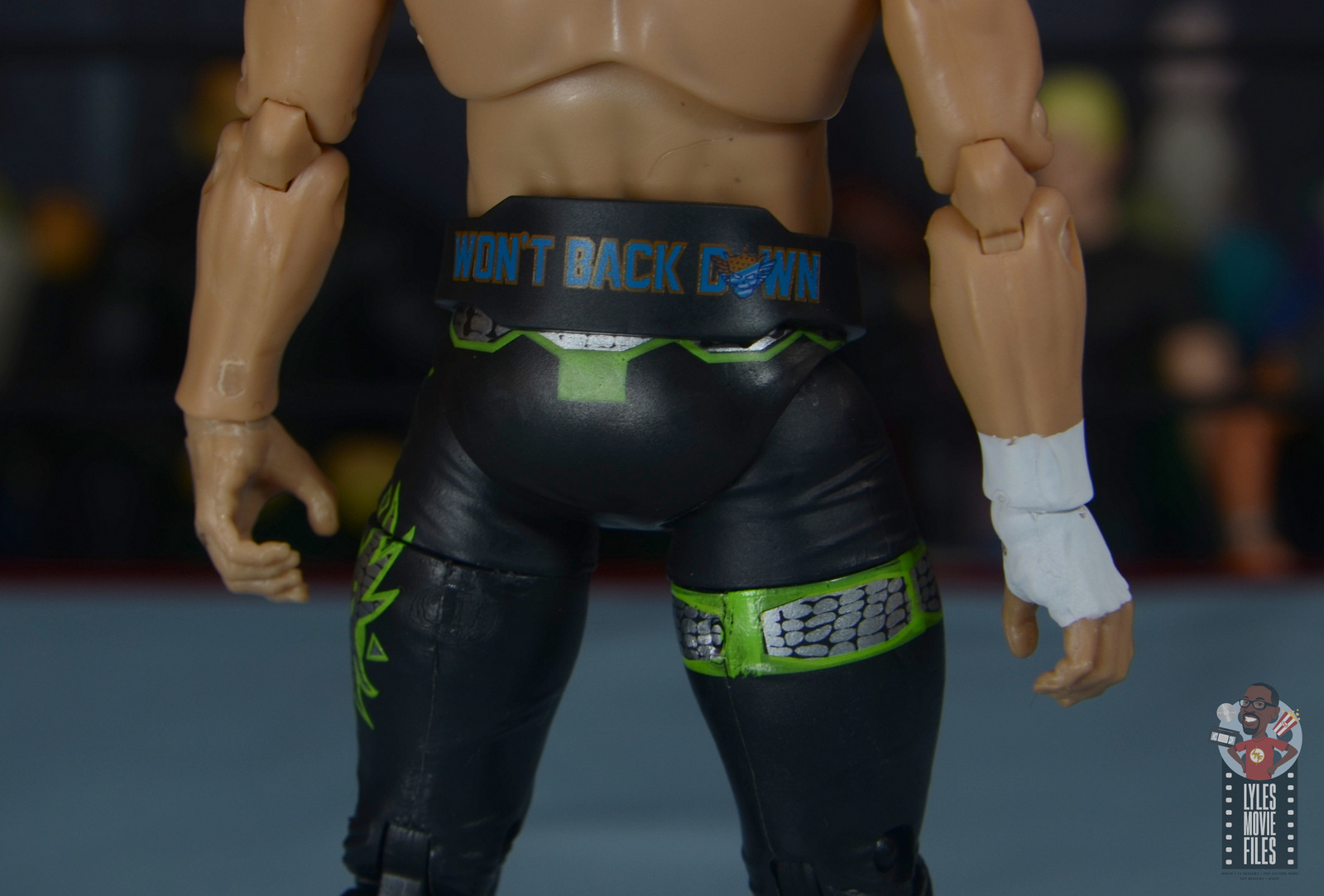 The snakeskin panel pattern turned out nice again and this time Cody’s boot features his dog. 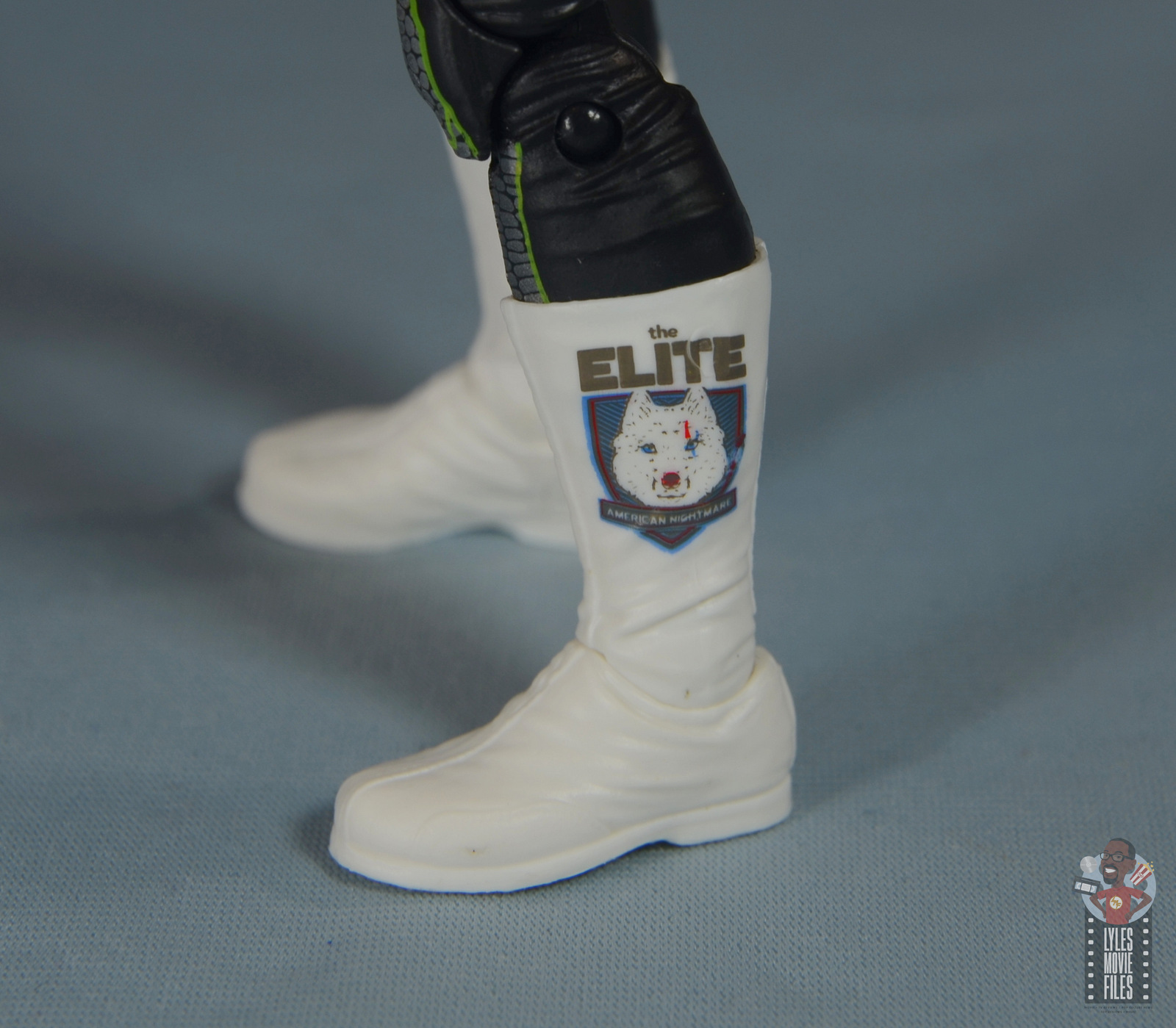 That’s a nice touch and helps to further distinguish this from the first figure. 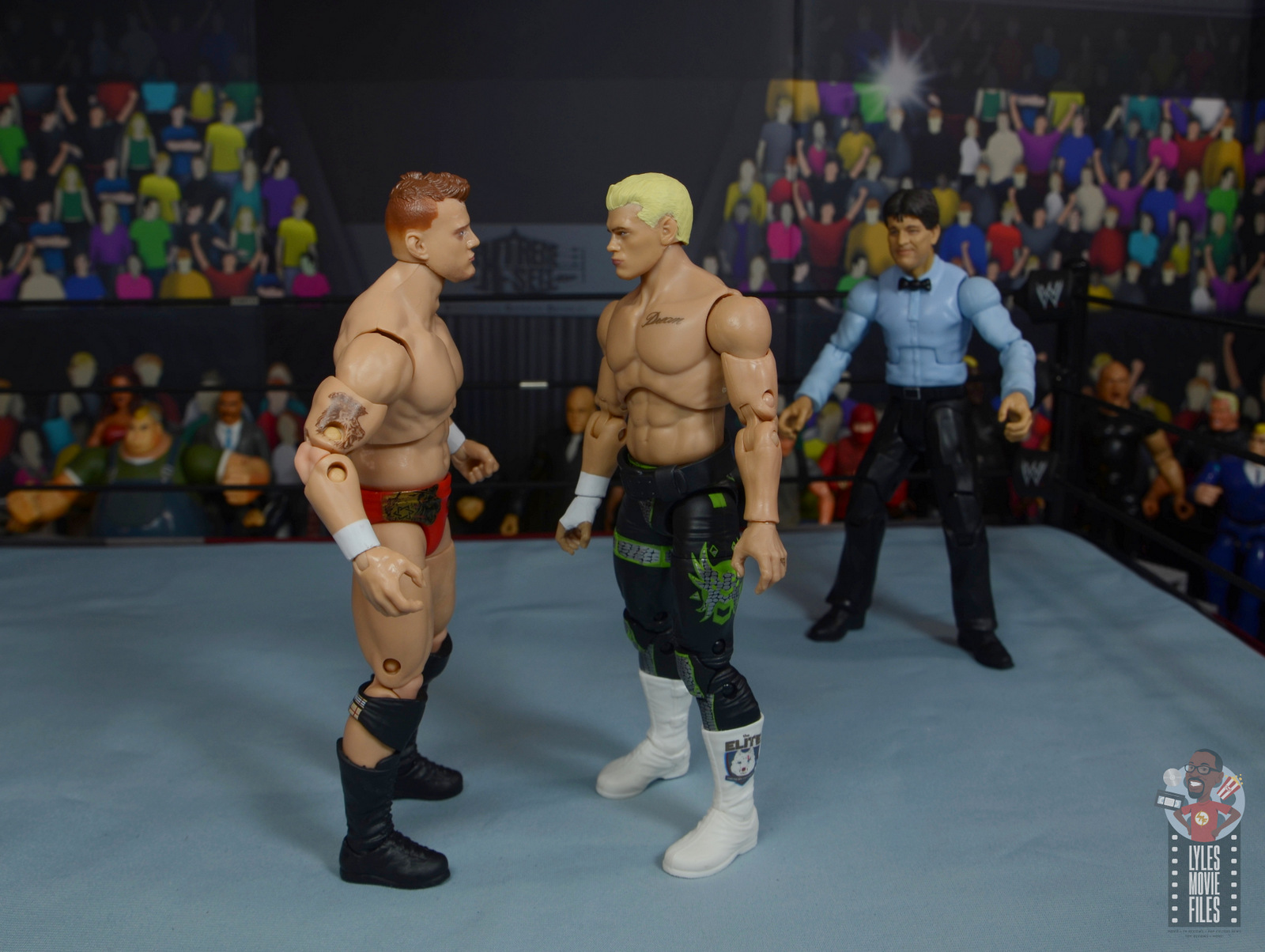 Articulation:  Adding double jointed elbows proved such a major upgrade to the standard wrestling figure body that Mattel had to quickly come on board or else they would be left out. 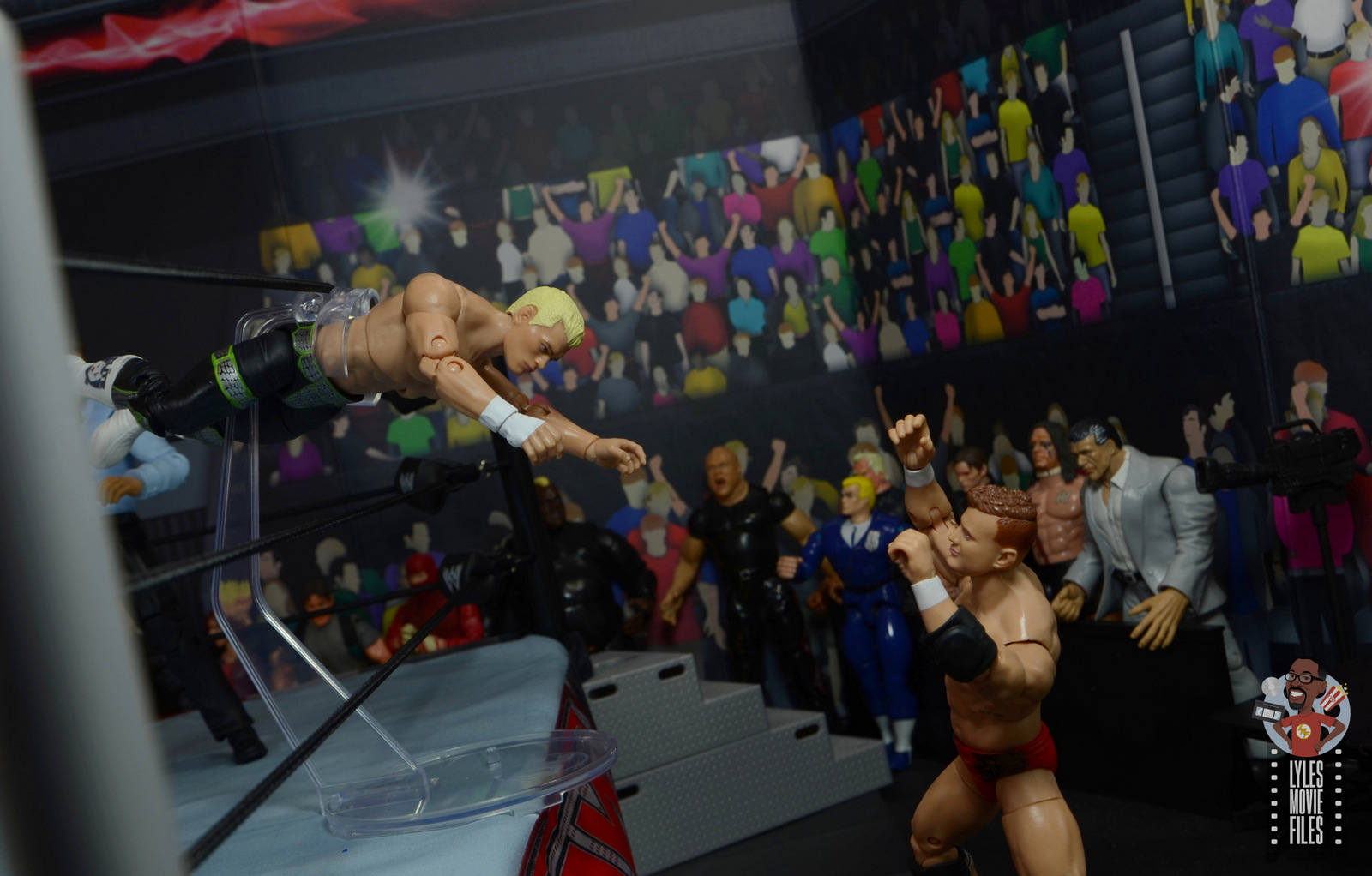 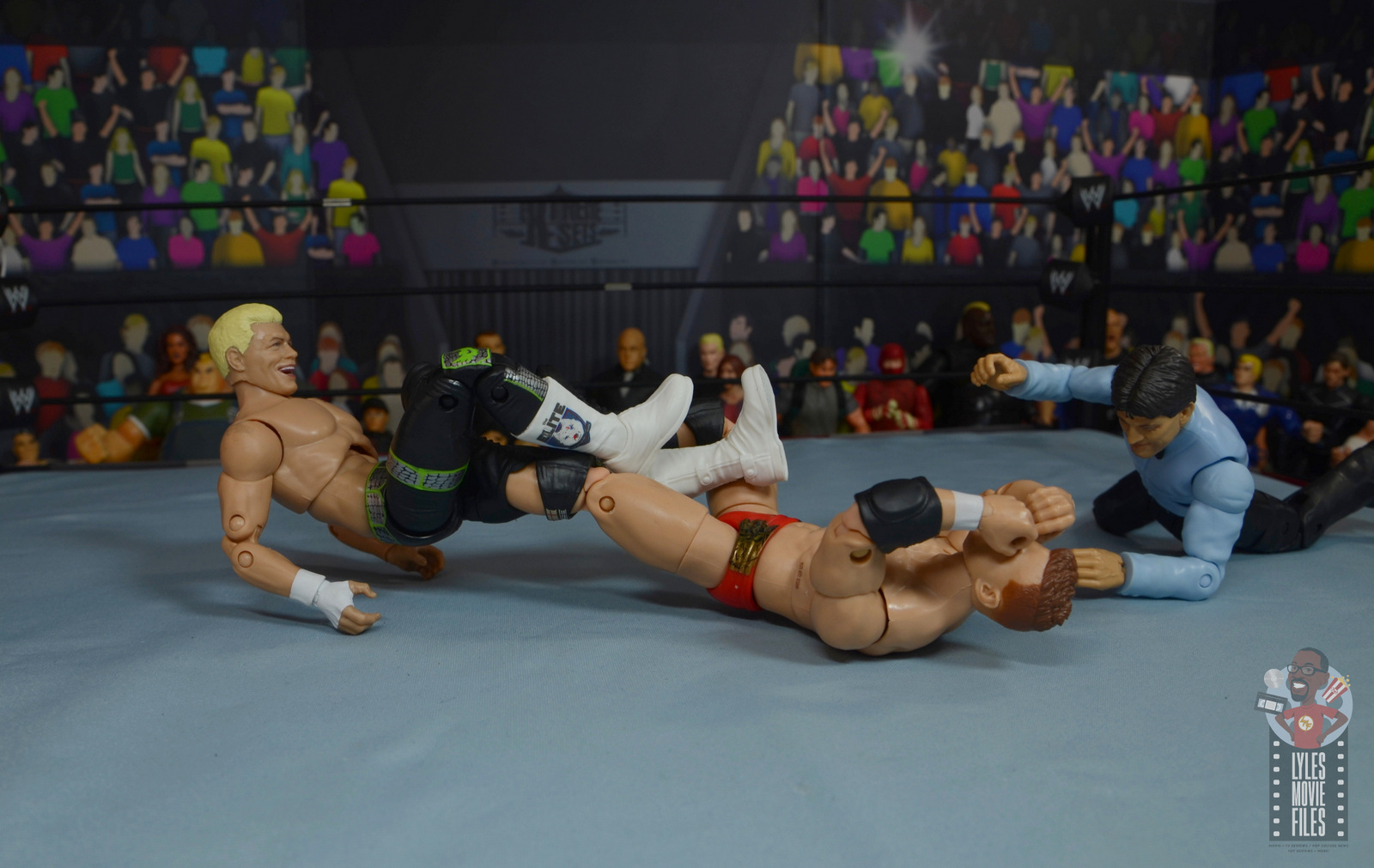 The Unrivaled body still has a few more perks namely the floating torso, which allows for a bit more flexibility in pulling off moves. None of Cody’s moves are that hard to pull off although butterfly shoulders would help the authenticity of submission moves. 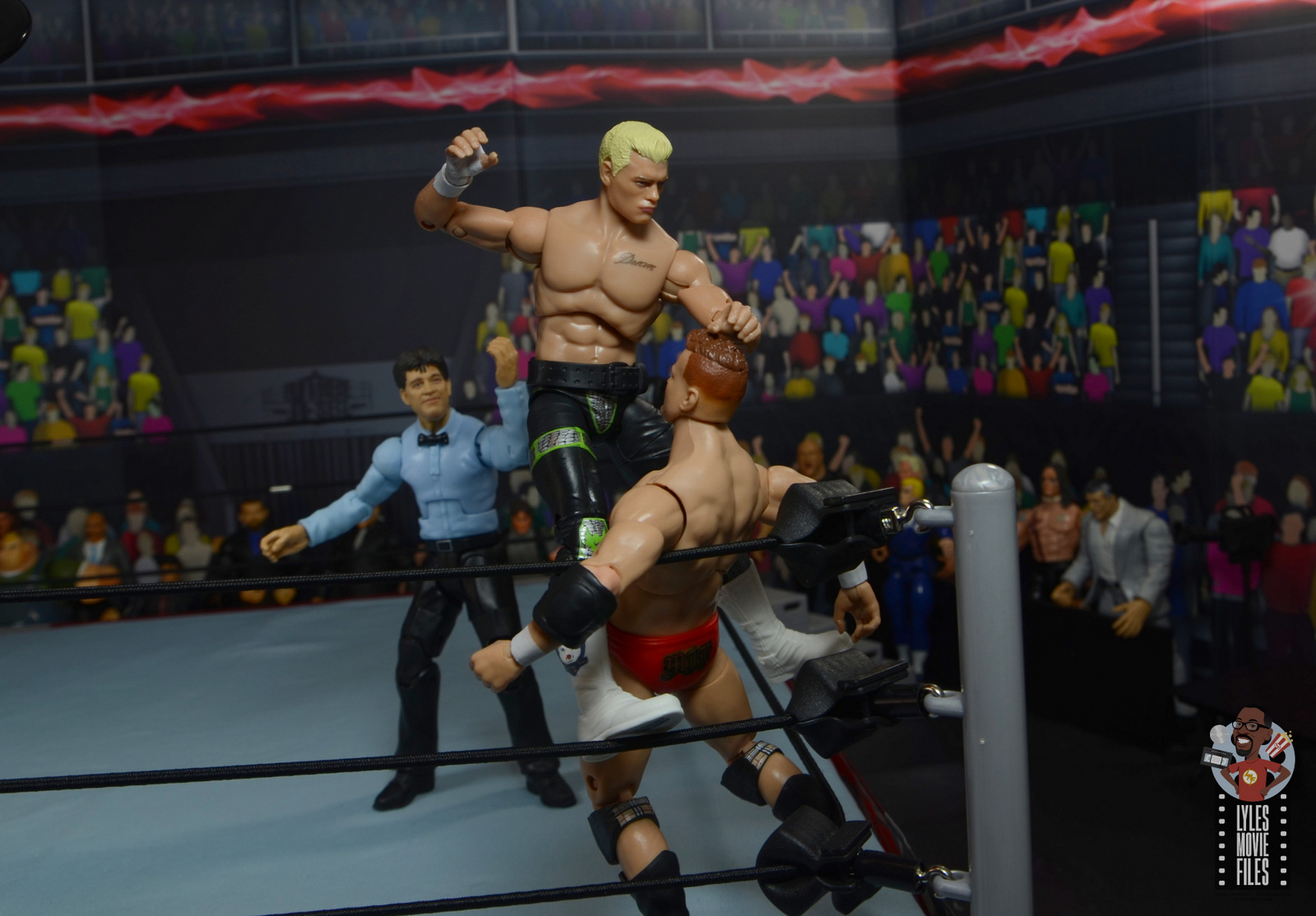 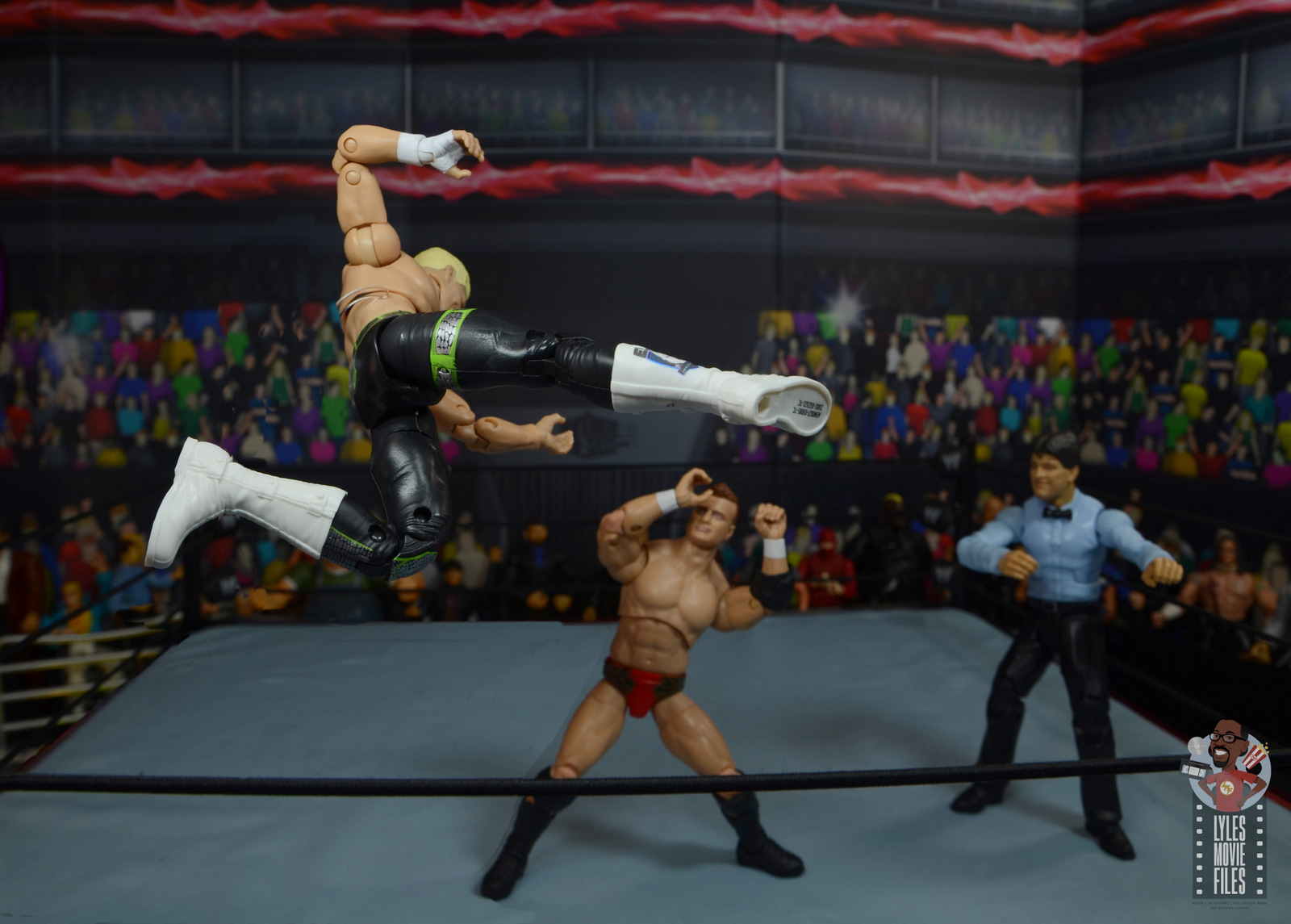 Accessories:  The Wave 1 Cody only came with a sledgehammer. That was a relatively weak accessory compared to some of the other figures in that wave let alone the line. WCT/Jazwares made good with Cody this time out. 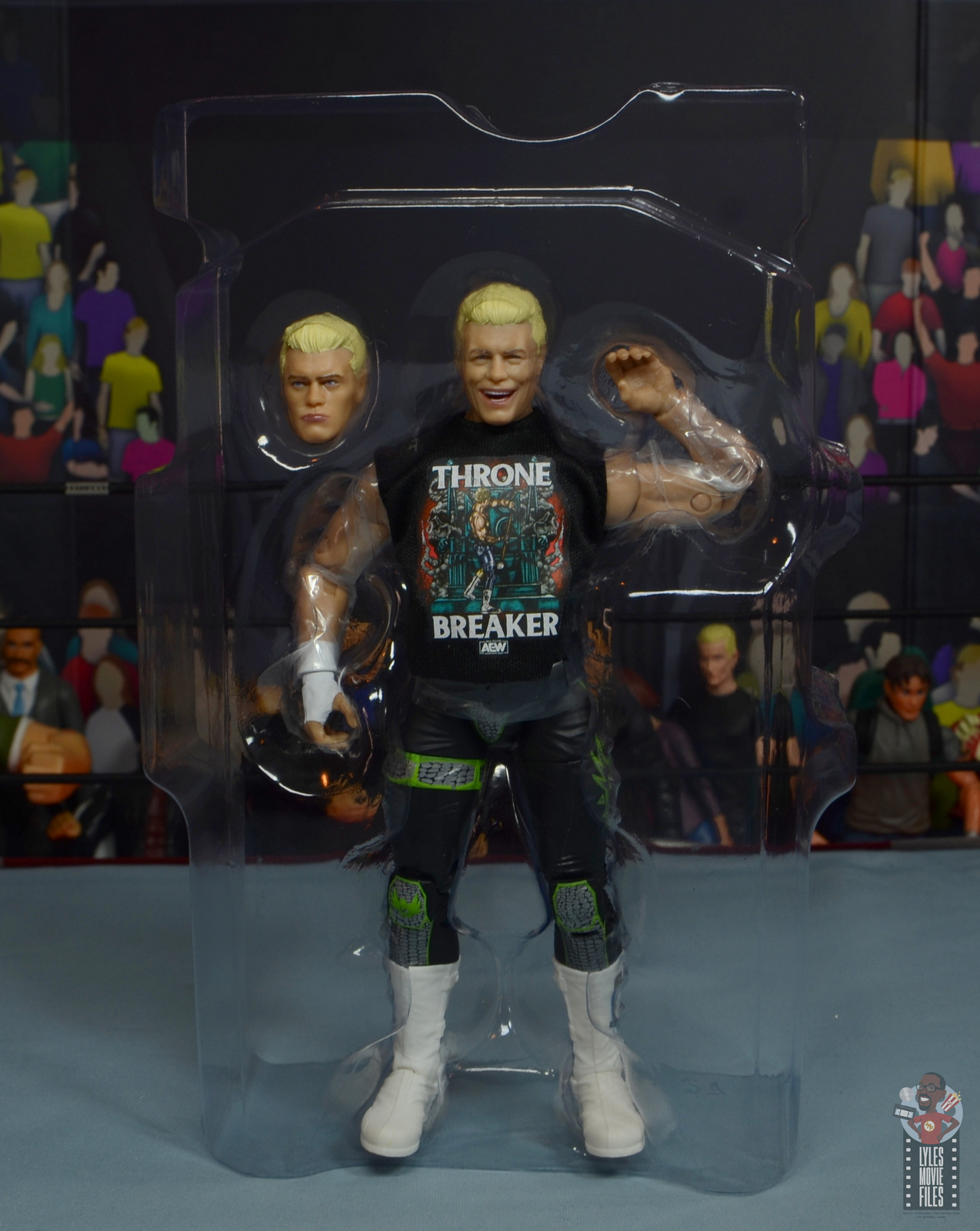 He comes with an alternate head sculpt — a retouched up version 1 head with a better paint job. I doubt this will match up with the first figure, but it’s an option if you wanted.

He also has his weight lifting belt. This is removable and can be used sorta (?) as a weapon although it coils up and doesn’t really flatten out as much as I’d like. 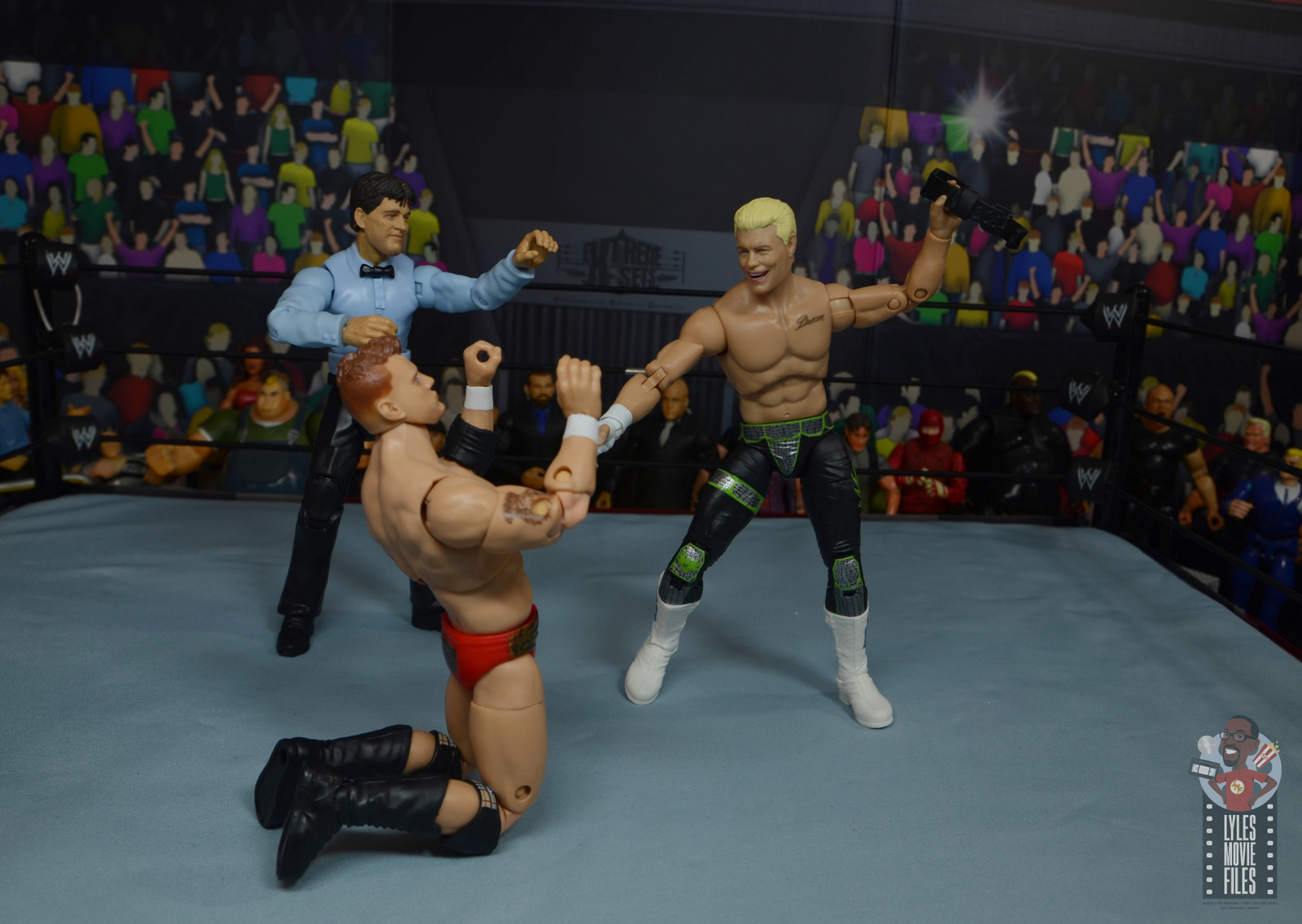 Additionally, Cody gets his Throne Breaker T-shirt. The tampo looks a little like custom T-shirts some higher end customizers provide. It’s nice to get this kind of design with an actual figure as this would typically be out of range and not cost out for Mattel.

I love that Jazwares included a plastic sleeve to prevent any bleeding of the dye onto the figure from the shirt in transit. 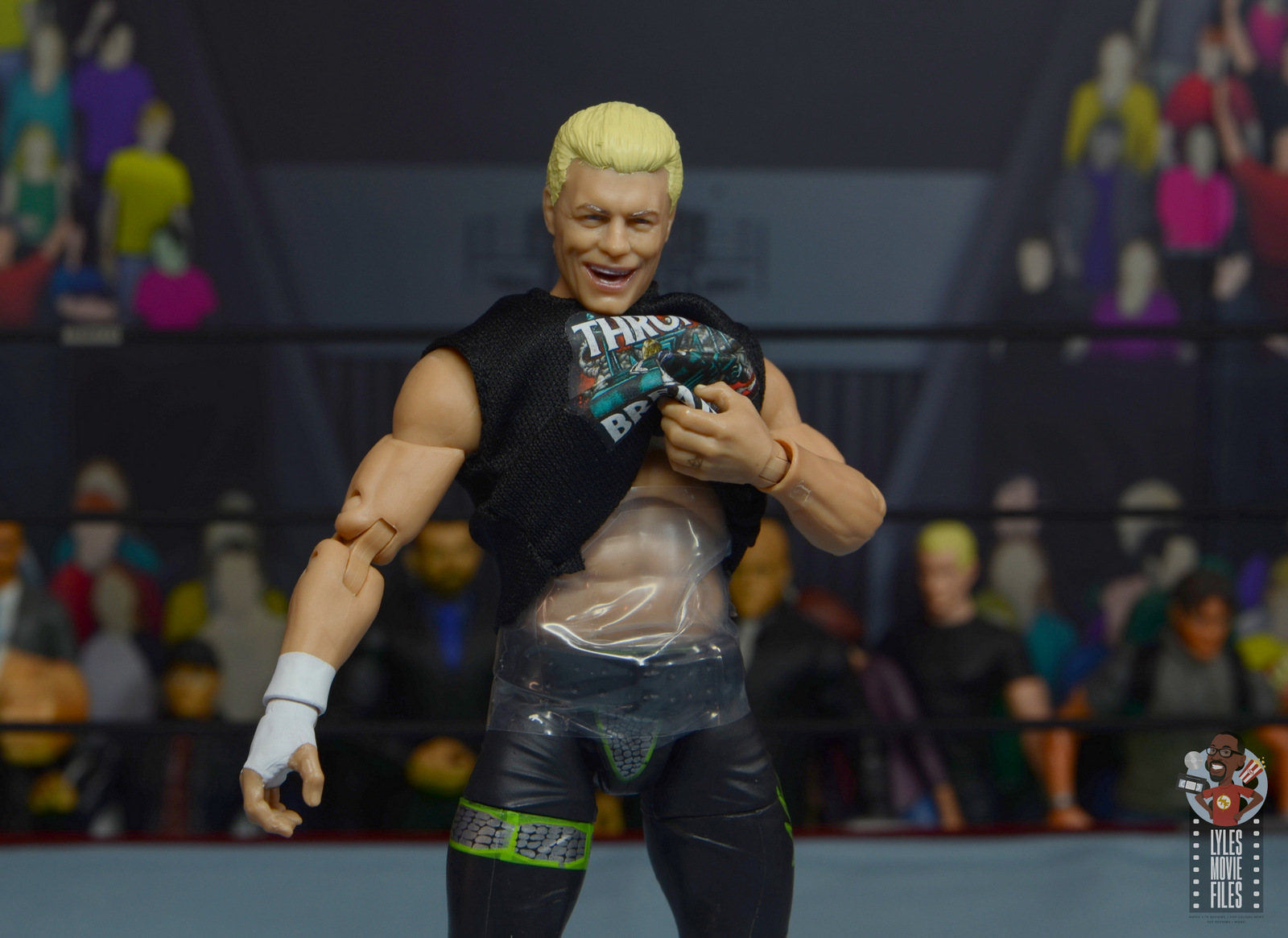 Worth it?  I got Cody for $20. With the extra head and cloth T-shirt that’s a better value than the original figure.

The first Cody figure was very solid, but this one is an improvement on every level and for now is about as good as it gets for an American Nightmare family.

Where to get it?  Since Target began selling the line I haven’t had to play Wal-Mart roulette. Target is doing a good job of keeping the waves in stock. I’ve seen stores restock at least three times so that’s an encouraging sign. GameStop is also getting in on the line too, which will only increase availability. 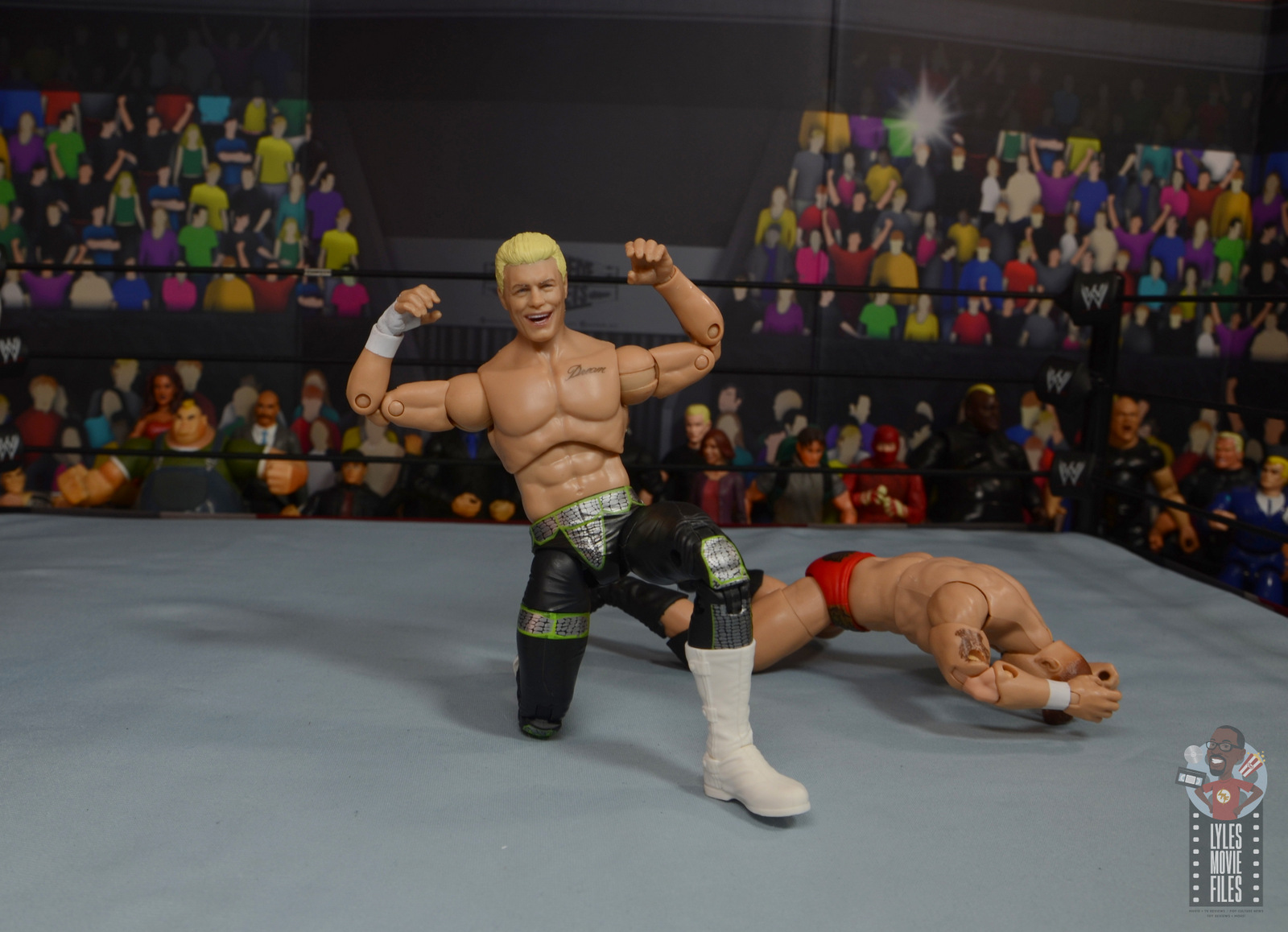