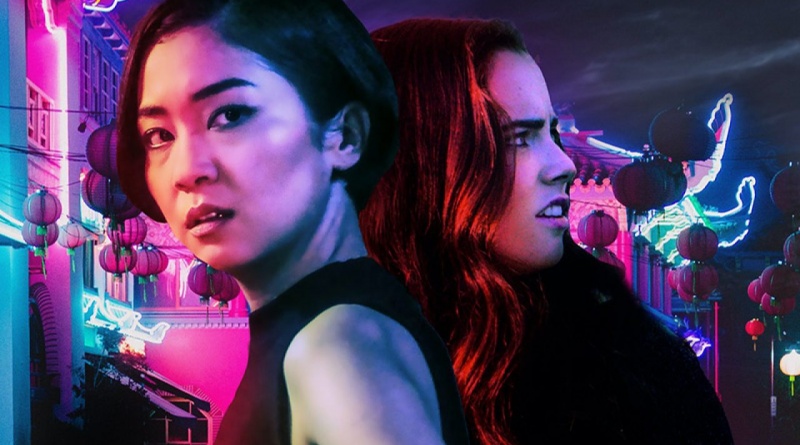 Bad Detectives is such an odd film. It plays out like an extended pilot episode of a TV series that I’d probably watch now that they clunky setup is out of the way.

That puts the film in a weird place as it feels like most of the potential is set to be realized after the end credits. Maybe the filmmakers just got overly optimistic about the chances for a sequel? As a film, Bad Detectives feels like it’d be a better series with less filler scenes and artistic fluff that’s hardly as captivating as the director intended.

Ping Liu (Dralla Aierken) and Nic O’Connell (Freya Tingley, Once Upon a Time) are former childhood friends reunited after their grandfathers die in a freak accident. Pic and Nic’s grandfathers ran a neighborhood detective agency where they helped clean up crime even if they never really made much money.

Initially annoyed at the notion of seeing each other again, Ping and Nic find themselves following in their grandfathers’ footsteps as a mystery unfolds relating to their deaths. Was it actually an accident or did their grandfathers get caught in something far more sinister?

Along the way, Ping and Nic encounter a helpful political aide (Steven Chan), some very shifty police detectives, a cagey art dealer (Susan Priver) that might hold the key to cracking the case.

Aierken and Tingley take a bit to develop their chemistry and establish their characters. Screenwriter Chris Johnson is more at fault on the latter. Johnson focuses on Ping and Nic’s acrimony instead of developing them as characters early on.

This does little to make either particularly likable in the first act, but after enough interaction and slowly settling into the traditional buddy cop (detective) roles. Ping is the calm, steady presence while Nic is the hothead emotional force. Aierken and Tingley take to this dynamic well and it’s not hard to predict how enjoyable this pairing could be with more time together.

A lot of the issues with Bad Detectives stem from Director Presley Paras’ artistic choices. The opening sequence is disjointed with a weird look at Nic’s military past before an overly long scene with her arriving in town under someone’s watchful eye. Paras also experiments with some shaky cam perspectives and character POV shots that come off more distracting than visually interesting.

Paras doesn’t establish much drama even with potential gang members looking for something in Ping and Nic’s possession. There’s little sense of urgency from most characters and the pace is overall slowly paced.  This is the kind of movie you could watch while doing your laundry or sorting your mail without worrying about missing too much.

Johnson doesn’t craft an overly elaborate mystery either. Even giving the film basic attention will give most viewers enough insight into the guilty party. Again, a mystery that can get solved in about an hour works ideally for a TV series. A movie requires more layers and challenging obstacles.

One of the smarter aspects of the film is Ping and Nic don’t magically turn into savvy detectives overnight. They have some growing pains in uncovering clues and working together.

At 72 minutes, Bad Detectives definitely isn’t going to warrant many time checks. It’s never so slow or tedious that it becomes boring. Most scenes focus on the film’ strongest asset — the evolving bond of Ping and Nic.

There’s a decent twist at the end and a fun tease for future installments that really would be far better suited to an episodic format instead of a movie sequel.

You can buy Bad Detectives on Amazon.