Good on Paper is a really funny romcom right until the point the jokes stop and it becomes a different movie entirely.

Iliza Shlesinger wrote this semi-autobiographically script based on her own experience of dating a good guy who turns out to be anything but.

Andrea (Shlesinger, Spenser Confidential) is a standup comic waiting on her breakthrough moment for years. She’s had steady comedic work yet desires to reach true star status as an actress complete with a Hollywood billboard like her sorta rival Serrena (Rebecca Rittenhouse, Once Upon a Time…In Hollywood).

At least Andrea can find solace hanging out with her bar owner bestie, Margot (Margaret Cho, Friendsgiving). While returning from another failed audition, Andrea has a meet cute with Dennis (Ryan Hansen, Veronica Mars), a hedge fund manager and Yale graduate. 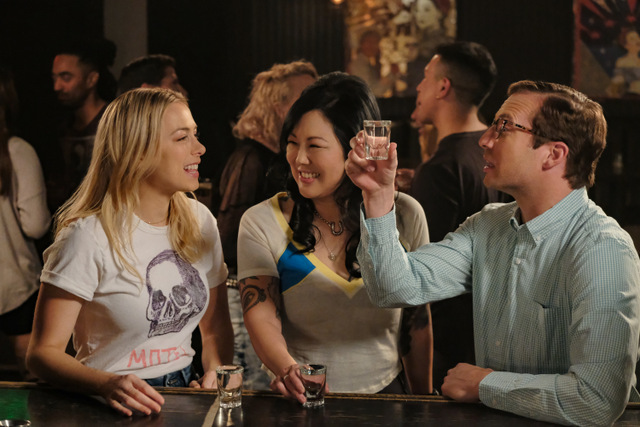 Dennis is hardly Andrea’s type and the two initially just have a platonic relationship. It’s clear Dennis wants more than a friendship while Andrea is happy to have another good friend.

Hansen plays Dennis with a clear mysterious edge whether it’s with a quick darting of his eyes or exaggerated slumping of his shoulders when Andrea mentions another guy. If this were a Lifetime movie, Dennis’ demeanor would be sounding off all the alarms before the third commercial break.

While the bottom is clearly drop at some point, the film has such a good time getting there. Director Kimmy Gatewood (GLOW) does a fantastic job of keeping the mood light and giving ample focus on other non-romantic aspects of Andrea’s life. With this less conventional take out of the way, I’d be down to see what Gatewood and Shlesinger could do on a standard romcom.

Andrea’s perceived rivalry with Serrena provides plenty of strong and funny scenes. And basically every scene with Margaret and Andrea is a winner. Cho so easily fits into the romcom quirky BFF role that she comes off like the template directors use as the ideal example.

Shlesinger has terrific comedic timing knowing exactly when to be more animated or subtly dial it down and say more with a casual expression. Shlesinger seems on the verge of her own mega breakout role that could come with any role at this point.  She gives an impressively well-rounded and layered performance that feels a little wasted by the final act.

This is the point where the film shifts from a comedy to an ineffective dramedy. In a traditional romcom, there’s the initial setup, the eventual couple connection with the accompanying honeymoon phase, a fallout that seems like it could doom everything and the overly romantic reconciliation. That high-low-high roller coaster of emotions is what romcom fans expect.

Good on Paper takes a different path going for a high-high-low rollout. It’s like enjoying a standup where the comedian is putting you in a great mood, doubled over with laughter only to wrap their set with an extended monologue on the homeless rate. It’s not unfunny, it’s a major buzzkill.

In this case it’s the fragility of the male ego and how women shouldn’t be guilted into settling. Perhaps there’s a better takeaway, but the film doesn’t really present a strong argument for Andrea.

Establishing her poor relationship choices earlier could have established some foundation for why Dennis was so appealing. Her casual flings don’t suggest she’s struggling to meet guys and there’s not enough follow-up to show those guys were nothing happening losers.

The final act also plays out weirdly with Andrea taking the payback plan to this weird revenge plot that stops her from being the sympathetic victim to the aggressor. It’s a shift that doesn’t work with the flow of the film at all and feels like it belongs to a different movie entirely.

Good on Paper comes so close from leaving ’em laughing and wanting more. The ill-advised final act makes it like a messy breakup where the bad ending is the unfortunate lasting impression.

Check out Iliza Shlesinger’s latest standup Over and Over now on Amazon Prime.