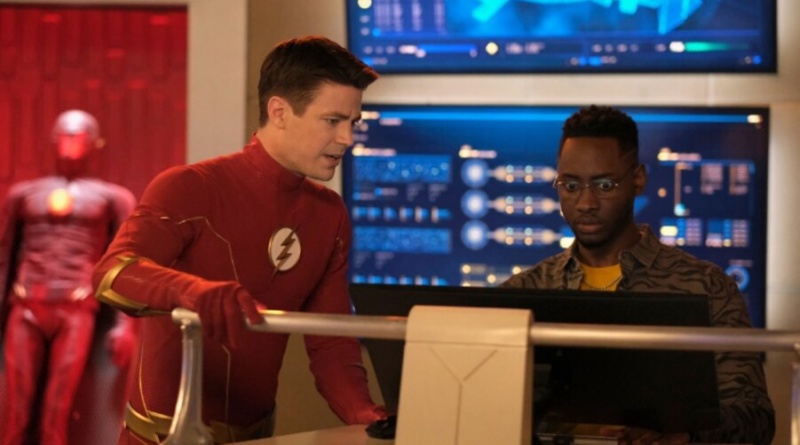 Godspeed was one of the cooler Flash villains created over the last decade. For whatever reason, The Flash writers have decided that the fascinating take from the comic just wasn’t good enough. Naturally The Flash had to CW it up so the the show version of Godspeed is gosh-awful and an epic fumbling of what should have been a layup villain.

Enemy at the Gates brings Godspeed back once again to waste and ruin in a whole new exciting manner with its take on Attack of the Clones. No, wait the show decides to go with Civil War. It’d be nice for the DC show to reference DC events instead of every other property.

Nora pops up, but it was all a dream (cue Biggie Smalls) — he tells Iris “We’re pregnant.” For all the fanboys that absolutely lost it when Iris said “We’re The Flash,” this is an actual real life application of that statement. Where the heck is Iris? I’m very disappointed with the lack of Candace Patton on The Flash these days.

This leads to Barry on covert Flash mode acting increasingly goofy to keep this non-confirmed pregnancy a secret. And this being The Flash, this results in some wacky hijinks with mind-reader Cecile and Chester.

Two Godspeeds arrive, but they sound like dinosaurs. I really wish the show just went with the basic origin Joshua Williamson created, which would have made Godspeed a far more interesting character. It’s weird how the writers waste the good villains and spend way too much time on the lamer ones. Having Godspeed using an alien voice is silly.

Now there’s multiple Godspeeds running around. Unless they’re fighting Separatists and the Droid Army, clones are just more of a bad idea. I love the suggestion of having Iris rally Team Citizen. Now that Kamilla is gone, Team Citizen is just Iris and Allegra.

Allegra’s already preoccupied this episode as she’s in the medical bay offering support to Caitlin as she’s trying to repair the damage to Ultraviolet done by Black Hole. With Barry fighting an army of Godspeeds this would be a good time to bring Allegra out to the field especially now that’s tapped into her nifty new power. I don’t understand when the writers consider it a good time to deploy the other metas. And where was super ninja Sue this week?

Cecile can share her emotions now, which she used to give Ultraviolet hope that Team Flash will save the day. Ultraviolet’s recovery seemed like a weirdly thrown in subplot for this episode.

This is probably a good time to mention I hate everything associated with this goofy Frost/Chillbaine romantic subplot. This is the opposite of romantic and isn’t even sweet by the low bar of The CW shows. It’s lame and it’s even worse when both Frost and Caitlin are in scenes with him. Also, why does everyone get to get a hall pass to STAR Labs? Is there even a point to having locks on this place?

At this point doesn’t everyone in Central City have a key card to access the lab anyway? Chillbaine wants to help, but Frost is reluctant to trust him. Is it weird that there’s a former killer in STAR Labs and Barry has no idea he’s there? At least Frost and Chillbaine don’t magically level up to be at Godspeed’s level and get beat by a pair of clones.

Why does seemingly every episode of The Flash now feature some segment that has me embarrassed to watch it? This week it was Chester throwing down some funky tunes to disorient the Godspeeds via Gideon. I’m convinced now the writers are trolling us with new ways to make Chester the corniest cornball in the CW Verse.

While The Flash ultimately fails at stopping them with the audio enhancement, another squad of Godspeed clones — the 501st? — arrive and battle the original clones. This is isn’t confusing at all. Barry’s now convinced it’s a civil war between the Godspeed clones. My only question is which group is Team Cap and which one is Team Iron Man?

One positive for this episode is at least we got to see The Flash as The Flash for the majority of this episode, which never seems to happen these days.

The pregnancy test is negative so all of Barry’s secrecy was for nothing. Much like all of that wasted screen time for Chillbaine and Frost. I don’t even wish I cared why he left after selling that he’s so into her. 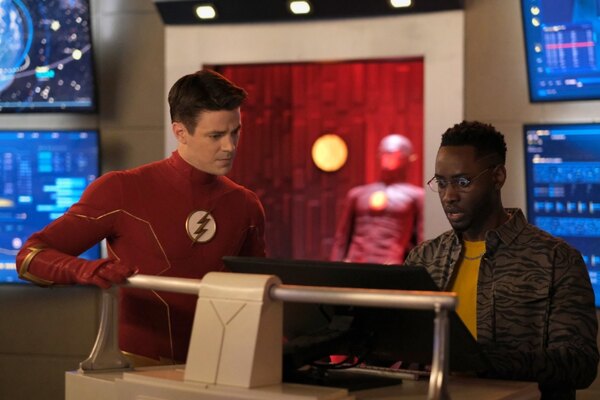 Kramer and Joe working on cracking the Adam case. So we learn Kramer has meta powers tonight? Nope, the plot advancement comes in the post credit scene with presumably Adam blasting Joe’s car while they’re on a stake out. Does the CCPD cover the costs of Joe’s car in this case?

I feel like I say this every week, but The Flash desperately needs some focus. This stew of subplots with no actual direction isn’t working. Maybe if the show’s credible villains were onscreen instead of the writers this season would have some hope of building momentum? As it stands this is another running in place going nowhere installment.