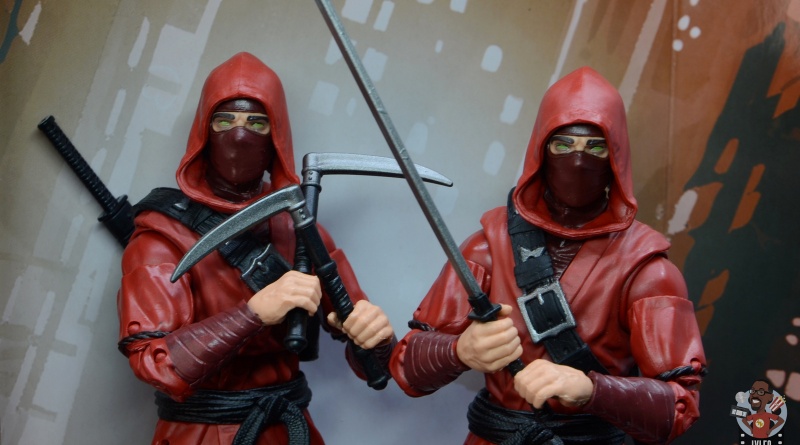 The Hand Ninja knocks out another important army builder from the Marvel Universe in Marvel Legends. While rarely portrayed as even remotely competent despite being…ninjas, the Hand Ninja is more of a formidable opponent due to their numbers.

I wanted to wait until I had at least three ninjas, but it was becoming a longer and more expensive wait. It’s an ideal situation for collectors who get giddy with the thought of 20-30 ninjas overwhelming Daredevil, Elektra and Wolverine. Let’s see if this figure is worth mass assembling.

Packaging:  I think I’m getting pretty good at recognizing the package artists now and this looks like the quality work from John Tyler Christopher. The only “issue” with this one is it just features one ninja instead of a platoon. 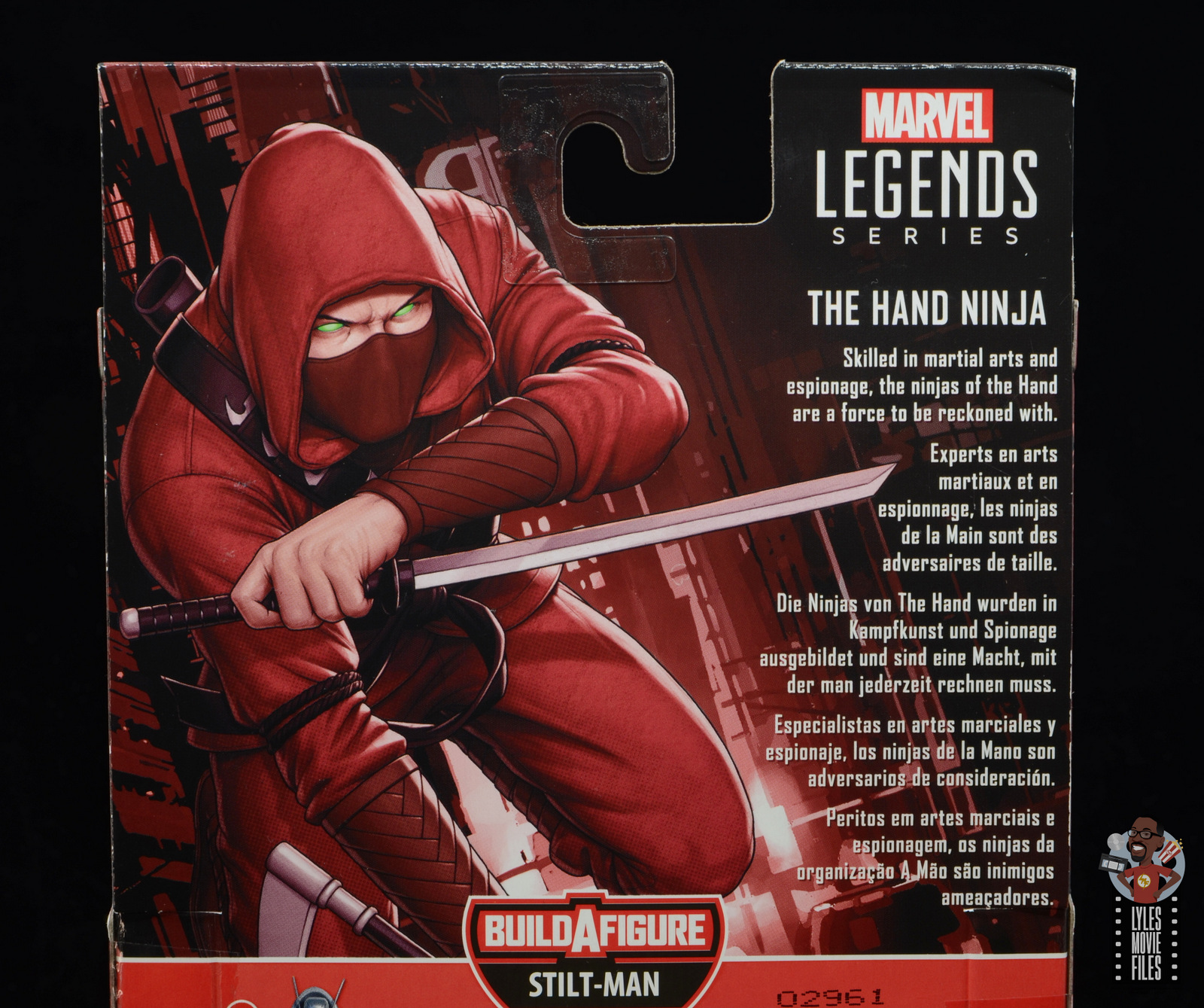 The bio offers a nice summation of the ninja and their skills.

Likeness: The good thing about the Hand Ninja is the outfit isn’t so clearly defined that there’s a definitive look so the Hasbro team just needed to come up with a vaguely ninja-appropriate attire. 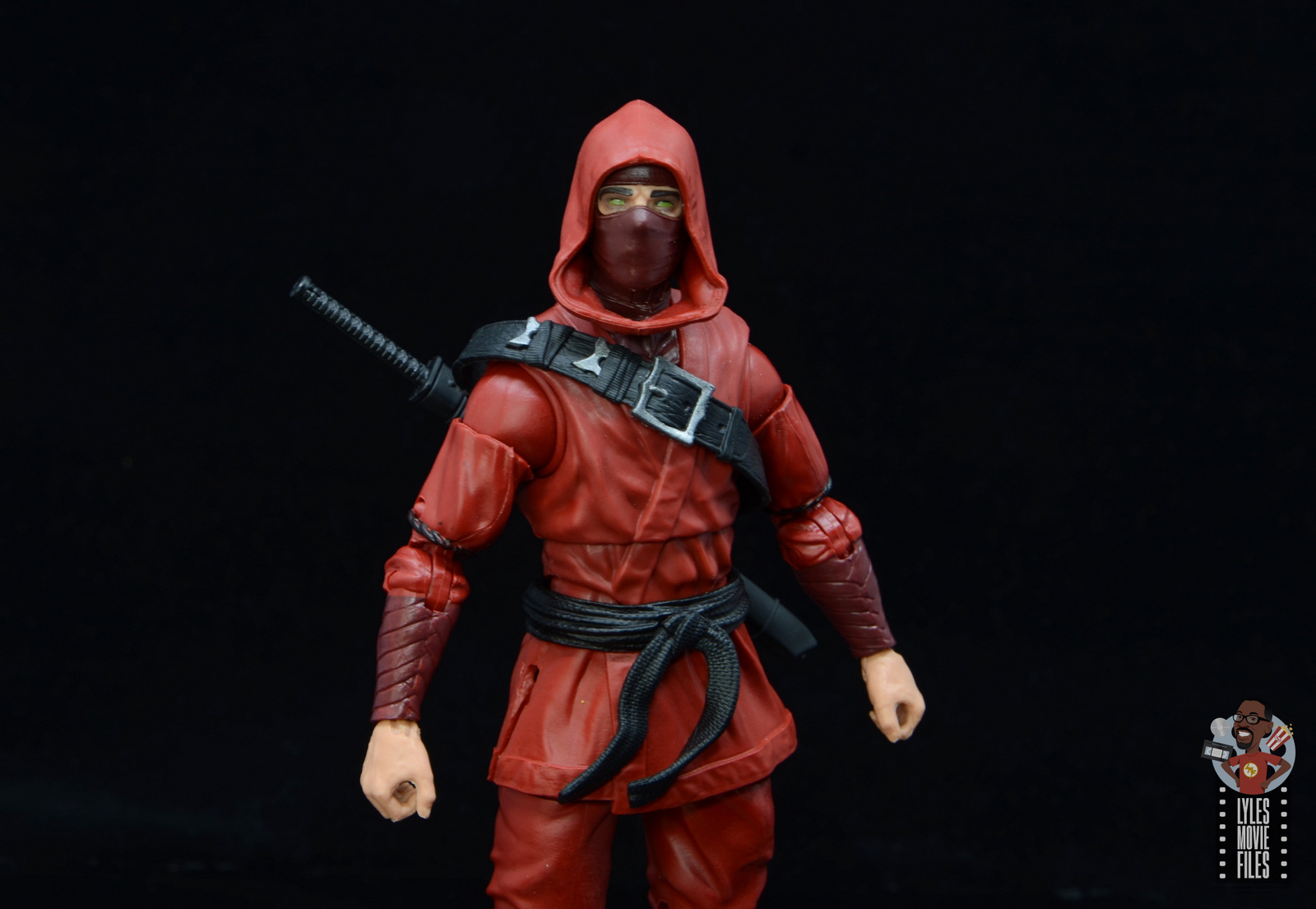 And that’s what this figure provides — a basic ninja figure. Hasbro previously released a Hang Ninja as a repaint of the Ronin figure.

Honestly that figure wasn’t terrible and I like the head sculpt/hood set up of that figure better as the hood didn’t flare out so wide at the bottom as this updated version. I do like the dead look in the eyes, which conveys a sense of blind obedience. 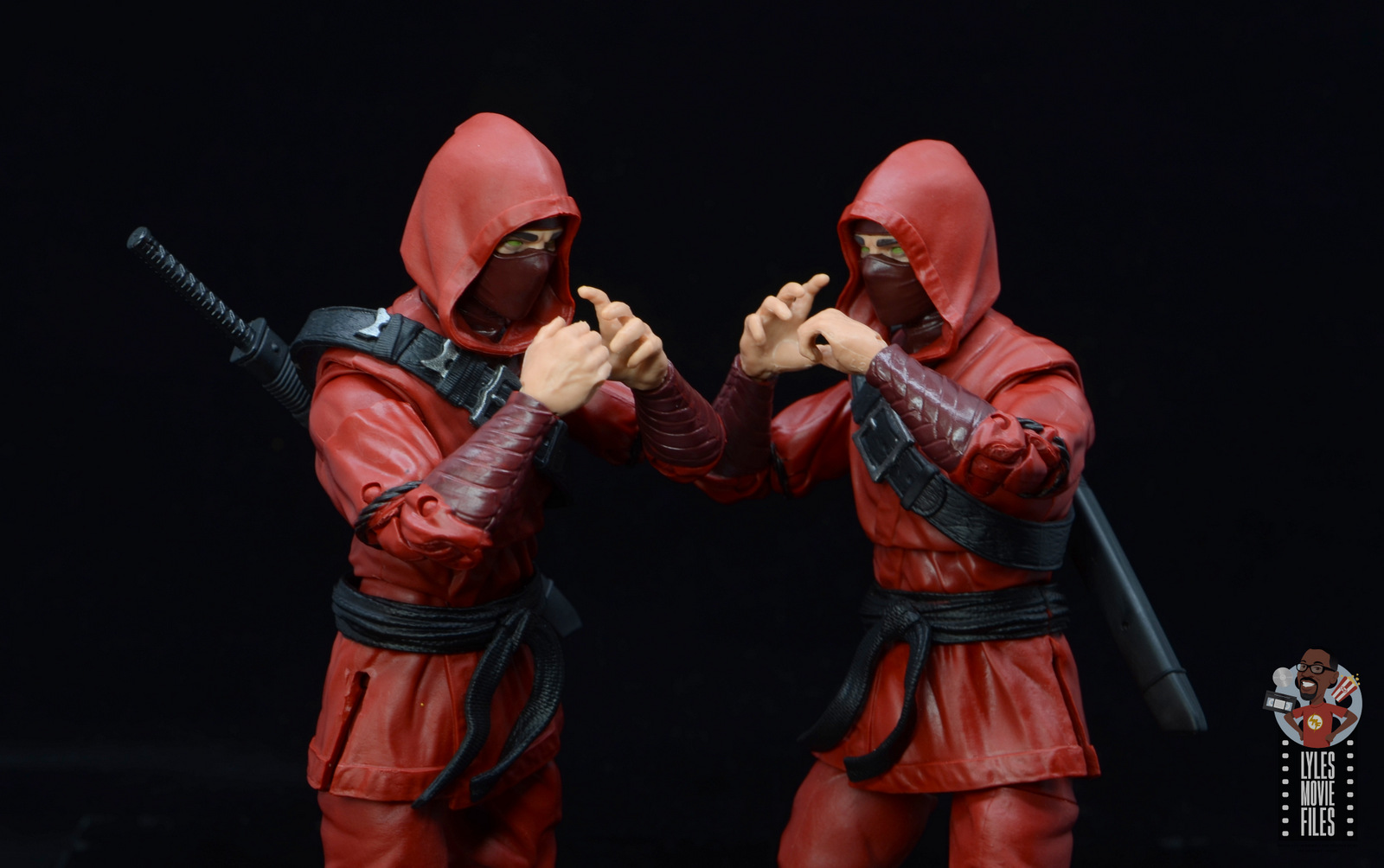 Beyond the head sculpt, the figure is an improvement thanks to a new dedicated sculpt that features a slender body rocking a loose and baggy gi. The wrinkles and folds show the looseness of the attire without it looking two sizes too big. I really like the gauntlets and wraps around the shins and ankles.

The strap with shuriken and big buckle are well done and scaled properly.

Paint:  The Hand go with the most sinister red possible and Hasbro goes with a nice mix of dark red for the main attire and a brick red for the face mask, gauntlet and wraps.

Detail work like the silver of the shuriken and buckle are precise while the black armbands are also done nicely.

Scale:  Whoops. While I’m fine with grunts like the Hellfire Club Guard, AIM and Hydra soldiers being taller than the average character, I’m definitely not loving that the Hand Ninja is taller than Daredevil. 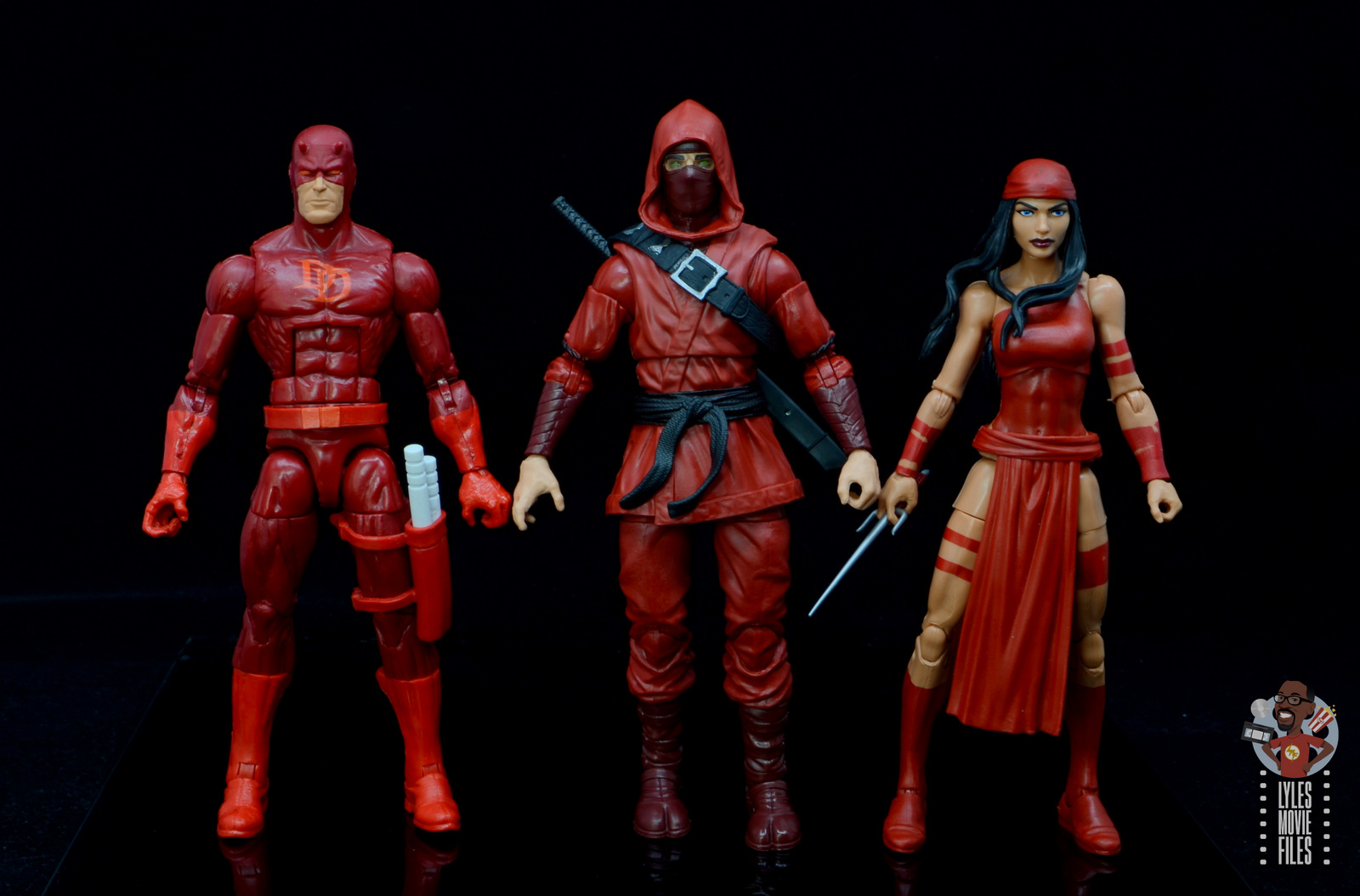 Some customizers have fixed that slightly by Dremeling the head piece so it rests lower and doesn’t sit as high on the neck peg. 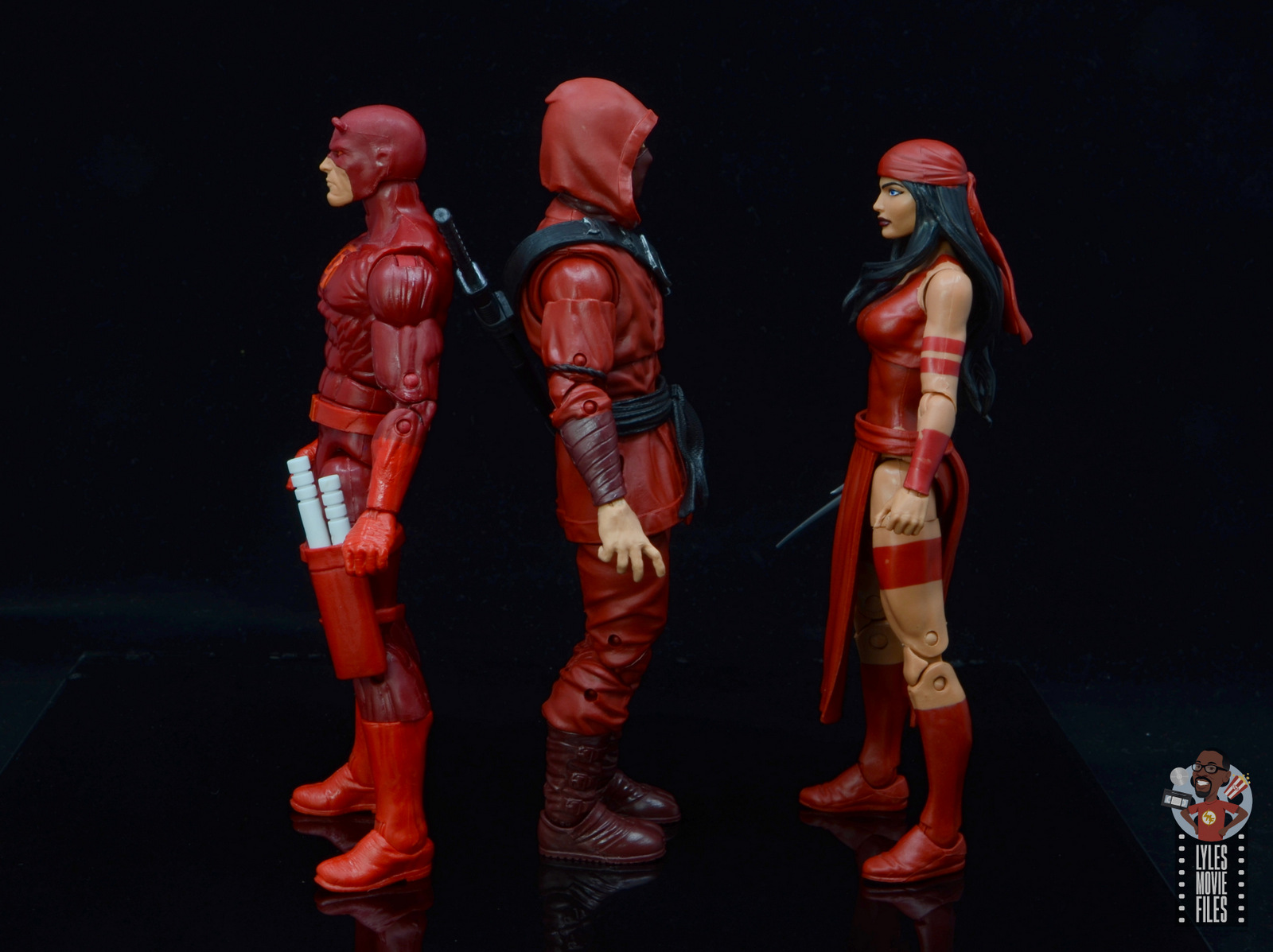 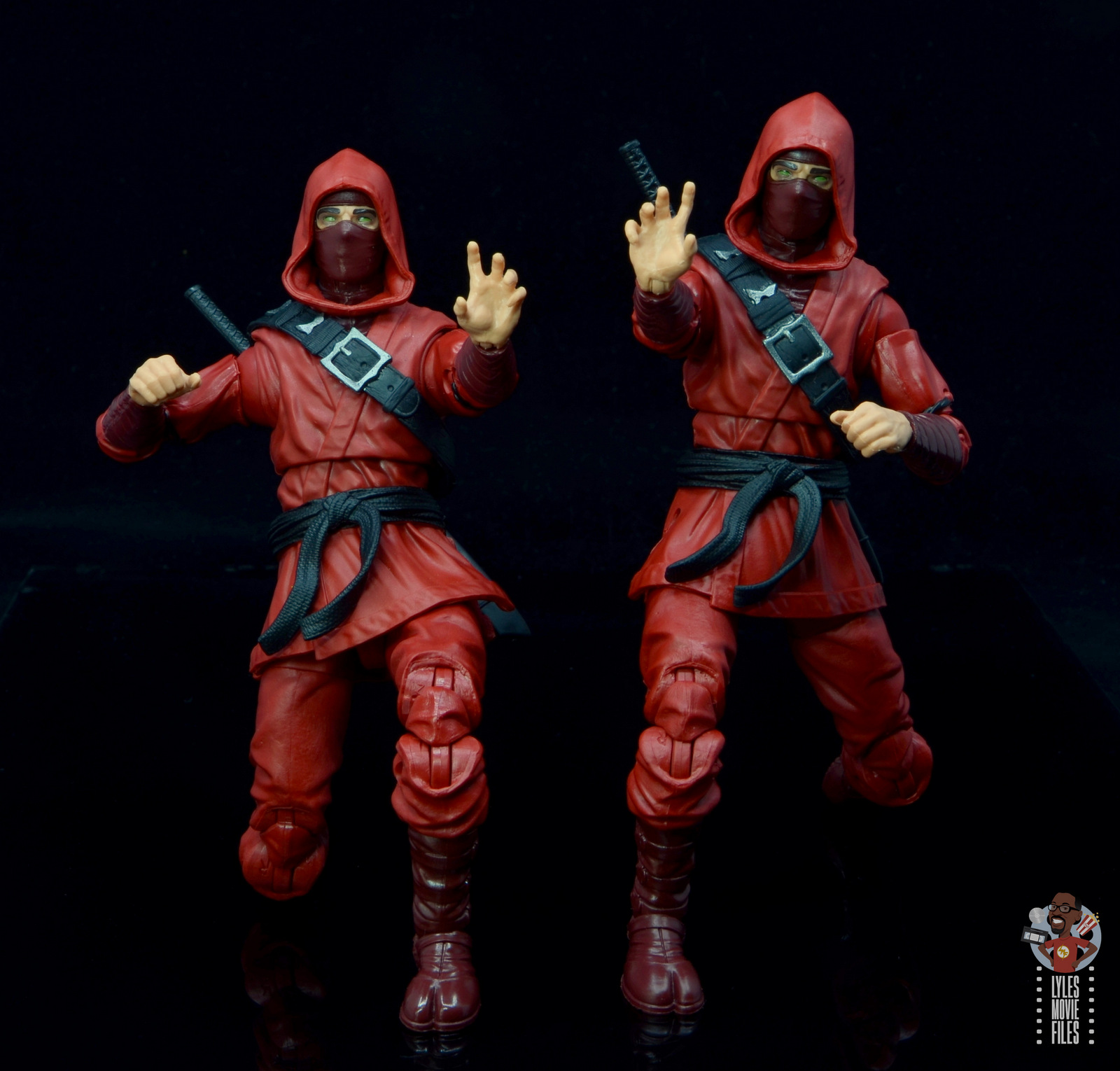 The articulation is a little stiff. The torso has some sort of tilt, but the material and thickness of the plastic tends to spring it back. 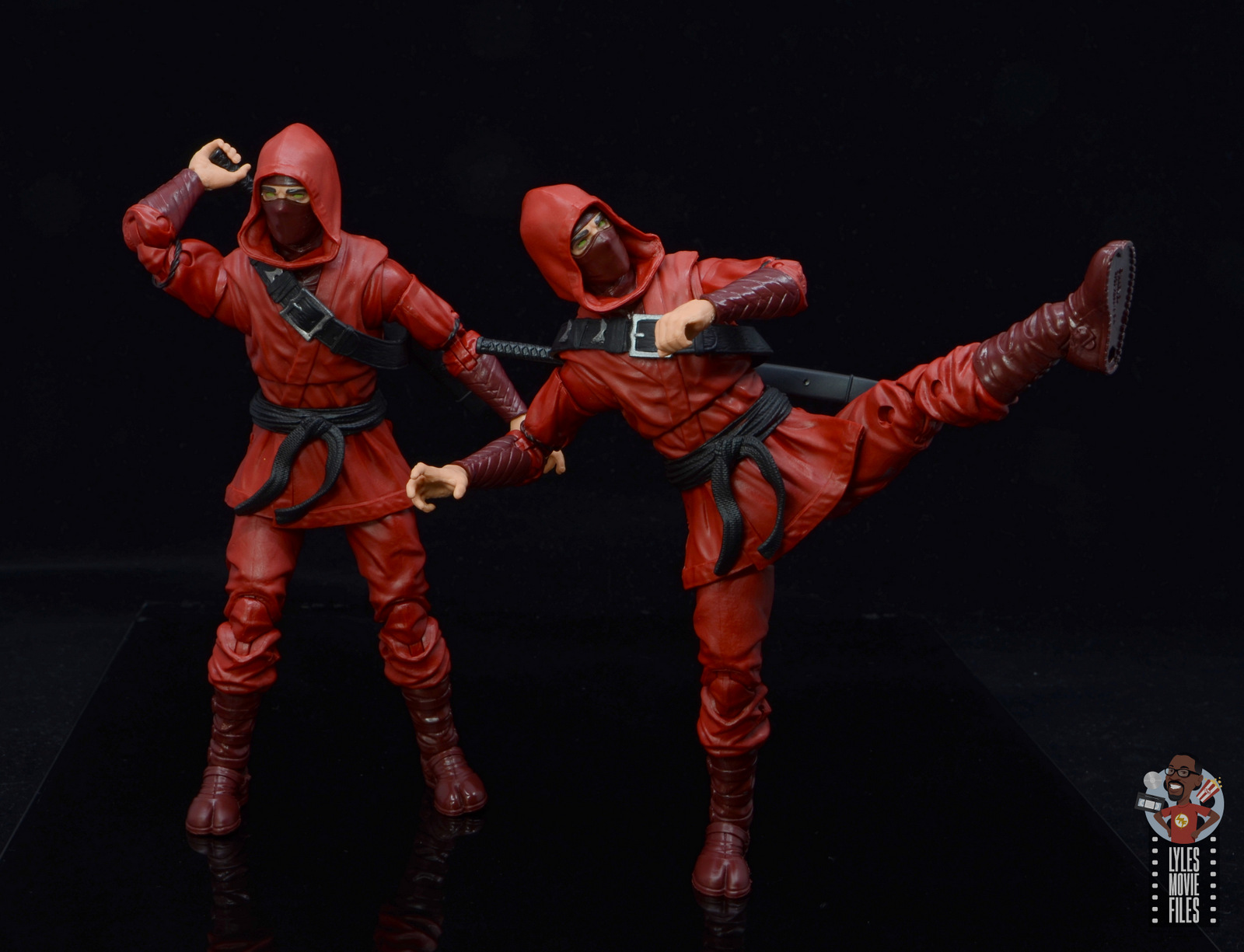 Both of mine had somewhat loose ankles so they couldn’t hold dynamic poses too long or in worse cases just stand properly. I did appreciate the butterfly shoulder articulation point as it made wielding the katana a breeze. 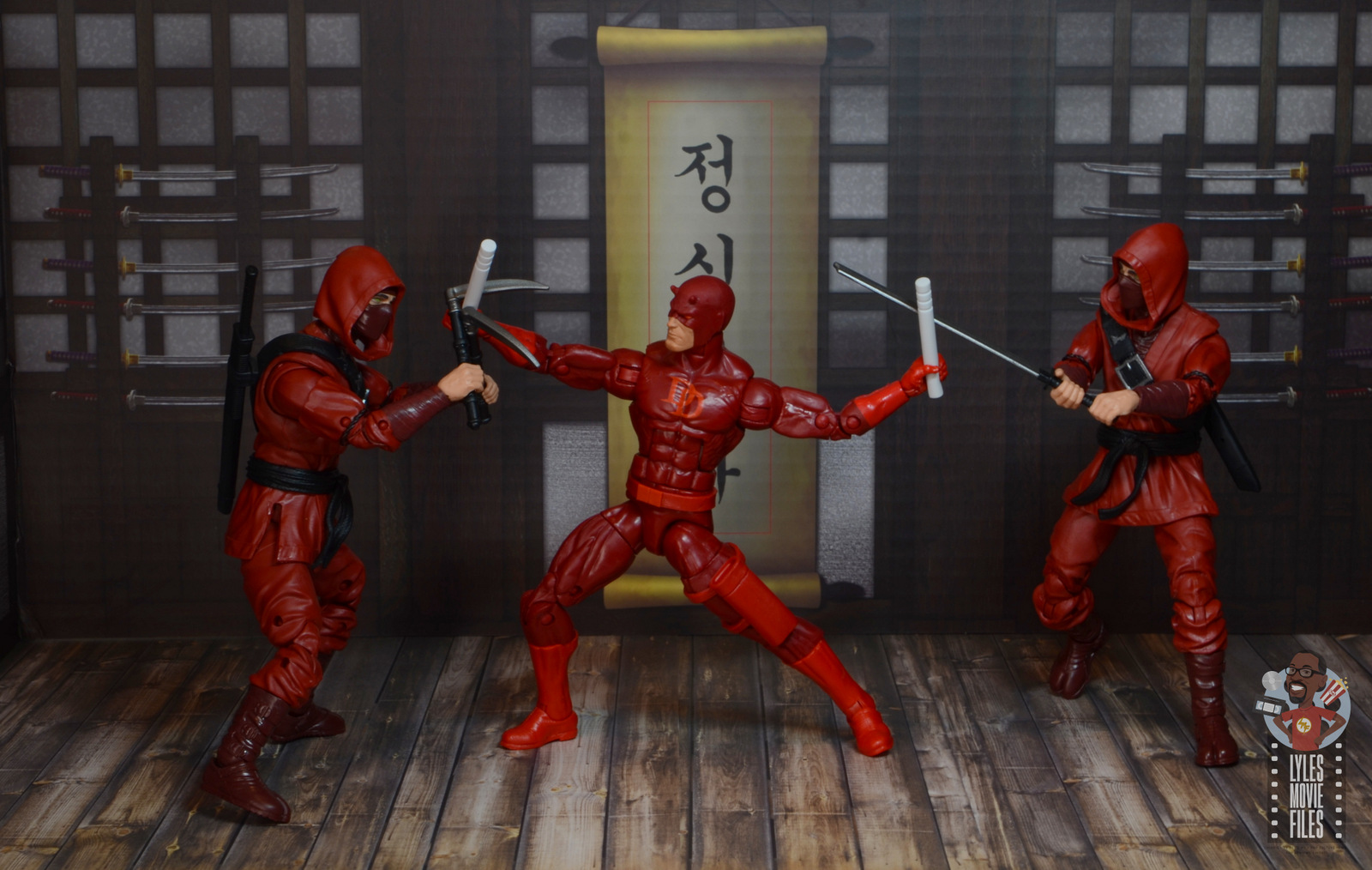 The Hand Ninja has: 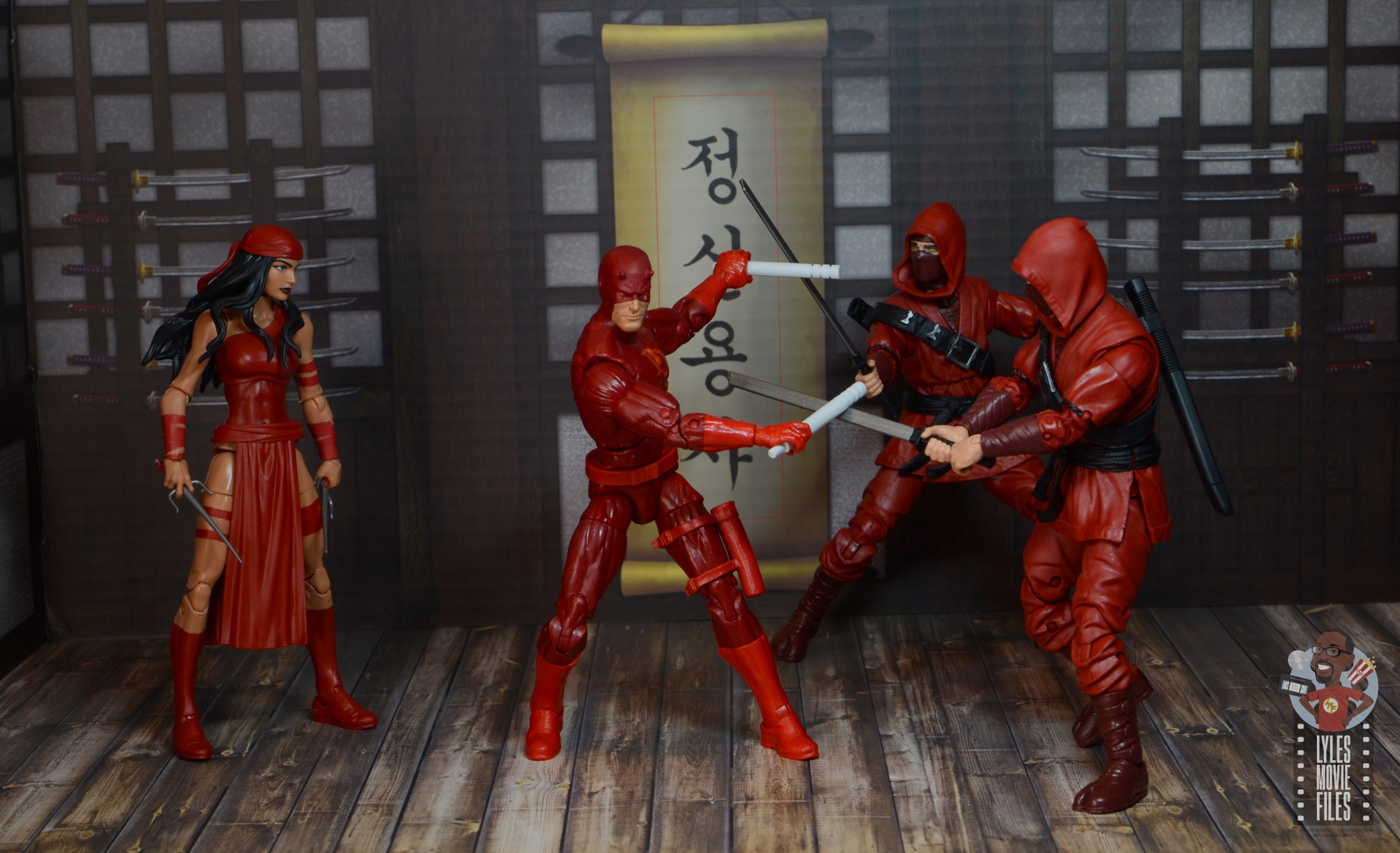 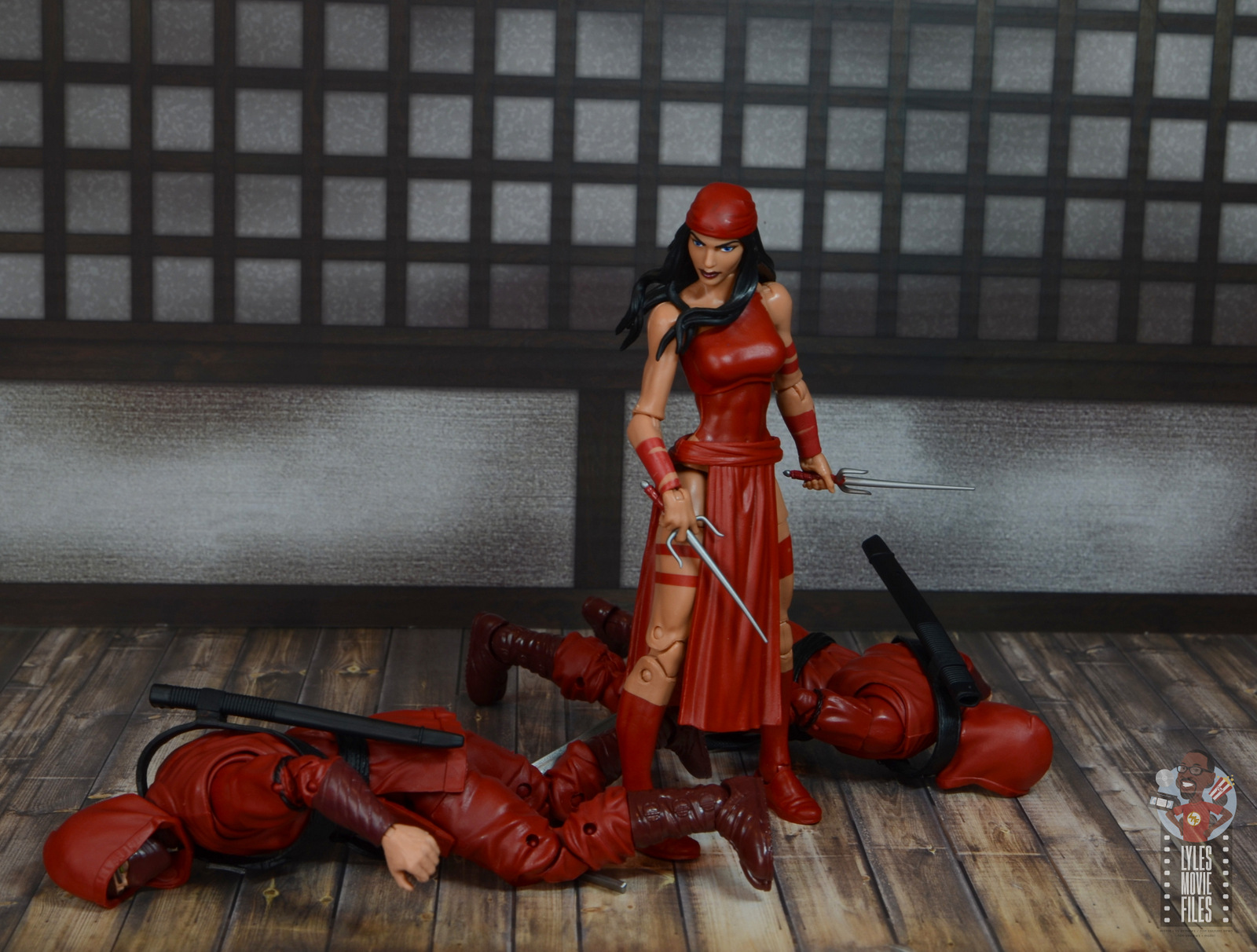 Accessories:  Hand Ninja is ready for warfare and has a nice assortment of weapons. 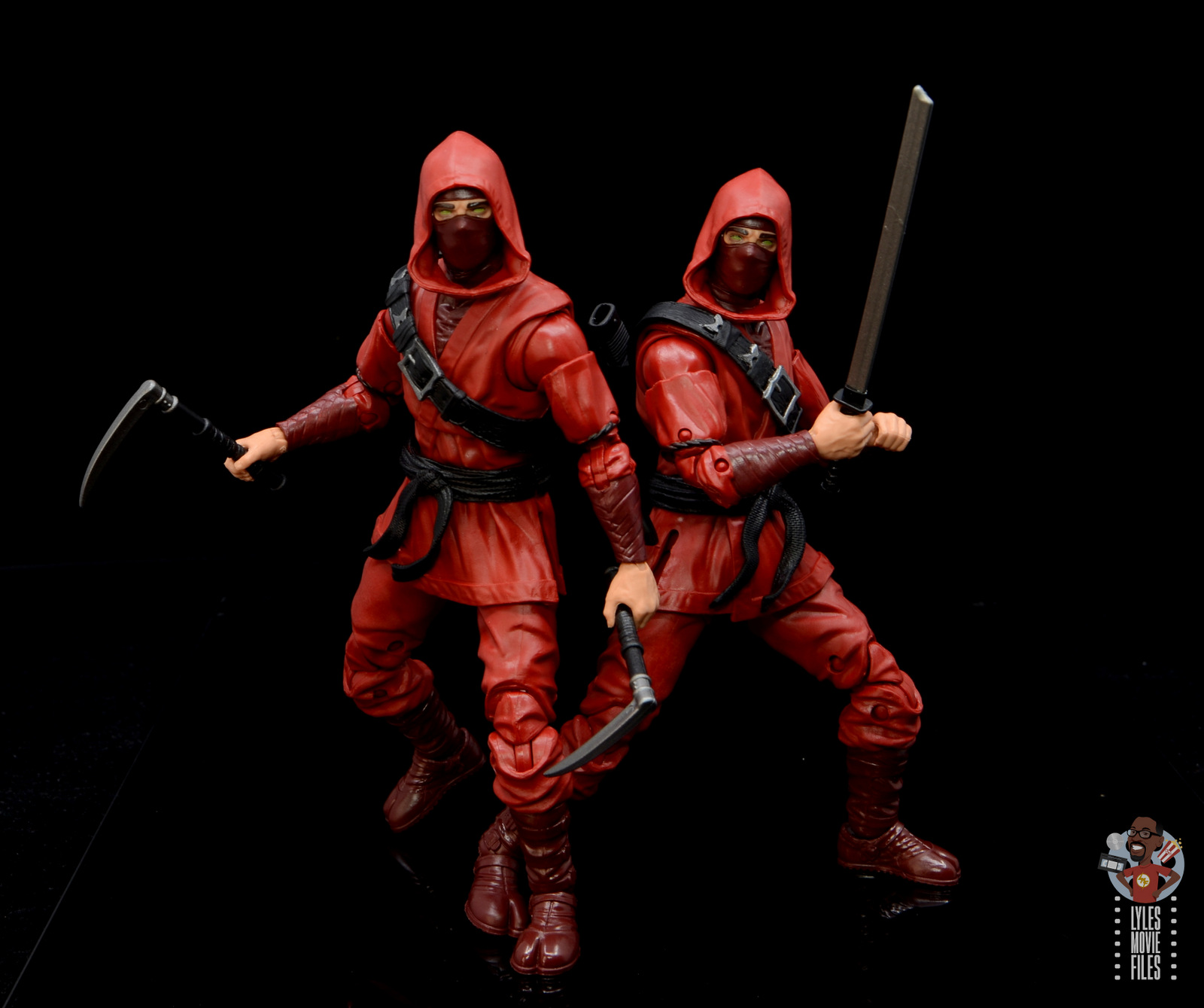 He’s got a katana that fits smoothly in the scabbard. He’s also got a pair of sickles. 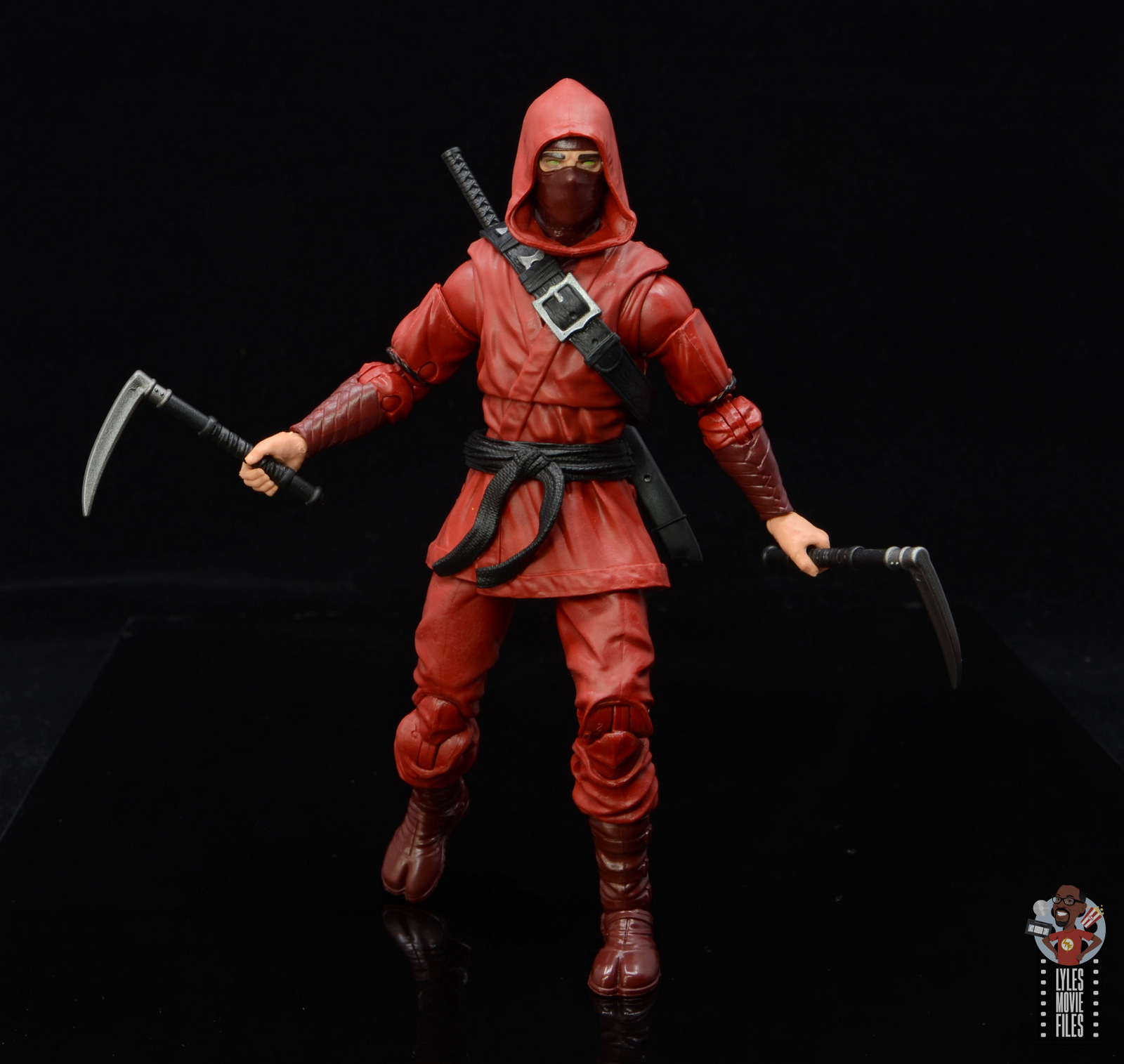 Also, he’s got a set of grasping hands, which will be useful for mixing up the display. 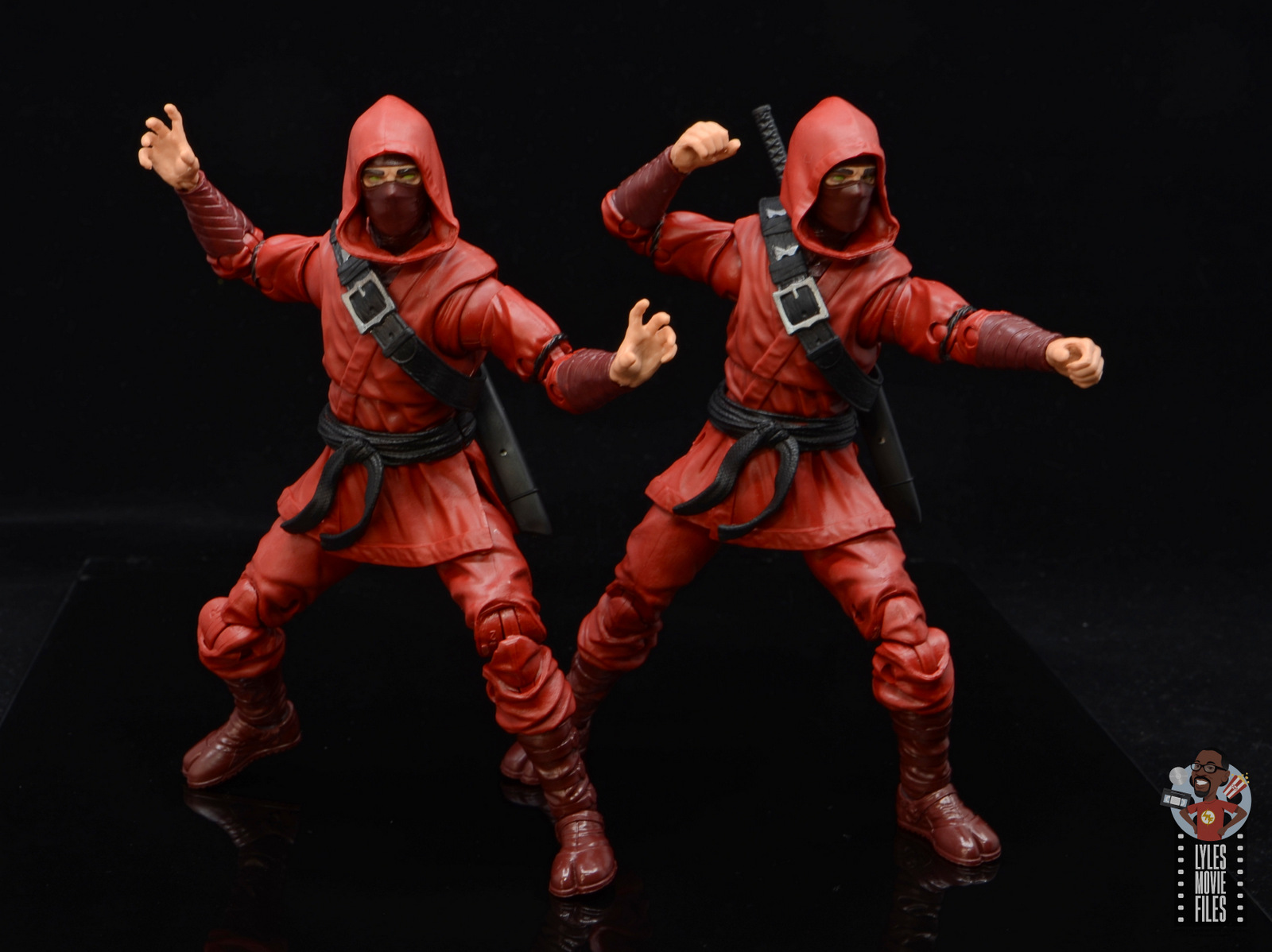 Finally, he’s got the most ingenious part for a Build-A-Figure with the leg extensions for Stilt Man. That allows for the BAF to be as high as you want in building your Hand Ninja army instead of having to try and offload them online.

Worth it?  I got Hand Ninja for $20. That’s a solid price given the accessories. I’m hoping at some point Hasbro releases them on Pulse at a slightly cheaper price without the BAF part so I can more affordably army build.

The Hand Ninja is too tall and the articulation isn’t as smooth as I’d like for this kind of character, but it’s a solid goon character that hopefully will be easier to army build over time. 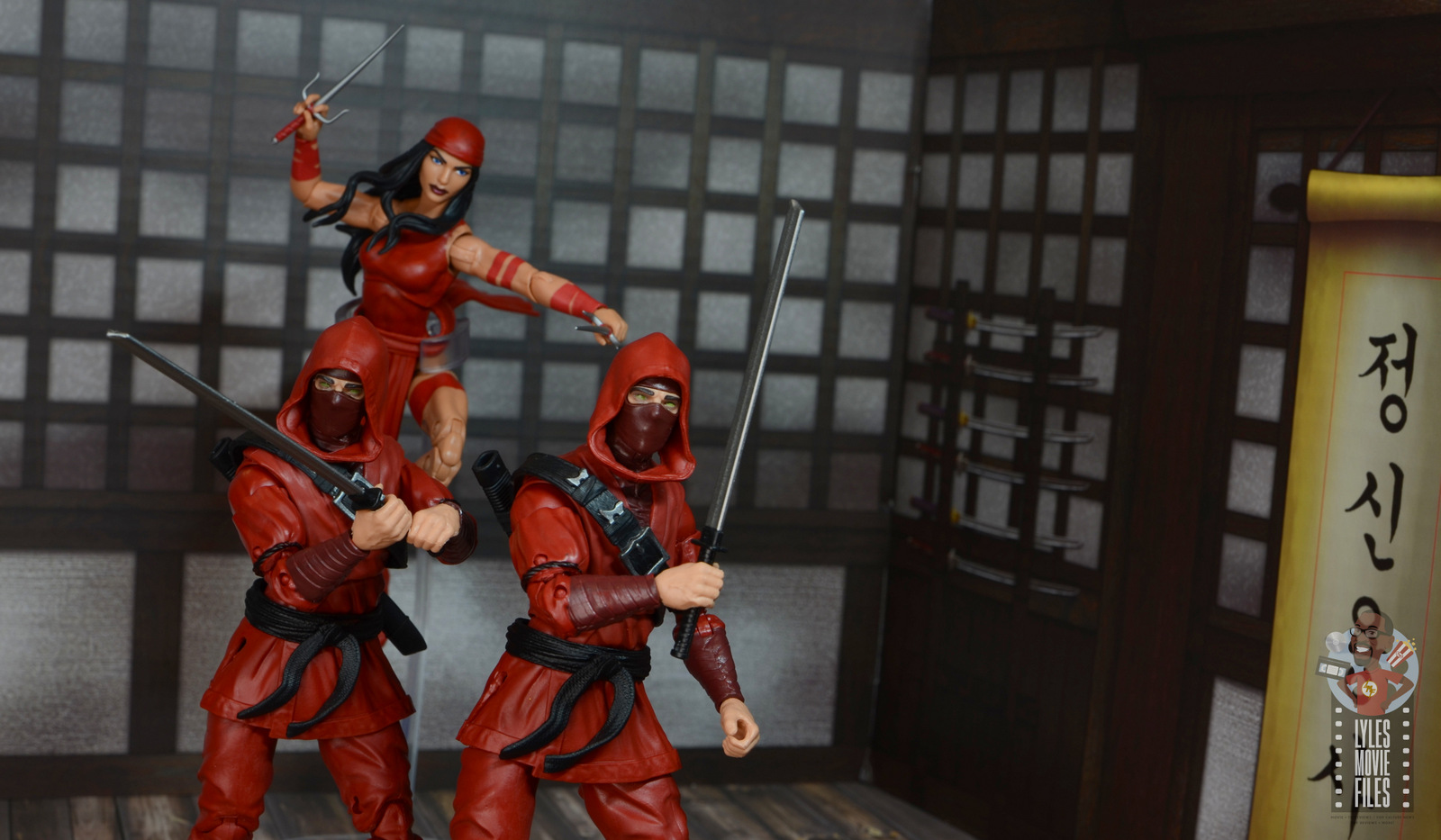 Where to get it?  Surprisingly for an army builder, I’ve seen the Hand Ninja at stores pretty regularly particularly Target and Gamestop. If you strike out there, check out Amazon or Entertainment Earth.