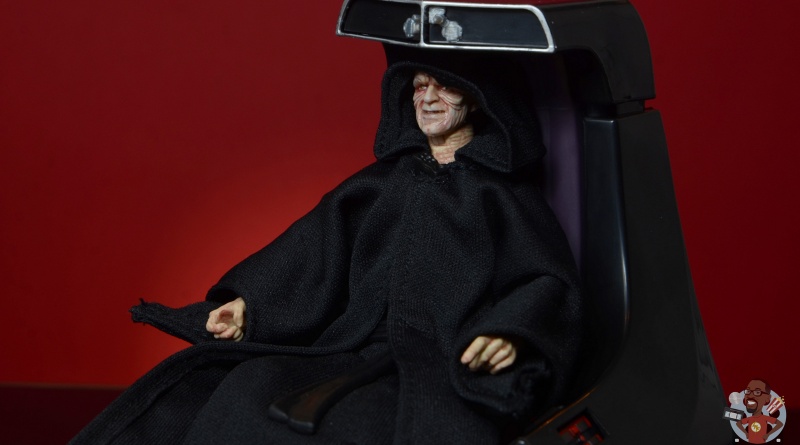 It’s wild that Darth Vader is my favorite villain, but he’s not even the best villain in Star Wars. That distinction is the sole property of Emperor Palpatine, the scheming wheeling and dealing Sith Lord that doesn’t mind letting a couple decades pass to get the W.

Hasbro released an underwhelming version of Palpatine relatively early in the Star Wars Black Series line and I wanted no parts of it. Eventually it was time for the Emperor to get an update and it quickly became one of the figures that got me away from SH Figuarts and back on Hasbro’s versions of these guys. Let’s see if this figure shocks me or I’m still underwhelmed.

Packaging: Palpatine was one of the last few figures to get the traditional Black Series packaging with the black and red accents with the grayscale portrait of the figure.

His box is deluxe sized to accommodate the throne. The bio is excellent and one of the best character summarizations in the series. 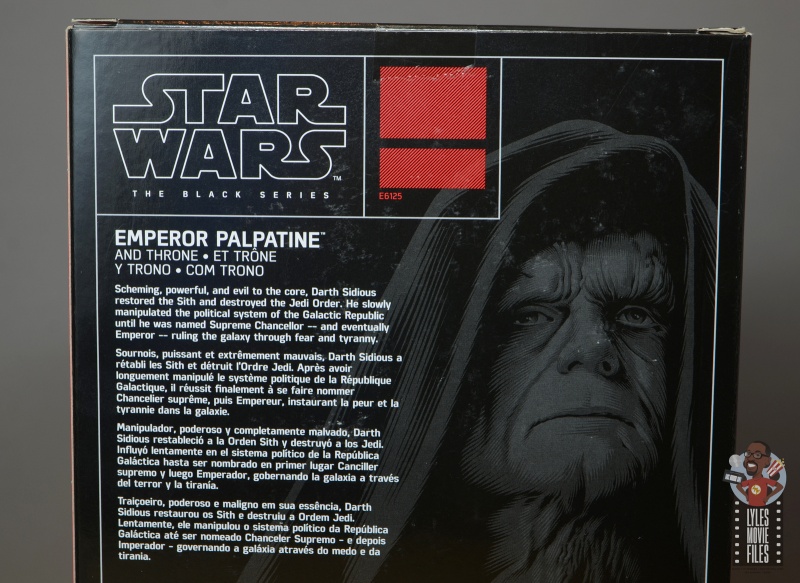 Likeness:  Emperor Palpatine was No. 11 in the line, which should give some insight on how long he’s been due for an upgrade. This one was worth the wait though. 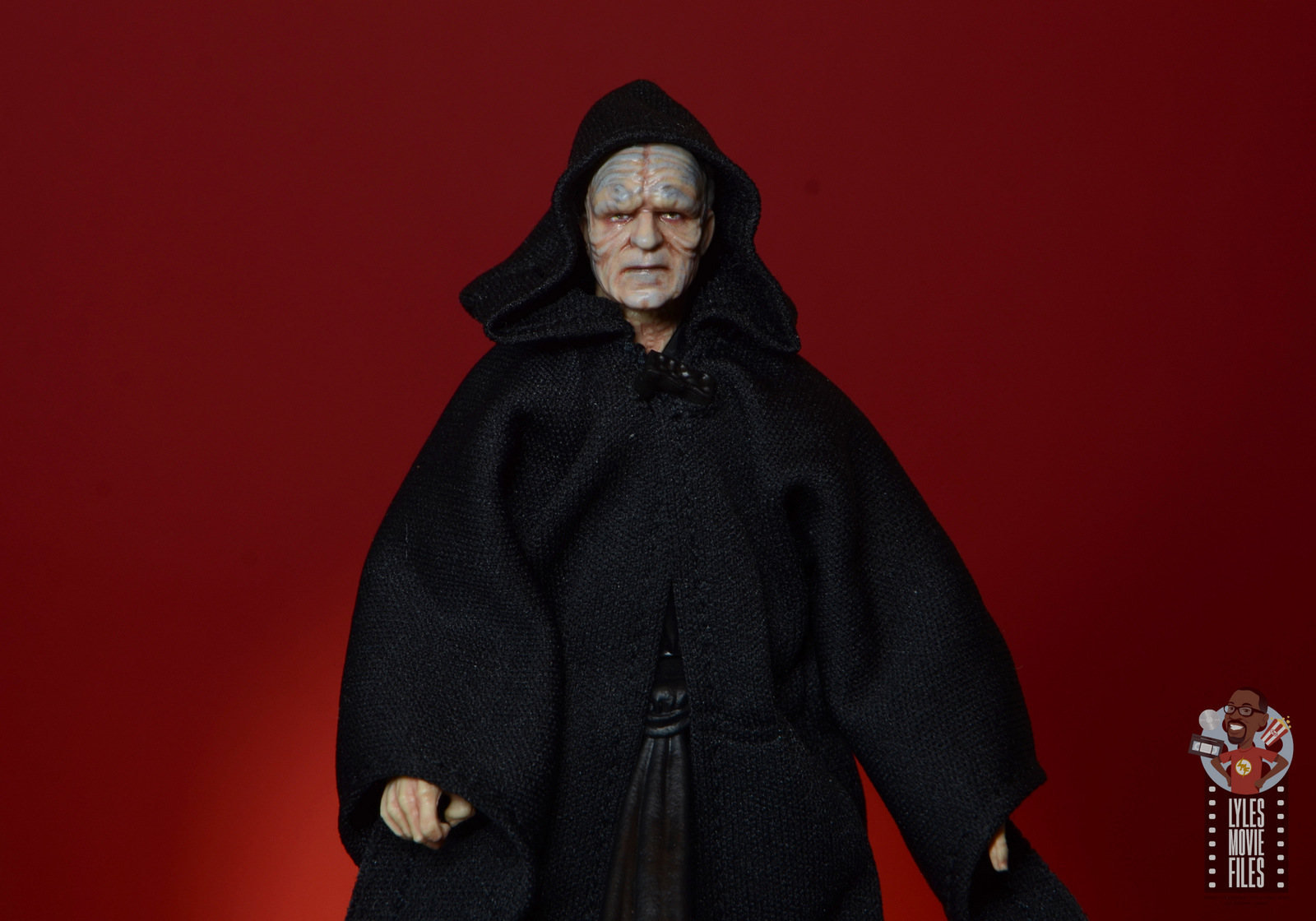 Hasbro wisely decided not to do any plastic parts with his outfit. This was a rare instance where the full cloth attire was the right way to go. There is a plastic sculpted body underneath, but to get the right flow for Palpatine’s attire this was the ideal execution. 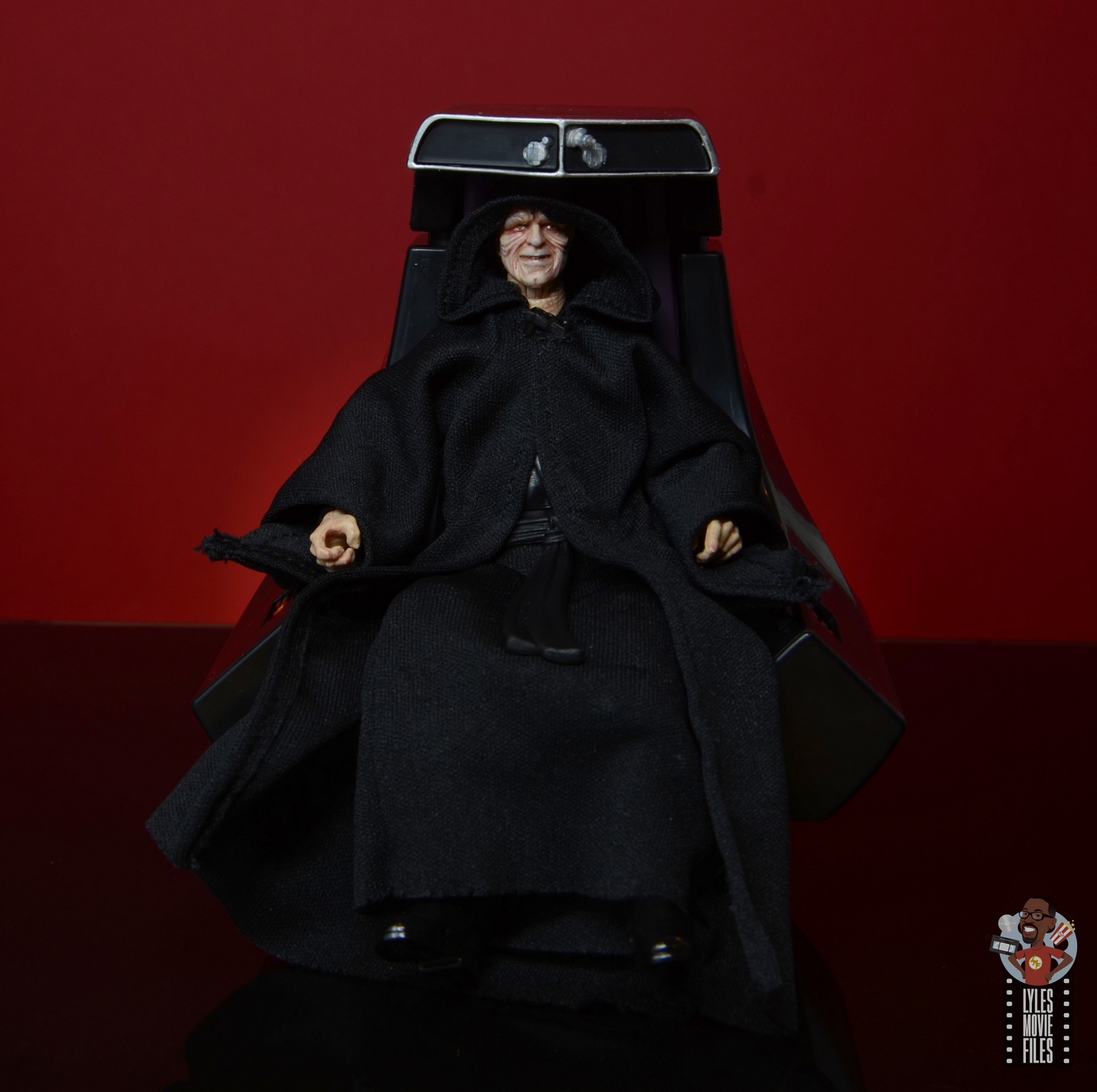 Paint:  Palpatine doesn’t have a ton of paint requirements. Most of it is the dirty wash on his face to convey his aged appearance. 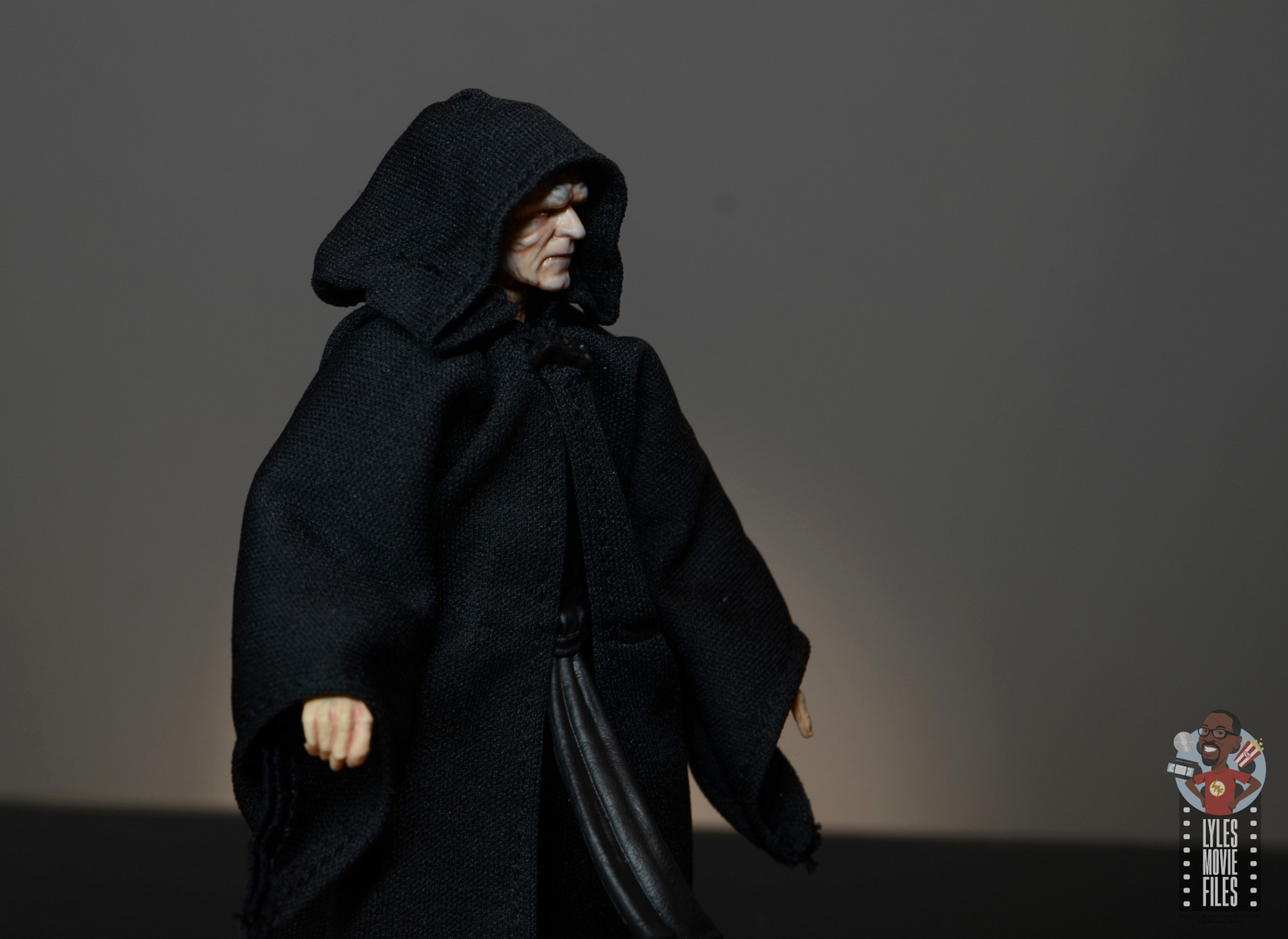 Scale:  The Emperor has lost some of his height and old age has him hunched over more now. He needs to be shorter than every character save Yoda and droids. 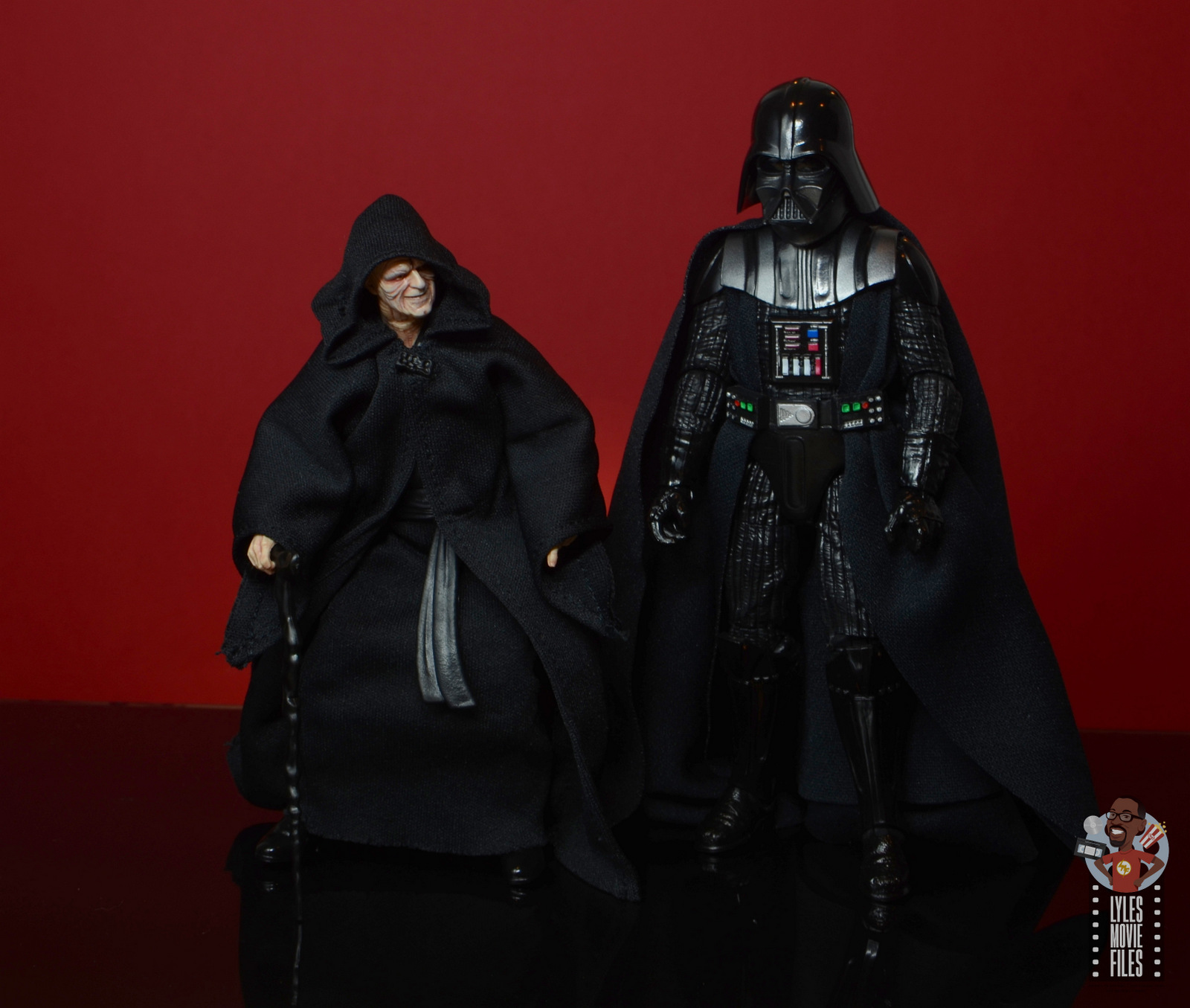 He’s appropriately shorter than Darth Vader and the Stormtroopers. 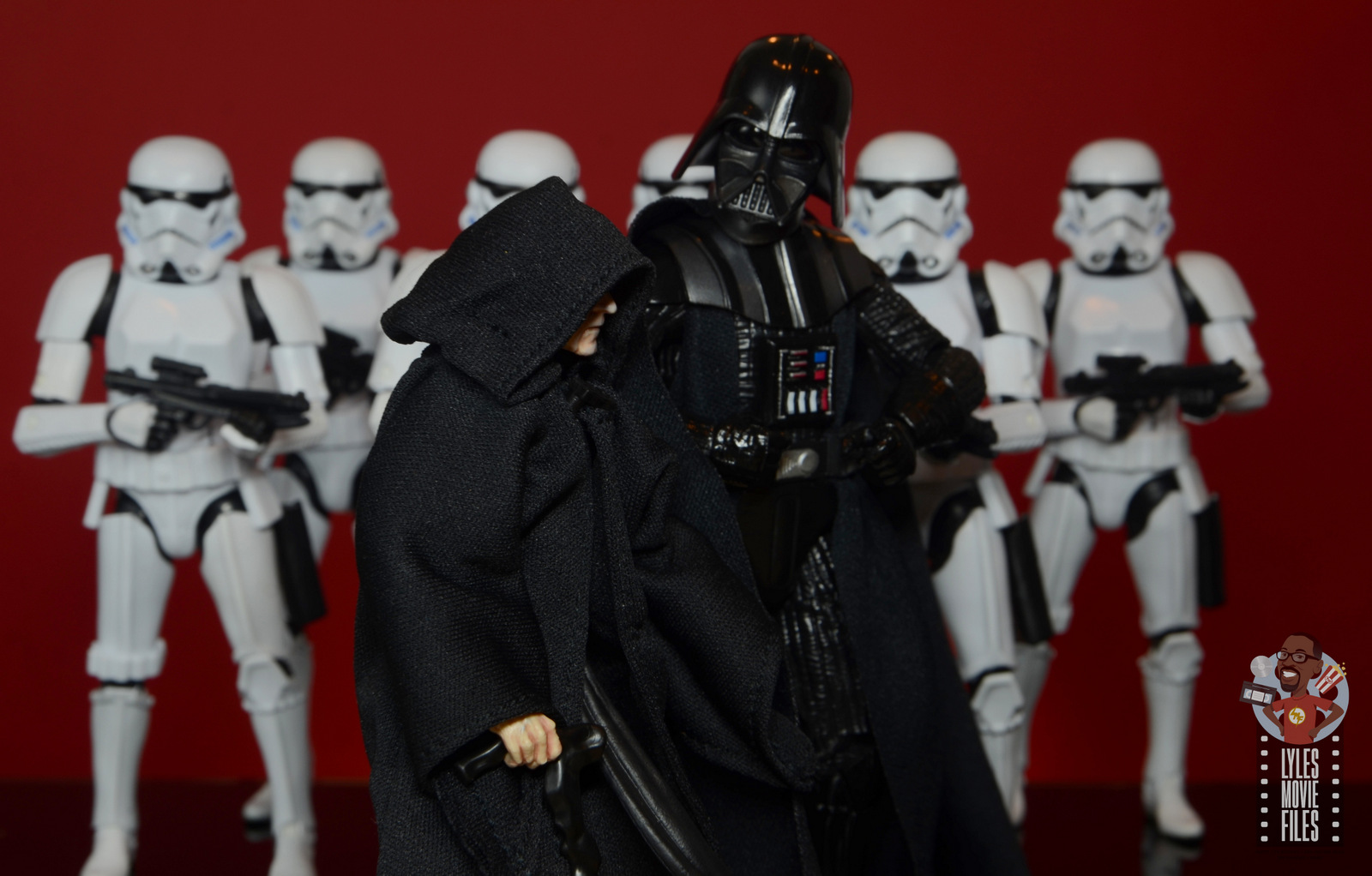 Articulation: The Emperor really doesn’t need a ton of articulation. His default position is sitting in his throne. He does that just fine and has enough room to get maneuvered around it a bit. 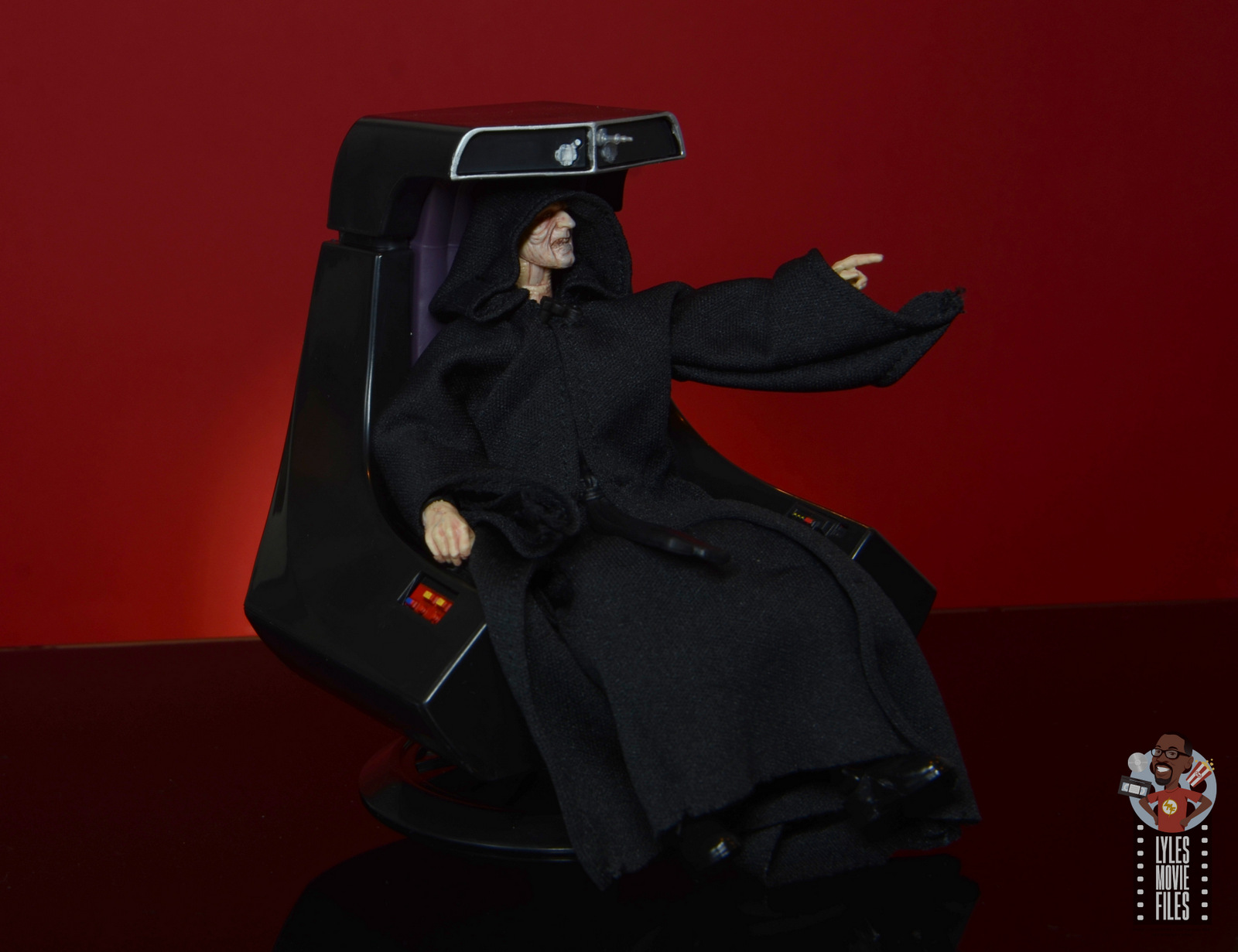 The downside of the body is it doesn’t allow for a natural hunching or sloped stance so he can naturally use his cane. 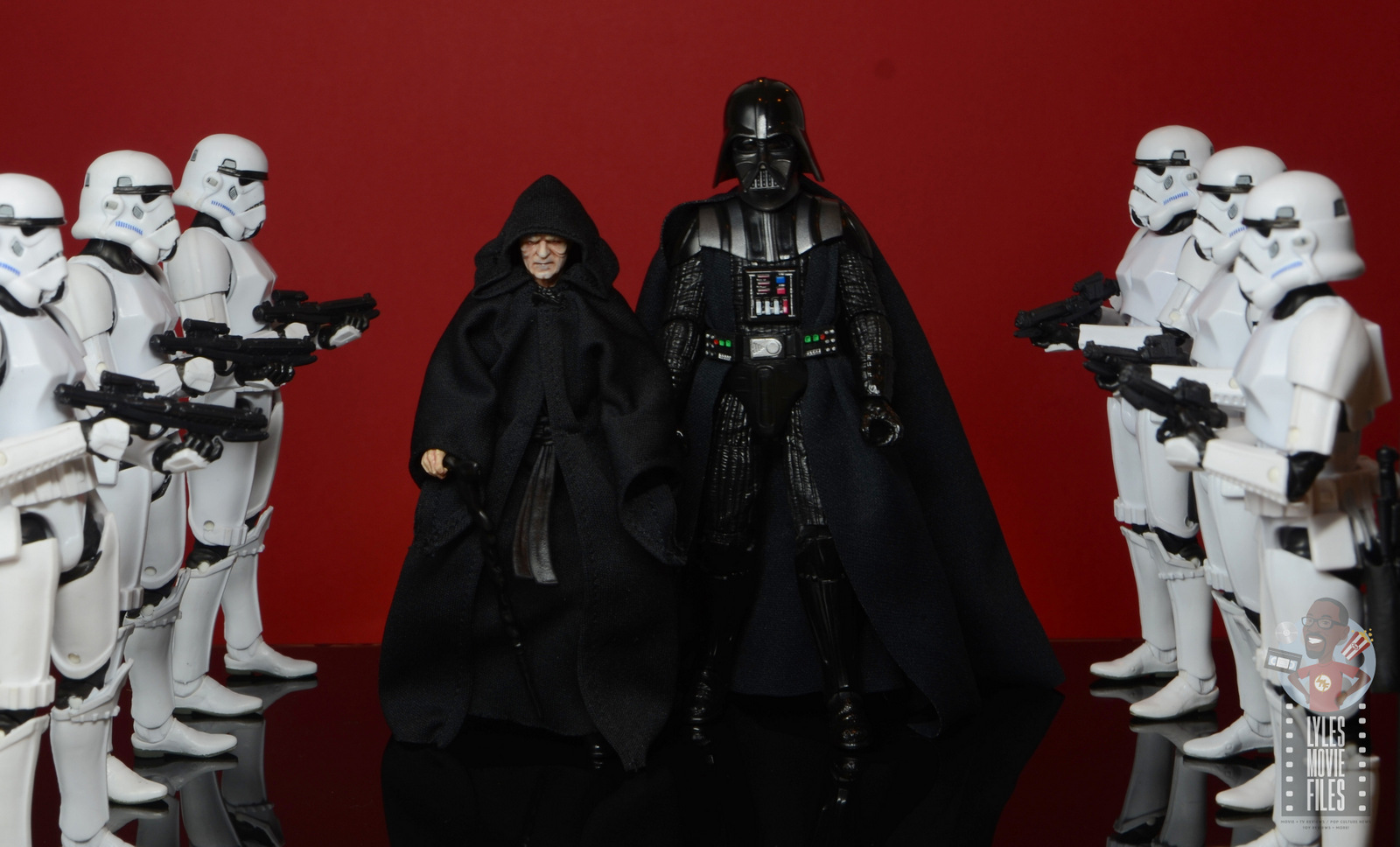 Clearly the only other money pose for Palpatine is throwing out a little Force lightning and there’s no issue with arranging him to fire away at Luke Skywalker. 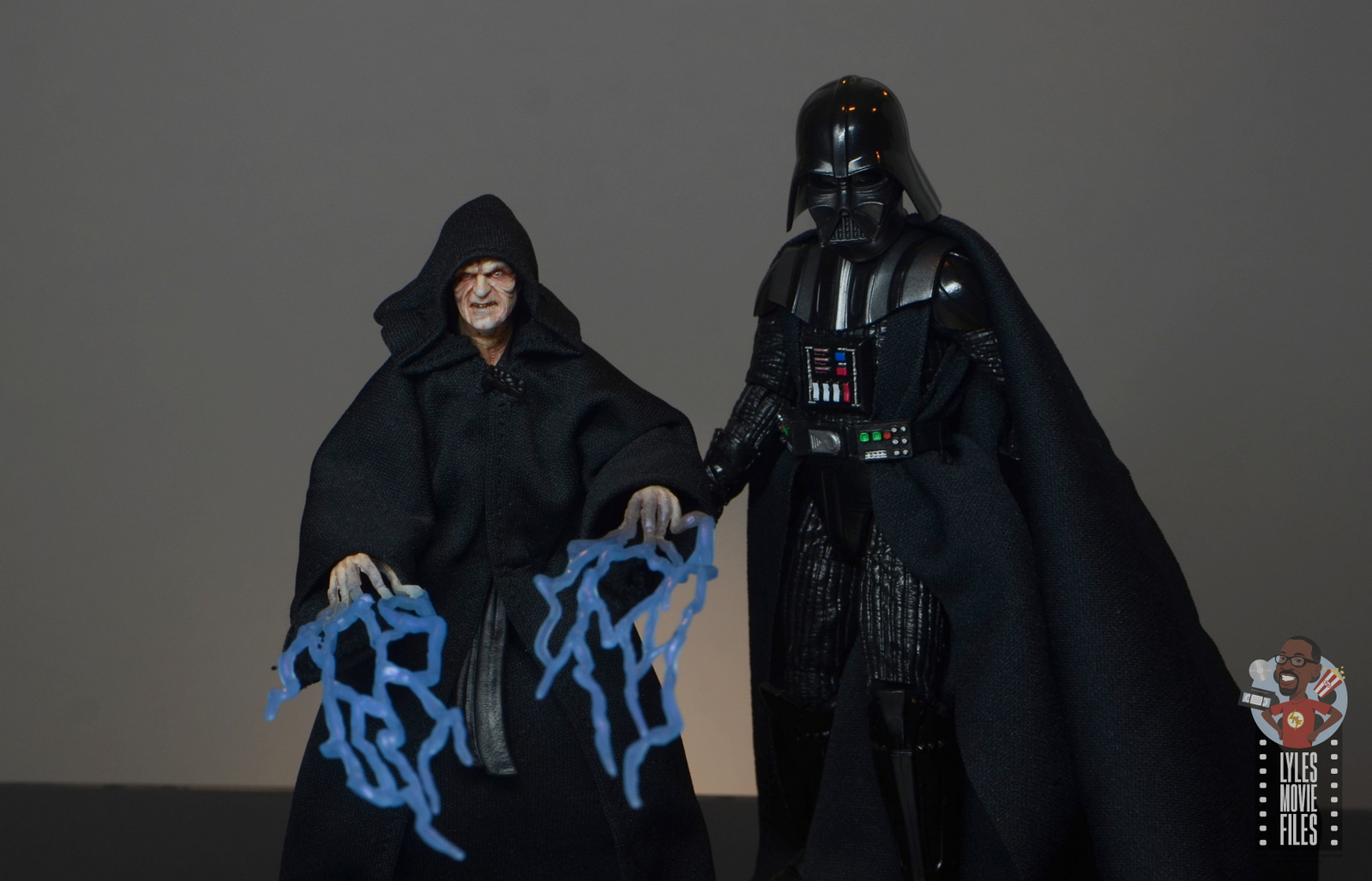 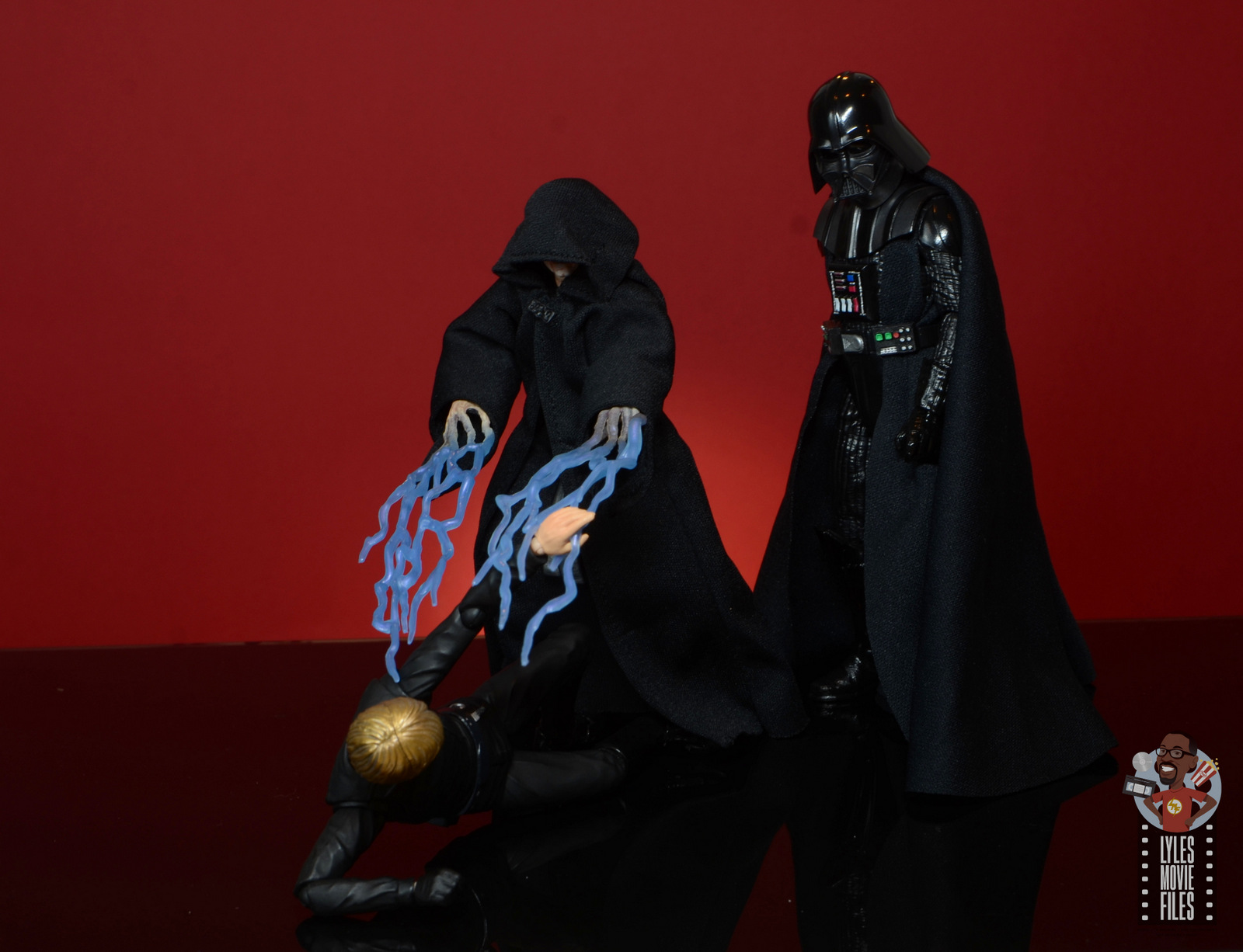 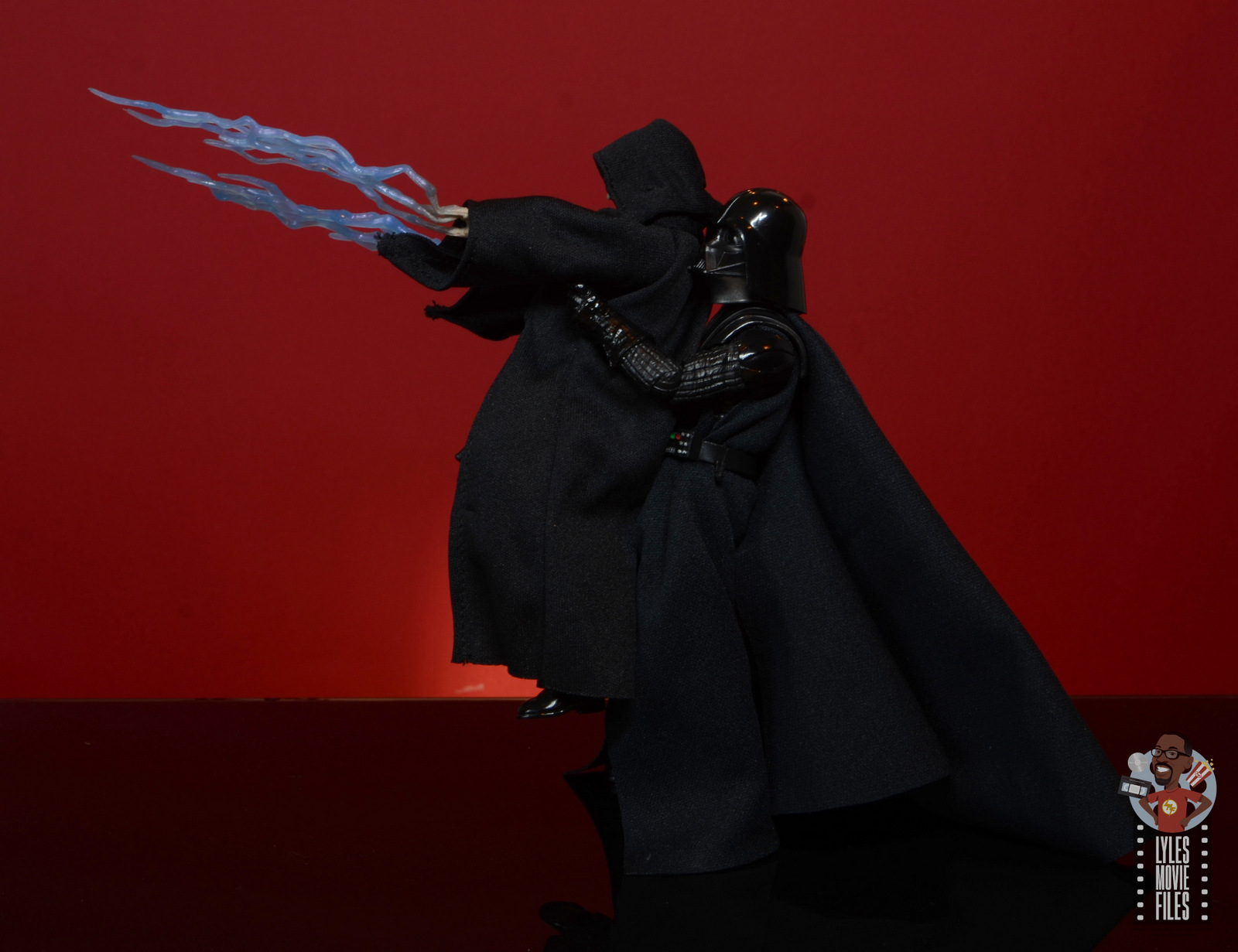 Accessories:  The Emperor’s big accessory is his throne. 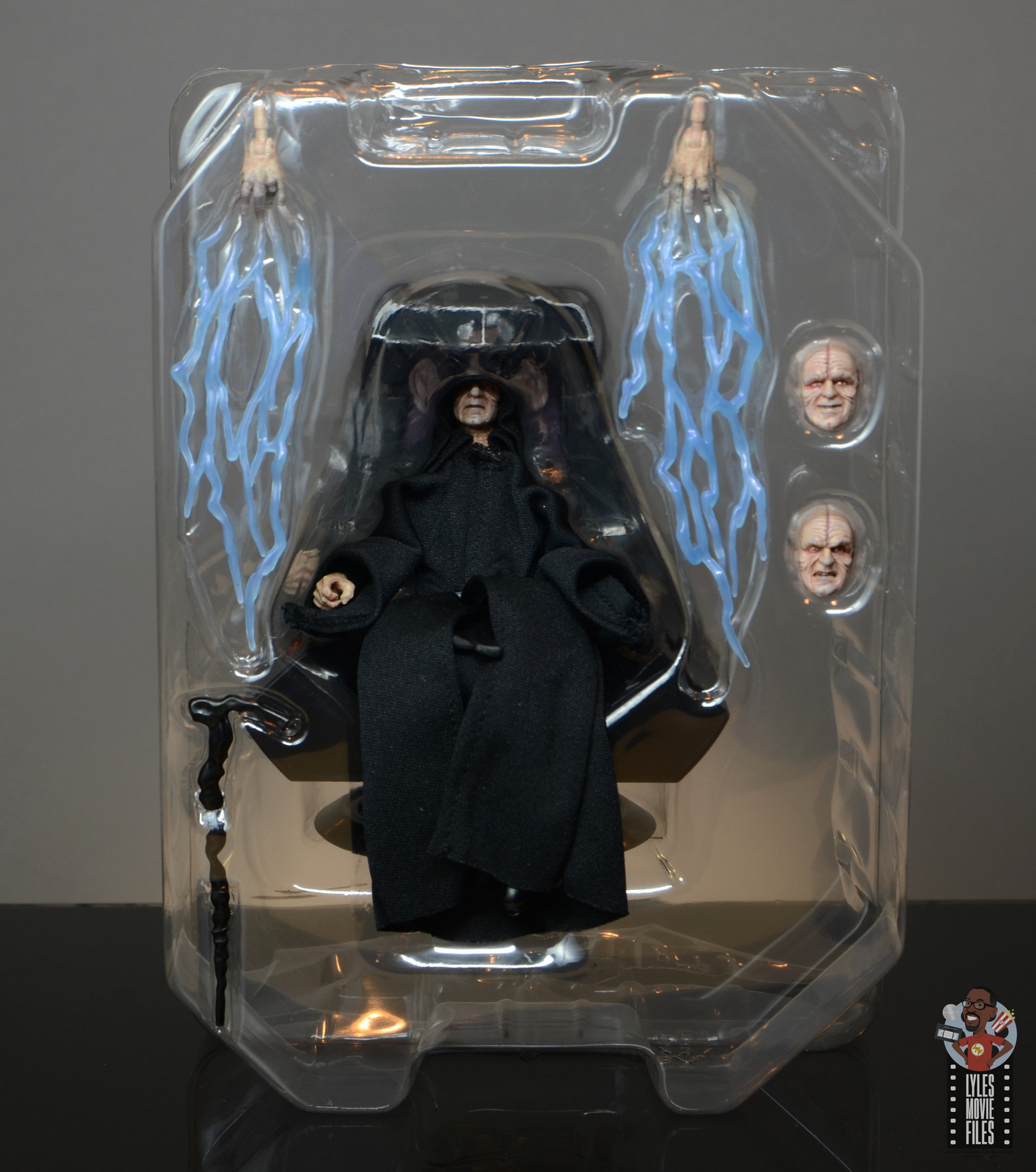 By this point in the saga, his unlimited power meant he was good for short bursts of electricity and then chilling in his victory throne. 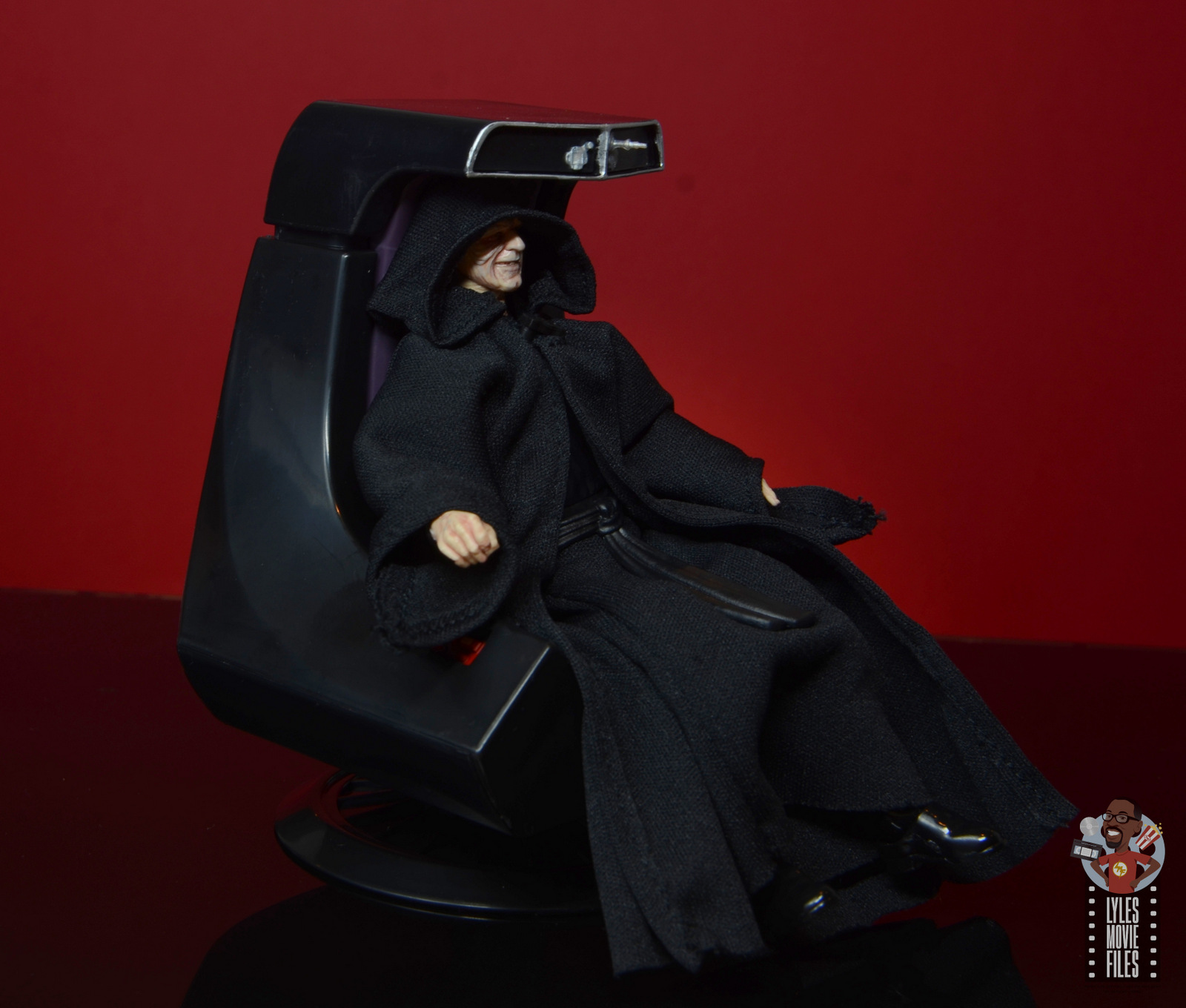 It has a nice heft and isn’t done in a shortchanged fashion. All of the details I could make out from ROTJ are intact from the horned points and sloped recliner portion.

You won’t be able to rotate it for the full dramatic meeting of Luke and Palpatine, but that’s hardly a problem. 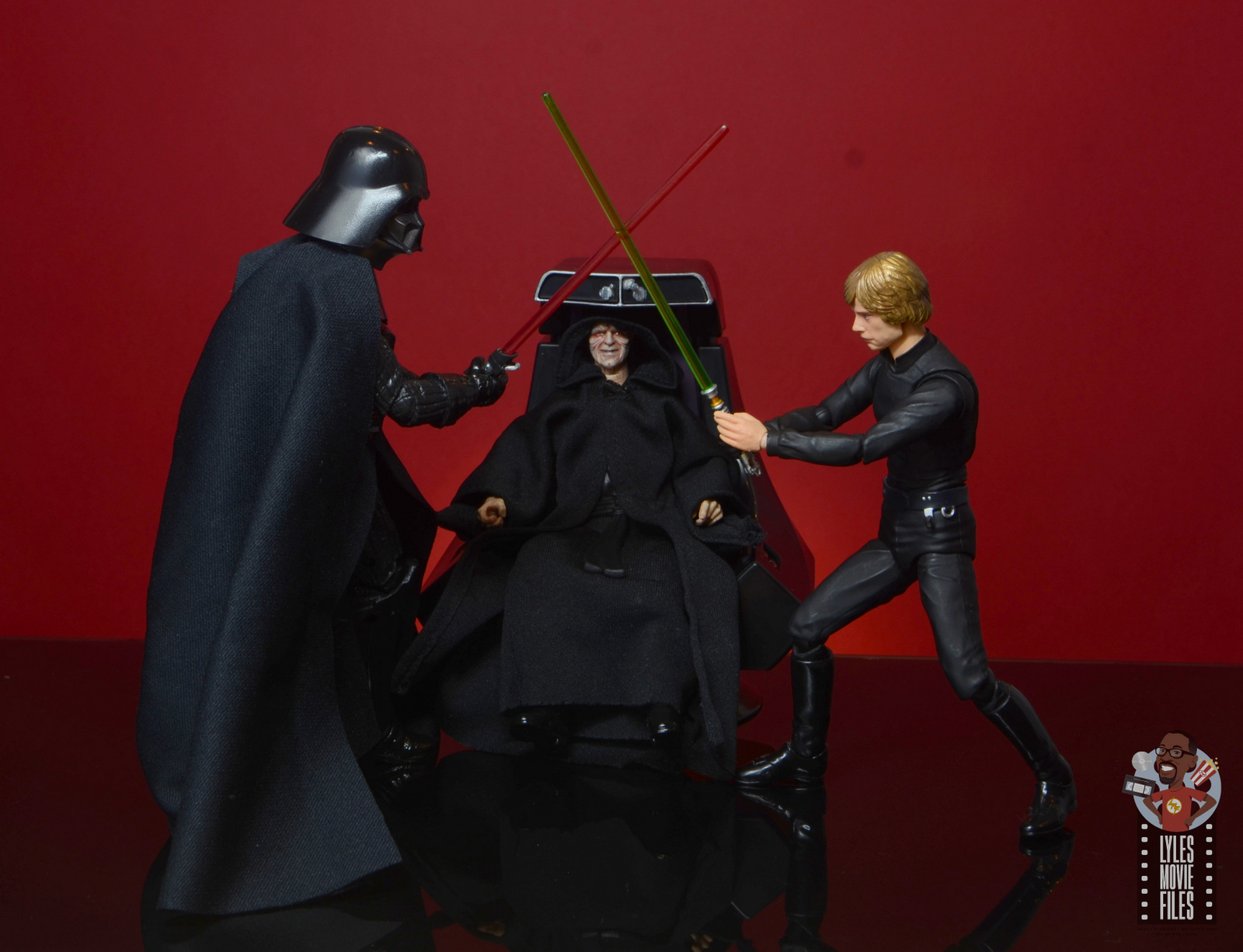 He’s also got swappable hands with Sith lightning. I like the shade of blue here as it looks a bit lighter and of a higher intensity, which would make sense for Palpatine. 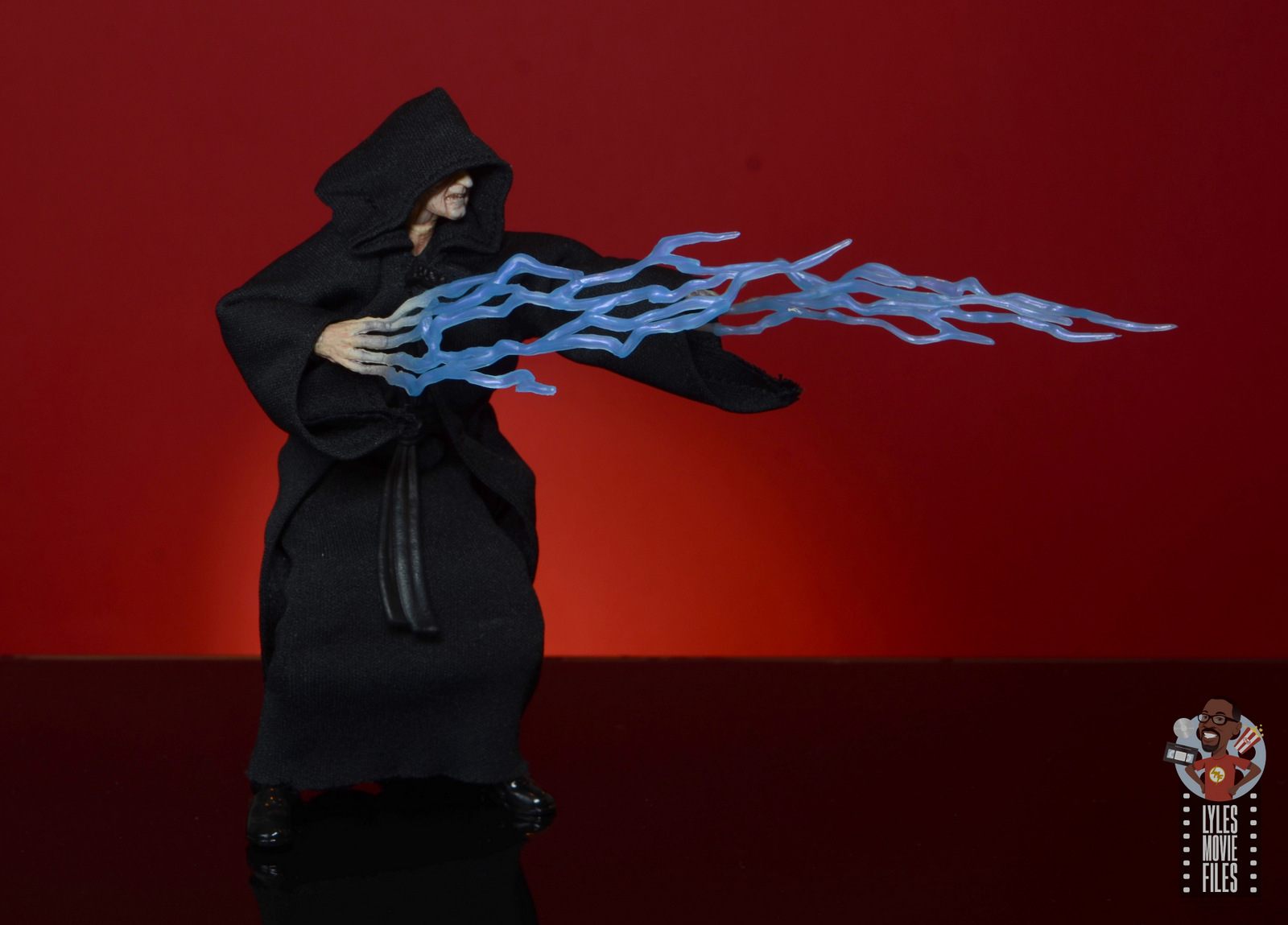 Another nice addition are the two swappable heads. One features the insidious grinning ‘you, like your father are now mine’ expression. 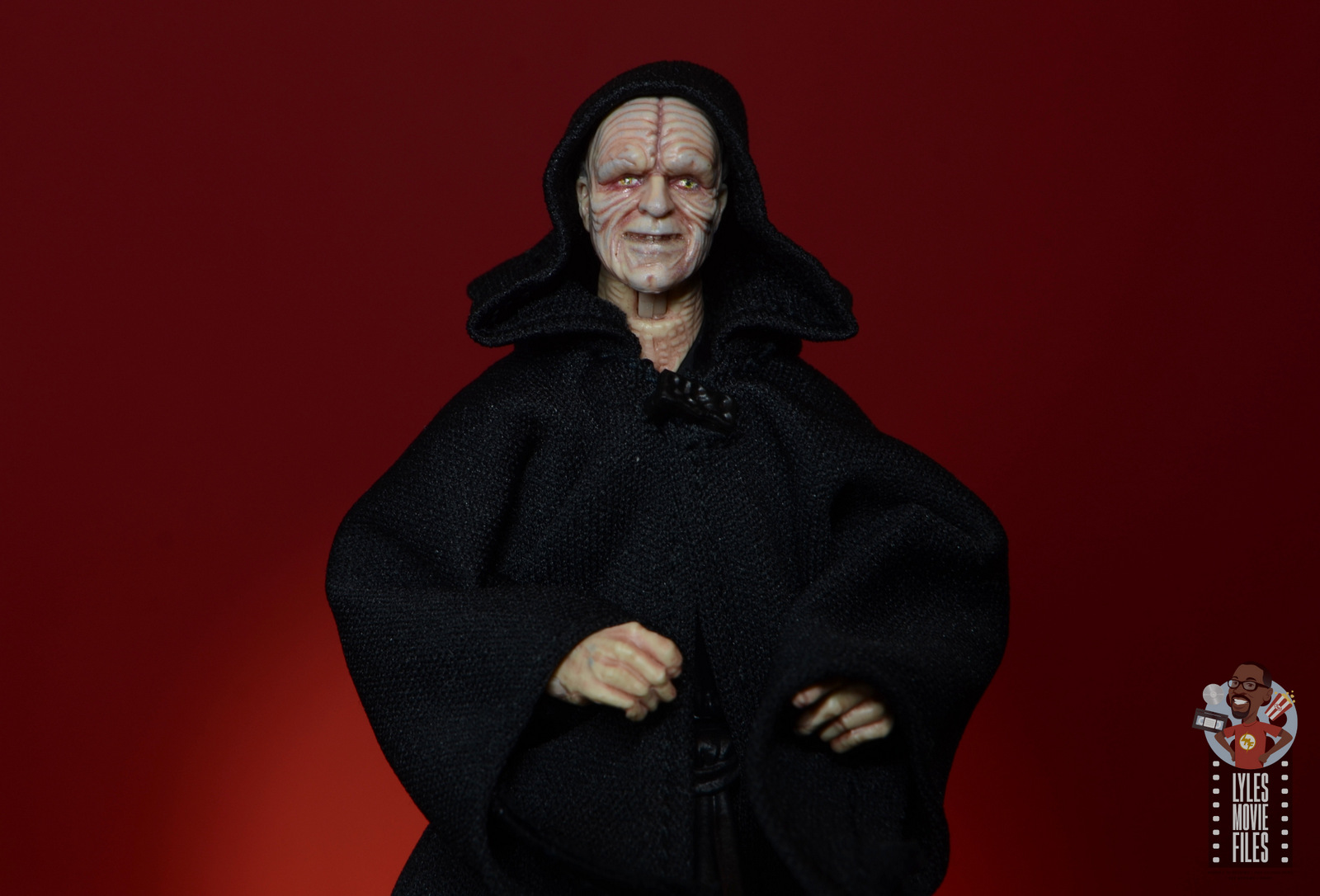 The other is an angry ‘you will die expression.’ 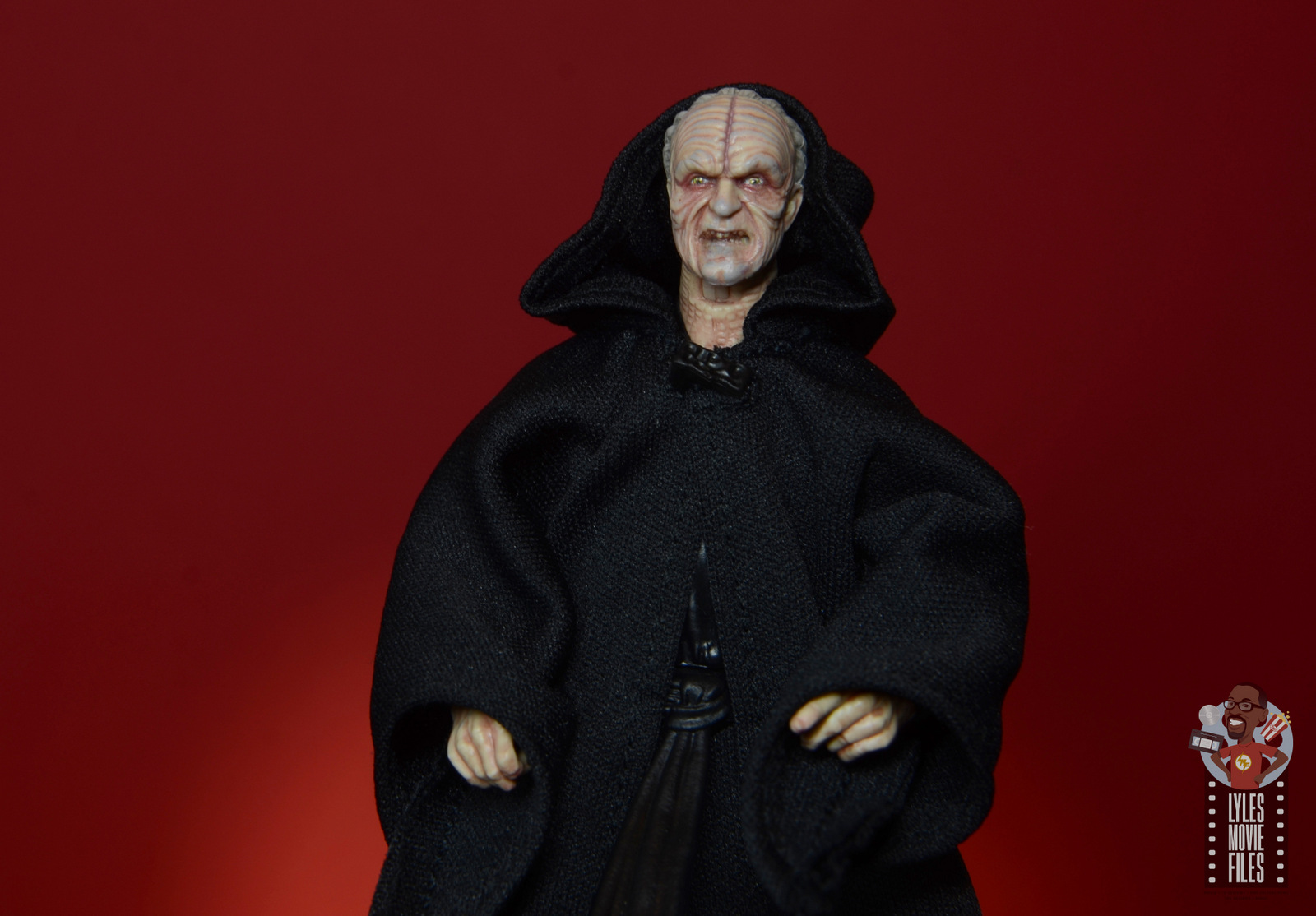 Finally, Palpatine’s walking stick is included. It’s appropriately curled and mangled at just the right height when you have him properly hunched over. 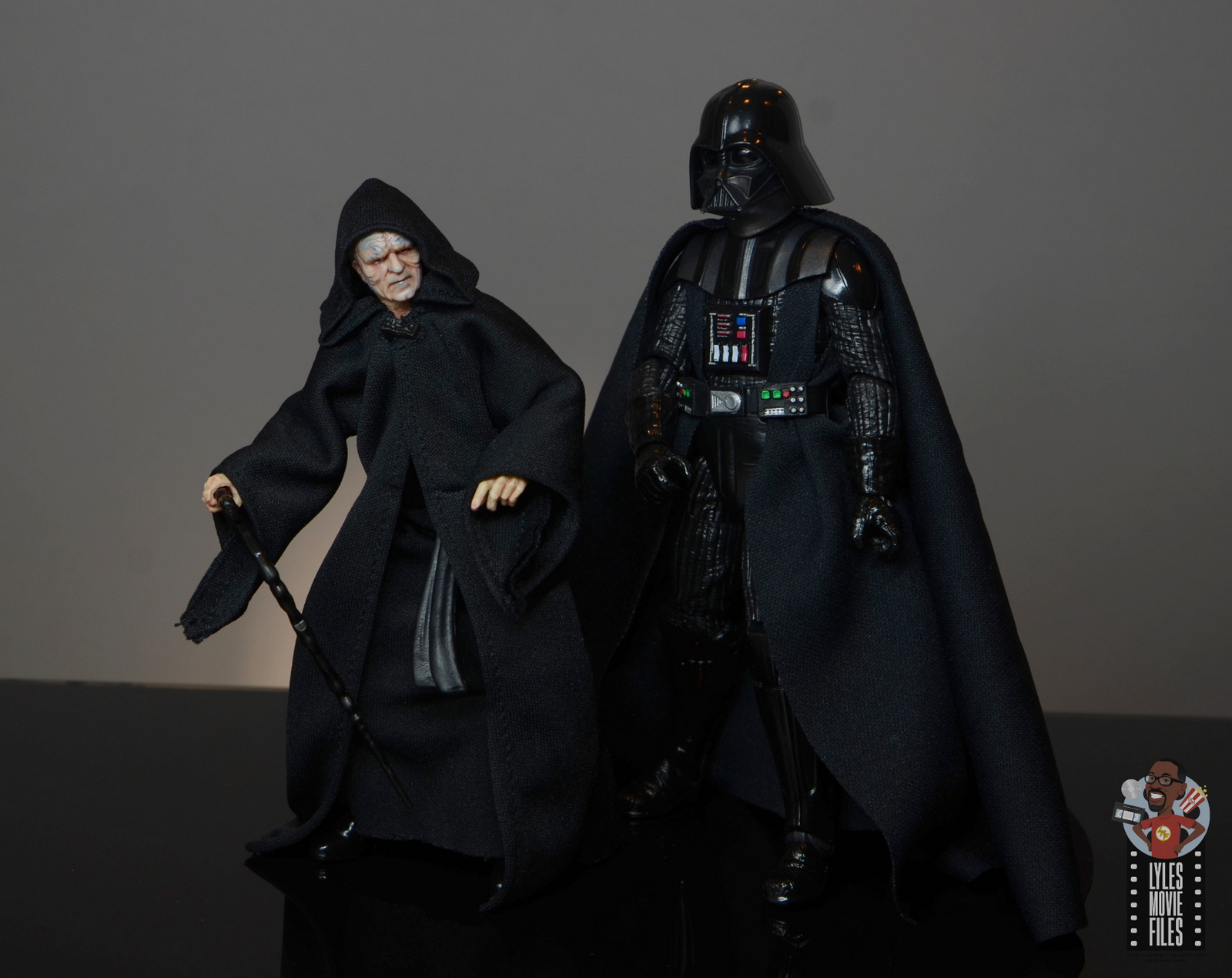 This is a figure that every Original Trilogy fan would likely want in their collection so Hasbro probably should get this back into circulation at some point.

Emperor Palpatine is a great showcase piece and an ideal centerpiece for a Return of the Jedi display. If you’ve got the cash, I highly recommend this one. 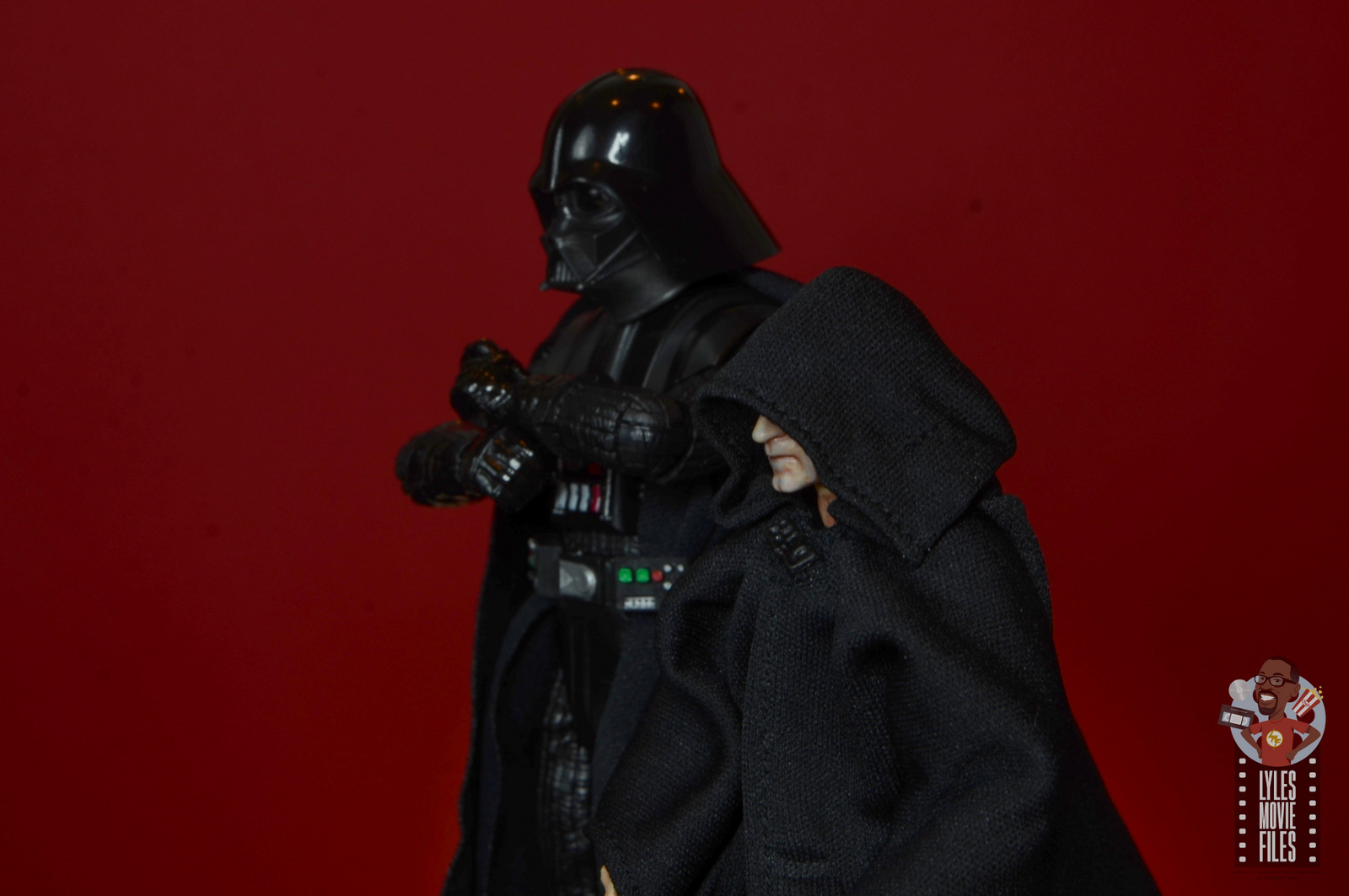