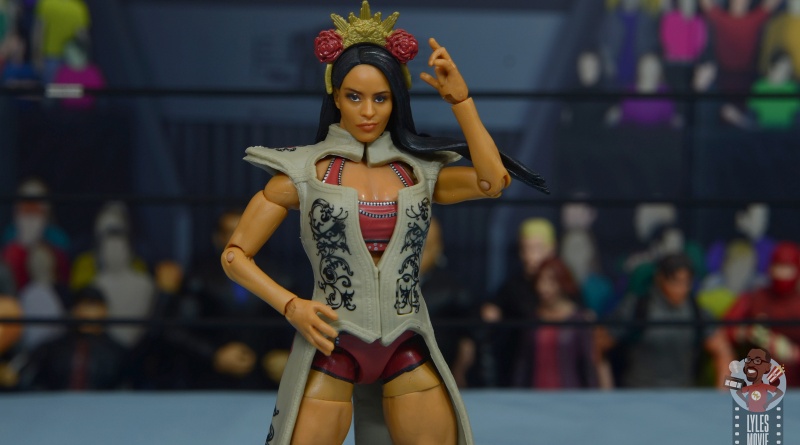 Ironically, a day before Zelina Vega made her return to the WWE, I found her WWE Elite 84 figure. Retailer exclusive figures aren’t normally that easy for me to track down especially when I didn’t even realize it was time to start hunting so I happily grabbed one of my favorite modern women stars dating back to her run in TNA Impact.

This was a smart figure for Mattel to release as my interest in grabbing an Angel Garza figure has increased dramatically.

Packaging:  Elite 84 has the slightly updated color scheme with the dominant white with red accents. As a Target retailer exclusive, her exact line number is not included and is replaced by a RAW Collector’s Edition.

My figure’s package was beat down and brutalized, but as a non MOC-collector, it didn’t matter outside of these shots. Mattel copywriter Roger Rudman didn’t have an extensive career to work with in this case, but as usual, the bio is solid. 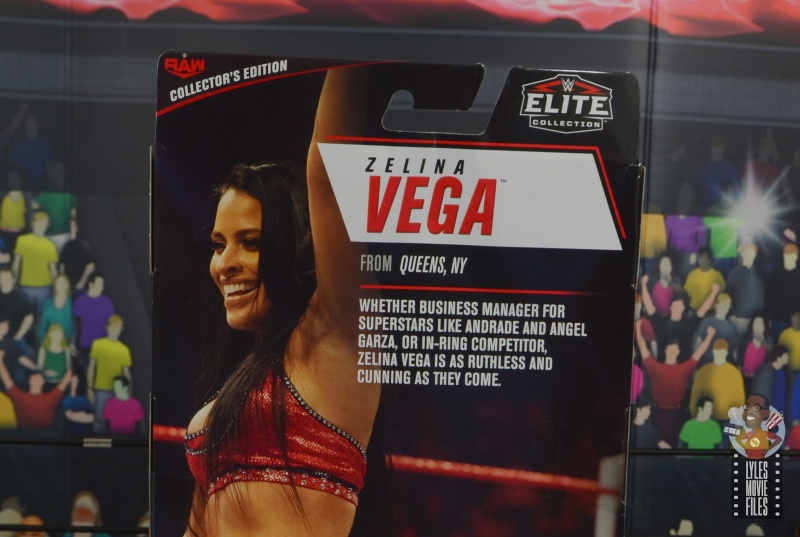 Likeness:  It’s funny how in both reference pics, Zelina is smiling while her figure has her focused smirk. That actually works better in this case as Zelina gives off more attitude than a smiling babyface. And it doesn’t hurt that the likeness is killer.

It even has the slight hint of Zelina’s teeth showing. That’s a high degree of execution and Mattel over delivered on my expectations. I’m sure her Twitch followers would recognize her off the head sculpt alone. 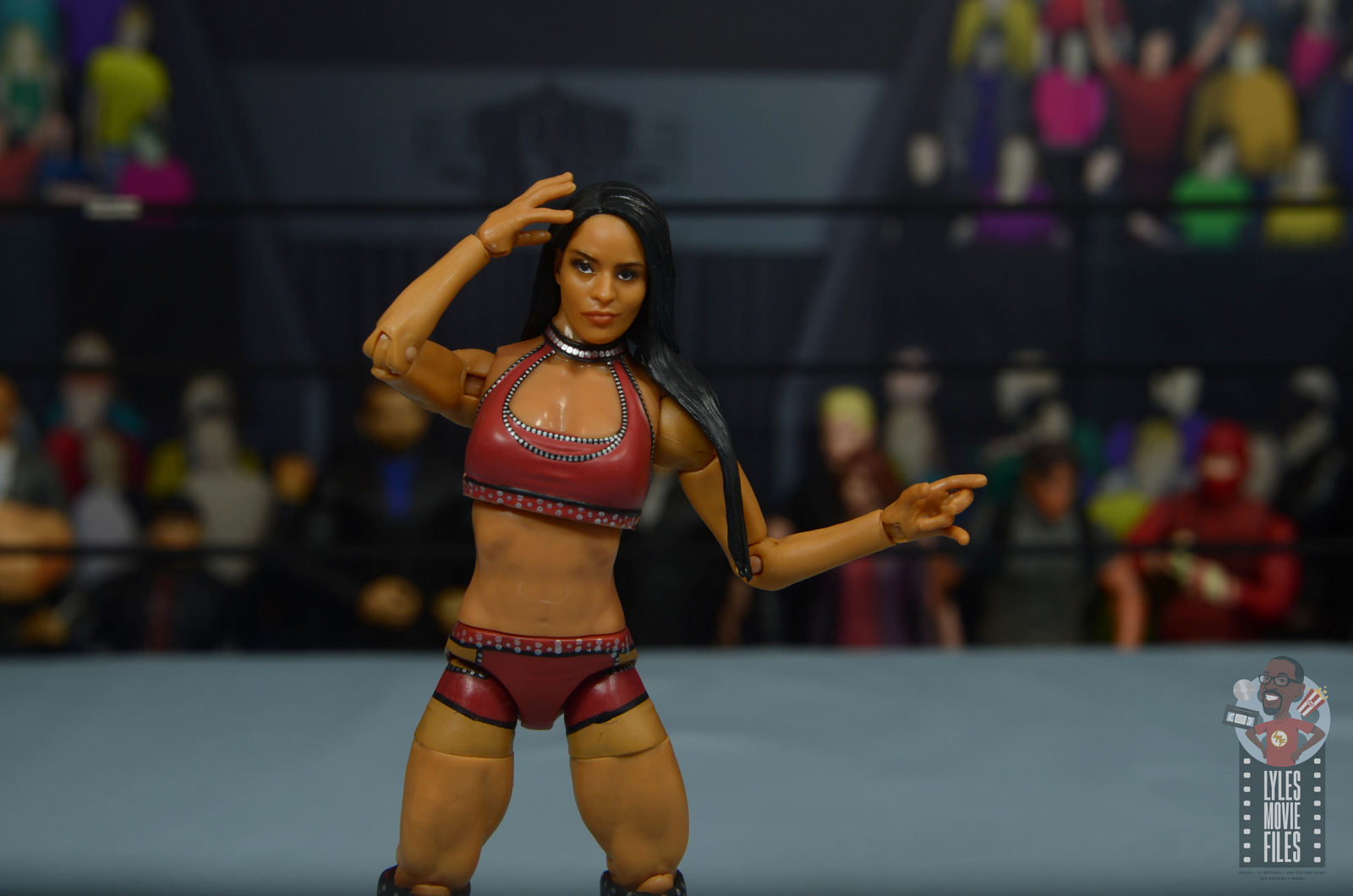 This is Zelina in her ring gear and not her business savvy manager look. I can’t place the base model of the figure, but Zelina doesn’t wear a second shirt or have an additional layer of trim around her cleavage. I suppose the intent is to deemphasize her chest?

I’m guessing Mattel went with the AJ Lee/Sasha Banks mold for her mid torso down. Her defined abs are conveyed on the figure and while her unique outfit isn’t sculpted, the paintwork does account for the slits in her shorts. 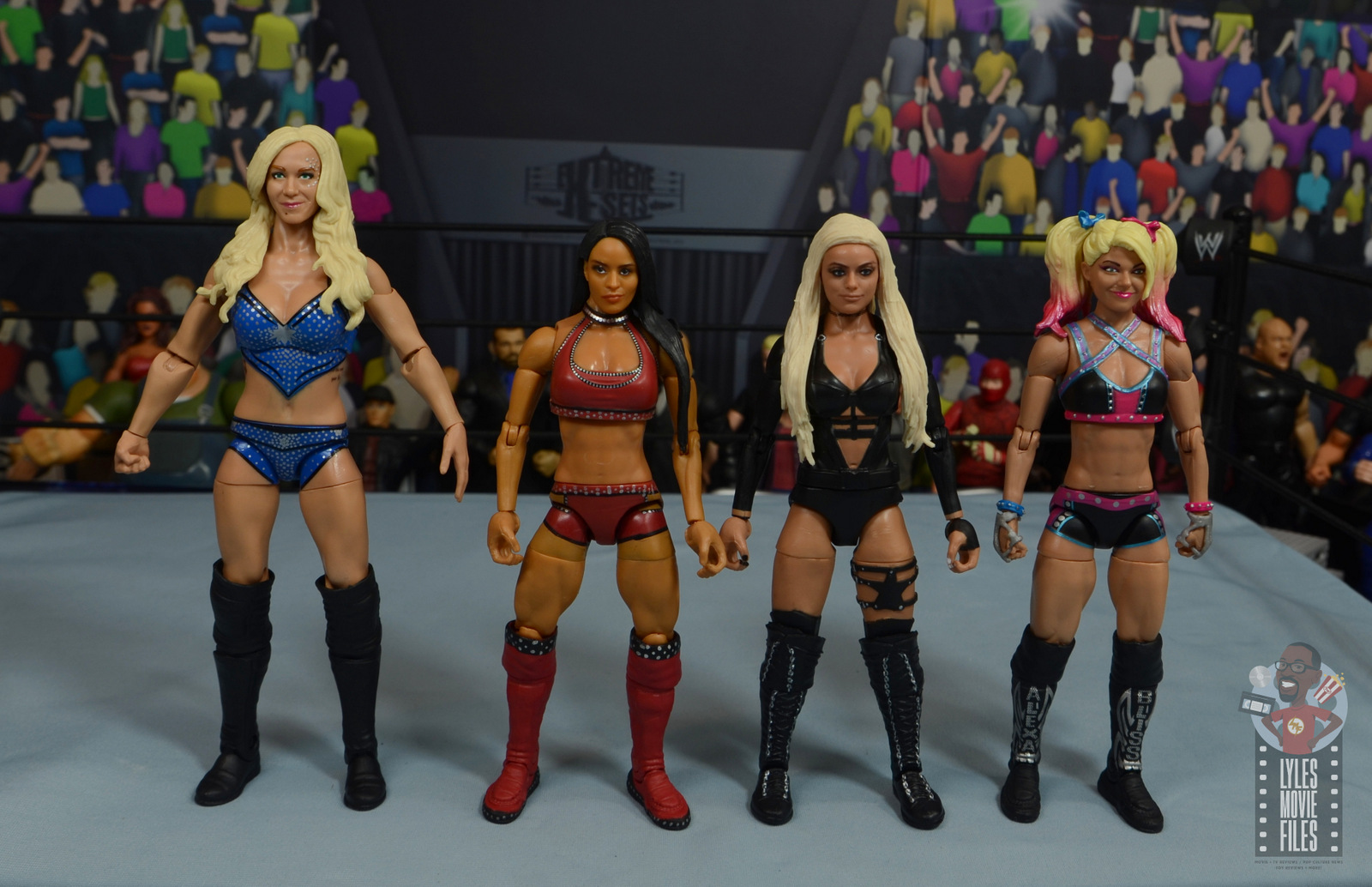 Scale:  At 5’1” Zelina is easily one of the shorter members of the WWE roster. She’s looking up at fellow wrestlers like the 5’4” Liv Morgan and the 5’3” Asuka while looking eye to eye with the 5’1” Alexa Bliss. 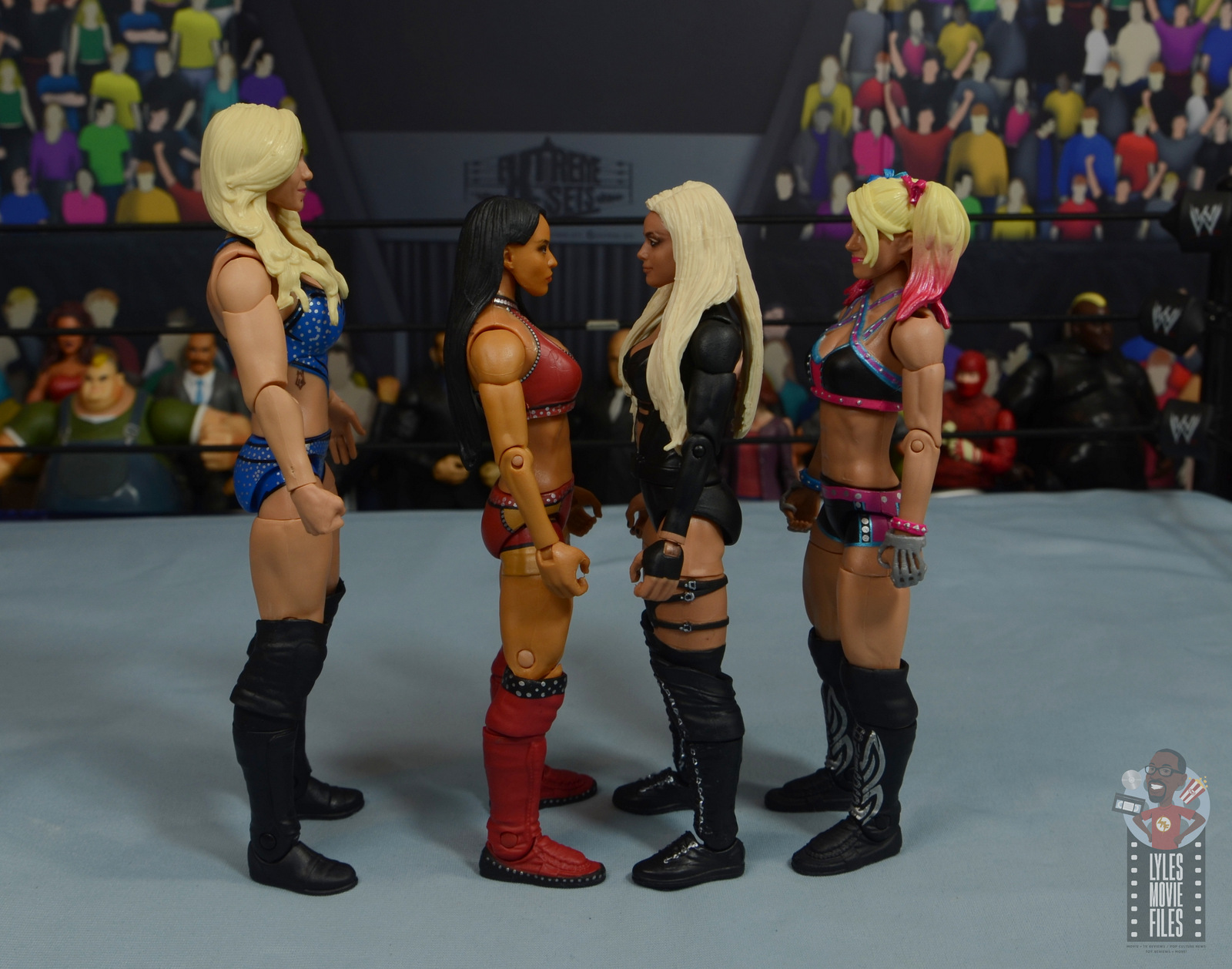 Paint:  Like Io Shirai, Zelina’s outfit is dinged a little for the struggle to adequately convey the bling. Mattel uses silver dots to replicate it, but it’s really does look like randomly painted dots instead of carefully placed embroidered jewels. 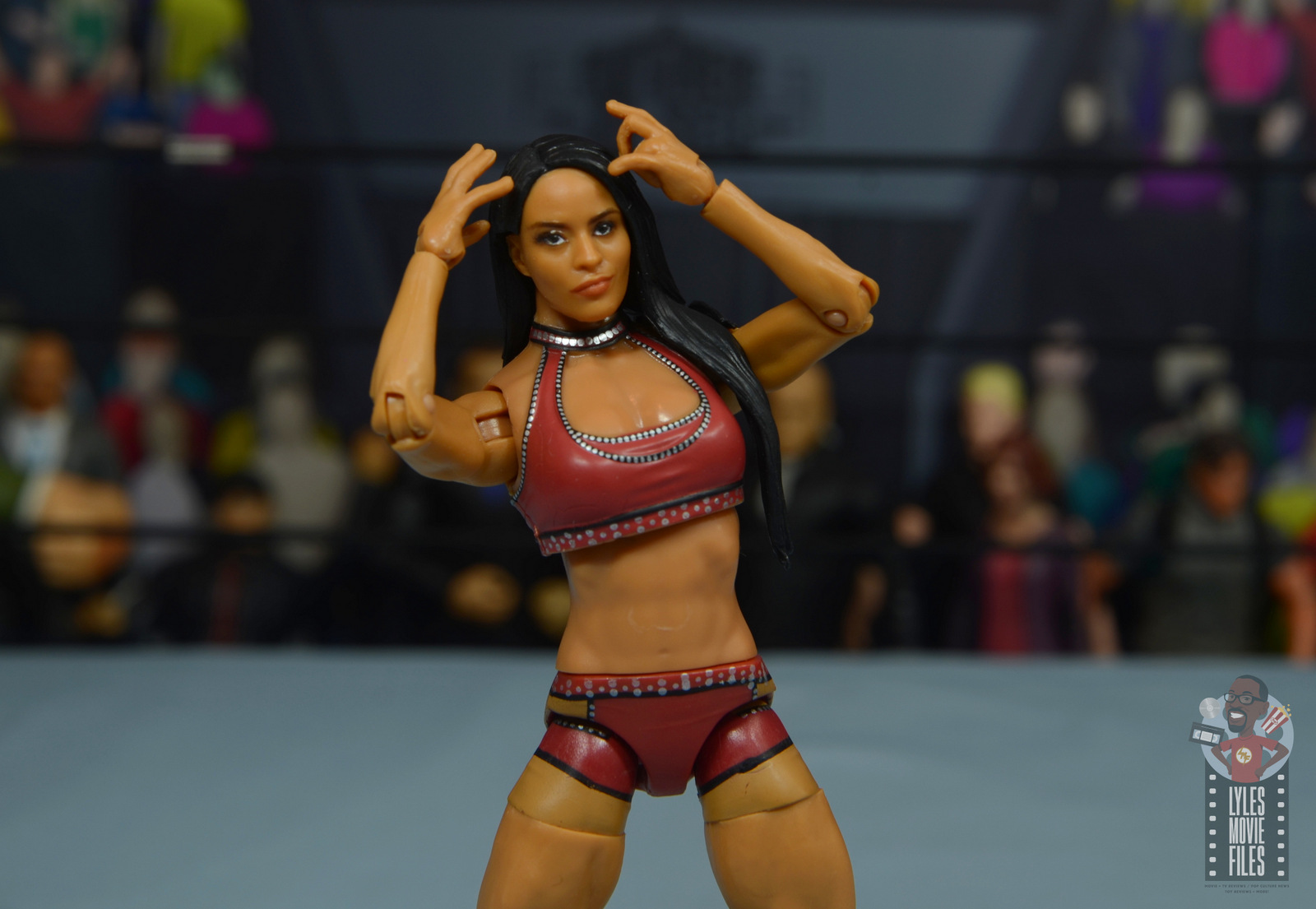 I couldn’t find a reference photo of Zelina in this exact color outfit. That’s not to suggest Mattel made a mistake since Zelina rocks various colored outfits. I do wish Mattel went with the dark purple Zelina used in some of her promotional pics. That color would stand out more and it just looks cool. 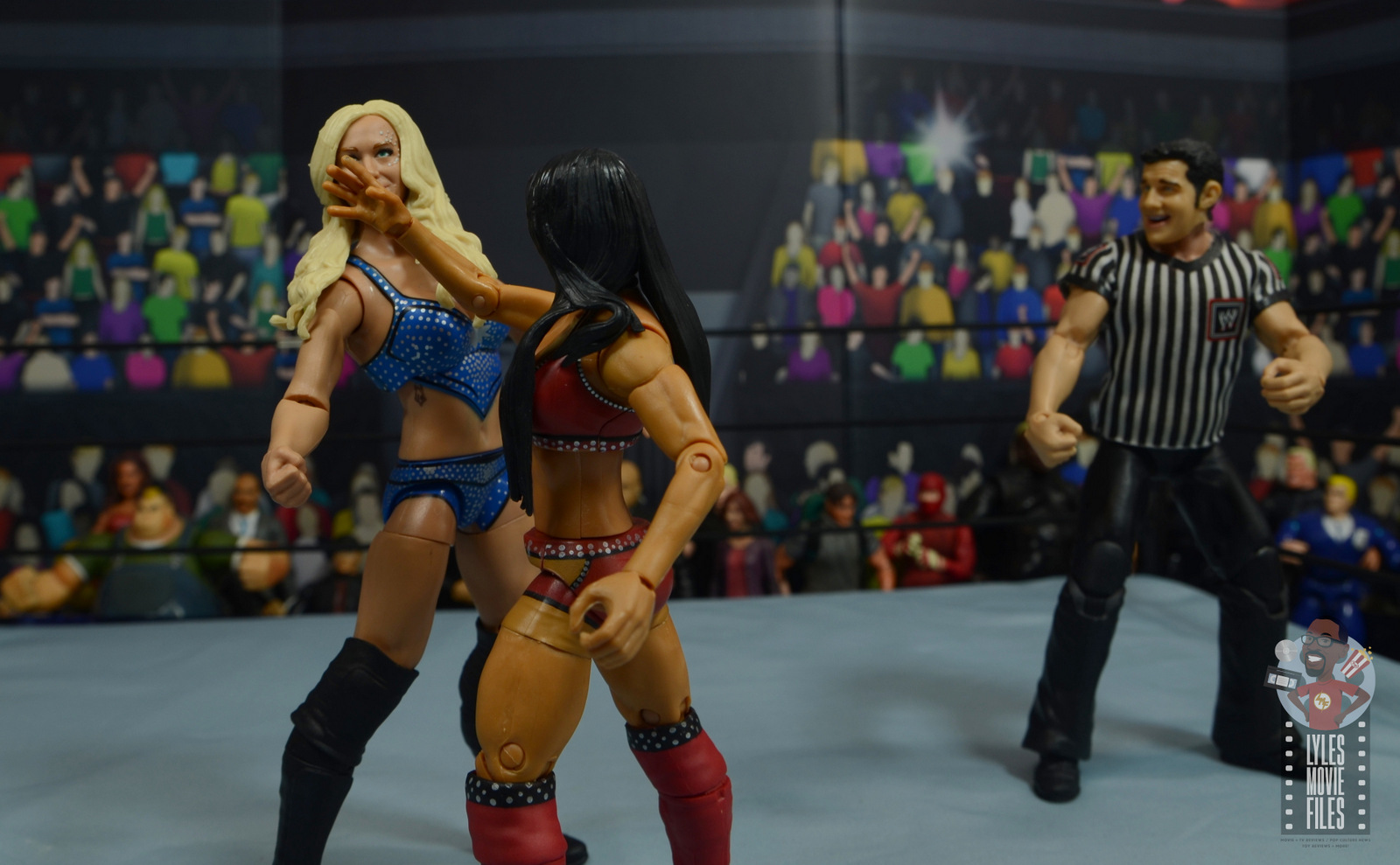 Articulation:  This mold is very solid for pulling off moves. Io Shirai is now my default preference in terms of movement off this standard Elite body, but this one isn’t too far down. Better range of the elbows will get fixed with the move to double-jointed elbows. 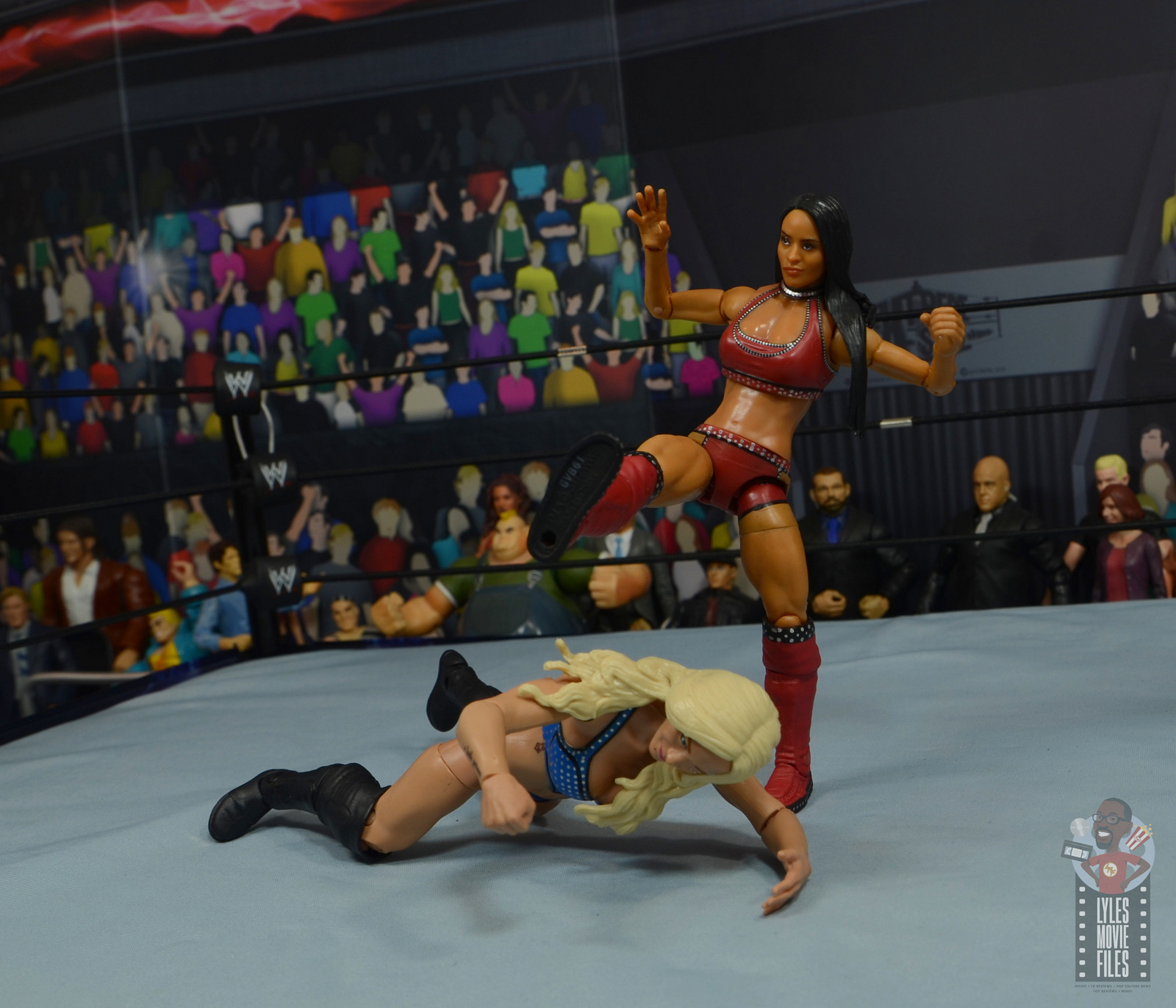 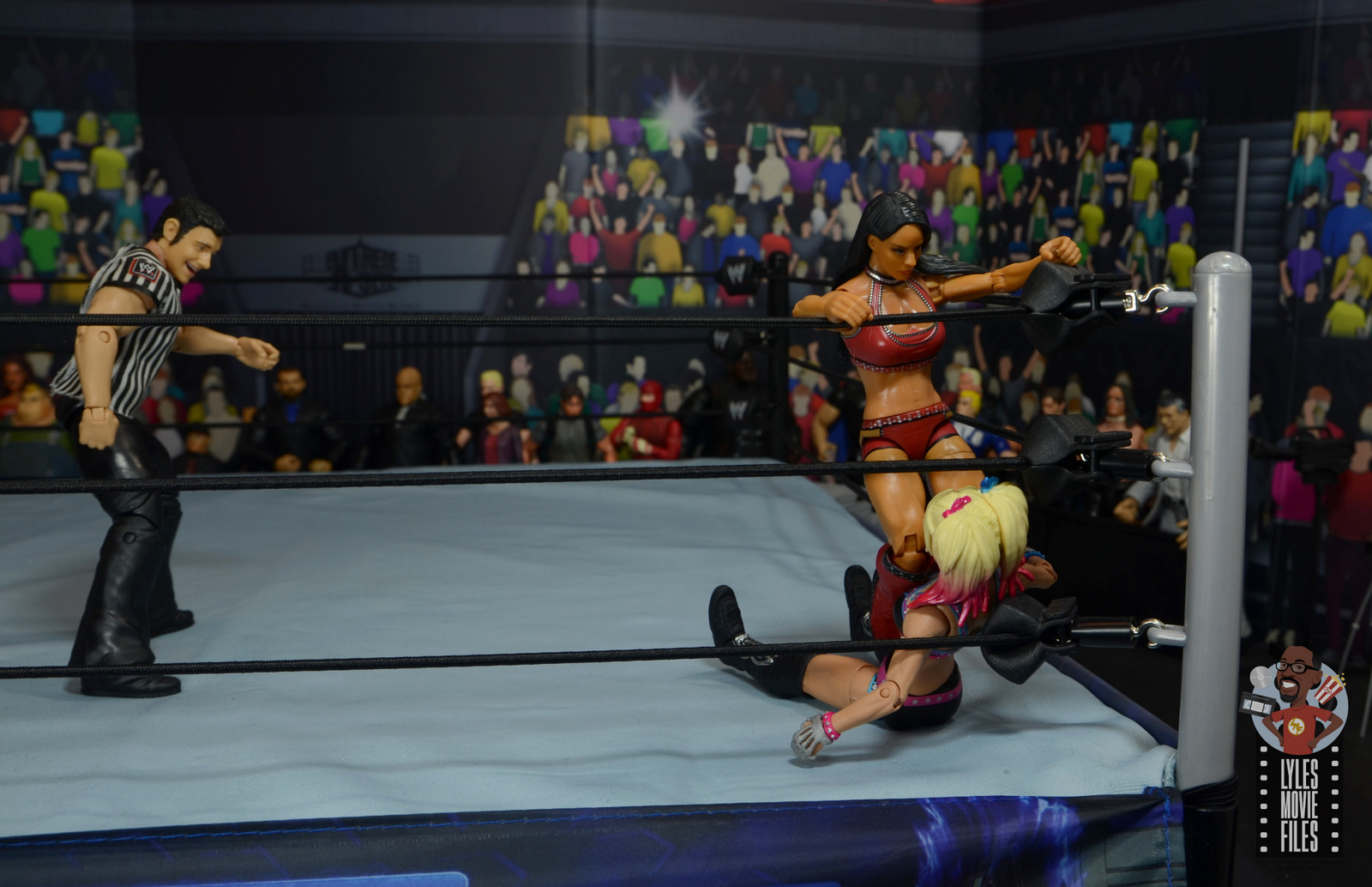 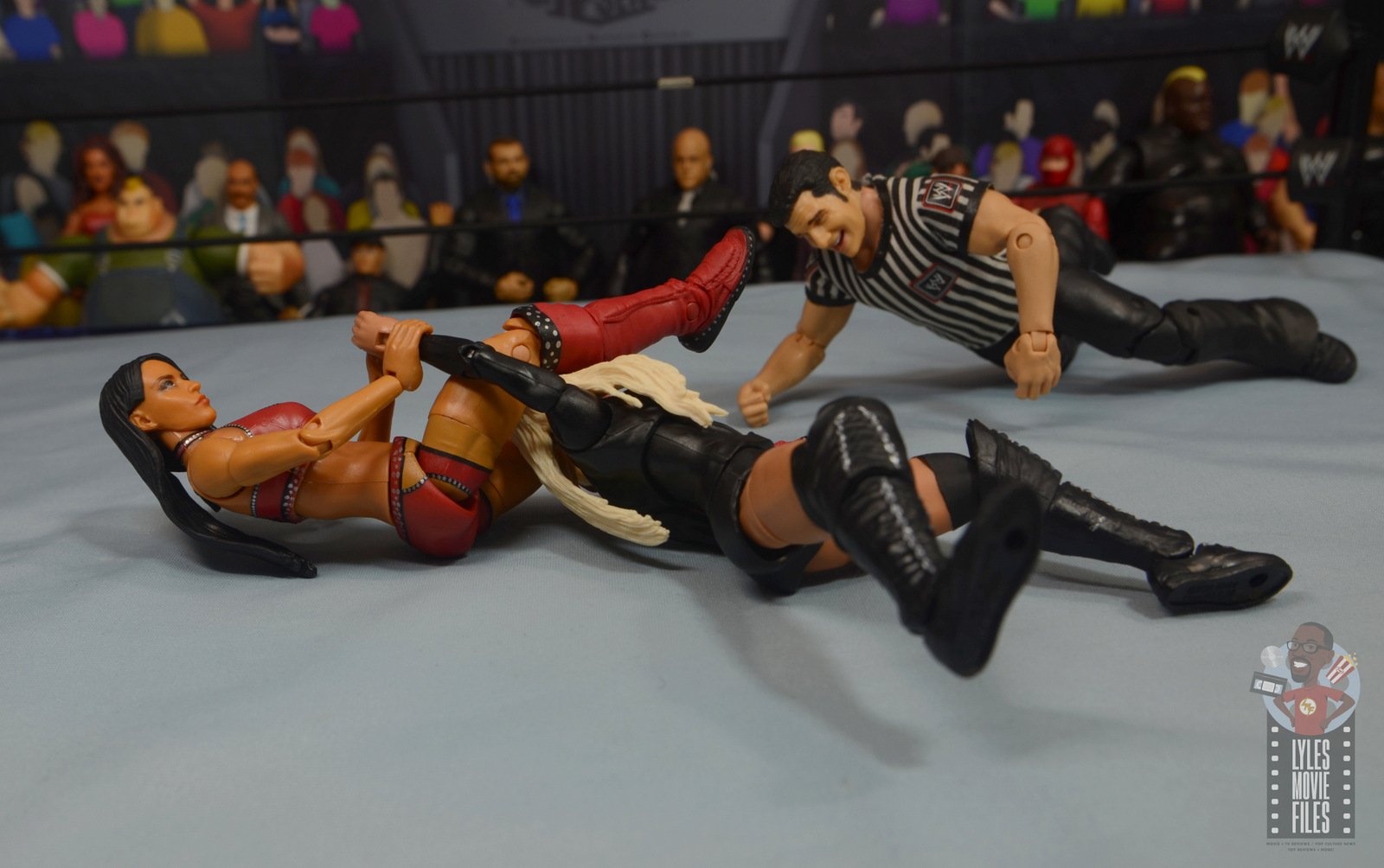 Accessories:  Zelina has a fairly elaborate set of accessories for a retail exclusive figure. 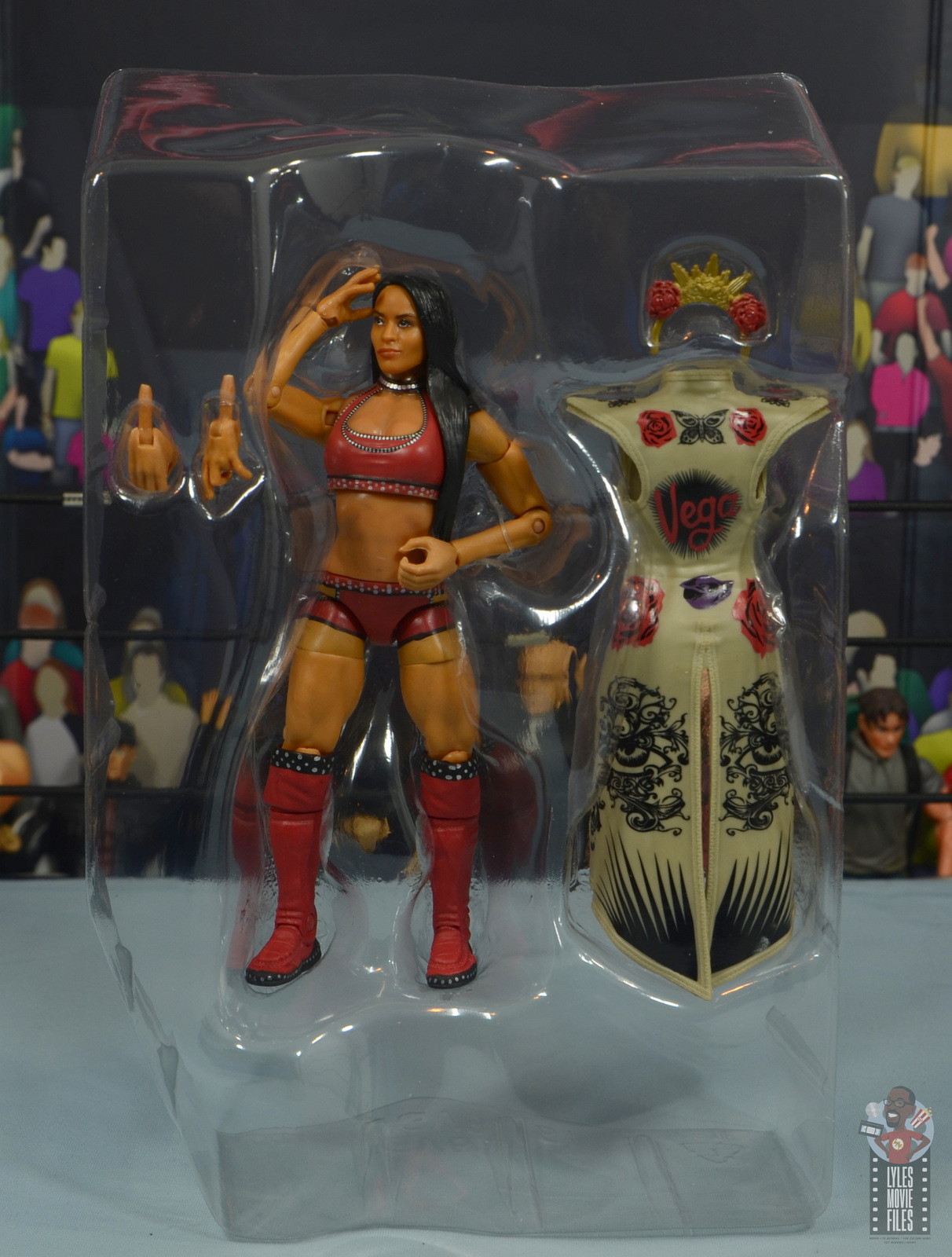 She’s got the alternate hands for her default set.

Her big item is her elaborate ring jacket. This has amazing detail with a very elaborate printing and tailoring sculpt. She also comes with her crown complete with roses on either end. This could use a dark wash since it’s not a flat gold, but the sculpt work is dead on.

Worth it?  I was able to Zelina for $20. That’s not always a given with these retail exclusive figures.

This is a pretty solid figure and really my only gripe is the articulation limitations, which feel very limited at this point. I’m also dinging the paint matching with the legs as well. Mattel knocked out Zelina and unless a new figure comes with the articulation updates, I won’t need another one. 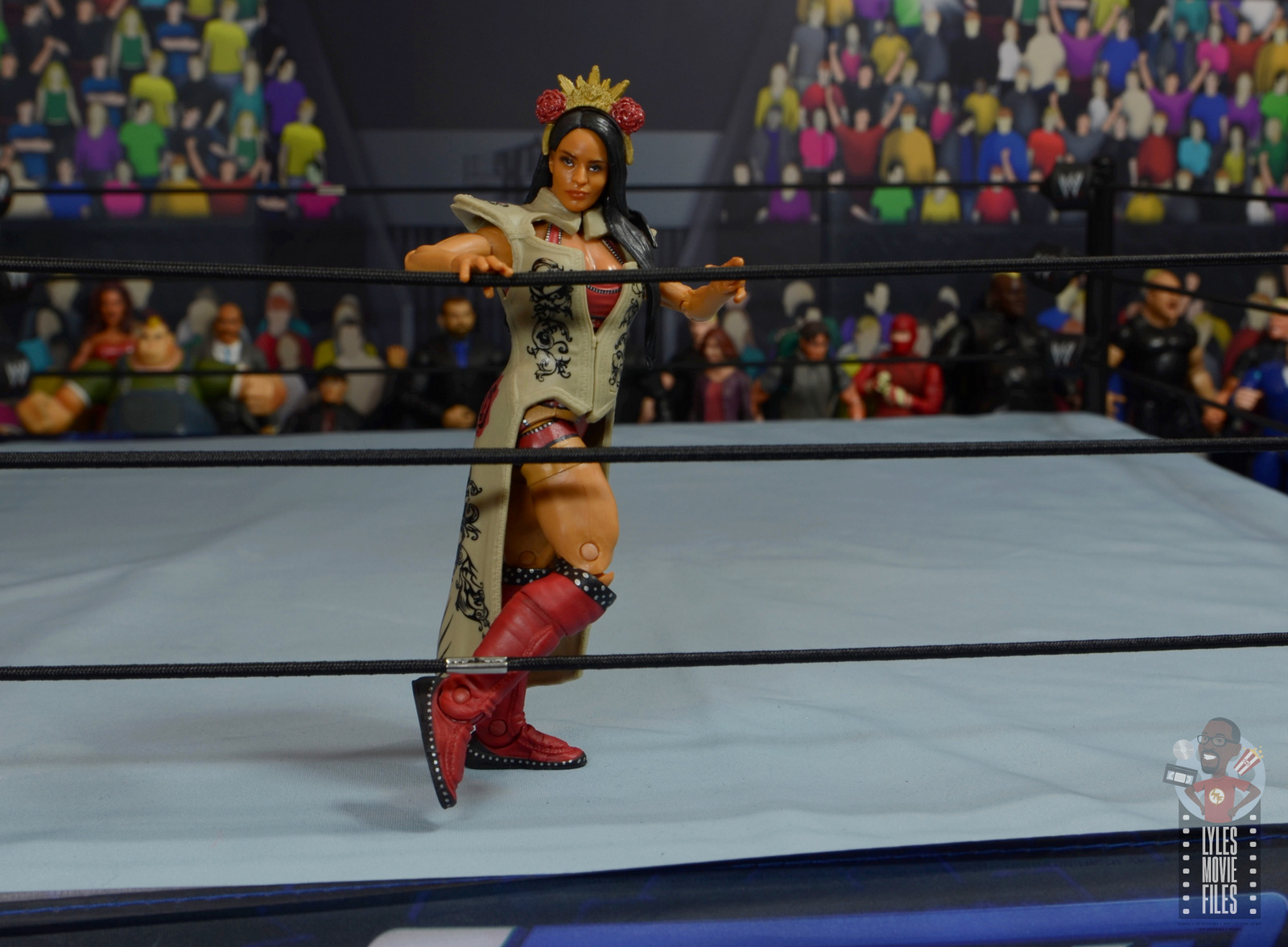 Where to get it?  Zelina is a Target exclusive figure so that’s your main route. I don’t see her available on the website so you’re gonna have to go in stores or wait until secondary sellers list her on Amazon.