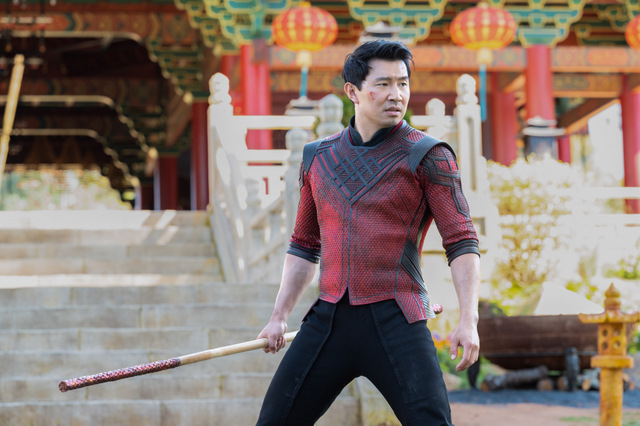 It’s always fascinating watching Marvel Studios tackle another genre. Captain America: The Winter Soldier was a paranoid 70s style spy thriller, Guardians of the Galaxy was the MCU spin on sci-fi sagas, Ant-Man was a heist film and Spider-Man: Homecoming was a vintage 80s teen comedy.

With Shang-Chi and the Legend of the Ten Rings, Marvel fully kicks the door in on the martial arts genre with another explosive audience pleasing effort.

There’s plenty of reasons to be excited about the film, the first superhero film with a predominantly Asian American/Asian cast. Marvel doesn’t have a plethora of viable Asian heroes to headline a film and Shang-Chi, a product of the 70s martial arts craze, needed a little adjustment from the source material to work in a modern cinematic setting.

Shang-Chi (Simu Liu) is living a pretty boring existence as a parking valet with his best friend Katy (Awkwafina). He’s content with his best boring life, barely registering signs for people needing counseling from The Blip. 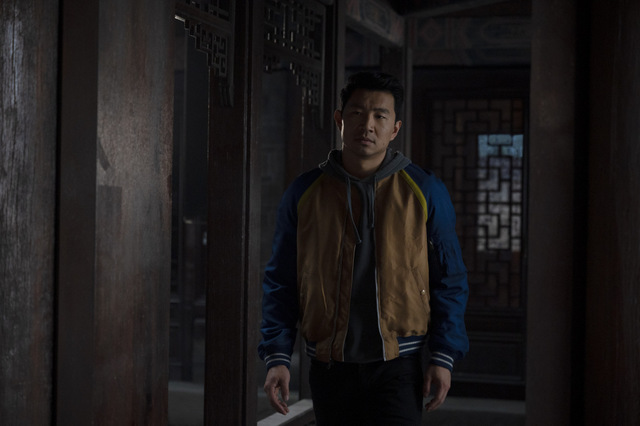 When he and Katy are attacked, Shang-Chi realizes the time for sitting back on the sidelines is over. It’s time to face his father, Wenwu (Tony Leung), who left a decade ago to avoid becoming part of the family assassin business.

Shang-Chi reunites with his sister, Xialing (Meng’er Zhang), who’s running an underground fight club with luminaries such as Wong (Benedict Wong, Raya and the Last Dragon). This was a nice crossover to have the Doctor Strange co-star pop up for a welcome cameo in a film featuring other Asian heroes.

Ten Rings almost rigidly follows the formula outlined by Black Panther. There’s the savant sister, a healthy appreciation and respect of the heritage and culture represented, an opening exploring the nurturing mother figure, a big bruising enemy turned ally, a reliance on advanced weaponry and the climactic battle with a relative. Following the path laid by Black Panther is hardly a bad choice. Black Panther is the 12th highest grossing and the biggest earning solo superhero film of all time. 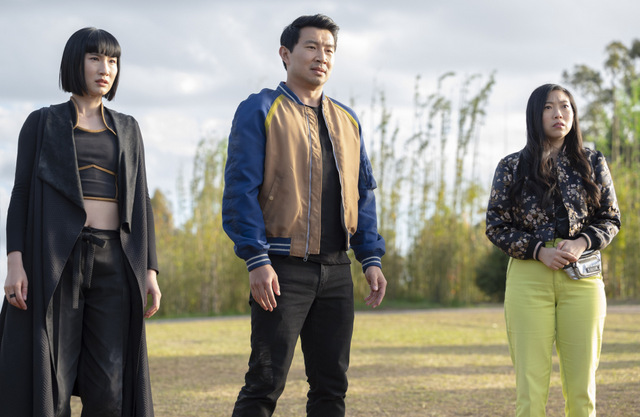 There’s just a few things that hold it back. Chadwick Boseman’s Black Panther was prominently featured in Captain America: Civil War. That helped build buzz for the character as well as establish T’Challa to an extent without a pesky origin story. When Black Panther arrived, it was an expansion of T’Challa’s world instead of a cold introduction to an entirely new branch of the Marvel Cinematic Universe.

With Ten Rings, Director/co-screenwriter Destin Daniel Cretton (Just Mercy) tries to split the difference by telling Shang-Chi’s origin while at the same time expanding and rolling out his large ensemble. This most directly affects Liu, who both figuratively and literally has to take a back seat to other cast members. It’s possible that viewers who came into Ten Rings not knowing a whole lot about Shang-Chi aren’t going to feel like they know much more after seeing the film.

Again, Black Panther had the benefit of being this cool, authoritative hero standing shoulder to shoulder with Captain America and Iron Man. The next time he’s trading jokes with Shuri and trying to never freeze in front of Nakia. It’s a subtle difference in how the hero is portrayed with that first impression and Ten Rings too often makes Shang-Chi a major player in an ensemble instead of the headliner.

Liu acquits himself well in the lead role giving Shang-Chi a welcome balance of confidence and doubt of his new path. Like Benedict Cumberbatch’s Doctor Strange, Liu is probably going to be a lot more fun to watch playing against other Marvel heroes instead of his realm of the MCU. 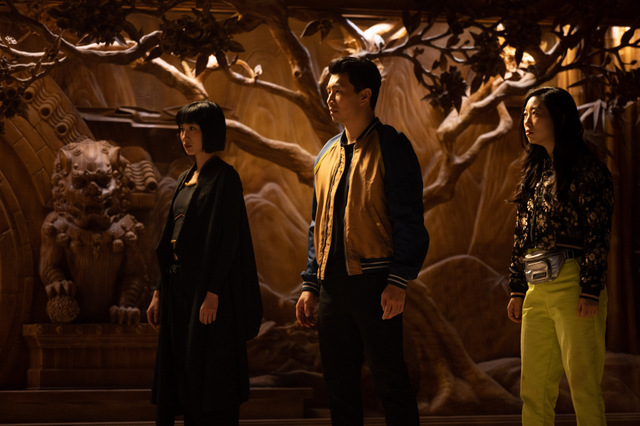 Awkwafina plays just about every Awkwafina character from every other movie for the first half. It leads to this weird dynamic that kind of felt like Richard Pryor in Superman III. It works, but mostly feels out of place.

Midway through, the writers and Awkwafina realize Katy can just be a regular character instead of the comic relief and Katy becomes much more endearing. Interestingly, the friendship endures through the film. There’s no obligatory rush to make Shang-Chi and Katy a couple. Still, they’re totally giving major couple vibes. Unfortunately another character picks up the comic baton resulting in far more annoying and unnecessary jokes that feel forced.

In the comics, The Mandarin’s 10 rings grant him special abilities with each ring serving a unique purpose like flame projecting, matter disintegration and freeze blasts. For the film, the rings are basically energy projectiles that work like a whip. That’s a less interesting approach and despite a second crack at the character, Marvel Studios still never quite managed to do justice to Iron Man’s arch-enemy, The Mandarin.

Wenwu is an interesting antagonist as the screenwriters take a telling instead of showing us that he’s this evil bad guy approach. Not that Wenwu needs to be an all-time classic villain, but the best MCU bad guys tend to do something villainous that matters on screen.

Whether that’s Loki killing Coulson, Thanos killing Loki, Ultron killing Quicksilver or Zemo killing T’Challa’s father, there’s no inferring as it’s very clear their status by the time for the showdown with the heroes.

That’s not the case with Wenwu and it almost feels like the writers tried too hard to provide a rationale reason for his vaguely described villainous actions. It takes away some of the impact with his confrontation with Shang-Chi as he has an understandable motive. Leung is also a little too cool to dislike. 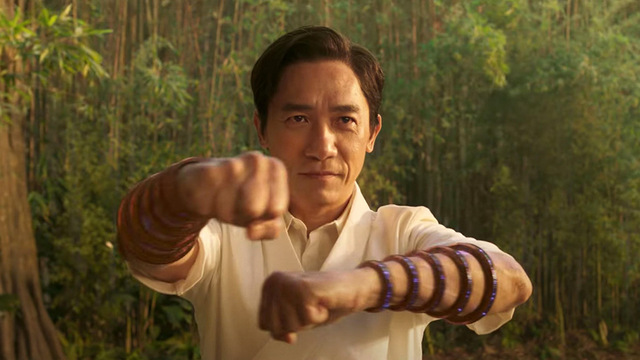 Wenwu has some formidable looking henchman in Razor Fist (Florian Munteanu, Creed II) and Death Dealer (Andy Le). Death Dealer has an amazing costume and is featured in a terrific scene, but is much more of a Captain Phasma character.

Shang-Chi has some breathtaking action scenes with stellar fight choreography that takes full advantage of the Marvel Studios blockbuster presentation. Cretton keeps the first half battles “simple” with standard fast-paced, intricate master level martial art encounters. It’s the locations that give them that larger than life comic book feel.

One plays out on a San Francisco bus while another against the dramatic backdrop of neon building signs. Maybe the most impressive takes place along various levels of a skyscraper scaffolding in a sequence that feels like trapeze artists pulling off daring martial arts without a net.

The film takes a magical tone with more fantasy elements as Shang-Chi and crew meet Ying Nan (Michelle Yeoh), one of the defenders of the magical city. Yeoh rarely takes a back seat in any scene as she has such a commanding presence. It would have been nice to have more scenes with Leung and Yeoh.

Cretton impressively navigates the big climactic battle with some elements that would have been even more spectacular if they weren’t revealed in the trailer. The fantasy elements were needed to make Shang-Chi more than a standard martial arts film in the Marvel Cinematic Universe. Cretton understands how to make it properly extravagant for the big screen without feeling too overwhelming.

As usual, stay for the mid-credits and post-credit scenes to get the full picture of what’s in store for Shang-Chi and his place in the Marvel Cinematic Universe.

Shang-Chi and the Legend of the Ten Rings ushers in the next age of heroes for Marvel Studios and proves its in good hands (and feet).

Check out the Marvel Legends Shang-Chi figure on Amazon.