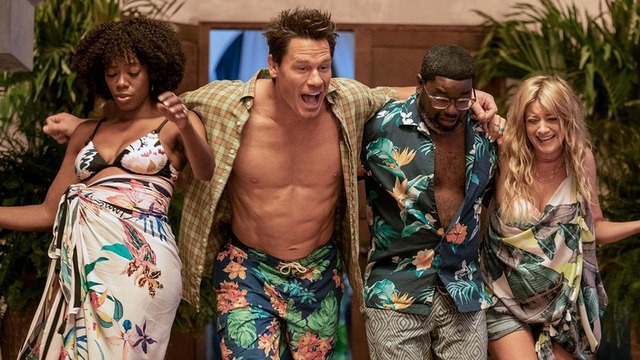 For those who’ve experienced it, making vacation friends is an amazing experience. Vacation Friends takes that concept to a more ridiculous extreme that proves almost as much fun as the real thing.

Marcus (Lil Rel Howery, Free Guy) has big plans for his vacation getaway with his girlfriend, Emily (Yvonne Orji, Night School). After years of dating and very elaborate planning, Marcus plans to wrap things up with a proposal.

Those plans almost immediately get ruined, but fellow vacationers Ron (John Cena, F9: The Fast Saga) and Kyla (Meredith Hagner, Search Party) insist Marcus and Emily share their presidential suite. Although every red flag Marcus can find is raising, Emily’s up for cutting loose and having a memorable getaway. Over the next seven days the foursome is inseparable as they get into some high level shenanigans.

They’re some pretty inspired scenes including a fun gag where Ron pokes fun at a wrestling match. Cena isn’t at his wrestling to movie superstar predecessor Dwayne Johnson’s level yet, but he’s starting to carve out a strong and versatile film resume. This is one of his best performances thanks to his commitment to going all in with Ron’s energetic personality.

When it’s time to head back home, Marcus and Emily are content to get back to their normal lives and likely never see Ron and Kyla again. That’s how it goes with vacation friends. You have a blast with strangers, share some laughs, maybe some drinks and crazy situations and that’s it.

Ron and Kyla don’t get the message and show up seven months later for Marcus and Emily’s wedding weekend.

Naturally, Marcus and Emily want nothing to do with the wedding crashers, but their infectious personalities quickly win over Emily’s stuffy father, (Robert Wisdom) and mother (Lynn Whitfield), who insists they stay. Emily’s brother, Gabe (Andrew Bachelor, Love, Weddings and Other Disasters), isn’t a fan of Marcus and doesn’t take kindly to Ron either.

The script, credited to five screenwriters including Director Clay Tarver, successfully starts out like The Hangover before transitioning to Wedding Crashers. That’s an impressive comedic stint to pull off. It did feel like Tarver rushed through some parts of the blackout drunk vacation portion.

It was nice that the screenwriters didn’t take the long hanging fruit of race jokes. Those are too likely to offend these days and Vacation Friends was somewhat aspirational in its approach to race relations.

Easily the most refreshing aspect of the film is Ron and Kyla are earnestly good people. They don’t have any angle or scam and are just excited to have fun with another couple.

Howery and Oriji already played a couple on Insecure so they have no trouble setting into a couple mode. Cena and Hagner have solid, believable chemistry and also play off each other well.

Due to his height and delivery, it’s going to be hard for Howery to completely avoid Kevin Hart comparisons. There’s enough roles out there for both Howery and Hart to thrive in this style of comedy that calls for a shorter guy to occasionally spazz out in crazy situations.

Hagner gives a young Anna Farris vibe with a sweet and enthusiastic performance. Ironically, Farris was at one point attached to the film. It’s very easy to envision her in the role of Kyla. 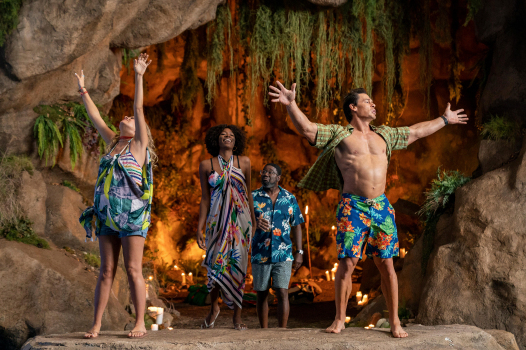 At nearly two hours, the film does start to feel like it’s running out of steam with about 20 minutes to go. Some of the curtain of the film’s smaller budget gets pulled back in scenes with some lesser quality greenscreen stand in for some of the more exotic locales. A sequence where Marcus starts hallucinating plays out a bit too long.

Fortunately, when the film starts to lose its way, Howery, Oriji, Cena and Hagner are able to get it back on track with a funny exchange or some unexpected physical comedy.

Vacation Friends is a definitely a pleasant enough destination for those seeking a fun and good-natured wild comedy.

Get the first season of Insecure on Amazon.