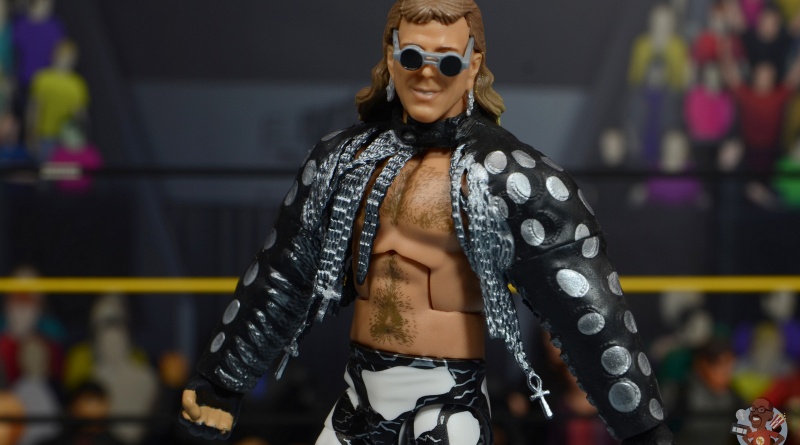 Shawn Michaels would eventually become known as Mr. WrestleMania, but his path to that distinction had an ordinary start. Mattel celebrates those humble beginnings with its latest Heartbreak Kid figure based off his WrestleMania 9 match against Tatanka.

The cool thing about this figure is it fills in a gap in the HBK Mania collection as Mattel has previously delivered the WrestleMania 8, 10, 12 attires. Time to put Mania 11 on the short list. For now let’s take a look at this one and start adding Luna to our list of requested figures.

Packaging: I really liked this year’s Wrestlemania packaging with the blue and gold gradients.  The rendering of Shawn looks better than some of the questionable Photoshop efforts done with other figures. 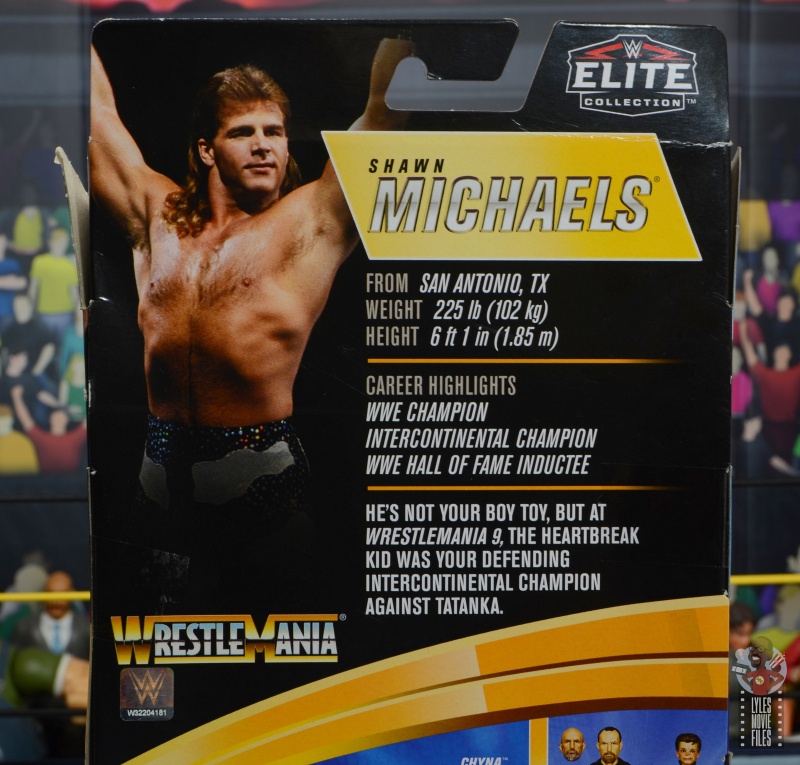 It’s also a nice touch to have the actual reference photo from the event. Robert Rudman always manages to do a lot with a short amount of space in writing fun bios.

Likeness:  The cocky Boy Toy phase of HBK has led to some of Mattel’s strongest head sculpts for Michaels. It captures the dismissive and vain mindset of HBK well. 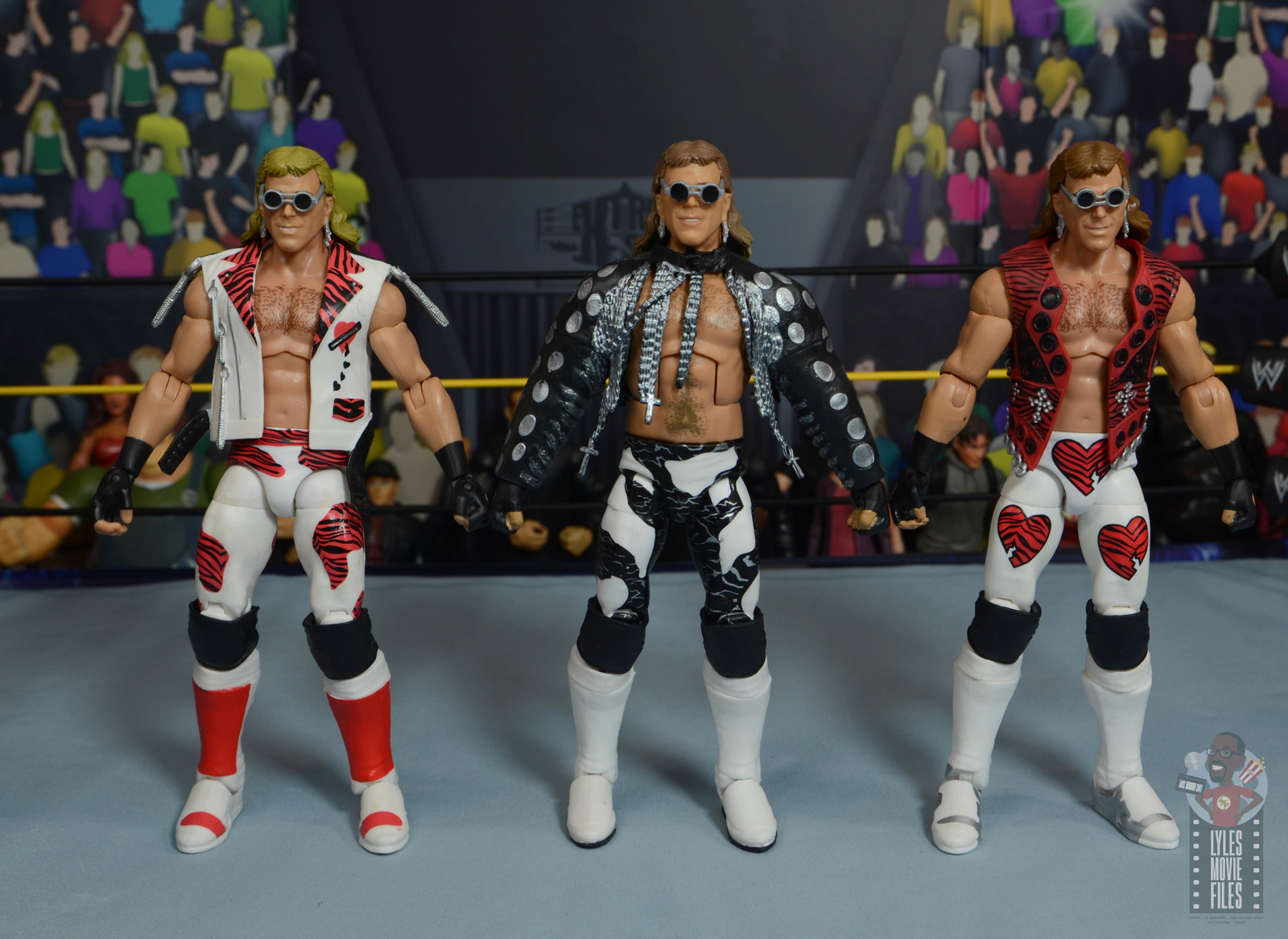 I always think the hair could be a tad higher at the top and flow along the sides a bit more naturally. The latter is more of a function for the articulation though so I’m fine with that compromise.

One nagging remaining issue is the holes in the hairs culpt for the sunglasses. This is where Mattel probably just needs to start making a secondary head sculpt with the sunglasses permanently attached. 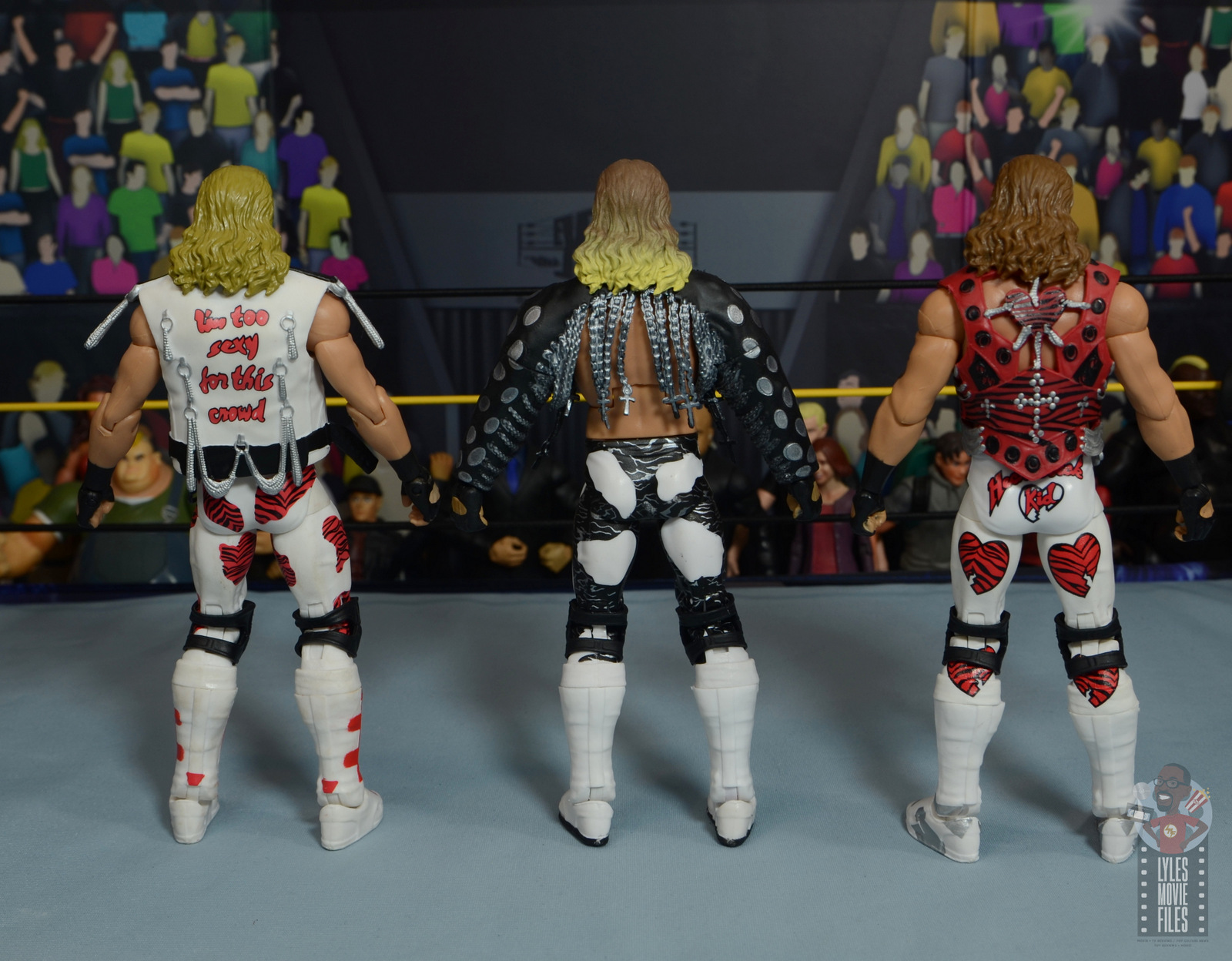 There’s some figures Mattel never really seems to have the ideal part combinations to create the best physique likeness. That’s not the case with Michaels as the slender torso, arms and legs is an ideal pairing. 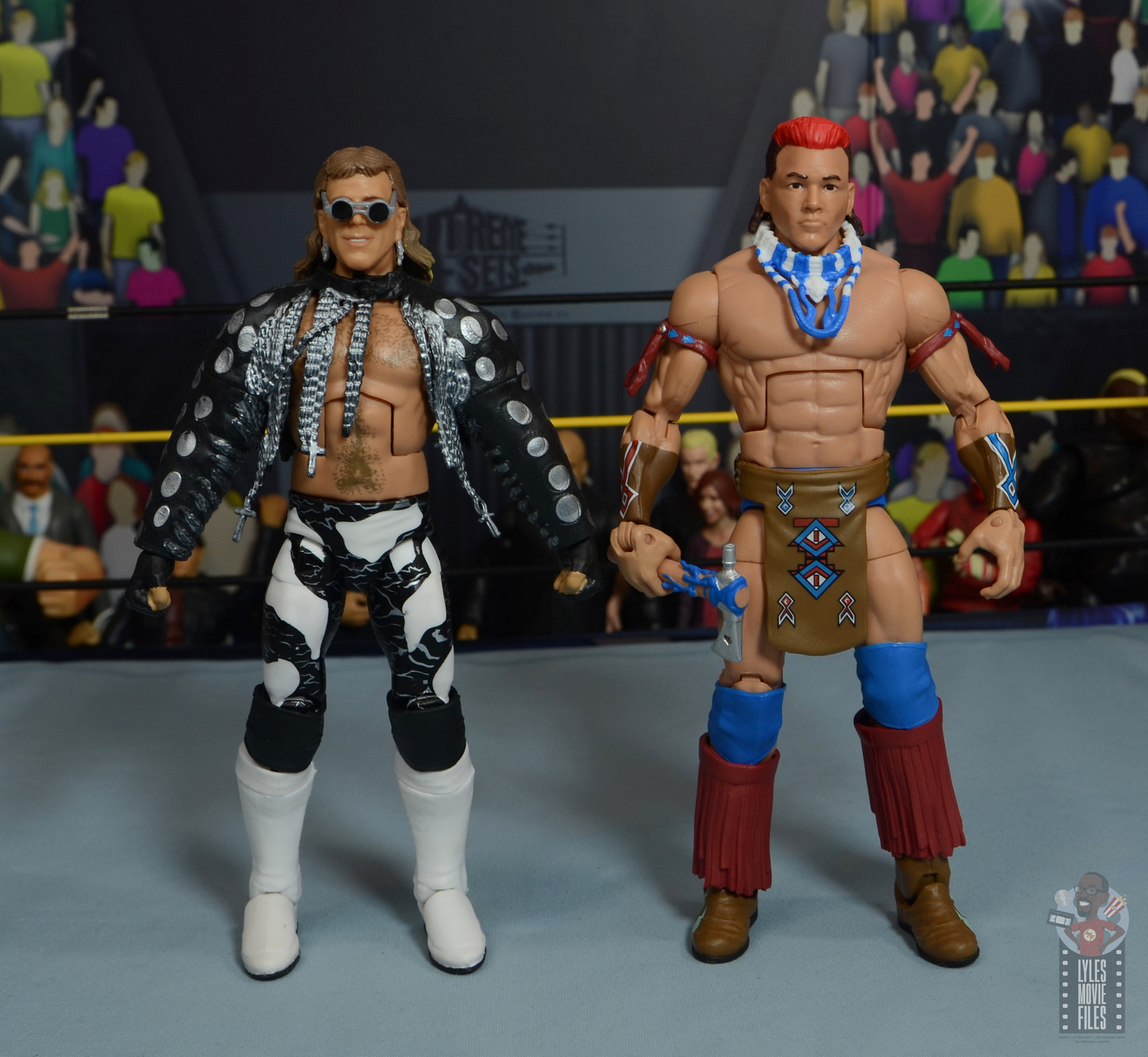 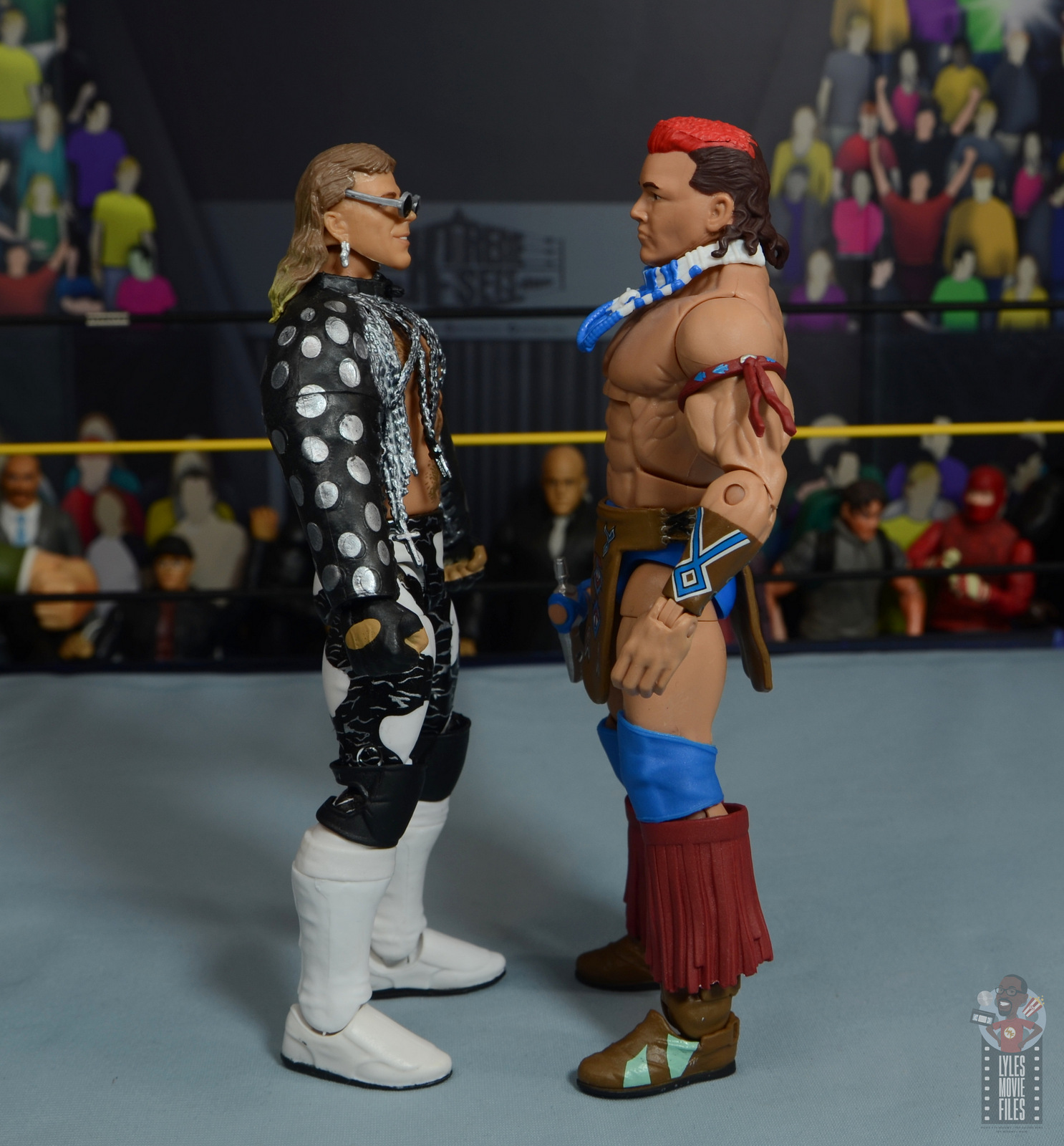 Paint:  Looking at Shawn’s early solo attires it’s kinda funny that it took so long to get the heart-break logo in place. For now, Shawn is still rocking the random splotches attire.

The difference with this attire is there’s some lightning like effects throughout. Mattel isn’t known for crappy paintwork with this line so it’s more shocking when a figure has a bad paint job.

I’m not so sure the two-tone hair works as well as intended though I appreciate Mattel trying to add some shading into the hair paint work. The skin tone holes in the gloves don’t quite match up. 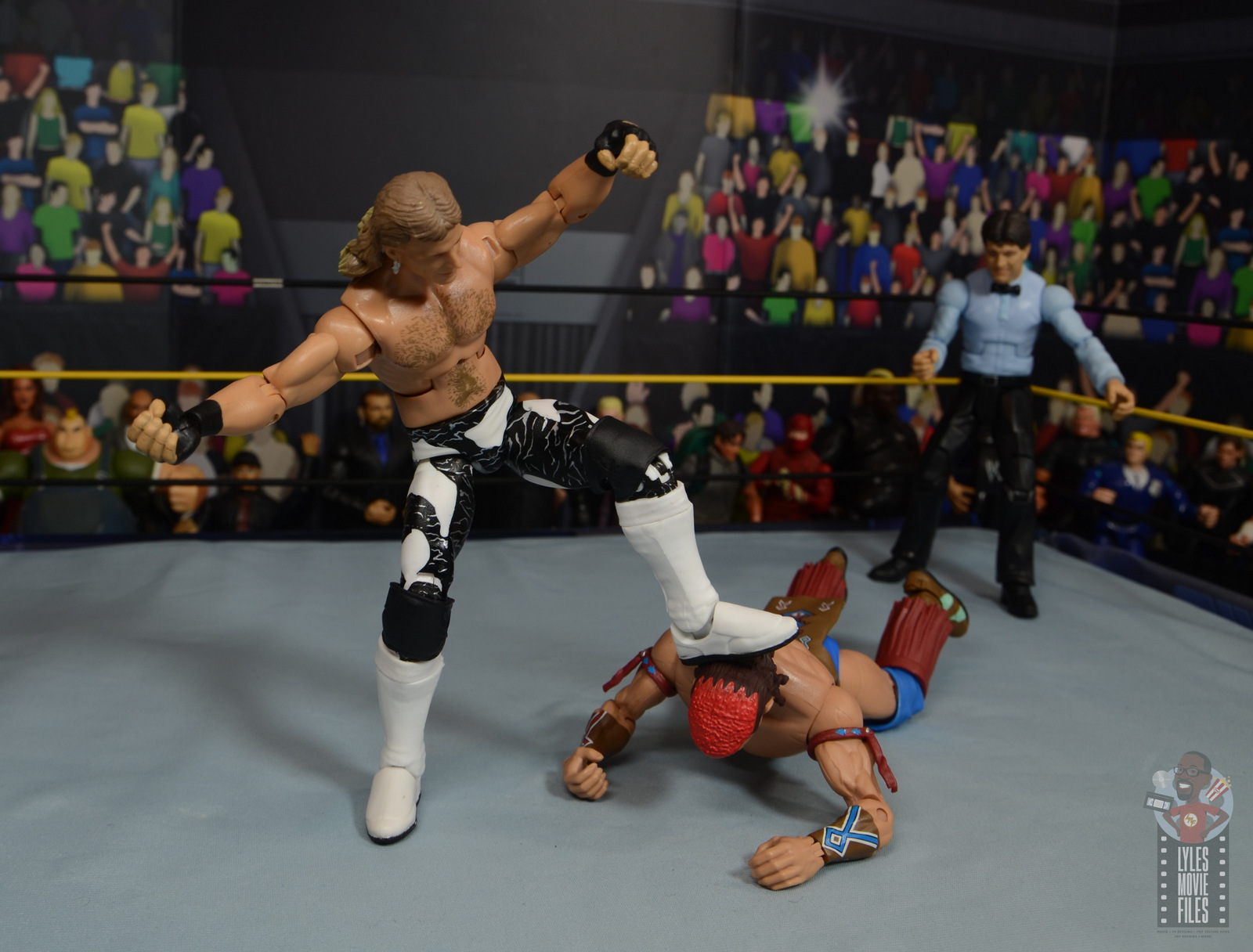 Articulation:  You know the deal with Elite figures by this point. 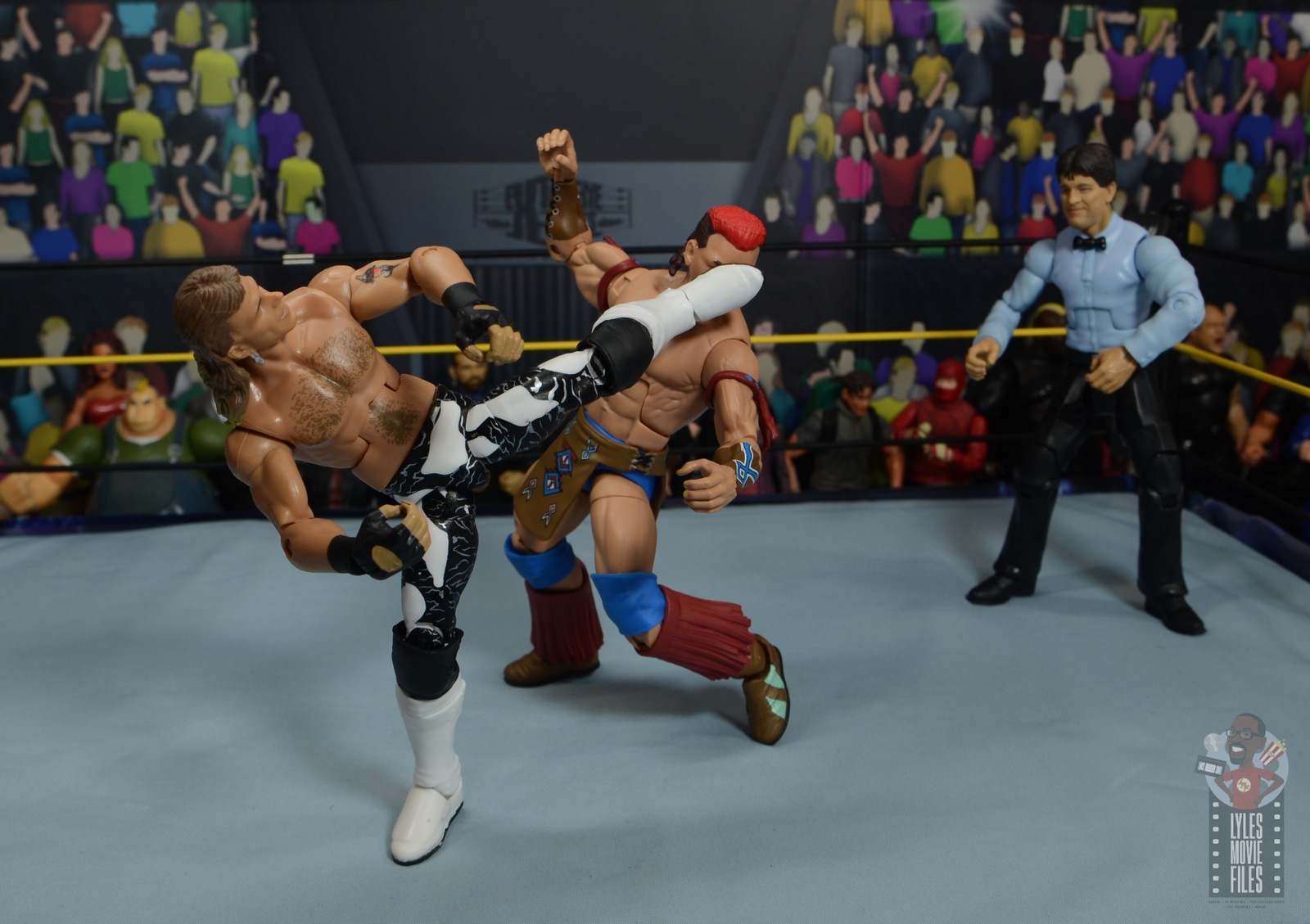 Shawn is probably one of those guys that should just be transitioned into the Ultimate Edition line permanently. I’d happily pay extra to get Shawn figures with the added articulation and display options. 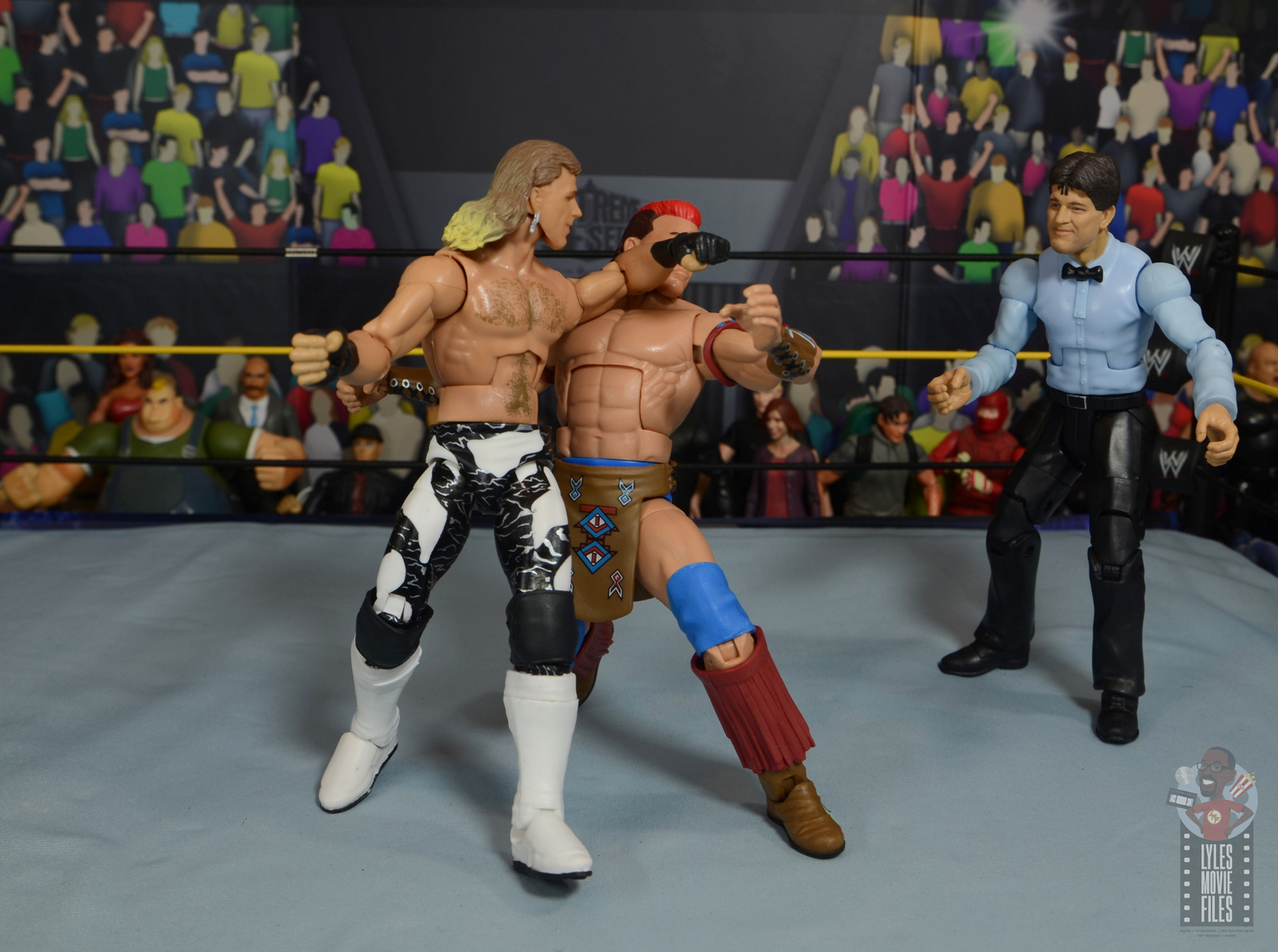 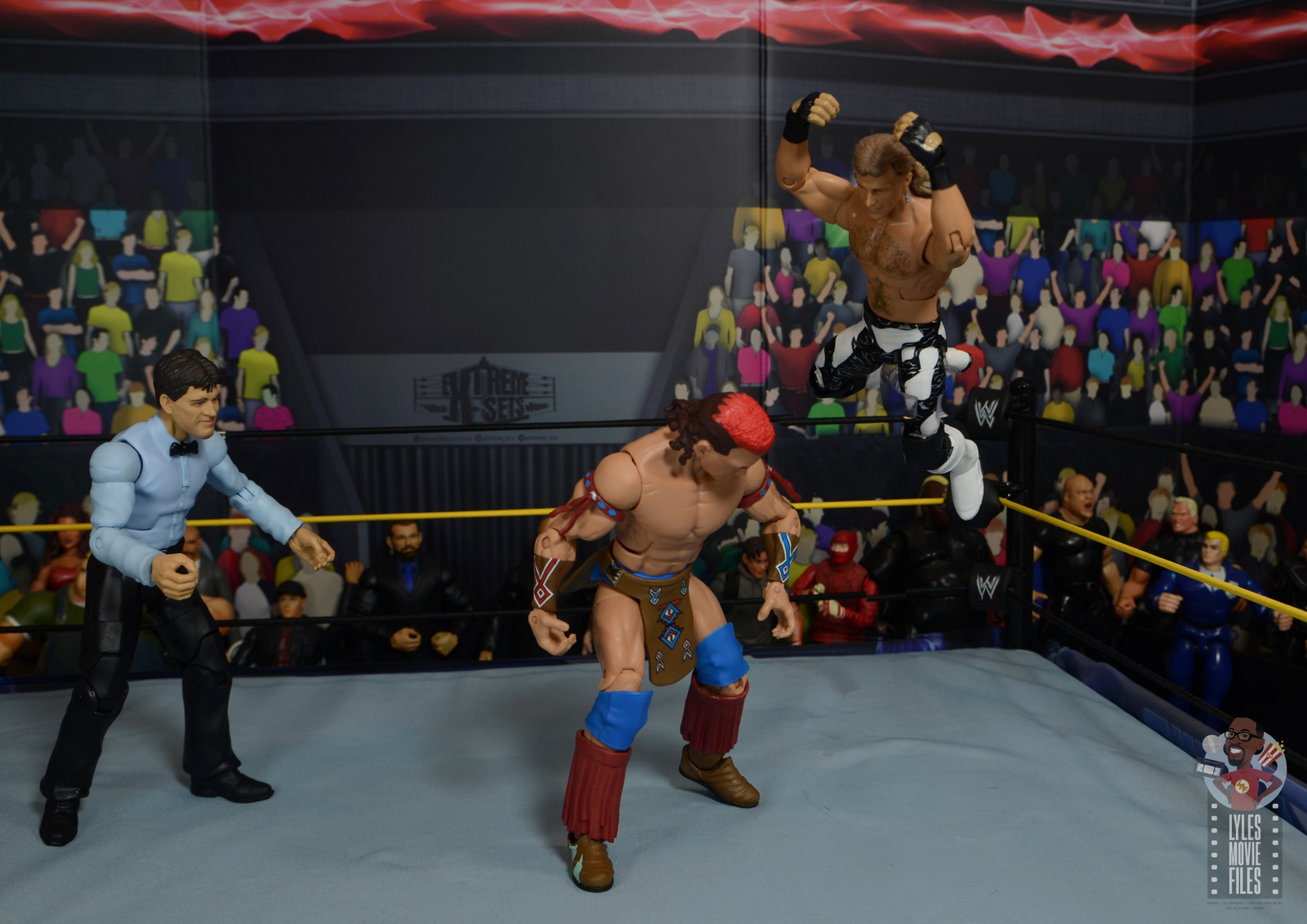 The standard Elite articulation isn’t bad and you can really pull off most of Shawn’s moves without any issue. 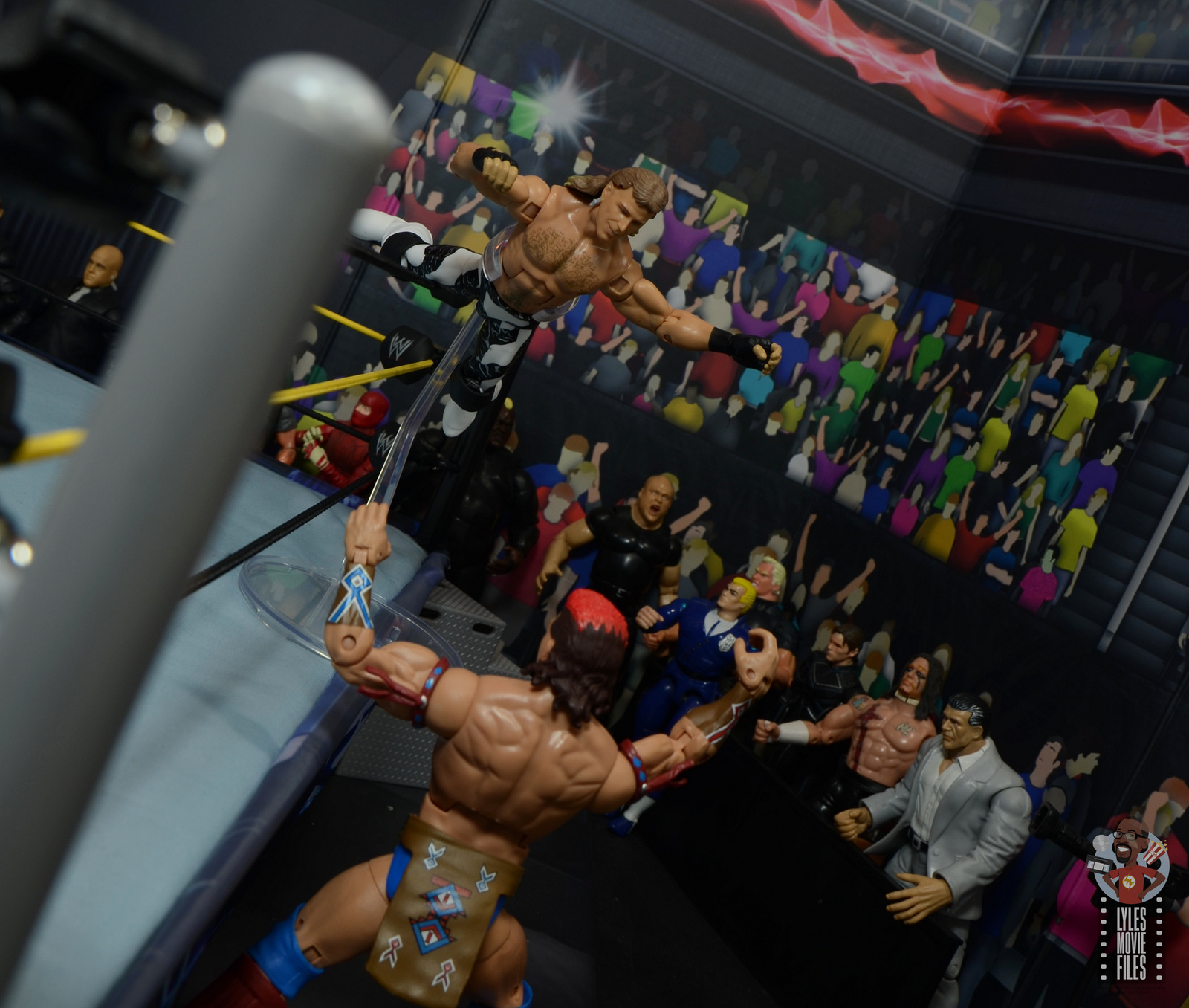 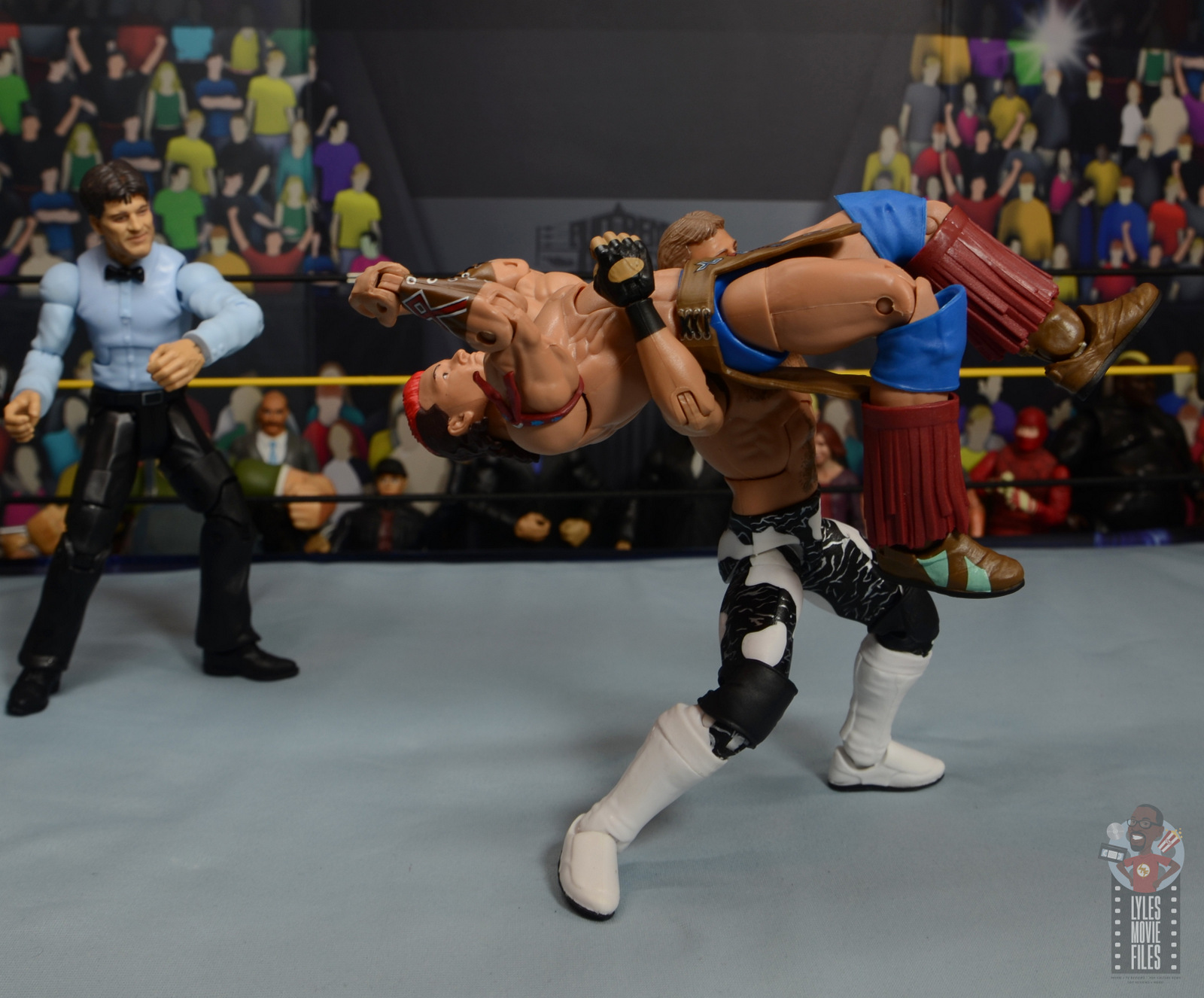 Accessories:  Michaels’ entrance gear was very complicated with tiny chains hanging from the sleeves, shoulders and collar. It was really the beginning of Shawn’s more intricate ring gear. 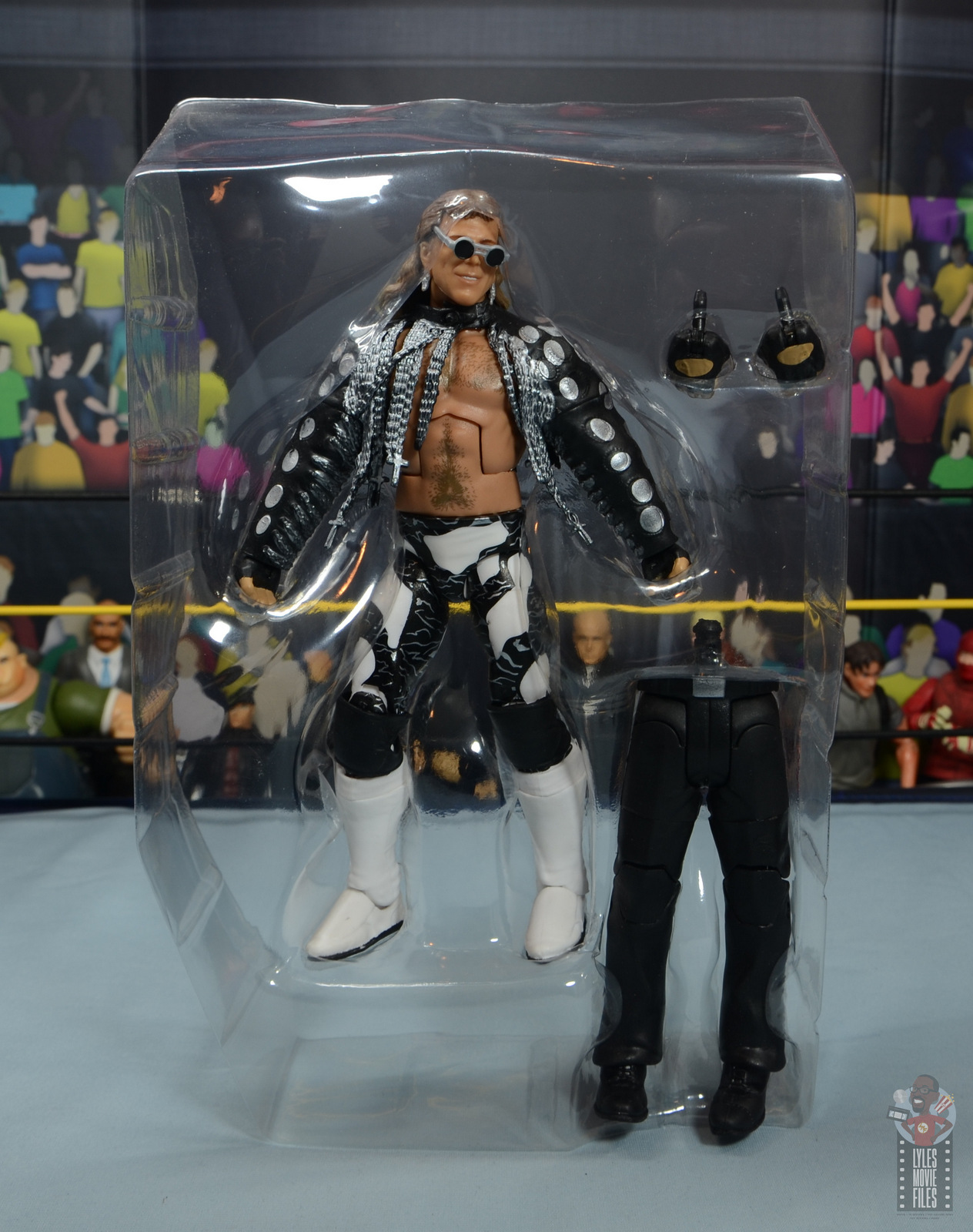 Mattel did a pretty good job of replicating it — as safety guidelines would prevent making the small chains hang as accurately as possible. The paintwork on the sleeves is pretty solid although their shell-like nature prevents actually pulling off the signature HBK pose with it on.

I wish Mattel could work in the chaps in the budget to complete the full entrance gear look. He does have his have removable sunglasses. The earrings are not removable though, which is kind of odd. I’m not sure if it’s better to just not include them or have them to complete the look.

At WM9, Shawn was the Intercontinental champion. The belt wasn’t included and it would have been nice to get the white IC strap here. He does have a set of swappable fists.

Finally, he comes with the legs for the Build-A-Figure Paul Ellering.

Worth it?  I grabbed Shawn Michaels for a little under $20. That’s the base price for the line and I’m glad Mattel stopped tacking on a few extra dollars for BAF figures. 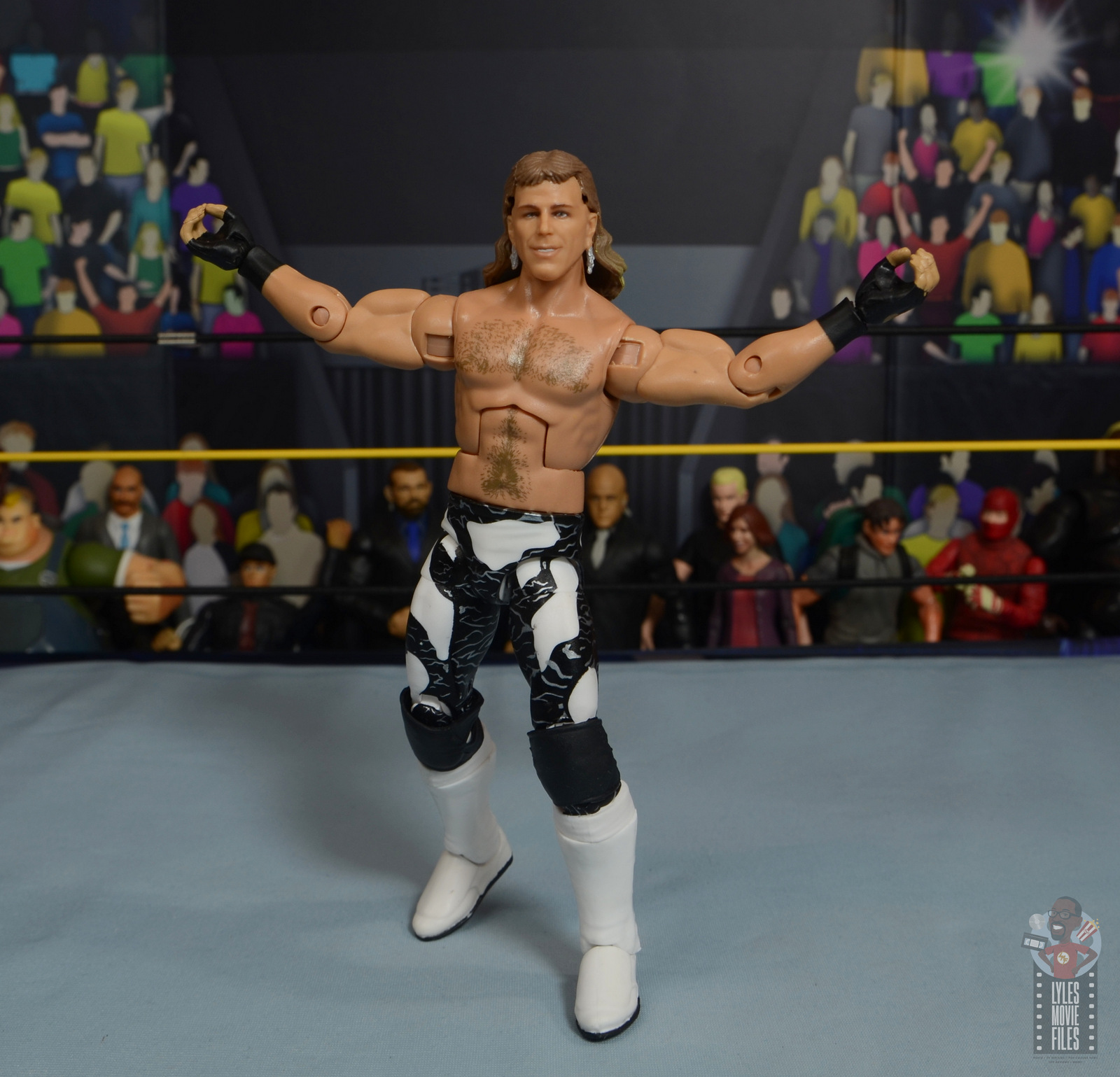 Where to get it?  Mattel stocked this wave pretty well at both Targets and Walmarts. Shawn seems to be the quickest of the set to go off the pegs. He’s the one that’s commanding big dollars on the secondary market as well including on Amazon.