All it takes is one bad decision. And sometimes the fate of a universe is spared from one arrogant doctor losing his hands instead of his heart.

In this emotional installment, The Watcher observes a world where Stephen Strange (Benedict Cumberbatch) isn’t alone when he has his fateful accident. Strange’s arrogance hasn’t pushed aside his one true love, Christine (Rachel McAdams), and she’s with him when he careens off the road. In “our” reality, Strange’s hands were mangled beyond repair and he traveled to seek The Ancient One (Tilda Swinton) in hopes of restoring them.

Ultimately that journey led him to becoming The Sorcerer Supreme, who staved off the threat of Dormammu and proved invaluable in eventually overcoming Thanos’ army. Christine’s death leads Strange to the Ancient One. He stops Dormammu, but is still haunted by the loss of his love. Christine was Strange’s spark. His joy. The one person who could get him to disarm and drop his walls. This loss was still just as raw and painful as the day he saw her limp body next to him in the wrecked car.

But maybe there was a way to save her? It wasn’t at the Sanctum or Kamar-Taj, but another realm that had long held secrets. Powerful enough secrets that could save the woman he loved.

Strange probably should have popped over to a dimension where he could have had a chat with a melting Anakin Skywalker along the ashes of Mustafar. Anakin could have told him all about the true cost in preventing someone from dying.

While he could easily turn time back to that fateful night, regardless of his choices, somehow Christine kept getting killed over and over again.

Undeterred by his constant failures and the unbelievably tragic means of Christine’s death, Strange kept searching for a way to save her. The numerous ways Christine kept getting killed reminded me of Booster Gold:52 Pickup where Booster kept trying to prevent The Joker from shooting Batgirl.

Finally, The Ancient One resurfaced in her astral form to tell Strange her death was a focal point that could not be changed without…unlimited power. Well, it’s safe to say it’s not possible to learn this power from a Jedi.

This fits in perfectly with Strange. His arrogance in the standard reality forced everyone away from him before his accident. Broken physically and mentally when he went to The Ancient One, he should show Christine how he changed for the better. As the trailer for Spider-Man: No Way Home suggests, Strange still gets overly confident about his abilities and without some checks, he could pose the gravest threat to the MCU.

Strange starts summoning various creatures from other realms to leech their power. This seemed like a perfect opportunity to throw in some more MCU cameos, but they were just random creatures. Except for The Watcher, who’s presence Strange nearly detects.

The Ancient One drops by for one more mind screw telling Stephen about his other half — the darker divergent path when he started going down this road. While this Stephen Strange heeded Wong’s (Benedict Wong) advice and stopped trying to save Christine, the other became an energy vampire supreme. And now it was time for them to meet.

Cumberbatch did an outstanding job of conveying the broken and twisted version of his usual portrayal of Strange. It was a major coup for Marvel Studios to get an actor of his quality for what should be a huge character going forward in the MCU. And how cool was it to have all of the principal actors from Doctor Strange (save Chiwetel Ejiofor with the absence of Mordo) back to voice their characters this episode?

While the series’ animation has always looked amazing, the addition of the magical effects (and cape fight) made it look even more dazzling. It was pretty cool watching the Sorcerer Supreme break down Wong’s spell of protection of Doctor Strange. 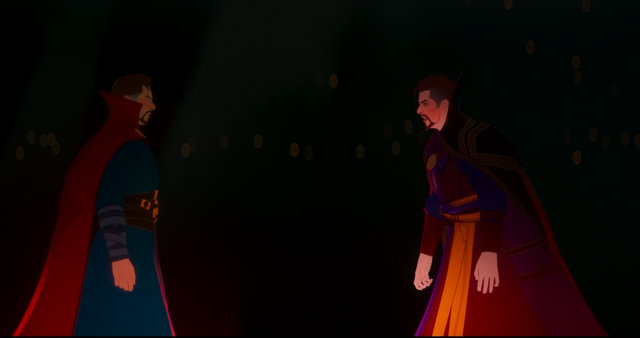 In this instance, the heroic, noble Dr. Strange loses the encounter to his darker half and he does succeed in accomplishing his goal of restoring Christine. But like everyone warned him, it wasn’t without a cost. The world is coming undone. The Sorcerer Supreme pleads with The Watcher to spare his world, but The Watcher pulls his “I’m just a casual observer card” and watches Strange’s world die.

This was an amazing episode that showed the full potentially world destroying power in Stephen Strange’s hands. Doctor Strange hasn’t been in the MCU as long as mainstays like Thor and Hulk, but he’s already had some excellent moments in both the big and now small screen. And What If…? continues to take big risks with some very satisfying results.

Pre-order the Marvel Legends What If… Sorcerer Supreme figure on Amazon.