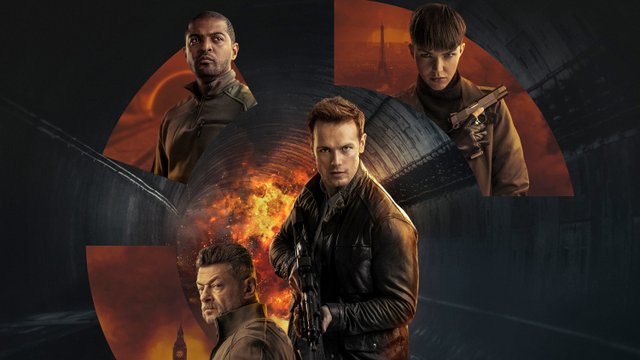 SAS: Red Notice (or SAS: Rise of the Black Swan for you Netflix viewers) is a film that gets progressively worse as it continues to play out. With a two hour run time, the quality keeps finding new bottoms to drop. This is a classic case of diminishing returns that could have stopped the bleeding if its run time was shorter.

Black Swan’s leader Grace (Ruby Rose) figured letting the women and children survive would spread the right kind of message of fear and intimidation. Apparently she forgot everyone has a cell phone with video recording capabilities now. While failing to capture Grace, Sam does deal the Black Swans a crippling blow by seizing their headquarters.

Director Magnus Martens (Agents of SHIELD) kicks things off with two well laid out shootout sequences. The first shows Black Swan’s ruthlessness while the other shows how effective Tom can be even while using non-lethal tactics. Heughan has the slick moves and brawny way with a gun to suggest he might be using SAS as his audition reel for the next 007 gig. He’s certainly got the jawline and detached faraway stare for it. 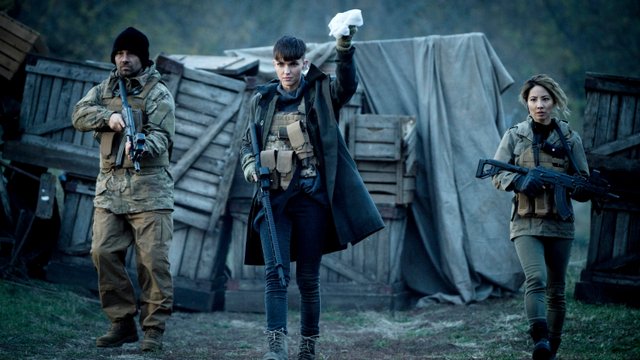 With that mission complete it’s time for a little R&R for a trip to Paris. Sam plans to propose to his doctor girlfriend, Sophie (Hannah John-Kamen, Ant-Man and The Wasp), even if they have a little disconnect on his job. Tom isn’t a superhero and Sophie knows what he does for a living although she can’t understand his detached sensibilities about killing people. That discussion will have to wait.

How’s this for convenient? What were the odds that the train Sam and Sophie take is the same one Grace and her crew are planning to hijack and shut down in the middle of a tunnel? Fortunately, Sam is in constant contact with his supervisor (Noel Clarke, Star Trek Into Darkness) and best friend and fellow agent, Declan (Tom Hopper, Game of Thrones), thanks to his trusty cell phone. In a tunnel? Now we’re stretching into absurd territory even for an action film.

This felt like the crossroads moment of the film for screenwriter Laurence Malkin (adapting Andy McNab’s Red Notice novel). One path takes the standard trained operative slowly winnowing a plane/train/bus/boat full of invaders as a one-man wrecking crew. Another is going a far more realistic route where Tom isn’t a superhero and his actions are well within reason. Both eventually end up at the same ridiculous destination with an improbable conclusion, but one is a far more entertaining journey.

Sam doesn’t know Black Swan was operating under orders of the Prime Minister (Ray Panthaki) and his military counsel, Clements (Andy Serkis, Black Panther). Desperate to cover their tracks before Grace exposes their role, the PM and Clements want her taken out at all costs. Not only does Sam have to navigate Grace and her crew, but the compromised leadership of Clements who doesn’t care about the innocent lives on the train.

Rose has zeroed in on one pitch and one deadpan style of dialogue delivery. It’s worked for Mark Wahlberg all this time so as long as the roles keep rolling in, why switch it up? Rose comes off too flat to make for a charismatic protagonist. Like her role in John Wick: Chapter Two, she’s in her wheelhouse playing the slightly unhinged villain.

Grace tries to paint herself as some necessary radical revolutionary. Her actions don’t properly match up though since she’s a psychotic killing random people for no reason. It feels like Malkin could have adjusted the novel to send Grace over the edge after her father’s (Tom Wilkinson) death. That could have explained her snapping and her sense of black and white going grey and red. That would have made her need for payback on the Prime Minister and Clements more meaningful as well as making her more dangerous.

24 fans probably won’t be shocked to learn that even the British version of CTU has a traitor. Martens gets a little too cute in trying to set up a twist and ruins the surprise with his attempt to not make it so obvious.

Too often Heughan is left twiddling his thumbs for long stretches while Tom oh so patiently takes his time on this rescue operation/taking out the Black Swan operatives. It really is more realistic for Tom to wait until the bad guys split up so he can fight them one on one. 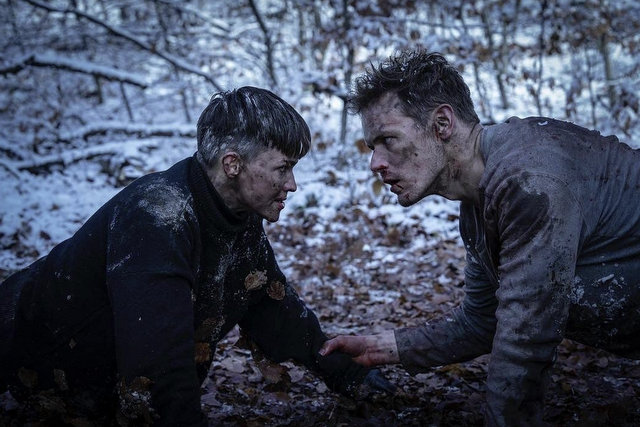 Still, it’s hard not to watch this and think that John Wick could have wrapped everything up in 20 minutes tops — especially if his wife was being held hostage. John-Kamen gets a bit more to do than the typical kidnapped love interest and actually doesn’t go out of her way to get into precarious situations — a rarity in the genre. Probably not surprisingly, Serkis is the most entertaining performer of the cast with his sketchy character.

The action sequences are Martens’ strong suit, but they’re spread out so far that the film keeps losing momentum. By the start of the second hour the pacing becomes so inconsistent, I wanted Tom to just go charging in to get to the nonstop action already.  This was a premise that just needed Martens to lean in on its action hero DNA roots harder instead of trying to make a weak thinking man’s spy thriller.

Martens and Malkin intentionally leave a few subplots unresolved in the hopes of a sequel. If it’s more of the same, that’s a hard pass, but if they embrace the more thrilling aspects of the action genre, a second installment might be worth taking notice.