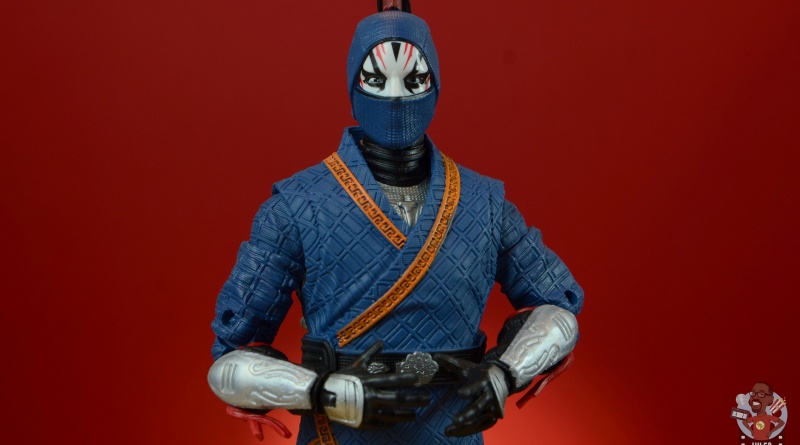 I’m not well-versed in Shang-Chi lore to know all of his villains and supporting characters and I don’t want to stumble upon any spoilers for the movie. One thing is for certain though — Death Dealer is one of the cooler looking figures in the movie and in this Shang-Chi focused wave of Marvel Legends.

Death Dealer is in the early lead for my standout figure of the wave. Let’s see if his(her?) figure delivers.

Packaging:  There’s no mistaking this is the movie focused wave with the prominent Shang-Chi and the Legends of the Ten Rings logo. 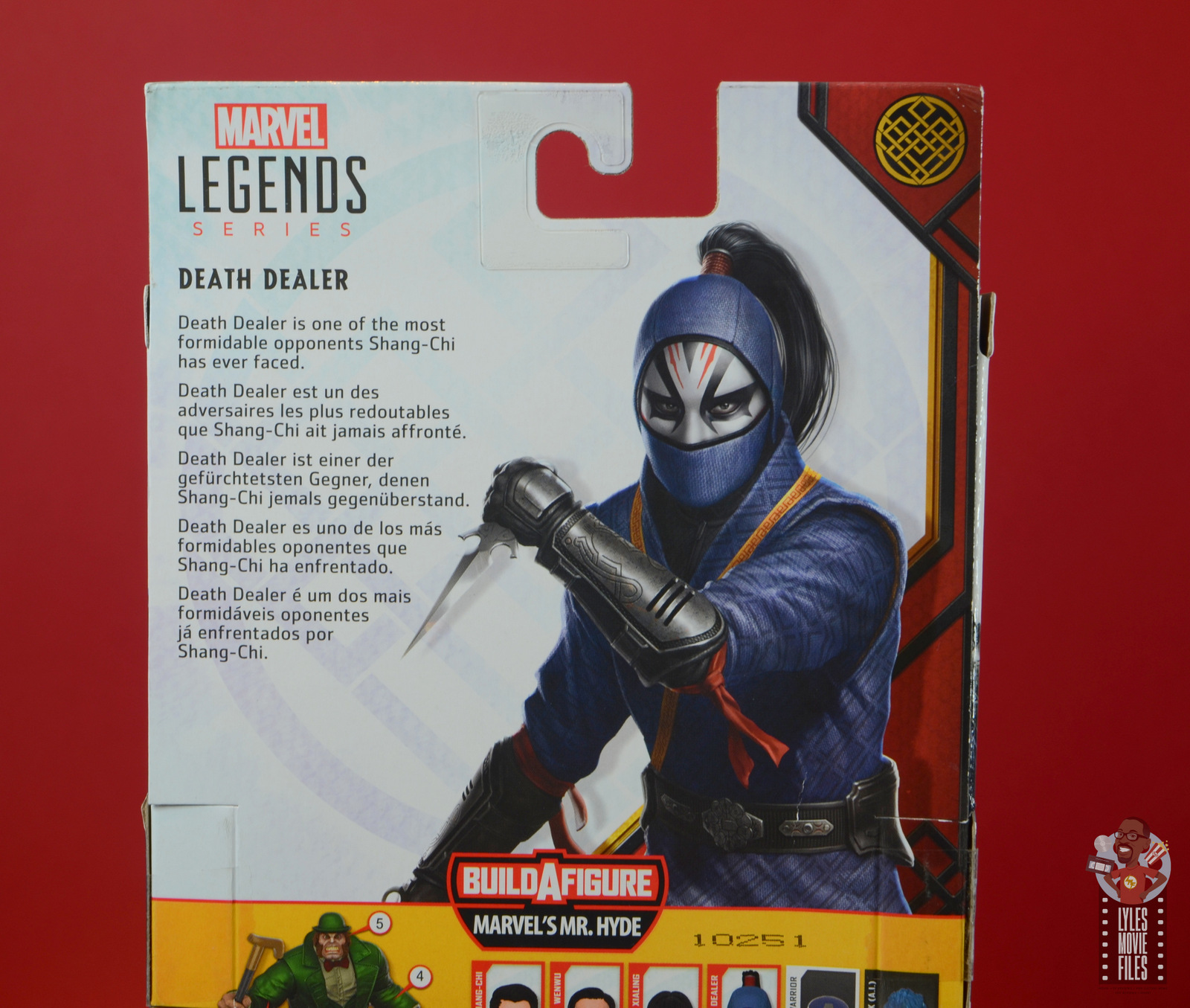 The side package art looks great and in this case, I’m sure there’s a spoiler reason why the bio is so generic and sparse.

Likeness:  Death Dealer really stands out thanks to the ninja style attire with the partially revealed kabuki mask and topknot combination. Hasbro did amazing work on the tunic, which has sculpted paneling and patterns. 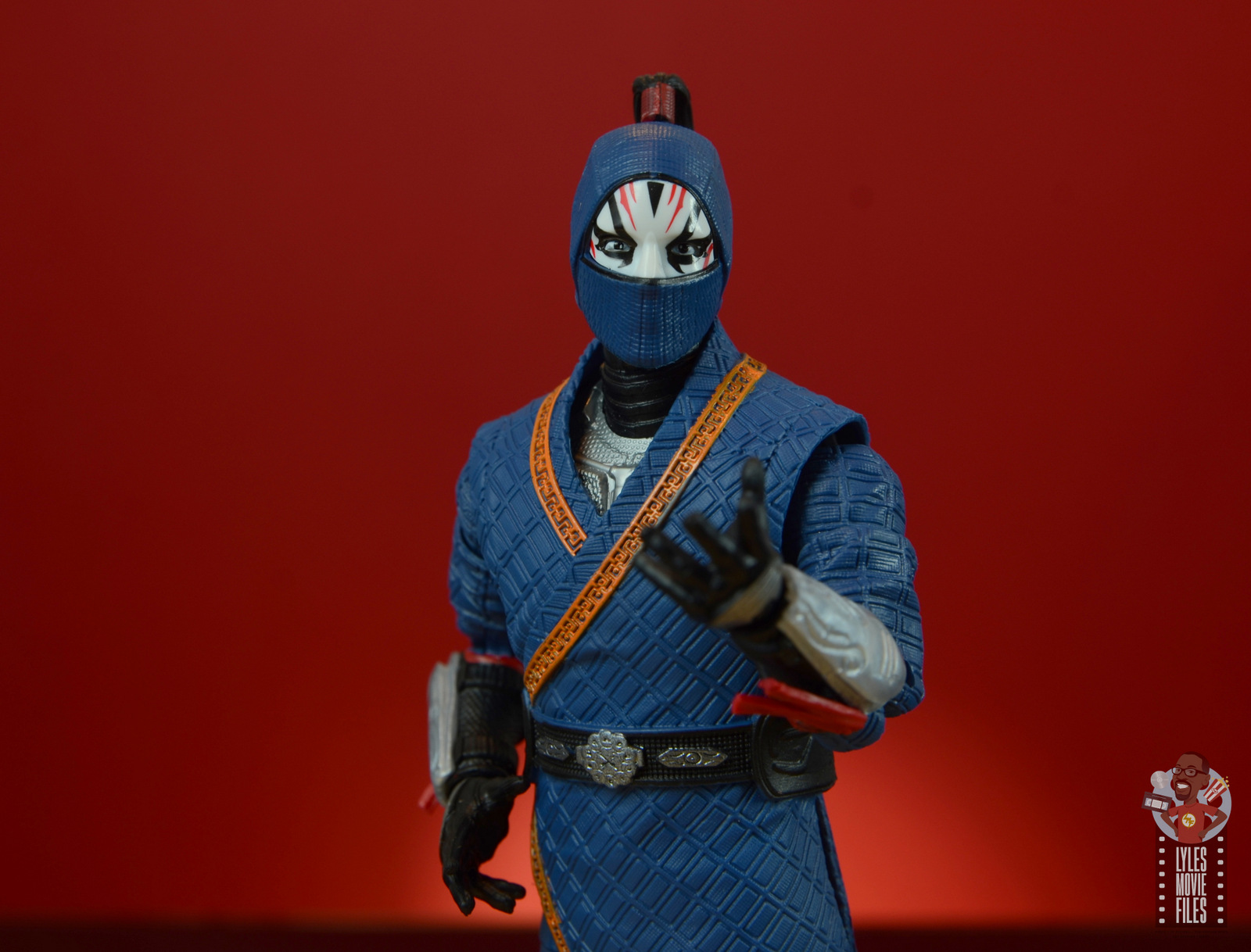 Death Dealer’s gauntlets looks terrific as well with the red folds at the end to cushion the silver plated wrist guards. The texturing on the gloves is also very nicely executed.

This figure shows Hasbro’s ability to repurpose figures without making the reuse too obvious. Death Dealer reuses the Ant-Man sculpt with a new head sculpt, tunic and forearms. It’s impressive how this looks like a completely different character with a few additions. 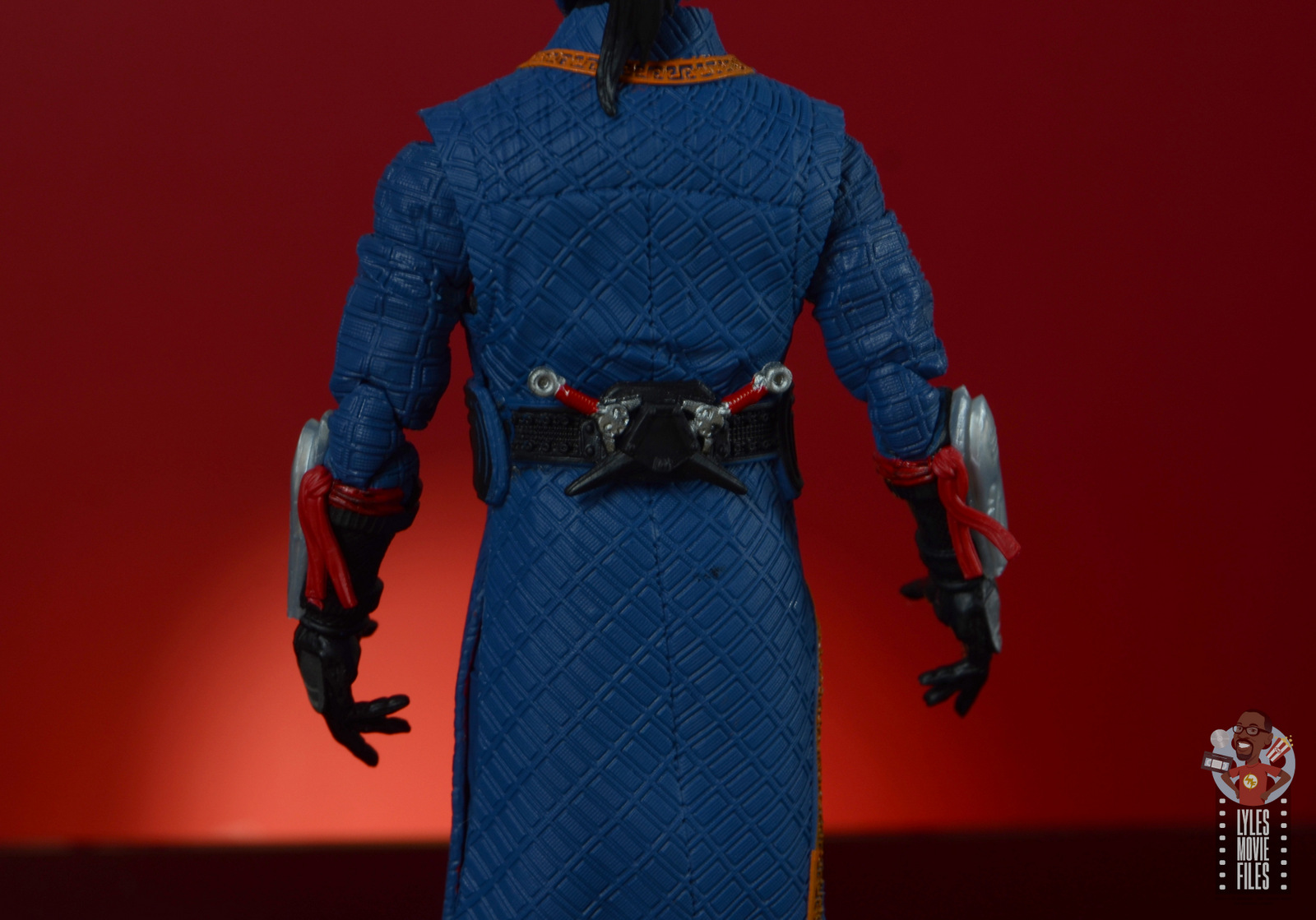 Paint:  The paintwork is essential with Death Dealer as stray marks could ruin some of the intimidation factor. Thankfully, the figure sports one of the nicer paintjobs for a somewhat complicated movie figure I’ve seen in a while.

The head sculpt is flawless with the bright white contrasting with the blacks and reds. Death Dealer’s eyes pop to really convey that sense of mystery.

The grey on the forearms and knee pads seems a little flat and could have used more of a shiny silver paintjob. On my figure the only issue was a stripe of the orange paint from the tunic lining spilled over onto the blue section. 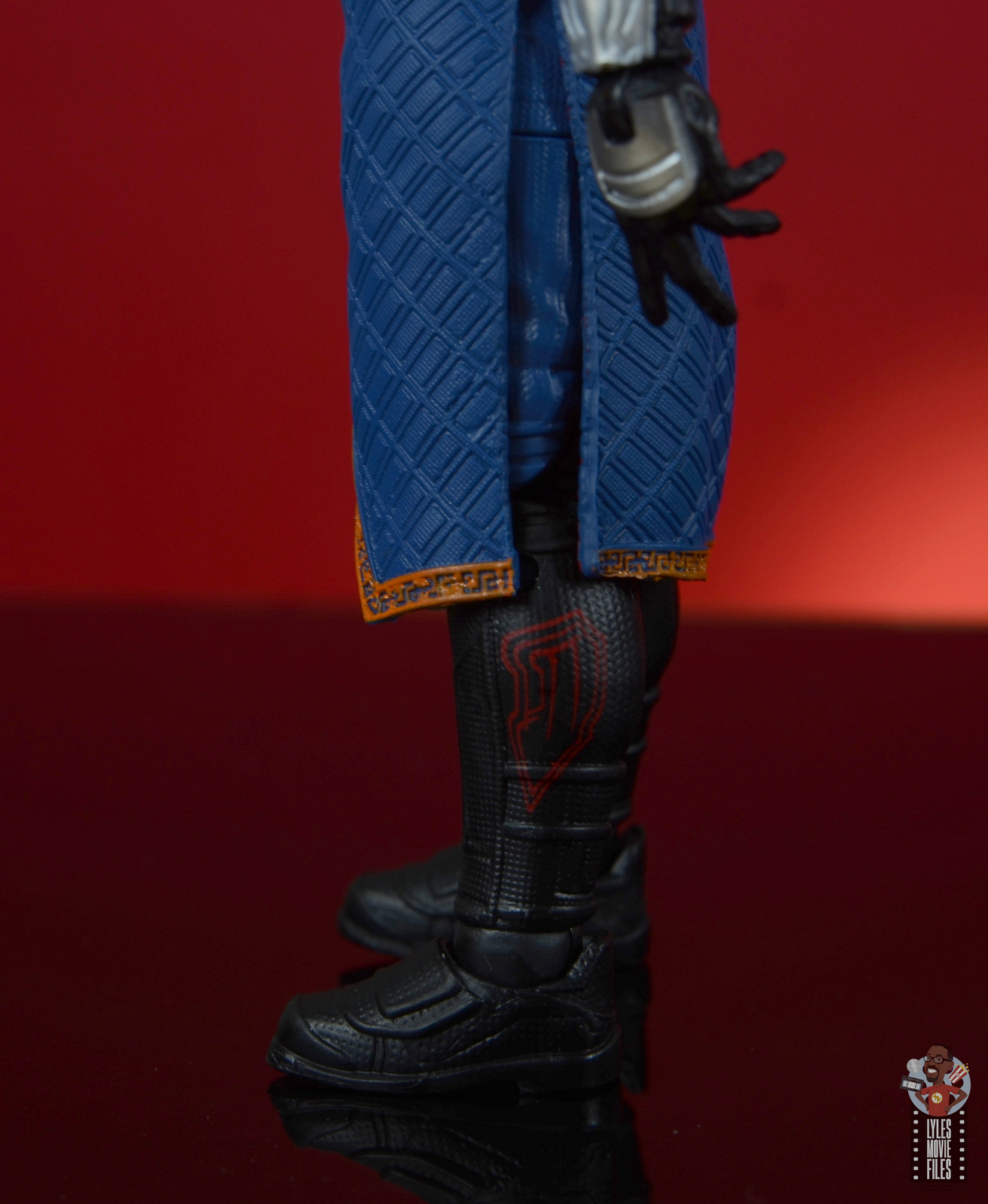 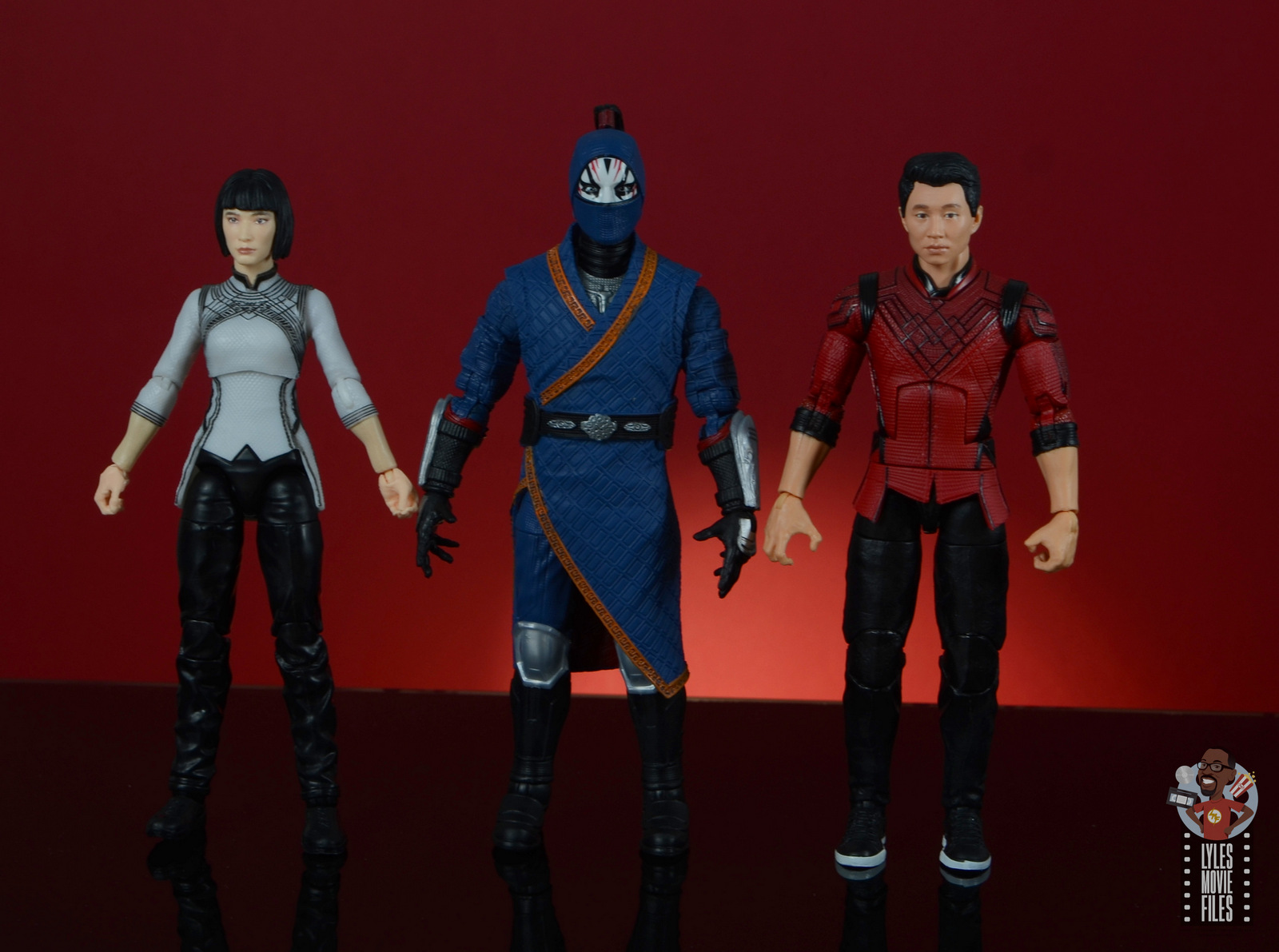 Scale:  There’s no real scale measurements for Death Dealer so I don’t have a firm sense of how tall or short he needs to be compared to other characters. 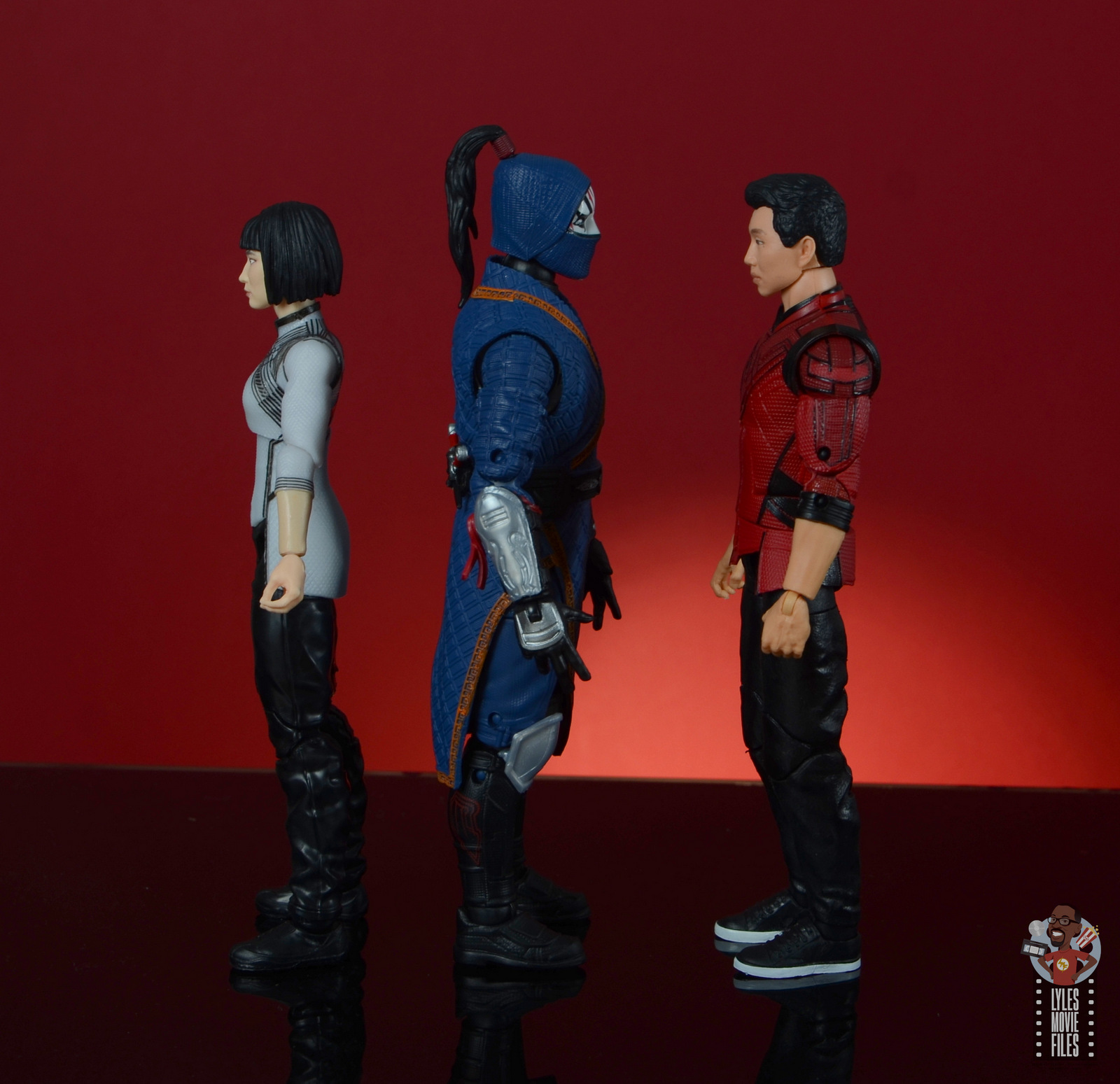 From the few production shots I’ve seen, he looks about the same height as Wenwu, but I’ll reserve judgement on this category until I see the movie.

Articulation: From the brief glimpses in the trailer, Death Dealer looks to be every bit as formidable a hand-to-hand combatant as Shang-Chi so his figure needs to be able to hit a variety of poses. 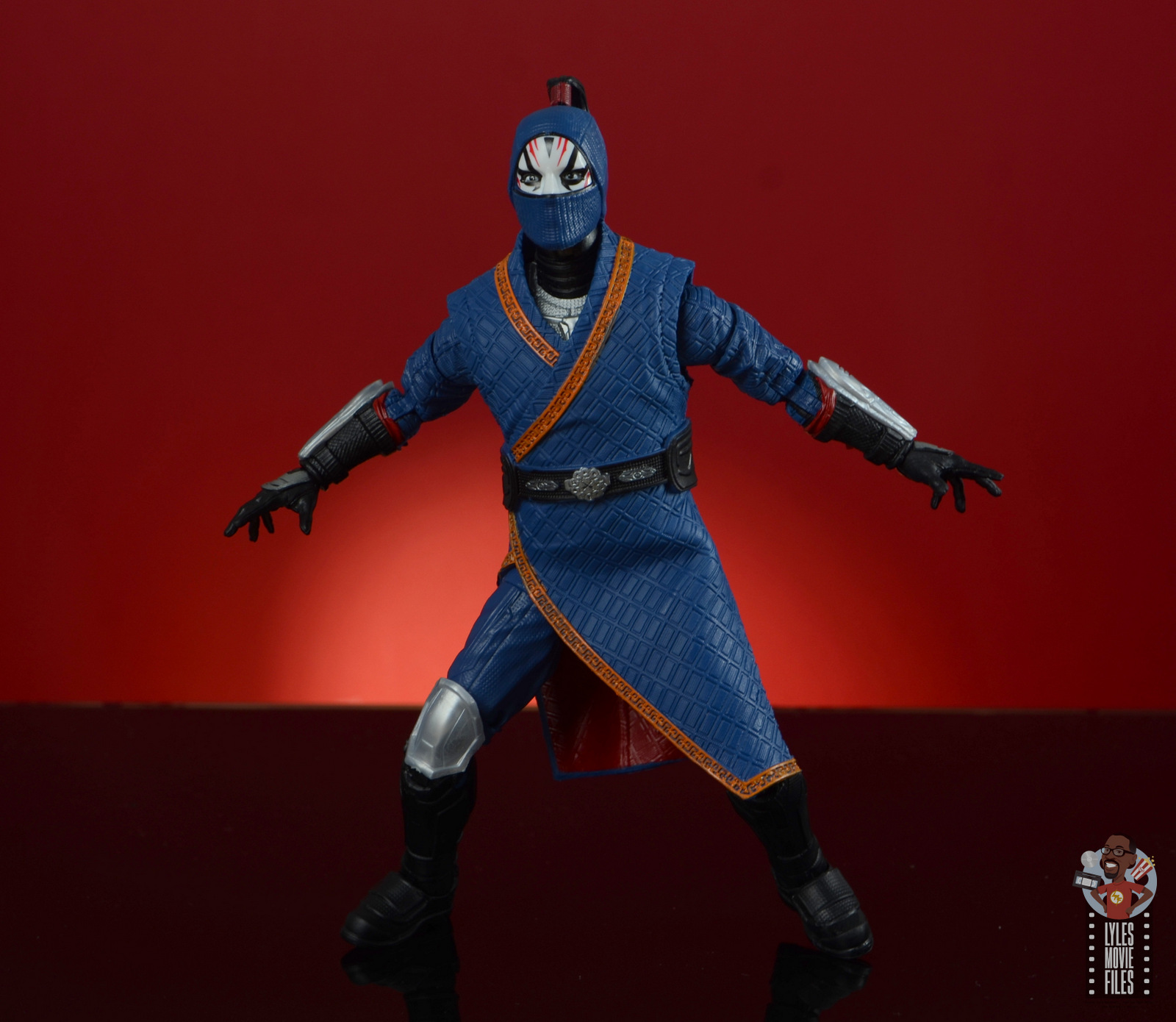 The overlay does drastically limit the torso movement, but the leg movement is surprisingly not restricted much at all. 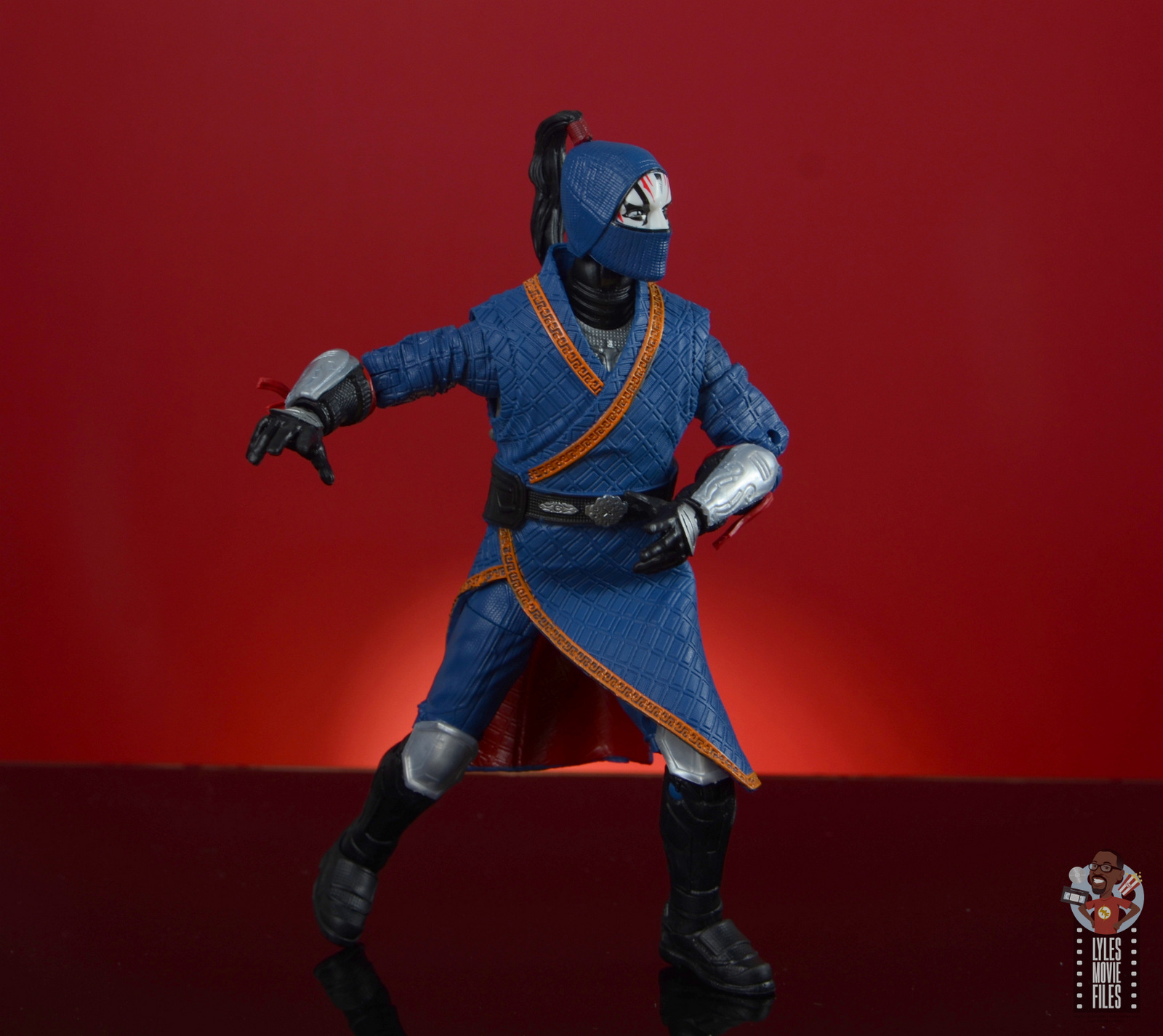 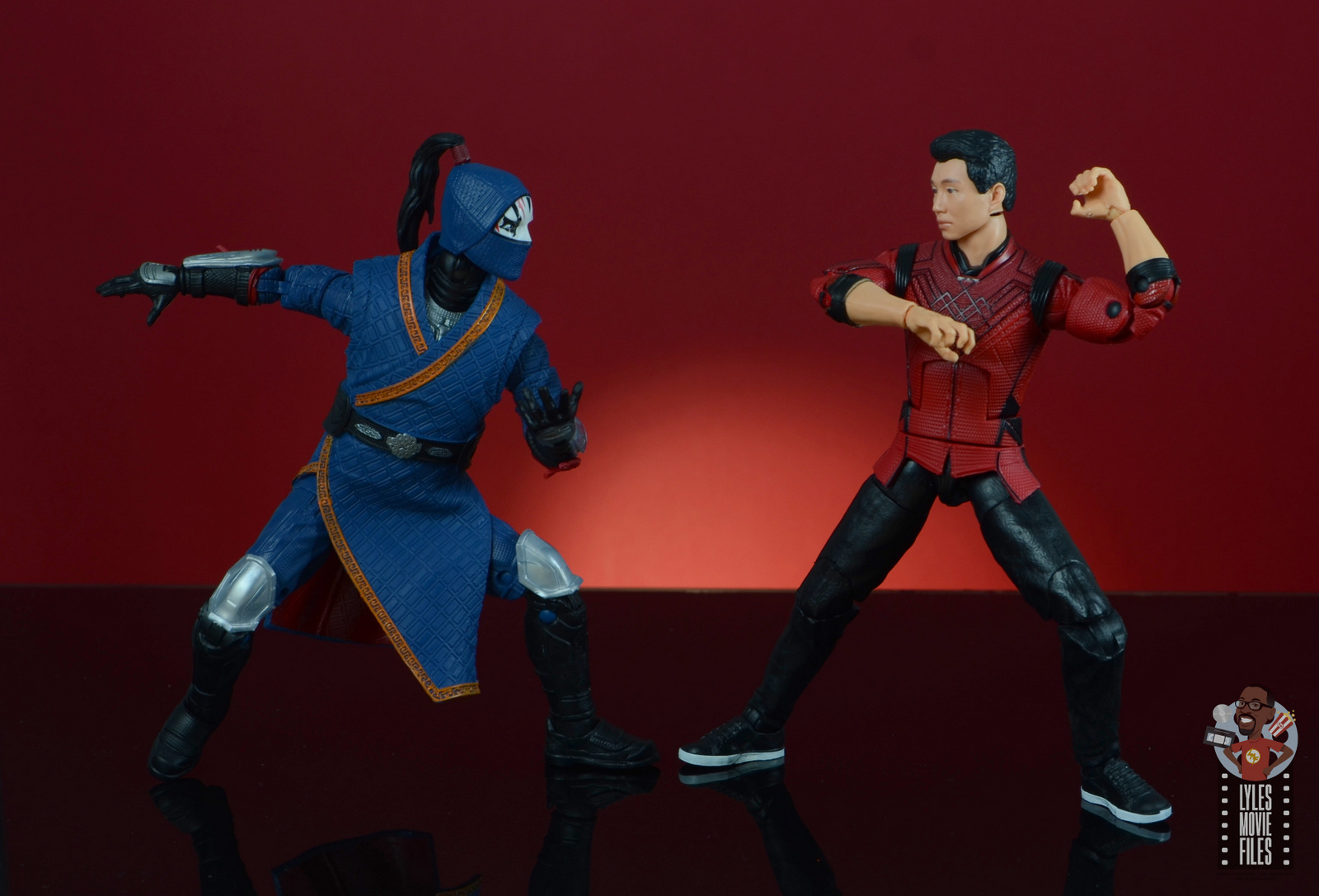 Accessories:  Death Dealer comes with an alternate set of weapons-focused hands. One is a left hand clutching a dagger in a throwing position. The other is a right hand flinging the daggers a la the comic Bullseye figure. That’s such a cool accessory piece and it’s surprising Hasbro doesn’t do release it with figures more often. 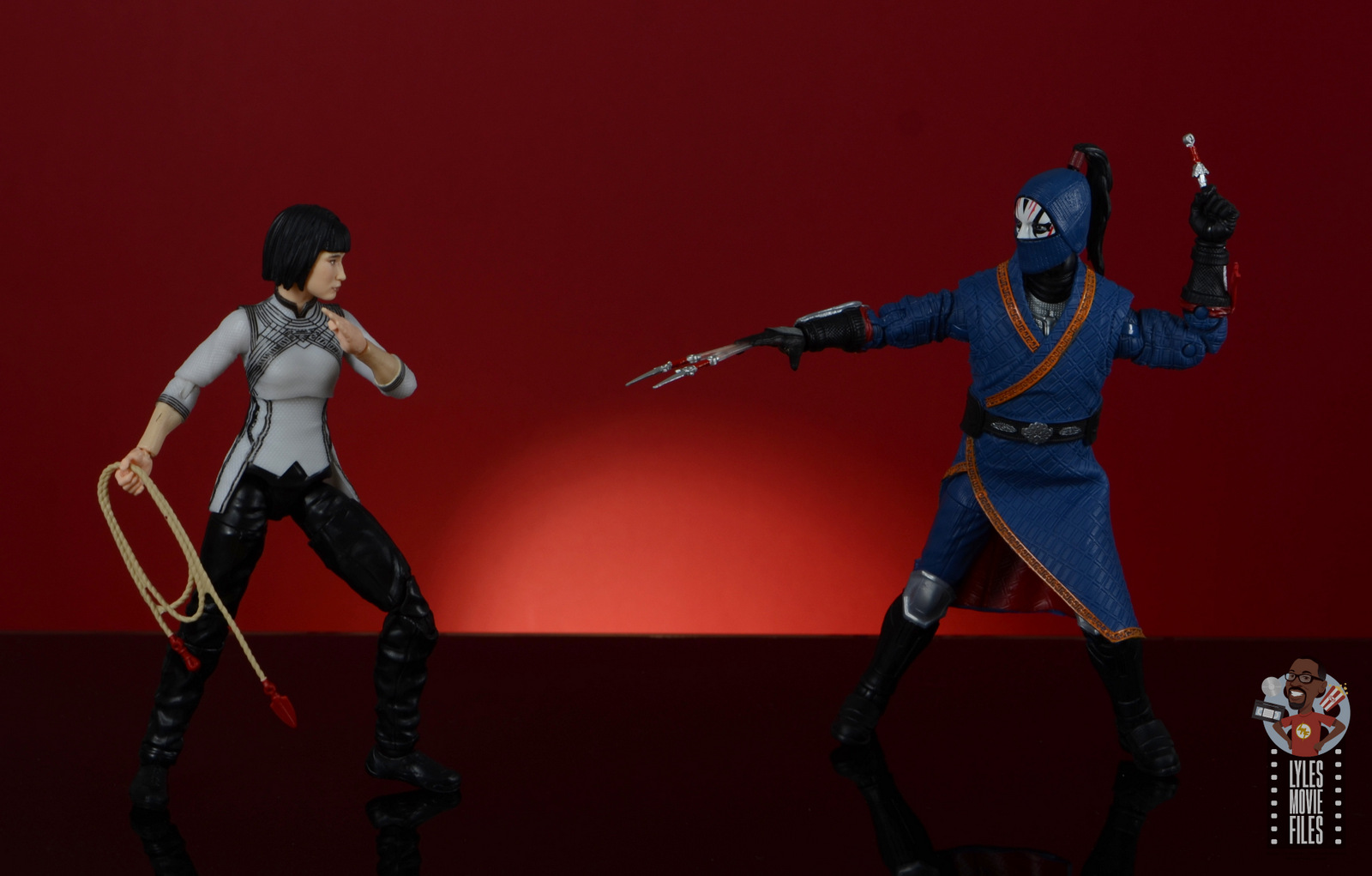 Finally, he’s got the left arm of the Build-A-Figure Mr. Hyde figure. 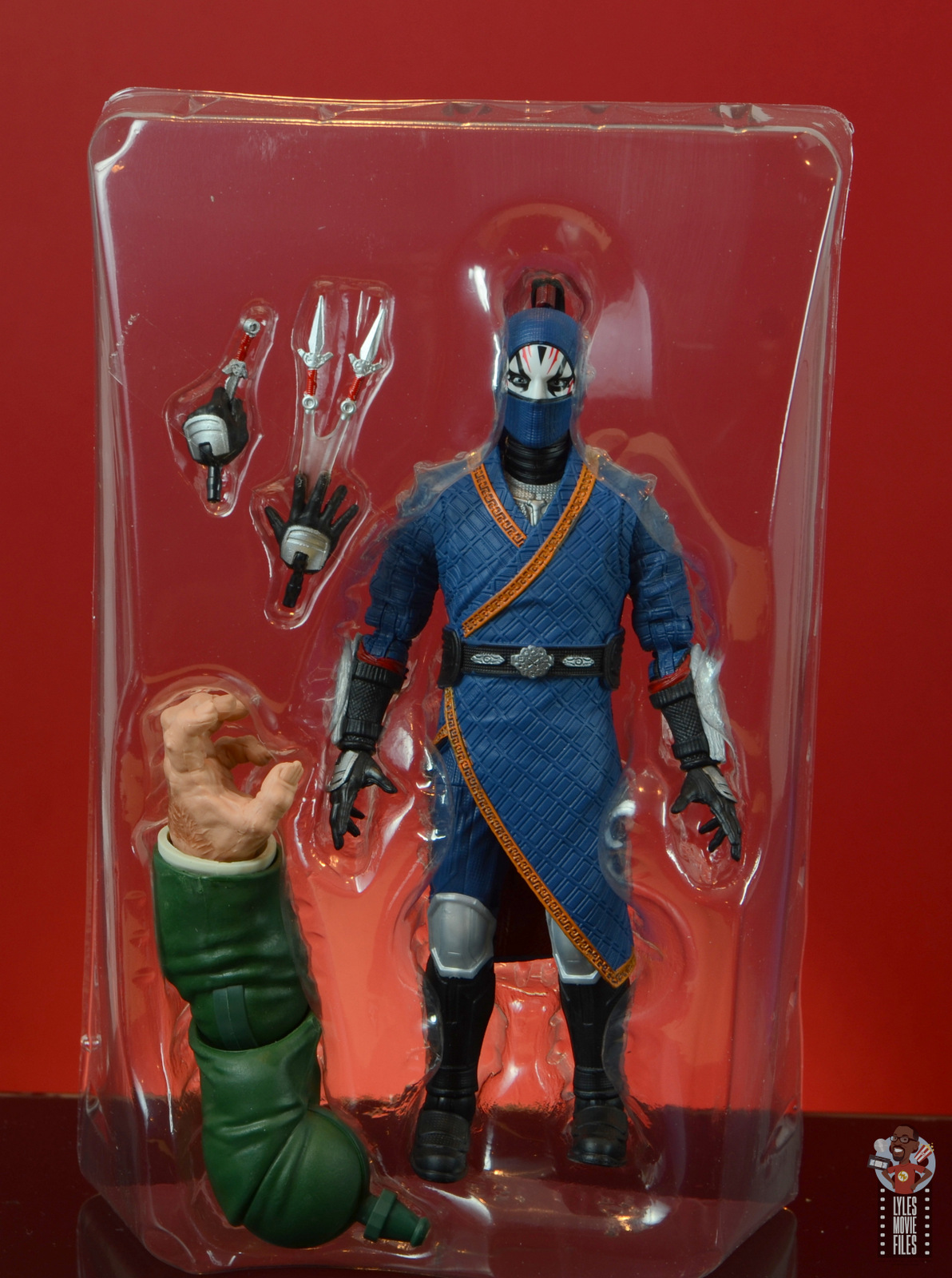 Worth it?  I got Death Dealer for the regular retail price of $20, but given the elaborate nature of his costume with the dedicated sculpting, it feels like a fair value. Still, it would have been nice to stumble upon him for clearance prices like some figures in this wave. 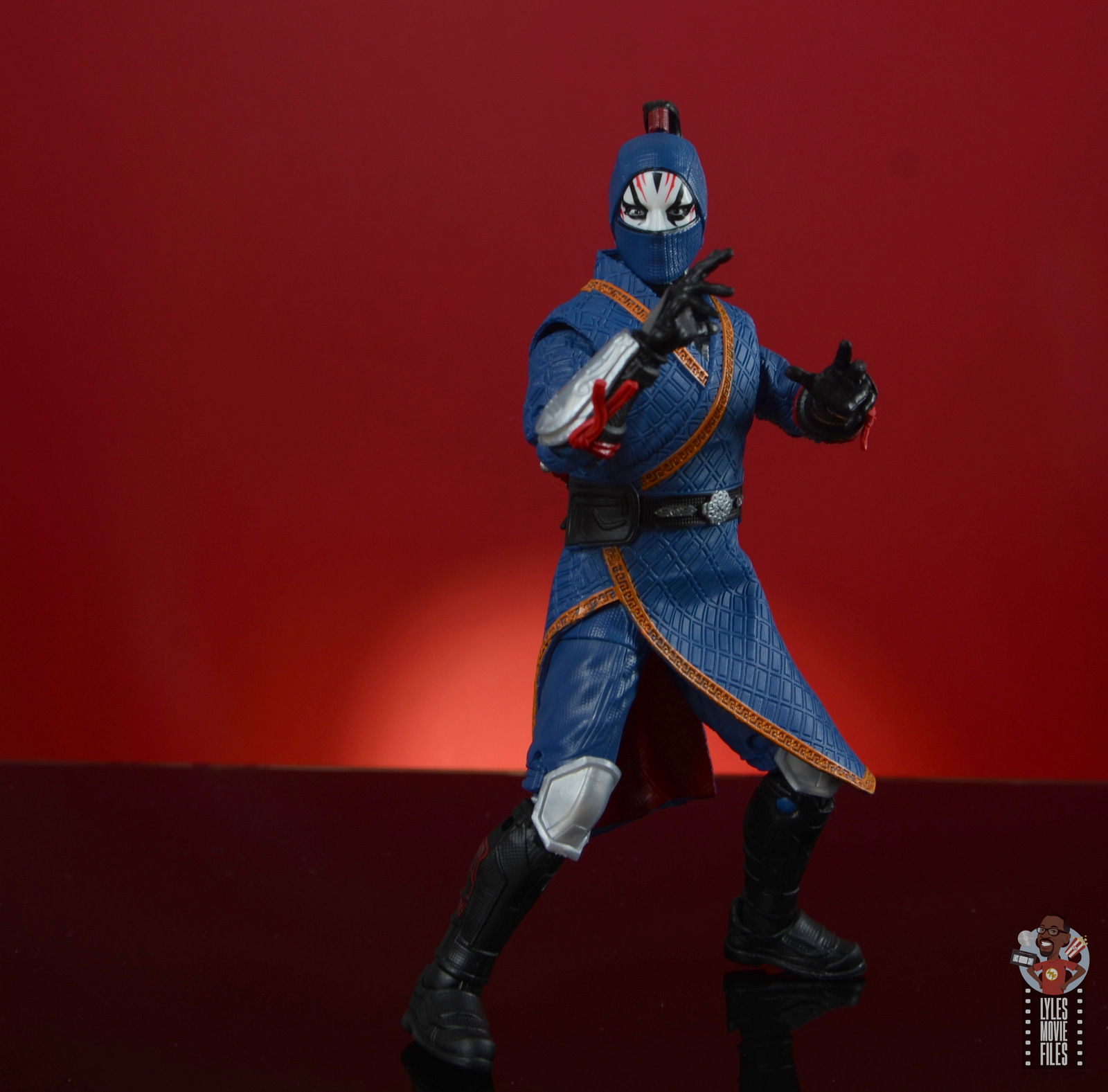 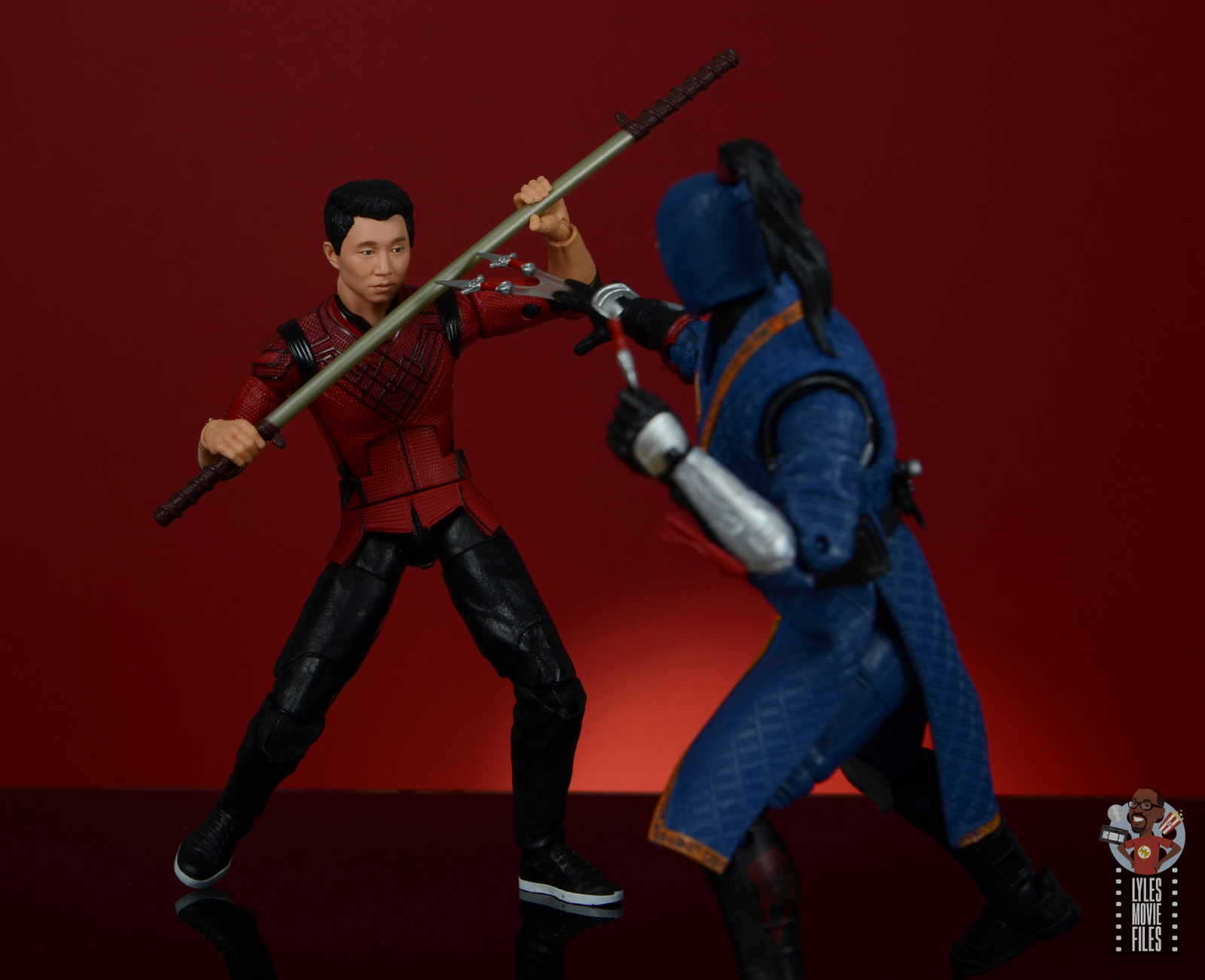 Where to get it?  I got Death Dealer from Target.com, but try your local Gamestops and Walmarts. You can also order him from Amazon and Entertainment Earth.