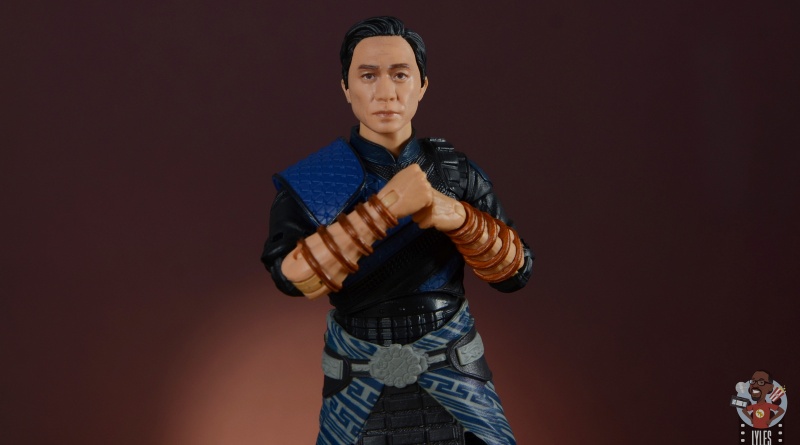 Wenwu is the MCU’s true version of The Mandarin, but is he actually the villain of Shang-Chi and the Legend of the Ten Rings? Saying more would be a spoiler, but the movie offerings from this wave do provide at least two characters for Shang-Chi to fight.

Let’s see how the holder of the 10 rings stacks up in this version.

Packaging:  The movie is the focus of this packaging with the prominent Shang-Chi and the Legends of the Ten Rings logo. I love the art style on the side and rear packaging. 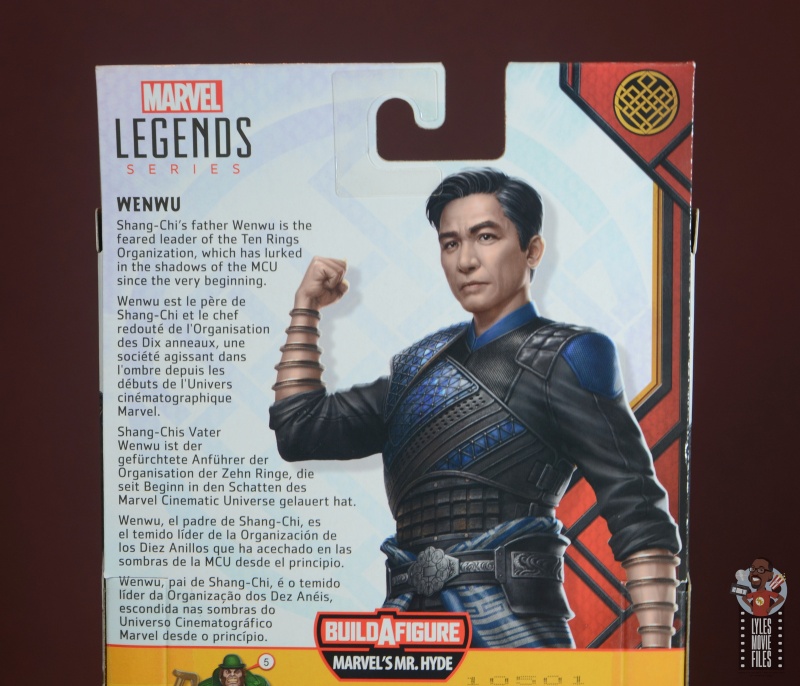 Again the bio is written in that vague Star Wars Black Series style teasing his role and involvement in the MCU.

Likeness:  Wenwu’s battle outfit is pretty snazzy with some ornate levels of detail to every aspect of the armor. The texturing on the shirt is very nice although it would have been nice to actually have some sculpted elements for the scrunched up sleeves. 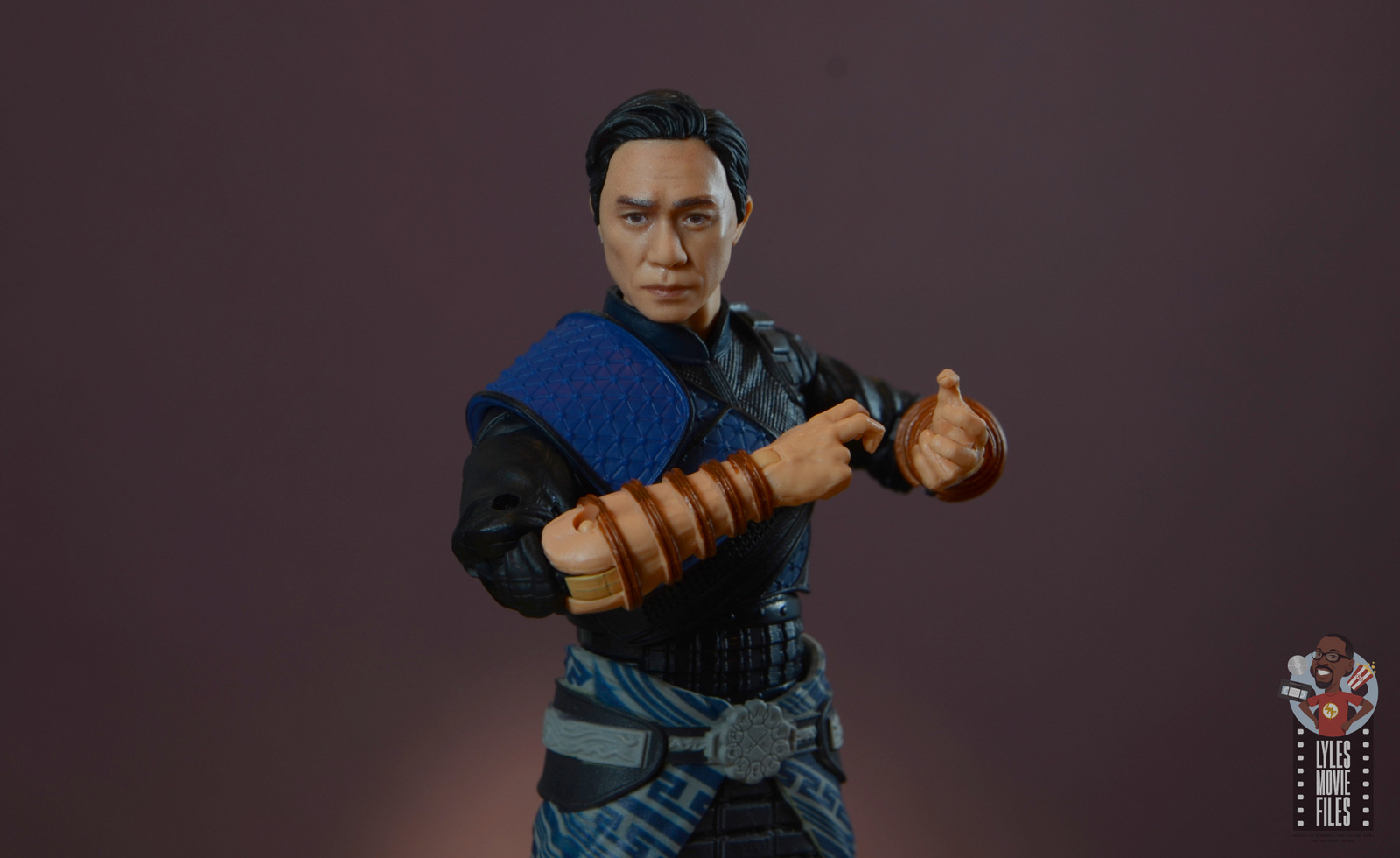 The half shoulder/torso armor is very impressive with the detailing and shifting patterns.

That’s also true for the belt, which has some beautiful sculpting as well as the logo of the Ten Rings in the center. The torso skirt piece has padding that conveys a samurai type of material. I’m interesting to see if this armor reflects Wenwu’s origin, which I’ll hold off on discussing for spoiler sake. 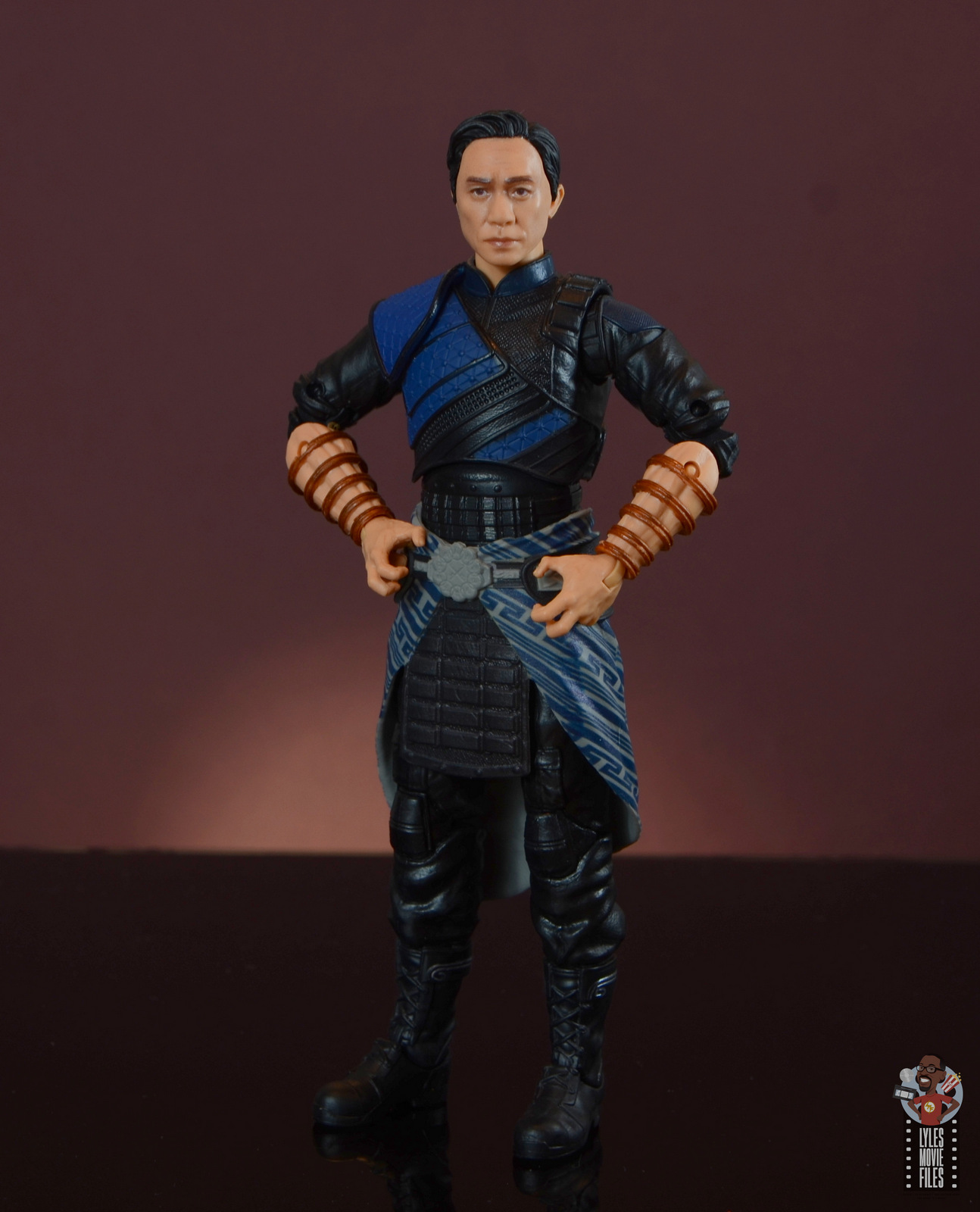 In the film, Wenwu constantly slings the rings and it would have been nice for them to have a looser feel to simulate that. It makes sense to have them sculpted on though so I get it. 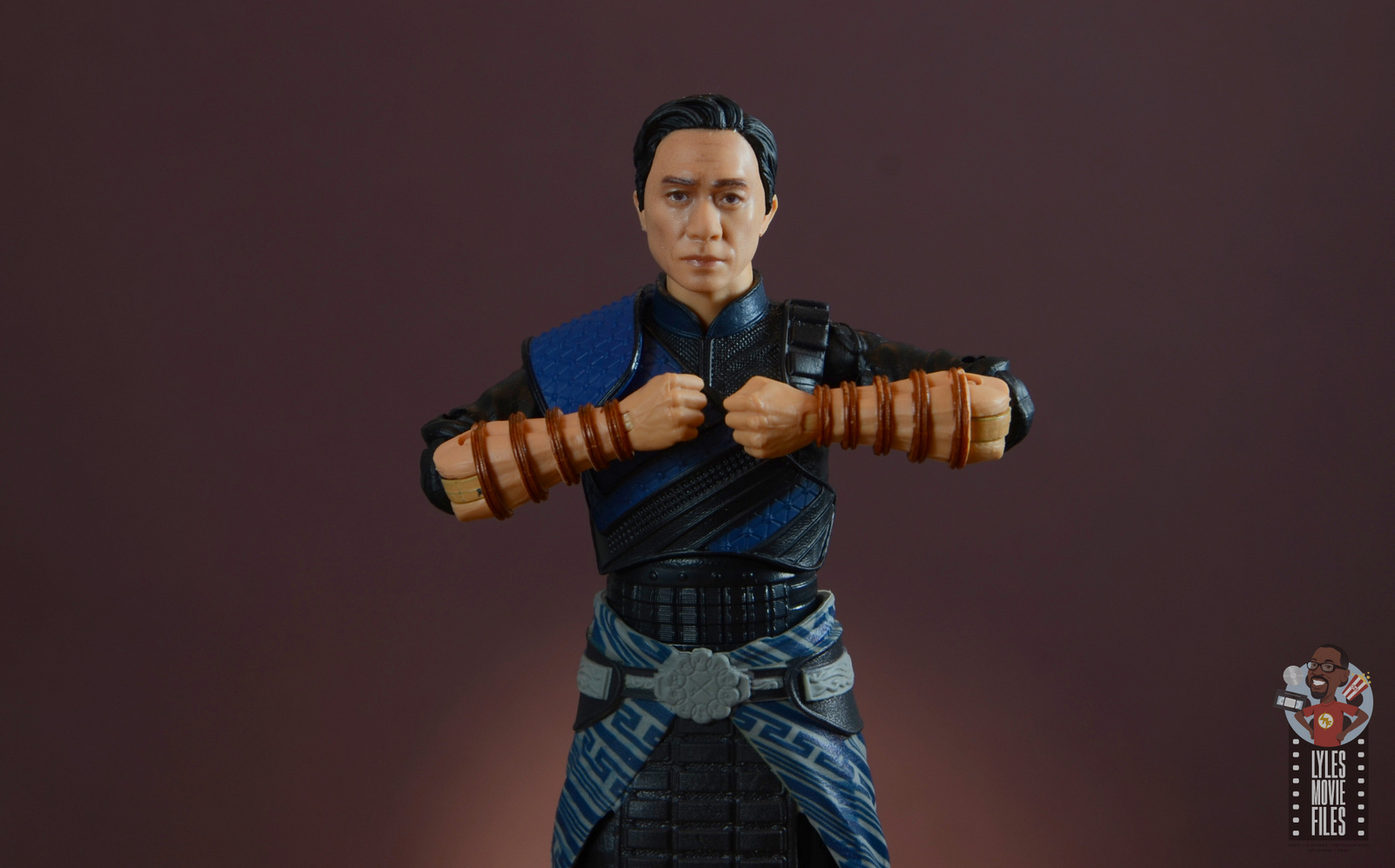 The sculpt’s likeness to actor Tony Leung is remarkable. It’s impressive how much improved these head sculpts have gotten for the MCU performers. It captures Leung’s stern expression and his profile perfectly. This is another exceptional head sculpt from this wave.

Paint: Wenwu is largely in black, blue and grey. Considering the intricate nature of the paintwork of the belt it’s amazing that it was so flawlessly executed.

Only one of the ten rings has some flesh paint slopped over a portion while the others have a sharp metallic sheen. There were no issues with the head sculpt either. 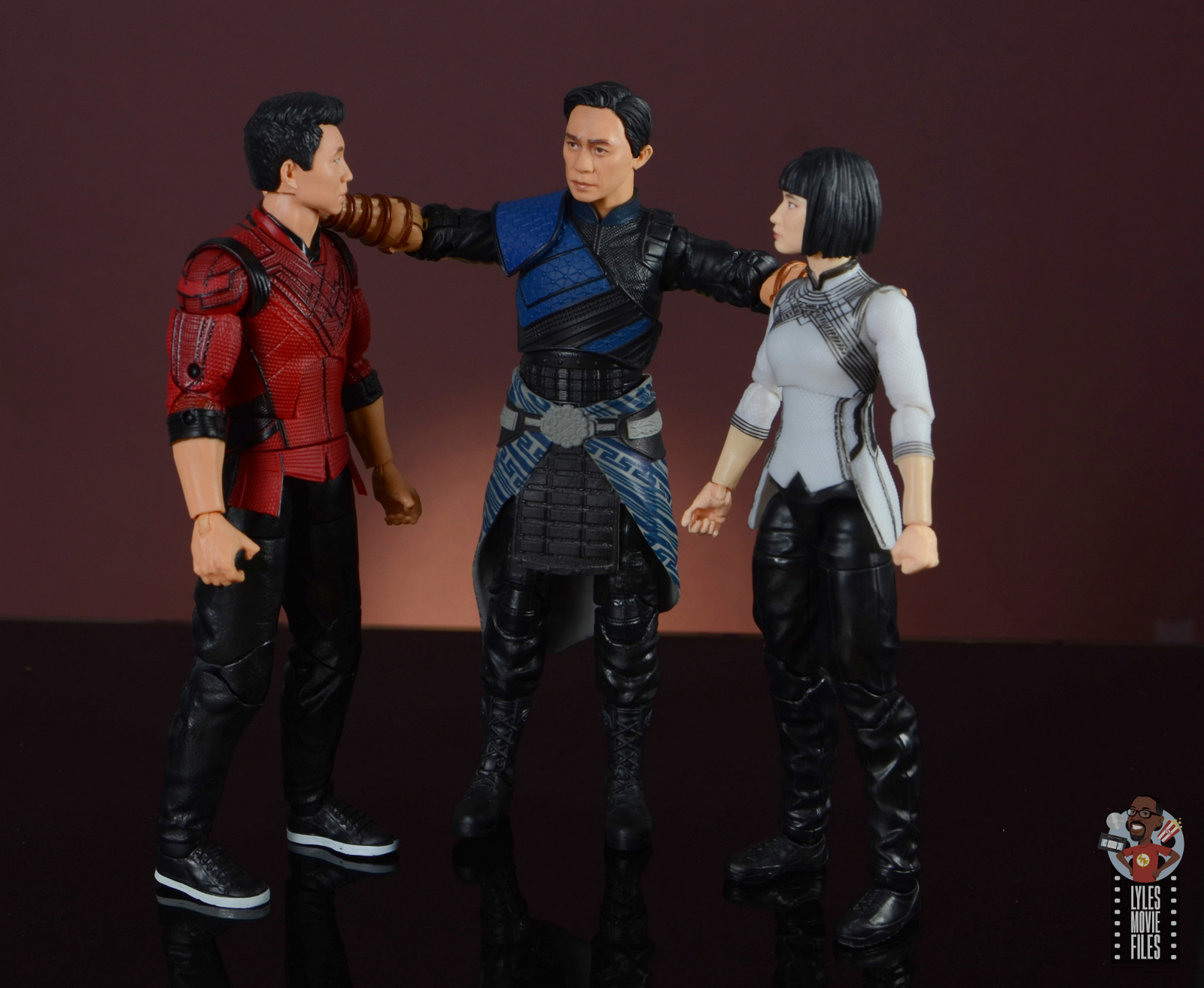 Scale:  Wenwu seems to be about the same height as Death Dealer so I don’t have a firm sense of how tall or short he needs to be compared to other characters. 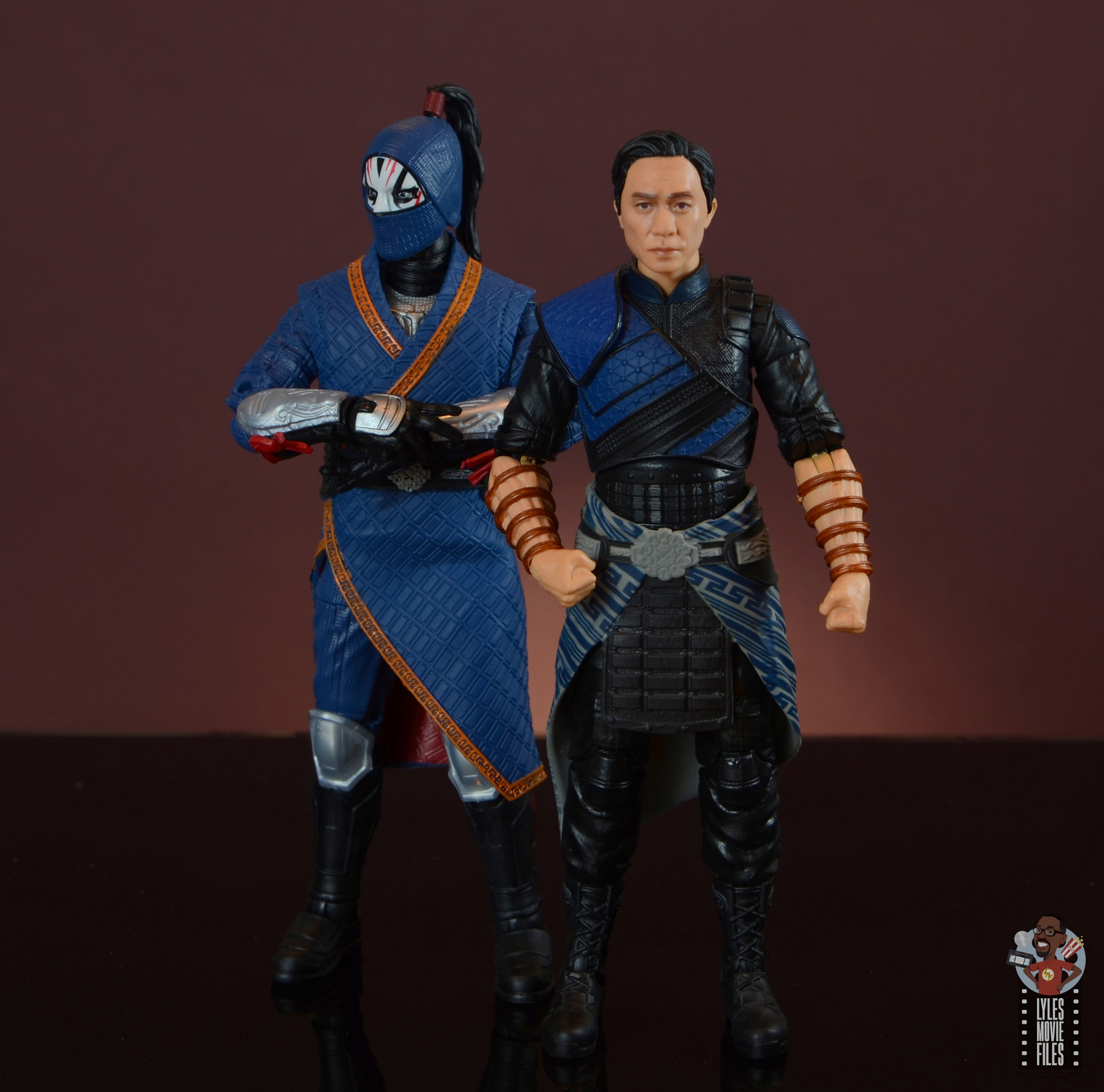 From the few production shots I’ve seen, he looks about the same height as Wenwu, but I’ll reserve judgement on this category until I see the movie.

Articulation: Wenwu uses more sweeping wave motions with the rings for extra emphasis and doesn’t rely so much on kicks. 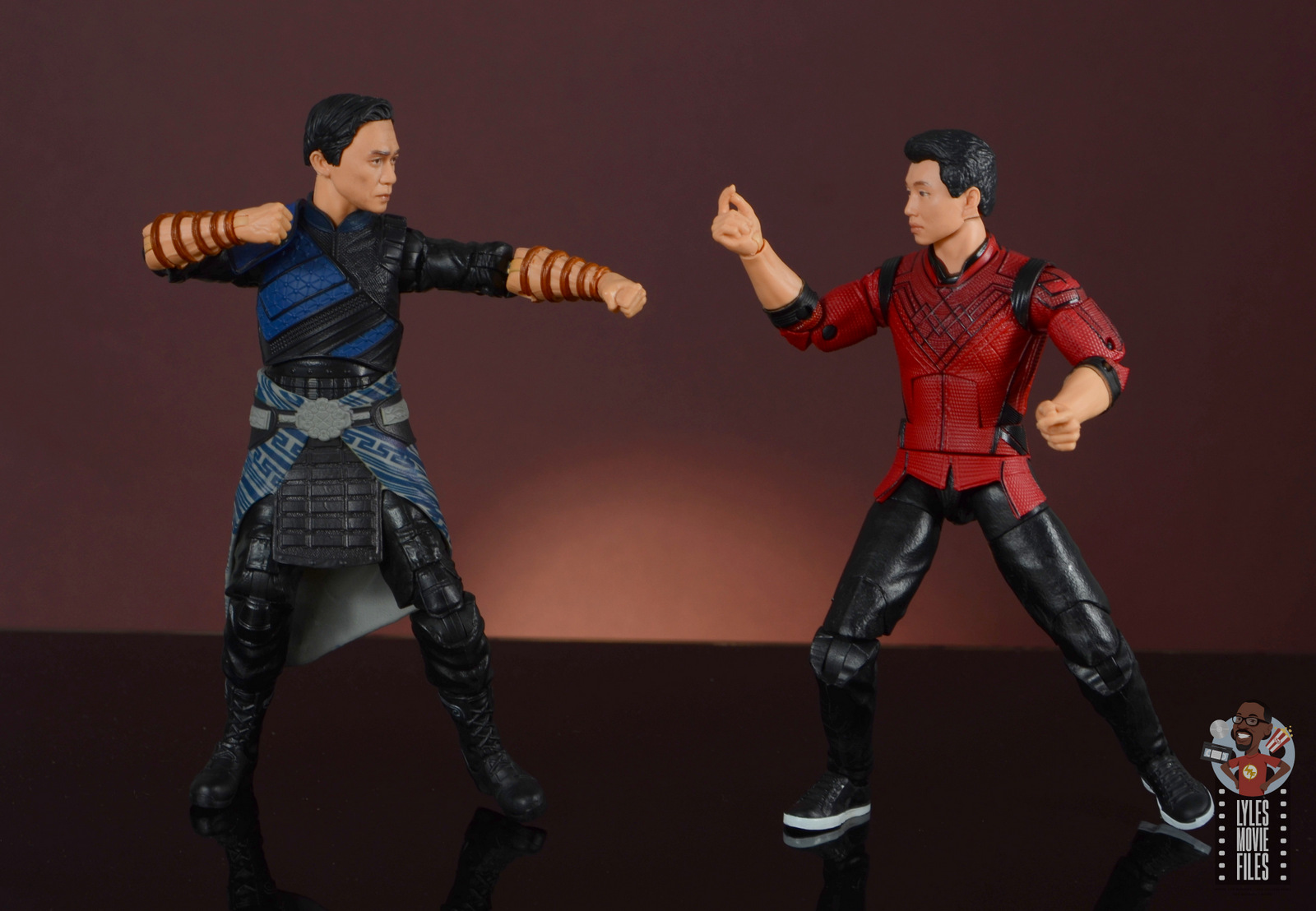 The skirt is not as restrictive as it appears so you can pull off most of Wenwu’s fighting styles from the film. He doesn’t have a ton of high or side kick ability however. 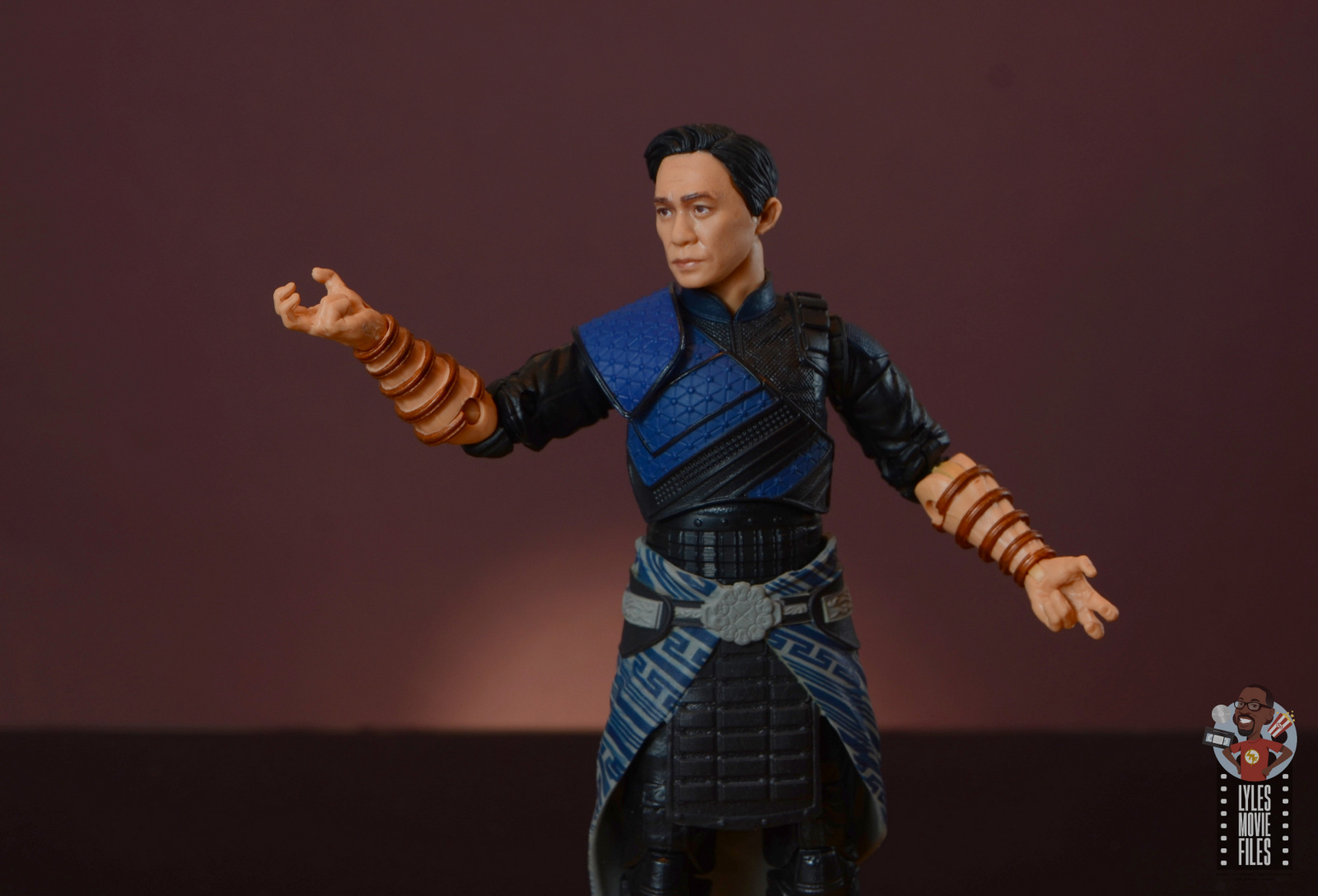 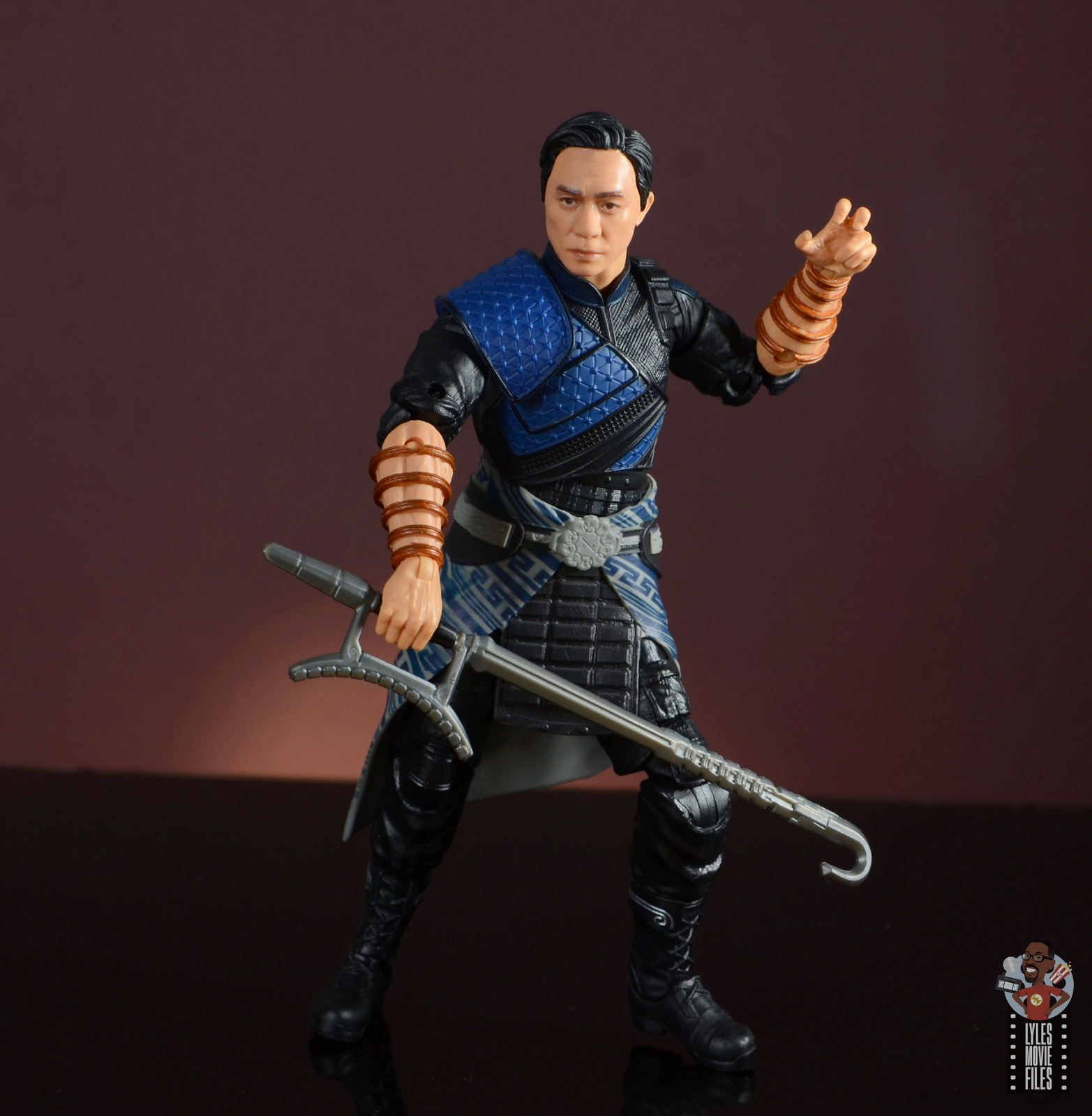 Accessories:  Wenwu comes with two swappable sets with gripping and special stance hands. These swap on and off easily. He also has a hook type bladed weapon. 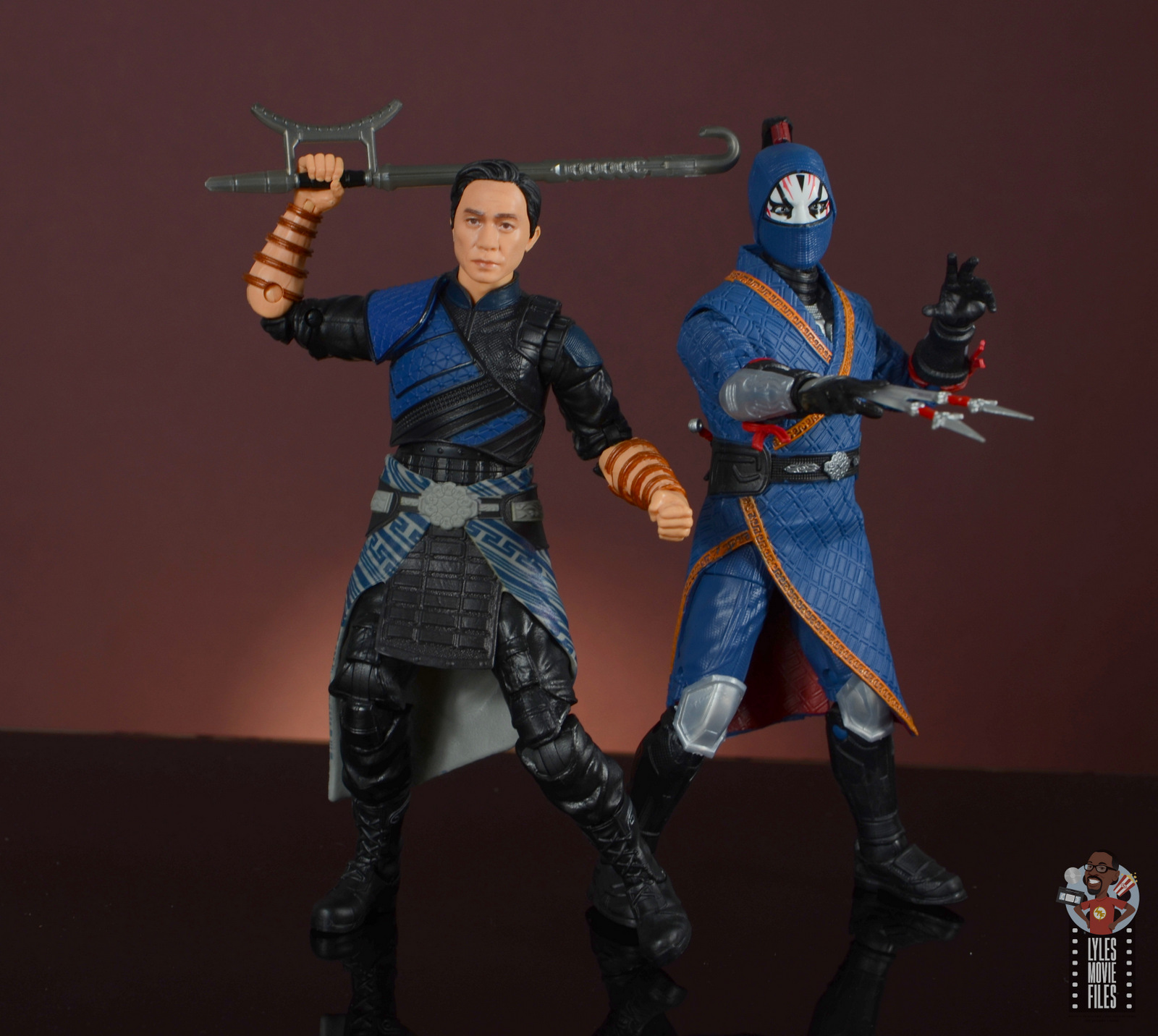 It’s a nice piece with some good detailing throughout that shows the Ten Rings influence on traditional weapons. 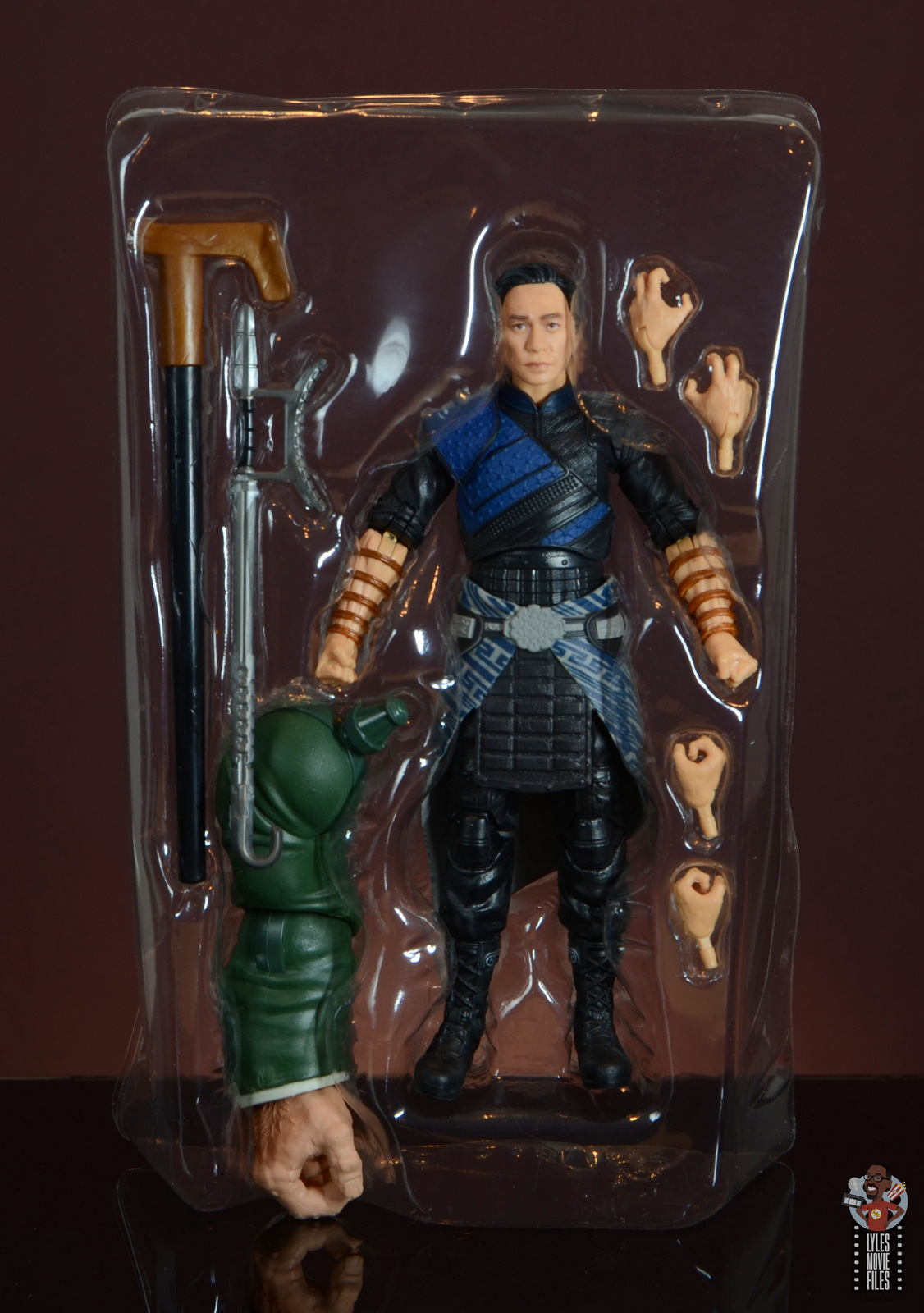 Finally, he’s got the right arm and cane of the Build-A-Figure Mr. Hyde figure. 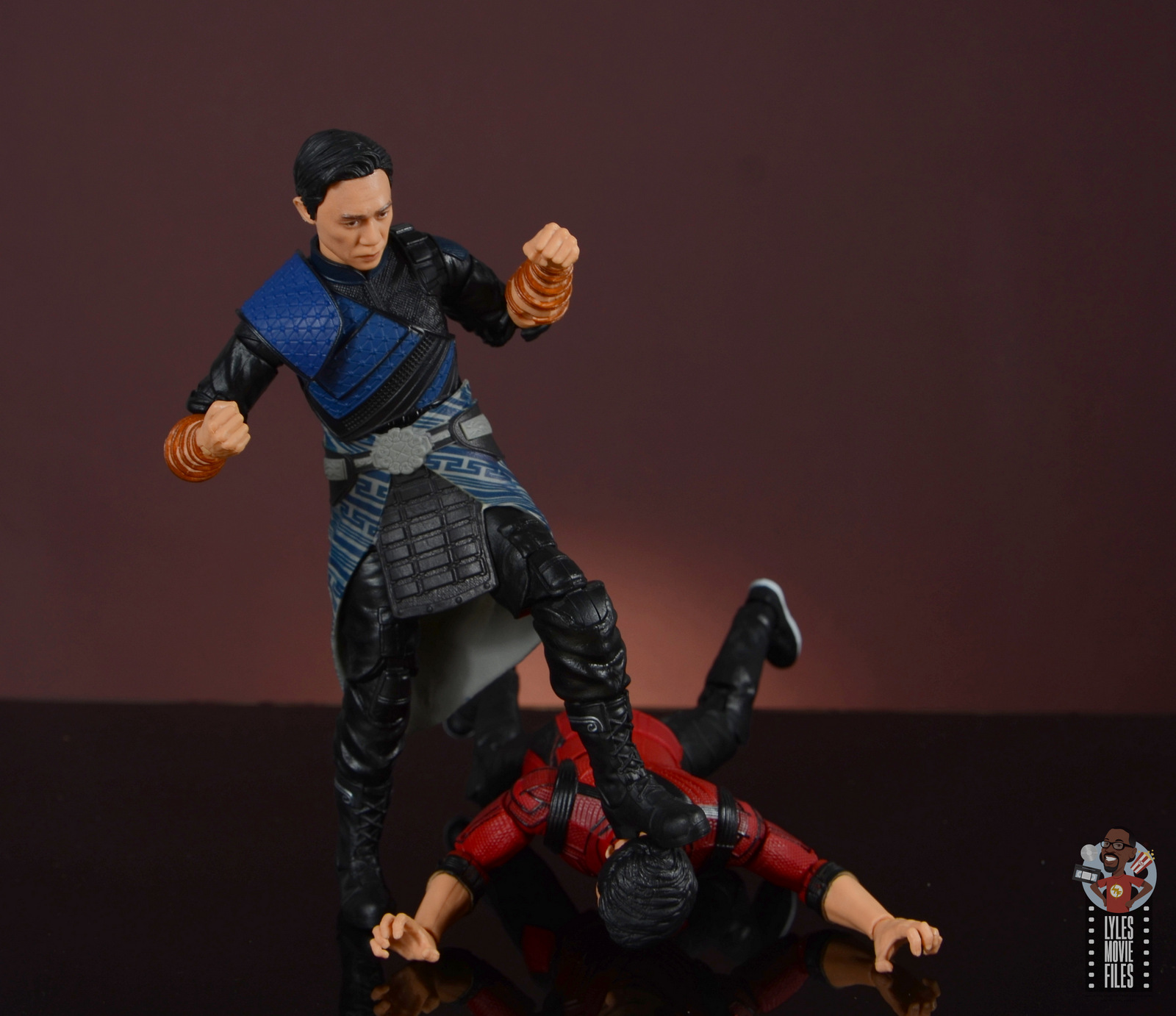 With just a smidge more leg articulation, Wenwu would have warranted the full monty. This is an excellent figure with amazing detail at this scale. Hasbro did an overall outstanding job with these figures and with the movie, hopefully more collectors will want to add them to their collection. 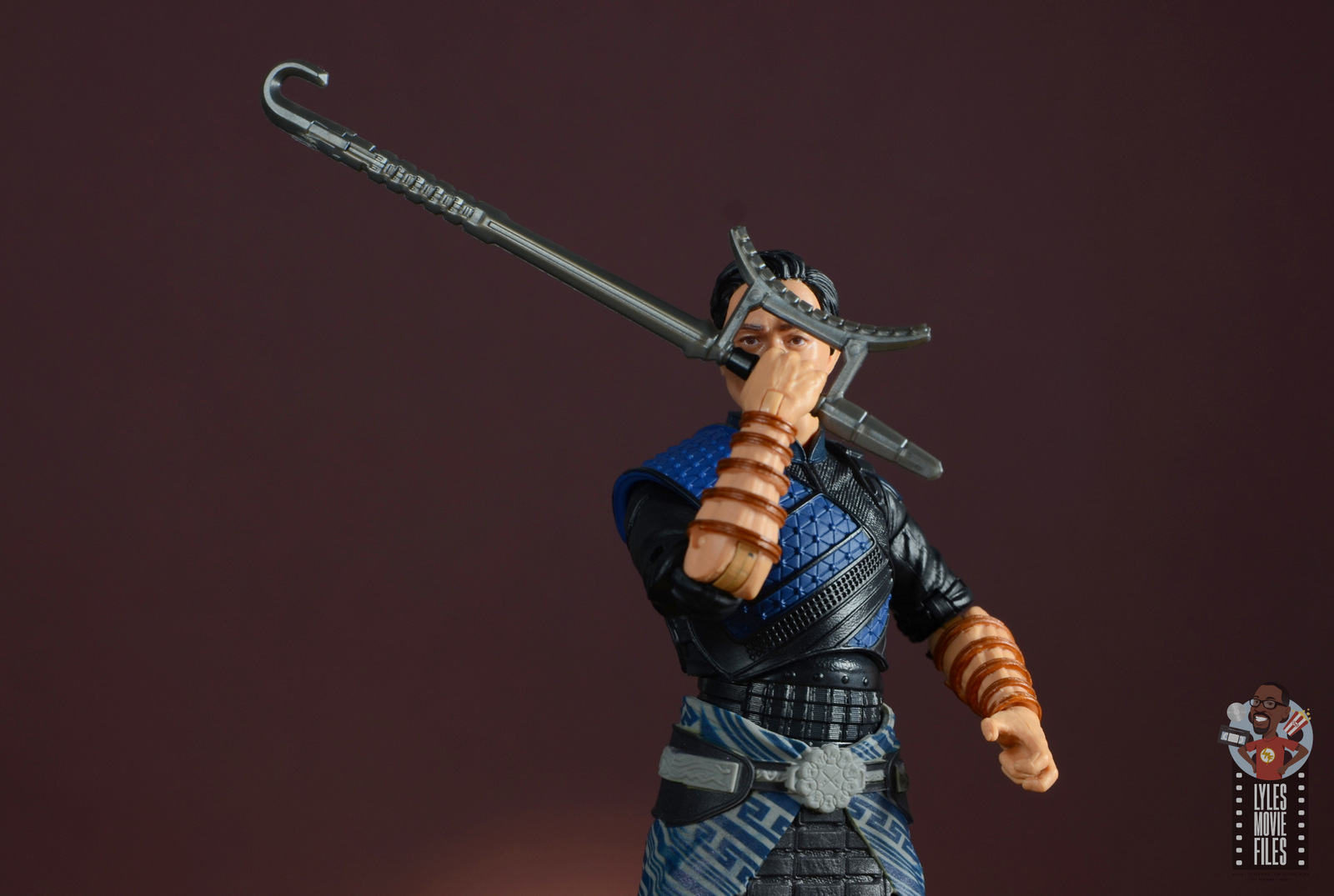 Where to get it?  I got Wenwu from Target, but try your local Gamestops and Walmarts. You can also order him from Amazon. This wave is starting to get clearanced out so you should try and grab him once you see him or he might be hard to track down later.