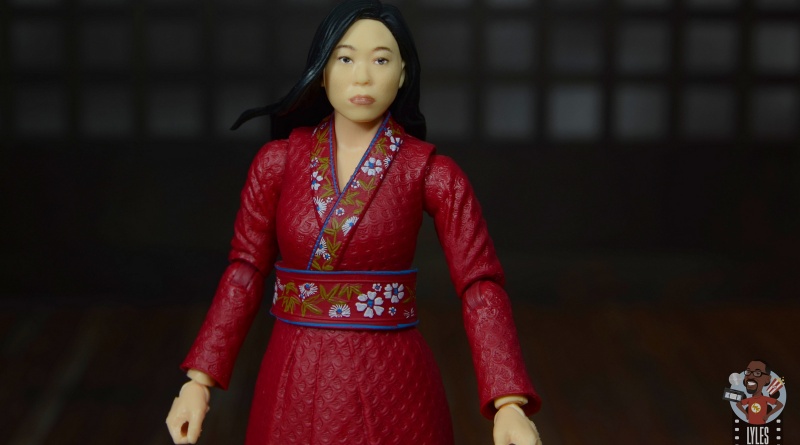 I’m not the biggest Awkafina fan so I wasn’t that excited about her casting as Katy for Shang-Chi and the Legend of the Ten Rings. As Shang-Chi’s best friend, Katy was a big player in the film so it made sense for her to get a figure in the early output of Shang-Chi Marvel Legends figures.

Target got an exclusive Shang-Chi figure with Katy meaning she lacked a Build-A-Figure part. I wasn’t tempted until she finally went down to clearance prices in my area. Let’s see if this figure is on target.

Packaging:   Although a Target exclusive, Katy basically looks the same as every other Shang-Chi figure in the line, which is a bonus for MOC collectors. The artwork on the side shows off the elaborate detailing on the robe.

Her bio is a little sparse though, which doesn’t offer much on the character and why she’s toting a bow and arrow with her figure. 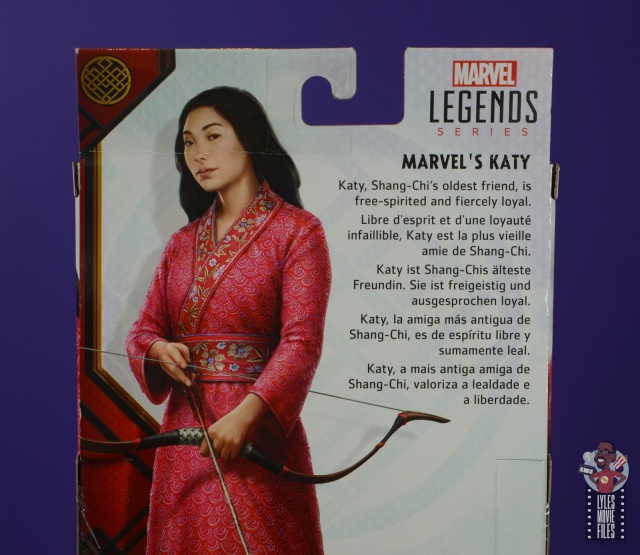 Likeness:  Hasbro opted for Katy’s attire from the final scene instead of her regular civilian gear she wore for most of the film. This matches the Shang-Chi and Xialing figure, which are also in their final fight attires. 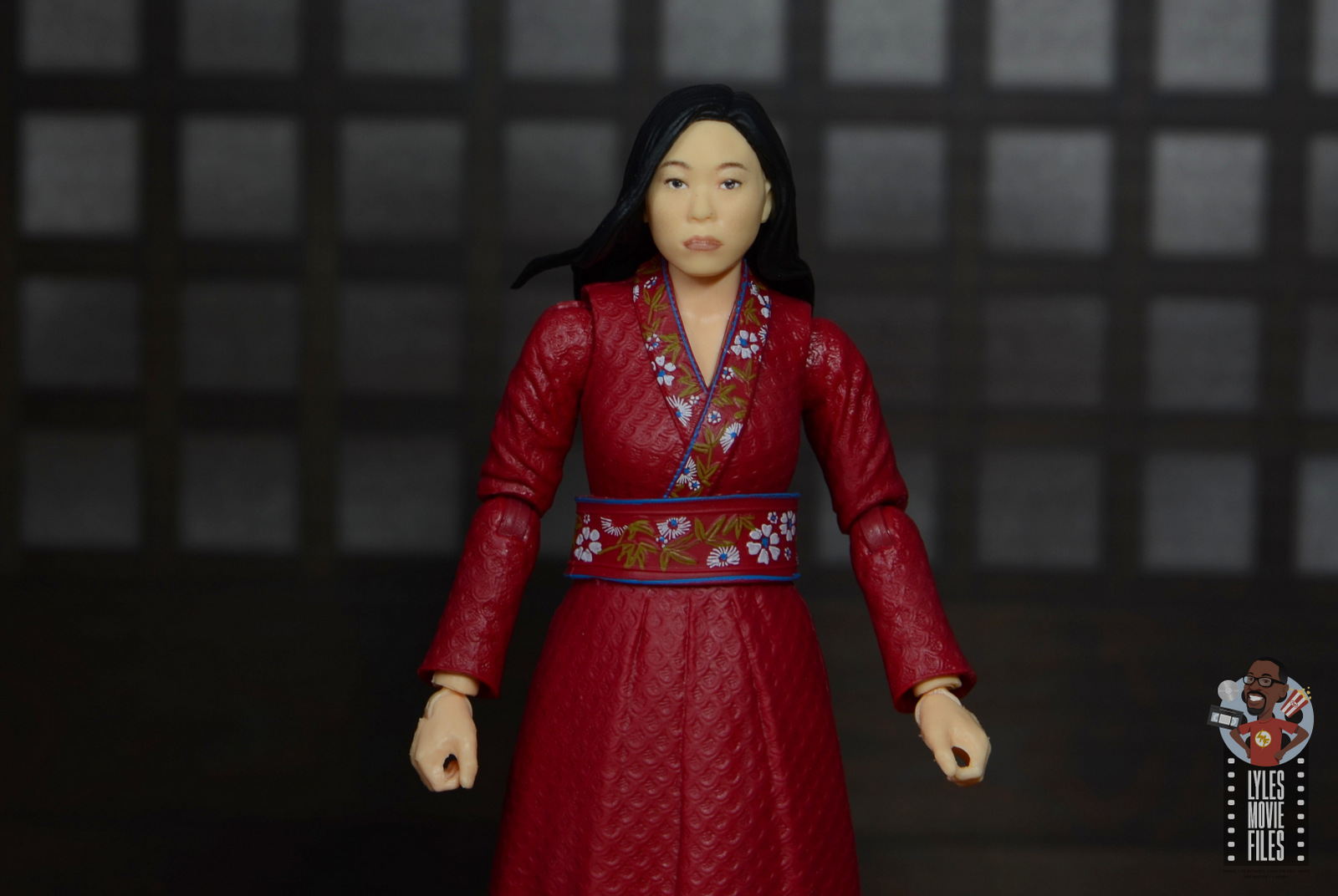 Katy is in a gown. That doesn’t sound exciting at all, but Hasbro did amazing work with the teardrop style texture and detailing. Those flowers aren’t just painted on!

The likeness to Awkafina is also very well done although it’s kind of a somber and serious expression for Katy. In fairness, she did have more of a focused presence at the second half of the movie, but it’s an interesting choice for one of the film’s more lighthearted characters. 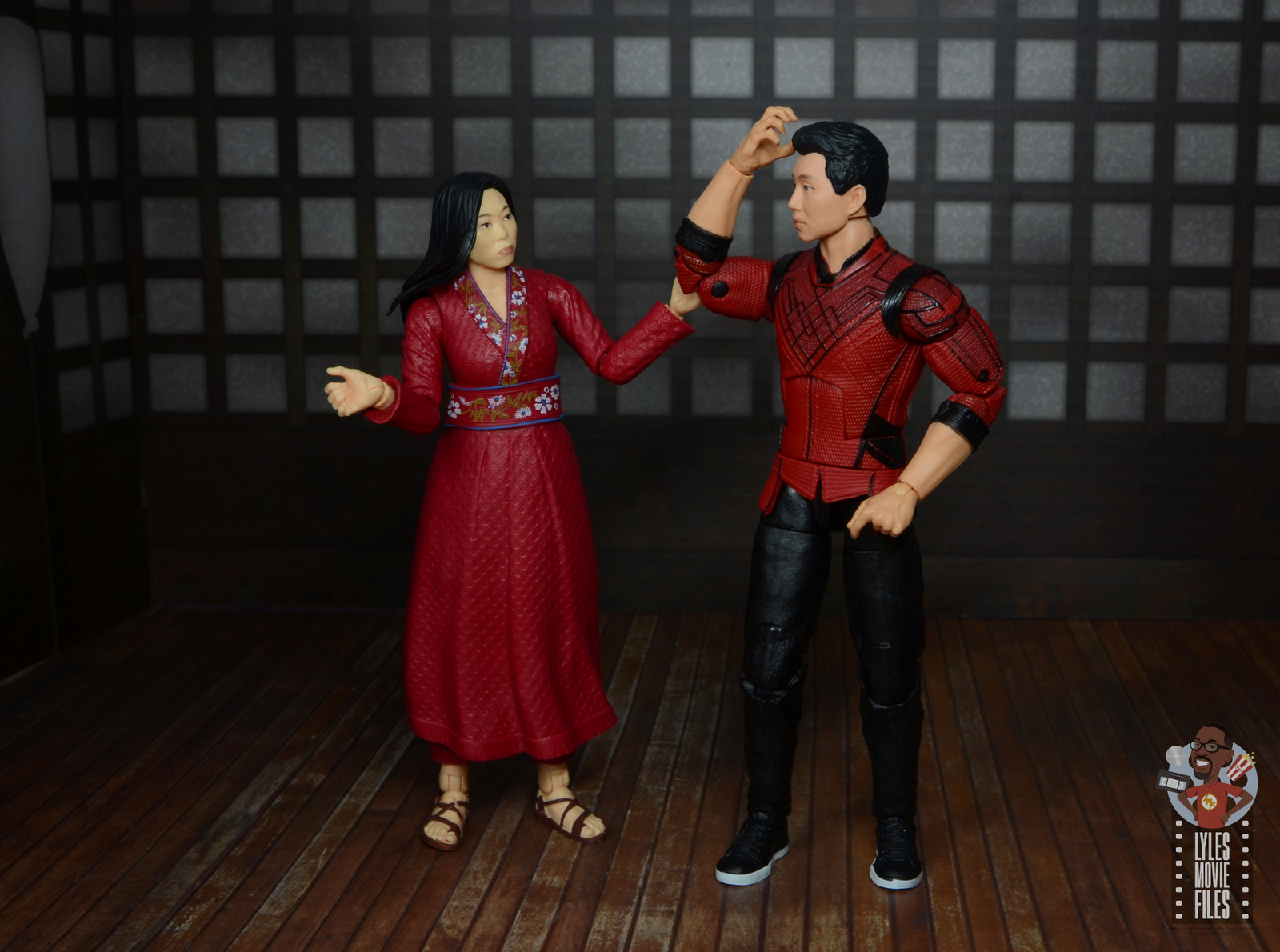 Paint:  Hasbro carried the strong work on the figure with the paintwork.

The flower detailing is impressively precise at this scale. Hasbro has mastered the face printing work and the eyebrows, eyes and lipstick came out very nice. 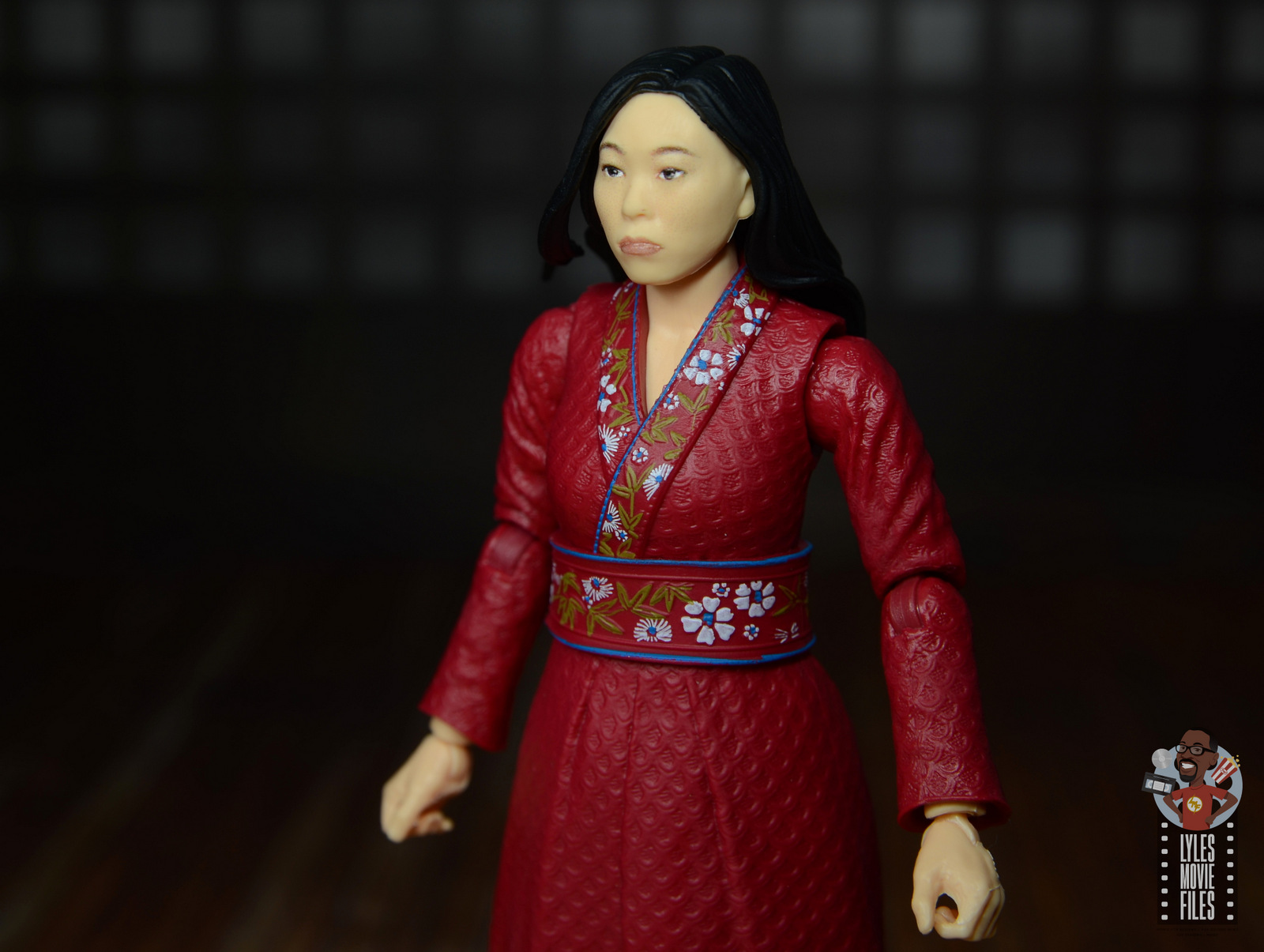 Scale:  Katy is shorter than Shang-Chi and about the same height as Xialing.

Articulation:  Katy is definitely not much of a fighter and kind of randomly discovers she’s good at archery. The gown as you’d expect doesn’t allow for deep or wide stances, but she can hit some decent long-range archer poses. 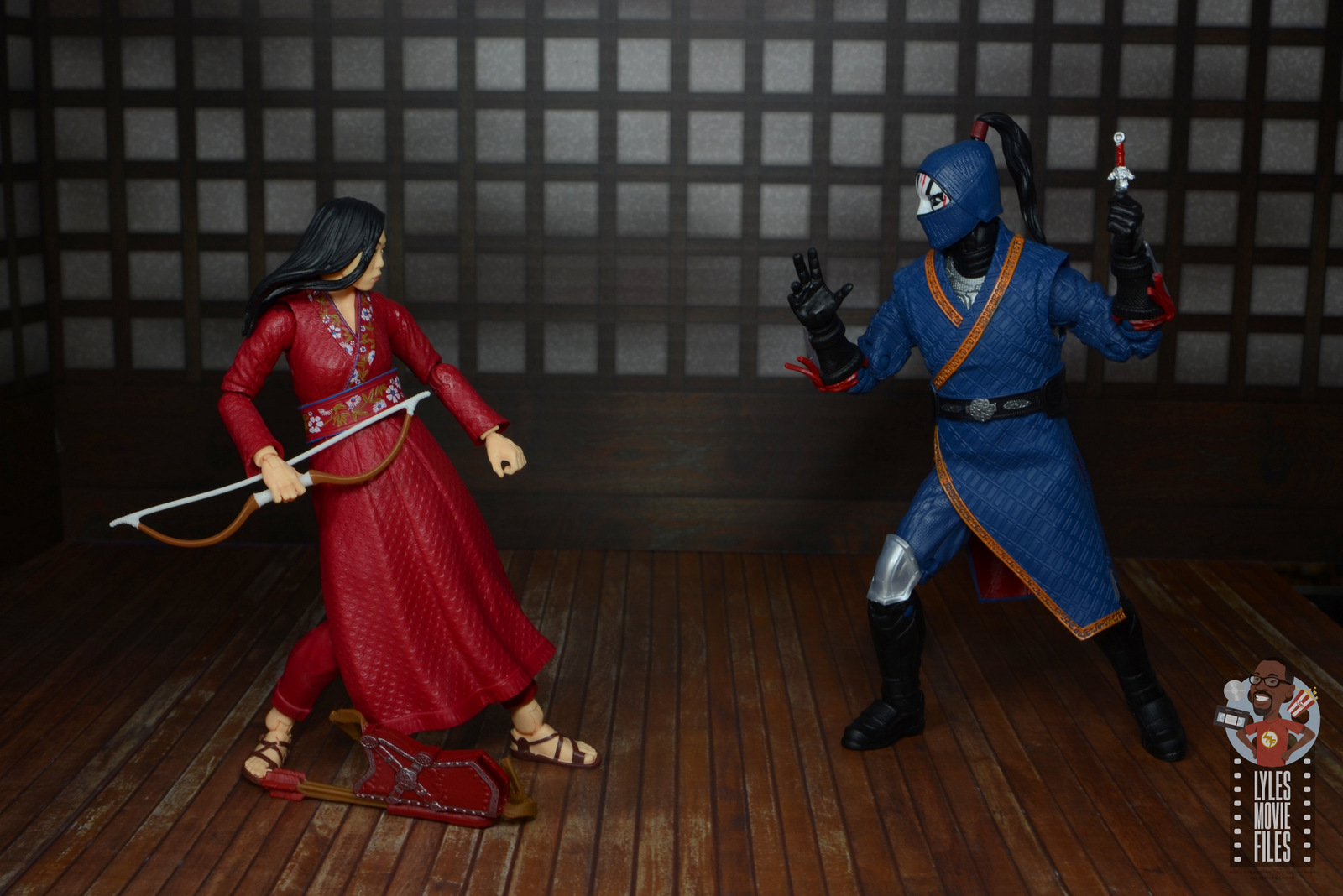 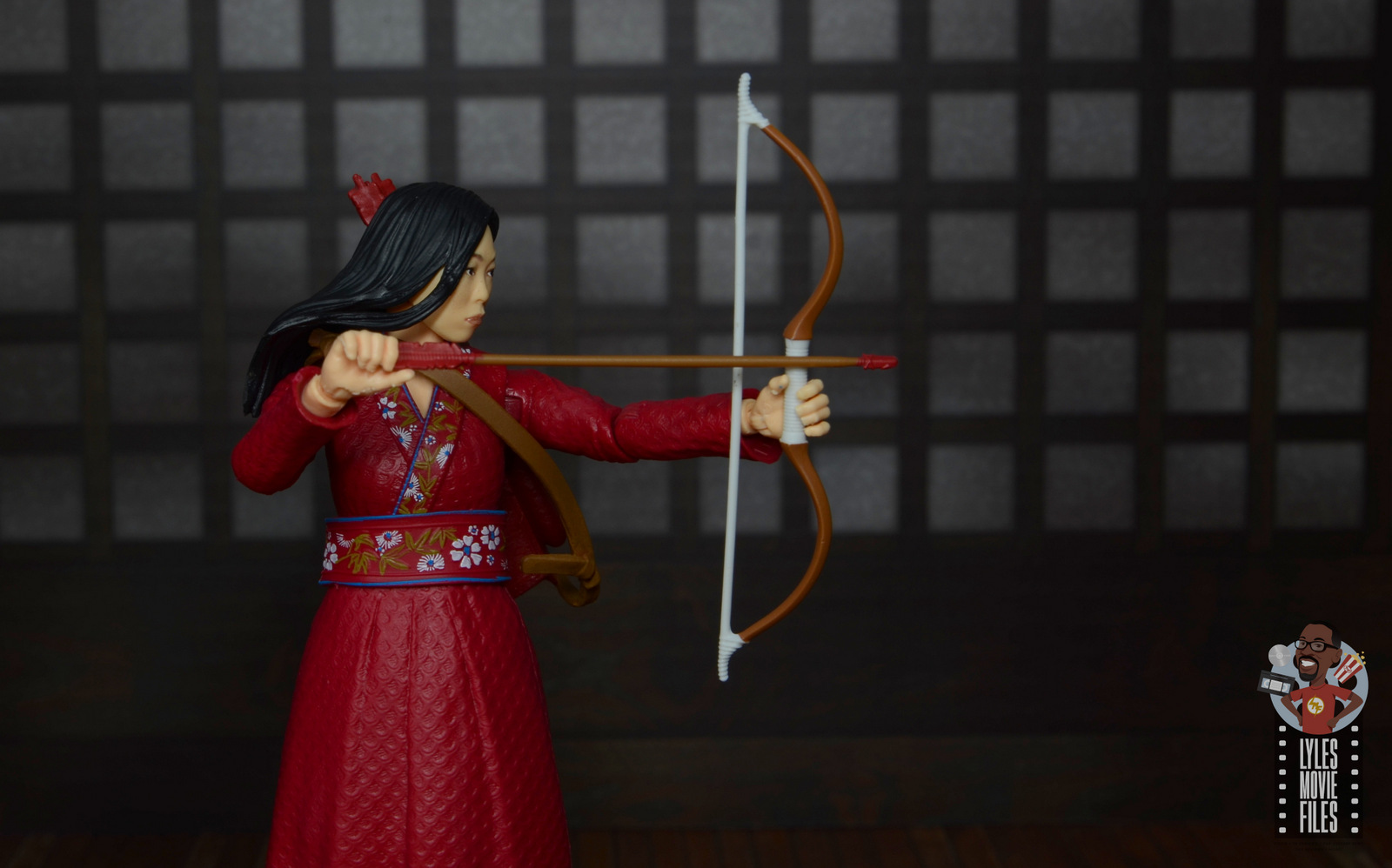 Accessories:  Katy comes with one arrow to place with her bow and the other is a set of arrows bunched together to fit in the quiver. 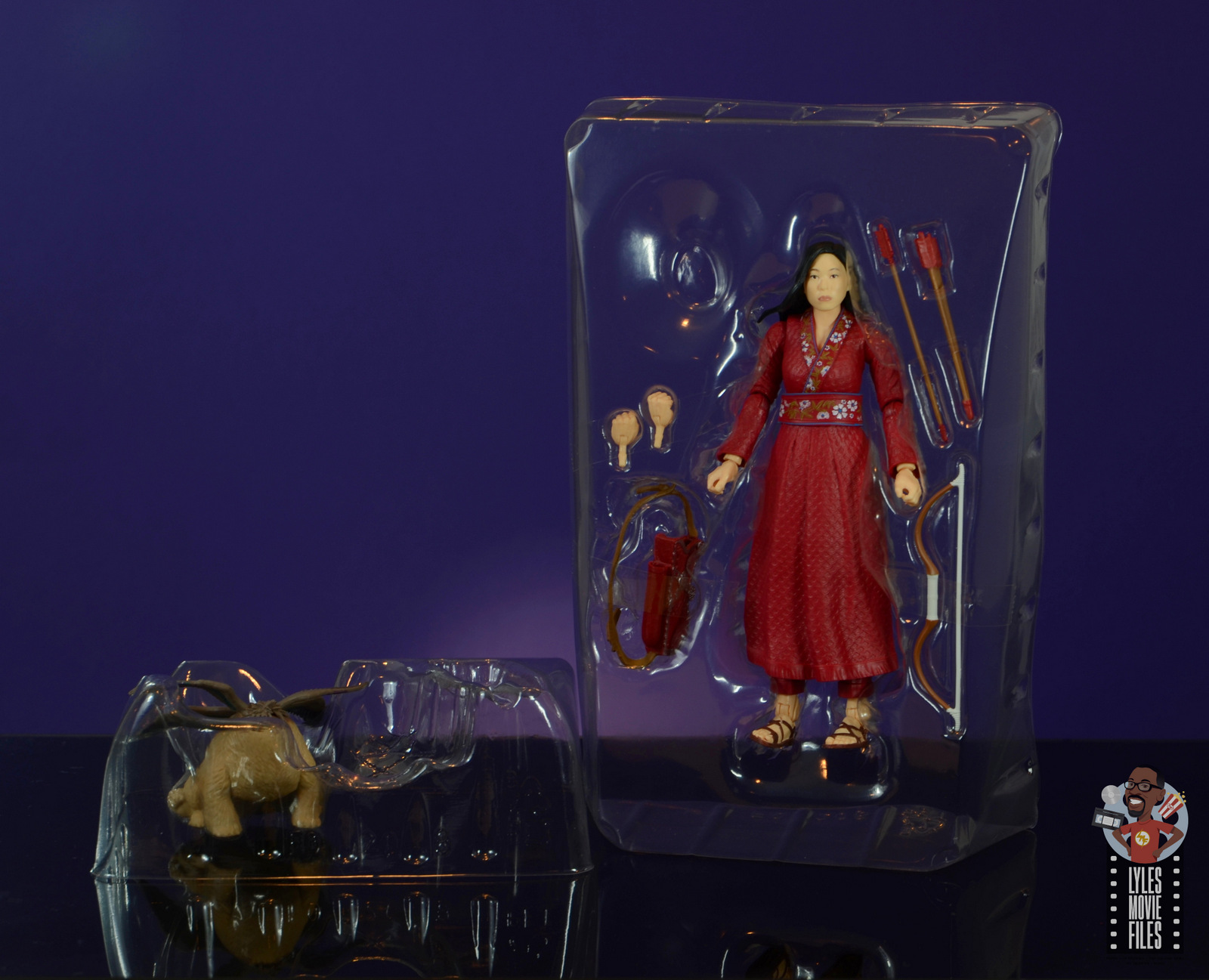 The quiver is really well done with nice sculpted elements and paintwork. Her bow looks a little cheesy with the white bowstring.

Additionally she comes with a swappable set of fists that switch out with no problem from the gripping hands. 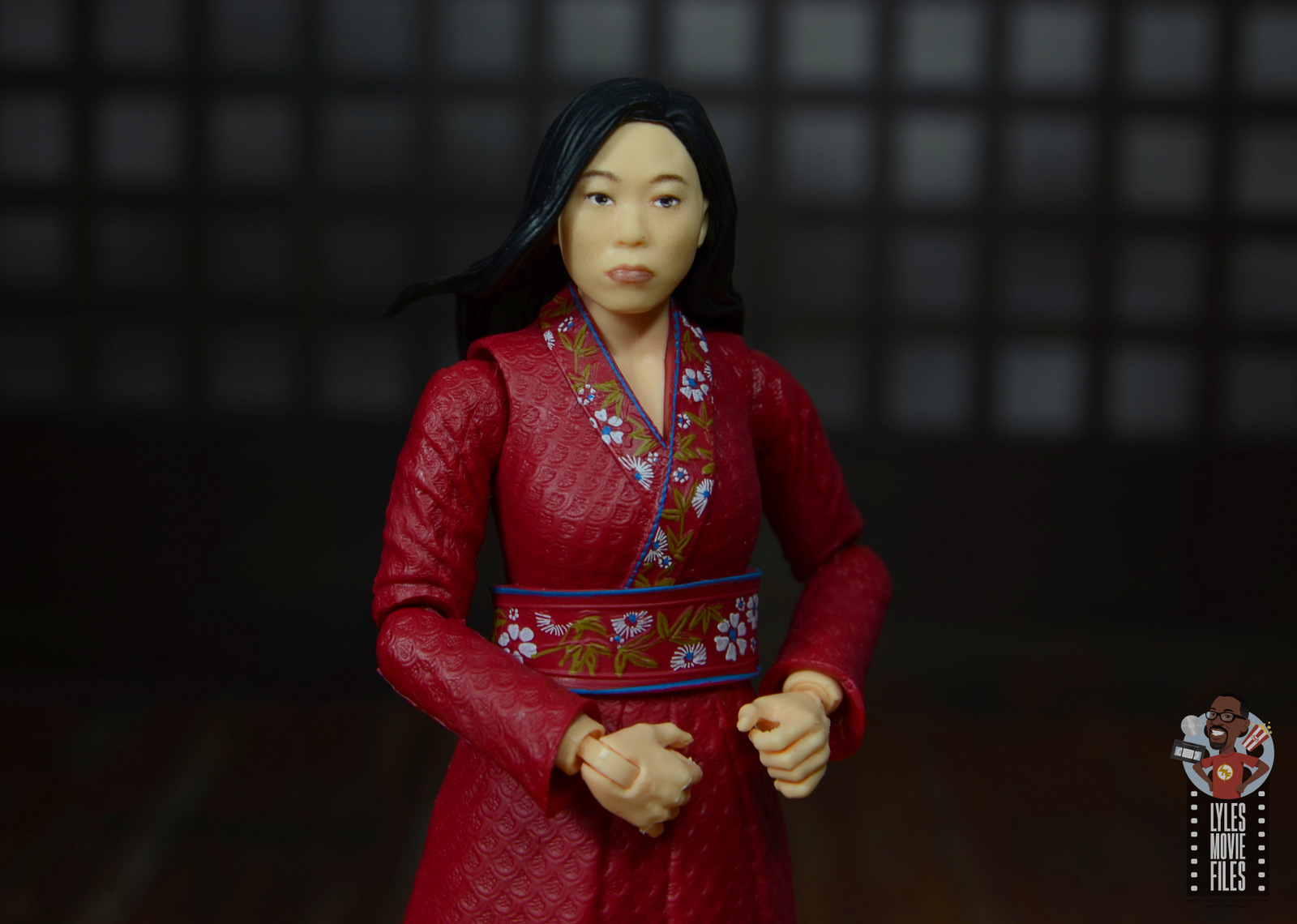 Finally, she comes with Morris, the fluffy semi-flying scene-stealer that was hanging out with [spoiler]. That’s a nice additional pack-in in lieu of a Build-A-Figure part. 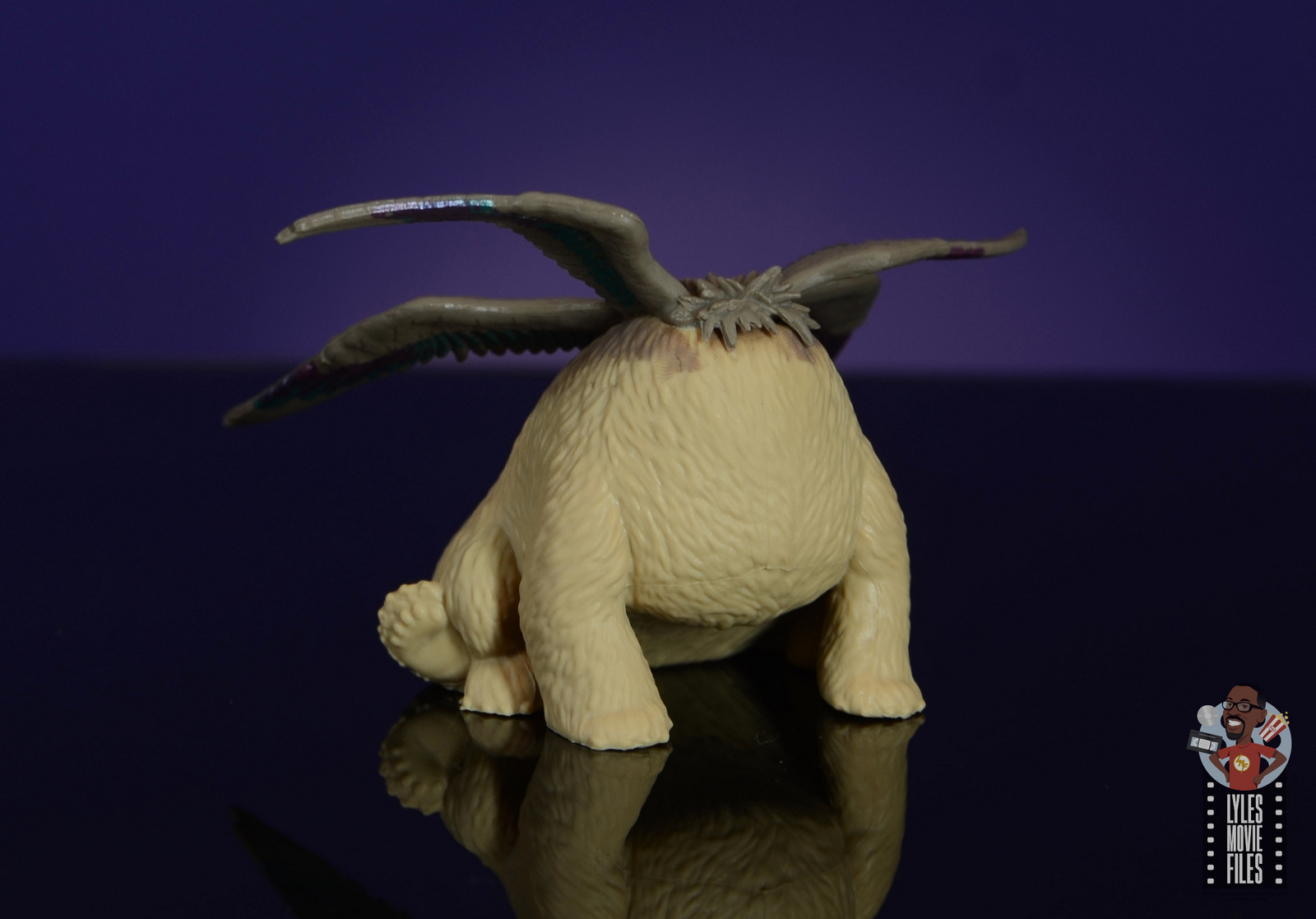 Hasbro actually took the time to add in the multi-colored inner portion of his wings. The paintwork on my figure was a little sloppy, but I appreciate it. 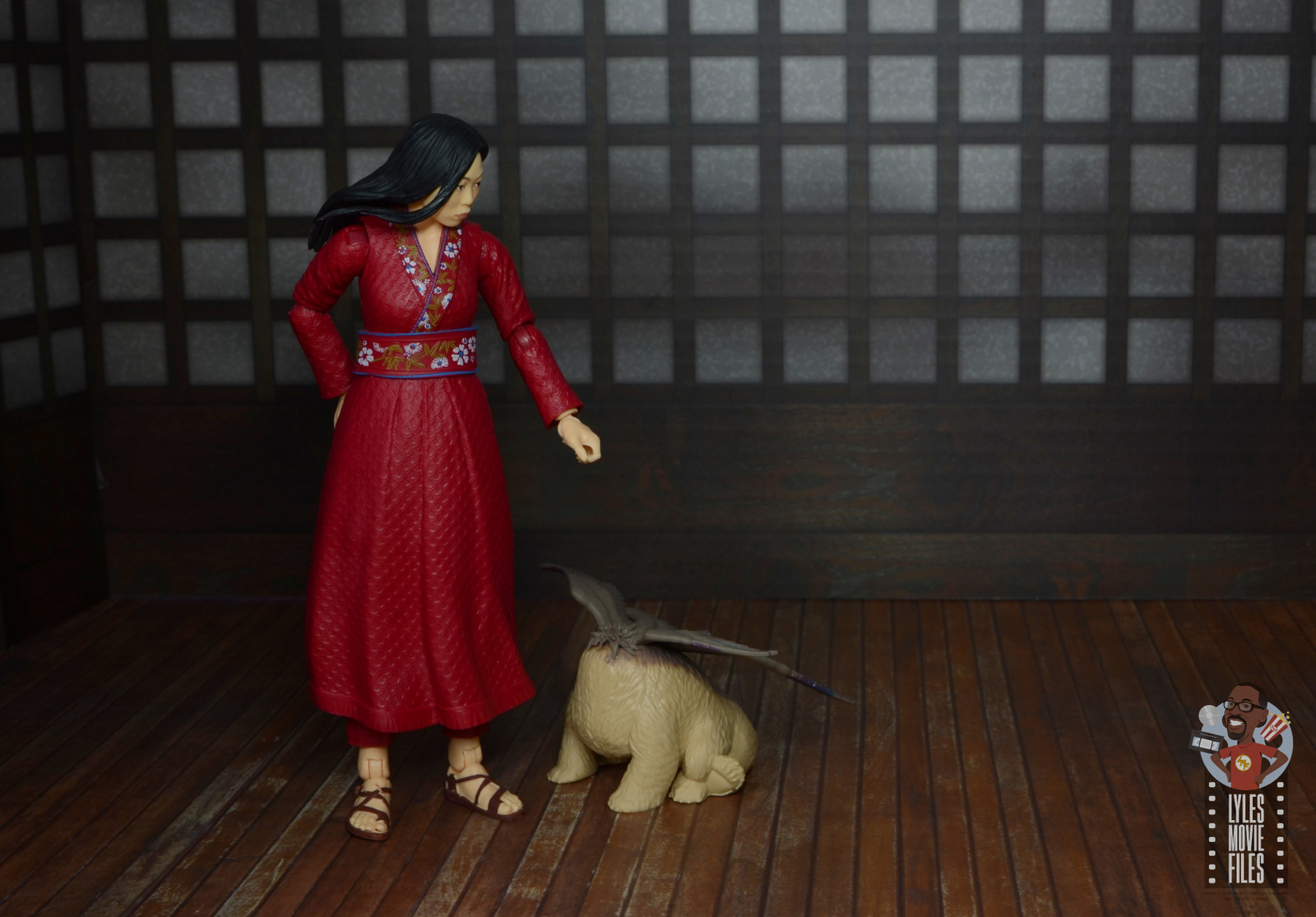 Worth it?  The main selling point for Katy was her $7 price tag. Paying the original $21 price tag for her was a non-starter. This was a much better price for a figure I can make a generic background character. 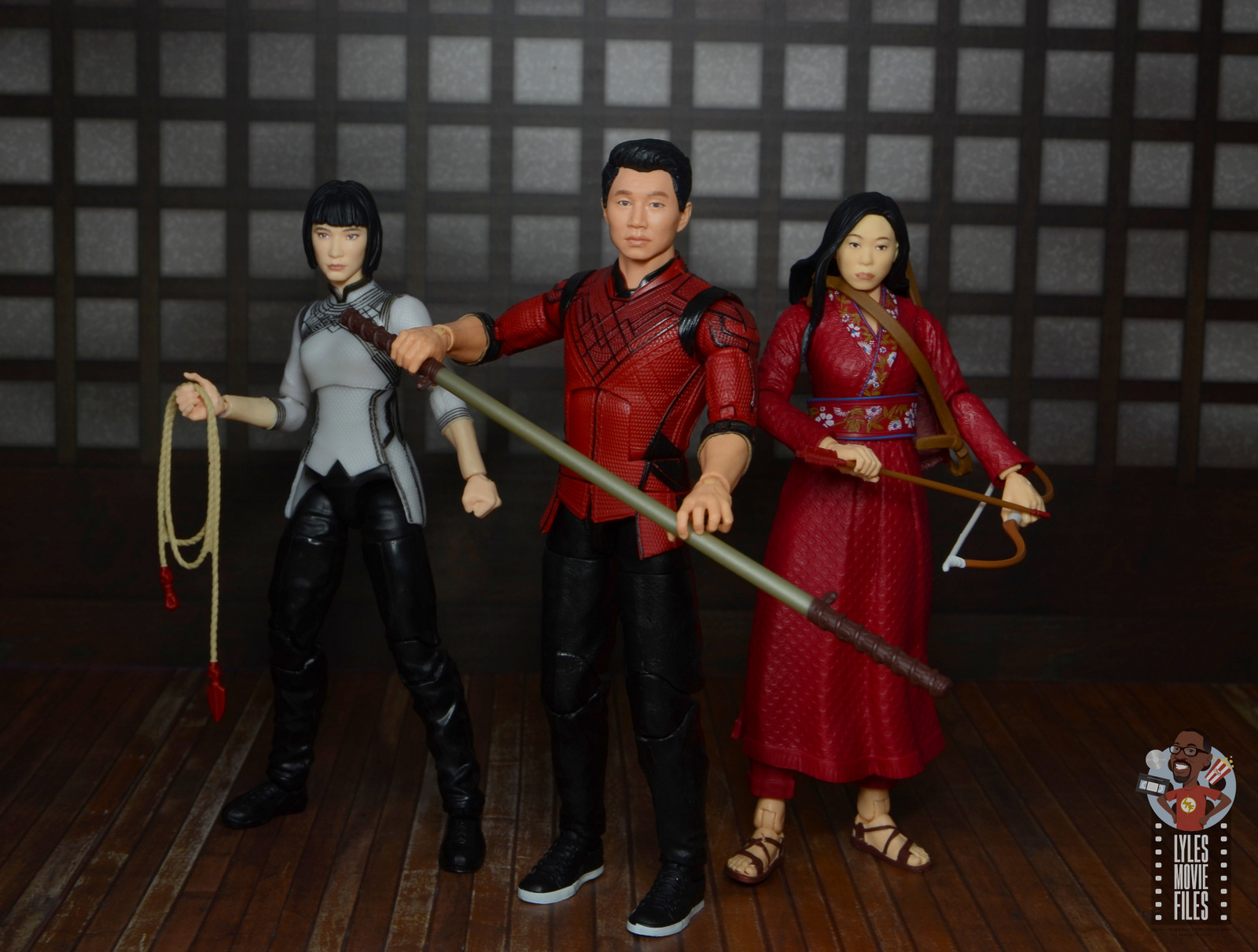 Katy’s battle attire probably isn’t the main look some Shang-Chi fans would prioritize, but it’s another nicely done figure that makes the Shang-Chi figures a perfect 5 for 5. 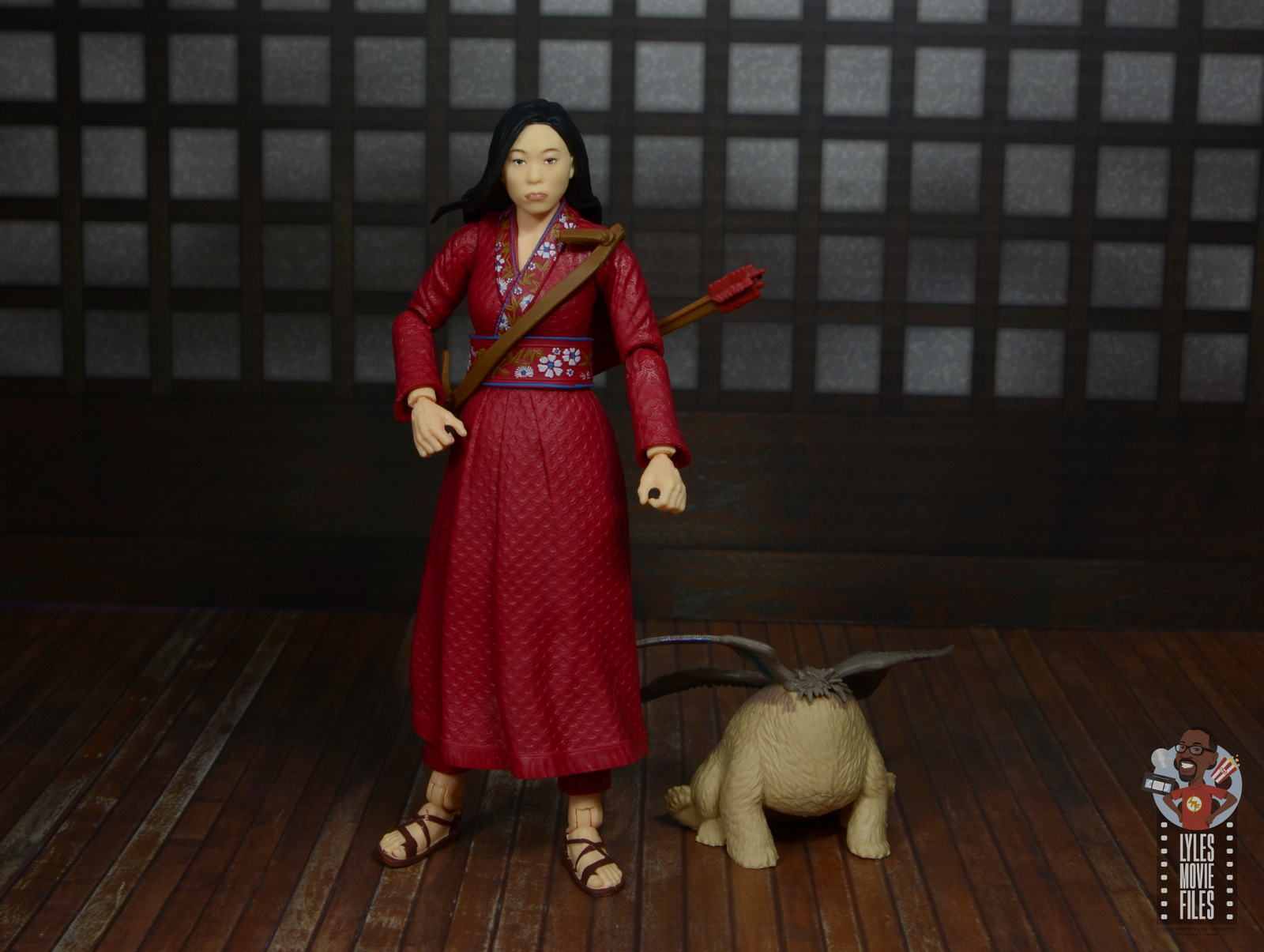 Where to get it?  You might still be able to find Katy at the clearance section of some of your local Targets. She’s exclusive there so you won’t find her at other retailers. You can grab her from Amazon.