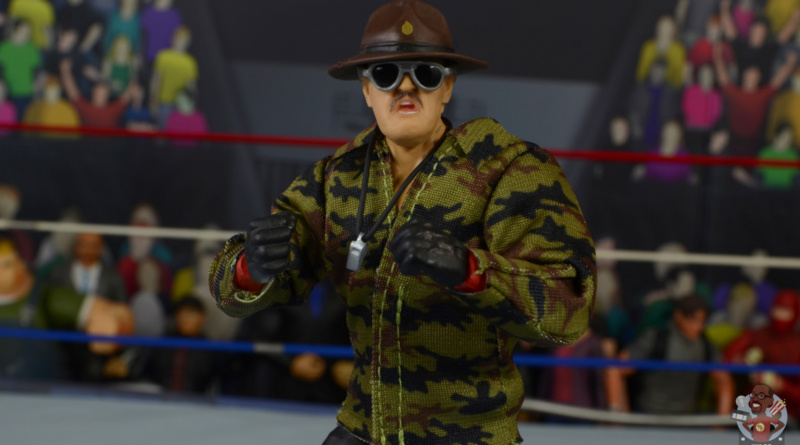 At ease maggot. Time to break down the Sgt. Slaughter Ultimate Edition from Mattel. I’m not sure if there was a better crossover character than wrestler Sgt. Slaughter joining G.I. Joe.

With a Classified Series figure from Hasbro seeming unlikely for awhile, Mattel came through with this G.I. Joe style version of everyone’s favorite drill instructor.

This is Mattel’s WWE San Diego Comic Con at home figure, which means he gets another level of special treatment. Sarge is also the first exclusive Ultimate Edition figure, which not so surprisingly made him a very in demand figure. And that’s not even including the chase figure. Alright, fall in line and let’s see how this figure shapes up.

Packaging: As always, Mattel goes for the win with the con exclusive figures. And this remains the lengthiest packaging I break down for any line because it’s consistently so well done. Last year’s exclusive Mr. T was done like a Coliseum Home Video VHS box.

Lifting the tab on the left side reveals a Cobra Clutch message and a red panel with the LJN style font. This opens to a three part gateway with members of the Mattel team (including Steve Ozer and Bill Miekina) immortalized as crowd members with Sarge appropriate signs.

The figure card actually lifts up so you can preserve the box casing. It’s really nicely done with the full drawing of Sarge and the classic LJN colors and backdrop. 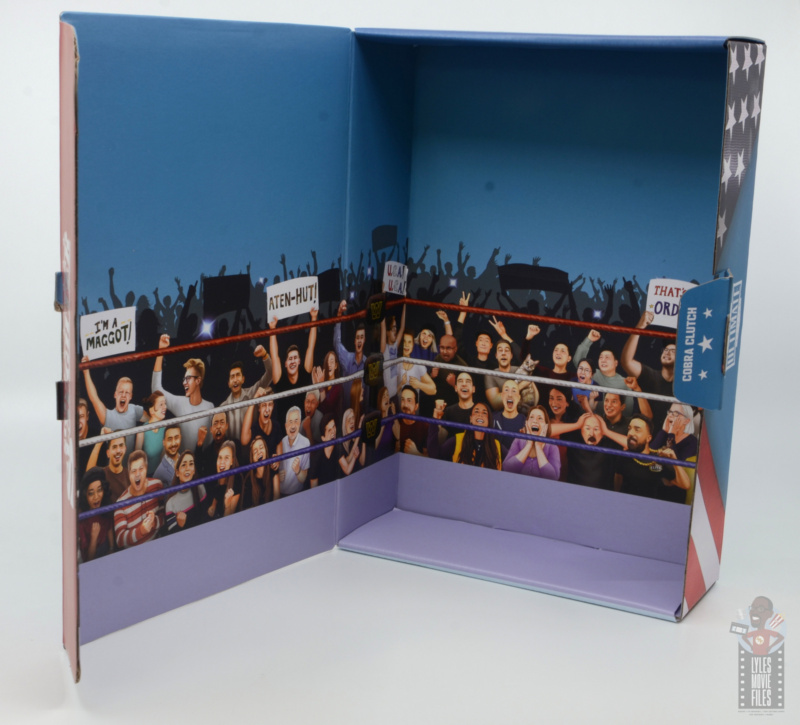 Mattel also didn’t use any tape or sealant on the card so you simply raise the plastic and pull the figure out. On the front there’s a message that the accessories are included. There’s in the stage stand Sarge is atop. 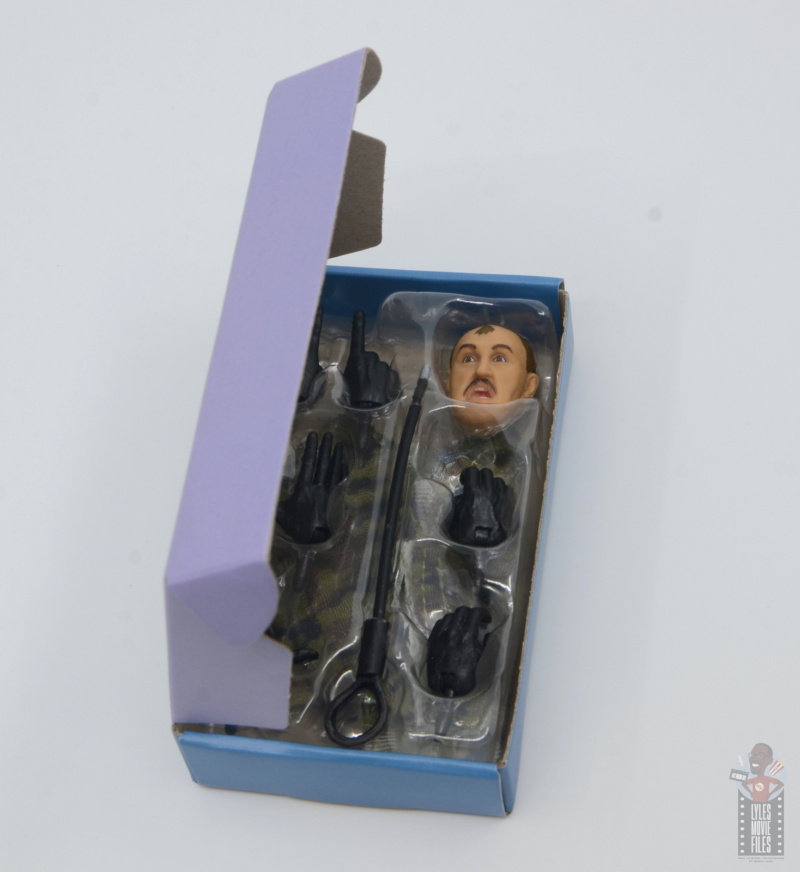 The back of the package breaks down the various accessories along with a bio done in a clip card file. That’s a nice touch. Copywriter Robert Rudman always earns his pay with these terrific character summaries that’s done in a playful and iconic manner. 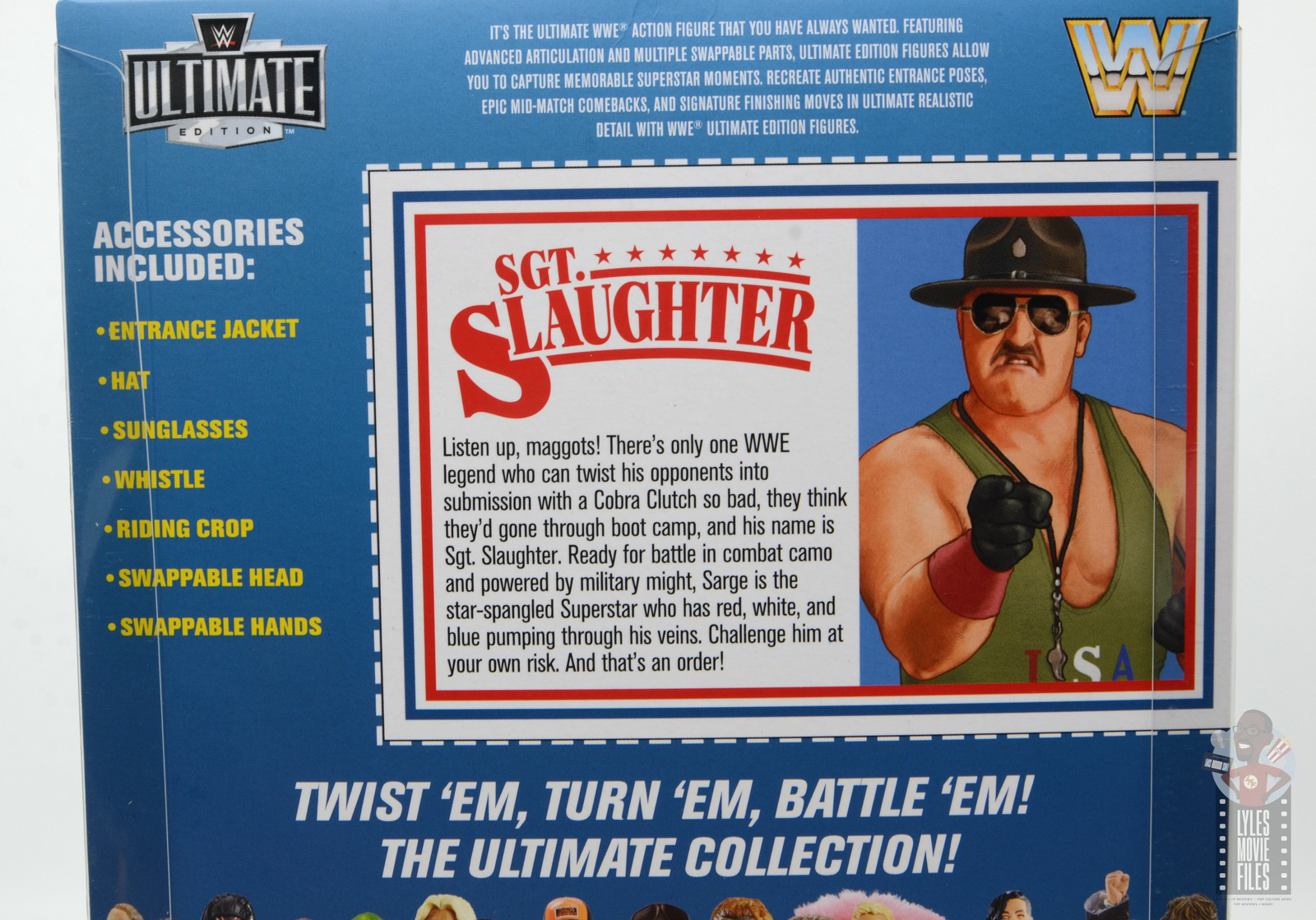 On the bottom we’ve got a shot with Sarge and the other UE figures so far. I’ve got all but six. Not bad.

That’s non-existent here as Mattel designed the torso parts to eliminate the gap. It really makes a huge difference. Mattel hasn’t gone too far in the line that it’s not too late to release older figures with this improved aesthetic (and butterfly joints).

Sarge’s iconic jut jaw and chin looks tremendous although I always think Mattel scales Sarge’s head a little smaller. He was a guy with a large head and it’s just a smidge undersized. Ditto for the legs, which are a bit scrawny. 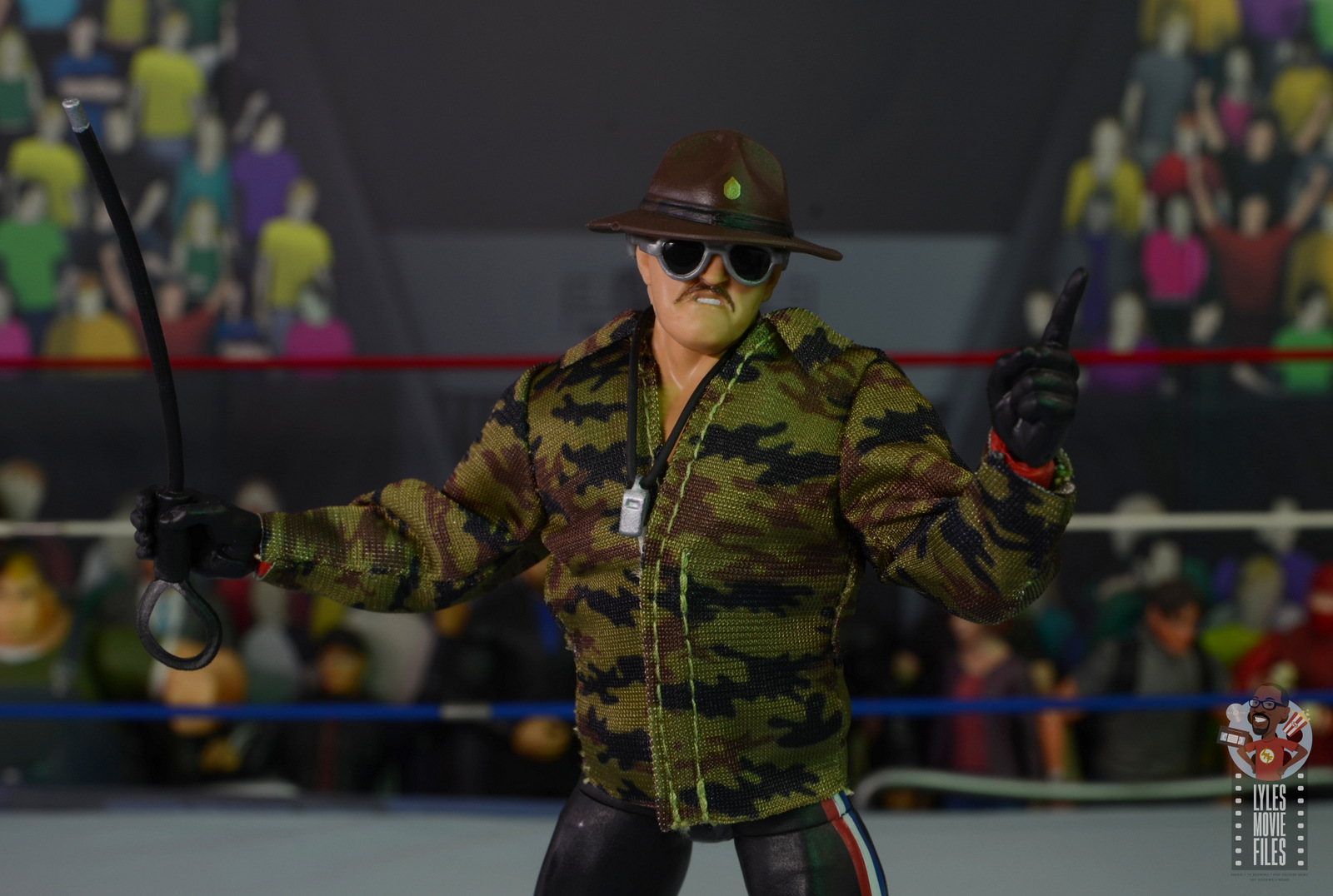 Either way, you can definitely see the upgrade with the TrueFX work on the UE Sarge compared to the Hall of Fame figure. 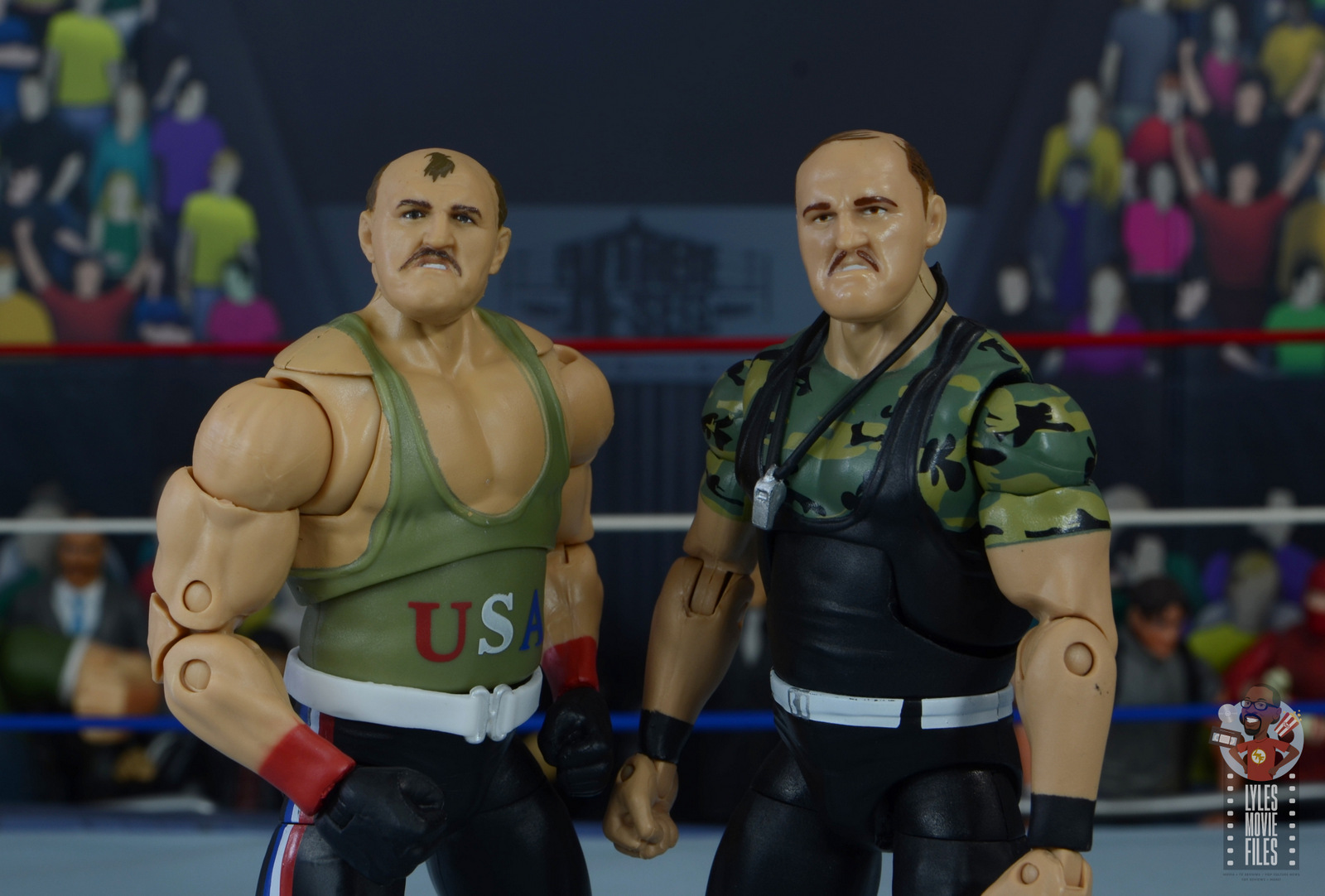 Scale:  Slaughter was relatively tall at 6’6″. He was one of the few guys to not be dwarfed by Hogan. He should tower over the 6′ Iron Sheik and the 6’4″ Nikolai Volkoff.

In truth, Slaughter really wasn’t fighting those guys in this attire. He was strictly an AWA guy battling the likes of Kamala and Nord the Barbarian. We’ve got Kamala and a Berzerker version of Nord and that’s close enough. Kamala was 6’7″ although Kamala’s bulk exaggerates the scale somewhat.

Paint:  Sarge is most famous for his black singlet and camo pants, but he also wore a white/blue combination like his first Legends figure. Mattel already delivered the black/camo attire and Iraqi attire is in Elite 89. This look is essentially the last major attire for Sarge, which is kinda cool.

The green is a nice olive shade and the USA lettering is nicely done in the respective red, white and blue colors. His red wristbands have the appropriate amount of length so they’re longer than the normal versions. It’s not too shocking that the stripes along his tights are inconsistent particularly on the red and white sections.

Sarge’s staff sergeant placeholder logo on his boots is about as close as Mattel could get and that’s perfectly fine in this case. The effort is appreciated. 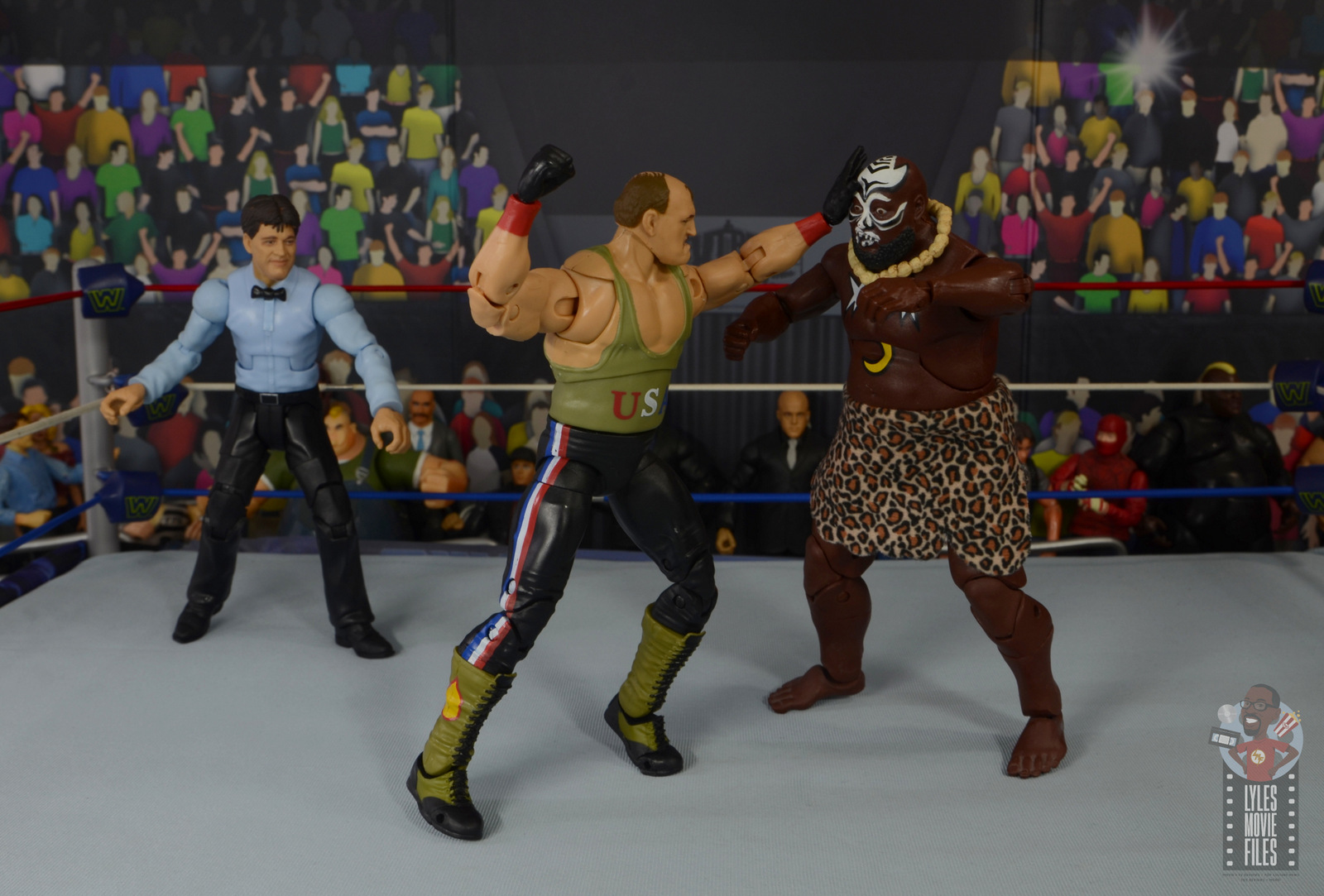 Articulation: Sarge was a brawler so the standard Elite articulation covered most of his move set, but the Ultimate Edition enhancements allow for better range with the Slaughter cannon lariats. 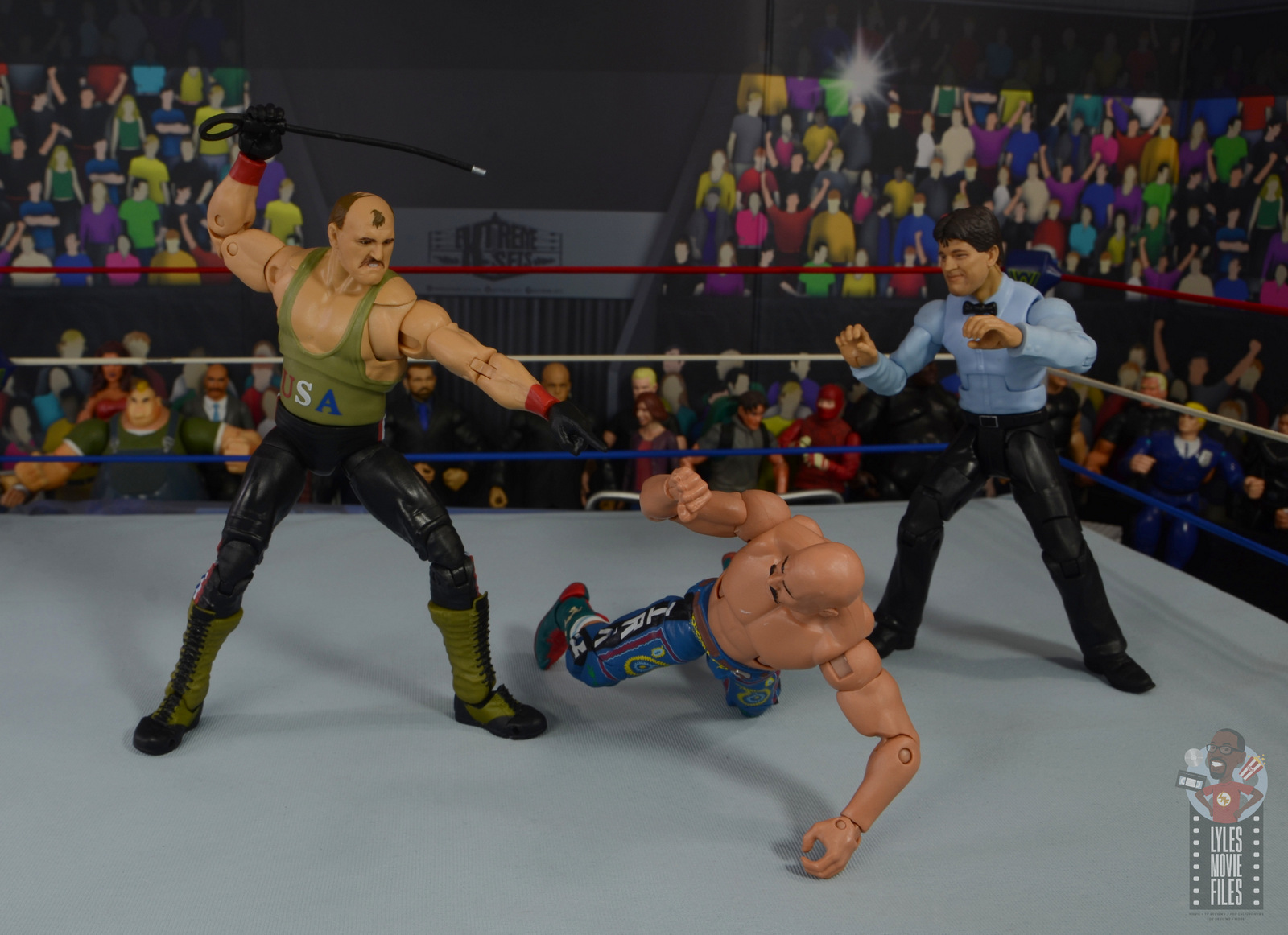 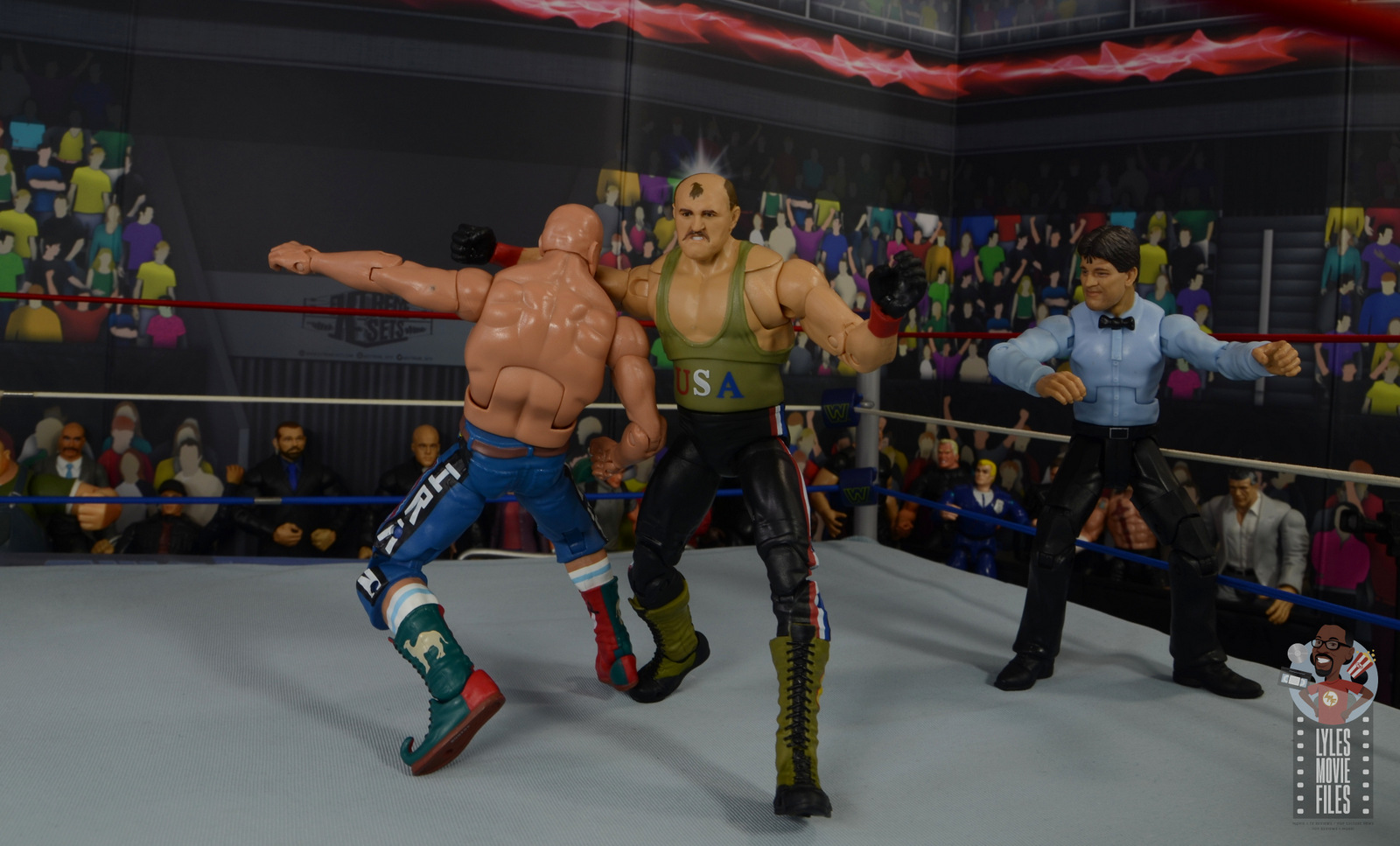 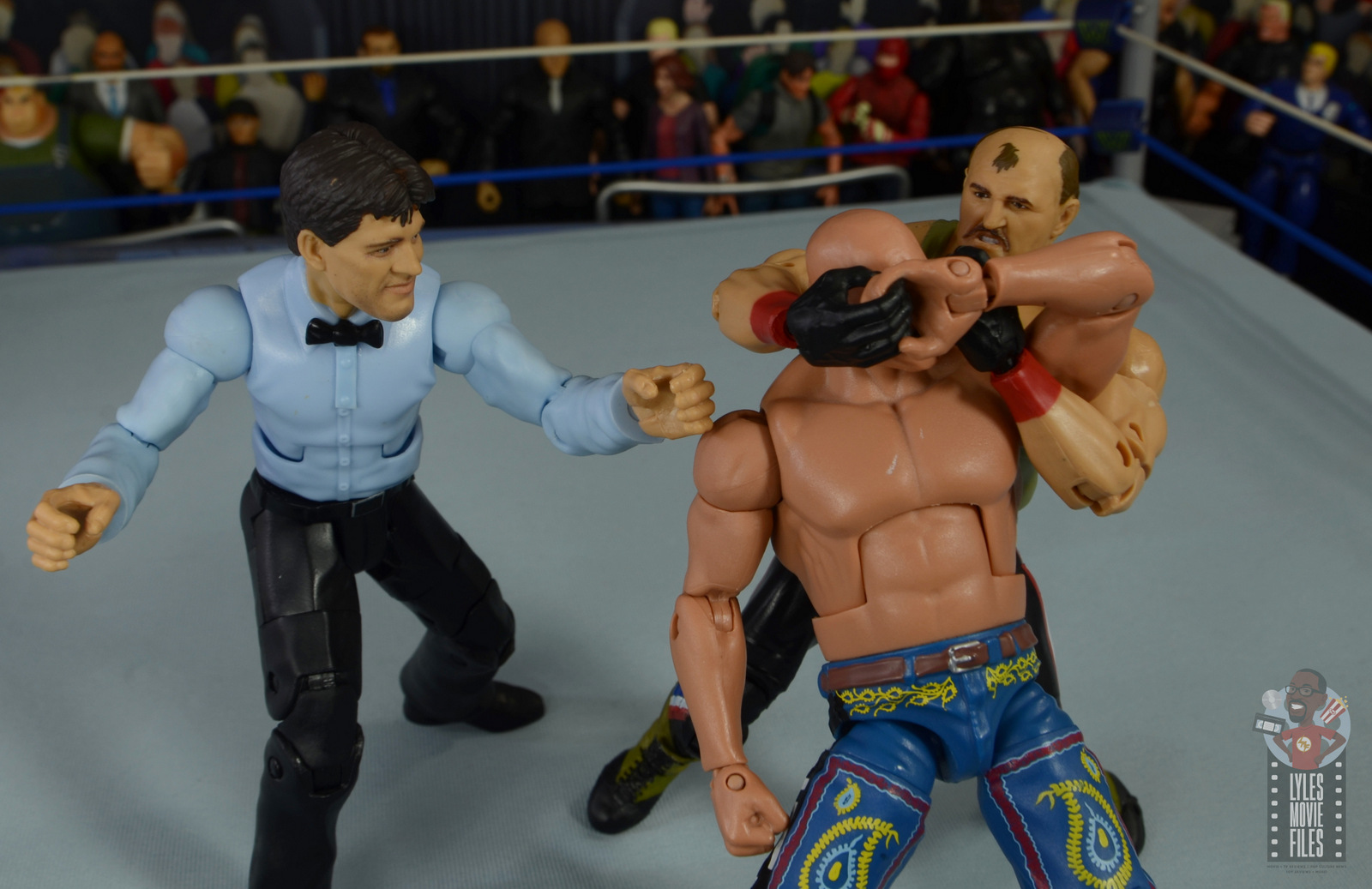 Accessories: Sarge comes with a swappable head. This one is more a stunned, surprised look although with the sunglasses on the head sculpt conveys more of him yelling or really focused so it works in that regard. 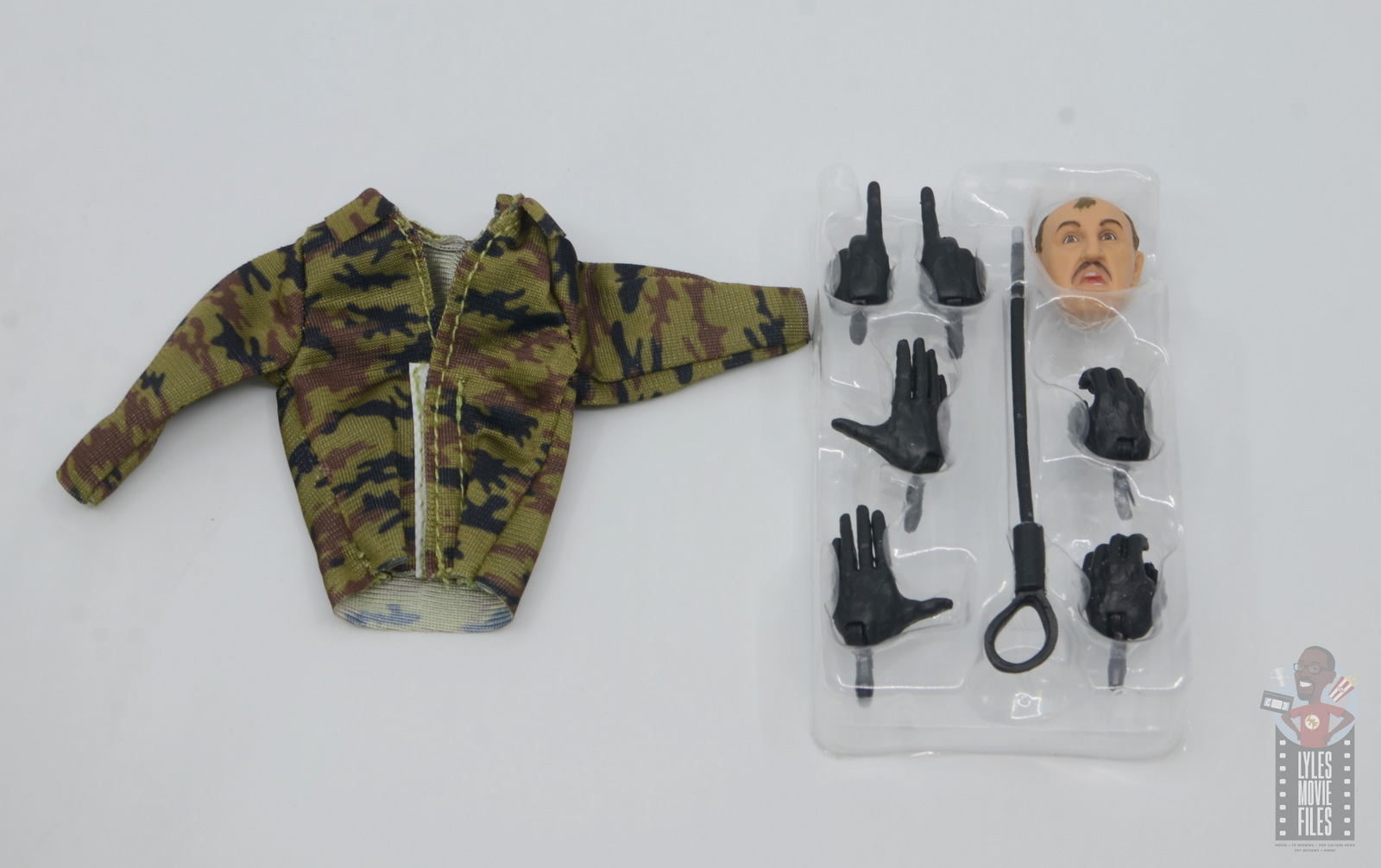 He also has his camouflage entrance jacket. The scale on this is just right as it’s not too baggy or too tight. 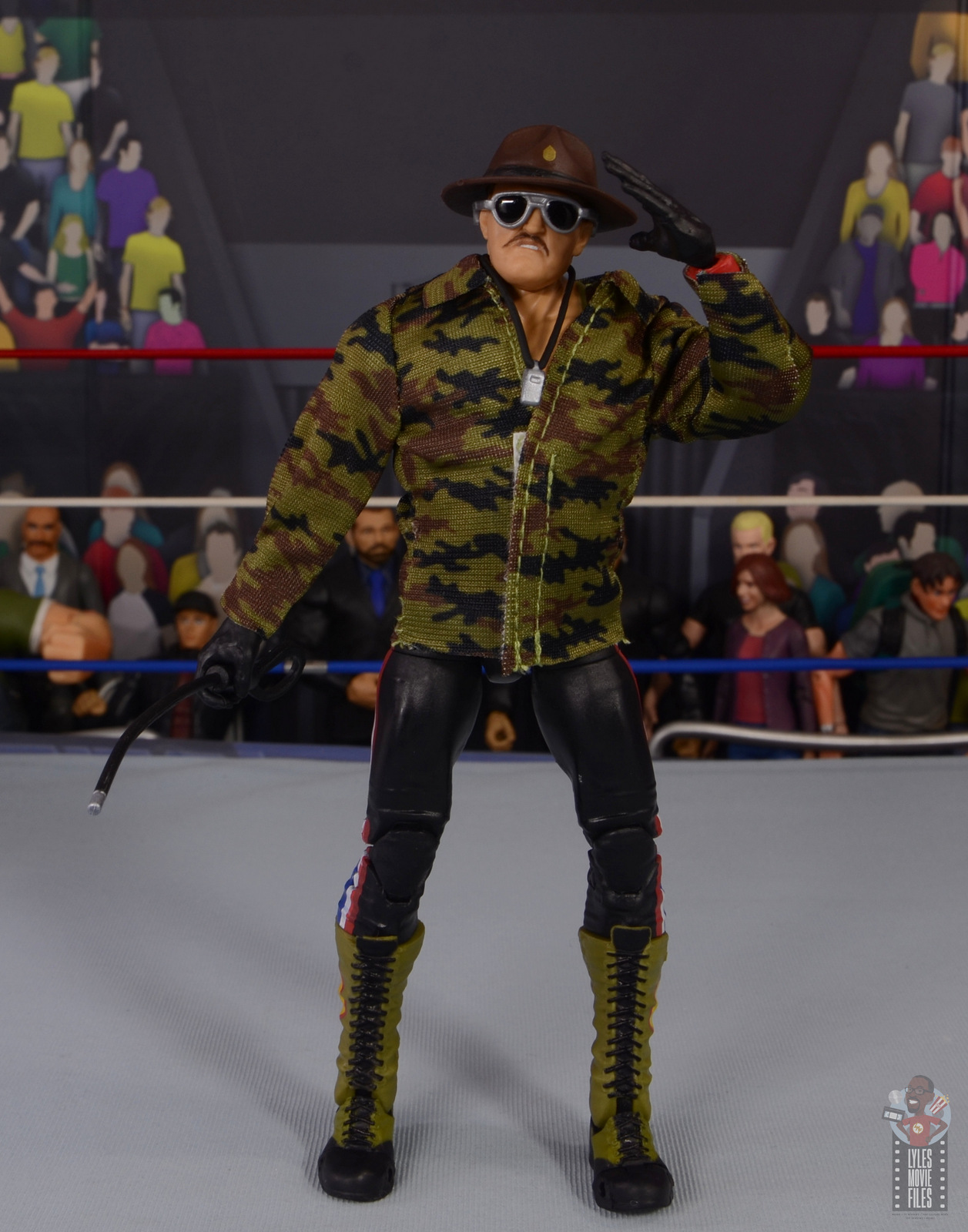 Sarge has three sets of extra hands — saluting, pointing and gripping. Those are all very useful additional options. On the smaller scale accessories front, Slaughter also has his whistle, riding crop, sunglasses, hat and the belt is removable.

Worth it?  Sarge was $35 — just $5 more than the normal Ultimate Edition figure.  The figure gets the usual UE treatment, but in this case the packaging really does make for a reasonable higher price tag. Of course shipping made him more expensive, but that’s the cost of mail away figures, right?

Sarge is a really great figure with a ton of useful accessories and an awesome package setup. Mattel needs to size up the legs of the UE figures to give them more bulk and size. I’m definitely glad I was able to add this guy to the collection. 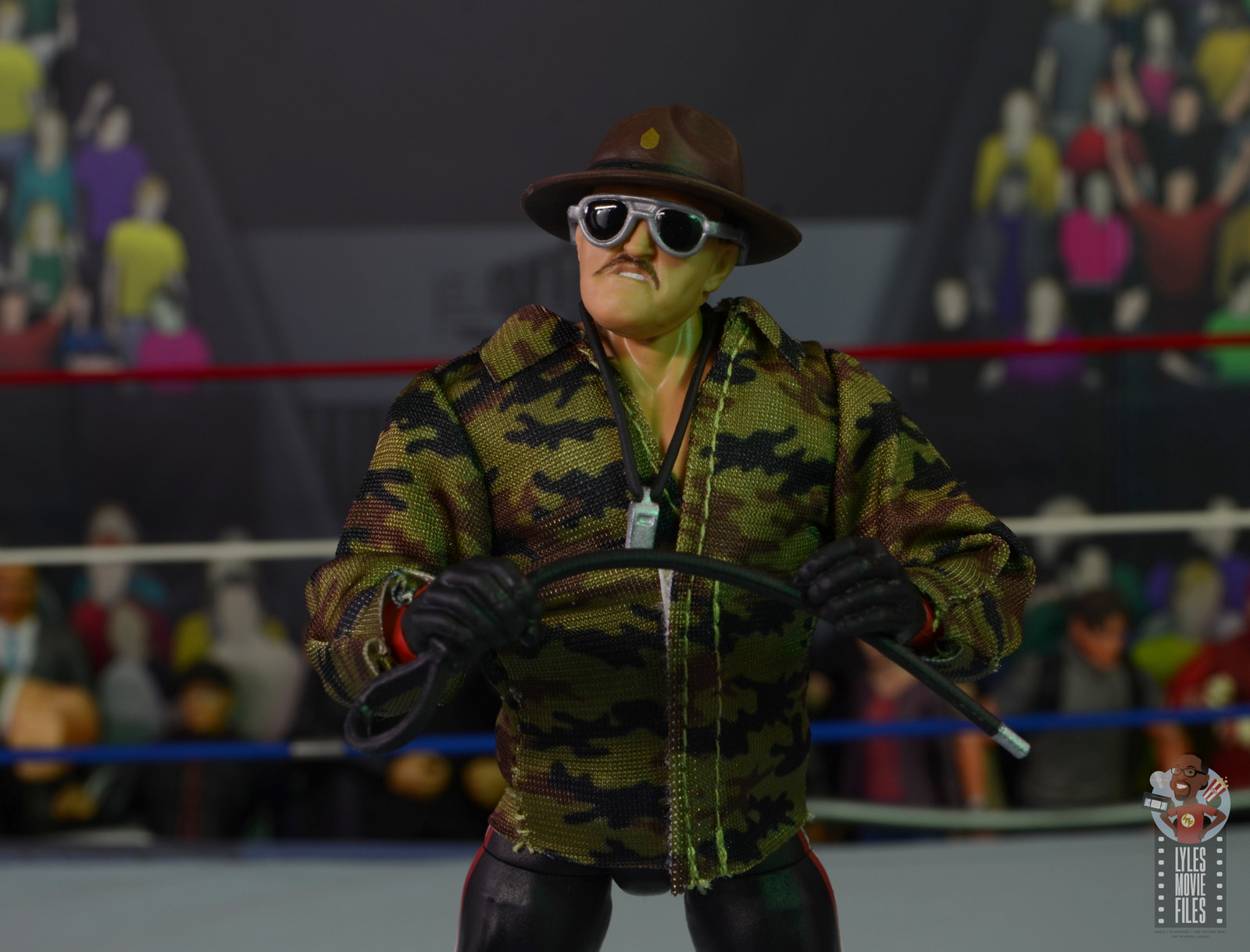 Where to get it?  Sarge was exclusive to Creations.Mattel.com and quickly sold out. Your best bet now is to hope some seller isn’t try to fund their 2021 holiday shopping with it.