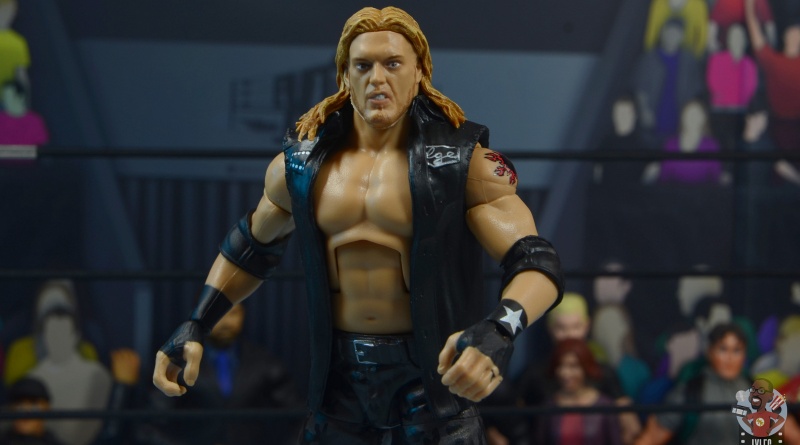 In his journey to becoming The Ultimate Opportunist and The Rated R Superstar, Edge had to go through heel main event route of passage with a feud against Mick Foley. This was the final step in Edge’s ascension to the top of the WWE and this feud culminated in a memorable WrestleMania 22 encounter.

As part of the WrestleMania Build-A-Figure Paul Ellering wave, Mattel decided to celebrate this matchup with this no holds barred hardcore match version Edge figure. Let’s see I’m gonna need some matches and a table after this one is done.

Packaging: As usual, the special event theme packaging is more visually captivating than the default line. The blue and gold gradients play very nicely against each other and the light blue backdrop showcases the figure and accessories well.

Edge’s portrait is his classic Rated R picture with slightly shorter hair than this match. The side and rear picture are from the match, which is helpful for reference. 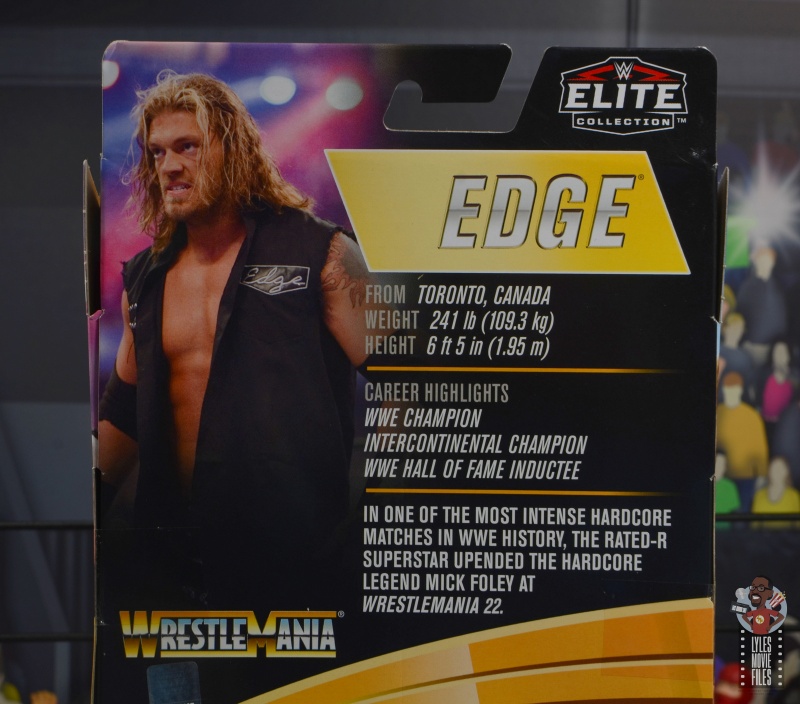 The bio, like most of these specialty theme waves, is very well done and always seems like it’s written in a way to encourage collectors to revisit the match. 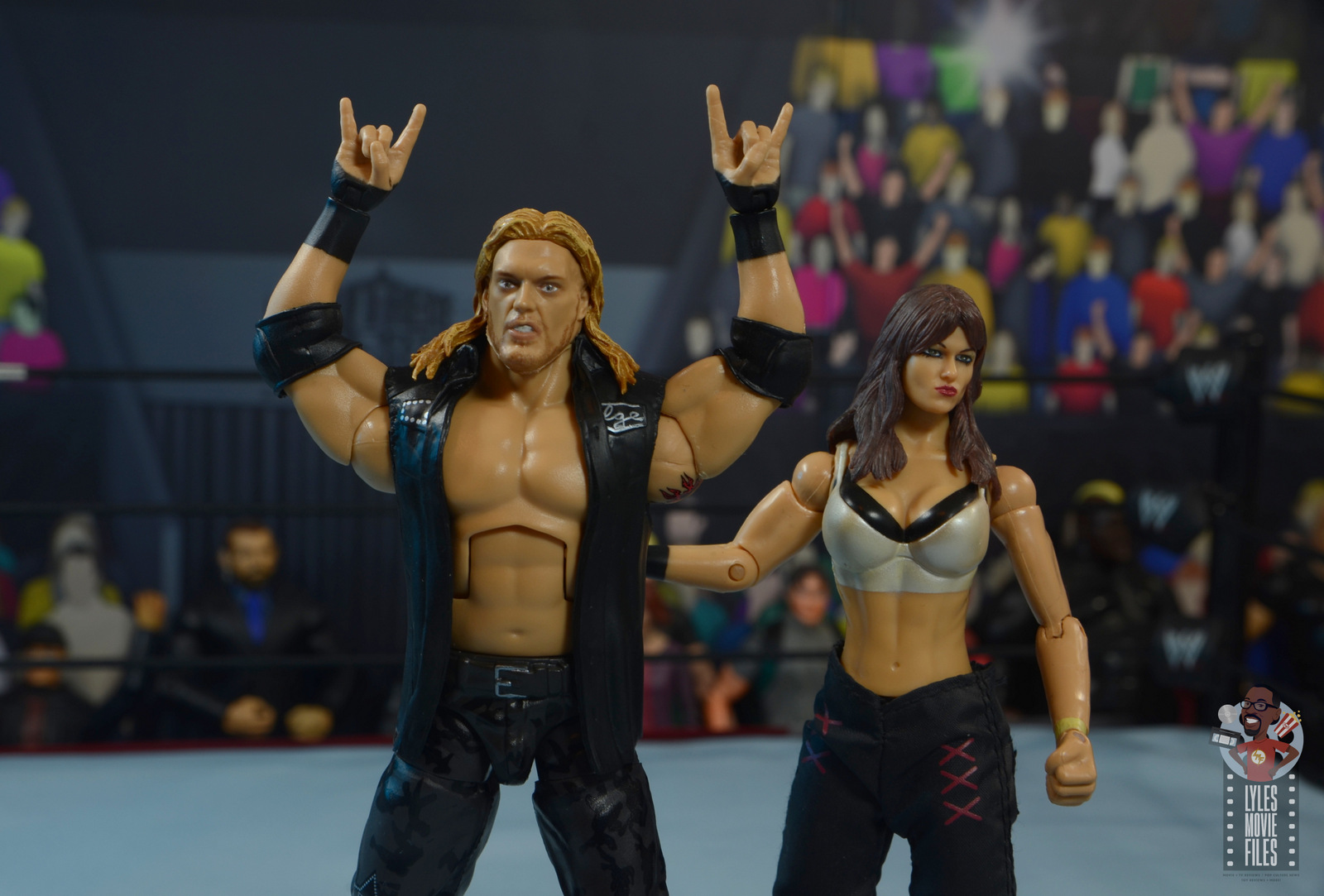 Likeness:  Despite the True FX scanning, Mattel has still struggled to capture a lifelike Flashback Edge. A big culprit here is the poorly executed hairline, which looks more like a hairpiece since it sits far too high on his head.

In many instances, it’s the head sculpts that hold the Edge figures back and that’s certainly the case here.

My figure also had a bad flash mold along his head. I’m assuming this isn’t the norm, but it is definitely distracting. 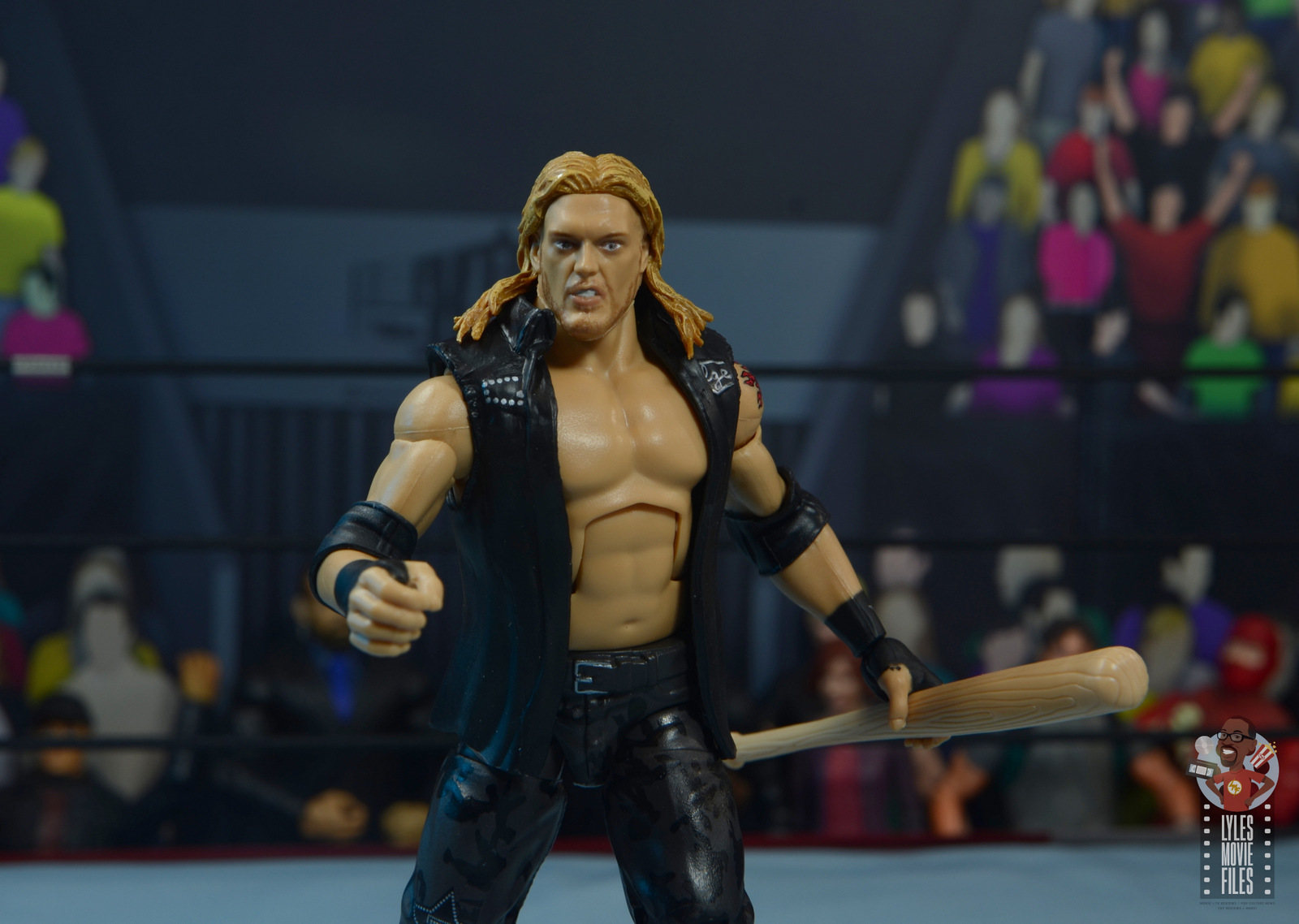 Edge dropped his trademark tights for this match and rocked camo cargo pants and a trucker vest to show he was taking this hardcore match seriously. Gear wise, he looks authentic to the match right down to the elbow pads and long black tape.

But for some inexplicable reason, Mattel went with a different torso for Edge giving him a bulkier, thicker body than his normal slender ones. This looks ridiculous and gives Edge a jacked up appearance without a neck. 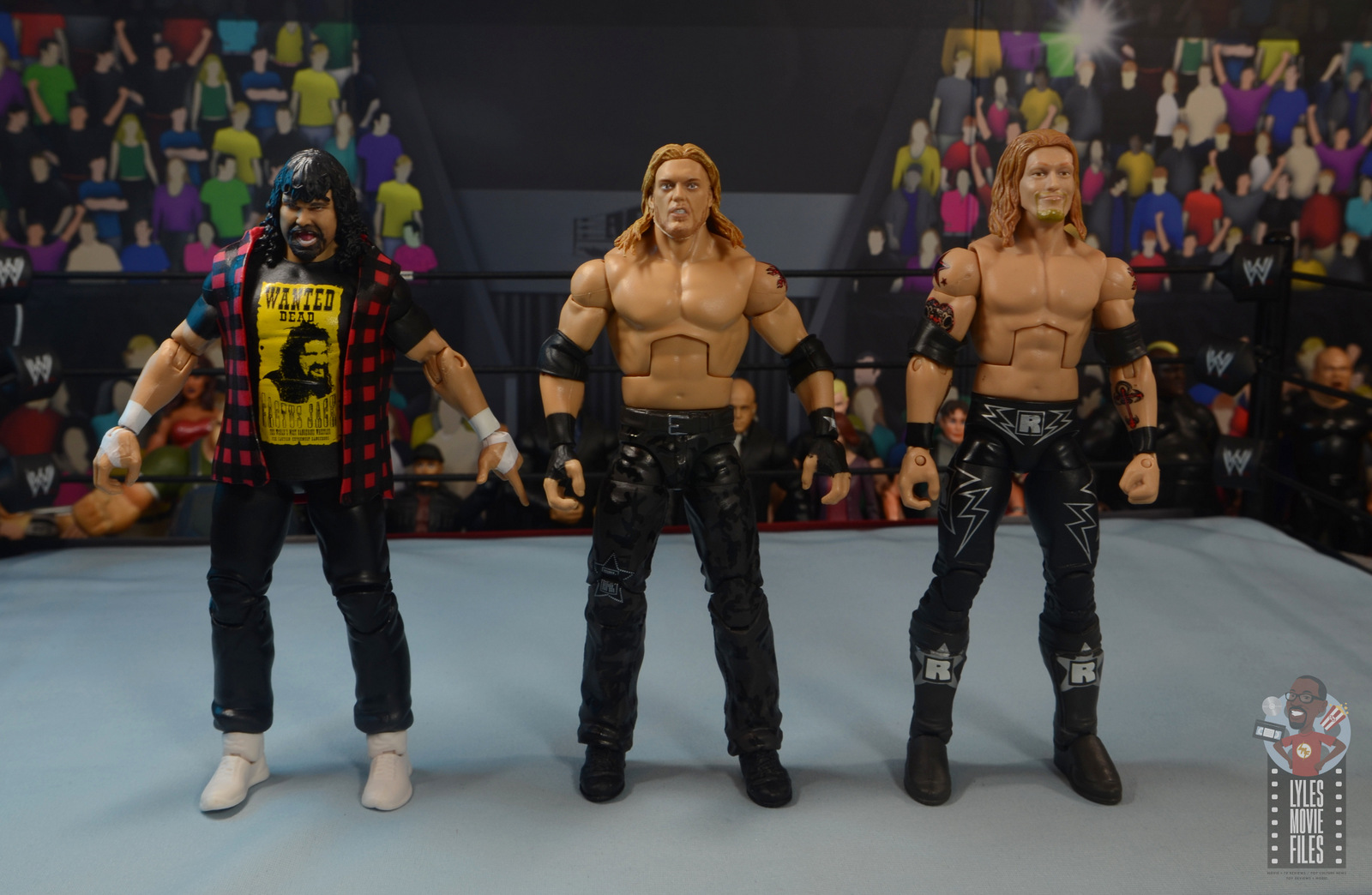 Scale:  Edge is 6’5” compared to the 6’2” Foley and his Rated R companion Lita at 5’6”. Considering this is a one and done style attire those are the only two figures you’ll need to match him up with and the scaling is just fine. 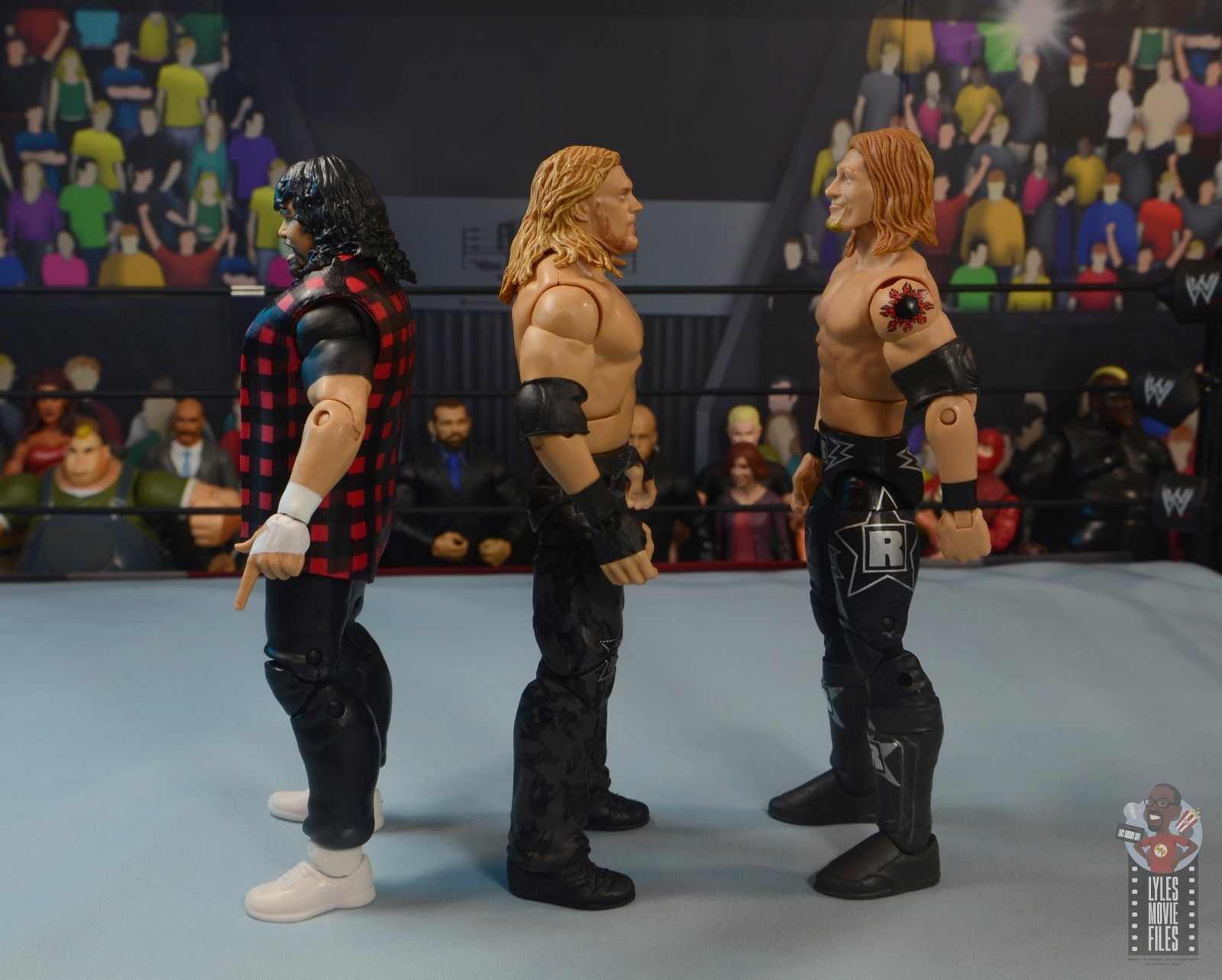 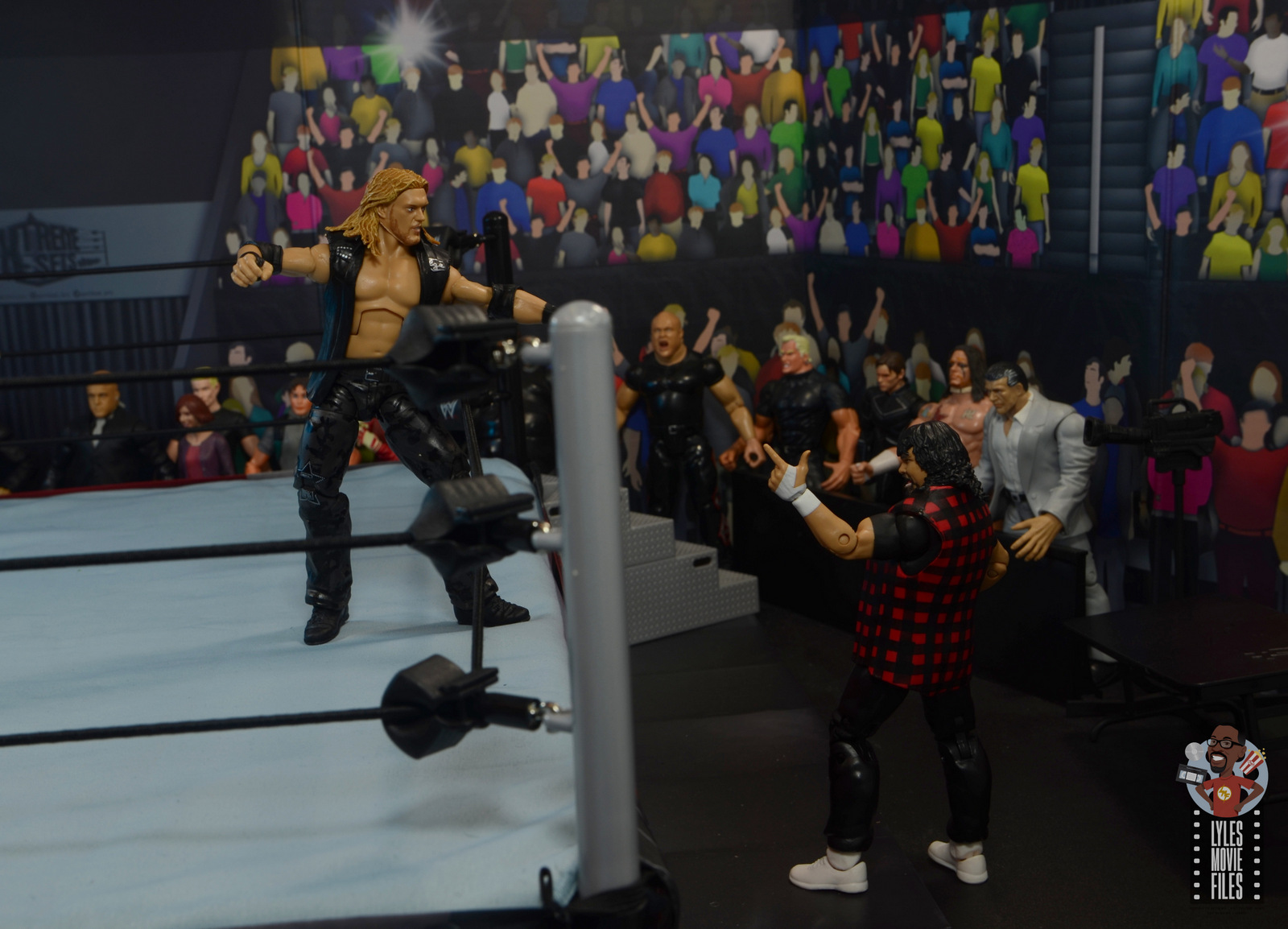 His hair has a decent wash although like many of the face printed figures there’s some random black speckling dots on the figure. On the plus side, Edge’s facial hair has rarely looked better.

Articulation:  Edge can hit most of his major moves with this Elite articulation scheme. I’ve gotta be honest and admit I was super disappointed when his Ultimate Edition figure was revealed as a modern Edge. 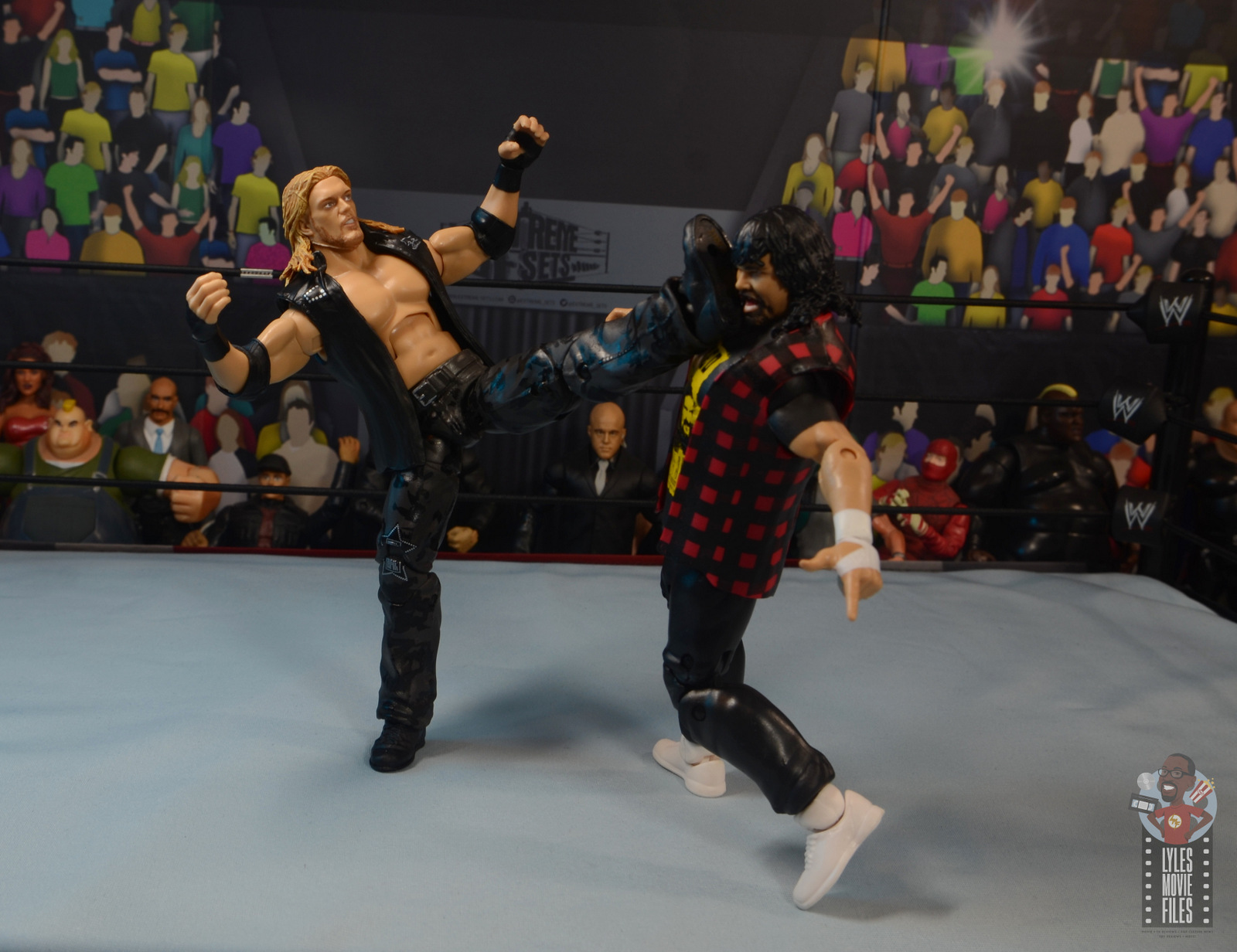 Rated R Edge definitely is a high profile enough player to warrant the extra articulation. So you’re not going to be able to effectively do a swinging the barbed wire or standard baseball bat in a way that looks all that great. 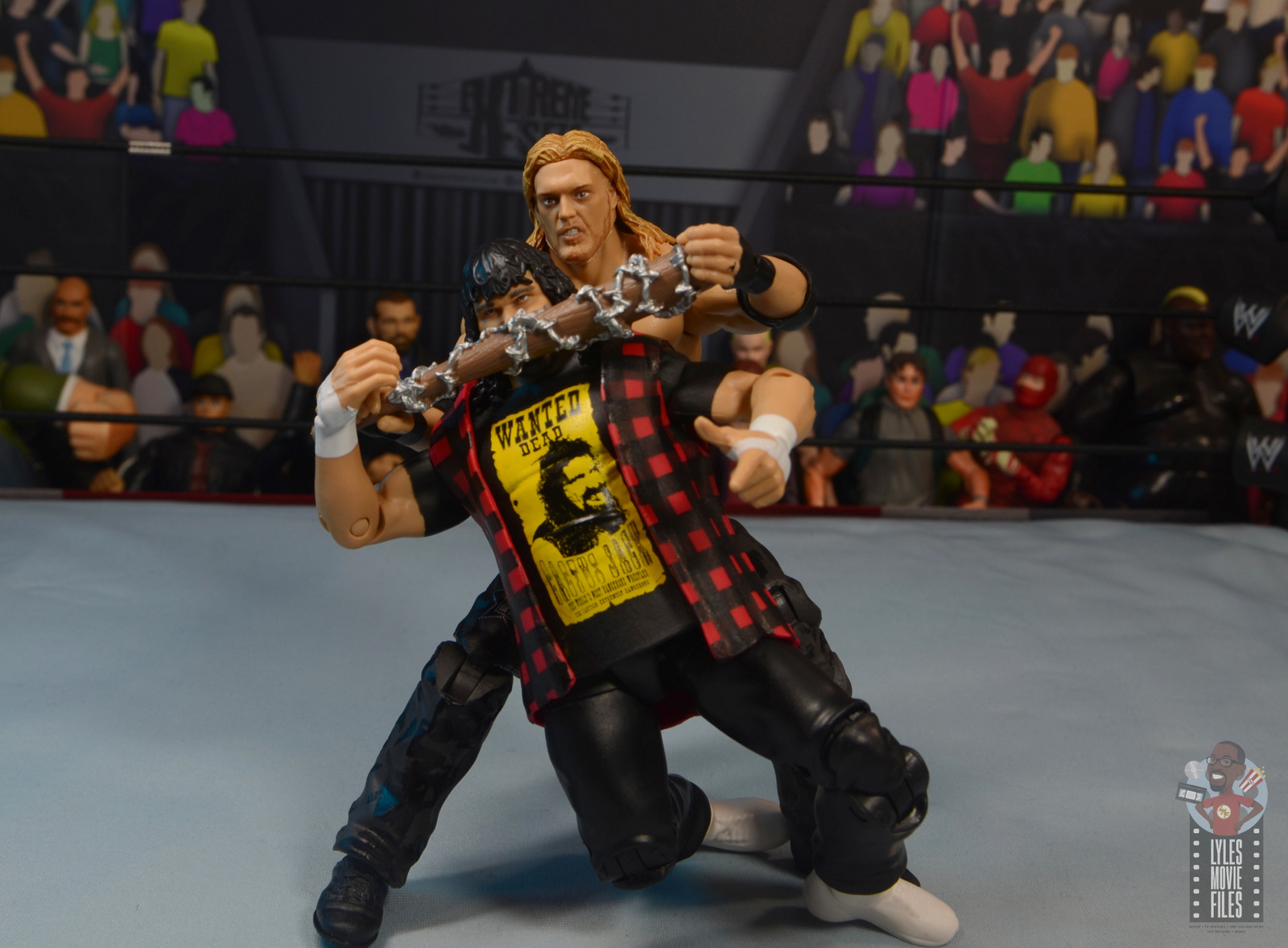 For the sake of this match, there’s no issues pulling off his brawling antics — fighting Foley will do that to even the most well-rounded wrestler. 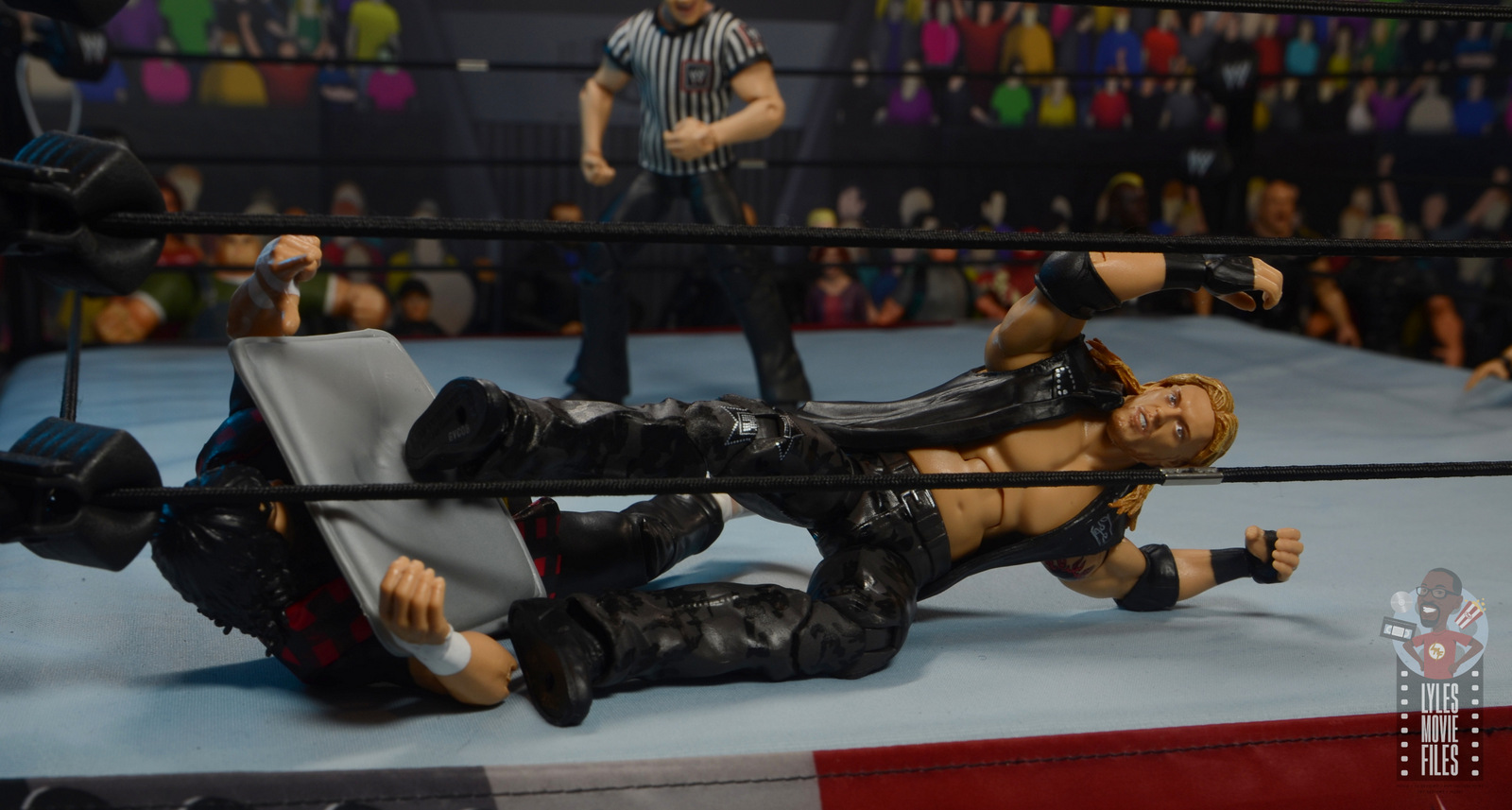 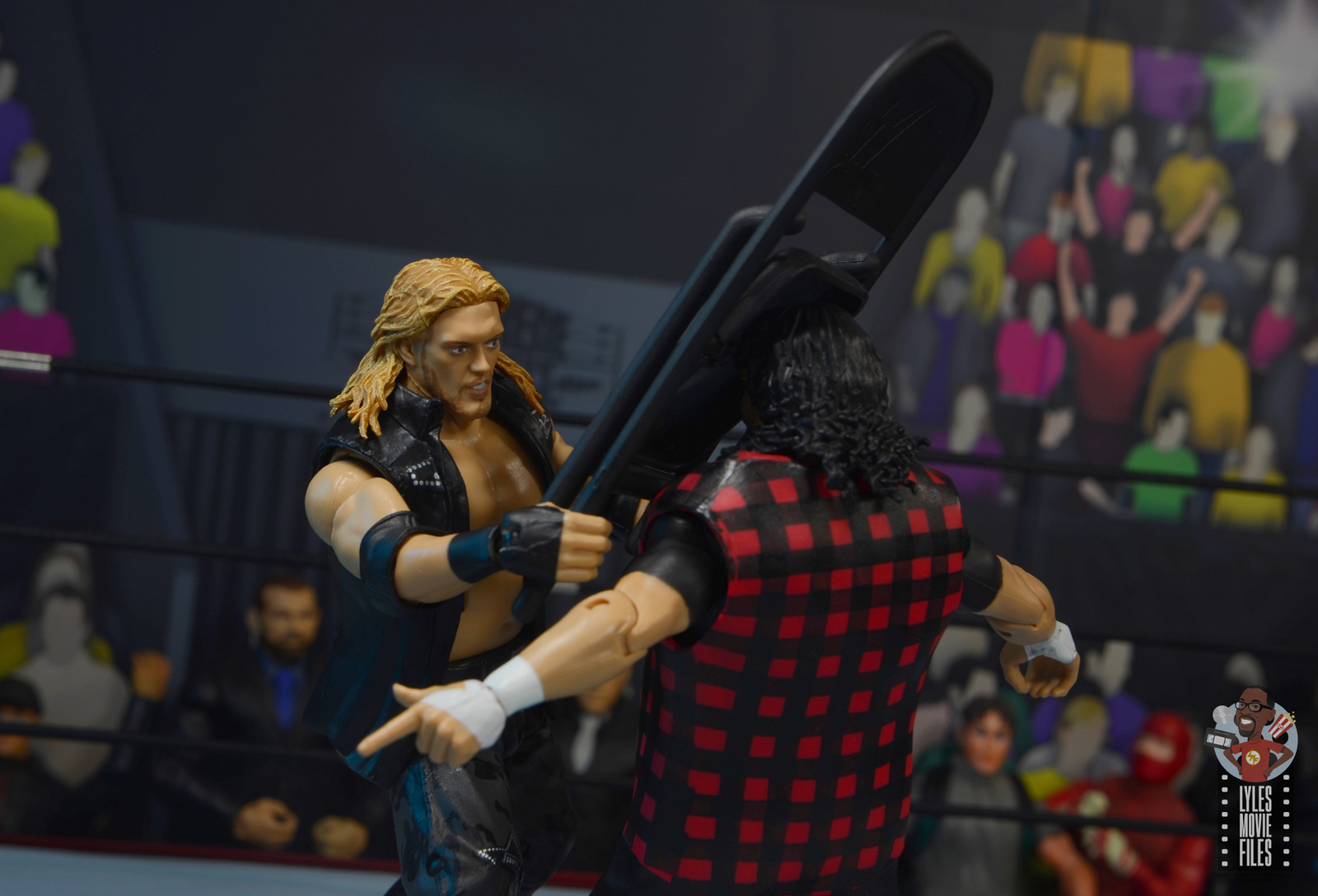 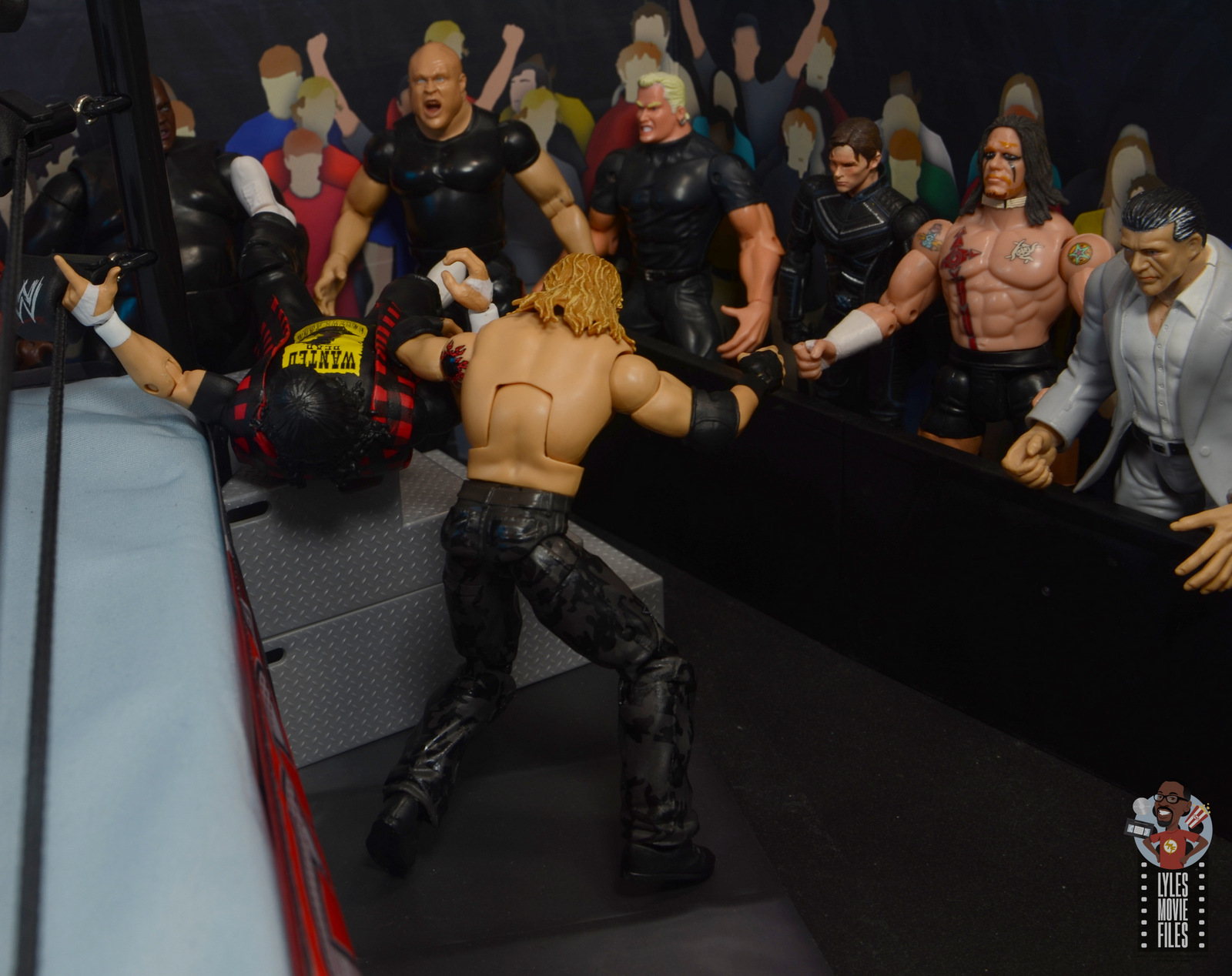 Accessories:  Edge used a baseball bat during the match so it makes sense to include although I wouldn’t have complained about a flaming table. 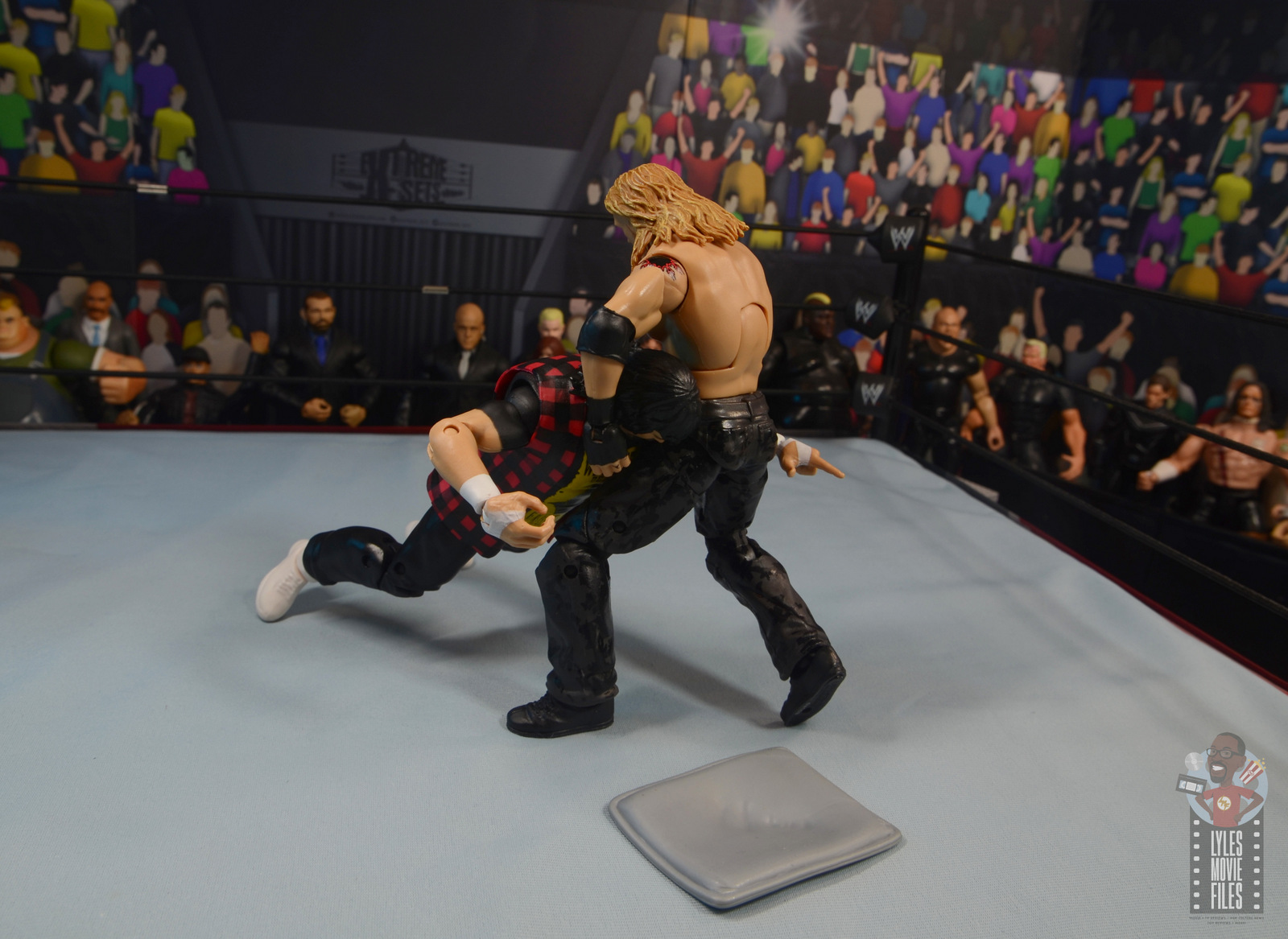 Since his trucker vest is removable and he didn’t keep it on throughout the entirety of the match let’s chalk that up as another accessory too. 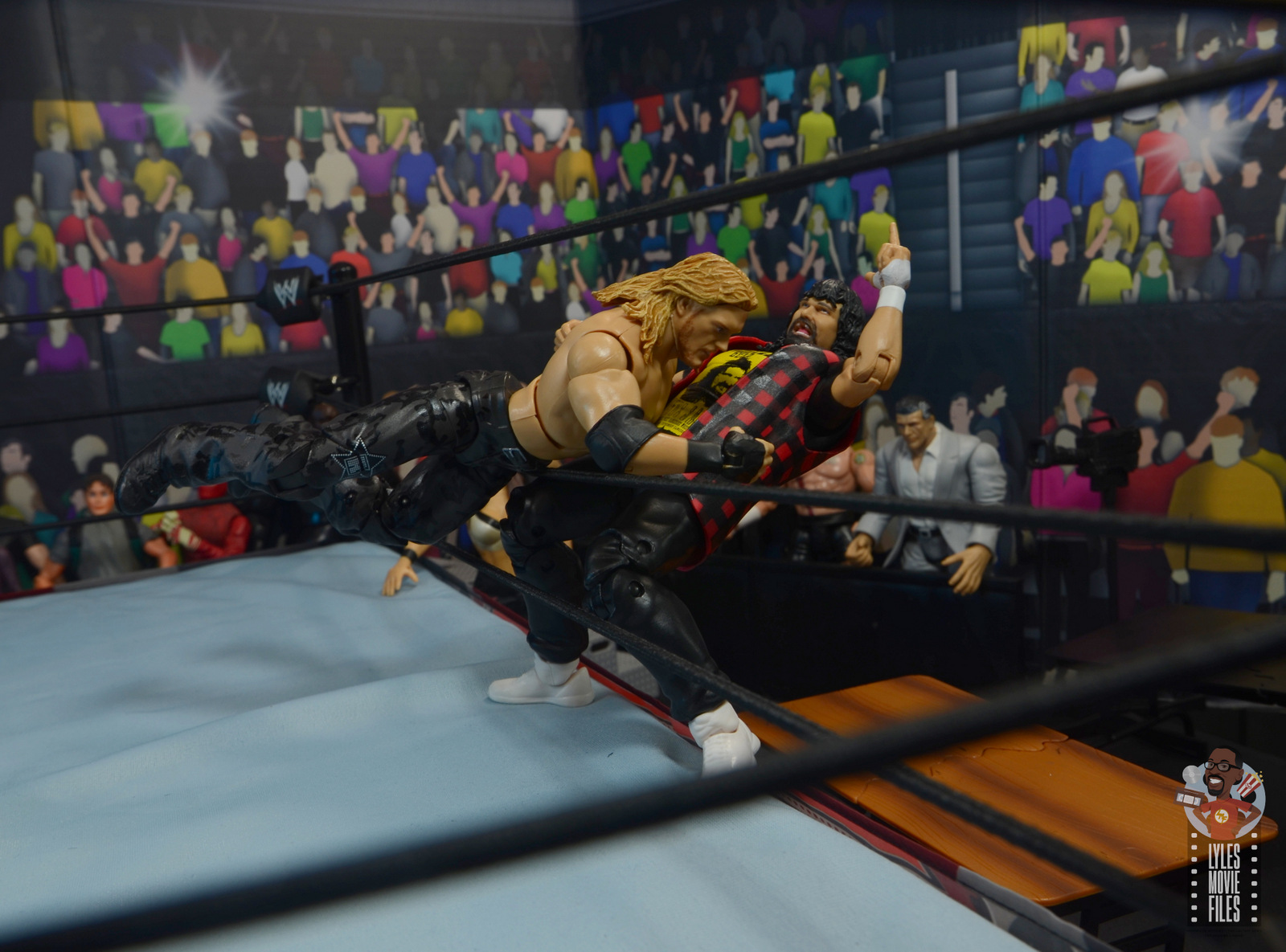 He’s also got a set of swappable rock and roll hands, which is a nice touch for Edge even though I don’t remember him doing that taunt pose gesture much during this match. 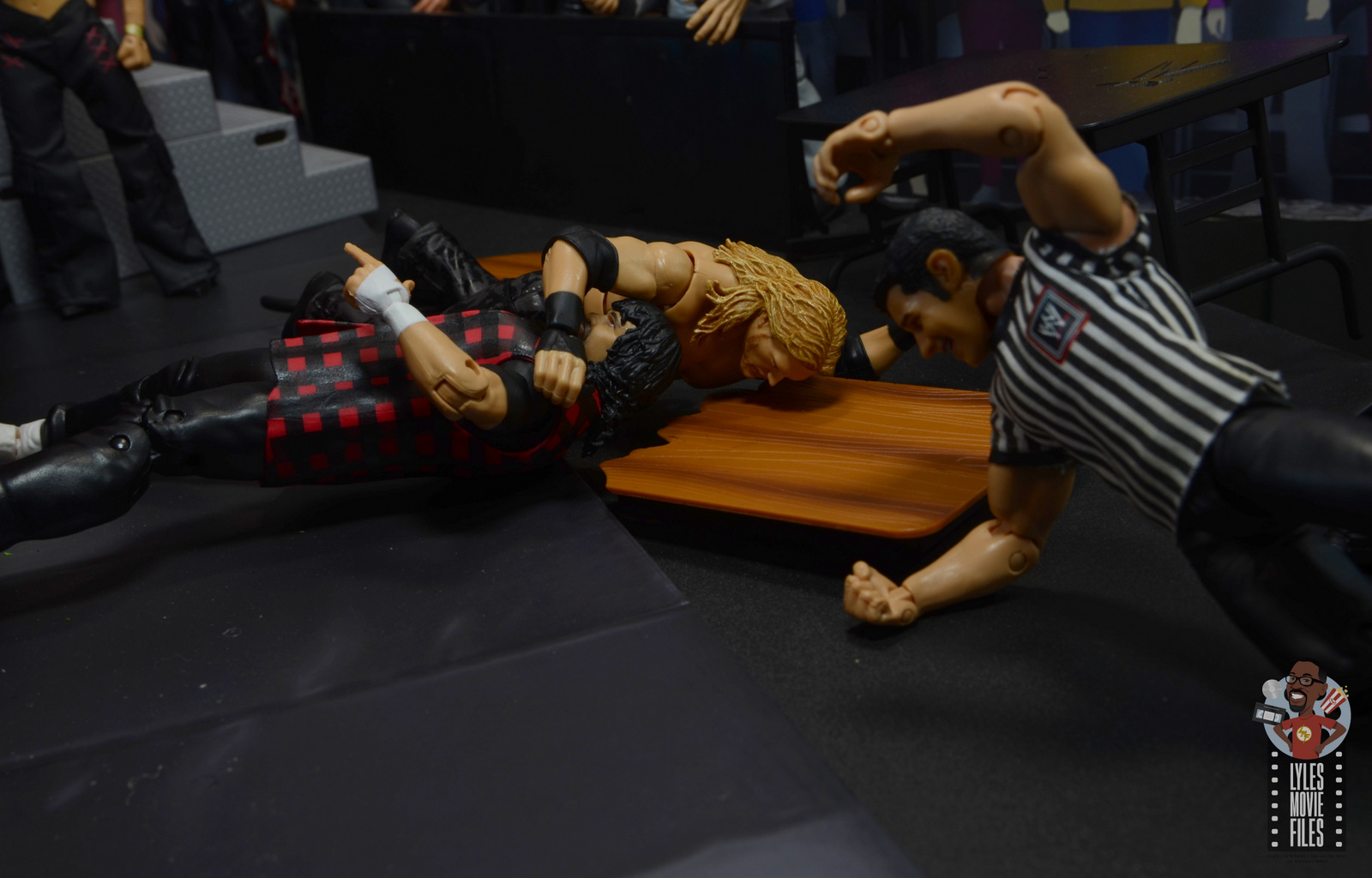 Edge also comes with two BAF parts — the older head sculpt that you could use with the Authors of Pain and the torso for the figure. Clearly this is an important part of the BAF unless you’ve got a suited torso chilling in your parts bin. 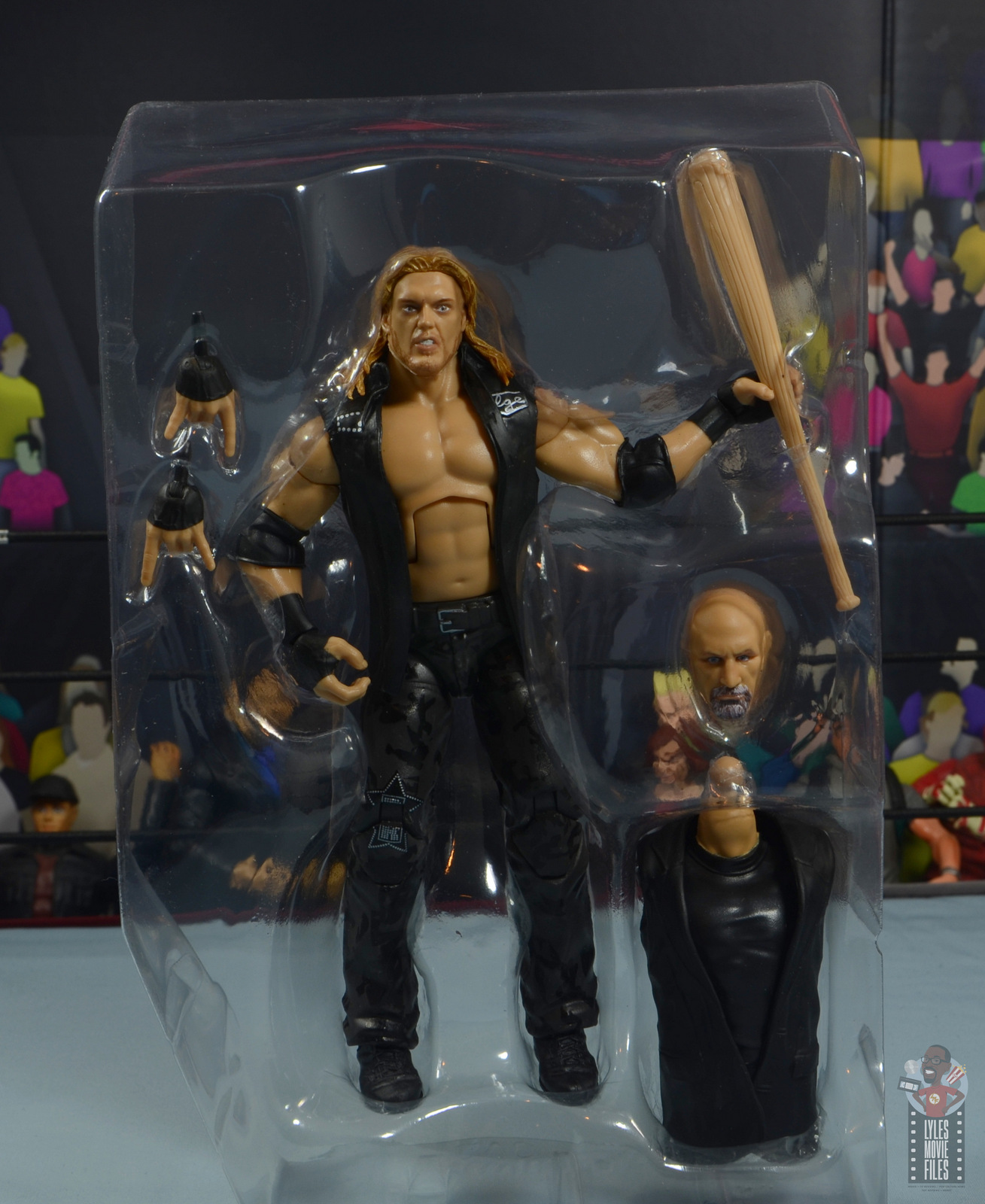 Worth it?  I got Edge for $20. That’s the base price for the line and I’m glad Mattel stopped tacking on a few extra dollars for BAF figures.

I’m still waiting for the perfect Edge figure. The Elite Wave 2 and Wave 16 figure are still the best takes on him. This could have been a tremendous variant look, but it’s killed by a poor head sculpt and torso choice. 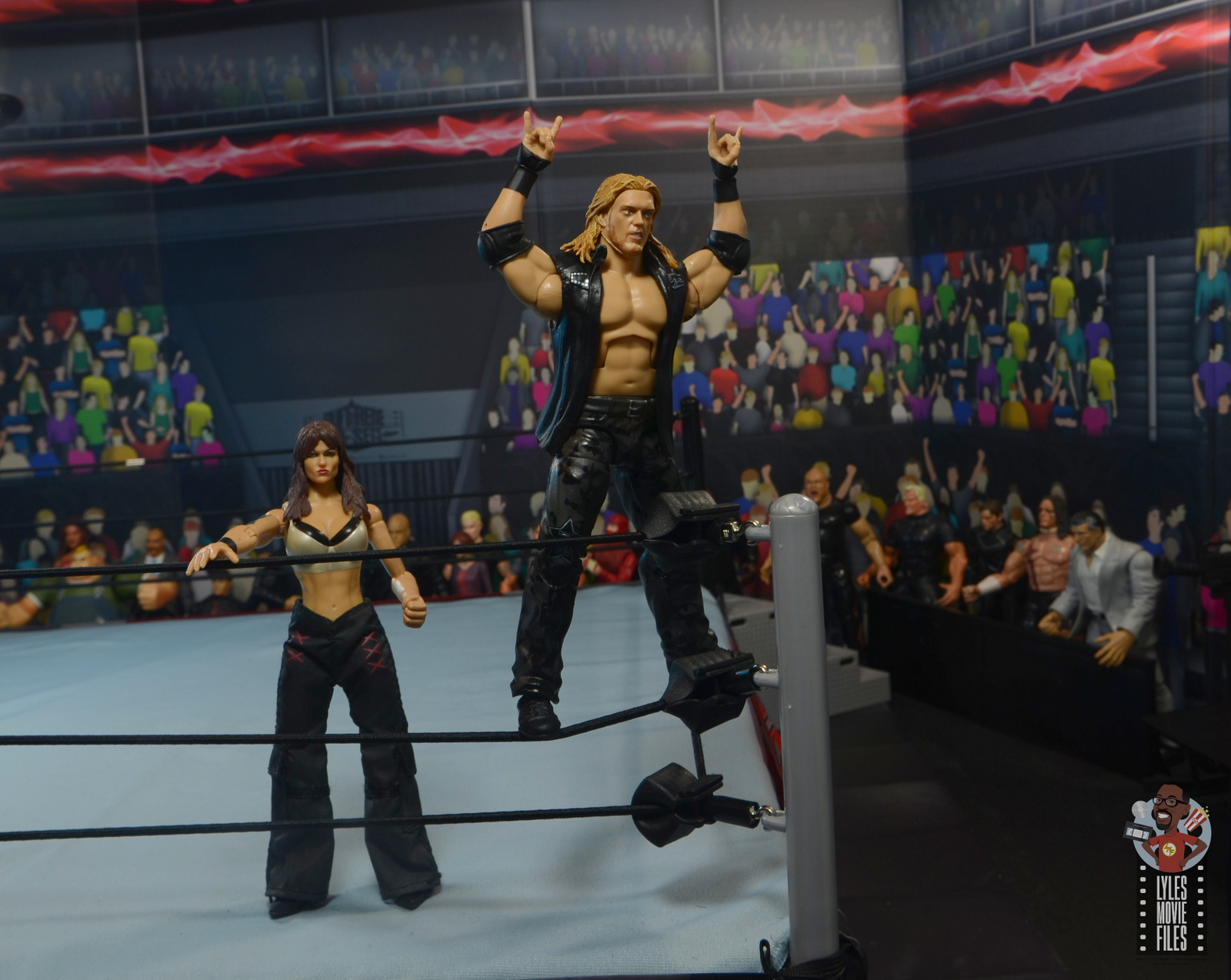 Where to get it?  I got Edge from Amazon, but I’ve also seen the full BAF Ellering wave at Wal-Mart and I’m assuming Target will also get them in whenever they decide to restock figures.