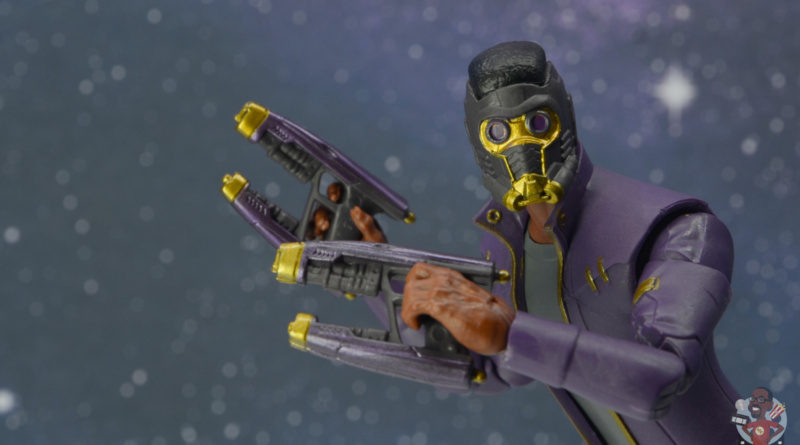 There was absolutely zero chance I wasn’t picking up the T’Challa Star-Lord Marvel Legends figure from What If? This was a fun reimagining of the king of Wakanda and his episode was one of the standouts of the season.

Then there’s the sentimental side of getting a figure of Chadwick Boseman’s final role in the MCU. While grabbing this figure was a given, I still have some pretty lofty expectations that Hasbro does it right. Let’s see how he turned out.

Packaging:  There’s not a lot of fresh colors left for the accent of the standard Marvel Legends packaging. Maybe going away from the default black could help this Disney+ wave stand out?

The top of this package features The Watcher and the What If…? logo is prominently displayed at the front. The package art conveys the style from the series although in this case it probably would have been a better choice to just use the art from the series. Given our overall familiarity with T’Challa the bio didn’t need to be too detailed and it’s fine. 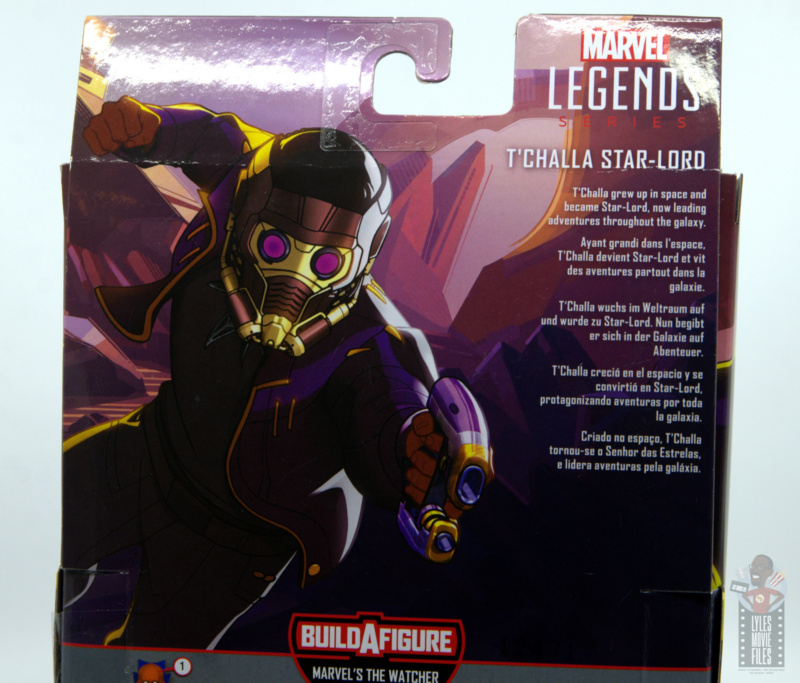 Hasbro once again went with the odd rendering visual for the sell through of the wave. I don’t hate it, but it looks off to me.

Likeness: As with all but Sylvie in this wave, T’Challa is done in the animated style. Having the figure in hand I do kinda wish Hasbro decided to go the Star Wars The Black Series route with making animated characters fit in with the more realistic format of the majority of the line. 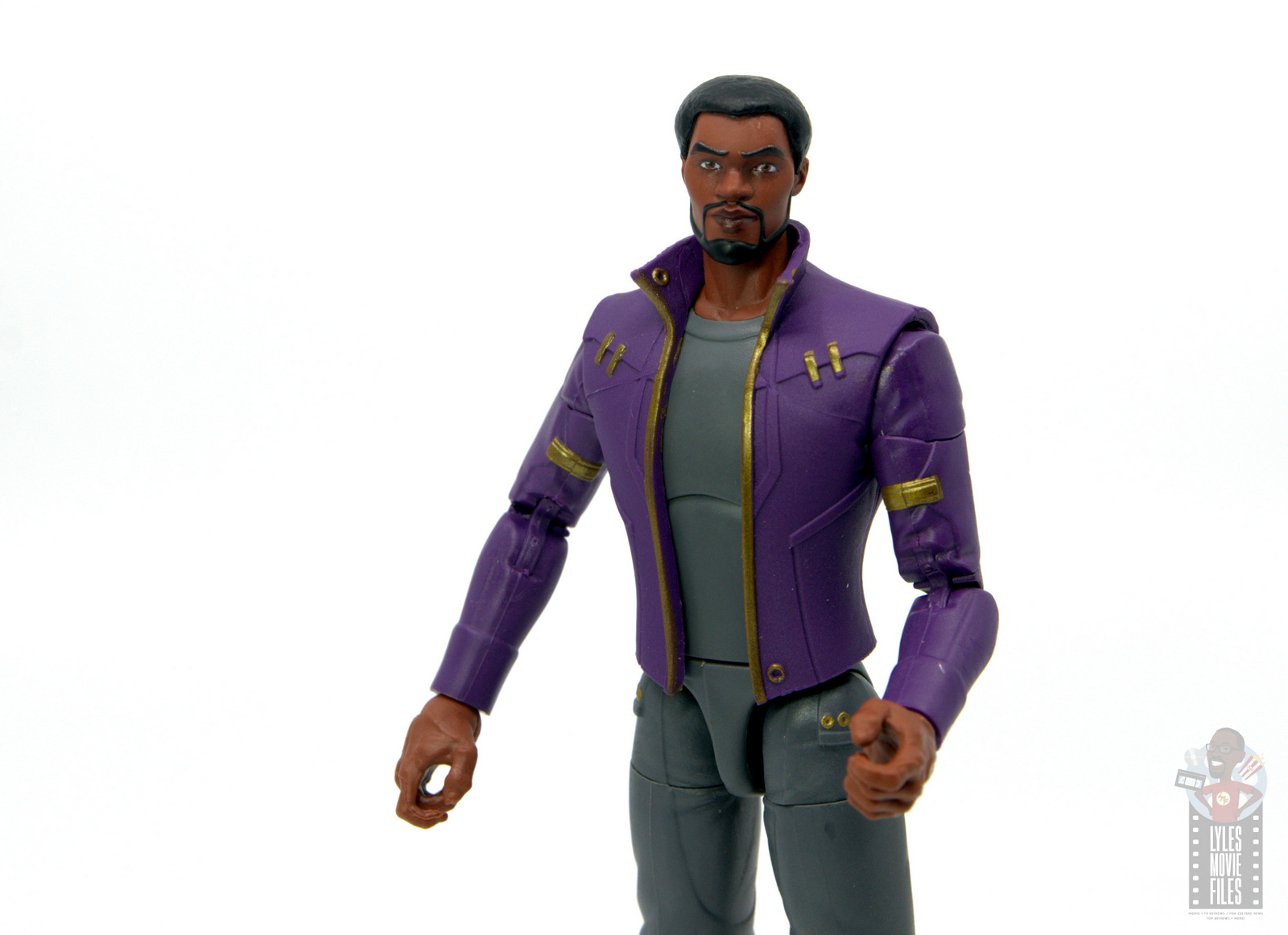 I was curious about swapping a more realistic Boseman head sculpt from the various unmasked portraits and see how that worked. It’s not bad although the hand skin tone isn’t a match. 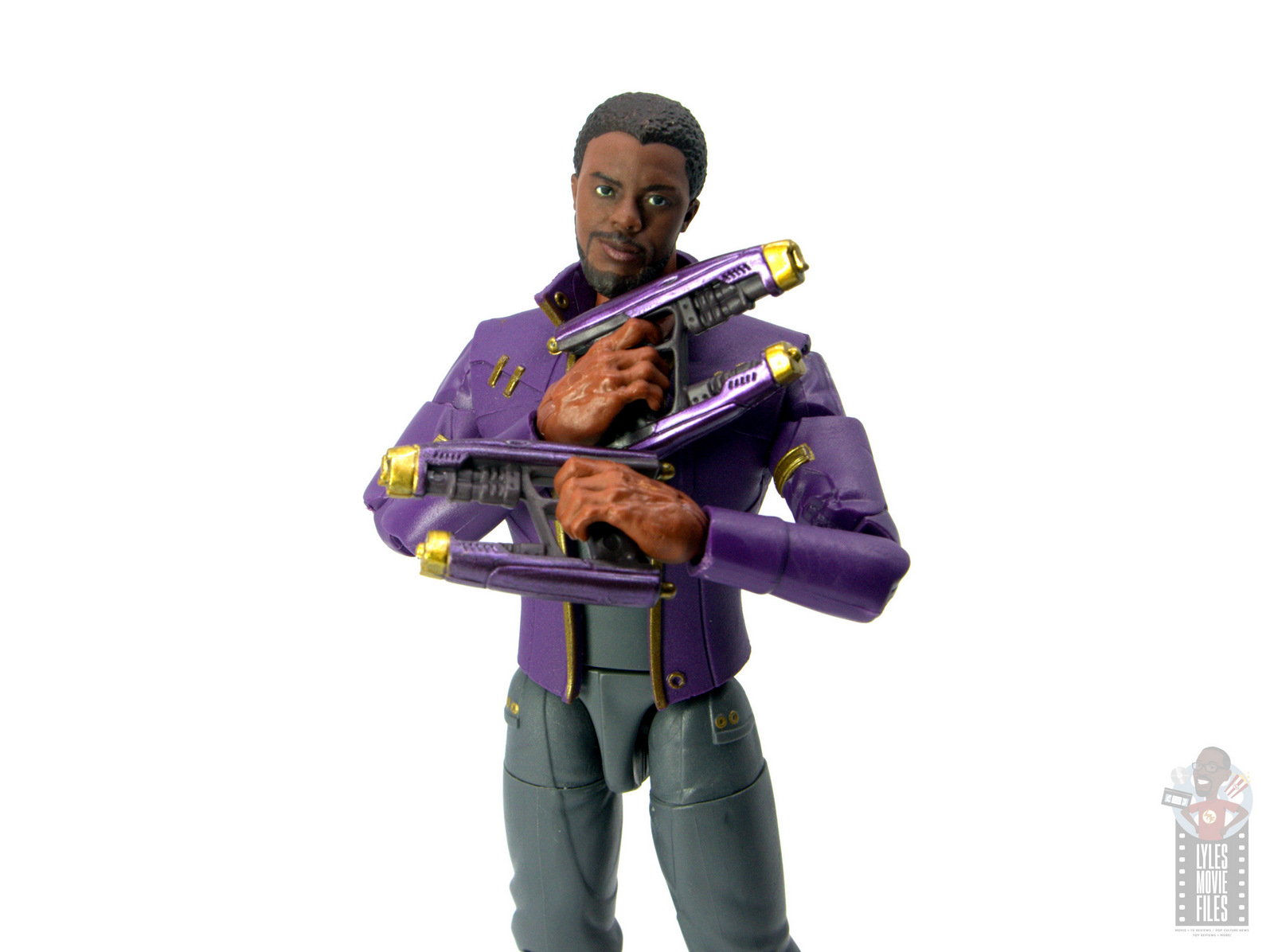 Even though it’s an animated take, the Boseman likeness still comes through. 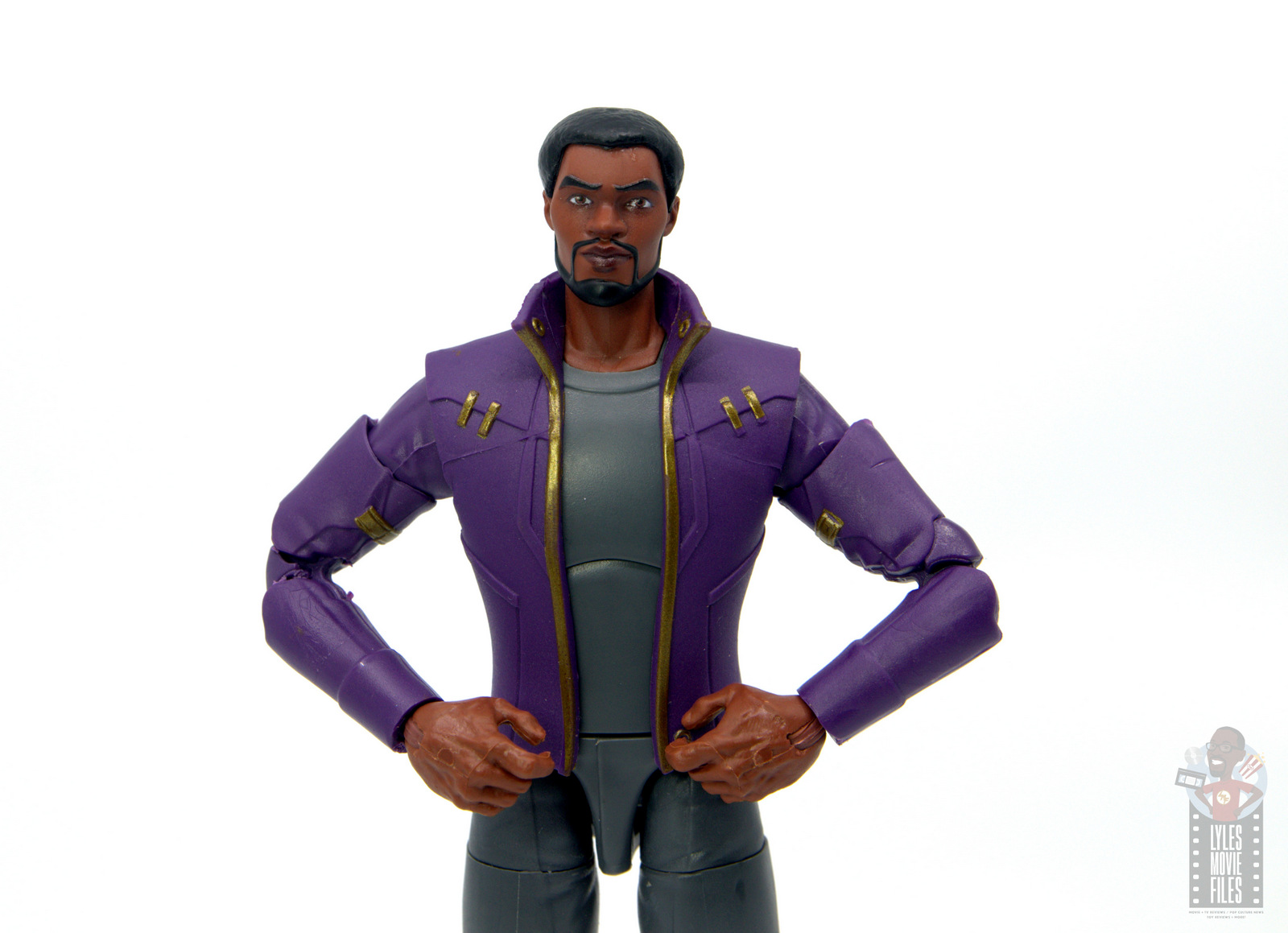 Most of the streamlined detail is apparent with the outfit. The MCU Star-Lord figures have benefited from a large amount of texturing and paneling. 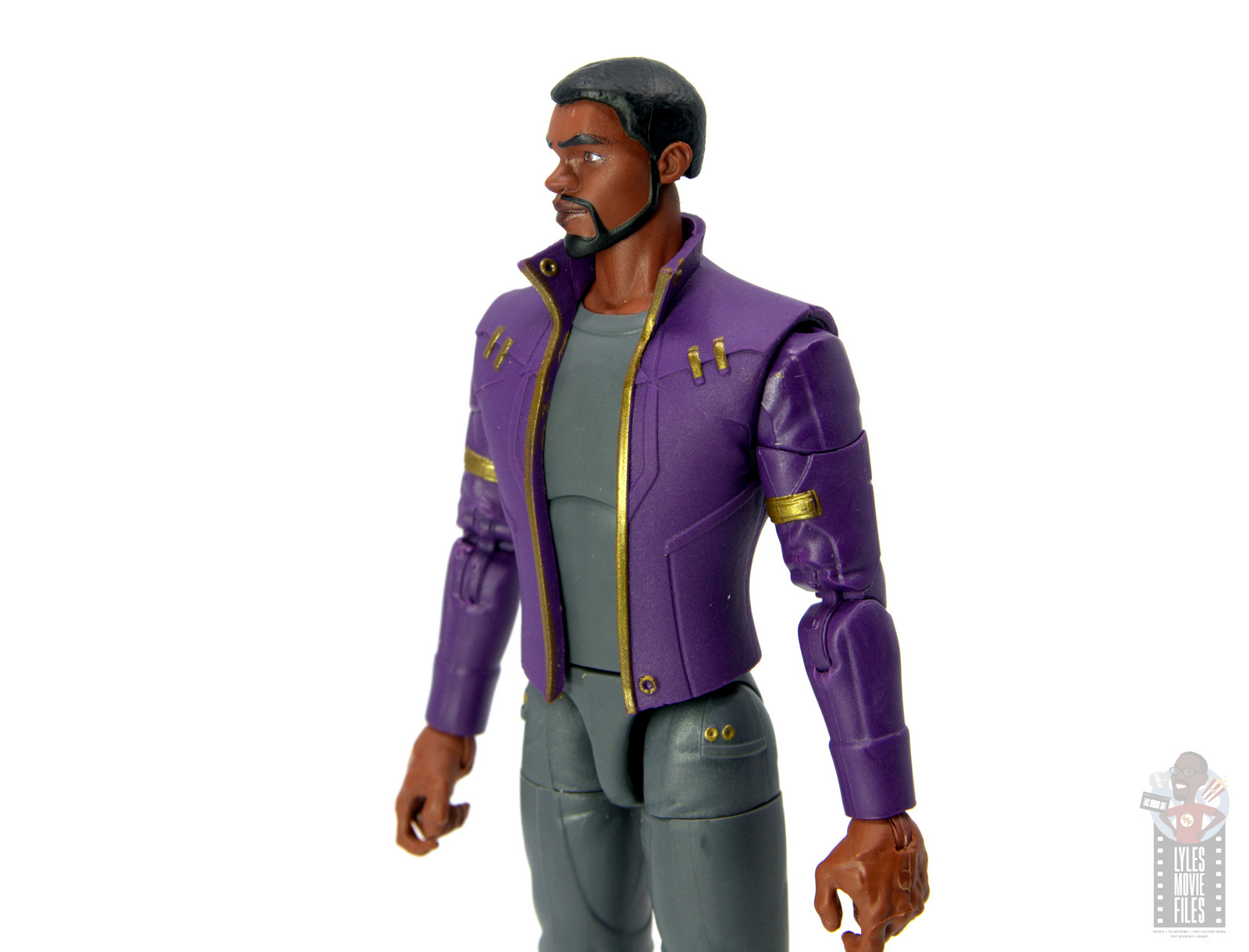 The animated design is simpler although there are some solid detail work like the paneling on his pants and the Wakandan-style necklace pattern and half bands on the jacket.

In some instances, T’Challa is actually wearing the necklace/chain from his Black Panther costume. In the opening sequence, he’s not wearing it so Hasbro isn’t necessarily wrong although it’s a puzzling detail to forget.  It’s the legs that look the least defined and have more of an animated vs. hyper realistic. 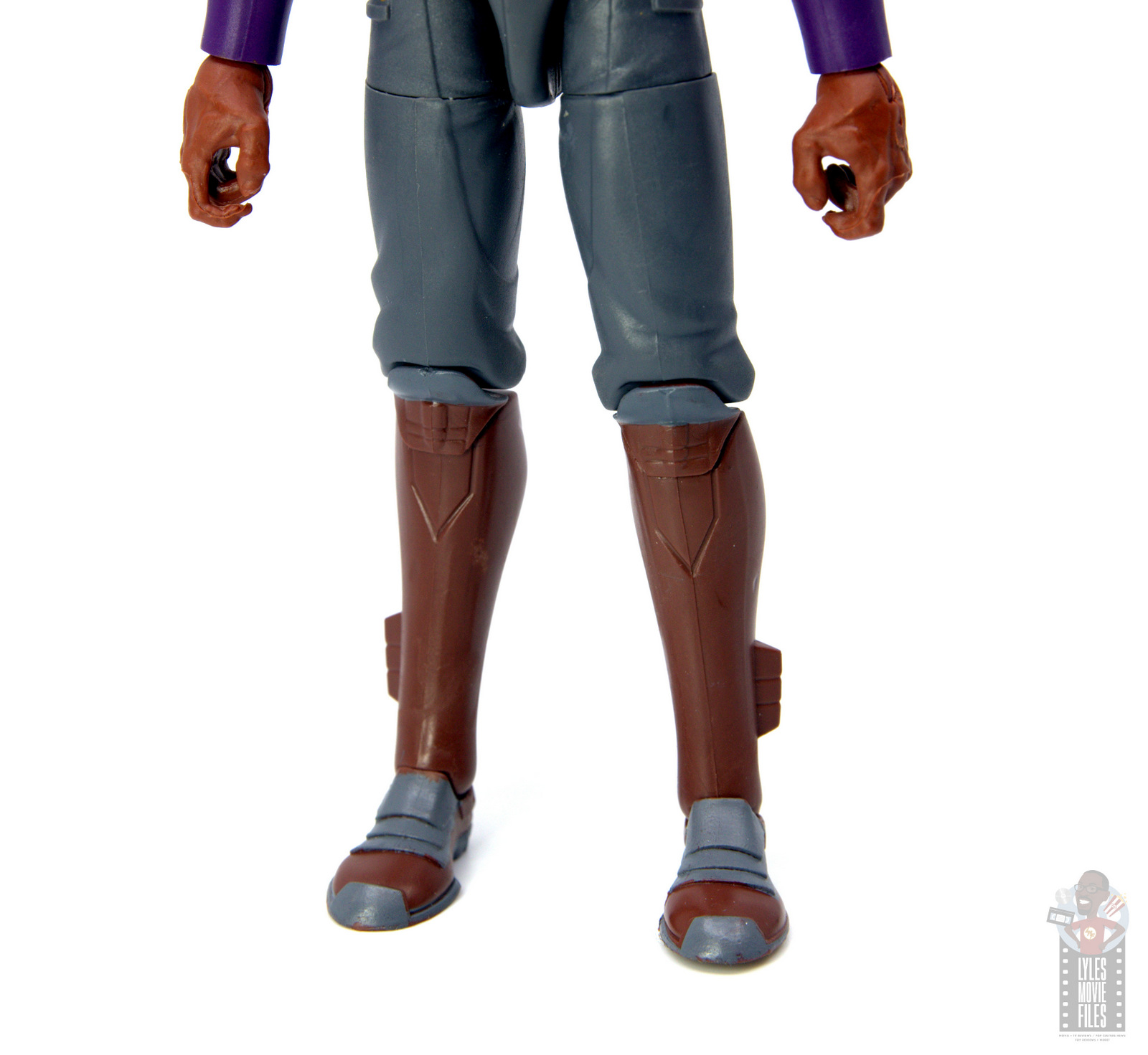 Paint: With the animated style, T’Challa doesn’t require the same kind of intricate paintwork as most figures. Hasbro did a great job matching the proper hues of the Star-Lord outfit with the right shade of purple and grey shirt and pants.

Scale:  T’Challa didn’t seem to be any taller or shorter than his MCU counterpart. Standing with his fellow Guardians of the Multiverse, T’Challa should only look up to Captain Carter and Party Thor, assuming we get the latter. We can compare him better to the Marvel Legends Killmonger figure. 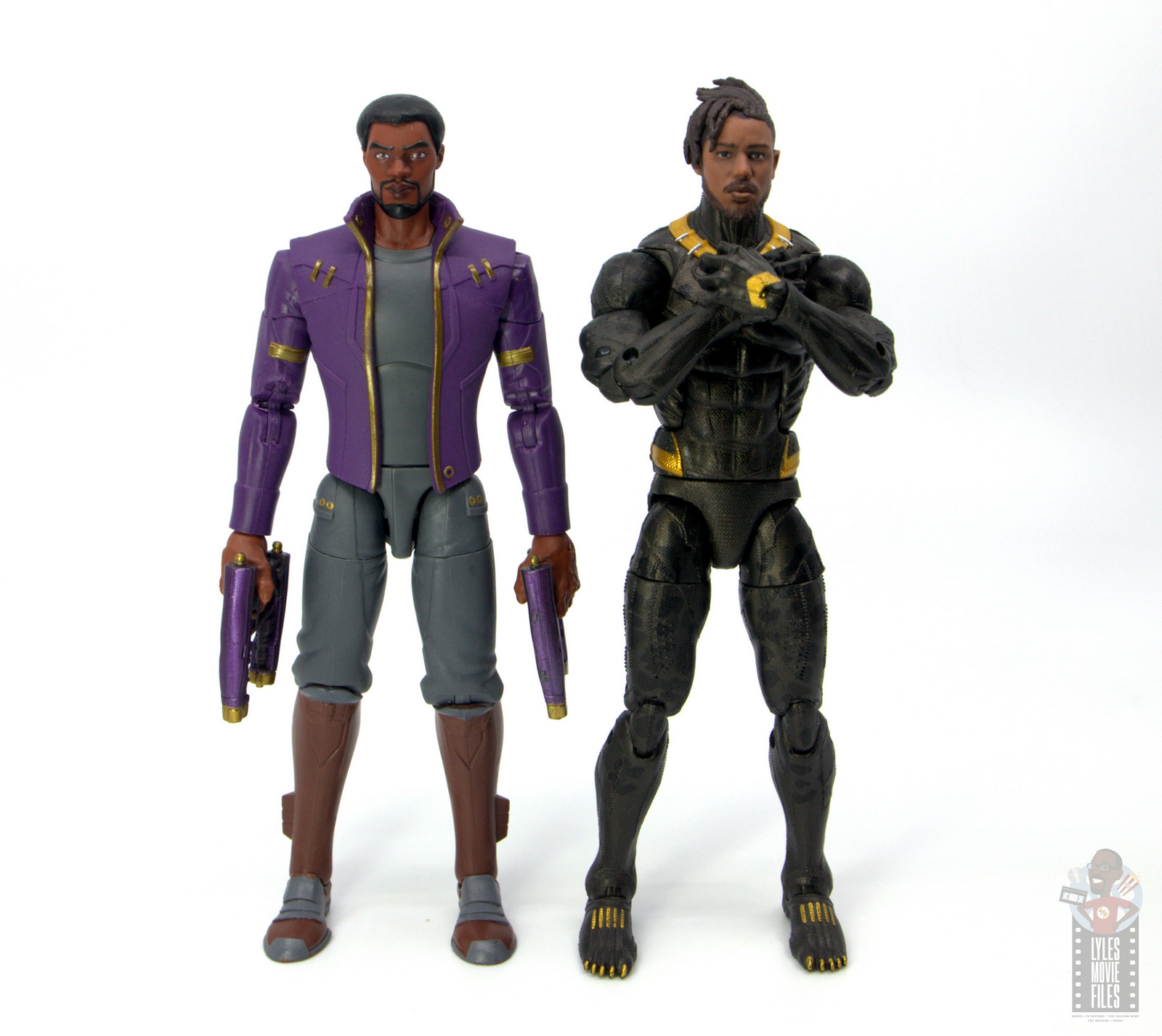 And with the alternate helmet sculpt, T’Challa actually looks pretty good next to Killmonger. 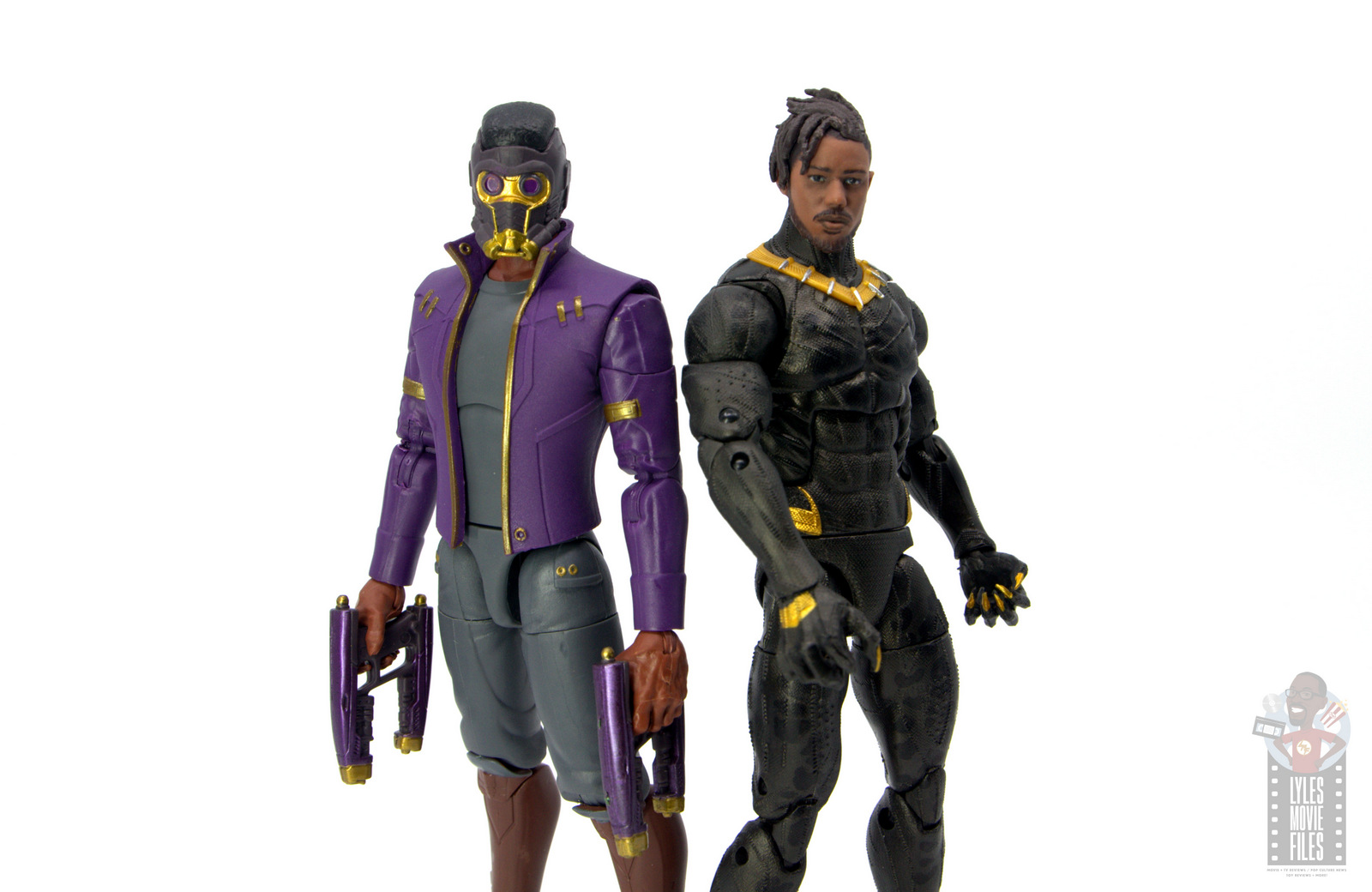 Articulation:  T’Challa was a distant fighter who didn’t have a problem getting up close as needed. His fight style is much different than his Black Panther incarnation. 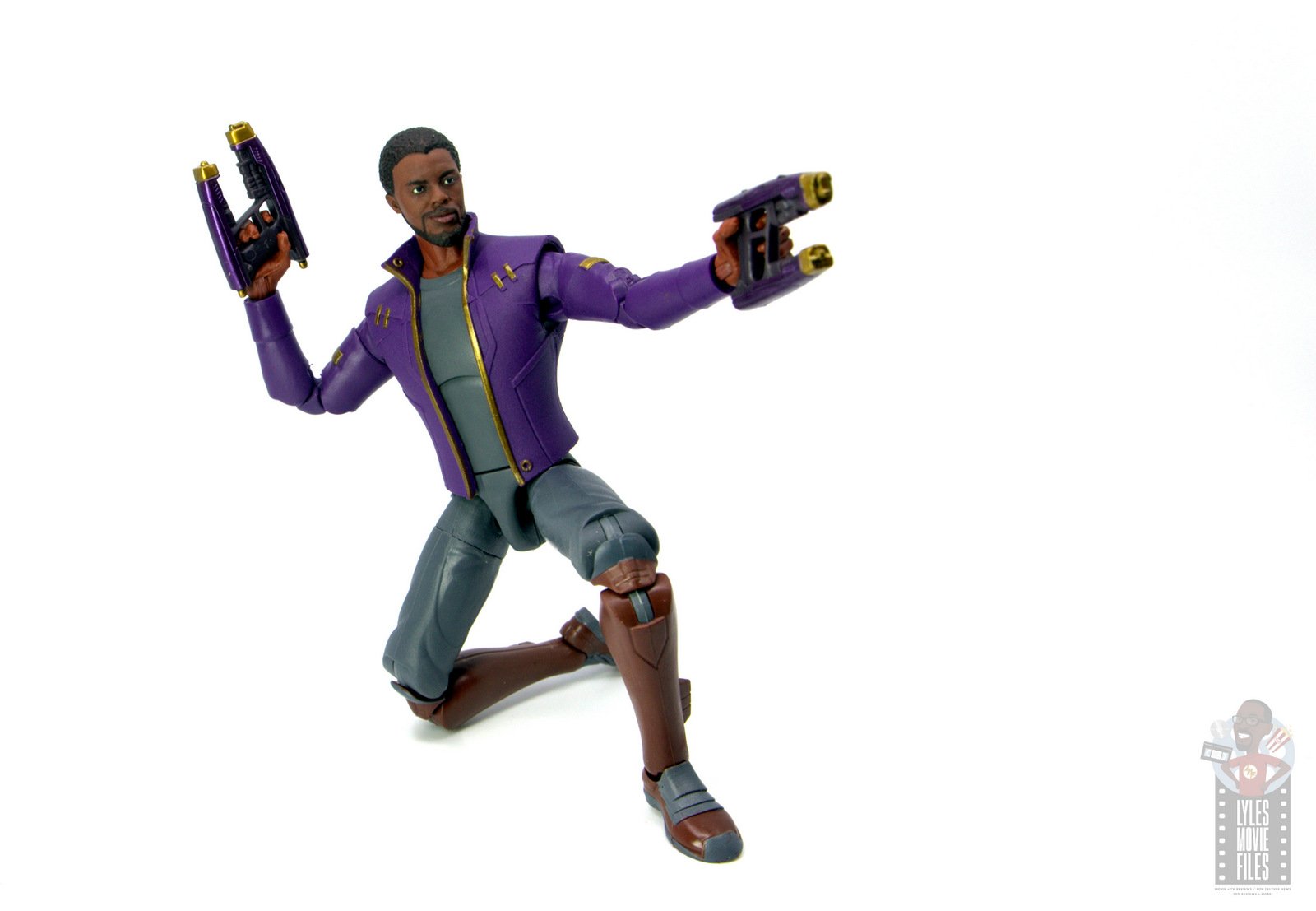 The double-jointed elbows and biceps are key here. Everything else as you’d expect from Marvel Legends at this point although I’m still getting used to the pinless joints. 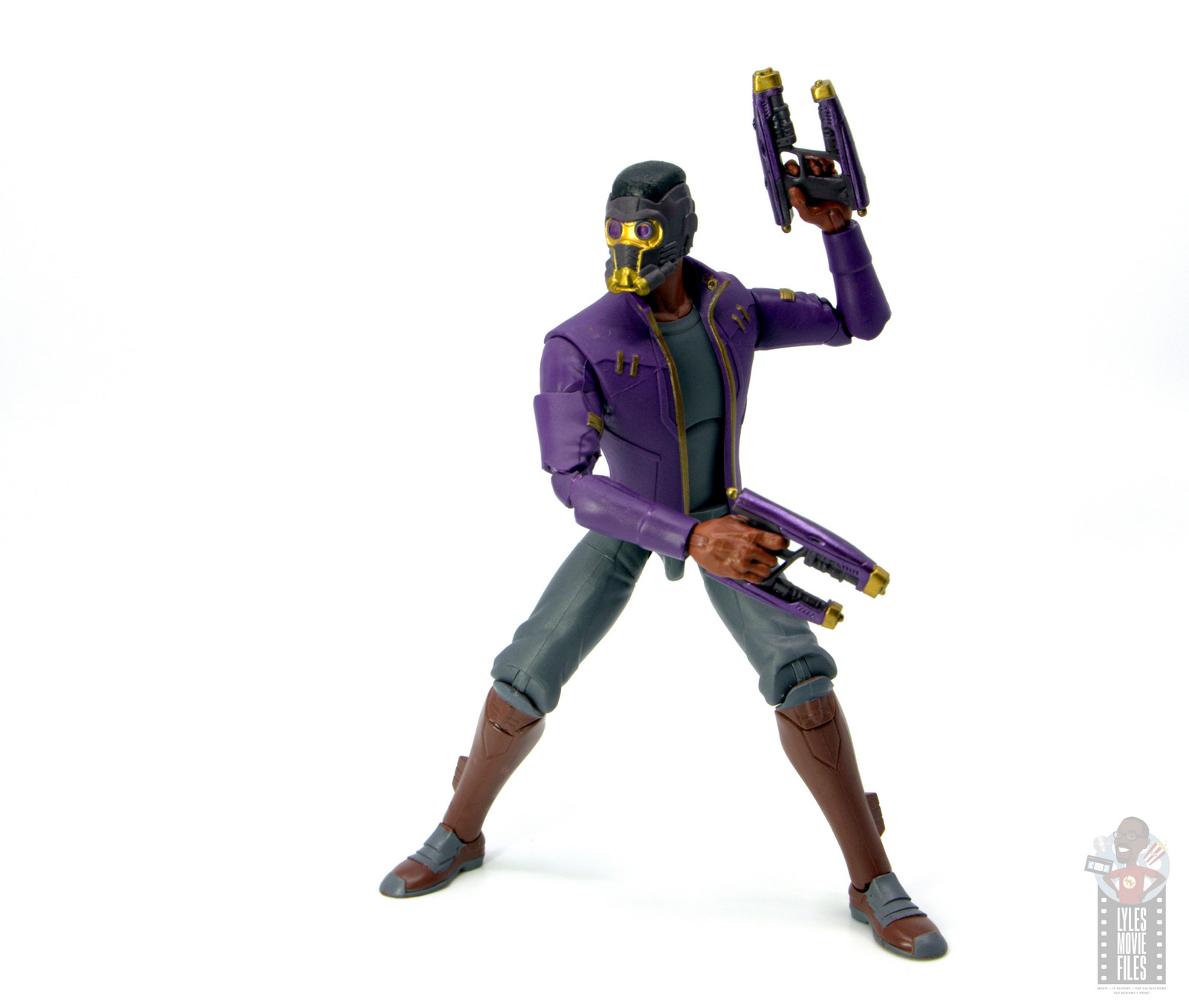 The ankles are a little weak. Any really dynamic stances will lead to him toppling over relatively quick. That’s not great. 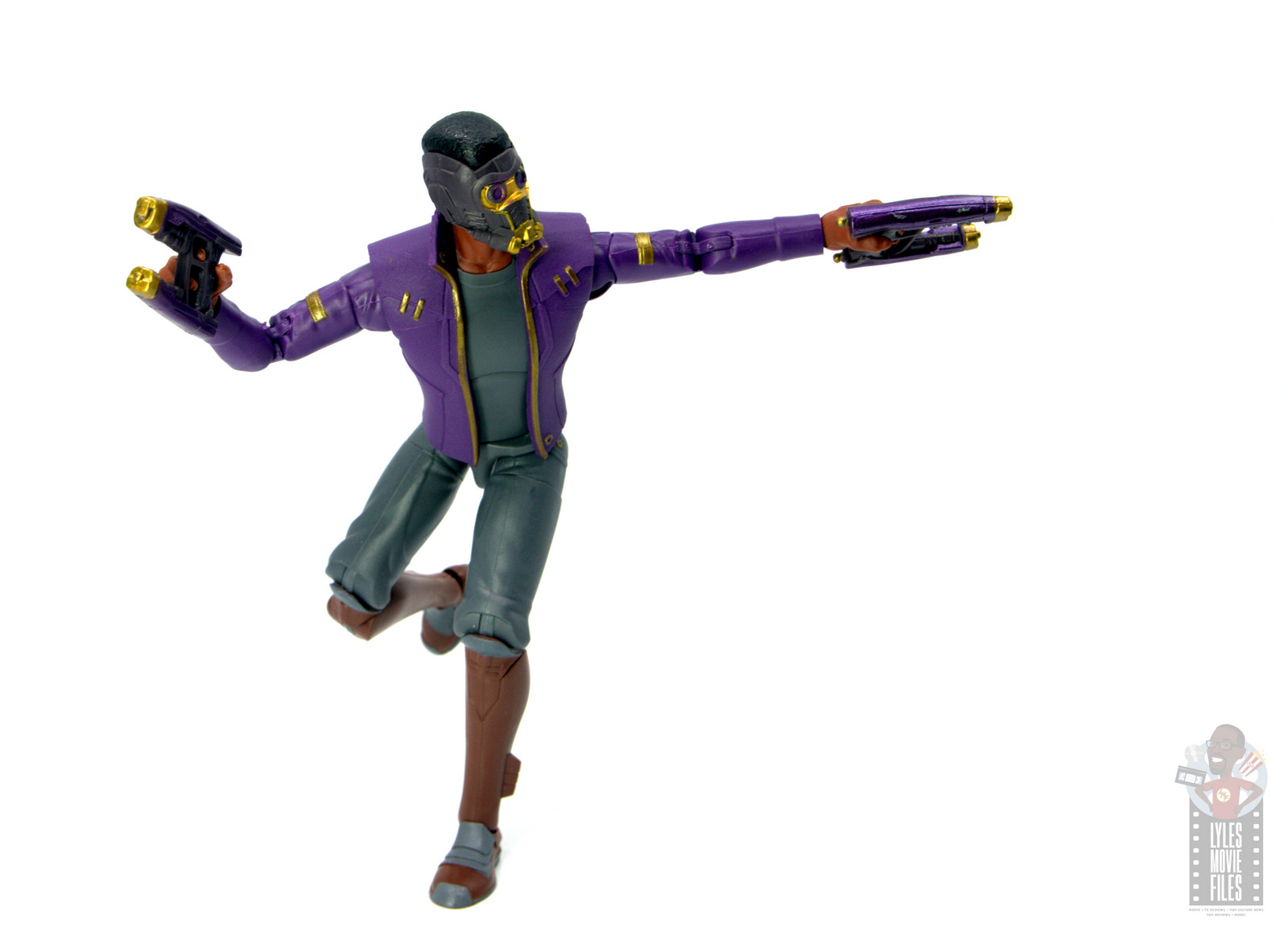 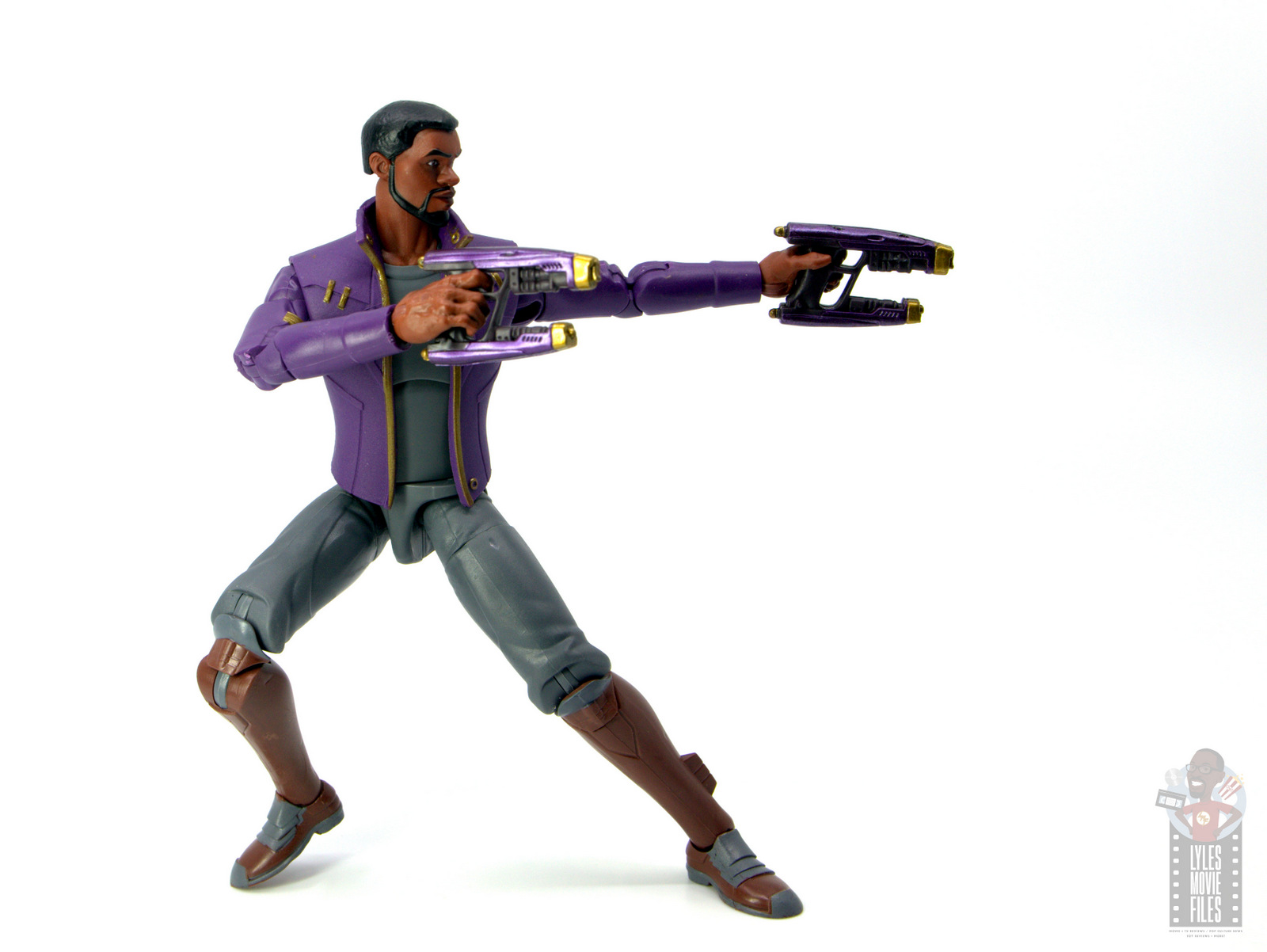 Accessories:  T’Challa comes with the alternate helmeted head. I like the distinction of this one from the Peter Quill version

He also gets his Quad Blasters. They also have the purple and gold paint highlights to match his attire. 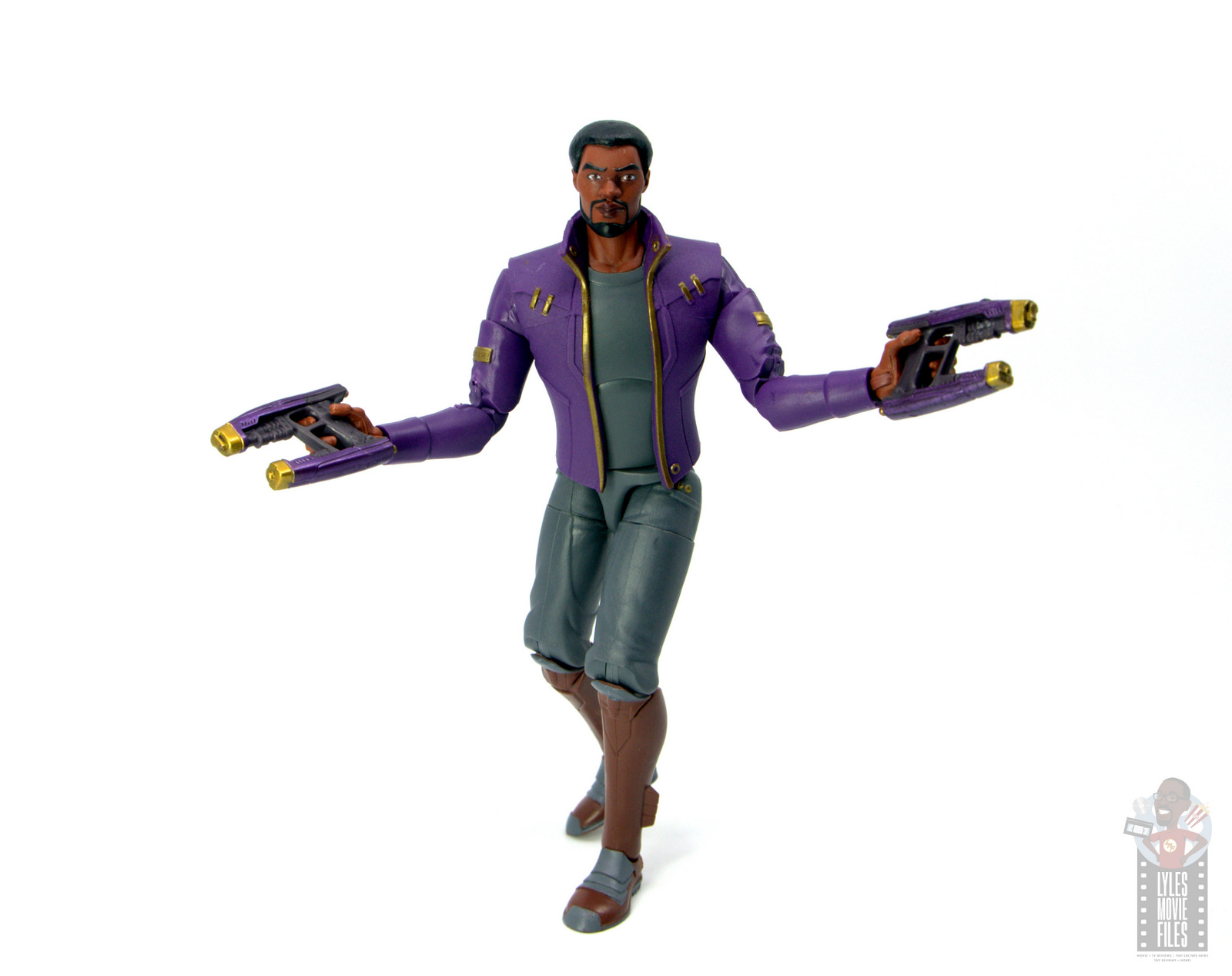 Finally, he comes with the head for the Build-A-Figure The Watcher. 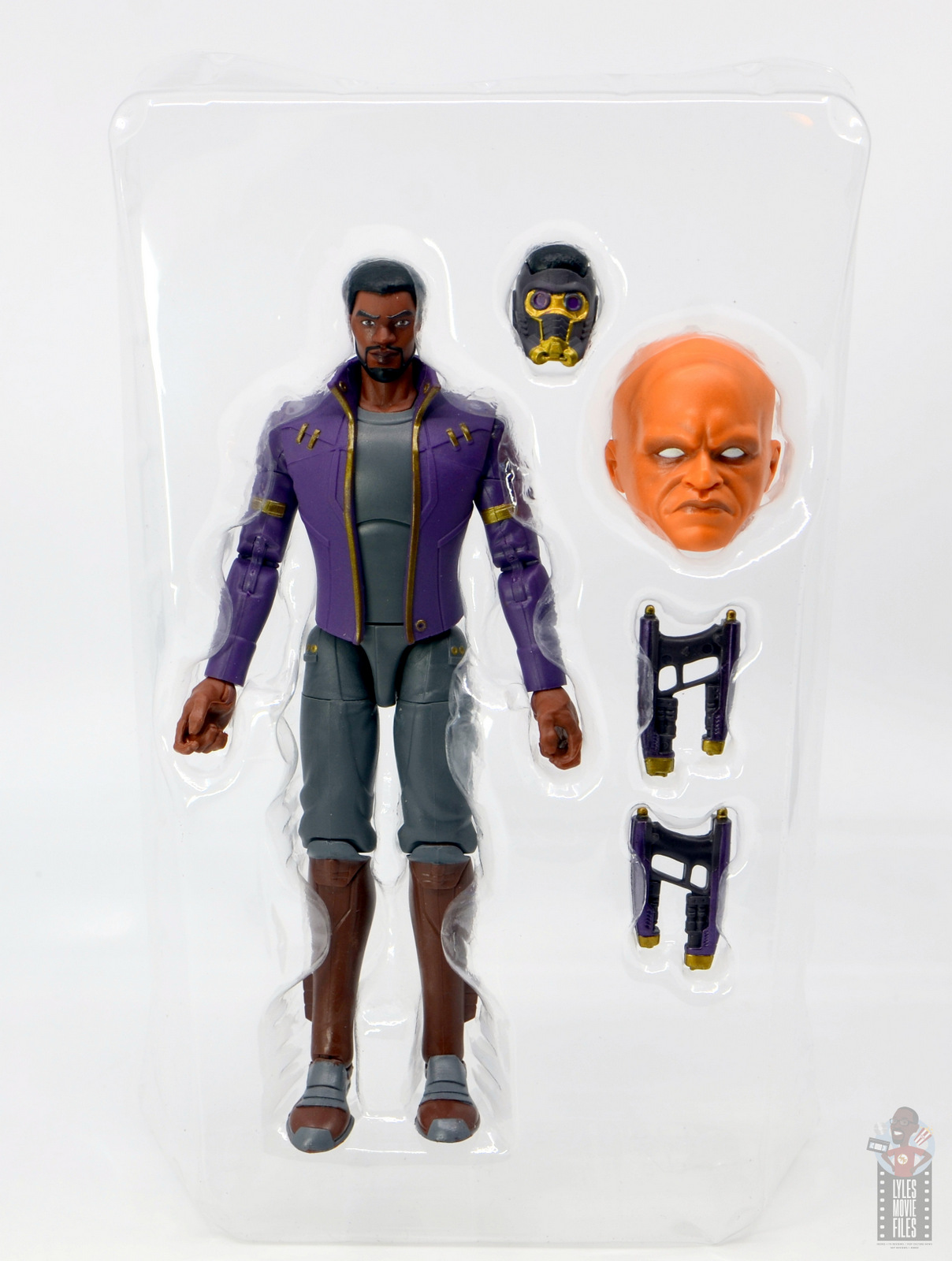 Worth it?  I was able to catch T’Challa for $20 — cheaper than the now standard $22 price tag. This is a case where you can find him at $20 at certain retailers and even then that may vary from store to store. 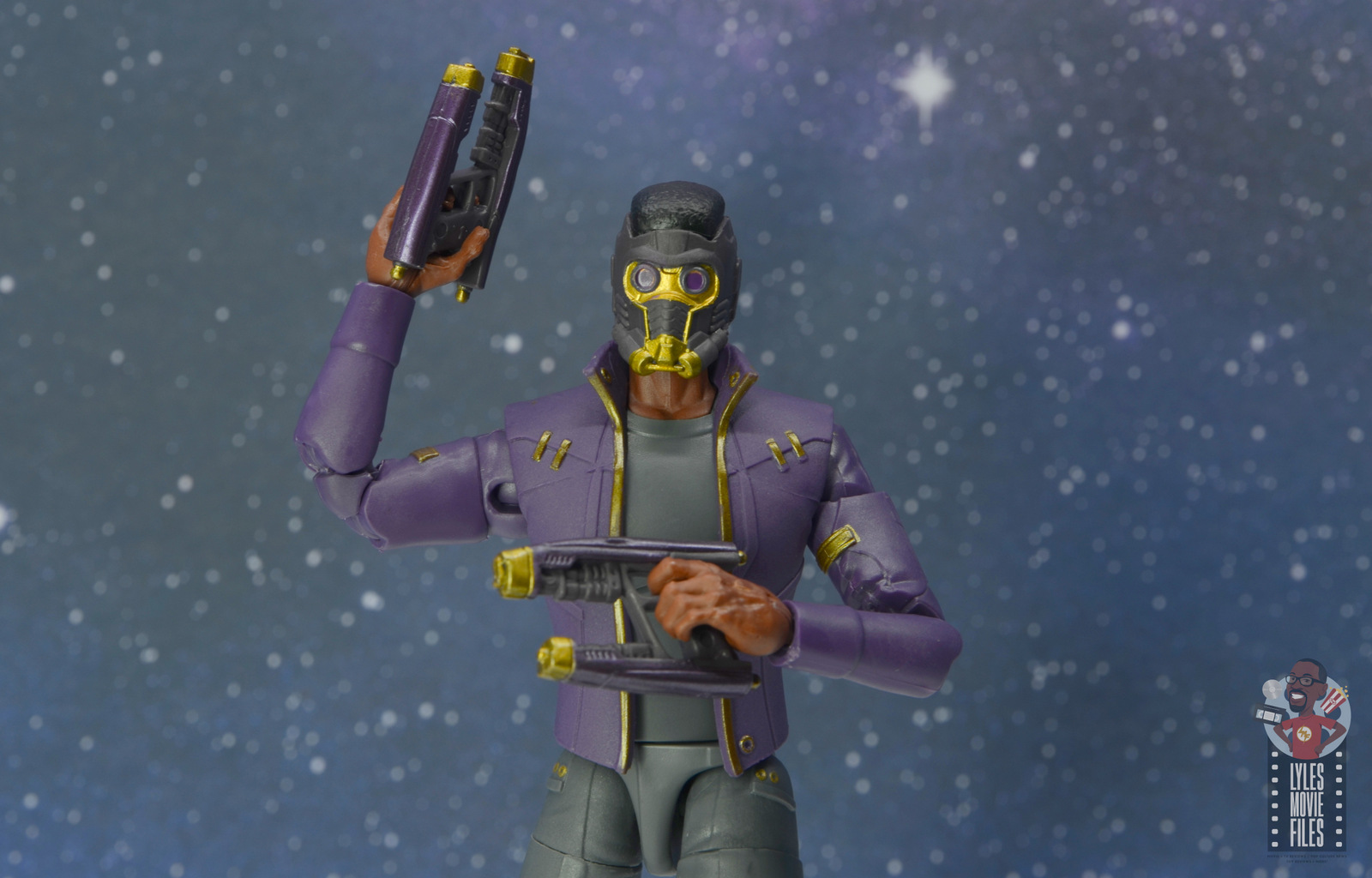 The $20 price tag was ideal for this line and at $23 we’re starting to reach a point where Hasbro needs to increase the value somehow. 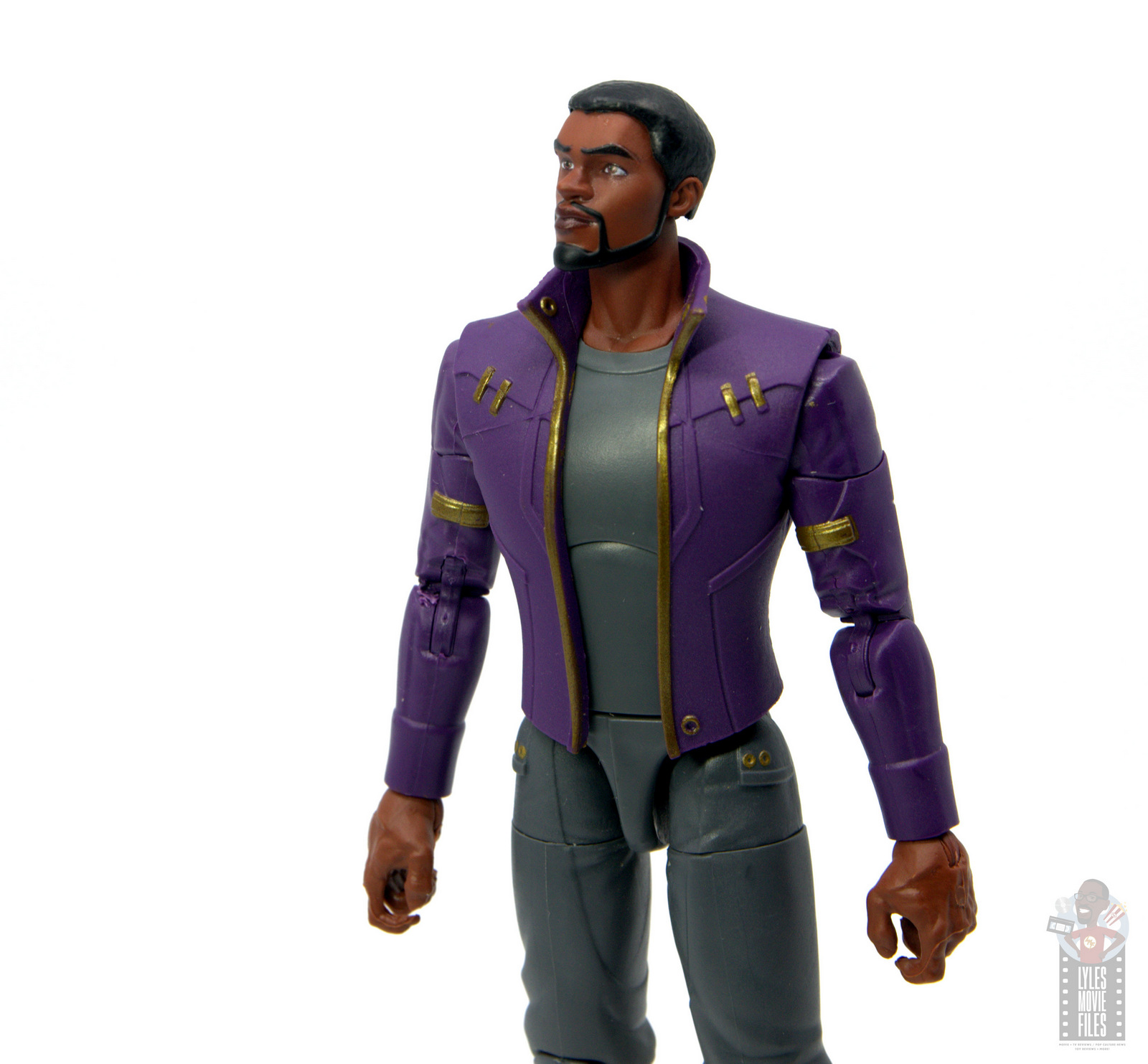 T’Challa Star-Lord was a must-get for me and Hasbro delivered on this highly stylized, but fun take on Black Panther. 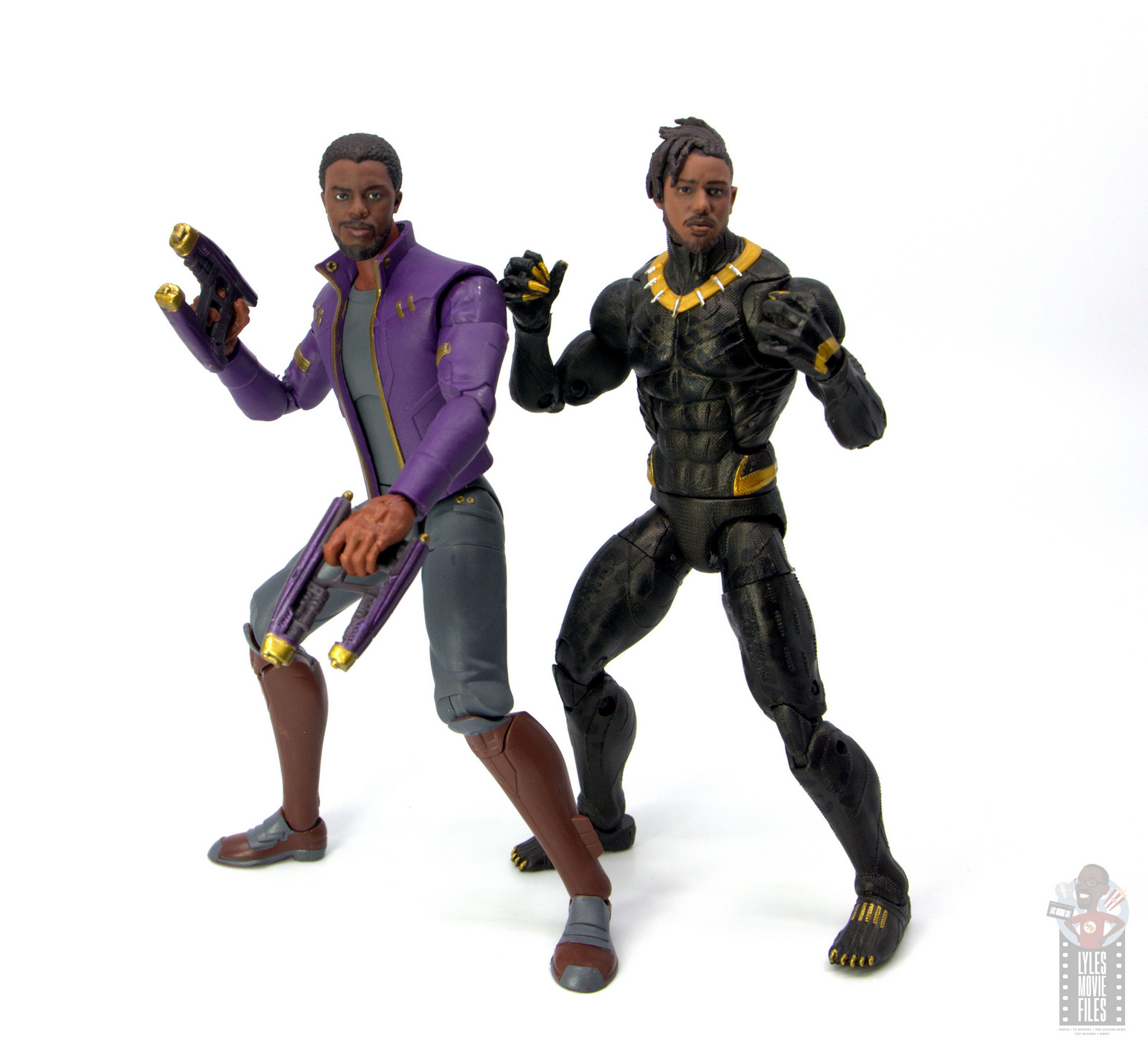 Where to get it?  This wave is just starting to show up at stores. I’ve found them or remnants of the wave at Target. Wal-Mart also has them and Best Buy appears to have them as well. Expect GameStop to have the wave as well. You can always grab him from Amazon or Entertainment Earth.