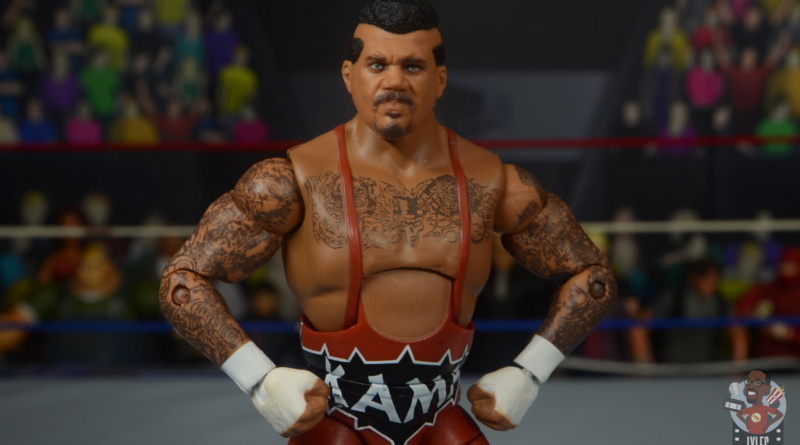 Does anyone have more memorable mid-card gimmicks than Charles Wright? We’ve gotten The Godfather and Papa Shango and today I’m reviewing his ahead of its time, Kama, the Supreme Fighting Machine gimmick. And there’s still Nation of Domination Kama and The Goodfather. This guy was a constantly changing fixture of the WWE for two generations.

Kama was definitely a must-have. We’re running low on New Generation era heels and he battled most of the main level players in Bret Hart, Shawn Michaels, Diesel and The Undertaker. He’s a collector’s edition meaning in this case he’s exclusive to Walmart, but he shouldn’t be that hard to track down thankfully.

Packaging:  The standard Elite packaging is never as exciting as the WWE ppv theme lines and Kama has the gaudy certified authentic sticker as well.

The art shows Kama in all of his gaudy melted urn chain glory. His bio is basically summed up to one match although it seemed weird his membership in The Million Dollar Corporation wasn’t mentioned. 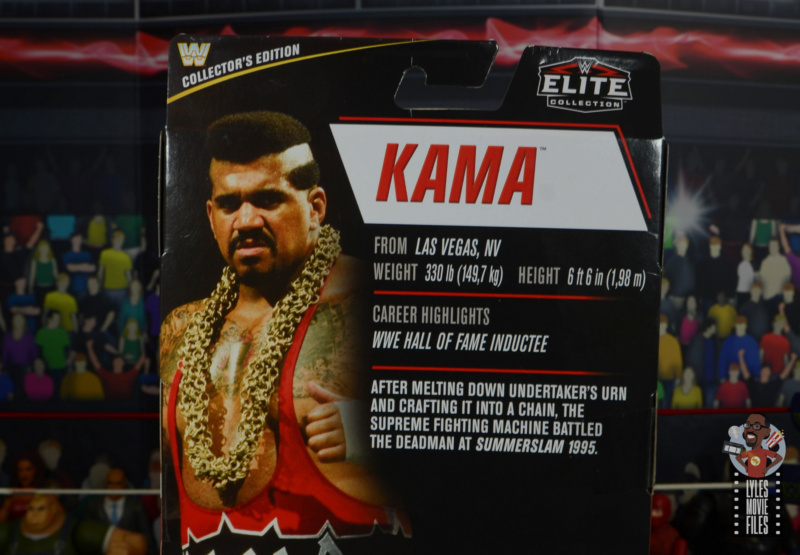 Likeness:  I like how all the Wright figures look similar, but they all have distinct elements so they stand out. Kama has more of a stern, no nonsense expression, which is fitting for his default demeanor. 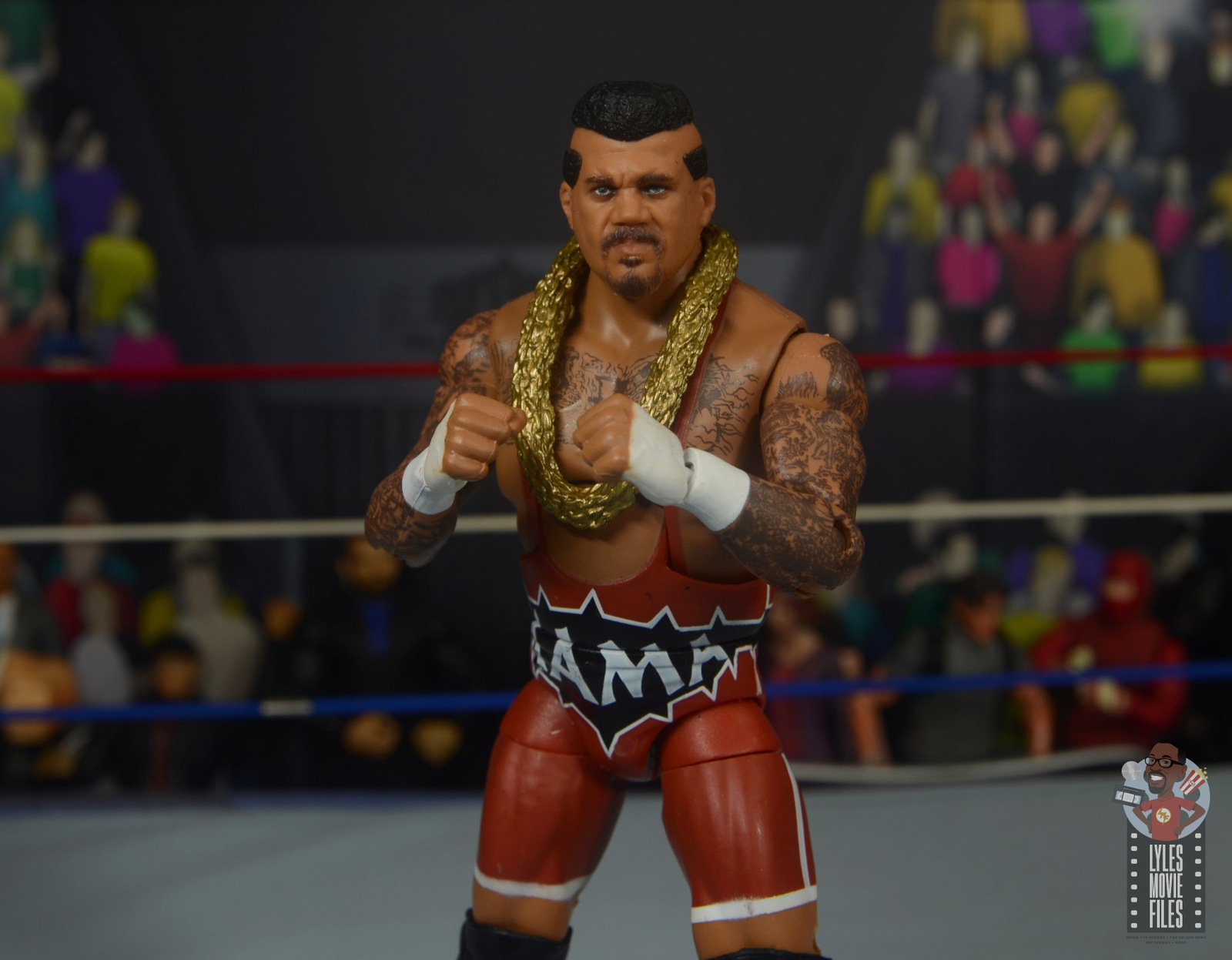 Clearly the highlight of the figure is the crazy hairstyle with the three striped Mohawk.

Kama was a burly dude and his sculpt reflects his size. The top half of his singlet is sculpted and Mattel even went the extra route to get Kama’s unique “UFC” style boots correct.

Scale:  Kama definitely looks like he could hang with The Undertaker with his size. 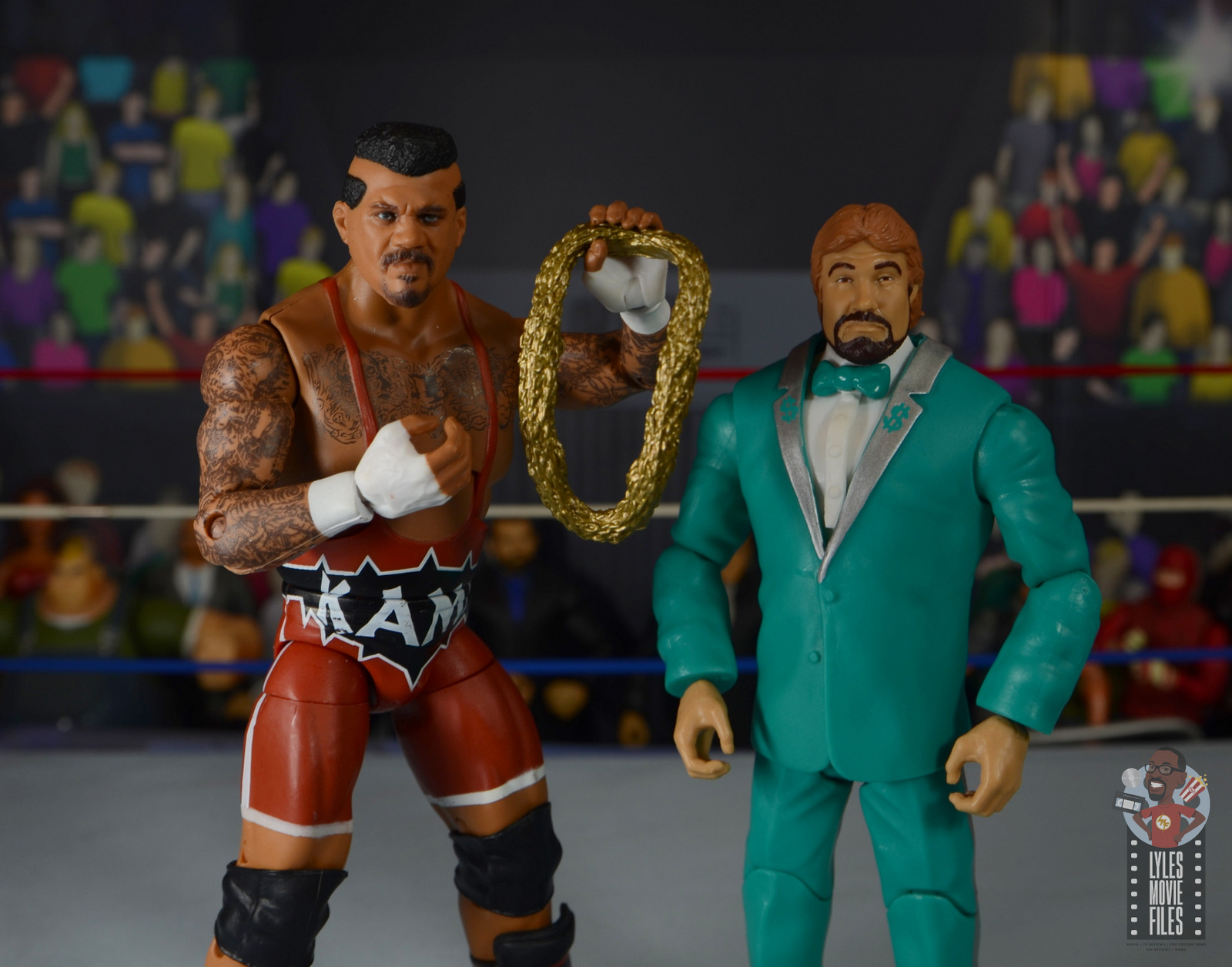 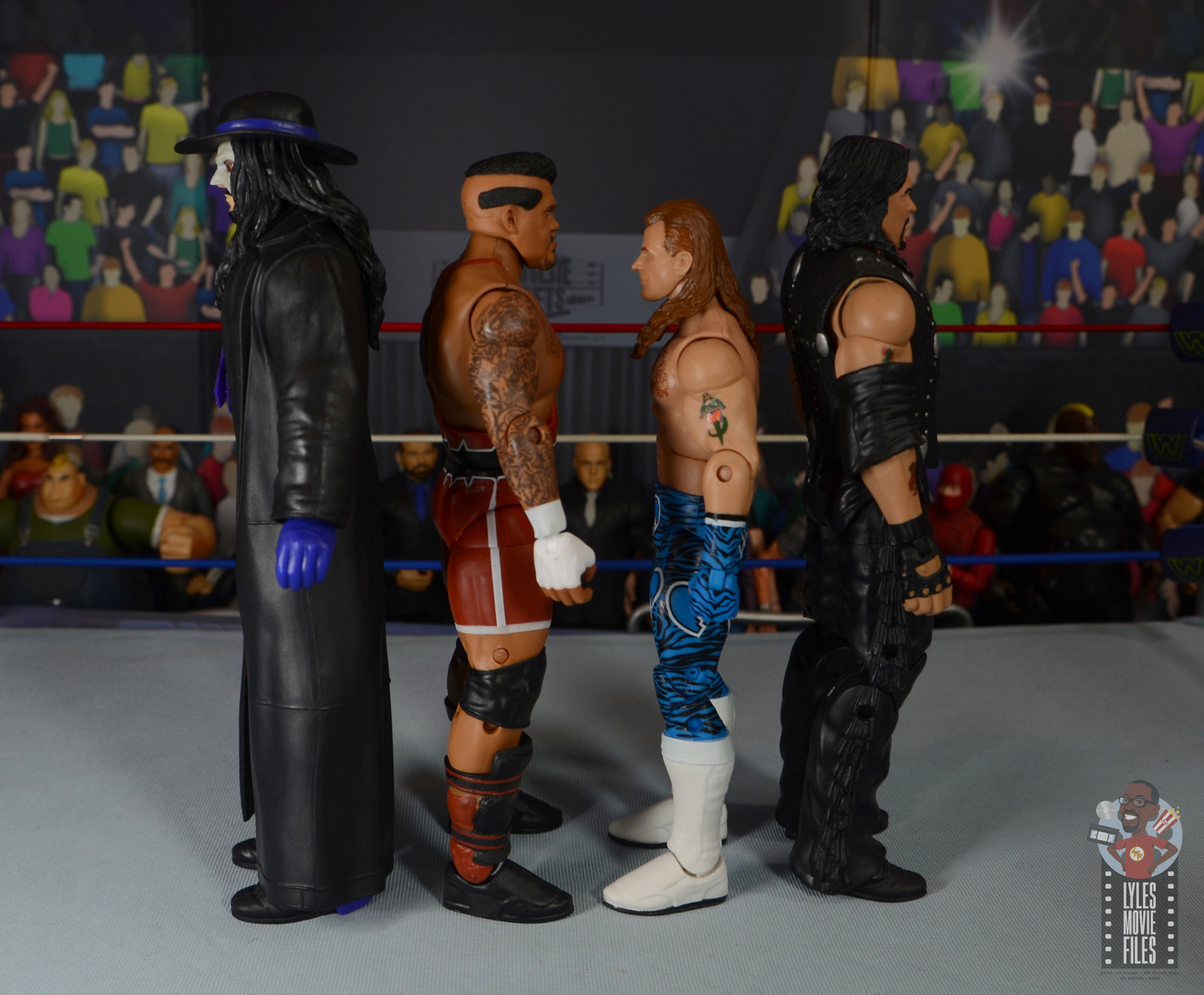 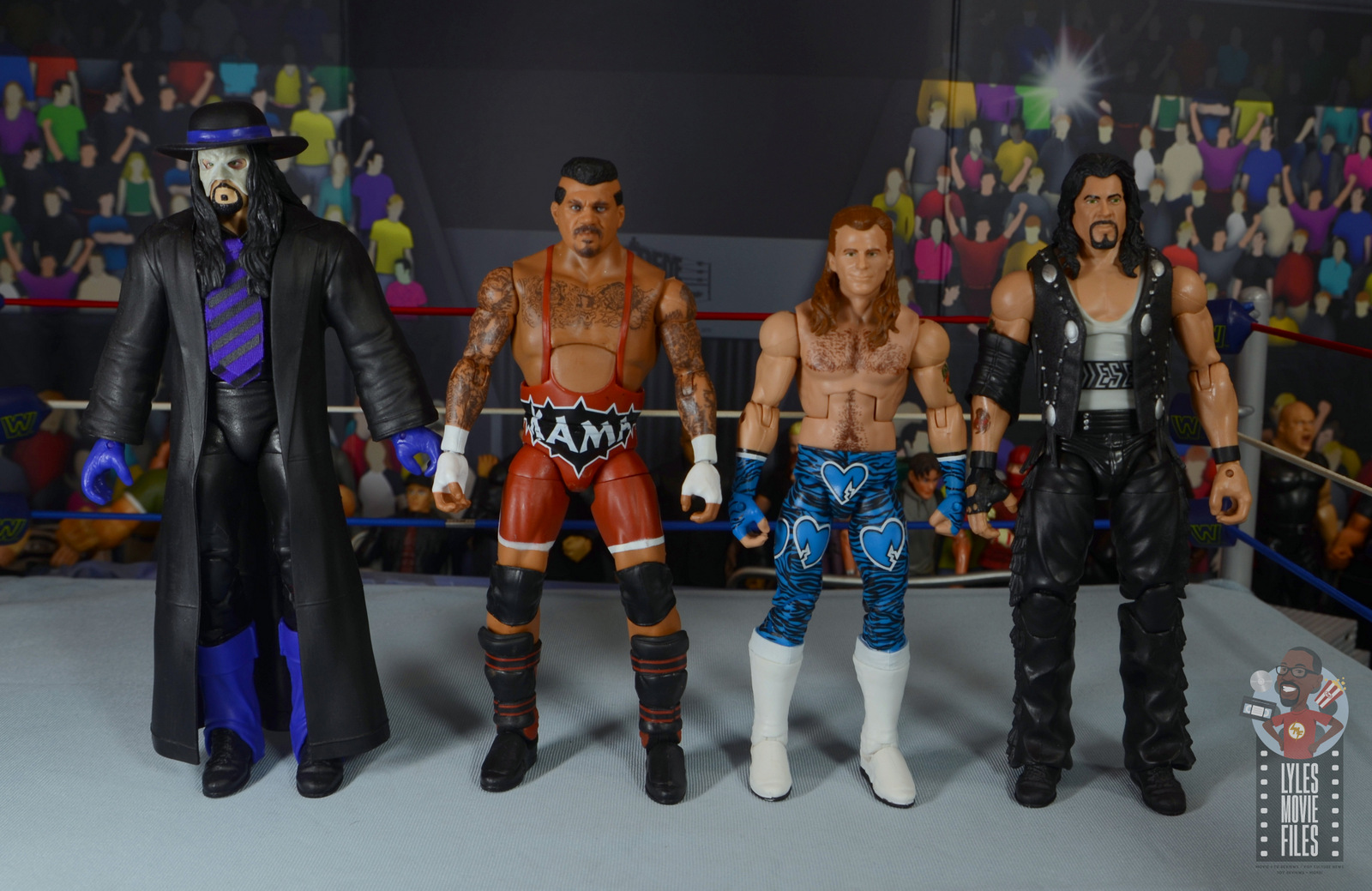 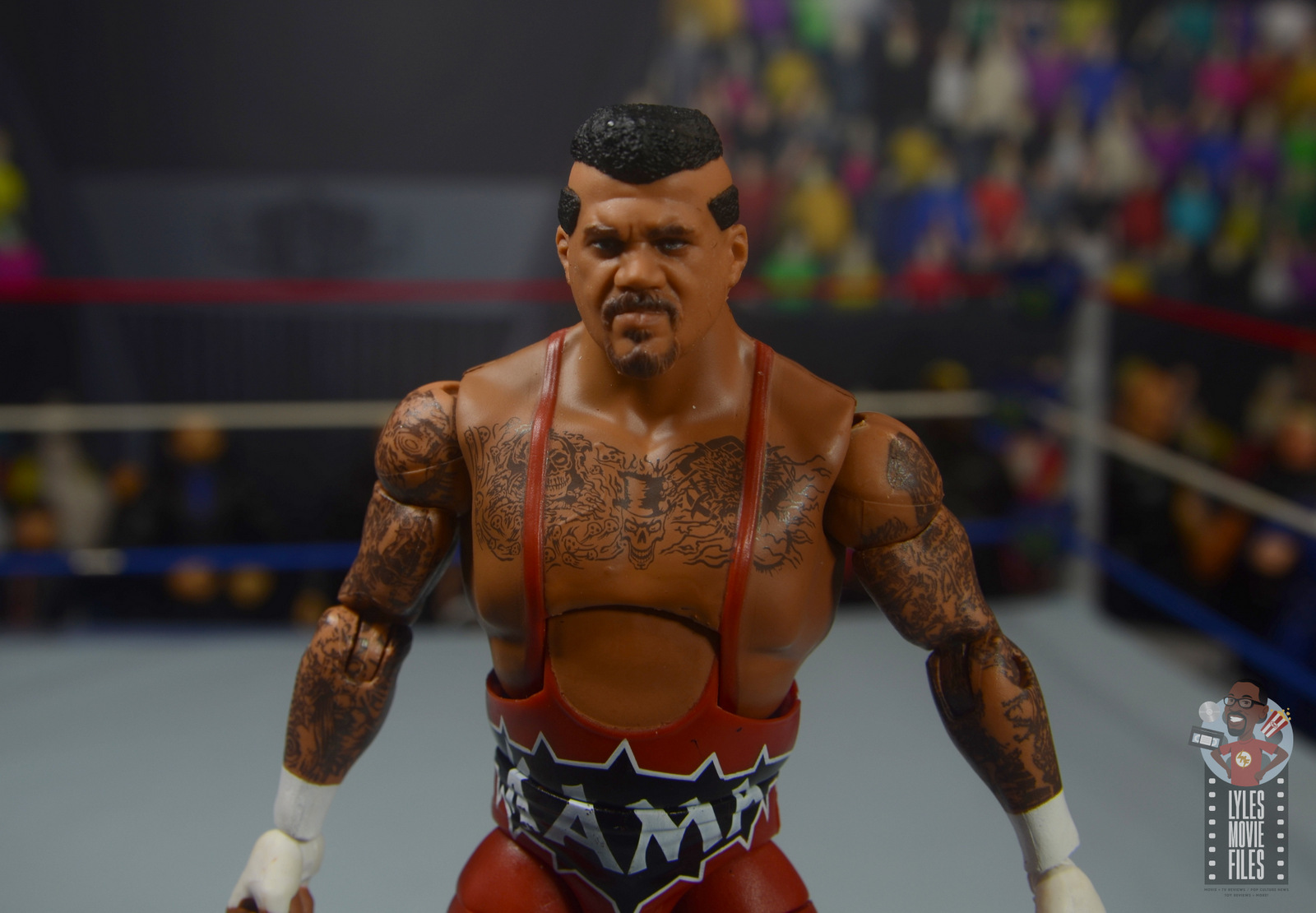 Paint:  The most impressive aspect of Kama is the tattoo work. The Papa Shango torso was leaner so you couldn’t appreciate all of them.

I didn’t notice until working on this review that as Papa Shango, Wright had two tattoos on his left and right pecs that he connected with a Papa Shango tattoo in the center.

Kama’s head sculpt turned out nicely with the True FX paint work getting all the appropriate details and proper weight to the goatee.

I was able to choose between three Kamas and most of the sketchy paintwork centered around his logo and that’s mostly due to the white not getting enough applications over the black paint. 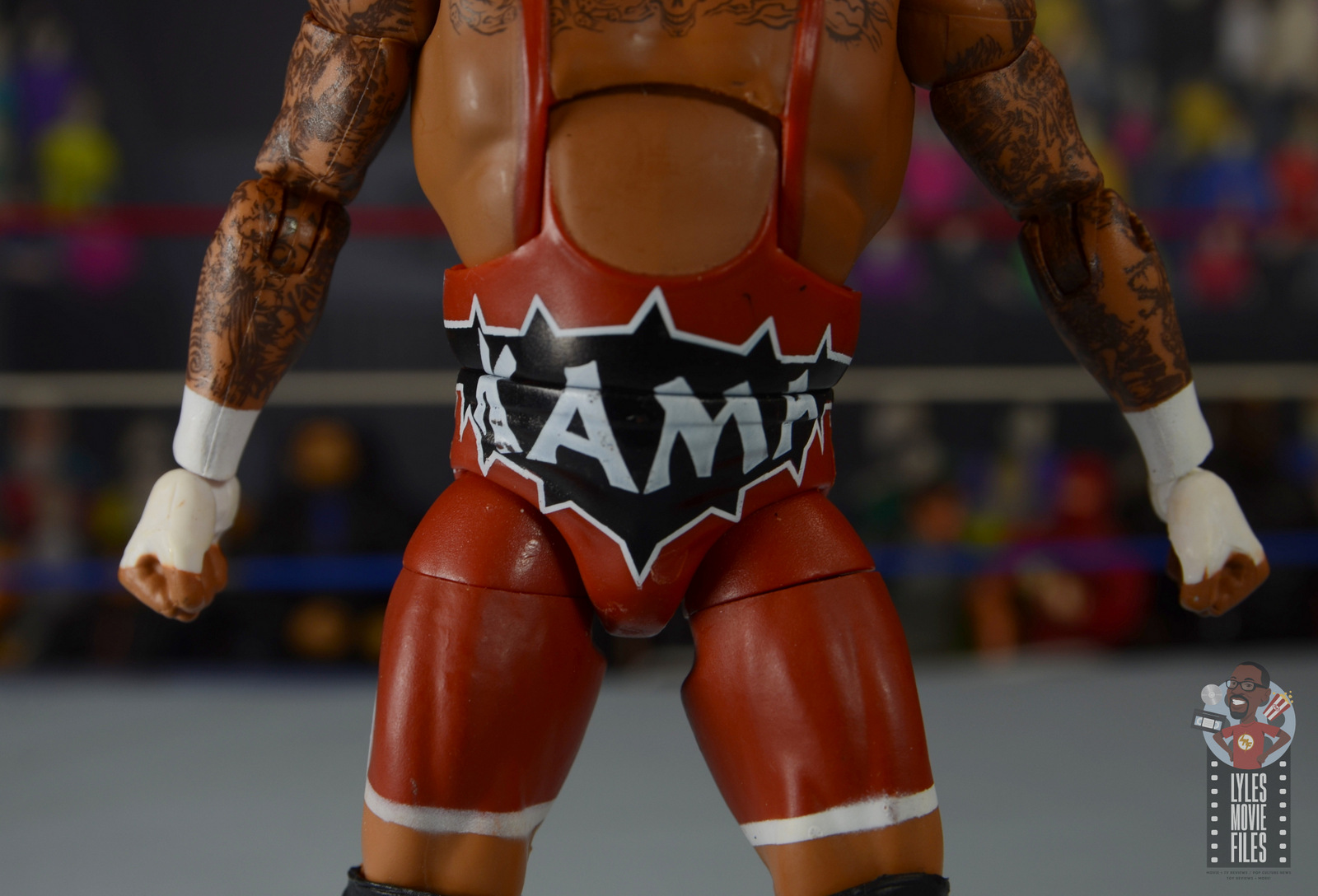 The border for his singlet has more of an airbrushed look than a hard fabric end to his attire as well. 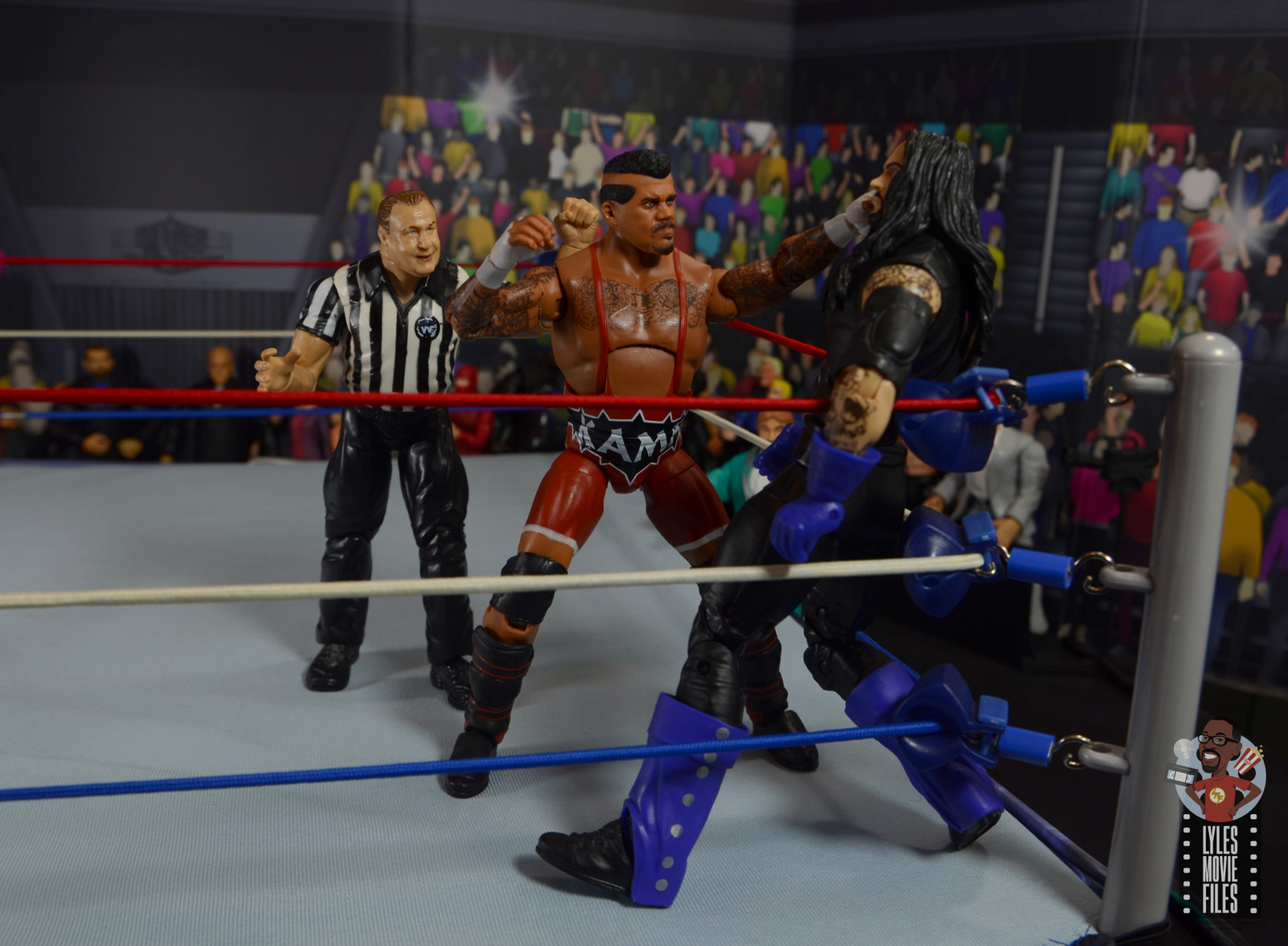 Articulation:  Kama was a big bruiser so he didn’t need the Ultimate Edition style articulation as badly as some other characters. 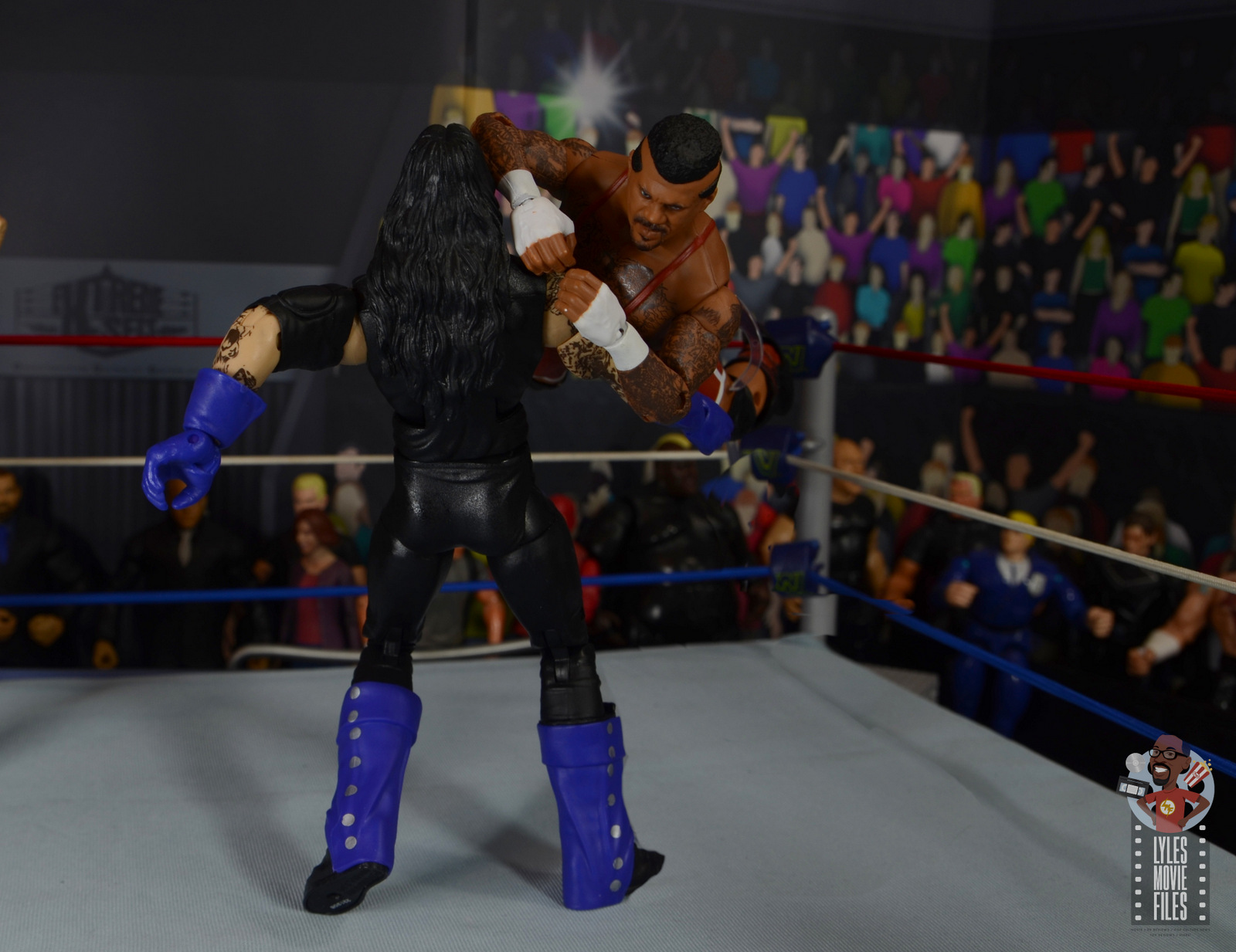 He just needs to do some punches, kicks, elbow and knee smashes. 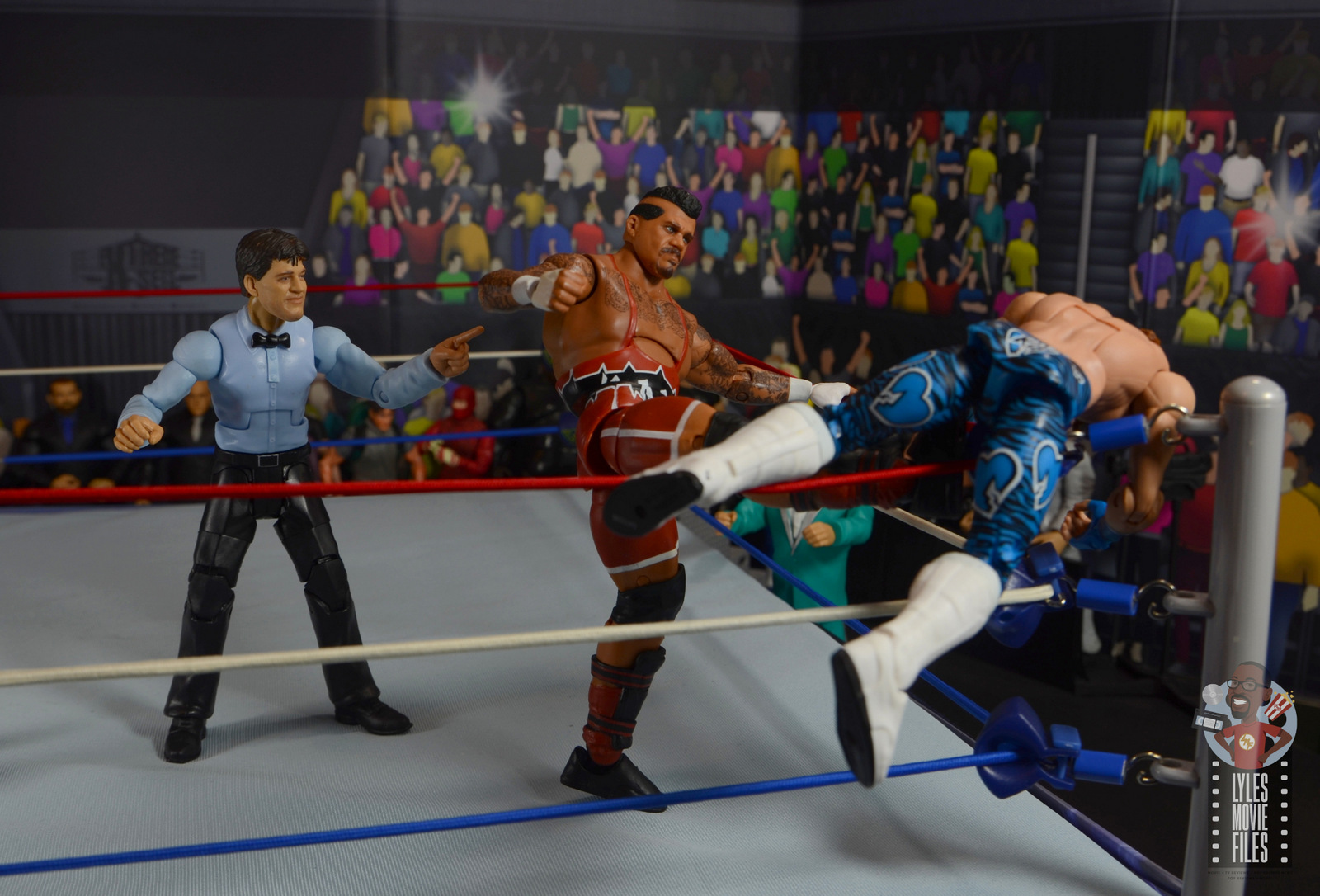 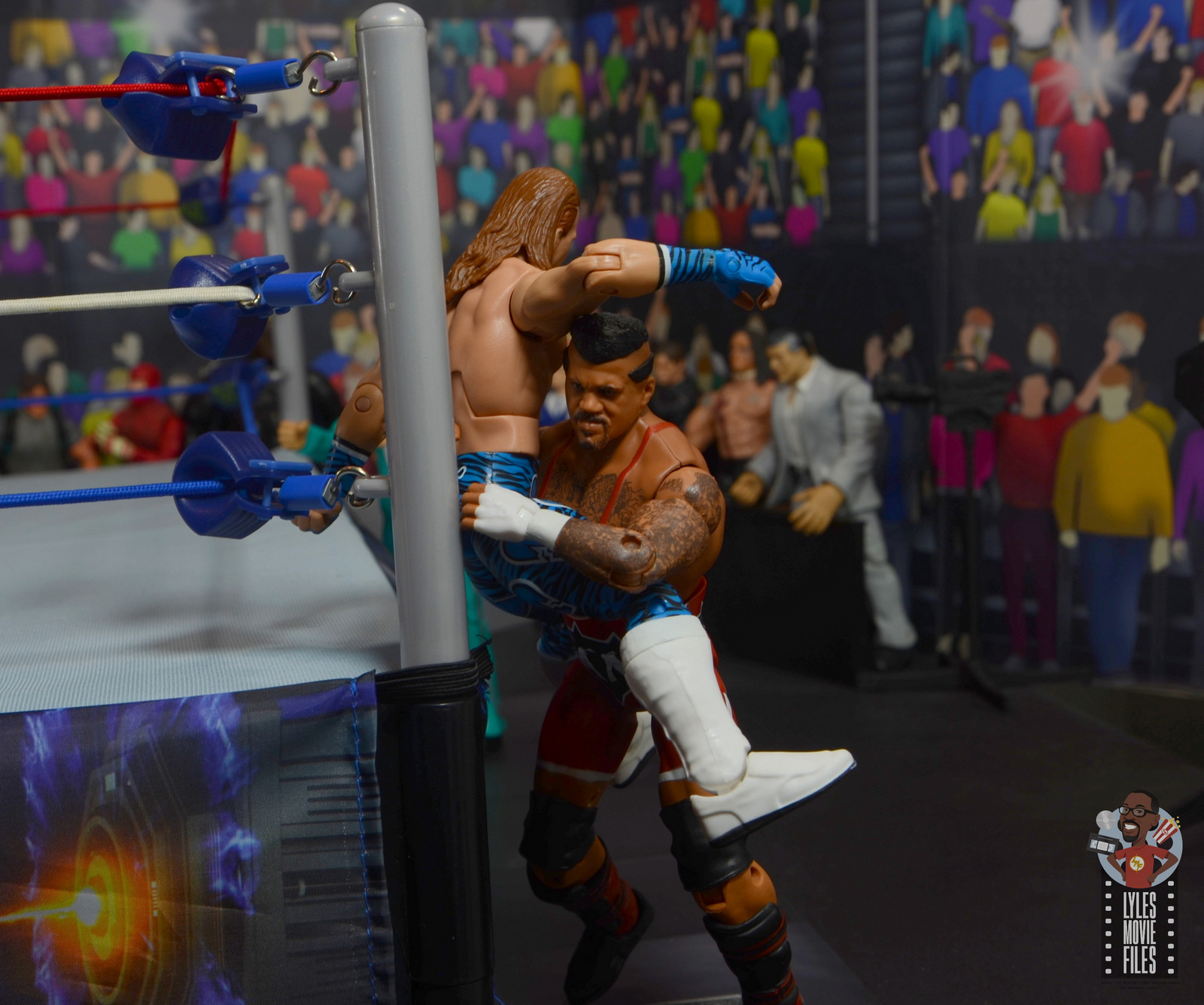 With his size and strong base, Kama was a really fun figure to pose. Like Io Shirai, I was very impressed with how he could pull off all his moves against other figures and how it just felt like Kama in action. 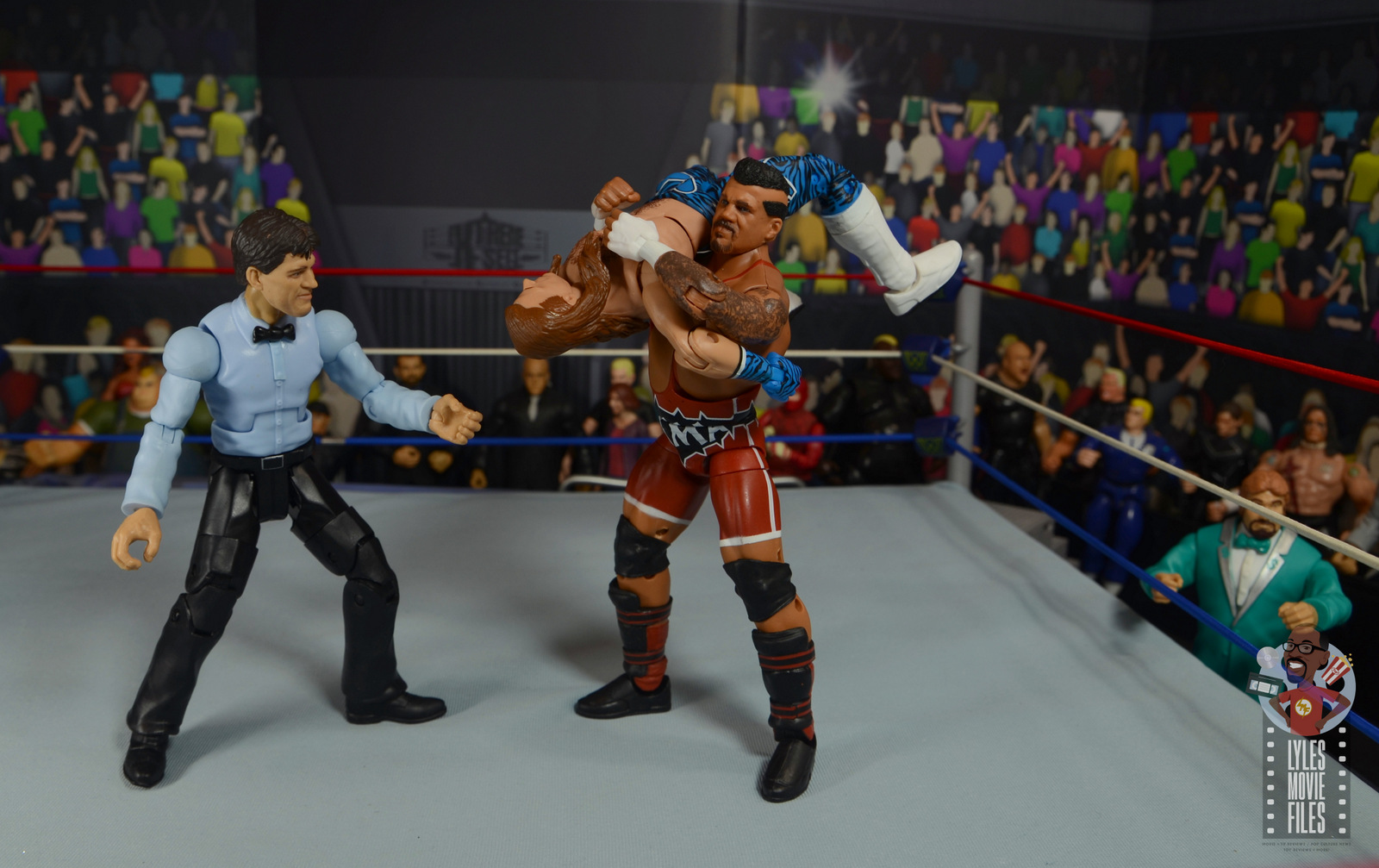 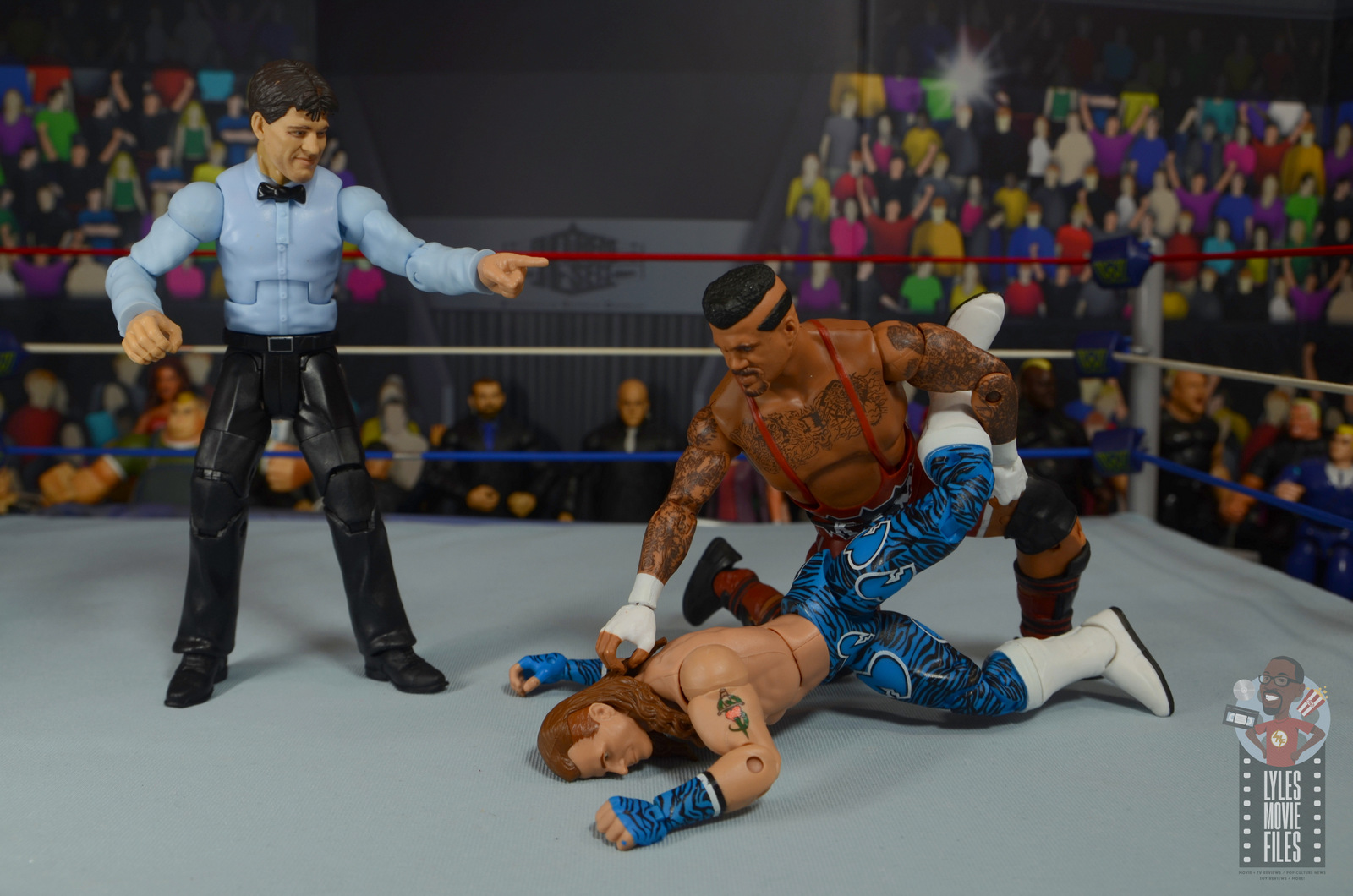 Accessories:  Kama doesn’t have a ton of obvious accessories so he gets swappable grip hands. He does come with a thick chain represented the melted down urn. 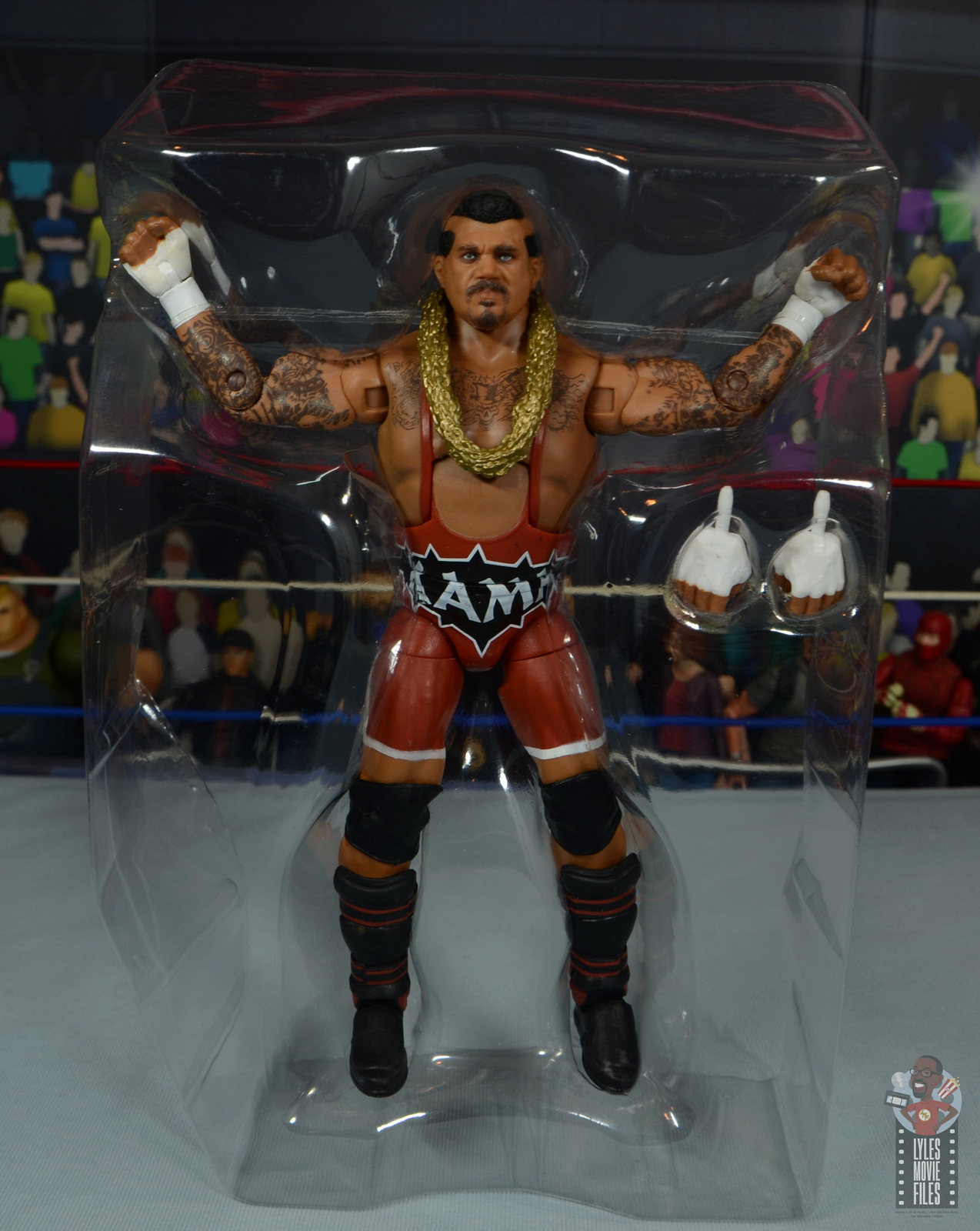 That’s a pretty great accessory in this case. This would have been a nice occasion to throw in a black bouquet stand of  flowers from The Undertaker.

Worth it?  I was able to track Kama down while Wal-Mart has the $16 price tag for Elites. That’s the sweet price point for this line since it lacks the extras of other lines.

This is a great bully figure that adds some credibility to the Million Dollar Corporation display and Mattel knocked him out. Now let’s get the NOD version next. 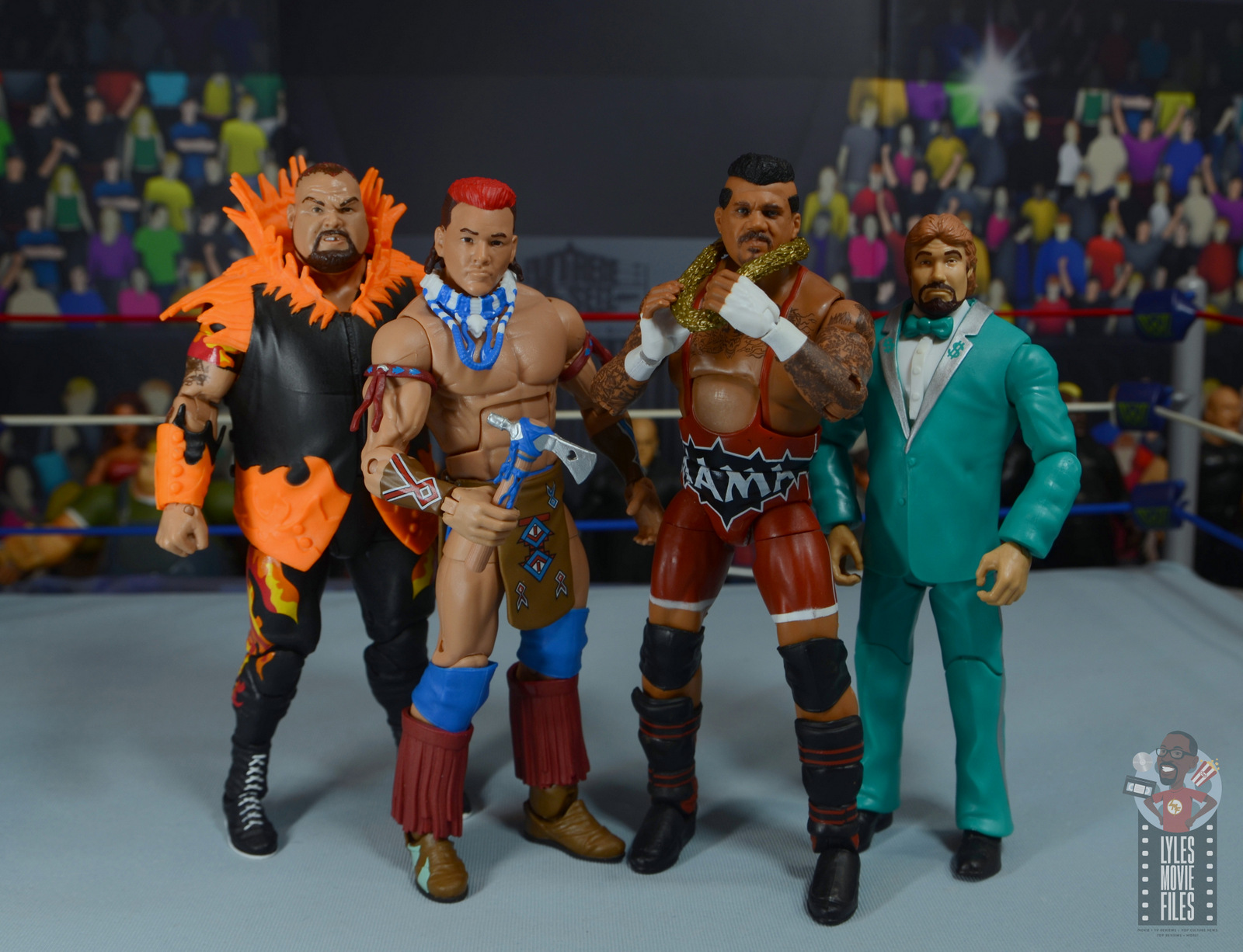 Where to get it?  You can find Kama and the rest of Elite 85 at Wal-Mart. Or you can always pay over retail now on Amazon.