Eternals is likely to be the most divisive Marvel Studios releases yet.

It’s a thoughtful, occasionally confusing and methodically paced introduction to the next superpowered group. Can they successfully follow in the footsteps of the Avengers and Guardians of the Galaxy before them or just serve as placeholders before the Fantastic Four and X-Men are introduced to the Marvel Cinematic Universe?

For most of the film, Eternals is set up nicely to be the next solid entry in the MCU. That’s before some puzzling and unnecessary twists. It’s probably not the best sign that the most exciting aspects of Eternals are the two post credit scenes.

Eternals was created to break the well-established and highly successful Marvel Cinematic Universe formula. That’s why Marvel Studios sought out Oscar-winning director/co-screenwriter Chloe Zhao (Nomadland) to helm the film. While Nomadland felt incredibly aimless and dull, Eternals has spark, action and fun. It just feels like it’s consistently being snuffed out.

Some of the problem is the number of Eternals. There’s eight of them, each with relatively complex backstories and agendas to explore. By comparison, the second Avengers film, Age of Ultron featured nine characters. Most of those characters were developed over the course of nine films.

And that was only after nine films spent developing them. And that doesn’t count for potential future Avenger Dane Whitman (Kit Harington, Game of Thrones). That’s not to suggest the various Eternals needed introductory origin films so much as this is an unwieldy amount of characters to properly develop.

And then there’s the Eternals’ mission. The Celestials, cosmic beings with incredible amounts of power, dispatch the Eternals to Earth in the prehistoric era. Since then, the near immortals have patiently guided humanity’s evolution while protecting them from the Deviants. The Deviants are an alien species of apex predators that feast on humans.

To their credit, Zhao and fellow screenwriters Patrick Burleigh and siblings Ryan and Kaz Firpo, navigate the characters decently. It’s more primer character development in the sense they’d be interesting enough to learn more about. It’s the layout and film’s structure that quickly becomes tedious. 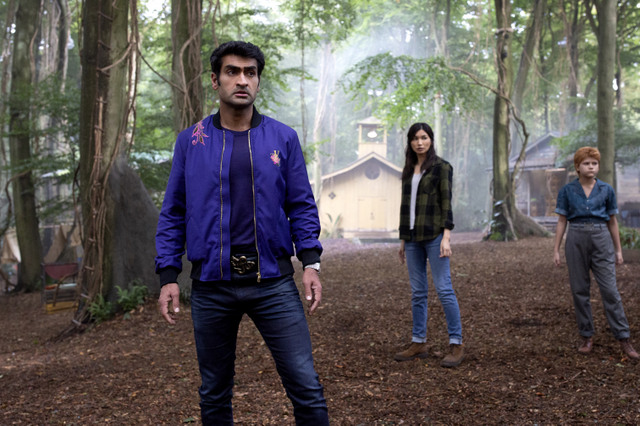 After one of their own is killed by an evolved Deviant, the Eternals reunite. It’s been decades since some have seen each other. The standard format is to spotlight one Eternal in a flashback scene as the others arrive. Character X gets the bad news that one of their own is dead and joins the party to stop the Deviants.

Some of these spotlights are more interesting than others. Others would have been fine a brief conversation. Eternals is two hours and 37 minutes and it rarely feels like it’s flying by despite the plot they uncover that could destroy Earth.

These planet-wide emergencies in a post-Avengers world seem odd. In the comics, if the Fantastic Four were responding to an emergency, there’d be a quick panel showing the Avengers on standby. Maybe that’s a tactic MCU filmmakers should adopt? If just to show the other heroes are at least prepared to step in if needed.

Despite the lengthy setup, the Eternals feel more like character traits than characters. Having Dane partner alongside them would have allowed for an easier entry point than the flashbacks and likely better character interactions. Instead, he’s sidelined early on with some teases of his super heroic path.

This becomes another issue with Eternals. It’s written more in line with the expectations that the viewers have a vast knowledge of the Marvel Comics universe. Earlier MCU films had little comic book Easter Eggs.

Eternals wants its audience to be fluent in Marvel-ese as a prerequisite. Not just from the Marvel movies, but actually keeping up with the most recent MCU Disney+ series.

That’s what makes the twist late in the film so surprising. Surprising in a Quicksilver getting killed by bullets he sees coming kind of way — not Captain America summoning Mjolnir way. Inconsistencies with what can kill one Eternal compared to another is also frustrating since the rules switch based on the character.

This is another major problem. As Phase 4 starts, Marvel Studios would be best suited building up some death equity. There were a smattering of heroes killed over the course of the first three phases, but not to the extent we’d see in Avengers: Infinity War and Endgame. That helped make those deaths mean something. Killing off new characters that have just been introduced doesn’t have the same impact.

There’s references to Superman and Batman in Eternals, which is ironic in the sense that Eternals feels more in line with a DC Extended Universe film than the normal MCU effort. Zack Snyder’s Universe dealt with superheroes in a less jovial, likely more realistic manner. The Snyderverse heroes felt like they were on a job while the Avengers, Guardians, Spider-Man, etc. could still have fun.

When Eternals has those fun moments it feels like this is the track it should stay on only for the latest killjoy moment to spoil the fun.

Eternals commendably features Marvel Studios’ most inclusive cast yet with multiple ethnicities represented, a deaf actress and actresses over the age of 45. Losing some of that diversity for the sake of highlighting the threat of a villain feels lame.

Marvel execs have touted Eternals for its love story with Ikkaris and Sersei. They get the distinction of the first couple to have a sex scene in an MCU film. Madden and Chan have OK chemistry, but the romance never feels like the backbone of the story as intended.

Henry is fantastic as the genius creator that’s always conjuring up some new device. Nanjiani gets to provide most of the film’s natural comedy as Kingo is the one Eternal that is enjoying the good (immortal) life. Keoghan makes Druig the most complex Eternal as he’s not above using his powers to stop humanity from harming each other even if it’s unethical.

Jolie’s character suffers from a form of mental illness. That’s a fascinating subject matter for a comic book hero with limitless power fighting her mind as much as any villain. Jolie gives this subplot the ideal amount of grace and dignity making for one of the film’s highlights.

The script tackles weighty subjects like conviction and belief. This makes for interesting conversations, but ultimately it’s set aside to get to the standard comic book action.

Most impressively is how Zhao incorporates the comic book action on a team level. The fight scenes are very well laid out and clear with creative uses of powers.

Zhao and her co-screenwriters struggle giving Eternals its unique identity and merging that with the usual MCU film.

Maybe it’s a result of that formula being so effective, but had Eternals stuck to the multi-million dollar blueprint tighter, it could have been one of the more fascinating MCU entries instead of the most disappointing effort to date.

Read about the Eternals in Eternals by Jack Kirby: The Complete Collection on Amazon.