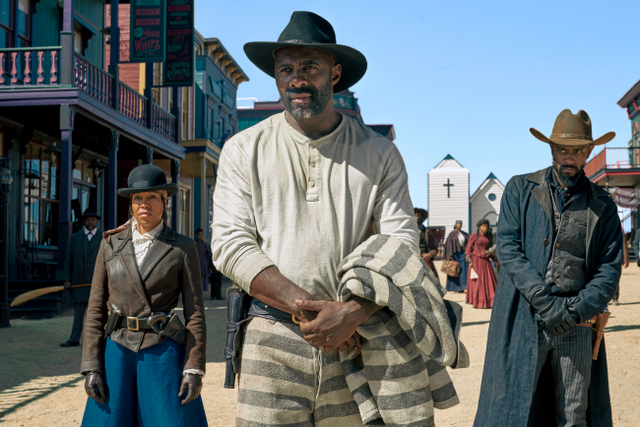 The list of black Westerns is criminally short. There’s Posse and then you have to start qualifying to Westerns with black leads like Blazing Saddles and Django Unchained. It’s not the most popular genre for filmmakers to explore despite the not so loudly touted history of black cowboys. The Harder They Fall aims to pull a chair at the saloon with a look at real black figures during the mid to late 1800s.

It’s far from perfect, but for open-minded viewers that can look beyond a John Wayne vision of Westerns, there’s plenty to appreciate.

For starters, the cast is incredible.

Director/co-screenwriter Jeymes Samuel has an amazing ensemble to take through the Wild, Wild West. It’s impossible to have a terrible film with Idris Elba, Jonathan Majors, Regina King, LaKeith Stanfield, Delroy Lindo and Zazie Beetz in prominent roles based on actual people. 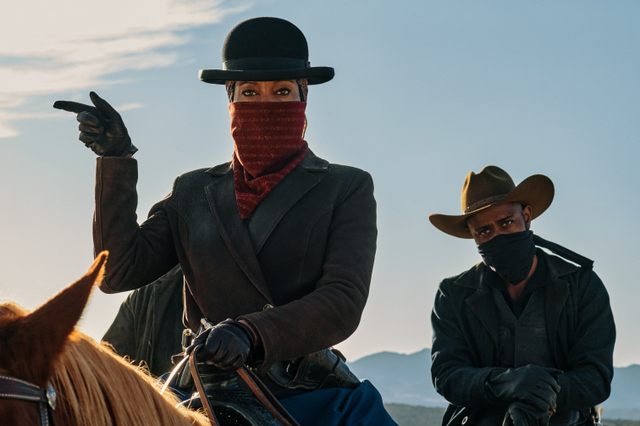 Samuel and co-screenwriter Boaz Yakin (Now You See Me) take some liberties with the characters’ lives and fates. They also infuse a more modern approach — there’s no sexual discrimination for example as the women are treated as equals.

The film opens in traditional Western style. A man touting gold laced pistols guns down a young boy’s parents and carves a cross on his forehead. Now grown up, Nat Love (Jonathan Majors, Loki) has created his own band of notorious outlaws in his pursuit of the gang that robbed him of his family.

With Rufus stuck in a life prison sentence, Nat can’t get to him and can settle down with his on- and off flame Mary (Beetz, Joker). But it’s not time to hang up his holster just yet. 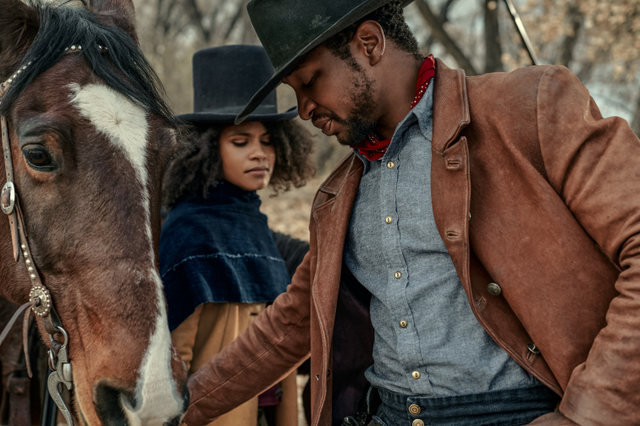 Rufus’ gang, led by Trudy Smith (King) and Cherokee Bill (Stanfield), free him from custody so Rufus can reassert control of the town he founded. This is one of the film’s finest scenes in how Samuel shoots the gang strolling through the train cars and the escalating tension as they reach Rufus’ car.

Stanfield is effortlessly cool as he assures the passengers their won’t be any problems if they don’t start anything. King is stellar in this sequence as well as she eyes Rufus’ guards and conveys so much dialogue without saying a word. King’s Trudy clearly seems like a character that should have a featured role in a prequel/sequel. 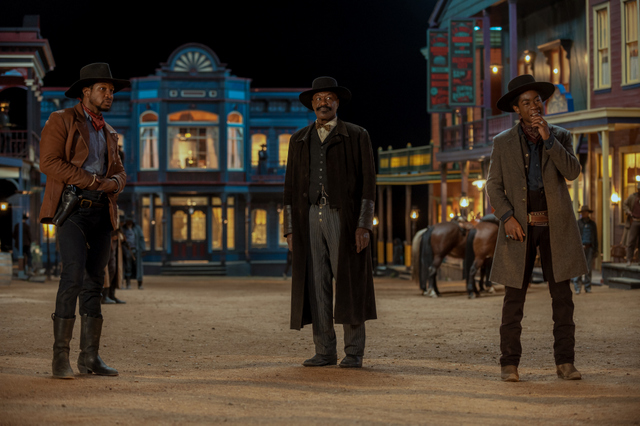 After learning of Rufus’ escape, Nat has to ride into action one more time for vengeance and payback — two clear and obvious Western staples. This time he’s joined by marshal Bass Reeves (Lindo).

Reeves was the first black deputy U.S. marshal west of the Mississippi River. Mary and her saloon bouncer, Cuffee (Danielle Deadwyler), crash the mission along with Bull and Jim as they set off on their collision course with Rufus’ gang.

Character development is in short supply for most of the ensemble despite the hefty two hours and 19 minute run time. Jim’s driving plot point is to prove he’s a faster draw than Cherokee Bill. Bill Pickett has even less of a subplot and it’s never quite clear why Reeves is helping Nat’s gang take down Rufus.

This is where serving too many characters becomes an issue. Even Nat and Rufus lack the kind of narrative attention one would expect as the main characters.

These characters probably would have been better served as the focus in standalone films to better showcase them and be more historically accurate. For example, Cherokee Bill ran with a different gang and didn’t align with Rufus.

And in keeping with some Westerns, the villain gang is more charismatic and interesting than the heroes.

I’d happily watch King, Beatz and Deadwyler in a film about black women who were outlaws in the Wild West era. The genre typically didn’t have women and children getting killed in shootouts. Samuel and Yakin subscribe to that mindset essentially placing Mary, Trudy and Cuffee in protective bubbles. 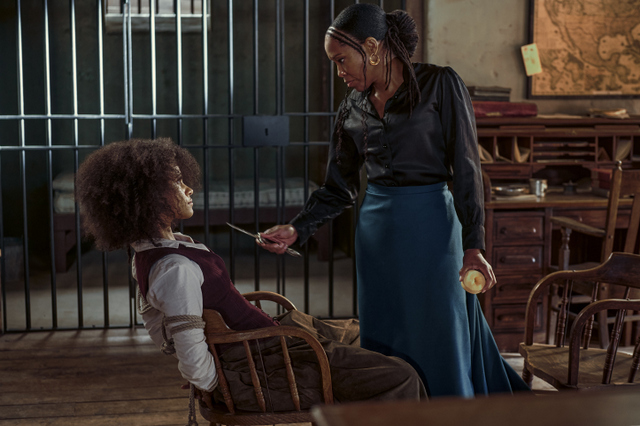 This creates a set of alternate roles for the women who can only be subjected to harm by each other — but only to a certain point. Imagine how lame Set It Off would have been if a dude rolled with Queen Latifah’s squad and couldn’t be killed.

There’s some elements of Quentin Tarantino films here like the occasional winking at the audience captions, some violence that comes off cartoonishly gratuitous and a modern soundtrack that doesn’t always work with the scenes.

Samuel worked on Baz Luhrmann’s The Great Gatsby as the executive music consultant. On Gatsby, the mix of braggadocious hip hop songs not surprisingly worked seamlessly with the celebration of excess in the 20s period piece.

Here, the various genres explored feel like they belong in another movie entirely.

The set design feels like the kind created in a movie about making a Western. Towns rarely look lived in with pristine fronts with zero wear and tear. It looks like a movie set. One that’s well designed yes, but hardly maintaining the illusion that this occurred in the late 1800s. 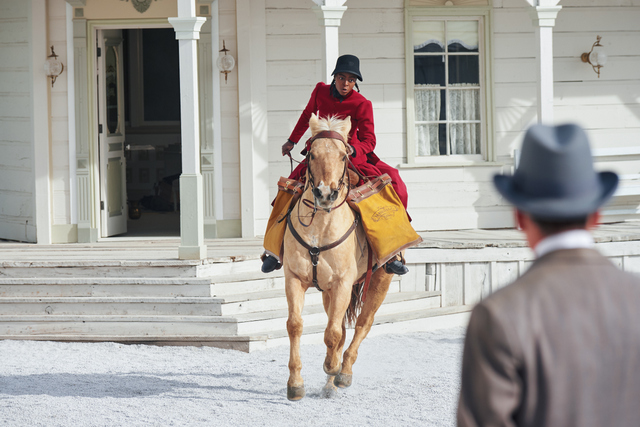 When it’s time for the grand shoot out, Samuel acquits himself well in part because he has some familiarity with the premise.

The Harder They Fall isn’t the first time Samuel has explored the black Western or some of these characters. In his 53-minute 2013 directorial debut, They Die By Dawn, Samuel incorporated Nat Love, Bass Reeves, Bill Pickett and Stagecoach Mary as main characters.

With a larger budget, Samuel is able to incorporate some stylish elements like the intricate lighting in Rufus’ saloon in addition to a spectacular final fight. 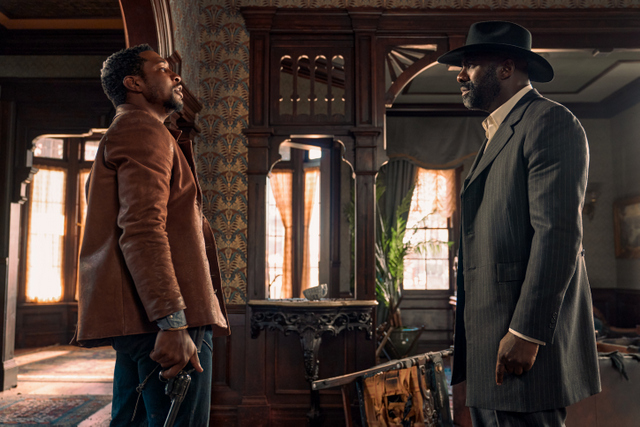 It’s commendable that Samuel wants to shine a spotlight on historical black figures during the Frontier Era. The Harder They Fall has some significant problems that hold it back from being a modern classic, but hopefully it will spark renewed interest in the African American adventures in the Wild West.

Check out the soundtrack of They Die by Dawn from Samuel at Amazon.