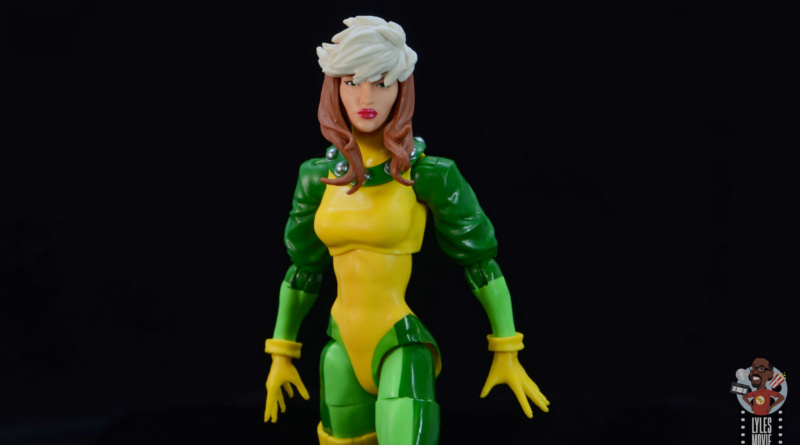 Age of Apocalypse is one of my favorite X-Men stories. It was a very creative take on the established status quo with some big changes to provide an extended What If? scenario.

My favorite title of the AOA era was Astonishing X-Men thanks to the strong cast and amazing artwork from breakthrough artist Joe Madureira. Rogue led this squad and it was the first time she was positioned in a leadership role in any of the X-books.

That made her an essential character to get in Marvel Legends. As one of the more interesting looks for Rogue I was looking forward to this one. Let’s see if this alternate take of the Southern Belle is a success.

Packaging:  No changes from the first series with the AOA font used for the X-Men logo and the red and yellow color scheme. I also appreciate that Hasbro had David Nakayama provide the artwork.

Nakayama captures the essence of the characters so well and it’s cool to see the homage to Astonishing X-Men #4 and the subtle glare is perfect. 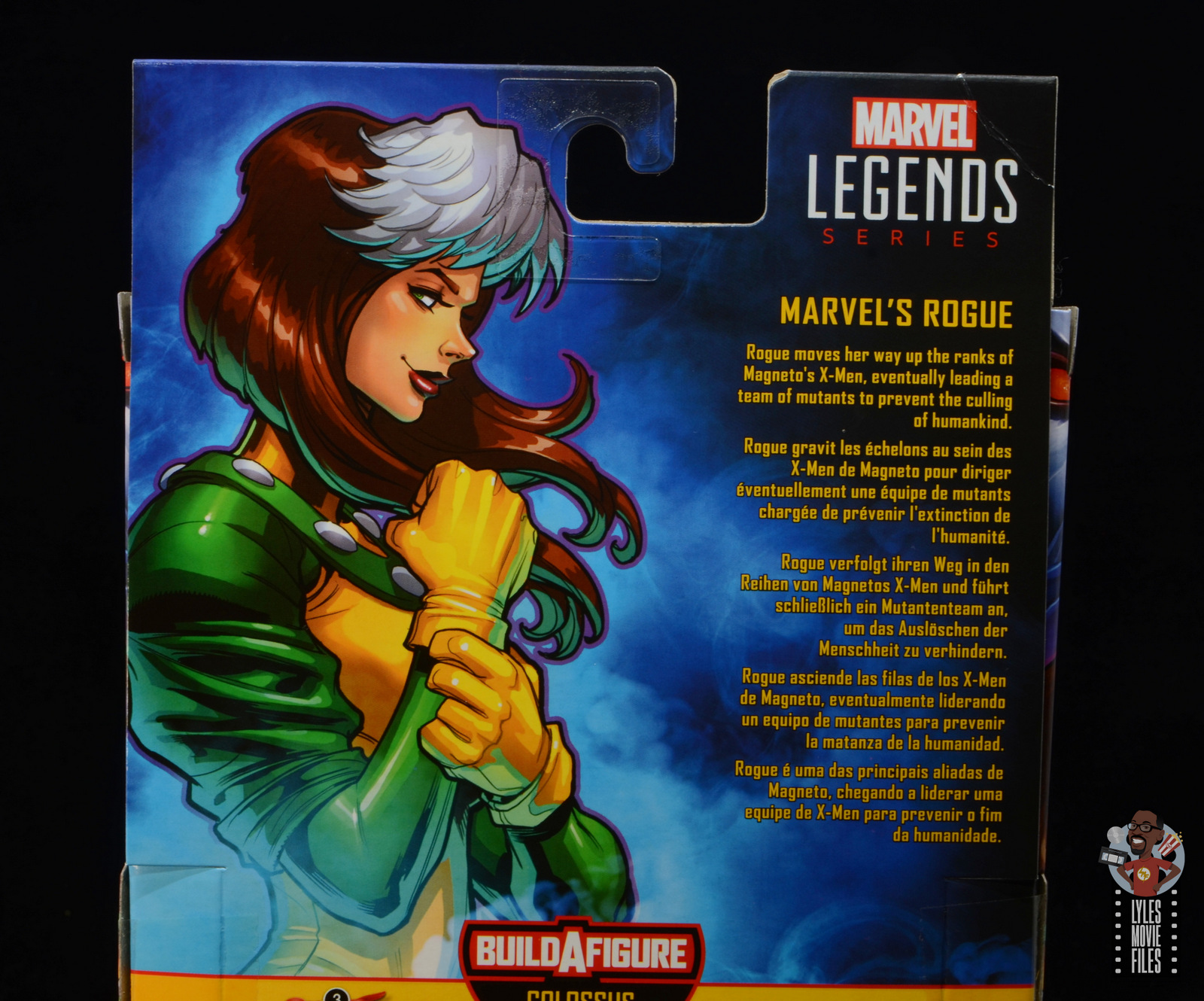 Her bio is actually solid and tells a decent story of her journey in AOA.

Likeness:  I love the work on Rogue’s head sculpt. It features her poofy hairstyle and the strands of her hair is very well done. Her head sculpt itself is also really nice showing a less cheery and focused Rogue. 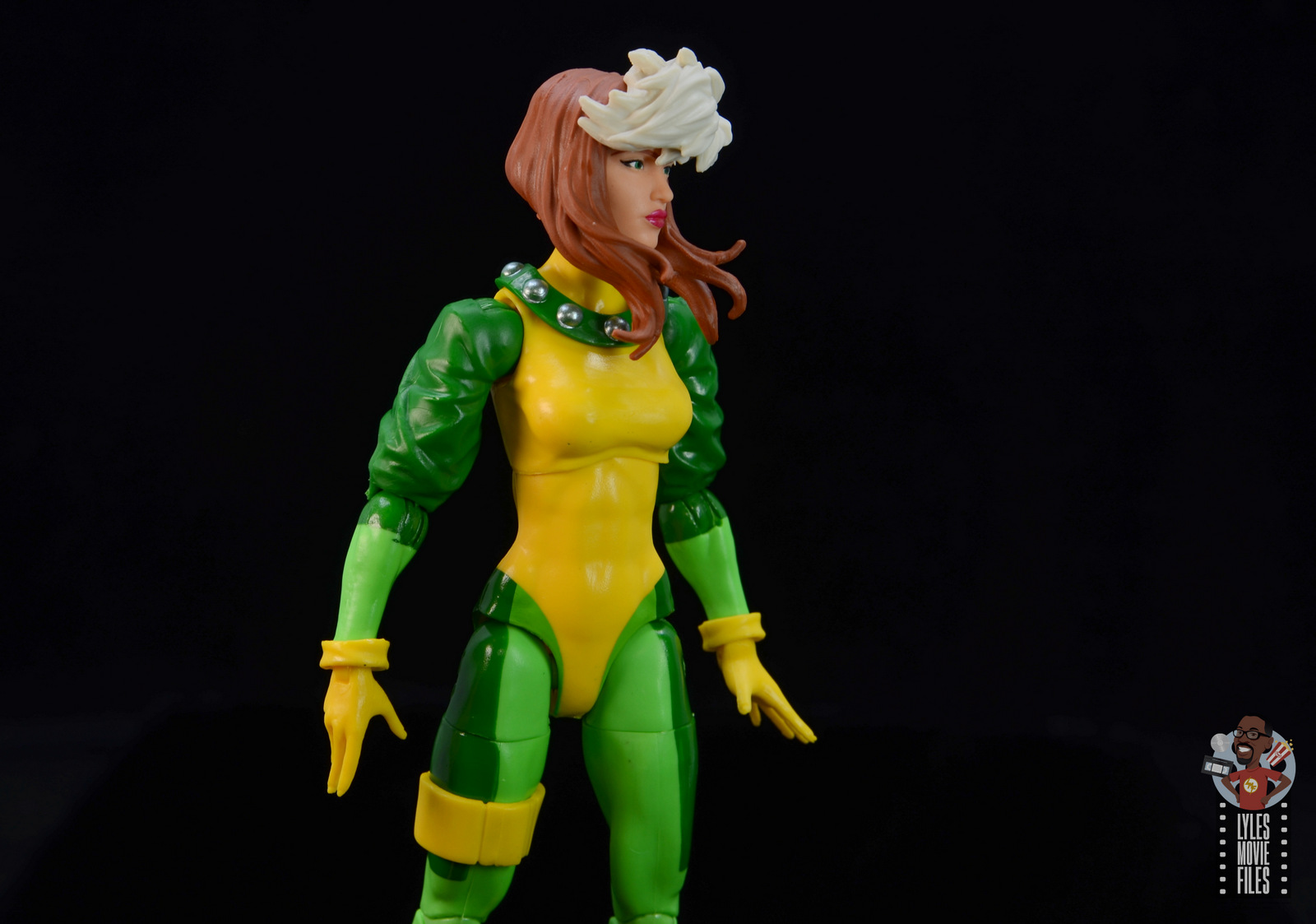 Hasbro didn’t miss any of the important elements of her outfit either. Whether the studded collar, which was definitely a Magneto influence on her and the rest of the team, the flared sleeves to the random pouch belt on her right thigh and the large moon boots. 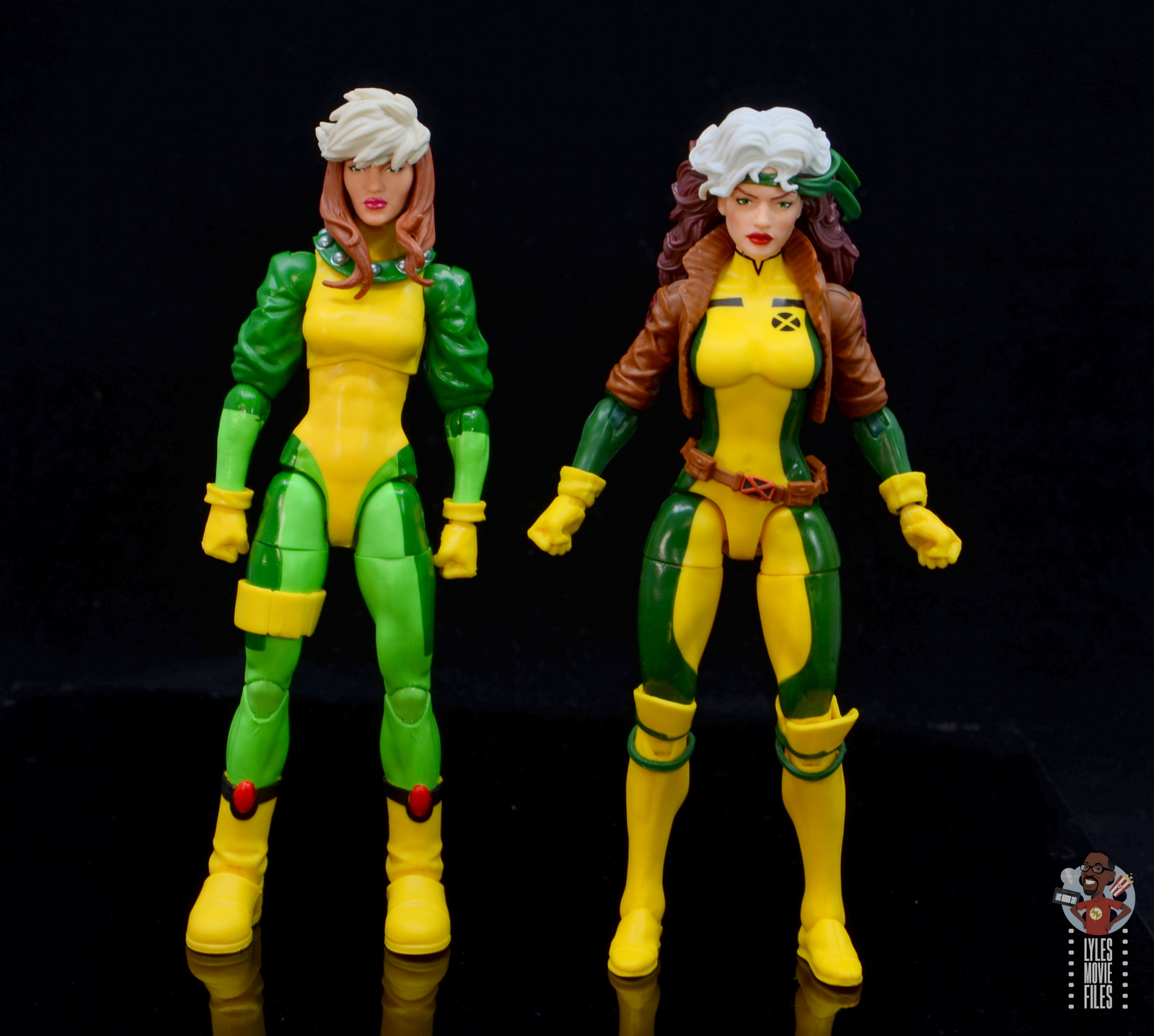 The gem on the boots was also thankfully sculpted and not just left for the paintjob. 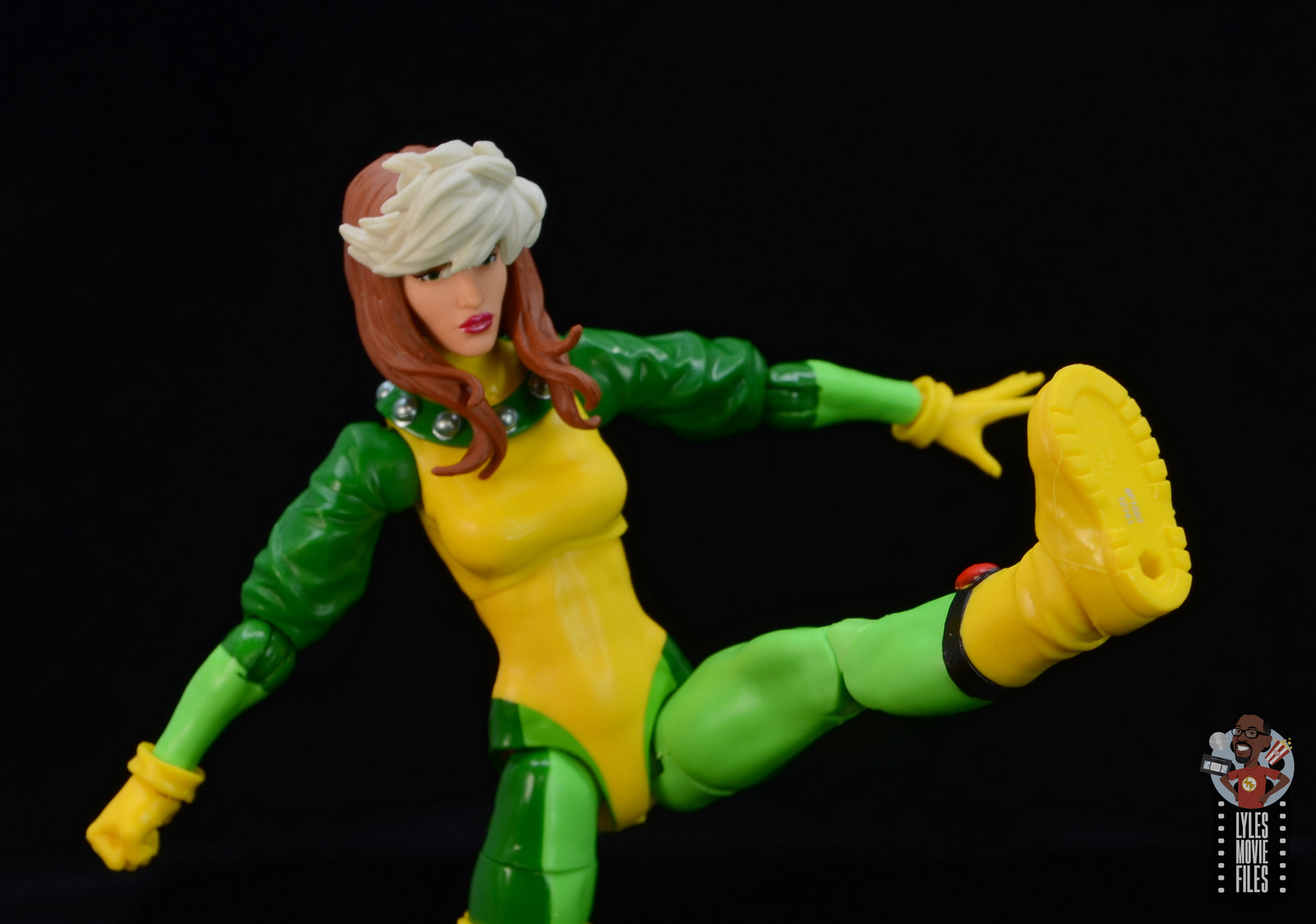 I do wish Hasbro would just glue down the glove bits at the wrist so they didn’t ride up the arm. That’s a small quibble on an otherwise exceptionally well done figure. 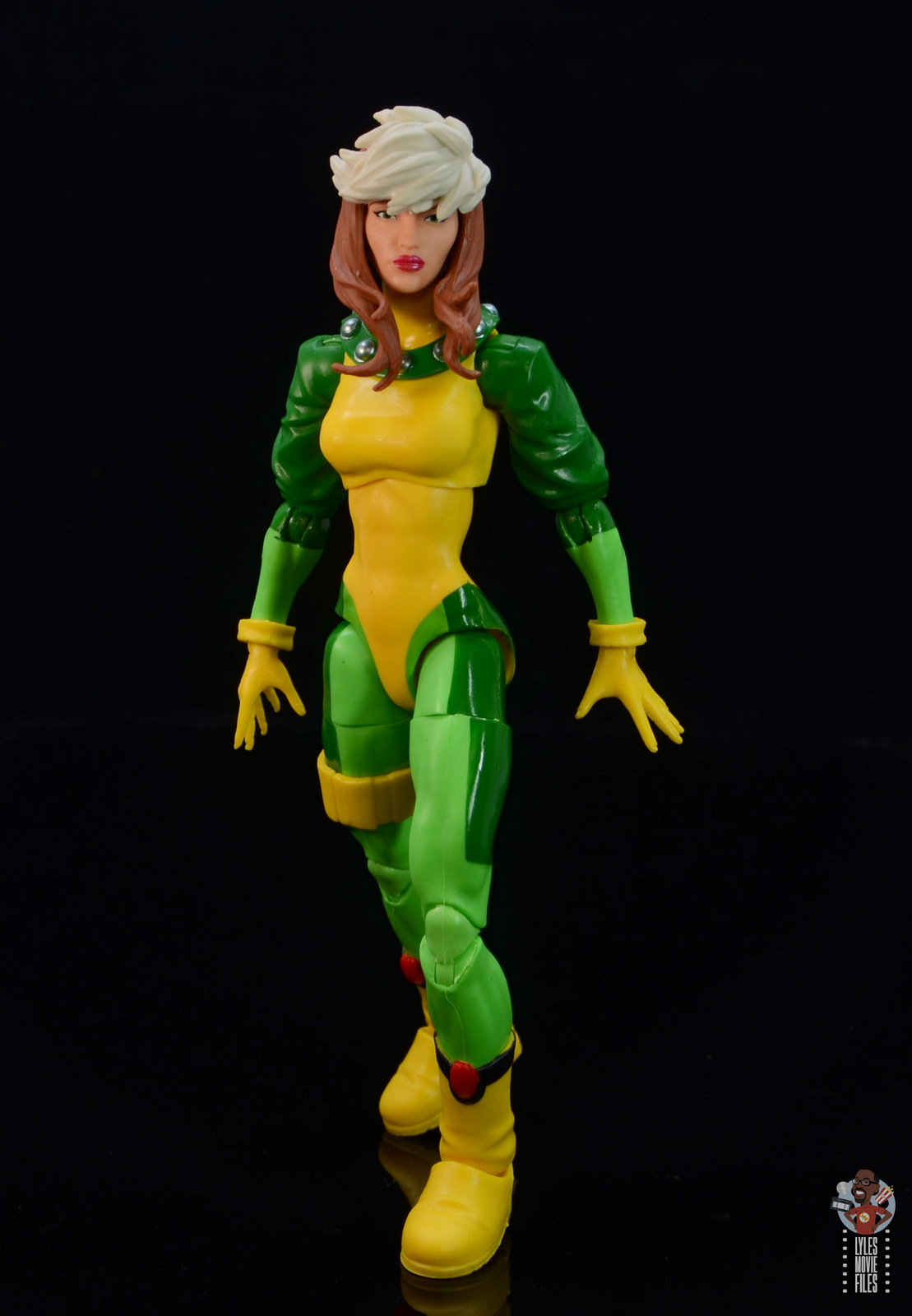 Paint:  This is one of Rogue’s more colorful attires and Hasbro did a great job pulling it off. The linework is clean with not a lot of bleeding of colors from one section to another.

I’m not sure how this could have been easily avoided, but there’s some spillage with the silver studs on her collar piece. There’s various shades of green along with bright yellows and a dash of black and red.

Scale:  Rogue lines up pretty well with the Jim Lee figure so at least her scale is consistent in different eras.

Compared to the rest of her squad, Sabretooth and Morph should be the only ones taller than her. 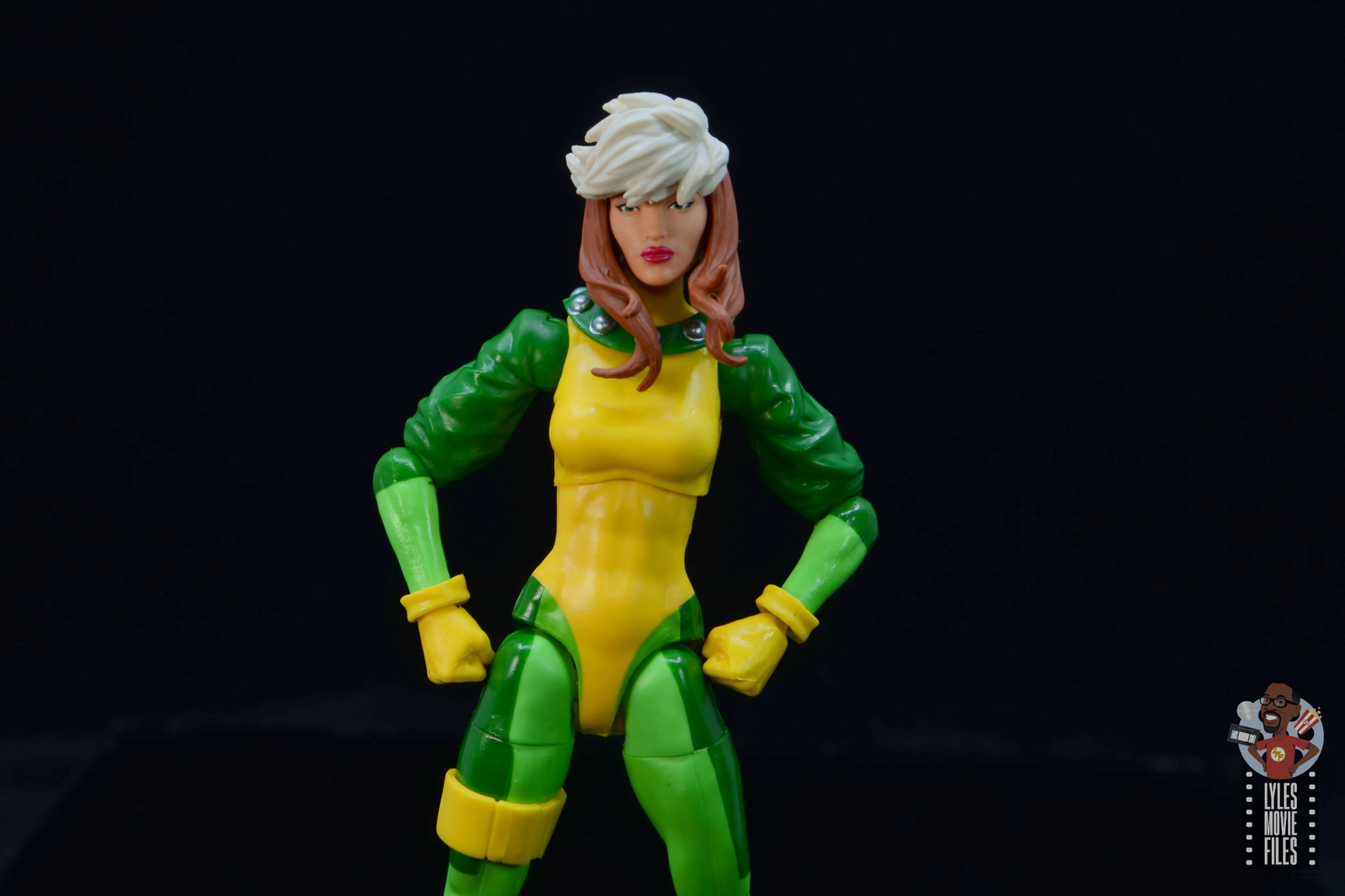 Articulation: Rogue is still a powerhouse with this version of the X-Men so she needs full range of motion. Naturally there’s no bicep cut, which would have helped, and no double-jointed elbow. 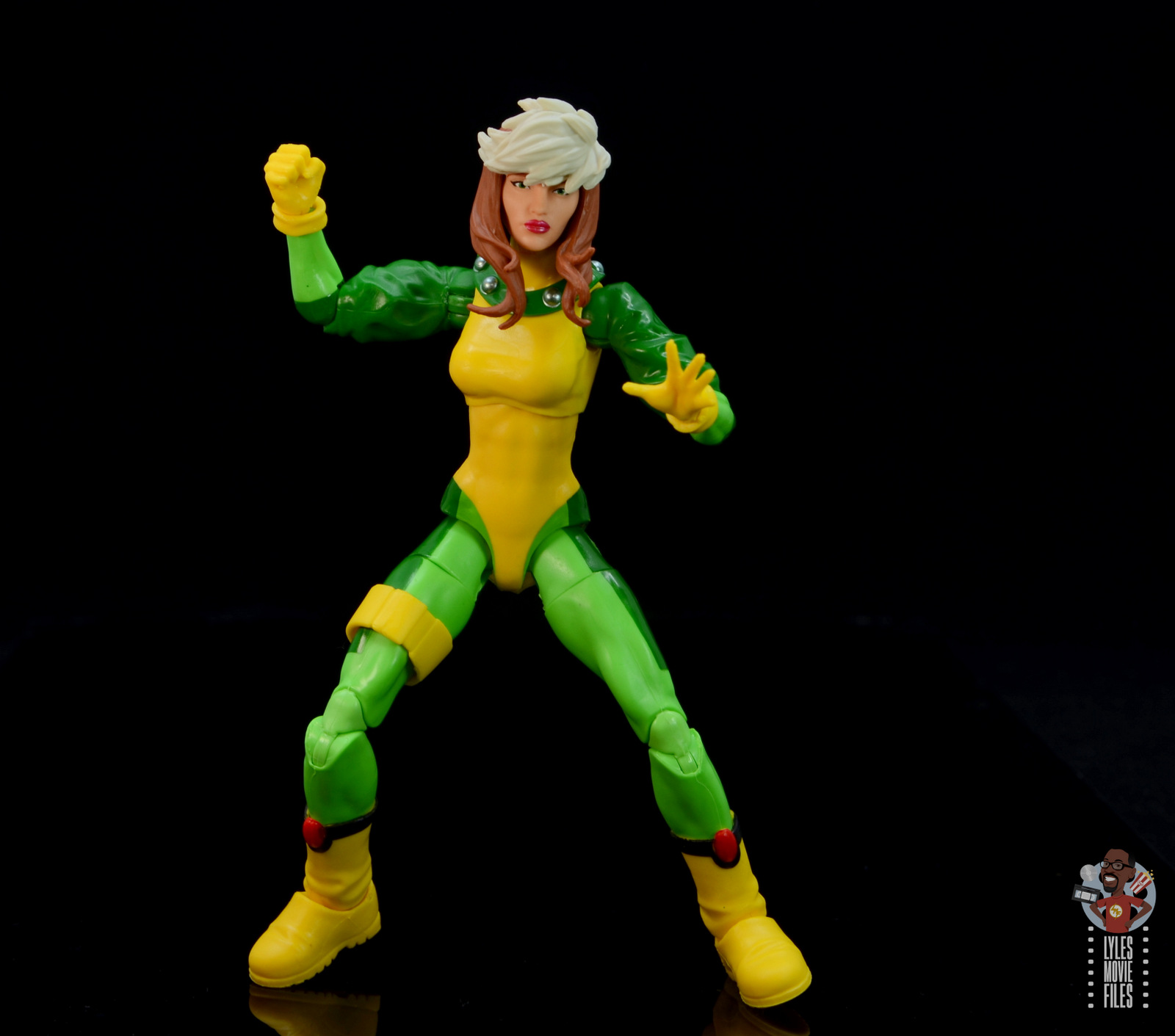 Fighters like Rogue would benefit from this articulation piece as the default. Thankfully that’s going to be the norm starting with Shriek. 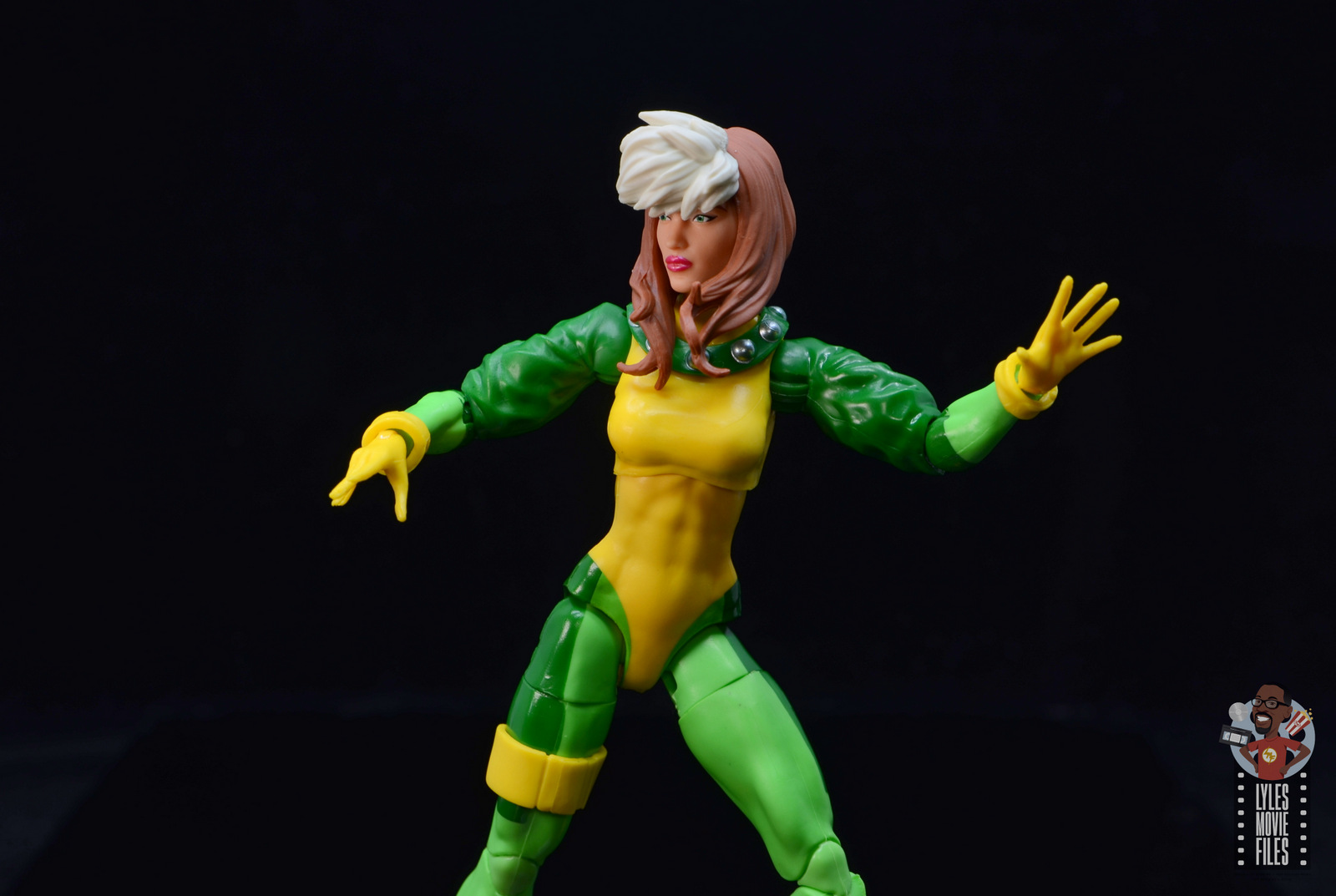 Still, you can get Rogue into some nice action poses even if it’s not as dynamic as I’d like. 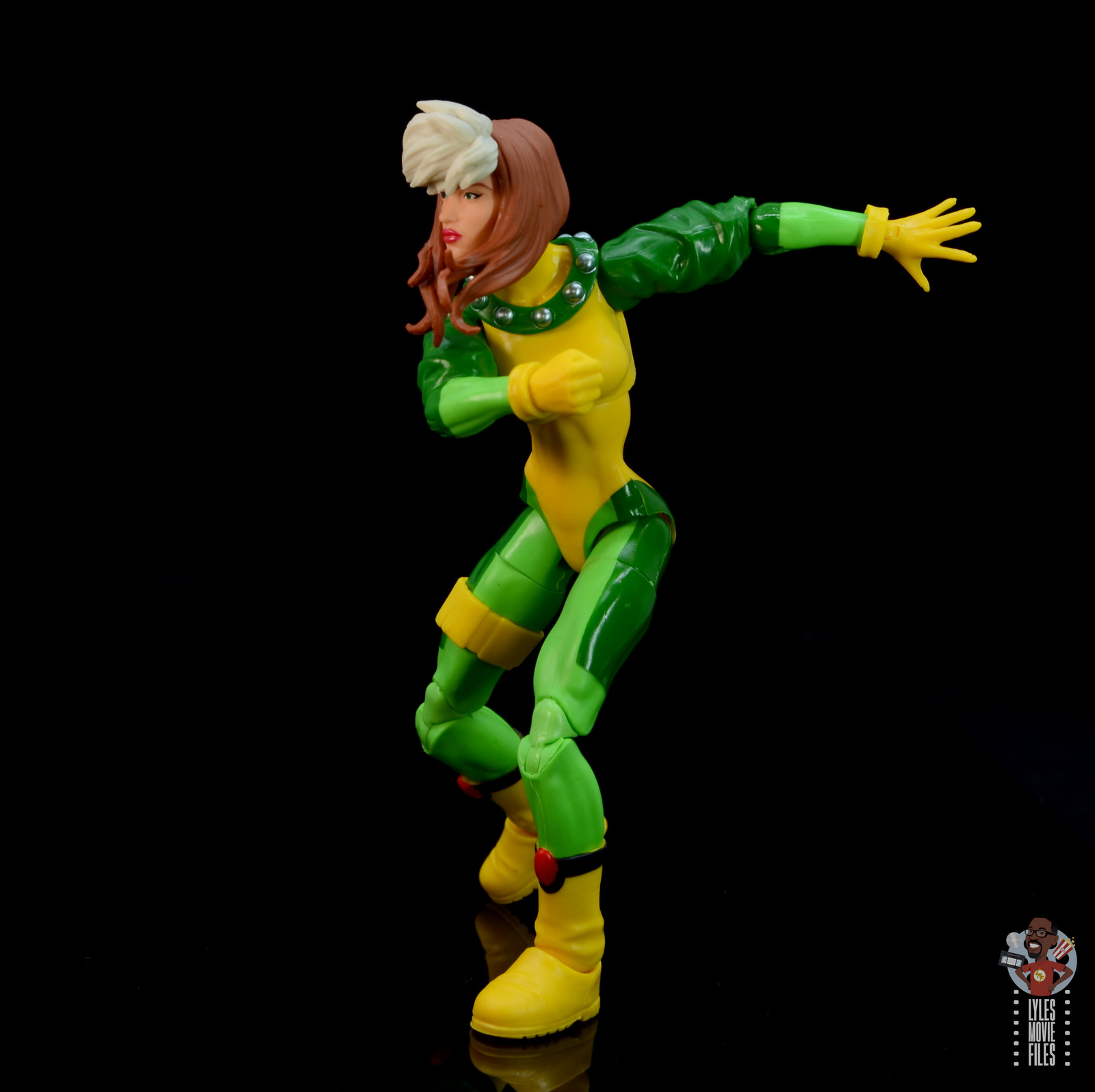 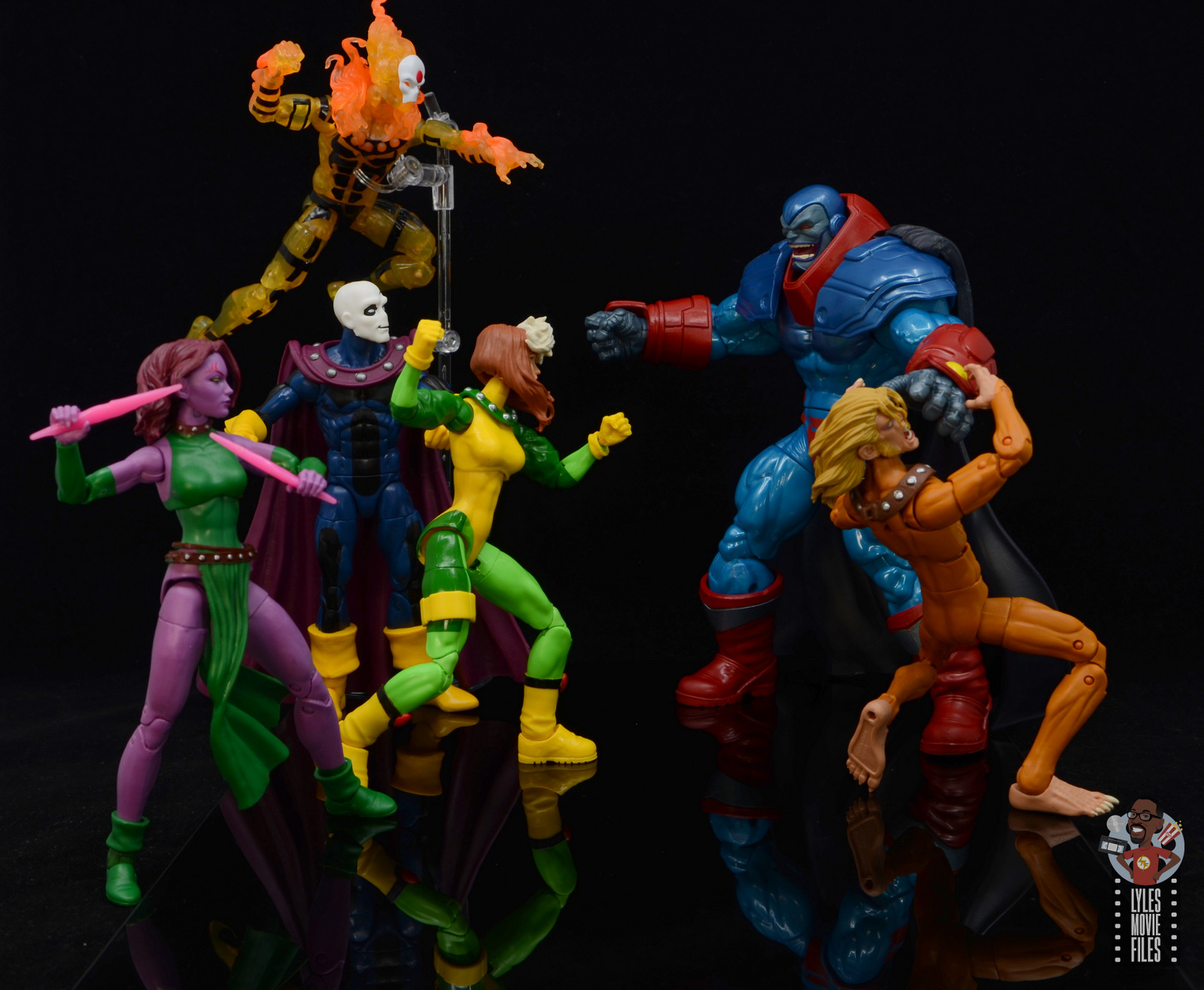 Accessories: Rogue doesn’t come with a ton of accessories. She’s got an alternate set of fists. That’s useful for Rogue. This could have been a nice time to include a baby Charles since he’s so key to the Magneto/Rogue dynamic. 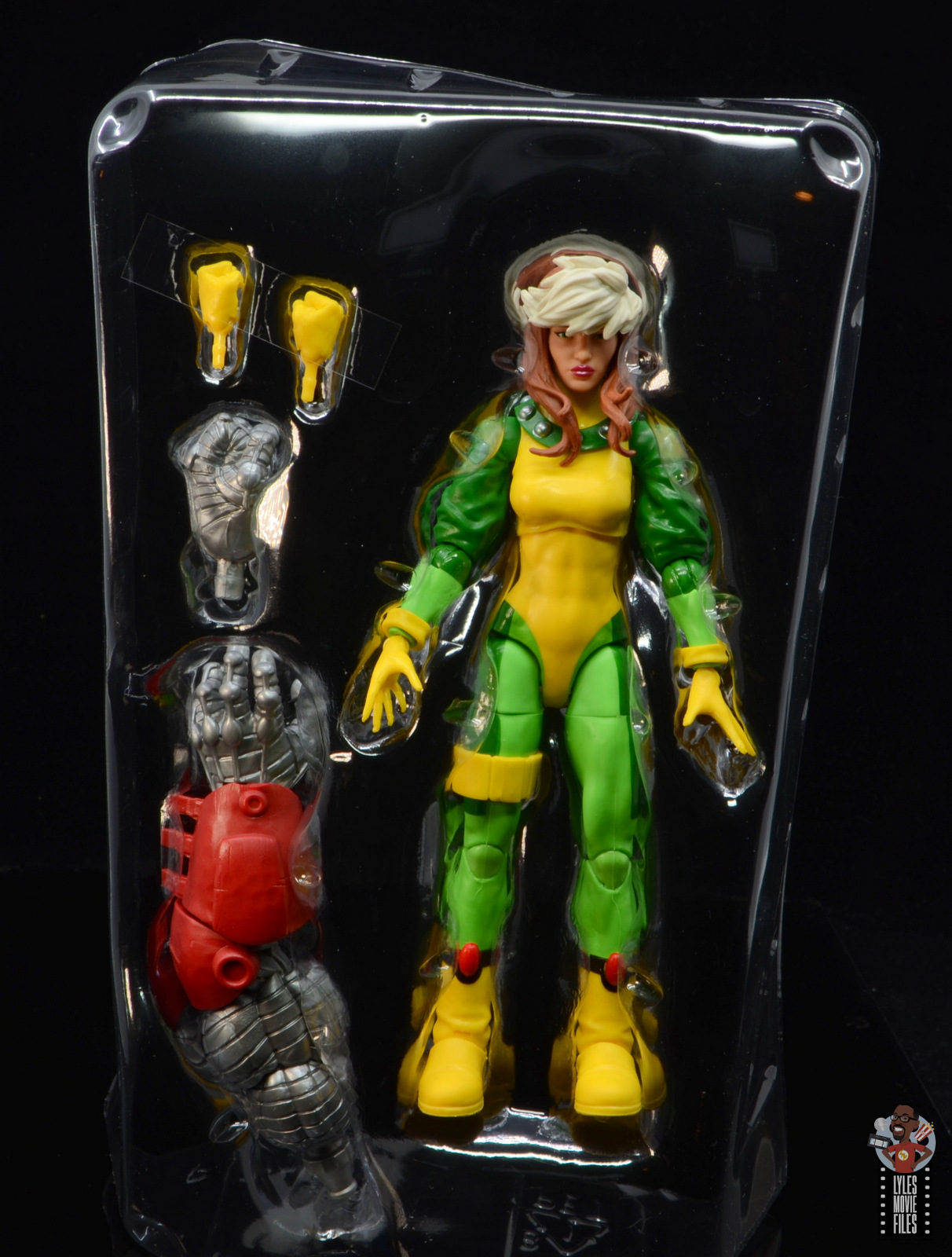 Rogue does get the Build-A-Figure left arm for Colossus along with a swappable fist. That’s a nice touch to include swappable hands for BAFs.

Worth it? Like Magneto, you can grab Rogue now for the $18.99 price point. That’s a solid deal.

Rogue is a great addition to the AOA roster. The only hindrance for her is the lack of double-jointed elbows and bicep articulation. 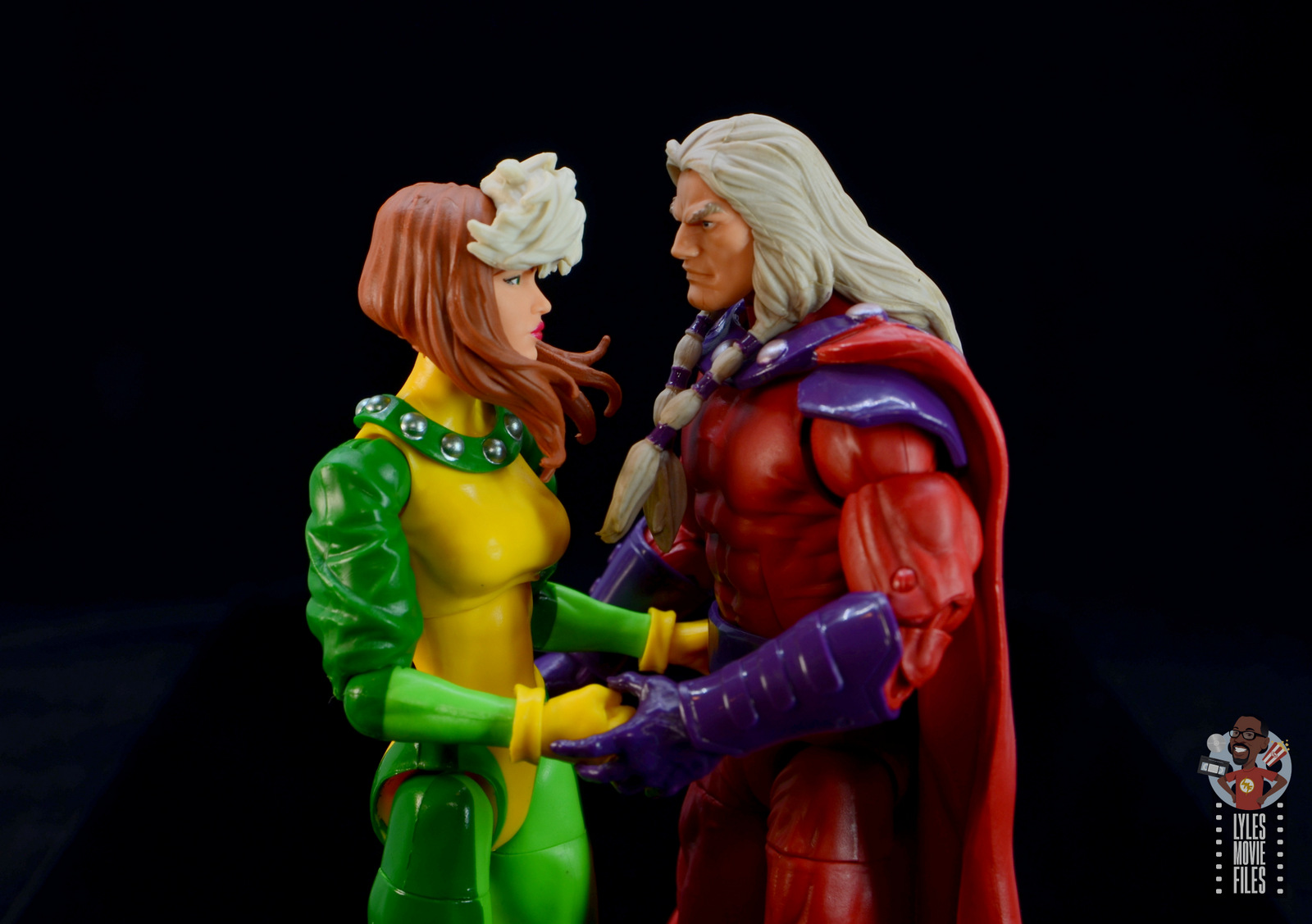 Where to get it?  You can get Rogue from Target, Amazon or Entertainment Earth. The wave is slowly tricking into stores as well.

As an Amazon and Target/Entertainment Earth affiliate, I earn from qualifying purchases.