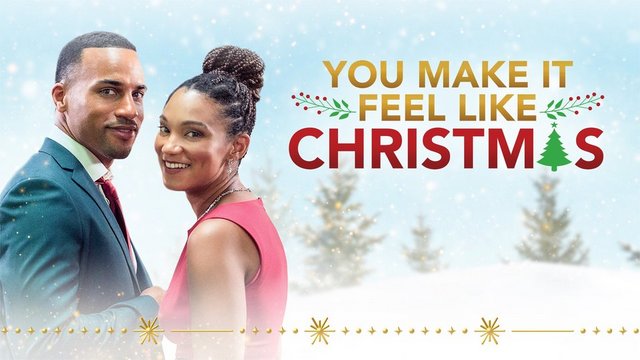 A Christmas Mission gets reassigned as You Make it Feel Like Christmas for its 2021 Lifetime holiday deployment. Regardless of the title, it’s a pleasant enough movie to bake cookies, address cards and wraps gifts this season.

Emma (Mary Antonini) is prepping for a big event for her hand craft shop. Design influencer Kate Marguiles (Stephanie Sy, Welcome to Sudden Death) is going to promote a Christmas Eve event at the shop.

There’s another reason Emma is fine with the Christmas Eve date as it provides her an excuse to duck out of Christmas with her father, Tom (Alex Poch-Goldin) a retired army vet affectionately referred to as The General. After Emma’s mother died, the already shaky relationship between Emma and The General has become rougher. 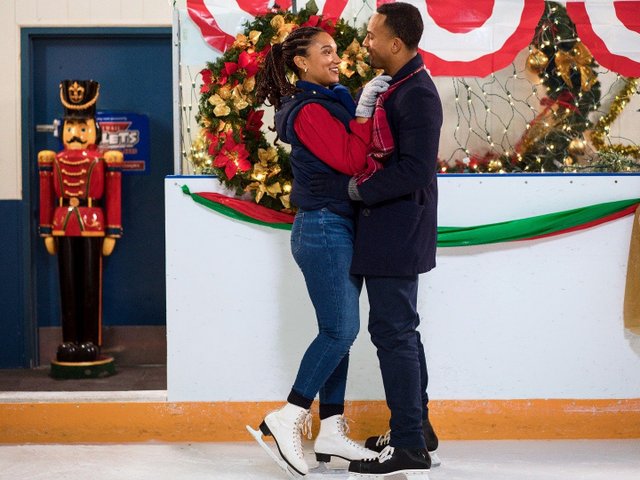 This is more of a say don’t show subplot as The General seems desperately eager to strengthen their relationship. Working on his autobiography has helped flue in The General that he doesn’t know his daughter as well as he’d like.

Help is on the way with the return of Aaron (Michael Xavier, Shazam!), Emma’s childhood best friend/love of her life, who left her to join the military. Eager to provide some Christmas spirit to The General and reconnect with Emma, Aaron offers to visit her and bring her back home in time for Christmas breakfast.

That’s a unique Christmas movie plot although it’s not set up very well to make Emma come off especially well. Sure, the art showcase is a big deal for her shop, but was it really more important than being there for her father on their first Christmas without her mother?

Emma’s justification for being mad at Aaron also feels a little thin too. And it feels even worse when the reason he vanished for over a decade is revealed. Thankfully, Antonini is able to overcome the occasionally shaky script to keep the audience invested in Emma reestablishing her love affair with Aaron and reconnecting with The General.

Sy somewhat steals the film as the hyper chatty and enthusiastic influencer. In a bit of a surprise from the cliché take on this kind of character, Kate might be a little self-centered, but she’s not a nasty person even going so far as to tell her hardworking assistant please and thank you.

The movie offers a lesbian subplot with Emma’s business partner, Liz (Nadine Pinette) and Aaron’s cousin, Sarah (Solange Sookram) that feels more like checking a box to be more inclusive than one of any substance.

Developing a secondary romance feels like too much work for the writers especially when they’ve already got the Emma/The General subplot. Besides a few lingering glances, the Liz/Charlie romance comes off more platonic than another burgeoning relationship. There’s no significant physical contact beyond a hand on a shoulder either.

Director Lisa France navigates the smaller scale budget well with smart use of limited sets that avoid feeling too claustrophobic. France keeps the scenes within a realistic backdrop

As usual with the genre, the film lives or die with the chemistry between the two leads. Antonini and Xavier are a cute pairing with a natural chemistry that sells the idea that they’ve been friends before lovers. Xavier offers big leading man vibes. Antonini shows she could easily be a foundation of Lifetime/Hallmark romance movies for the next few years with her likeable presence and ease at conveying all the requisite emotions.

You Make it Feel Like Christmas might not be the standout Lifetime/Hallmark cinematic gift this season, but it’s charming enough to get viewers hyped and eagerly beginning the countdown for Christmas.

Check out this collection of Lifetime Christmas movies including No Time to Christmas on Amazon.