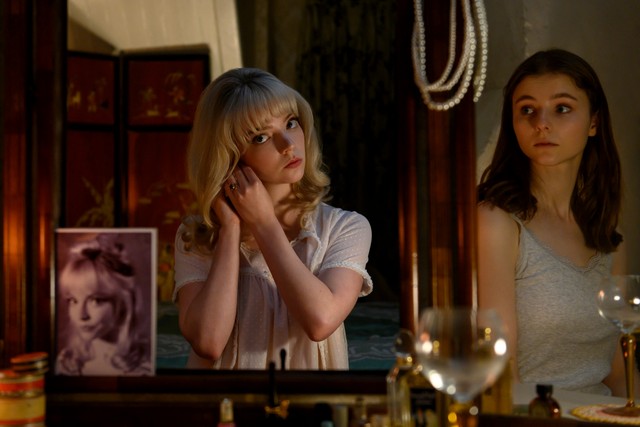 Last Night in Soho is a psychedelic thriller with entrancing cinematography, captivating performances and a sensible twist that encourages at least a second viewing.

A messy final act holds it back from being one of 2021’s elite films, but it’s definitely one worth watching.

Elle (Thomasin McKenzie, Old) is set to attend fashion school in London. It’s a big departure from her quaint life living with her grandmother (Rita Tushingham) in the wake of her mother’s death, but Elle is ready to make her mark as a fashion designer.

Early on Director/co-writer Edgar Wright (Baby Driver) establishes that not everything is normal as Elle sees a vision of her mother (Aimee Cassettari) in the mirror. This isn’t uncommon for Elle yet the visions tend to foreshadow some good news. Like most aspects of the film, this isn’t a throwaway moment as it helps to explain Elle has degree of psychic abilities. 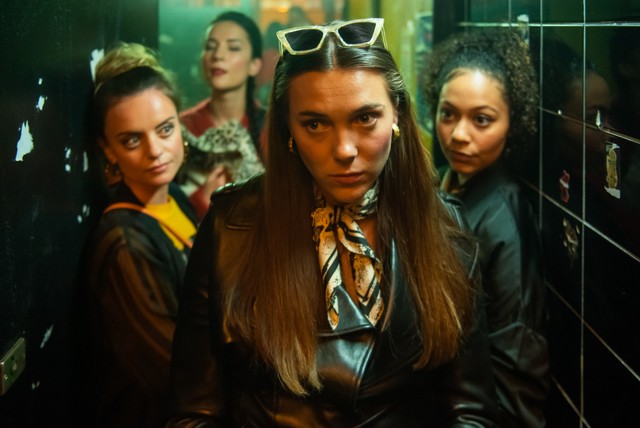 Ms. Collins doesn’t have a ton of rules save no boys after 8 p.m. making for an ideal living situation for the demure Elle. She does catch the eye of fellow student John (Michael Ajao, Attack the Block), who’s just as unassuming and equally bashful.

After a long day, Elle drifts off and magically finds herself transported to London in the 60s. It’s everything Elle imagined when she daydreamed and envisioned herself in those flowing dresses and high hair, dancing to the hits of the era and getting enraptured by the lights and dashing gentlemen.

At first, Elle experiences this in her pajamas only to suddenly see a different face in the mirror. It’s not Elle at all, but Sandie (Anya Taylor-Joy, The New Mutants), an aspiring singer ready to become famous. With a playful, almost fairy tale nod and tap to the mirror, Sandie and Elle are reversed. Now it’s Elle in the mirror world while still getting to experience this throwback world as Sandie.

Wright pulls off the mirror gimmick and alternating between Sandie and Elle so smoothly it’s easy to get caught up in the spectacle and imagine what it would be like to experience any time period of your choice.  As Sandie, Elle takes part in the kind of life she’d never experience. 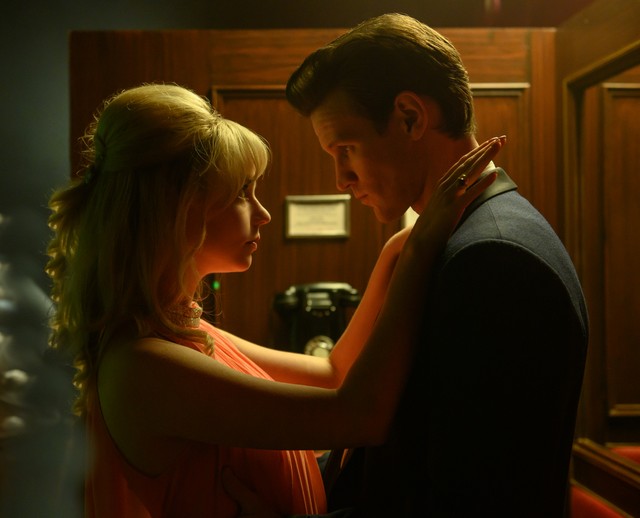 Sandie’s got the looks to make men become blubbering idiots, the attitude to dismiss squares not worth her time, the moves to dazzle onlookers and a silky voice that screams superstar.

Those dreams might become a reality sooner than Sandie thinks when she encounters the smooth and charming Jack (Matt Smith, Terminator Genisys). Jack promises the world — a promise he couldn’t make nor has any intention of trying to after sleeping with Sandie.

Like Sandie, Elle’s innocent nature doesn’t let her see through this charming façade and she can’t wait to return to this magical world the next night when it’s time for bed. It’s easy for Elle to get swept up vicariously living through this whirlwind romance and opportunity for stardom.

Sandie proves to be Elle’s muse as she starts whipping up retro attire in class hailed by her instructor. Soon, Elle is changing her hair color and dressing more like her inspiration eagerly awaiting the next dream. 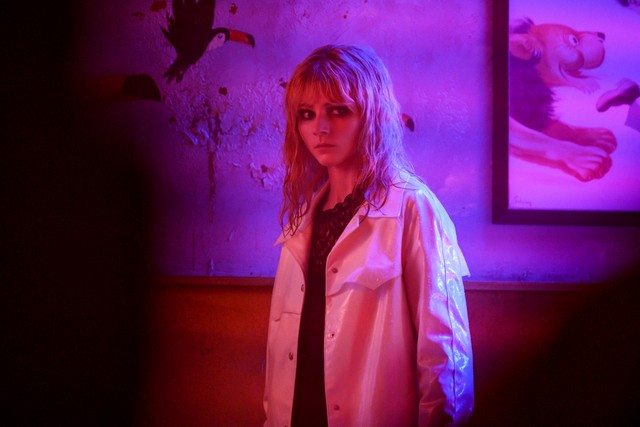 This time, the charming illusion fades and Elle realizes that Jack is little more than a sophisticated pimp with increasingly alarming anger issues. As Elle learns more of Jack’s nature, she starts to become more concerned about the men Sandie is encountering. Some of clearly lecherous while one (Sam Claflin, Love, Wedding, Repeat) seems more mysterious.

Co-screenwriter Krysty Wilson-Cairns (1917) and Wright whip up a clever script, one that takes this idyllic time period — a sanctuary for Elle — and gradually reveal the ugly, festering warts. Just as the time Elle wants to escape from, the 60s weren’t this pristine, golden era and her empathetic psychic abilities put her in a very dangerous position.

Beyond the increasingly frequent nightmarish visions from the 60s even when she’s awake, Elle might have threats in the present day as well. She’s not sure what to make of the regular (Terence Stamp, Smallville) at her bar that seems to know way too much about her.

McKenzie is fantastic in the lead role. She gives Elle a sheltered, childlike innocence that keeps getting torn down forcing her to pursue her own interests and committing to her decisions. Through Sandie she becomes emboldened to take risks and chances she would have never dreamed before.

Taylor-Joy doesn’t so much steal the show so much as she is the show. She makes Sandie vivacious and mesmerizing, but behind all the glam there’s more to her and Taylor-Joy creates those unspoken layers wonderfully with throwaway glances and subtle shifts in posture. While hardly an unknown, this is the kind of performance that will definitely raise her profile. 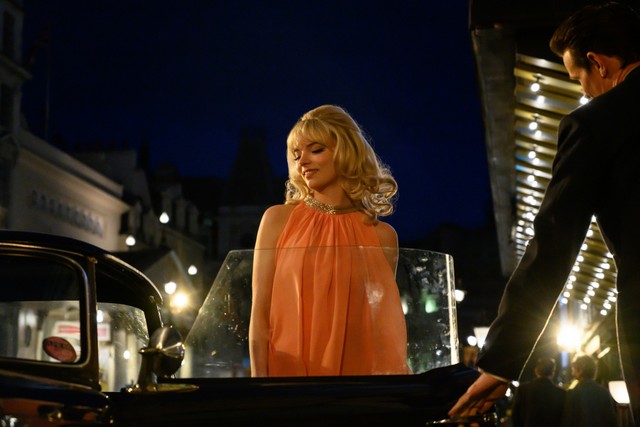 Stamp is never bad in anything and Riig’s final performance is a memorable one. Smith gets to convincingly show off a more sinister side while Ajao makes for a charming romantic interest.

Color and lighting are integral to the film and cinematographer Chung-hoon Chung (Oldboy) creates a beautiful contrast of the seductive bright lights of the 60s clubs against the neon lights of the sign illuminating Elle’s room. The film looks stunning on all fronts.

With any Wright production the music is a major component and Last Night in Soho doesn’t disappoint in that regard. The score from Steven Price is catchy and captures the tone of the 60s while growing ever more sinister as Elle’s nightmares worsen. 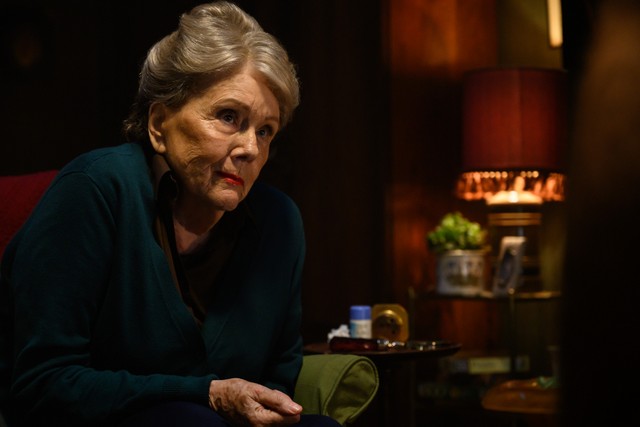 A big issue for the film is by the third act, most of the focus is on the mystery and cracking the case. As more information becomes available, the twist starts to feel less shocking. Is that a downfall of a logical twist? It’s less shocking because it’s laid out in a way that makes sense and doesn’t come out of nowhere. And should that be considered a bad thing?

The biggest problem though is the warped sense of morality to justify the twist. There’s a point where it all works and then the script takes a turn that ultimately doesn’t work. It still feels too early to dissect the film in a spoiler-heavy manner as it ruins the entire first viewing experience knowing what to expect, but one change fixes the messy final act. 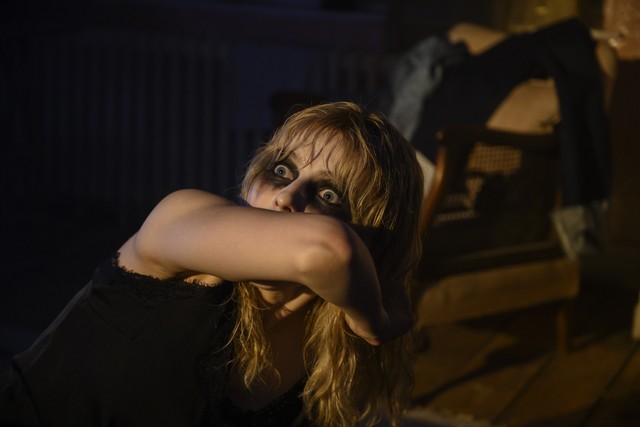 It’s a darker twist, but in the wake of the Me Too movement, it would address the film’s most troubling narrative and in turn made for a stronger film. As is, Last Night in Soho is probably going to end up being my favorite film with a flaw of 2021.