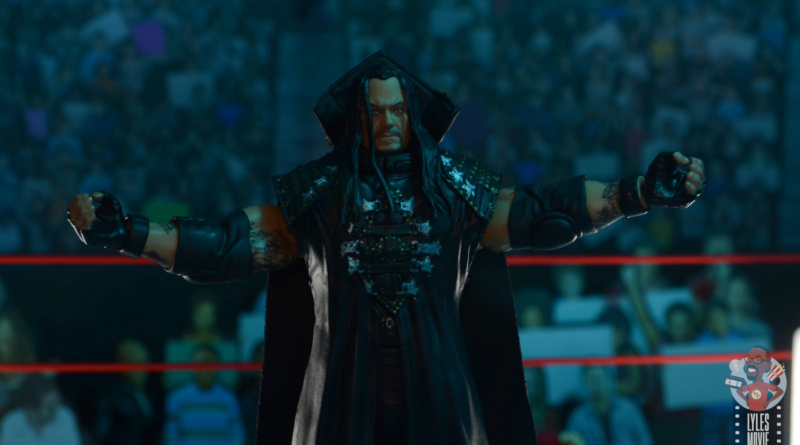 I liked The Undertaker well enough through the early 90s. His feuds with Diesel, Sycho Sid, Yokozuna and Mabel were fun, but it wasn’t until 1997 when I really got engaged in him as a character. Undertaker evolved into the Attitude Era better than most of his New Generation counterparts and his feuds with Mankind, Stone Cold Steve Austin and Kane helped establish him as the WWF’s measuring stick.

Mattel has cranked out a ton of Undertaker figures, but for some reason his signature Attitude Era look hadn’t gotten the figure treatment. Much like the 2000 era Triple H, we finally got Attitude Era Taker in the premium Ultimate Edition line. I didn’t really care how I got him and the UE format is my preferred release method for Legends now at this point anyway.

After all this wait let’s see if this version of Taker was worth the wait or needs to buried.

Package: Wave 11 features the standard Ultimate Edition red and white color scheme.  This shows off Taker much better than Kane. The side portrait features Undertaker from this time period with the thicker, longer hair. 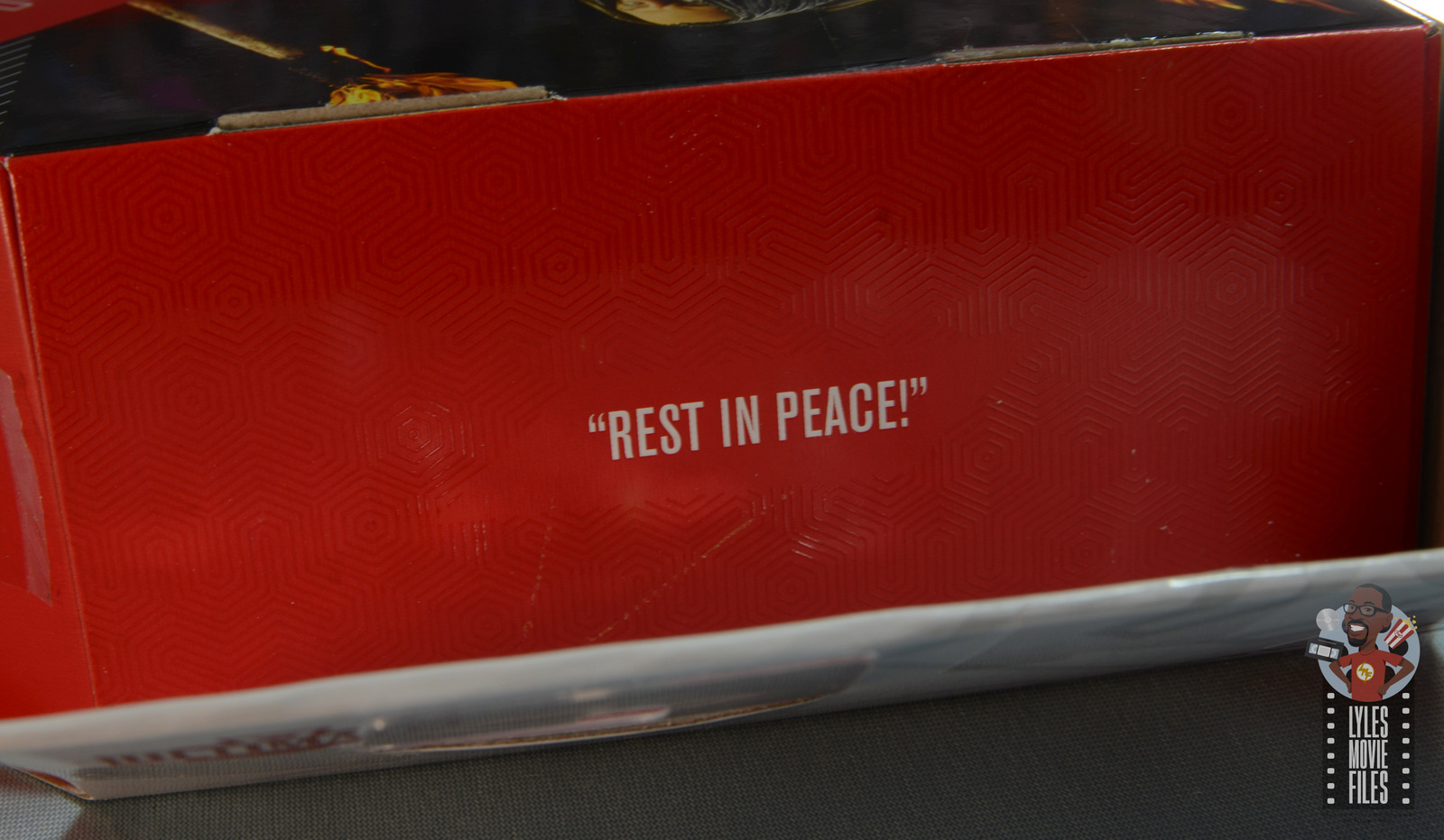 On the back, we get a nice picture of the Taker figure fully geared up en route to the ring and then a shot from his Wrestlemania 14 match against Kane. That’s a nice one-two pairing. The stats break down the key elements. 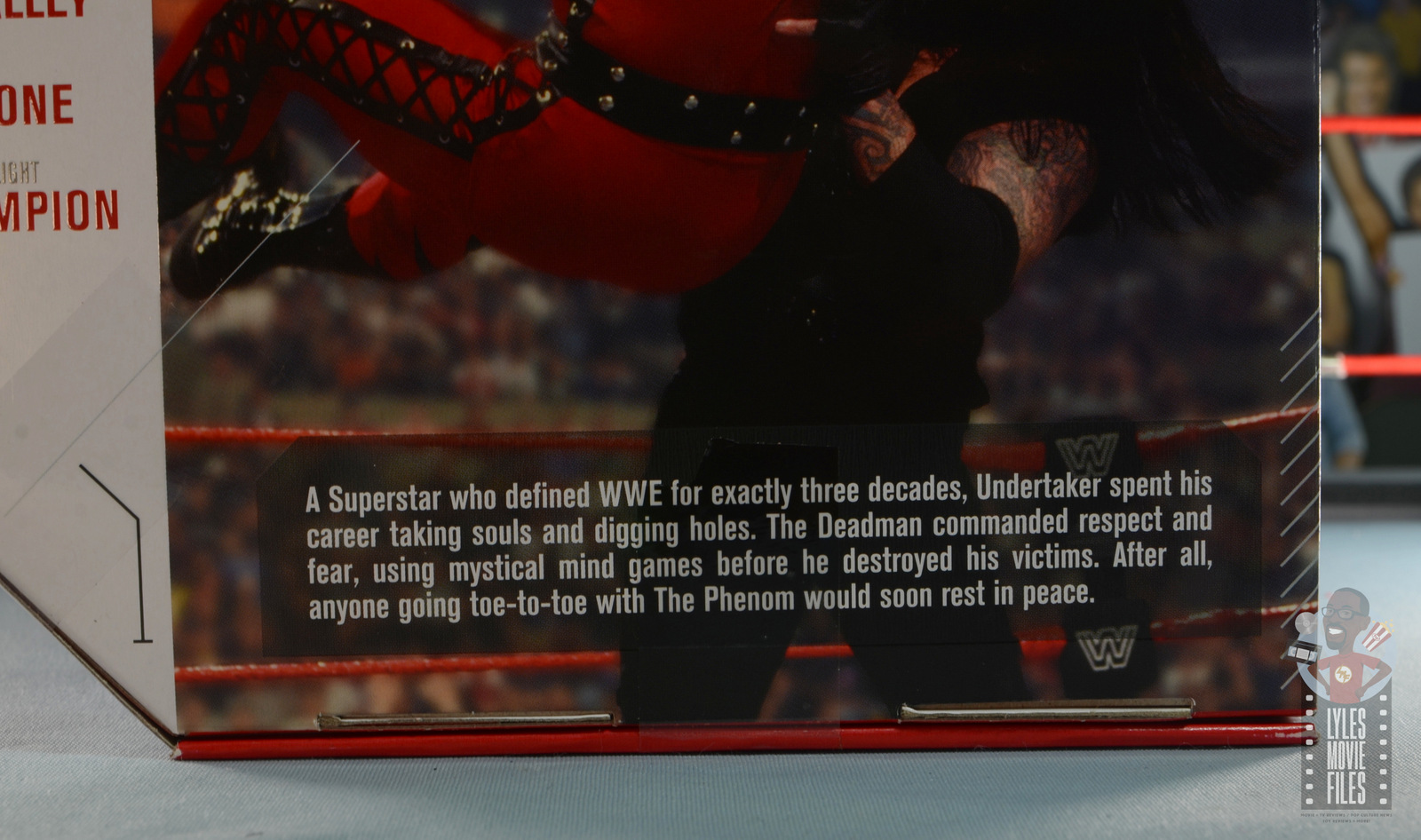 I don’t love the bio as much as normal as it’s written more as a comprehensive account of his career instead of this specific time period. 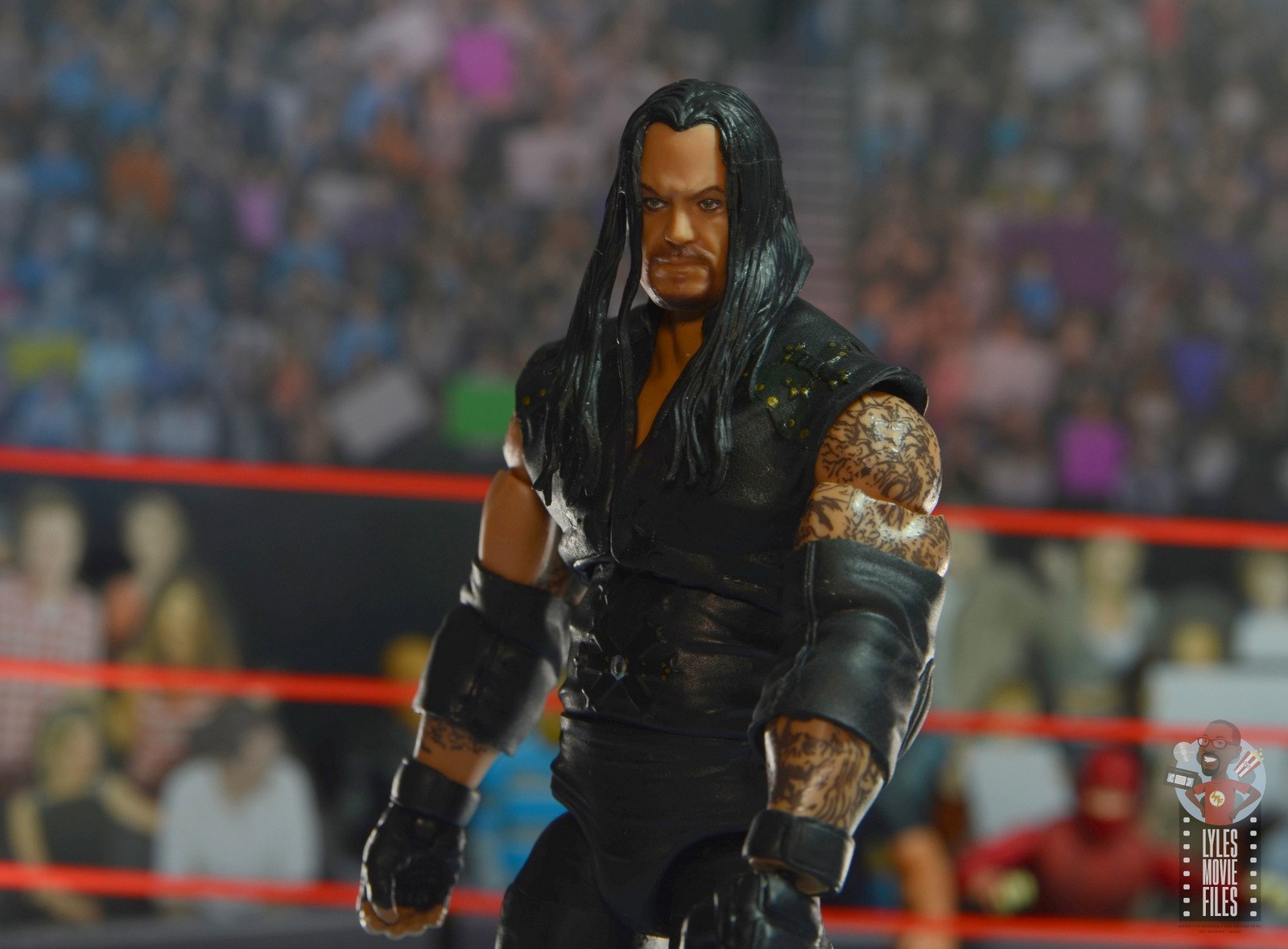 Likeness: As he moved into the Attitude Era, Taker’s attire got more complex. It wasn’t just a black shirt with cut off sleeves. Now he rocked a more intricate attire with detailed buckles and studs framing larger symbols. 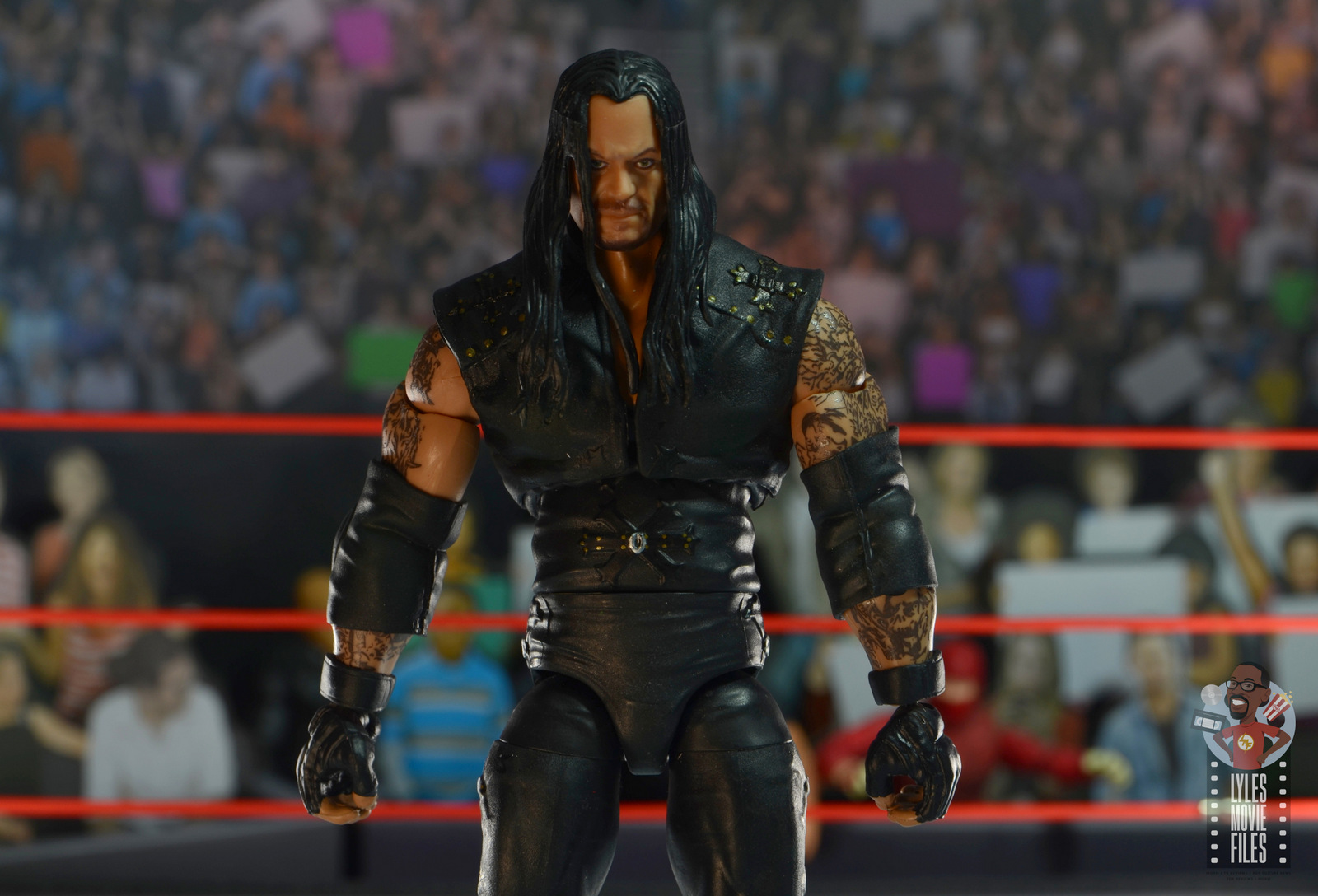 The default head sculpt is very well done with the long hair flowing down on either side of his face. The only weird thing is Mattel has the hair cupped above the back of his neck instead of just flowing down. It’s a questionable design choice that felt like a created mistake instead of an unavoidable one. 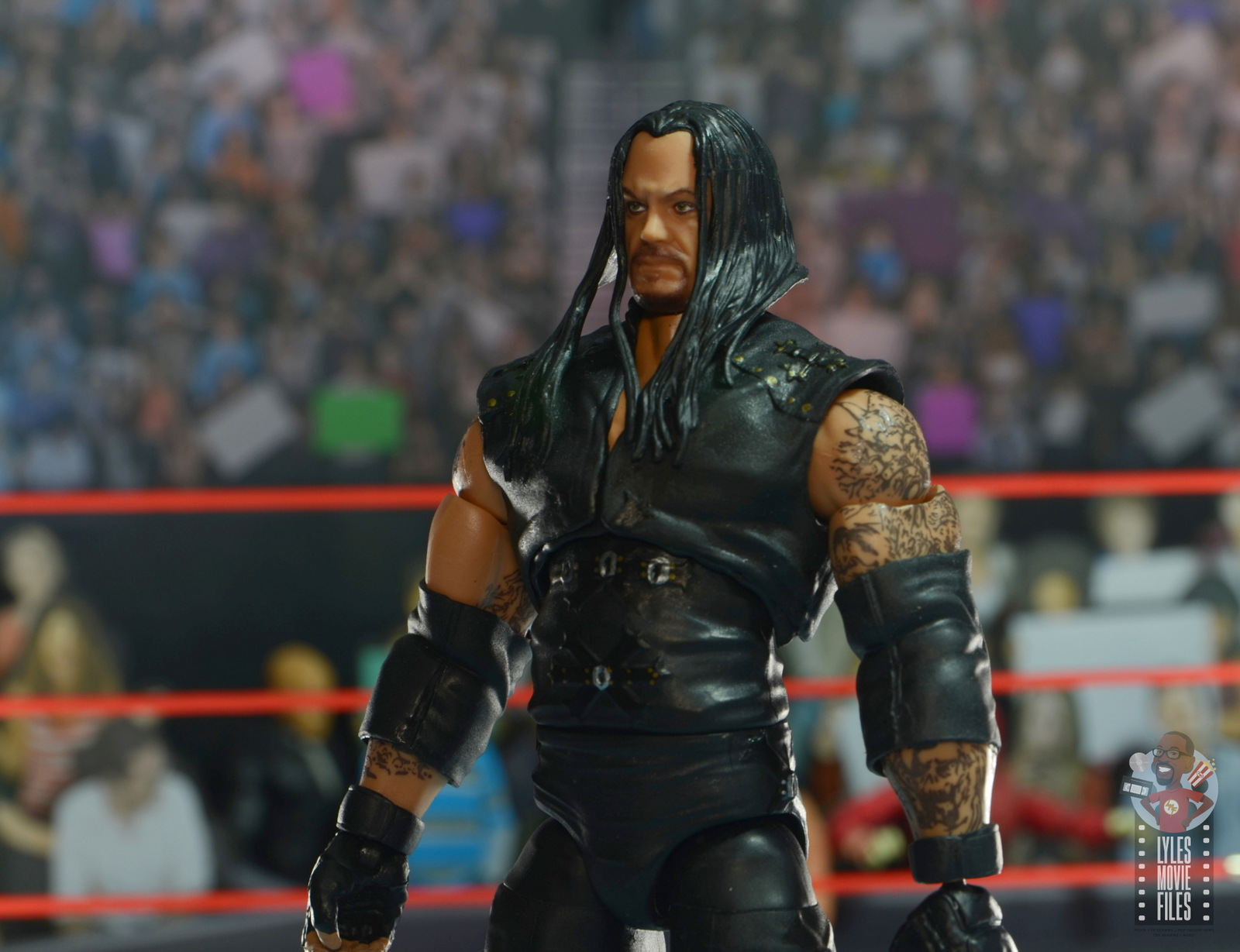 Unlike most Undertaker figures, this one has some heft and width to him. The Ultimate Edition torso still has that slimmer lower portion although it’s not as noticeable as it is with figures without shirts. 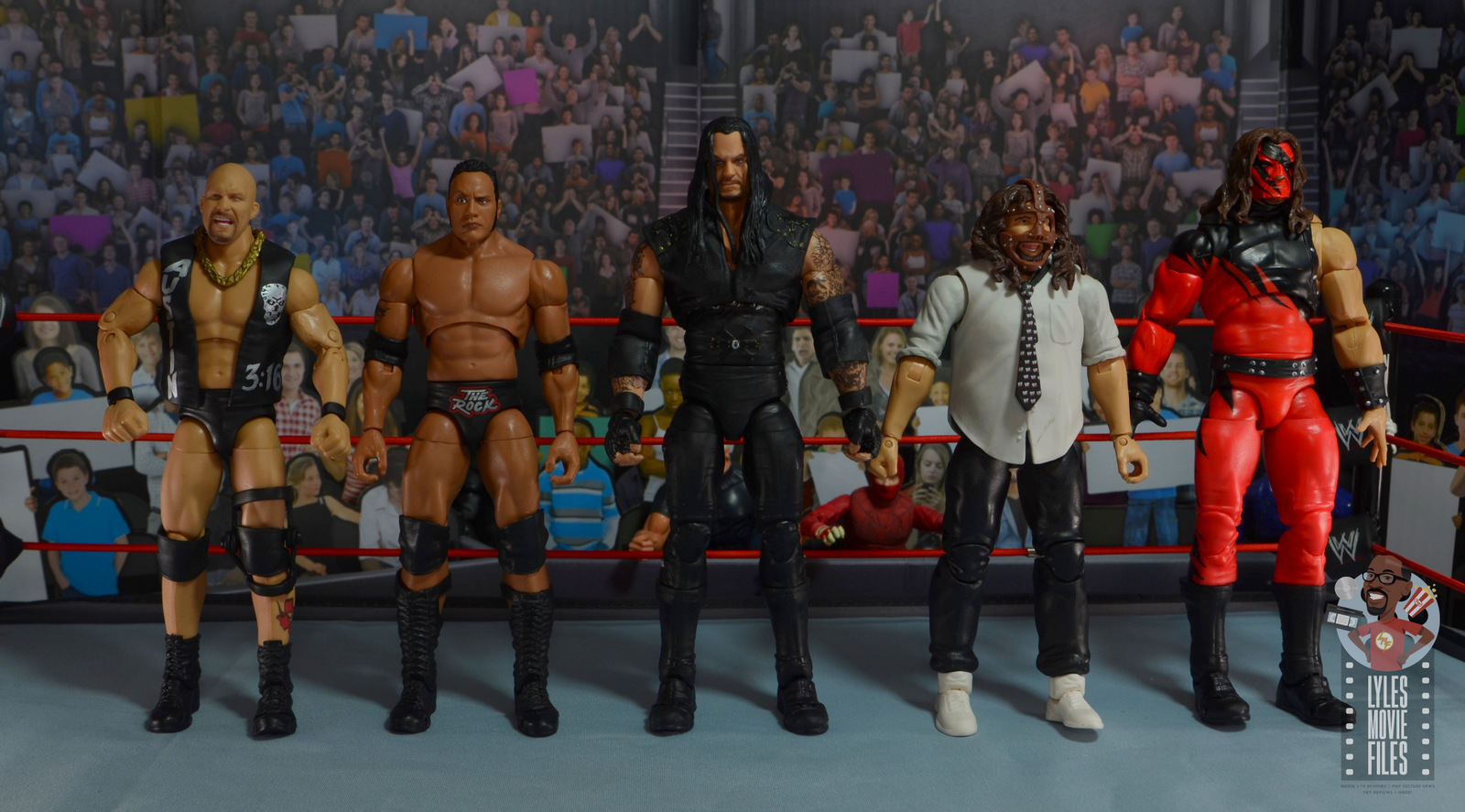 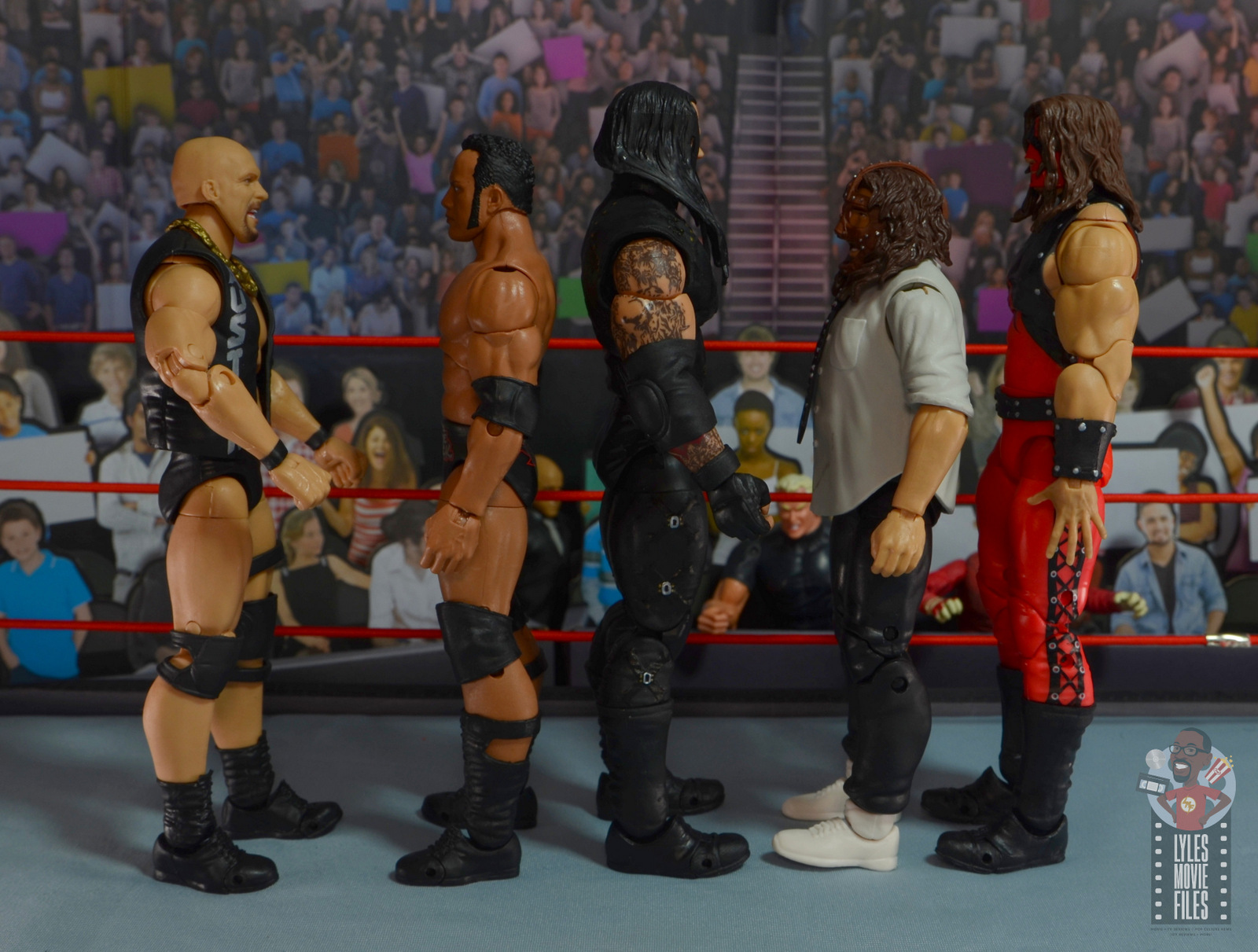 Paint: Undertaker is pretty simple paint wise. The details of his studs and buckles are fine. His goatee could be more pronounced, but it’s not too glaring an issue.

Articulation: Undertaker began expanding his repertoire at this stage and started doing planchas in addition to his flying clotheslines and rope walks. 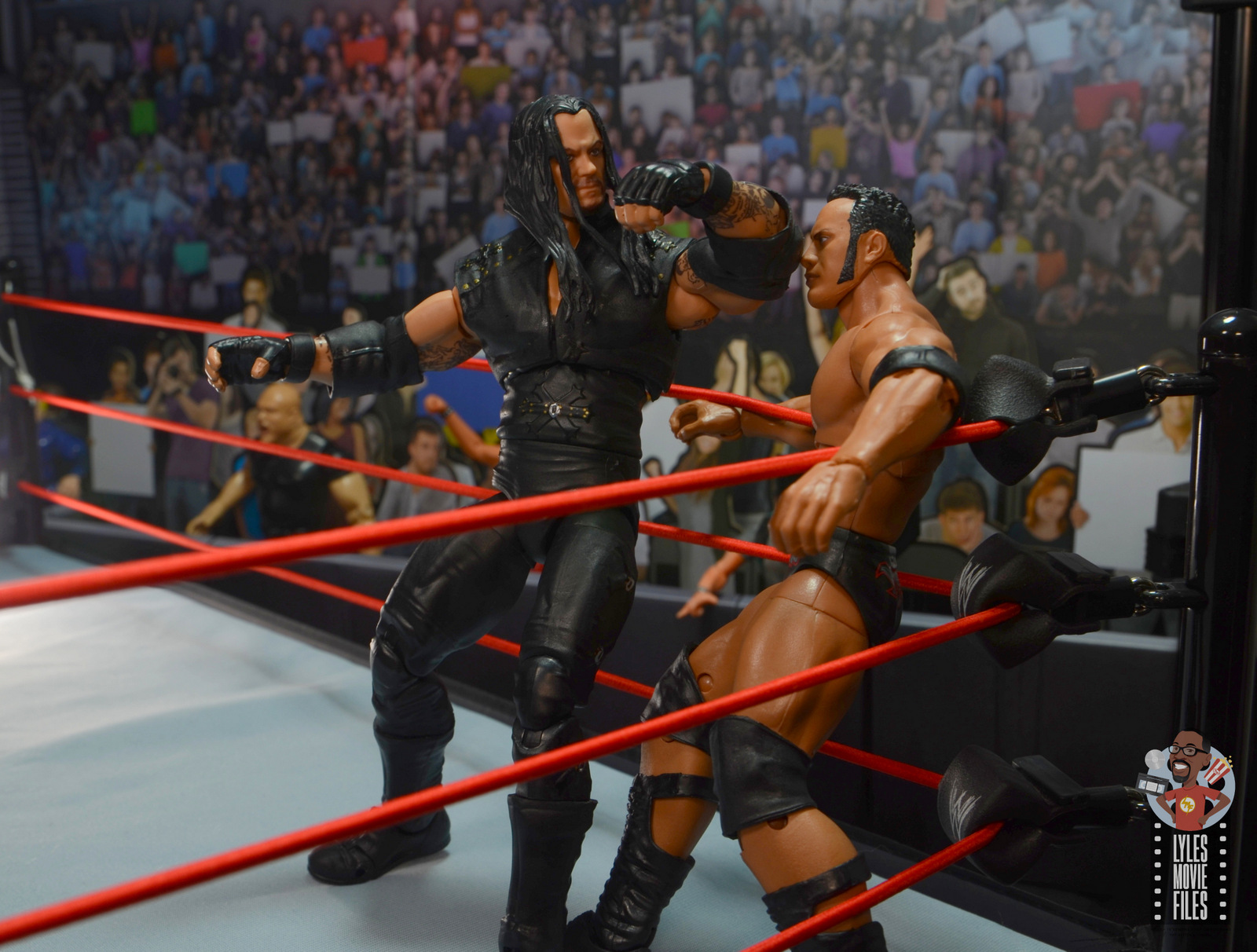 With the Ultimate Edition articulation there’s no big problem in nailing his signature moves including the Chokeslam and Tombstone Piledriver. 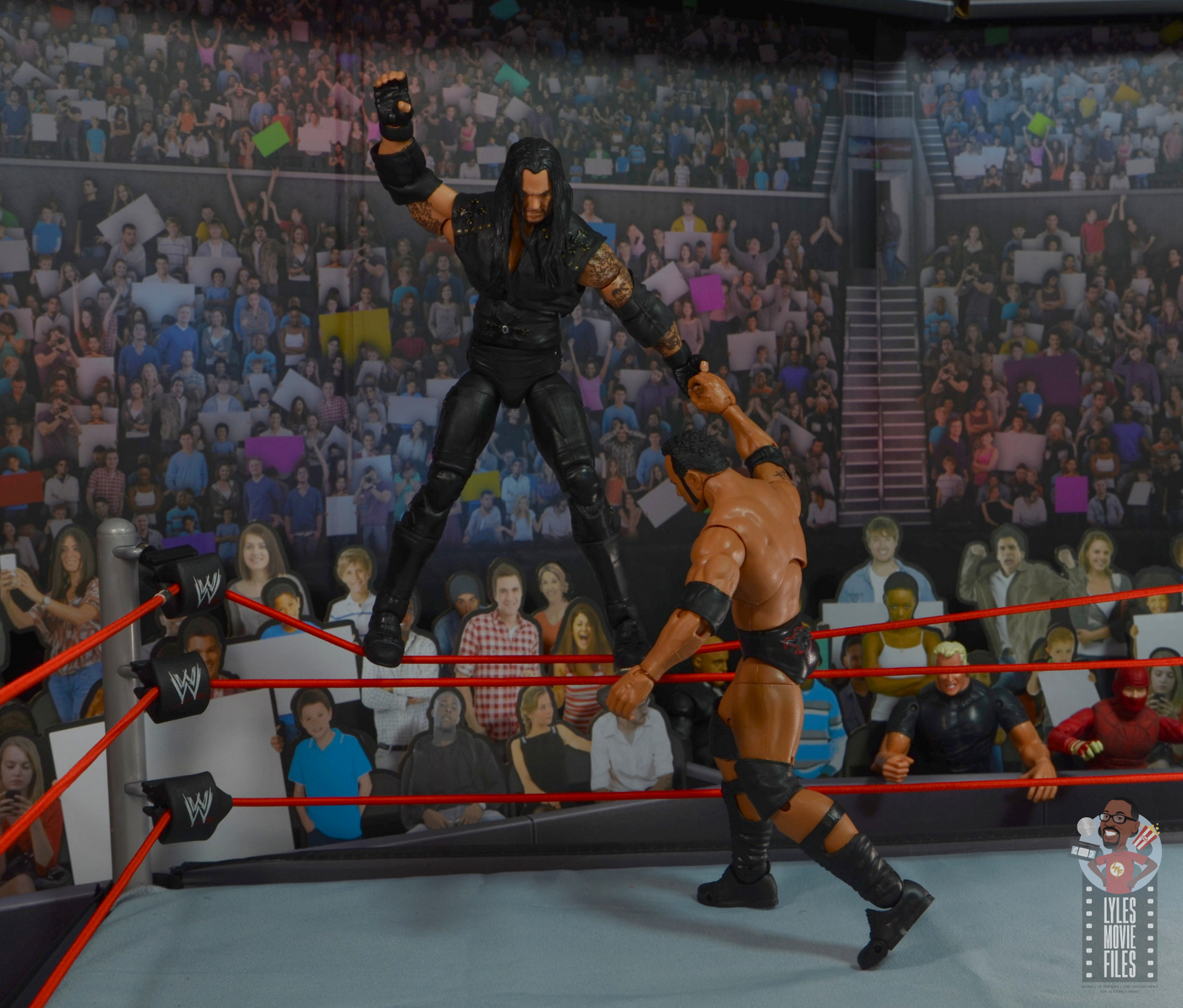 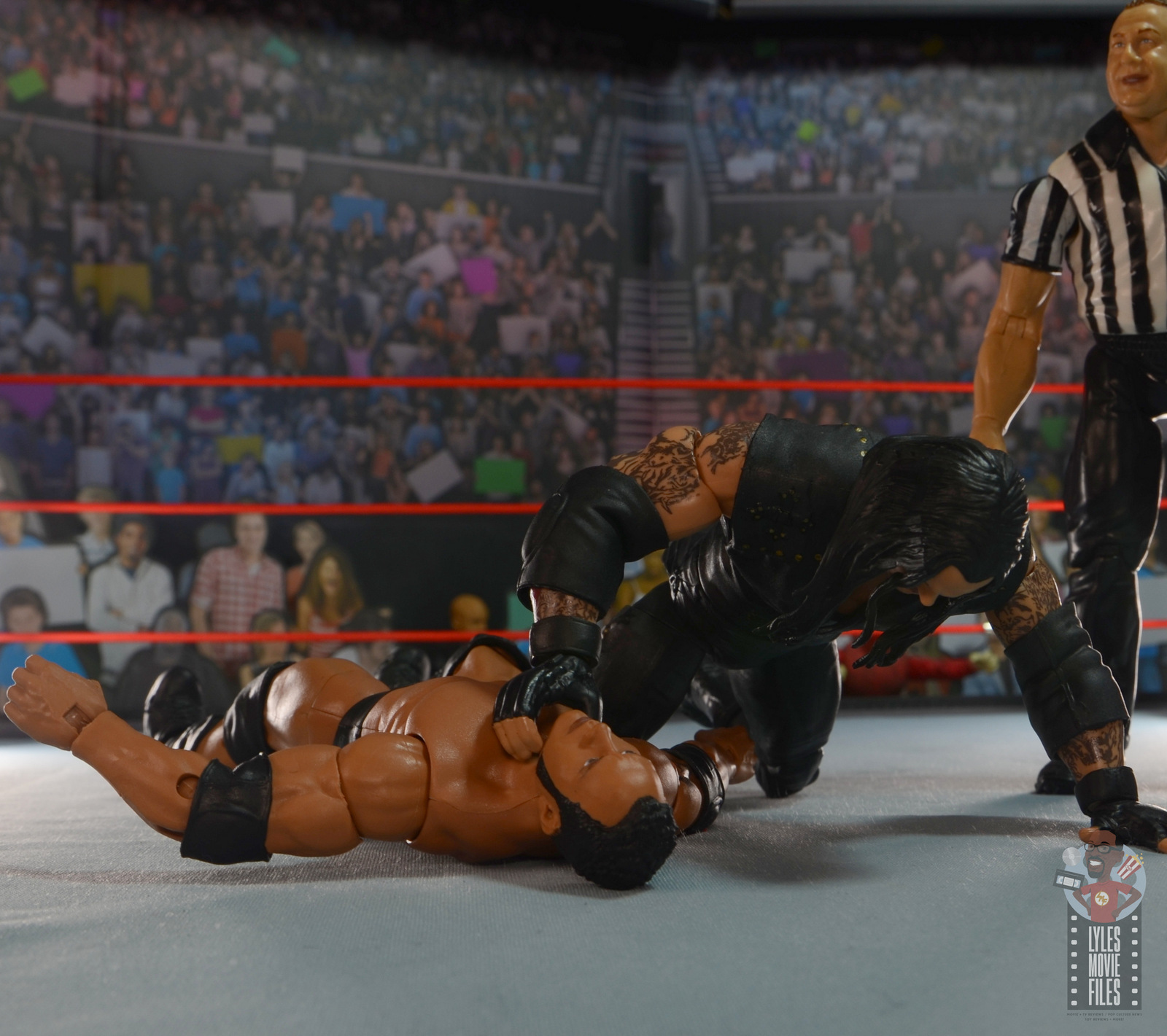 Ultimate Edition The Undertaker has: 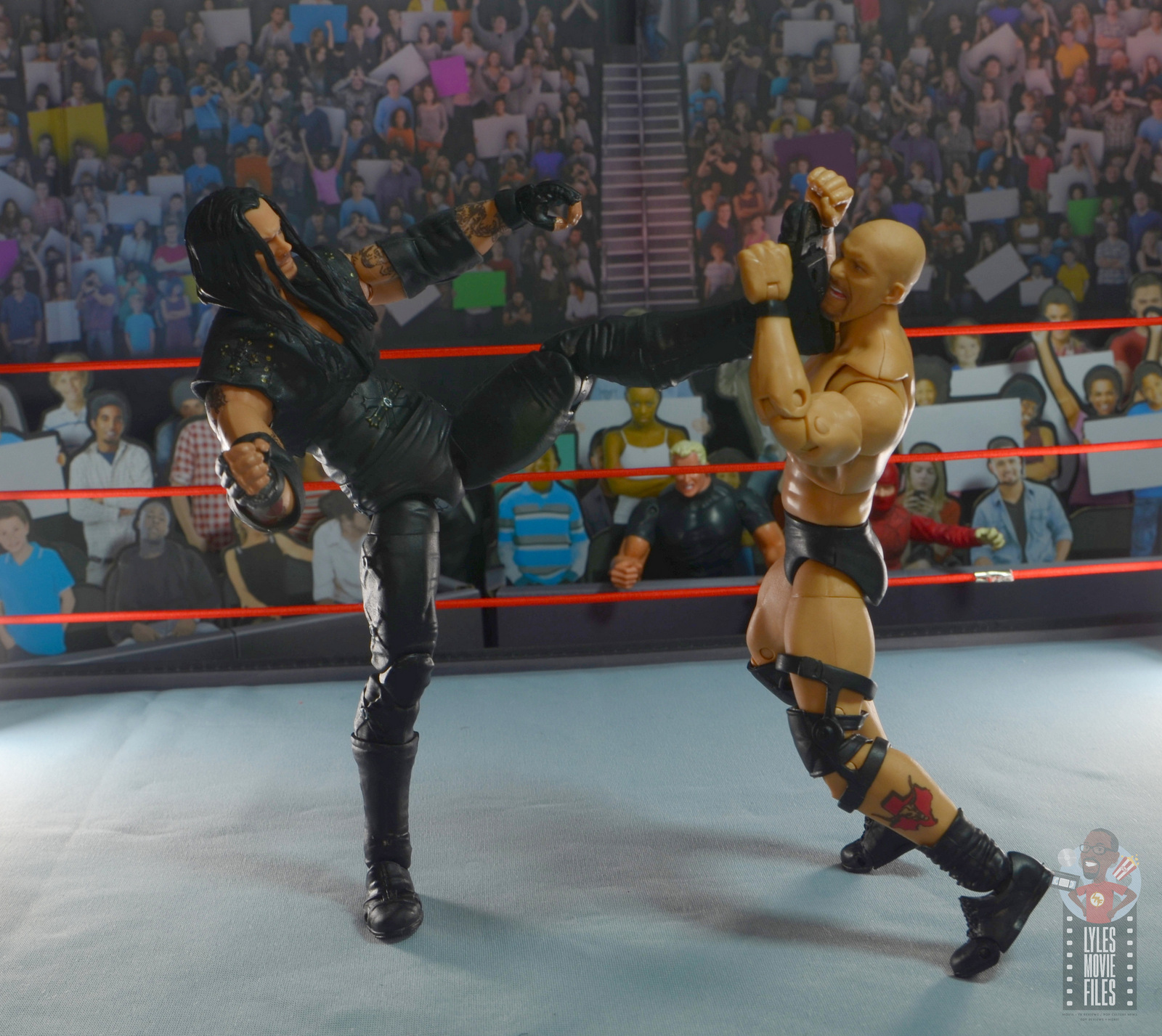 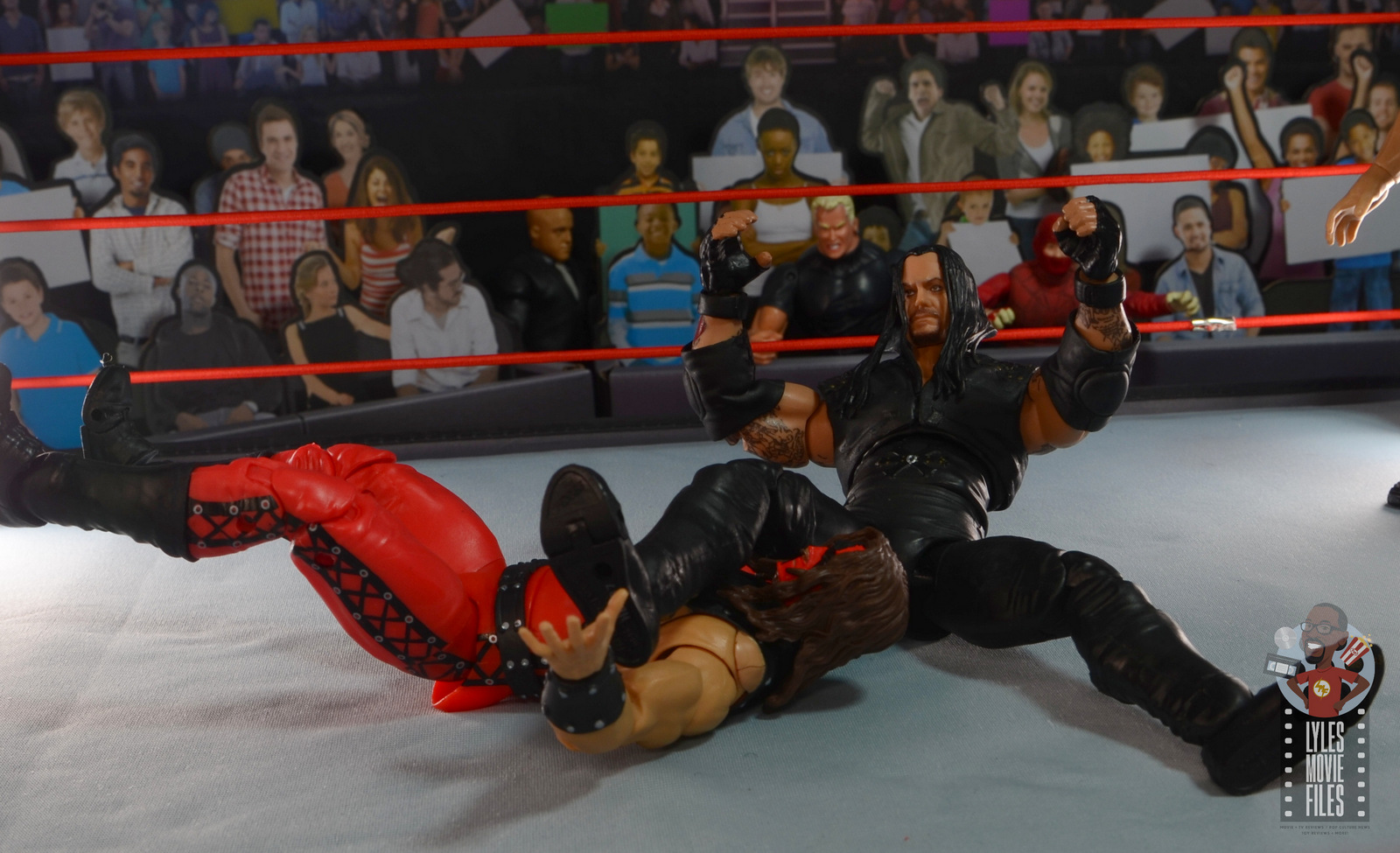 Accessories: This category does a decent job in justifying why this figure is worthy of an Ultimate Edition spot. 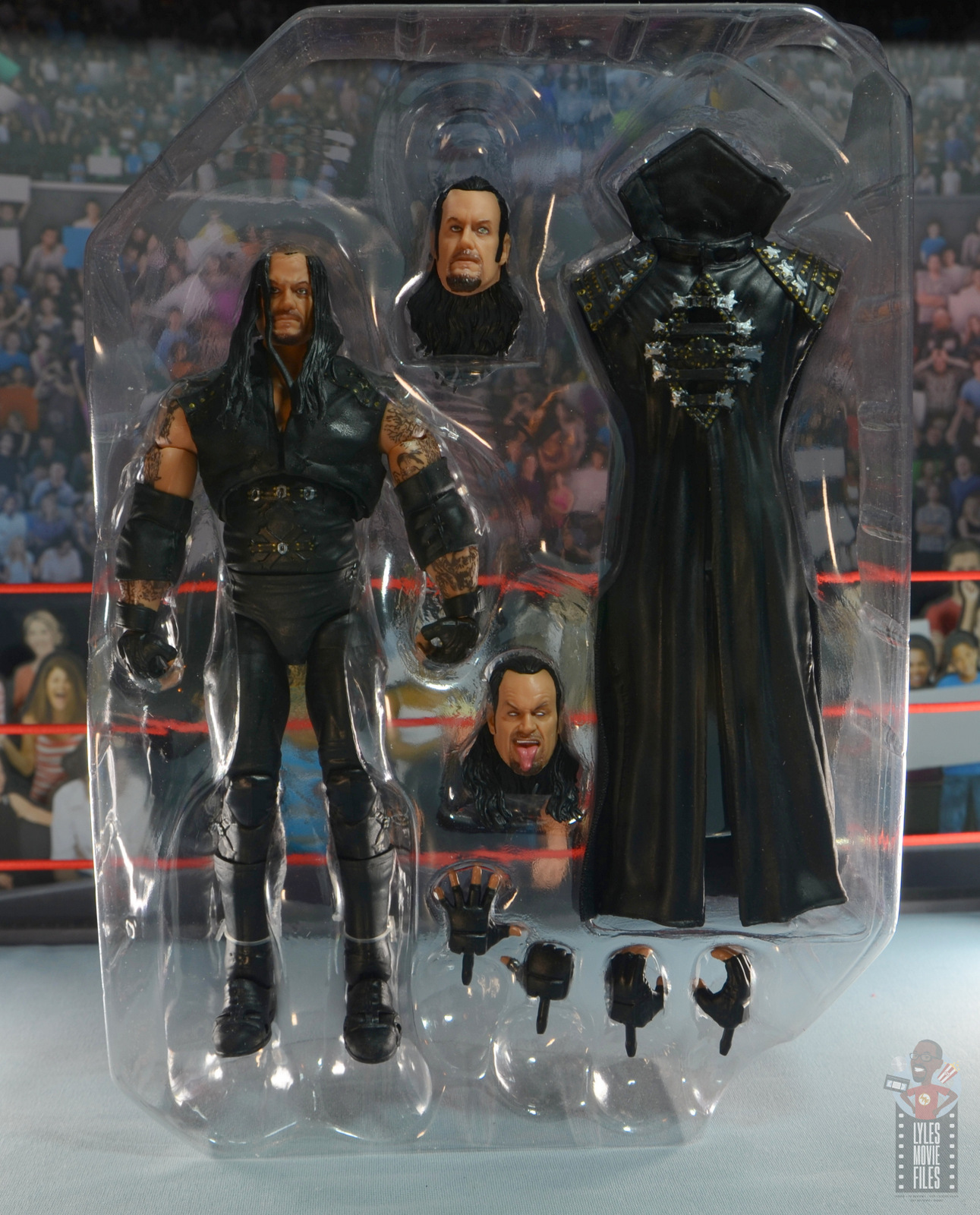 As with most figures, he comes with two alternate portraits that are reused from other figures. I’m not entirely sure if they were the best options for a 97-98 era Taker. 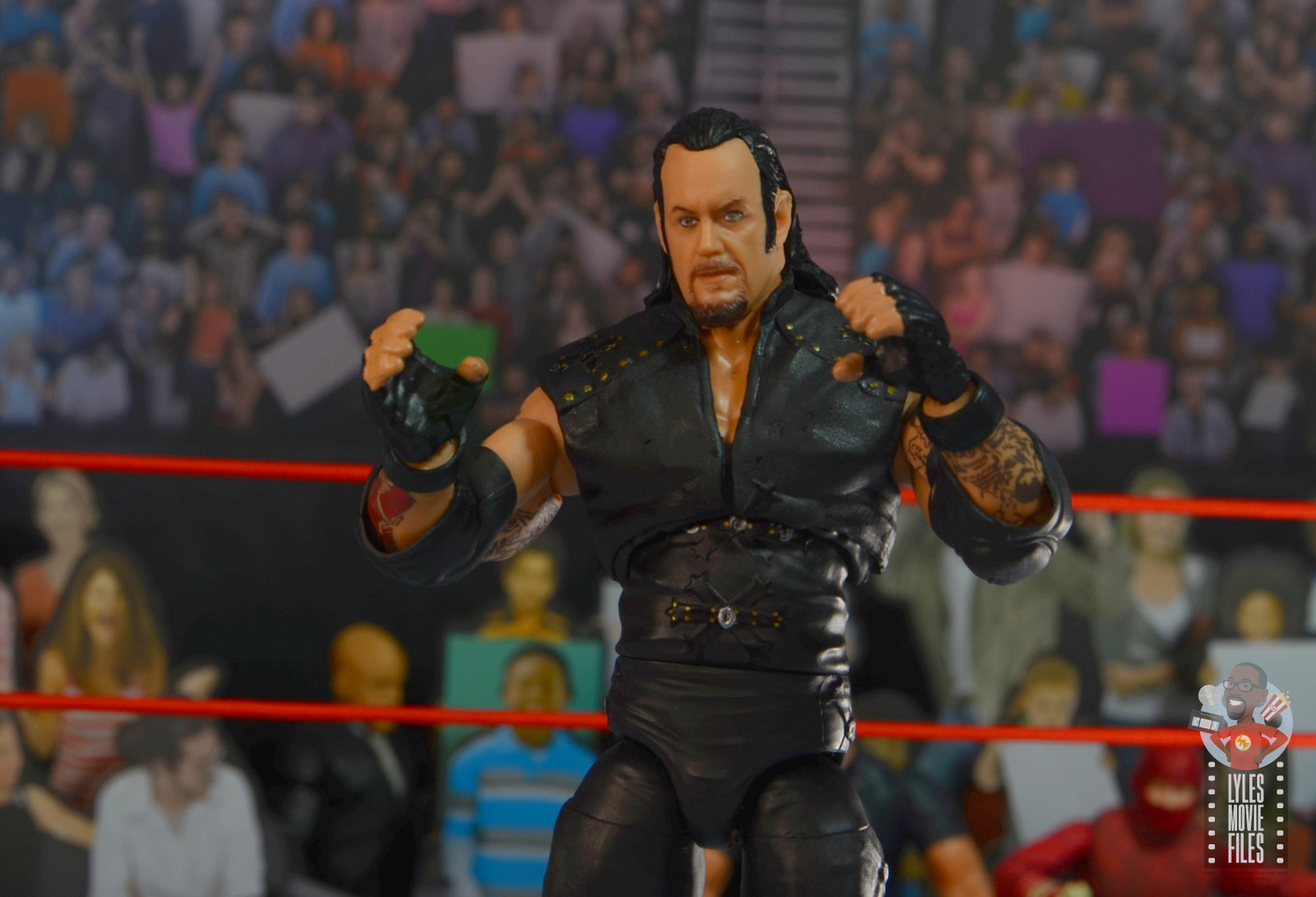 One’s a stern head sculpt and the other is a tongue out, tombstone applied and making the pin sculpt. They’re OK, but I wish Mattel added some hair to the front particularly with the stern head sculpt. 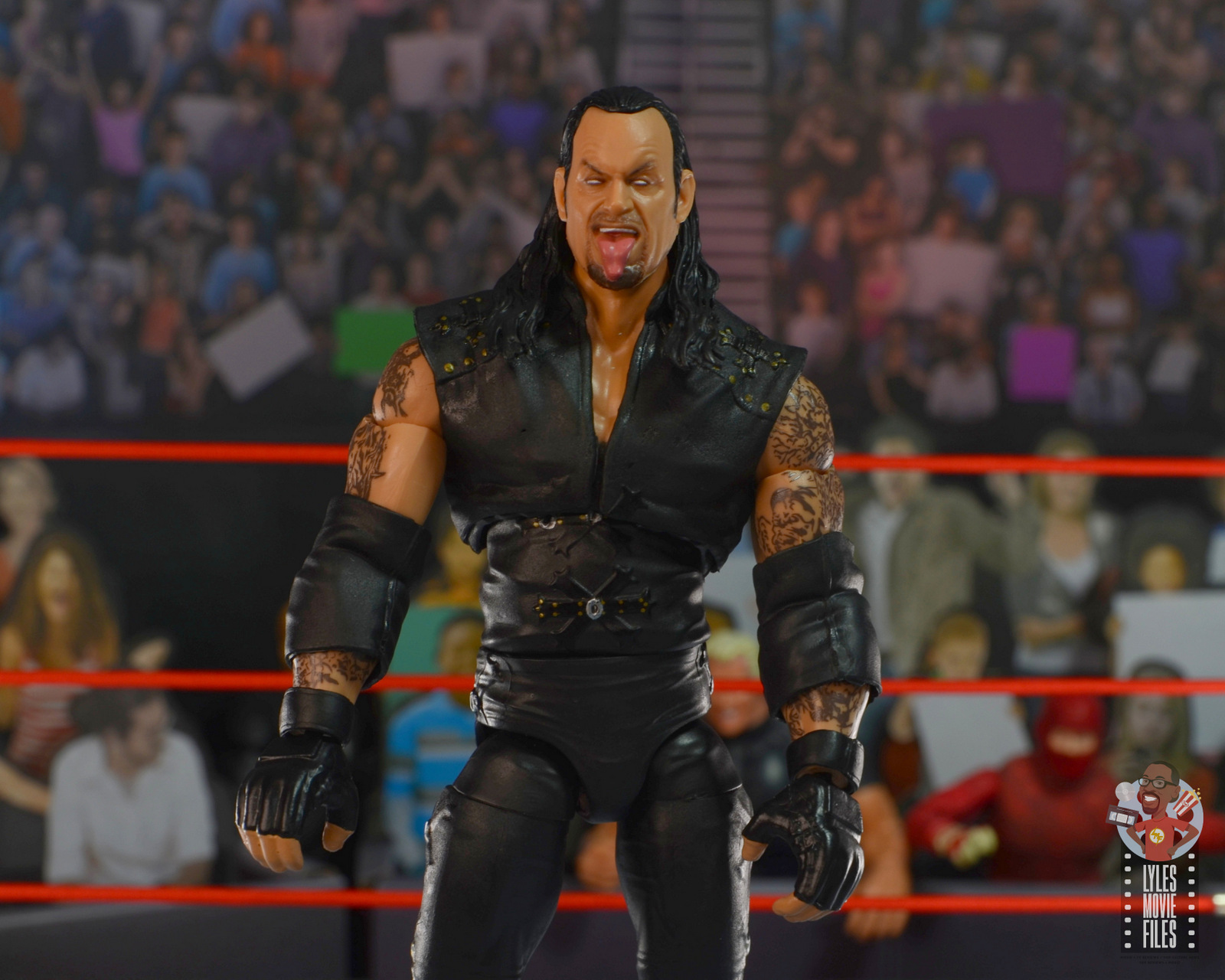 Taker’s got a flat palm left hand and a thumb out right hand for his Tombstone taunt pose, which is a terrific inclusion. 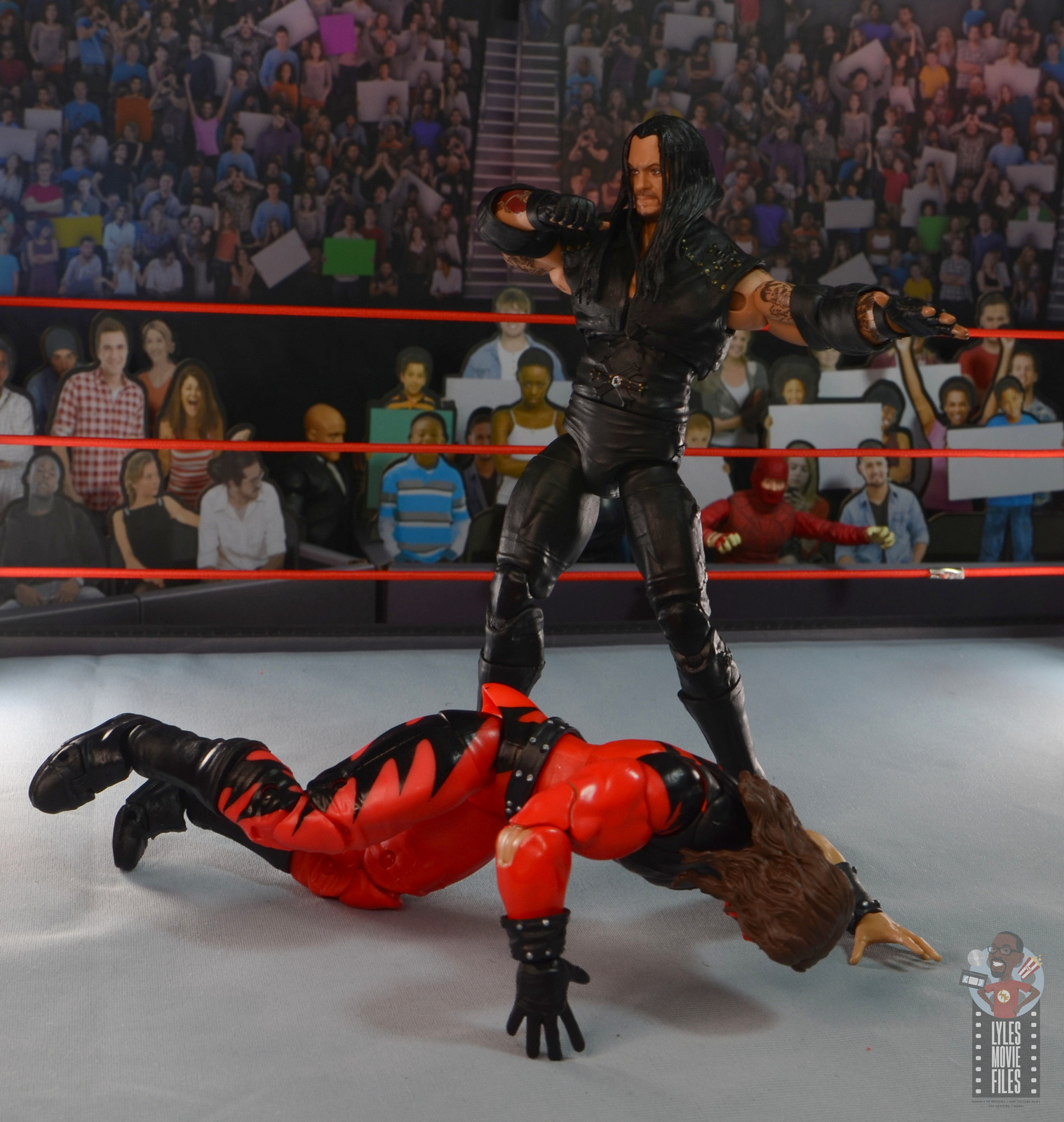 That’s the kind of unique accessory that makes the UE format cool. He’s also got a set of throat clutching hands.

The best is his entrance robe/cloak that he wore for his first match against Kane at Wrestlemania 14. 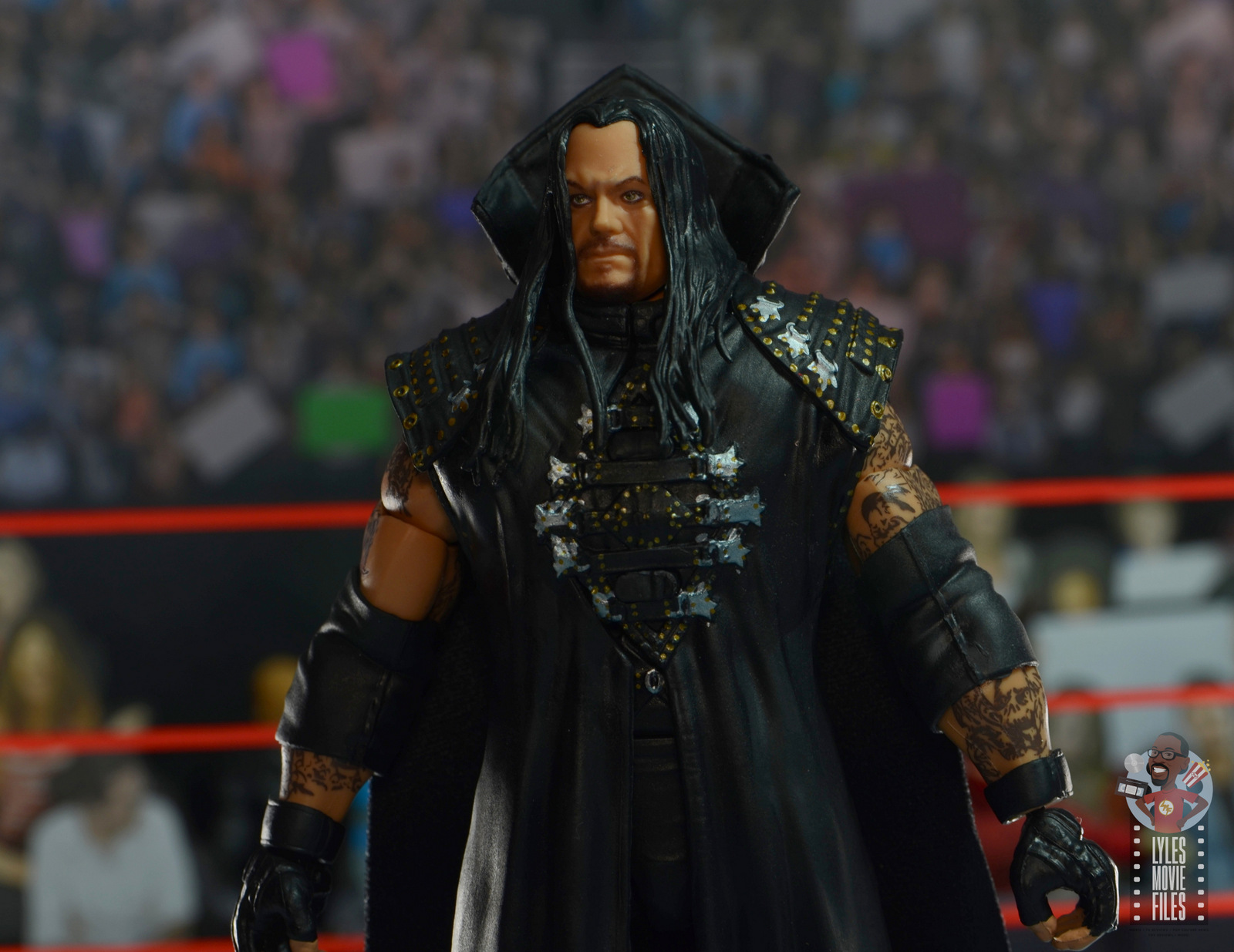 It’s very elaborate and highly detailed with the ornate buckles and a mix of sculpted and painted gold studs. It’s also a combination of cloth and plastic, which works very well. 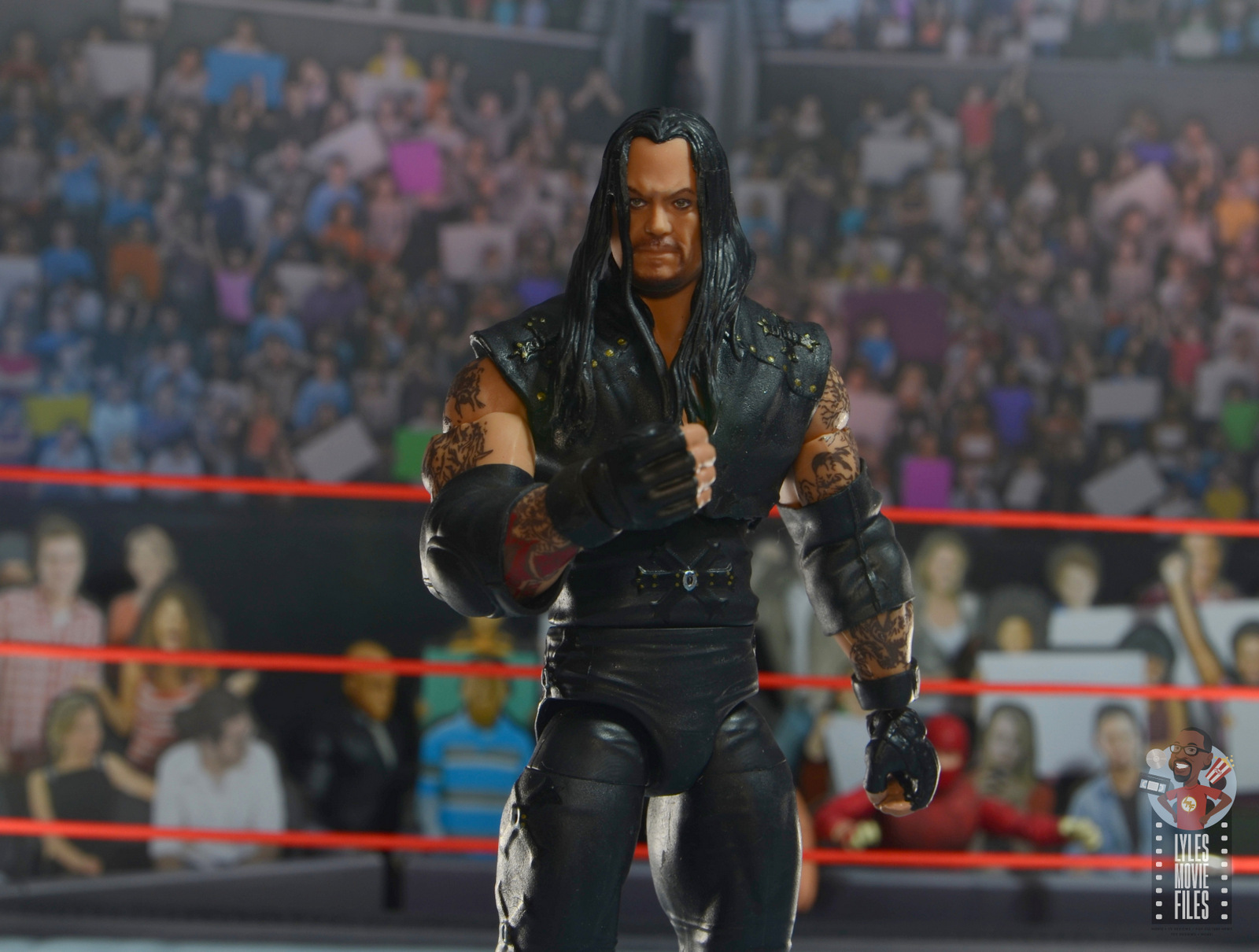 Worth it?  Mattel dropped the price of this wave back down from $32.99 to $29.99 price. I’d love for that to stay the price, but with the rest of the line going up that doesn’t seem likely. 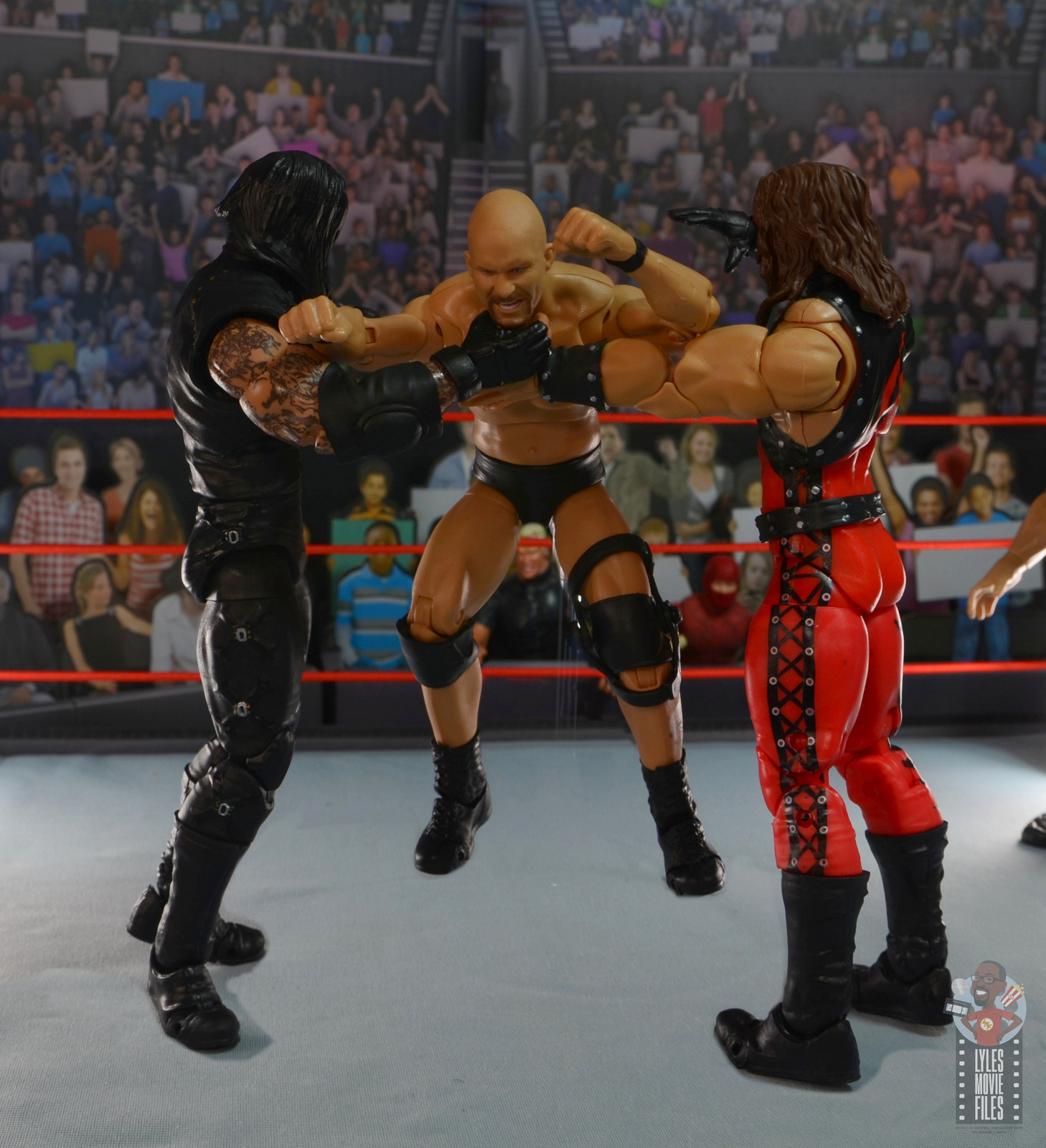 This was the Taker that was the missing version in my collection and Mattel delivered. The worthless additional heads hurt the final score, but this is a great figure. 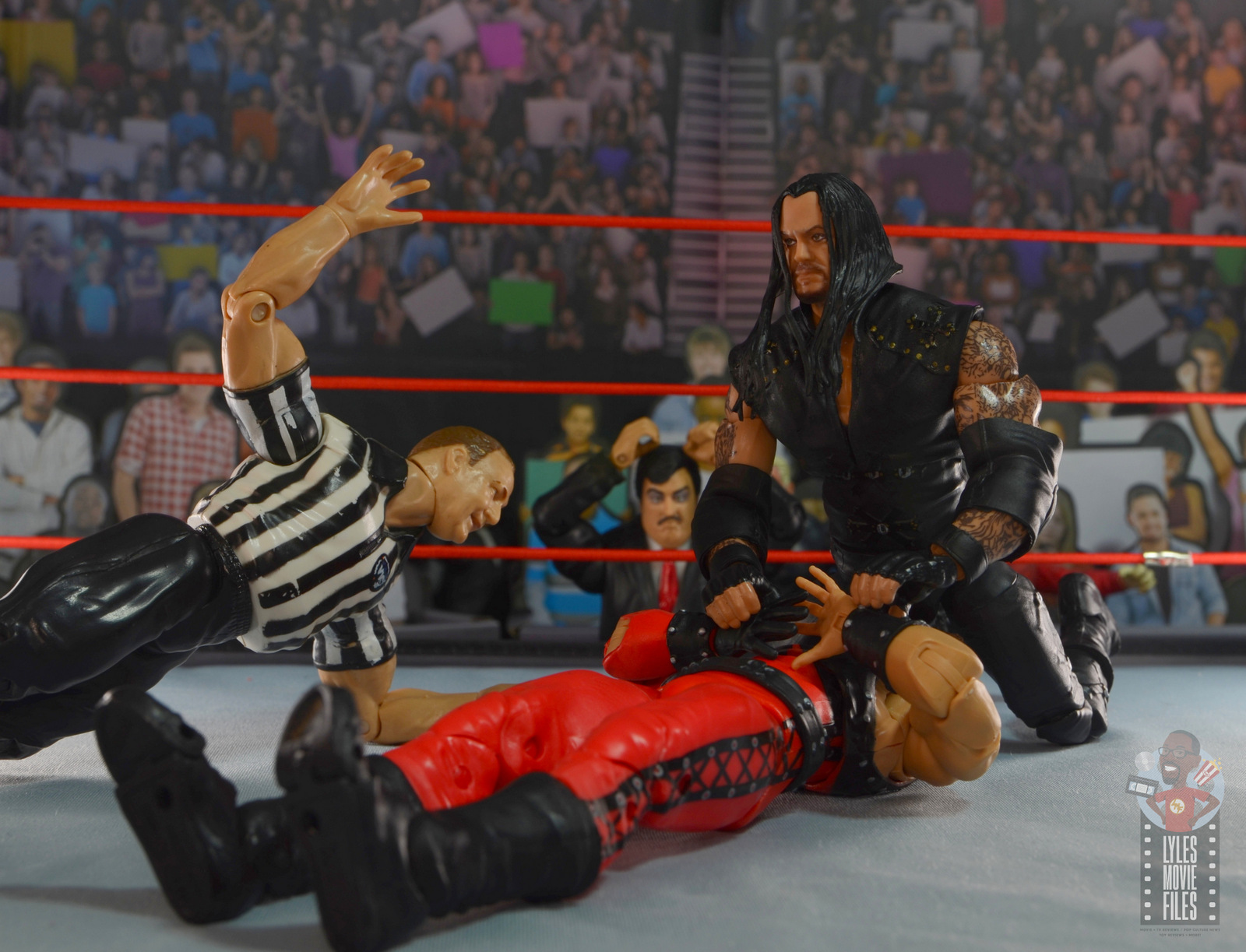 Where to get it?  The Ultimate Edition figures aren’t too tricky to find once they hit stores mainly Target. I’ve seen Kane at numerous scores, but hadn’t seen Taker yet so I stalked Target’s website until he came back in stock.

Naturally, my areas stores are starting to get him in now that mine was delivered.  He’s on Amazon although there’s no active listing just yet.