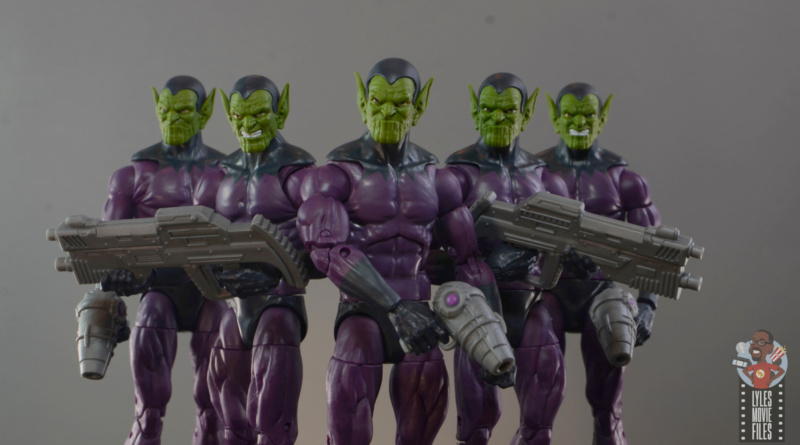 Maybe one of the best aspects of Hasbro Pulse is it’s served as a tremendous avenue to get some much-needed army builders for the Marvel Legends line. We’ve gotten AIM, Hydra, Hellfire Club soldiers, Hand Ninja and now another pivotal army figure — The Skrulls.

As popular as the previous armies have been, they haven’t had major events revolved around them like the Skrulls. The Kree-Skrull War and of course, Secret Invasion. The latter has proven so popular it’s been a key storyline in the fantastic Avengers: Earth’s Mightiest Heroes and will be the subject of a MCU Disney+ series. Not bad for some bad guys who originally got hypnotized into turning into cows in their initial appearance.

My max allotment of five Skrulls arrived, and I am very excited to check them out. Let’s see if they turn into some of my favorite figures for 2022.

Packaging:  I appreciate the packaging here as it only features five Skrulls. It seems like a smart nod of acknowledgement that building massive Skrull armies might be tougher than AIM and Hydra grunts. 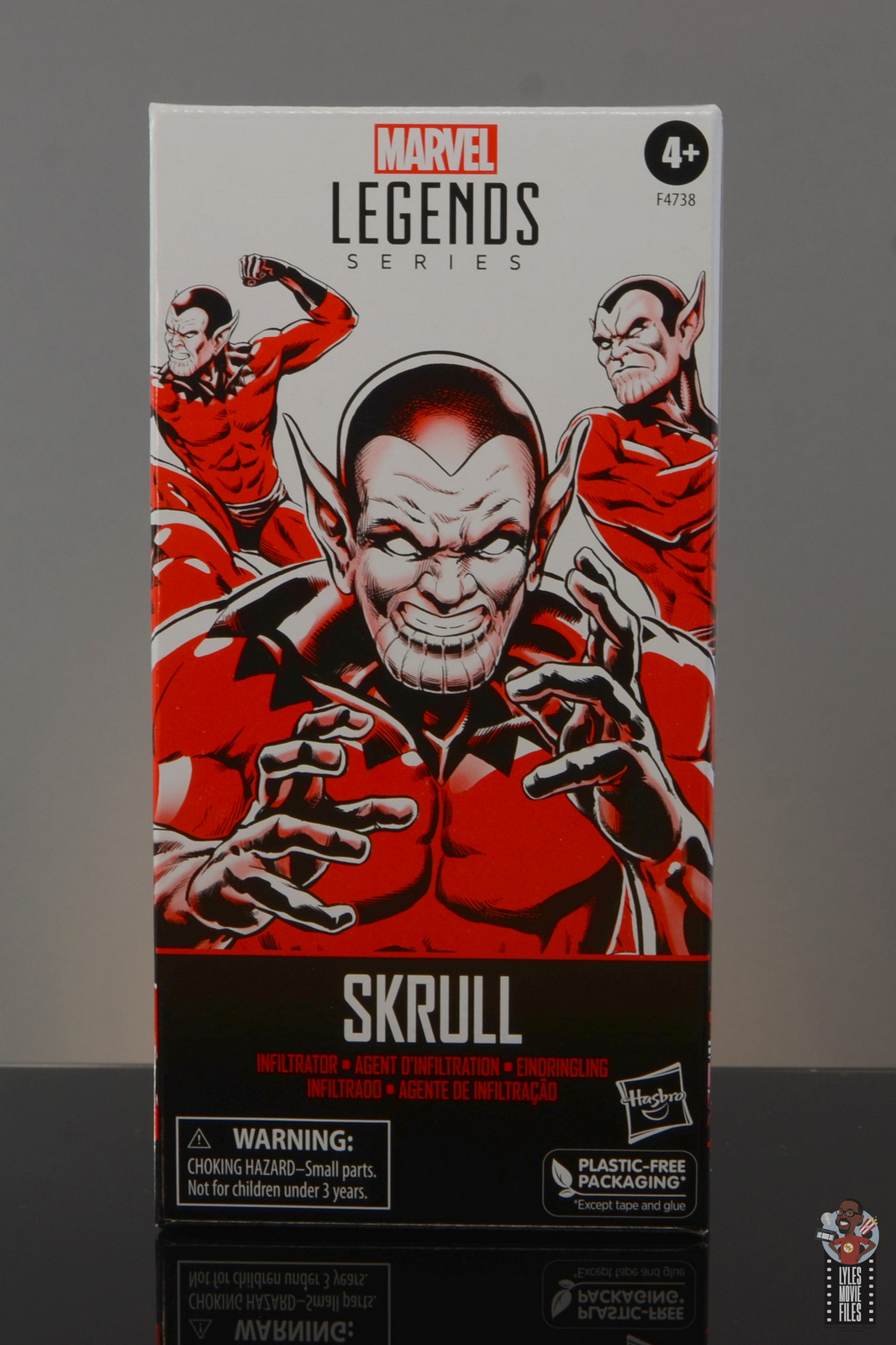 Again, it’s a simple white box with the characters colored with various shades of red. The consistency is nice, but it might have been cooler to have the accent color here be green. 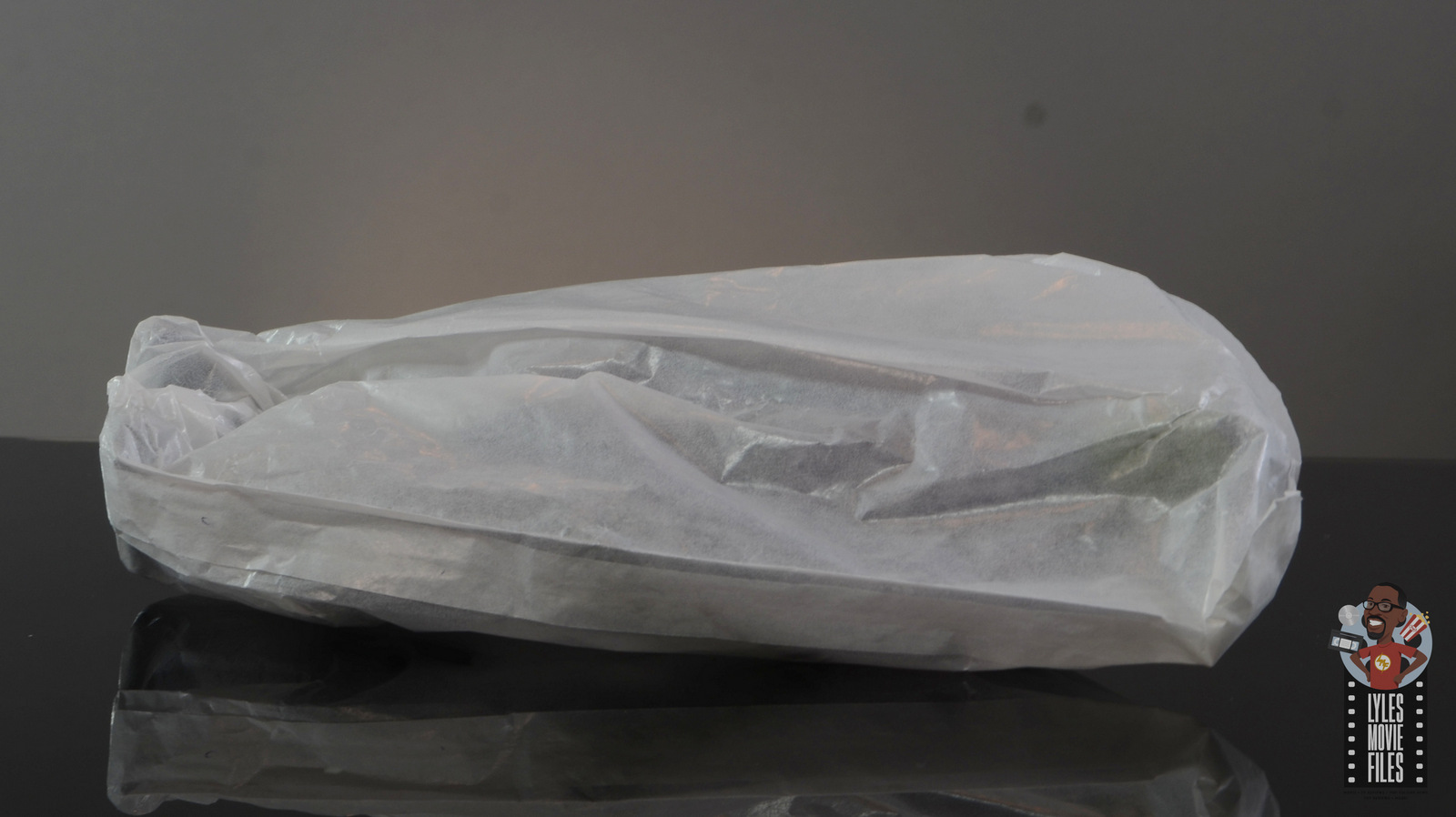 The figure itself comes in a opaque plastic baggy like old school mail-ins. Of course, the one missing aspect that I wish were included was a bio. Maybe this is where the ML team can borrow a page from the GI Joe team and have bios on a dedicated Hasbro Marvel Legends website?

Likeness:  Hasbro previously tried to do some Skrulls on the cheap reusing the Super Skrull mold in a two-pack with a Kree soldier. That’s a terrific two-pack idea, but the execution was lackluster. That sent many collectors scrambling to Skrull army build with the Diamond Select set that featured two smaller Skrulls based on their earlier look. 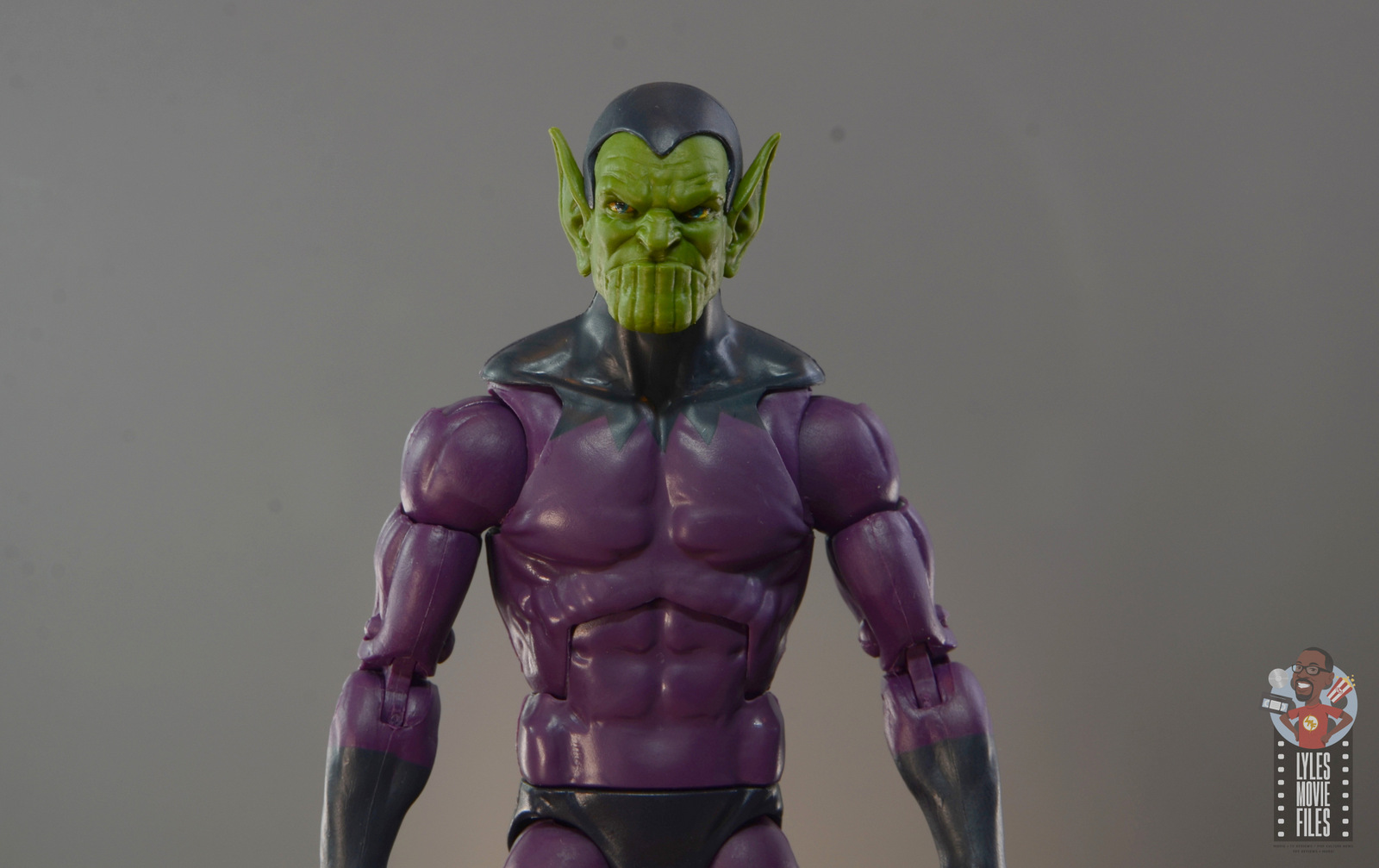 Capitalizing on the Secret Invasion hype, Hasbro then released a Skrull chase version of the Elektra and Ronin two-pack.

It’s taken Hasbro awhile, but as usual, they finally got it right. The Skrulls change their uniformed look pretty often, but this is a fairly safe and reasonable choice. An overlay for the collar piece would have been nice, but also would have been tricky/impaired the articulation to a degree. 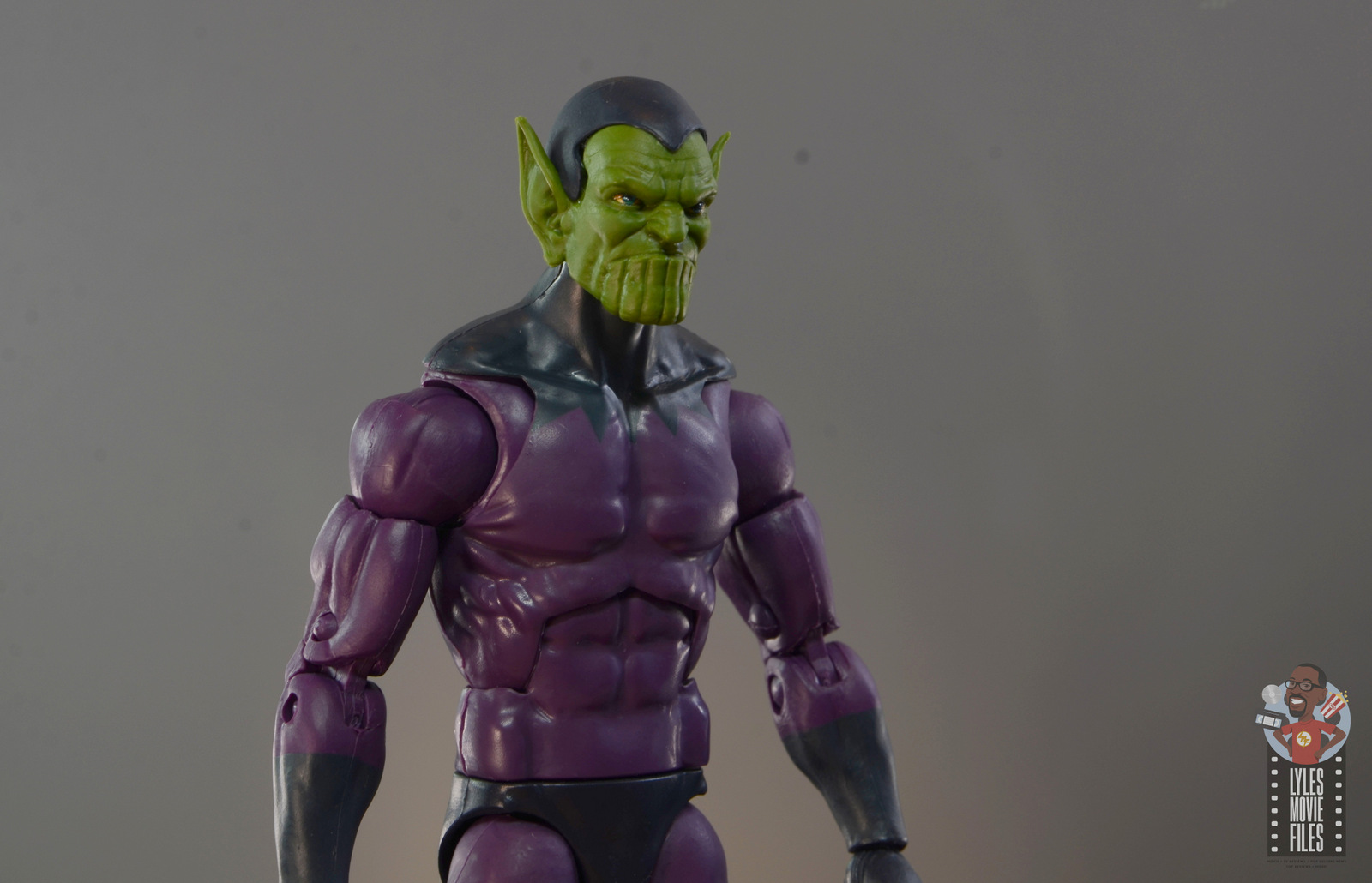 The highlight really is the head sculpt. It captures the intensity and calculating nature of the Skrulls. The furrowed brow synchs up well with the signature ridged chin and flared pointy ears. There’s a lot of character coming through with this head sculpt and it’s exceptional. 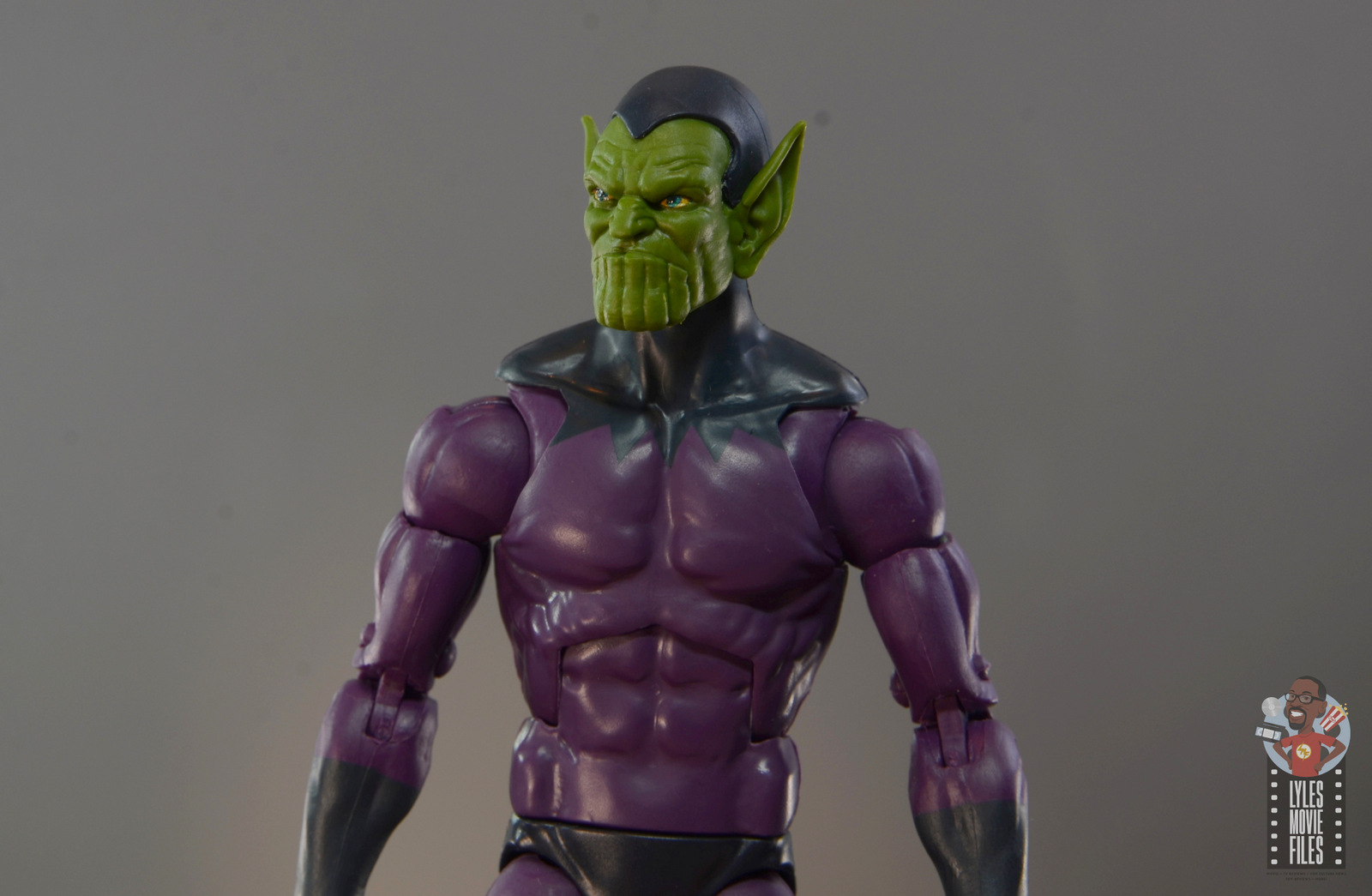 Paint:  The Skrulls tend to use a magenta or purple color scheme with dark blue shoulder pads, gloves, tights and boots. Magenta definitely would have popped, but I don’t have any issue with going with the purple.

Besides, the more important color is the green skin tone. It’s hard to avoid the Green Goblin comparisons, but Hasbro went with a different hue from Normie. Despite the lack of a wash, the green catches the grooves in the head sculpts very well. The yellow eyes and green irises were applied crisp.

Scale:  Skrulls are regular height and are eye to eye with standard size heroes like Hawkeye and Black Panther, but will have to look up at Cap, Iron Man and Thor.

That also plays well into the Skrull gimmick and having them replace other characters. This is a cheap way to build up your Skrull army and finally find a use for all of those figures you haven’t managed to sell on eBay yet. 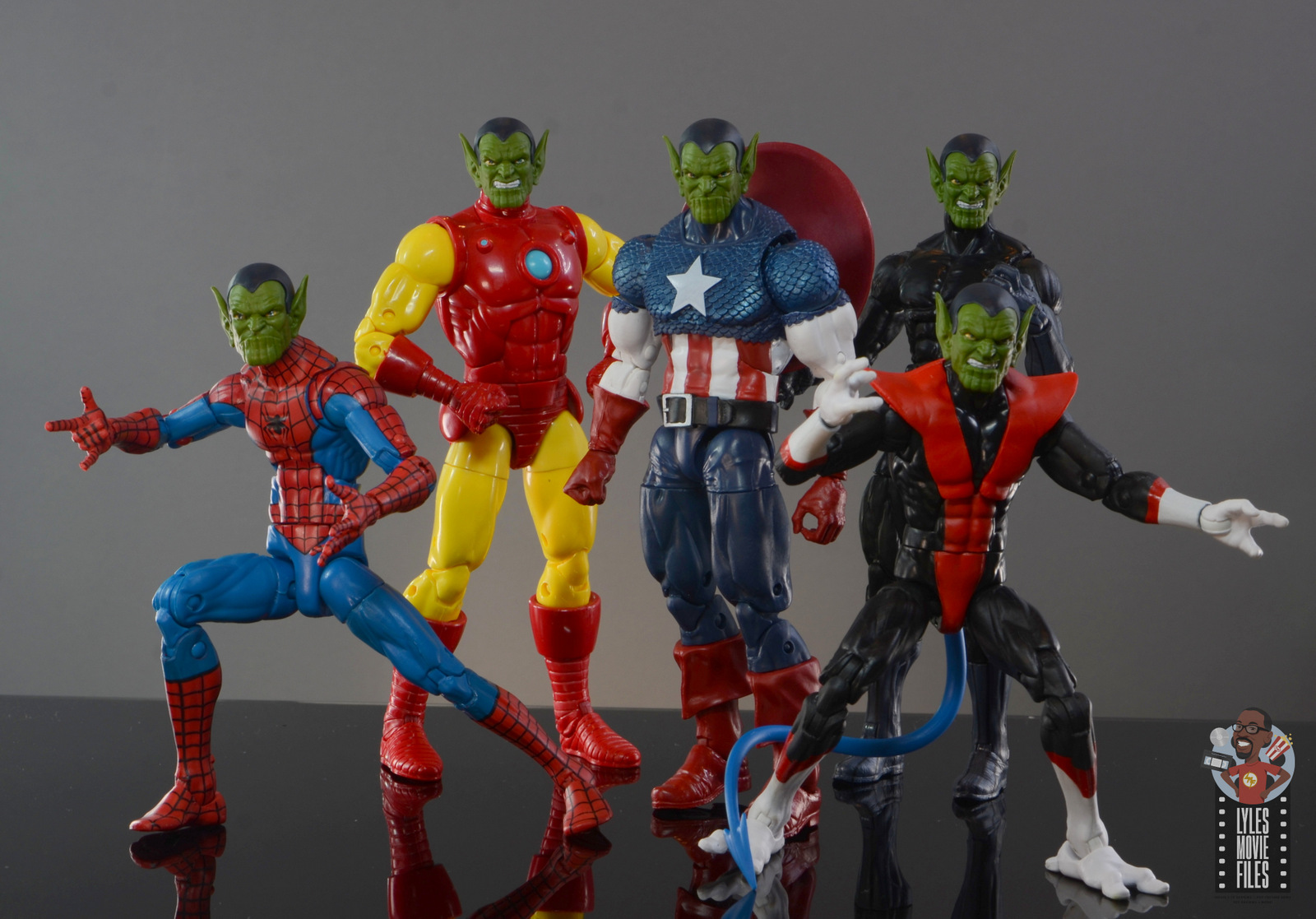 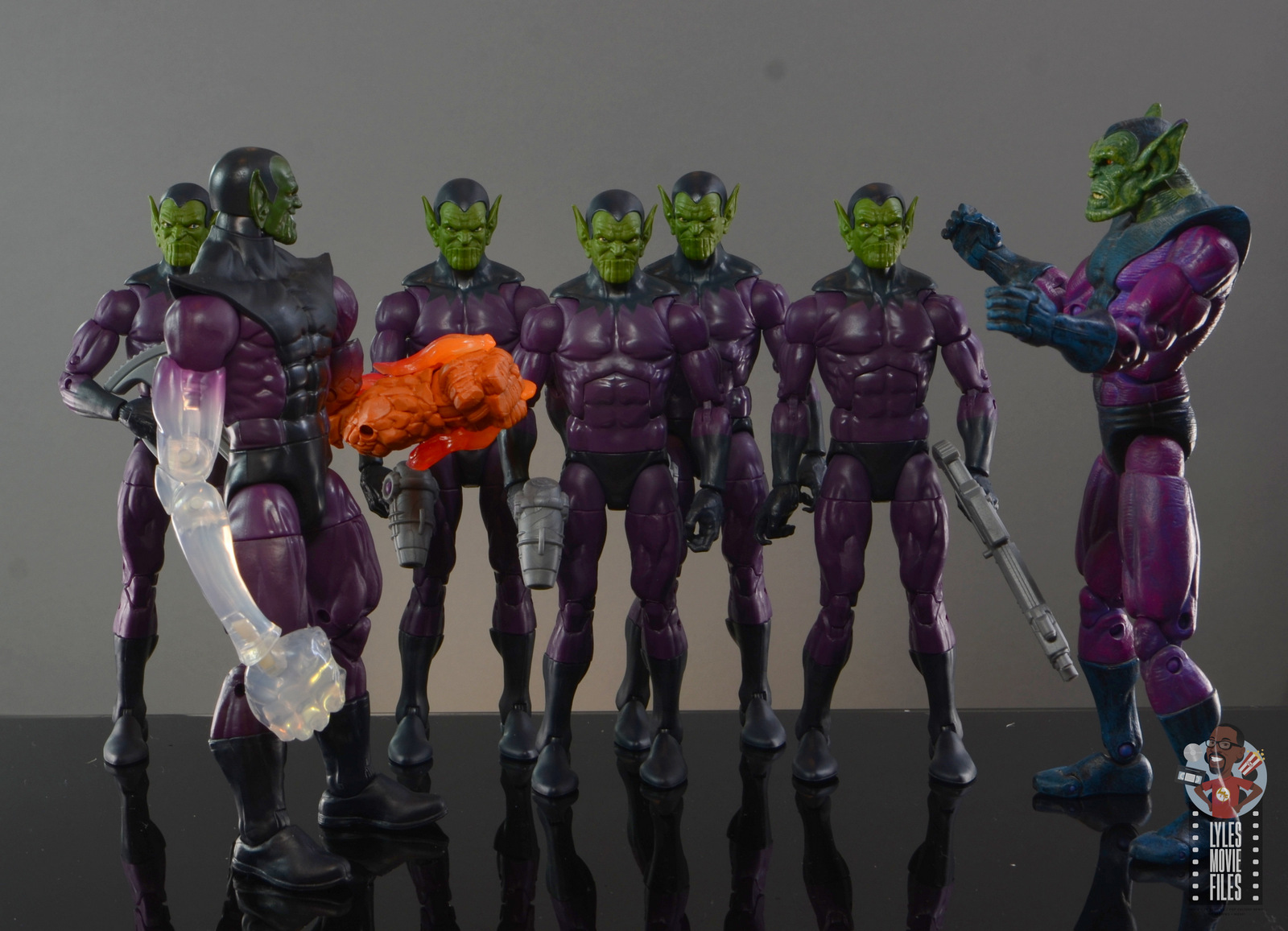 Articulation:  Hasbro went with the Sunfire mold for the Skrulls. 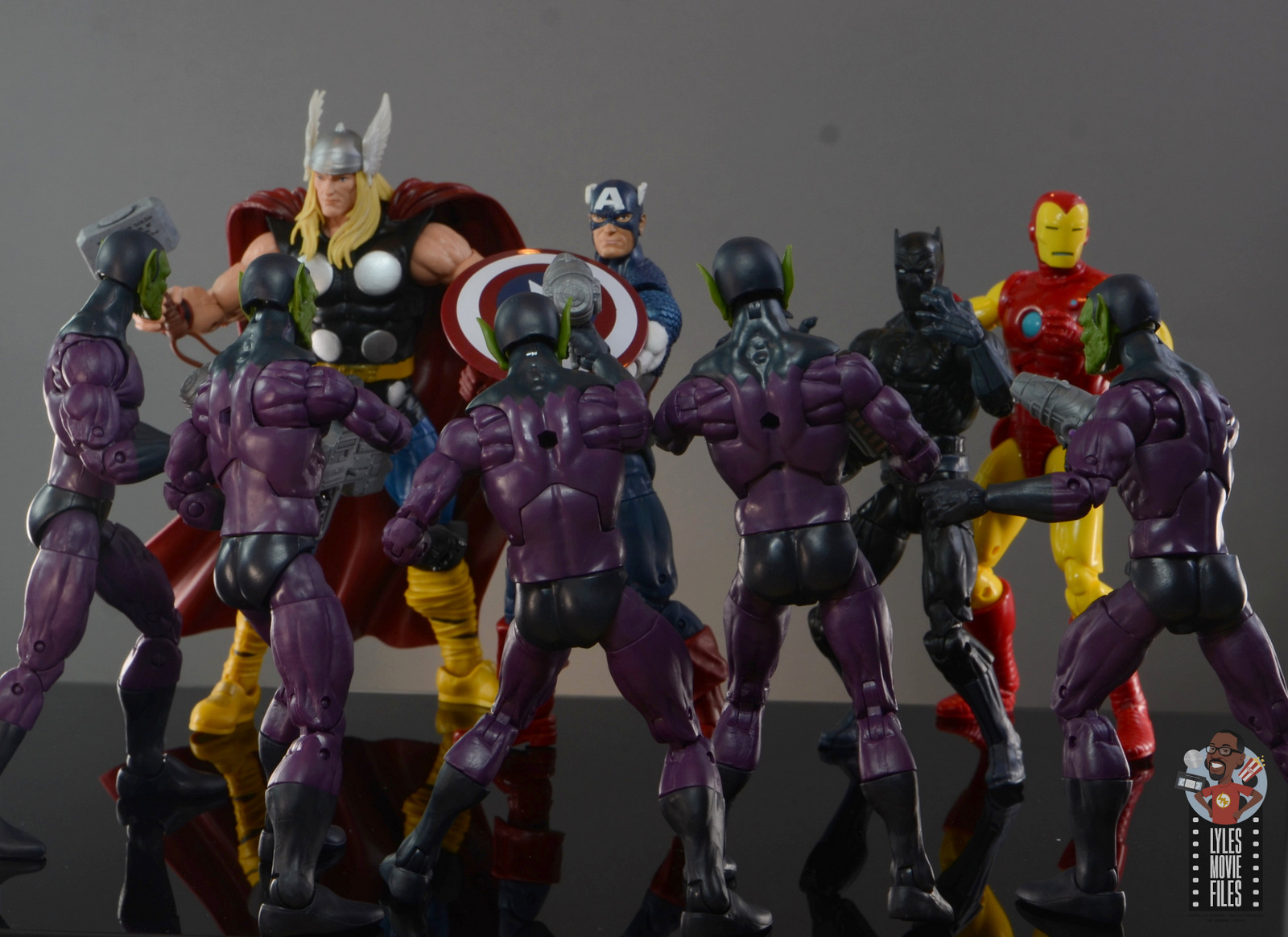 That’s a great choice as it’s one of Hasbro’s most articulated bucks thanks to the butterfly shoulders adding another degree of poseability. 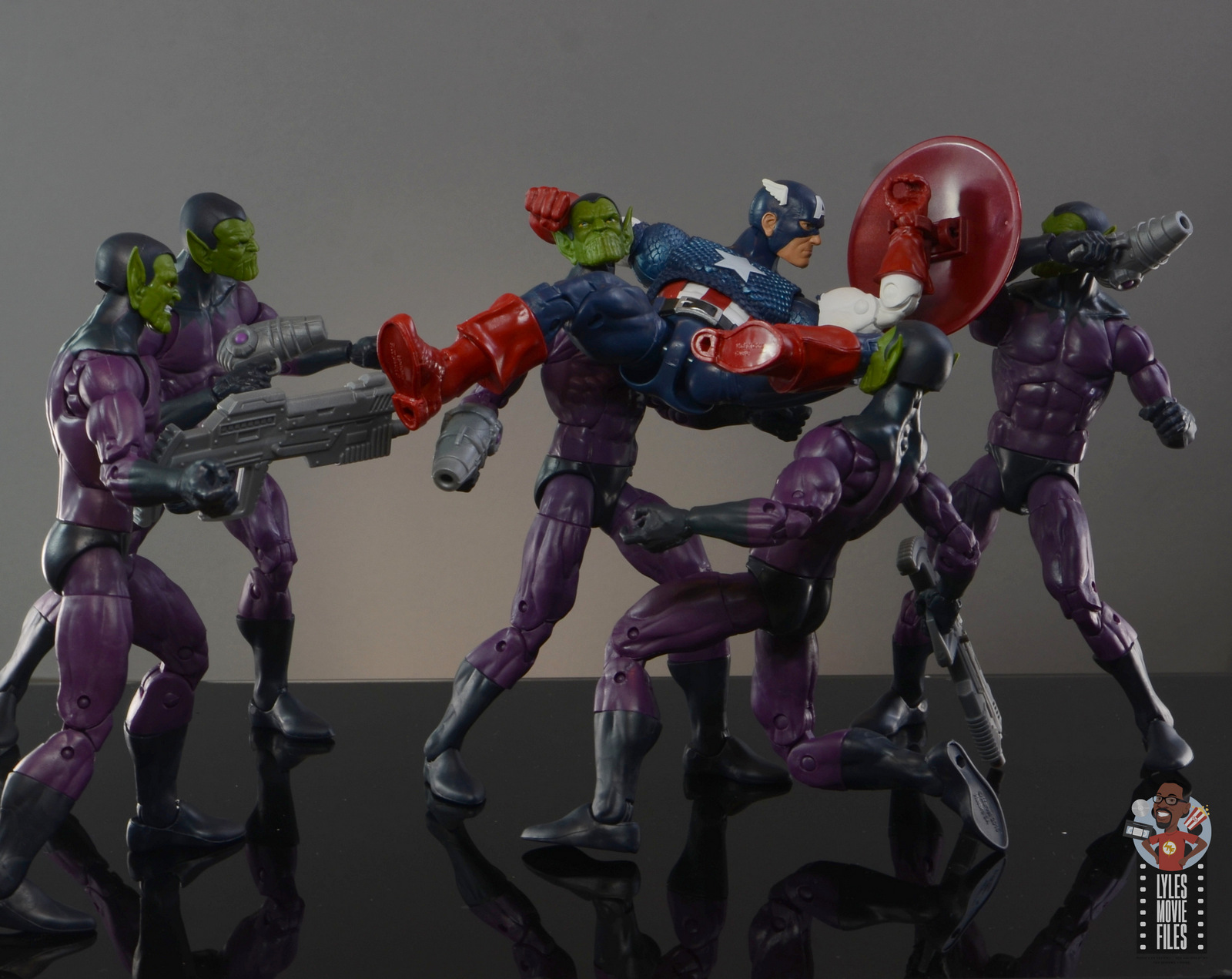 And the thinner, more poseable body also makes for more fun whether ganging up on the Avengers or getting demolished by The Thing and Human Torch. 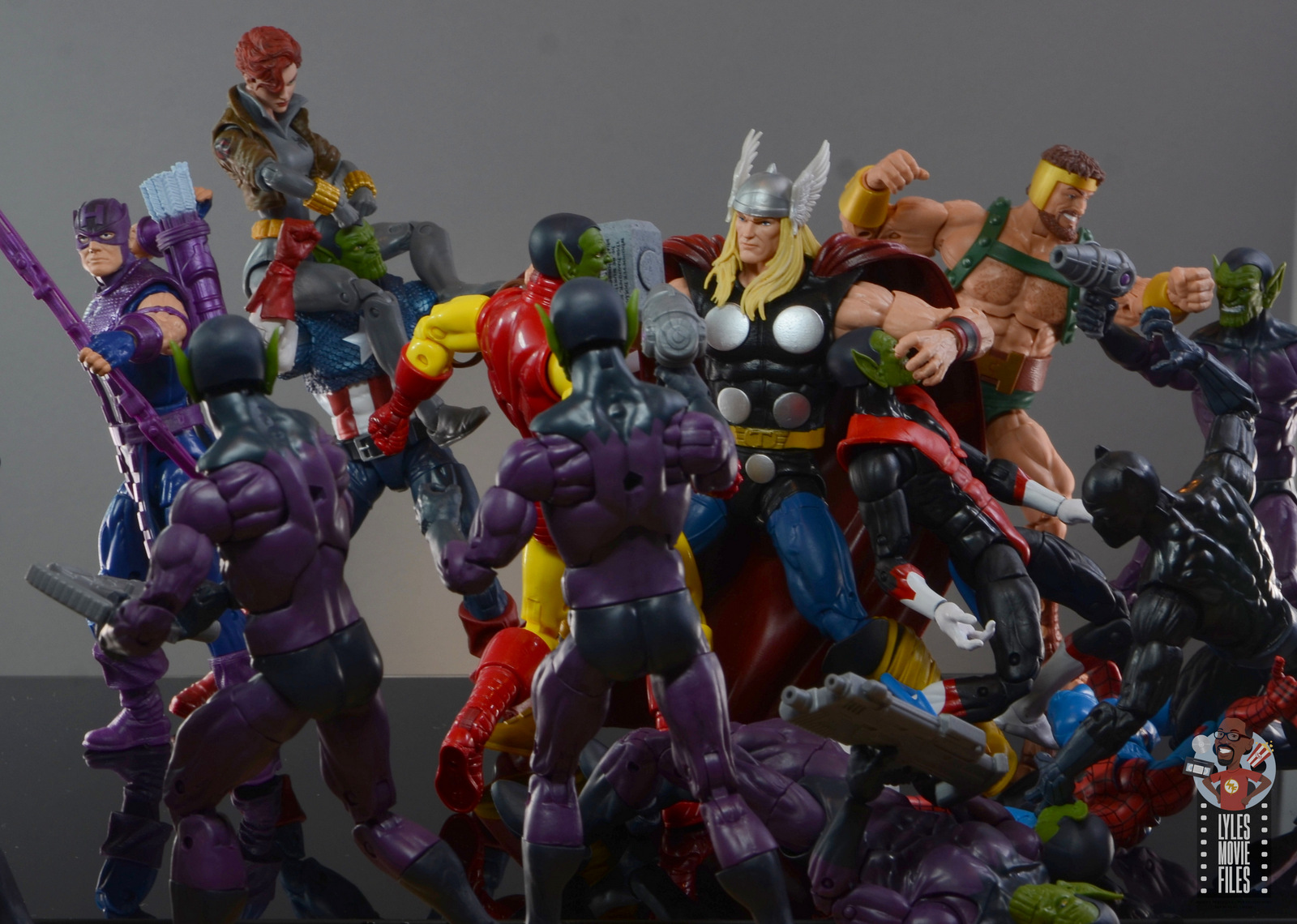 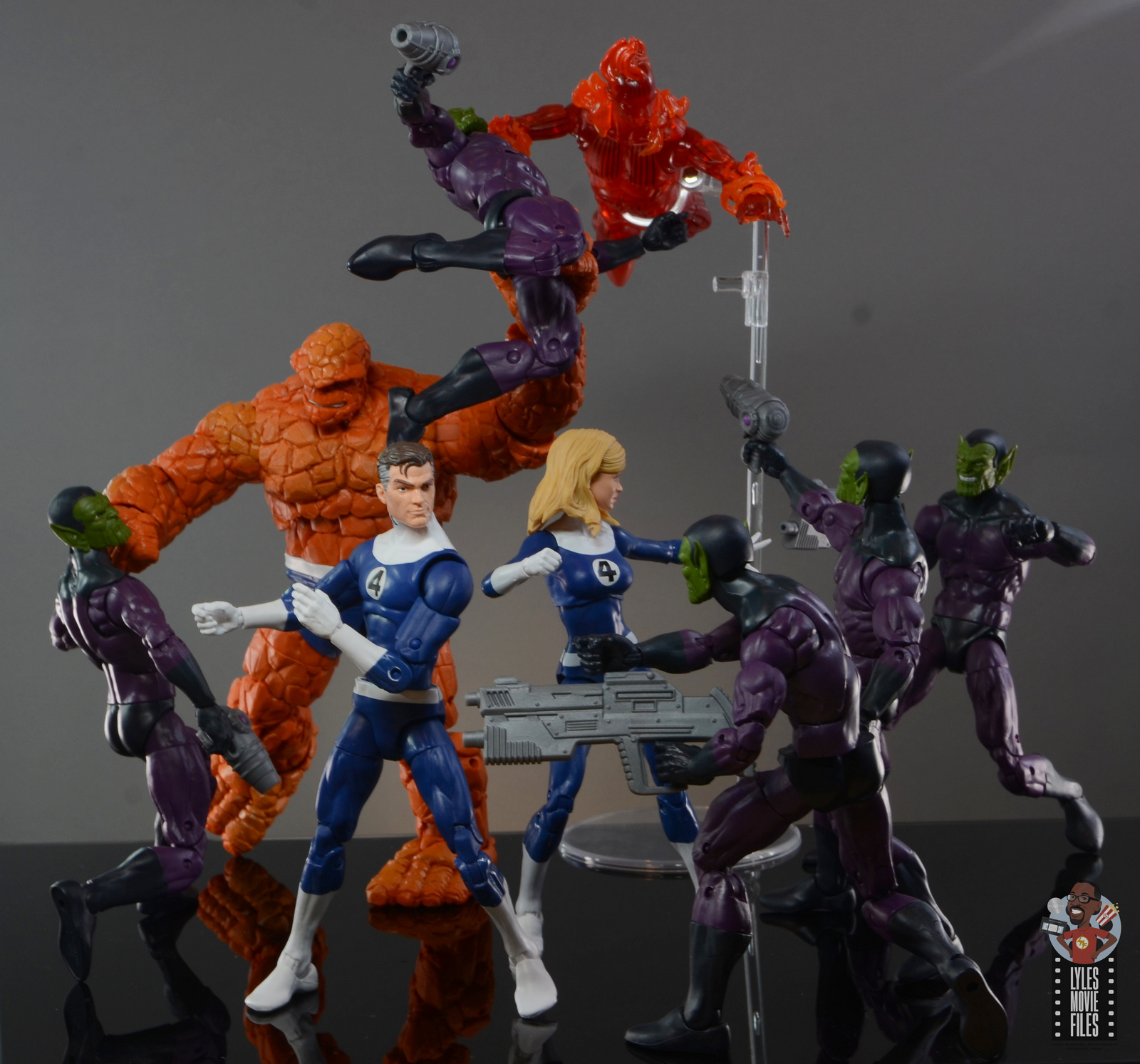 Accessories:  The Skrulls have a solid allotment of accessories.

First is the “hair dryer” style blaster. It has an impressive amount of detailing from the circles, the energy readout on the side and the grooves along the handle. It’s a fun space design and comic accurate. 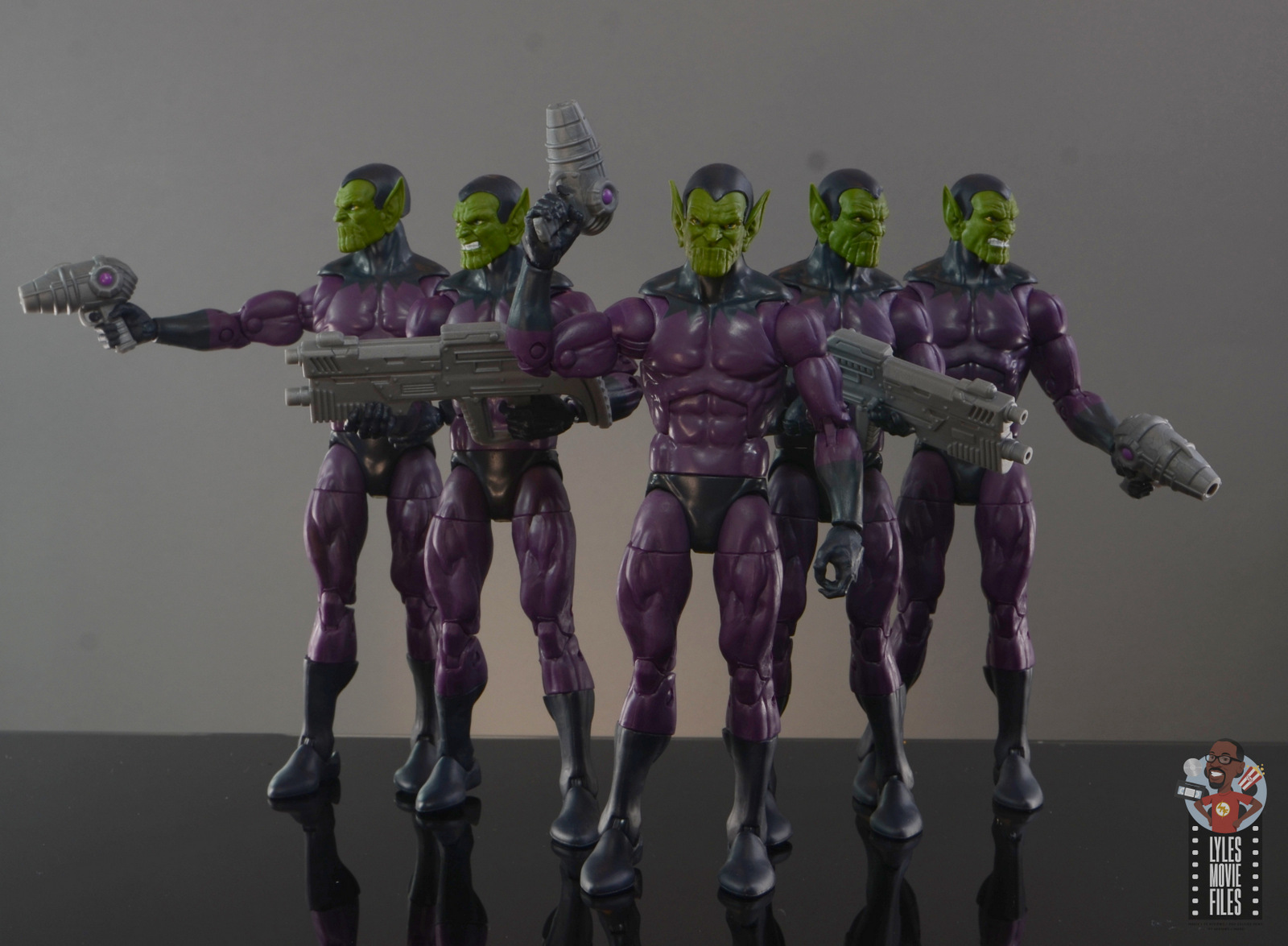 Additionally, the Skrulls get a massive blaster. Again, it’s highly detailed with all kinds of panels, lining and grooves complete with a shoulder stock. It’s a little big for one hand and works best held in the left hand with the right hand holding the barrel.

Finally, there’s an alternate portrait. This is a more expressive gritted teeth sculpt. 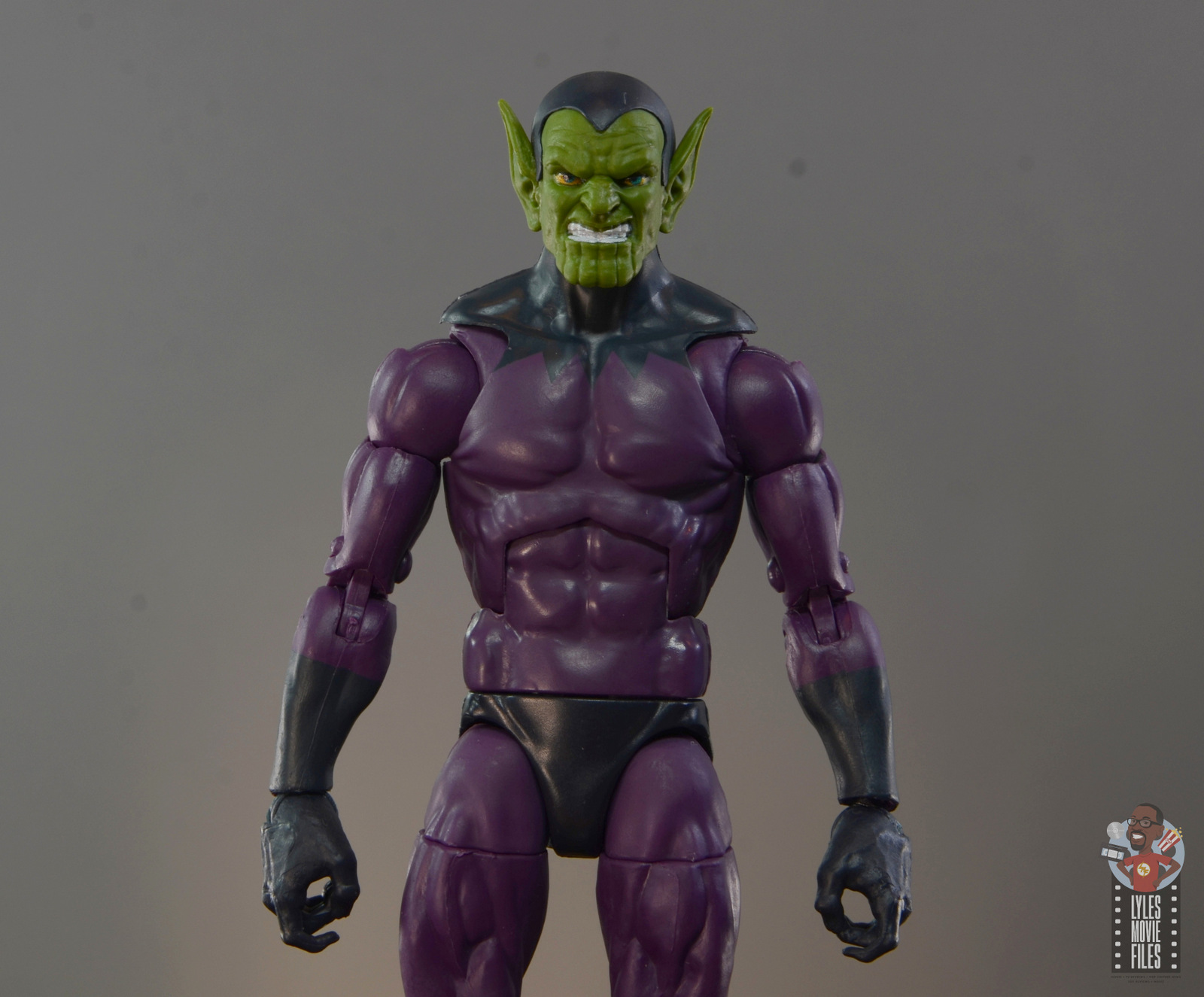 This naturally helps in mixing and matching the look of your army.

Thanks to the multiple weapons, there’s a decent amount of looks you can create in your Skrull army.

Worth it?  You’re getting any army builder without the excess packaging and Build-A-Figure piece for $15. That’s a good clearance price for your standard Marvel Legend figure so this was a good deal. And maxing out and buying five met the free shipping threshold making this an easy win. 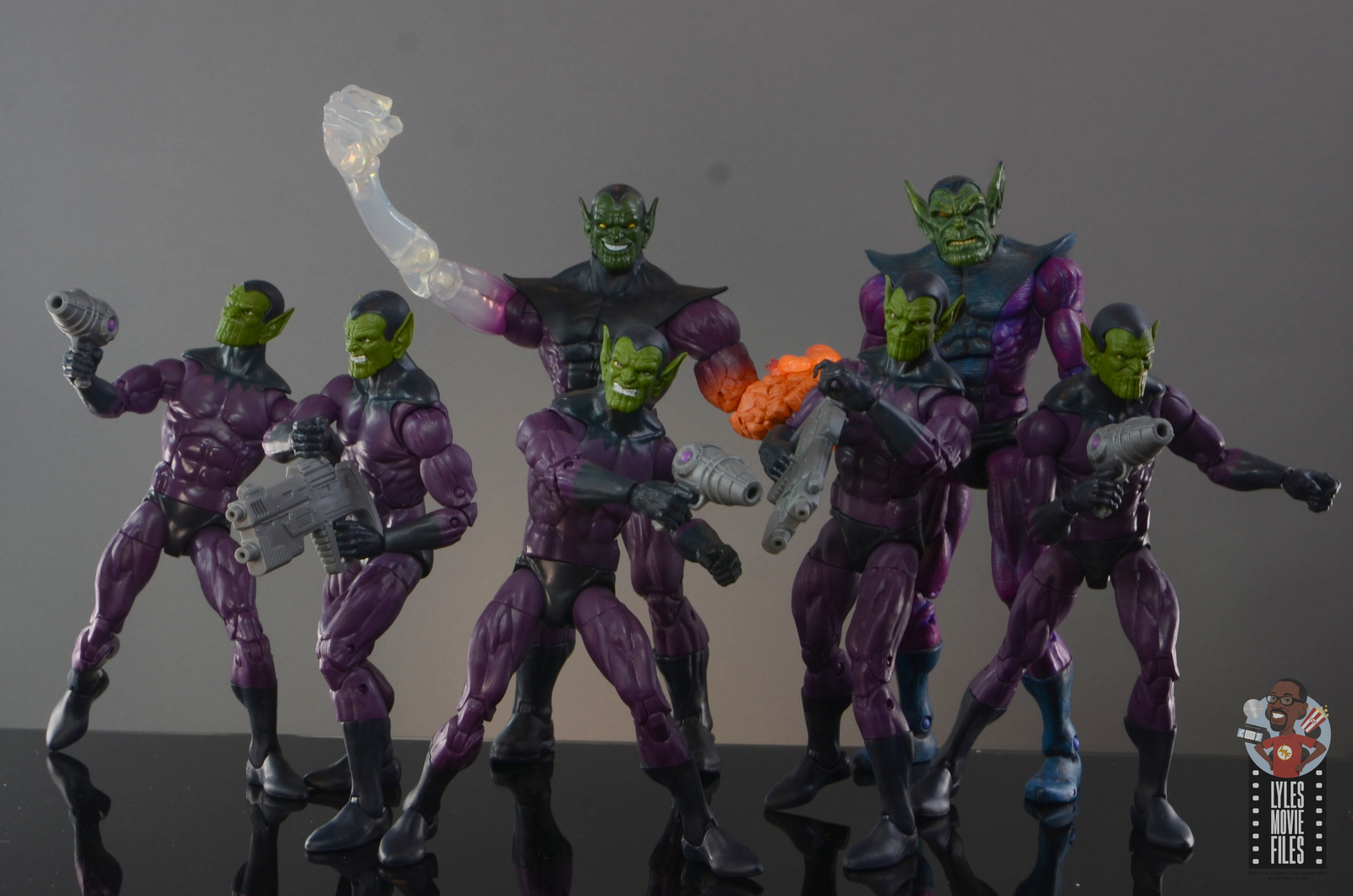 Hasbro’s quality has been a little spotty as of late, but it’s tough to knock a figure of this quality for a very important army builder. The only downside is these aren’t readily available to order more at any time. 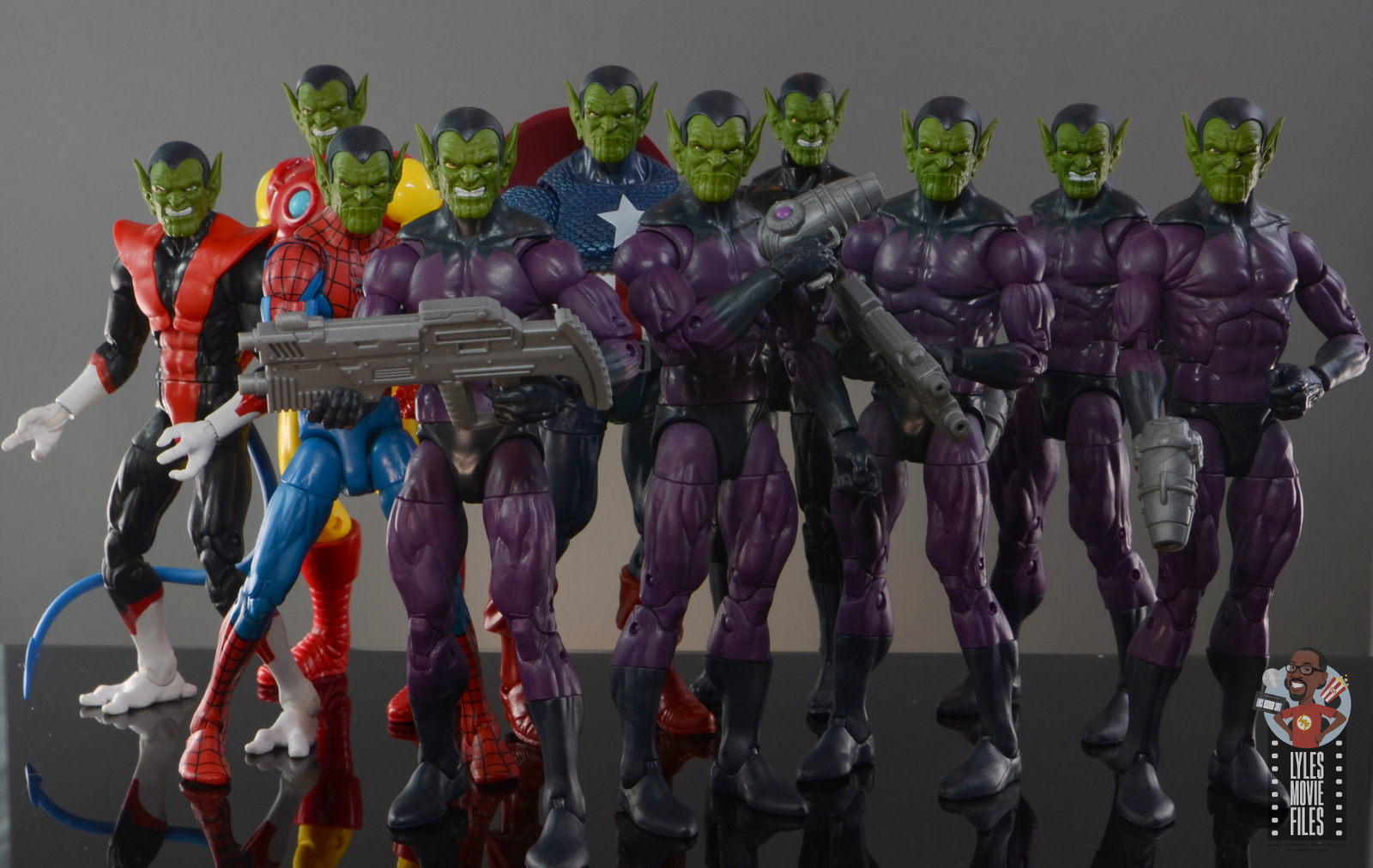 Where to get it?  You can only order the Skrull soldier from Hasbro Pulse. Right now it’s sold out, but they’ve popped back up at least once so keep an eye out if you missed them or just want to fortify your army.