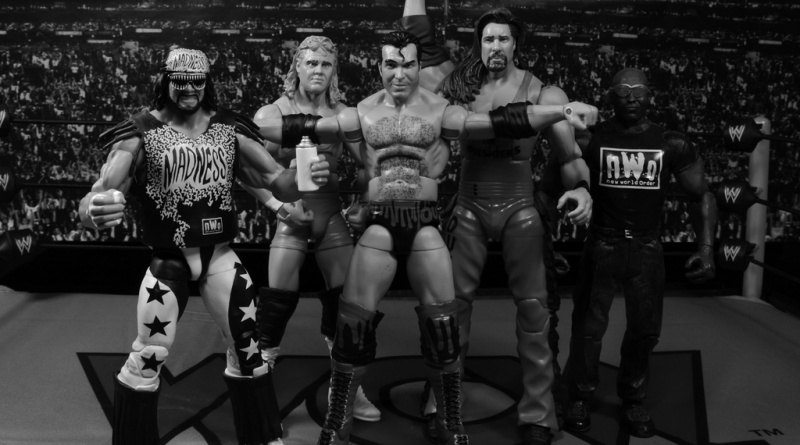 It always sucks doing these. Scott Hall was the coolest wrestler when that meant something.

When a wrestler from another promotion would come into the WWF, it was always fun to see how they would be recreated. Big Scott Hall’s reinvention into a Scarface-like, gold chain wearing thug was incredible. I was hooked on his character the second he told a woman who said, “I thought we had something” “No, you had something, chica.”

Hall was treated like a major player right away aligning with Ric Flair and feuding with Macho Man Randy Savage, the Ultimate Warrior and eventually his former AWA tag team champion partner, Mr. Perfect. It’s weird that Flair is the only one still alive now.

From there, he had a terrific feud with Bret Hart for the WWF title before having the Intercontinental title on lock. Feuds with fellow Kliq members Shawn Michaels, 1-2-3 Kid and Diesel/Kevin Nash solidified Hall as a cornerstone of the New Generation era.

I was actually watching the WCW Nitro when Scott Hall came from the stands to crash a random match. When he spoke in full Razor accent, I was so hyped. The next few weeks of Hall and Nash terrorizing WCW was some of the best wrestling entertainment I’ve ever seen. The nWo were the ultimate cool bad guys. The Four Horsemen had their fans, but it was always satisfying watching Flair’s smug face get bloodied by Sting, Dusty, Luger, The Road Warriors, etc.

A lot of the nWo’s coolness came from Hall, who didn’t have to act cool. It just came naturally. One of my all-time favorite moments is when The Outsiders deliver another promo and Hall gets hit by a beer flush on his head. Hall casually wipes it off by slicking back his hair while Eric Bischoff says “And his hair was perfect.” It was awesome.

Scott Hall taking a beverage to the head and just slicking back his hair like the coolest mother fucker of all time pic.twitter.com/Uf7rWsboTV

I suppose the good thing about today is Hall seemed like this moment was going to come years ago.

Fortunately, he fought through and was able to enjoy “bonus years” being appreciated by fans thrilled to see The Bad Guy still with us. The Outsiders were always juggernauts in the March Bashness tournament as everyone appreciated and respected their ability to go all the way.

Here’s some comments from the wrestling community on the loss of Hall:

He wore that shirt every week & had the rest of the nWo(Hulk,Dusty, Macho Man) always shout me out on live TV while I was out with a broken neck. Just one example of what a good friend he was. #RIPScottHall pic.twitter.com/eBCg7FoOH6

I love you Scott!!
I’ll see you down the road…#BuddySystem pic.twitter.com/Qx2he0TetS

My brother has gone on to Valhalla to raise some hell

The bad guy till the end.
“YO Death, what’s your finisher? Can’t wait to kick out”
He may not have kicked out,
but he wasn’t gonna put that MF’er over clean ❤️@realkevinnash love you & miss you more!
God Speed
RIP
Dally pic.twitter.com/EihZrfAWnO

Heart breaking, HUGE loss. He definitely made us all better – helped me with that one-of-a-kind Scott Hall insight. So many “Too Sweet” memories.

Scott – you will be missed. pic.twitter.com/Y2duSyrxlY

For 30+ years Scott was many things to me —mentor, rival, etc; above all he was my friend. I never had a conversation w him that we didn’t either call each other “buddy” or joke about the “buddy system”.

I pray that you are at peace now. 🙏

Scott Hall was a towering figure among his contemporaries – a legend inside and outside the ring.

My deepest condolences to his friends, family and everyone who loved him.#RIPScottHall https://t.co/dDRd88DGjz

This is a very sad day. Scott Hall was one of the greatest wrestlers to compete in any era. When he walked on to Nitro on May 27, 1996 it changed wrestling. “Survey Says: May the Bad Guy Rest In Peace.” pic.twitter.com/YyI2O3BwB5

One of the greatest minds in wrestling history, a one-of-a-kind performer, and a man who left an indelible mark on the business.

Scott, You Had An Incredible Career! As You Know, We All Respected You So Much! Thank You For Our Friendship & For The Greatest Survivor Series I Was Ever In! Rest In Peace! 🙏🏻🙏🏻🙏🏻 pic.twitter.com/25dwdtgObJ

WWE is saddened to learn that two-time WWE Hall of Famer Scott Hall has passed away.

WWE extends its condolences to Hall’s family, friends and fans.https://t.co/Kvyqj16Mcx

IMPACT Wrestling is deeply saddened to learn of the passing of Scott Hall. We send our sincere condolences to his family and friends. pic.twitter.com/Py1JyDDR9J

AEW joins the wrestling world in mourning the passing of a true legend Scott Hall. Our thoughts are with his family, his friends and his fans. pic.twitter.com/orkCBmKcjU

My heart and prayers go out to the family of Scott Hall. He was a great wrestler, a likable guy, and will be missed.

As some of you may remember, I had the pleasure of wrestling my last singles match in WWE against Razor Ramon. pic.twitter.com/Xn0iyXsP0v

My family and I are saddened to hear of the passing of our friend, Scott Hall. I knew him most of my life and he will be very missed. Our prayers go out to his family and friends. #RIPScottHall pic.twitter.com/gBPwUw250T

Saddened to hear about Scott Hall’s passing. The Bad Guy was always great to my brother & I. My thoughts go out to his family & loved ones. #RIPScottHall pic.twitter.com/cOxea6DvWF

Thank you for everything Scott Hall! You will be missed! 💛💜 pic.twitter.com/sgr2rdFJft

We extend our condolences to the family, friends and fans of two-time @WWE Hall Of Famer Scott Hall. pic.twitter.com/oNczleg0uz

Every wrestler from my generation owes a debt of gratitude to Scott Hall. He helped usher in a change that would help the business for wrestlers for the better, not to mention his unrivaled wrestling IQ. RIP bad guy, and thank you for all you gave to our industry. Godspeed. 😞

Without Scott Hall and his influence in professional wrestling, this podcast would not exist.

That's just one tiny piece of the incredible legacy Scott left behind after his years of hard work and dedication to the industry.#RIPScottHall. You'll be badly missed. pic.twitter.com/e0BgZcMCeP

SCOTT HALL BUBBA. THE RAZOR RAMON. YOU ARE THE REAL OF REAL BUBBA. YOU MAKE IT TO THE HALL OF FAME YOU ARE THE IRON SHEIK CLASS FOREVER. I LOVE YOU BUBBA pic.twitter.com/MtbZaa2Qqk

In ‘89 I spent 5 weeks in Germany with Scott Hall.We got https://t.co/MdtZiywC24’91 I was on a try out for 1 day for WCW in the UK and,although he would never admit it,got me kept on the 5 day https://t.co/hkV2qYfTxg deepest condolence to Scotts https://t.co/rlDYlkMbNs well pal.

Sad to hear the passing of Scott Hall. I remember when Curt Hennig, asked if I could get Scott booked in @WWE. After an introduction to @VinceMcMahon “Razor” was created & the rest is History. “Hey Yo” I Guess God Needed a Good, “Bad Guy” R.I.P. My Friend🙏🏻

If Scott Hall (& Kevin Nash) never made decisions they made the biz would never have changed. If there was no nWo they would be no bWo. They made the business better for everyone. I'm forever grateful for Scott's kindness to me. Rest In Peace Scott and most importantly thank you. pic.twitter.com/ONW5xWHEbv

So many prayers for Scott Hall and his family right now. The wrestling community is a very strong family and near or far, we have each others backs. Times like these are never easy but I do know there are so many incredible people waiting for you on the other side, ‘Bad Guy.’ 💜 pic.twitter.com/KGTpWR44BR