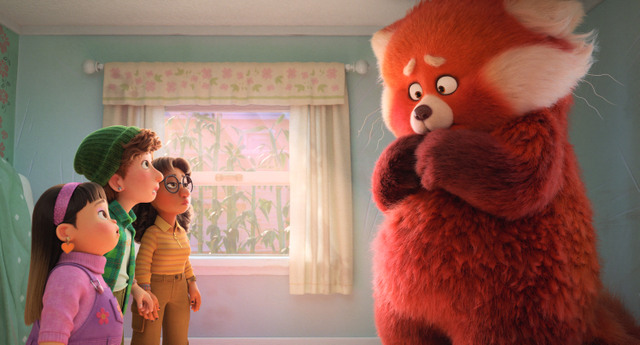 It’s not really a question if Turning Red is a great Pixar movie. It’s more of where it ranks among Pixar’s best. On the first of what will likely be several viewings, I’m confident in saying Turning Red isn’t looking up at too many films.

This is the movie Pixar execs hoped Brave would be. Both films feature a young girl dealing with an overprotective to the point of being overbearing mother. That’s where the similarities end as Turning Red mines huge laughs, emotional beats and beautiful visuals to create an easy early contender for Best Film of 2022.

Meilin (Rosalie Chiang) has just turned 13 and is all set to be a woman. While an overachieving straight A-student, Meilin has a healthy school/life balance…or so she thinks. 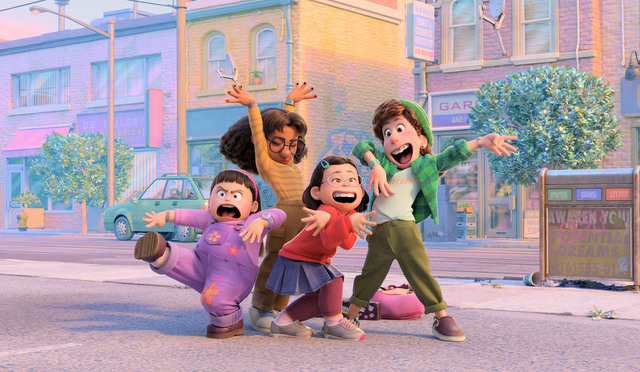 Director/co-screenwriter Domee Shi (2019 Oscar winner for Best Animated Short Bao) was part of the animation department for the Pixar classic Inside Out. It’s probably not a coincidence that Meilin’s pals have the same unforgettable presence as the Inside Out characters.

Shi and co-writer Julia Cho (Fringe) set the film in 2002. It’s an ideal time period for the peak of the boy band craze and just before the breakthrough of modern technology. And basing the film in Toronto was a fun different locale allowing for a strong mix of diverse characters.

What Ming doesn’t know about her perfect daughter is that Meilin is starting to get some serious emotions about boys. This leads to an amazingly embarrassing scene where Ming completely humiliates Meilin in front of her crush as well as obnoxious classmate Tyler (Tristan Allerick Chen, WandaVision). 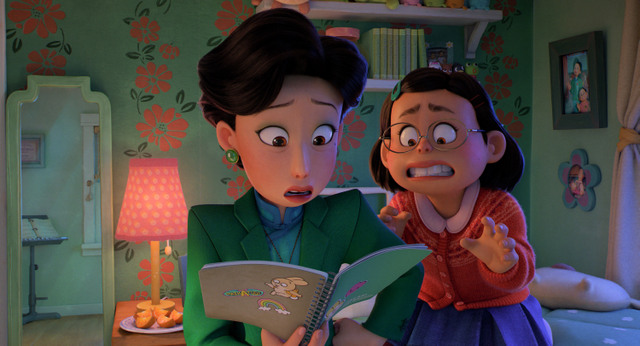 While this would go viral if the film were set in modern times, the scope of the embarrassment with flip phones is only so widespread. Meilin is so overwrought with emotion that she can’t properly process them. Things get weirder the next day when she awakens and shockingly finds herself transformed into a large fluffy red panda.

There’s a very funny scene where Ming assumes Meilin’s panda transformation is the beginning of her getting her first period. Ming’s overreaction is hilarious and the metaphor of a big red monster destroying everything during that time of the month was exceptionally delivered.

After some major hijinks and a few more embarrassing moments, Meilin learns just like Bruce Banner, she can control her inner beast. All it takes is getting a handle of her emotions with a little help from her friends. And with this newfound control, maybe Meilin can use her Panda Power as a means to catch 4*Town in concert…provided Ming doesn’t find out about it.

What’s special about Turning Red is how it can just be enjoyed on a basic surface level, but there’s deeper generational levels to the script as well.

Shi and Cho tackle the evolving challenge of a teenage girl and mother trying to adjust to the new dynamic. There’s the natural divide when a teen wants to be around their friends more than their parents. Healthy friendships are a major part of the film as it offers a positive example of how unconditional love plays out. And it doesn’t hurt that Meilin’s crew more than holds their end on the comedy front.

Another key topic is navigating parental expectation with a teen discovering their identity on their own. Breaking the myth of the need to be perfect is also crucial as well as generational curses. That plays out when Ming’s mother (Wai Ching, Daredevil) and sisters come to help Meilin break her panda curse.

For an animated film, Turning Red has so many teaching and discussion points that it seems poised to be an enduring favorite for many years to come. 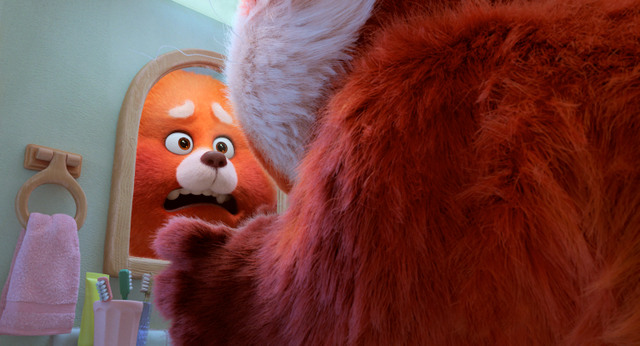 As usual for a Pixar film, the animation is gorgeous. Meilin’s panda fur looks soft enough to want to touch the screen. Lighting effects are stellar. Check out the reflections of buildings along car windshields or the spotlights at the Toronto Skydome.

It’s immensely refreshing to see more animated films like Soul, Encanto and Turning Red reflecting different cultures in an authentic manner. This has been a very positive trend in the last few years and hopefully these films are the start of a new norm. Children and families need to see other cultures beyond their own on the big and small screen.

Turning Red was a real treat and feels like the kind of animated film that will hold up just fine on repeated viewings. Make sure to stick around through the credits for a fun extra scene.

Check out the Pixar Short Films Collection Vol. 3 including Bao on Blu Ray on Amazon.