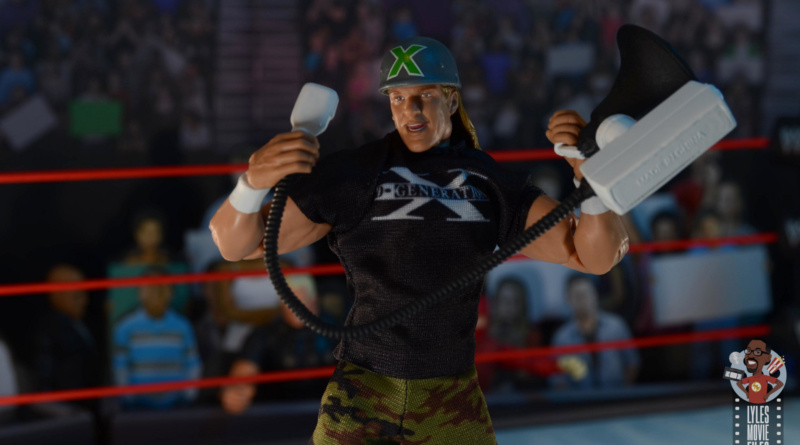 The DX Invasion of WCW becomes a bigger fish the more WWE tells it. It was a cute moment, but hardly the Monday Night War altering event WWE “historians” suggest. It was another concerted effort by the WWF to push Triple H as the leader of this second iteration of Degeneration X and he shined in this spotlight.

Mattel is taking a fun approach in bringing one of the more memorable scenes of the Monday Night Wars era. Legends 13 continues the four-wave stretch of getting all of DX in Invasion gear. This is my preferred method of completing a faction short of releasing them all in one wave. Triple H was the ringleader of DX so it makes sense to get him earlier.

We’ve gotten several figures of DX Triple H so let’s see if this one is worth adding to the collection. Otherwise I might have two words for this figure…

Packaging:  The Legends line is my favorite of the WWE package set ups thanks to the gold, brown and yellow color combination. The iconic portrait of the character also adds a nice, classy presentation.

It’s still a little goofy that the DX logo is the spray-painted version used for the late 2000s reunion with just Triple H and Shawn Michaels. The side and rear portrait of Triple H looks great perfectly capturing how he looked in 98/99. 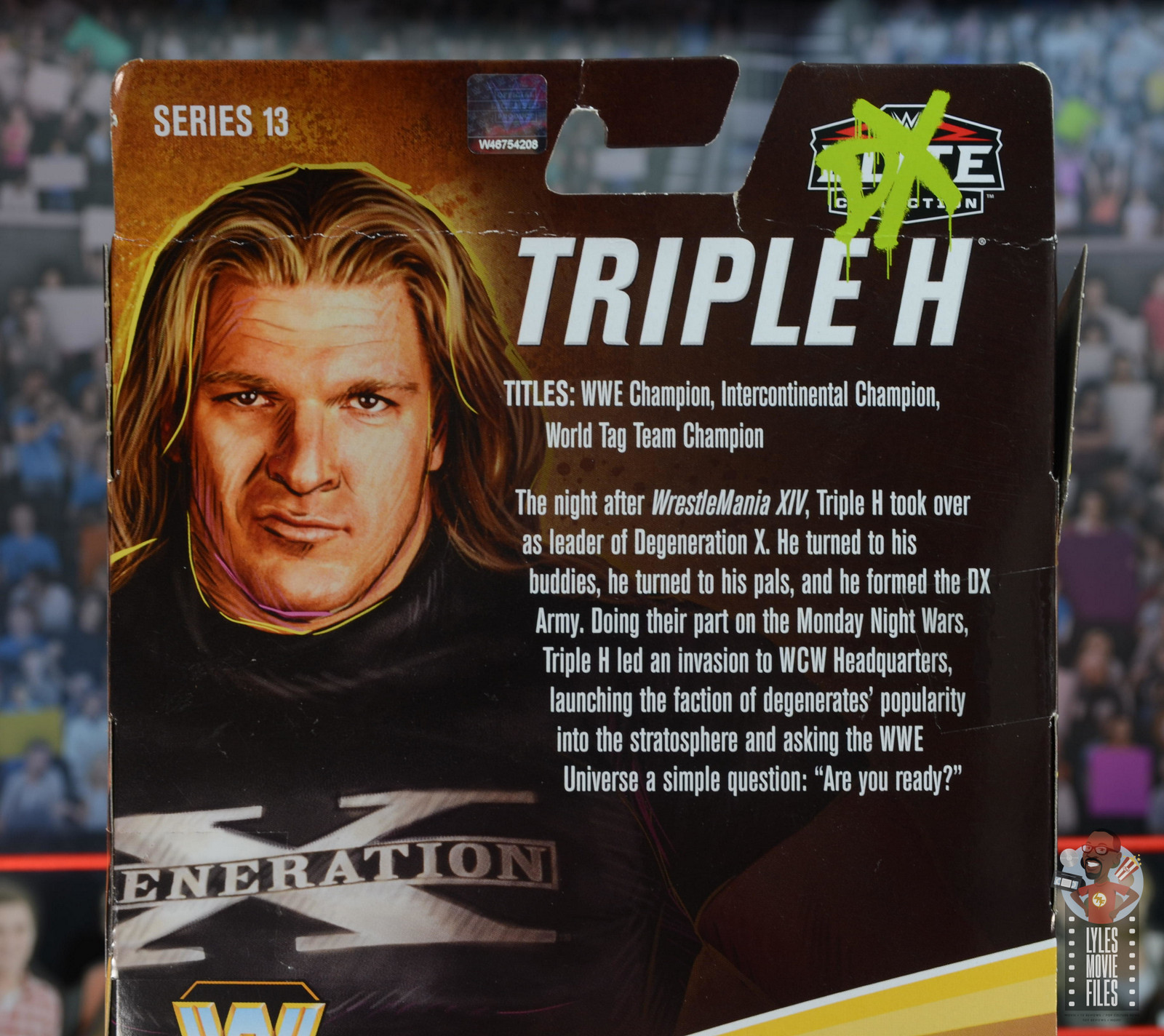 The bio is a masterclass in figure package copywriting. Roger Rudman sets the stage so well it feels like reliving wrestling history.

Likeness:  I skipped the last Flashback Triple H because the head sculpt just felt like a step back compared to superior likenesses of other characters we’ve gotten lately. Well, that and the fact this version was coming out relatively soon enough. 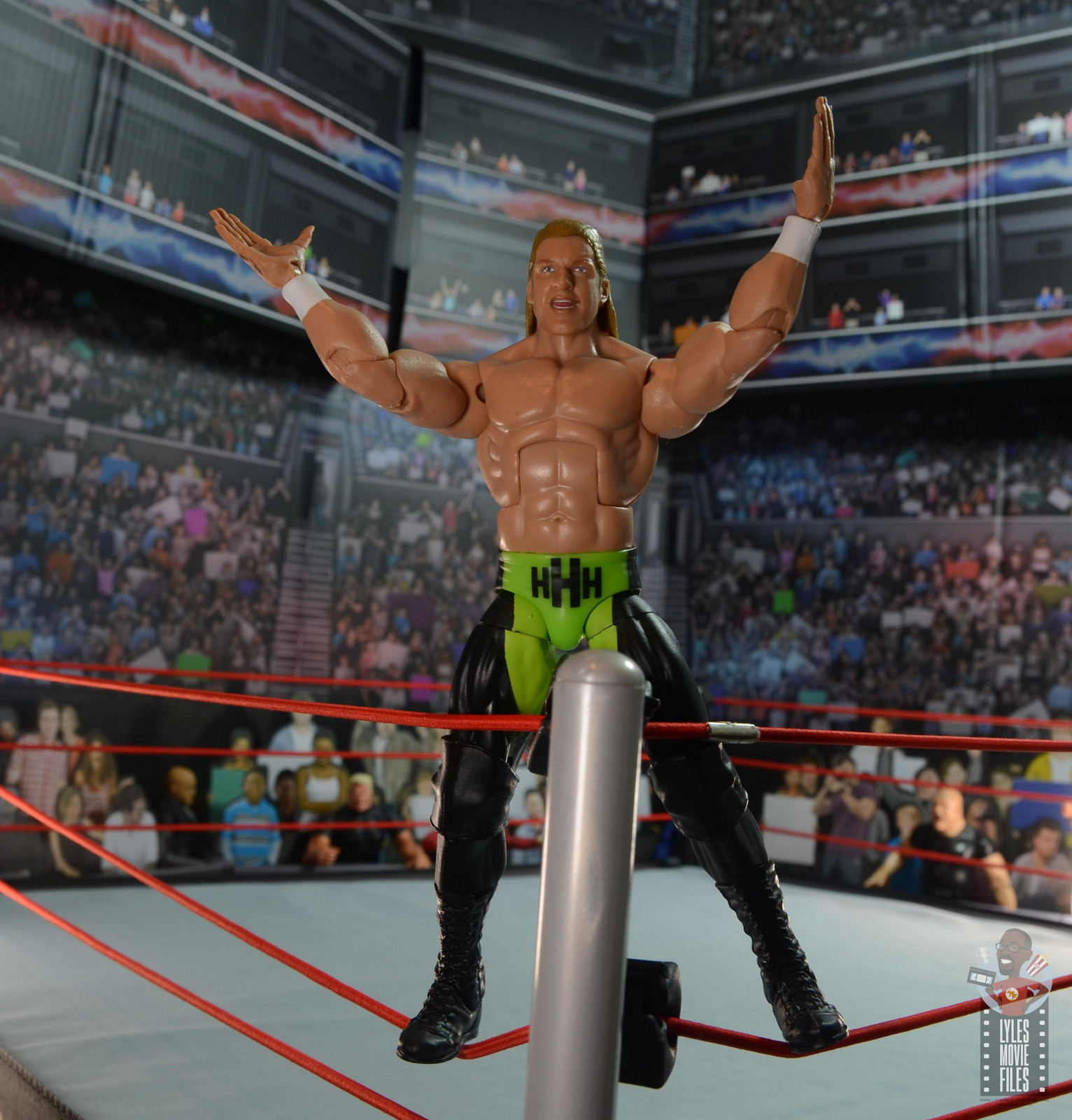 This True FX scan is a big improvement capturing the youthful Triple H appearance much more convincingly. He’s got a bit of helmet hair to appropriately fit the helmet. 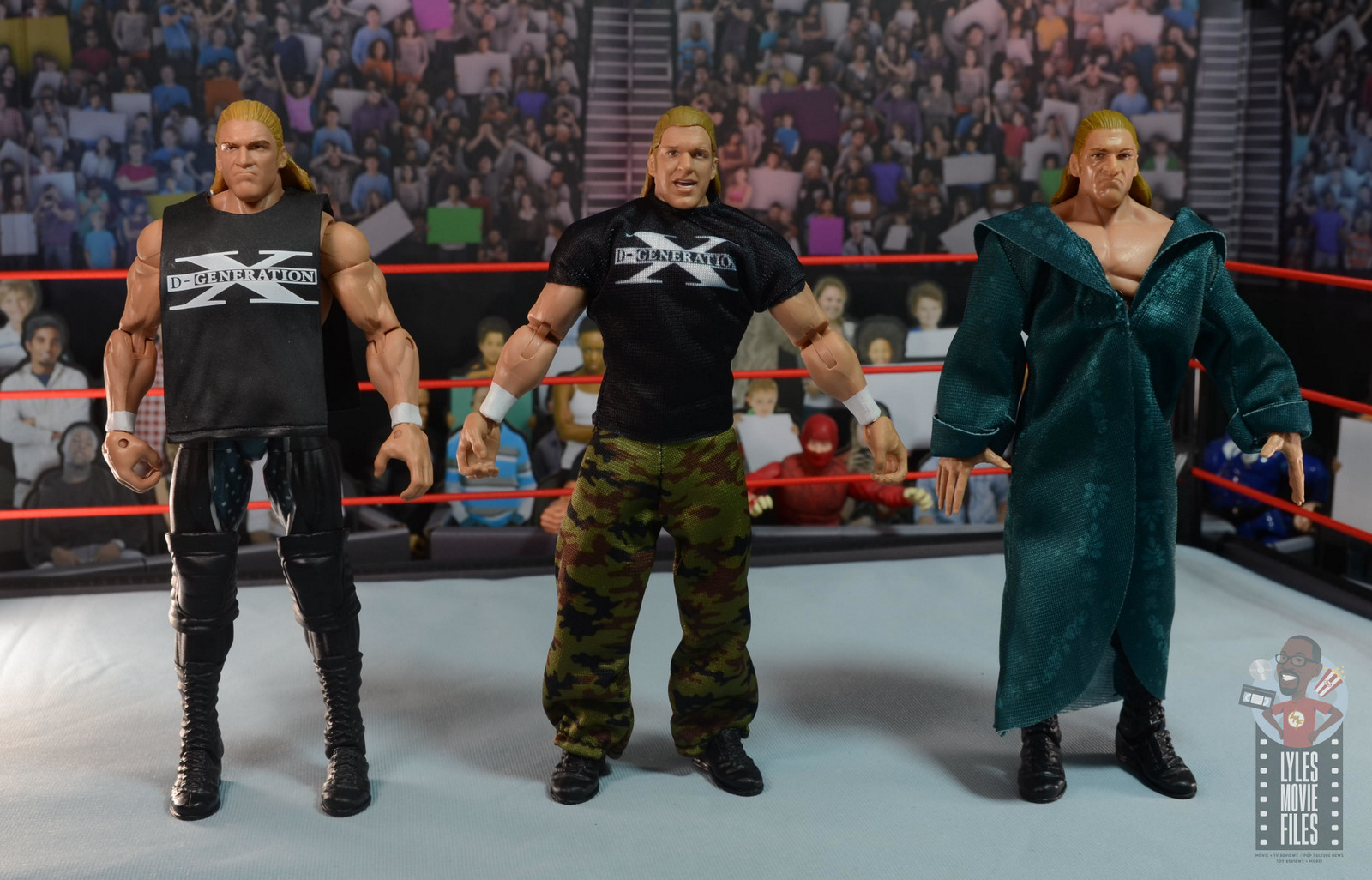 This creates a bit of a dilemma as Triple H is known for his lush, flowing hair during that era. The focus on this figure is the Invasion attire so I’m not knocking off points for the hair sculpt. 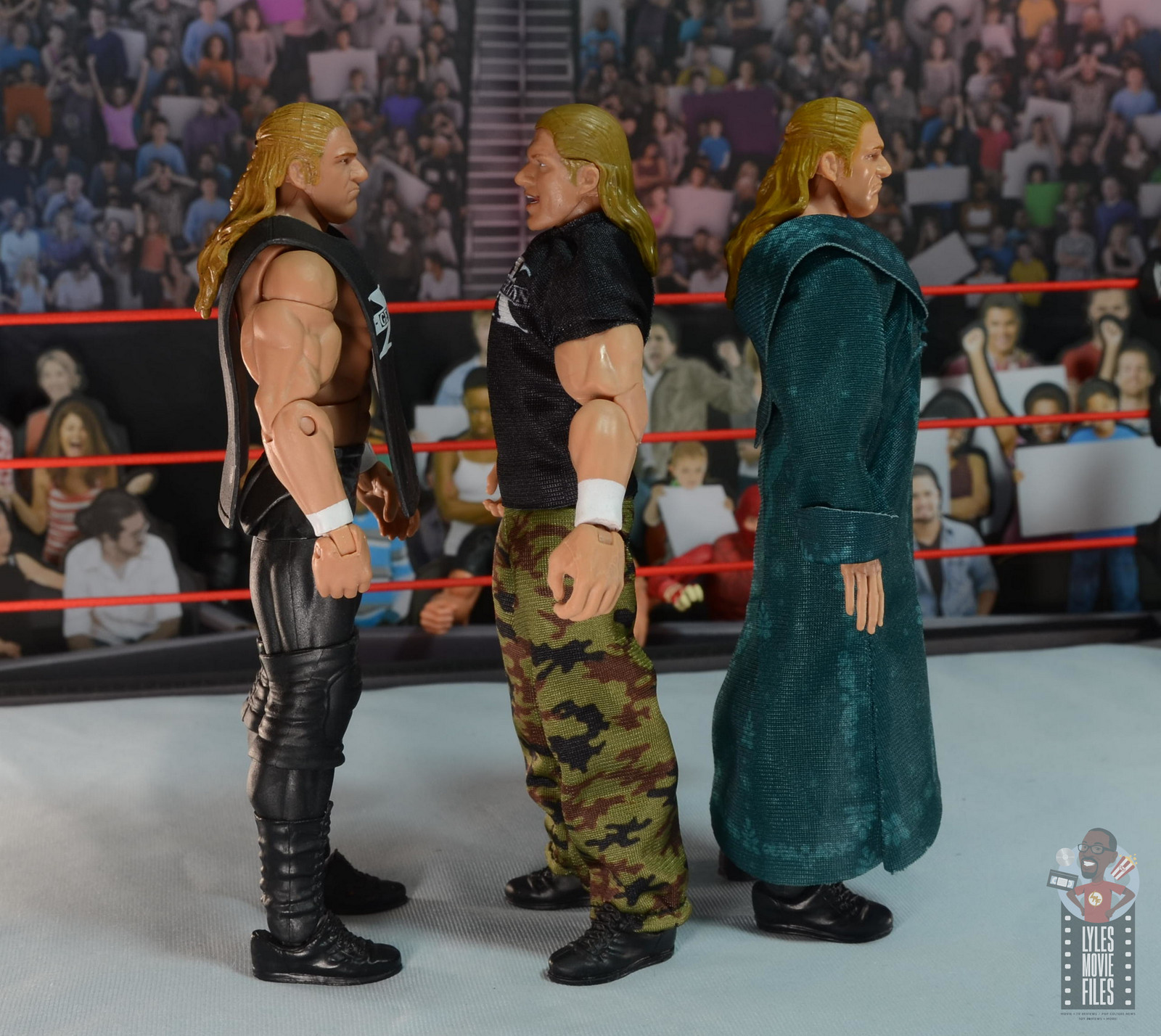 Mattel probably should have gone with the beefier British Bulldog torso for Triple H. The slender one makes him look too lean. He hadn’t reached jacked up Game status yet, but he was broader than this figure suggests. His arms are bigger making the torso look even smaller in comparison. 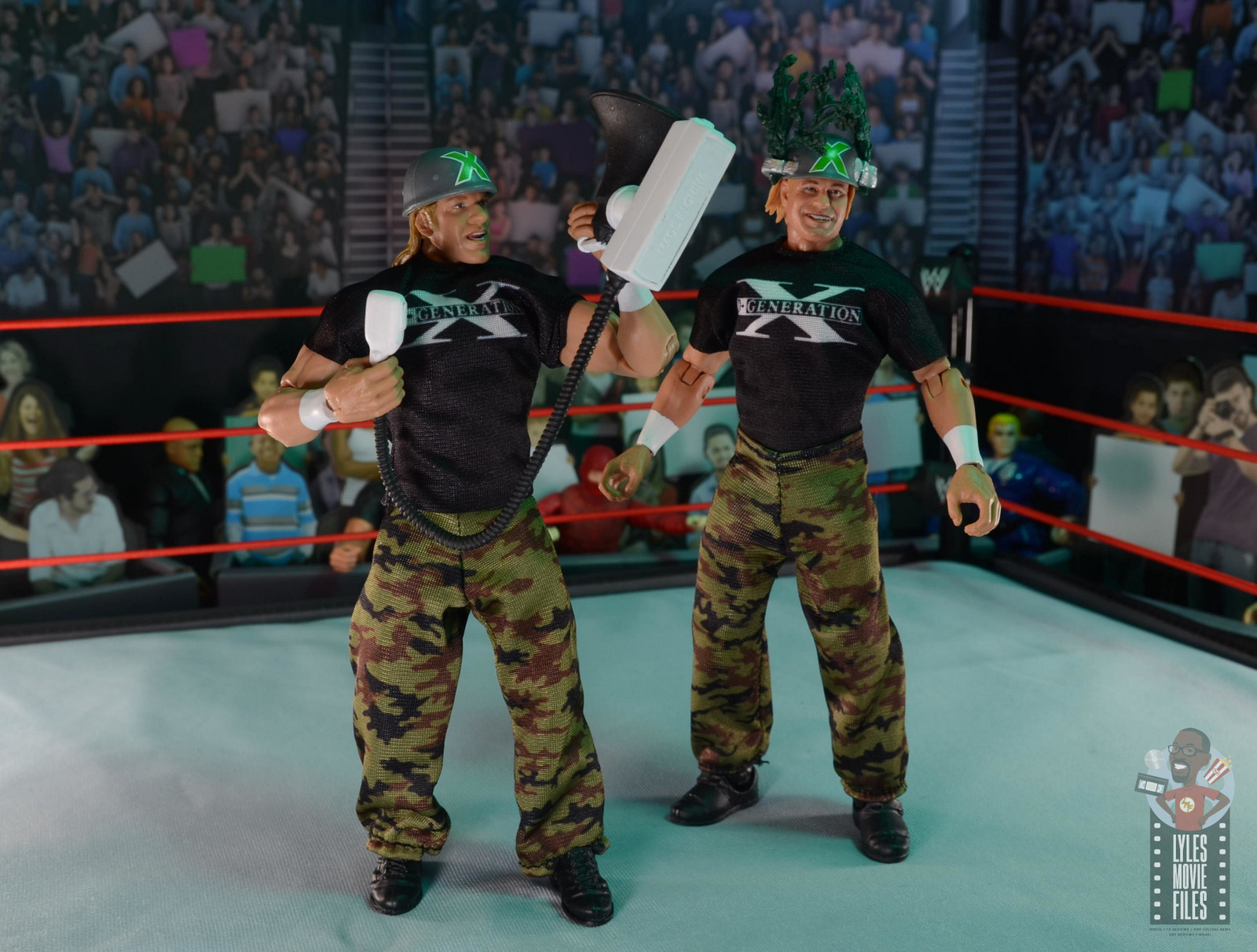 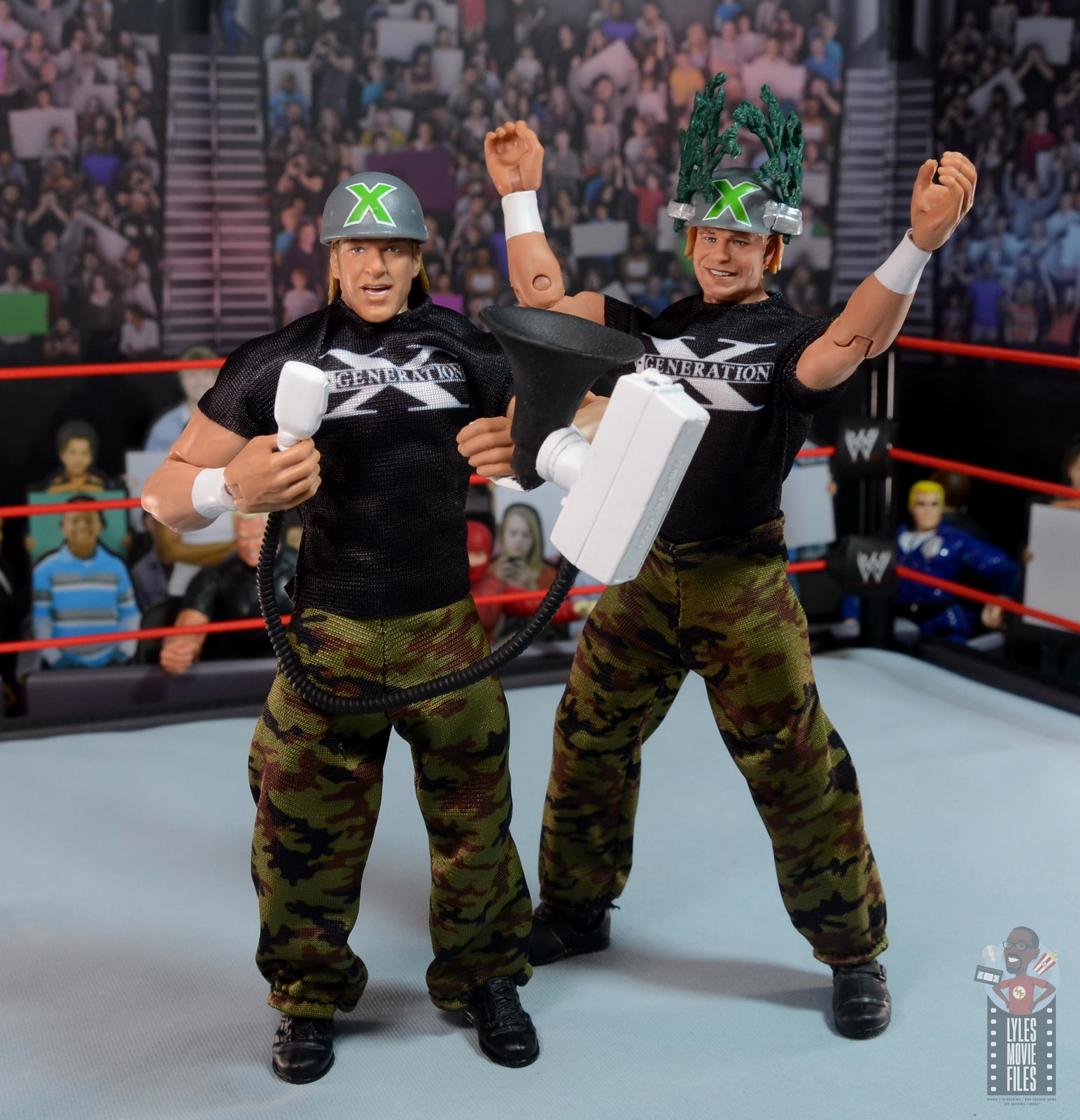 Paint: Triple H was actually big on his colors during this stage of his career. He rarely wore the same attire on back to back episodes of RAW. I like the neon green choice since this is more of the base DX colors.

This was the attire Triple H wore during a pivotal battle in the DX vs. The Corporation war with the first DX defector to join The Rock and company. Ah, the Attitude Era was full of wild plot twists.

Mattel frequently has trouble with lighter colors, but got the right hue for these tights. The three Hs are the right size and the paint applications are clean. 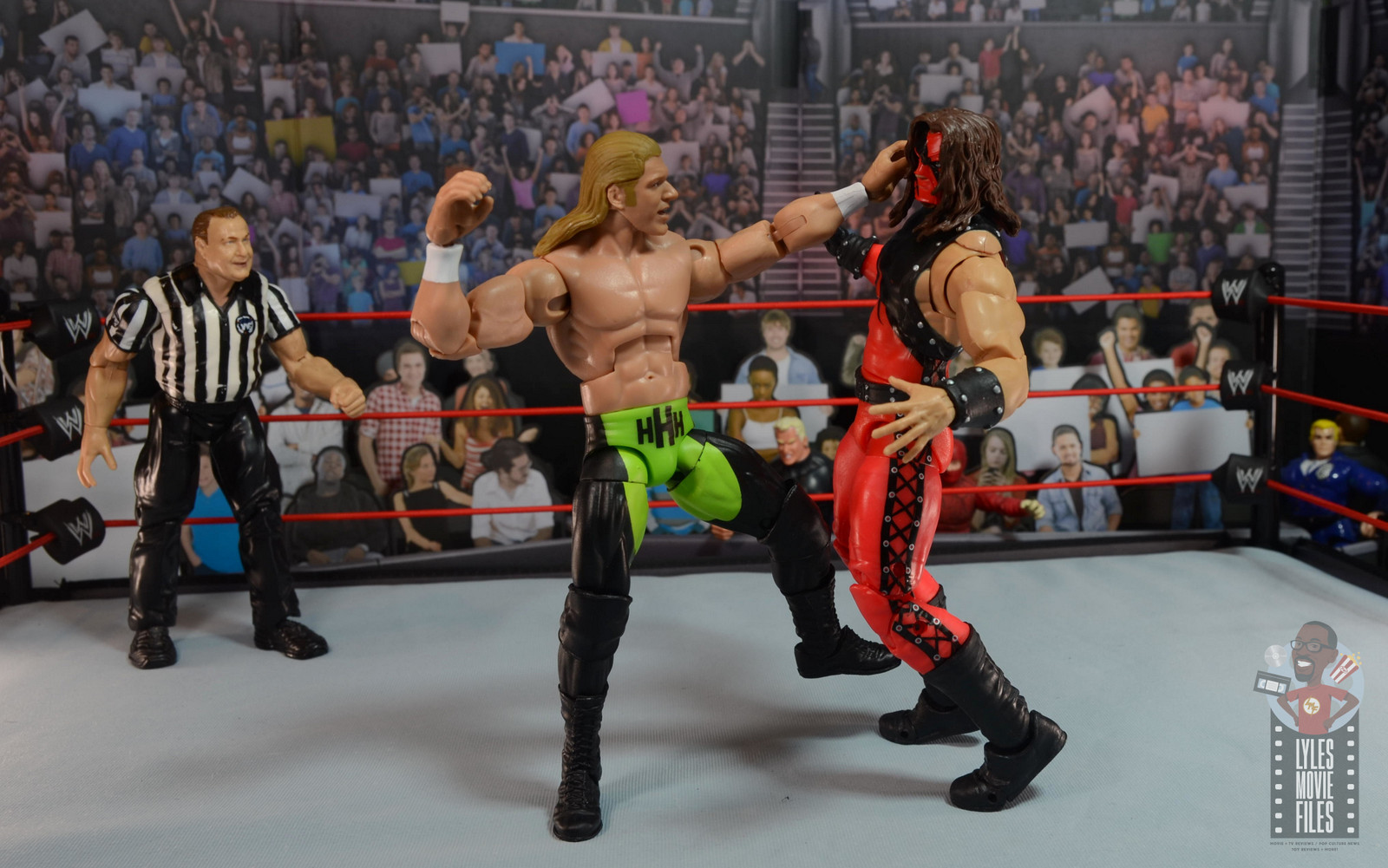 Articulation:  Legends Series 13 is the first one to feature the double-jointed elbows. That’s definitely enough to sell me on getting this version of Triple H despite a decent Attitude Era collection of the future Game in his DX run. 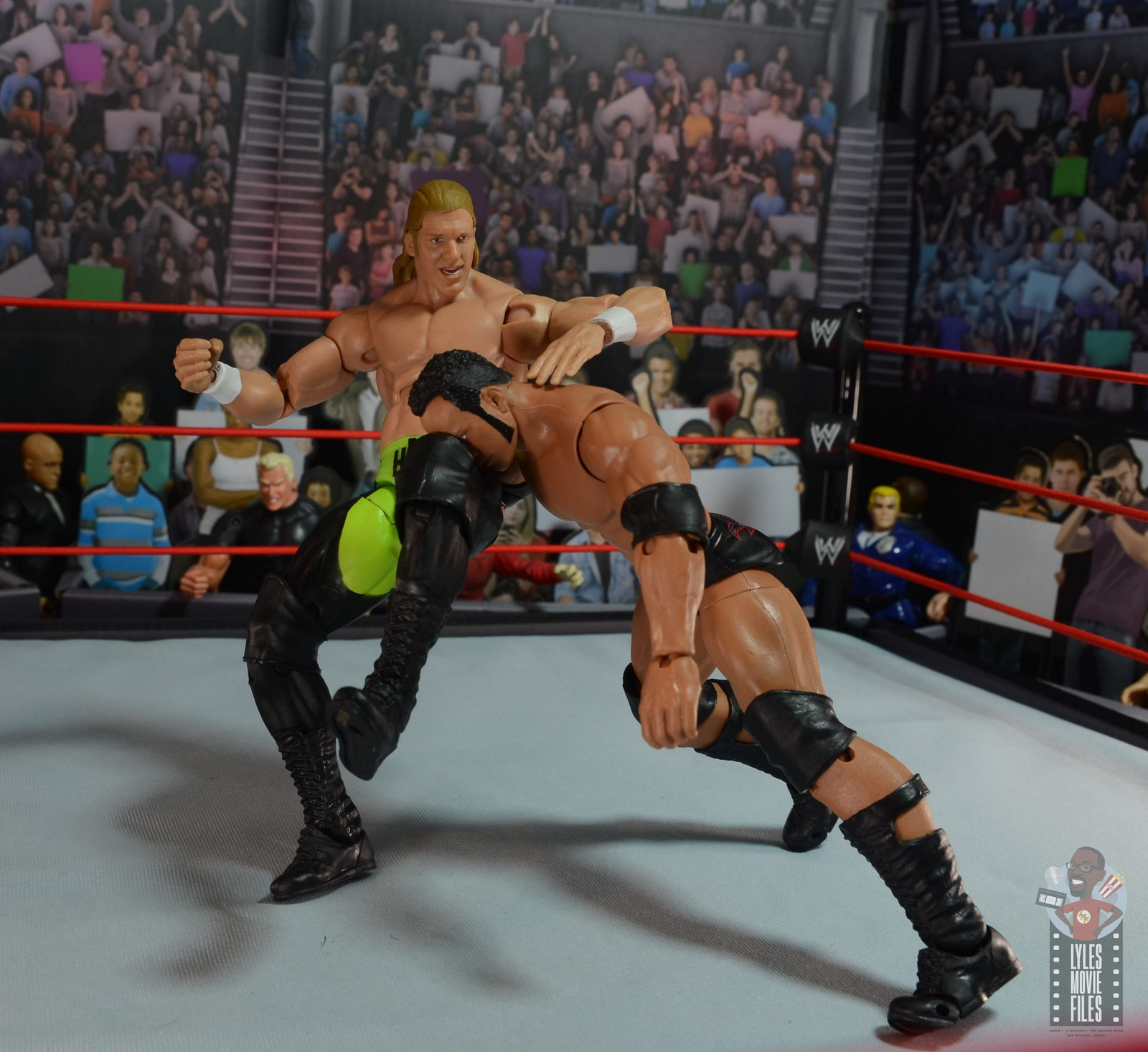 Triple H is definitely one of the figures that benefits from the double-jointed elbows as they make for better pedigrees. They also aid in his other signature moves so it’s a big win for Elite Triple H collectors. 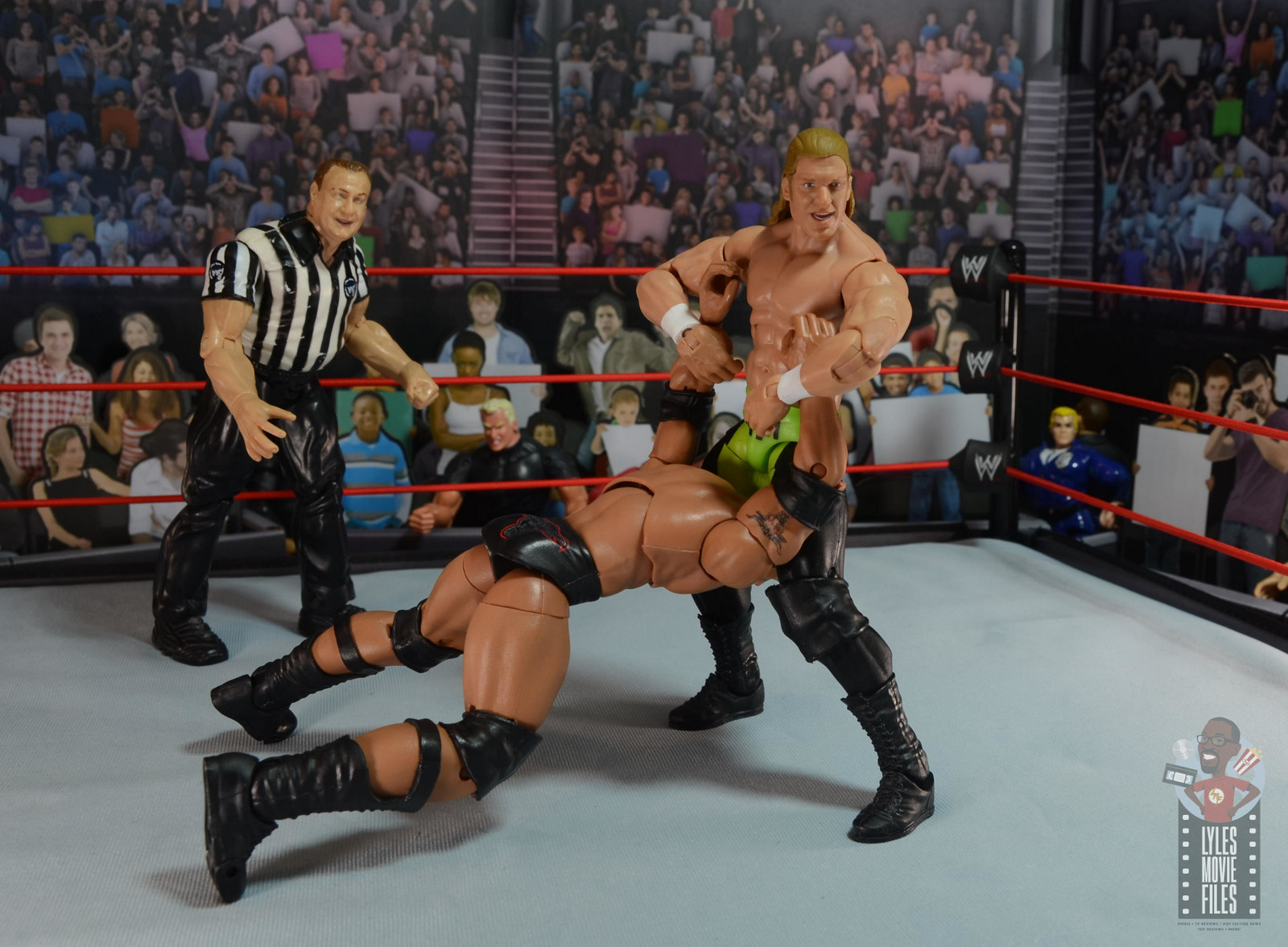 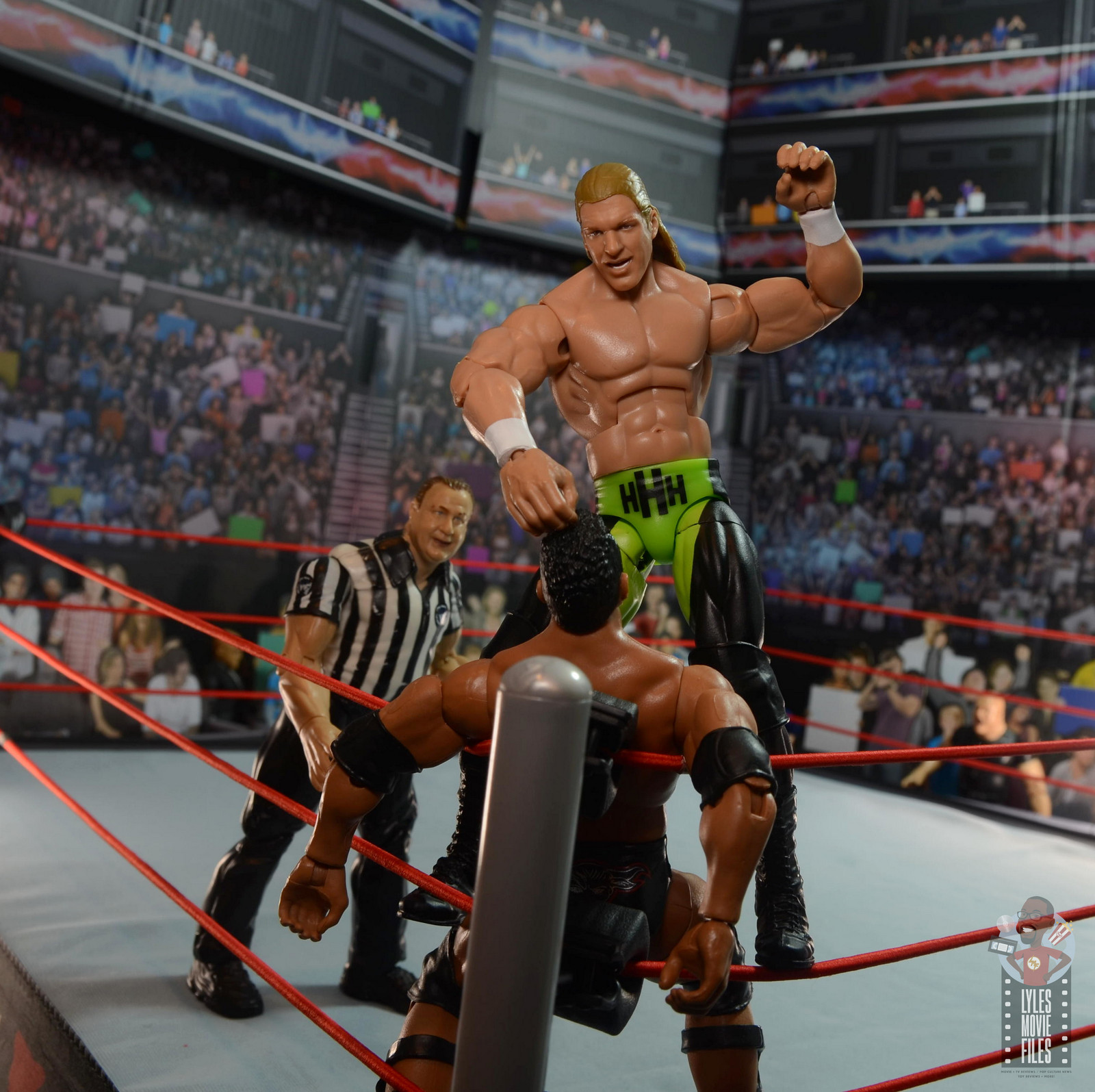 Accessories: The big draw with this series of DX figures is being able to re-enact their attire from the DX Invasion of WCW. 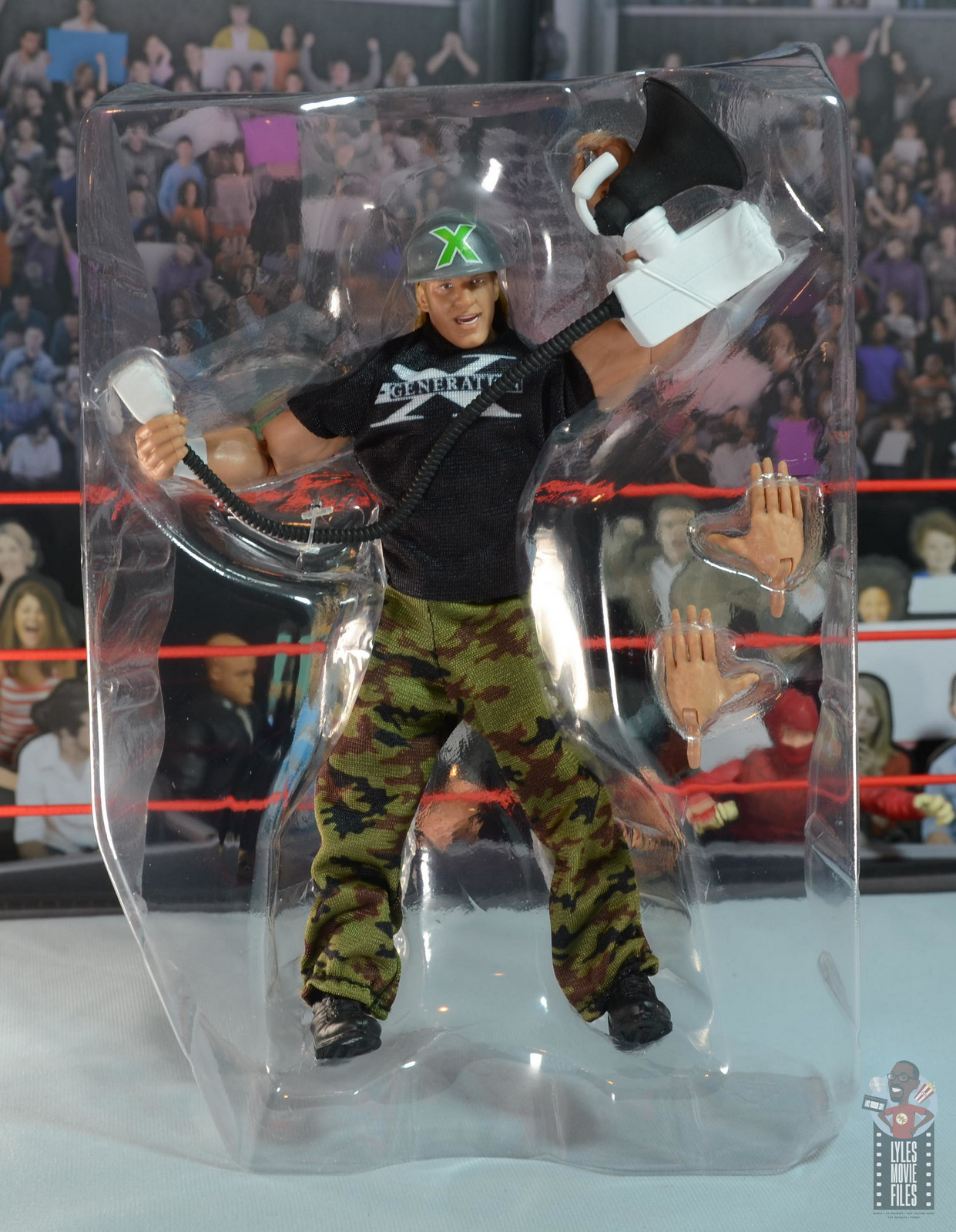 HHH’s got the helmet with a big X. The helmet is a solid likeness for what Triple H wore for the invasion. Triple H also has his megaphone, which also seems like an exact replica of the one used.

Like the Legends 12 Billy Gunn, Triple H gets the cloth Degeneration X shirt with no Velcro making for a snug fit. Additionally, he’s got the camouflage pants, which thankfully are fit to scale so they’re not riding up on his ankles.

Finally, he’s got a pair of swappable hands to helpfully provide information as to where “suck it” was directed. 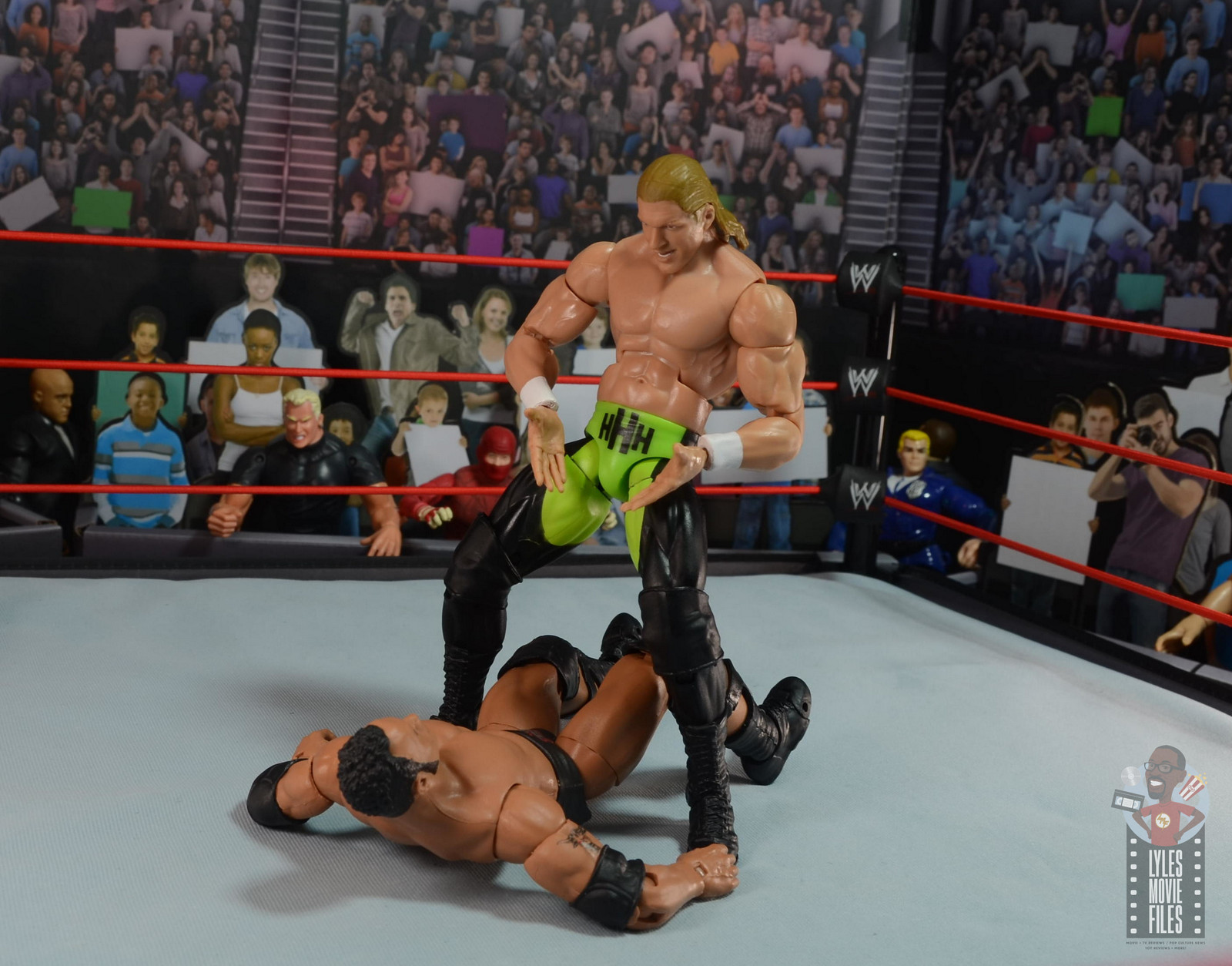 Worth it?  Triple H was $21.99, but I deliberately held out for another Target sale so I got him as part of a spend $50 get $10 off sale making him the price of older figures. With this two in one option, Triple H is arguably a better value even at the new price point. 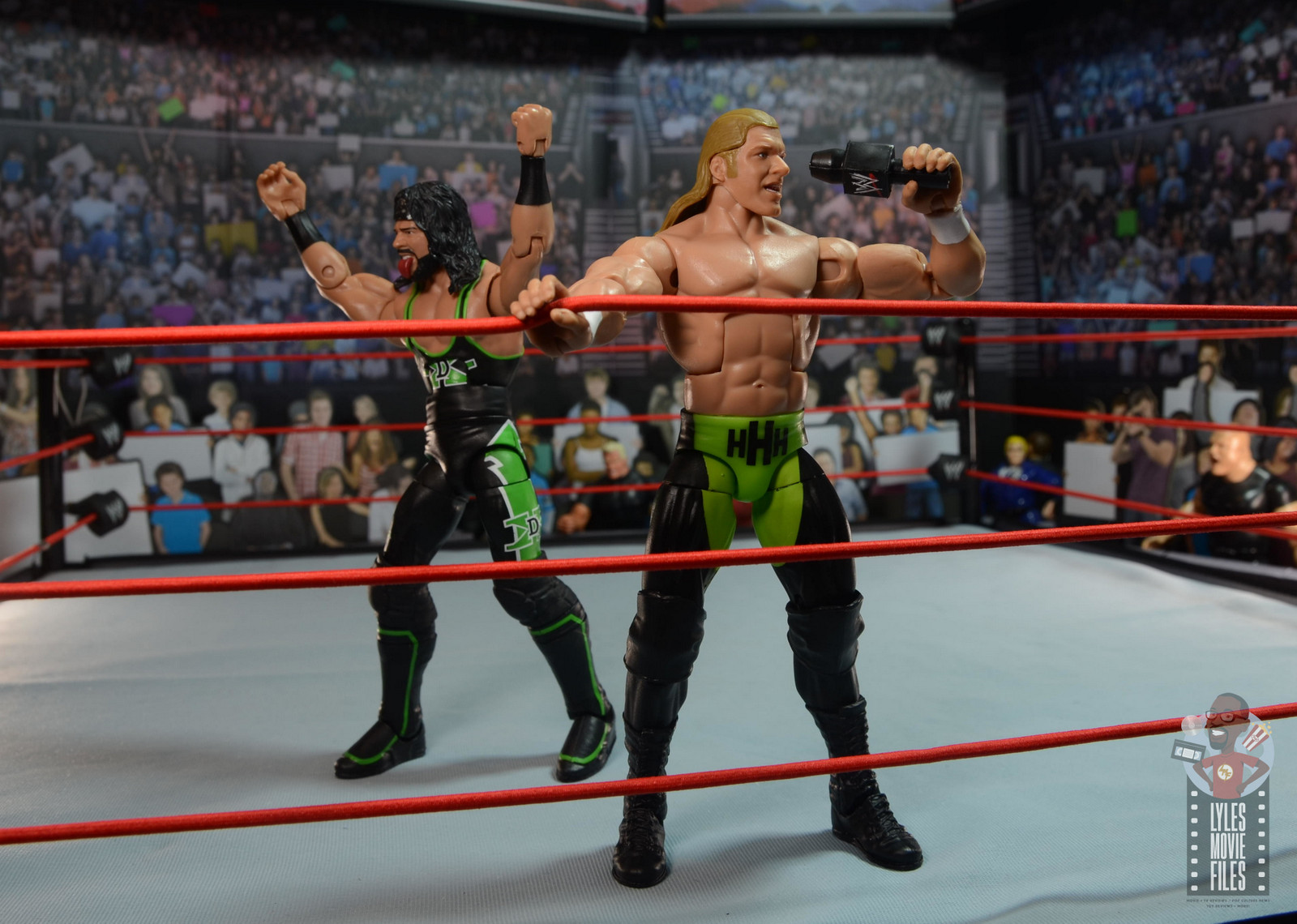 I was surprised how much I liked this Triple H figure. Stacking the DX Army look also made this one a nice two in one figure. I’m 2/5 of the way now and looking forward to getting Chyna and Road Dogg. 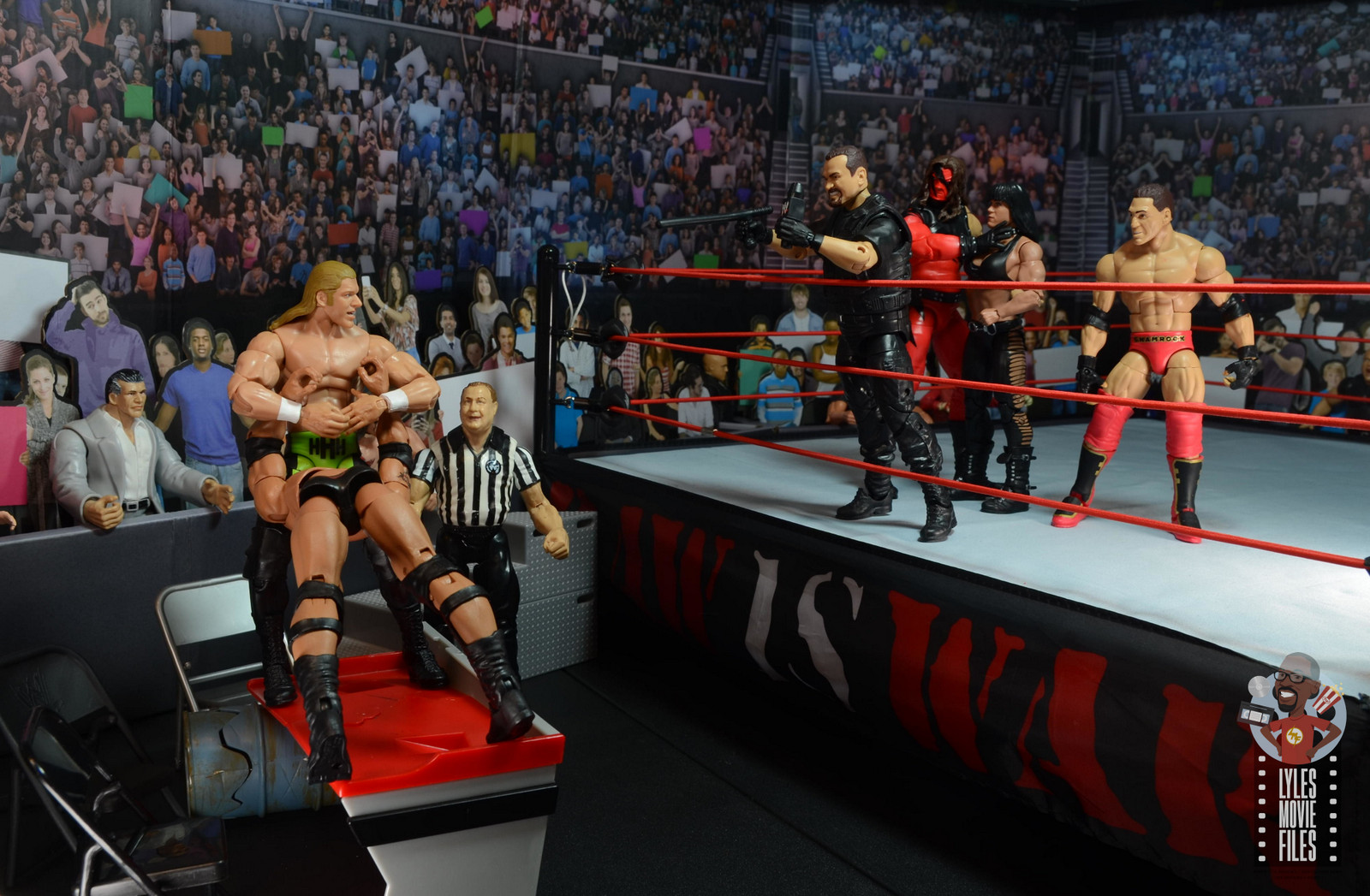 Where to get it?  The WWE Legends line is exclusive to Target. Just in time for WWE Legends 14, the supply of Legends 13 is starting to dry up at Target. He’s still available on Target’s website