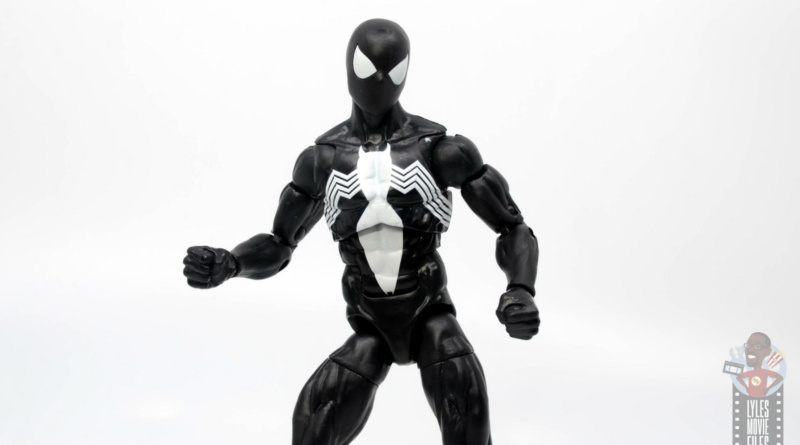 From the second the updated Marvel Legends red and blue classic Spider-Man figure debuted, a countdown started. This was a counter for how long it would take Hasbro to revisit this mold in the Symbiote Spider-Man outfit. Surprisingly, it took nearly two years as I reviewed the just about definitive classic way back in 2020.  Wild.

Now the time has come to see if this will be the end-all, be-all Symbiote figure. With rising prices and again the calculated use of the Retro card presentation to avoid including a Build-A-Figure, Hasbro probably needs to nail it. Asking customers to pay for a $30 upgrade in another four to five years probably wouldn’t trigger much goodwill.

Packaging:  The Spider-Man retro wave packaging is a callback to the old school Toy Biz figures with artwork and bold color scheme reminiscent of the FOX cartoon series.

It’s got a colorful setup with the yellow and red show logo against a purple backdrop and a showcase image of Spider-Man to the left. The back features the rest of the wave, the special feature (i.e., additional accessories) and a bio. 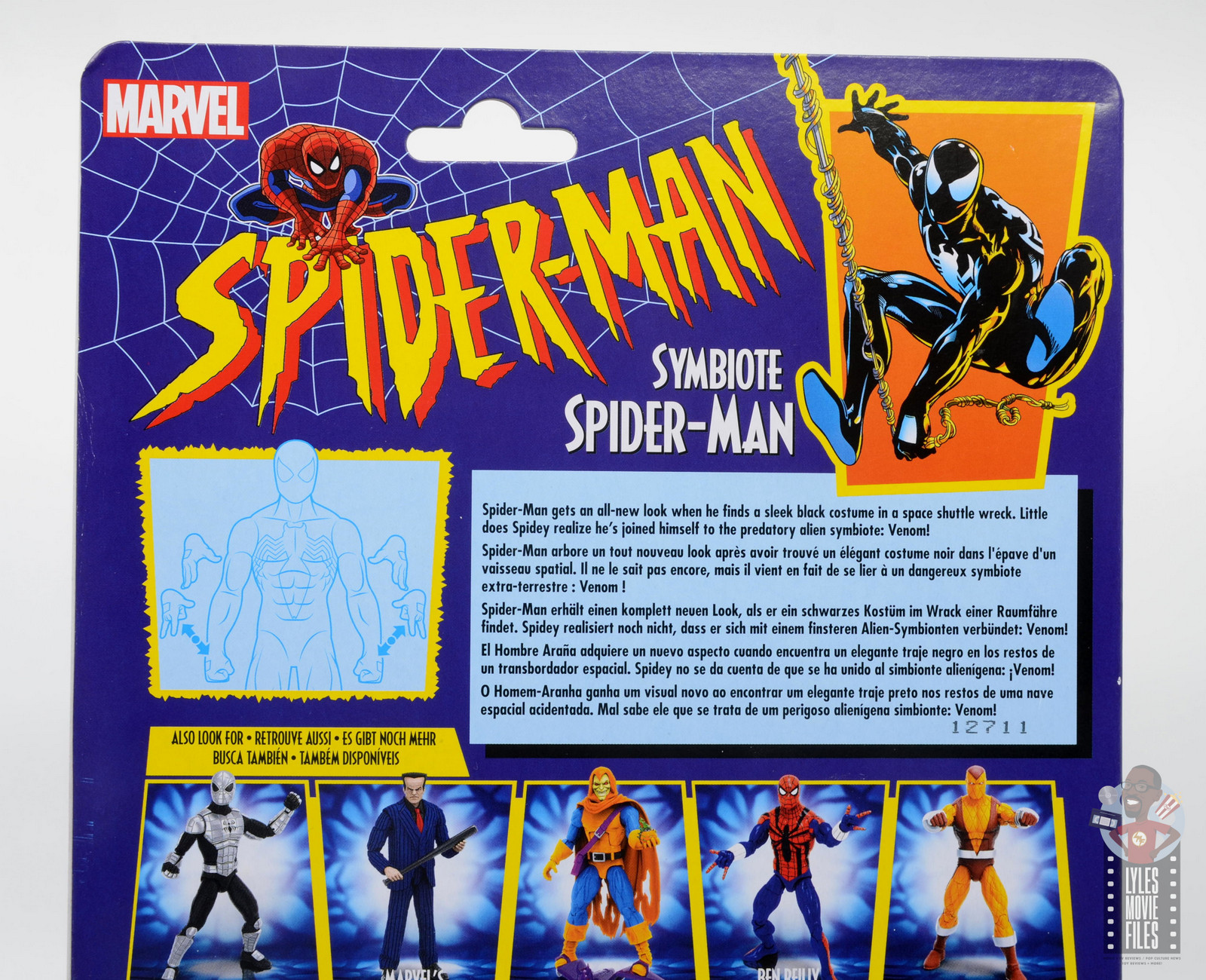 In this case the bio is based on how Spider-Man got the symbiote in the cartoon, not the comic accurate origin.

Likeness:  If you got the red and blue figure (as you should since it’s a fantastic figure) you know what you’re getting here. No scrawny high school Peter and more of the 1970s era Ross Andru style with muscles and definition. 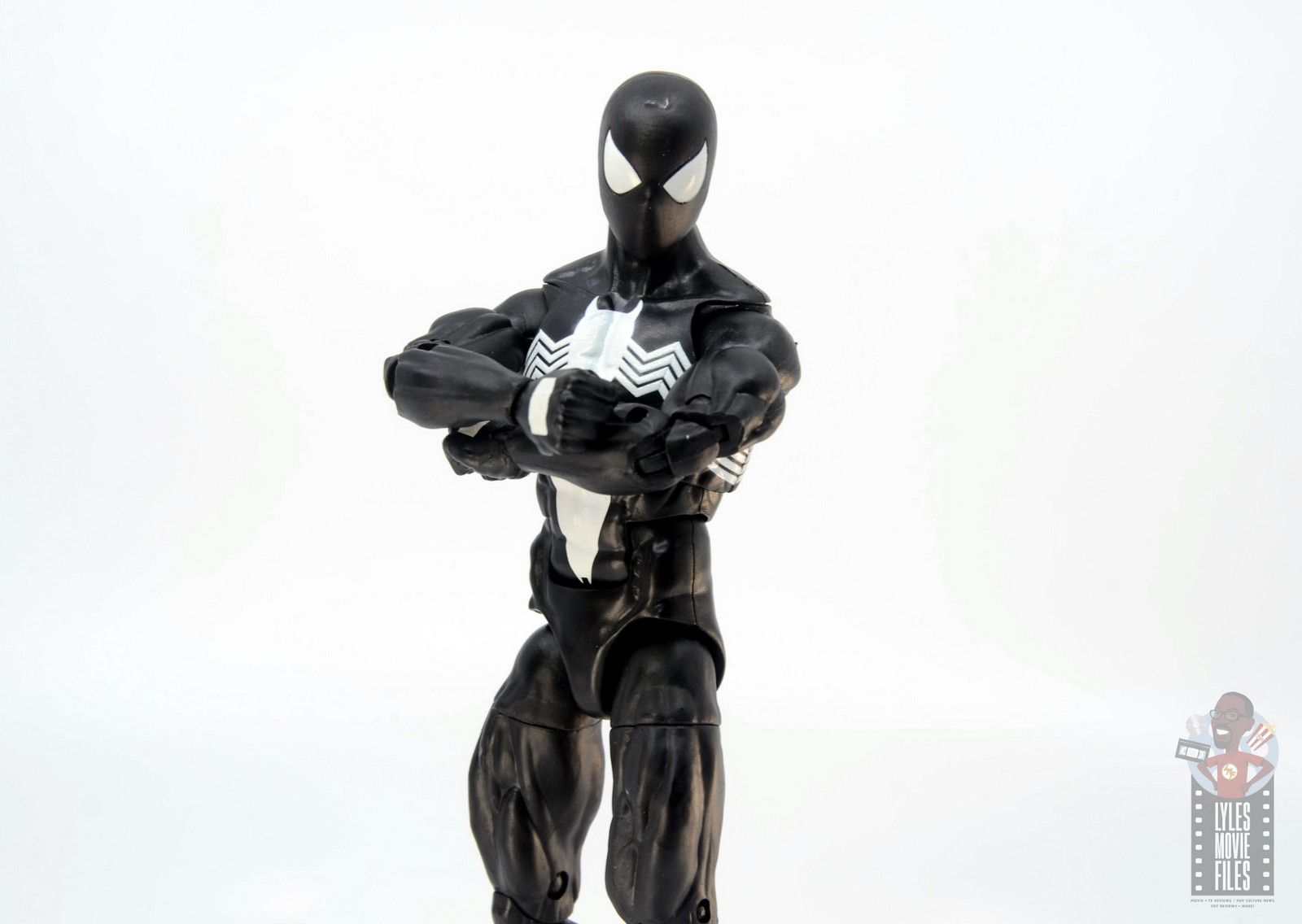 It’s a great mold for Spider-Man and one probably worth revisiting — with a few adjustments — for Daredevil. 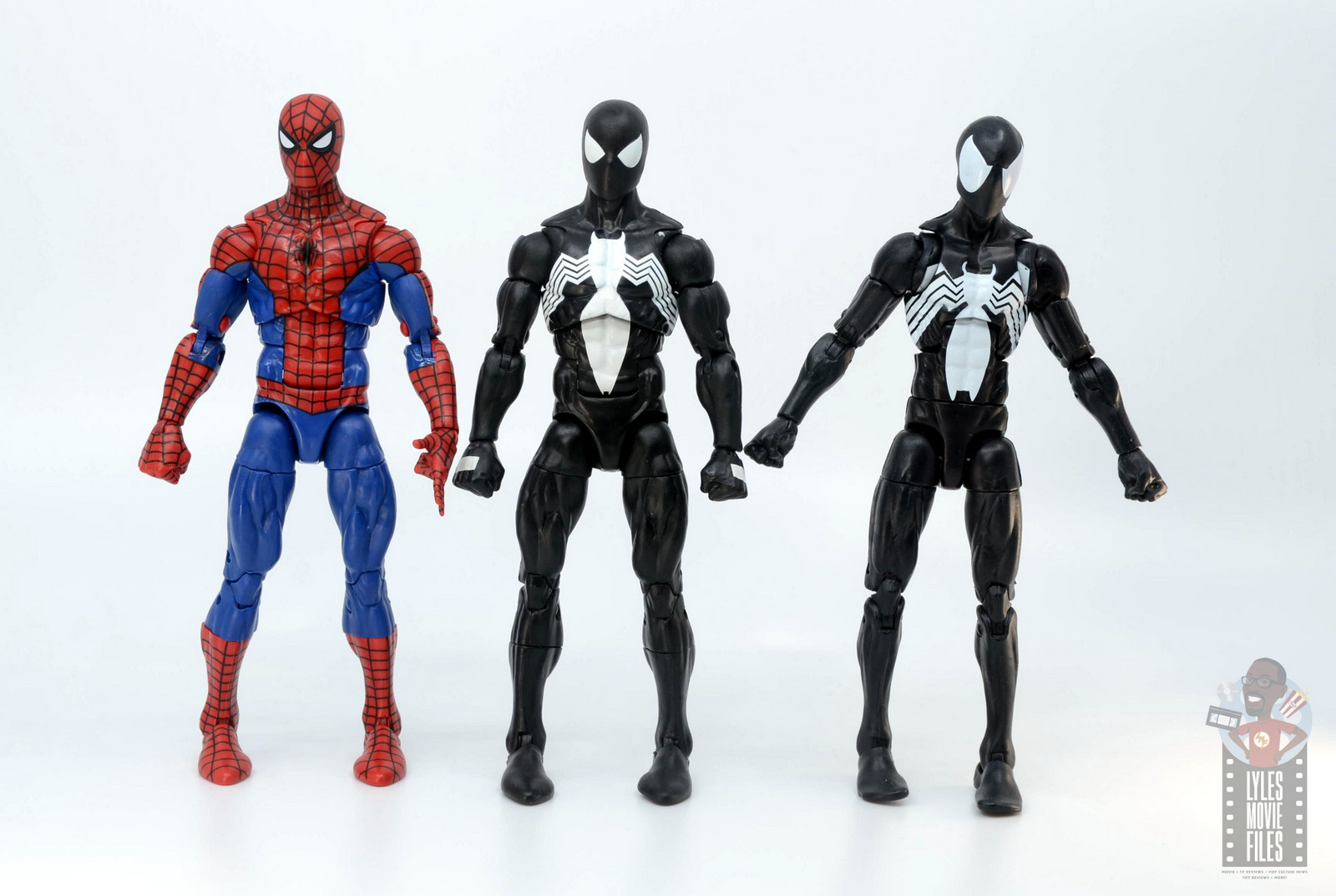 The flow of this sculpt is impressive as everything is sleek and streamlined. There’s no big shoulders or weird hips to navigate. My figure has a weird mold line/dent in the head, which is a little distracting. 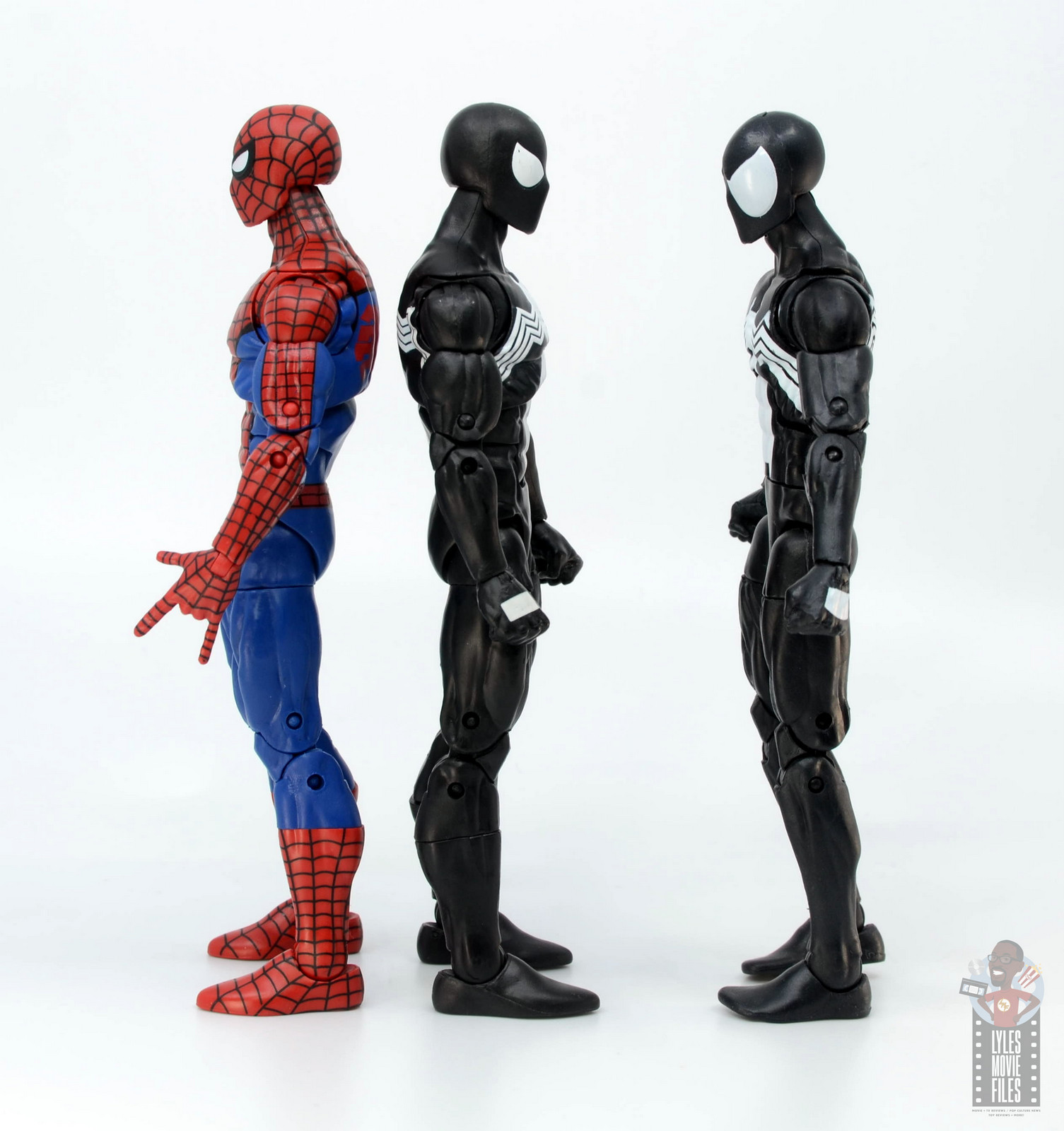 Paint:  In every case with a figure using yellow or white getting the ideal paintjob is going to be a little tricky. Thankfully, I was able to choose between a few symbiote figures on the shelf.

The one I grabbed had a crisp paintwork with the spider logo with no obvious bleed through of the black.

As usual, Hasbro went with a shiny, glossy white paint to make for a stronger contrast against the black. 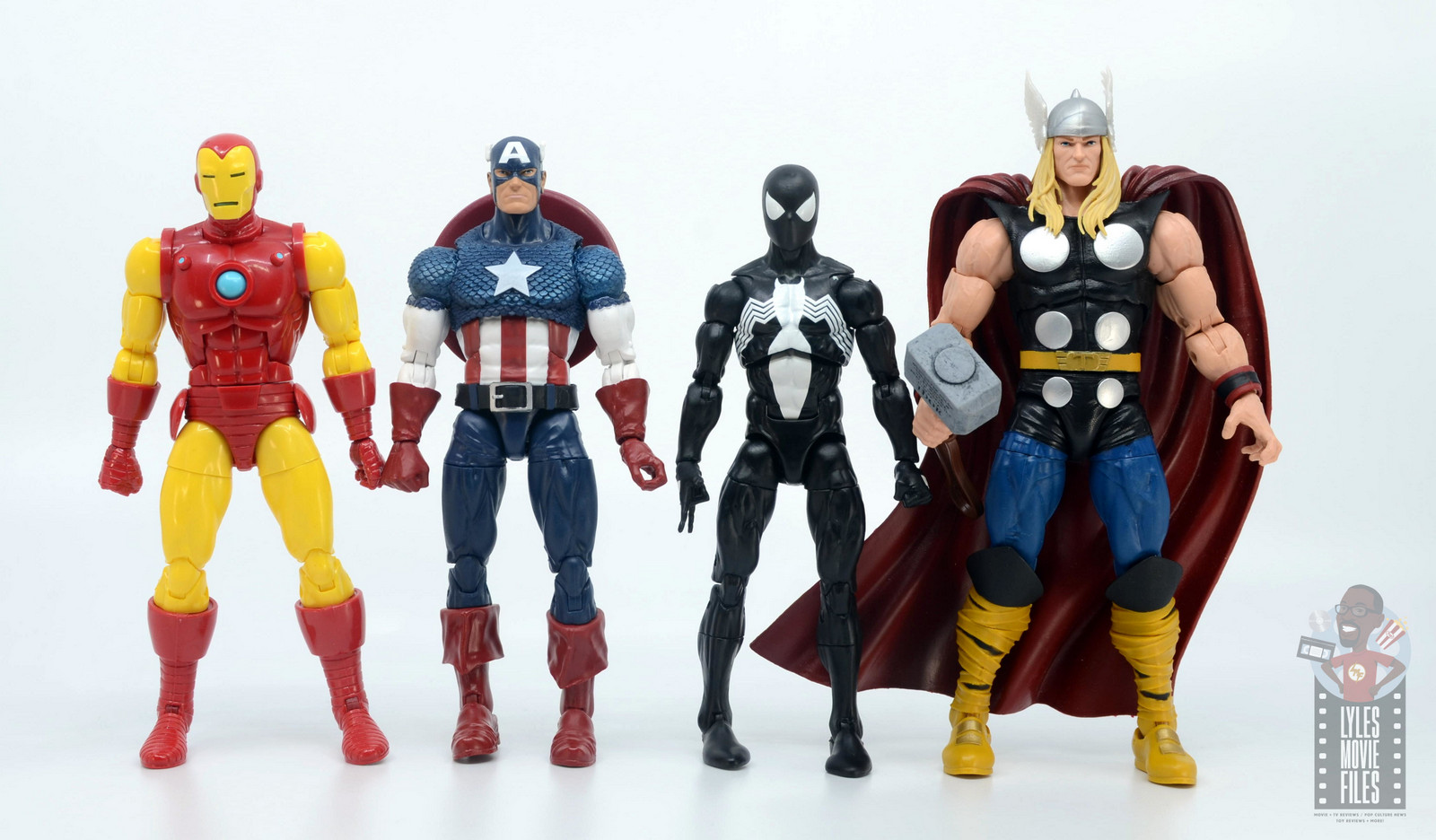 Scale:  Hasbro didn’t make the mistake of sizing Spider-Man up so he still fits in height wise with previous Spider-Man figures. And he’s not suddenly towering over Captain America or Iron Man. 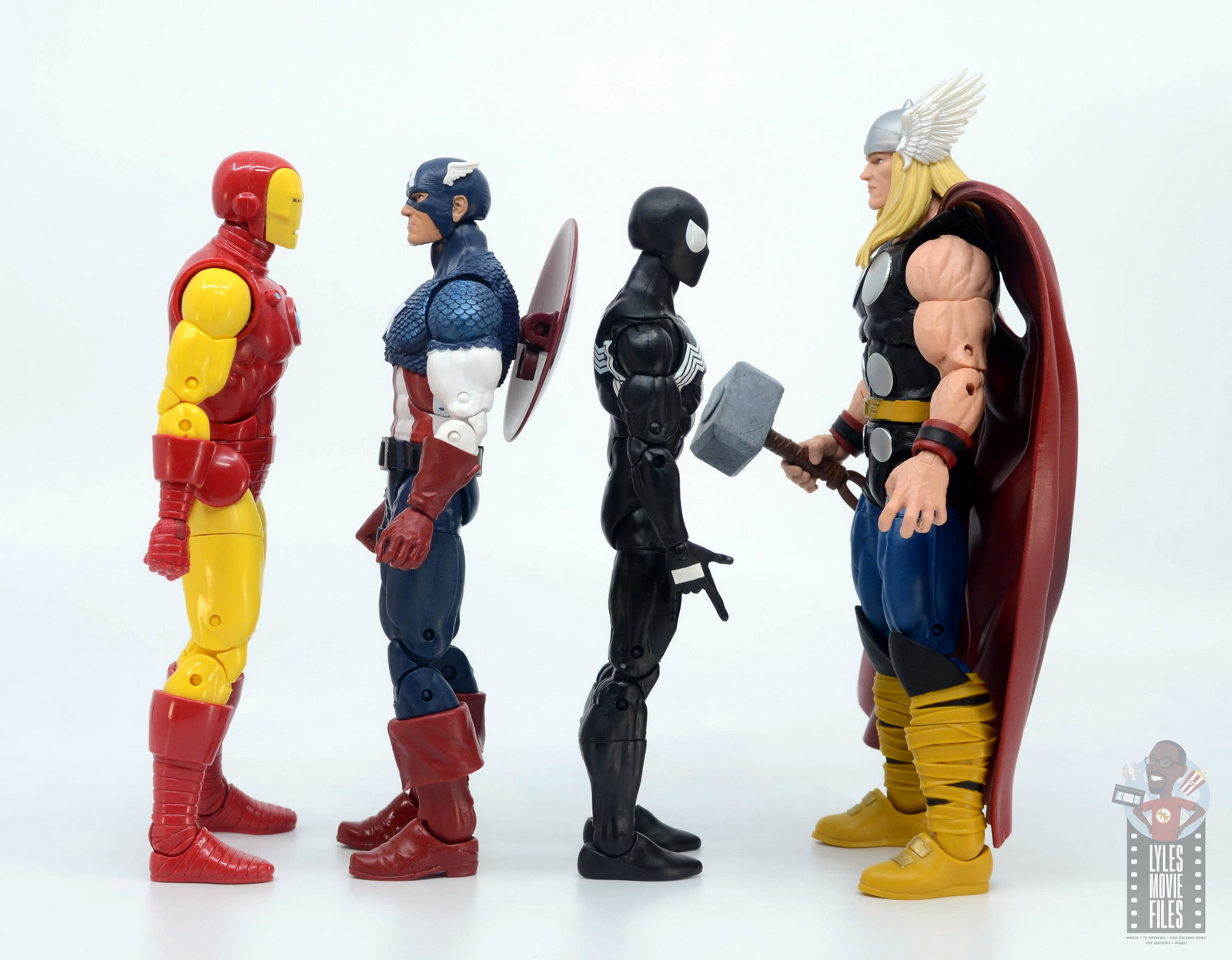 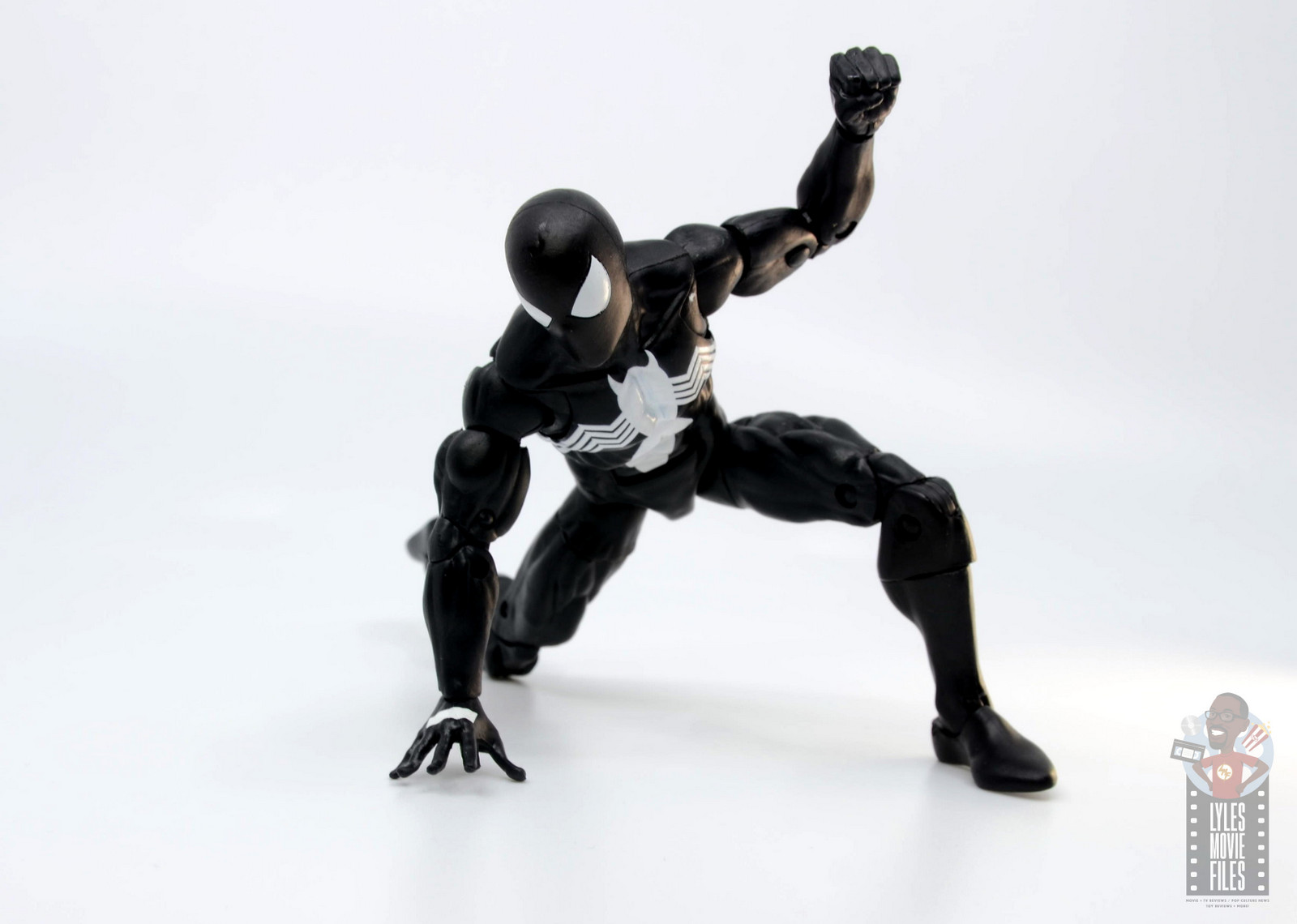 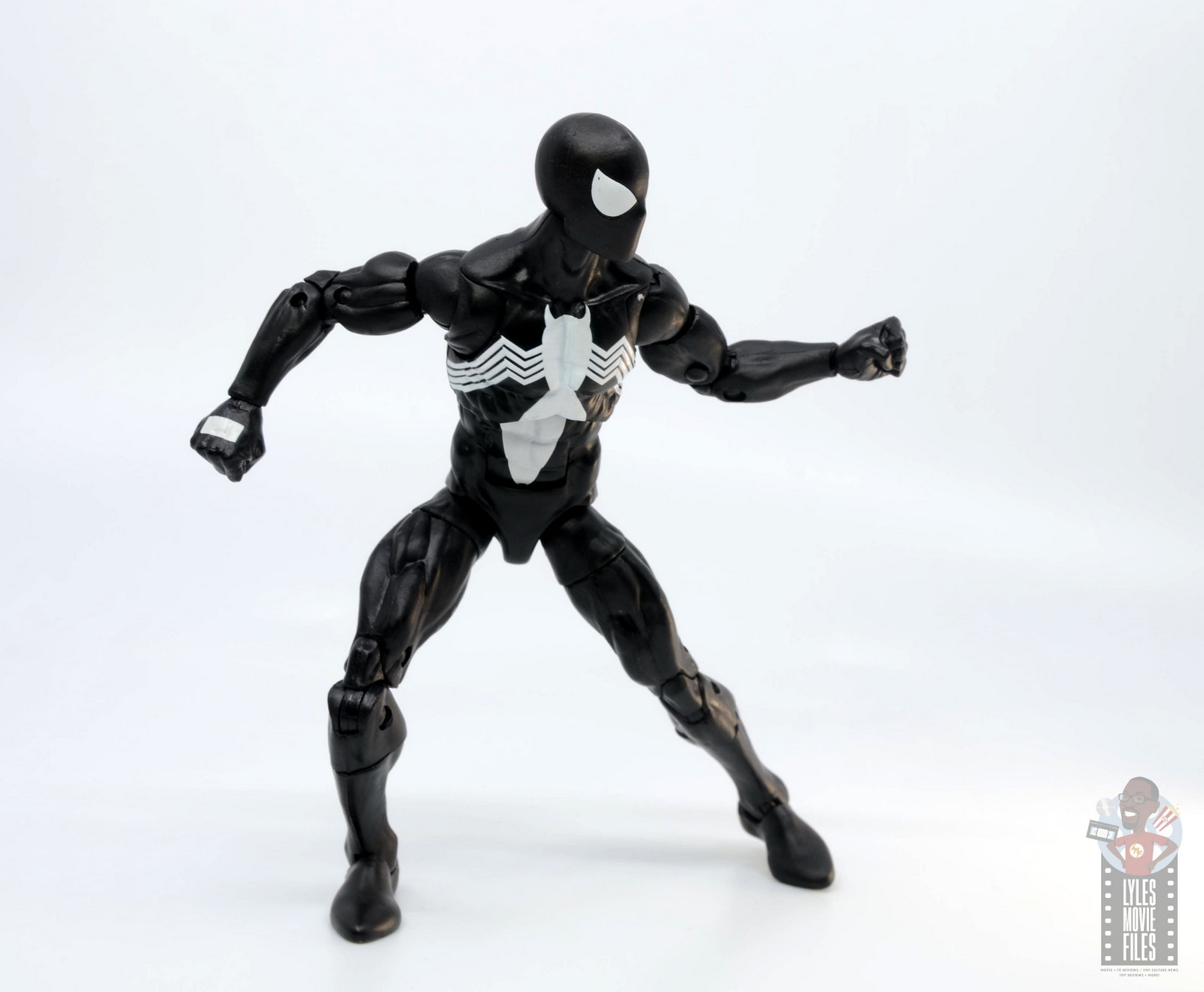 The Pizza Spider-Man body version was a strong figure. But the articulation enhancements are what really make this upgrade worthwhile. 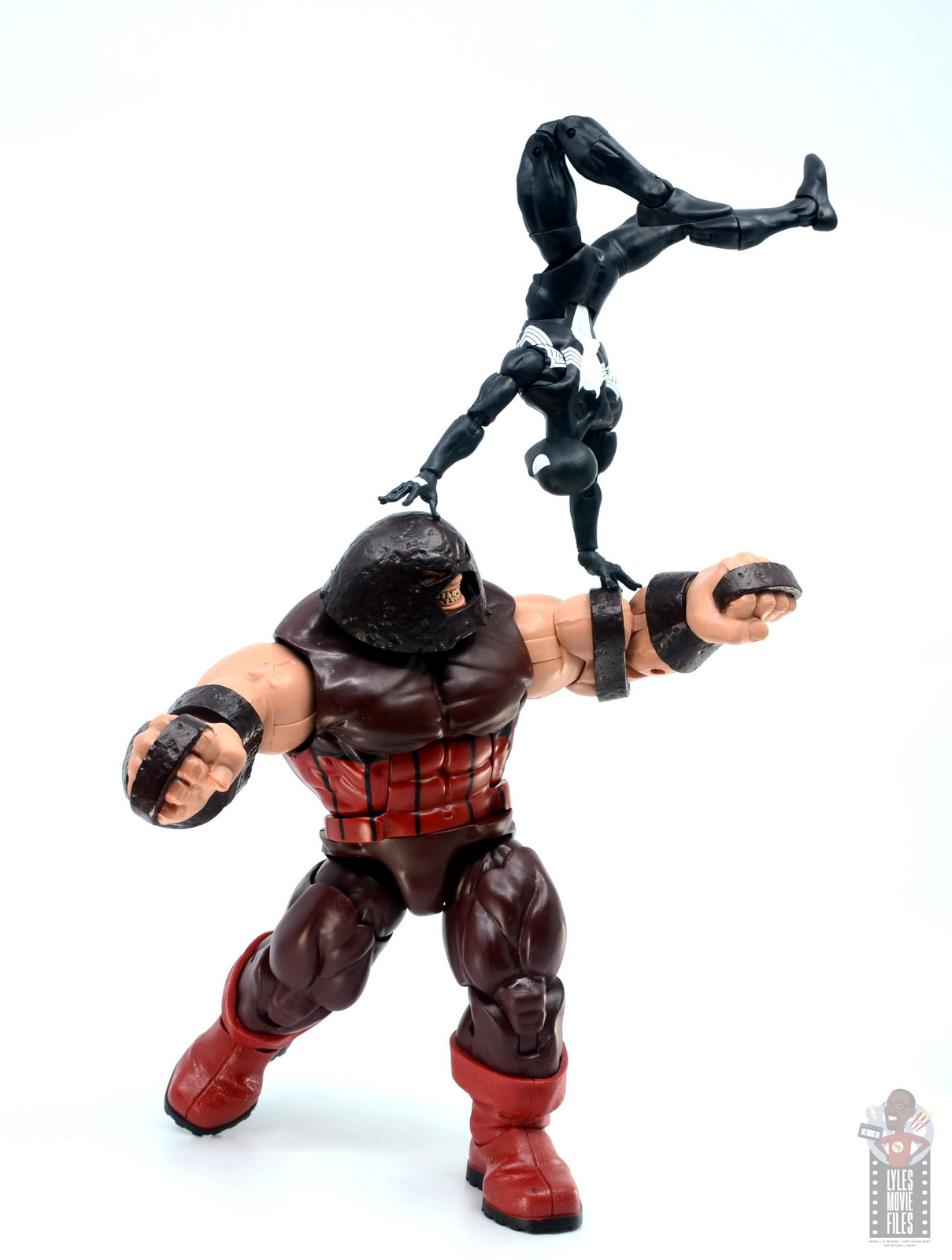 It’s best setup for a Spider-Man figure from Hasbro yet and can do whatever a spider can at this point. Along with the sleek aesthetics of the black costume, the figure just looks very cool pulling off moves. 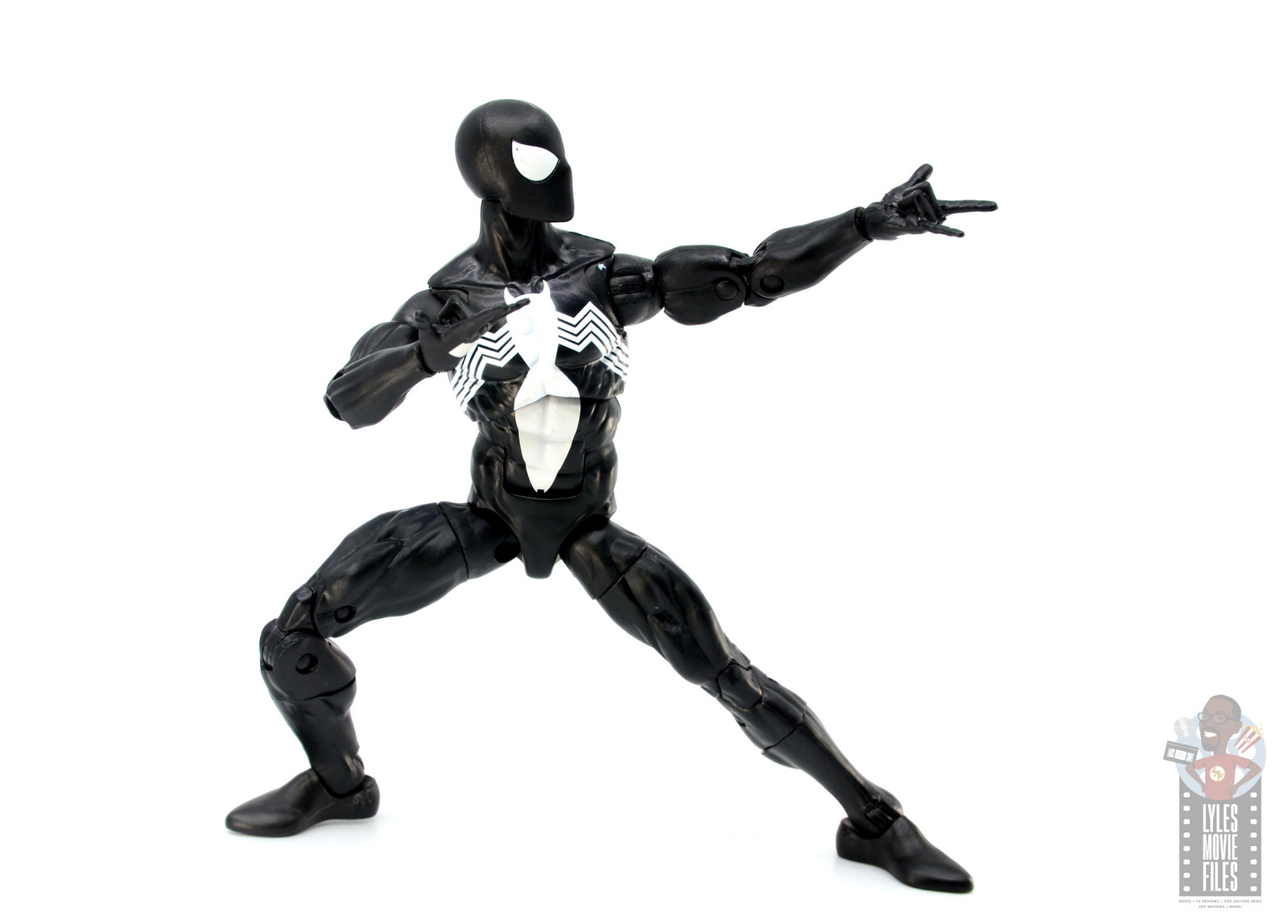 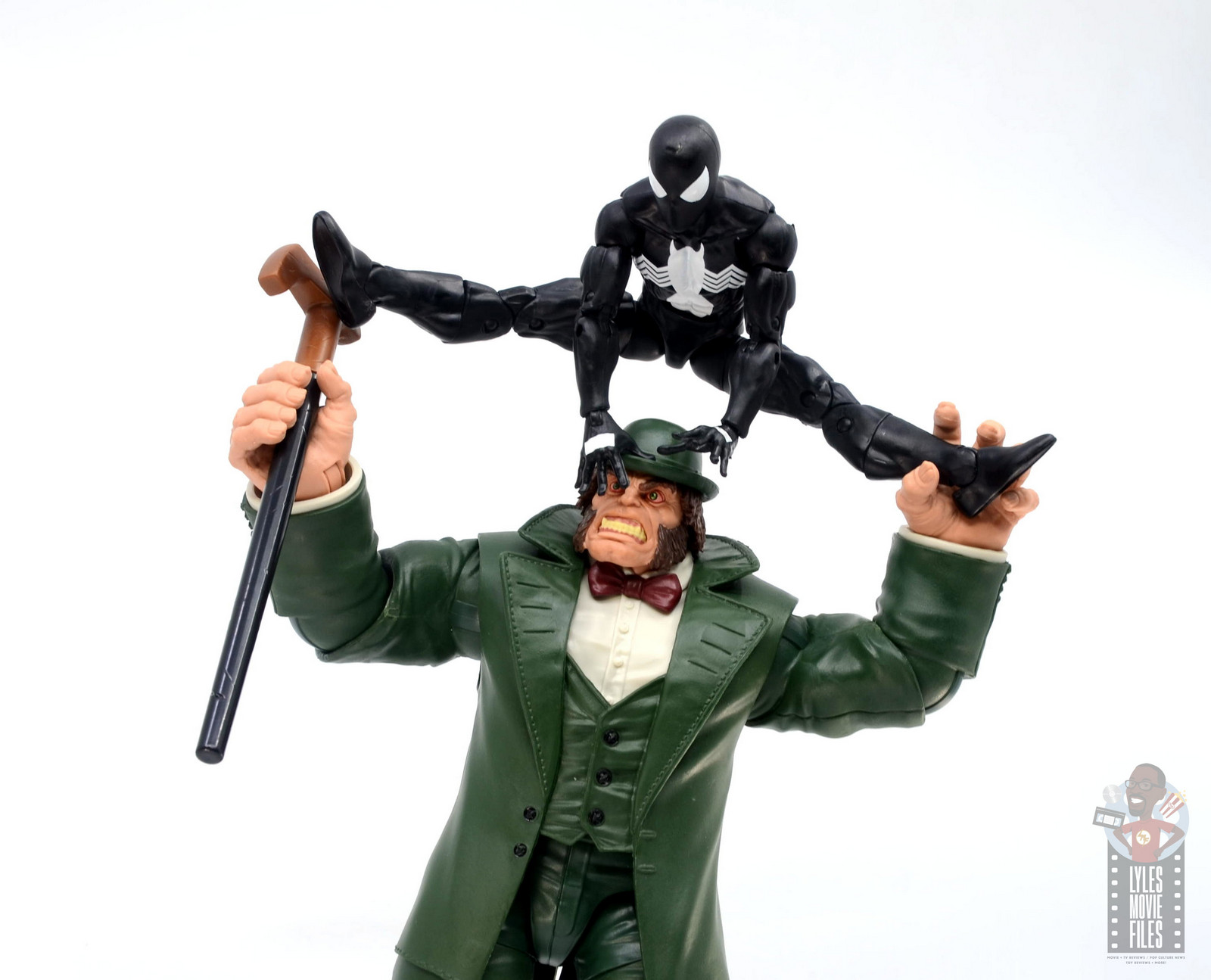 Accessories:  Retro Symbiote Spider-Man comes with extra sets of web shooting and wall crawling hands. Along with the default hands, the major Spider-Man hand needs are covered. That’s it for accessories though, which seems sparse. 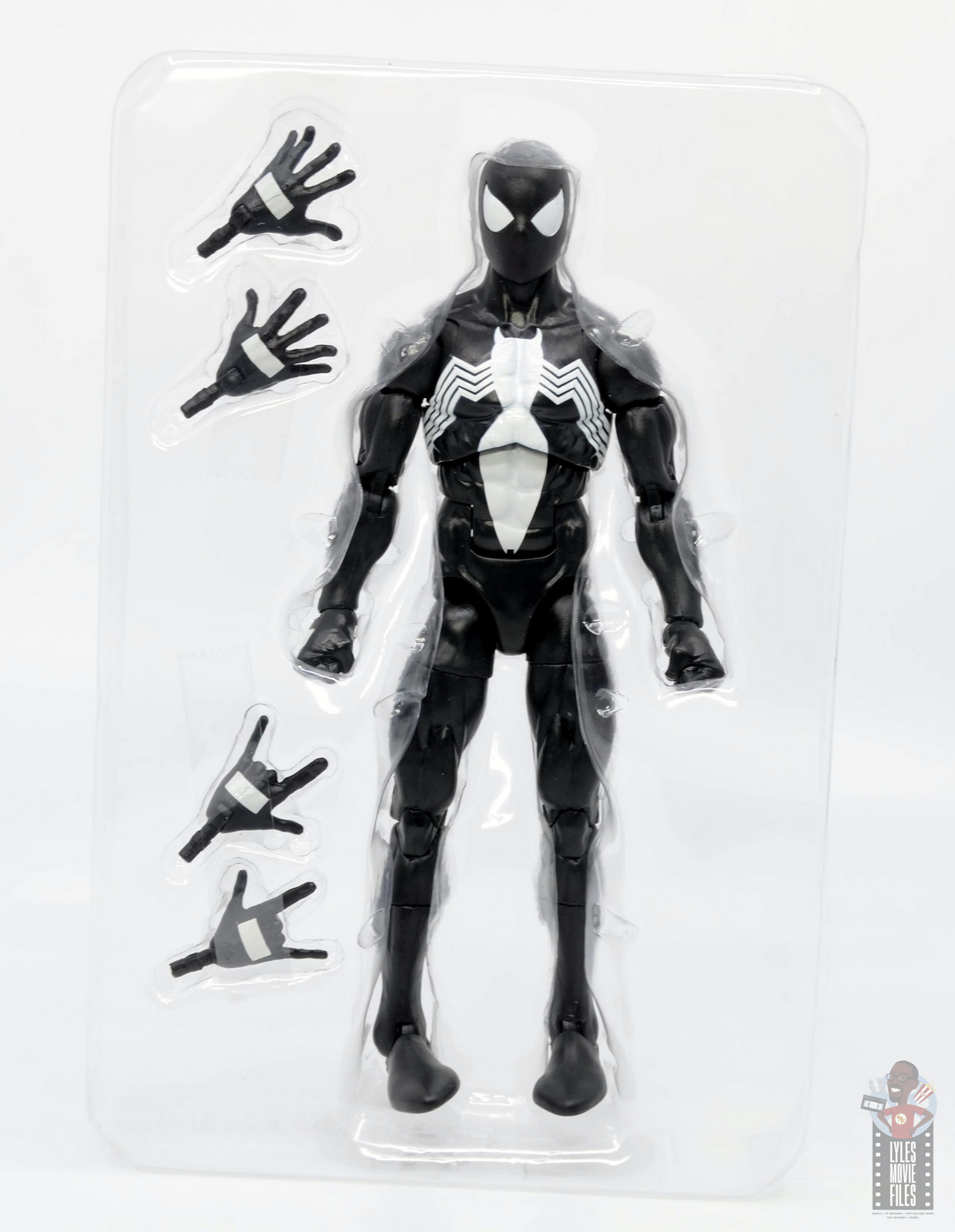 The Retro line is based on easy reuse for most figures in the wave but tossing in one of the Peter Parker head sculpts would have been nice. 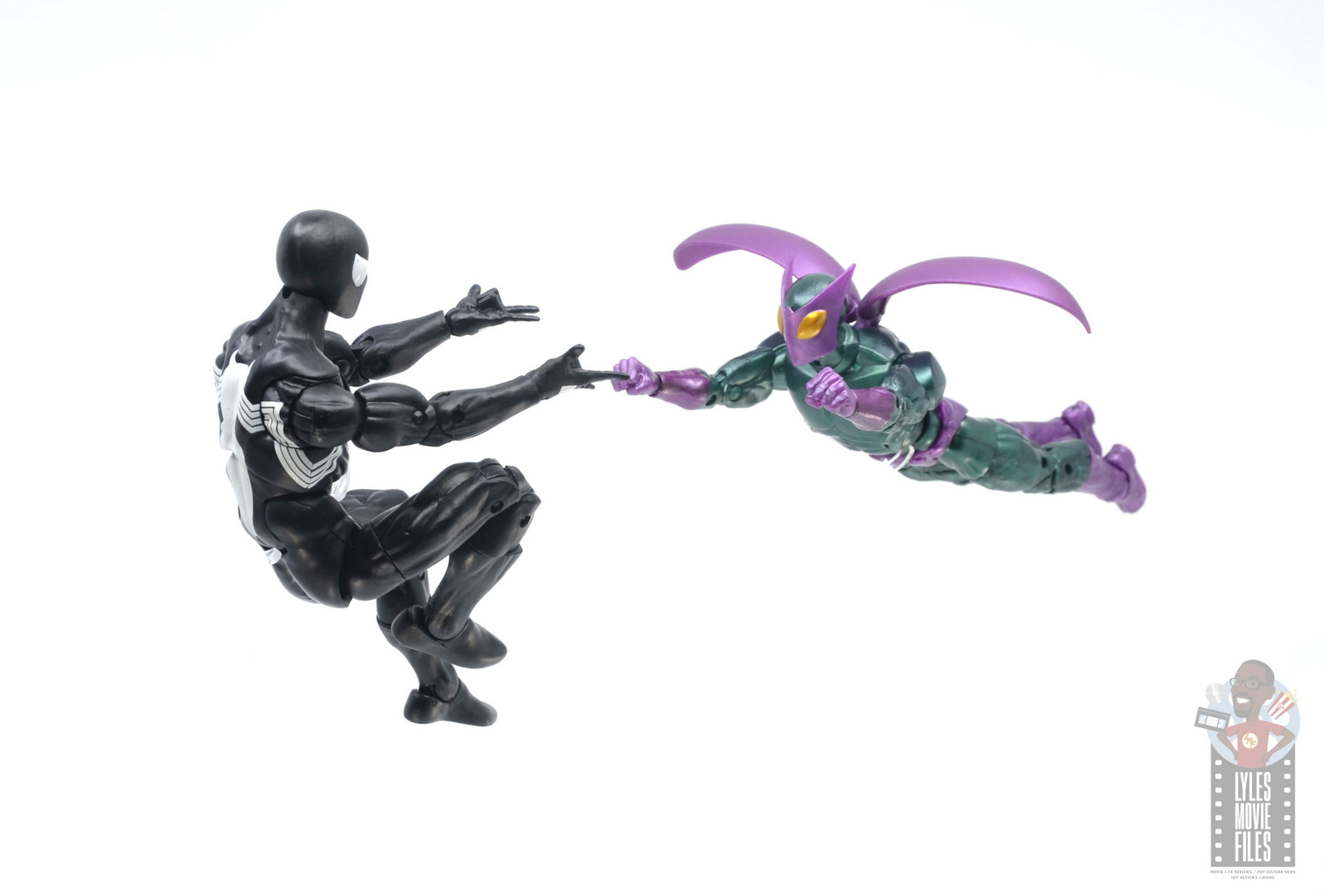 Worth it?  I got this guy for under the regular $20 price thanks to a Target coupon. These figures aren’t the great deal they once were now at the current $22.99 price.

Without the Build-A-Figure sell point, we’re getting less and paying more. This will definitely make me more selective of what I buy at regular price these days.

The only thing that held the red and blue back from a perfect score was the different colored pins. That’s not a problem here. Even though the value keeps decreasing without a BAF part, I can’t see needing another Symbiote Spider-Man figure. 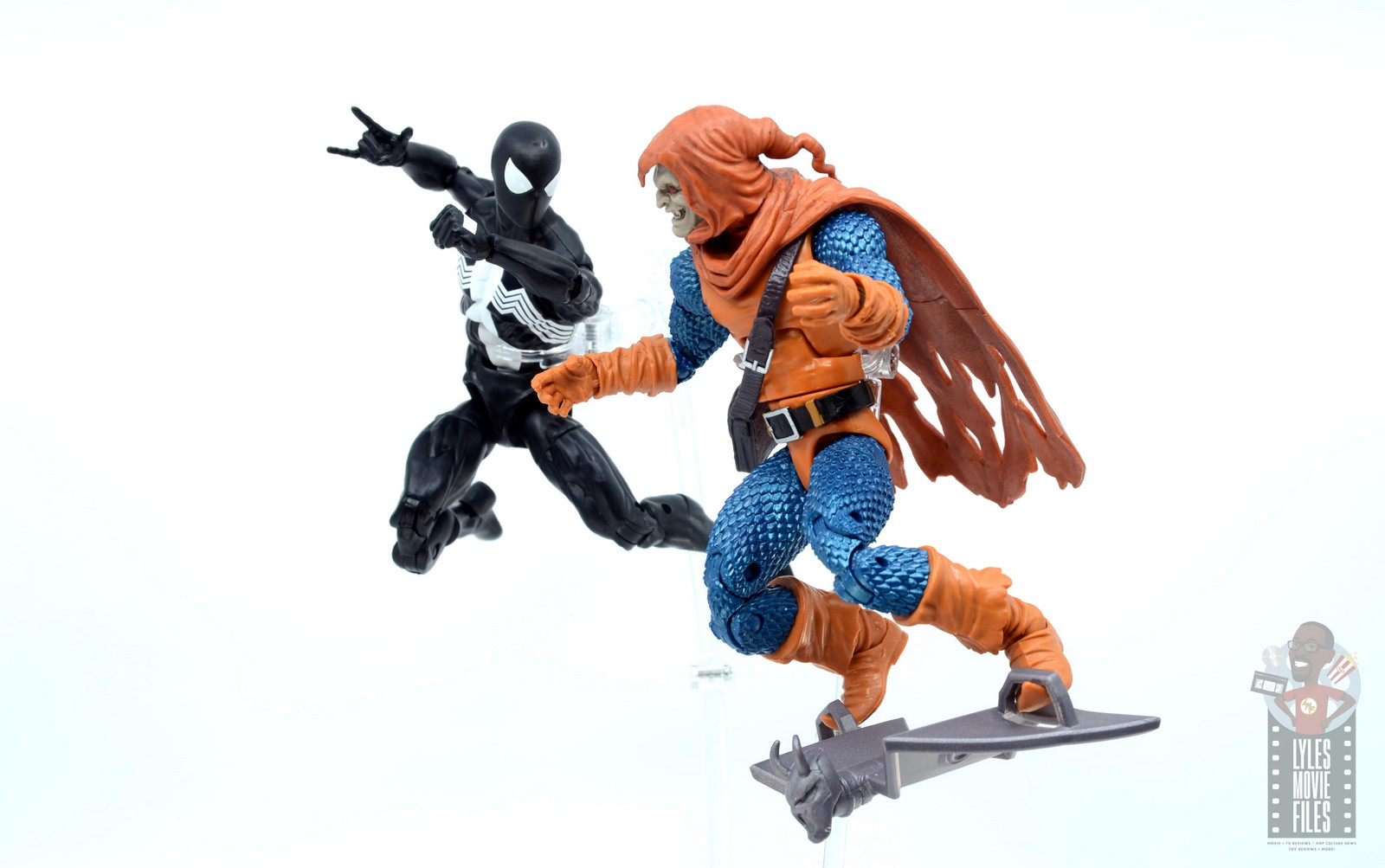 Where to get it?  You should be able to find this wave at retail at this point at Target. You can also try Target’s website, Amazon or Entertainment Earth.

As an Amazon Associate and Entertainment Earth/Target affiliate, I earn from qualifying purchases.