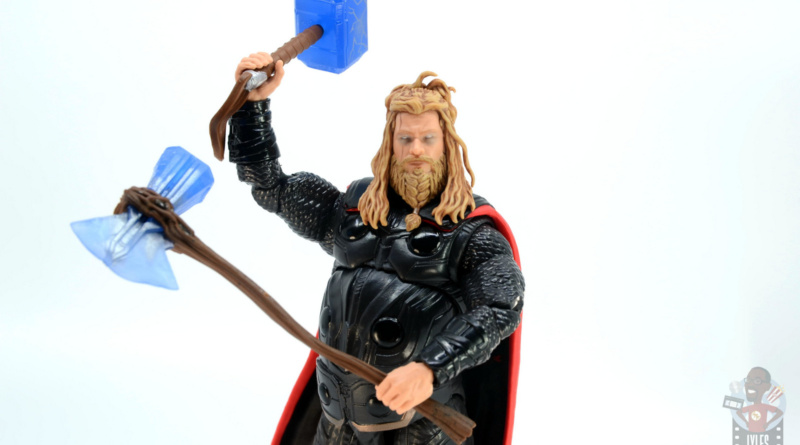 Yes, this is super late, but what can I do? Thor’s lasting appearance in Avengers: Endgame was a memorable one. It showed the effect of the past five years of depression at his failure to stop Thanos. Marvel Studios played it for some laughs, but the Odinson did reclaim his pride and fighting prowess despite being a little heavier.

Hasbro released a Build-A-Figure with Thor’s “party” look, but this Infinity Saga version features him in all his battling Thanos glory. Let’s see if lighting strikes once with this figure.

Packaging: The Infinity Saga features a very different package set up from the norm.

It’s mostly black with blue accents with a collage of the main heroes of the Phase 3 films on both sides. The window is nice and wide allowing you to see most of Thor and his accessories. 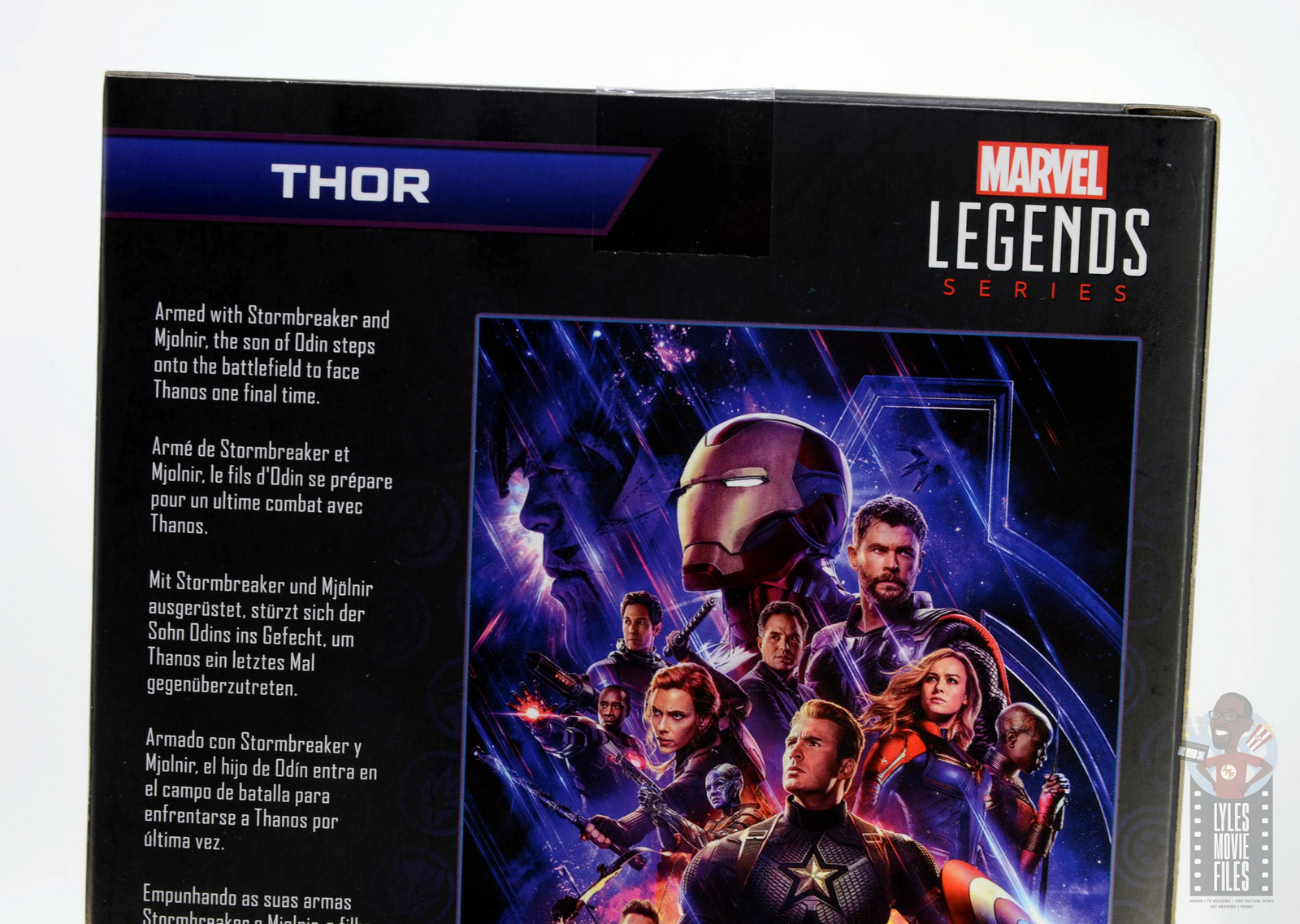 Thor’s bio is sparse, but considering Endgame is one of the biggest movies of all-time, I’ll give Hasbro a break. Most folks know exactly what this look represents.

Likeness:  When it came time to fight Thanos again, Thor was ready. His belly and thighs might have been larger, but he wasn’t a joke on the battlefield. 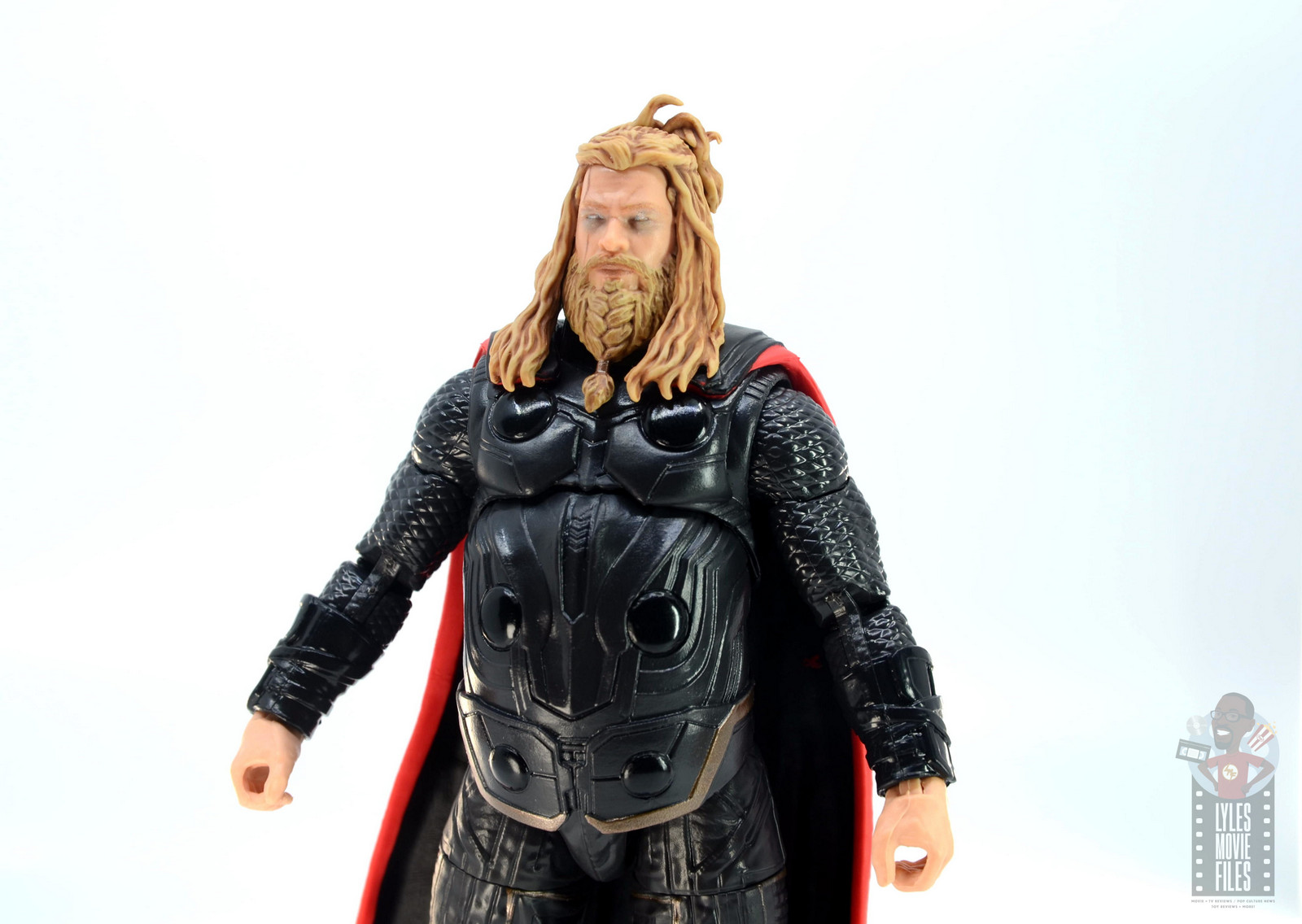 We’ve seen this armor before, but Hasbro actually took the appropriate steps to make the chest, stomach and thighs bigger. It’s not done to an exaggerated fashion, which is cool as he wasn’t a clown fighting Thanos and his army.

All of the detailing is intact with the panels, the lining and the chainmail. He’s got a serious head sculpt with the scar over his right eye. Thor’s hair really was done nice as well with a more intricate beard and pony beard and the hair knot in the back. 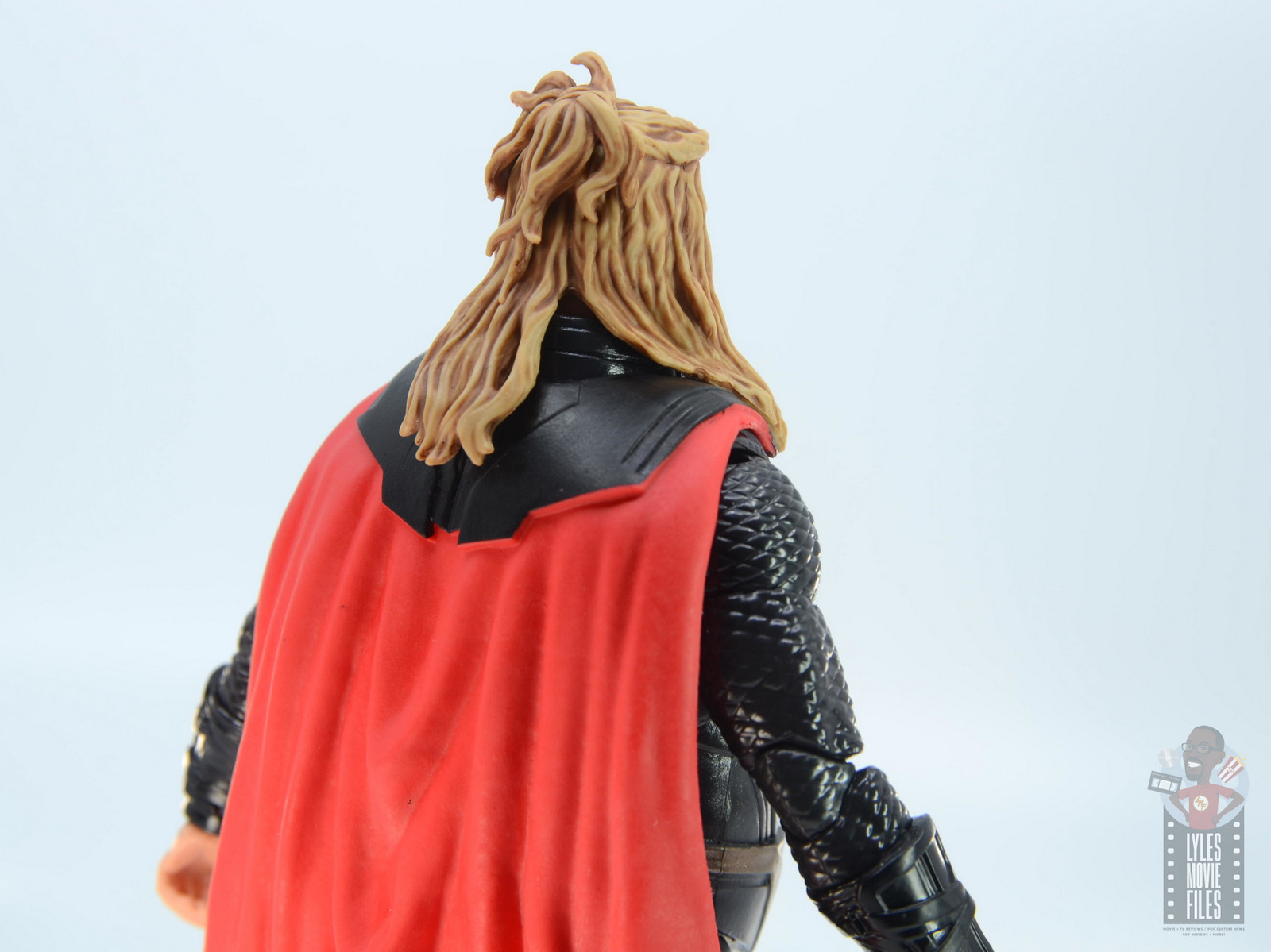 I’m torn on the eyes as he is very attuned with the lightning for much of the fight and they’re glowing. I just think it would have been better to have a non-powered up look for them.

His cape hangs at an appropriate length and is pulled back beyond the shoulders so it won’t hinder his movement.

Paint:  I mentioned the eyes already, but the glow effect is really nicely done right down to some slight black around them to convey lightning. The scar turned out well and the hair got a brown wash to further bring out the details.

Thor’s armor has some distinction in the various areas with a glossy black for the circles and gauntlets and a flat black for the rest. The gold trim is mostly sharp with cleaning lining. There’s some areas that are missing or have the black bleeding through. 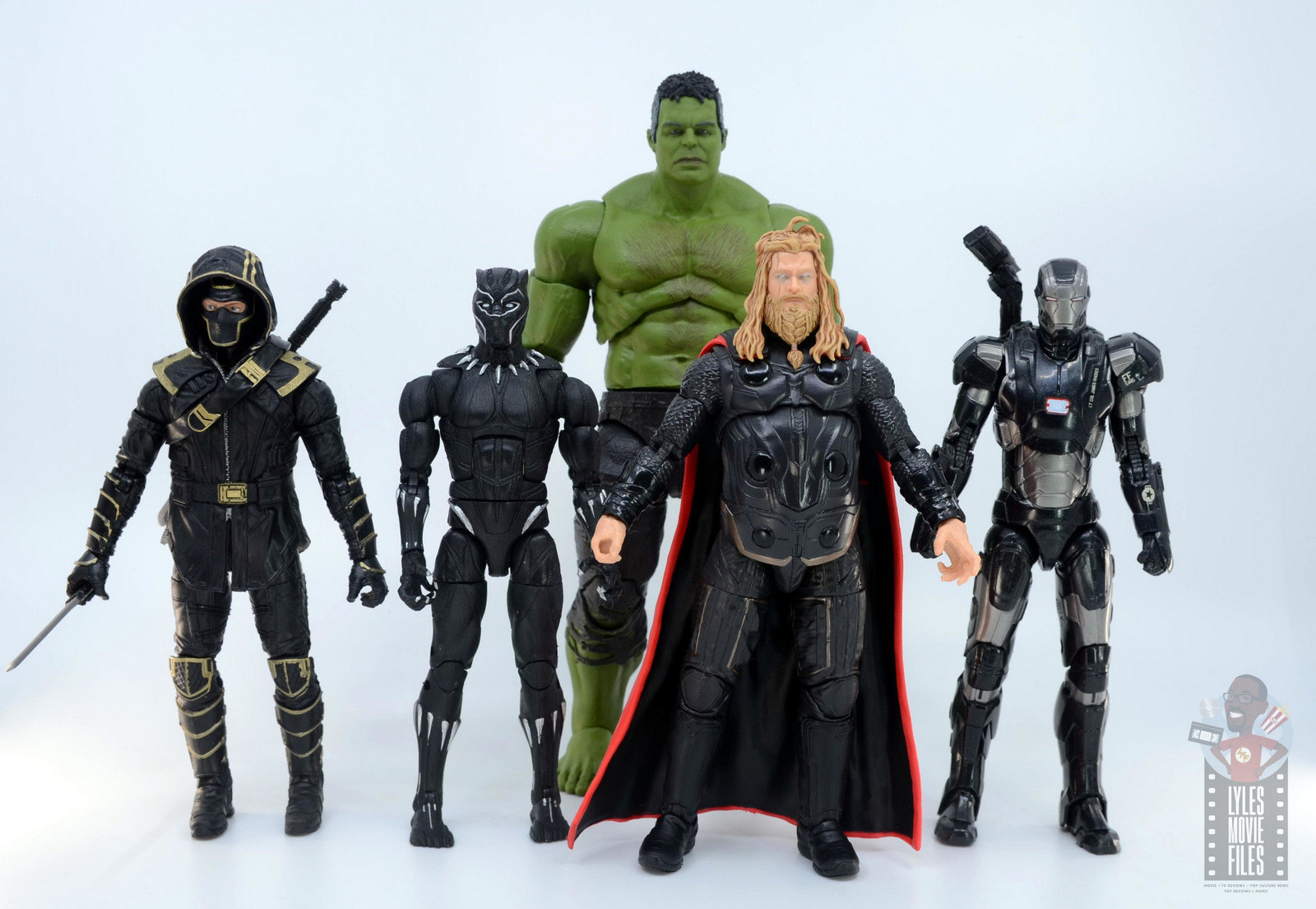 Scale: Thor is the tallest of the normal sized Avengers and his figure is appropriately taller. 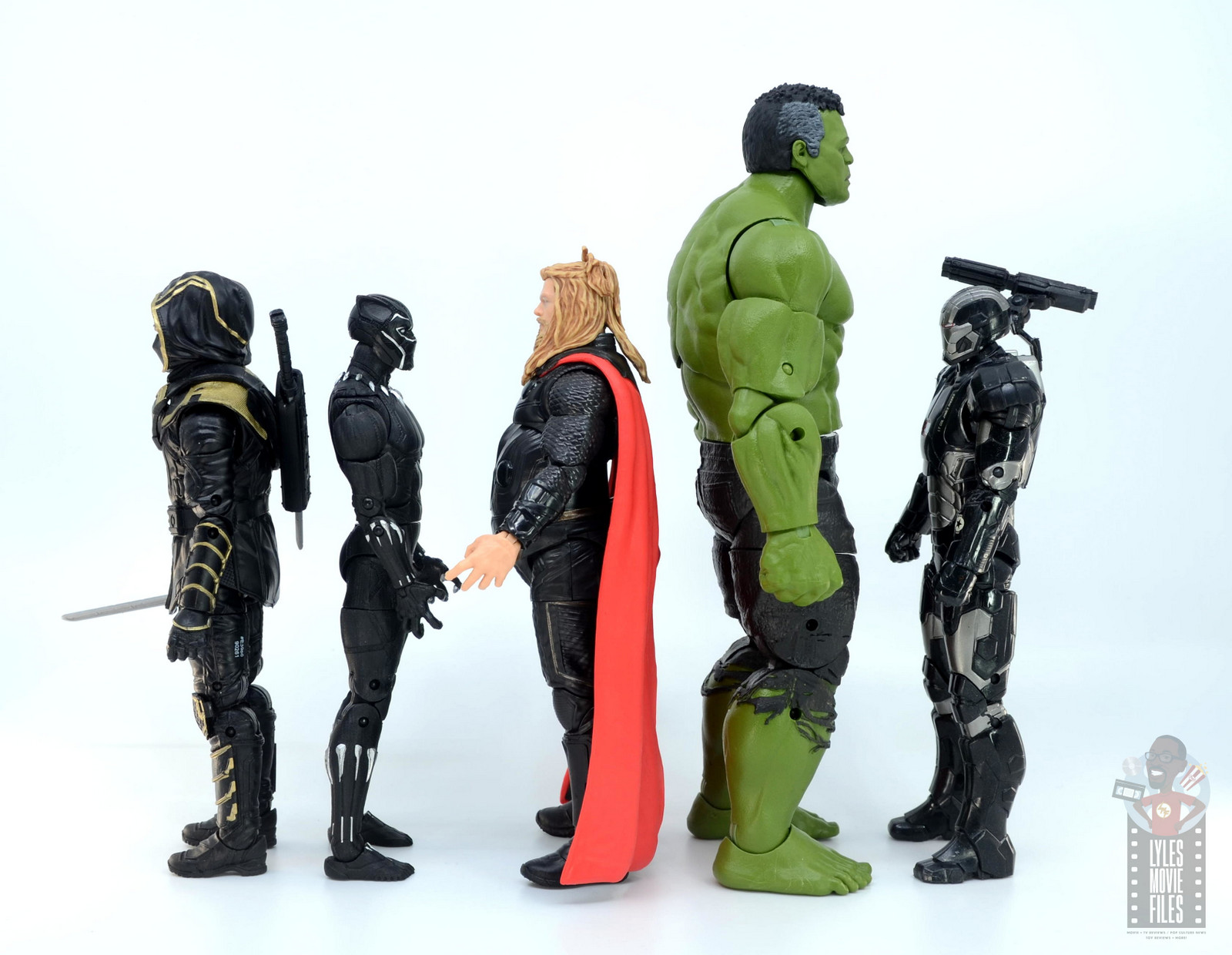 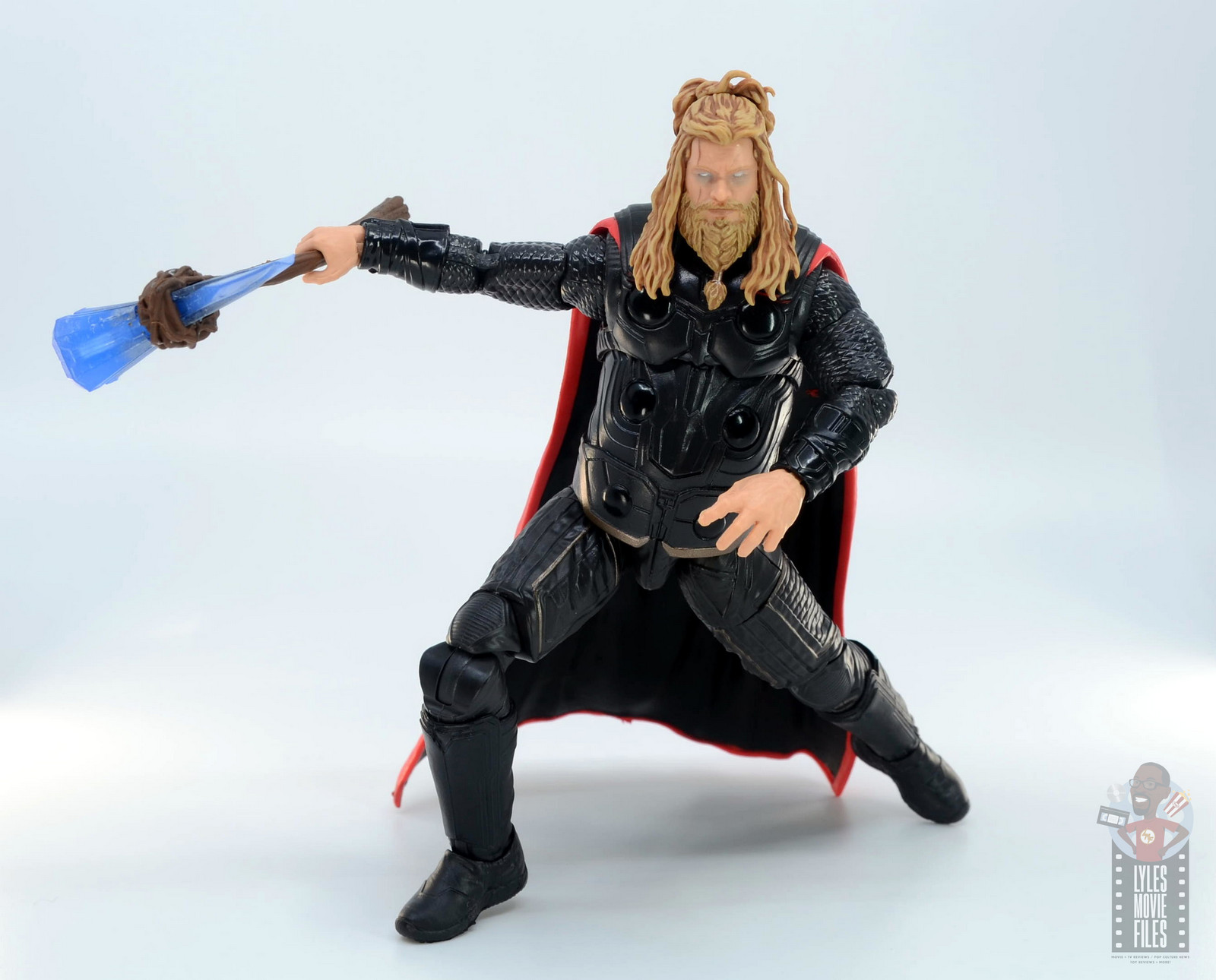 Articulation: Thor might not look as formidable, but he still had all of his agility and most of his speed. 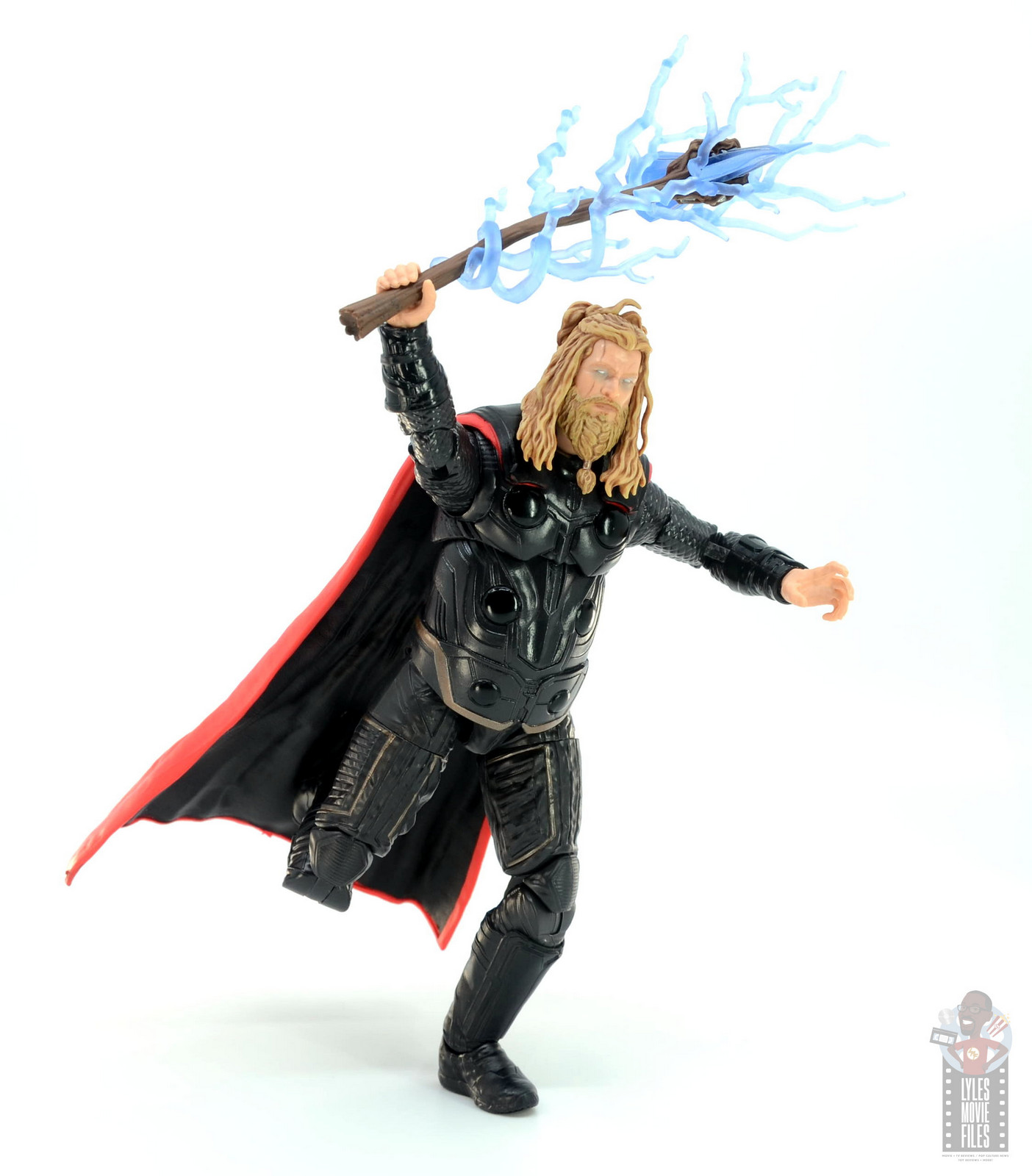 You’ll mainly want to have him swinging Stormbreaker and Mjolnir though so high kicks and flips aren’t as essential. If it weren’t for the thickness of the cape you could even do the ducking Stormbreaker scene from Endgame. 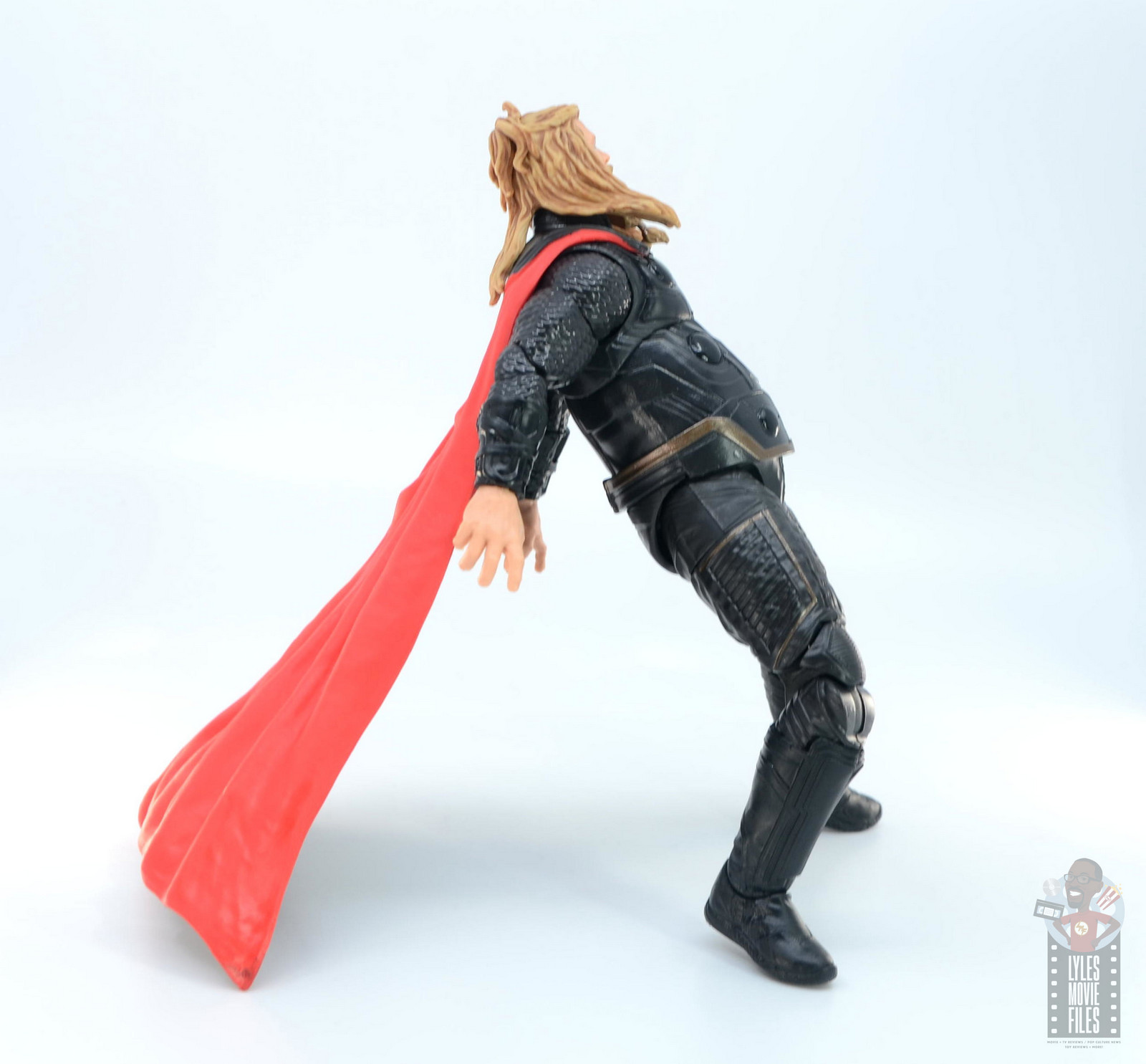 Hasbro didn’t shortchange his articulation and I was very impressed by his range of motion even with the larger stomach. 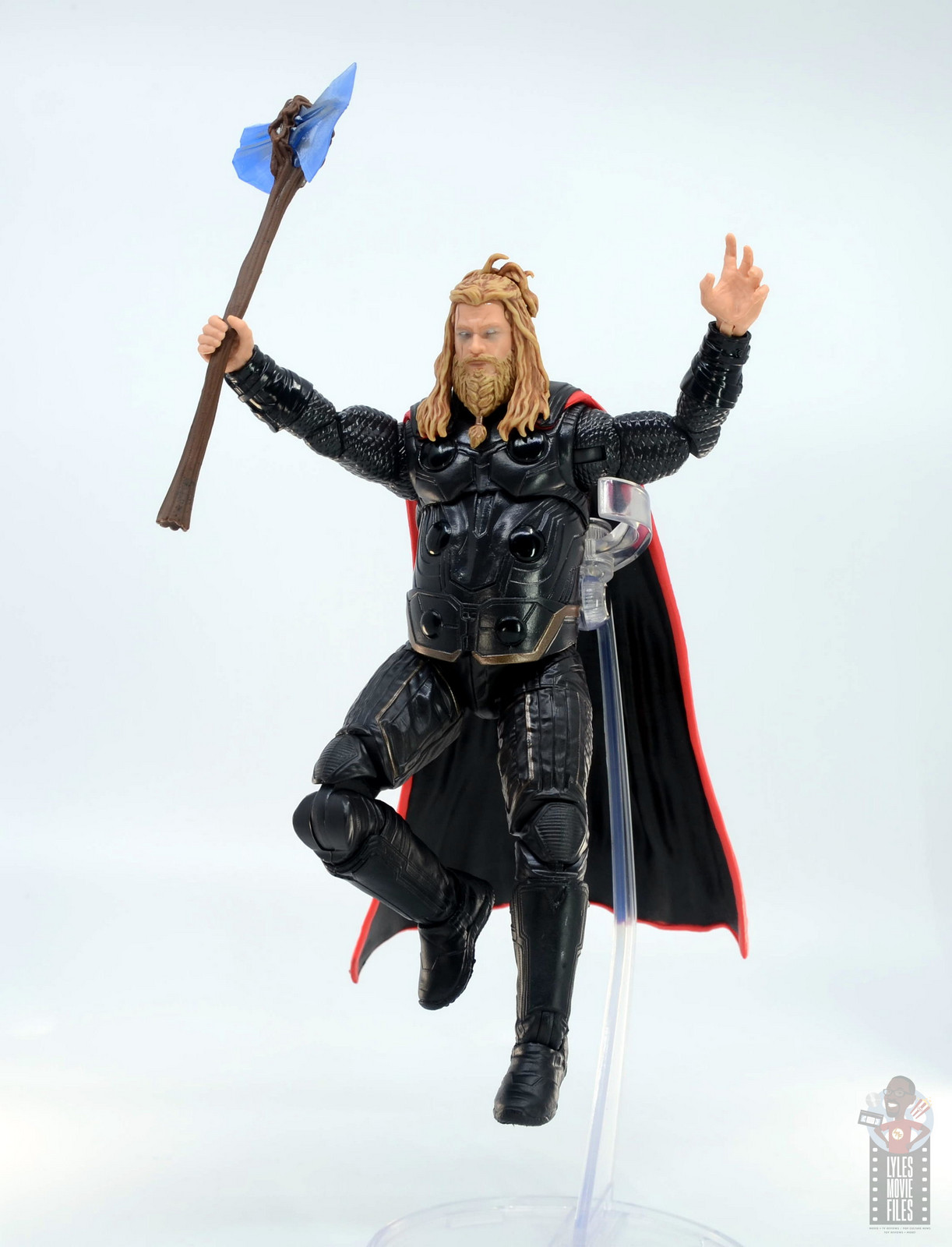 Accessories:  Thor naturally comes with his big weapons, Mjolnir and Stormbreaker. Both metallic portions are cast in a translucent blue to indicate Thor is channeling the lightning through them. 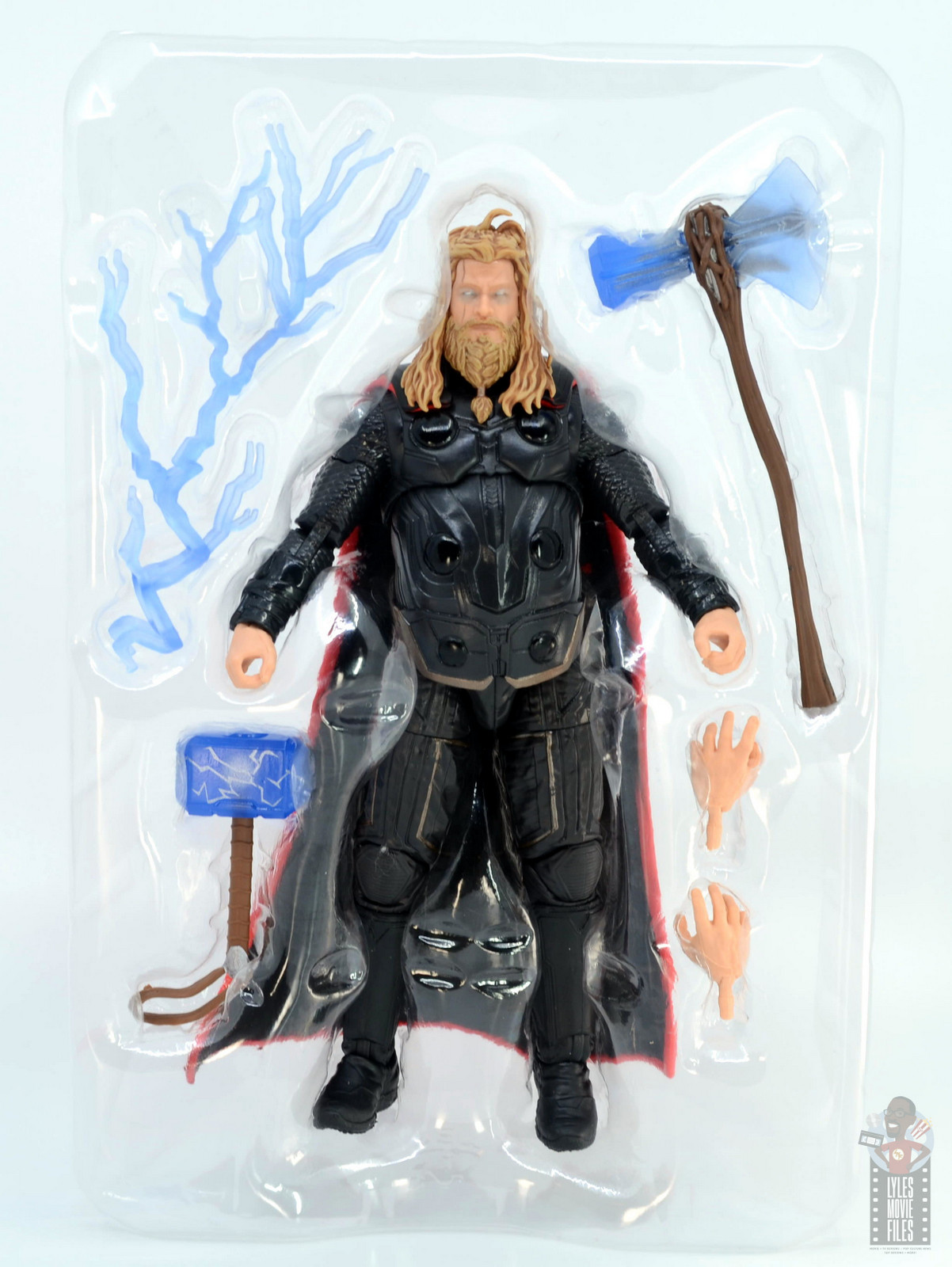 Stormbreaker’s hilt features some strong detail with the wrap around the blade from Groot’s fingers and it has a slight curve. That’s a nice touch. 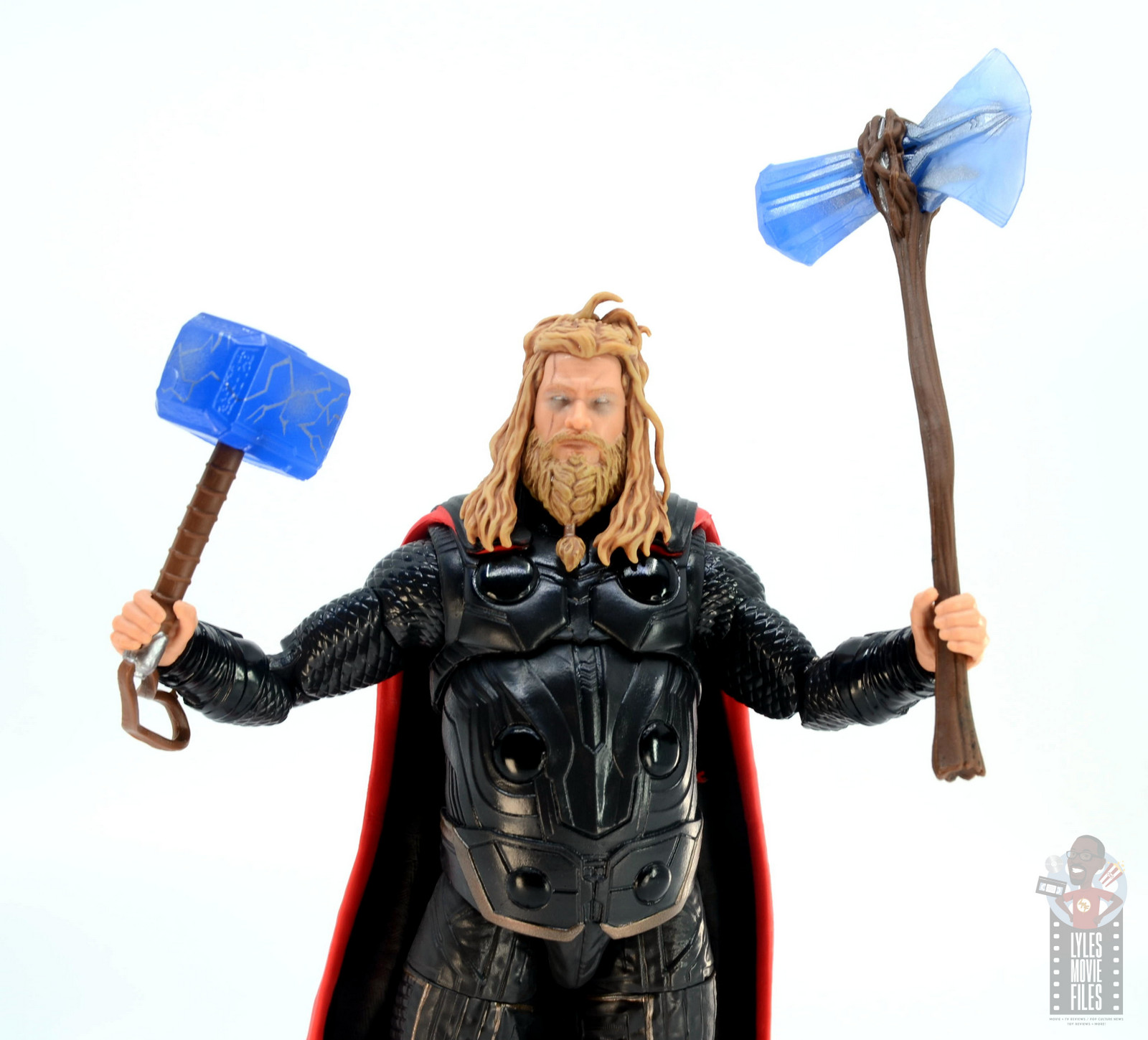 Mjlonir gets a lightning crack in the metallic area. Its hilt seems like it could have been a darker shade of brown to not look so much like a toy hammer.

Thor also has outstretched hands to summon his weapons after tossing them at Thanos. 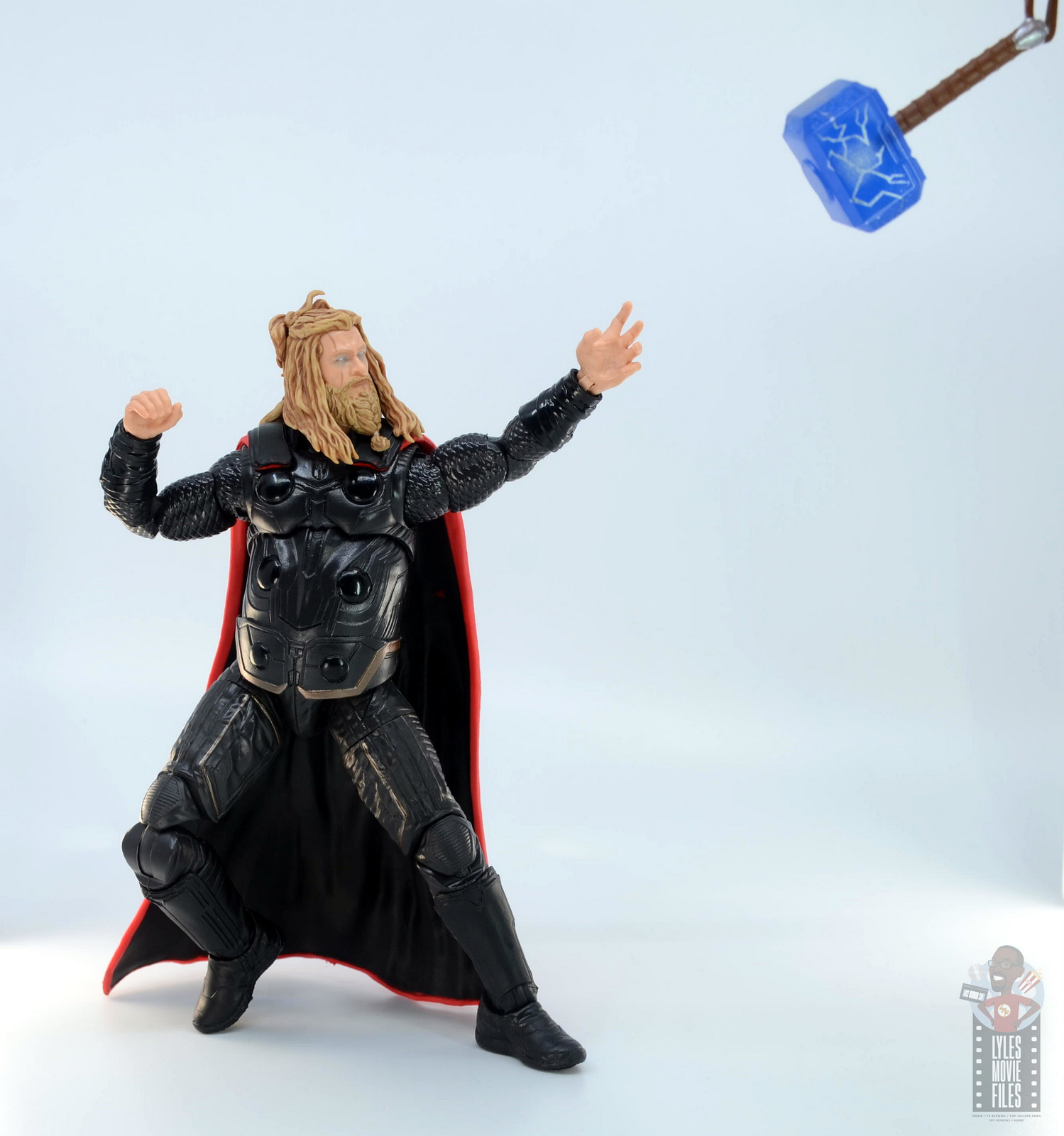 Finally, he has a lightning burst for Stormbreaker.

Worth it? These were originally $25. That’s a super steep price for any Marvel Legends figure and especially one without the Build-A-Figure inclusion. I was able to get Thor for $12, which was too good a price to pass up on it. 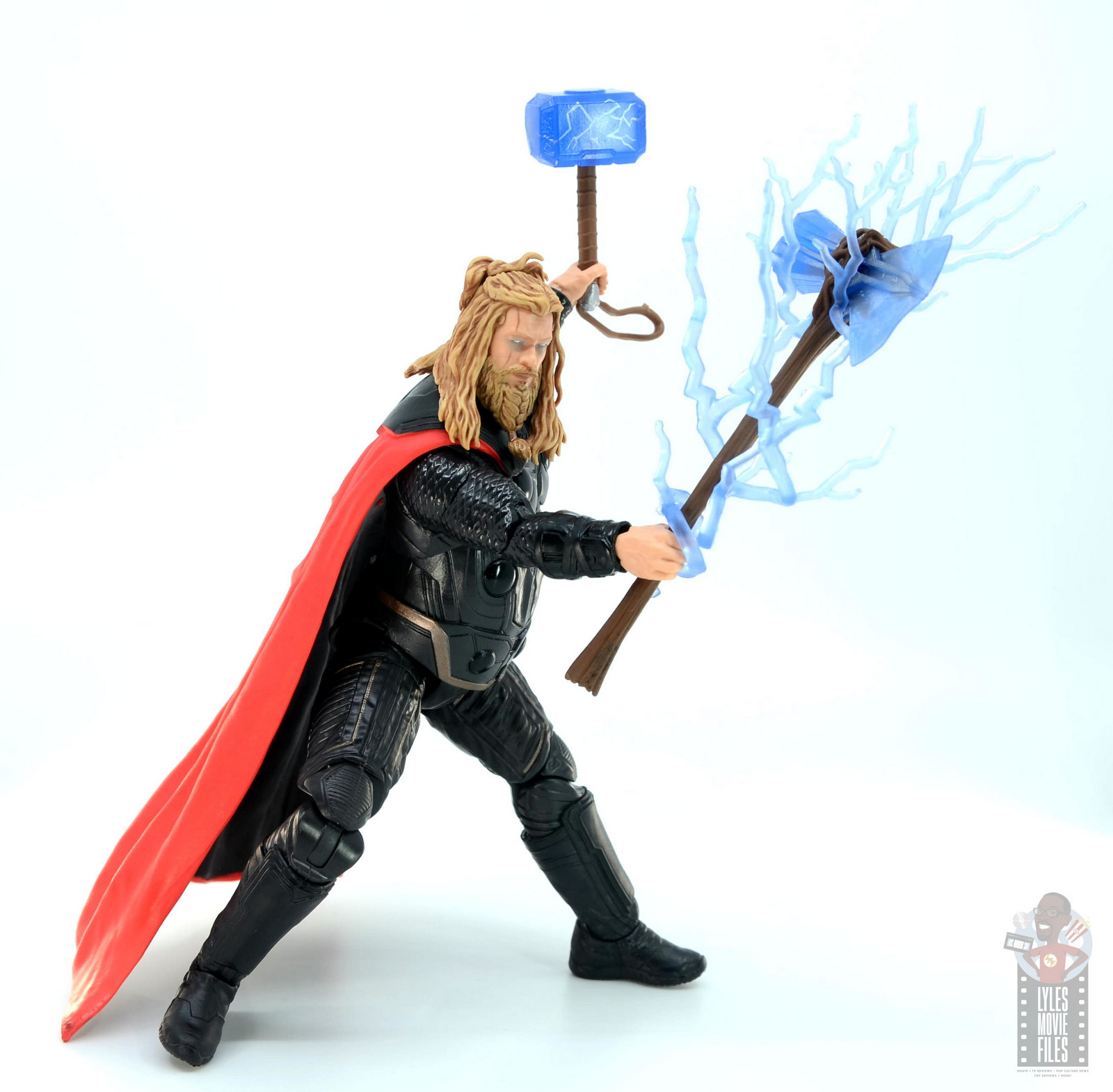 Endgame Thor is a surprisingly strong figure. A neutral head sculpt would have been a nice addition, but otherwise this was well worth picking up especially at a discount price. 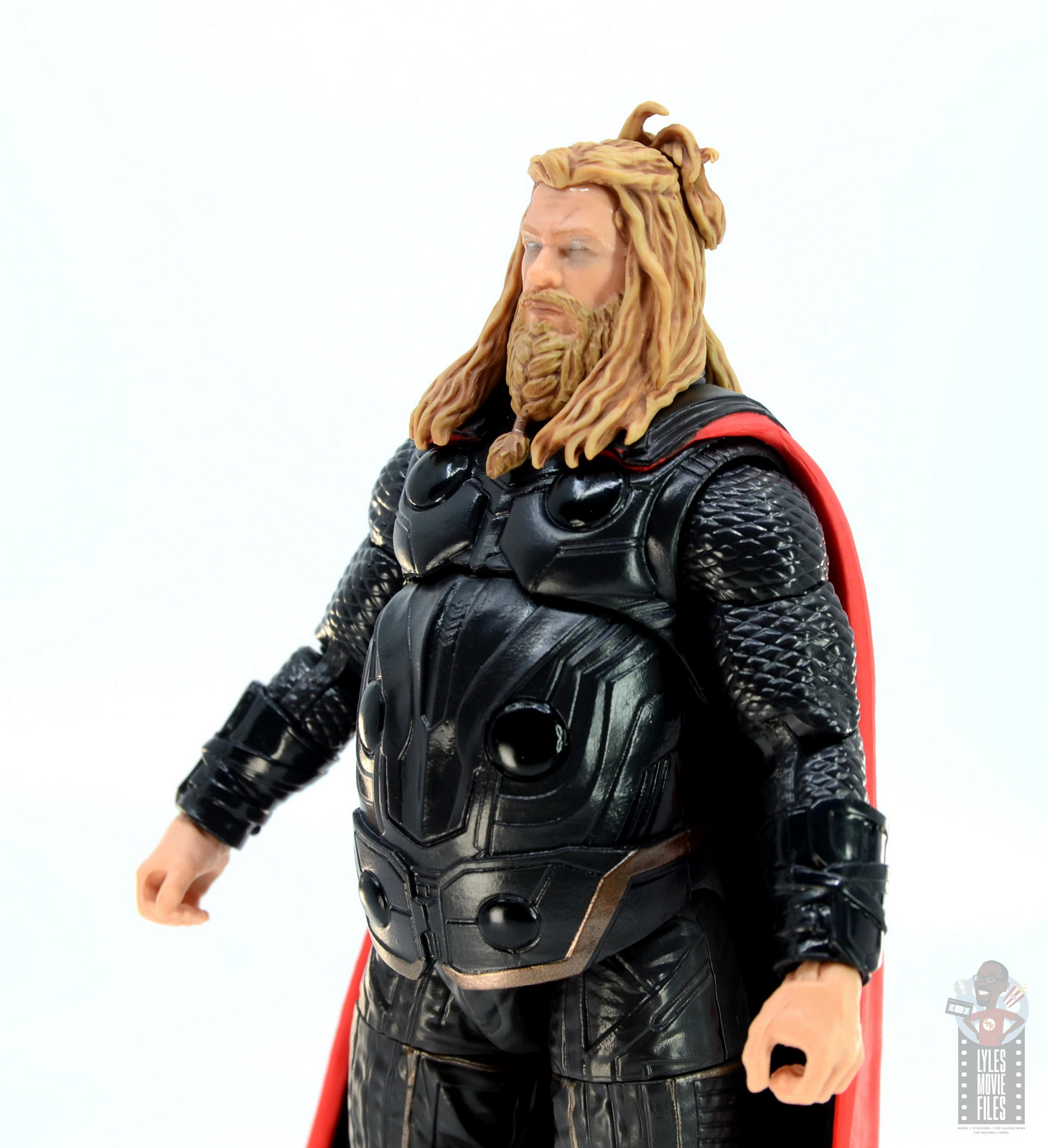 Where to get it?  I got Infinity Saga Thor from Wal-Mart and he was on clearance. Hasbro Pulse still has him for $27. Amazon doesn’t appear to have him in stock now although Entertainment Earth has him available for pre-order for an August 2022 release.