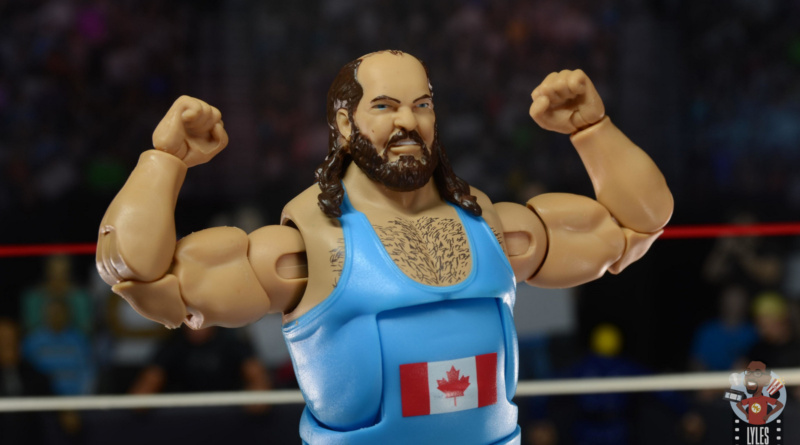 Earthquake was one of the WWF’s best monster heels of the early 90s. He was massive and dominated the competition en route to a memorable feud with Hulk Hogan. In true WWF fashion, Earthquake had to work his way up to taking Hogan out and that included an impressive showing at the Royal Rumble.

For this special Royal Rumble Build-A-Figure wave, Mattel fittingly included Earthquake in the set since the BAF is his manager Jimmy Hart. Let’s see if this version shakes up my expectations or barely registers on the scale.

Packaging:  This is the first figure I’ve grabbed with the updated packaging. It’s definitely busier than the previous setup and has a ton of colors although Mattel continues to reduce the size of the plastic window. That makes it trickier to see if thieves have stolen accessories or the BAF parts.

The comic book style font and setup from previous Royal Rumbles are incorporated into the design right down to the splash effect around Earthquake. His portrait on the front and sides looks good and the reference picture on the back is nice and big. 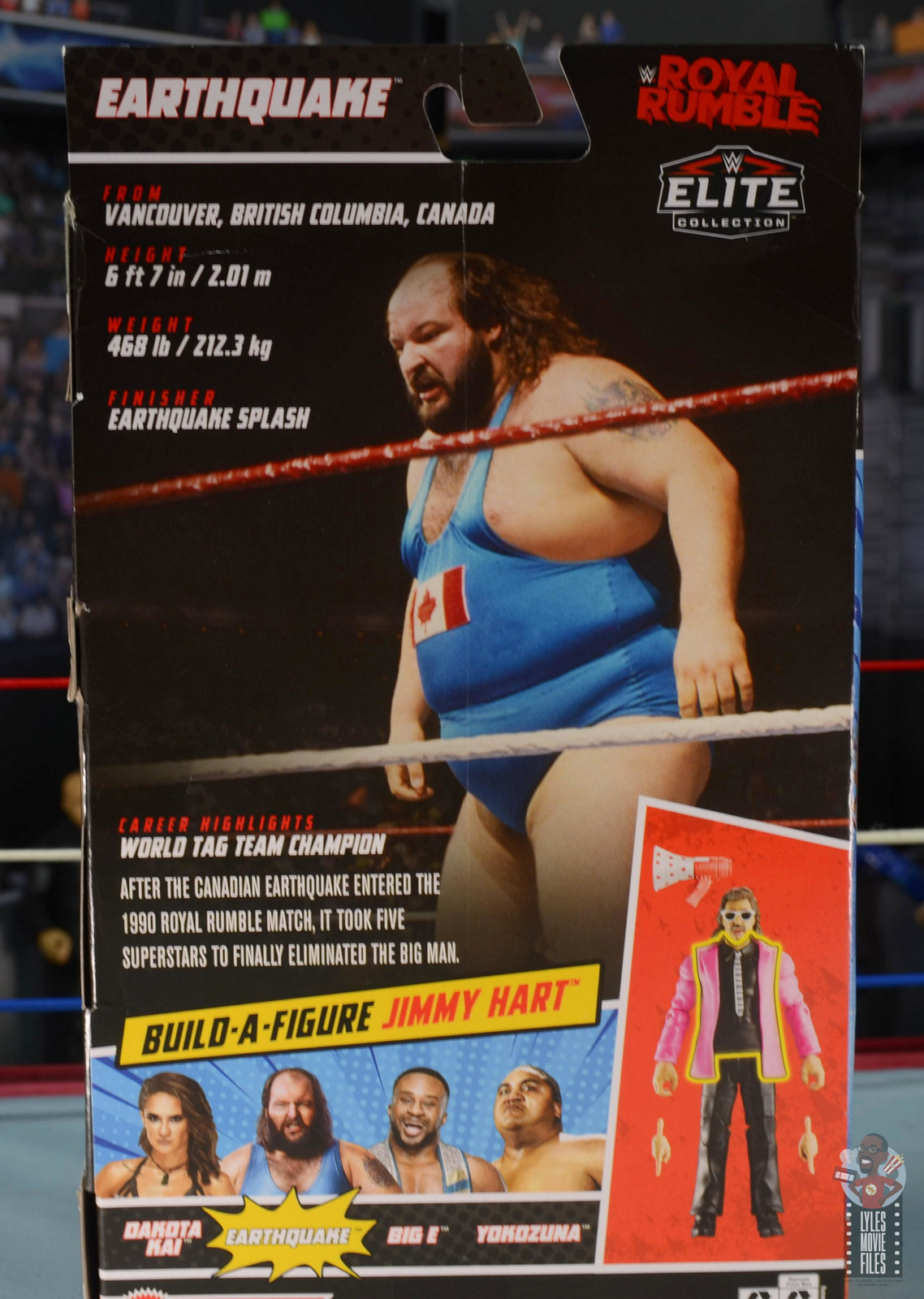 I dig the bio as usual, even though spell check didn’t catch the error.

Likeness:  If you’ve gotten either the Elite 35 figure or the Natural Disaster version you know what to expect here — for the most part. The head sculpt is the same as the previous two. 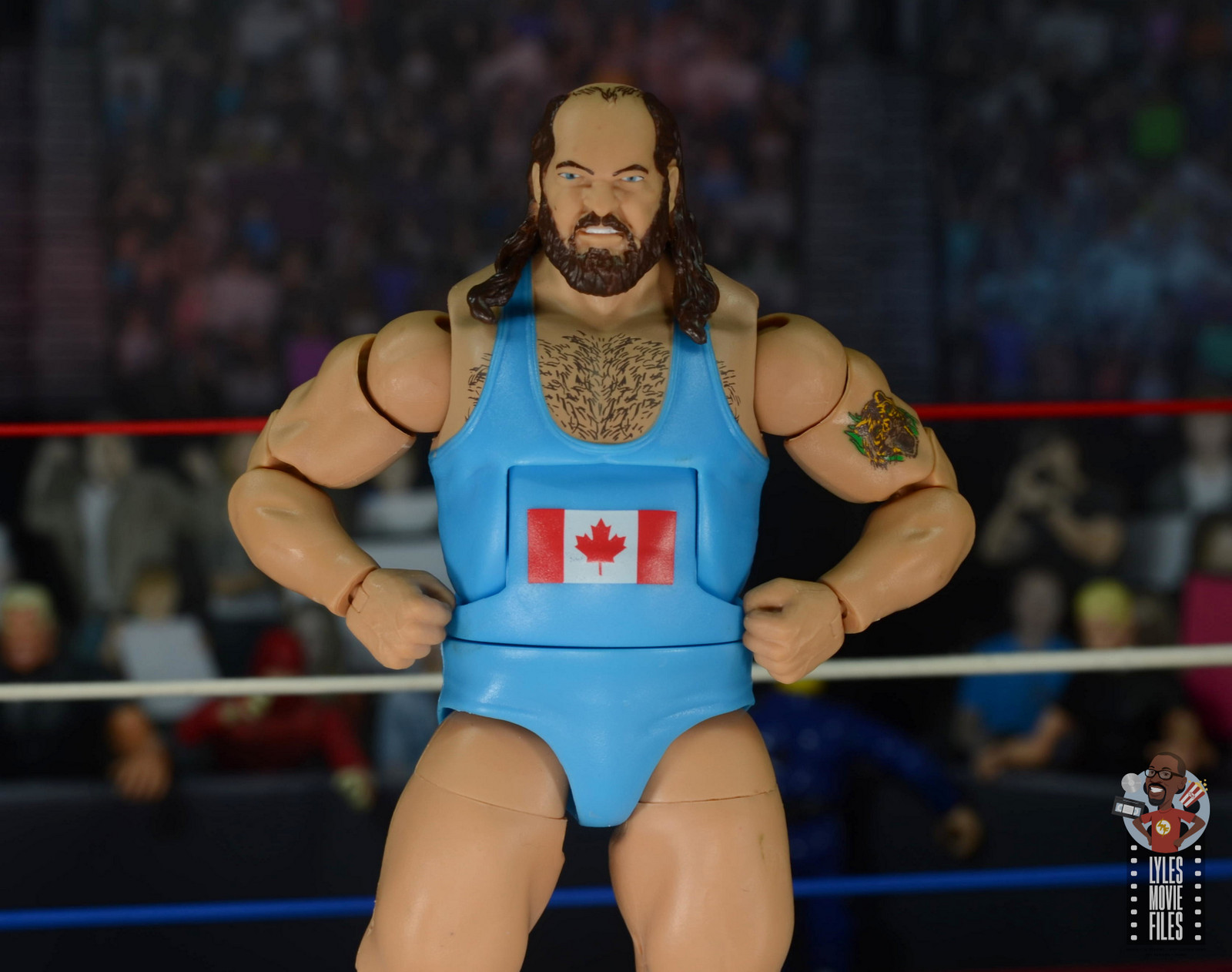 That was a good head sculpt so I’m not complaining too much, but it would have been nice to have a different expression for him.

While he could be even a little thicker in the midsection, Earthquake has nice girth. He was large although I wouldn’t necessarily describe him as fat. Just solid like an athletic sumo.

Scale:  Earthquake was billed at 6’7”. The previous Earthquake figures were slightly small, but this figure is more accurate to John Tenta’s actual height, so I don’t mind Mattel making the appropriate adjustment here. 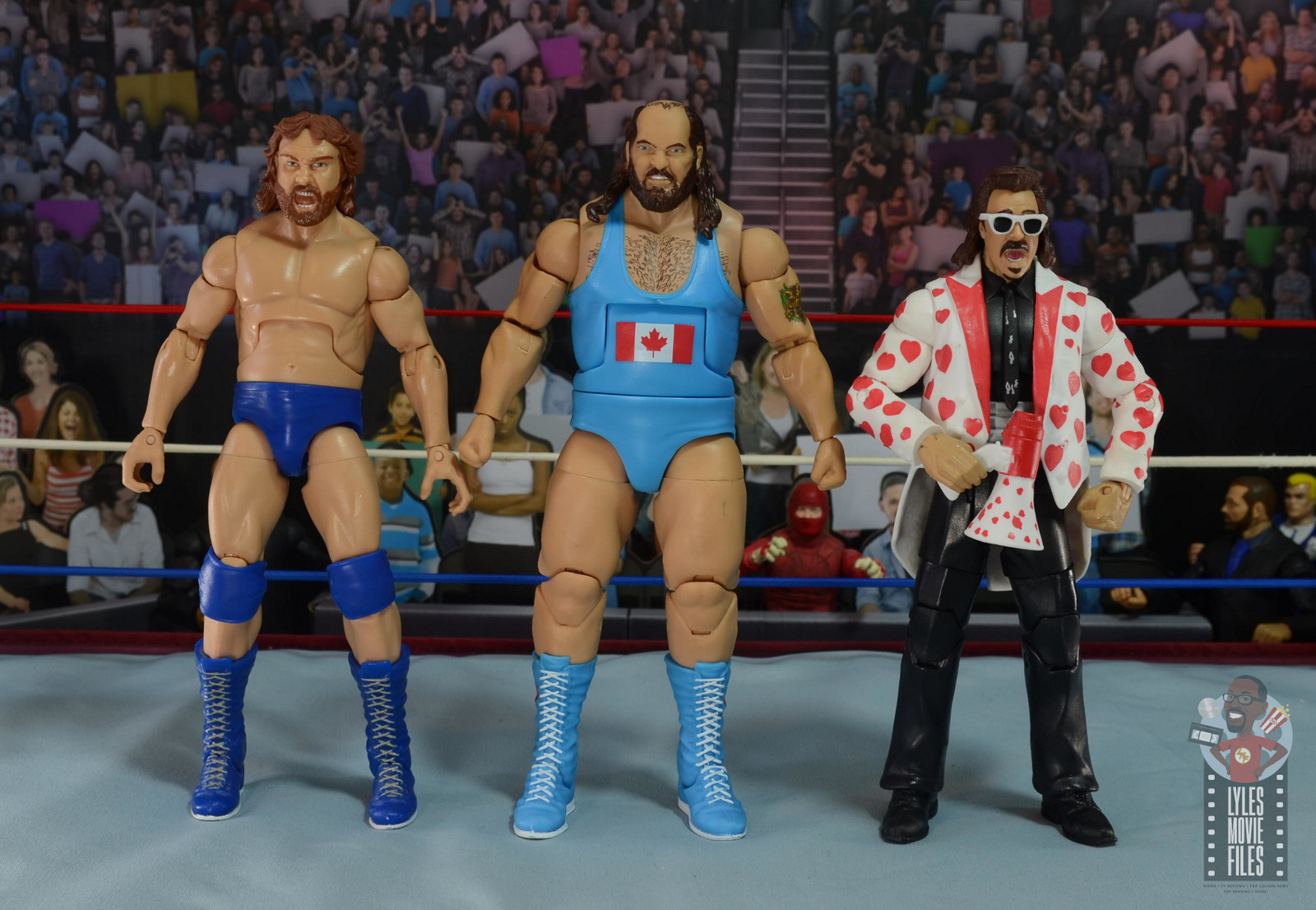 This should put him eye to eye with the 6’7″ Hulk Hogan although Mattel hasn’t done a late 80s-early 90s version of Hulkster yet. The best comparison for now will be the WWE Ultimate Edition 13 Hogan. 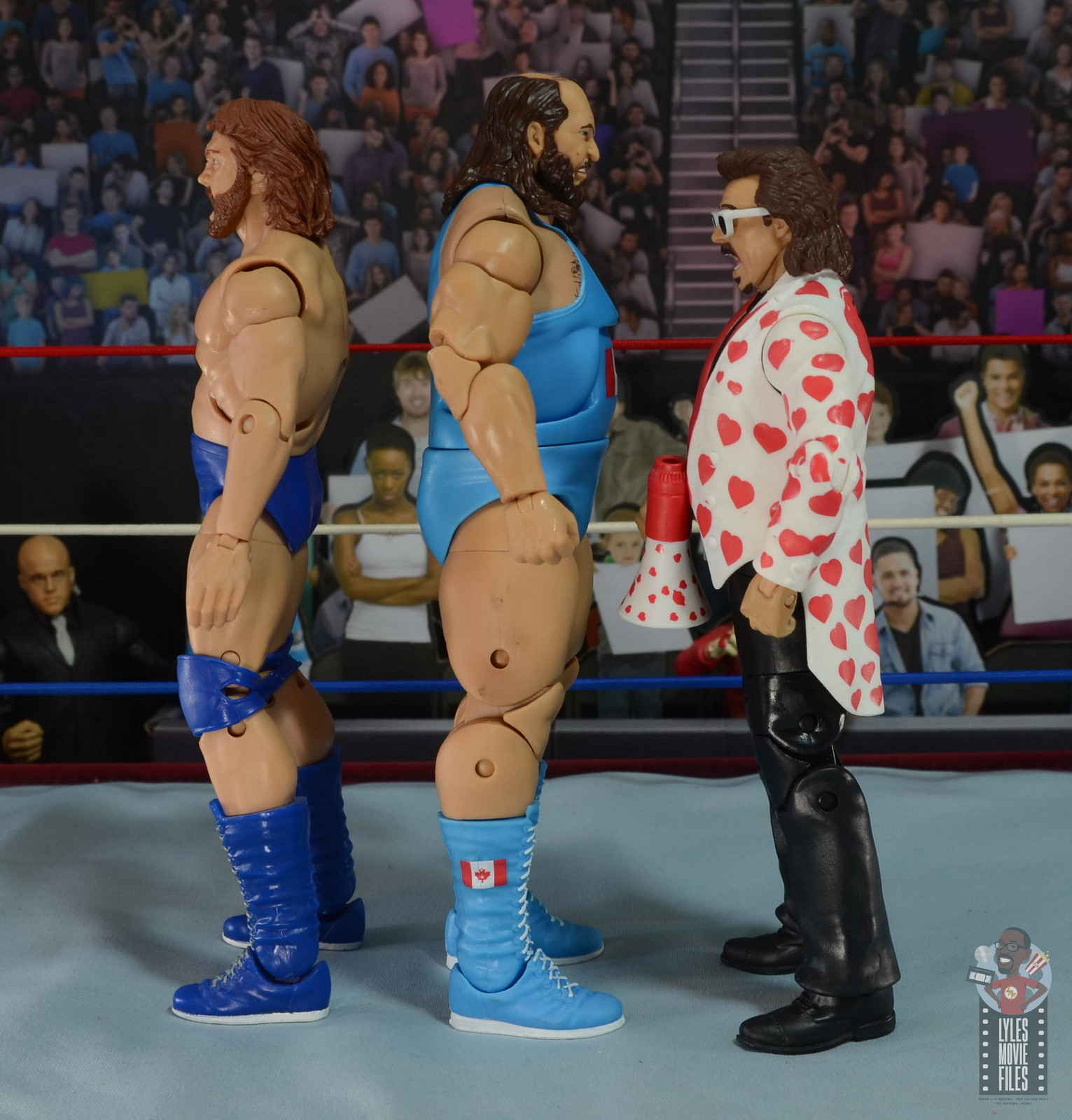 Paint:  We’ve gotten most of Earthquake’s signature looks now, but this light blue attire was his preference. This figure has the added detail of the Canadian flag, which he wore from Survivor Series 1989 until a little after the 1990 Royal Rumble. This gives Mattel some leeway to do one final WWF Earthquake without the flag.

The paintwork is clean. Mattel nailed the light blue of the outfit. The white of the Canadian flag could have used one or two more applications as the blue is fading through.

And on a small side note, I don’t give Mattel enough credit for the paintwork on the laces, which at times probably feels like it’s more trouble than it’s worth. 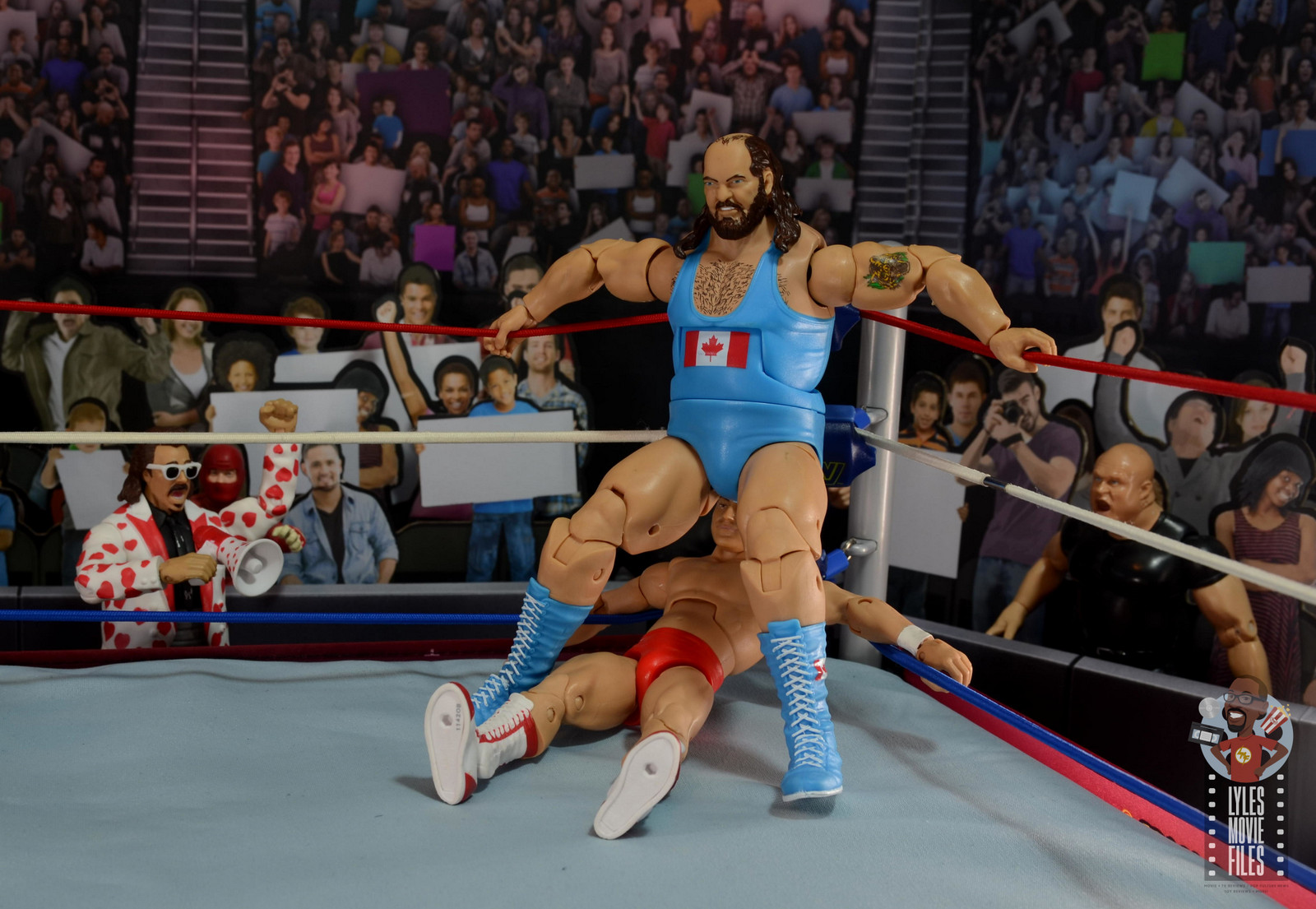 You probably notice the torso has a different paint than the arms and legs, which is annoying although it’s been a consistent issue with the previous Earthquake figures.

Articulation:  Earthquake was a powerhouse brawler who relied on slow charging power moves. His repertoire wasn’t as extensive as a Ted DiBiase or Mr. Perfect, but he was very effective in overwhelming his opponents quickly. 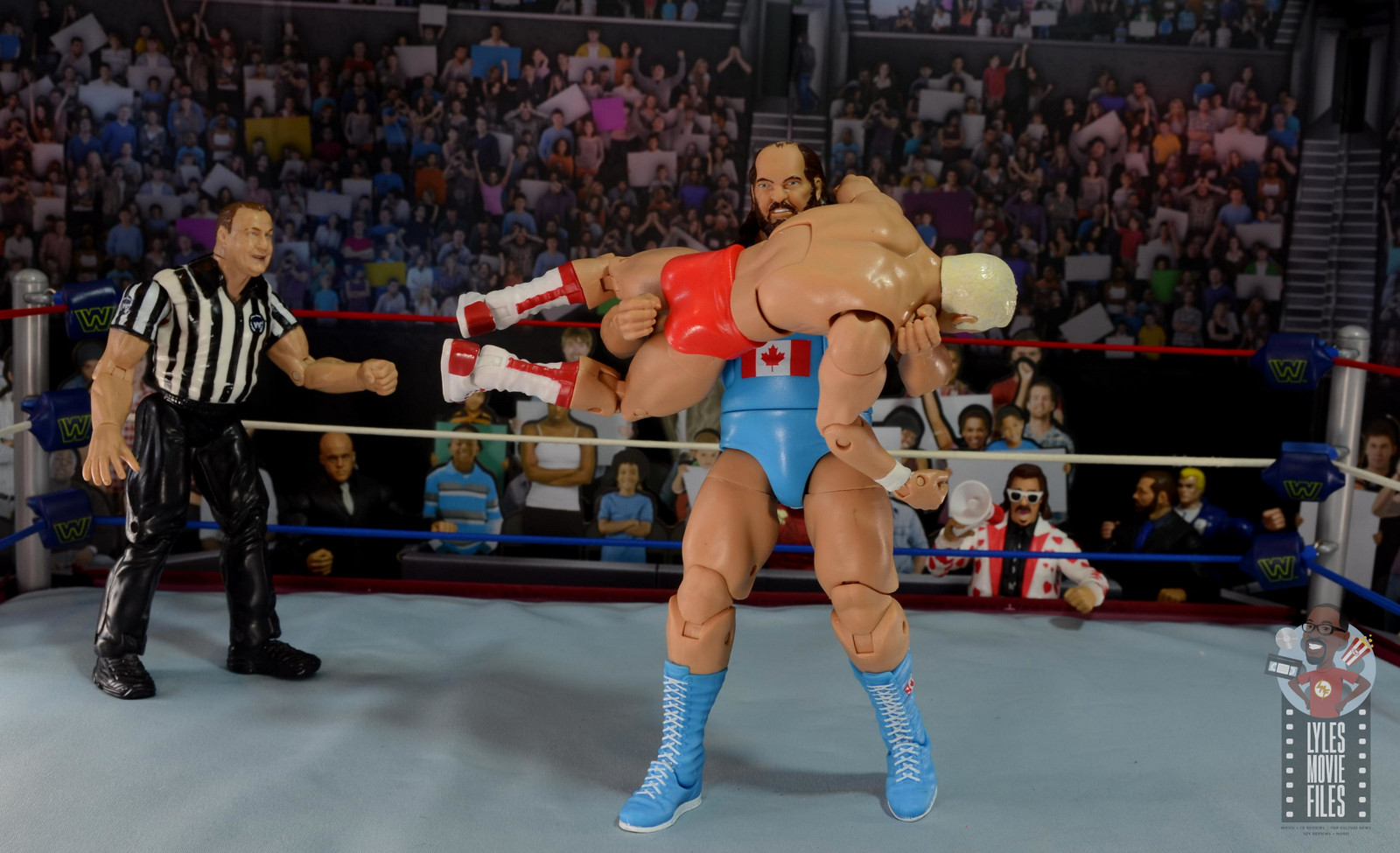 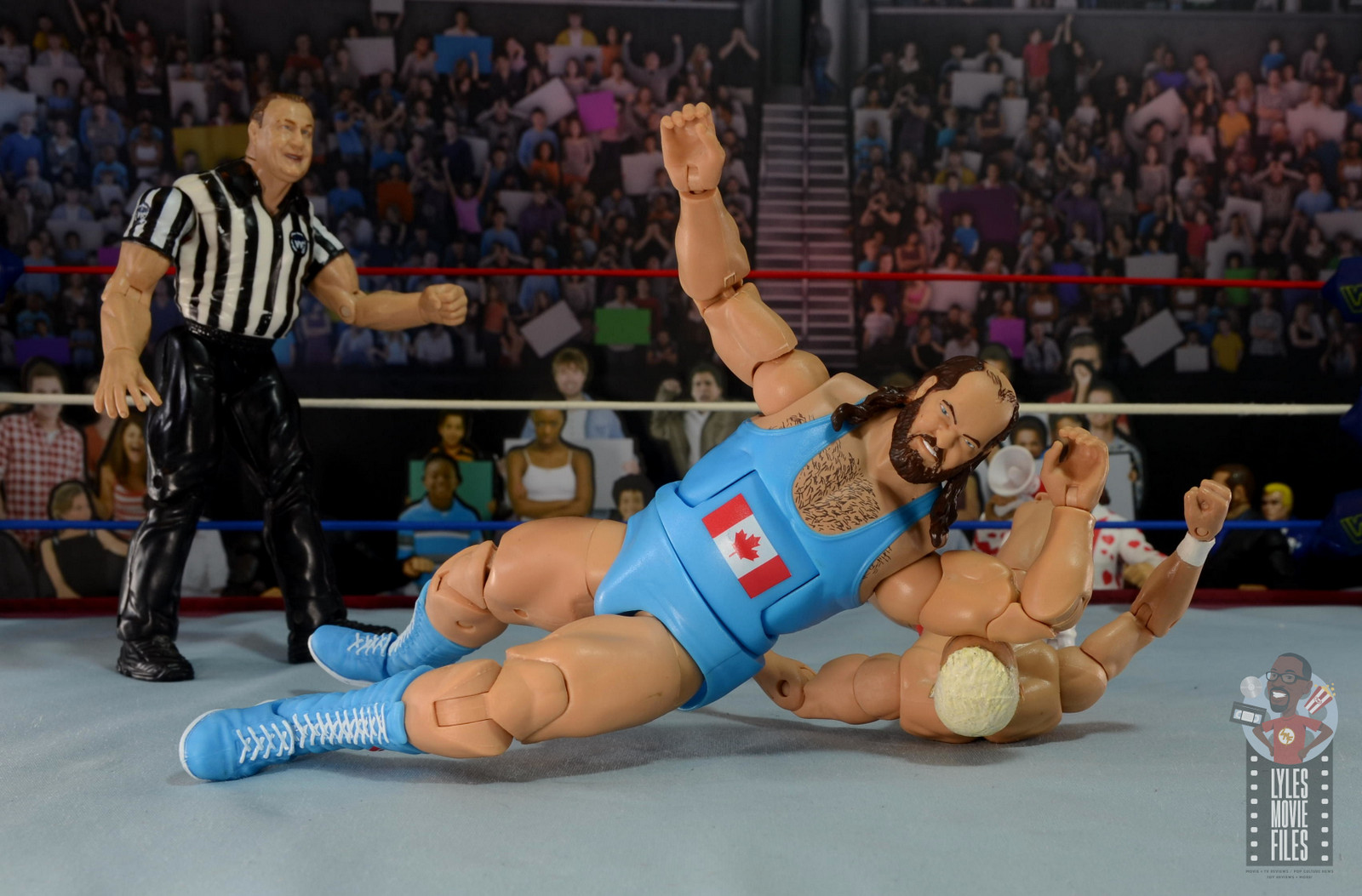 This thicker body and legs allow Earthquake to hit some deep poses and provides him with a strong center of balance. That’s useful for his powerslams though he still can’t hit a Camel Clutch. 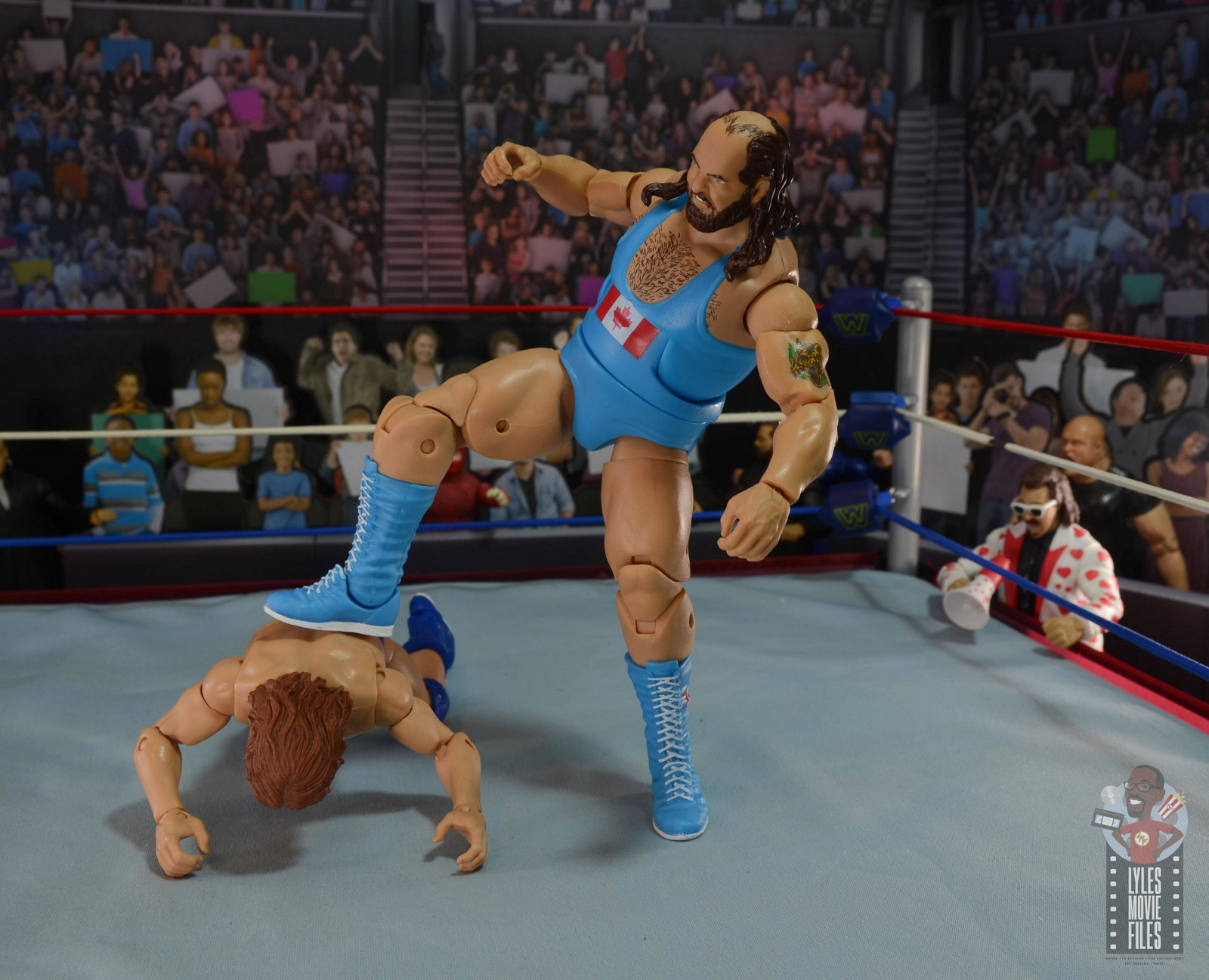 In addition to the correct additional height, Earthquake gets another upgrade with double-jointed elbows. 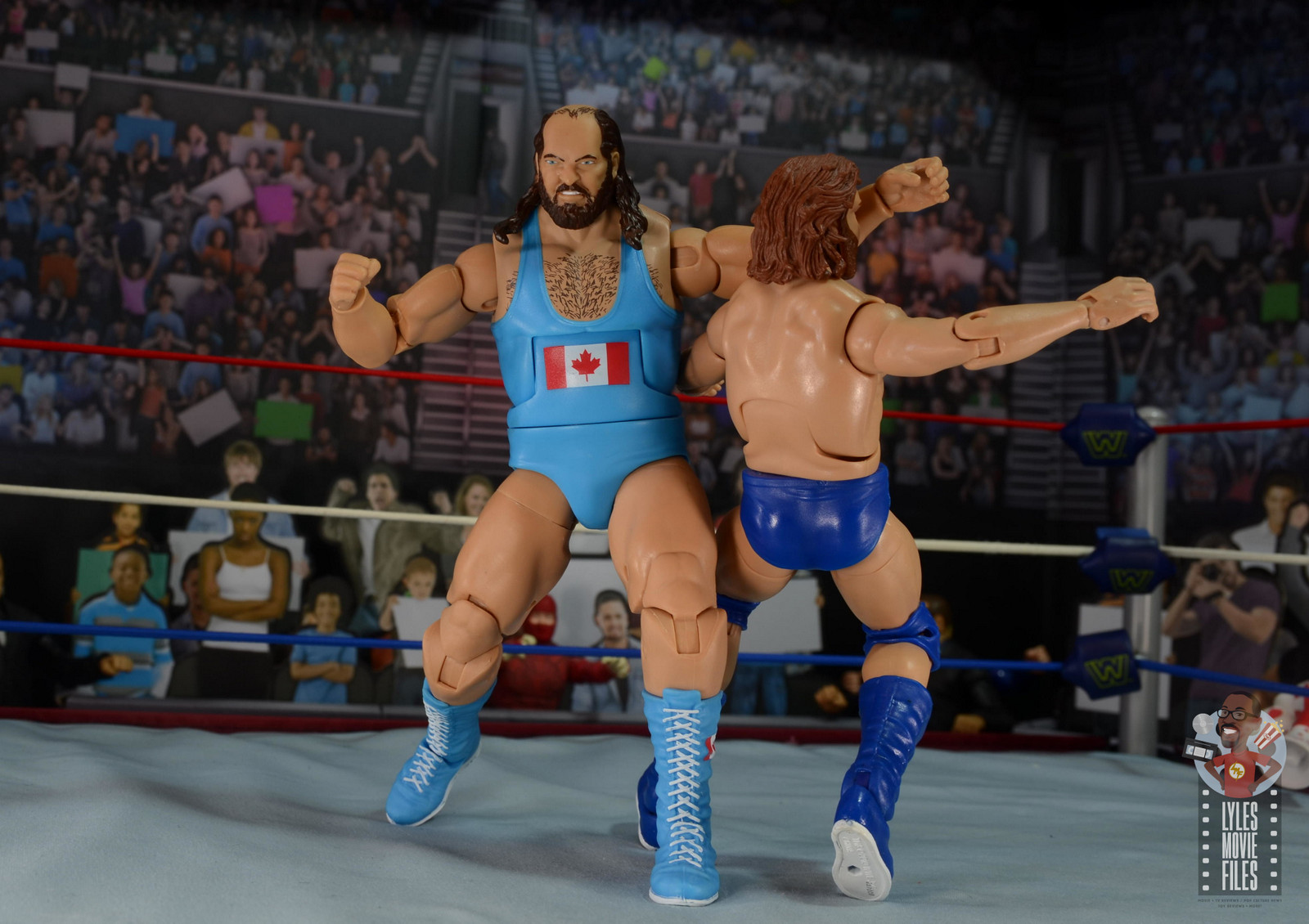 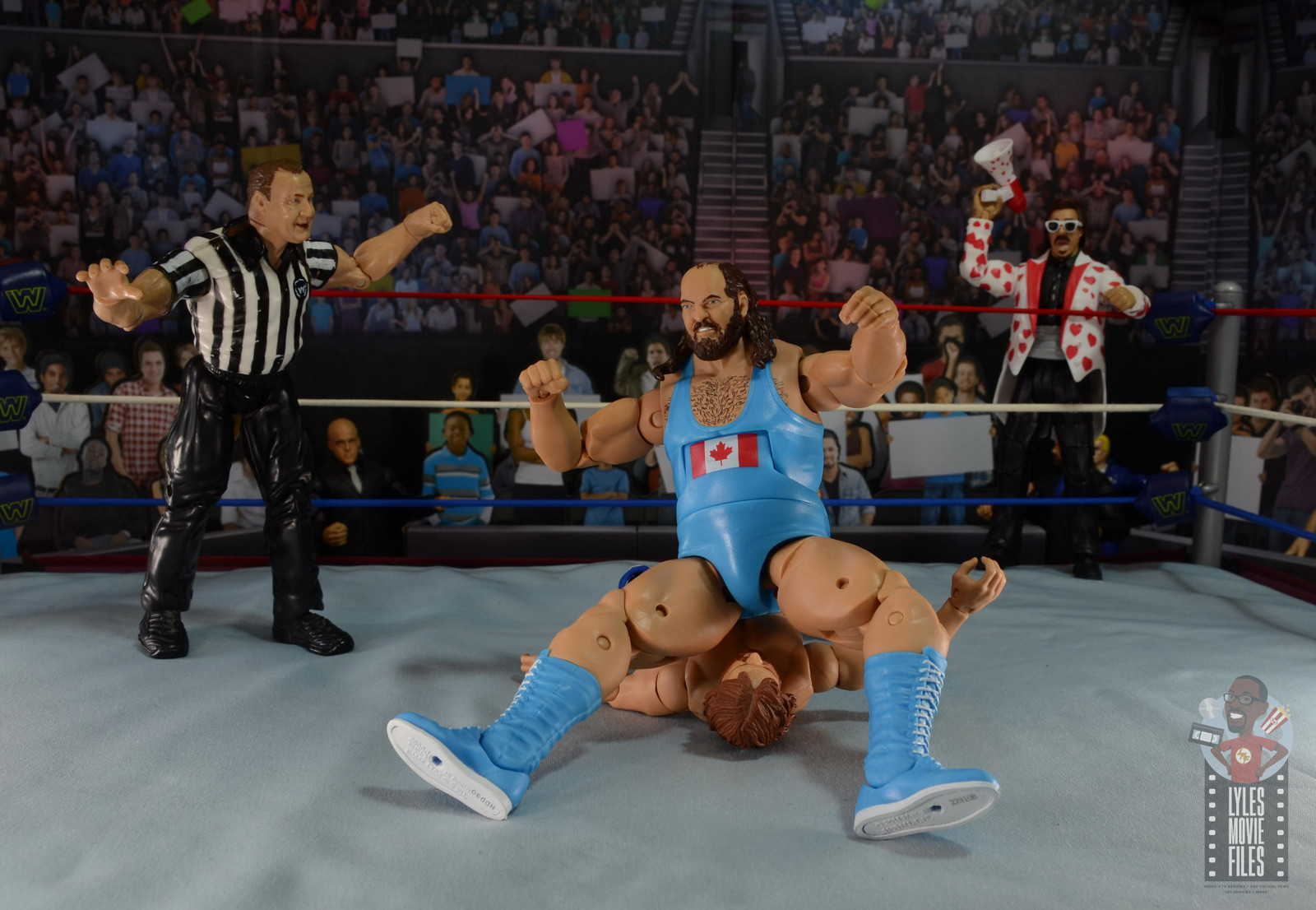 Accessories:  Earthquake doesn’t have obvious accessory options and for the BAF roll-out it’s not as essential. He comes with a swappable pair of gripping hands. 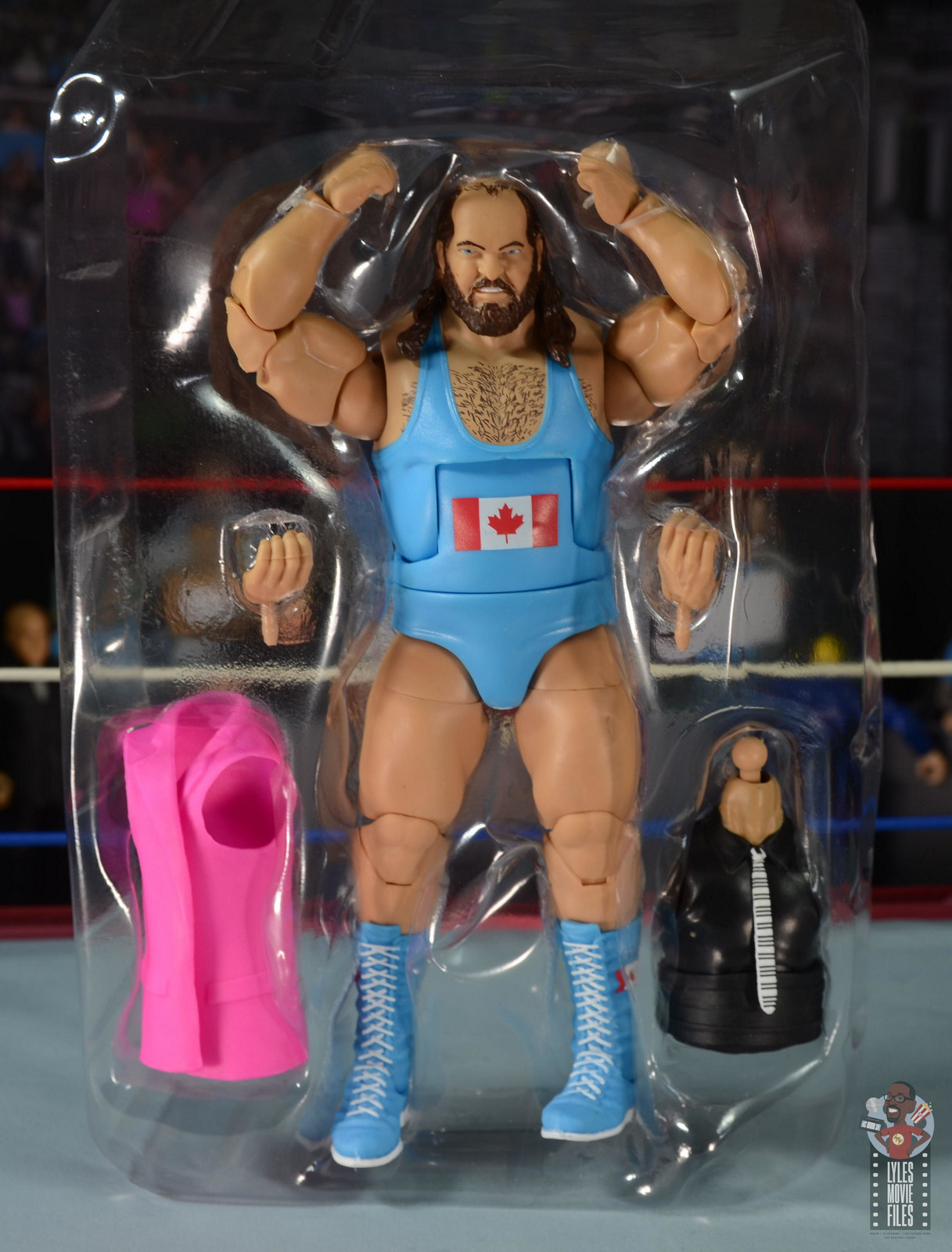 More importantly, he comes with the torso and jacket for the Build-A-Figure Jimmy Hart.

Worth it?  Remember how I didn’t give Mattel any grief about the lack of accessories? That’s mainly due to this BAF wave still clocking in at the $19.99 price point.

Mattel previously charged a little extra for those BAF waves and this nicely balances that out. Considering other lines are inching above $22.99 it was nice to get a figure with the add-on incentive for the older price.

I’m mainly dinging Earthquake for the Royal Rumble appropriate attire even though this isn’t his signature look. That means a double dip is necessary to some degree. Otherwise, this is a great improvement on previous Earthquake figures. 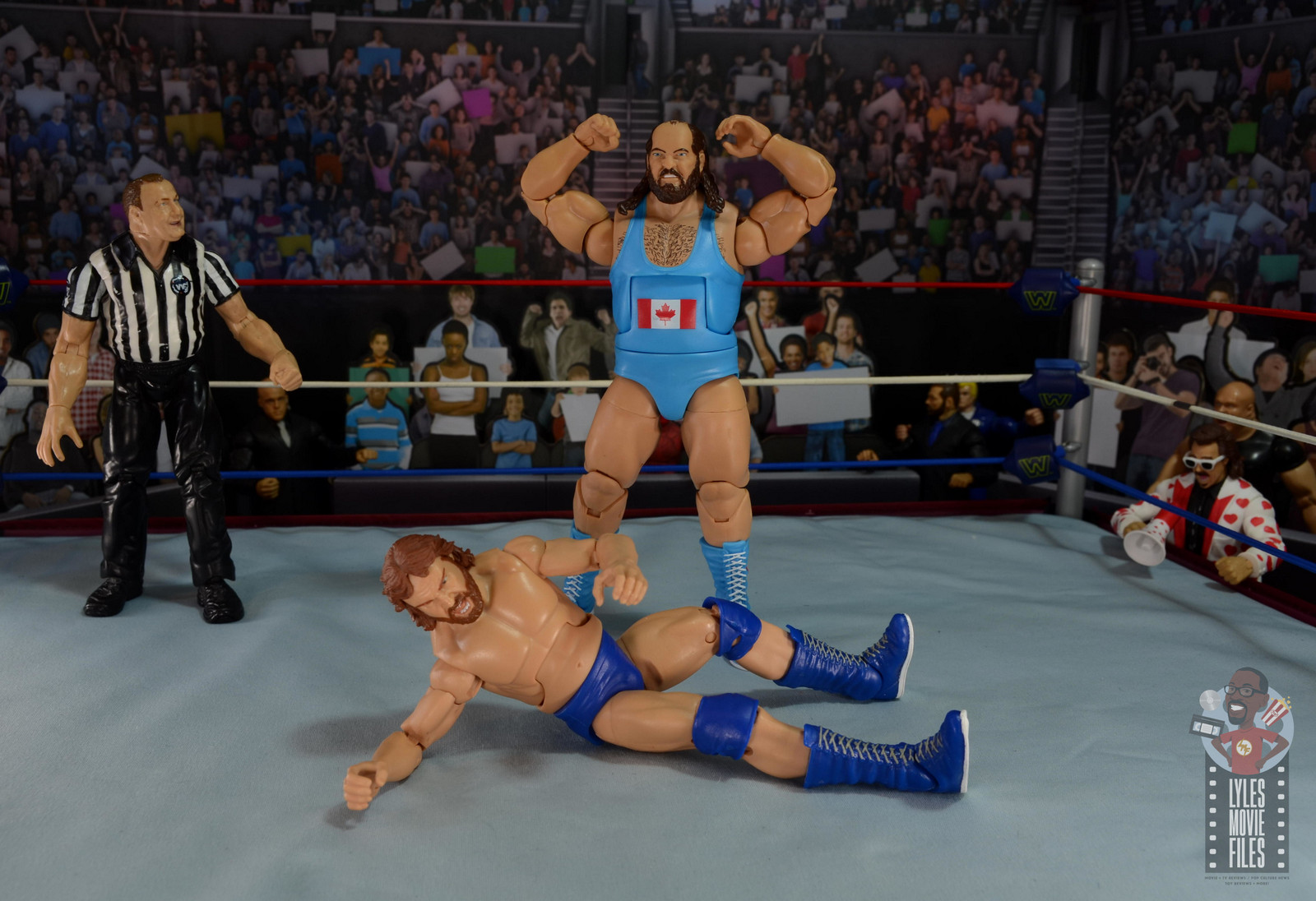 Where to get it?  I’m pretty sure this wave is a Target exclusive so that’s your best option. He’s sold out on Target’s website right now but keep checking as they restock frequently.