The normal pattern for an 80s heel in the WWF was to demolish the mid-tier faces and get vanquished by Hulk Hogan. After a few middling feuds, they’d go to have a shocking face turn and potentially a career revival. Big Boss Man followed that pattern to a tee going from one of Hogan’s strongest challengers to one of the more beloved faces of the WWF’s 90s scene.

Mattel previously released a Twin Towers heel version of Bossman a while ago and that figure goes for stupid money online. This was a clever means of getting Boss Man back out to collectors who missed him and providing a legit reason for longtime collectors to double dip. Let’s see if this version of Boss Man deserves hard time or a box of Krispy Kremes.

Packaging: Mattel did its traditional bi-annual packaging change. It’s a lot busier than the previous setup and I like the fresh mix of colors incorporating blue and black to refresh the white and red color schemes.

The plastic window is somewhat smaller with this setup. You’re still able to see everything though I wonder what MOC collectors think of it. Shifting packages means the reference photo on the right side is gone. Thankfully, the name is big so you can determine the figure from a higher peg view.

Boss Man’s photos have a more focused look, which was an interesting choice since he tended to smile more during this period. The bio is basic, simply quoting the lyrics of his theme song, but it’s fine. 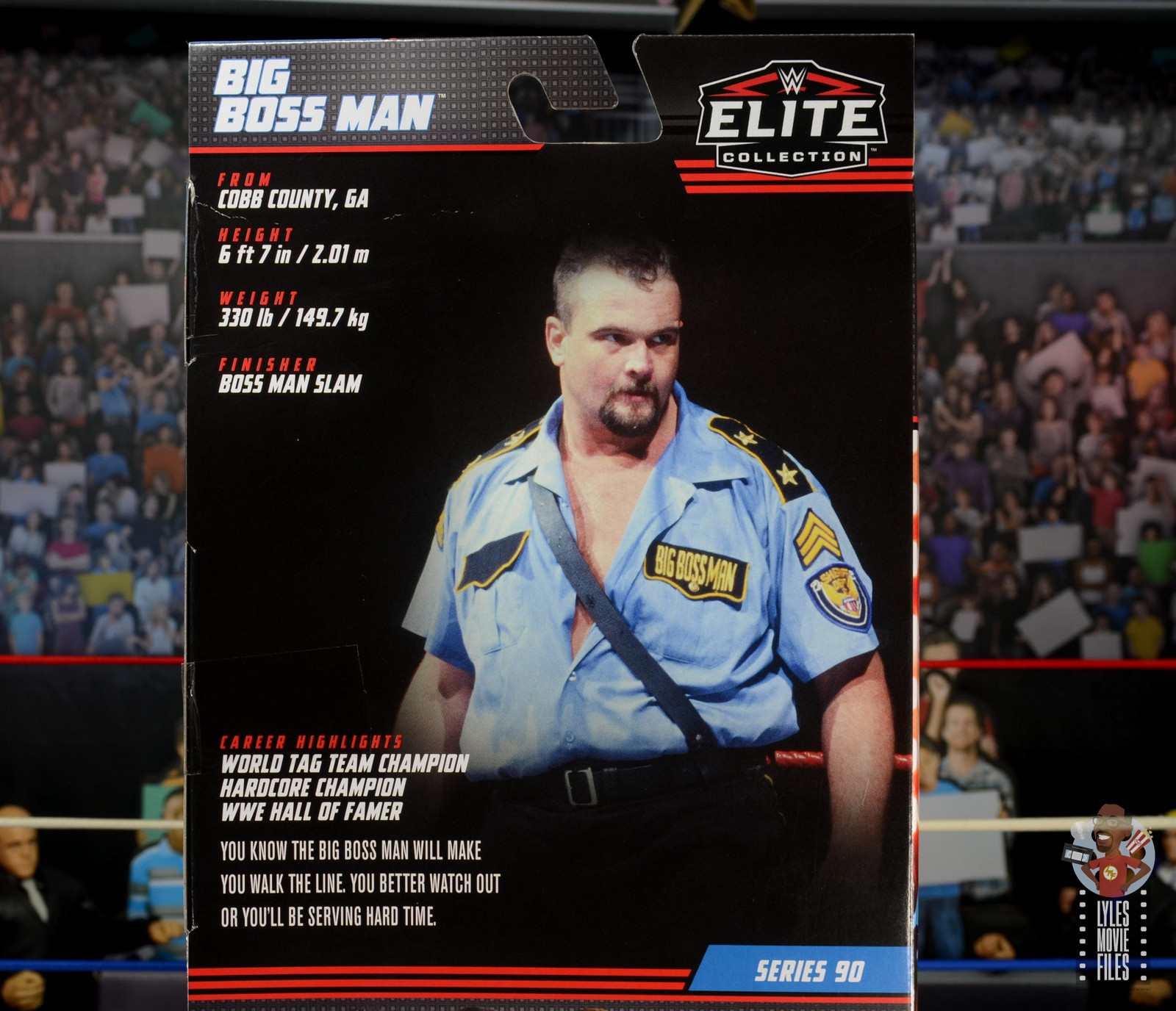 Likeness:  The first Big Boss Man had an OK likeness, but the True FX sculpting ensures a stronger likeness. It would have been great to get an additional portrait that features a sterner face. The smiling expression is definitely one that works for this era of Boss Man. 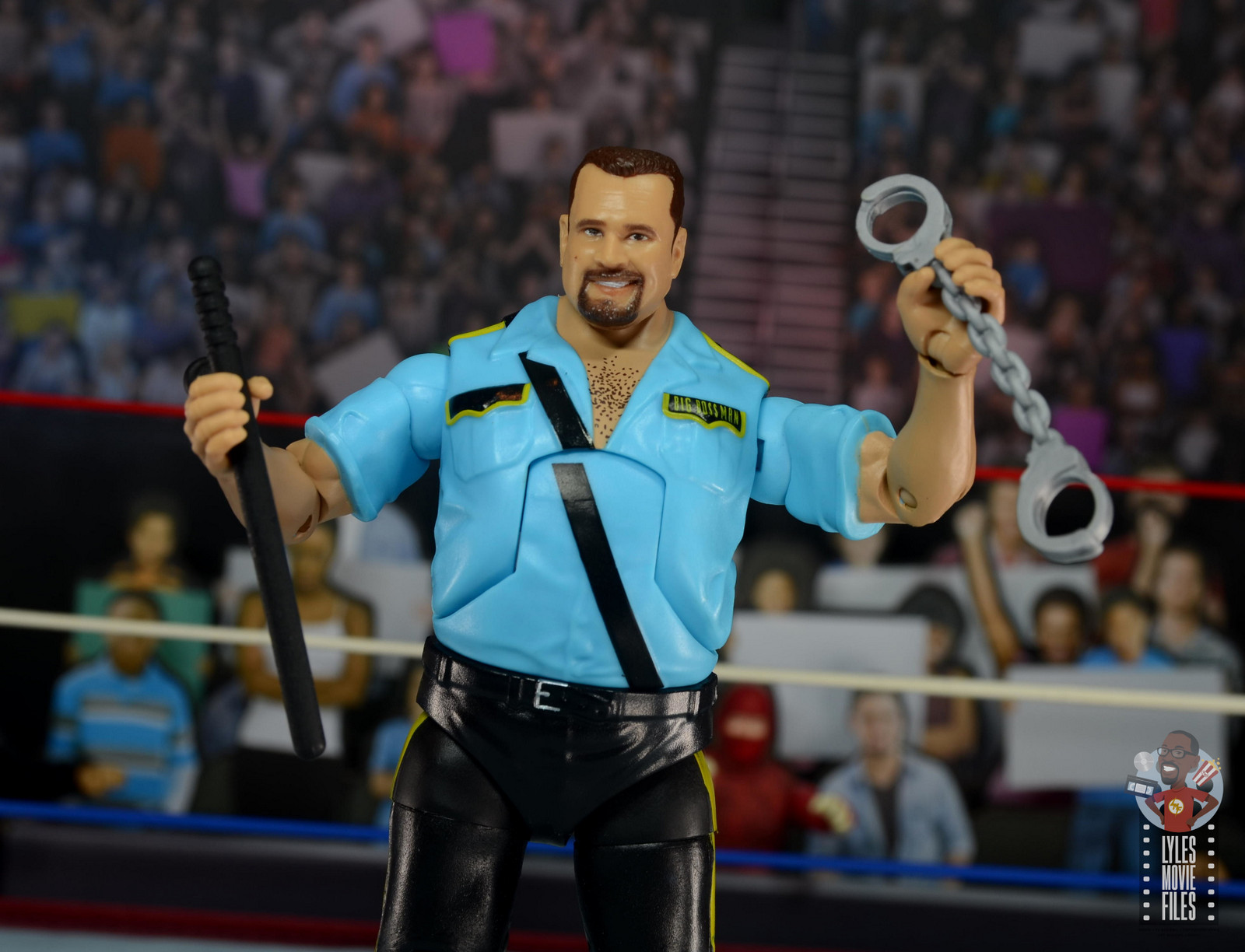 Originally, I thought this mold is the same as the previous Boss Man figure. I understood why Mattel would want to get some reuse of that mold. But it’s actually different with a wider collar and the shirt opened further down. It’s kinda wild that Mattel went through the trouble of making another Boss Man and not making the mold slimmer to reflect Boss Man cutting some weight from his early WWF days. 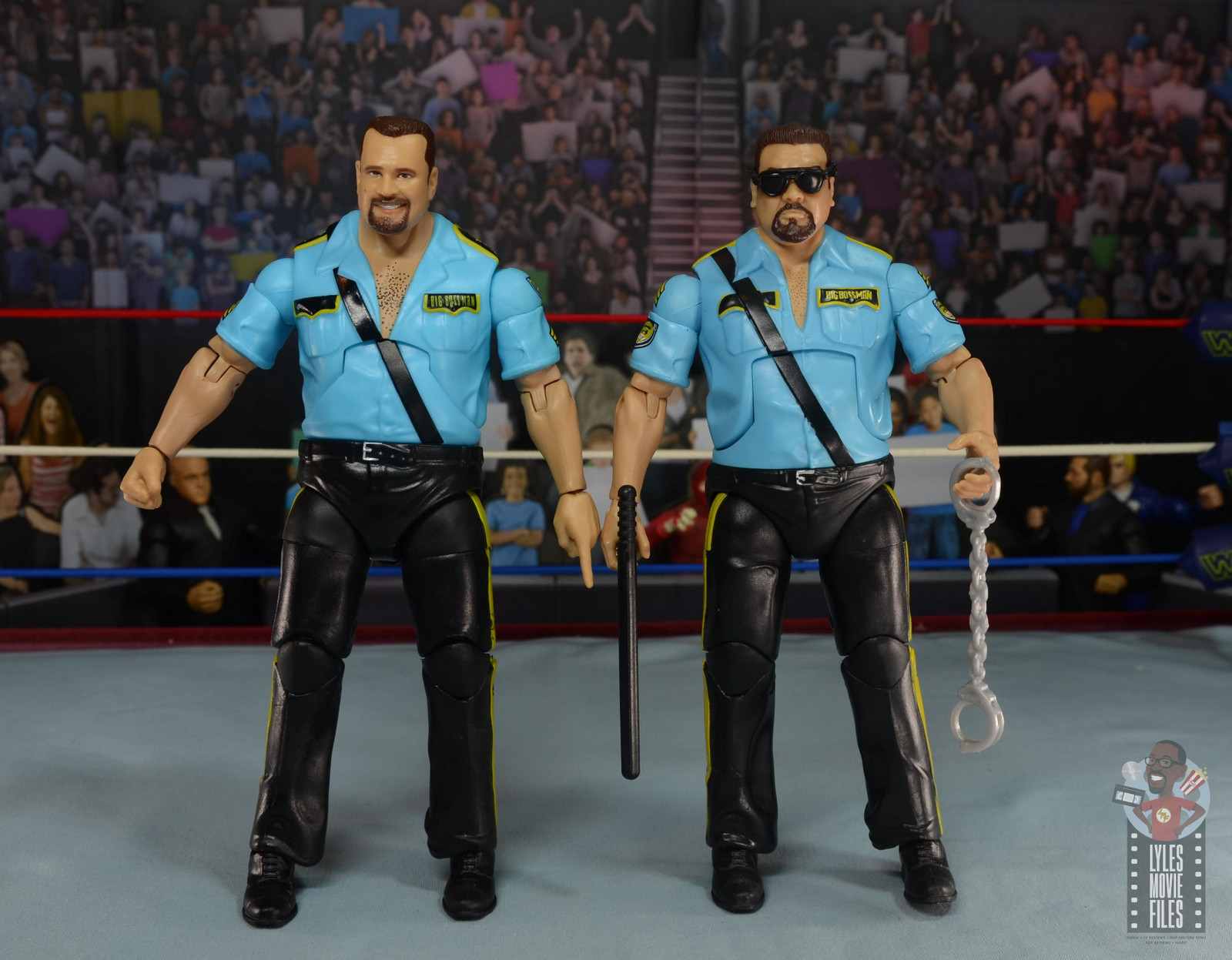 Scale:  Big Boss Man was a heavyweight at 6’7” so he’s not looking up at many dudes on the 90s WWF roster. 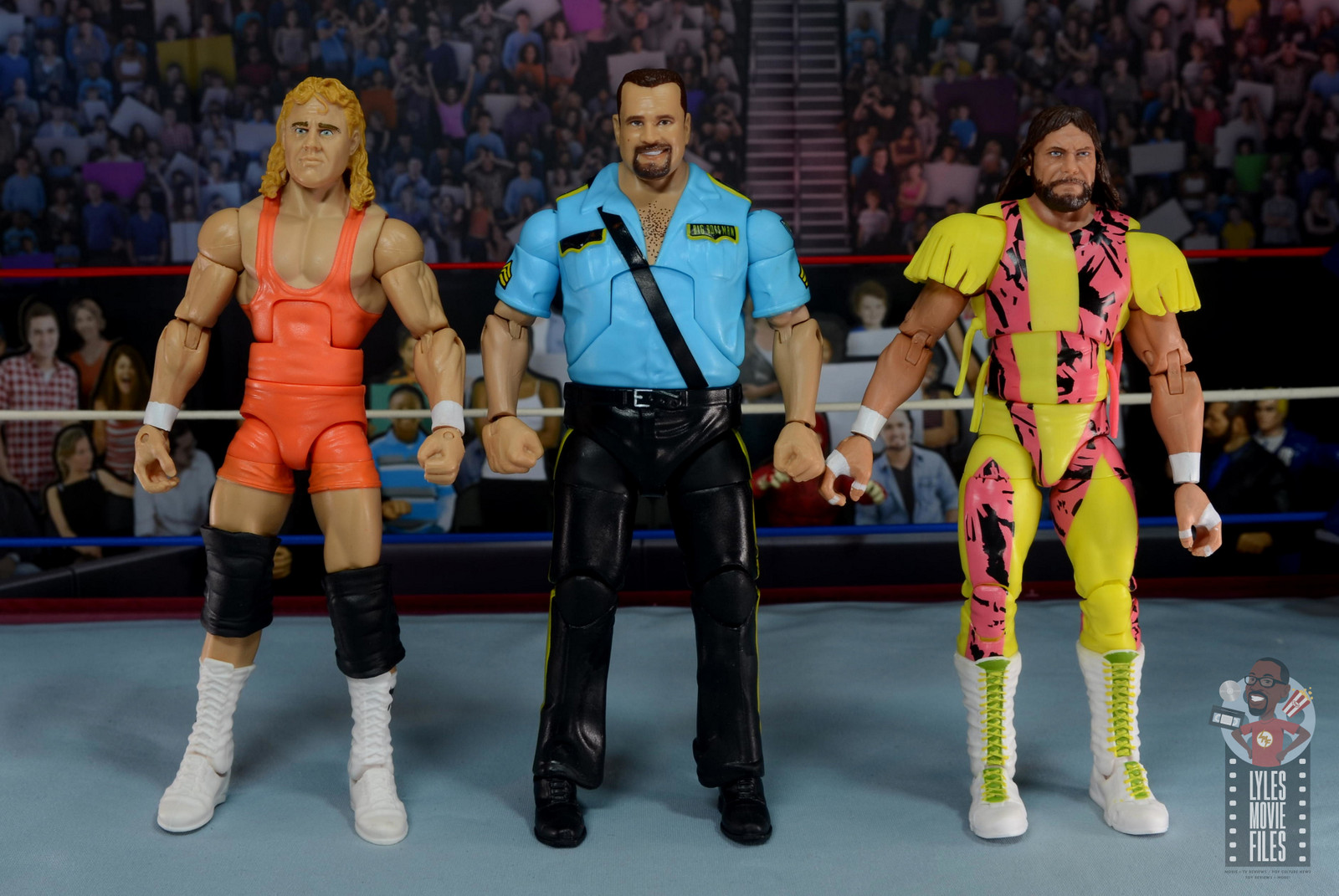 Mr. Perfect and Rick Rude were both 6’3″ while Ted DiBiase was 6’1″.  Mattel needs to fix the height of Mr. Perfect, but he’s in proper scale with the 6’2″ Randy Savage figure. 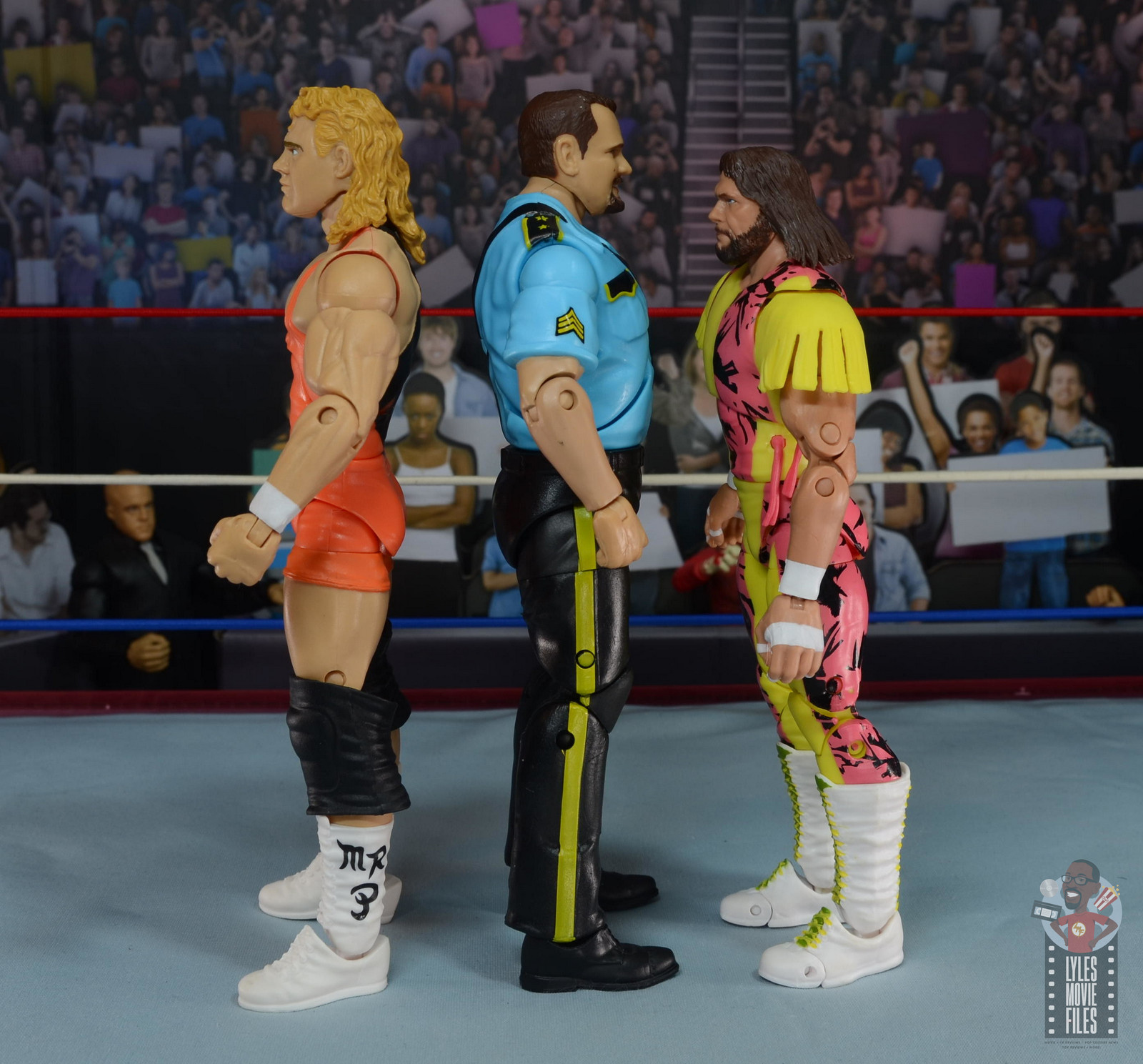 Paint:  Besides a random stray mark on the face, the paintjob is nice and clean. Even in areas that are traditionally tricky like the yellow lining of the shirt pockets and the pant stripes.

The paintwork on Boss Man’s hair and goatee is very crisp and the inkjet painting helps create sharper looking and realistically painted eyes. 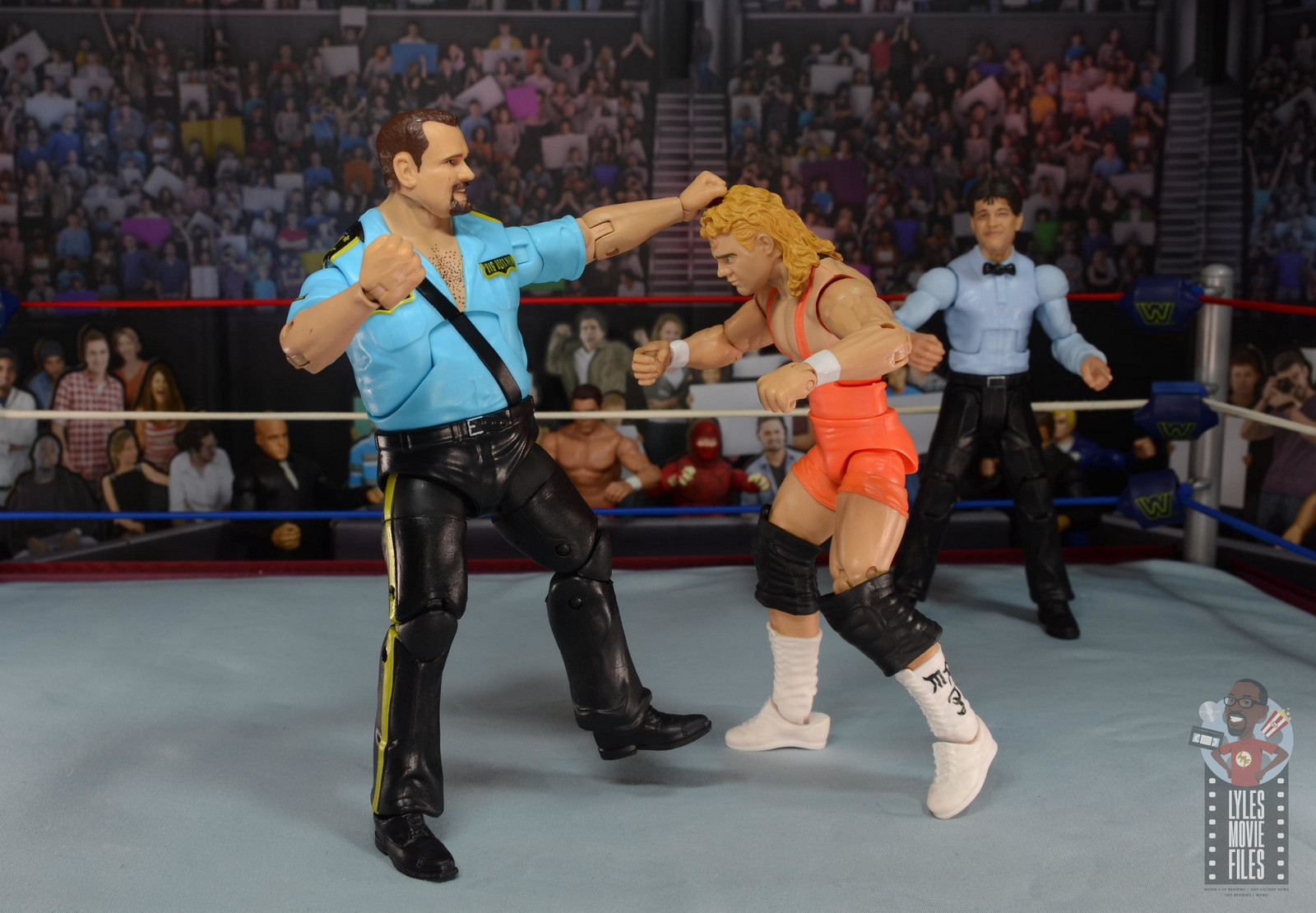 Articulation:  Since this is largely a mold reuse, Boss Man doesn’t get to benefit from the addition of double-jointed elbows like most figures now. 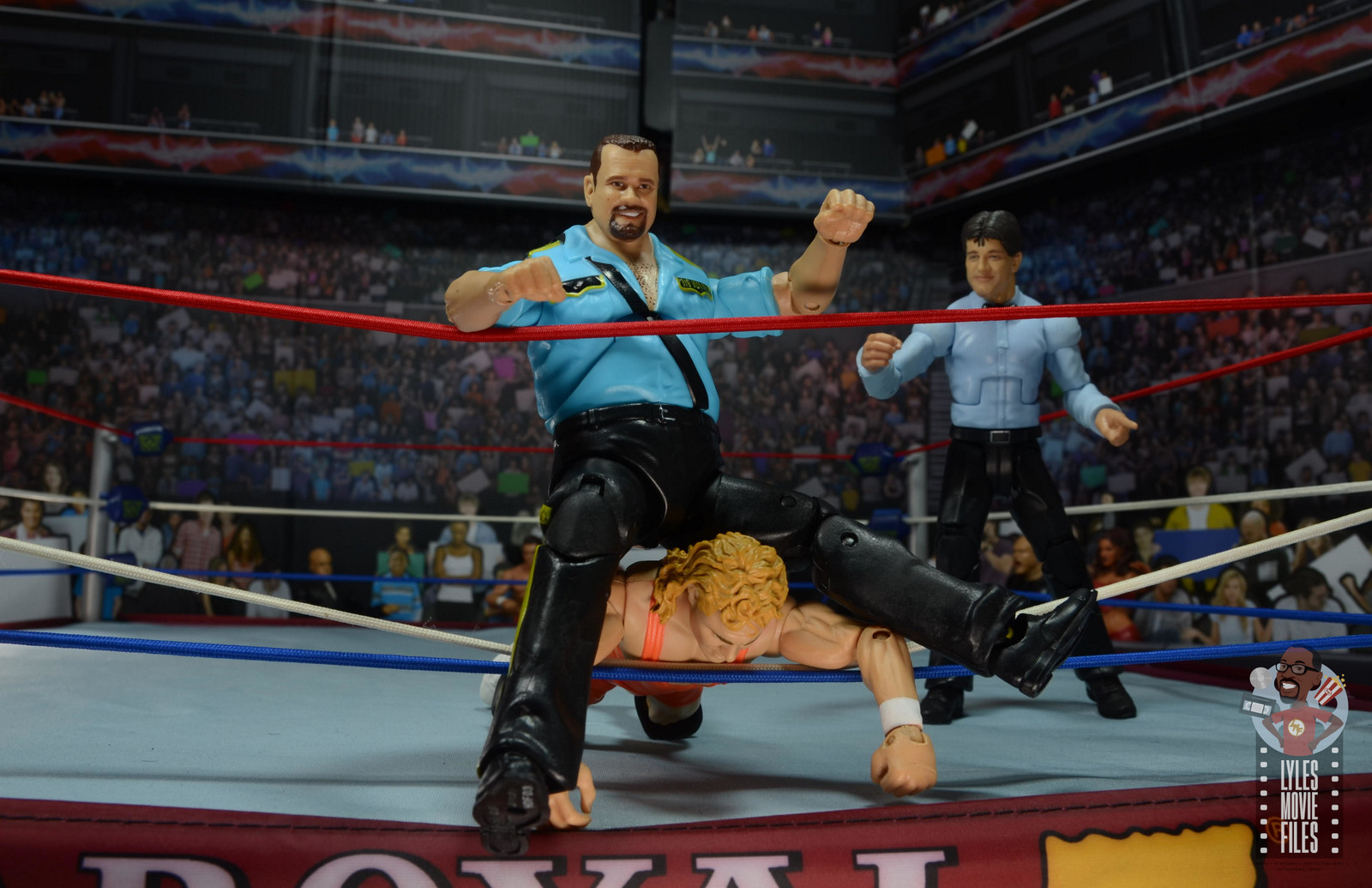 This is a pretty fun figure to maneuver though as it’s easy to pull off most of Boss Man’s moves. 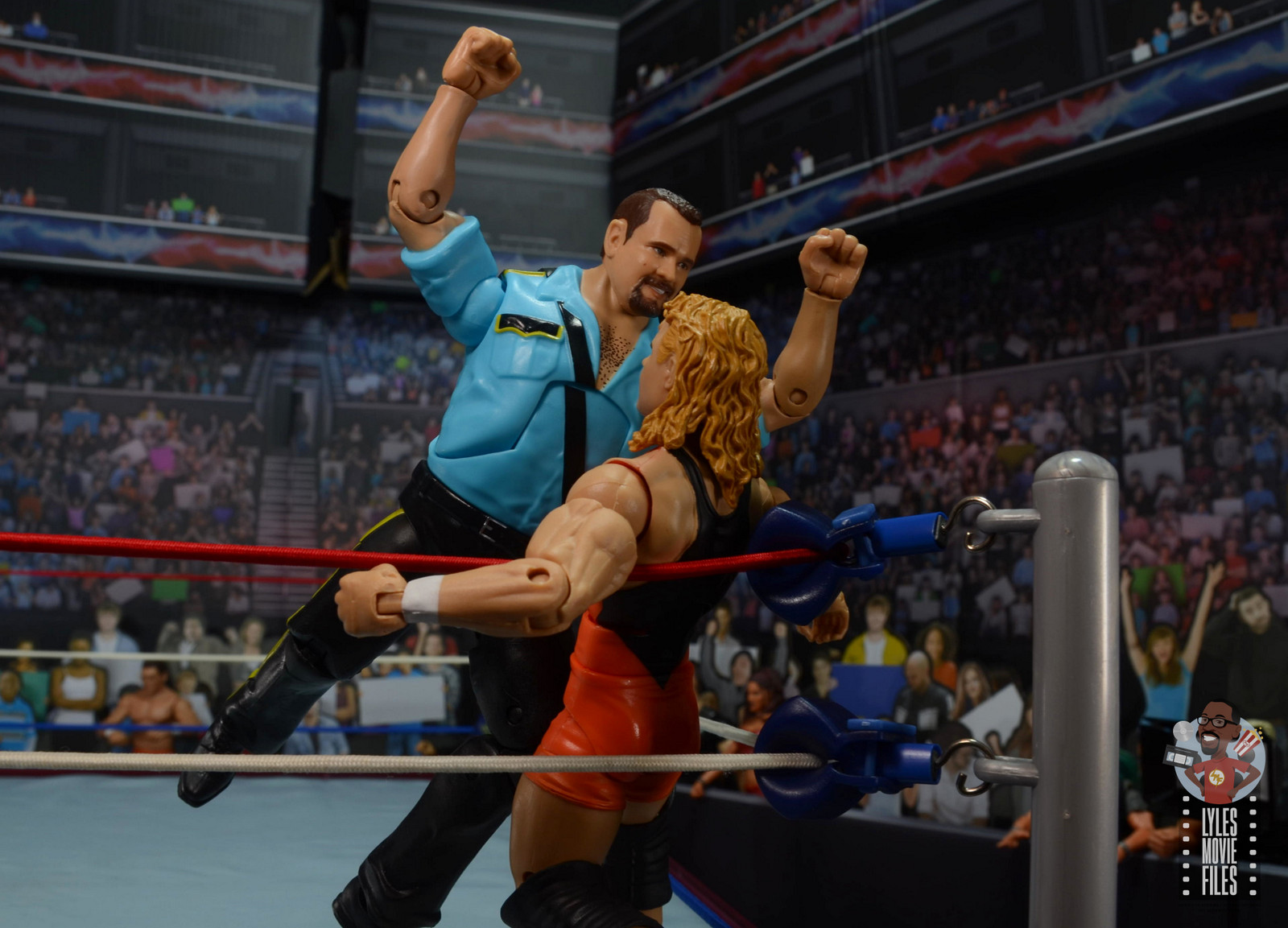 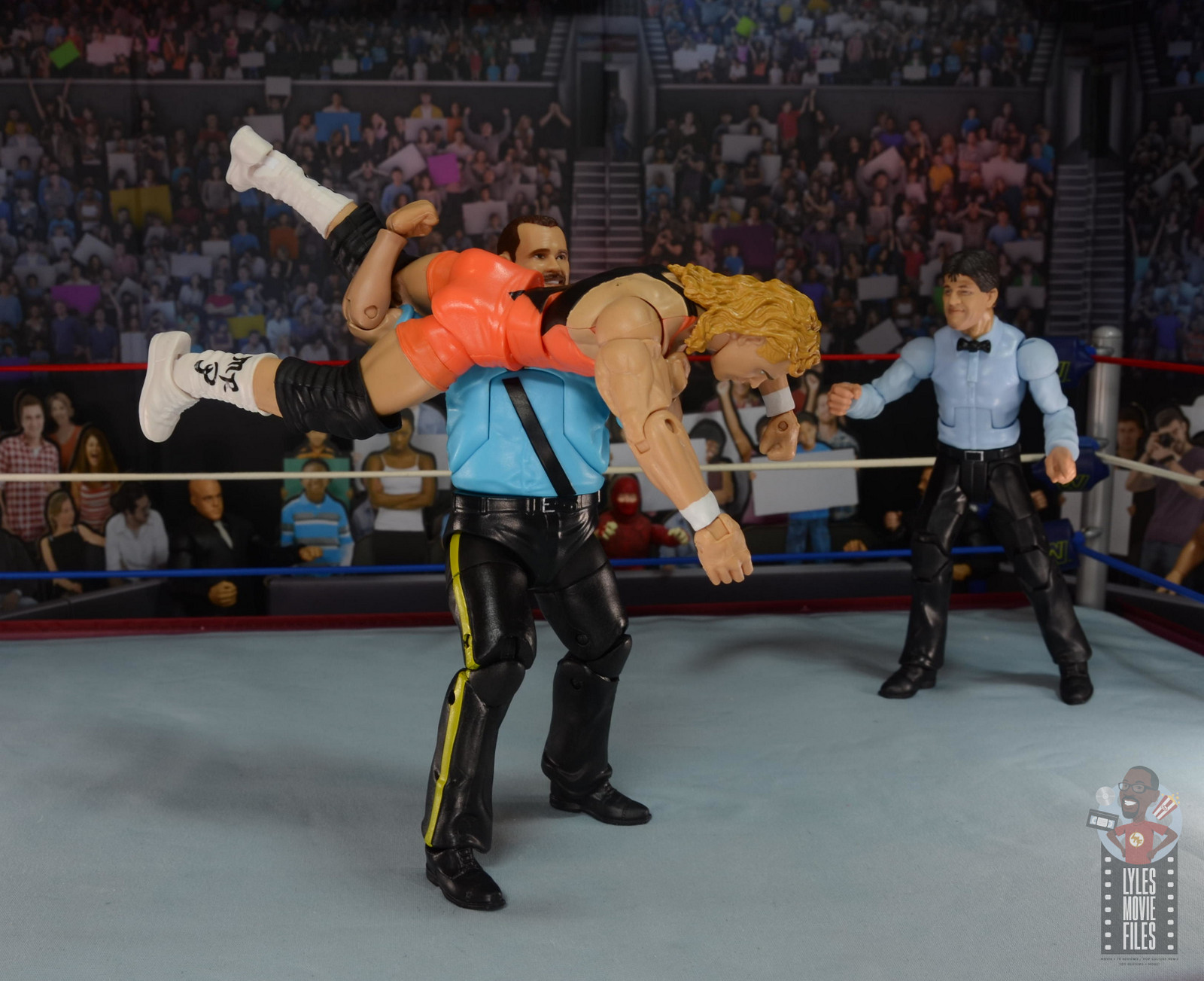 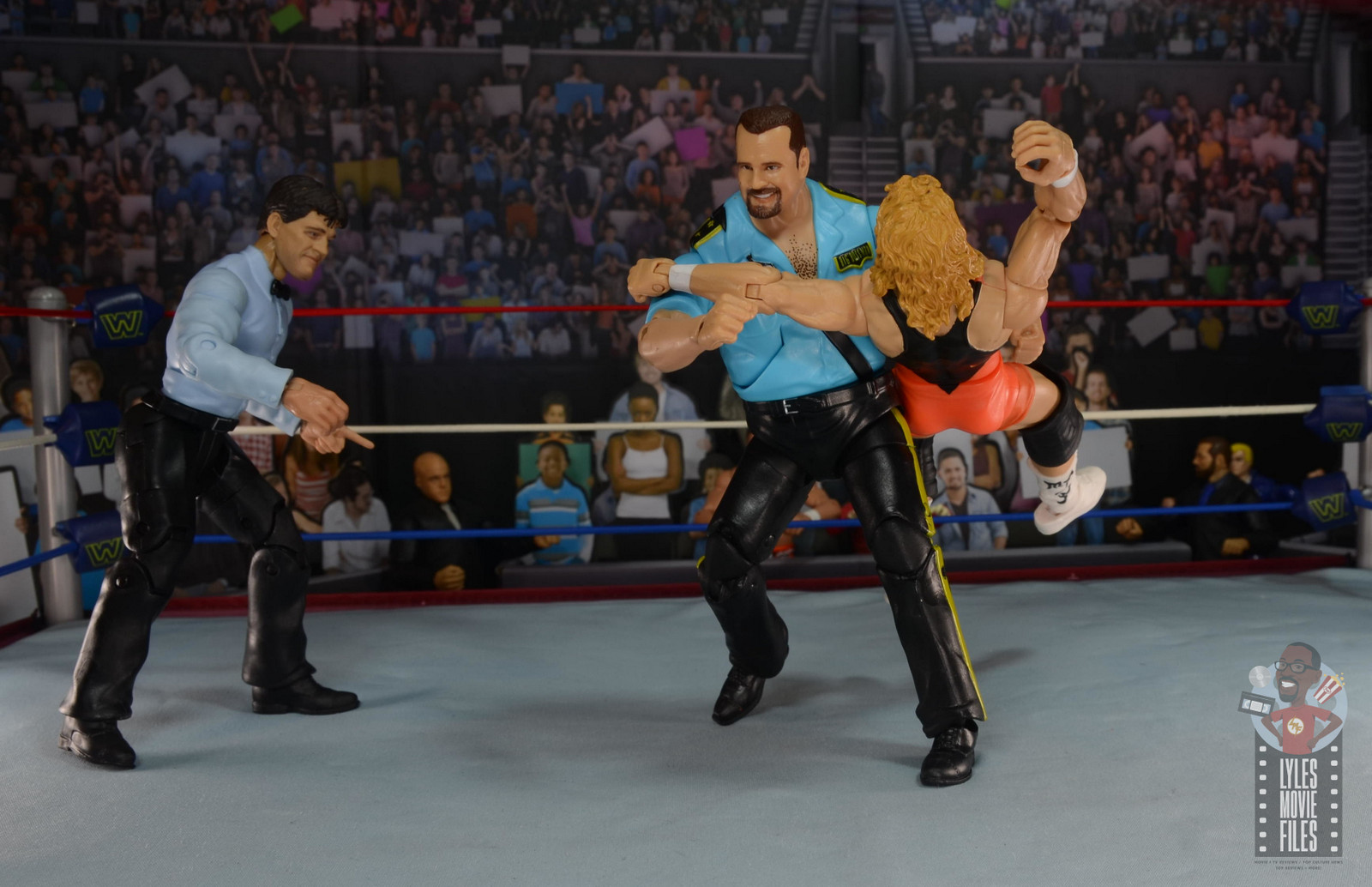 He’s got some holdover accessories with the nightstick and handcuffs. These are both necessary Bossman accessories although Mattel still hasn’t been able to make the nightstick fit snuggly in the hands. The cuffs are made of a very pliable material so they’re easy to use on other figures. 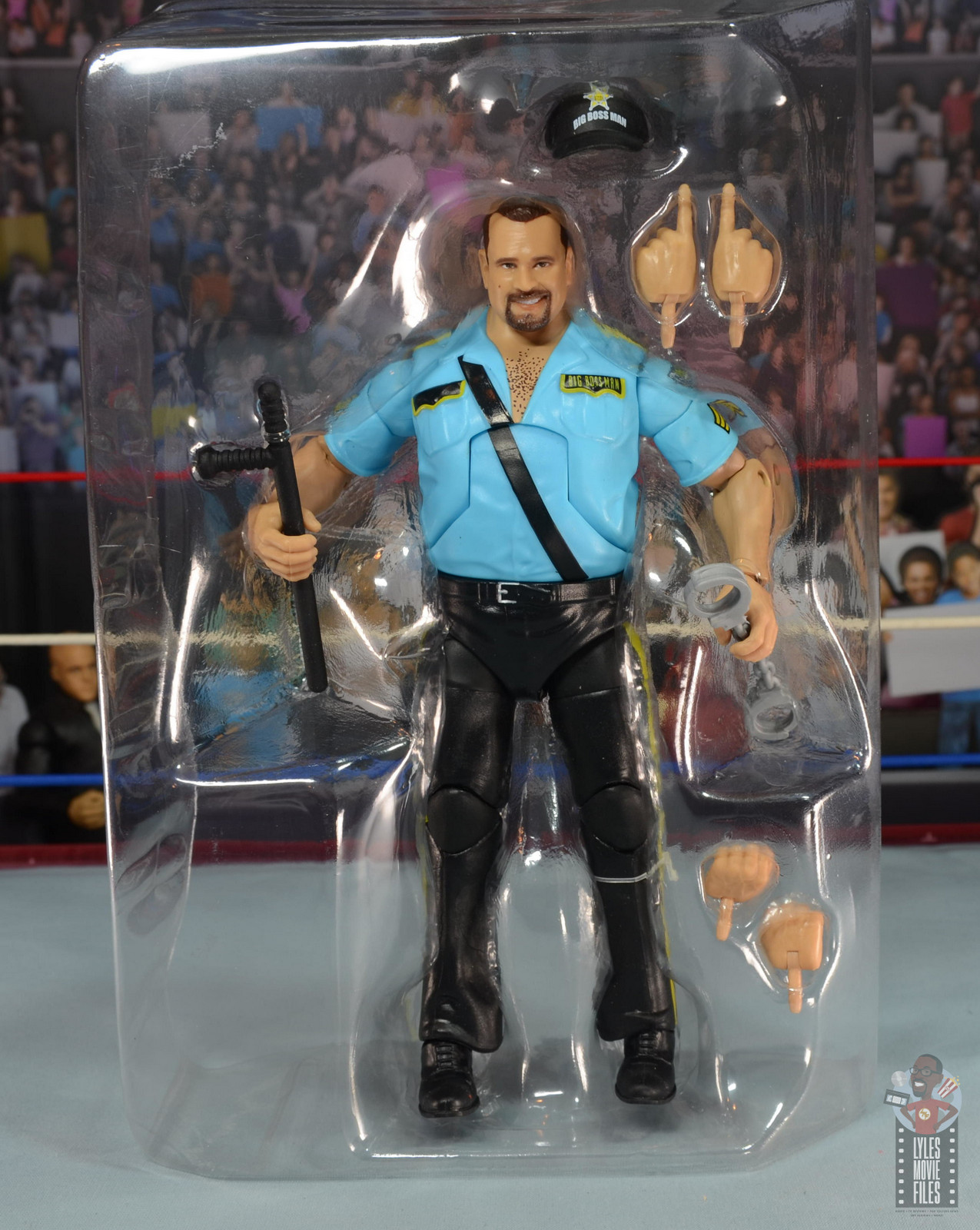 Finally, he comes with a Big Boss Man hat, which was an addition he added to his ring gear upon his face turn. The detail is nice although the star needed another coat or two of yellow paint. 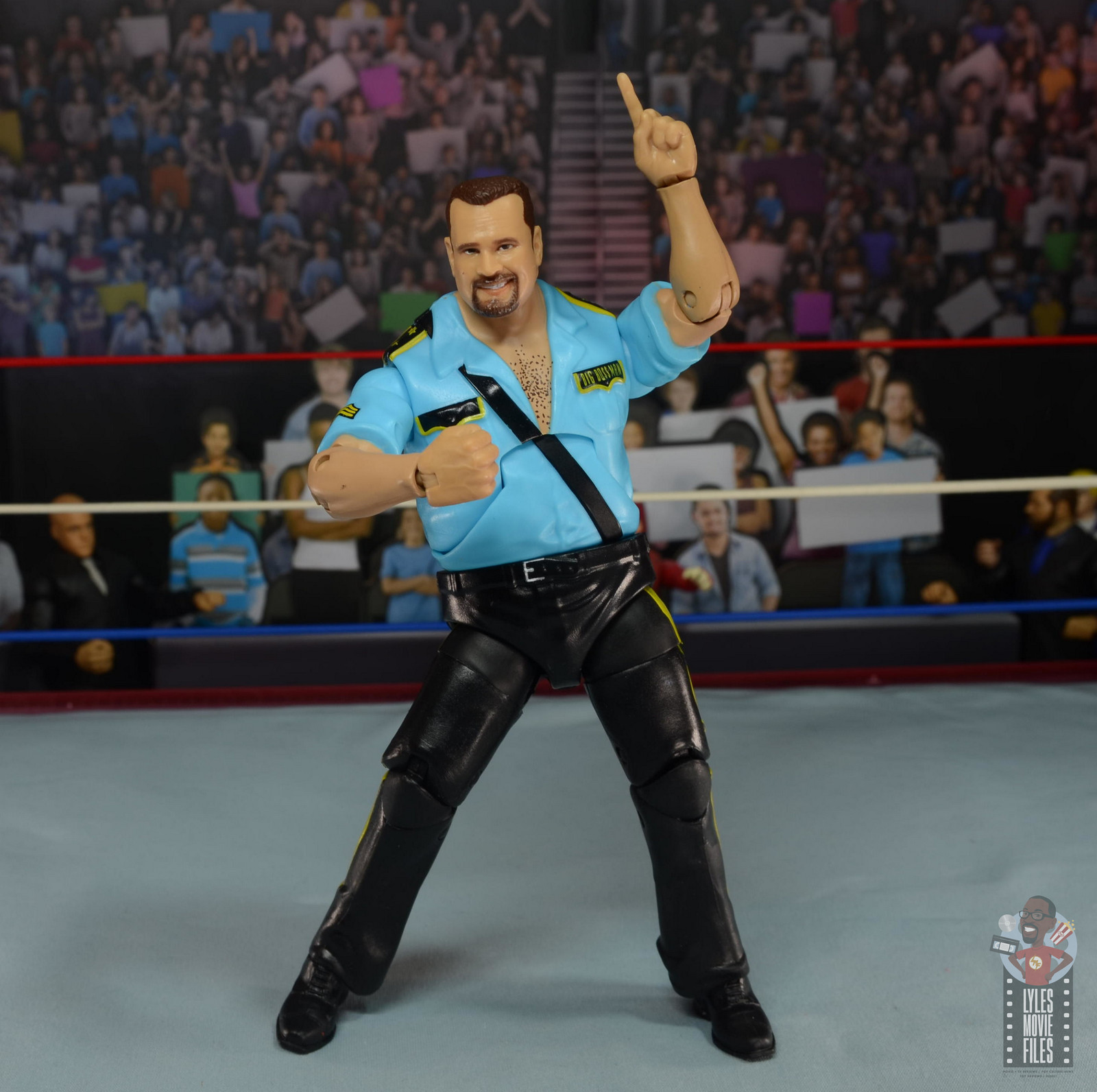 Worth it?  The WWE figures are now bumped up to $21.99. The accessories help a little, but for the price hike, Mattel needs to add double-jointed elbows for even older figures. Or another portrait for a figure that’s 90% reuse. Boss Man is probably going to be one of those figures that’s going to be higher the longer you wait. I’ve got no such concerns for the modern stars.

I don’t mind the still larger mold so much as I’m annoyed Mattel couldn’t figure out a way to implement double-jointed elbows here. An extra head sculpt would have helped improve the value too. Still, it’s nice to have a dedicated face Boss Man in the collection. 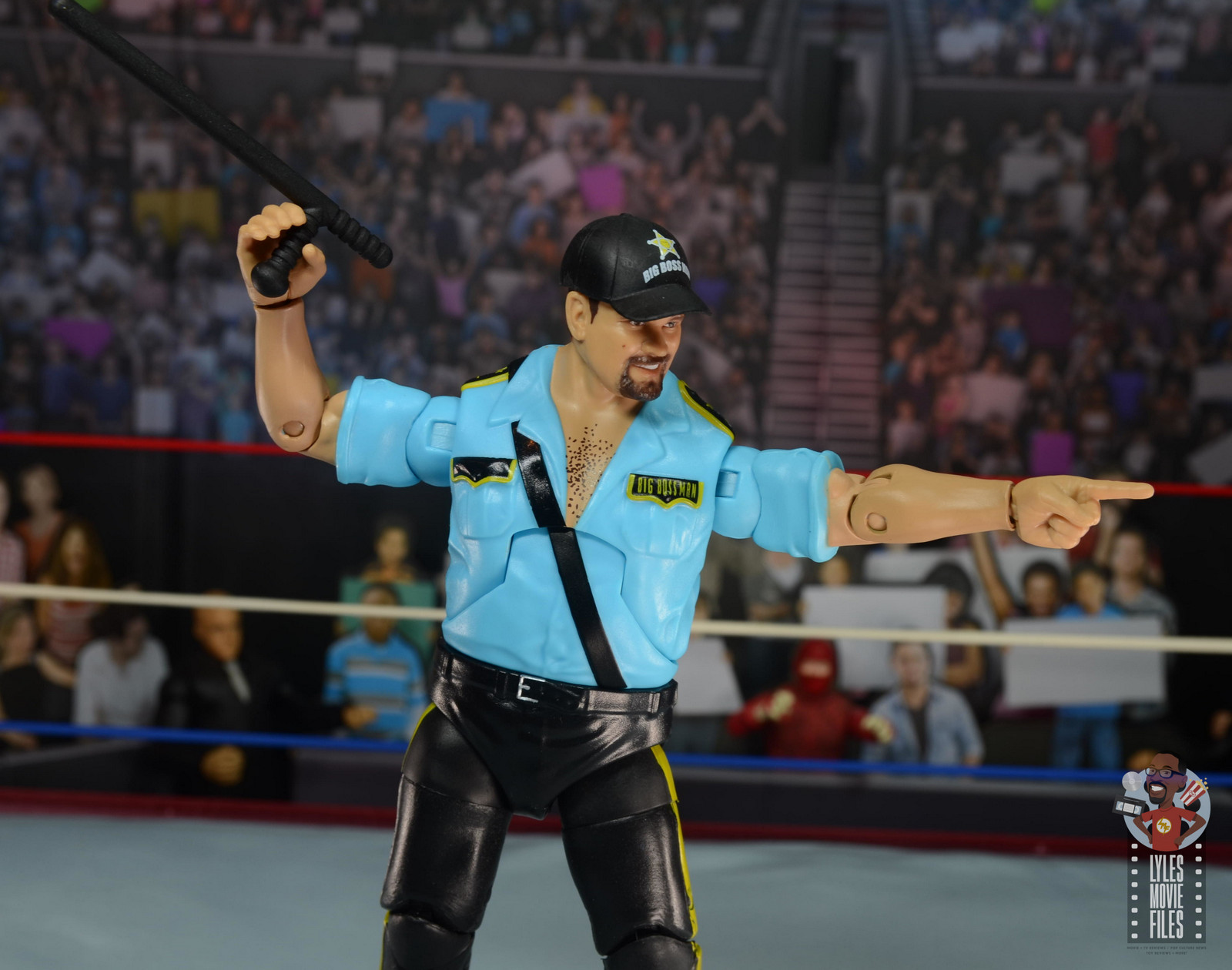 Where to get it?  Elite 89 and 90 are hitting Target in a special Wrestlemania aisle display. I went to three Targets over the weekend and just saw it at one so keep an eye out for it.  I’ve also seen Elite 90 at Wal-Mart so they’re hitting retail.

Or you can avoid the running around with has prices and just order from Amazon or Entertainment Earth.

As an Amazon associate and Entertainment Earth affiliate, I earn from qualifying purchases.