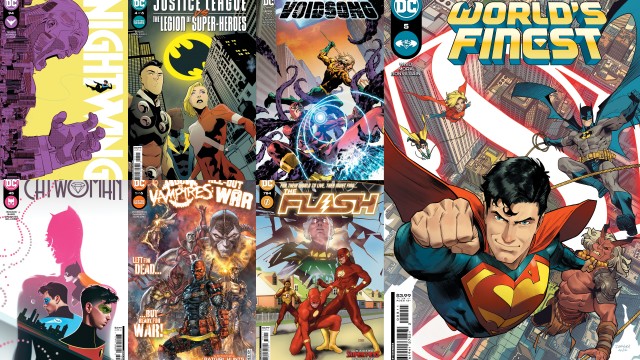 Justice League vs. Legion of Super-Heroes #4 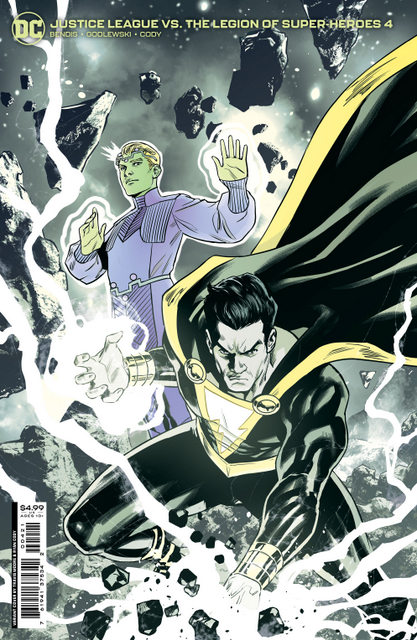 It’s fascinating how Brian Michael Bendis can have enough knowledge of DC Comics to throw in Alan Scott Green Lantern and Kamandi cameos in their respective time periods yet have no idea how any DC character should sound or act. It’s almost a gift.

Various members of the team are lost in the time stream with little direction on how to return home.

The biggest offense this issue is Bendis’ writing of Brainiac 5, who much like Batman, sounds completely out of character using manners instead of dismissively blowing off his teammates. Still, it’s highly impressive that Bendis fails to even get Batman’s voice right opting instead to make him sound like every other character in the Bendis DC Universe sitcom.

“All at the same time! Hi! Black Canary. Justice League 21st Century. I shouldn’t be anywhere near here.” What’s so frustrating about this book of two of DC’s biggest teams — besides the fact that Bendis squandered runs on both — is his continued insistence in using hokey dialogue that sounds so inorganic.

Bendis also gets to focus on two pet characters with Naomi and Rose Thorne, the Legion’s liaison simply because there weren’t enough characters for Bendis between the Legion and the League already.

It also feels like a horrible lack of editorial oversight to have Bendis even mention The Great Darkness lest this story be confused with some Dark Crisis tie-in.

Bendis can’t be bothered to stay current with events in other titles let alone the major DC event currently playing out.
Scott Godlewski’s art is solid. Bendis throws a lot of characters with little action for Godlewski, who has to settle for making conversations intense and heated. That’s mostly due to Bendis’ apparent lack of interest in writing action sequences, which is a problem considering the title.

The League isn’t fighting the Legion or anyone besides bad scripting and bafflingly characterizations. This isn’t a title I’d recommend just to see how the story pays off. Given Bendis’ DC track record, it’ll be a slammed together conclusion with dim witted dialogue that makes spectacles of all the players.