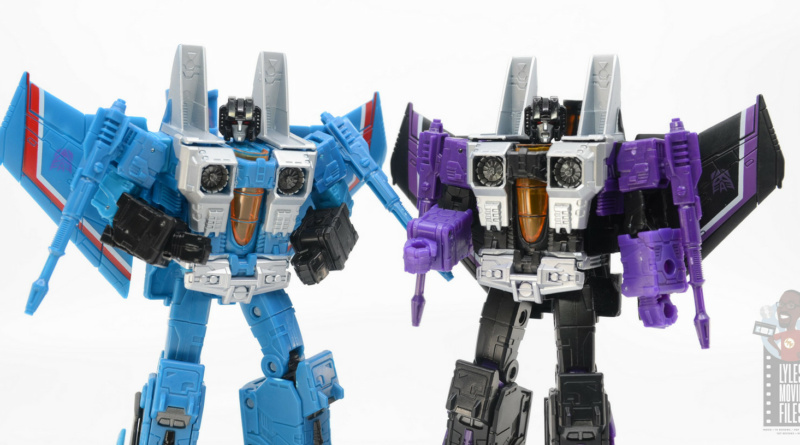 Thundercracker and Skywarp knew their place in the Decepticon hierarchy. They weren’t constantly scheming to challenge Megatron’s leadership like Starscream and were perfectly content going after the Autobots.

Like most of the original series, my take on the characters was largely steered by the G1 bios. Unlike their GI Joe counterparts, the Transformers cartoon largely kept the tech spec info intact. Neither was the savviest Decepticon, but extremely formidable in battle. That’s important considering the Autobots’ numerical advantage.

In slowly building my Earthrise/Kingdom/Studio Series collection, it’s been frustrating missing so many key original Decepticons. Thankfully, I was able to get the Earthrise two-pack featuring two of Megatron’s most loyal troops. Let’s see if I’ll be the one screaming after I open them up.

Packaging: As part of the Earthrise branding, the duo get a turquoise and black color scheme. There’s just one portrait with them in their jet modes. The other side features a collage of the main Autobots and Decepticons from War for Cybertron Earthrise.

On the back, we get a picture of Skywarp and Thundercracker in both robot and alt mode with a special designation that they’re part of the Seekers Elite team.

The packaging also makes it clear of their affiliation with a Cybertronian Villains tag.

Likeness:  The seekers are had a great design with their heads engulfed by the base section of the cockpit. It’s a bit more pronounced with these figures than normal, but not too obnoxious. 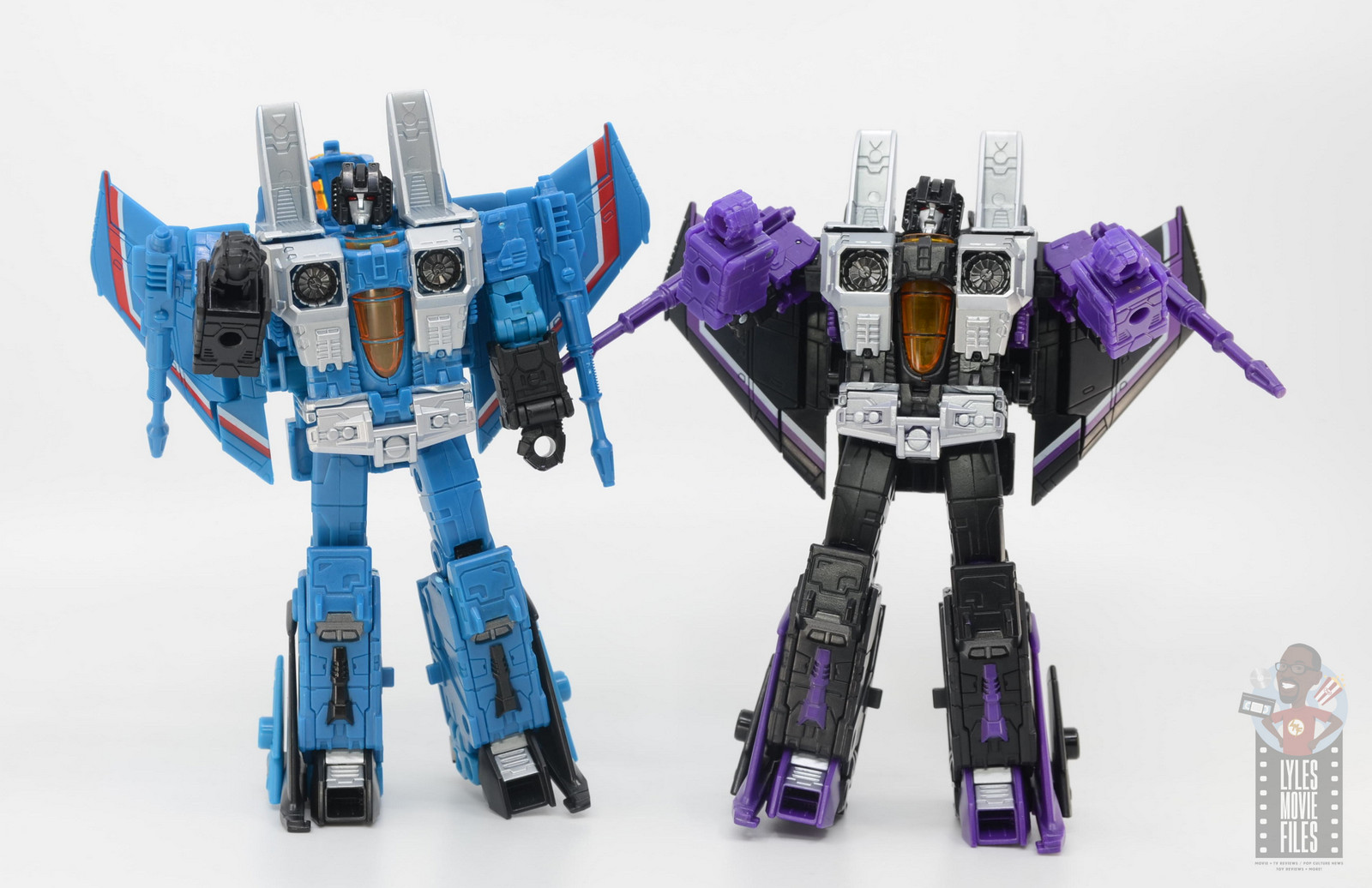 Overall, the seeker design is nicely executed. These figures have more detail than the cartoon-skewing Masterpiece figures, which almost seems backwards given the pricing.

While the design is more complex, Hasbro didn’t Michael Bay them with unnecessary paneling and detailing. The paneling, vents and lining makes sense without appearing too segmented.

The wings have a good wingspan, so they won’t be shelf hogs, which is helpful. Their null ray blasters are just the right length extending just a little past the fists. 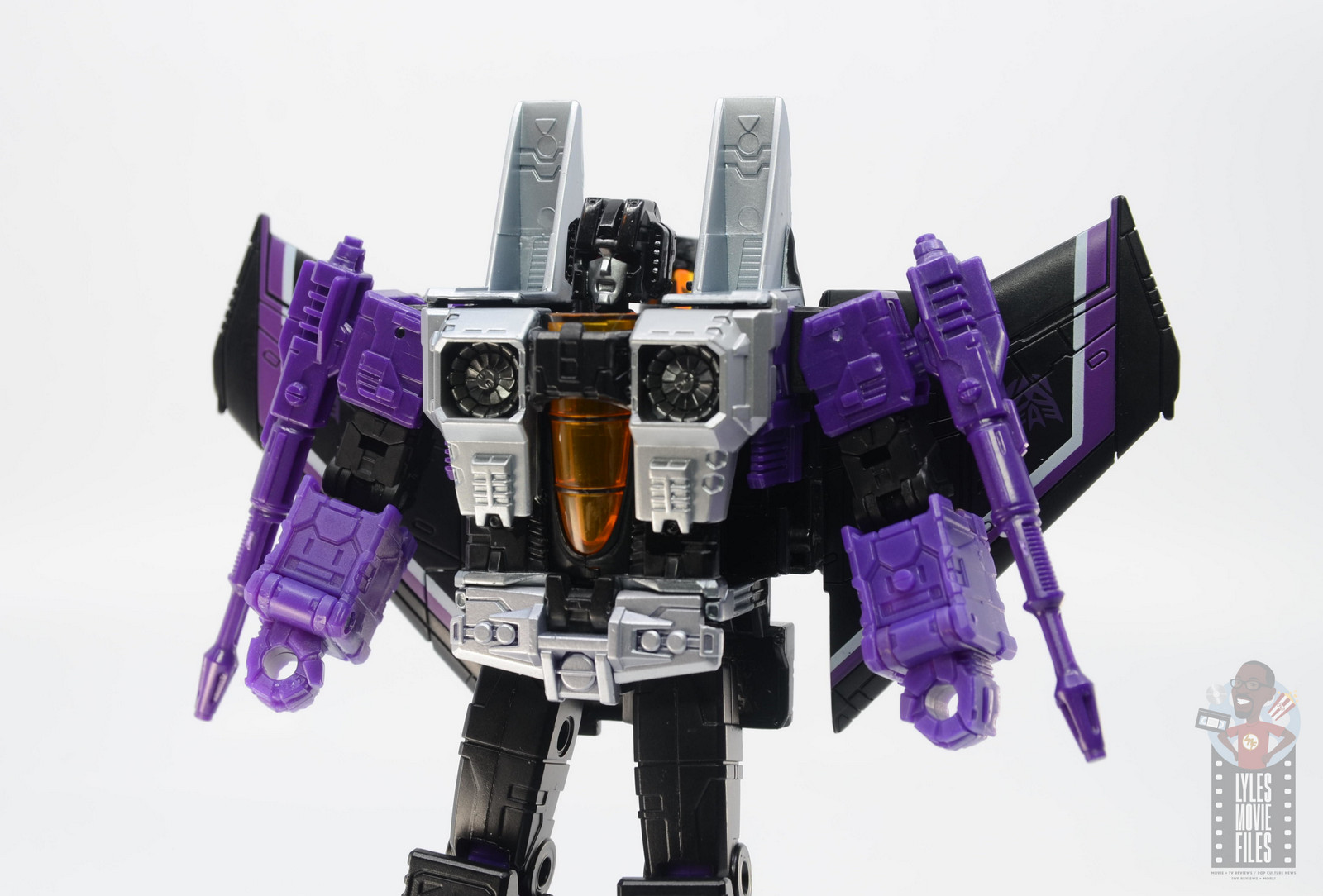 There’s not much difference between the two figures save the head sculpts. Skywarp has a yelling expression while Thundercracker has more of a neutral one. I appreciate Hasbro breaking that up just a little although alternate portraits for both would have been even better. 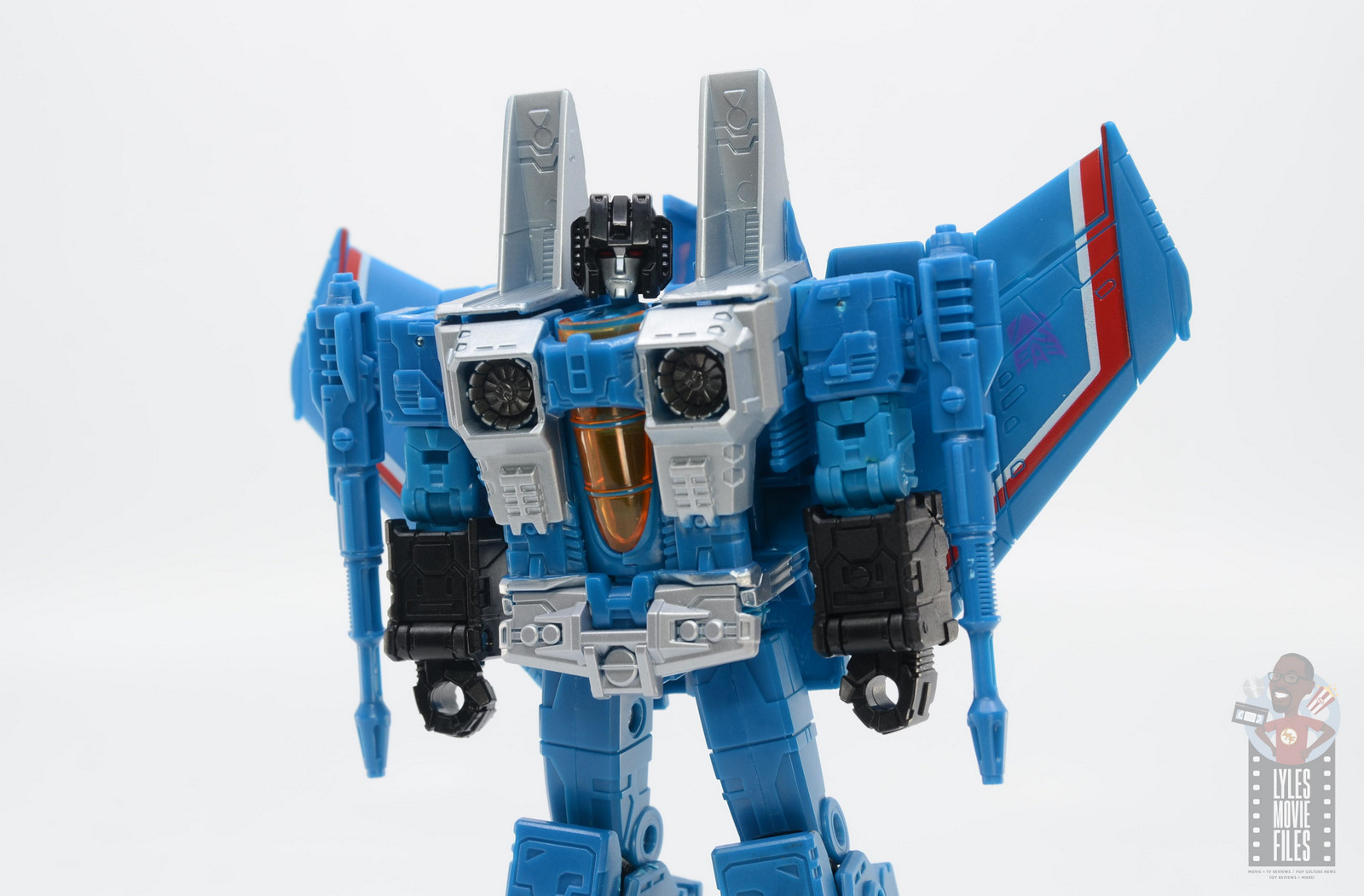 A smirking and angry options would fit their personalities.

Alt Mode: The Seekers turn into F-15 jets. That was awesome back in the 80s and remains the case in the 20s. 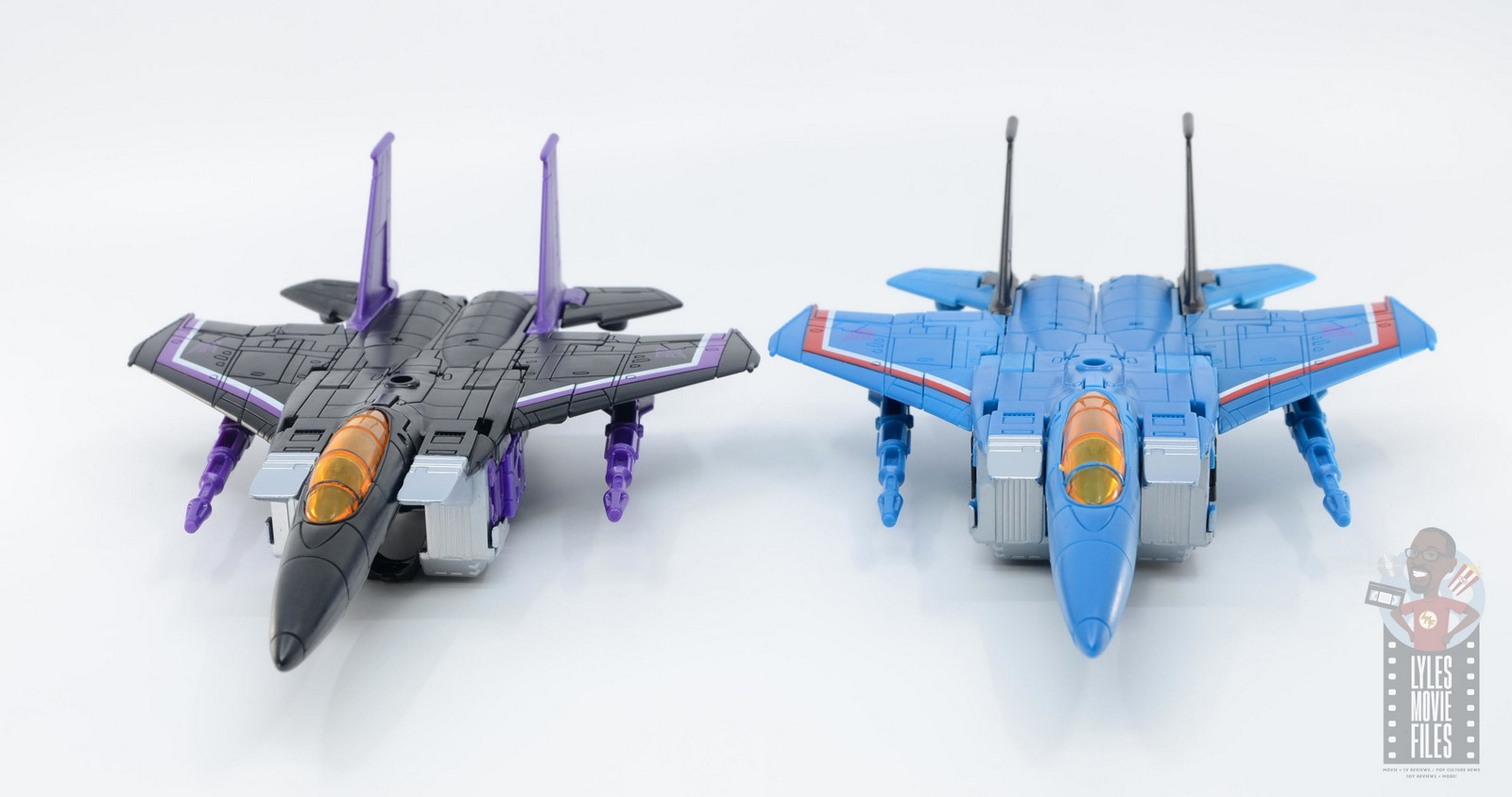 This is one of my favorite designs because it mixes something frequently seen in 80s action movies into the world of Transformers.

Transformation: The Seekers’ transformation takes 30 steps. It really wasn’t too hard to get them transformed. The biggest challenge was getting the panels and seams to lay flush in the proper placement. 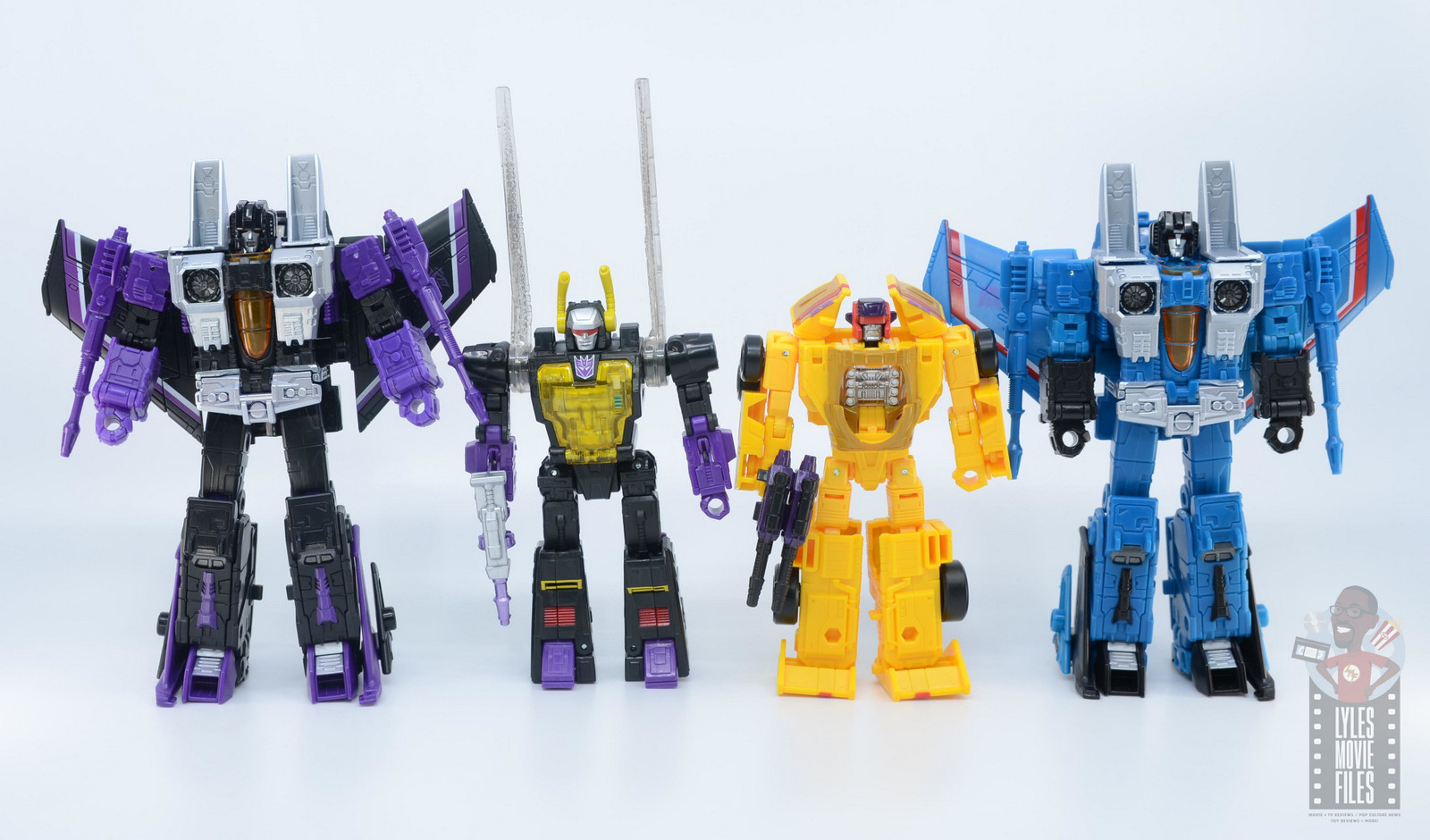 Scale:  Now that I’ve got the Seekers, it’s time to bust out my Megatron figure for proper scale comparison. They’re taller than most of the Autobots and standard size Decepticons as they should be. 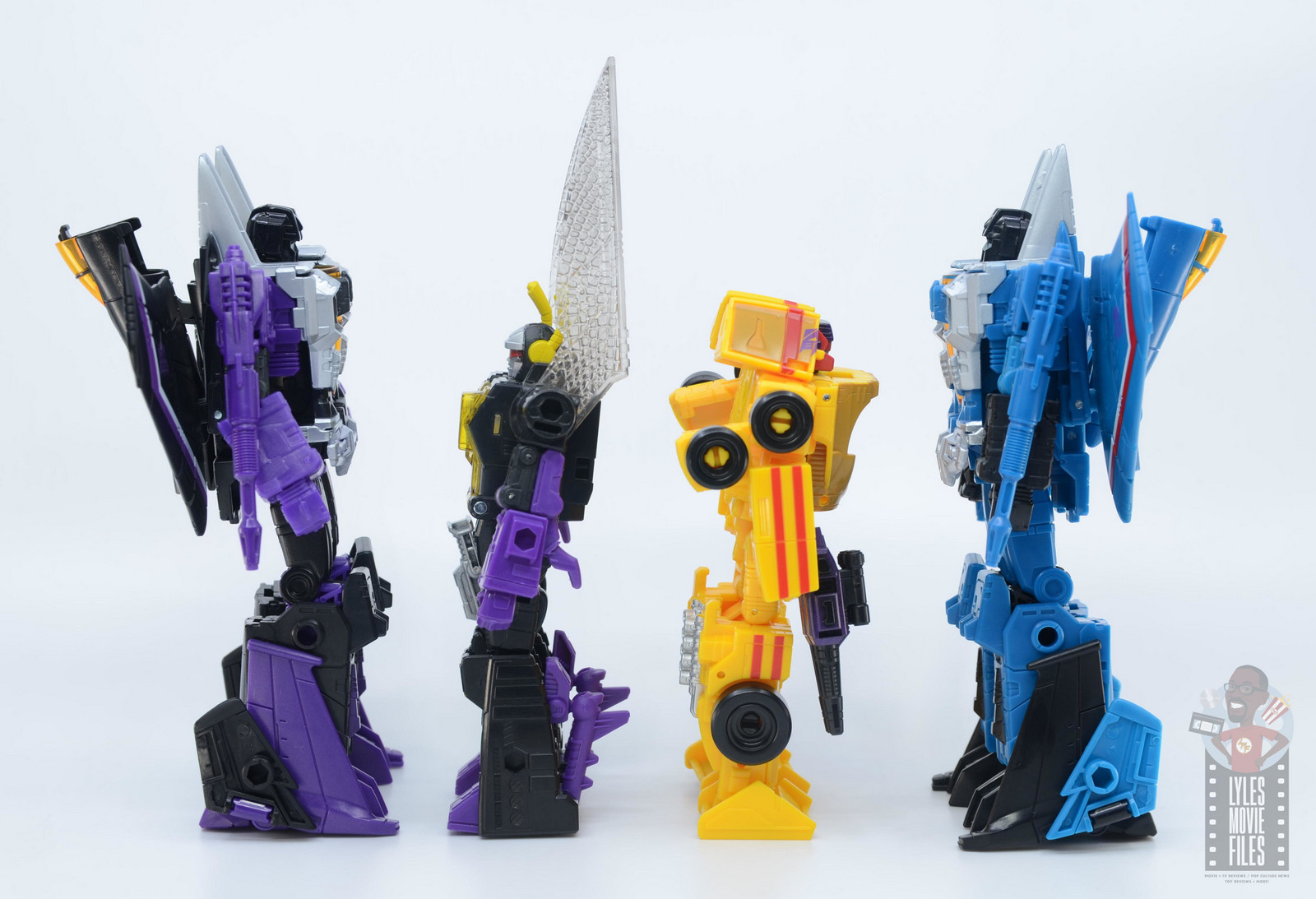 Paint: Skywarp’s paintjob is 99.1% clean. I’ve always liked his black and purple as it fits a Decepticon perfectly. Skywarp is painted like his cartoon counterpart for the most part. His purple is darker instead of the lighter shade shown on the cartoon.

The Masterpiece version has that correct shade. Given the open mouth sculpt, it would have been nice to get a darker silver or grey for the mouth section. His expression kinda gets lost with the one color.

Thundercracker’s color is somewhat off. He’s more of a periwinkle while this figure is more of a turquoise? It’s an odd shade of blue for him.

I don’t hate it but think Hasbro could have matched the color better. Again, the Masterpiece Thundercracker is correct with the colors. I suppose this is why you pay an extra $125? He’s got some tiny overspray of the blue onto his waist piece.

Both Seekers had a spot on the right wing where some of the accent color creeps onto the white stripe. It’s certainly not obvious unless you’re looking for a problem like me.

Articulation: Thundercracker and Skywarp move very well. They were surprisingly fun to pose in both robot and jet mode. 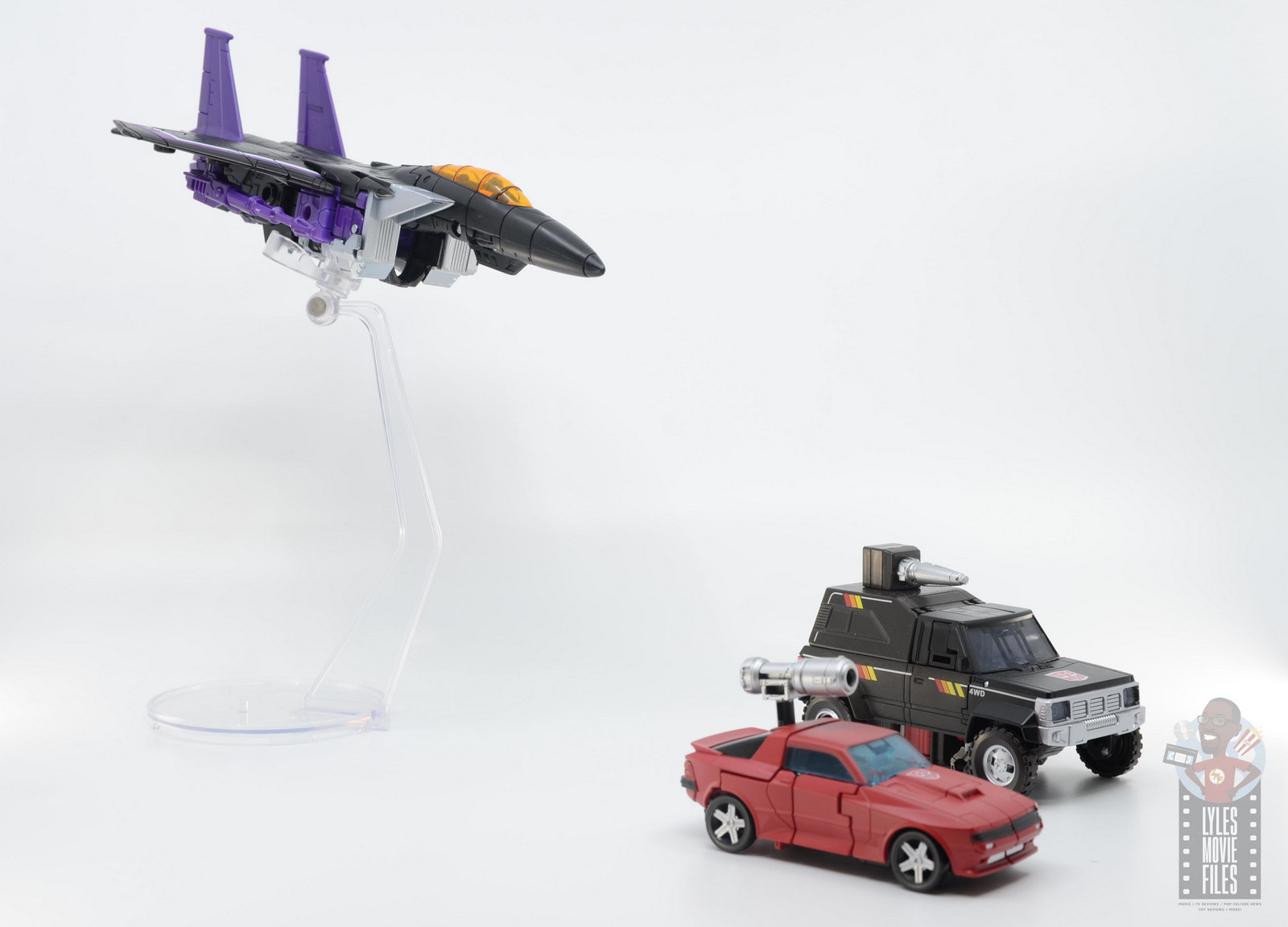 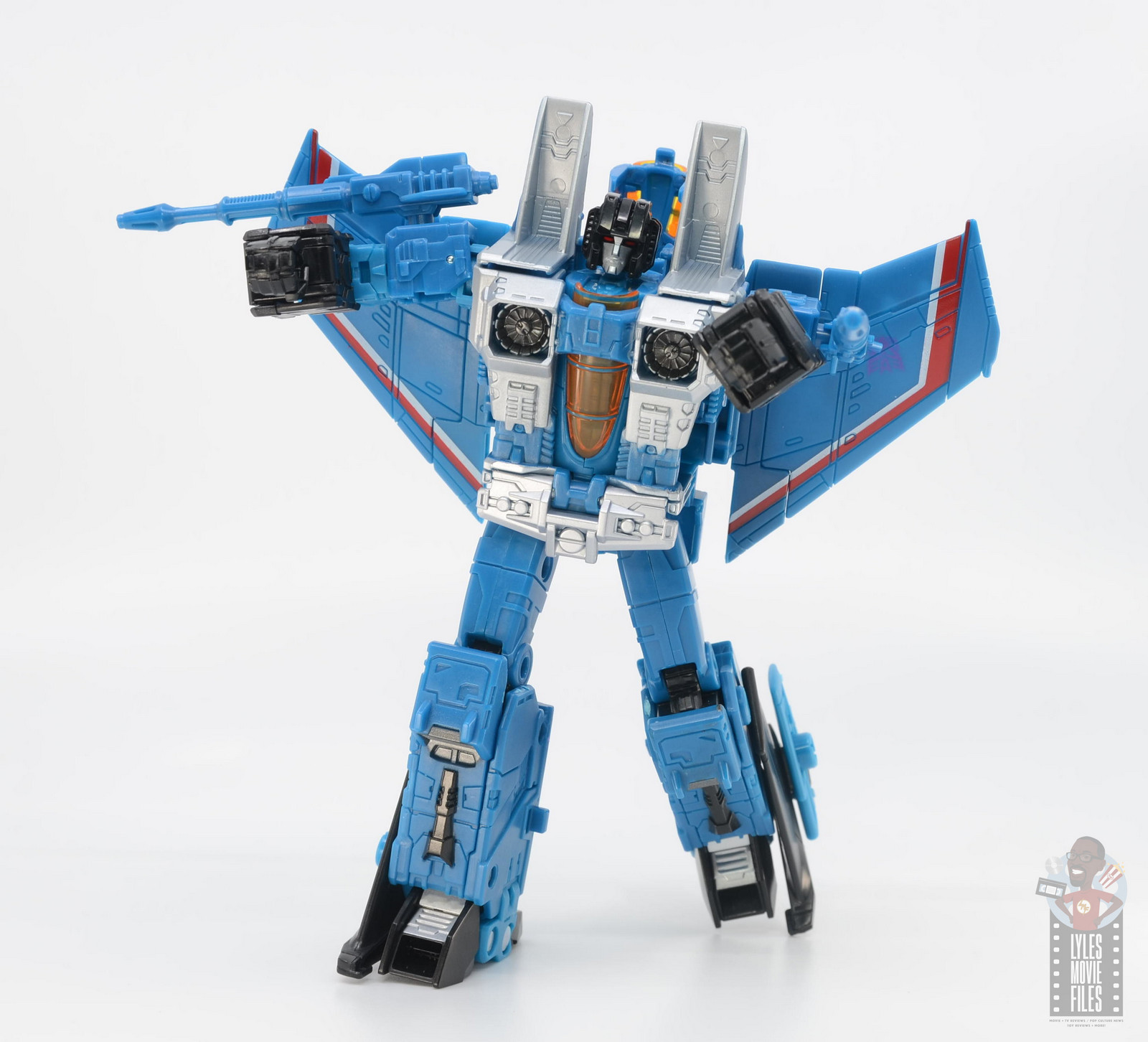 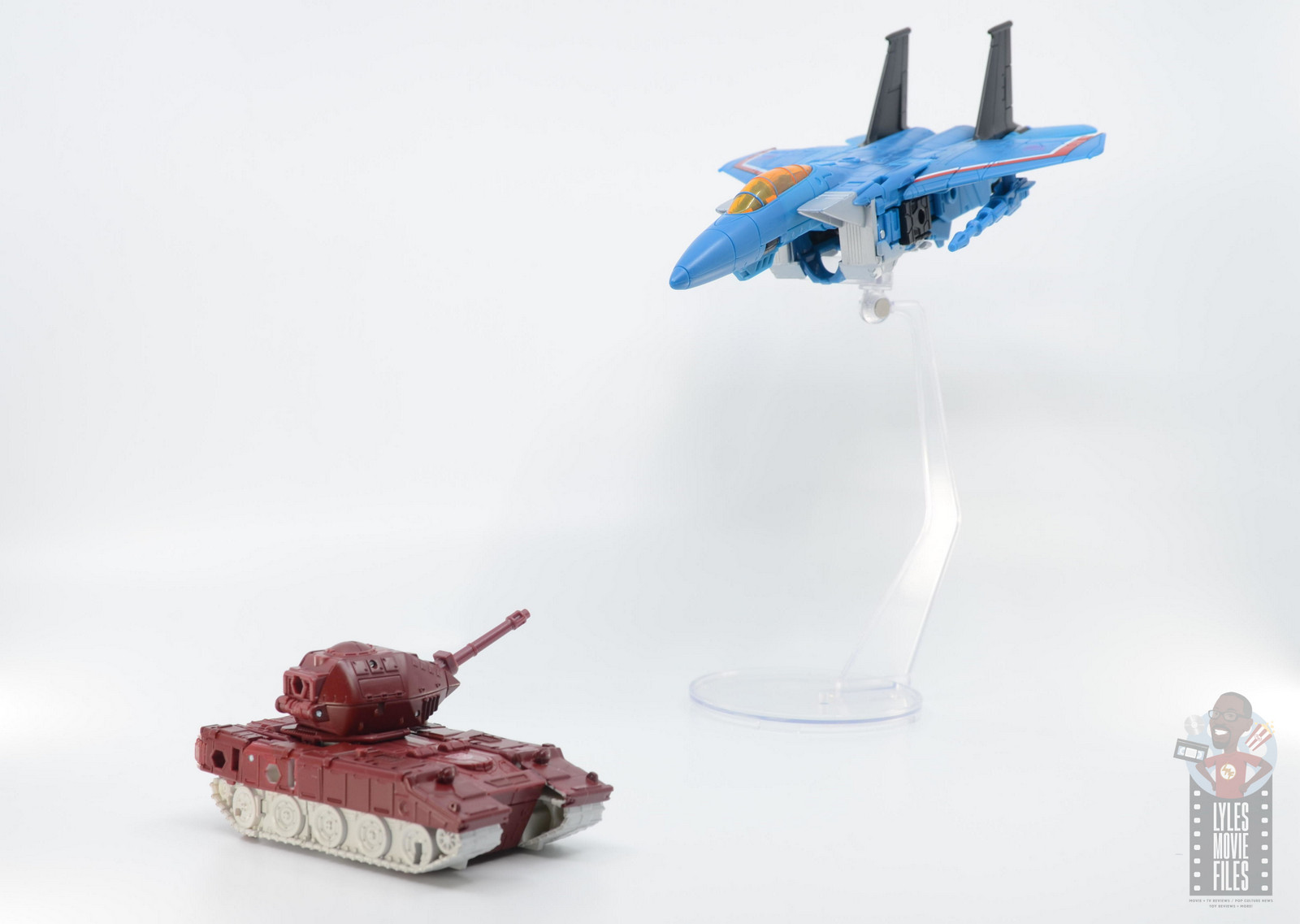 Accessories:  Neither Seeker has any extras. The null ray blasters are part of their design so they don’t get the benefit of a blaster accessory. A few Energon cubes would have been nice just to add a little something. 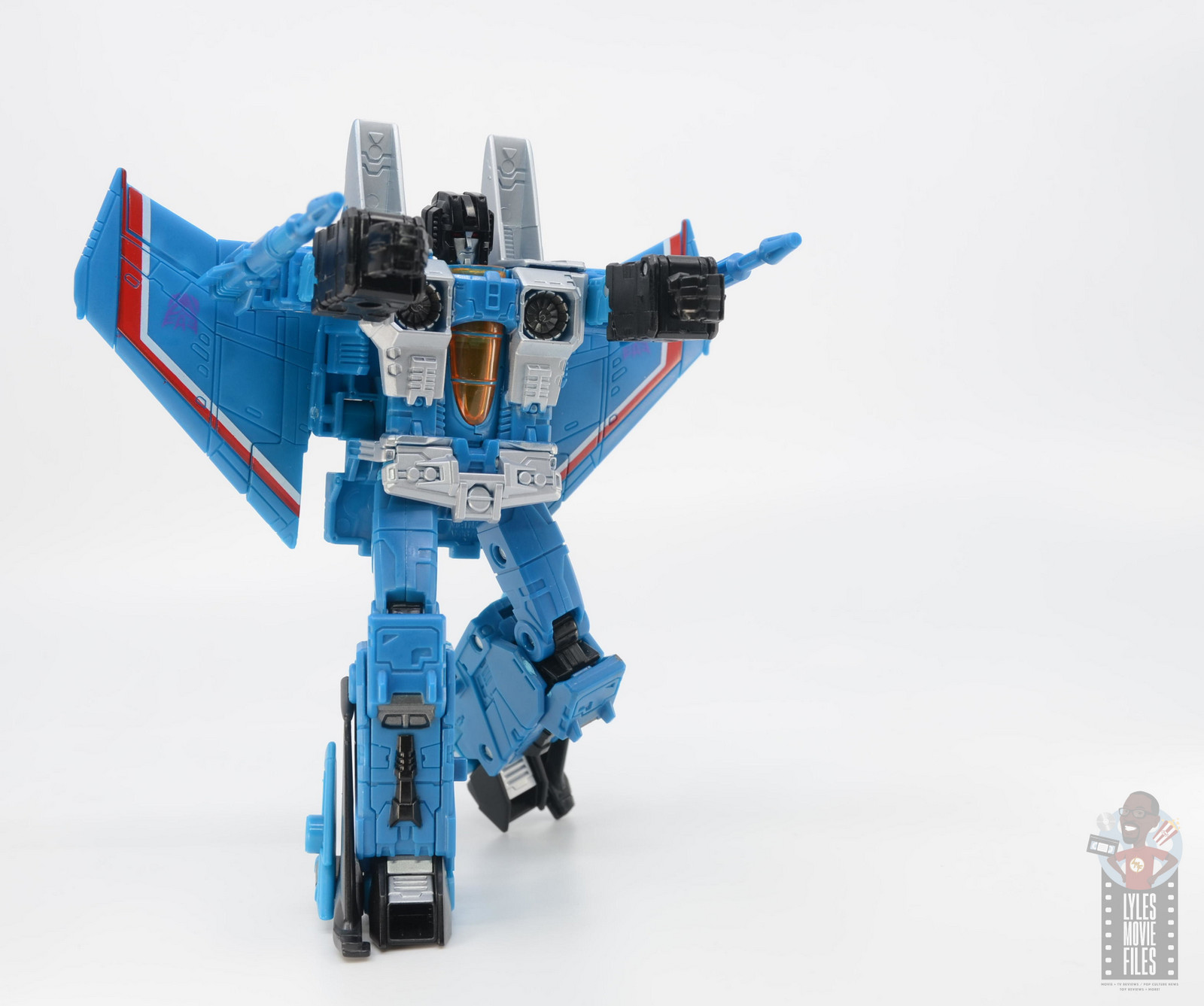 Worth it?  I got the Seekers for $65 so I essentially paid the current $32 price point for these guys. That would be better with some accessories and less issues with the wings.

I would have loved to see alternate face plates and more cartoon accurate colors. Otherwise, these are two essential figures for any classic Decepticon display. 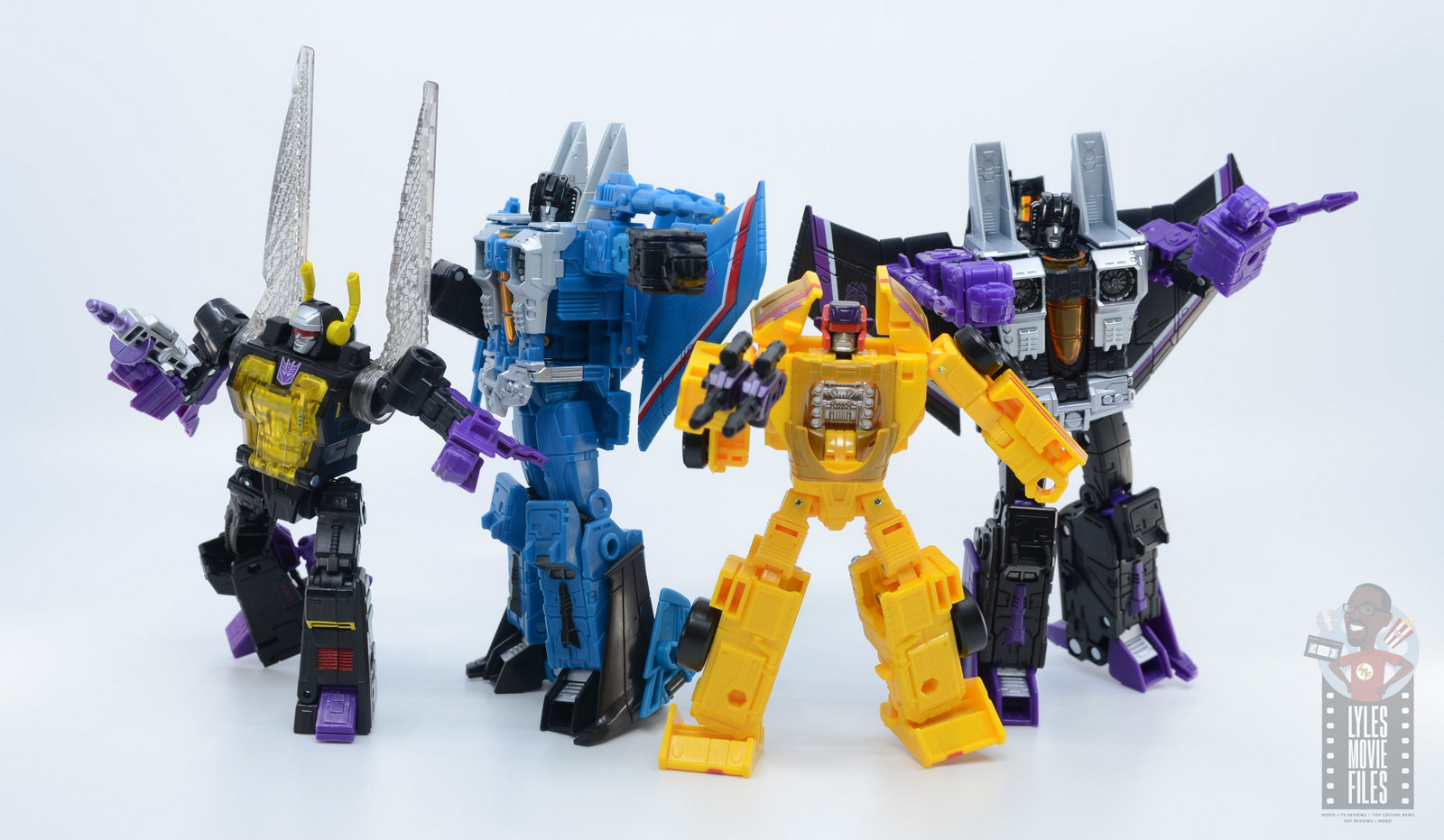 Where to get it?  While they were a huge pain to get earlier, you can actually still get the Seekers from Amazon. I’d recommend jumping on them quick since they’re already sold out at Big Bad Toy Store. Entertainment Earth has them coming in August for $65.