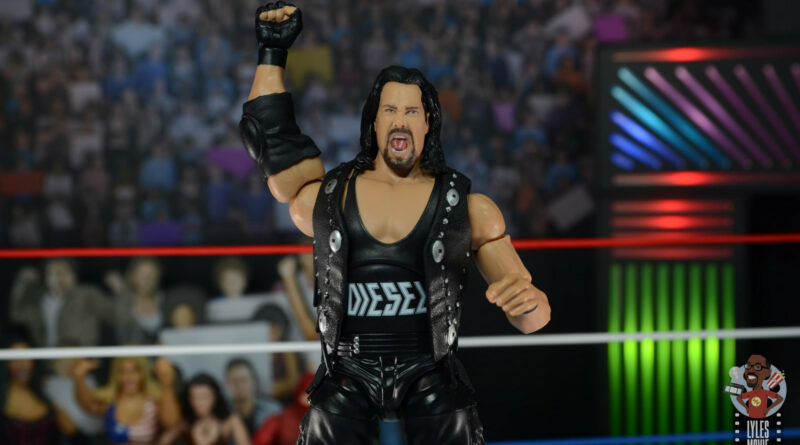 After the swing and a miss with Lex Luger, Diesel was Vince McMahon’s next would-be Hulk Hogan successor. Positioned as the leader of the New Generation, Diesel enjoyed a solid year as a top tier fan favorite though it was clear Bret Hart and Shawn Michaels would not be denied.

For the WWE Ultimate Edition New Generation Arena, it only made sense for Mattel to include Big Daddy Cool as one of the bonus tier offerings. This was a savvy inclusion in the crowdfund effort since it provided one of the New Generation pillars.

Along the side, we get a classic Diesel portrait. As usual, the back features an action shot of the figure and a reference photo.

The stats are always helpful and the bio is excellent. 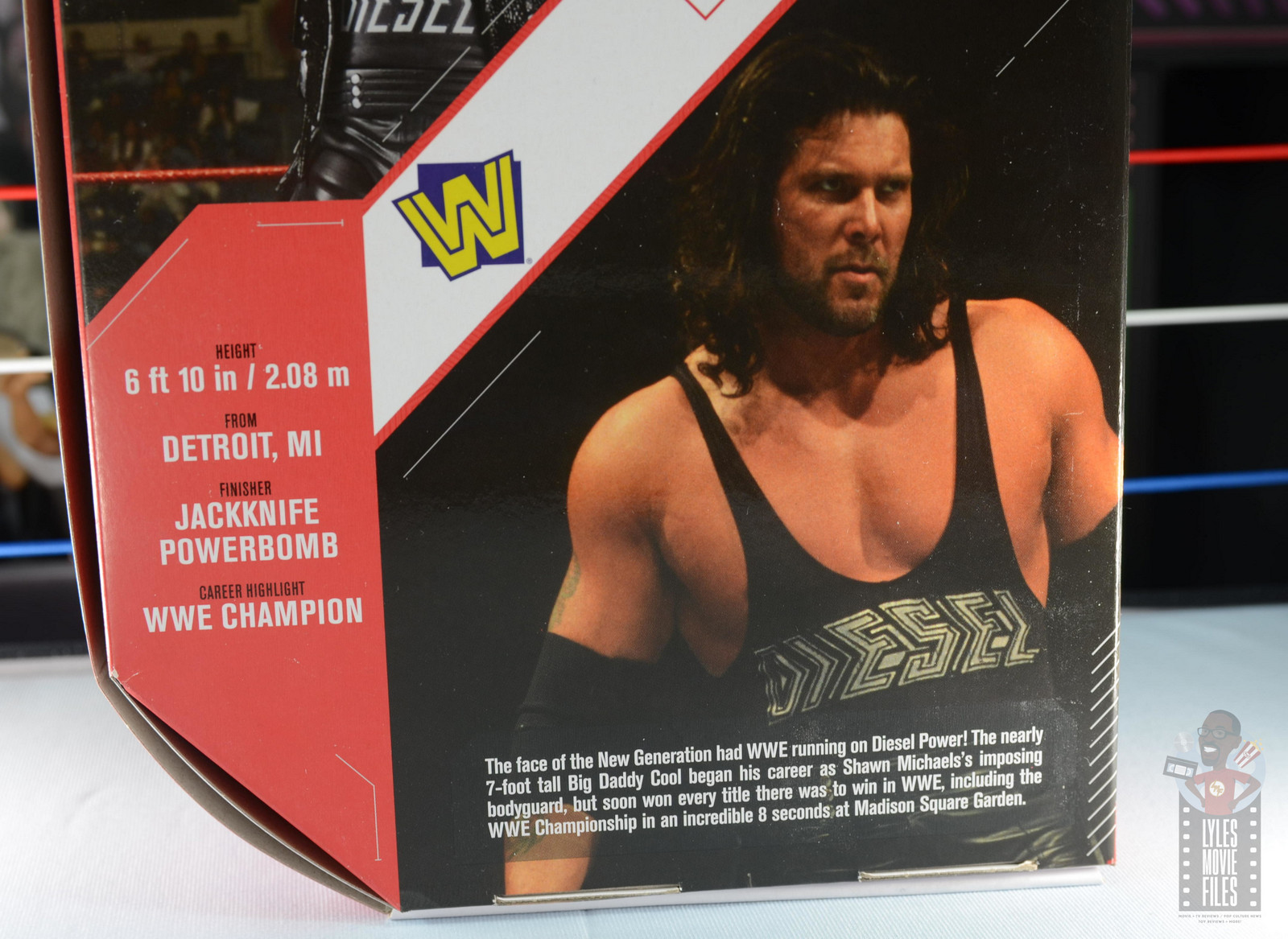 Likeness:  Diesel’s head sculpt is pretty good. I think what’s throwing it off a little is Mattel’s can’t quite get down Diesel’s hair. It’s not as voluminous as it was during his run as champion. It’s a little too close to the sides and not as high as it should be for an exact likeness. 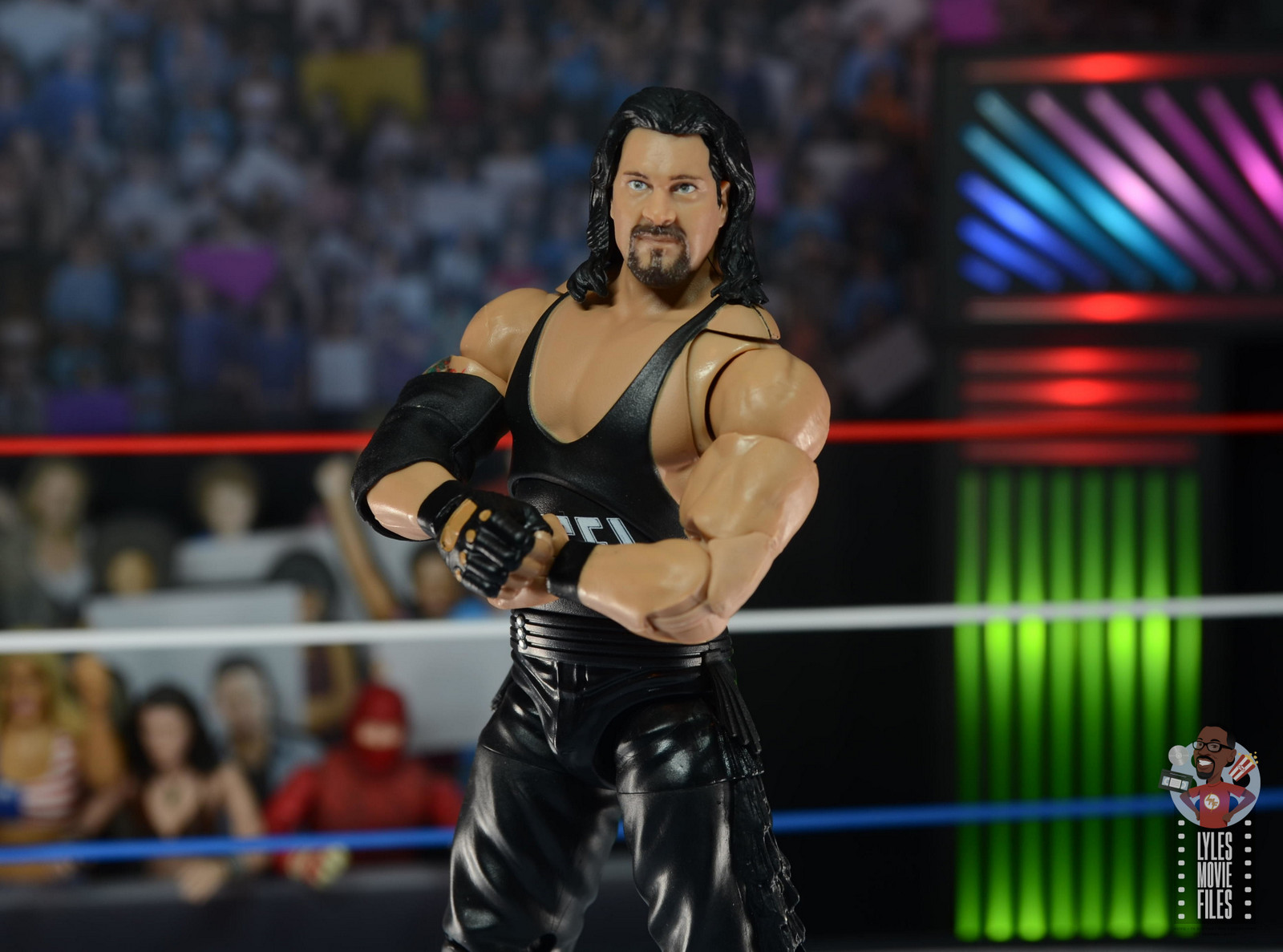 The expression could use just a bit more intensity. Looking at it up close the likeness is definitely there, but he seems a little too “cool” for Big Daddy Cool. Just a slight narrowing of the eyes would have done a lot to convey Diesel is ready for action. Or Mattel could have gone with a smirking expression, which wasn’t uncommon for Diesel during that era either. 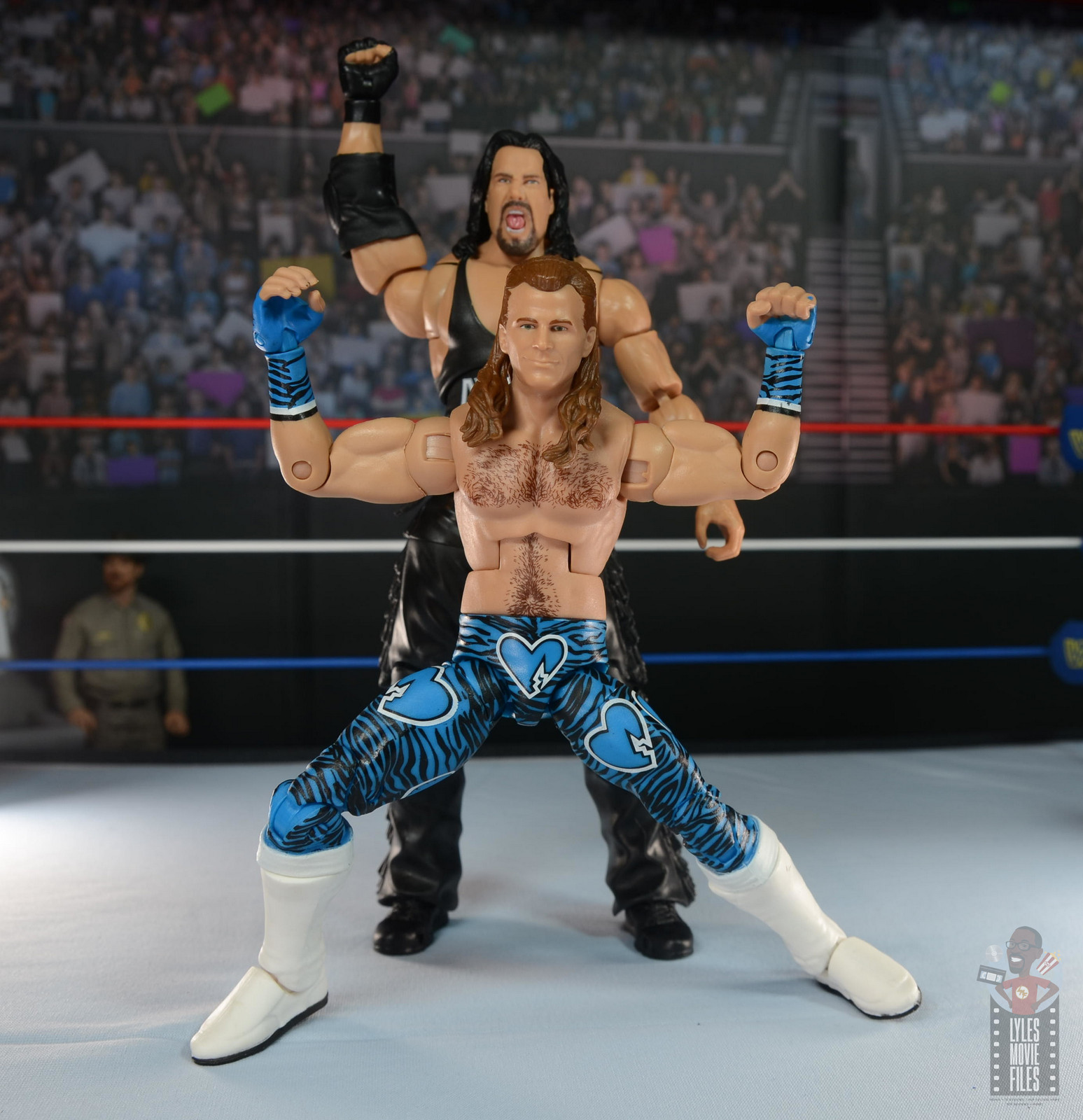 Beyond the head sculpt the figure is what you’d expect from a Diesel figure. Right elbow sleeve, molded glove right hand, pants belt and tassels along the side. Mattel cracked the code for making the pant tassels look right and it looks great. 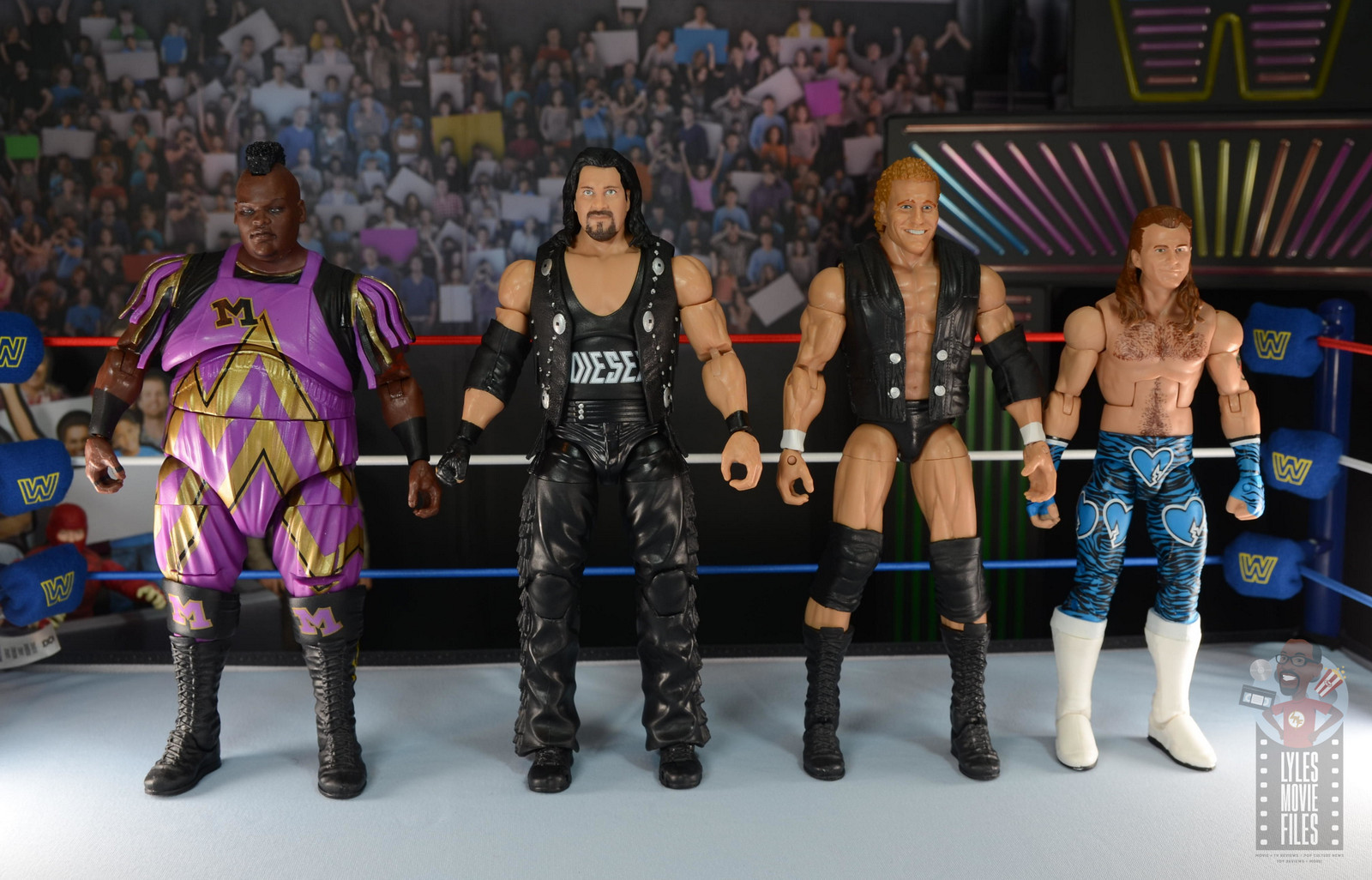 Scale:  Diesel was 6’10” so he is taller than his 6’1″ pal HBK, the 6’7″ Razor Ramon and the 6’9” Sycho Sid and Mabel. He and The Undertaker should be eye to eye. Mabel is slightly taller, but the scale checks out with the others just fine. 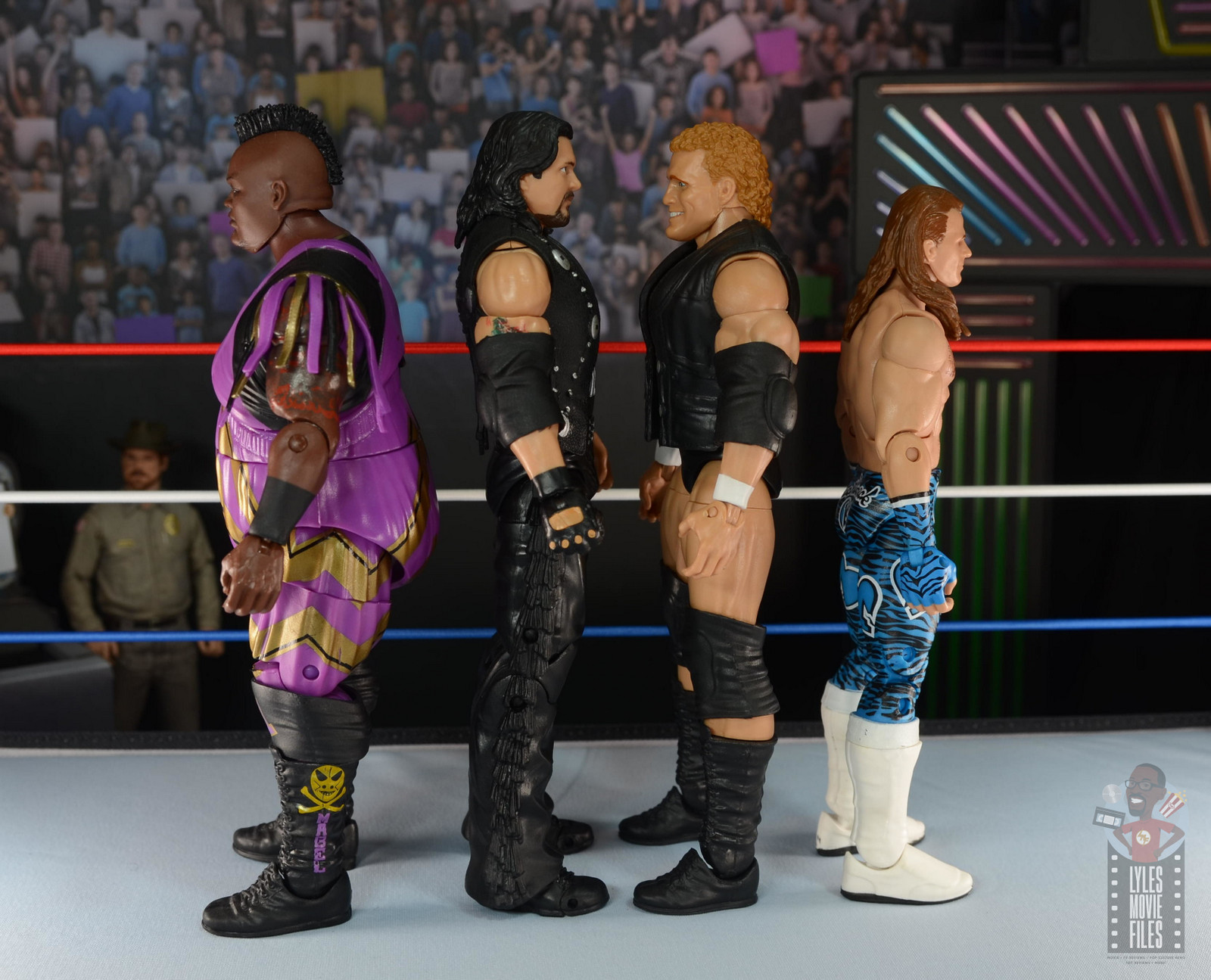 Paint:  Diesel had some surprising diversity with his attire despite the limiting color scheme.

Mattel couldn’t quite replicate the lettering of Diesel’s tank top. The grey should be thicker with far less black showing between the lettering.  What is here is OK, but doesn’t come close to matching the reference.

Interestingly, Mattel went with brown paint for Diesel’s eyebrows and goatee, which should be painted jet black like his hair. That’s an odd mistake for Mattel as they normally don’t make these kinds of paint mistakes. 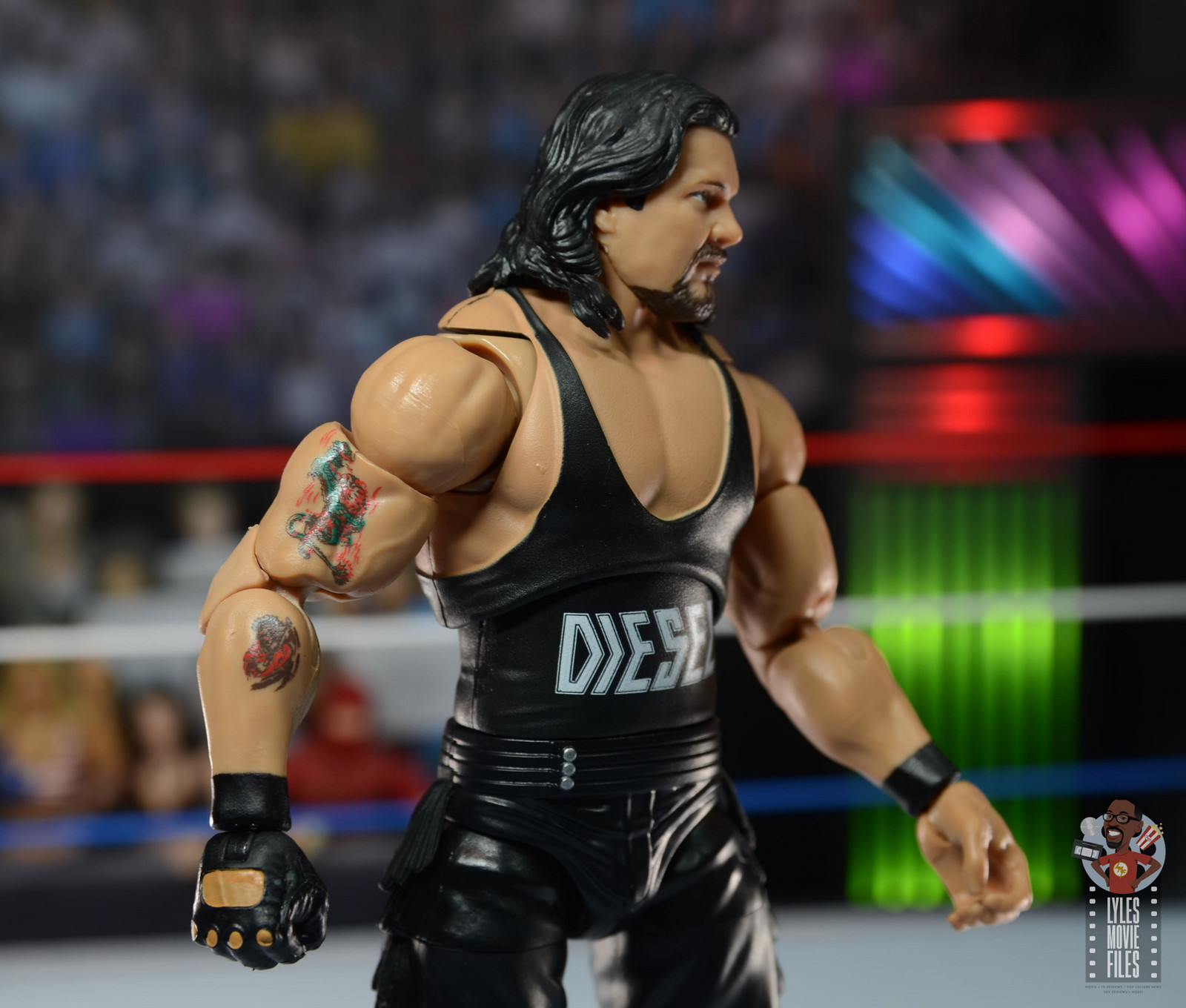 Articulation:  Diesel didn’t move around like his BFF Shawn Michaels, but he was still agile for a guy his size. 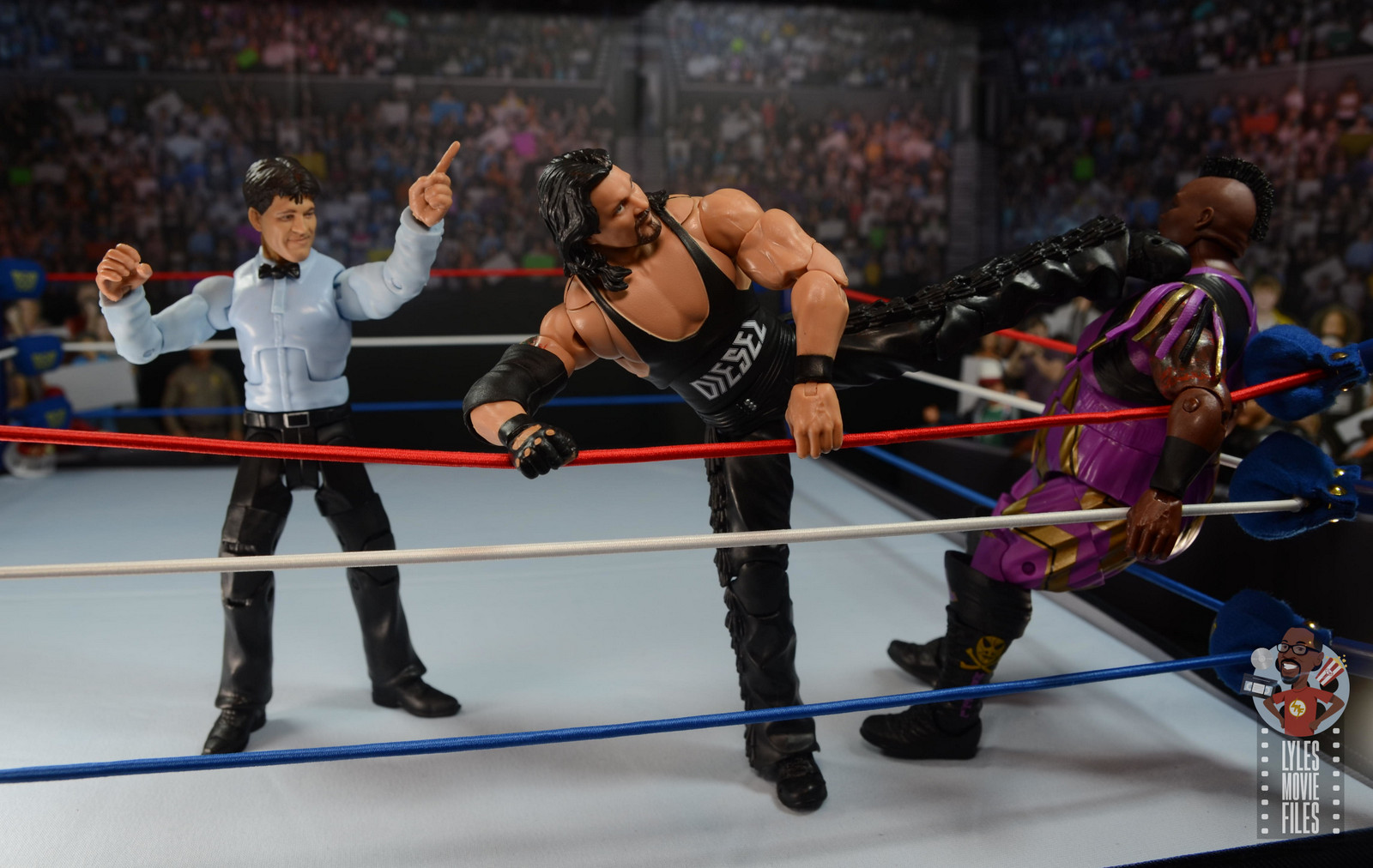 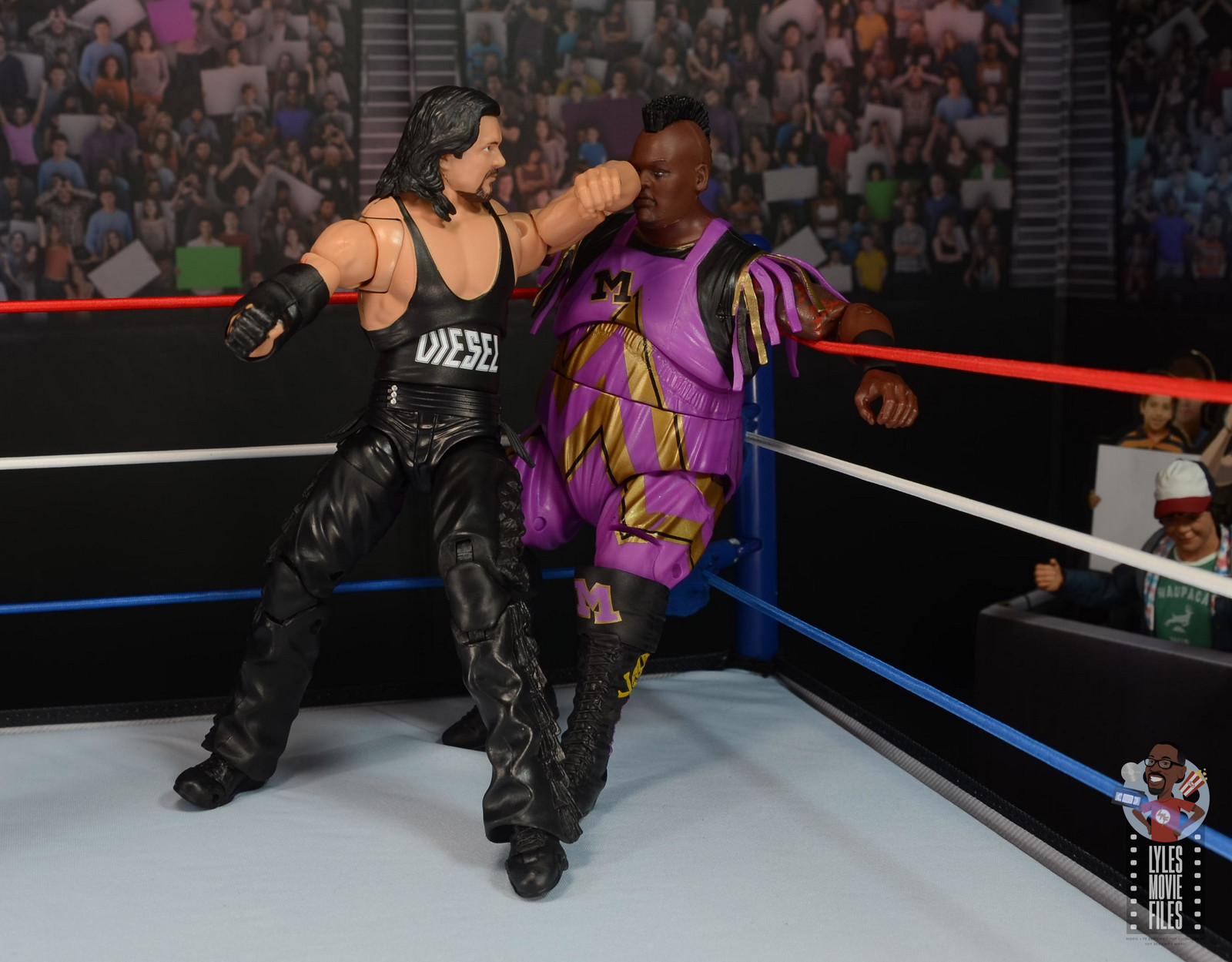 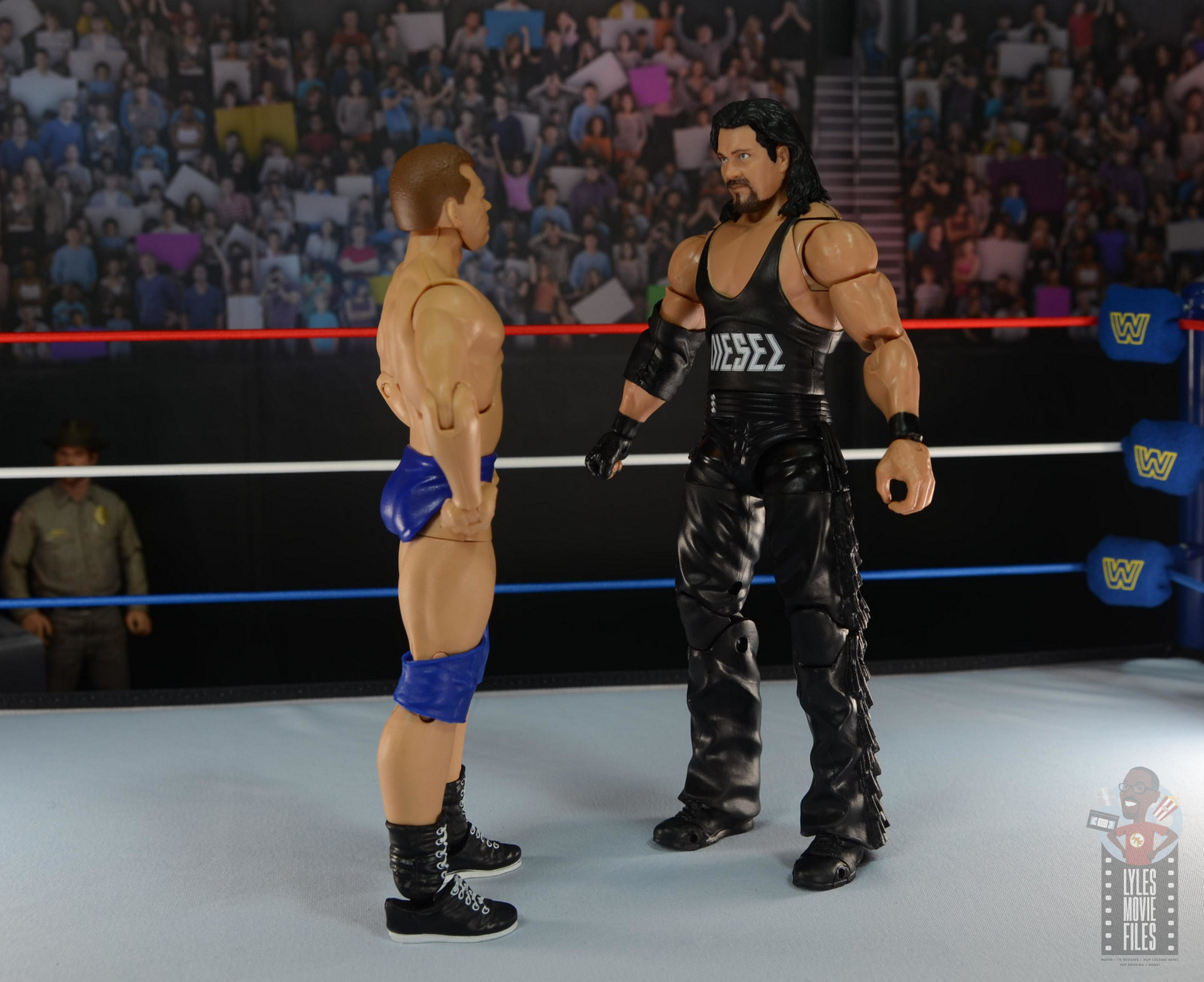 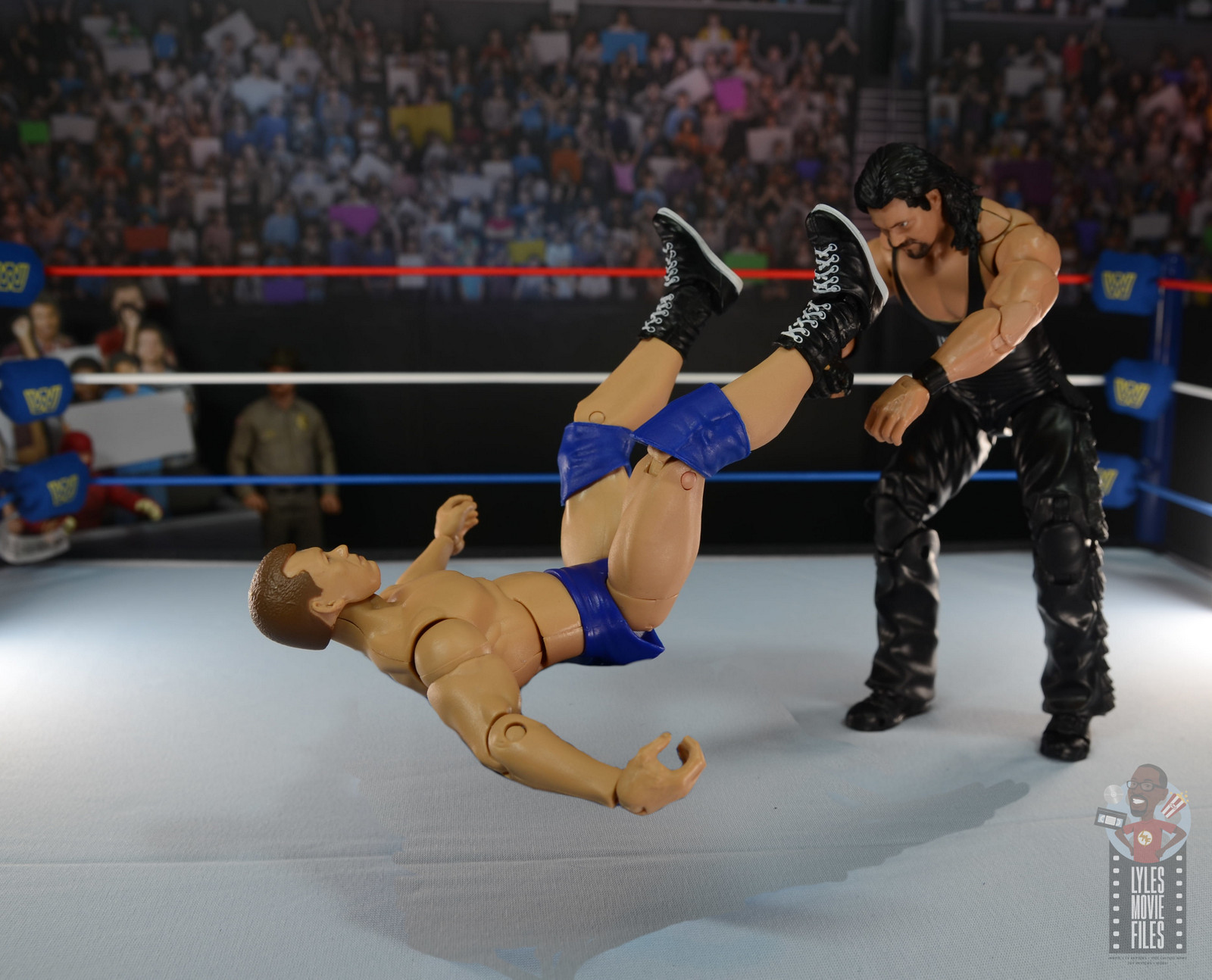 Mattel is starting to implement drop down hips to allow for more range in executing big boots. That sounds like it would have been helpful for Diesel here although I didn’t have any problem getting a solid looking big boot. 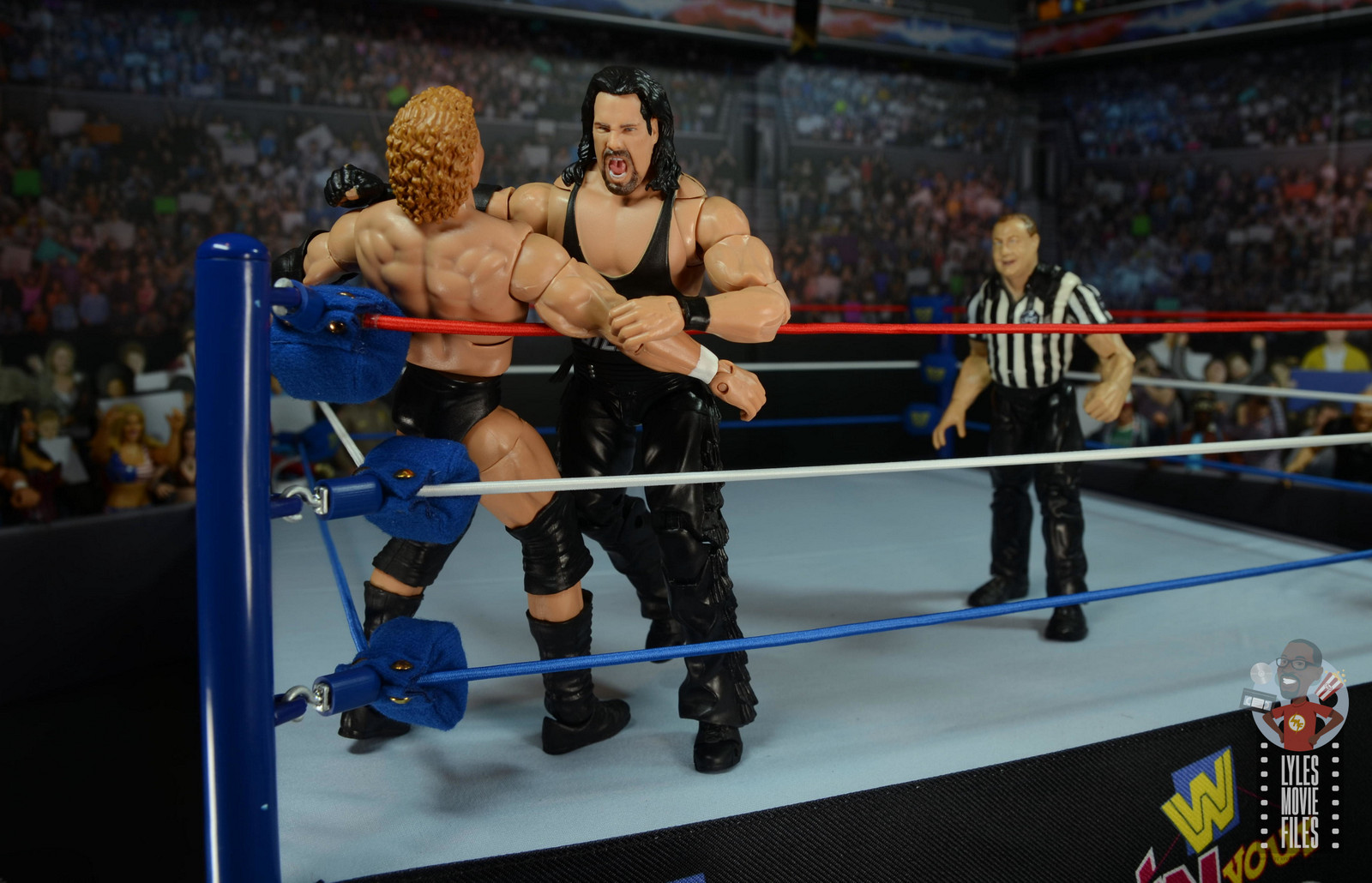 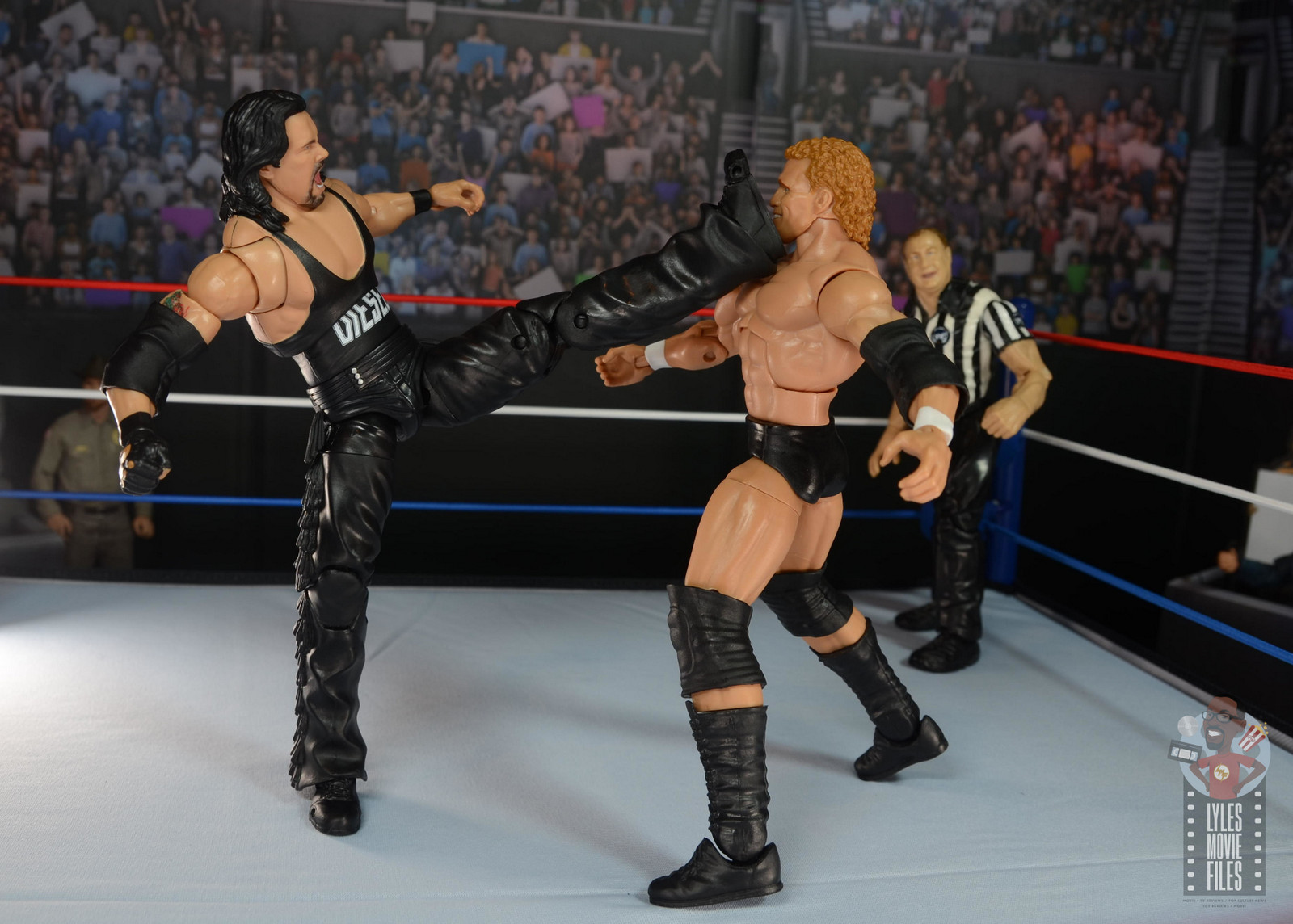 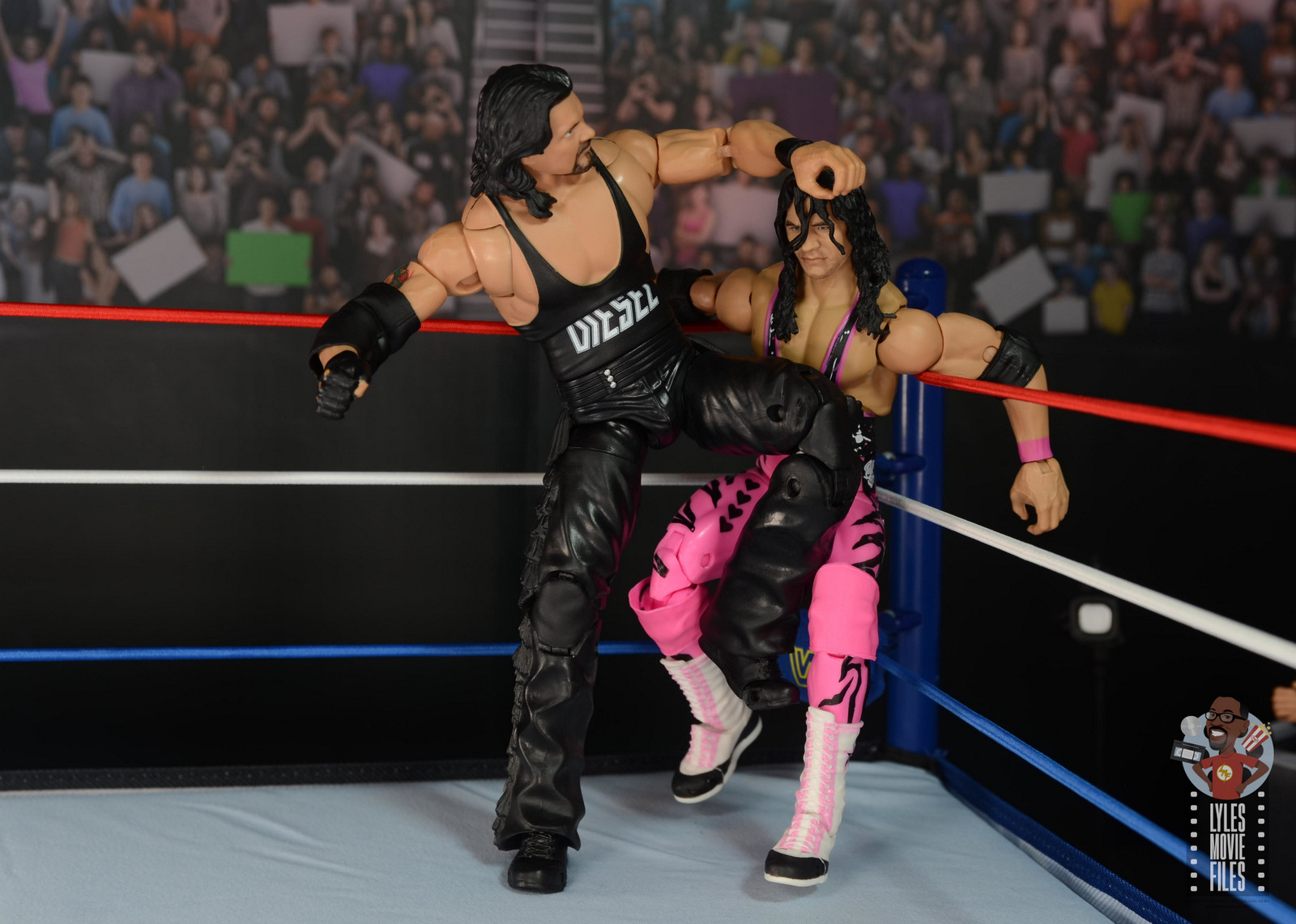 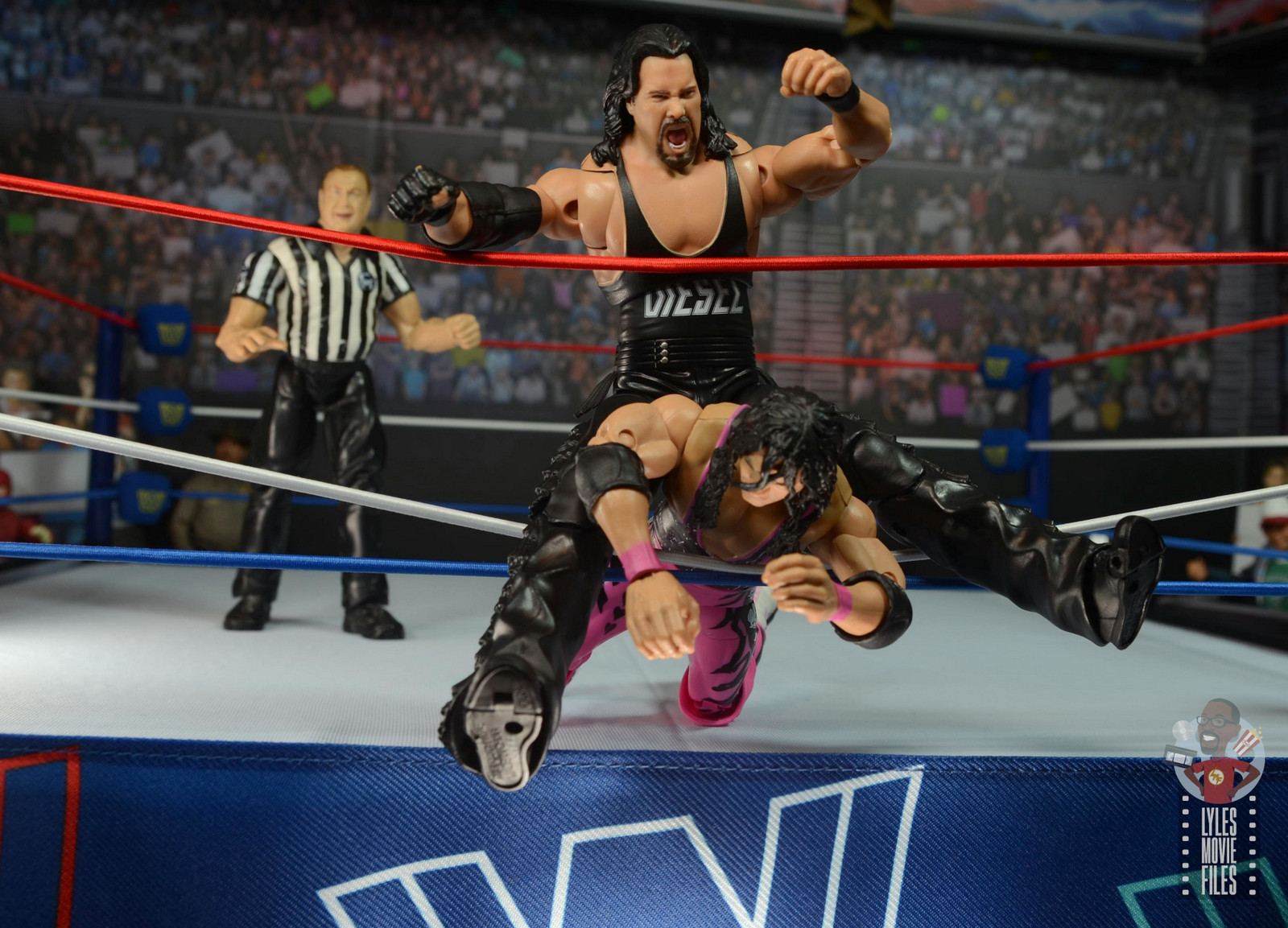 I had a lot of fun pitting Diesel against my existing New Generation crew. 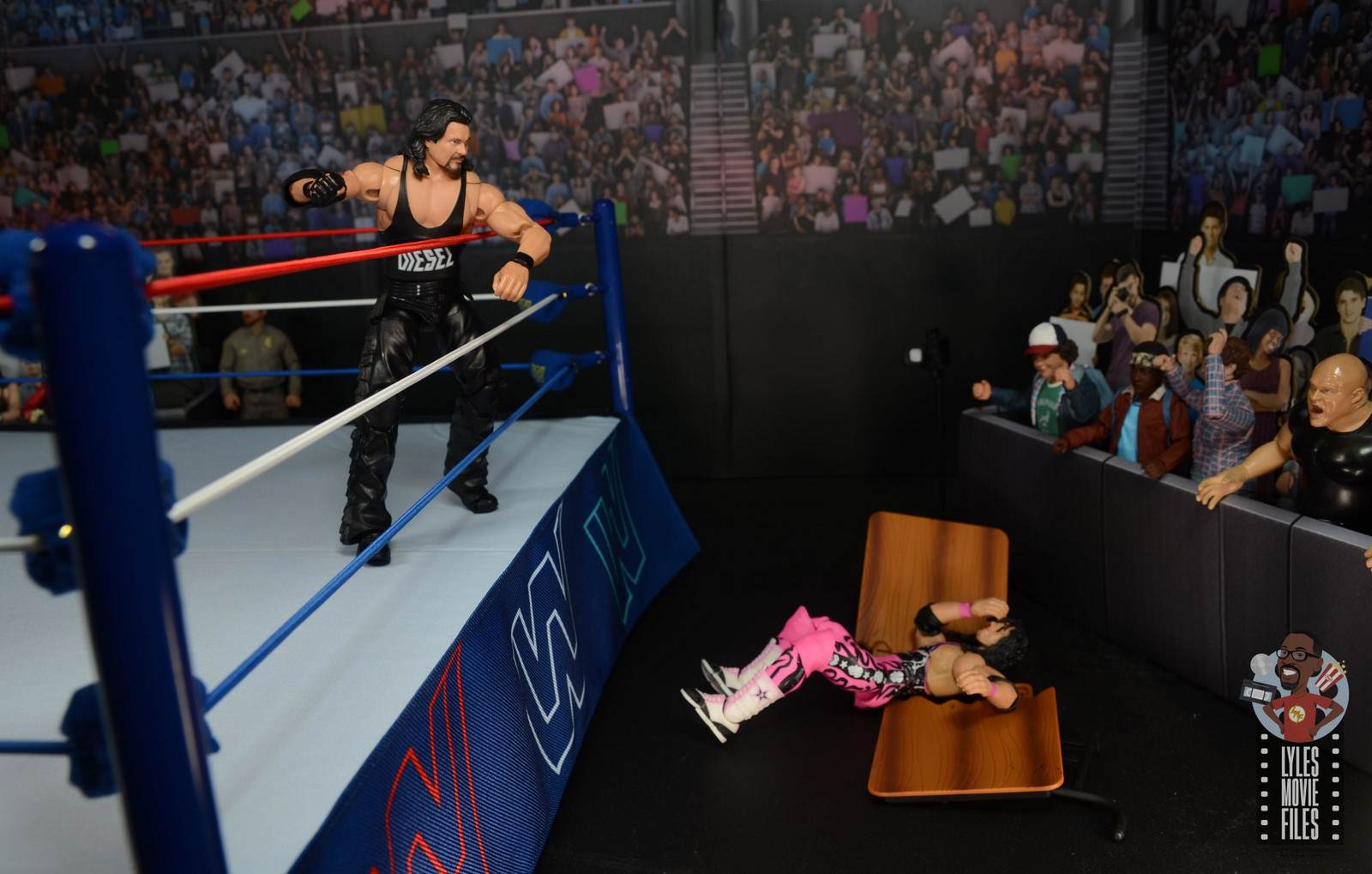 Accessories:  Mattel is still trying to work out the value with Ultimate Edition figures with their accessories. 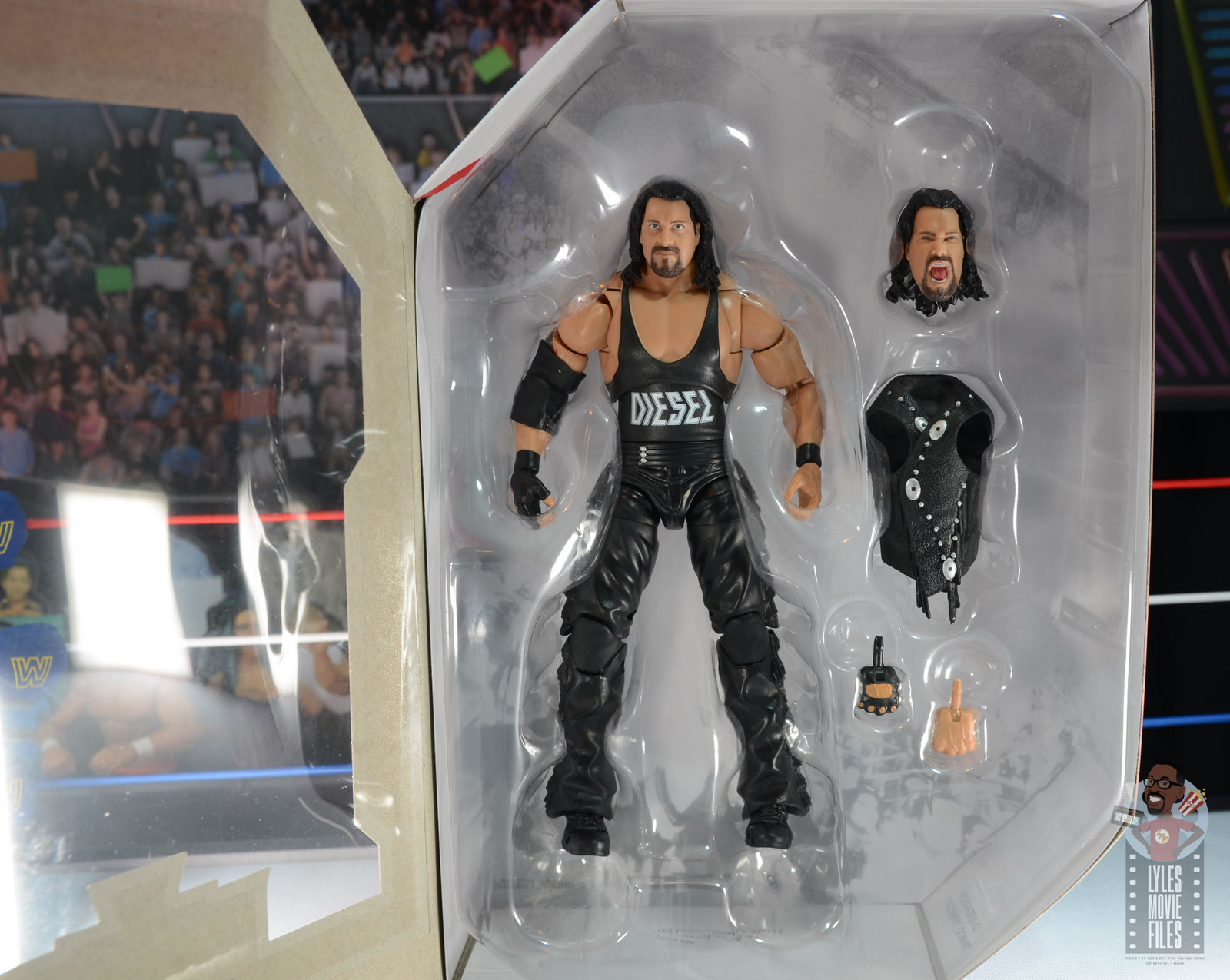 Diesel comes with an alternate yelling head sculpt. This is more expressive and has a more intense head portrait that fits Diesel better. It’s easy to imagine Diesel hitting this expression right as he raises his right hand to signal the jack knife. 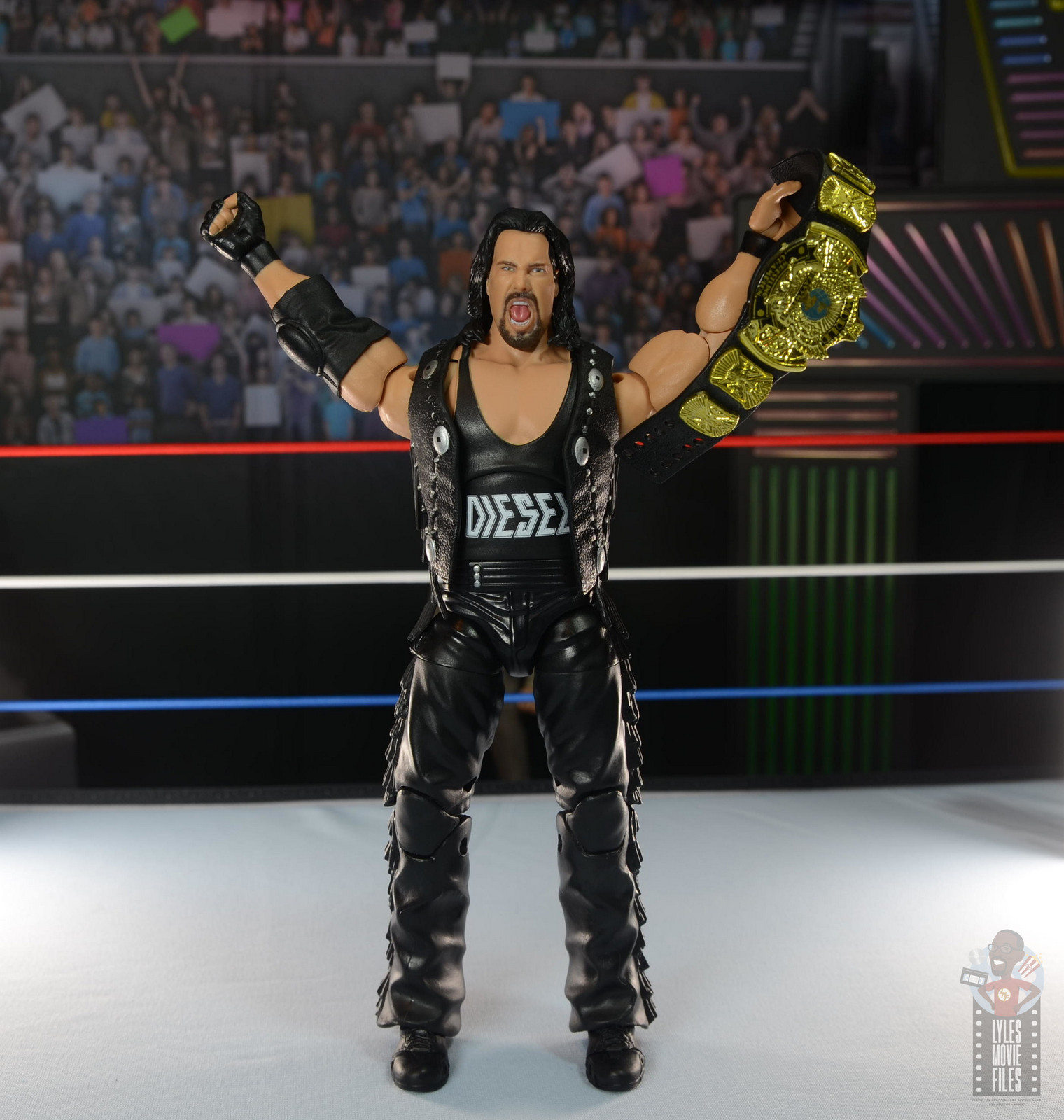 He also has two swappable fists. 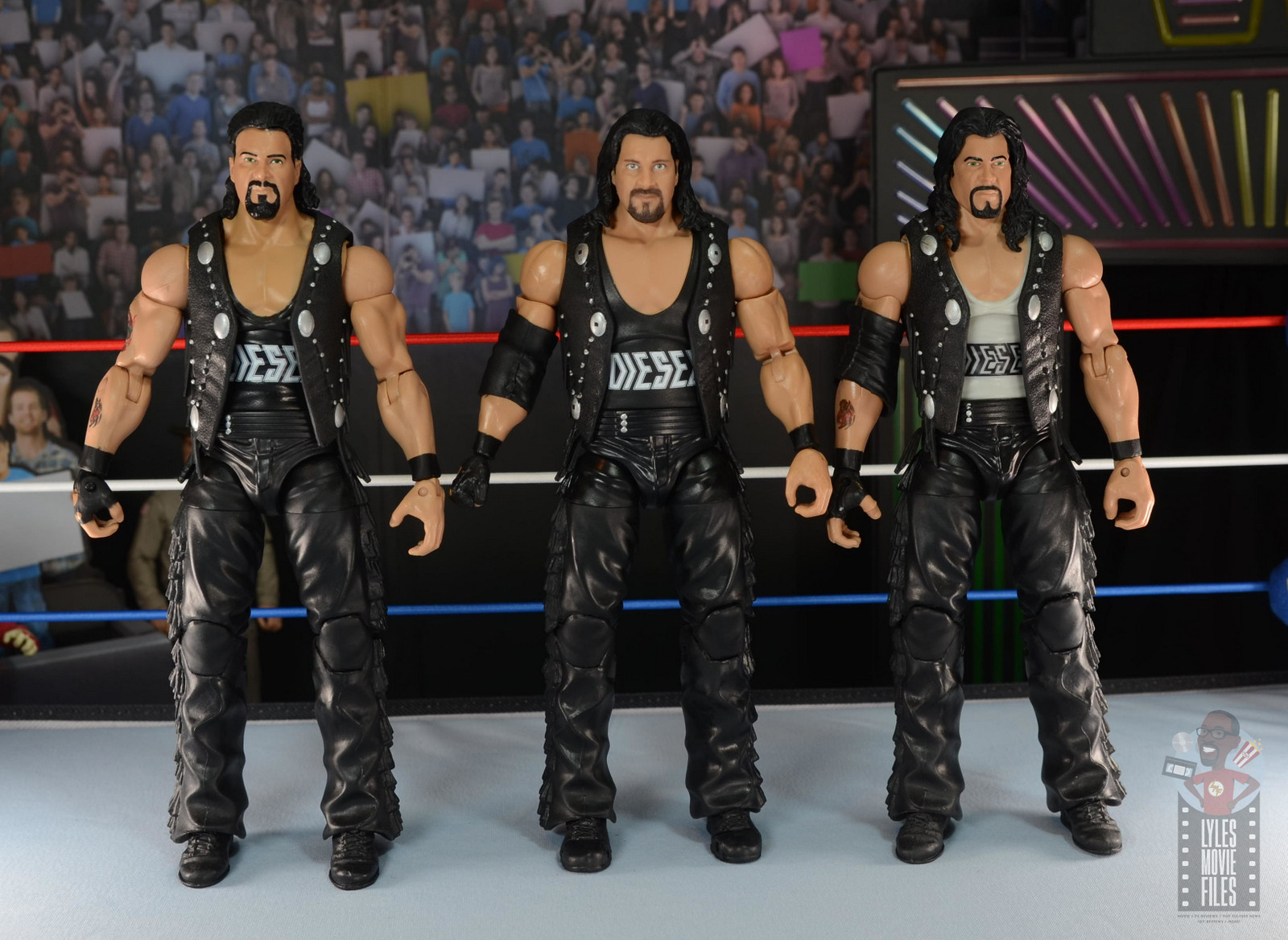 At first, I thought he had the standard Diesel vest that’s been included with the two previous Diesel figures, but it has some enhancements namely holes in the silver discs. 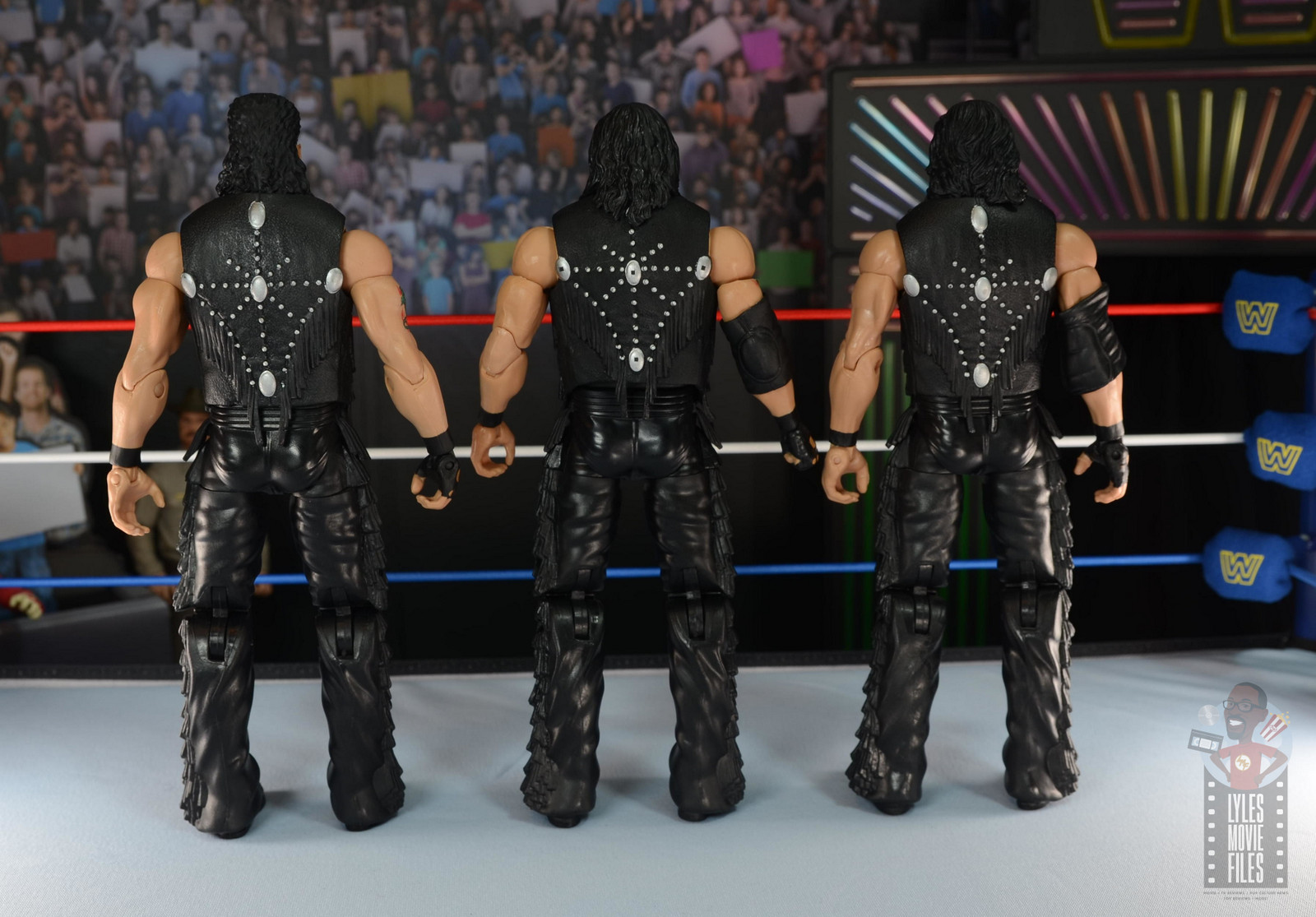 Since this is an Ultimate Edition figure, including the WWF eagle championship should have been a no-brainer. I would have loved for Mattel to make better use of this format and used a cloth tank top for Diesel’s shirt. That way they could have thrown in two or three different singlet tops for some variety. 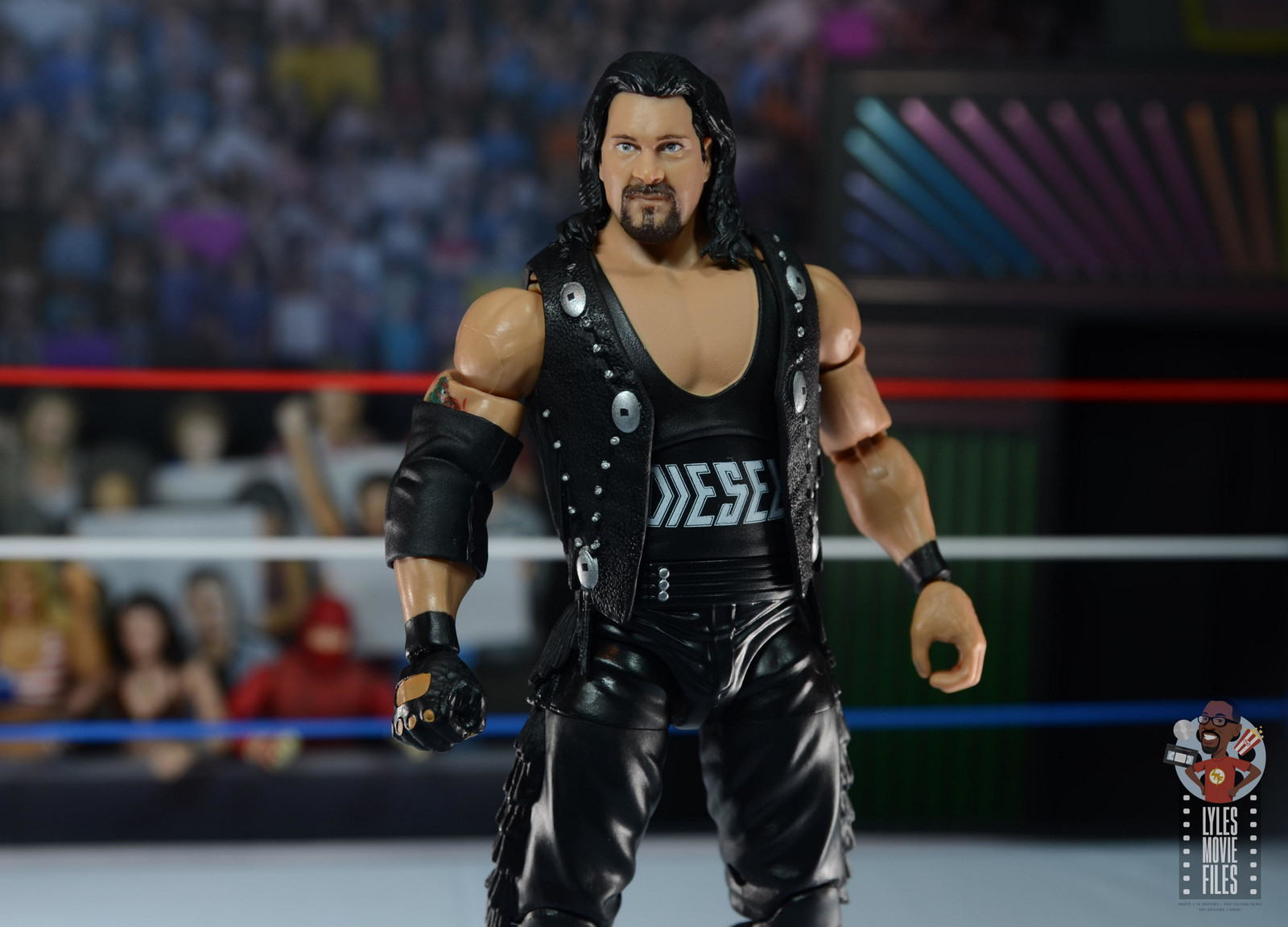 Worth it? As with any crowd funding effort, Diesel is technically a freebie that helps offset the cost of the project. A standard Ultimate Edition figure would now cost $32.99. On his own, Diesel isn’t worth that price tag, but as a bonus throw in for a $200+ arena he’s a much better deal. 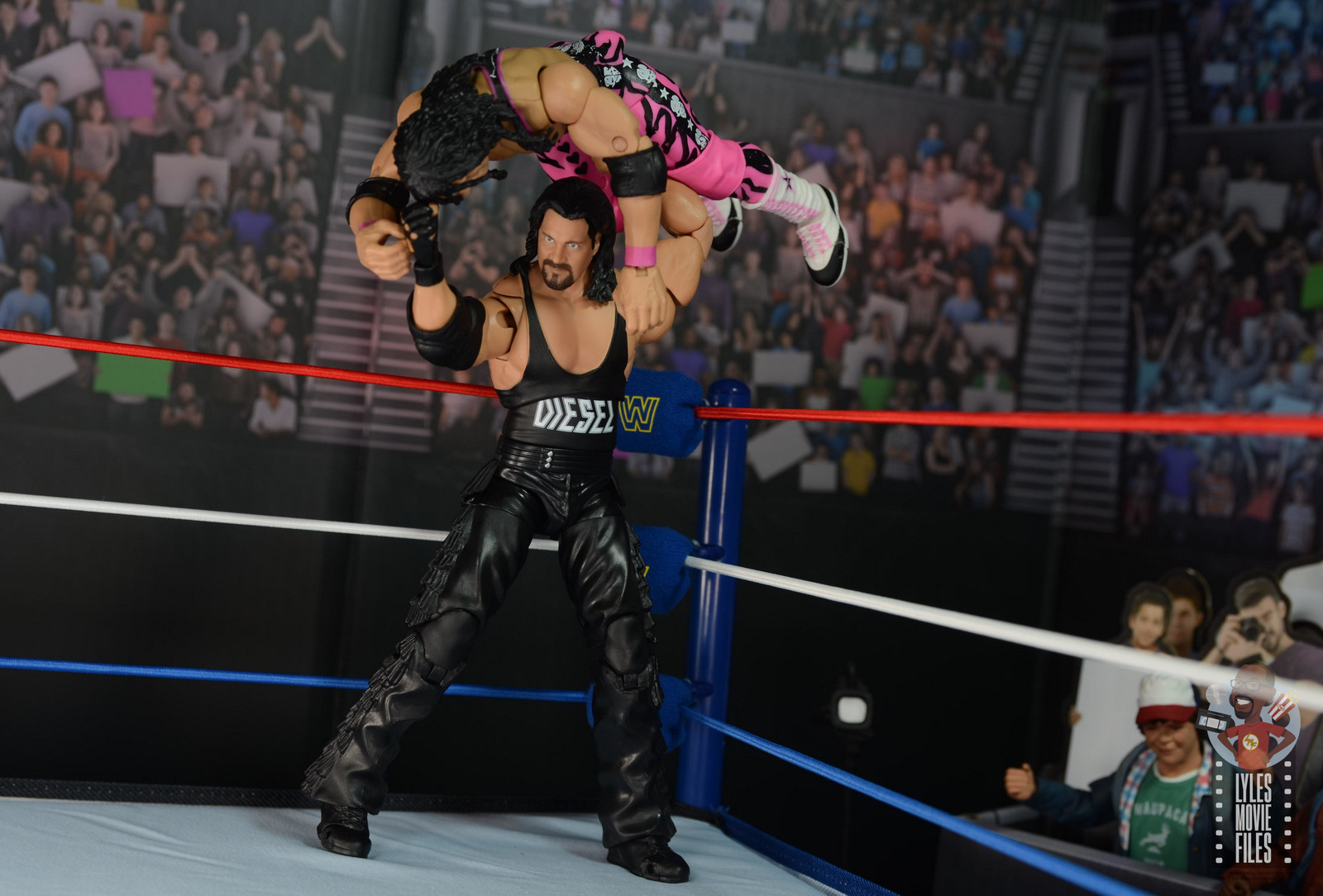 I absolutely wouldn’t recommend grabbing him on the secondary market under any circumstance as I imagine Mattel will eventually release another UE Diesel.

Diesel is a good enough freebie figure. I wouldn’t be nearly as happy if he were a standalone figure as he’s not that significant an upgrade over previous Diesel figures to pay a higher price point for him. 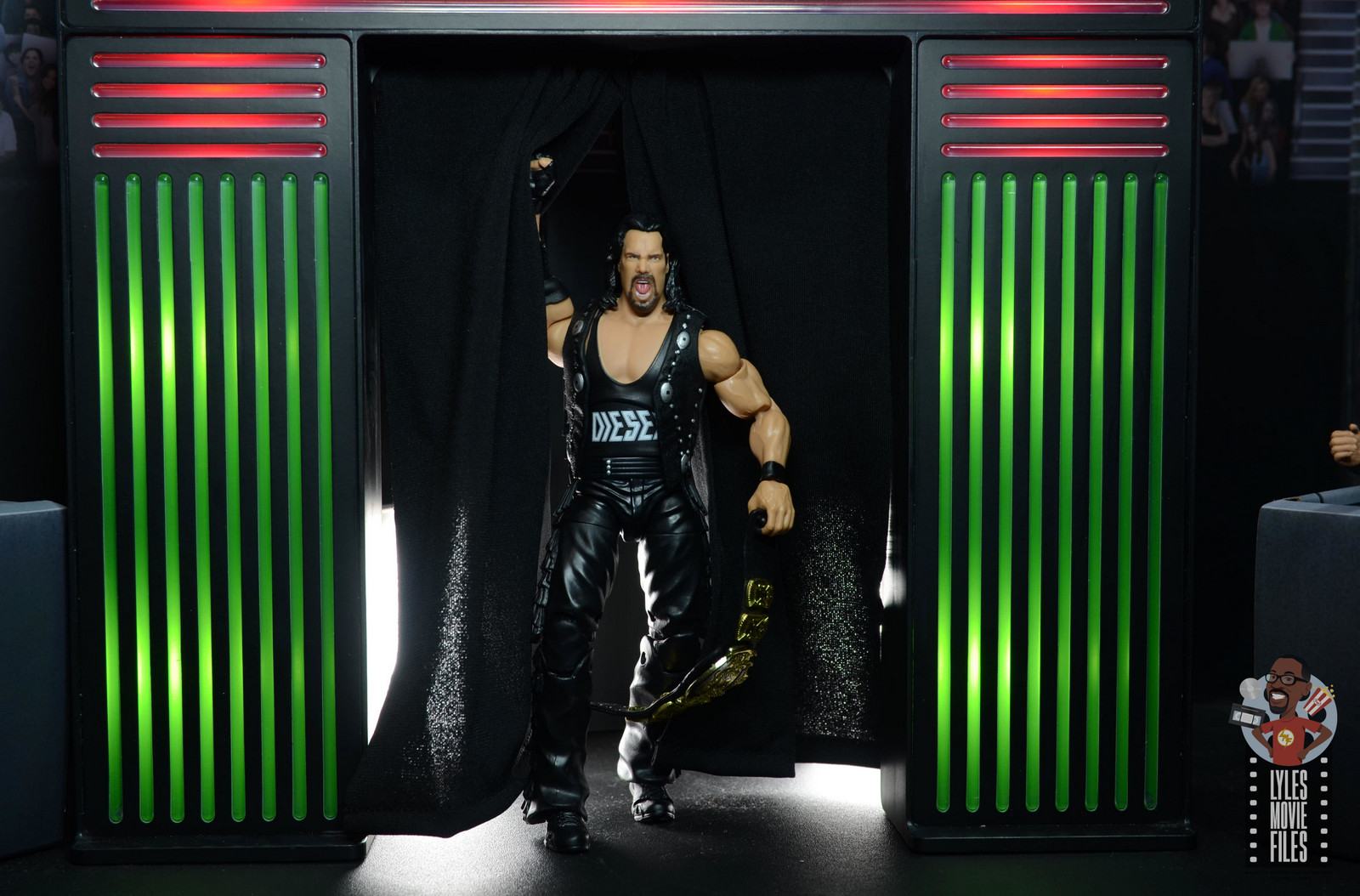 Where to get it? The only way you’re getting Diesel now is through resellers. Again, I’d hold off unless you’re a massive Diesel/Kevin Nash fan.