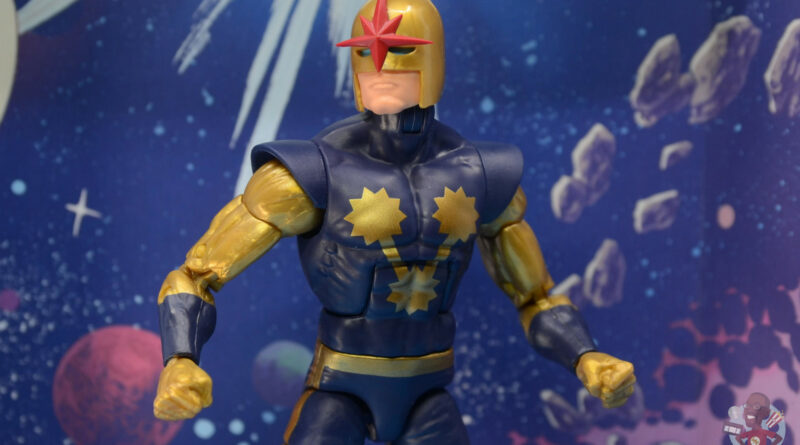 Occasionally, Hasbro can create its own problems. In this instance it came the second a Marvel Legends Night Thrasher was released. That immediately put the New Warriors on the clock in terms of wish list priorities. We’ve gotten a few members and Firestar marked another founding member. Now, I’m looking at another with Nova.

Nova was the New Warriors’ resident hothead most prone to fly off into trouble and argue with Night Thrasher about tactics and strategies. This has been a figure I’ve been looking forward to ever since he was announced so let’s rocket through to see if Nova delivers.

Packaging:  Nova gets the classic The Man Called Nova logo from his 1970s limited series.

I can’t place the side and rear artwork. Maybe it’s another original piece? Since he’s an exclusive we get to see more of the artwork and that’s always a nice bonus. 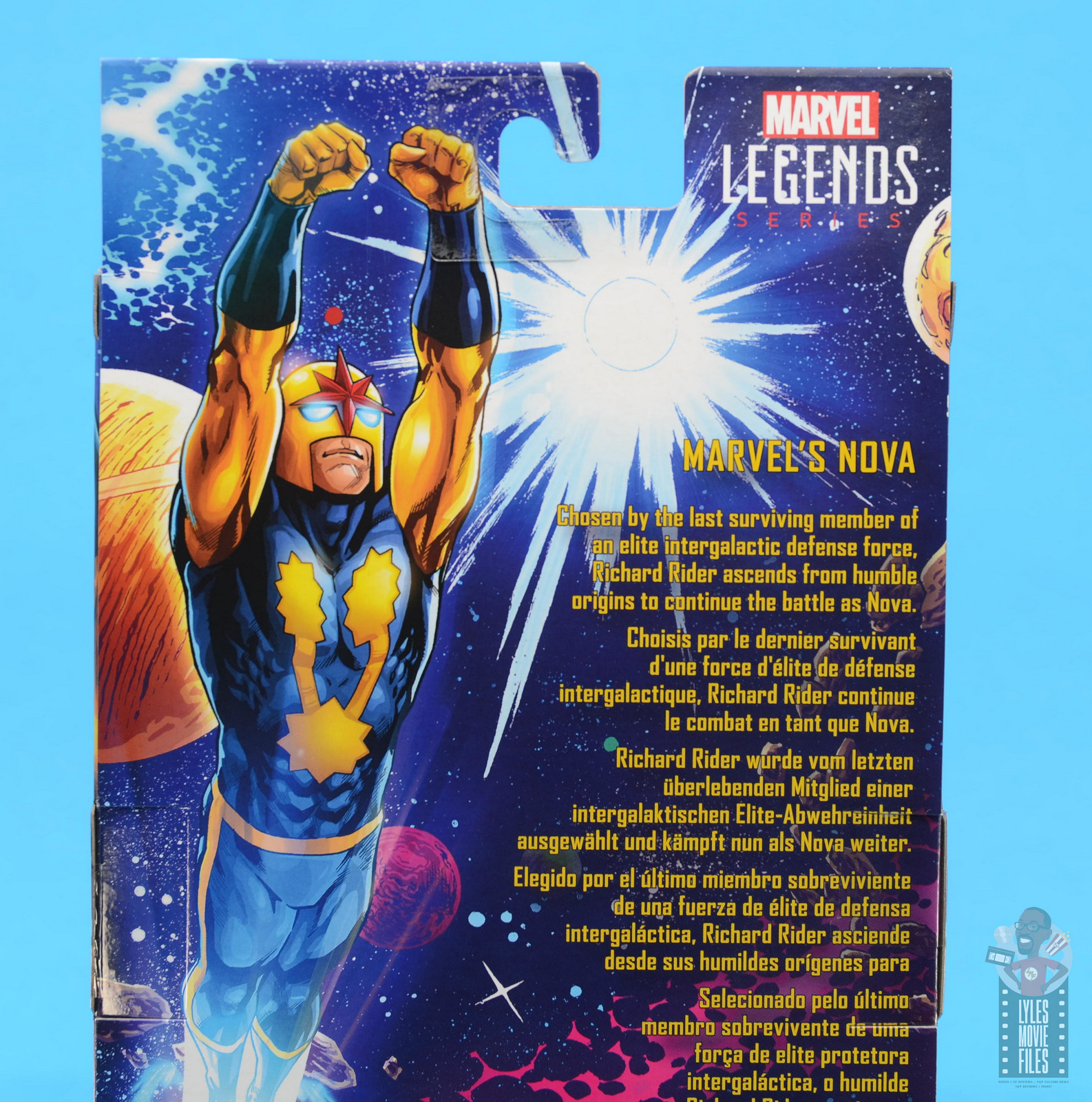 The bio does a decent job of framing Rich’s origins differently than Green Lantern’s backstory, which is all you can ask for Nova.

Likeness:  Hasbro sculptors “messed” up on one pivotal aspect of this look. Nova’s eyes should be visible and not power glowed over. This is true to Nova’s look from the 70s series. 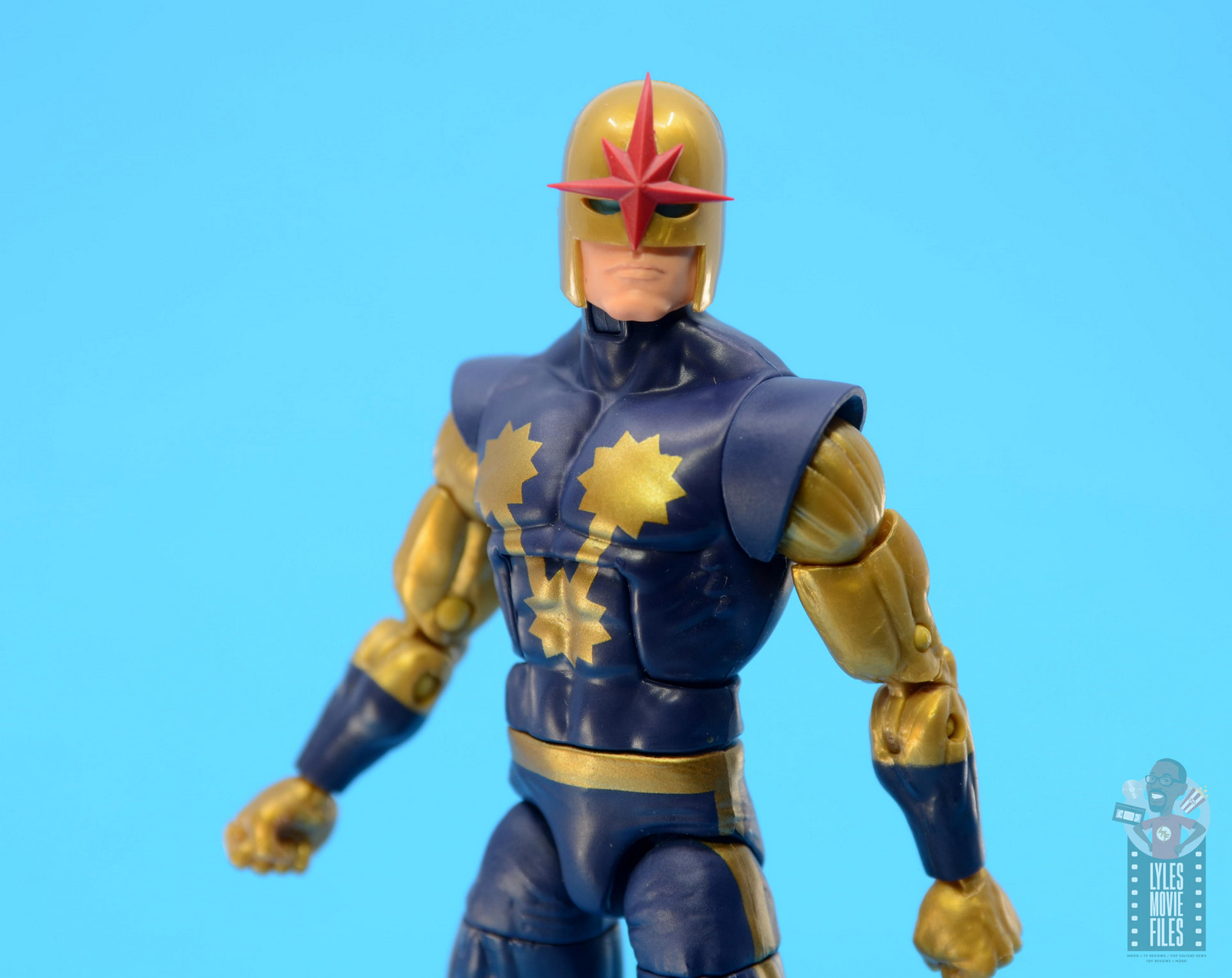 That’s an interesting decision. This wouldn’t be so frustrating if Hasbro included an alternate open eye mask helmet for his New Warriors and 90s look.

I wish Nova had more of interesting expression to show off more of his personality. The neutral expression is fine, but it could have been more engaging. 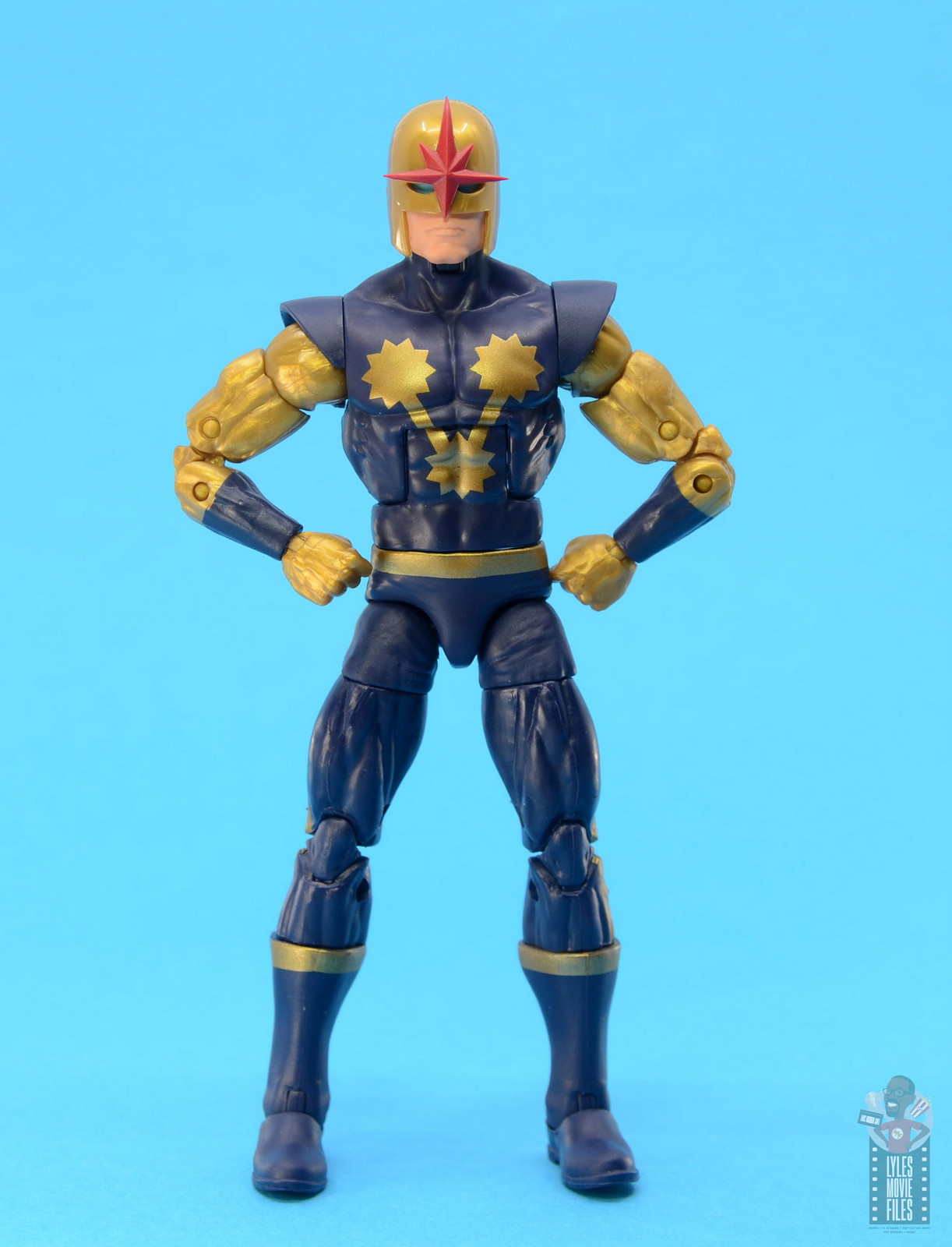 Beyond the helmet aesthetics, Hasbro handled the rest of the outfit just fine with the raised shoulder points. Most of the outfit work is just done through paintwork, which isn’t a problem if the paint is fine as it is in this case.

Paint:  Hasbro has been inconsistent with the decision on gold vs. yellow. We’ve seen that with Iron Man and again with Nova. In the comics, his New Warriors outfit was undeniably yellow while his Nova Prime look is more gold.

Going with gold here tones down the brighter, bolder New Warriors era Nova. It could have been aided by a lighter shade of navy blue. In something that’s also becoming a trend with 2021 releases, the card art has the iconic take of a character while the figure has some random issues whether likeness, expression or colors.

Paint choices aside, the paintwork actually came out nice and crisp without any issues. The chest tampo was solid and the gold didn’t have any blue bleeding through it. 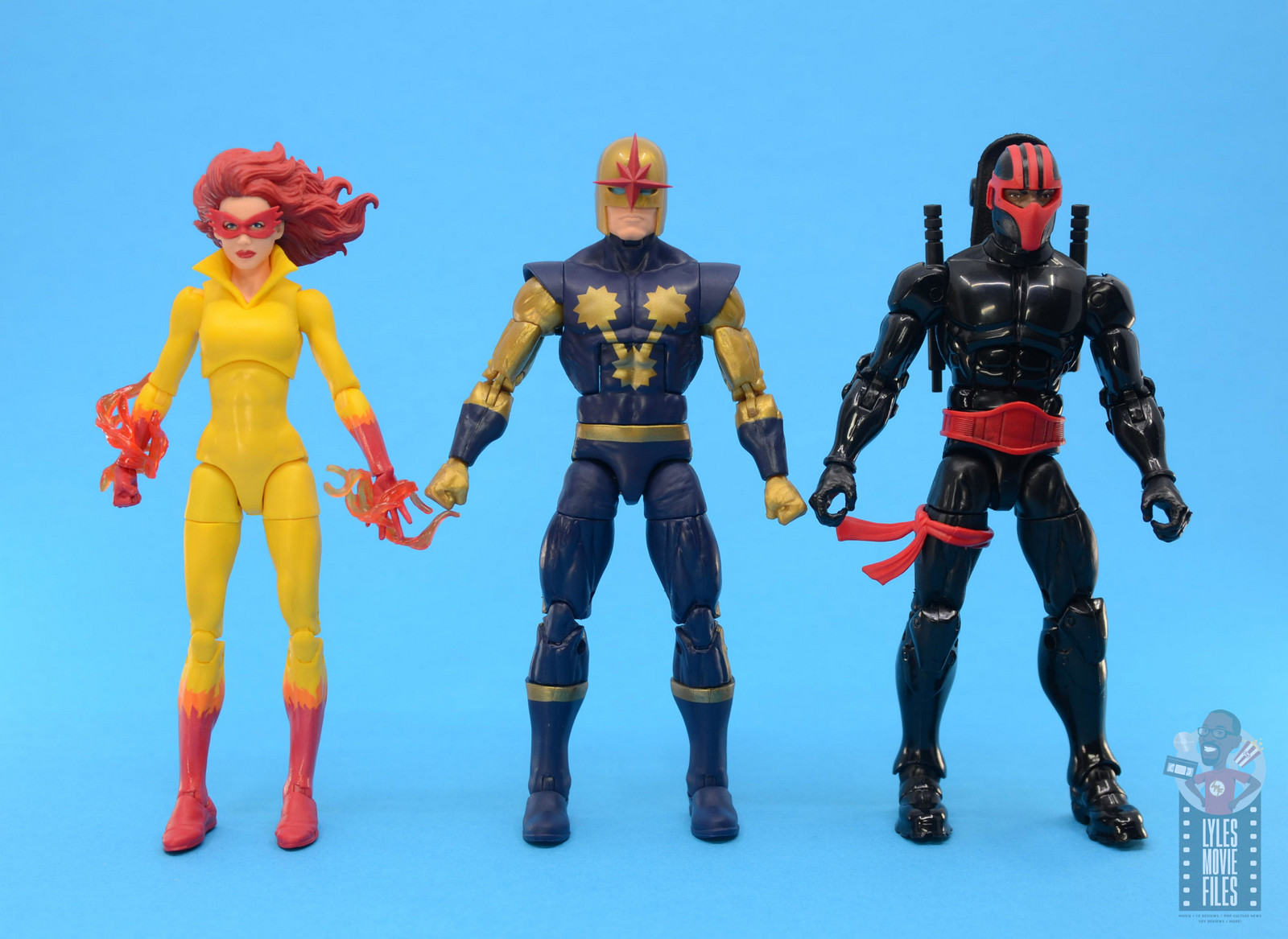 Scale: It’s Nova was the same height as his New Warriors teammates besides Rage and that’s carried through at least with Night Thrasher. 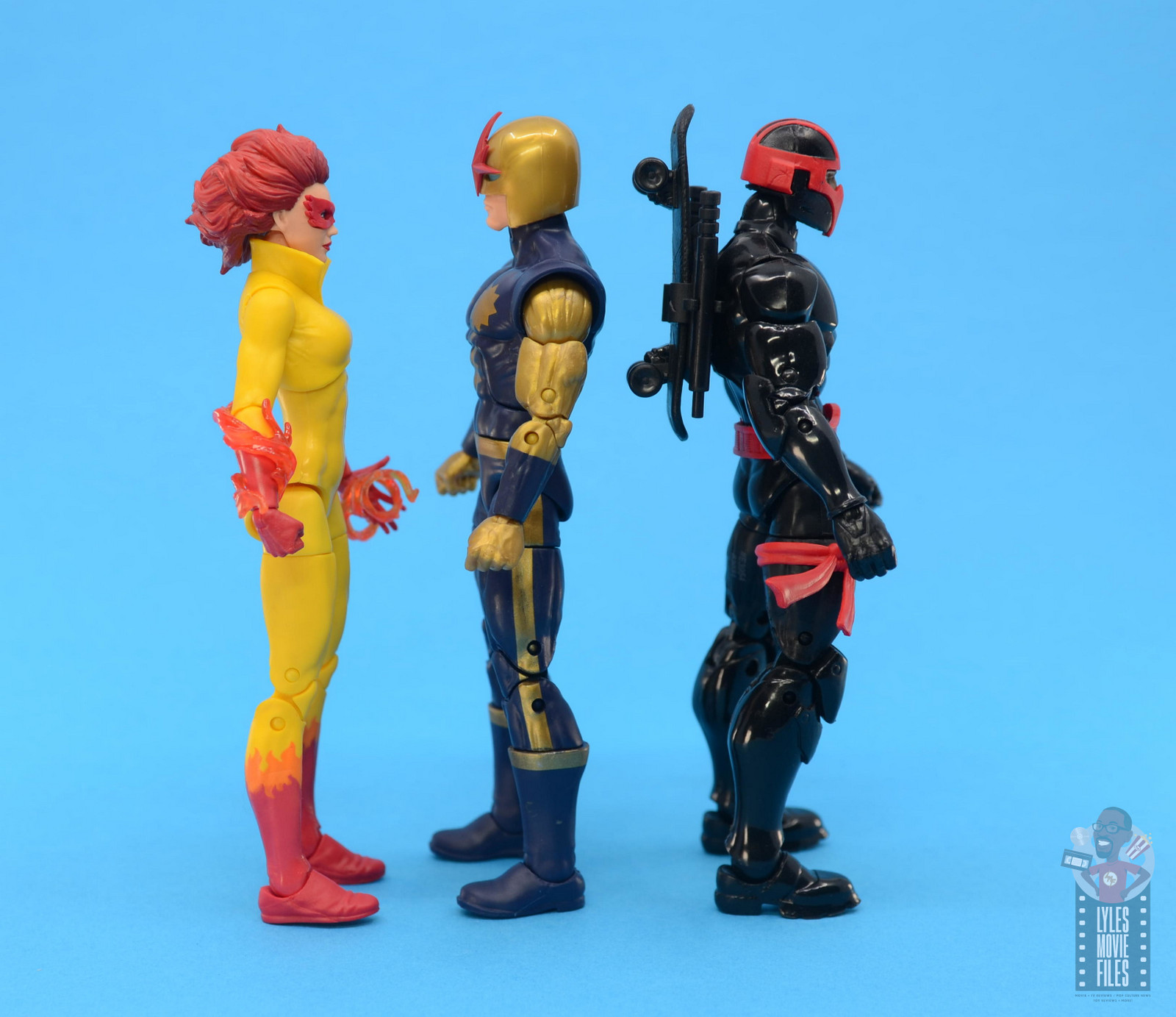 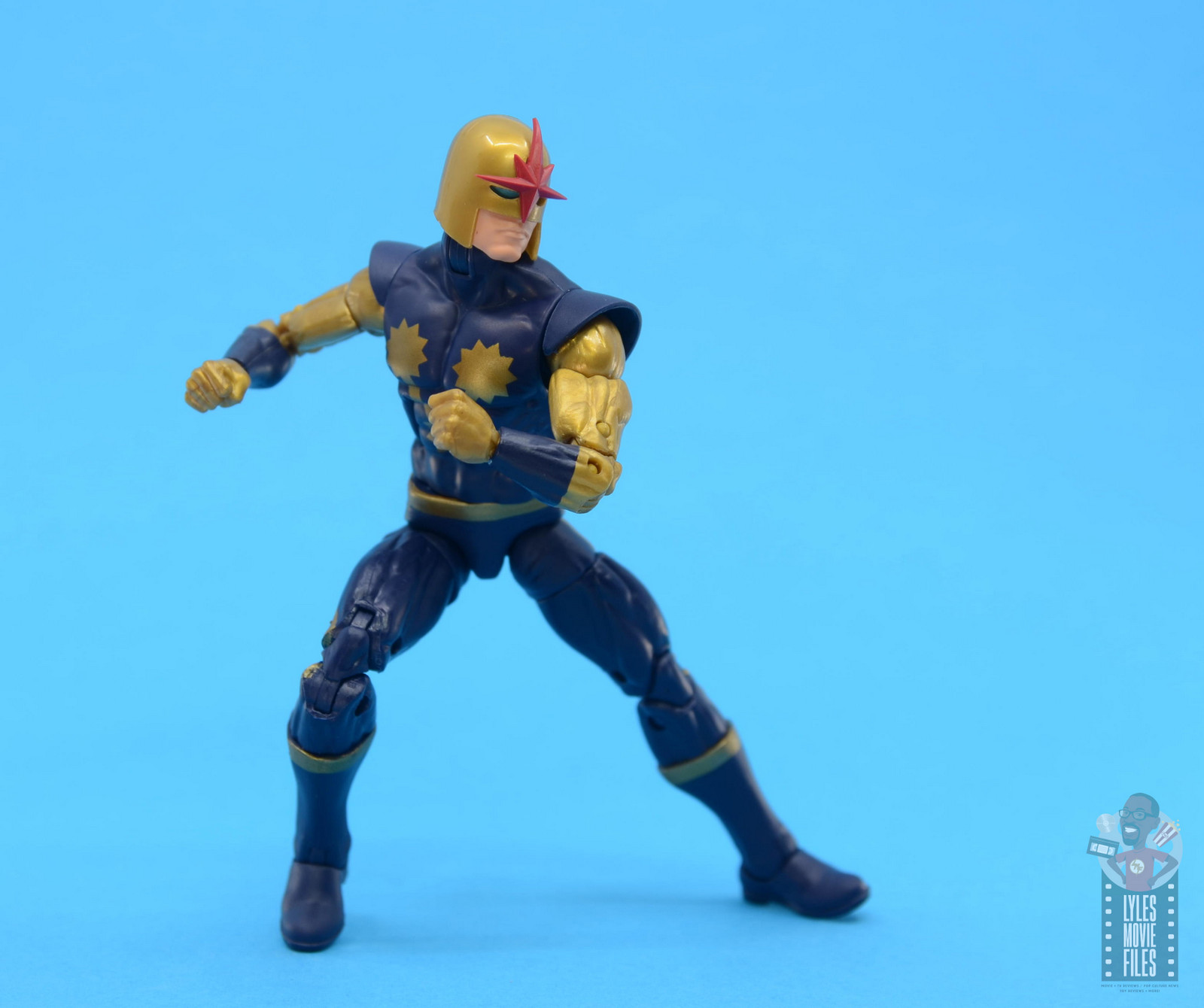 Articulation: Nova attacked like Cannonball but would also do more attack strikes with his fists on a ground and mid-air level. He’s using the Bucky Cap mold, so you know exactly how it moves at this point.

As always, the tiny feet make some poses trickier than I’d like, but he still is fun to pose. 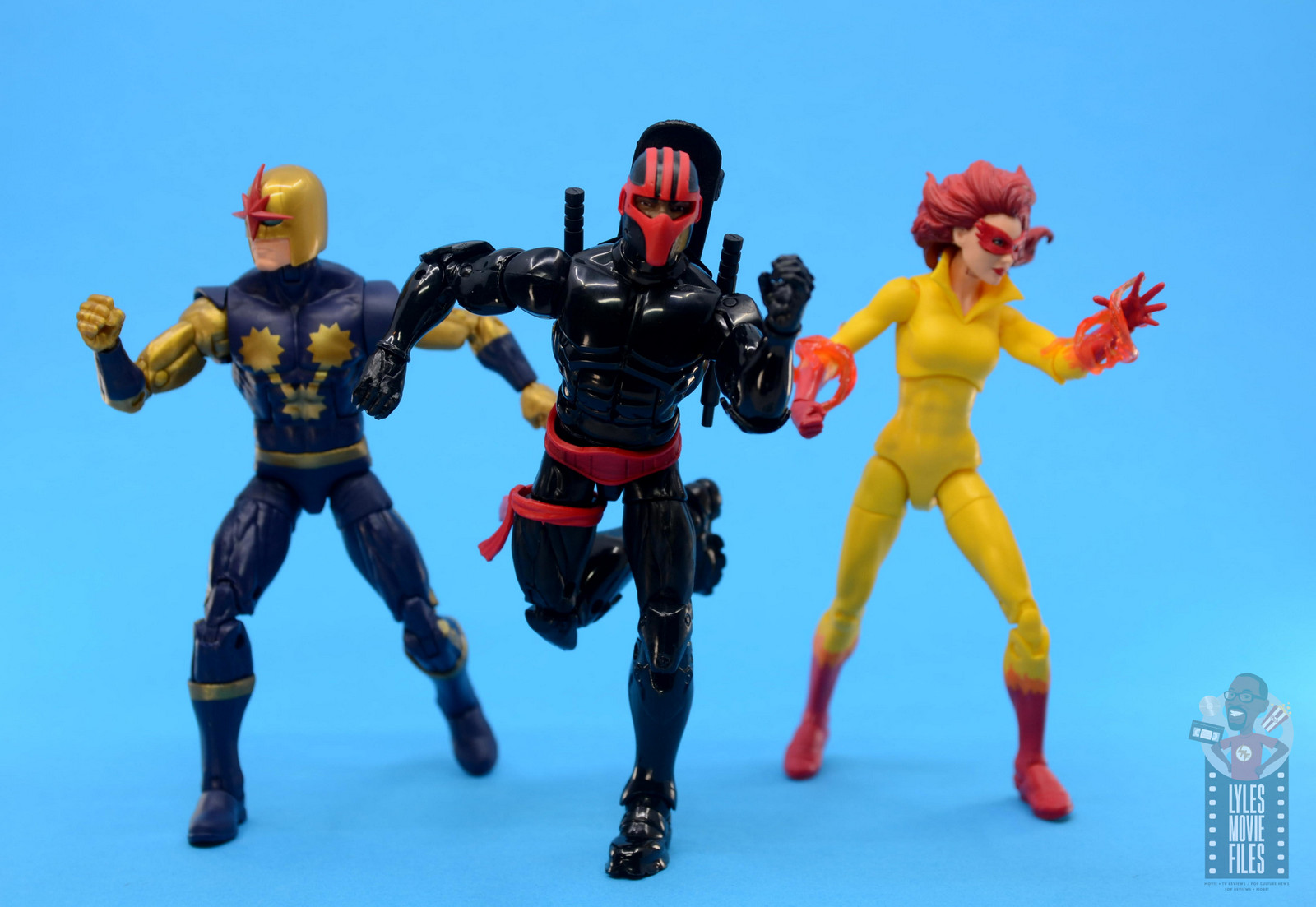 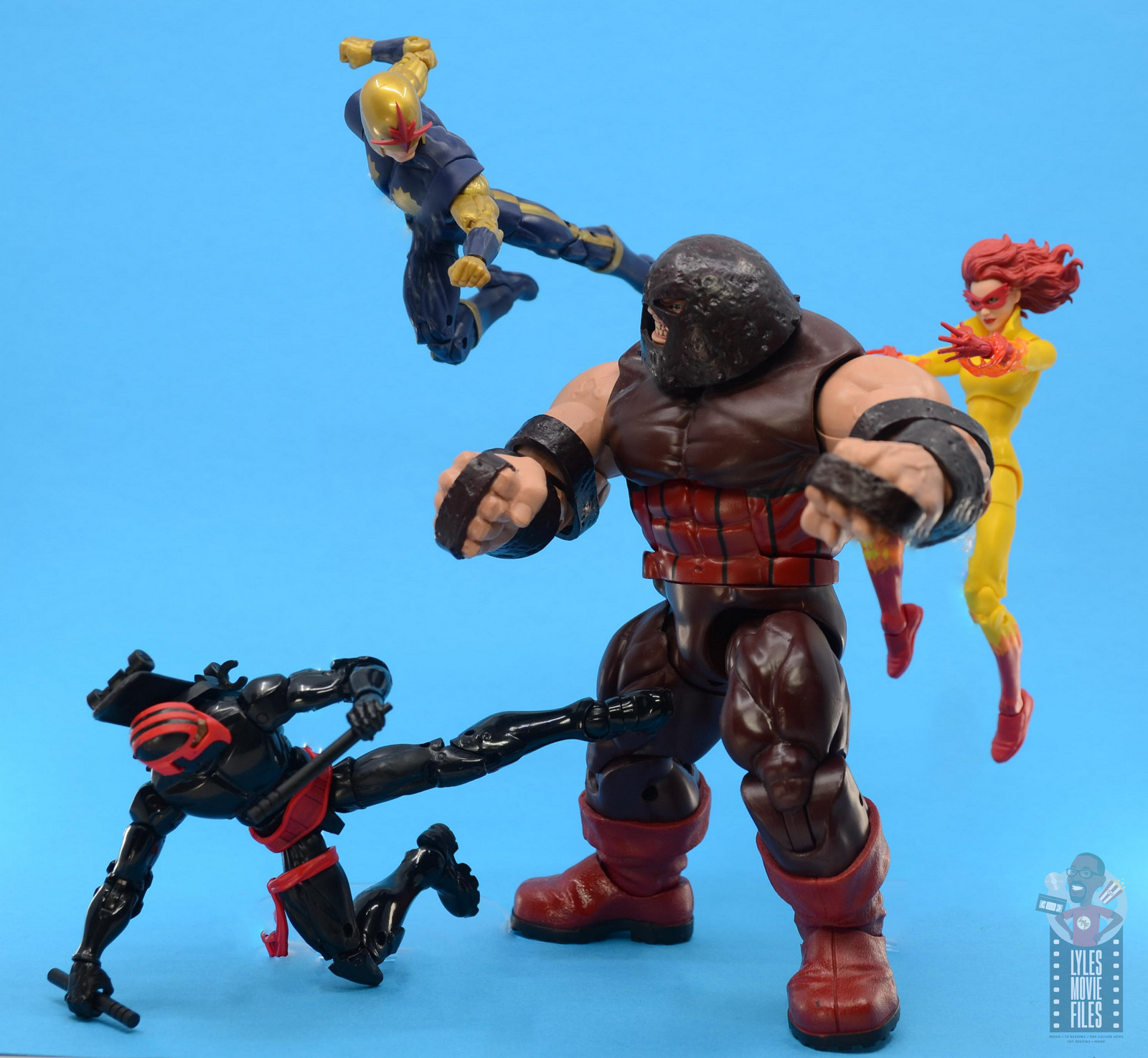 Accessories:  As a Walgreens exclusive of course, Nova doesn’t have a Build-A-Figure piece. 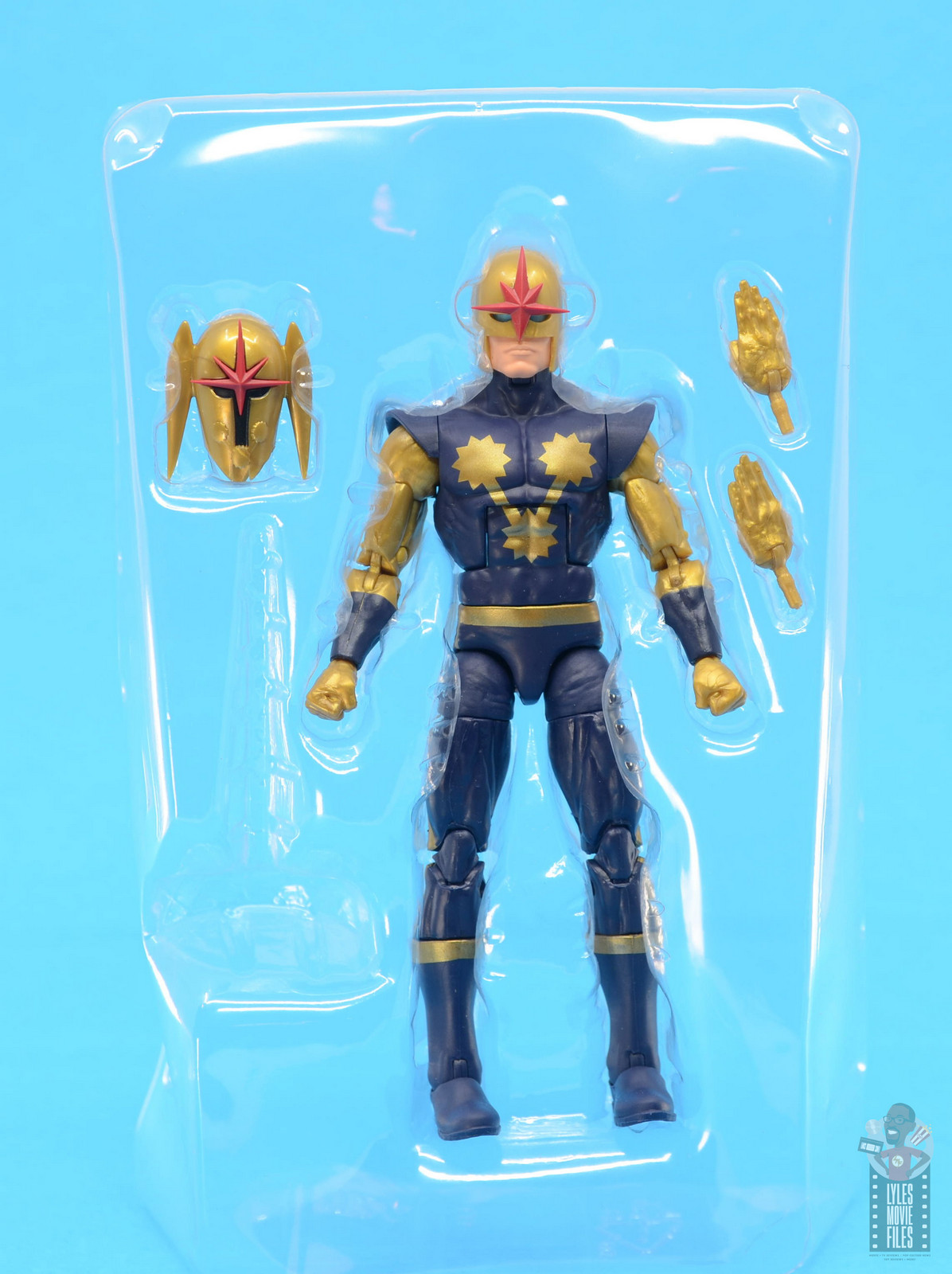 He does come with some useful accessories however with outstretched flying hands. Additionally, he comes with another member of the Nova Corps, Qubit. Qubit is a nice addition and an appreciated extra. 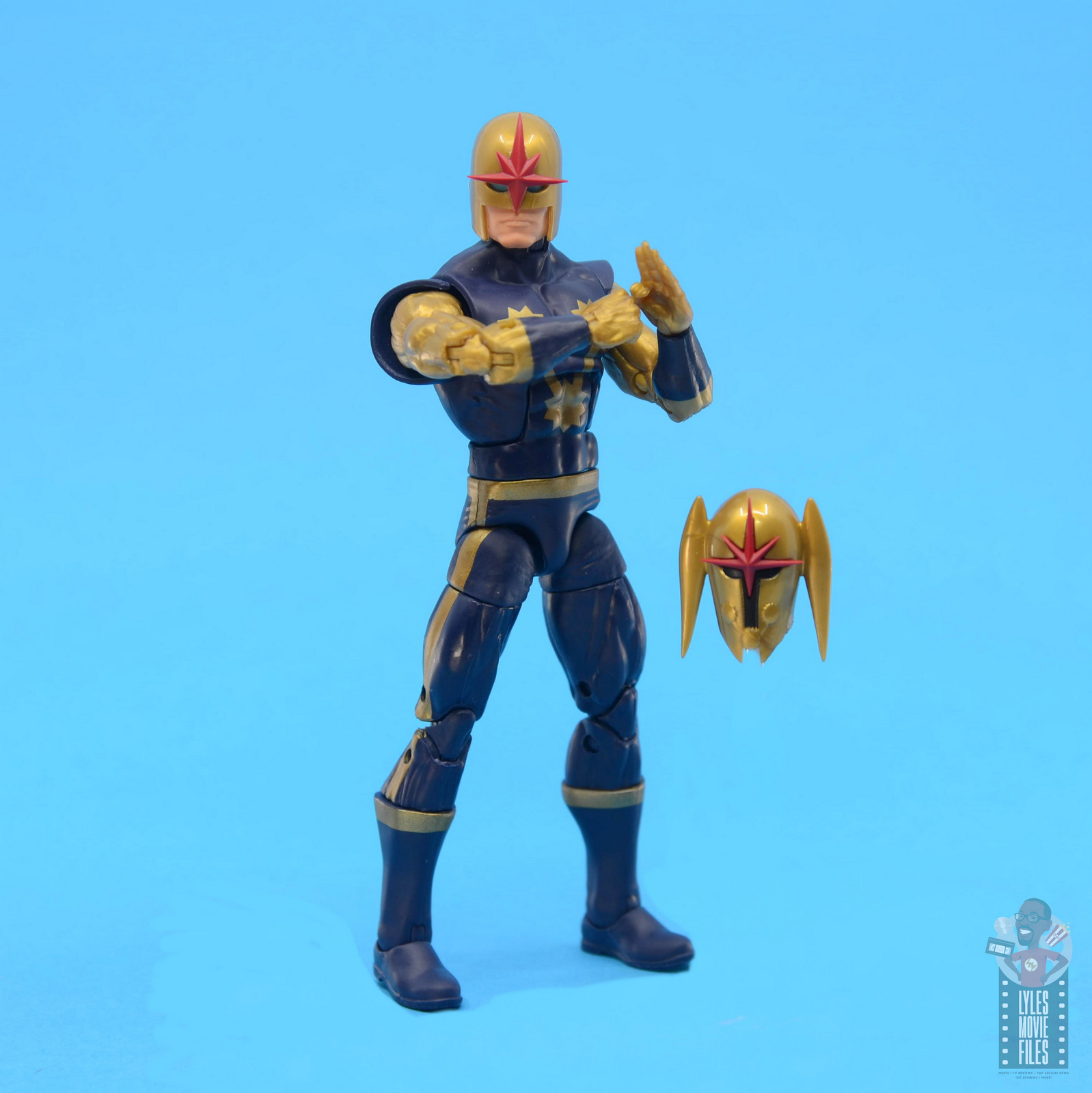 Worth it?  Nova is up for the standard $22.99 price. The good thing this time however is he was available for store pickup so if your local Walgreens didn’t have him in stock, you could avoid paying the shipping costs to get him.

I’m not loving that Hasbro went with gold for Nova’s costume colors as it feels like another botch just to correct it later. I wish the head sculpt had more personality, but overall this is a good figure and it’s nice to add another New Warriors member to the display. 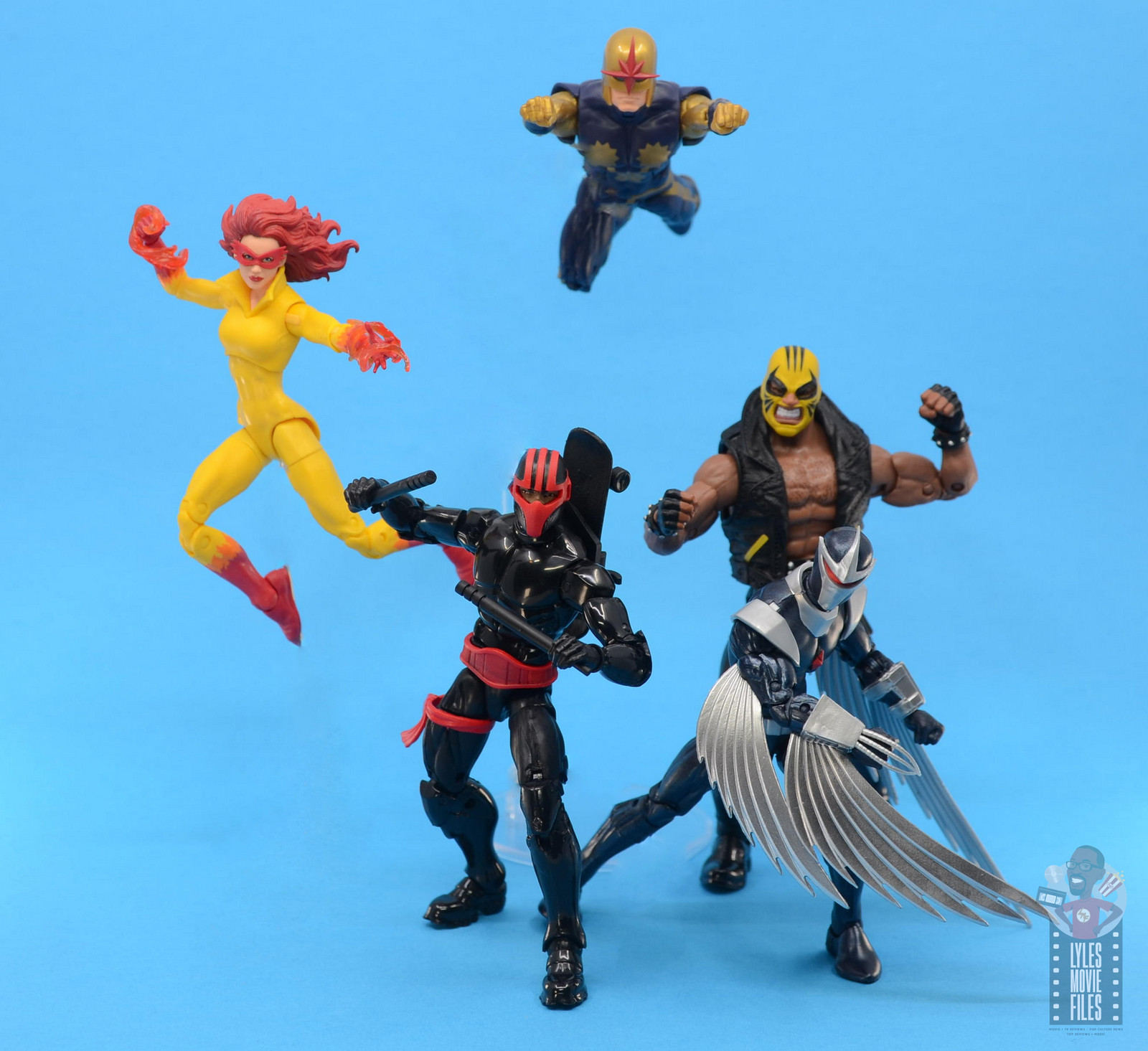 Where to get it?  Nova’s a Walgreens exclusive. I searched for seemingly months to find him in stores so naturally after I ordered him online, I found one in the store. If you completely strike out there, he is now up on Amazon from resellers at a higher price point.