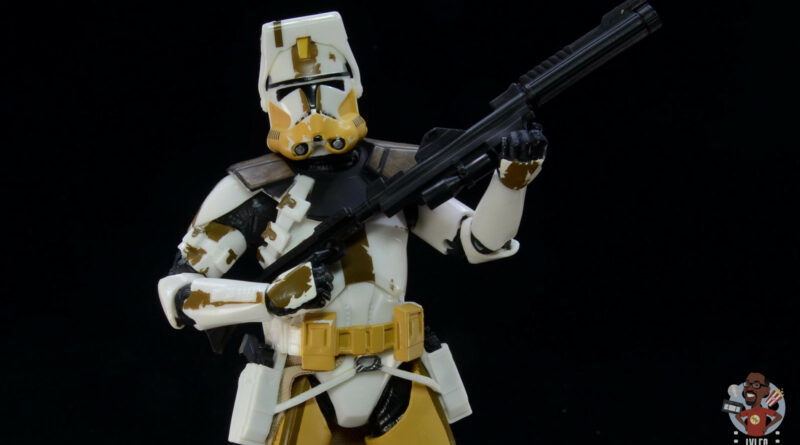 Commander Bly wasn’t as prominent as some of the other cool looking clones. And he only appeared in three (!) episodes of the Clone Wars.

Like Commander Cody, Bly worked almost exclusively with one Jedi. In his case it was Aayla Secura. Unlike Obi-Wan, Aayla was unable to avoid Bly’s attack when Palpatine executed Order 66.

I’m all about adding to my Clone Wars era Clone Army and Bly is not too far behind Rex and Cody for me. I missed him earlier and was excited Hasbro offered another chance to get him in the Black Series line. Let’s see if he was worth the wait.

Packaging: This is more of an old school presentation of the Black Series figures with a gold gradient and a lighter greyscale image of the clones. 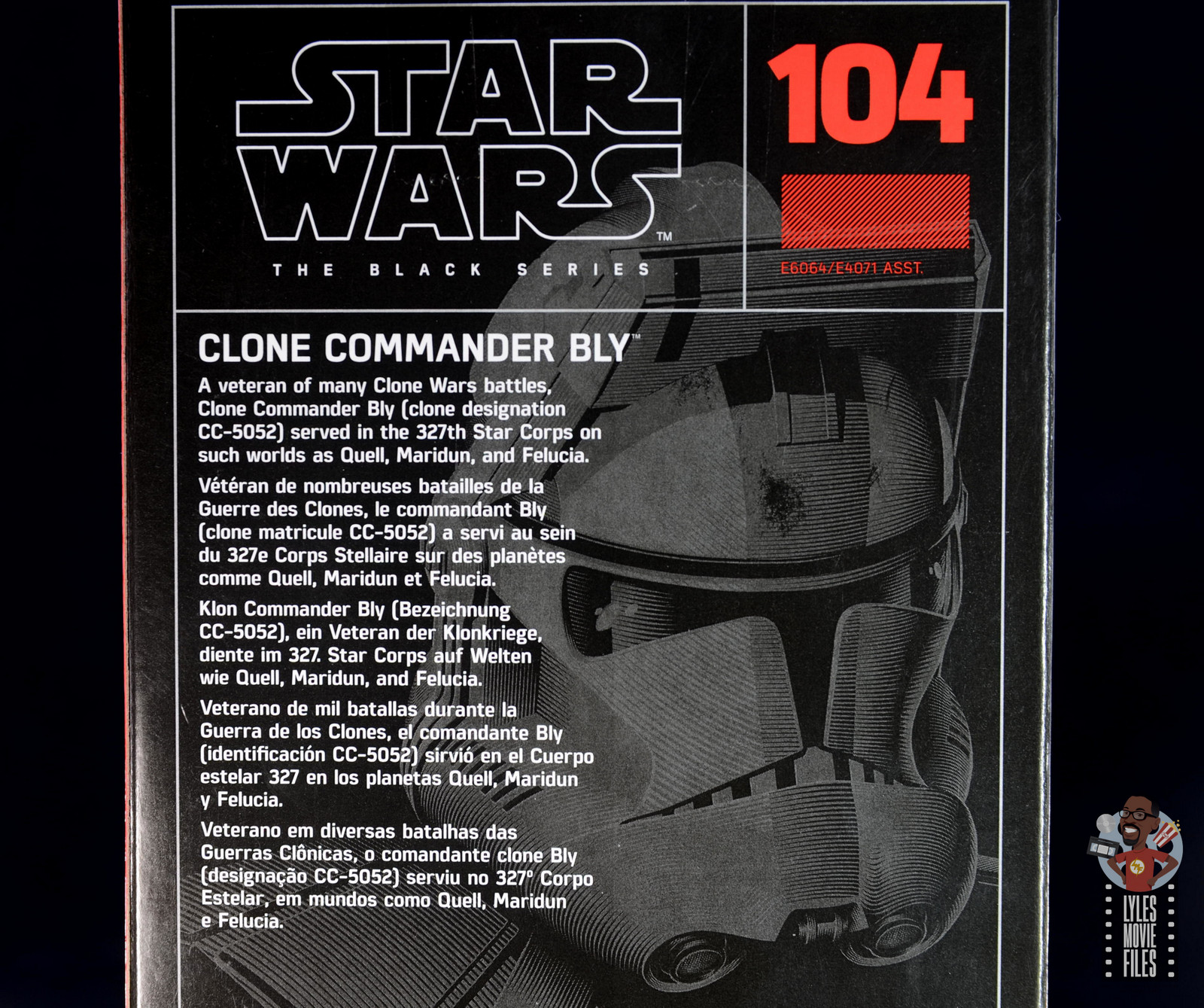 The terrific bio provides a good overview of Bly’s heavy experience tenure during the Clone Wars.

Likeness:  Hasbro reused the standard Black Series #14 Attack of the Clones clone trooper figure, but he’s got enough unique elements to make up for it. 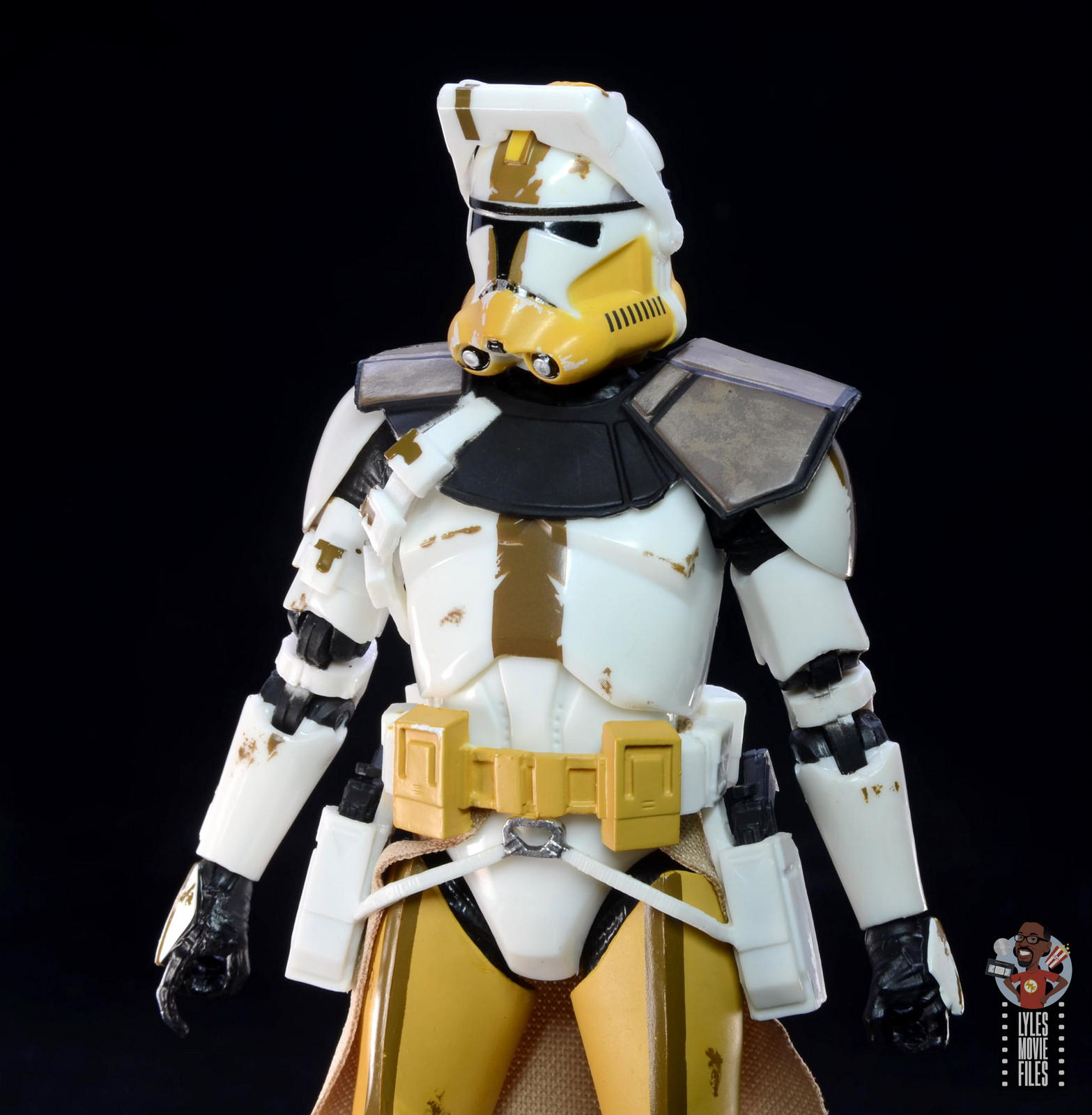 Bly is one of the more unique looking Clone troopers we have thanks to all of the numerous additions to his basic armor. He’s got a set of macrobinoculars, giving him a nice tweak with a visor-like setup. 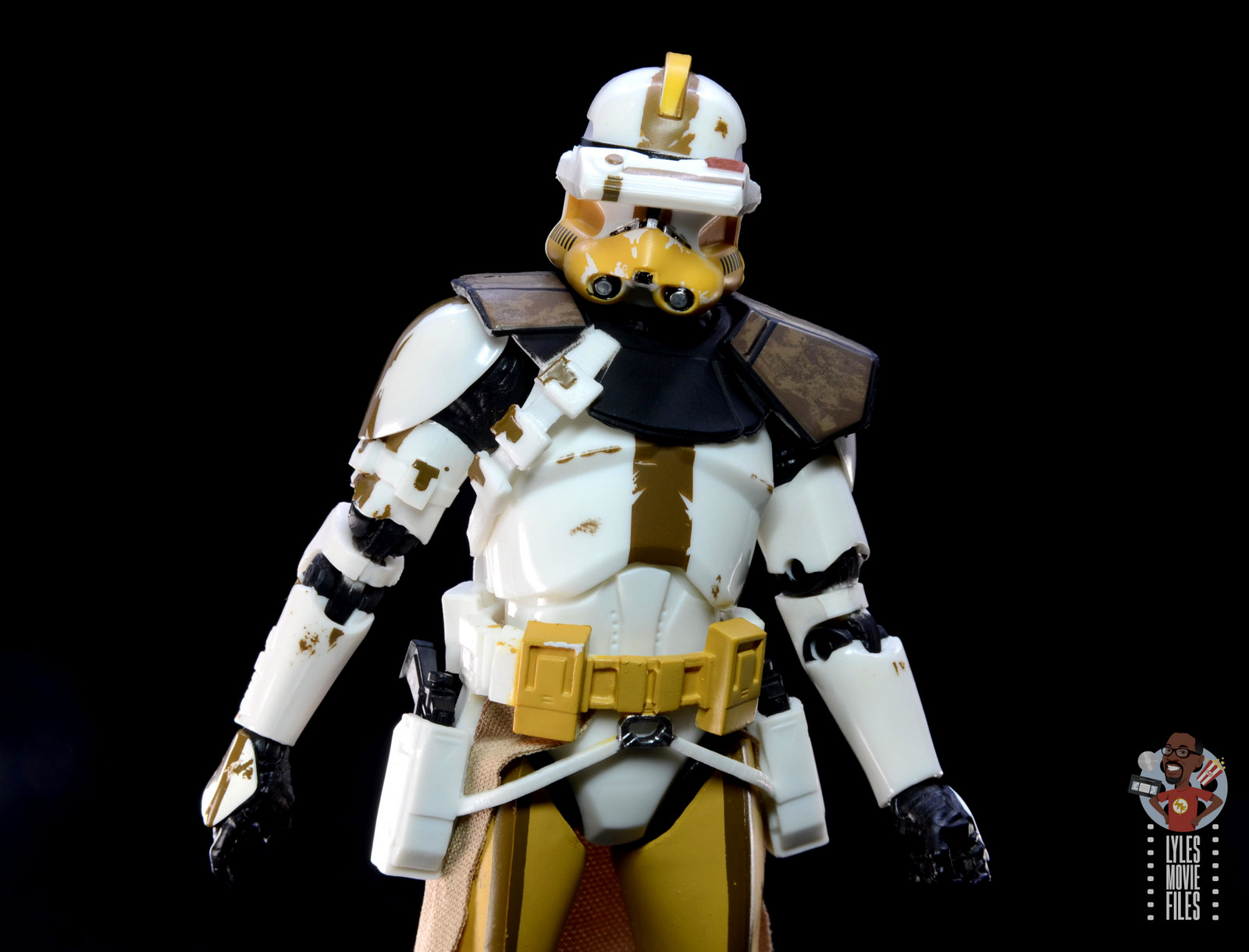 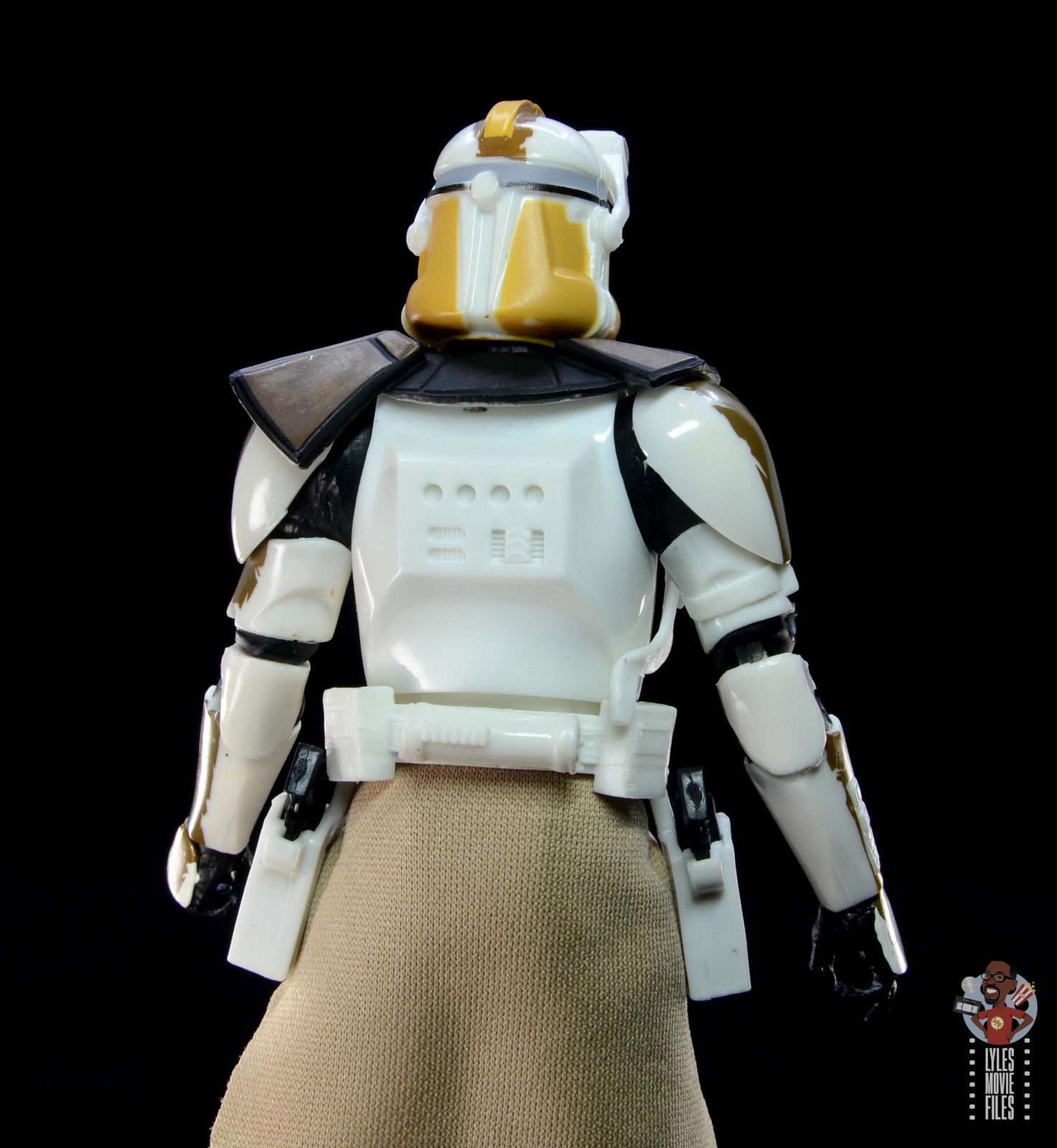 As with every ARC Trooper, Bly has the shoulder pauldron and collar piece with an ammo pack around his right chest plate. He sports a double holster and a cloth kama. 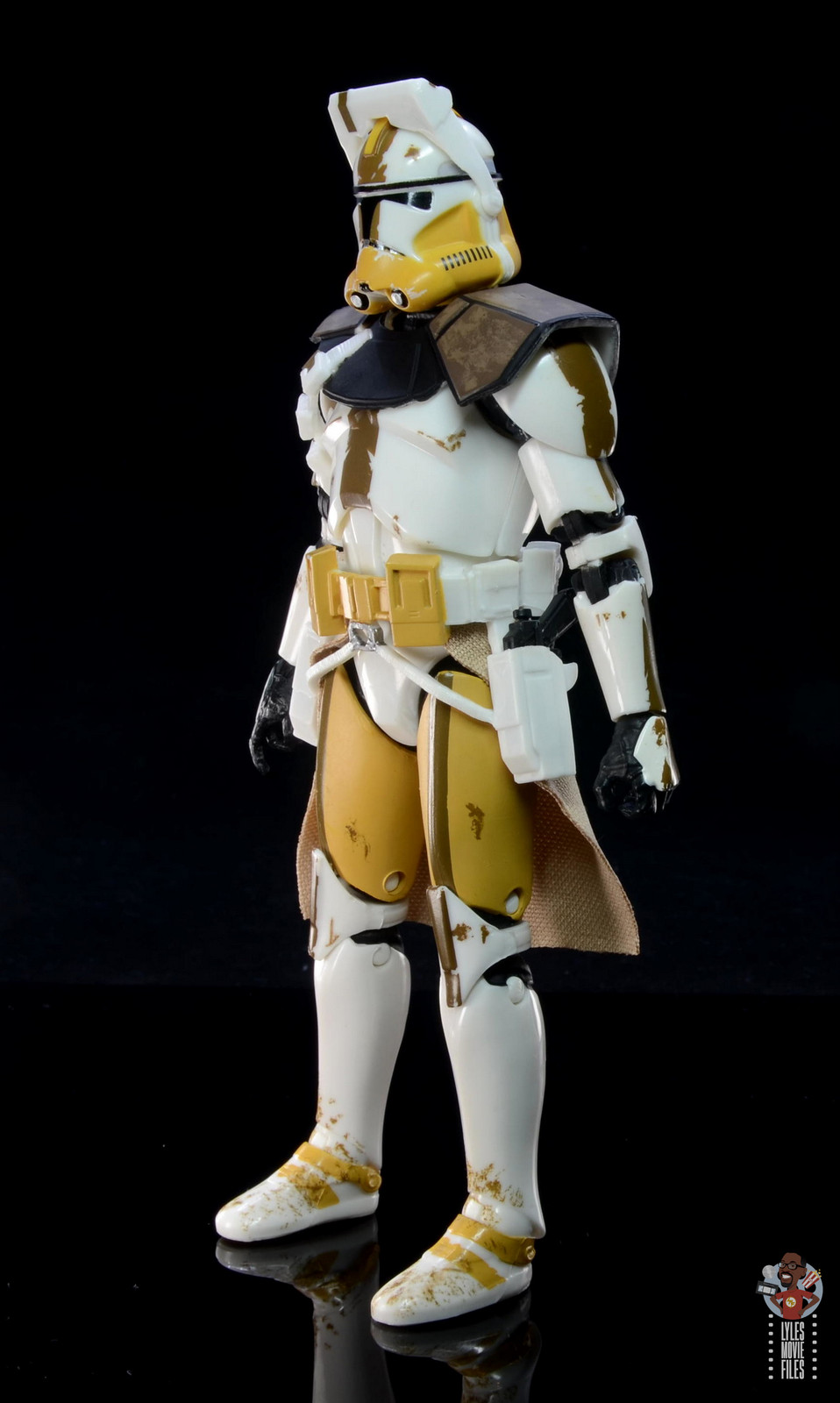 Paint:  Bly’s paint work is solid. My favorite part of the clones is the wear and tear of their accent colors and Bly has some of the best. His colors have all kinds of battle damage and scrapes. 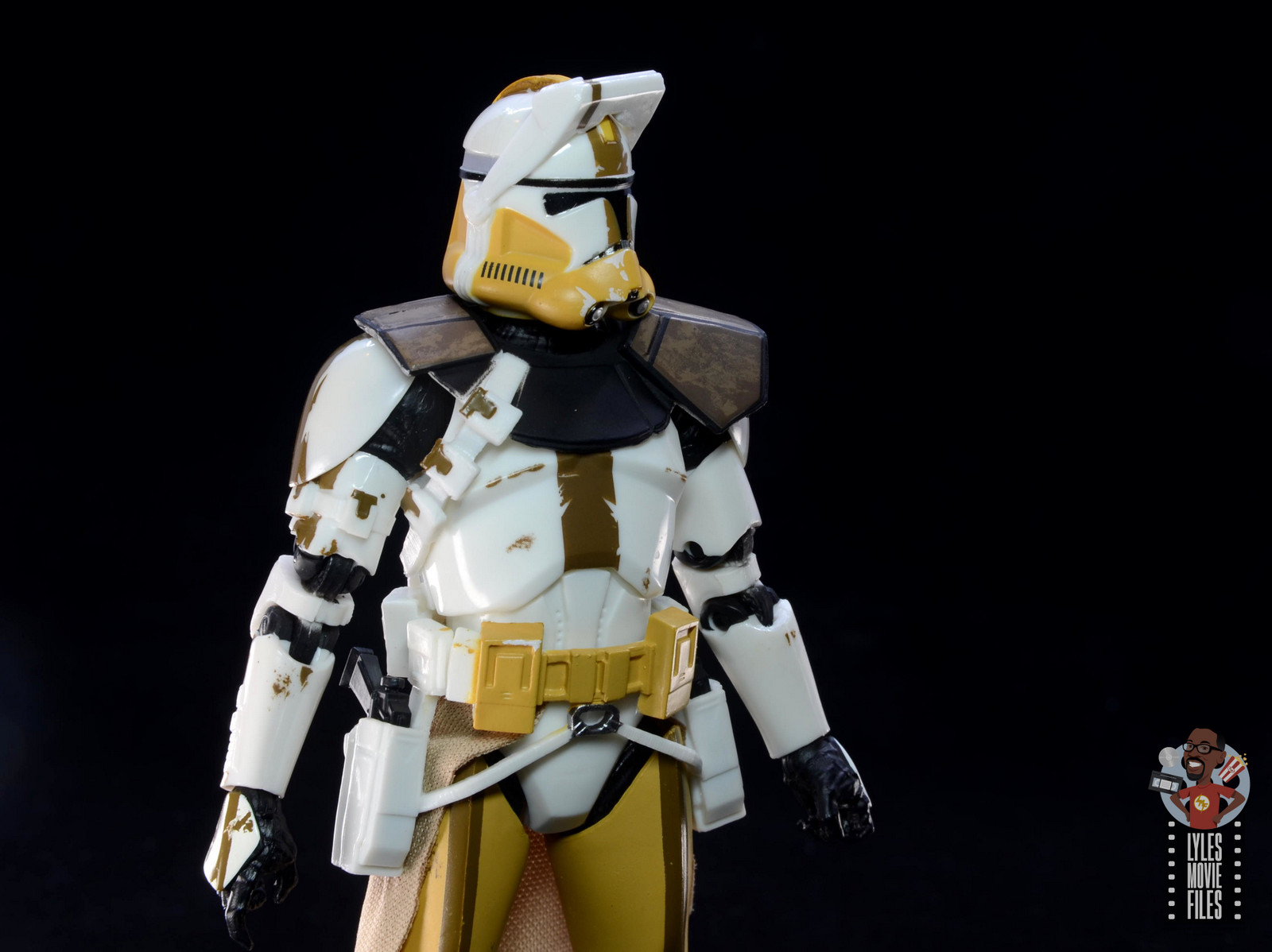 Mustard yellow is a smart, hue for the armor as it’s not too bright and stands out against the basic white armor. That’s a good combination with the gold, used as the lining accent color.

The gold on the helmet stops at the mouth vent section but should continue down to the chin. The base elements like the silver on the helmet and belt buckle are clean. 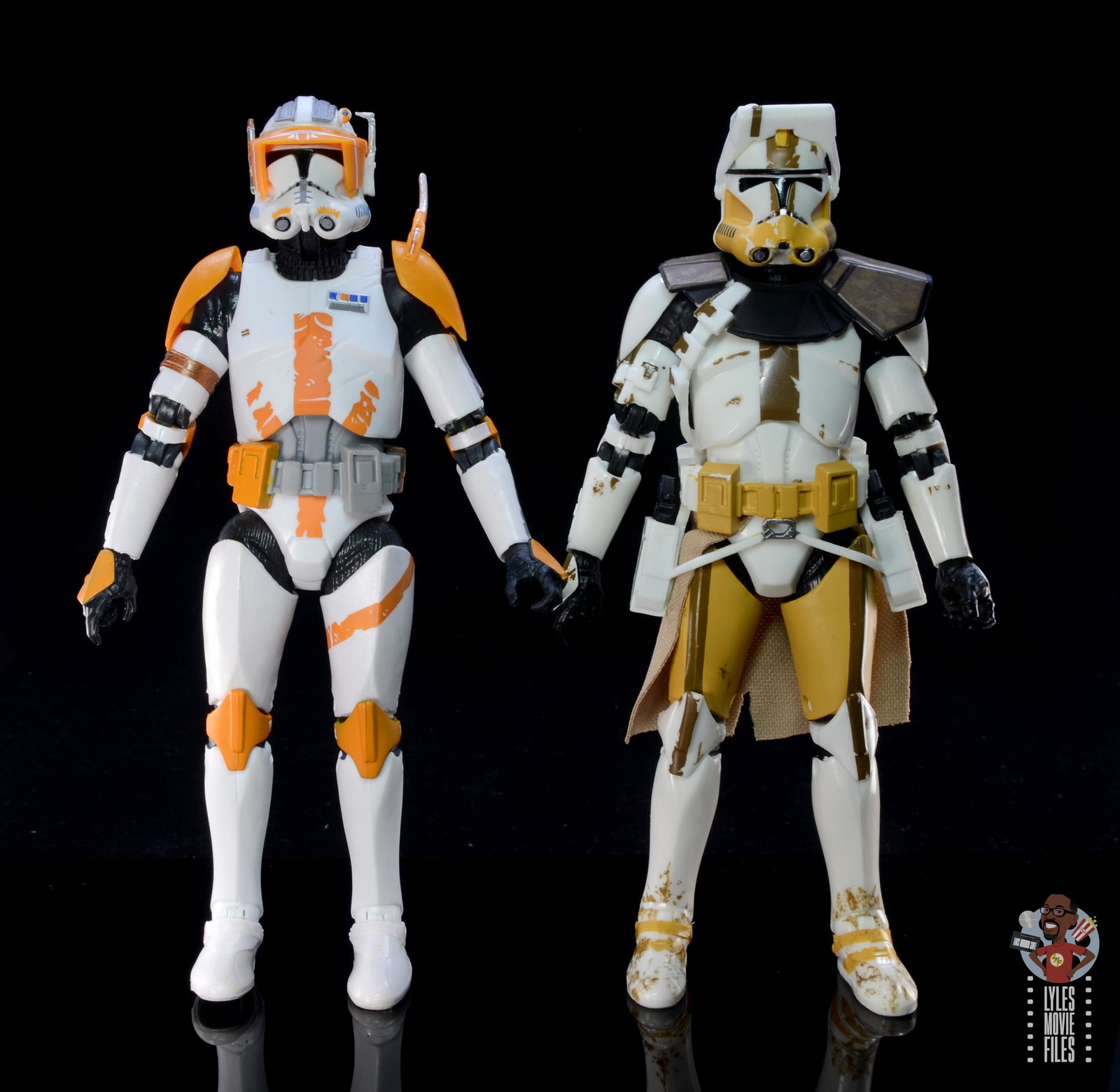 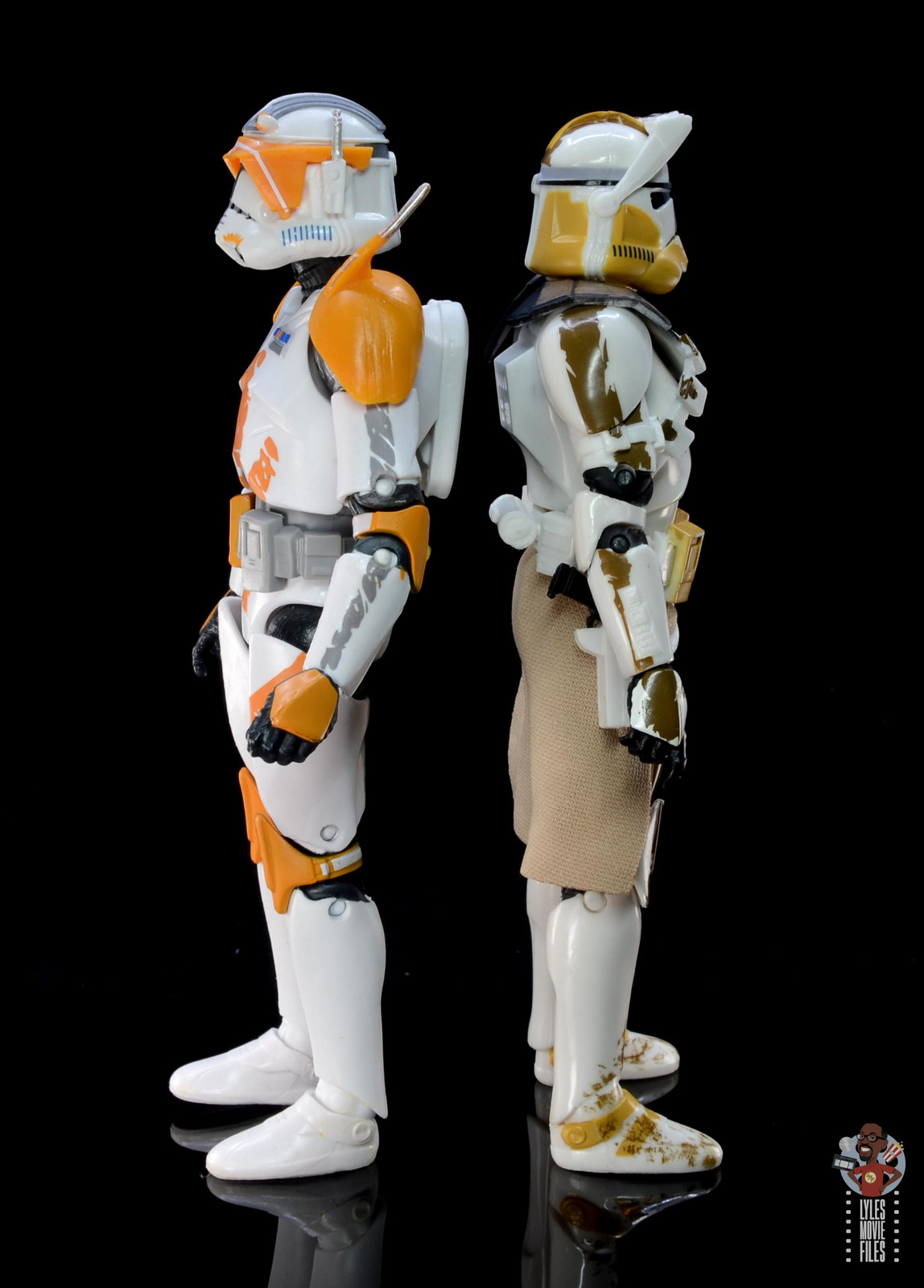 Articulation:  I got spoiled by getting the Ahsoka clones first as they set the standard for sensational Clone Trooper articulation. 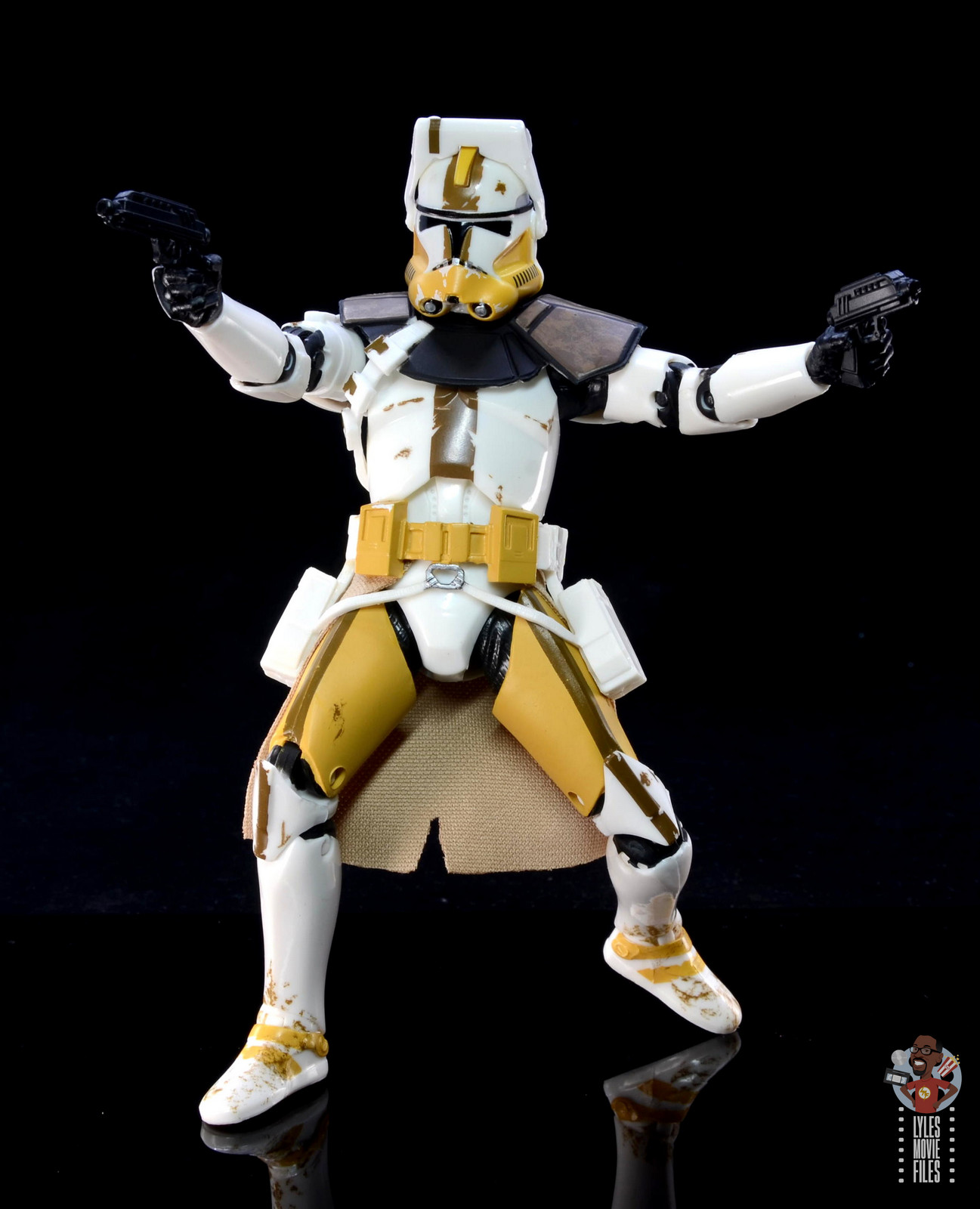 The older body is still fine, but I really miss the butterfly shoulders and wider hip joints of the modern troop body. 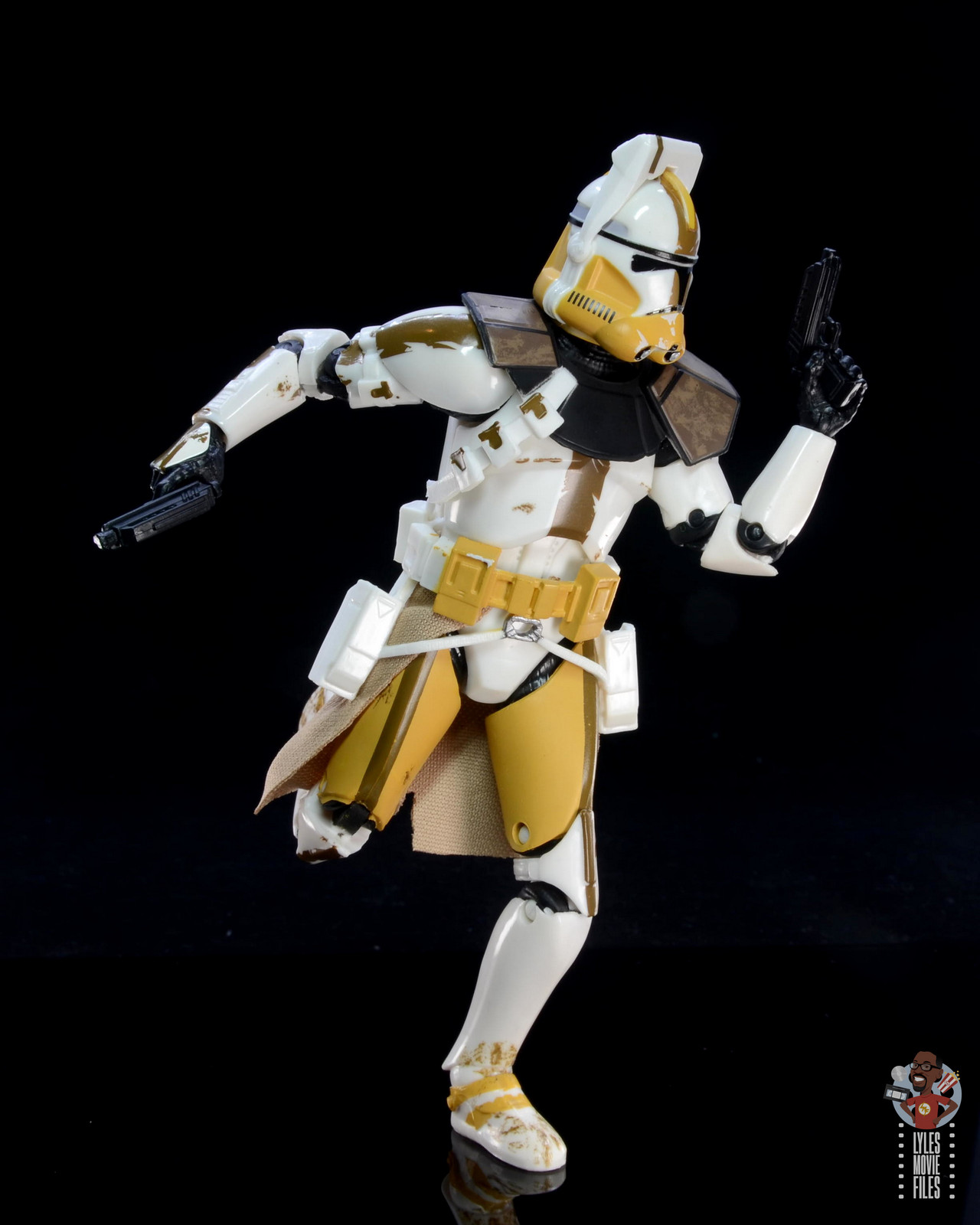 Bly’s shoulder pads hinder some of his arm movement while the holsters do the same for his thigh range. Knowing those limitations right away helps to avoid much disappointment though and he was still fun to pose. 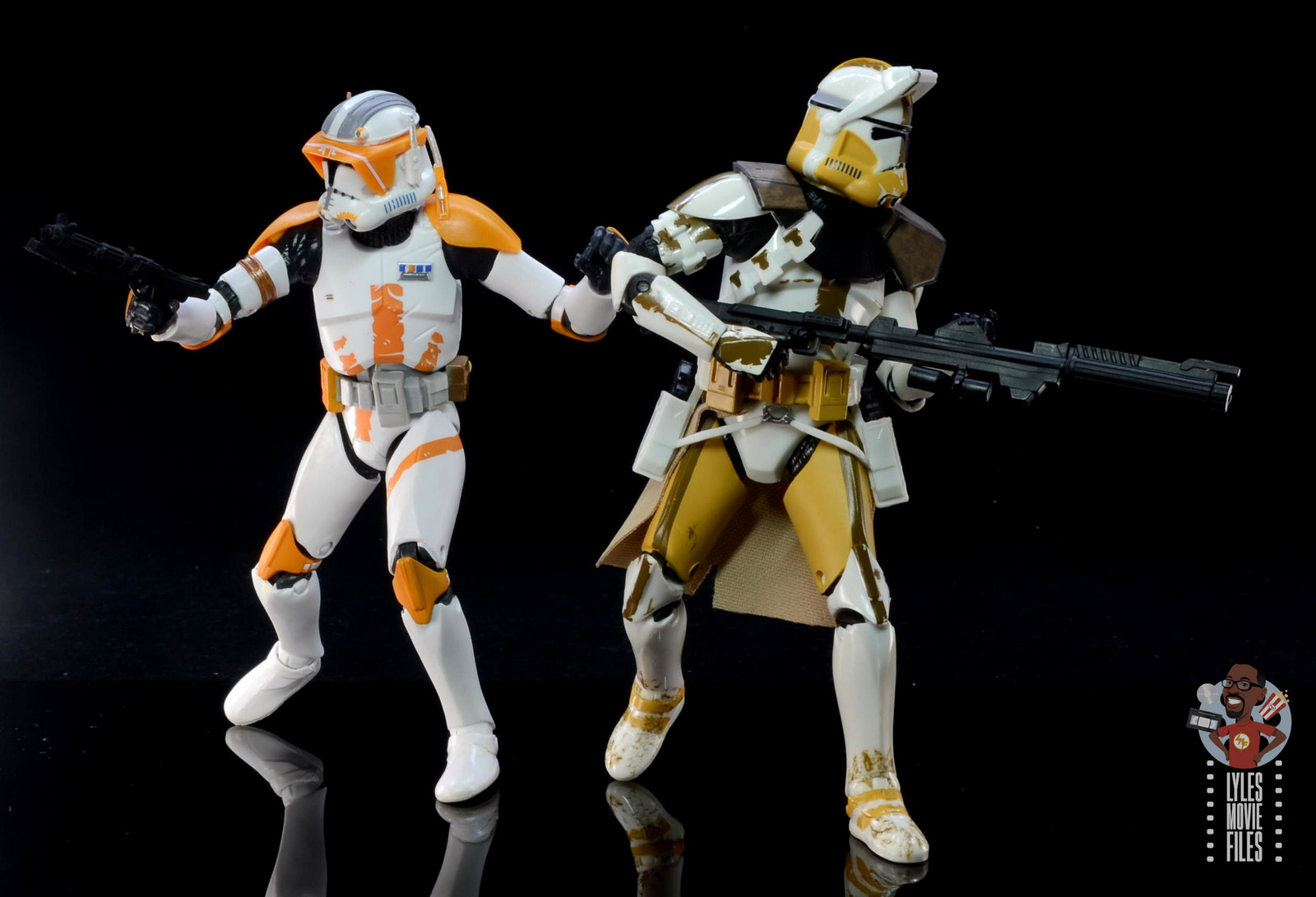 Accessories: Bly has two blasters that fit in his side holsters. 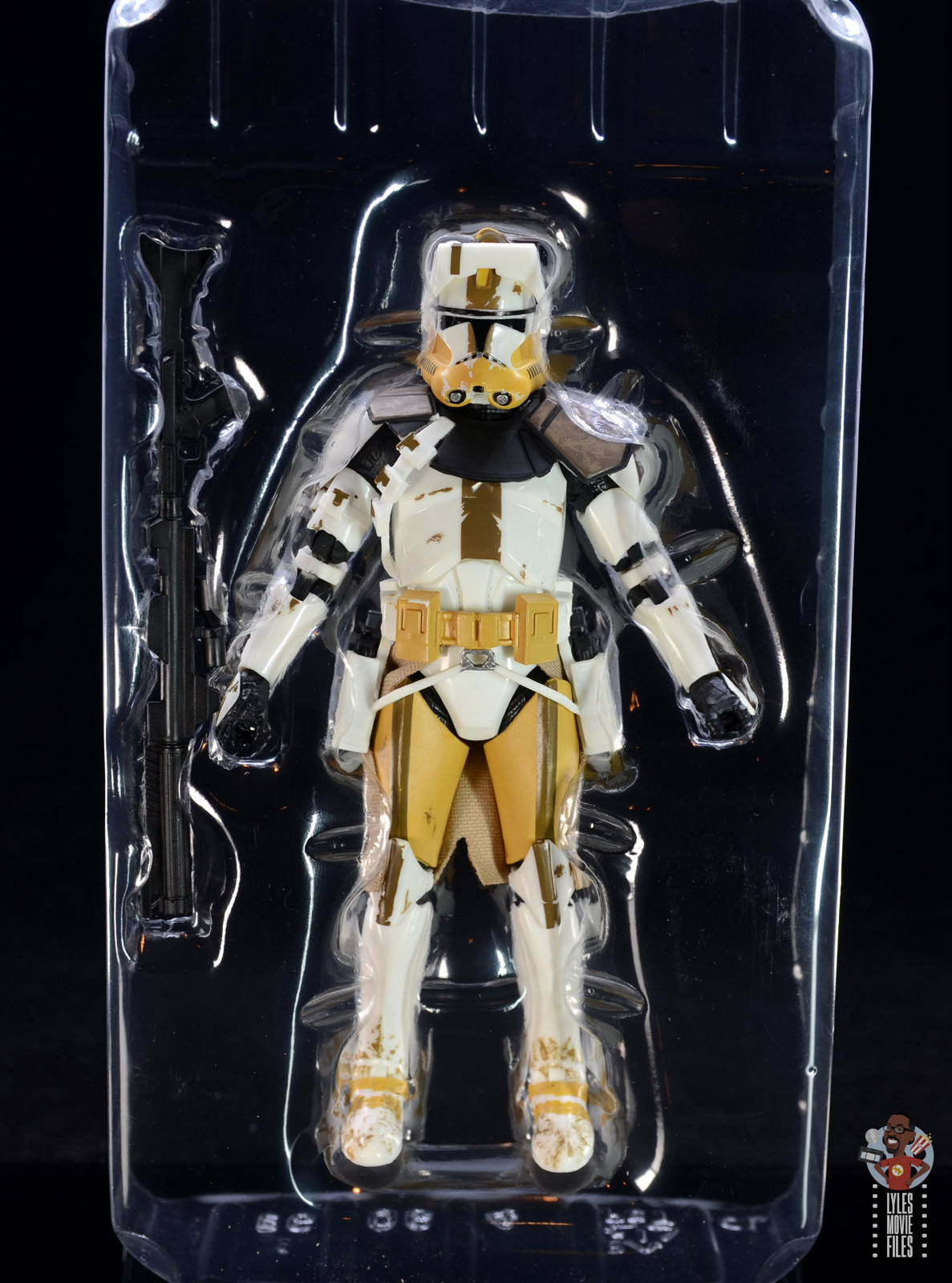 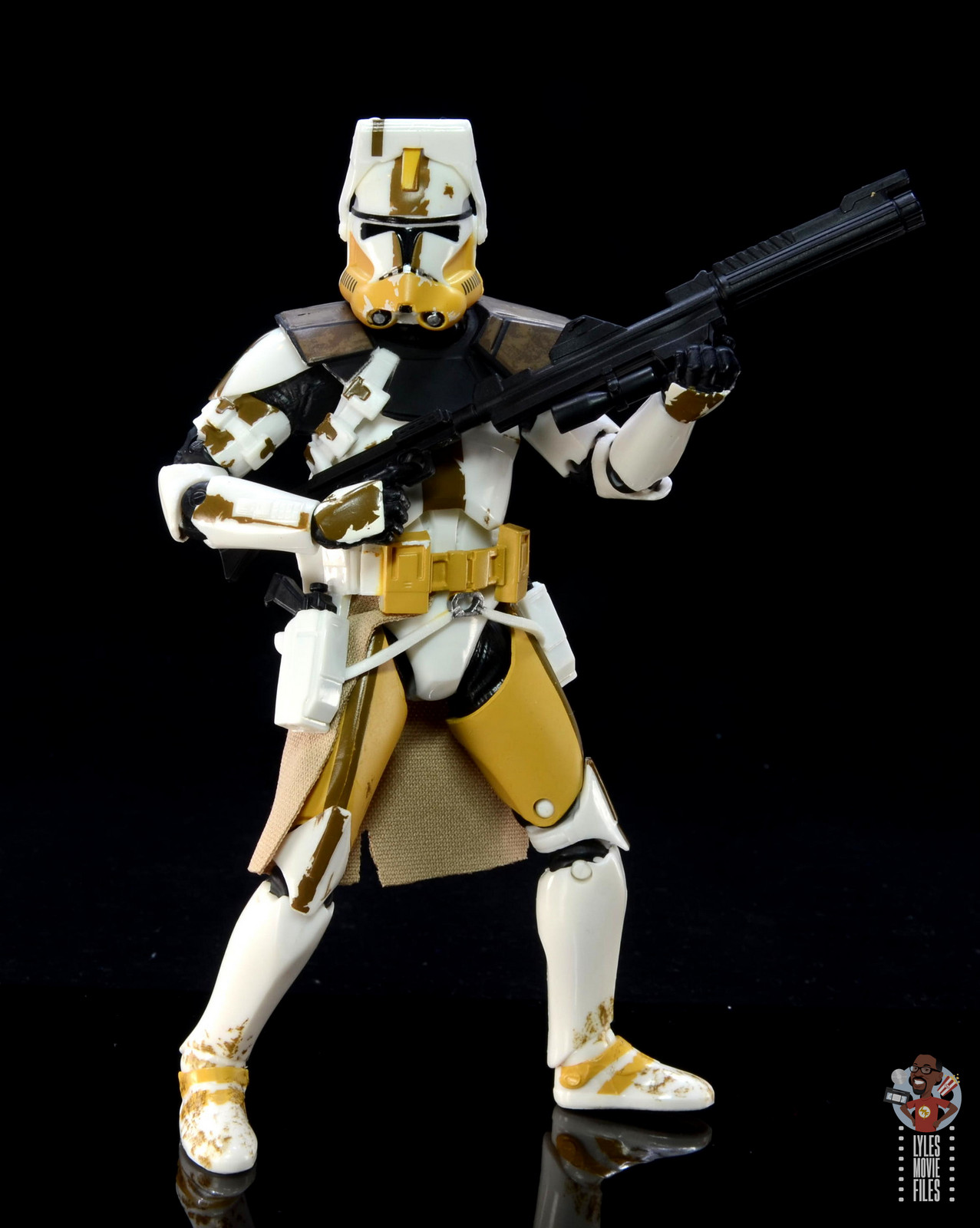 Worth it?  I got Bly for under $22.99 thanks to a special running through Entertainment Earth. Getting key Clones for under $20 is always a win. Now it’s time for the Aayla figure. 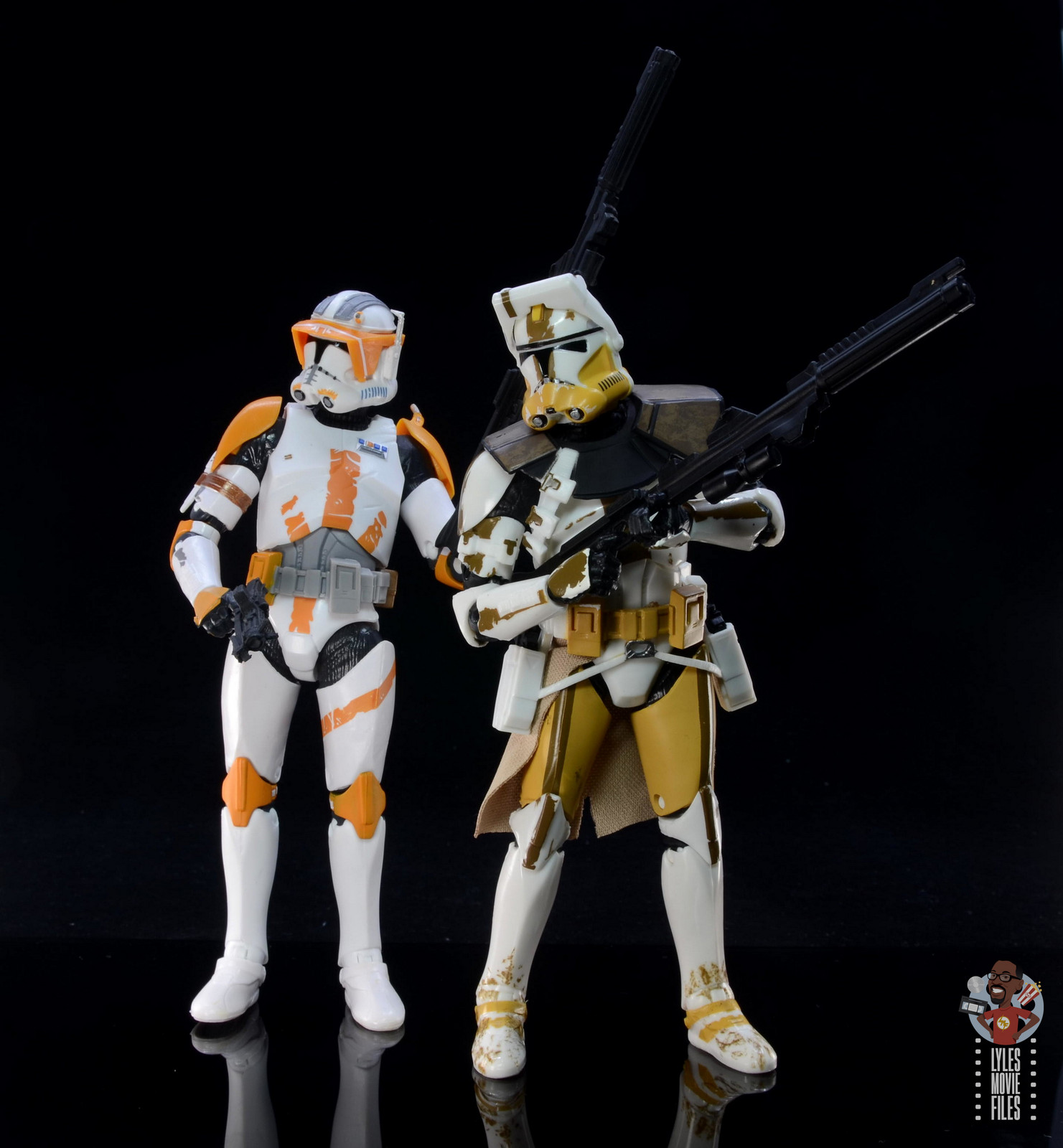 The only bad thing about this figure is the older articulation model. Otherwise, this is a very solidly constructed figure with a sharp paint job that helps flesh out the Clone Trooper legions.

Where to get it?  I don’t know when Bly was in stores. I never saw him. You can still get Bly at Amazon.