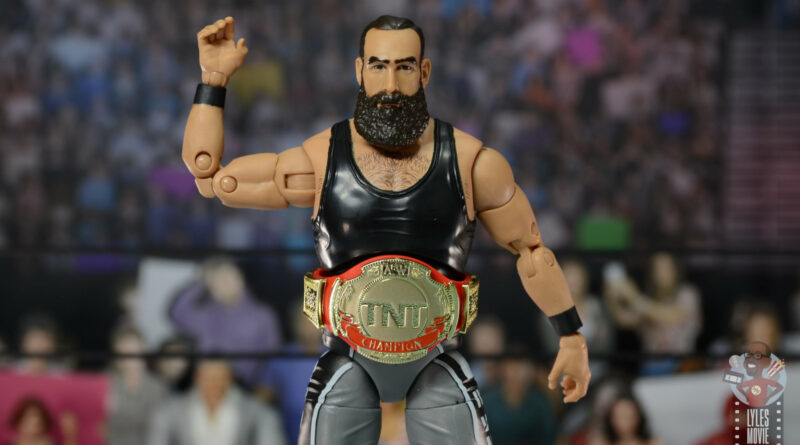 One good thing about modern wrestling is there’s not nearly the number of shocking deaths. That does mean when one unexpected one hits, it tends to resonate more. That was definitely the case with Jon Huber aka Mr. Brodie Lee.

As the Exalted One and leader of The Dark Order, Brodie Lee seemed to finally be in the kind of spotlight his talents deserved. I was thrilled when Jazwares revealed they were making a Brodie figure. Part of the fun in collecting wrestling figures in particular is honoring the stars and personalities that are no longer with us and remembering them in their best on camera light.

And it was also very cool to see Brodie be the centerpiece of the all Dark Order wave of Unmatched Series 3. Grab your roll of papers and let’s see if this figure is worthy of the Exalted One.

Packaging:  There’s still nothing different from the Unmatched and Unrivaled lines save silver foil accent instead of gold. It does help to break the two lines up so you know when a new wave has hit the pegs.

Packaging remains the biggest weakness for the line. It feels in too many ways like an afterthought with the tiny portrait on the side making it hard to see which figure you’re seeing on elevated pegs. The back lacks any kind of personalization with no stats or bio, which really feels like a lost opportunity with Brodie.

There is a new feature here with the addition of a tab for three exclusive Upper Deck trading cards.

Likeness:  With the exception of The Revival/FTR, most of the Mattel/Jazwares figures of the same guy has favored Jazwares. They’ve been killing the head sculpts and generally being willing to create new sculpted pieces for figures as needed instead of just making do with what’s available. 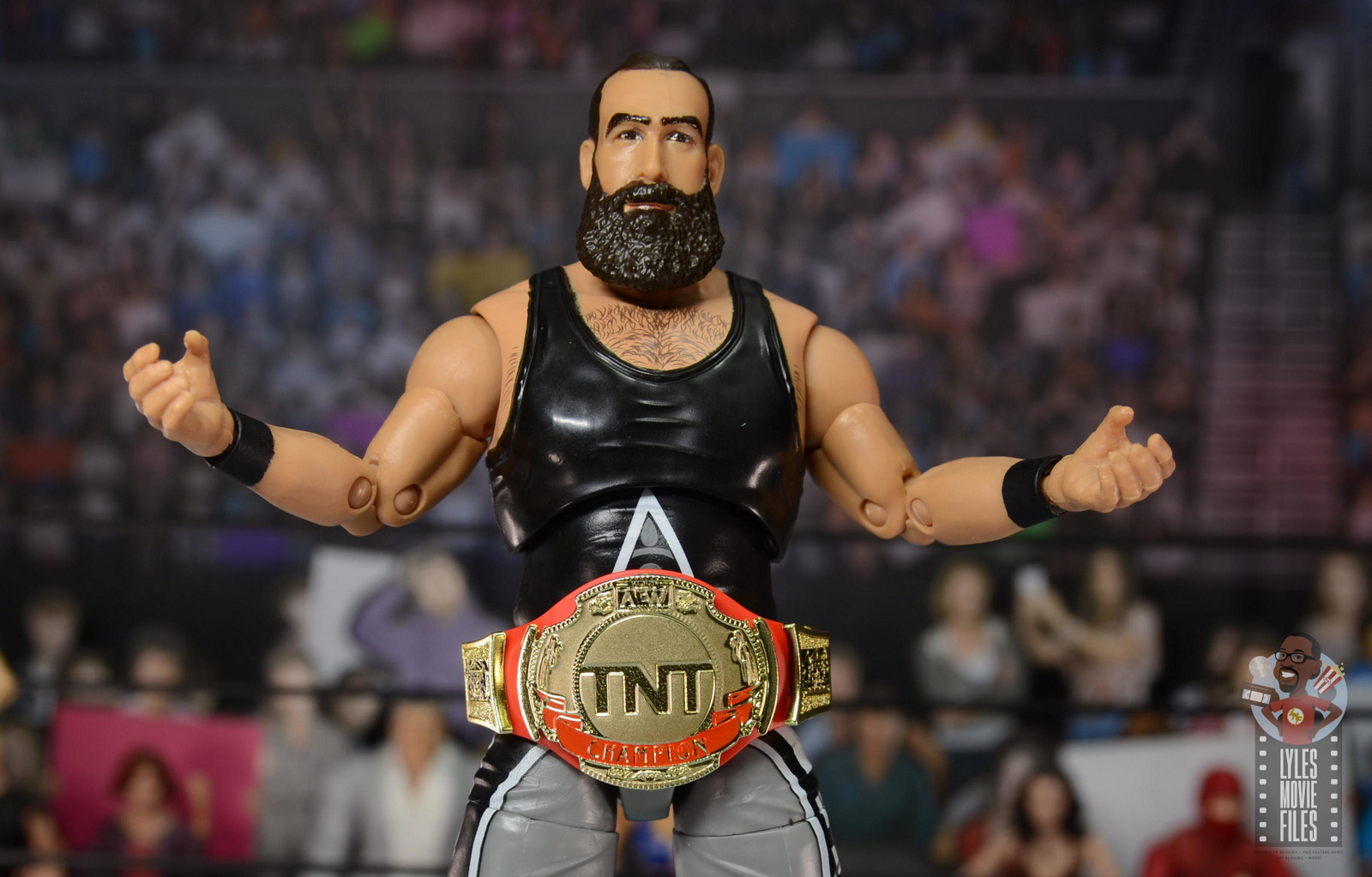 Brodie’s head sculpt is amazing. It totally conveys that simmering intensity he had berating The Dark Order. The beard is thick and nicely detailed although I kinda wish his mustache was elevated oh so slightly for the mustache tug taunt. 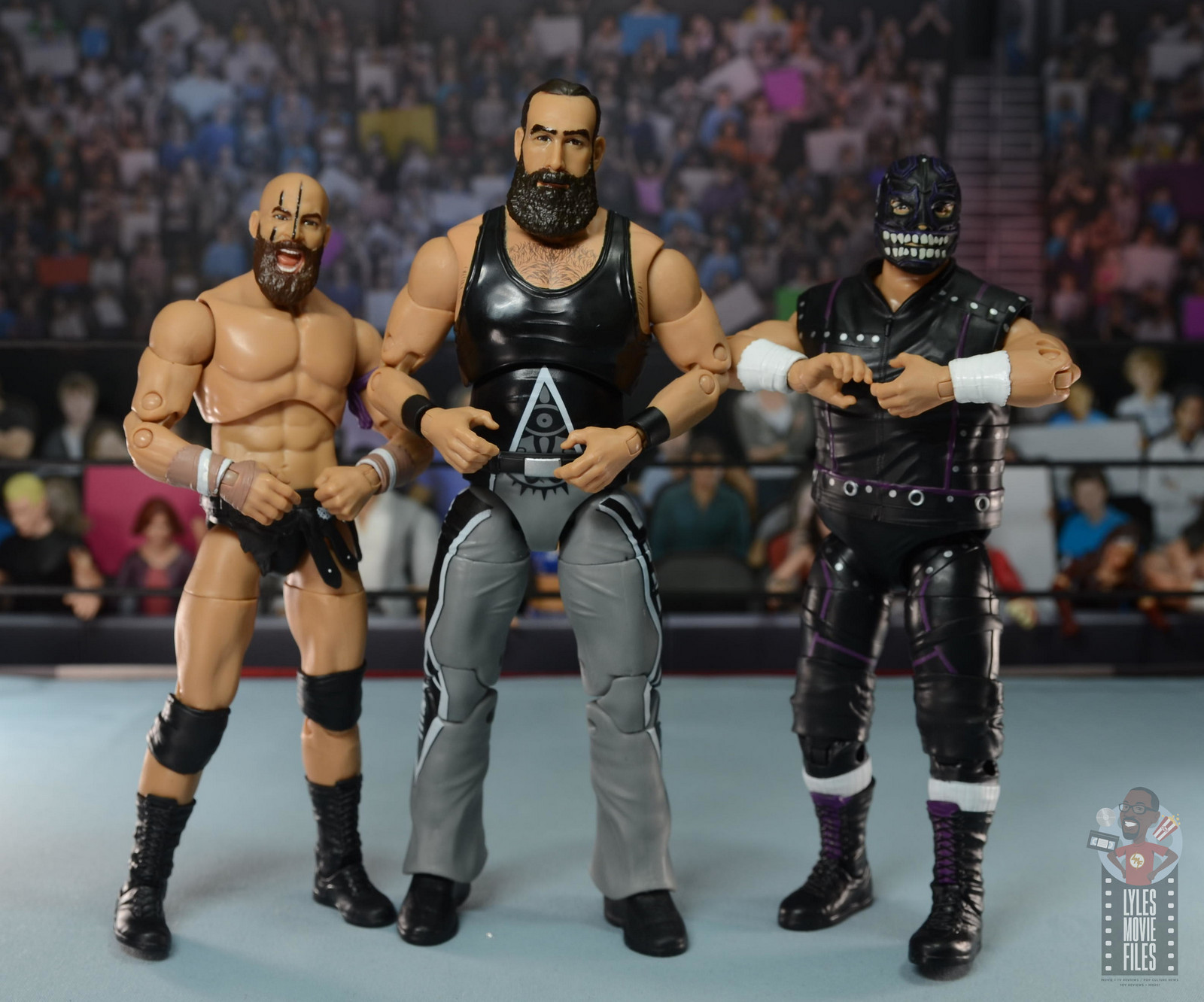 Jazwares gave him a broader body befitting his beefy frame. He had a simple outfit, but it looks good here in figure form. 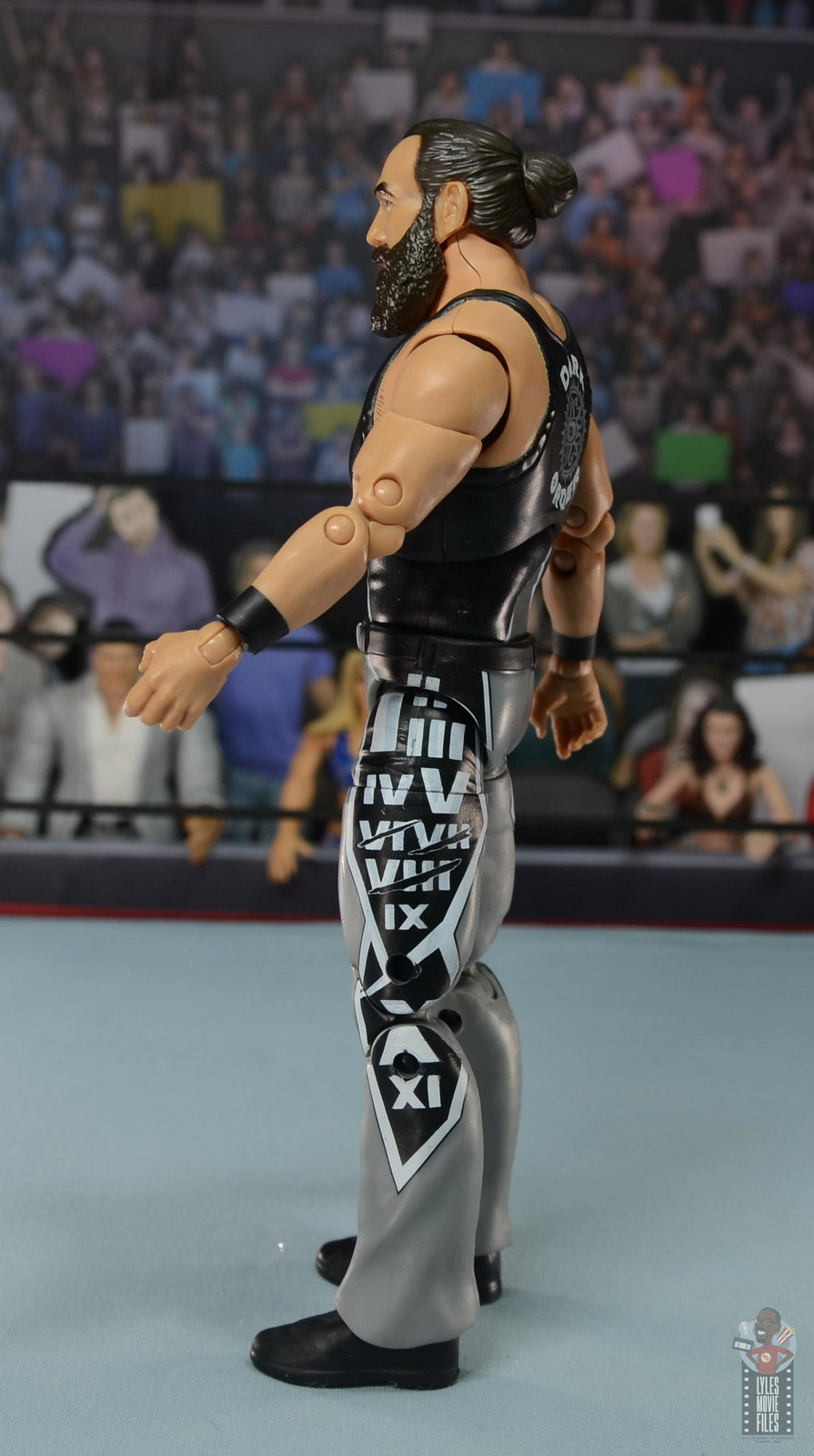 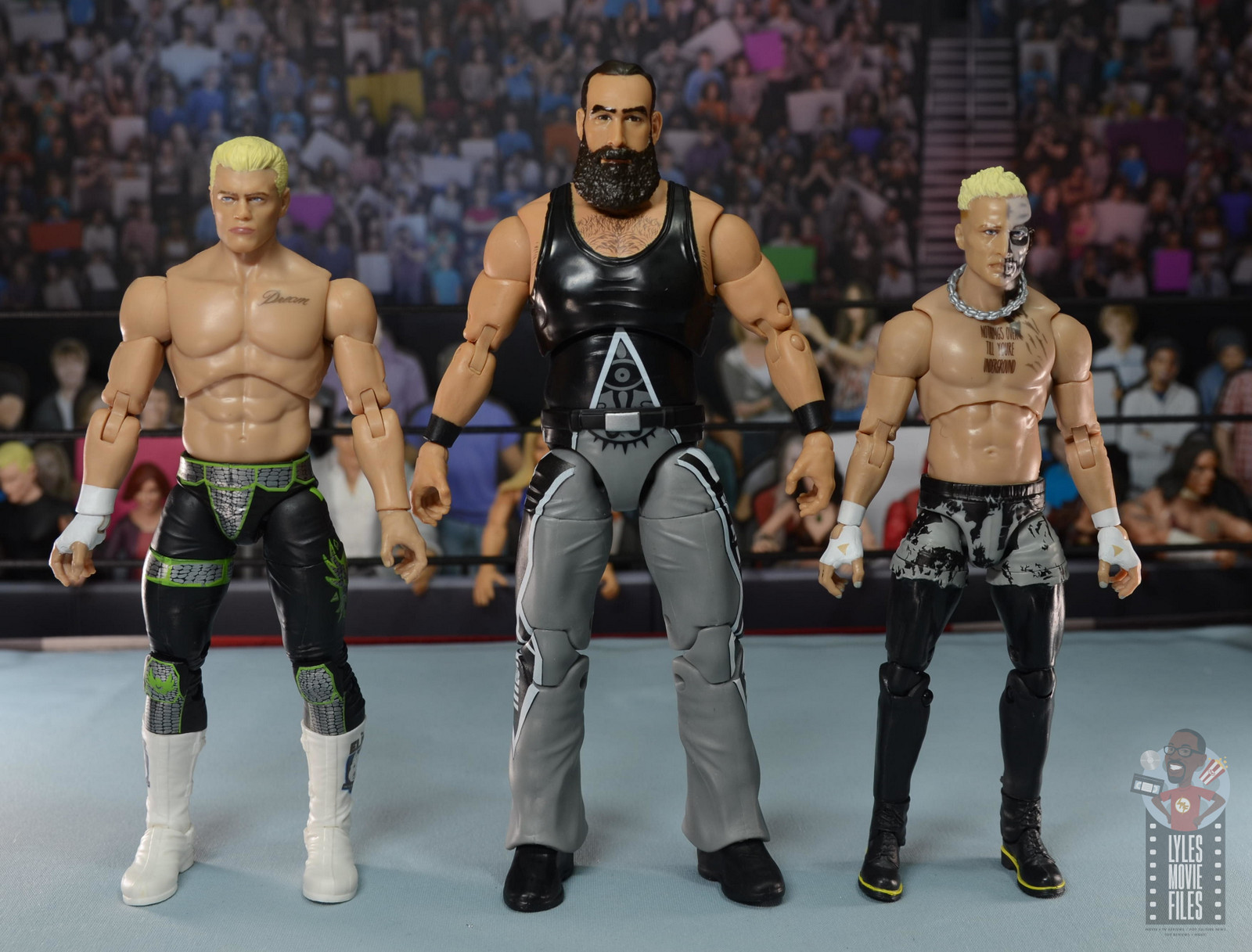 As usual the AEW figures are mostly pretty well scaled to each other besides that goofily gigantic Jon Moxley. 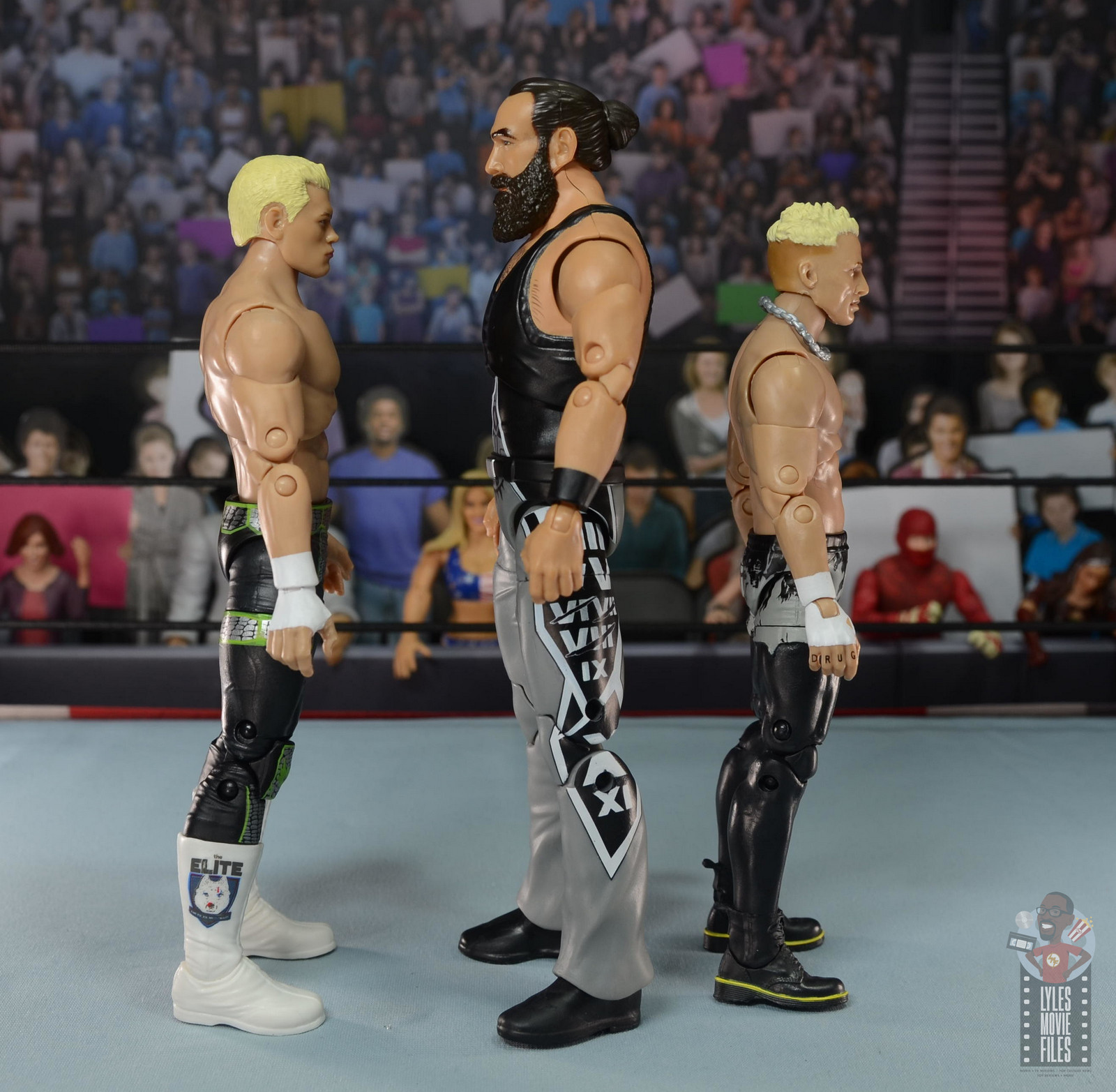 Paint:  Brodie continues the stellar paintjobs of this wave. I like how Jazwares did Brodie’s chest hair even extending it beyond the other side of his top.

The white stripes of his pants would benefit from another application hit, but only to make it pop more than a case of the darker colors bleeding through.

Brodie also has a chase in this series with a predominantly black outfit. It makes him look more in line with the rest of The Dark Order for those who prefer a more uniform look. 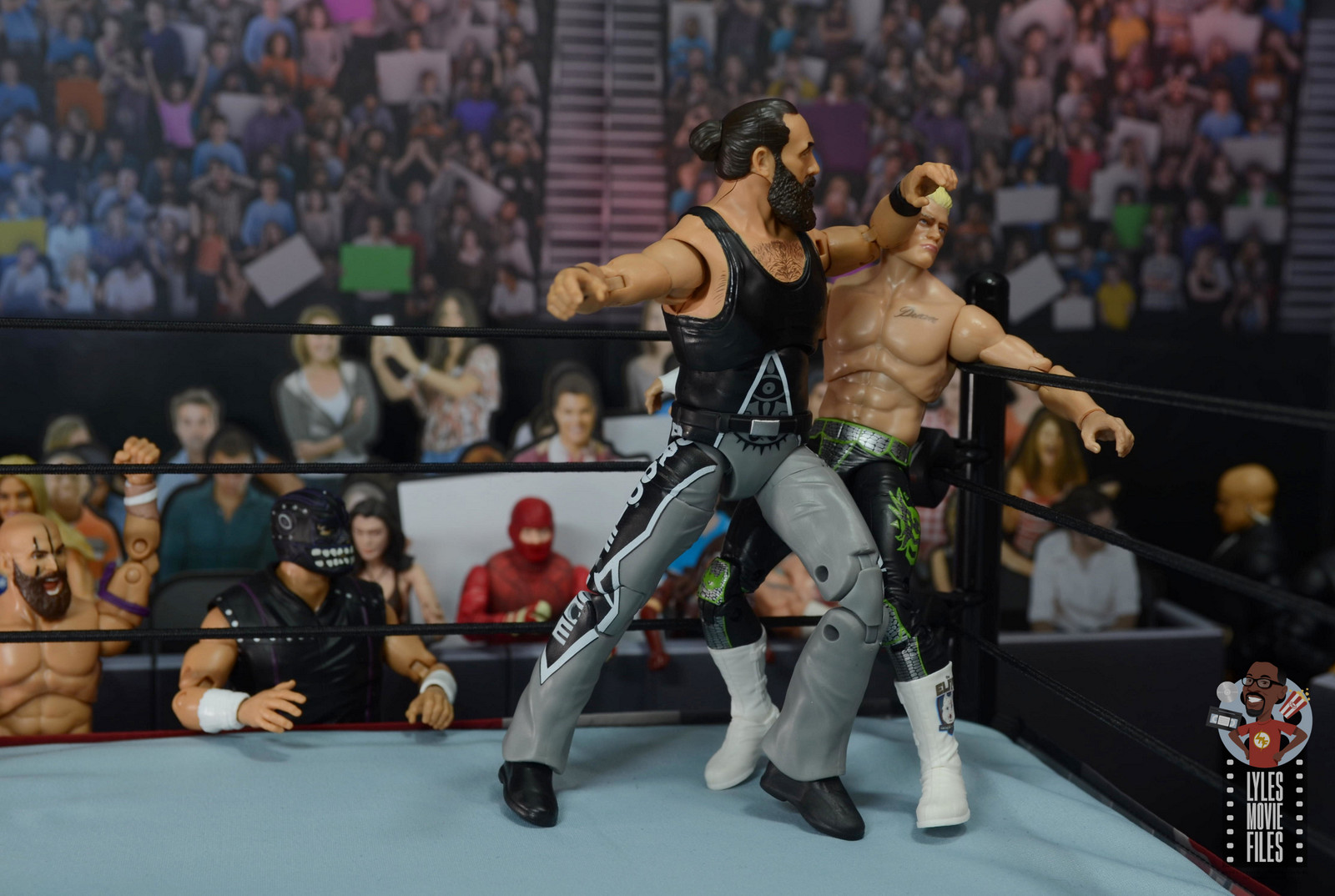 Articulation:  Brodie was a mauling brawler who wiped out opponents with high impact moves. 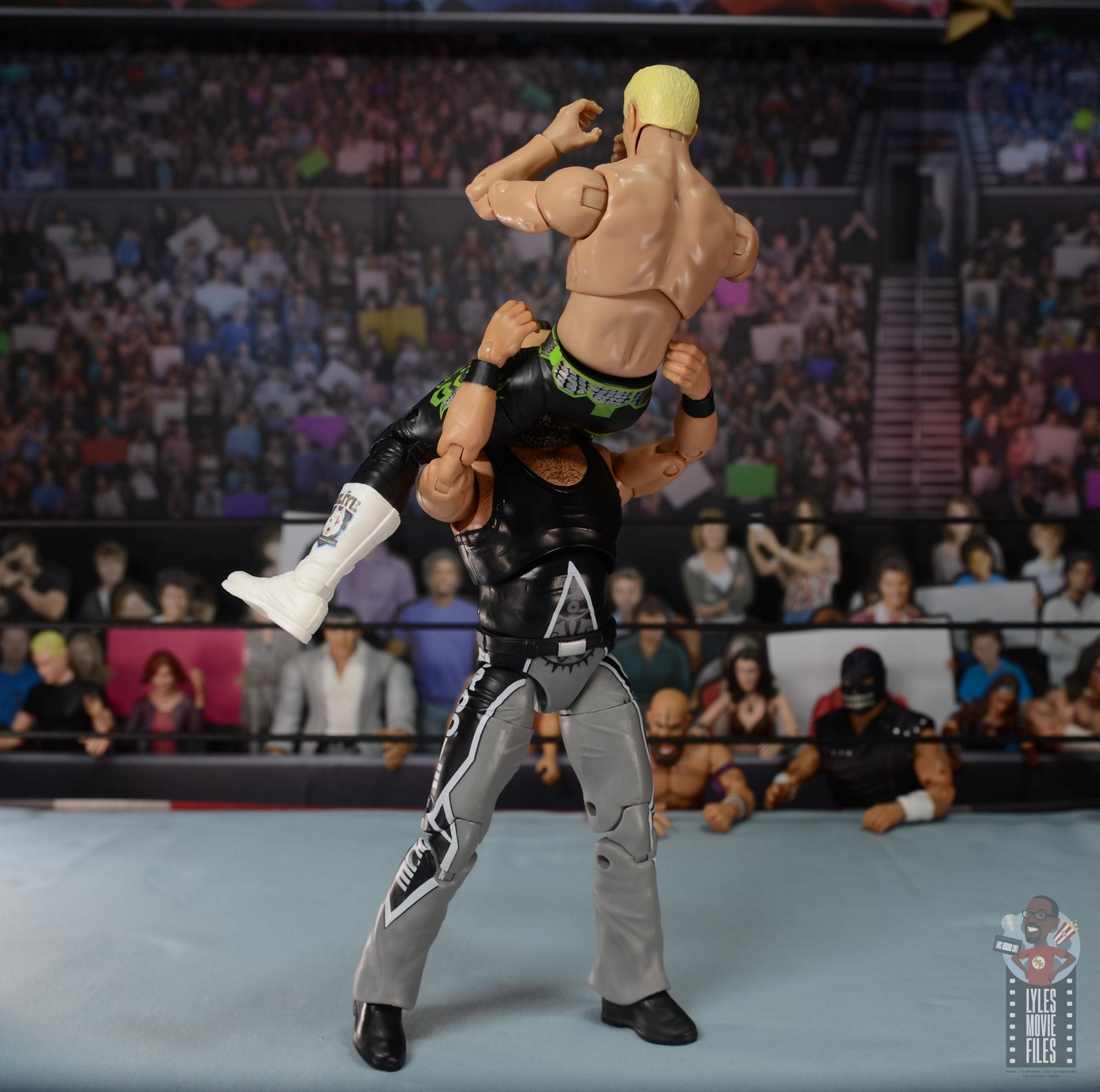 His lariats and big strikes are no problem. I didn’t have any problem doing Brodie’s big boot with his signature delivery. 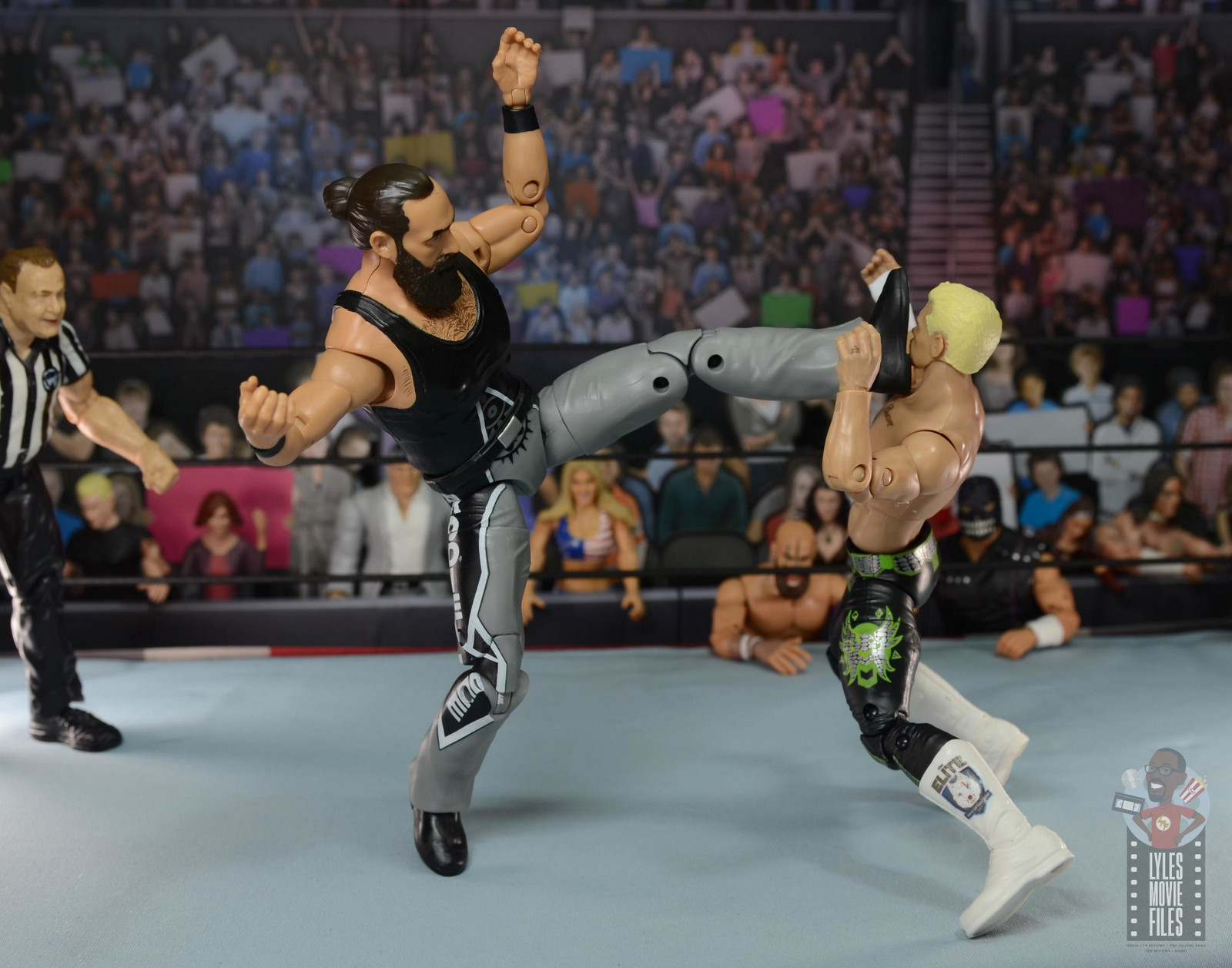 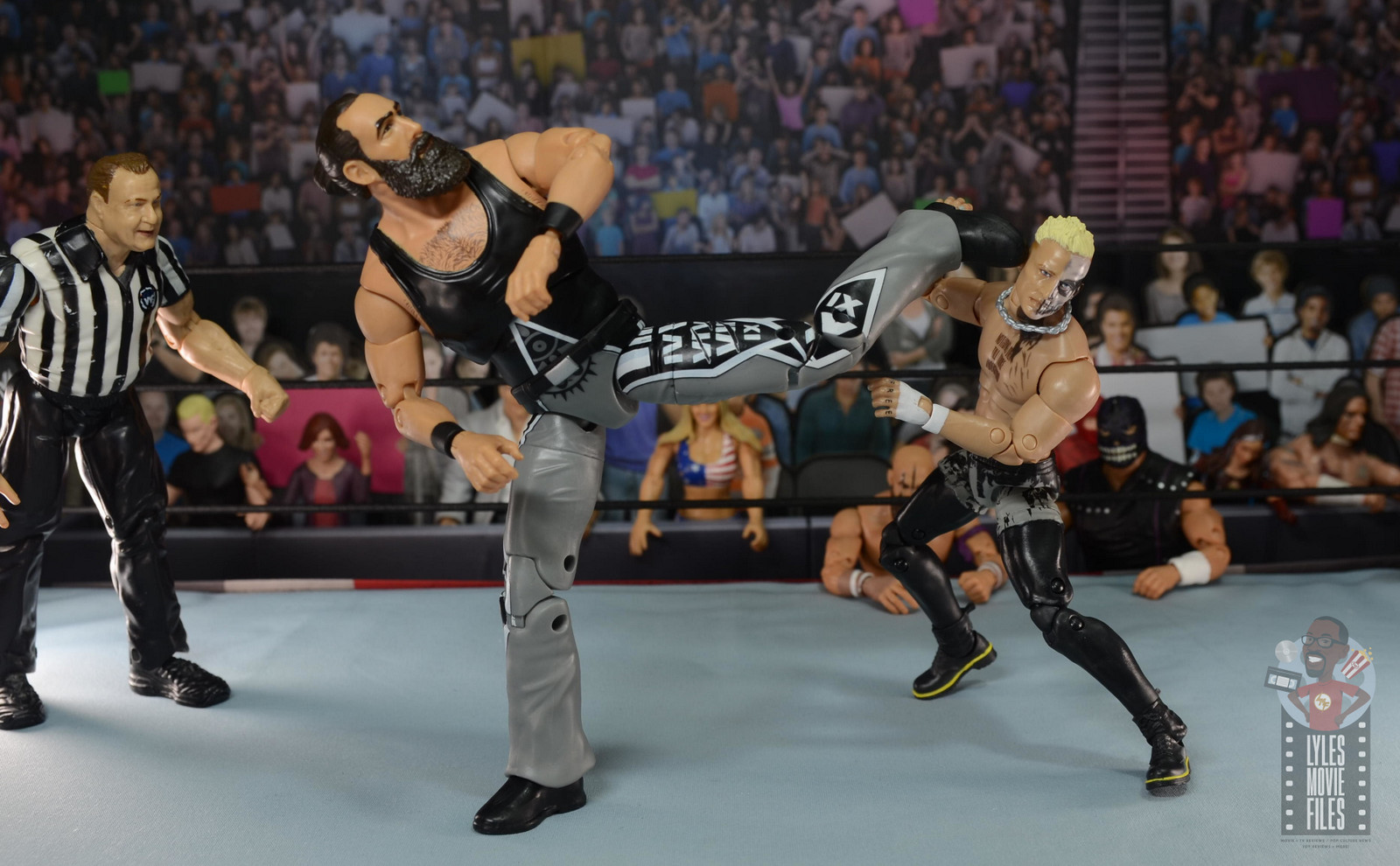 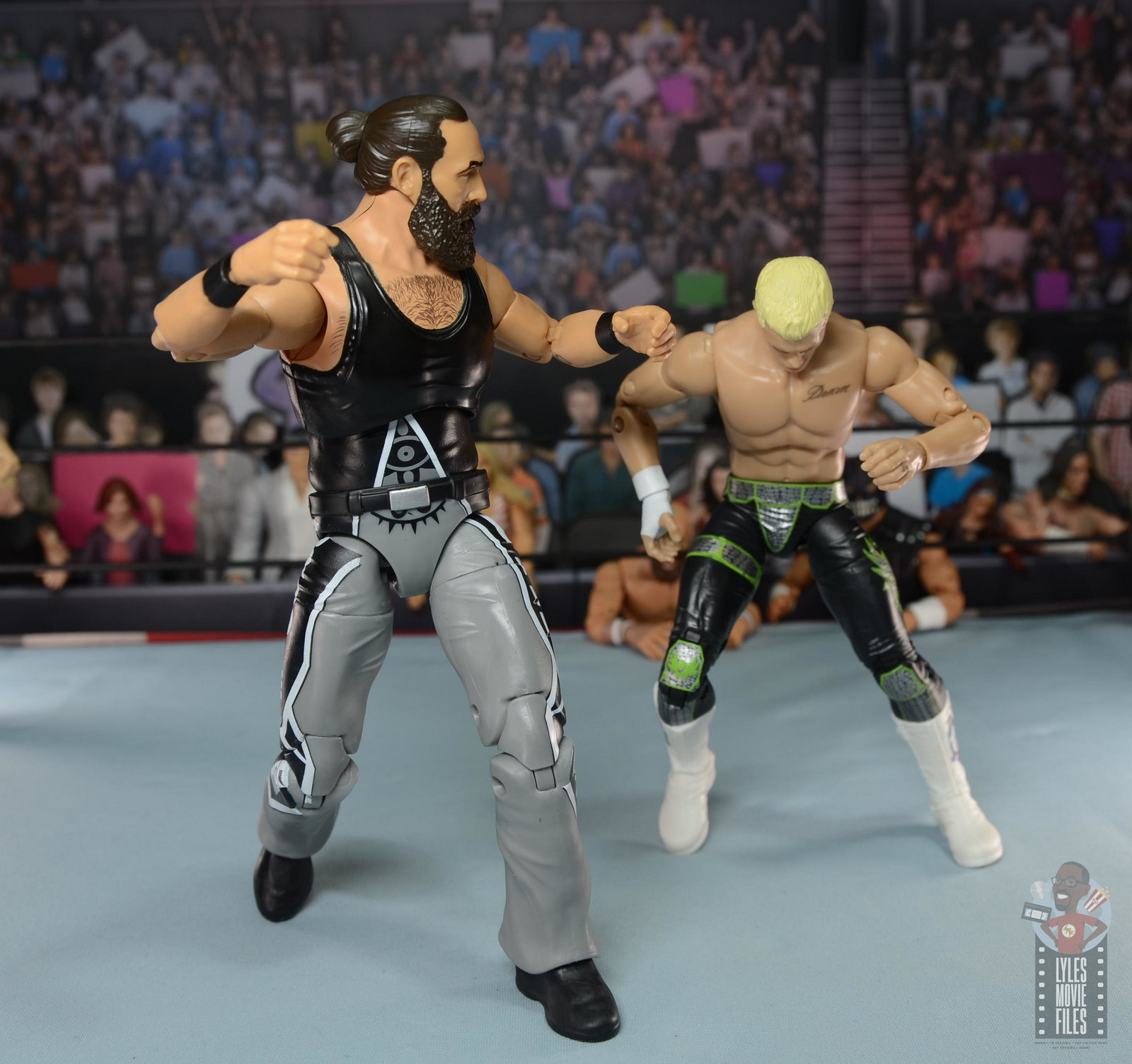 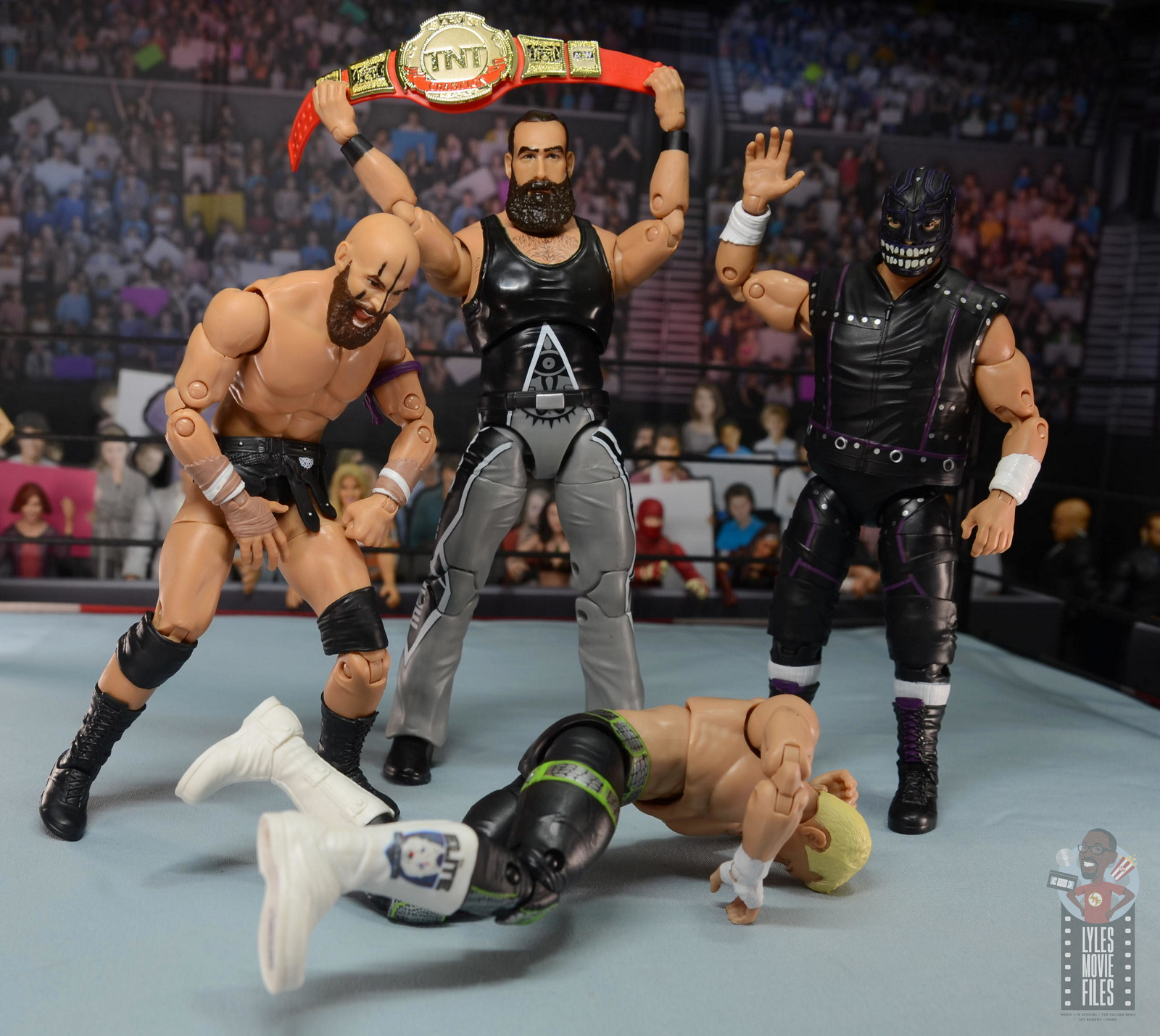 Accessories:  Unlike the other figures in this wave, Brodie doesn’t have a ton of accessories. 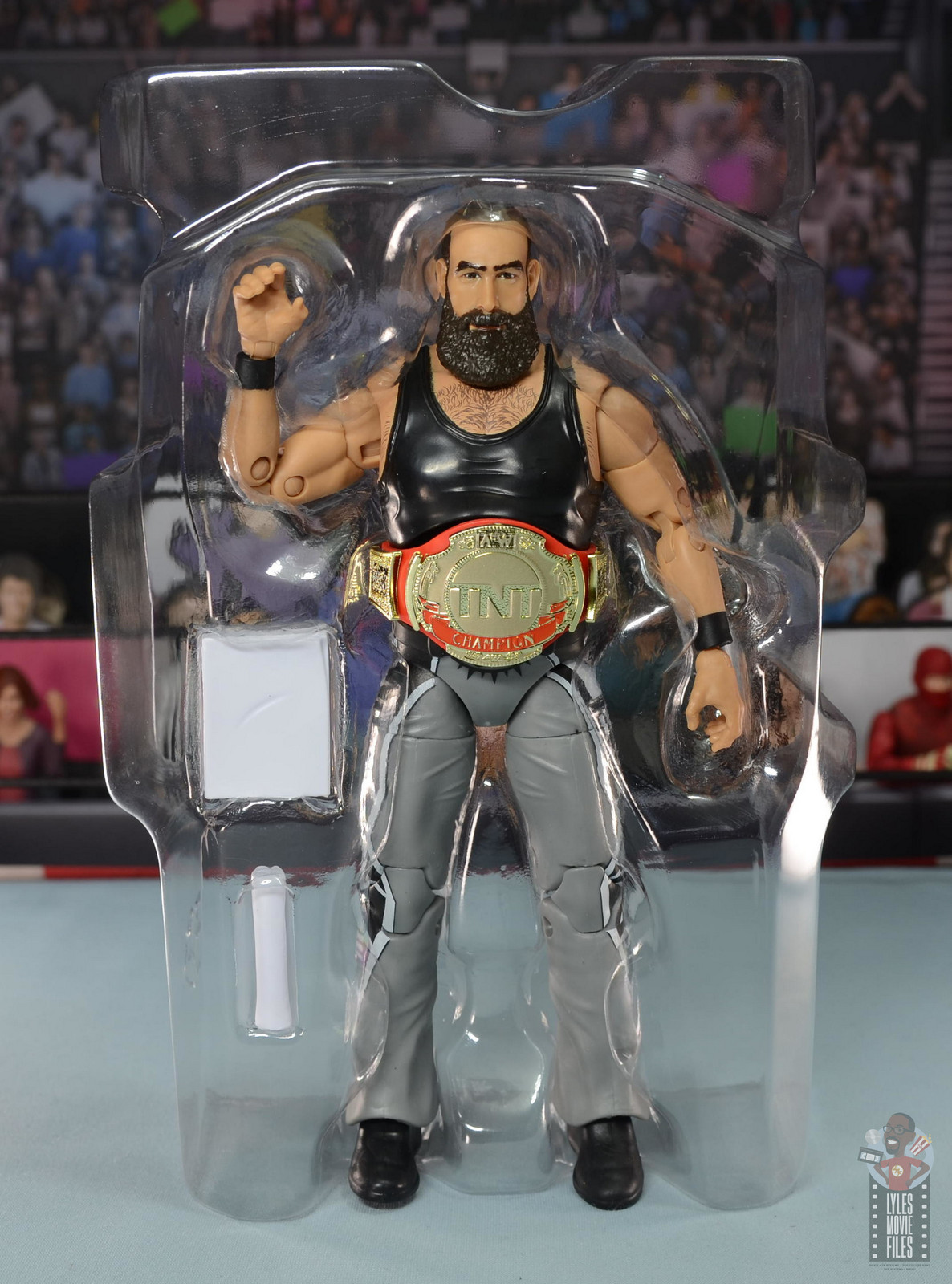 I would have loved if Jazwares added Brodie’s super swank robe. He does have some fun additions. One is his big stack of papers and a roll of paper he would use to beat down John Silver in particular. 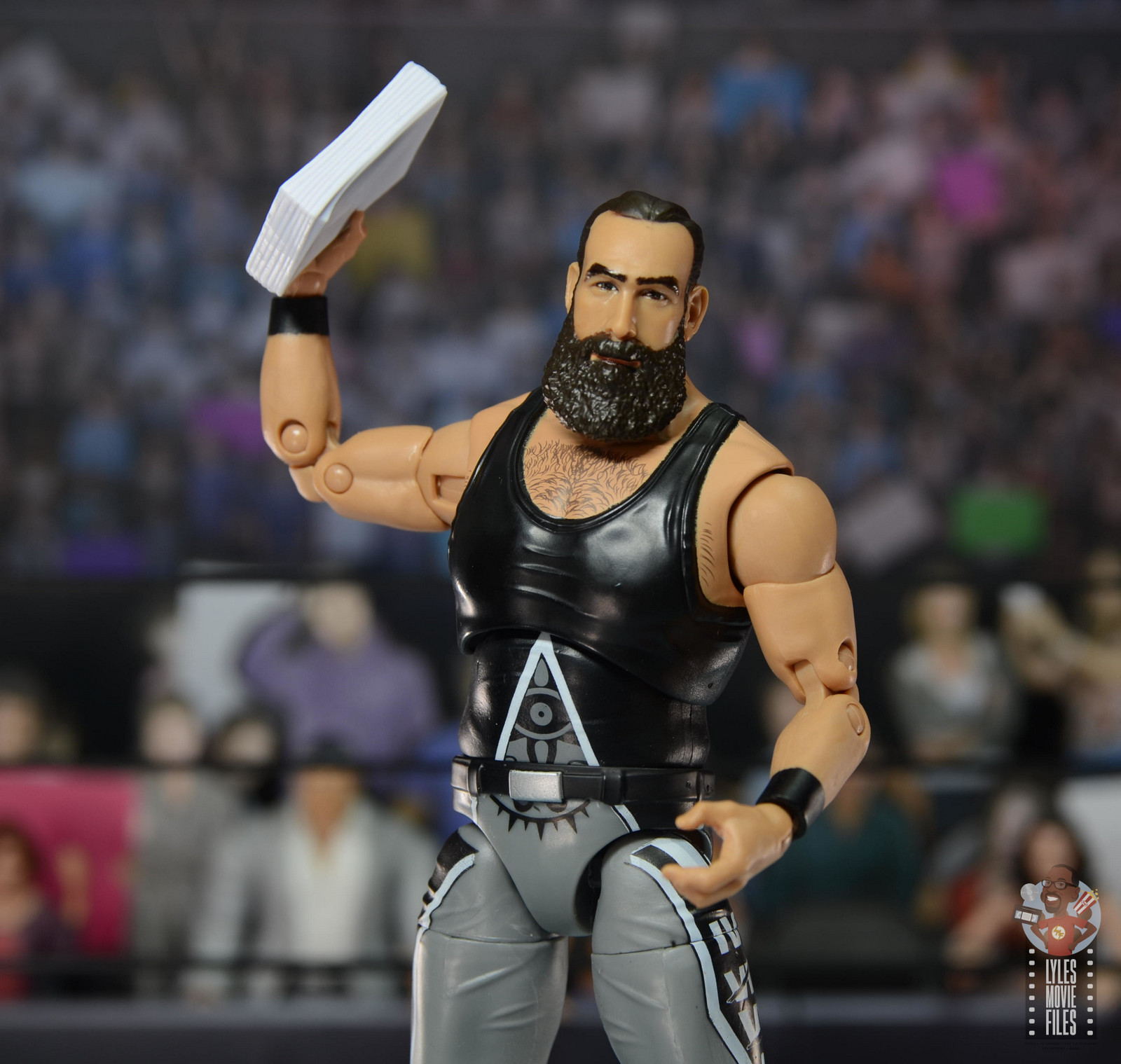 He also comes with the TNT title. Since I’ve missed the previous figures that had this, I was happy to finally get it. Overall, it’s a nice-looking title with a quality metallic gold for the plates over the bold red strap. 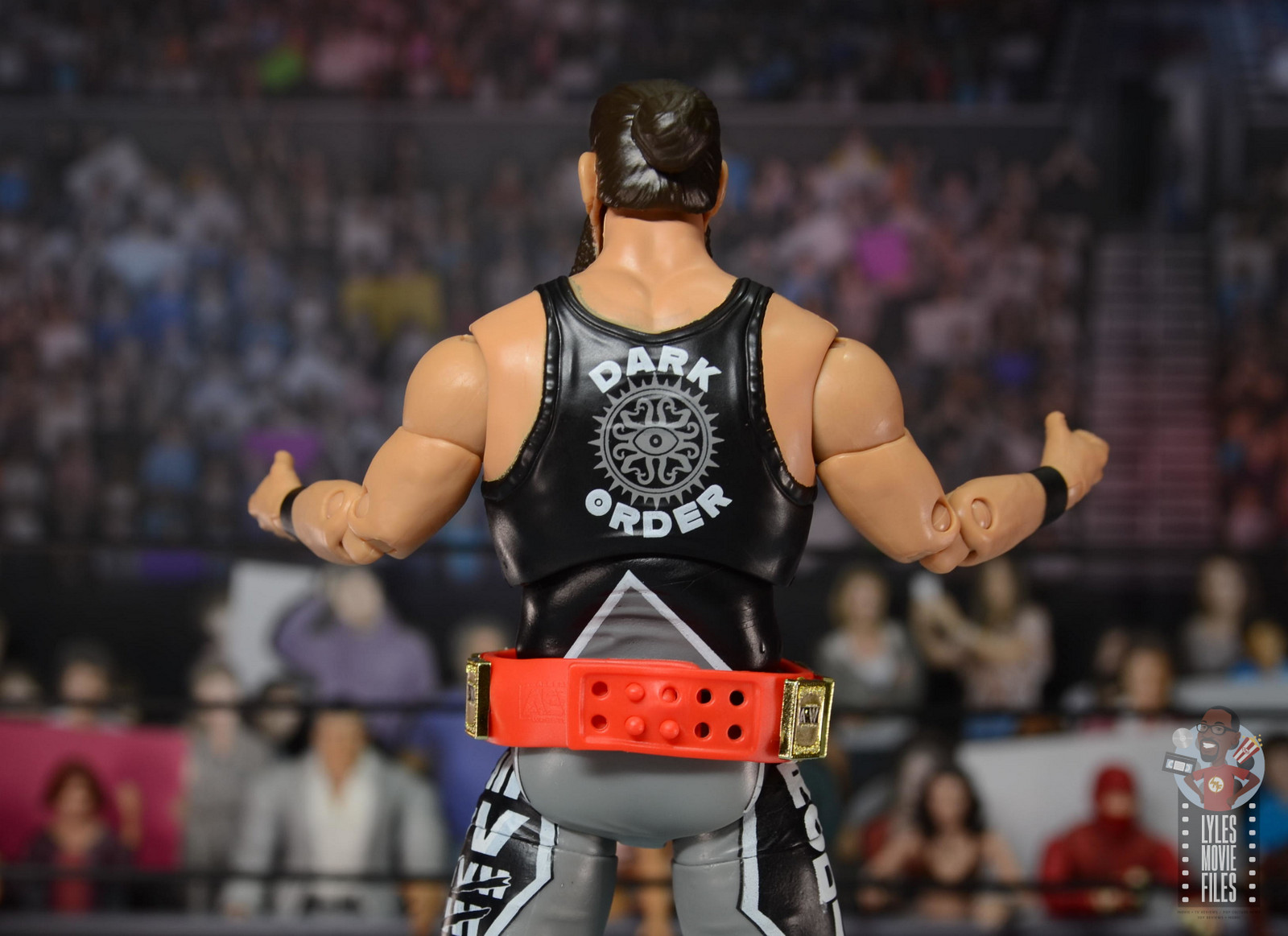 The paintwork could be tighter as Champion is overrun with red slop and AEW has more of a messy wash than any kind of precision. The lettering is small so it’s probably unavoidable.

And if you’re so inclined, the trading cards are other accessories. 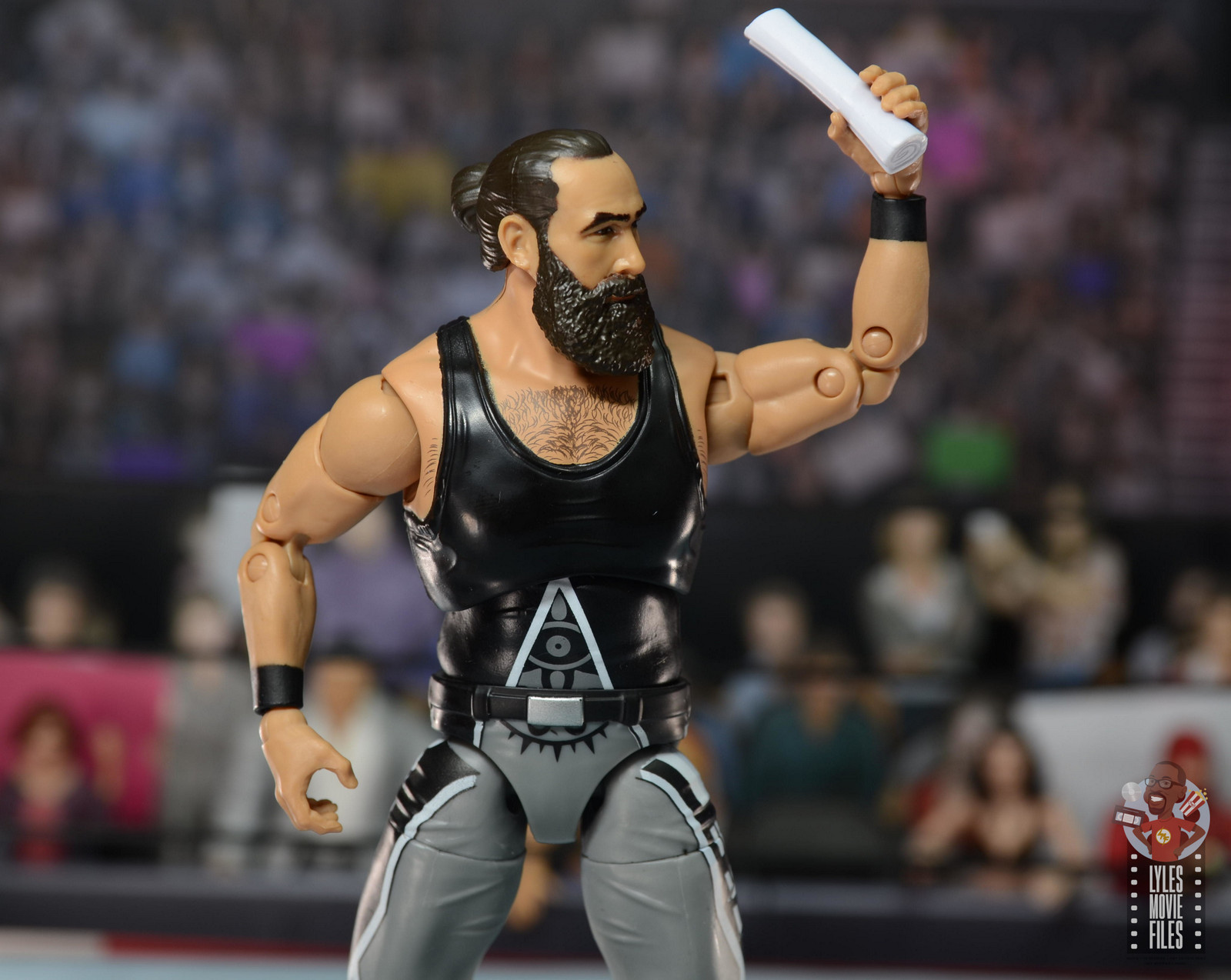 Worth it?  The Unmatched line, like every other figure line, has seen a price increase. Now the figures are $21.99, which is close to making me consider if I need to get a mostly complete AEW roster.

What I’ll likely do, especially since they aren’t the gold bricks that only showed up on pegs once and that was it, is just wait out for Target sales. They had one the week I found Unmatched Series 3 making it a lot easier to grab four at once.

Sentiment might be affecting this review slightly, but beyond the lack of the robe, this is a pretty stellar take on Mr. Brodie Lee. Jazwares looks to be invested in honoring his memory and this figure was a great first step. 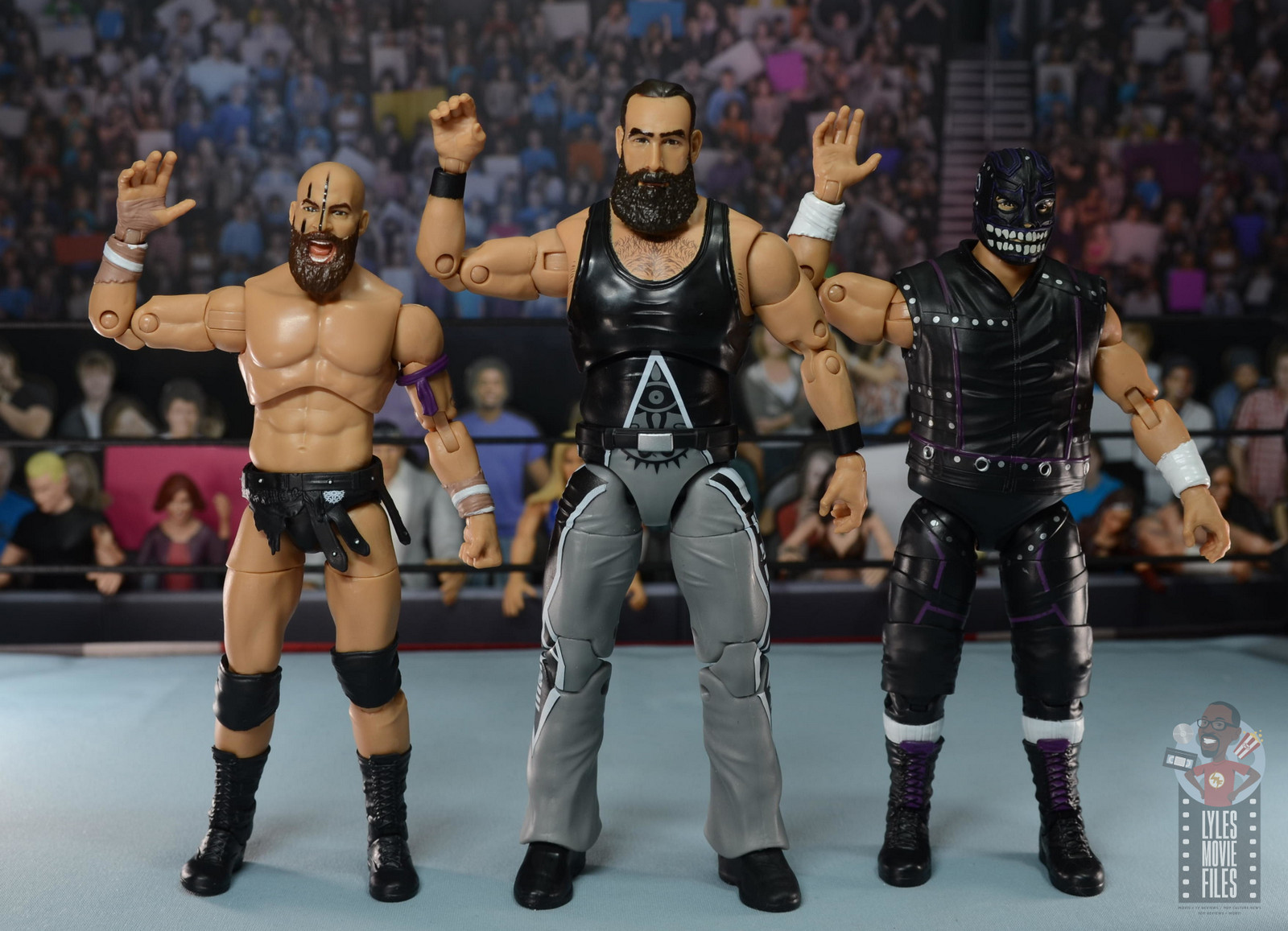 Where to get it?  Target has definitely improved on getting these guys on the shelves and is your best option. Amazon has him in now as well.