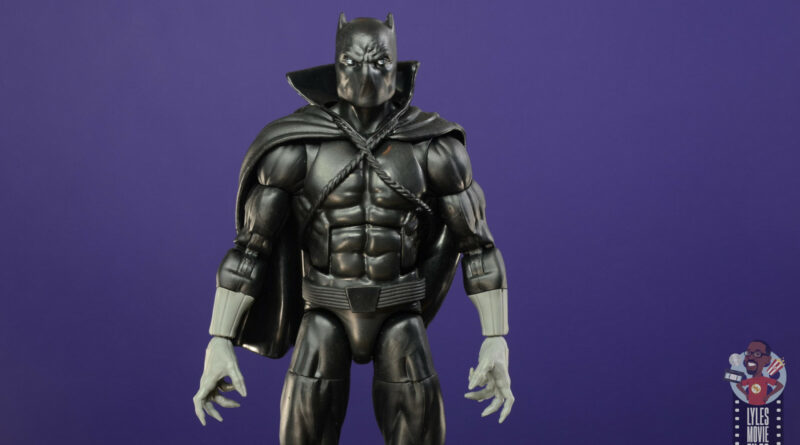 With Black Panther: Wakanda Forever coming to theaters Friday, I figured now was the ideal time to review the comic book Black Panther from the latest Marvel Legends wave.

I was excited about an updated comic book BP as the Bucky Cap mold was too scrawny for him. The beauty of the movie waves is when Hasbro cranks out some long overdue updates like T’Challa. Let’s see if this was worth the upgrade.

Packaging: I’m not a fan of this new presentation at all. The front features a picture of the figure with no window to see the quality of the paint job, the major concern with Hasbro’s switch to plastic free packages.

I do like the emphasis of white and purple accents as well as the comic book Black Panther logo.

The side portrait comic book art is solid but now the other side is the part breakdown for the BAF. 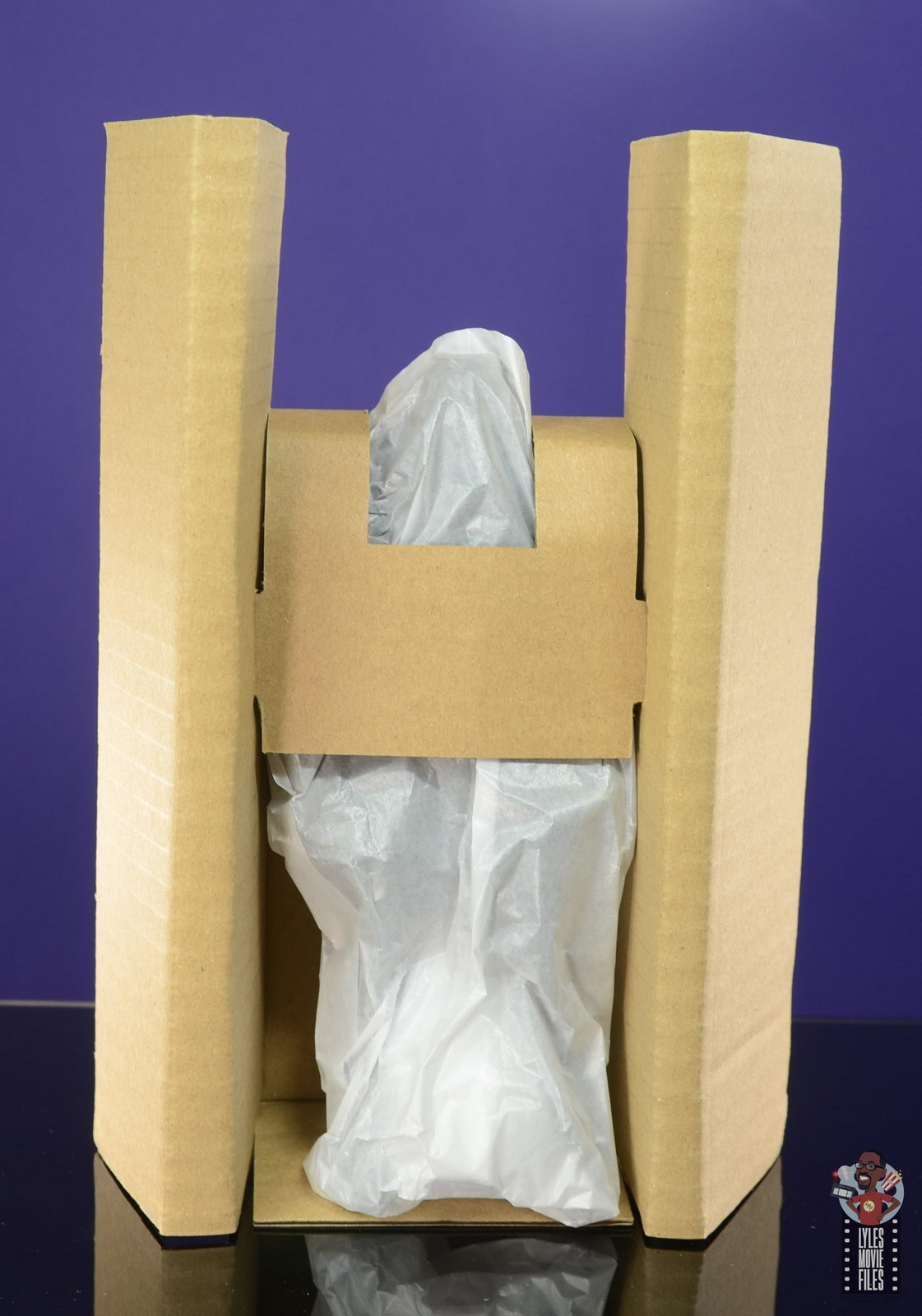 I’m less impressed with the rear, which doesn’t have any bio now and just features another shot of the figure and accessories.

Likeness:  This is a nice classic style Black Panther. His head sculpt seems more influenced by the Mark Texeria version than the 70s style portrait. I like this more as it resembles a mask going over his head. 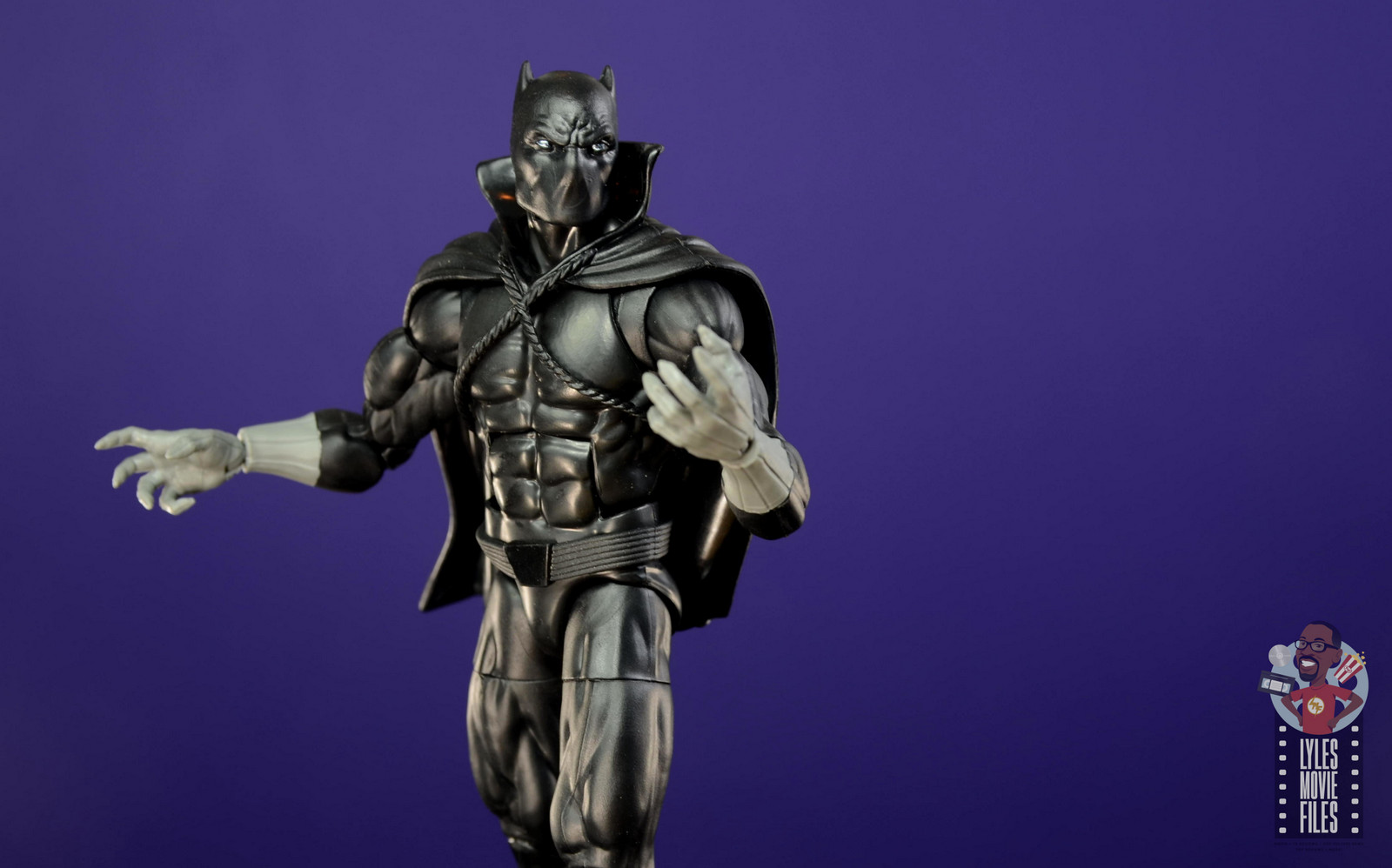 Hasbro opted with giving T’Challa his short cape here, which is a nice way to distinguish this figure from earlier ones. I can’t recall seeing any look with two straps connecting the cape, but going with just one might not have been practical. 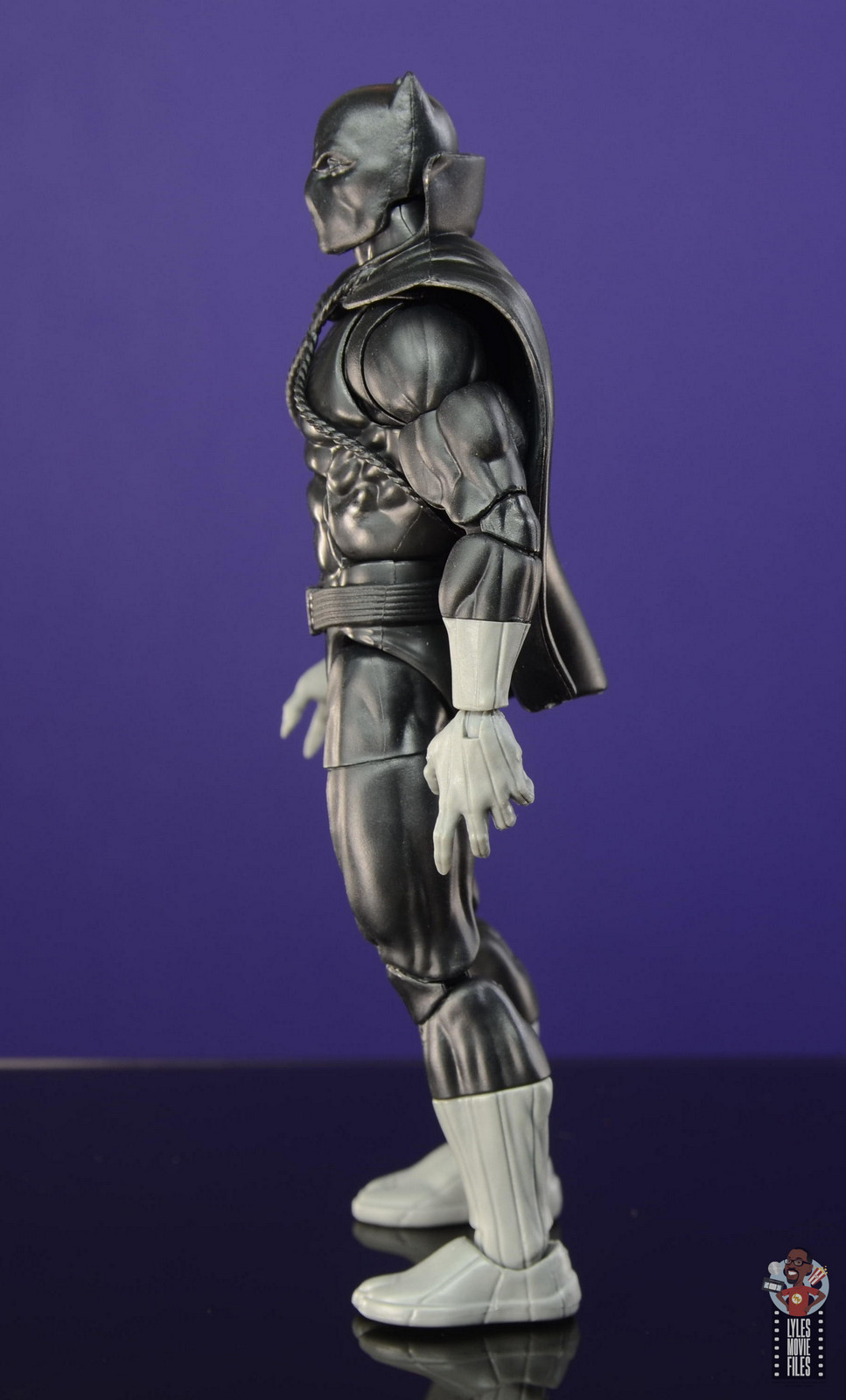 I really like the grooved gloves and boots, which are sculpted instead of being painted on like other BP figures. 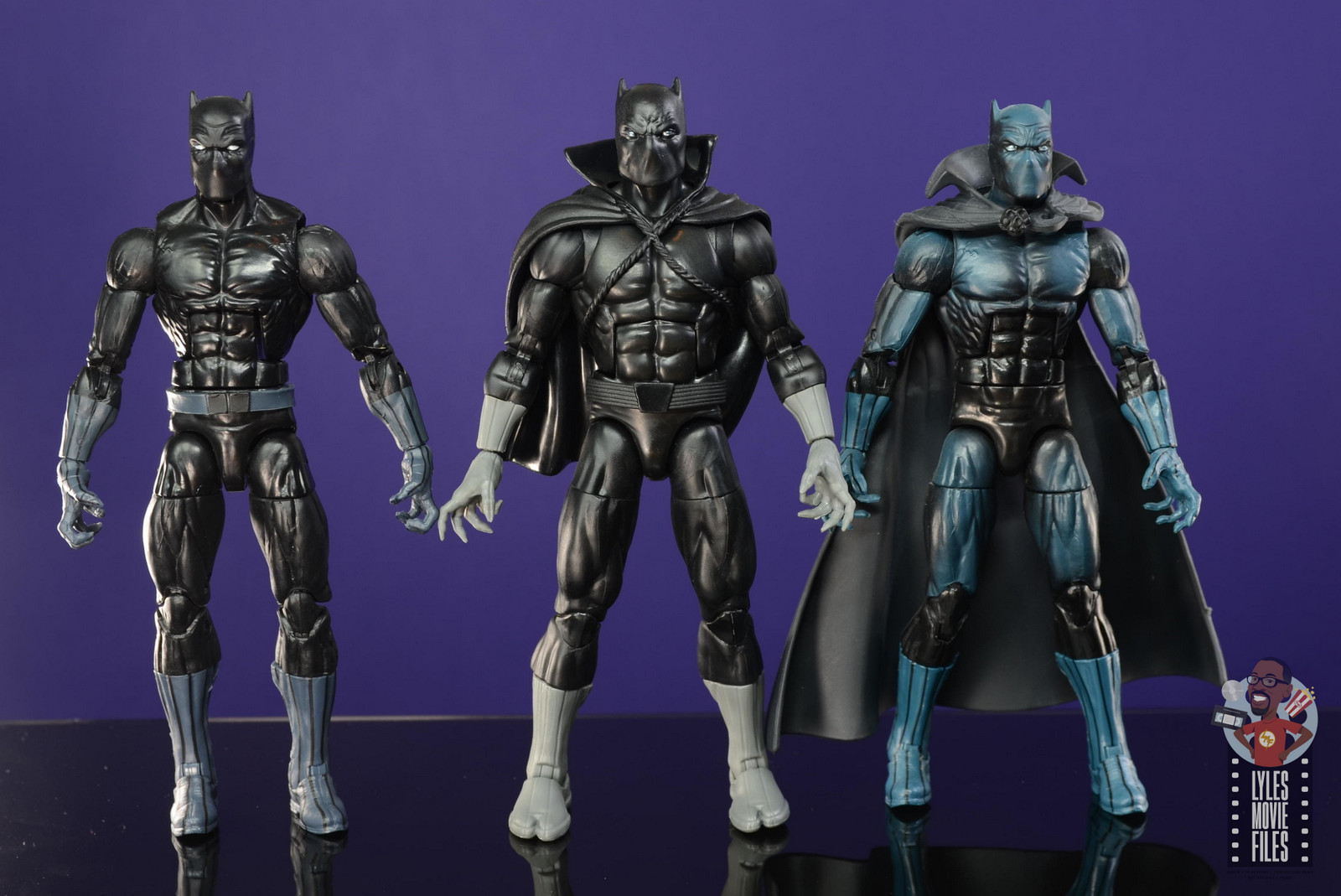 I also dig the sculpted claw hands, which make Panther look formidable. Panther’s boots have a split toe set up, which I know is from some comic run even if I can’t place it now. 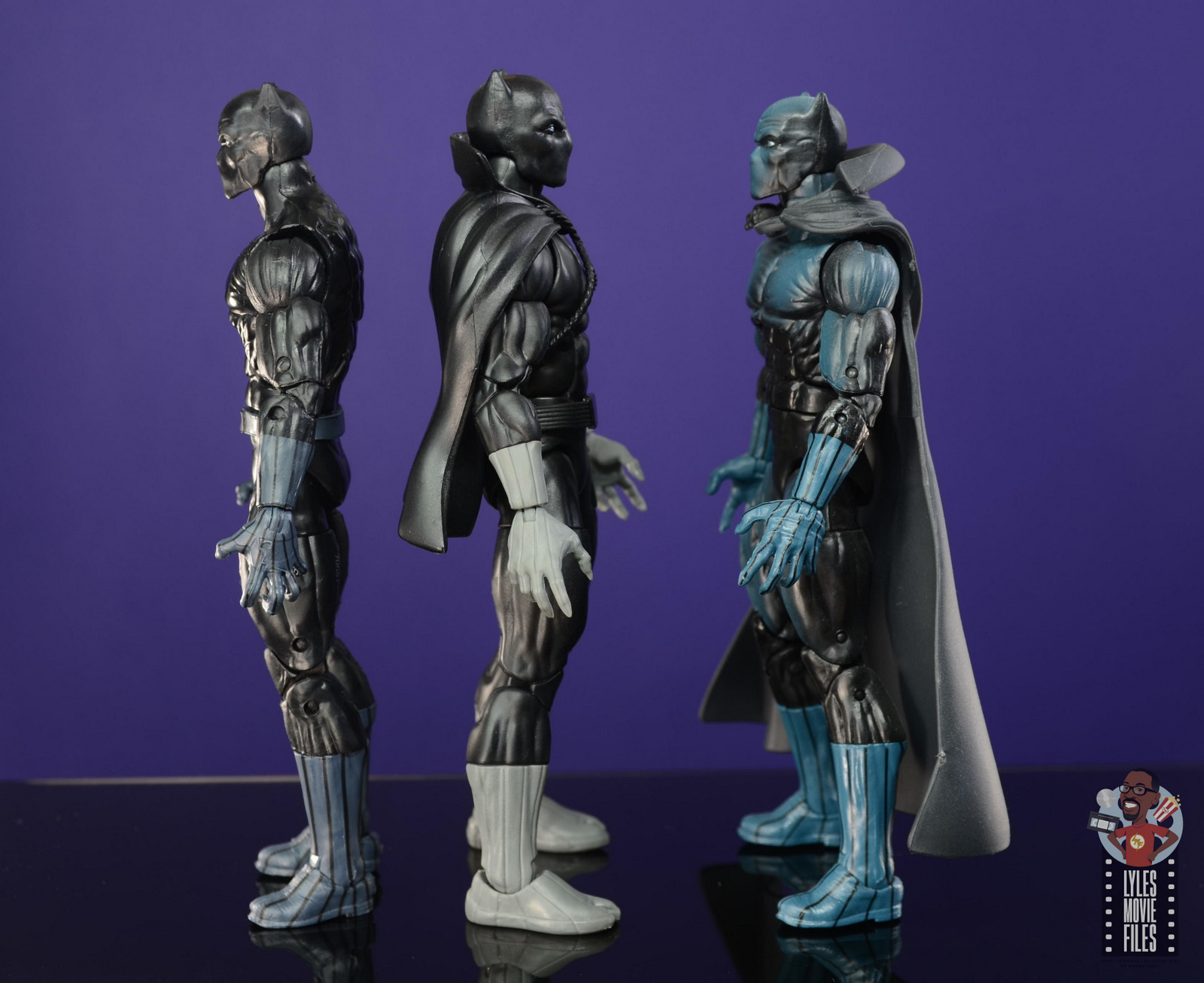 Paint:  Black Panther doesn’t have a lot of color. The grey gloves and boots are a solid color although they probably could be a darker shade of grey.

Panther’s base body is a flat black. The only other color is his silver eyes. 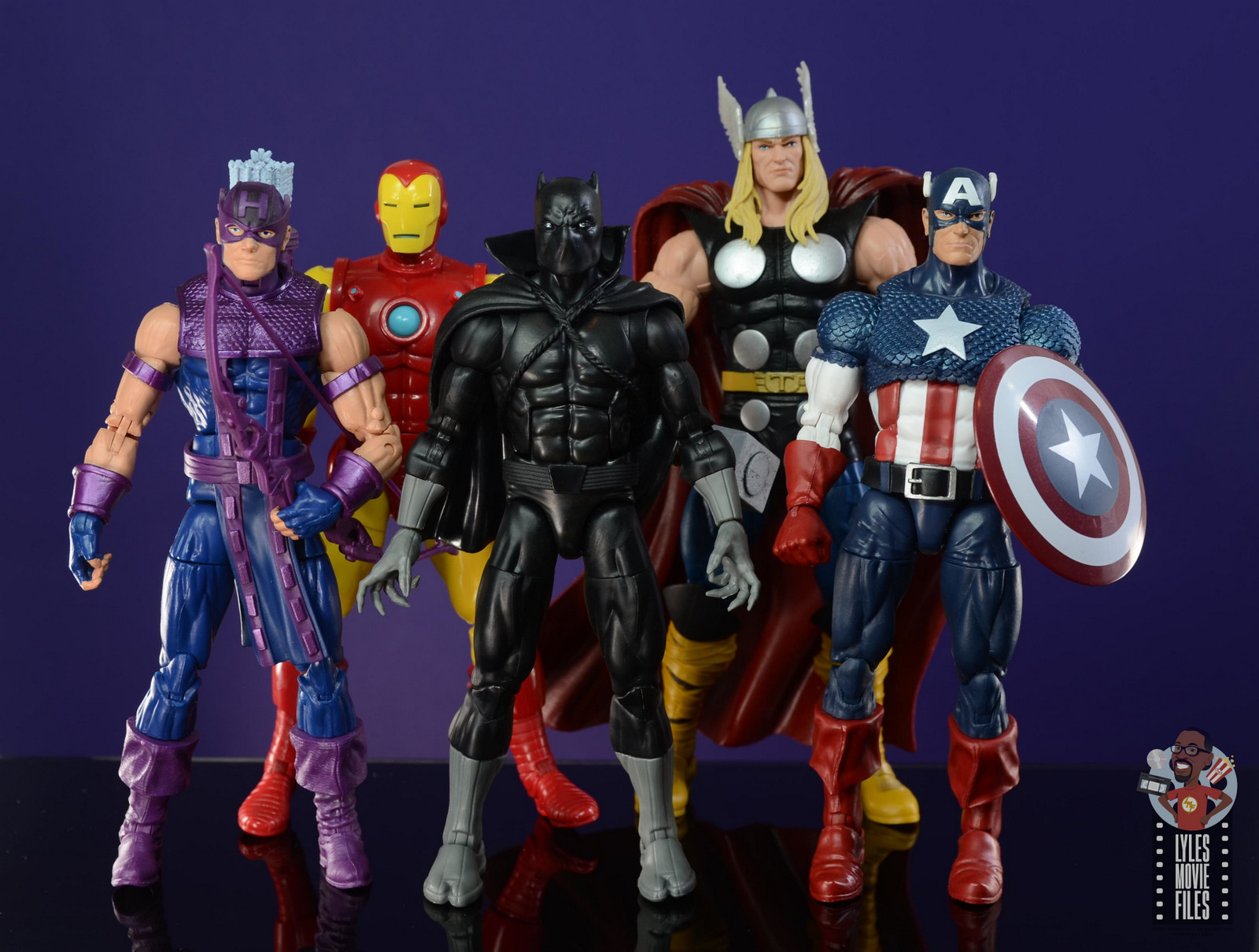 Scale: The Bucky Cap mold left T’Challa undersized on all fronts to a character like the Captain America on the Grim Reaper mold. Now he’s thicker and looks more formidable. He still stands shorter than the 80th Cap, Iron Man and Thor, but now looks more like he’s part of the same line. 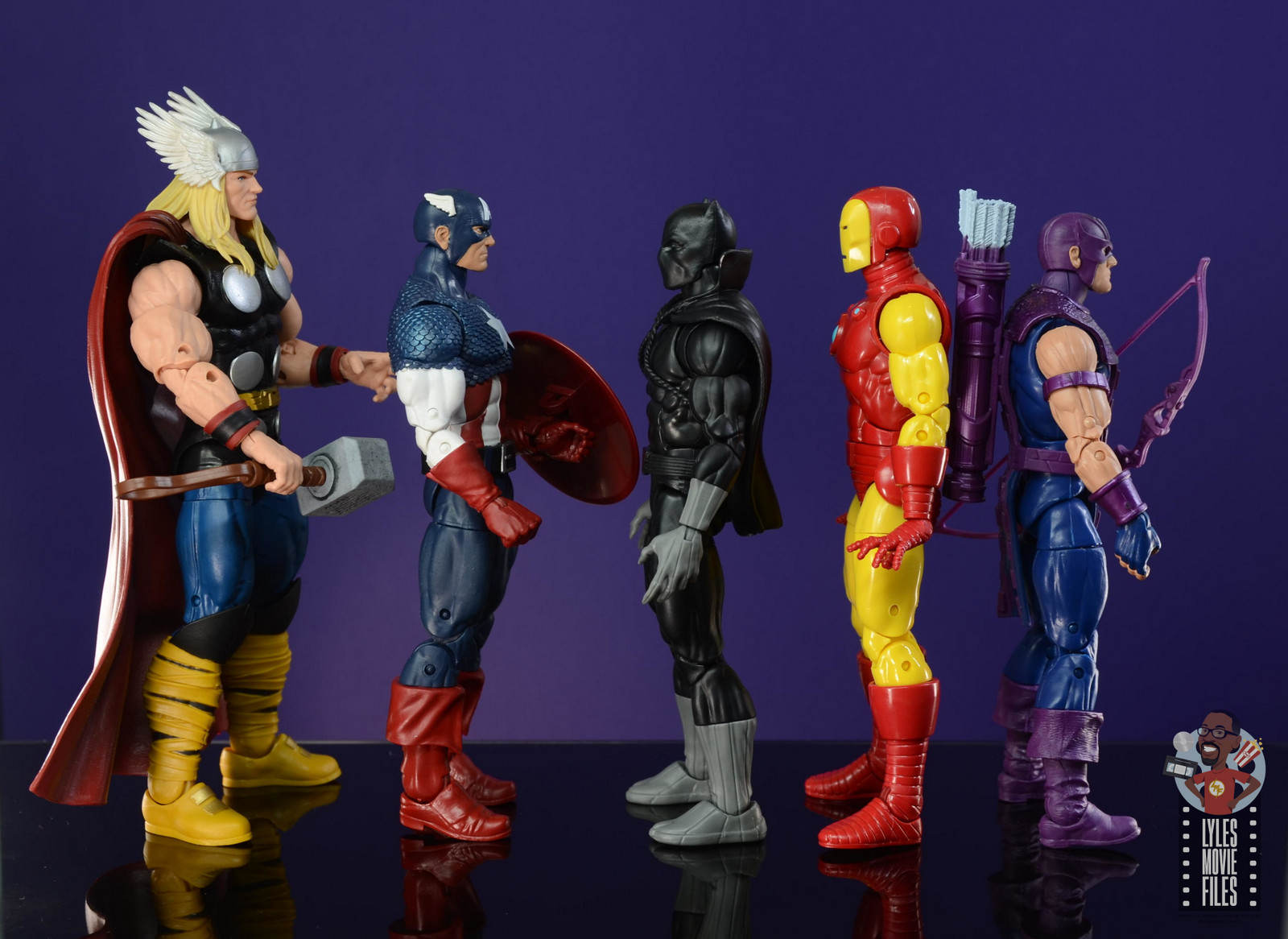 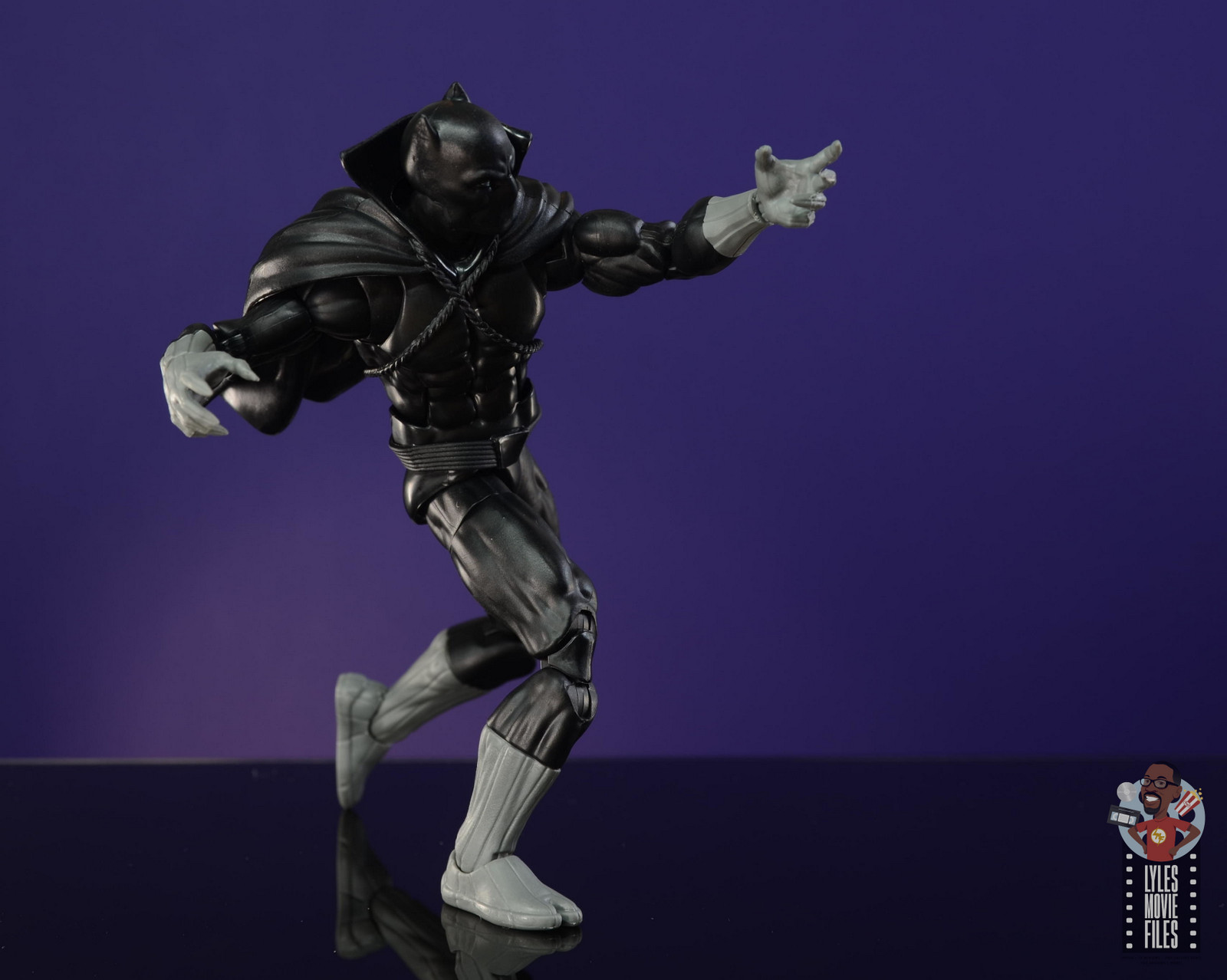 Articulation: So far, this Vulcan mold has worked well and is a good main base body. The butterfly shoulders have good range although the cape limits some of the movement. I was able to get some nice crouching and signature Black Panther stances. 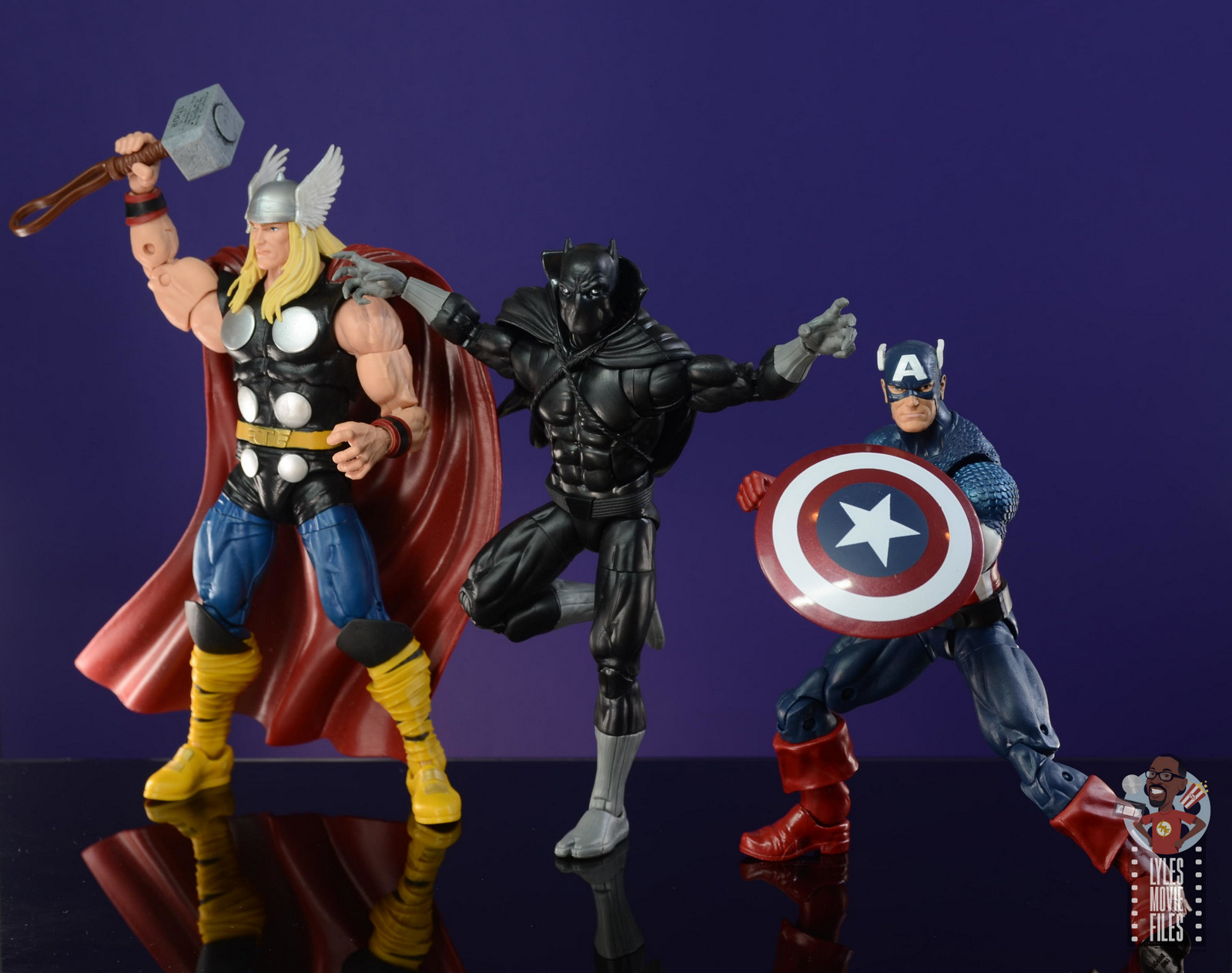 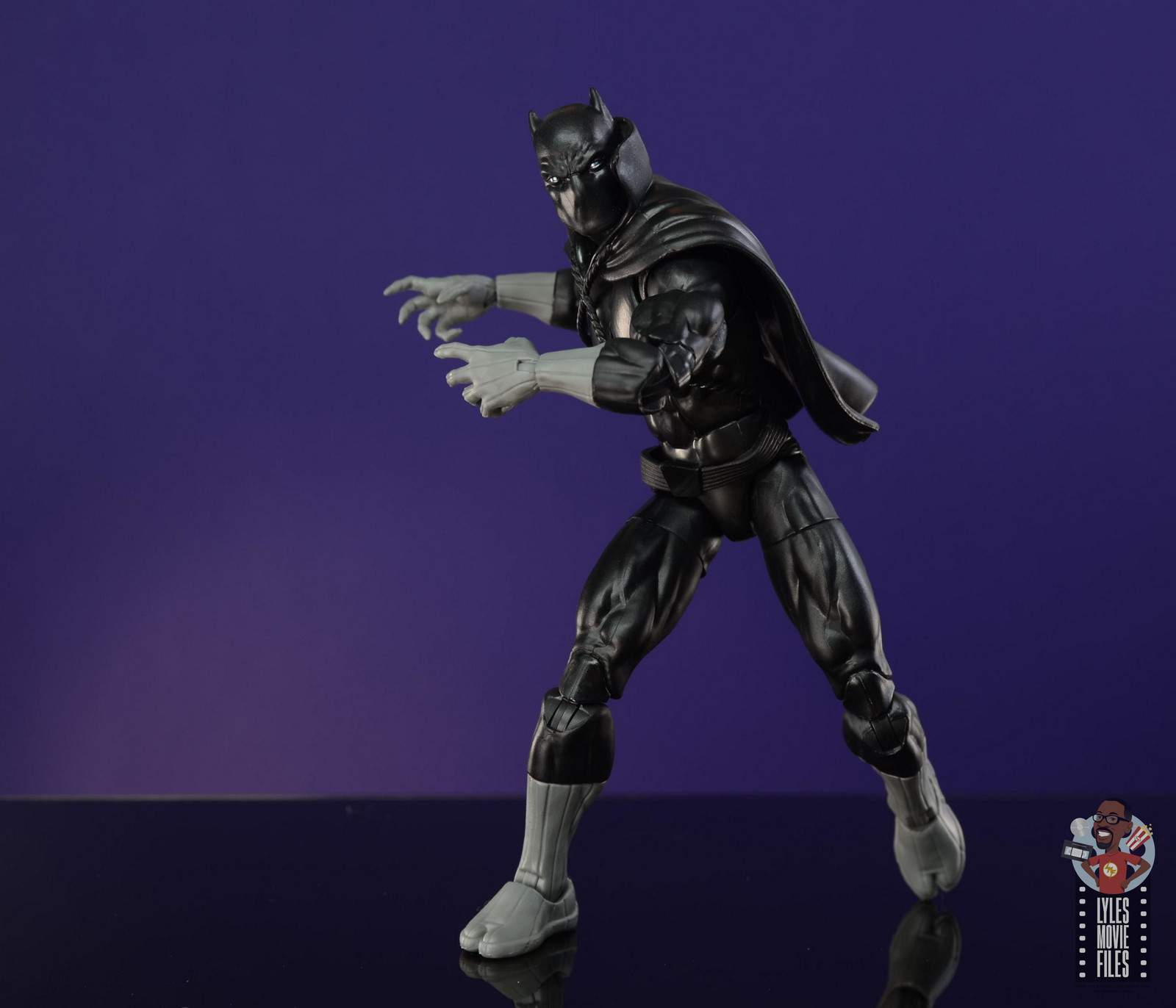 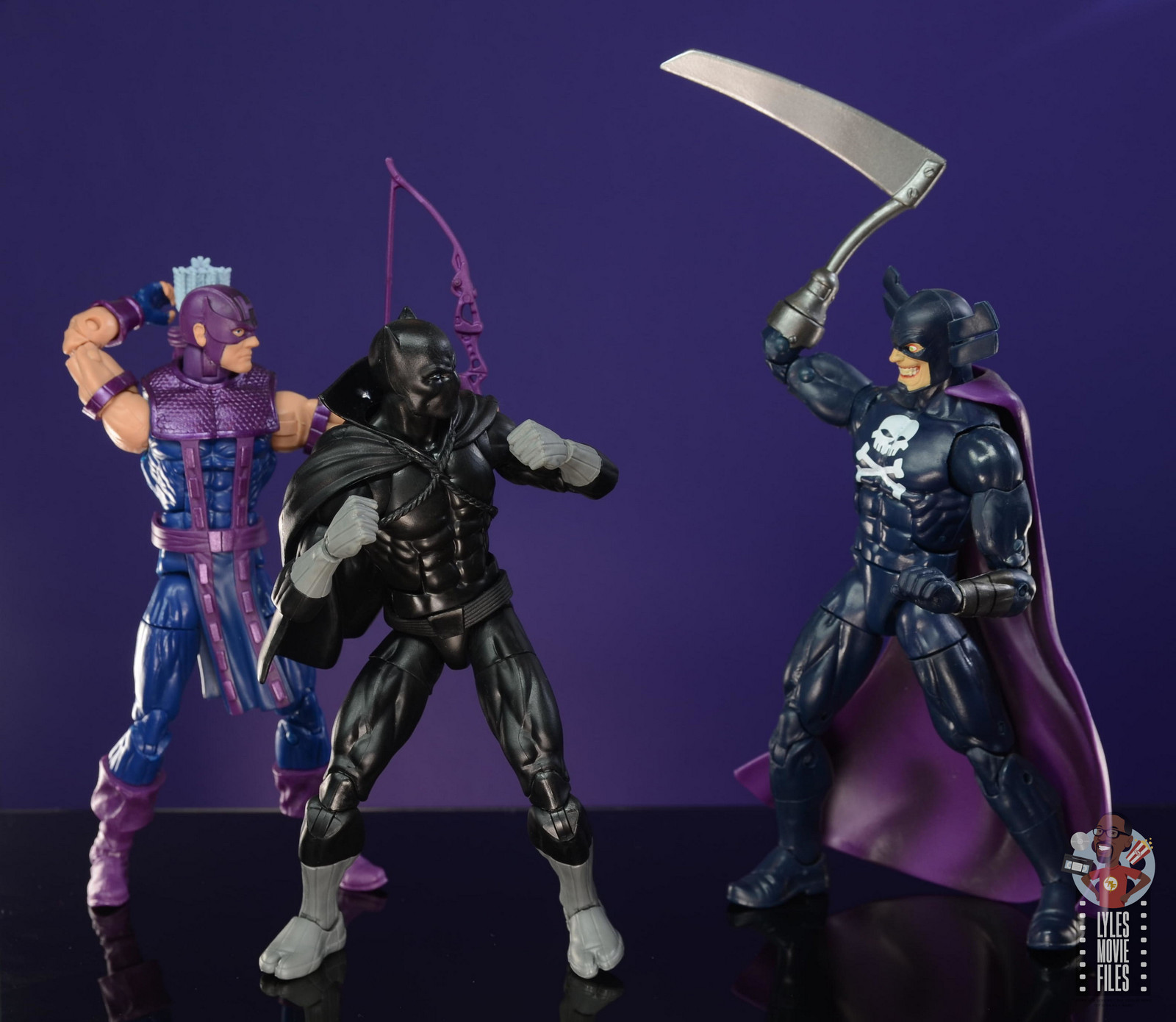 Accessories:  T’Challa isn’t overflowing with accessories. He’s got a pair of swappable fists. That’s sensible for him and allows from a nice break from the all-claws all the time of some other figures. 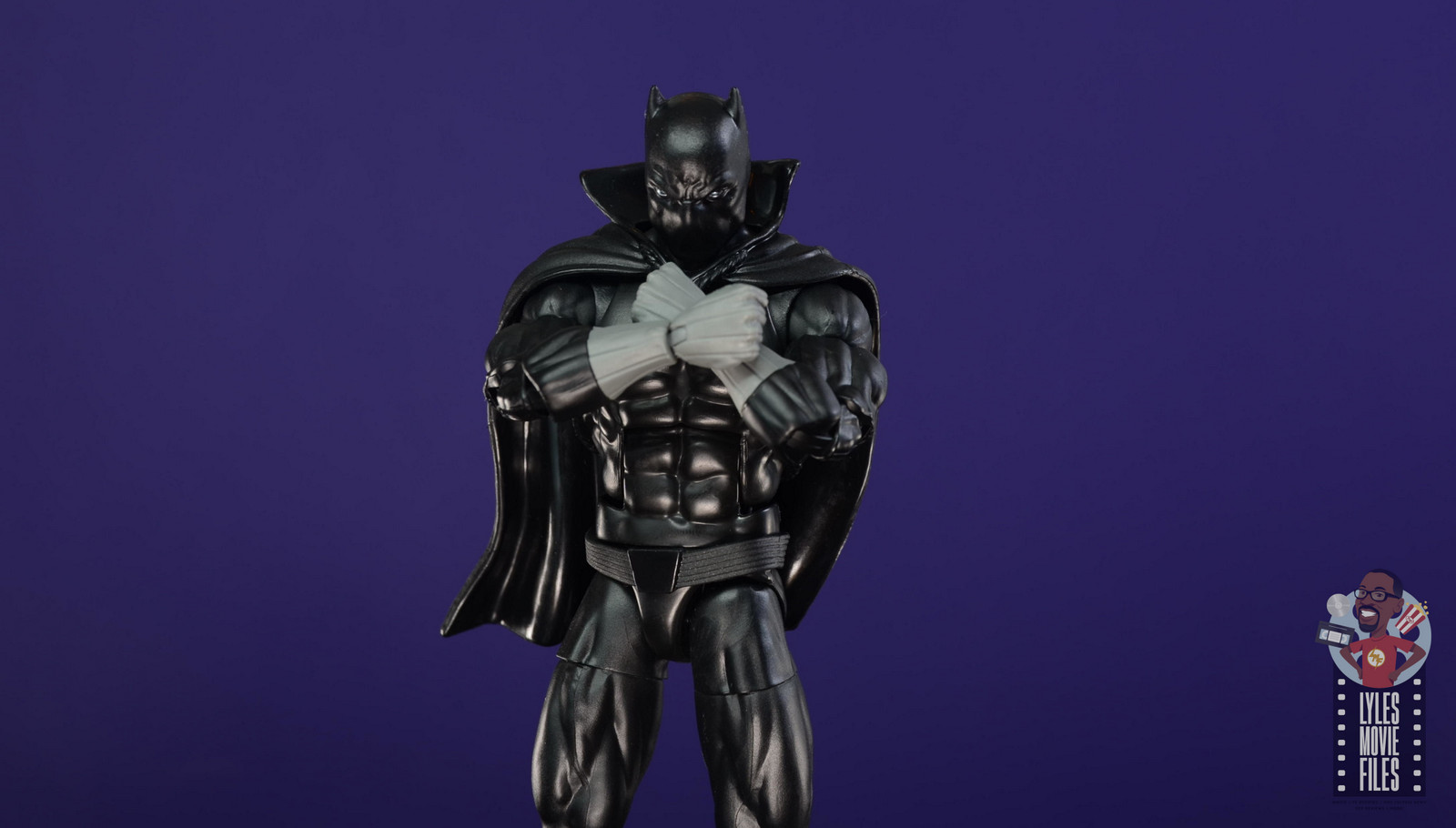 Additionally, he comes with the left leg of the Build-A-Figure Attuma.

I wish the cape were easily removable.

Worth it?  This wave typically retails for $24.99. That’s not an ideal price point for Marvel Legends figures, but I got Black Panther for $18.74 thanks to a coupon. Anytime you can go under $20 for Marvel Legends it’s a good deal.

This is a fantastic update of the comic book Black Panther style. He fits in nicely with the other updated Avengers with the only thing holding him back is the cape as it just hinders a little of the articulation. 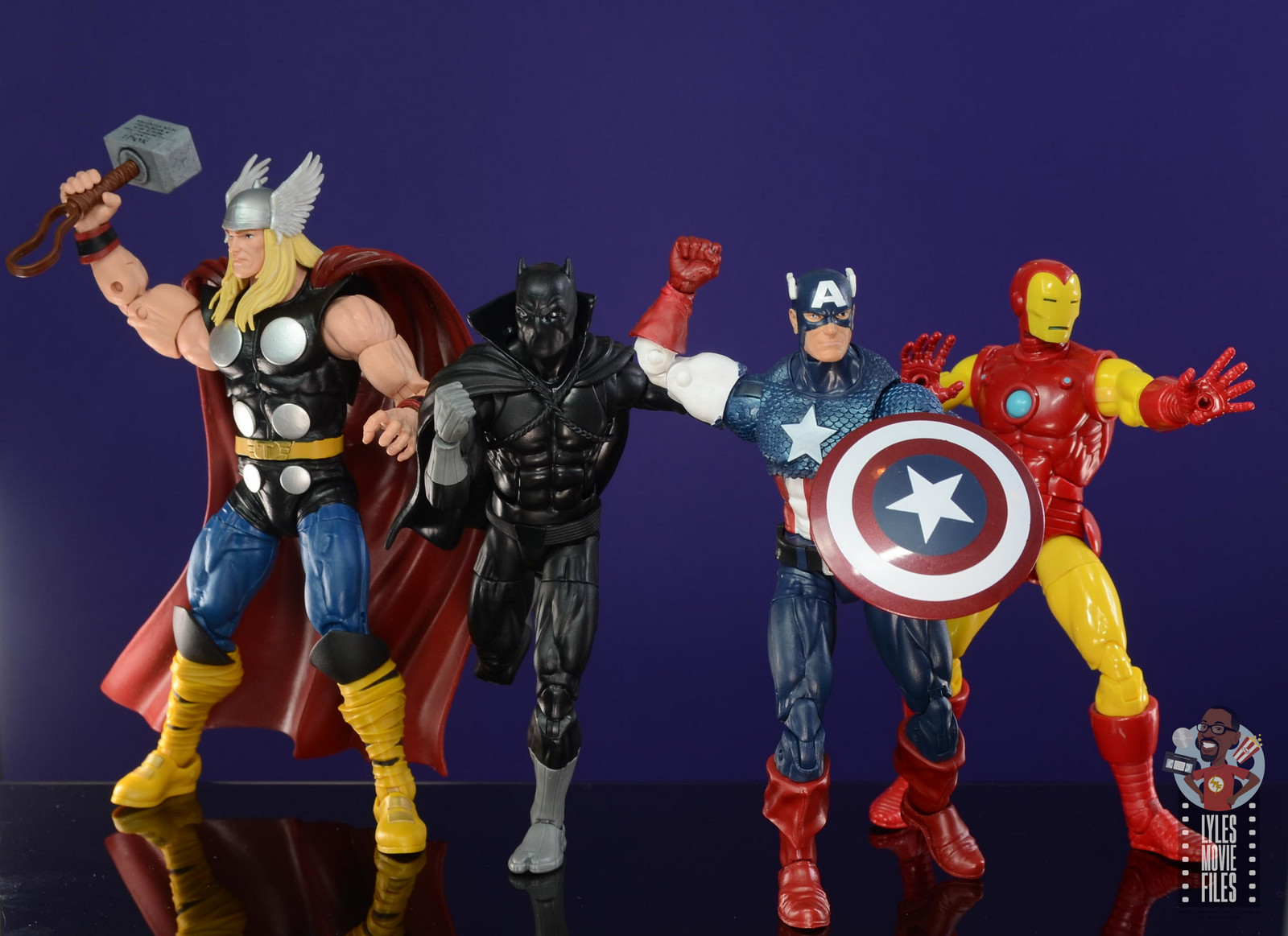 Where to get it?  My local Targets haven’t gotten this wave in yet, but I’ve seen them at Best Buy. You can get him from Amazon or Entertainment Earth.

As an Amazon and Entertainment Earth affiliate, I earn from qualifying purchases.