Andor’s first season has reached the home stretch. After last week’s incredible episode, this didn’t need to be at that level yet it’s the penultimate installment of the season so it needs to finish setting the stage for the finale.

Did Daughter of Ferrix deliver? It’s Andor so you already know the answer to that question, but this really left me hyped for next week.

Cassian and Melshi have successfully made it to the shore and scouted a ship they can “borrow” to get off this planet and return to civilization. For all their prison instincts, they fail to consider the ship’s owners having booby traps in place to ensnare potential thieves. Good thing the fisherman/pilots decide they’re not dangerous threats and not only release them but offer to give them a ride to Niamos.

That’s the only bit of good news coming Cassian’s way as back home in Ferrix, his friends are preparing funeral arrangements for Maarva. She was well loved in the community so the somber mood was expected, but B2EMO’s grieving reaction was surprisingly emotional. And I thought R2 had a lock on devotion. 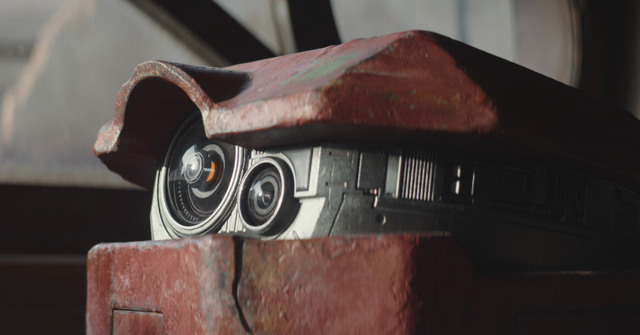 The word is out now and everyone from Cinta, Dedra, Syril and Luthen knows Maarva is dead. Everyone except the most important person. This triggers a race to Ferrix for those not already there awaiting Cassian’s return.

Back at Coruscant, Mon Mothma reveals to Vel just how deep she’s gotten in trying to hide her financial contributions to the rebels. She’s run out of options and now has to seriously consider letting her daughter get married off to Davo Sculdane’s son. 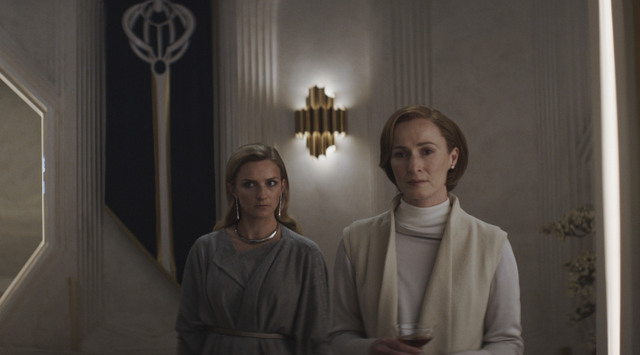 I say good riddance. Her daughter is too pampered and spoiled to make much of a rebel anyway. Again, Geneveve O’Reilly has killed in all of these scenes.

Speaking of killing scenes, it’s time for Stellan Skarsgard to put the finishing touches on this Supporting Actor nomination campaign. No better way to seal it than with Luthen paying Saw Gerrera a visit. Forest Whitaker does such a great job of selling Saw’s hyper paranoia that his scattered thoughts and suspicion comes off perfectly legitimate.

Saw is now down to work with Kreegyr as Luthen suggested earlier. Course now, that offer is off the table since Luthen has to sacrifice Kreegyr to maintain Lonni’s cover. Luthen has to give up a little intel namely that Saw could identify him if he were caught.

Kreegyr couldn’t thanks to Luthen’s healthy dose of paranoia of his own. While he might be leery and distrustful, Saw understands sacrifices have to be made for the greater good of war.

With plans constantly changing, Luthen decides it might be in his best interest to retrieve Cassian himself and has a smoothly coded message with Kleya, who warns him against heading to Ferrix. That might be a moot point since the crew of a random Imperial cruiser decides to make an example of him and bully him for practice.

What follows is a rare humbling moment for the Empire as Luthen proceeds to systematically wipe out the cruiser’s defenses and spectacularly dismantle the TIE fighters in pursuit. Andor hasn’t had a ton of dogfights, but this one was superb and a rare moment of some of that classic Star Wars humor.

Back at Niamos, Cassian finally makes a call back to Ferrix to give his mom an update.  But a lot has changed on the homestead since he’s been gone and the news that Maarva is dead has Cassian in shock. Melshi reminds him of their plan to tell the galaxy what really happened at the prison and as agreed upon the best way to do that is to split up. That actually frees Cassian up to return home to Ferrix where everyone is waiting on him.