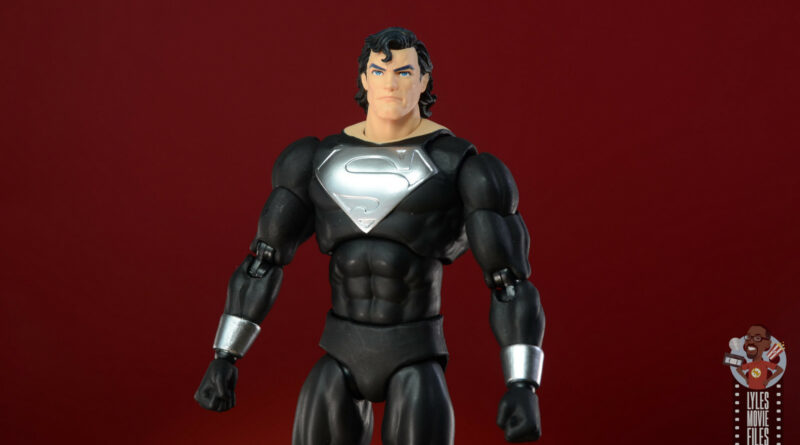 Mafex has a tough challenge beating out the DC Direct’s superb take on the Reign of the Supermen figures. We know an impressive looking Steel and Cyborg Superman are coming, but Mafex kicked its ROTS line with the hero that turned the tide of the event – Superman.

Not quite fully recovered from his death at the hands of Doomsday, Superman rocked the black and silver regeneration suit. It was a sleek alternate look for the Man of Steel and has been used in comics, TV (Smallville) and Zack Snyder’s Justice League making for one of the most popular variant costumes.

But this is the inspiration, and it was key for Mafex to knock this out. Let’s see if this gets the storyline off on the right track or if DC Direct will take the early lead.

Packaging: Mafex doesn’t do anything too wild with its presentation. 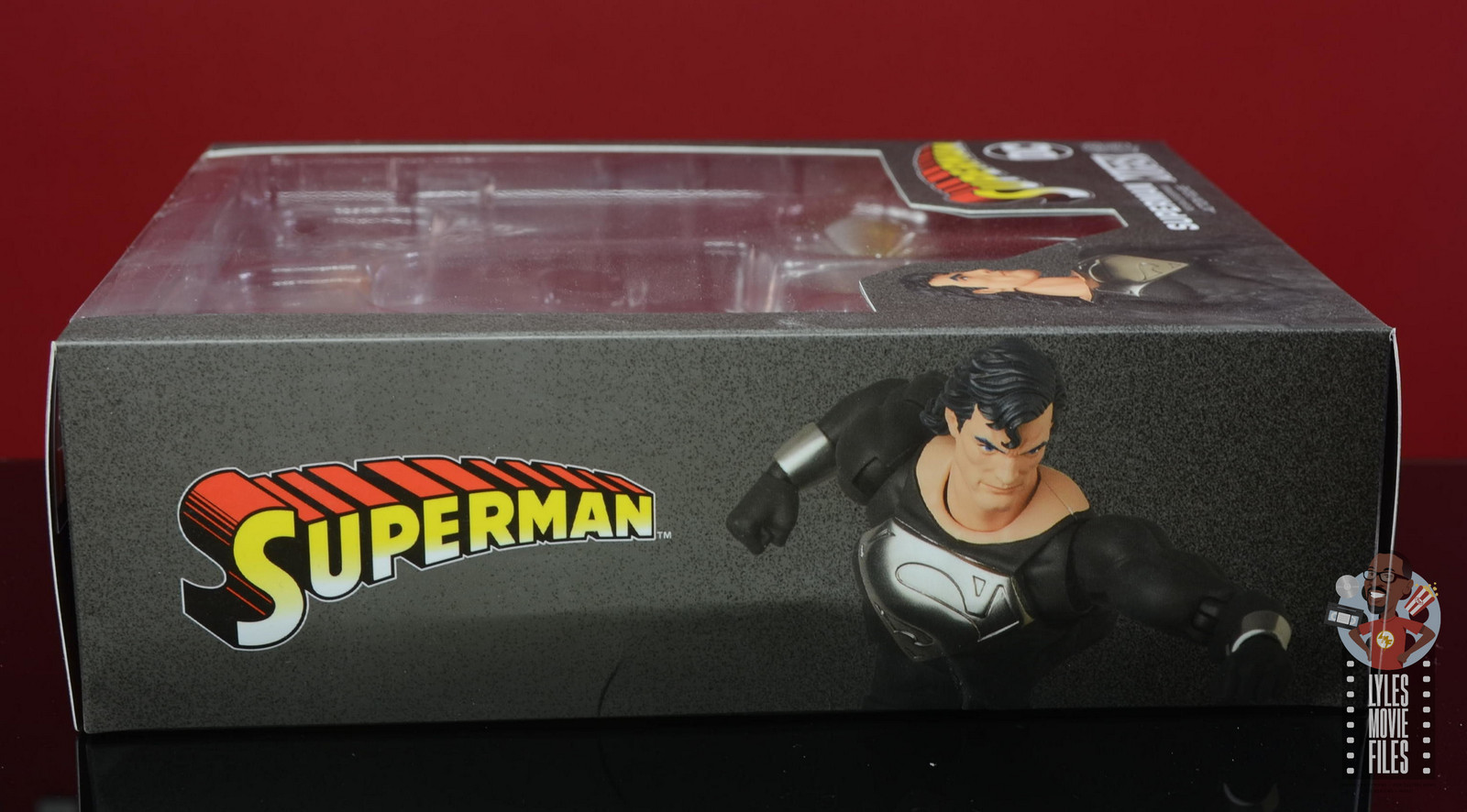 The figure is packed in a grey scale box with a nice window to show off all the accessories. Along the side is more shots of the figure while the back showcases the ways you can use the accessories in action.

Likeness: This is Superman’s simplest attire as he’s just wearing a one-piece bodysuit with a raised S-logo, bracelets and steel-toe silver tips. As the big showdown played out, Superman added a makeshift vest of ammo packs and thigh ammo packs/pouches along with an ankle strap. Hey, it was the 90s. 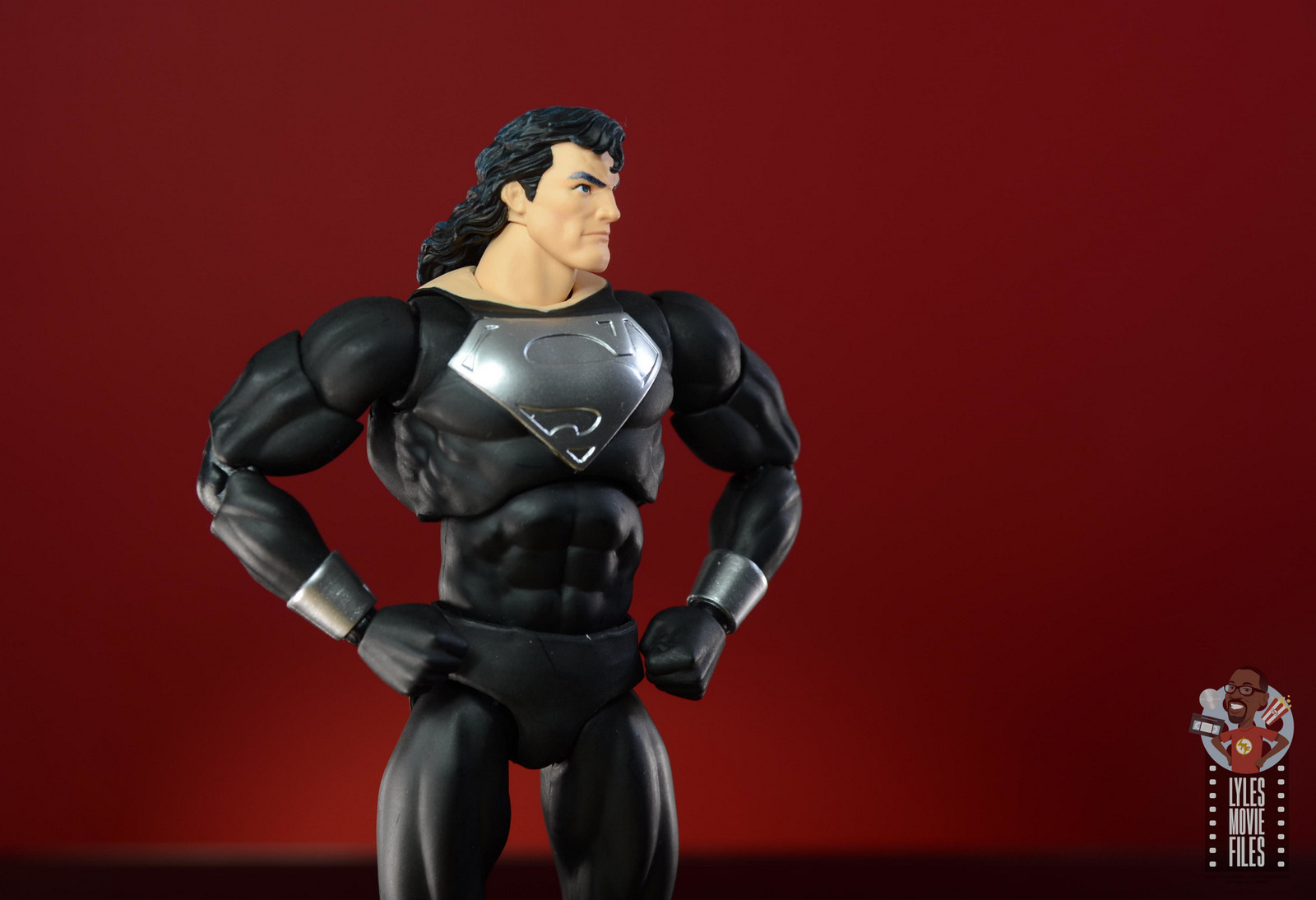 The figure has the streamlined appearance with the fresh out the Kryptonian battle tank appearance. 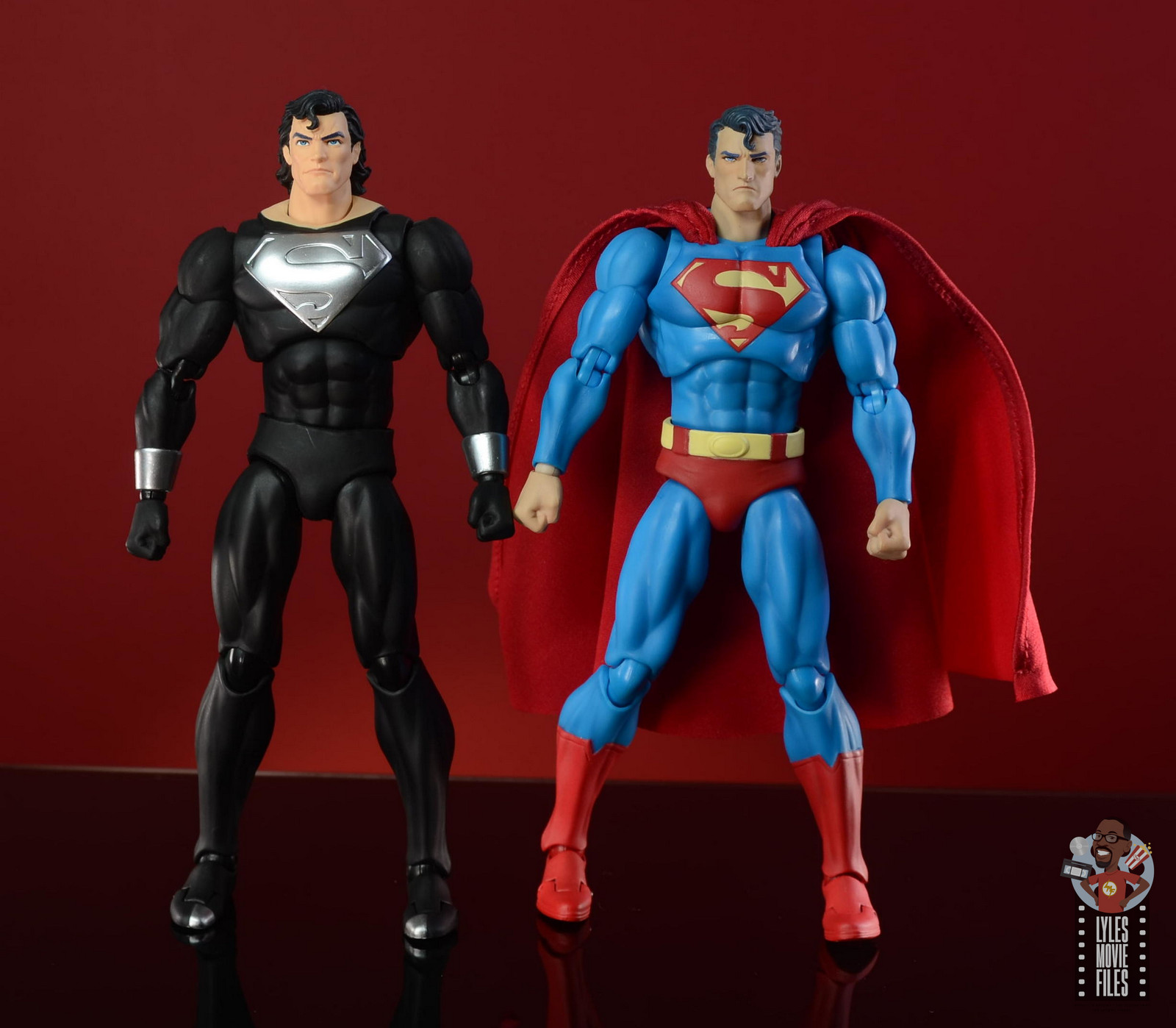 And the default head sculpt is the neutral one with the glorious flowing mullet. Superman was more focused on stopping Cyborg Superman, but he wasn’t in full rage mode so it’s nice to have a calmer expression. 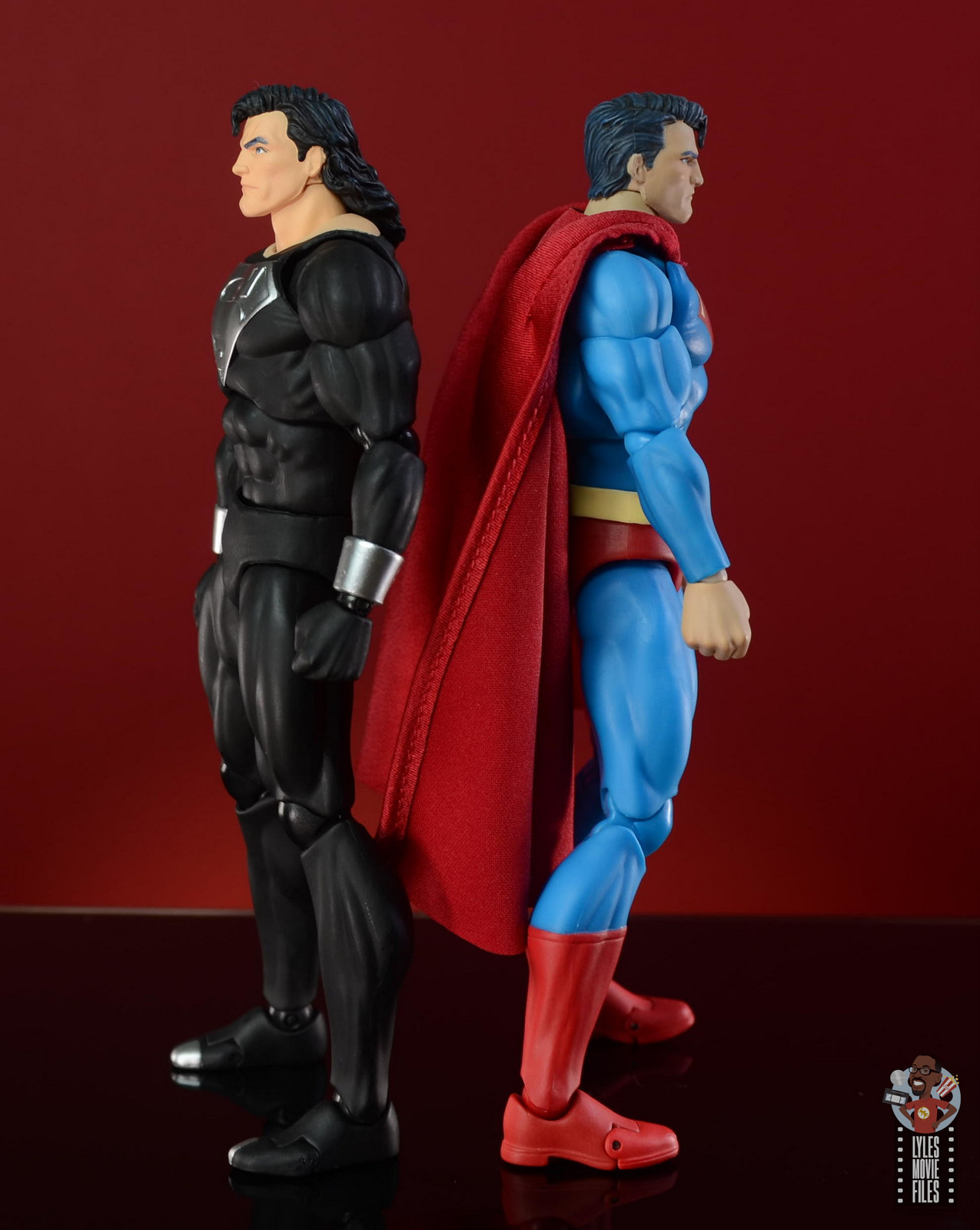 Mafex did a decent job with the open neck piece area although both the DC Direct and Mattel DC Classics versions have more of Superman’s bare collarbone showing.

This was tricky as different artists would vary it up and Mafex incorporated as much as possible before running into issues with the articulation.

The size of the bracelets and steel tips are accurate as well.

Paint:  Mafex utilized a stark flat black for the suit allowing the silver logo, bracelets and feet tips to look even more striking.

I’ve gotten enough Mafex figures to be confident that paint issues won’t be a problem with their figures. 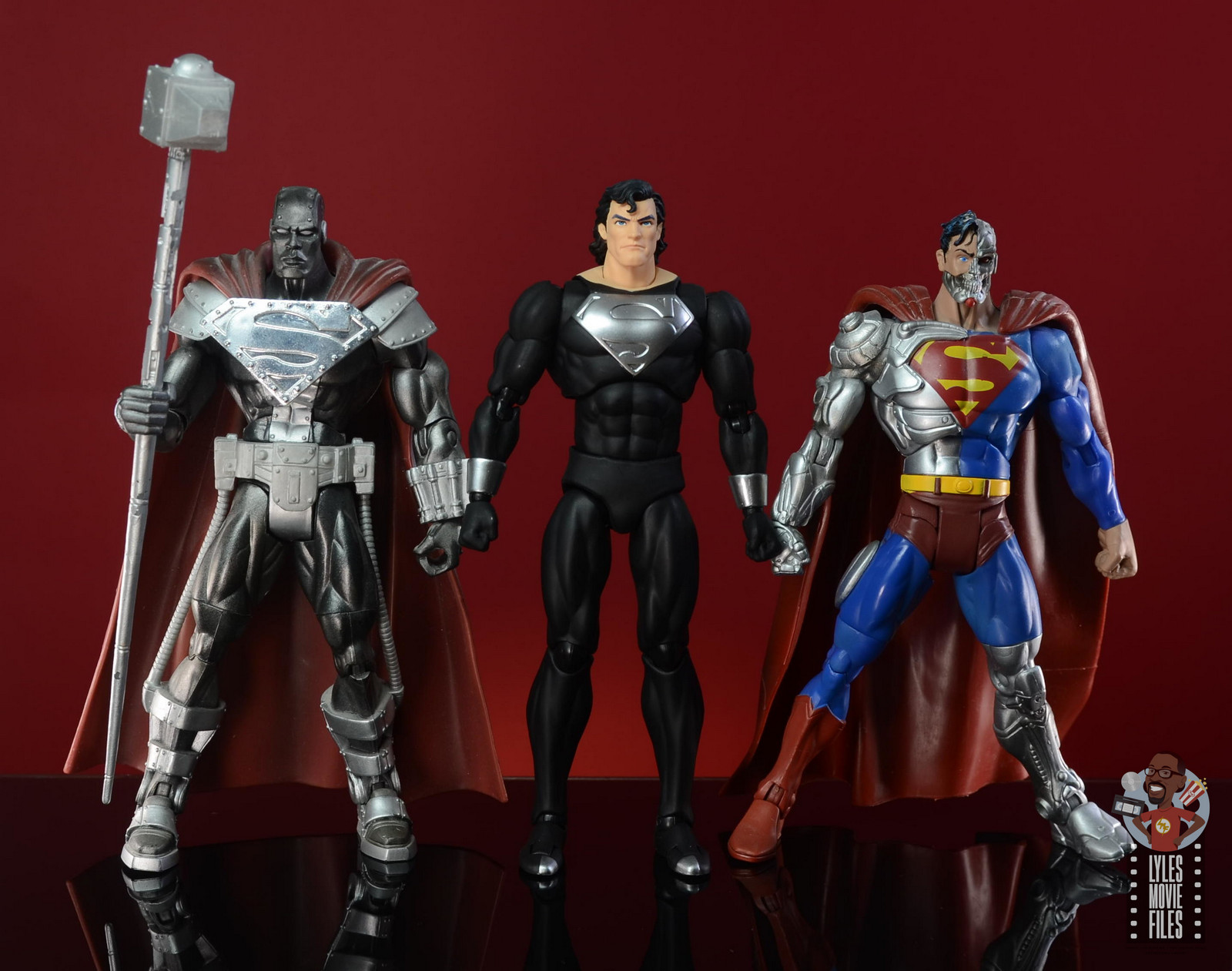 Scale:  Superman should stand as tall as Cyborg Superman, but not be as wide as Steel. Eventually when we get the other two, Eradicator and Superman should be the same height while Superboy is shorter and slighter. 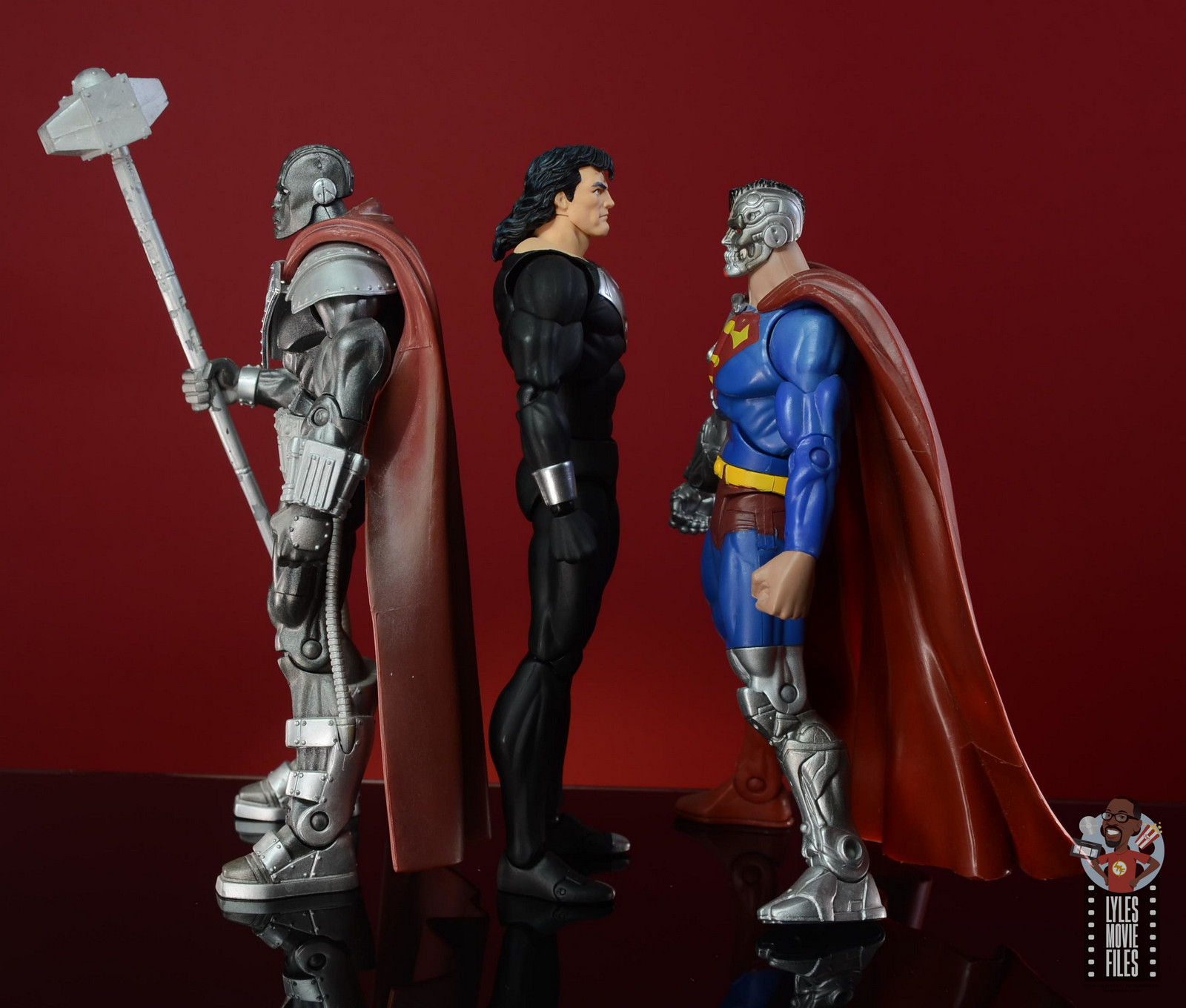 With no other characters from the event around him Superman can be the yardstick for the rest of the figures. The real test of this set of figures will be a noticeably shorter and leaner Superboy. DC Direct knocked their version out while Mattel’s version was far too tall and failed to properly convey much a teen look at all. 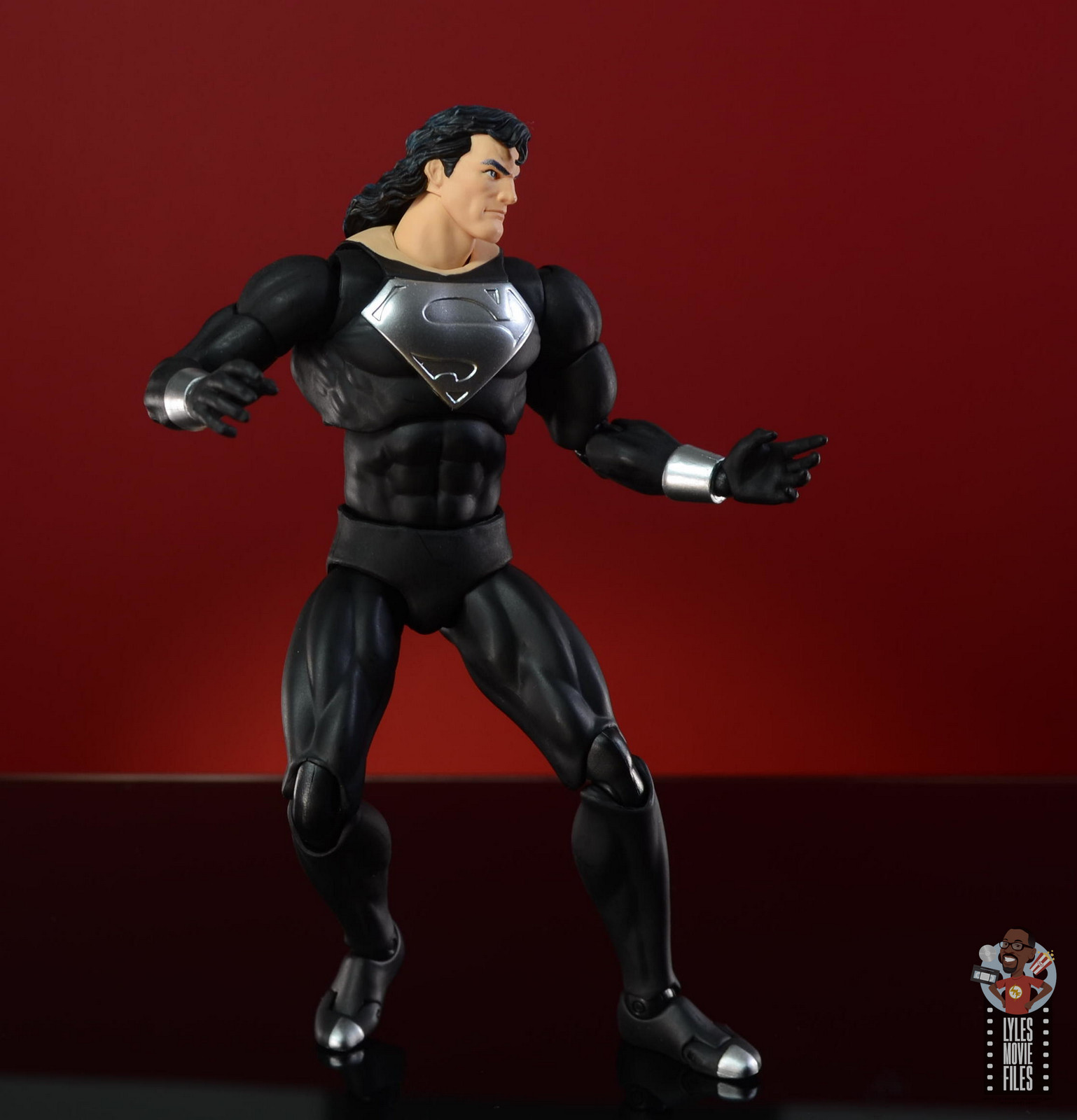 Articulation: Superman wasn’t very involved through most of the storyline, but when he did, he still wasn’t quite back up to Superman standards in terms of fighting. 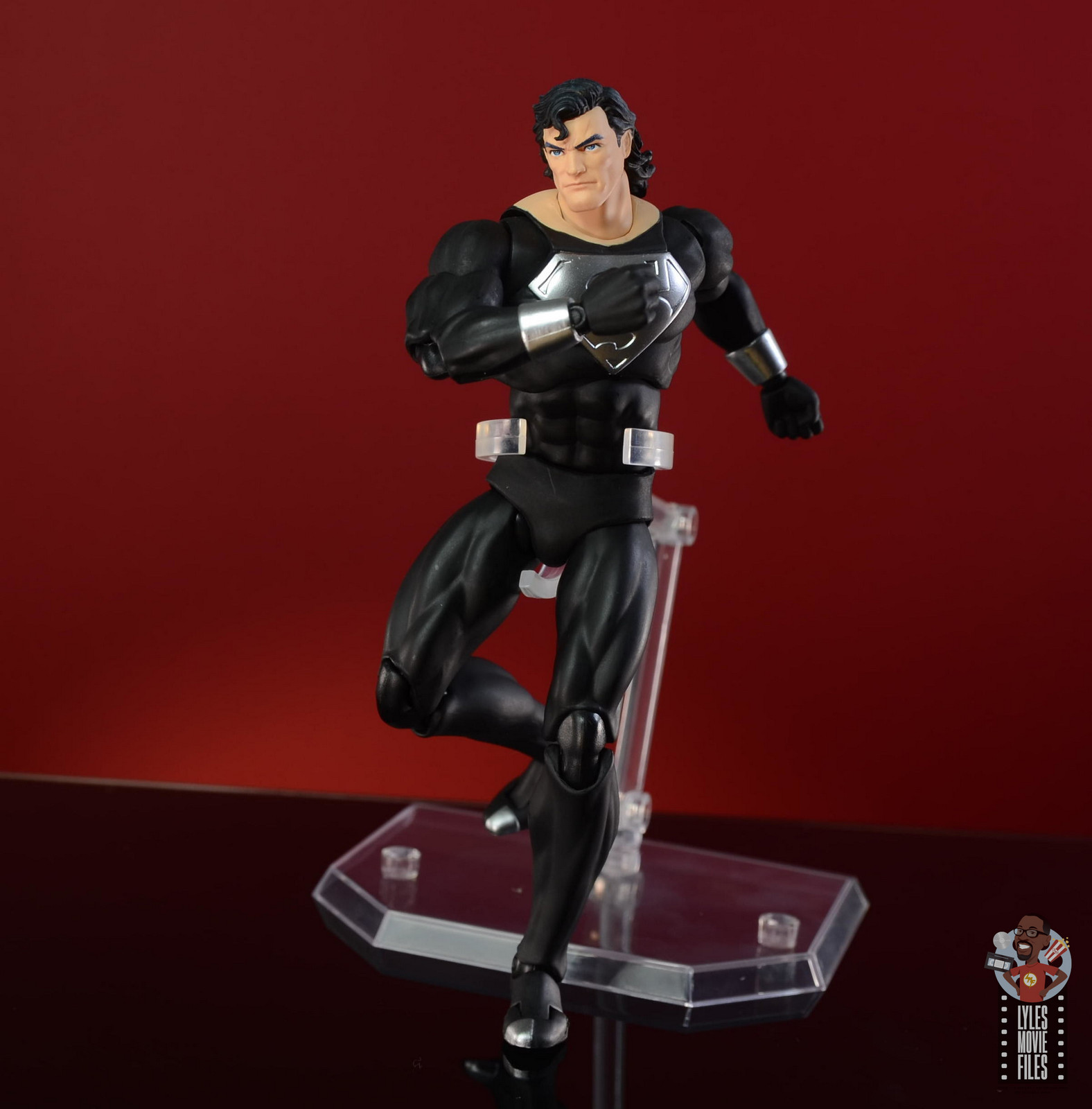 Still, Superman was active in terms of punching, flying with the assistance of rocket boots and even using some blasters so as to not be a complete liability fighting Cyborg Superman. 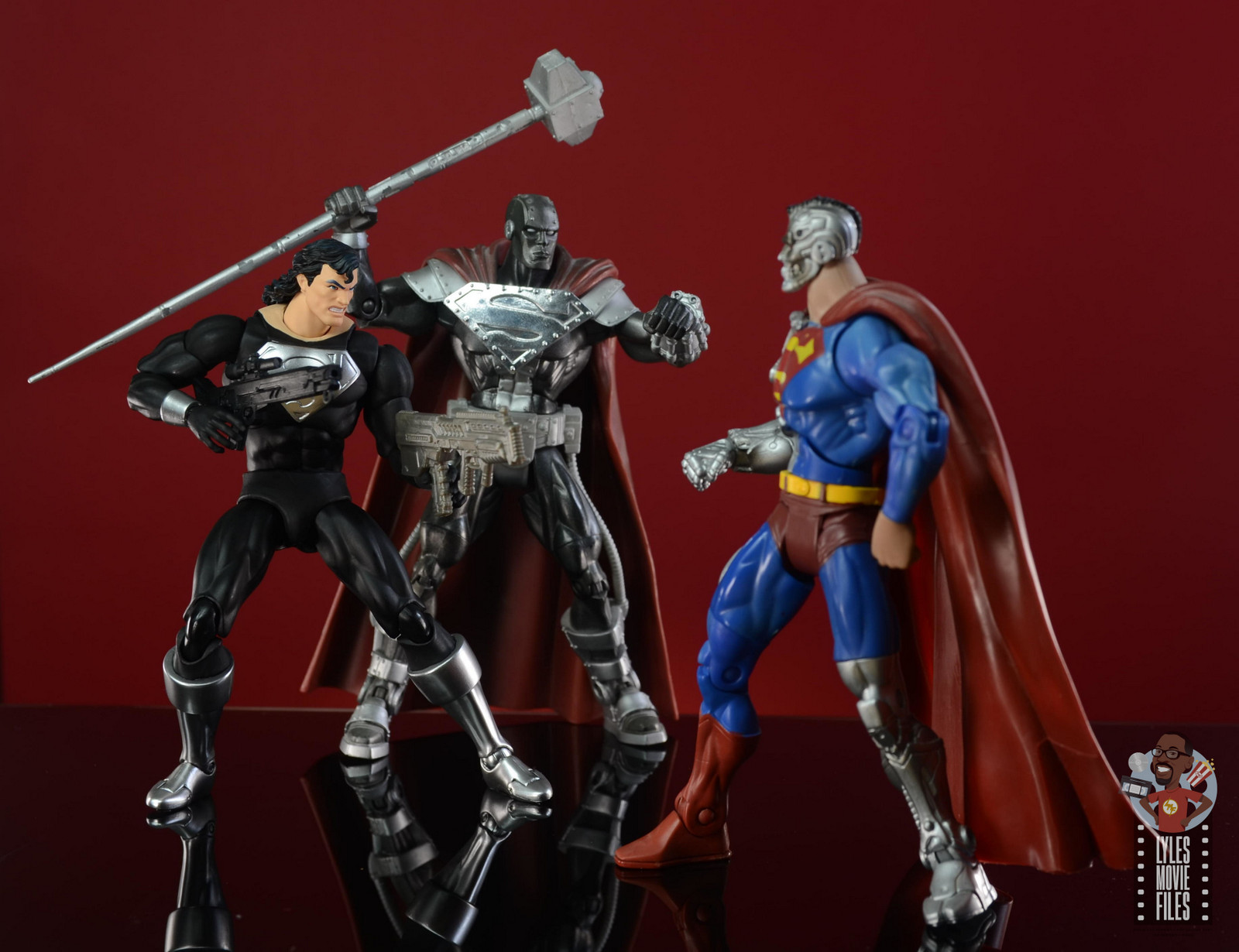 This figure has the expected range of motion and articulation of a standard Mafex figure. 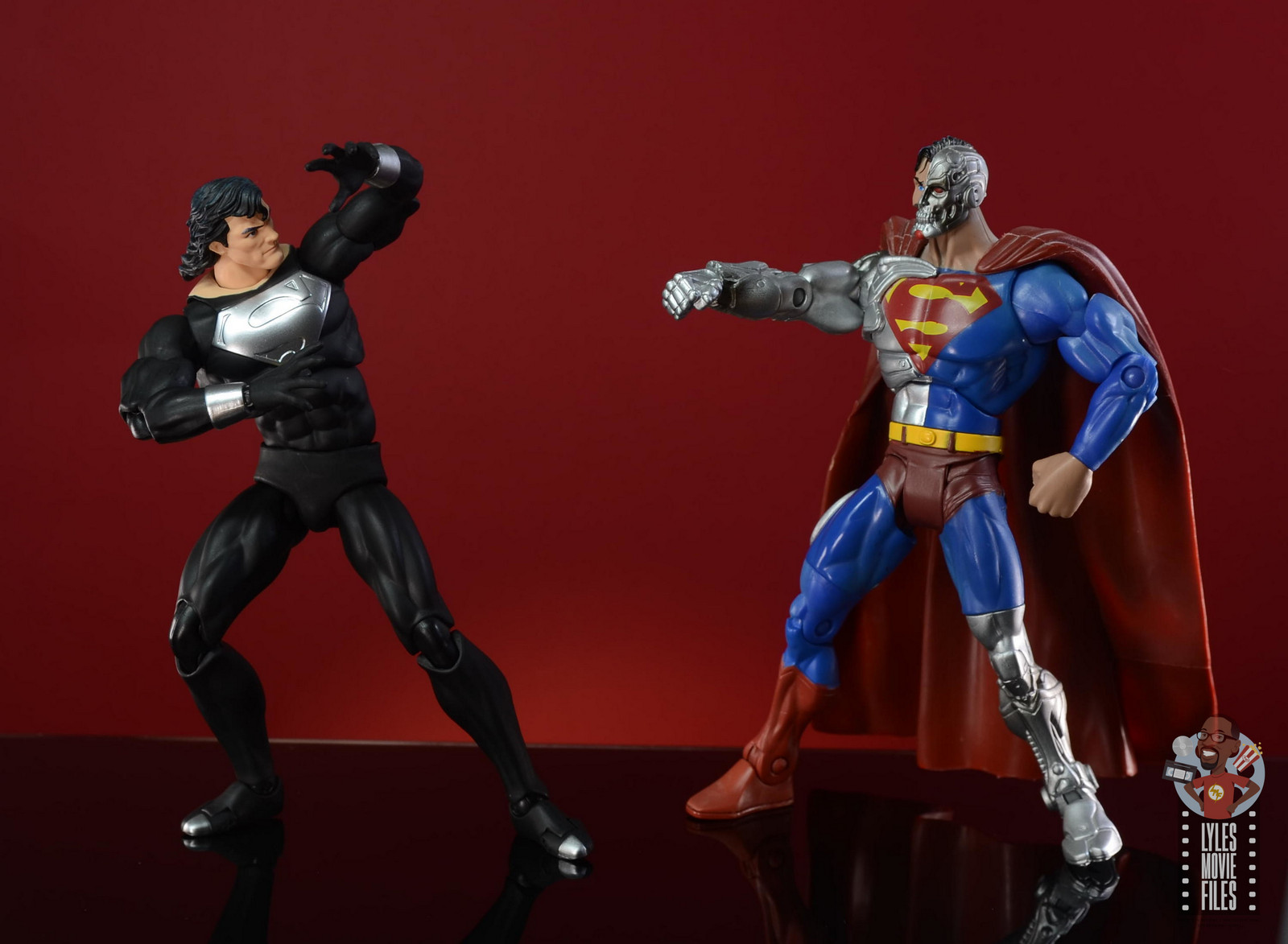 Accessories: As usual, Mafex went with a strong number of accessories that mostly captures all of Superman’s look in the final chapter of ROS. 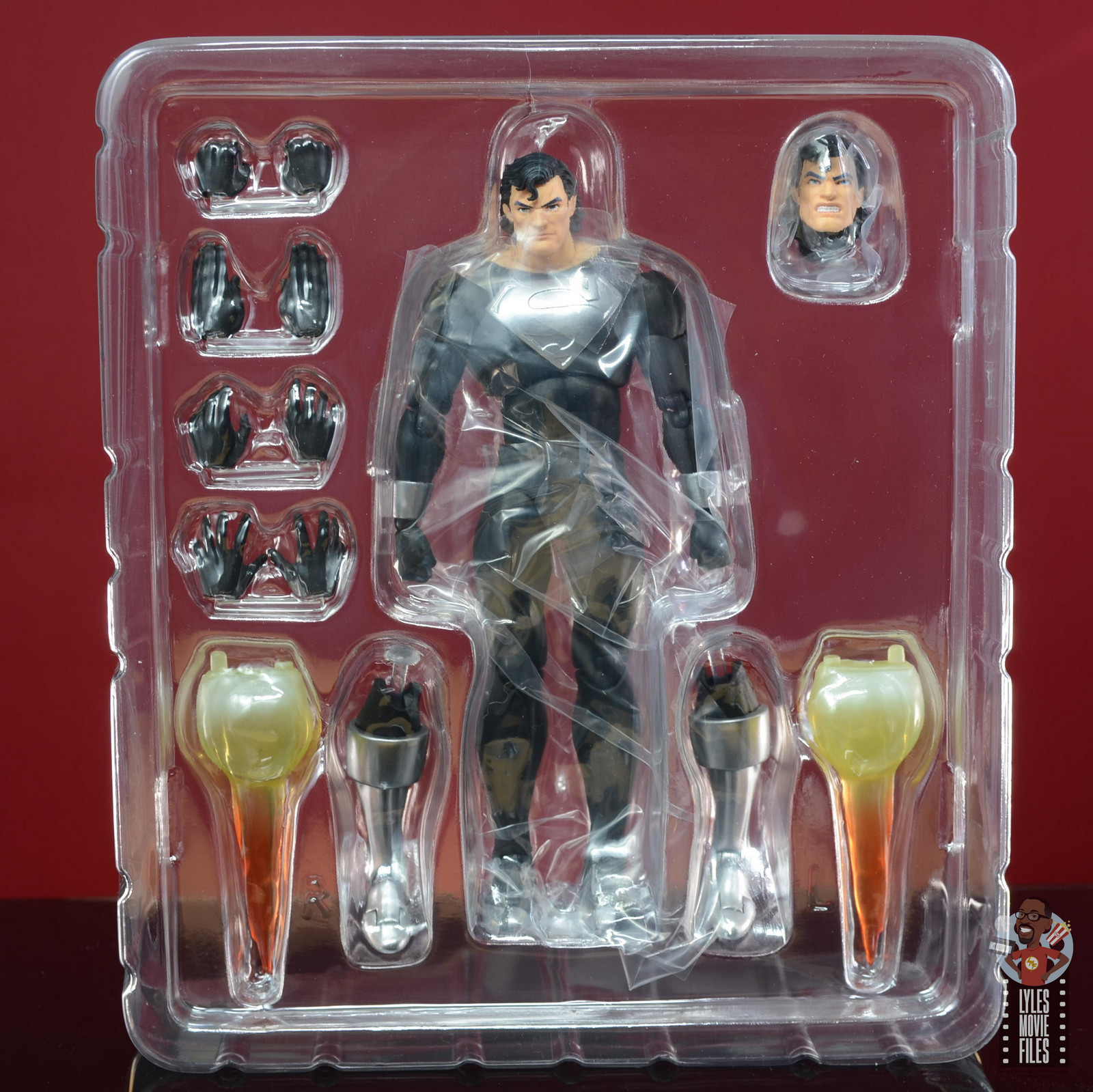 He’s got a fiercer head sculpt for when he’s more intense. 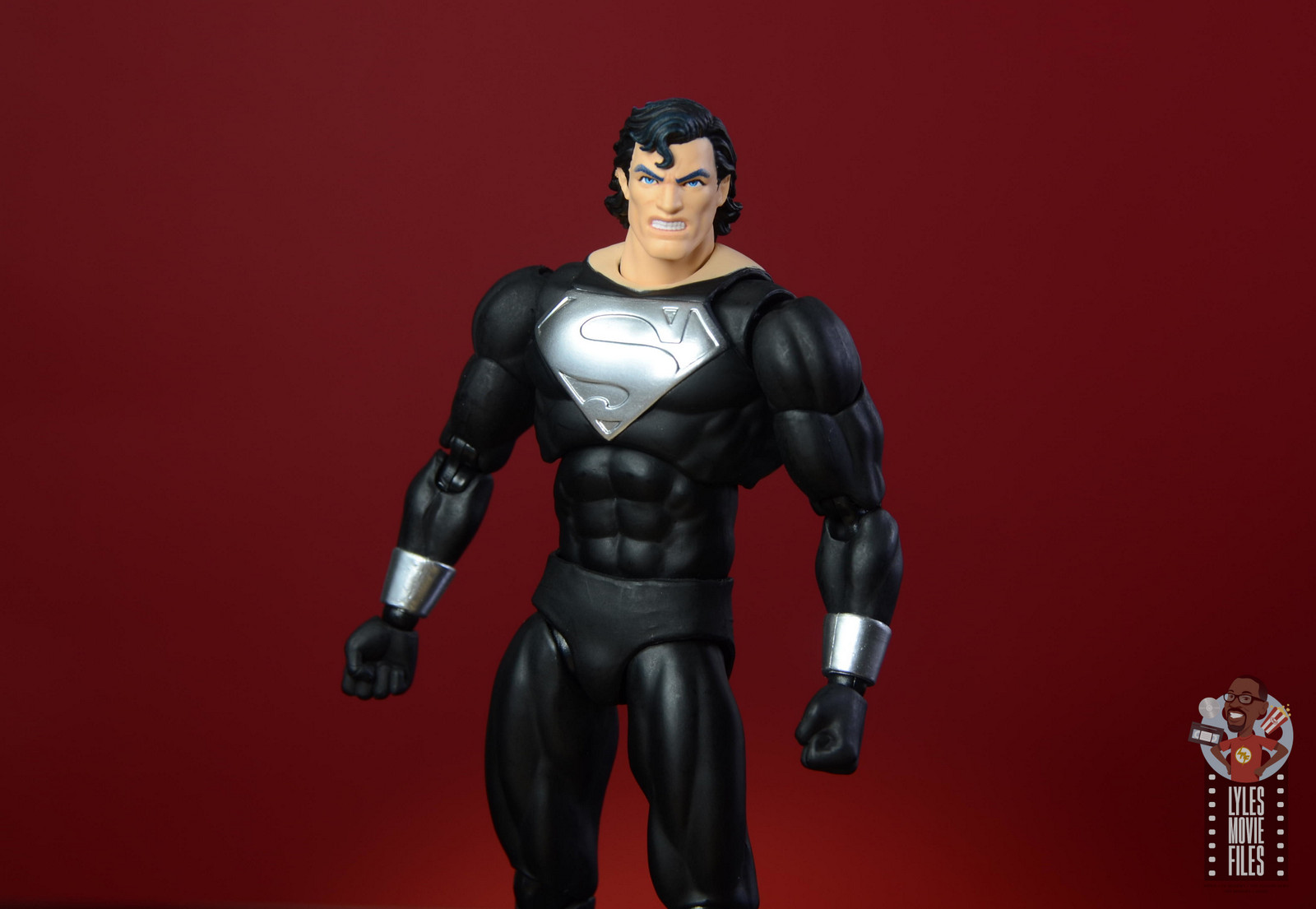 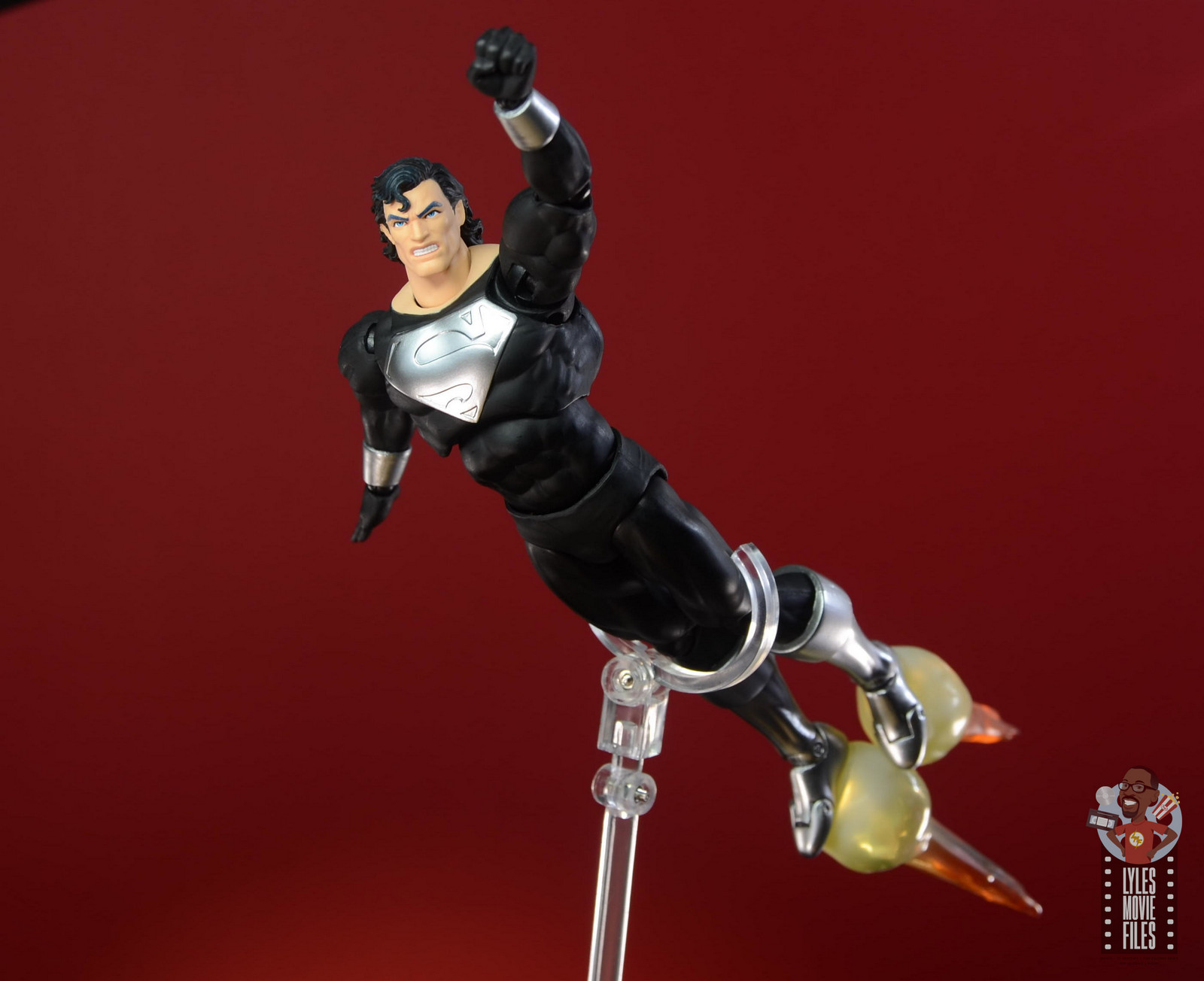 Along the path to Mongul and Cyborg Superman, Superman picked up some jet boots, which are also included. I really appreciate how easy it was to swap the standard shins and the jet pack boots. 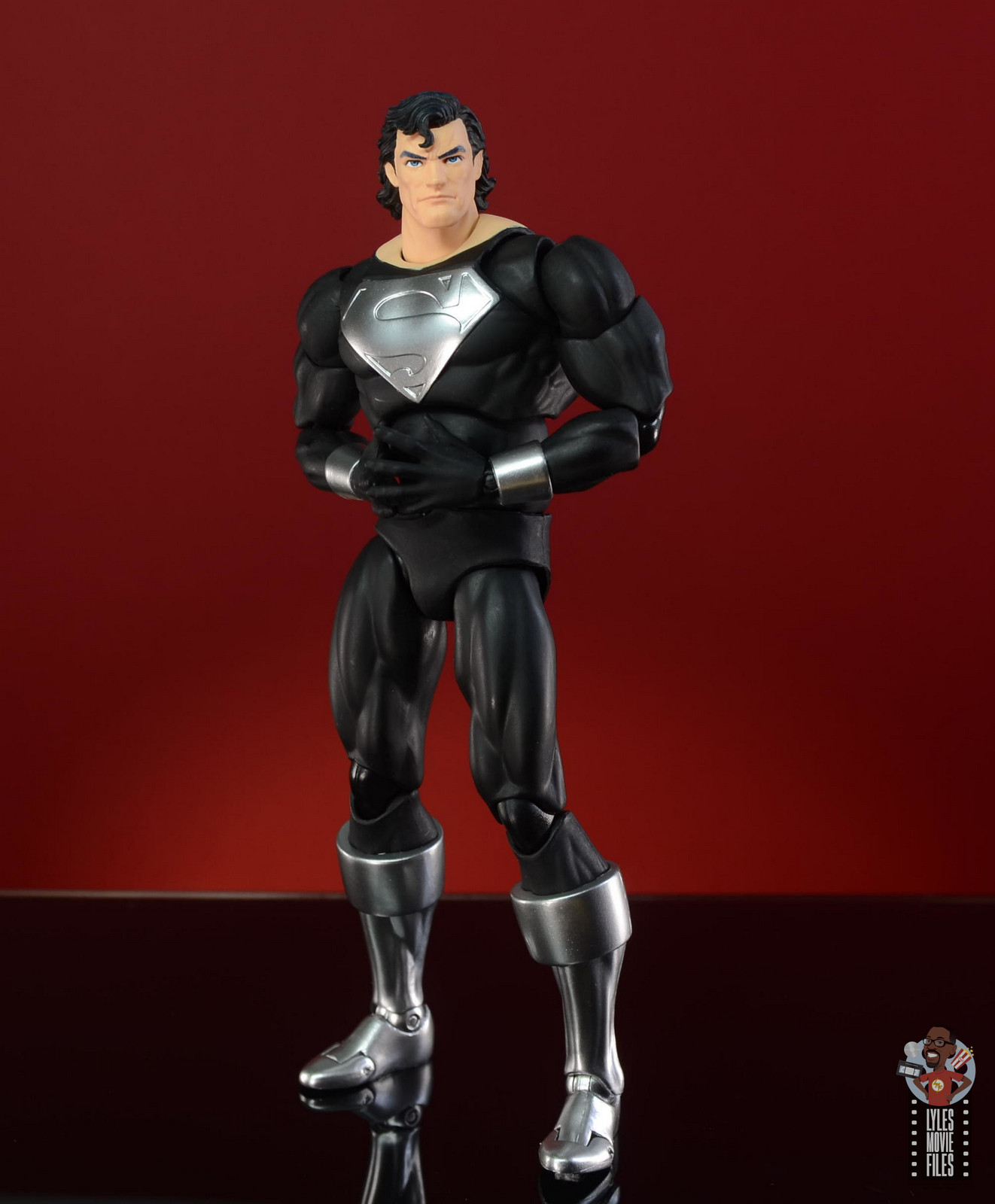 They’ve got a nice sheen of silver and hold the exhaust fumes – cast in a translucent yellow, orange and red nicely. 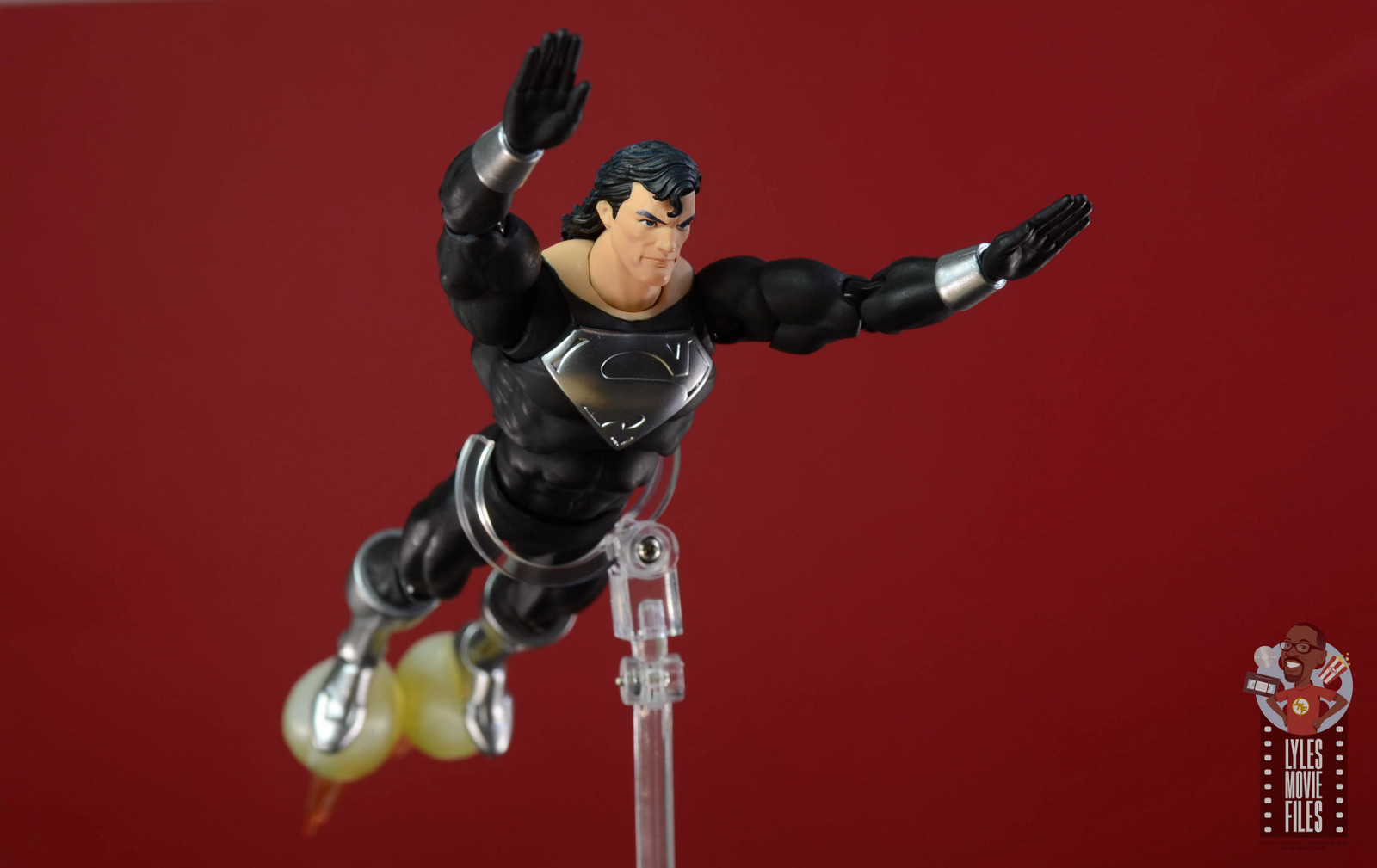 Of course, during this big showdown Superman further geared up with a vest with ammo pouches and big Liefeld style blasters. Since DC is currently on its “no guns for action figures” mandate those are absent, but maybe some Marvel Legends Deadpool blasters would work? 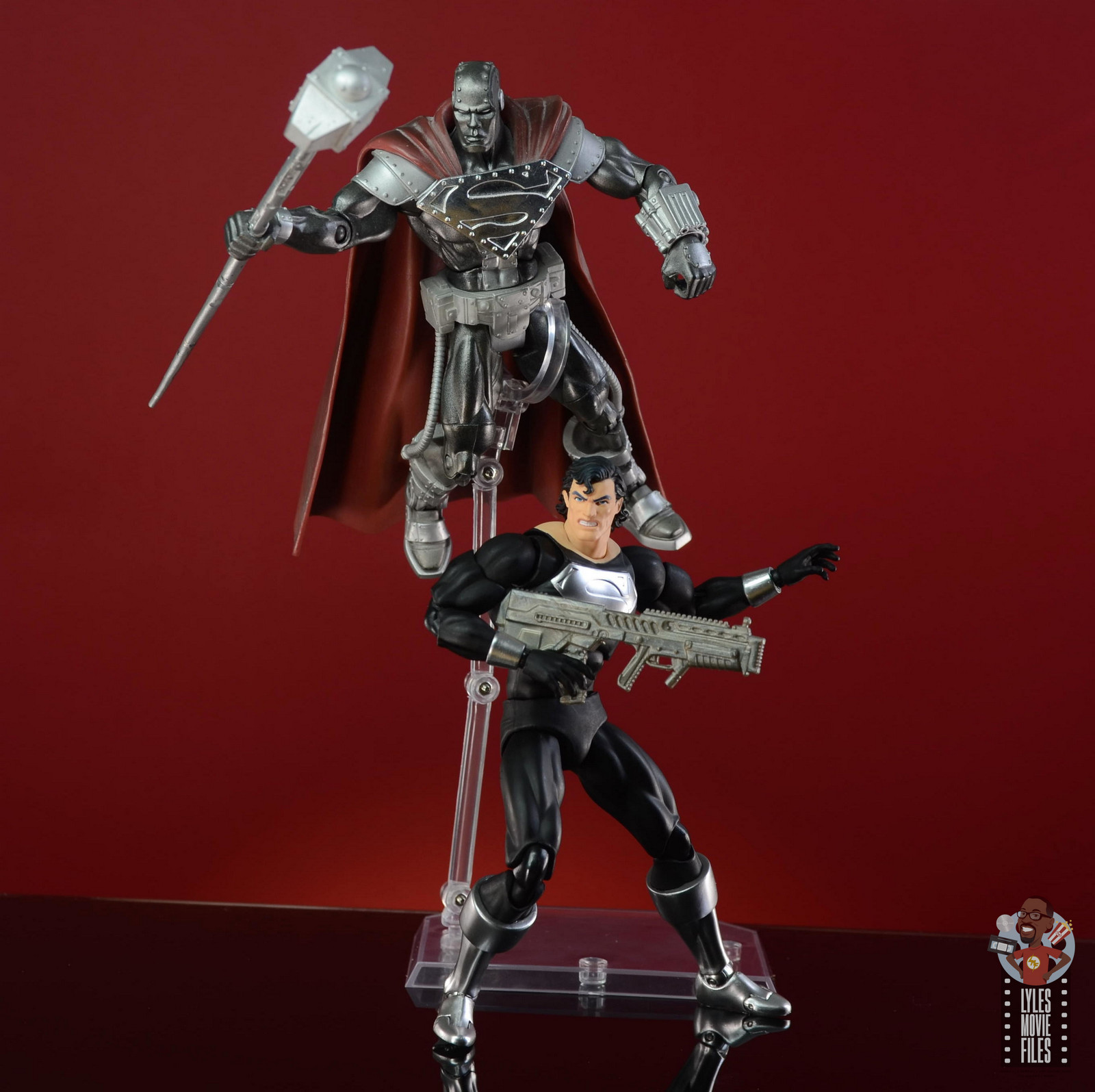 Worth it? You can get Regeneration Suit Superman for just under $100.

He’s not the flashiest figure from this story arc, but it’s nice to have Superman to kick it off with reinforcements on the way. 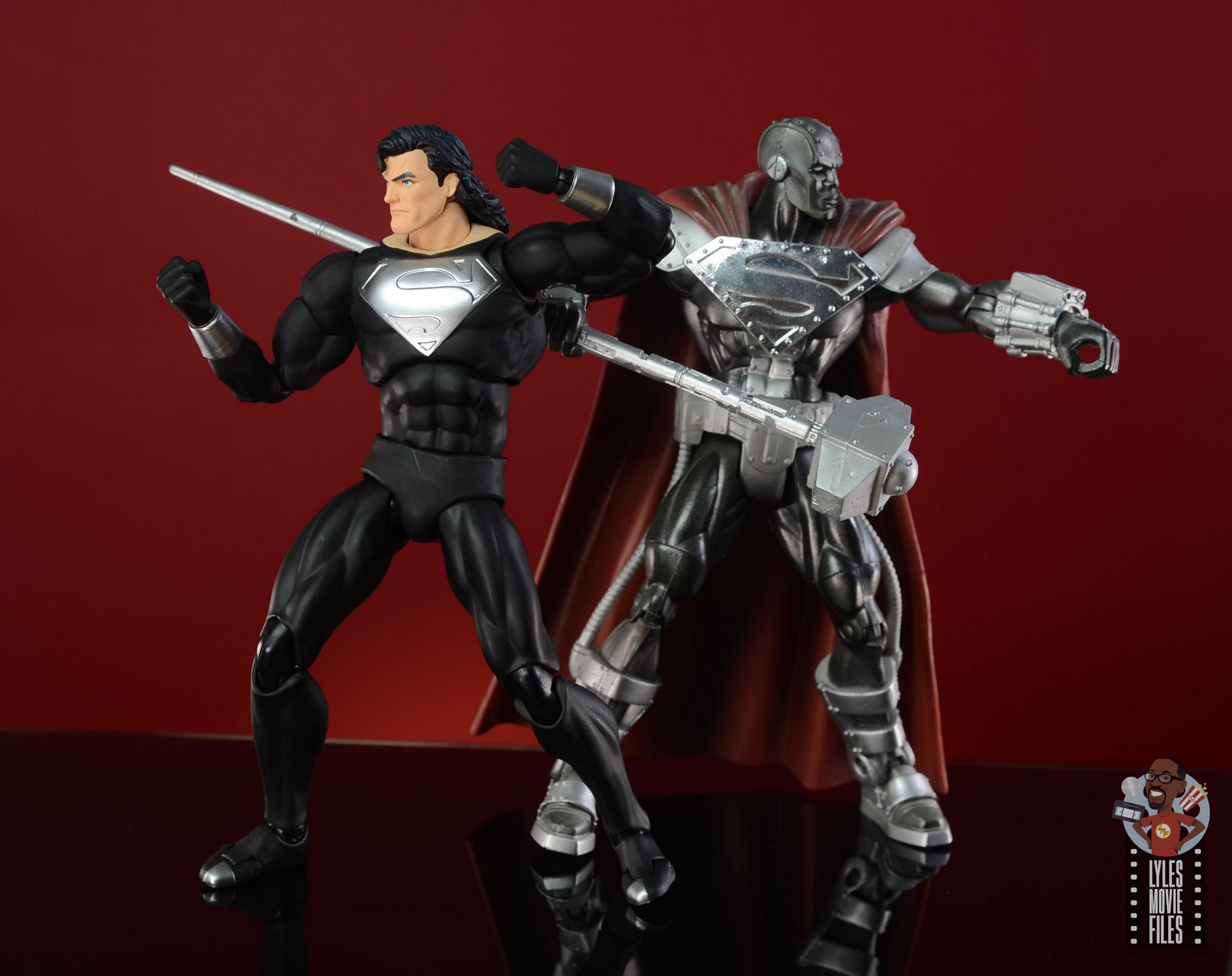 As an Amazon Associate and an Entertainment Earth affiliate, I earn from qualifying purchases.