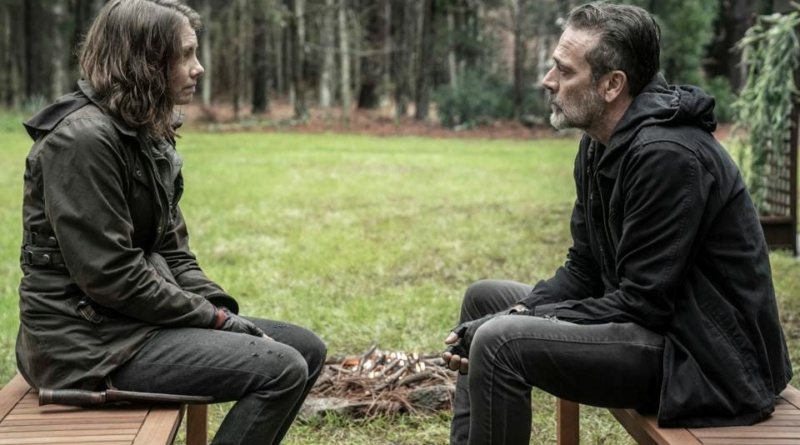 Creatively chaotic is probably the best way to describe The Walking Dead’s finale. Backed into a narrative corner and against all odds, the show stuck the landing (mostly).

Sure, I had some gripes, but the writers showed admirable restraint in not killing off every non-spin-off character. Instead, they went with killing off just one semi-major character. That was the smart move and made the finale far more impactful. Time to break it all down one last time.

There’s a mad scramble to get to the clinic. Daryl has Judith, but the others aren’t far behind.

The commercials discussing the spinoff seem counterproductive as if to remind us of who absolutely won’t get killed.

Hmmn, about that. Jules gets bitten and mobbed while Luke’s leg gets bit. At the clinic they hack off his leg, but he still bleeds out and dies. It sure seems Luke was better off not reuniting with them. Magna, Yumiko, Kelly and Connie cry over their dead pal, but this just doesn’t resonate. Luke hasn’t been around in what feels like 15 episodes. Who cares if he dies now?

Daryl donates some blood to Judith, who does her absolute best to bring some drama as she thinks she sees her parents. Sorry Judith, the show has had its share of younger characters getting killed off, but you’ve got a negative chance of reuniting with your mom — and maybe dad? What’s up Shane? And man, talk about a complicated family tree for Judith, huh?

Mercer’s in the prison, but Princess and Max spring him. This felt like Mercer in jail could have e been a subplot of an entire episode. Instead it plays out in about 45 seconds.

Maggie still doesn’t want Negan’s aid. She does know they’re in a spin-off together, right? Aaron and Lydia walk with the horde to reunite with Ezekiel, Maggie, Negan and company and most of the important players are back.

Rosita (with Gabriel and Eugene) goes full on super soldier in rescuing Coco and Jerry and Ayisha’s baby, but their ride is damaged. They say the 10,000 miles checkup is the most important … The trio climb a pipe and in a weird lack of chivalry, let Rosita go last. Course, Rosita is the more effective fighter, but dudes, she’s got a baby while kicking walker tail!

The walkers pull and grab at Rosita enough to pull her down into the walker mosh pit where she uses Glenn-like abilities in escaping and getting to Gabriel and Eugene.

One of the advanced walkers takes a rock and shatters the clinic glass allowing the walkers to pour in. This season would have been a lot more fun with a dedicated arc for these walkers instead of stretching out the Reavers.

Mercer’s loyalists arrive to rescue the hospital crew, specifically to get Judith to Tomi in a space not overrun by the horde. Now we see why he’s been so key this season. He’s gotta save Judith!

Negan takes the high-powered rifle to take out Pamela. Again, this dude already has an alpha boss (heh) on his ledger. He says he knows how Maggie felt and is so sorry from what he took from Maggie and Herschel. She takes the rifle and asks if he’s coming. I mean yes, I 100% get it Maggie, but geesh Savior Negan and this Negan are pretty much two totally different characters.

Rosita did get bit. This moment with Eugene was really nice although a thousand boos for killing off Rosita.

The walkers are coming and Mercer offers the Alexandria crew a ride out the back since this isn’t their fight or their people. Cool, deuces. Ezekiel rallies the gang to stand with Mercer because heaven forbid, Ezekiel pass up the chance to deliver a stirring and motivating monologue.

Pamela is at the gate watching the carnage as the lower class pleads to be let in. This seems like the ideal moment to check out the fridge in the safe room, Pamela.

Maggie’s got a clean shot, but Mercer and the crew arrive. Mercer and Pamela have a Mace/Palpatine moment where they argue who’s really the traitor. Vickers finally comes to her senses and aligns with Mercer after Daryl of all people says everyone deserves better than this state of affairs.

Gabriel opens the gate and the Commonwealth citizens make it in (including Jerry and Elijah!) before the horde. Mercer has Pamela arrested, which Negan says is worth more than death for her. That’s probably true.

Pamela sees walker Hornsby and it sure seems like we’re about to see Pamela take the comic Carol death treatment. Nope, Maggie kills him and our heroes declare it’s time to take the Commonwealth back.

First up, they need to gather all the walkers in a central place. How about the estates? And a little music to lure them in.  Cult of Personality plays. It’s Clobbering Time! Well, I guess since he’s banished from TNT and TBS, AMC makes sense… 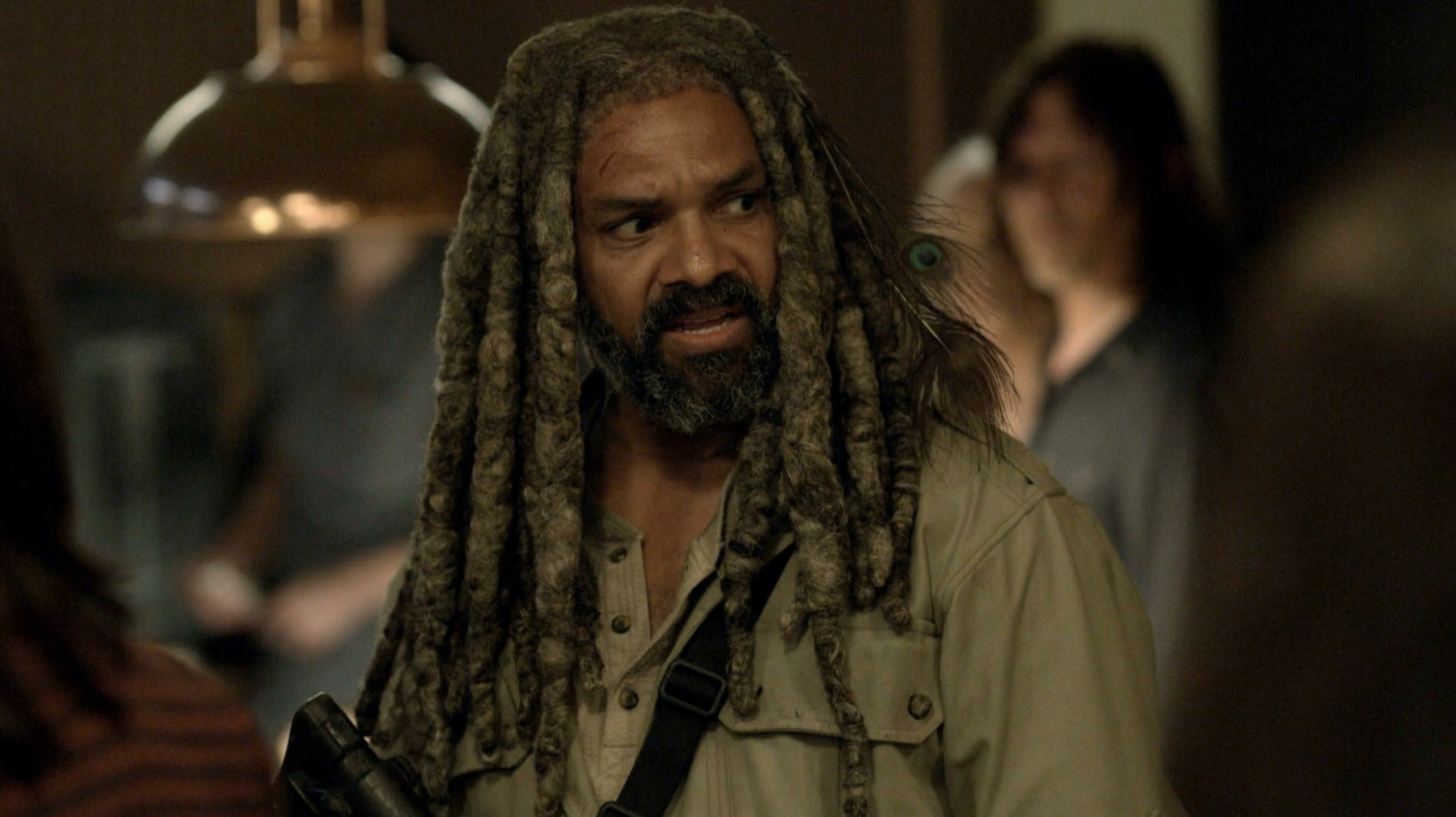 The walkers getting fireballed has to rank pretty high up on the list of most spectacular walker deaths in the series. Also, these commercials with walker Andrea are pretty funny and the most likable she’s been since season 2?

With the walkers defeated it’s time for an extended epilogue that Peter Jackson might question is too long.

Negan burns his whisperer mask. Andrea thanks Negan, but she can’t forgive him and just doesn’t want to hate him anymore. It’s a great scene between two of the series’ best characters, but I kept wondering why Annie was absent all episode.

Time for a Thanksgiving dinner victory celebration. Toast to Luke, but not Jules? Well, we hardly knew you. Rosita is taking in everything and in a nice, understated manner tells Gabriel what she already told her walker killer work husband Eugene. Judith understands what’s happening and all that’s left now is a quiet farewell to Rosita. Thankfully, we avoid seeing Rosita turn and getting the mercy knife stab to the head.

One Year Later we find out what happened with Batman, Superman and Wonder Woman and the identity of Supernova. Wait, wrong event. The Commonwealth has been fully restored. The fate of Alexandria and Oceanside? Not as clear. Ezekiel is the new governor and Mercer is the Lt. Gov. I can back that ticket.

Daryl’s been out on the frontier, but Maggie proposes it’s time to find out what all is out there in this big wide world. Morgan, Madison and a whole other squad of locusts on Fear the Walking Dead? Carol and Daryl have one final moment, which almost seems like one last pitch to get Carol on the spin-off.

Ending the show on the guy with a spin-off certainly was a choice. Or not. Michonne and Rick are writing letters. Him, to Michonne and her to Judith and RJ. Hopefully, a year later the postal service has improved because it was already shaky pre-world getting overrun by walkers.

Course the timeline isn’t quite matching up as we see Rick dropping off the bag Michonne discovered in one of her final appearances before leaving her kids and community behind (see also filming Black Panther: Wakanda Forever).

We get a nice montage of all the even remotely important characters (Bob! but also Sasha, Abraham, Tyrese and Caaaarl) as Rick and Michonne both end their monologues with the message they imparted to Judith — we’re the ones who live — unless we missed the spin-off sign-up sheet.