Hank Pym is about to become irrelevant for all intents and purposes in Marvel comics. That’s what happens when you’re relegated to background support status in Marvel movies no matter how many decades you’ve been around.

Hank Pym is on his way to comic irrelevance. With ‘Ant-Man’s‘ debut at theaters this weekend, Pym — the original Ant-Man/co-founder of the Avengers — has been relegated to a support staff role. The rumor is Pym’s background of mental illness and his sadly career-defining moment of striking The Wasp right before having a breakdown cost him the starring role, but it shouldn’t have especially when you consider some of the sins of Pym’s fellow heroes — ironically many of whom are already starring in movies and TV shows.

To backtrack a bit, Pym was becoming a fascinating character. No longer just the size-changing jobber of The Avengers he had some depth to him in no small part due to his mental issues that were putting him on the verge of a breakdown when his infamous moment occurred.

Jim Shooter, the writer of the story, wrote a blog post about it:

In that story (issue 213, I think), there is a scene in which Hank is supposed to have accidentally struck Jan while throwing his hands up in despair and frustration—making a sort of “get away from me” gesture while not looking at her.  Bob Hall, who had been taught by John Buscema to always go for the most extreme action, turned that into a right cross!  There was no time to have it redrawn, which, to this day has caused the tragic story of Hank Pym to be known as the “wife-beater” story.

And it’s a shame as Hank’s struggles to becoming a hero — dealing with his depression and feelings of inadequacy — could be much more inspiring than most of the Marvel and DC characters we’ve seen so far on the big screen.

And the thing is, most heroes who’ve been around for any reasonable amount of time have a few skeletons in their closet that are decidedly not family-friendly. So I present to you ladies and gentlemen of the jury Some just as bad or worse than ‘ol Hank Pym. Ironically, most of them have already been featured in movies. 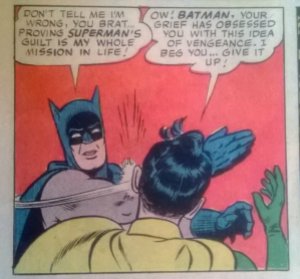 Ok, in all fairness this was an alternate Earth Batman who slapped his sidekick Robin. On this other Earth, Bruce Wayne becomes Batman as he thinks Superboy led to his father’s death. Now a grown man, Batman is ready to battle the now-adult Superman. Robin calls him out on his obsession leading to the Internet’s favorite meme comic fodder.

Ma Gnuci: it’s what for dinner

It’s odd how a character can do some crazy stuff and people are fine with it as long as it fits with the character. The Punisher had some serious beef with the Gnucci mob family and its matriarch Ma Gnucci. After a series of encounters, Ma and Punisher come face to face at a zoo and Punisher promptly tosses her into a polar bear sanctuary where she gets her legs and arms munched off. Somehow she managed to survive and vows revenge. Punisher storms her mansion and sits her in a chair before engulfing it in flames. Ma Gnucci still has enough fight left to dive out a window only for Punisher to kick her back in to the flames to her death. [Read here: Punisher: Welcome Back, Frank

When the Cyborg Superman bombs Green Lantern’s hometown, Coast City, (as seen in the classic The Return of Superman

) and obliterates everyone and everything on it, Hal Jordan cracks and seeks the ultimate power to resurrect Coast City and its inhabitants. The Guardians don’t take kindly to Hal abusing his power and sic the Green Lantern Corps after him. After Hal finishes them off, the Guardians get desperate and resurrect Sinestro, whom Hal kills as well as his close friend Kilowog. Hal managed to accomplish what no other villain had — he successfully destroyed the Green Lantern Corps and dooming countless millions that no longer had a Green Lantern to protect its sectors. No wonder Batman finds it so hard to trust him to this day…

Green Arrow has no patience for drug addicts

Green Arrow has always lived in Batman’s shadow to some extent from his own doing with gimmicks like the Arrow Cave, Arrowcar and the obligatory pre-teen sidekick, Speedy (Roy Harper). Unlike Batman though, Arrow was a pretty crappy mentor and worse detective as he completely missed that Speedy had become a drug addict. Even worse, upon learning the news, Arrow wanted nothing to do with him and kicked him to the curb, but not before punching him. While probably more human than most heroes, Arrow sure does come off looking like a world class jerk here. [Read here: Green Lantern/Green Arrow

During The Clone Saga, Peter Parker gets a bit upset that his whole life was a lie and in a fit of rage he — in true Hank Pym fashion — accidentally pushes/slaps/punches his wife, Mary Jane. While Hank is a normal guy, Peter has the proportional strength of a spider so that would do a lot more damage. Did I mention MJ was pregnant at the time?

Spider-Man makes a deal with the devil

Geesh Spidey, you again?? With his beloved Aunt May’s life hanging by a thread, Peter Parker literally makes a deal with the devil to save her agreeing to forfeit his marriage to Mary Jane in order to save Aunt May. You could kinda make an argument for most of these incidents on the list, but this one is my least favorite. It’s such a terrible morale and there’s no way you can put a positive spin on agreeing to a plan with the devil. 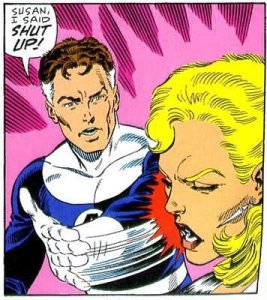 With his wife, Sue, influenced by the emotion-manipulating Psycho Man, Reed Richards gets desperate and concludes the only way he can stop Sue from killing the rest of the Fantastic Four is by rattling her emotions. When that doesn’t quite get the job done, Reed delivers the finishing touch — a slap across the face. You know, the same thing Hank did, but somehow Reed has avoided getting painted as an abuser.

In the infamous ‘The Crossing’ storyline, Marvel writers tried to sell readers that Iron Man had been an unwitting sleeper agent placed by Kang to be triggered at the Avengers’ most vulnerable moment. Tony Stark starts off killing the Avengers’ nanny and fellow Avenger Yellowjacket II (Rita Demara). Apparently killing women is OK if you’re under evil influences? [Read here: Avengers: The Crossing

Superman killing Phantom Zone criminals wasn’t a controversial plot device originally used in ‘Man of Steel.’ Decades ago, Superman was faced with the difficult decision to prevent General Zod, Quex-Ul and Zaora from running amok on Earth after they killed five billion people in an alternate Earth) and unleashed Kryptonite to kill them. There’s little chance the Phantom Zone criminals wouldn’t have done the same thing and Superman didn’t wait around until they started racking up a body count on his Earth, but geesh, it’s not a good look for the hero of heroes. 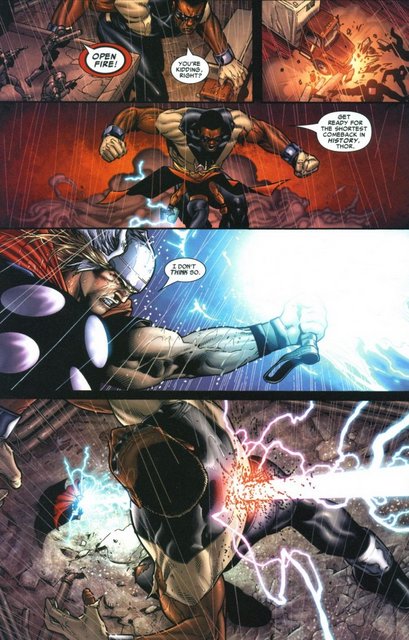 And finally, an offense so bad it needed some of the greatest offenders to do it. During ‘Civil War,’ Captain America’s renegade forces were proving to be far more problematic than Iron Man and his crew figured. To tip the scales back in their favor, Reed Richards, Tony Stark and yes, our old pal, Hank Pym used DNA samples to make a clone of Thor, which promptly went crazy on the battlefield and killed Bill Foster aka Black Goliath.

And for me, killing one of the few well-written black Marvel superheroes is definitely cause to get on this list. It was so bad that serial offender Peter Parker had this question for Hank:

So whose offense ranks the worse to you and isn’t it time we give Hank Pym a break?