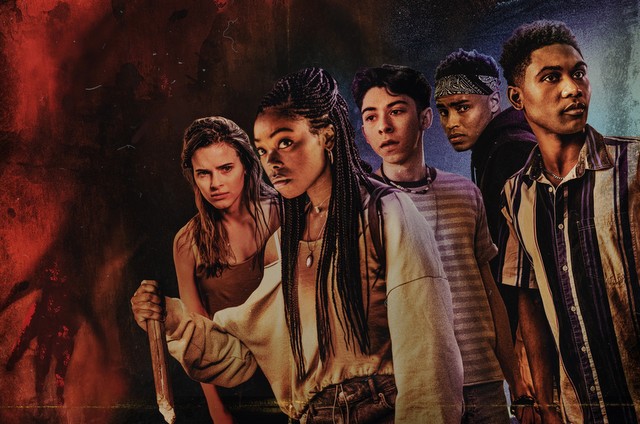 Black as Night is a helpful reminder that horror films don’t need a slew of fancy effects and over the top gore to be entertaining. Sometimes going the simple route is the best and smartest approach.

Shawna (Asjha Cooper, All-American) was all set to enjoy a carefree summer hanging with her BFF Pedro (Fabrizio Guido) when vampires descend on New Orleans. They’re not after high schoolers, but instead are targeting the homeless and drug-addicted population as they’re the least likely to be missed.

When a vampire attacks her mother, it’s personal for Shawna. She vows to do whatever it takes to find and kill the vampire responsible. Pedro very reluctantly agrees to go along with Shawna’s wild plan and they eventually recruit her crush, Chris (Mason Beauchamp) and the local teen vampire expert Grania (Abbie Gayle).

Chris has a secret he’s withholding about his personal…(ahem) stake in wanting to get payback on the vampires. Grania is excited to be around people who want to do more than discuss the Twilight novels.

Grania proves useful with her extensive vampire knowledge and providing a character that’s actually thrilled about encountering the undead.

The premise doesn’t need to be too complicated as screenwriter Sherman Payne (Charm City Kings) saves the nuance and layers for subplots.

Easily the biggest is how the disenfranchised are treated. Discarded and dropped whenever it’s time for a new gentrification project with coded words like mixed-use, the previous population is barely regarded. In a savvy bit of casting, Keith David is the one to voice these issues as a charismatic activist trying to rally around a dilapidated apartment complex.

Payne also uses this horror movie backdrop as an interesting launch point to discuss colorism in the black community with Shawna questioning her beauty since she’s a darker hue. Maybe Payne’s biggest misstep is having Shawna’s brother (Frankie Smith) compare her skin tone to Wesley Snipes, an actor that probably wouldn’t be the frame of reference for teenagers in 2021. 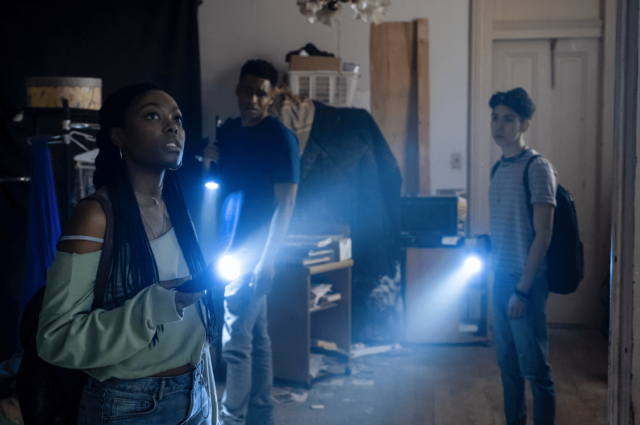 The vampire aspect is somewhat secondary. They’re terrifying, but the forces that led to their creation are even more insidious.

Director Maritte Lee Go doesn’t have a massive budget to work with, but stages the film so it doesn’t look cheap. Sets are sparse and lighting is occasionally spotty on the cast yet it’s perfectly acceptable in the framework of a horror movie. Lee Go doesn’t take shortcuts, which helps it avoid the lower-budget horror film feel.

Fittingly, the bulk of the special effects — both practical and with a little CGI is devoted to the vampires and their deaths.

The cast is more than credible, which helps make their characters engaging and likable. Cooper and Guido in particular stand out and make for believable best friends. As an LGBTQ+ character, Pedro invites the ‘bury your gays’ trope, but in a smaller cast everyone should be fair game and there’s no equity in protecting characters.

Black as Night proves to be a very effective horror thriller that’s got more on its mind than blood and guts while sinking its teeth into colorism and the disenfranchised.

As the one chapter of the 2021 installment of the Welcome to Blumhouse collection, Black as Night gets October off to a very solid start. Horror fans should definitely add this one to their Amazon Prime queue.

Check out Black as Night now on Amazon Prime.